Creatures on the Loose featuring Thongor #29 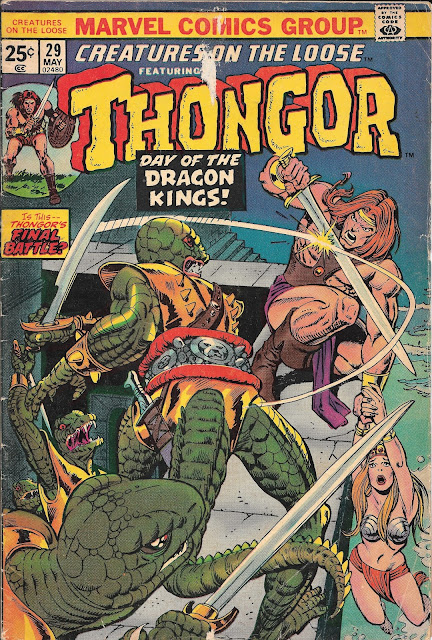 What a find this was in the fifty-cent bin. Sure, the book is kind of trashed, as you can tell from the torn cover and as I discovered trying to turn each page only to find them stuck together at the bottom edge. BUT, here sits a book I didn’t even know existed: a Steve Gerber adaptation of Lin Carter’s The Wizard of Lemuria done by Marvel in the mid-70’s. Neat find, Crapbox!

Lin Carter was one of the background heroes of my childhood. By that I mean that he helped promote and establish a bunch of fandoms that I carry forward to this day. Two of the best examples would be Cthulhu and Conan.

Carter held a fandom for H. P. Lovecraft too, yet his was so great that it inspired him to create his own fantasy fanzine titled Kadath after Lovecraft’s fictional setting. And while only one issue appeared, it contained Carter’s own Cthulhu Mythos story “The City of the Pillars”. Carter would go on to create many of his own pastiches of Lovecraft’s works, some collected in the Chaosium volume the Xothic Legend Cycle and some still at large in various volumes and anthologies. He also collaborated posthumously with Clark Ashton Smith on several more mythos tales, expanding on stories and ideas by the prior author.

Carter worked in collaboration with L. Sprague de Camp to shore up the Conan mythos of Robert E. Howard. The pair completed a number of unfinished tales of both Conan and Kull that were started by Howard in their posthumous collaborations. I remember the pair’s names staring out of the Conan book’s covers quite distinctly, while on the pages inside the duo tried to create a workable timeline from the various Howard tales with bits of stories and introductions of tales that bridged Conan’s adventures into a larger tapestry, many of them quite good.

Carter did all this and more. He wrote books and short stories by the scads. He edited tales in anthology series such as Flashing Swords!, Year’s Best Fantasy Stories, Ballantine Adult Fantasy and Weird Tales books. He dabbled in non-fiction, writing biographies of HP Lovecraft and Tolkien. He even dabbled in creating hobby games. I feel a kinship with Carter, as his loves mirror many of my own.

Some of his best-known work outside of expanding the stories of Howard or Lovecraft, were his tales of the lost continent of Lemuria. Popularly thought of as a landmass that existed between Madagascar, South India and Australia, the prehistoric Lemuria was, for Carter, the dwelling place of evil serpent people who wish to enslave the newly evolved mankind. The constant thorn in their side was Thongor, who seeks to unite the trapes of humans into a single empire and overthrow the “dragon kings.” 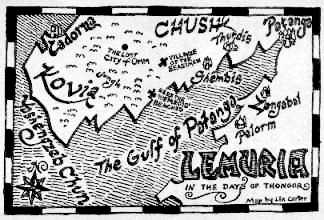 I’ve never read these, but not because I didn’t want to. More from my inability to find copies of them. Carter writes great pulp-fantasy and these novels sound like they would be a blast to read. Luckily, I’ve got the next best thing in my hot little hands. The only drawback here is that this was to be the last issue of Creatures on the Loose and it wraps up the adaptation of Wizard of Lemuria. I have no idea if it follows the book or not, or if the series’ impending cancellation lead Gerber to shortcut the story’s end. Let’s judge it based on the pages it contains and go from there, shall we?...

We jump right into the action as our hero, Thongor of Valkarth, is being carried off by a massive flying lizard beast known as a Lizard-Hawk. Appears he was abducted off the Mountain of Thunder by the creature in our last issue and is now being carried far off from his friends. 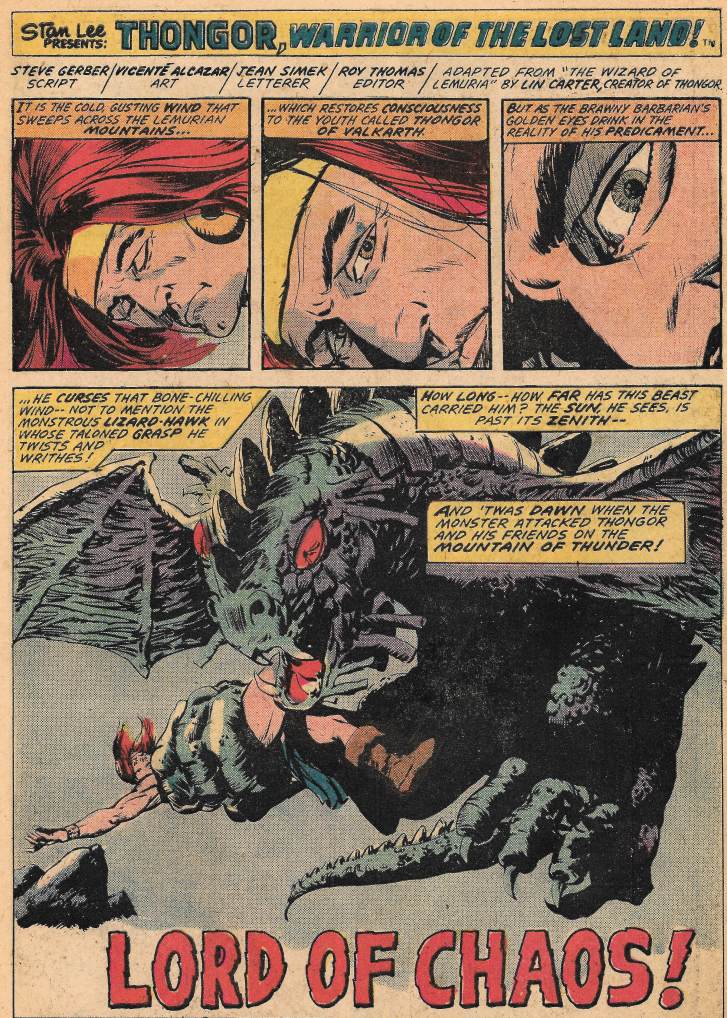 Of course, our hero can break the beast's taloned grip... 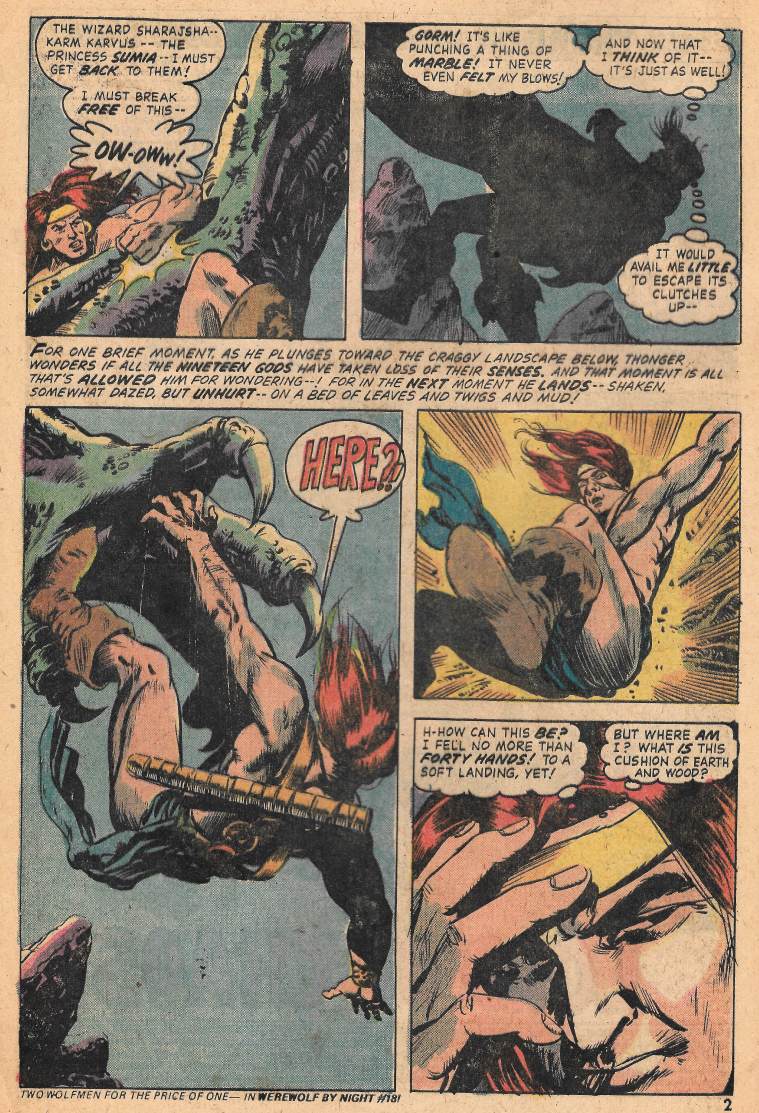 And as Thongor finds his way free and back to solid Earth, he discovers that doesn’t necessarily make him “on the ground”… 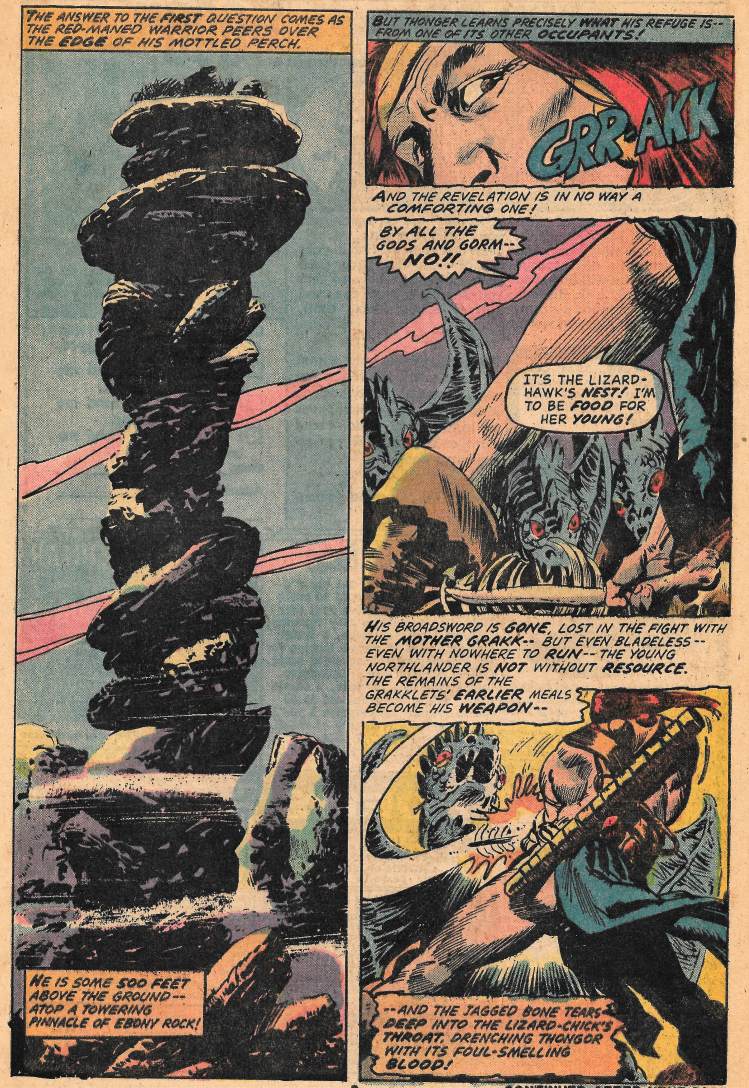 Hey now! I don’t know if I can endorse a barbarian fighting “chicks”. Well, maybe just this once. 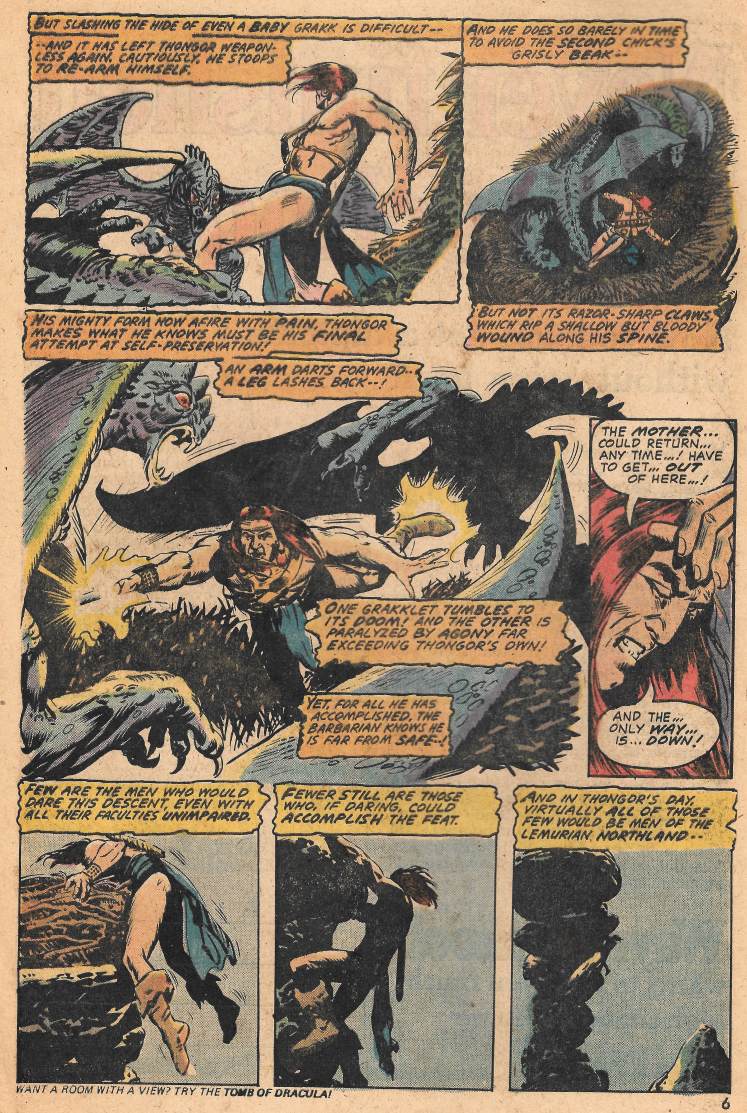 By the time this battle is over, Thongor victorious then beginning his descent and the dead Lizard-Hawk chick carcass’ cooling that I can state that the feel of this is much like the feel of Marvel’s Conan book at the time. Enjoyable, fun sword-swinging fantasy with an easy to root for good guy whose physical prowess exceed whatever is thrown at him. Okay, I can check my brain at the door for that.

Yet the other parts of the issue give us an extended cast of characters that appear more like the John Carter, Warlord of Mars stuff. I can get down with that too. Even with the magical flying airship Nemedis, which looks like it sailed in from a Skylanders game. 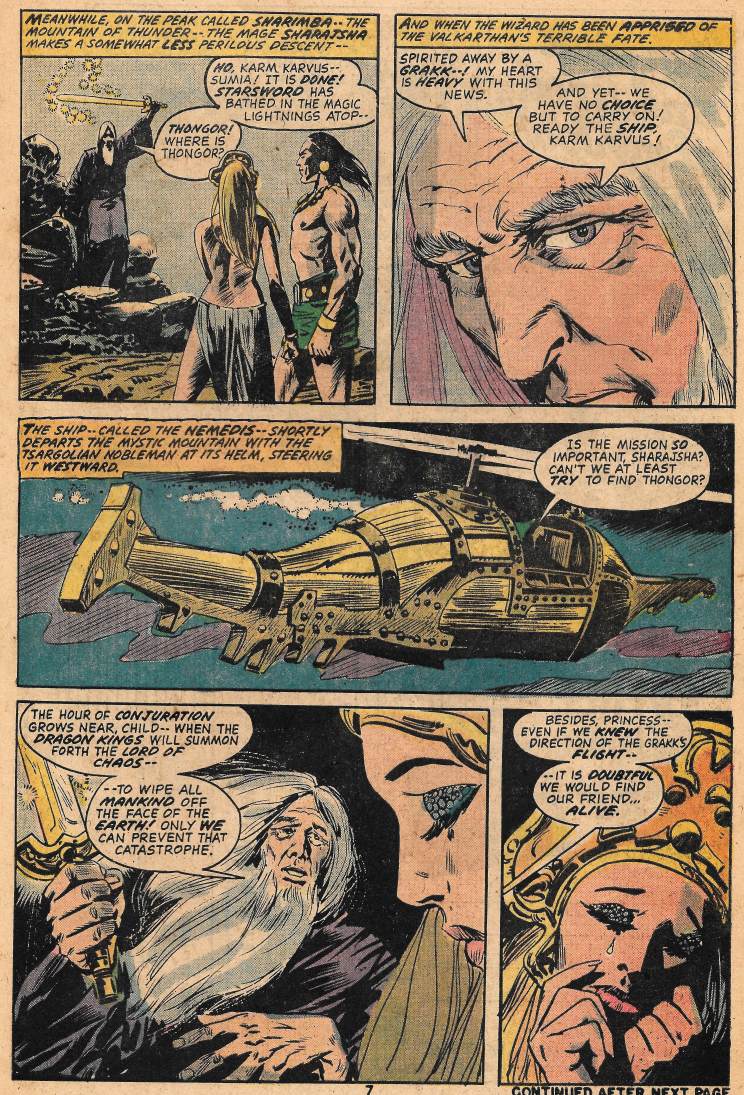 And the fact that we have a clear objective (stop the evil Dragon Kings from doing the thing that releases the Lord of Chaos and destroys all humankind) and an object (glowing Starsword weapon/flashlight in its post magical-lightning bath phase) that will supposedly do just that, means we have a basic understandable plot. We’ve gotta get the thing to the place to stop the bad thing the bad people are doing so worst thing doesn’t happen. Check! 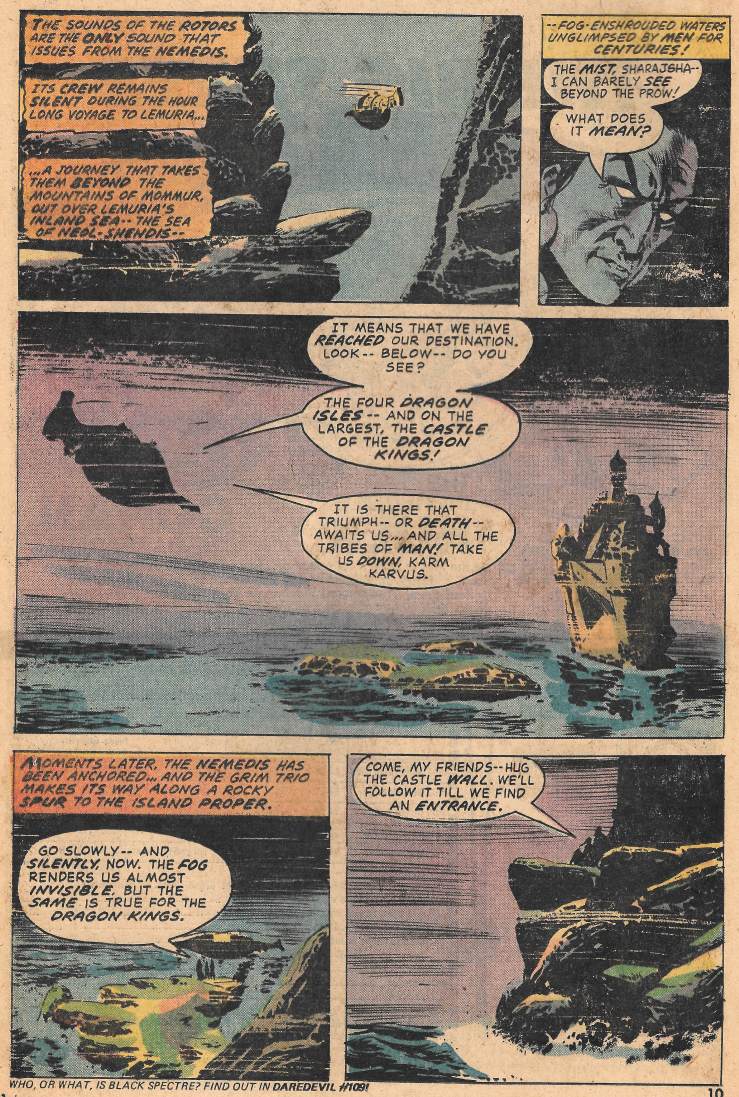 I even like the heightened tension of not having our uber-hero be a part of this initial assault on the Dragon-King’s castle. Creep quietly, hero helpers! Don’t become lizardman targets. The old art style and odd colorations actually assist this issue in creating a moody look and feel. I’m so glad for old comics like this showing that with limitations, sometimes art can be even more beautiful.

And as out trio wander blindly into an ambush… 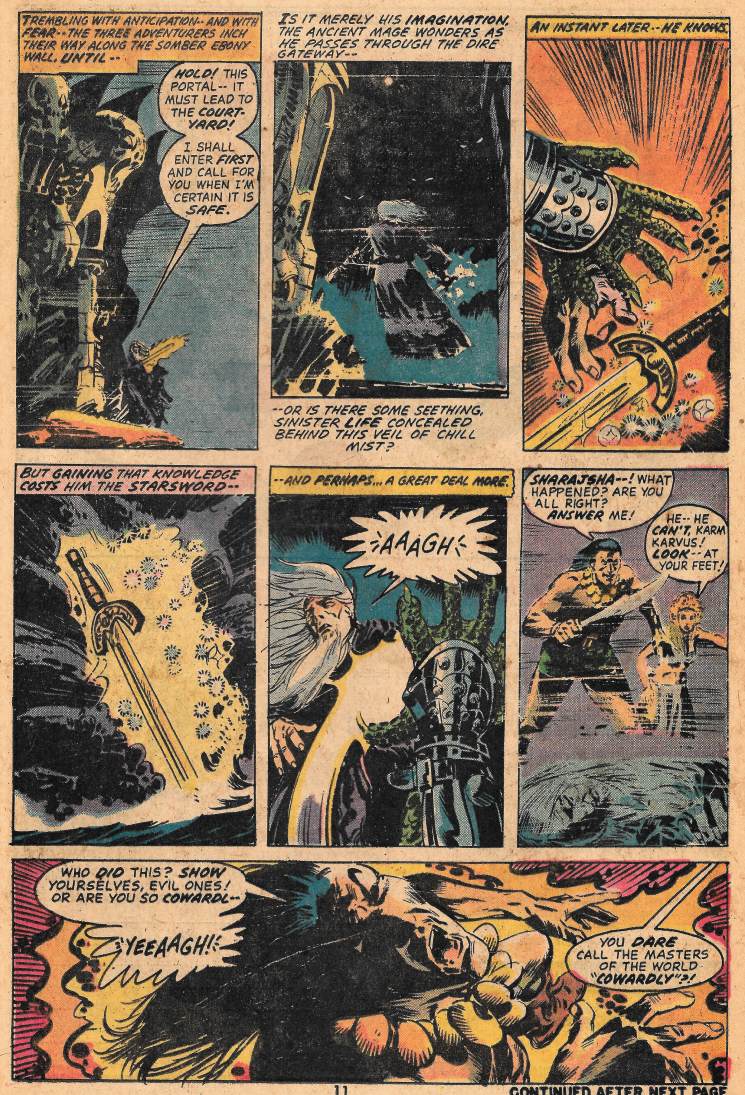 …we get to meet the Dragon-Kings first hand. I dig all of this but SSAAA’s face, which could have used either a touch less inking or a touch more pencil-work. Anyway, our good-guy troop is all caught and about to be sacrificed except for… 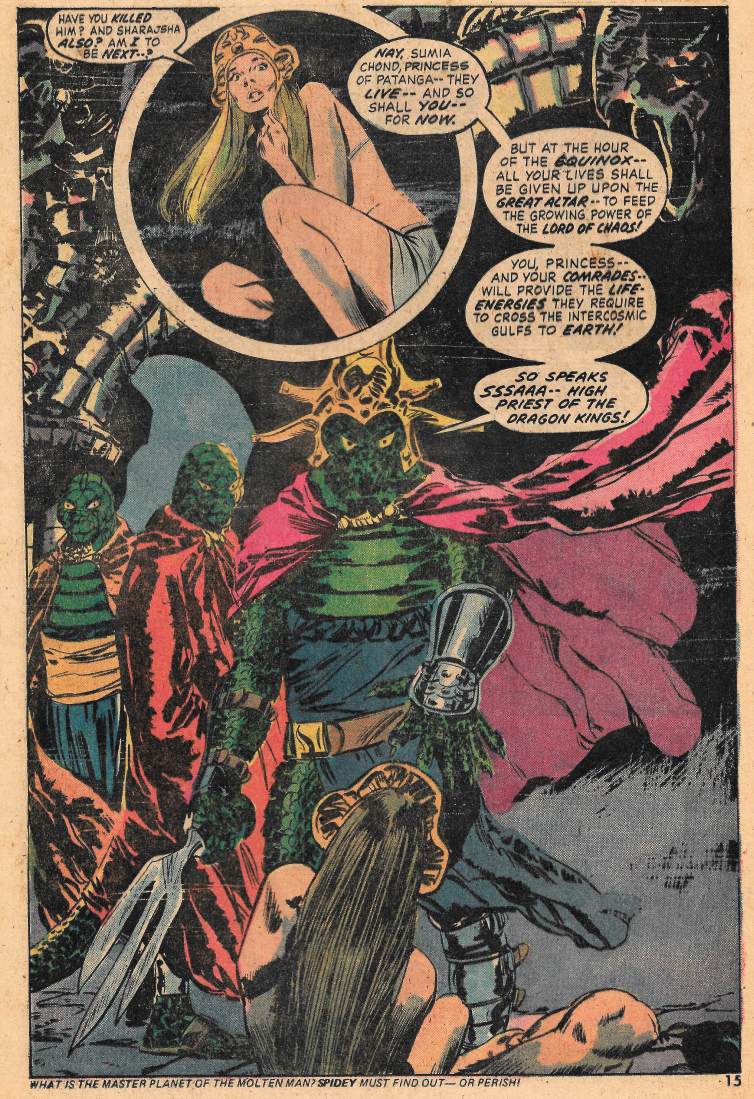 Thongor, who jumps in a river and ends up washed right up near the shores of the isle his companions are on. Convenient! 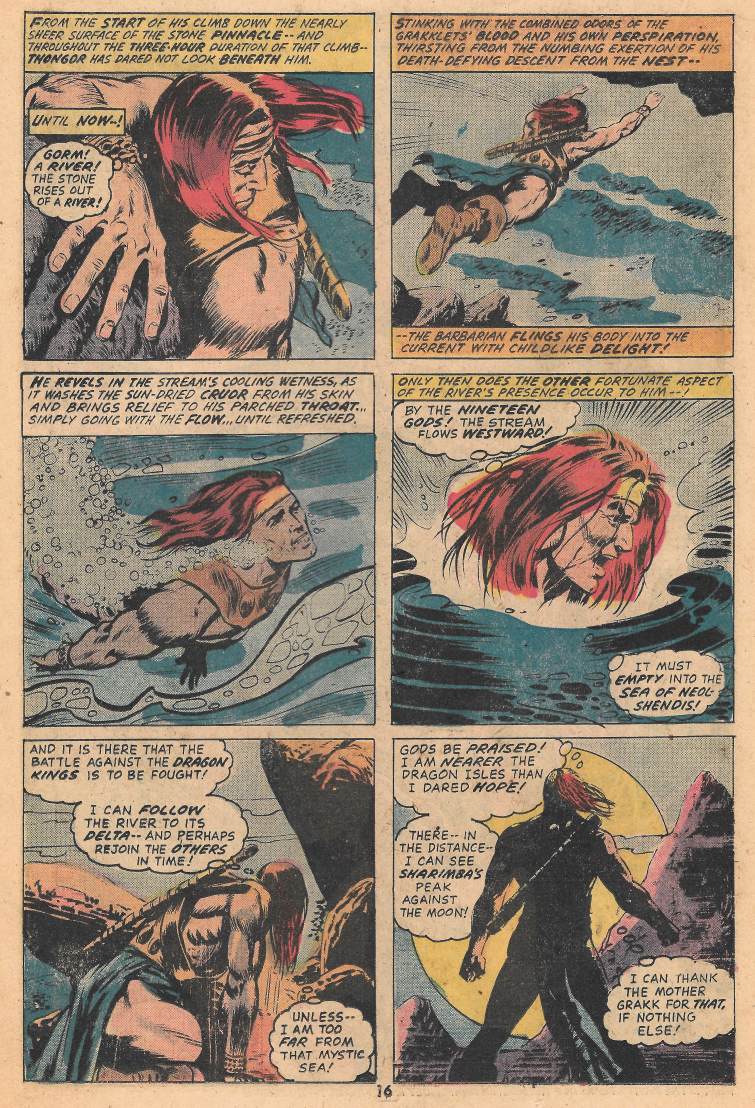 Realizing this might be a bit too easy on our hero, Gerber conjures up a giant biceratops (what else do you call a two-horned triceratops?) to give the barbarian a run for his money. 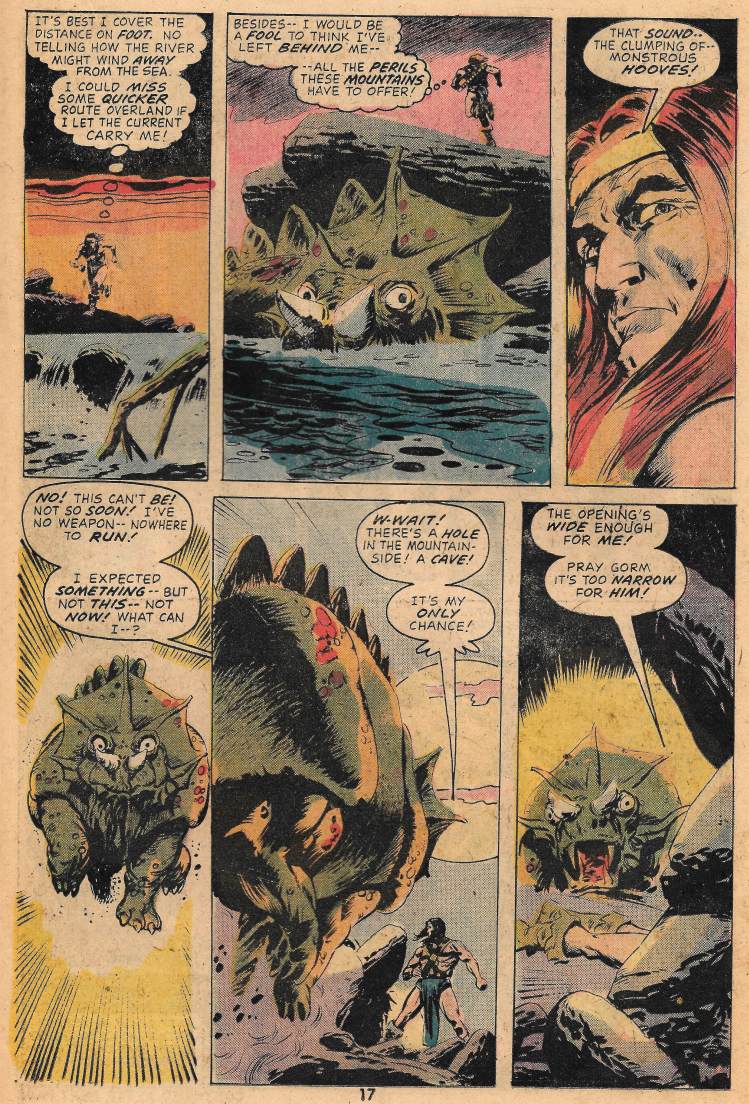 A handy dash in a cave that ends up opening right across from the right Dragon Isle, takes care of all those nasty plot contrivances in one fell swoop. Yeah, this is getting a bit outlandish, all these narrow escapes taking our hero exactly where he needs to go, but again…brain checked at door. Let’s see some Dragon-King slicing! 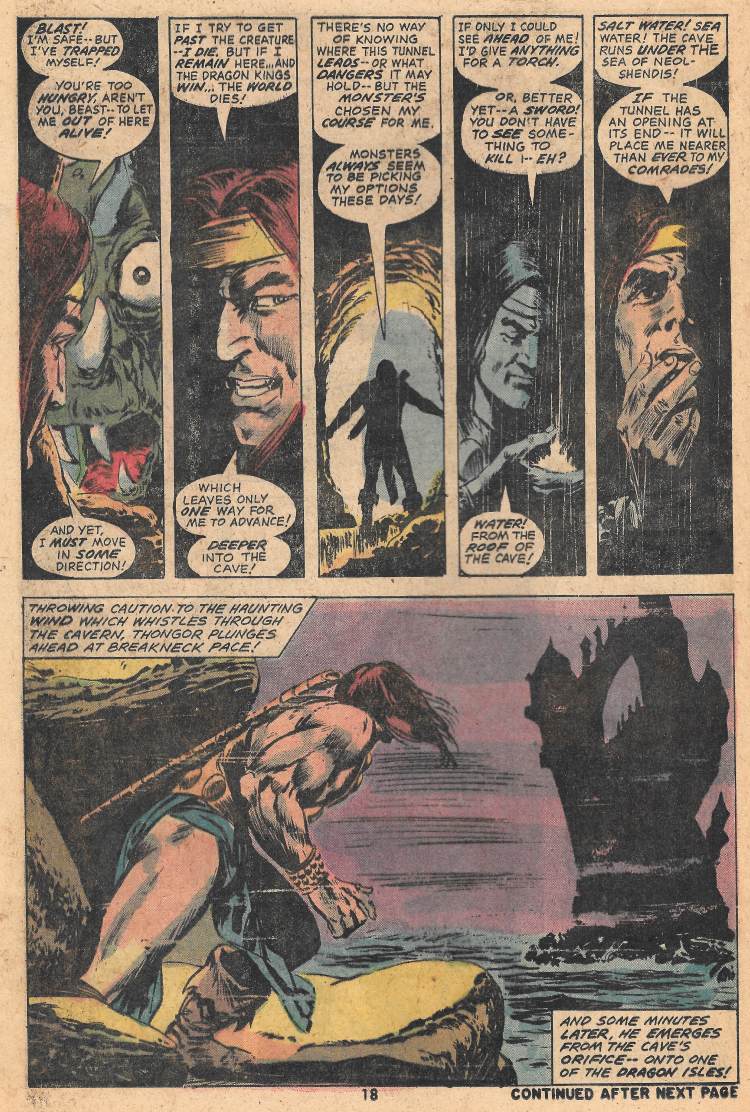 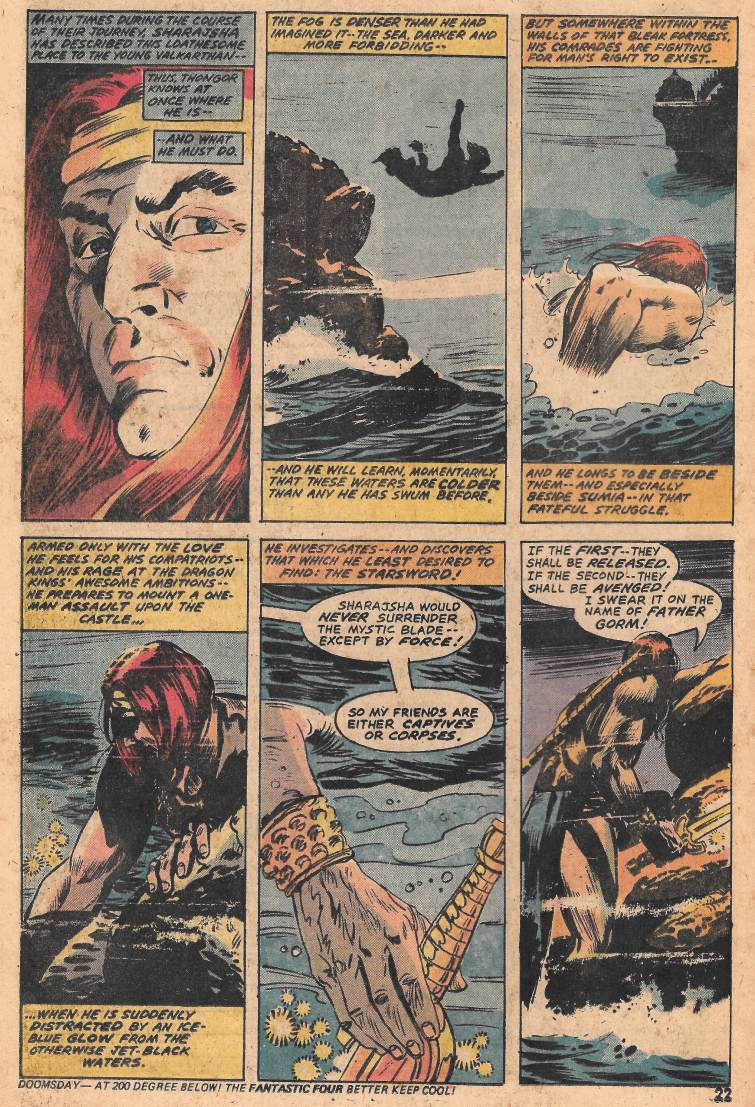 …like how this is EXACTLY the same moment that his friends are being lead to their sacrifice to summon the Lord of Chaos at the hour of the Equinox. Again, how convenient! 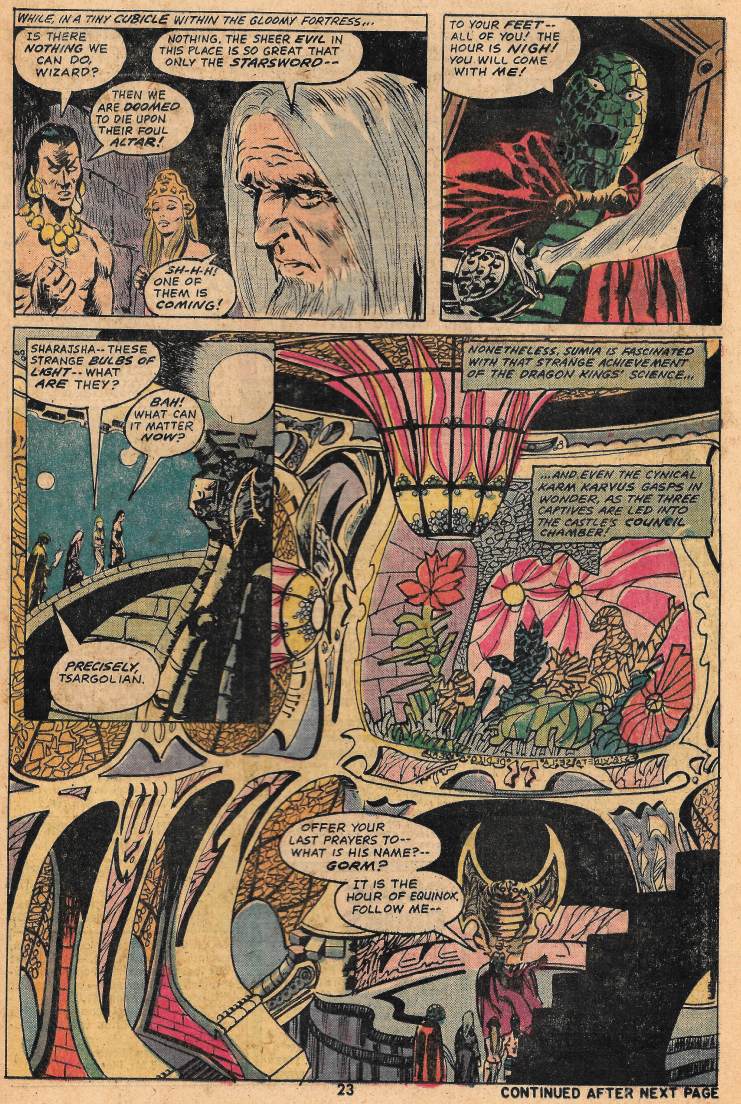 At this point, if Thongor arrives and the Dragon-Kings throw themselves physically on his swordtip, I wouldn’t be shocked.

What does shock me is the following double page spread, which is very nicely done. 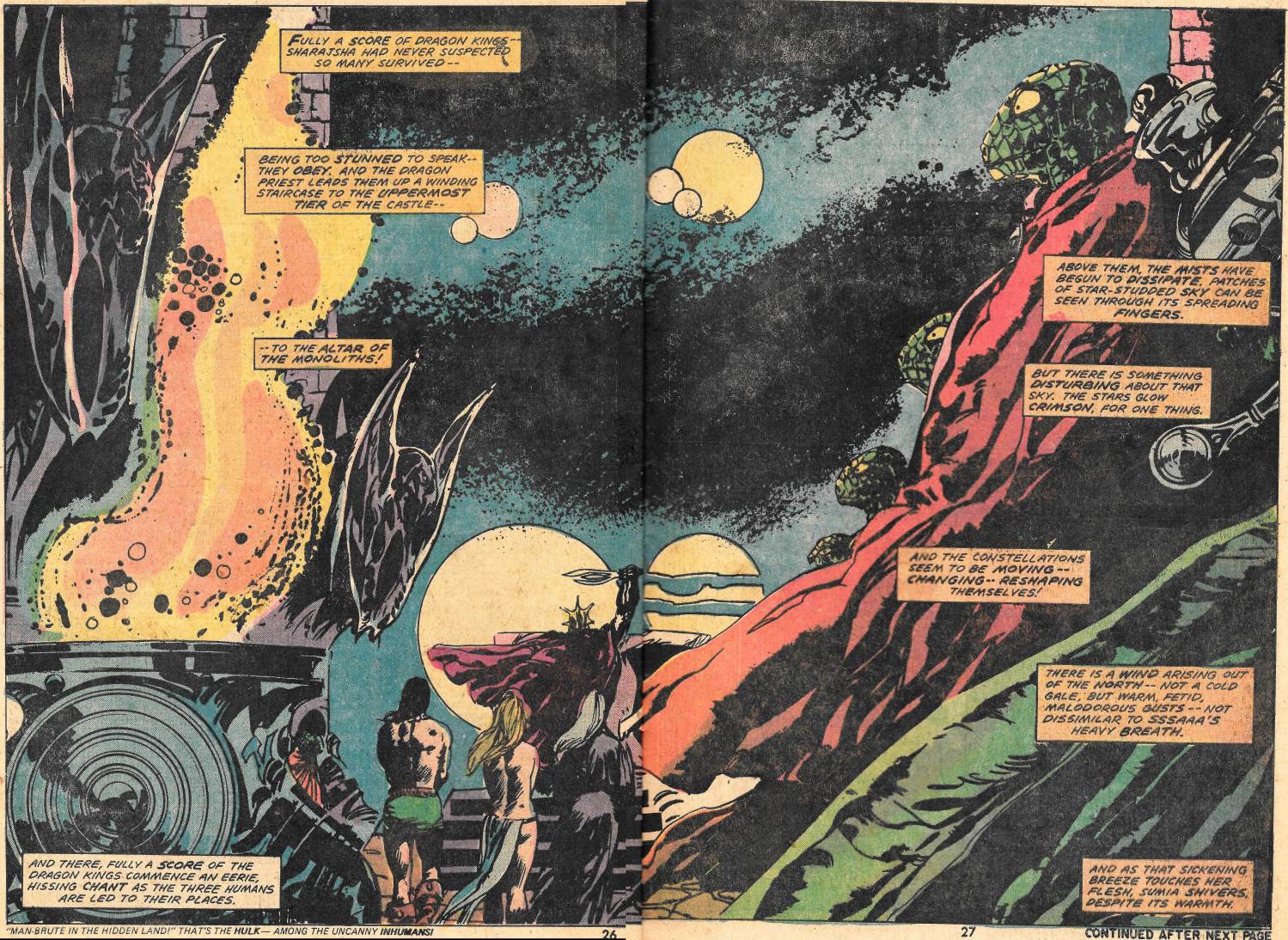 Thongor’s companions get all strapped down, awaiting their doom as the stars change hue and color and finally shape themselves into the faces of the Lords of Chaos. As Sssaaa prepares to strike Sumia’s breast… 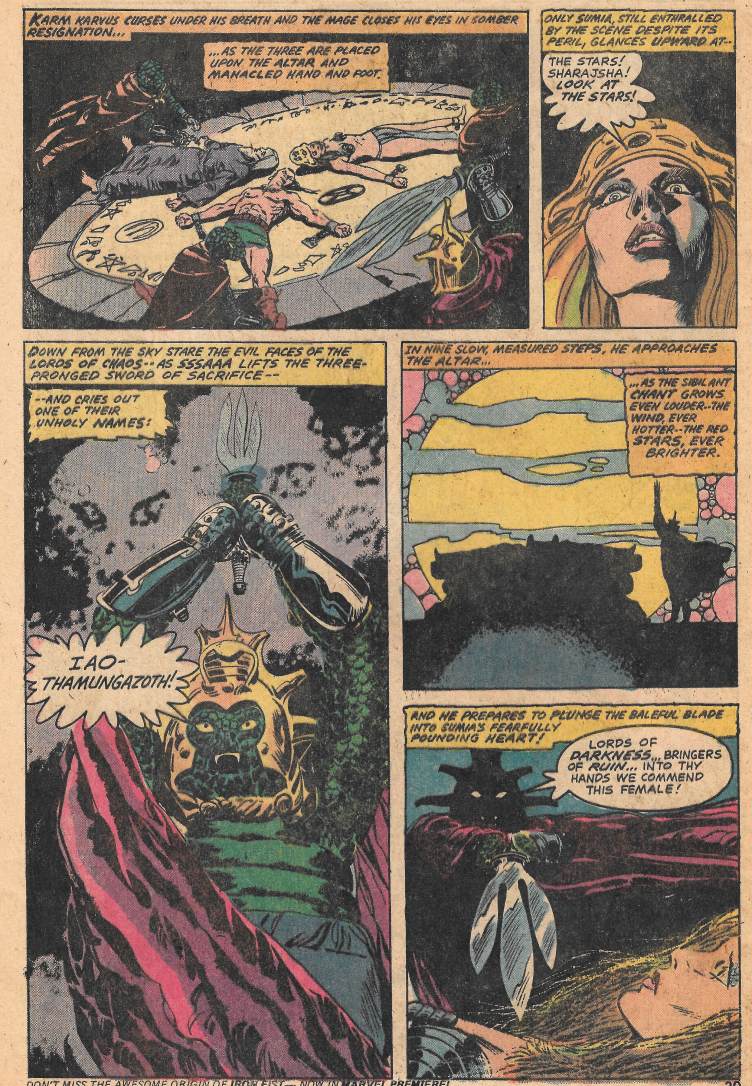 …Thongor appears and suddenly some odd pieces fall into place with this. This feels very much like an episode of… 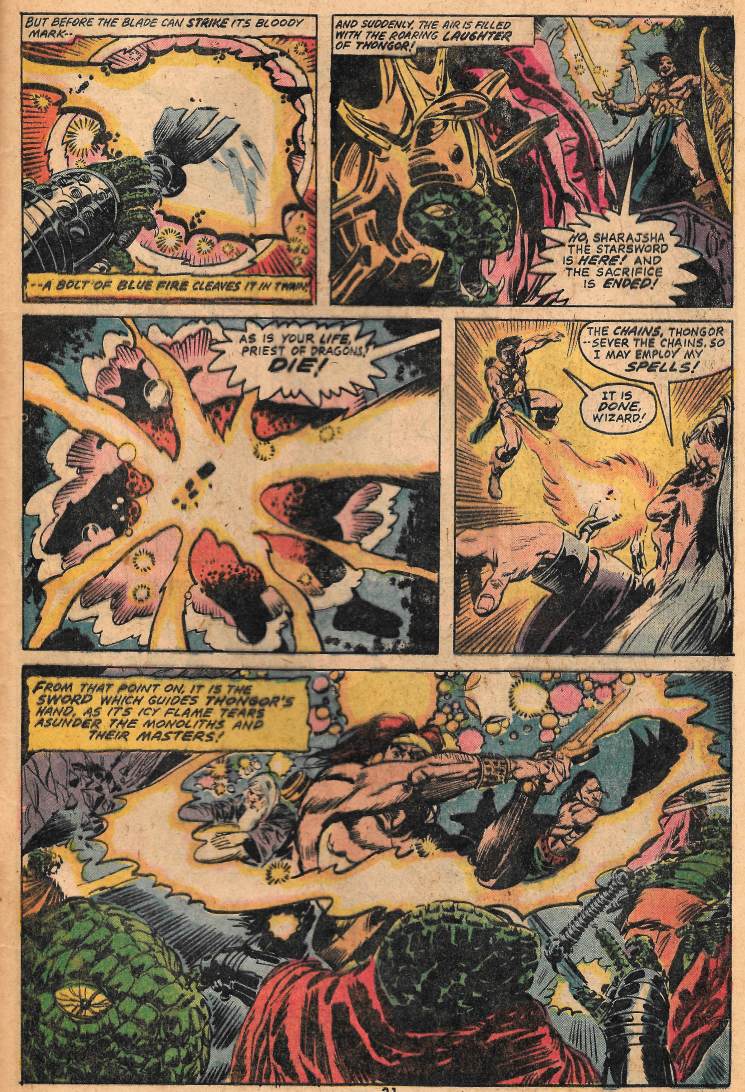 Yeah, Thundarr the Barbarian. Sure that was post modern history and this is pre-history, but you can’t deny some of the elements (Sunsword, odd technology mixed with magic, evil inhuman people attempting to enslave or destroy mankind, companions including a nubile young lady and/or sorcerer…there are some parallels you could easily draw here). That show was fun and had some of this feel to it.

As we wrap up the battle in one panel (boo! Boo! More battles!), the deity these characters worship zaps the remaining Dragon-Kings to death and all is well. That’s kind of a sad wrap-up if you ask me, but what can you do when your series is cancelled? 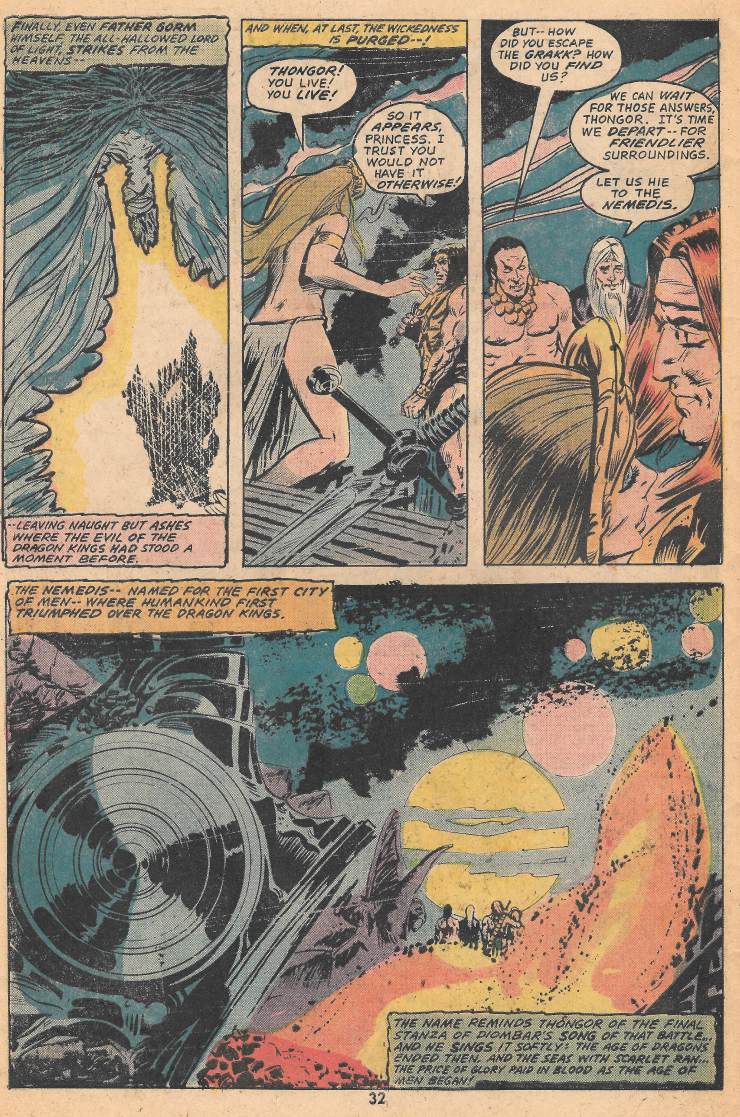 Glad you asked! You can write letters, apparently, as this appeal from the Marvel Bullpen informs us. It’s a neat little aside and a throwback to the days of four-color excitement that guys my age grew up in. Enjoy the bit and the Marvel Value Stamp (cut ‘em out, kids! Ruin your comics! Do it!) on this very page. 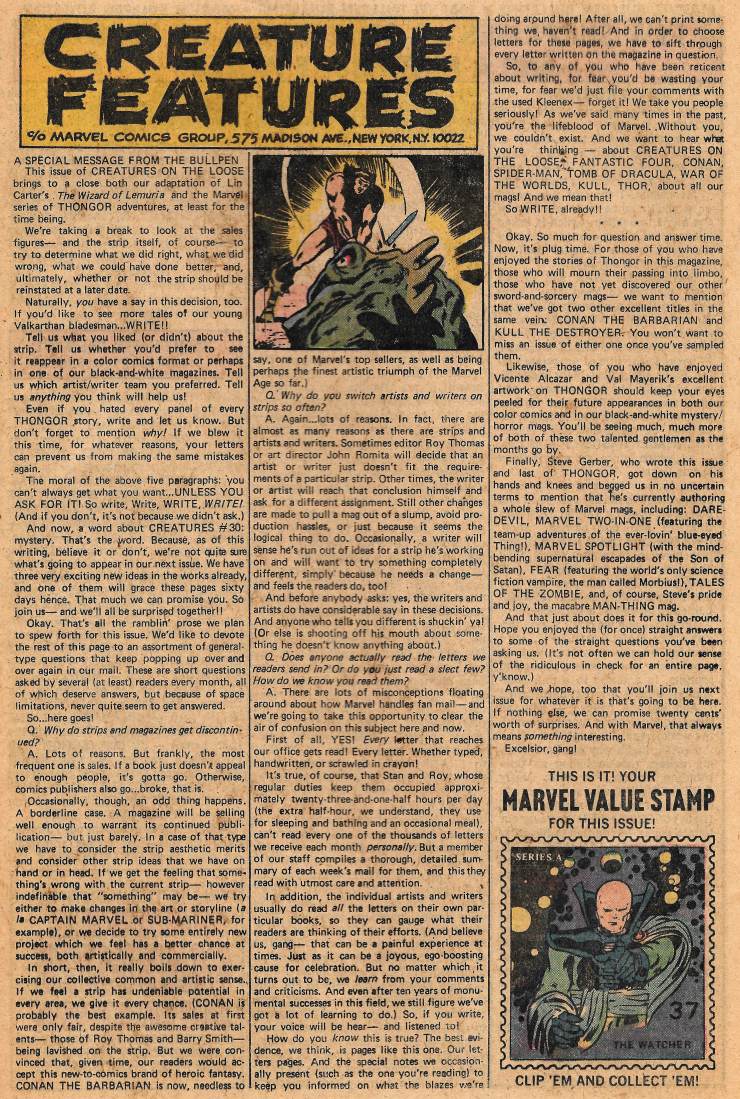 As for Thongor? I’d love to see him return for a limited series, but I think those days are far behind us. He got a movie deal at one point, but the production fell through. Now we are left with the handful of Carter novels (if you can find them) and this brief bit in Creatures on the Loose. Not near enough for those, like me, who thought Carter, de Camp, and Howard were the crème at the top of the pulp fantasy genre.
Posted by SonOfCthulhu at 4:15 PM