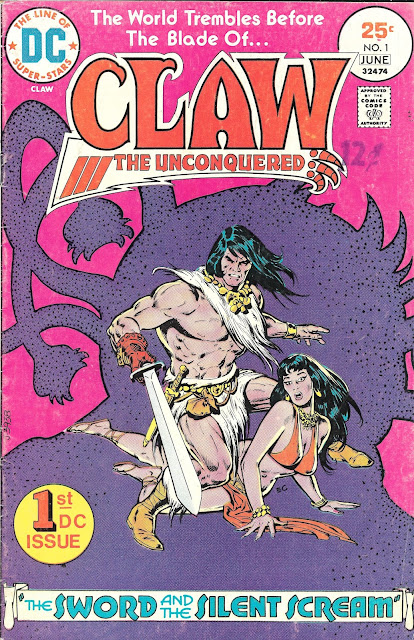 DC goes all Fantasy on us!

The time was 1975 and DC began trying something new to boost sales. Deciding Marvel’s success with its Conan fantasy title was the way to go, DC started the prior year with mixing in various sword and sorcery tales/fantasy tales in with its stable of super heroes. They christened it the “Adventure Line” and out of the seven titles debuting over the course of 1974-1976, all but one could be in some way considered fantasy. That exception would be the adaptation of The Avenger series of paperbacks into the series Justice, Inc. 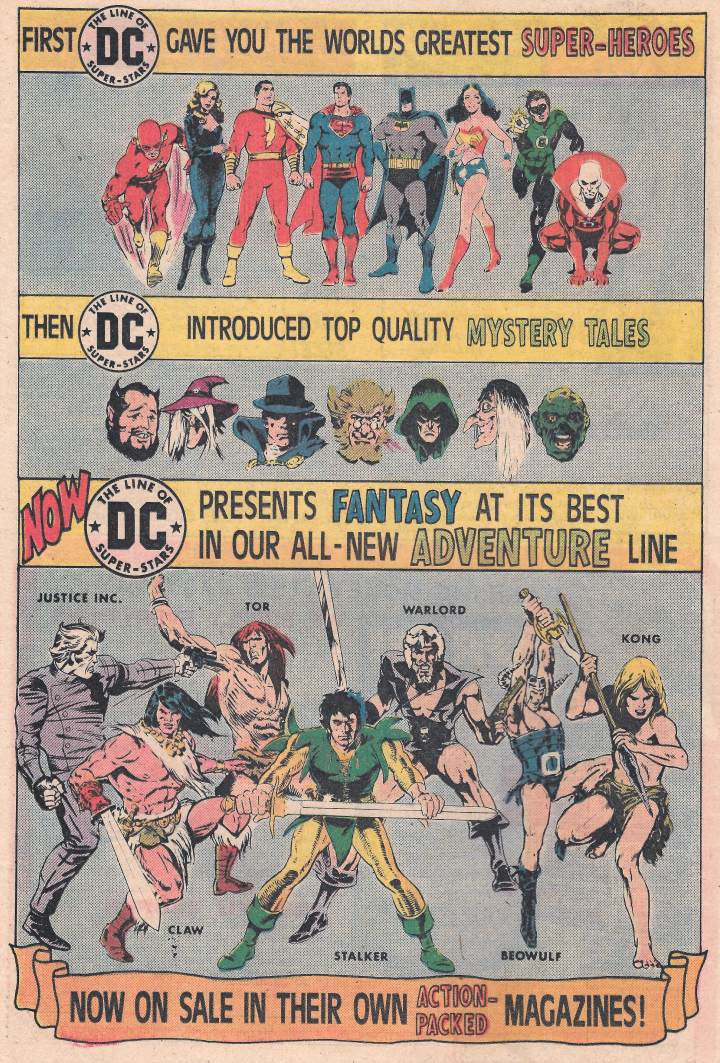 Along the fantasy spectrum the list included a reintroduction of the prehistoric cavemen Tor (from 1954) and a new prehistoric character named Kong, the Untamed. 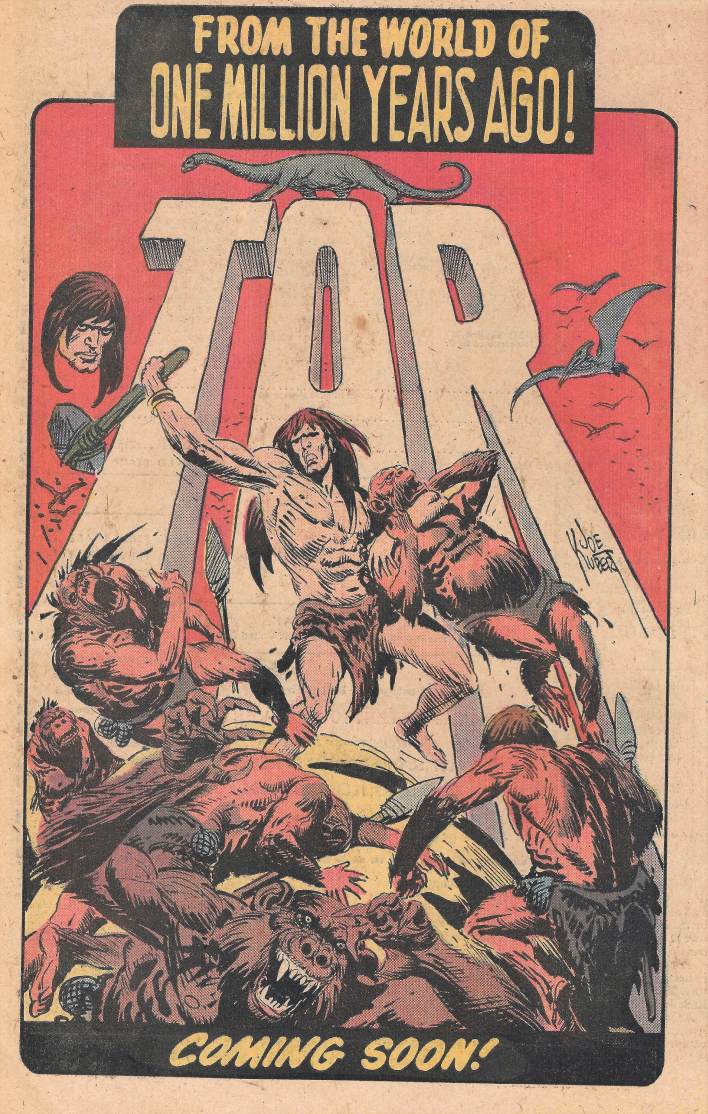 In the Conan mold we had Stalker, the man with the stolen soul created by Paul Levitz and Steve Ditko, Beowulf, Dragon Slayer by Michael Uslan and Ricardo Villamonte, Warlord by Mike Grell and the fella we’re here to discuss today, Claw.

It’s important to note that all of these with the exception of Warlord were cancelled within a year, most lasting all of six issues. Claw got double that chance, being closest in look and attitude to Conan adding to the character’s longevity. The book was a victim of the DC Implosion of 1978, and its cancellation was a surprise to all involved. Two issues had already been written and drawn at the time of cancellation, and these stories were published in Cancelled Comic Cavalcade #1 in 1978.

So much for trying to broaden your spectrum of books DC.

This book was Claw’s first appearance and serves as origin story, character introduction and adventure all rolled up into one. We’ve got David Michelinie as creator and writer plus Ernie Chan doing all the art chores. If that sounds like it might be up your alleyway, then read on as we dive right in…

We find our hero Valcan striding without a care through the streets of the city of Ichar. He’s eyed by the ladies for his bulging loincloth and by thieves for his bulging gold pouch. Valcan is a strictly “look but don’t touch” sort of guy though. 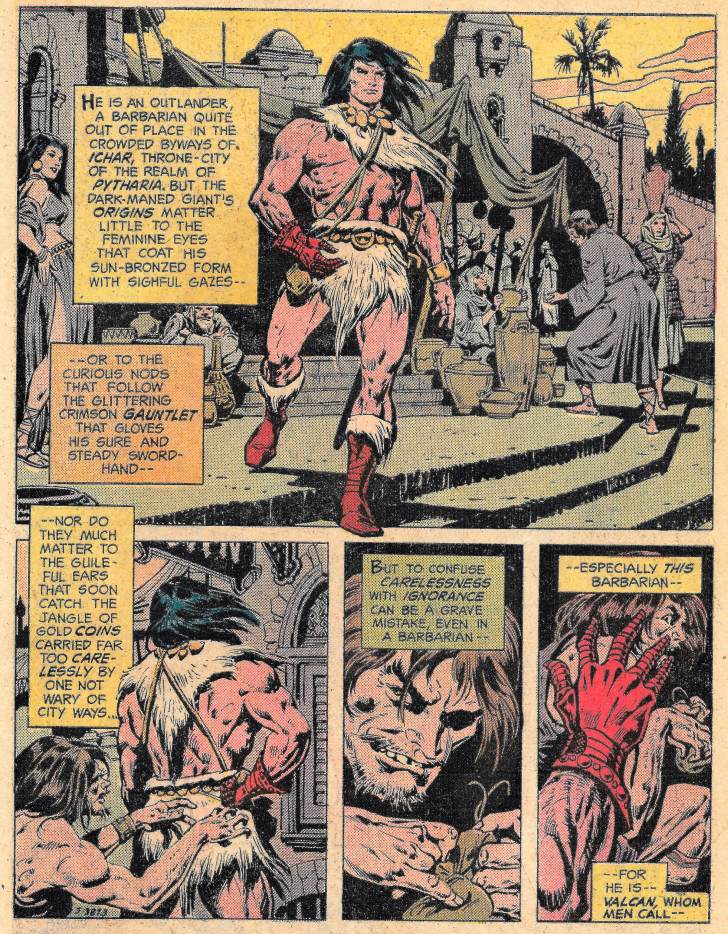 This guy they call… 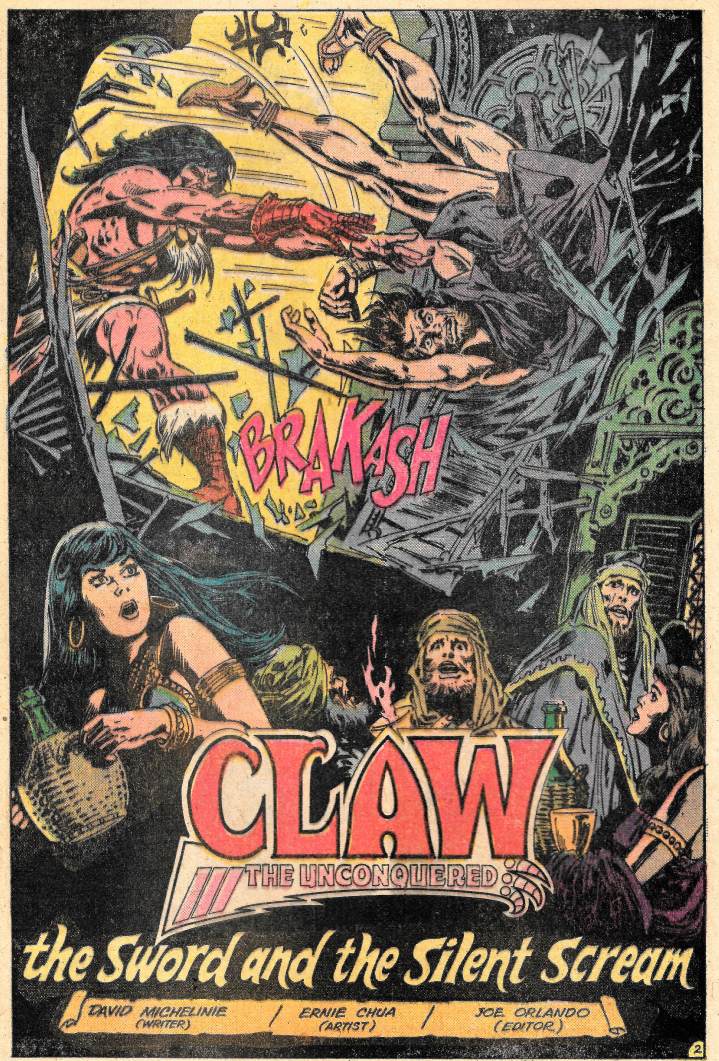 Forget that they misspell Ernie’s last name here and just check out that door-busting scene. If you’re picking up a Conan vibe you aren’t the only one.

Why is he called “Claw,” you may ask? It isn’t because he had that “one glove” idea centuries before Michael Jackson. Let’s give the reader a hand so they can tell where he gets his nickname. 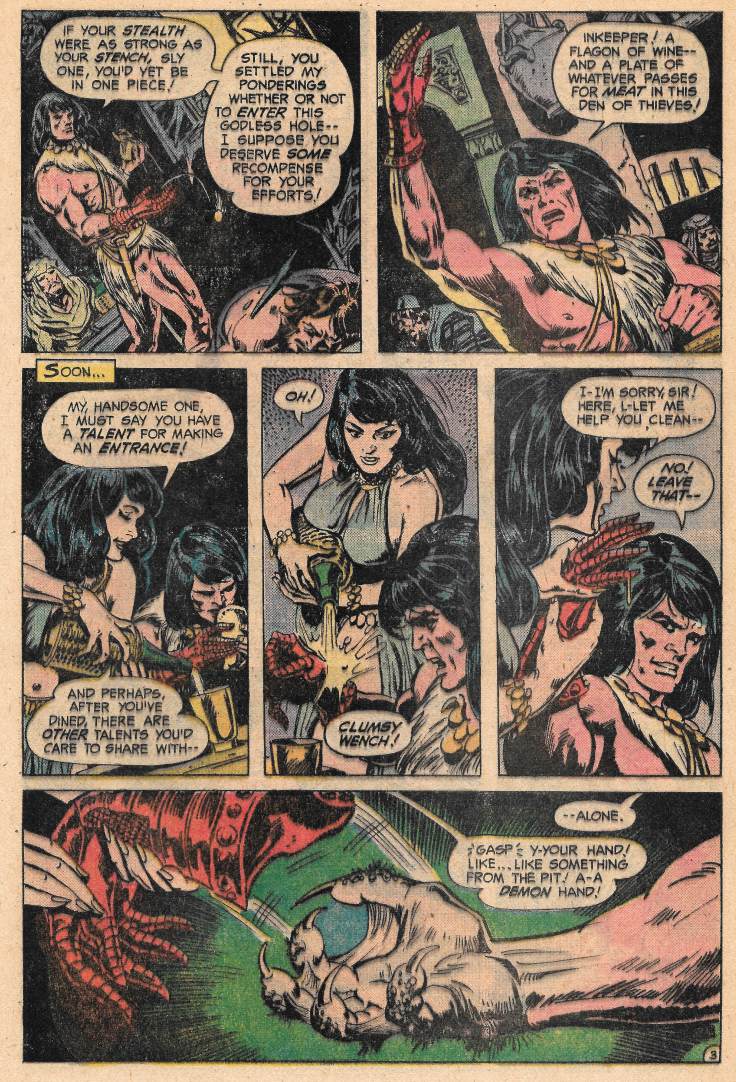 Yep, and as was later tied-in via a backstory in Warlord, there was a demon out there with Valcan’s human hand on his arm. I didn’t get all the parts of that tale so I can't relate why that is.

Note one important thing about Valcan: he isn’t necessarily the hero here. He’s brash and boastful as well as insulting. There was very much a Conan vibe that Michelinie was trying for.

Now we get into adventure mode, the girl tells her pimp (okay, maybe not the exact term, but close enough) and he pays some guys to bust Valcan up on the way back to his digs. 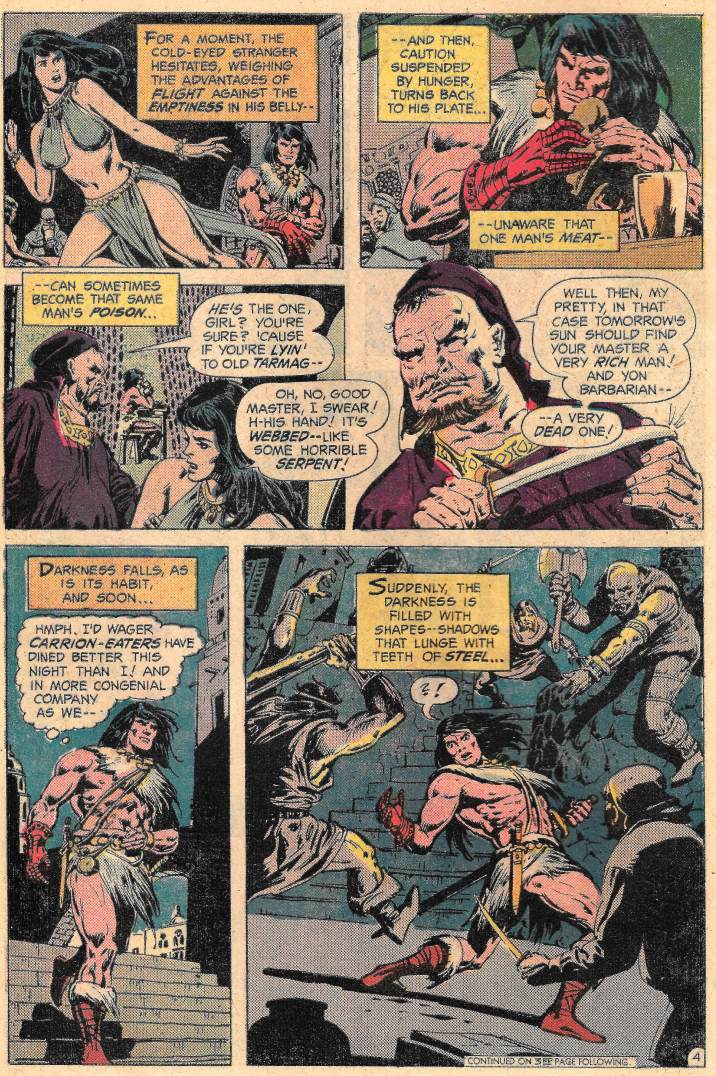 Of course, Valcan slices through them like a hot knife through butter…or maybe more like a demon-hand wielded broadsword through viscera. 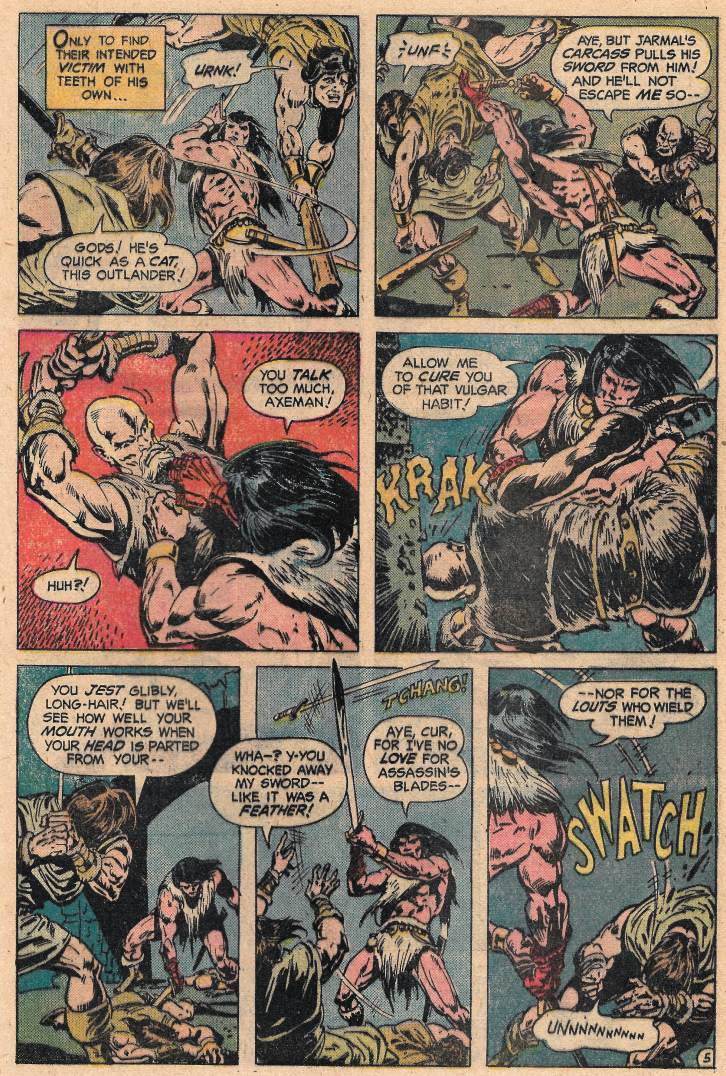 And he gets to the “master” and makes a very non-hero type statement. The villainous innkeeper is saved by the arrival of the city guard and Valcan deciding he didn’t want the entire police force on him for slaying men of the watch. As our main character beats feet, we turn to the innkeeper informing the ruler of the city of the man with the demon hand. Appears this Occulas of the Yellow Eye has been looking for Valcan for some time without success. 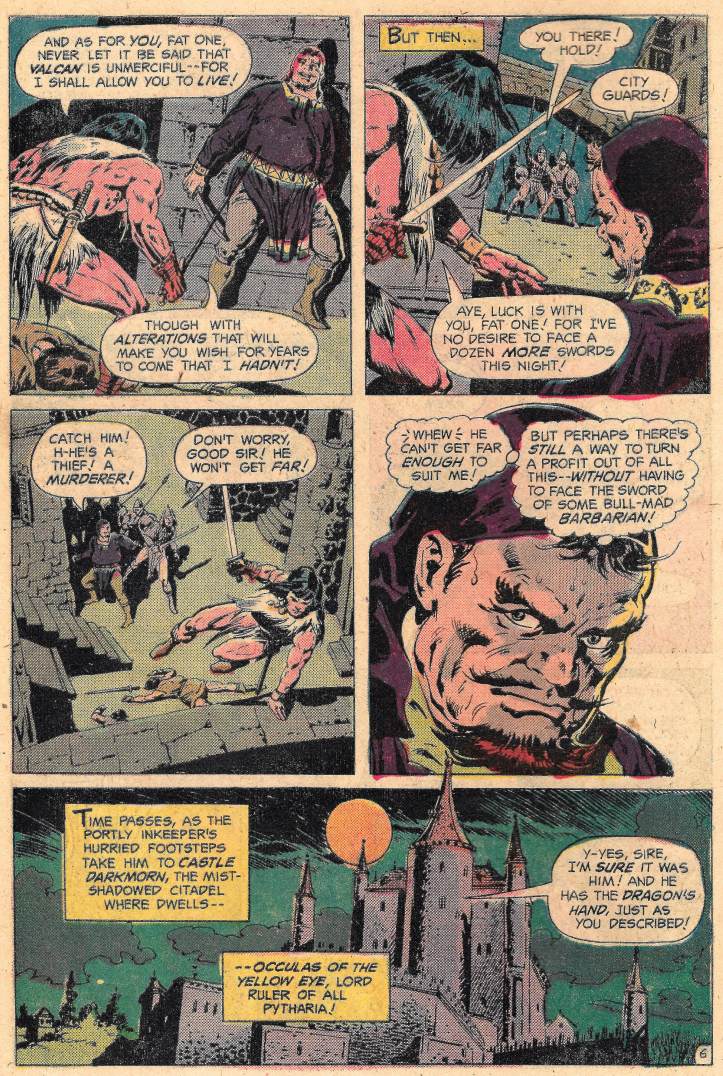 And just to prove his intentions aren’t good, he kills the innkeeper so he won’t snitch to Valcan. Then he chats it up with his wizard Miftung and his swordsman Zedon, both of whom I bet will make mischief for Valcan. 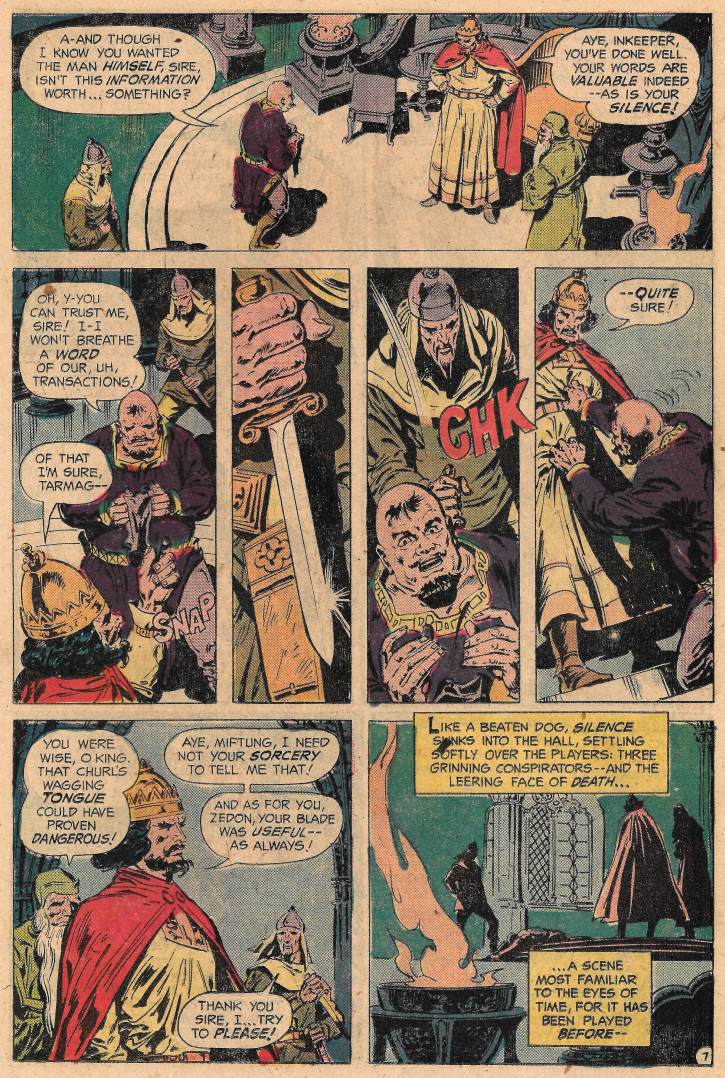 But before we throw anymore guys onto the point of Valcan’s sword, let’s take a look back at Occulas’s past to determine why he wants Valcan so bad. For that we go back to the days when he was not yet ruler of the kingdom and learn that he was an ungrateful little shit who decided to kill his father and make himself king. The court wizard saw he would be victorious, but that justice for the deed would come from a hand webbed like a dragon’s paw. 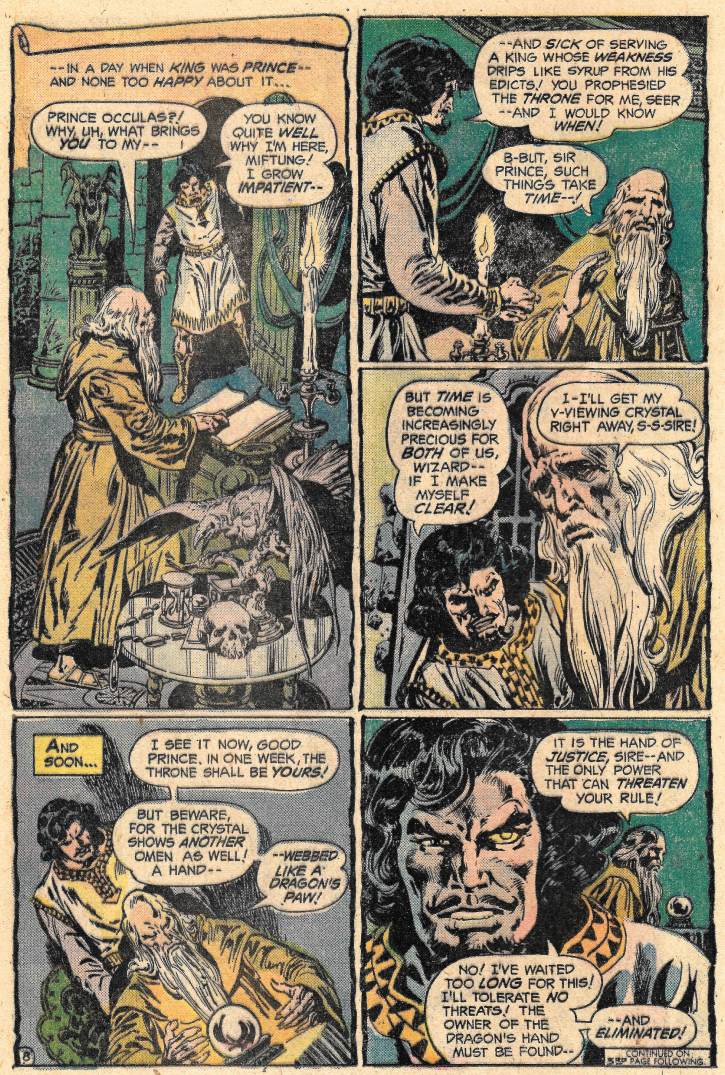 So the prince tortures a buuunch of people until he finds just such a guy with a demon-webbed hand and then sends his guards to kill him. The owner of said hand, a local woodsman, is an amicable sort who would have gone along with the guard dispatched to bring him in for questioning. Would have, except he is killed by the guard under orders  that he not make it to the castle alive. 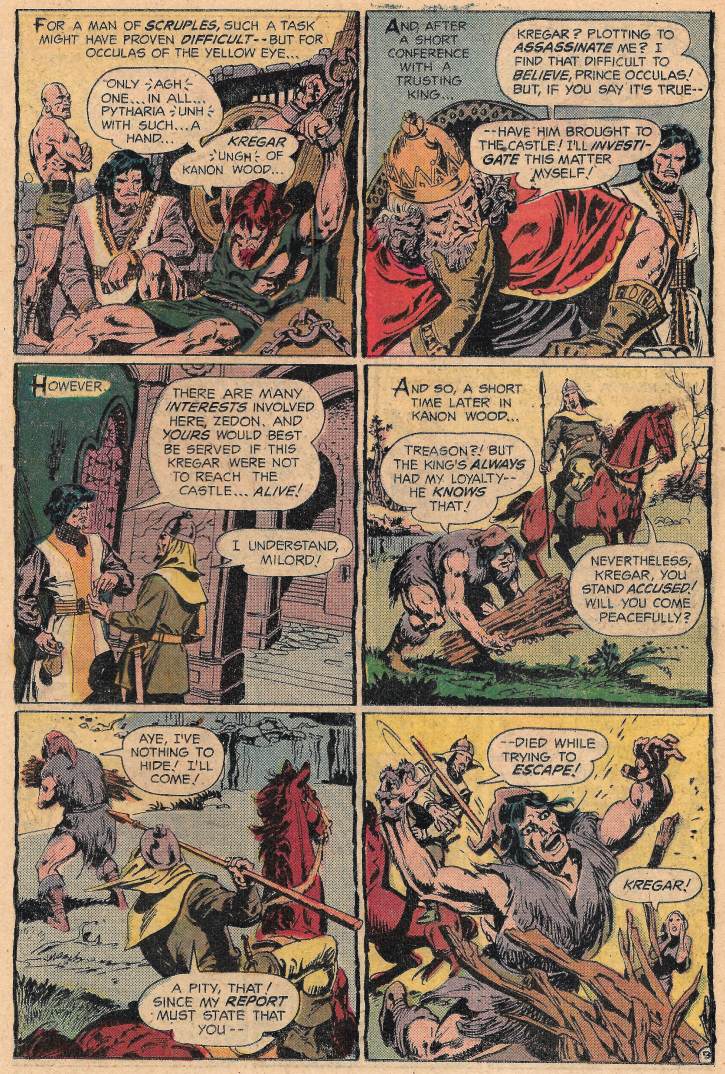 But what the guard did not notice in slaying both Kegar and his wife was that they had a child who also bore the demon-hand deformity. And that child is taken in by some mysterious, magical, and ghostly benefactor. 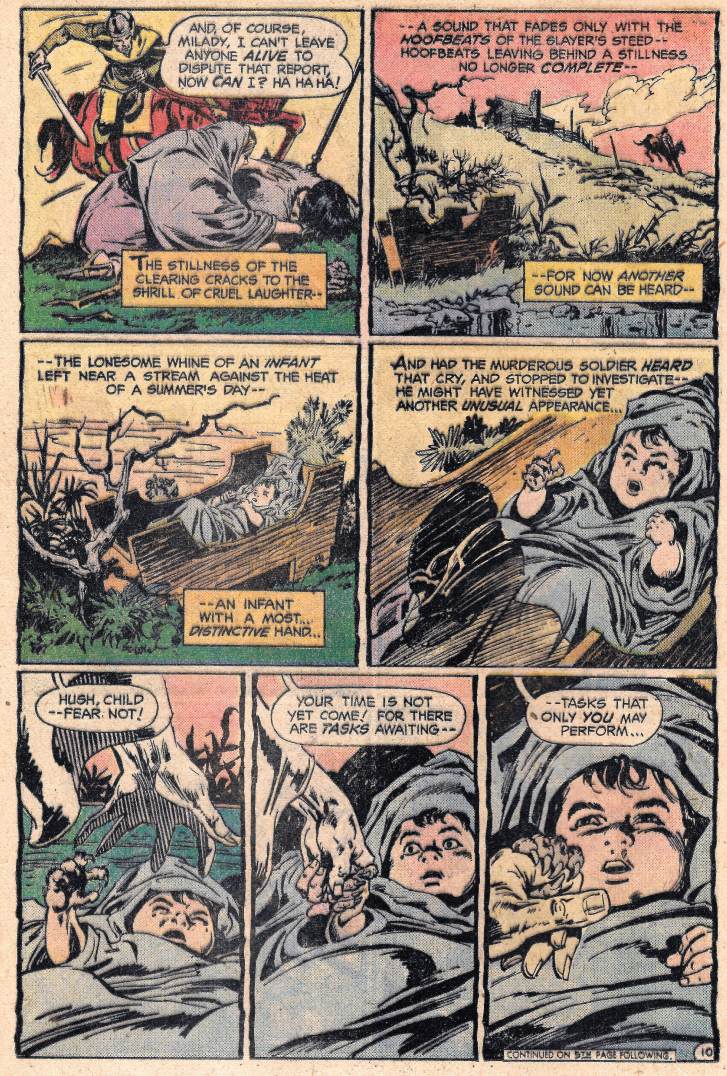 Thus thinking himself safe, Occulas kills his father using poison and takes his place. He’s a horrible ruler, of course, and has troubled dreams every night of the man with the clawed hand coming for his life. 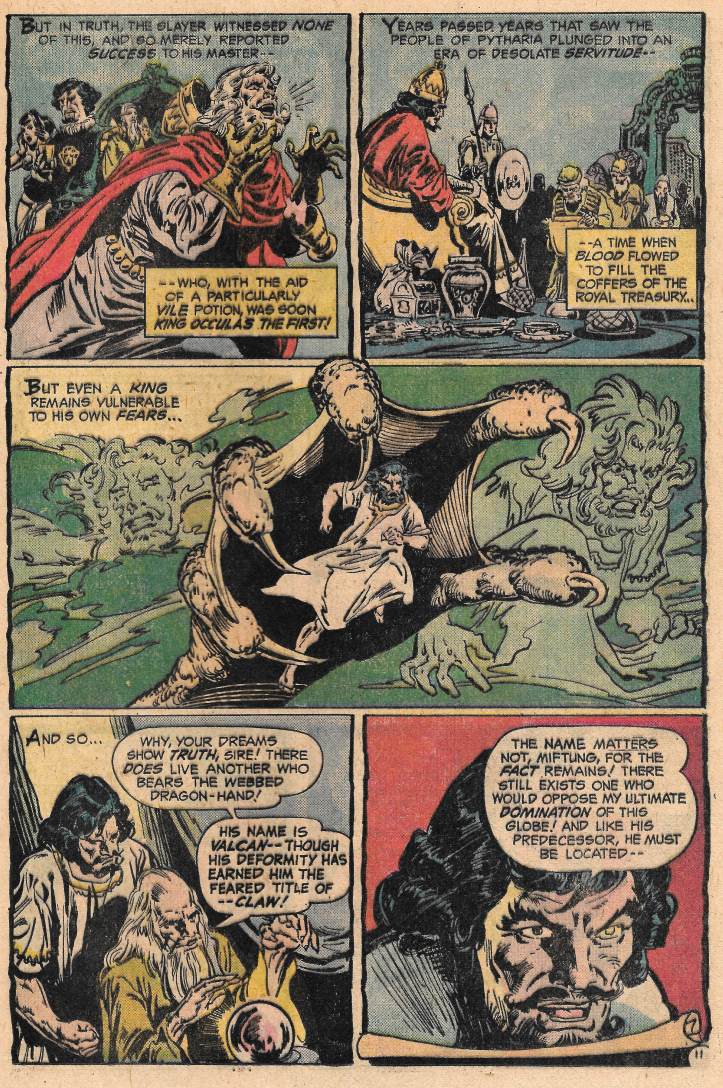 So what’s a ruthless, vile ruler to do? For starters, how about having your court wizard hand off this giant magical crystal to your chief swordsman. Especially since the gem might be super dangerous to the person using it and that Zedon guy has been getting a might uppity. 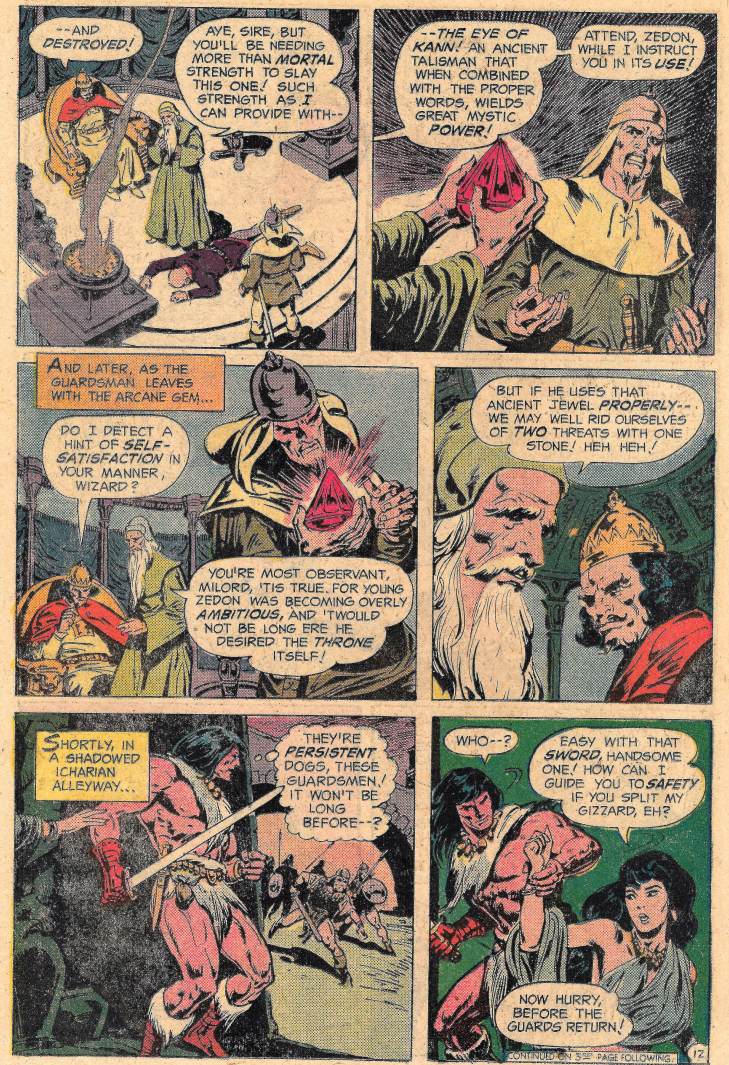 While all that is going on, the pimp-less serving girl now decides to lead Valcan away from the pursuing guardsmen to safety. What kind of safety that will turn out to be, one can only imagine.

As the girl (nameless character, will possibly die by issue’s end) thanks Valcan for indirectly ridding her of her boss, she leads him to an abandoned temple to get him out of the guard’s crosshairs. On the way there, Valcan does his best pickup line which happens to be "I think I’m so great that my efforts at hacking people up with a sword will shape the future for everyone on this planet." With that, the pair arrive at the temple of… 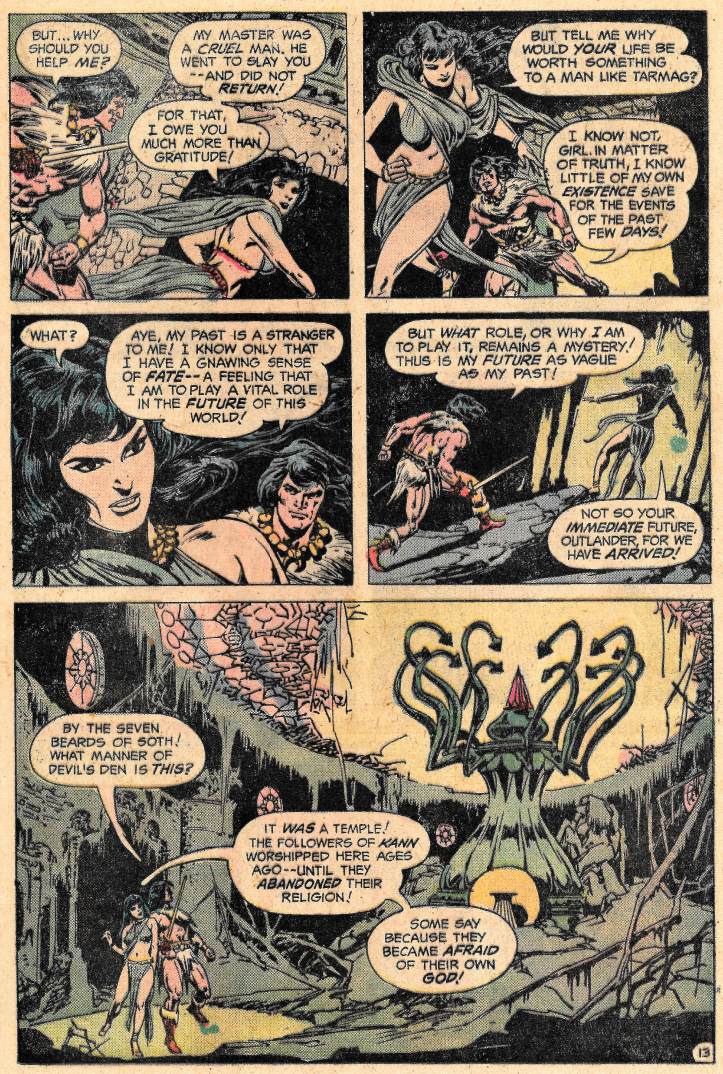 (Come’on. Somebody had to.)

Just about then Zedon arrives, threatens Claw and puts the jewel on the altar. Badda-bing, badda-boom!... 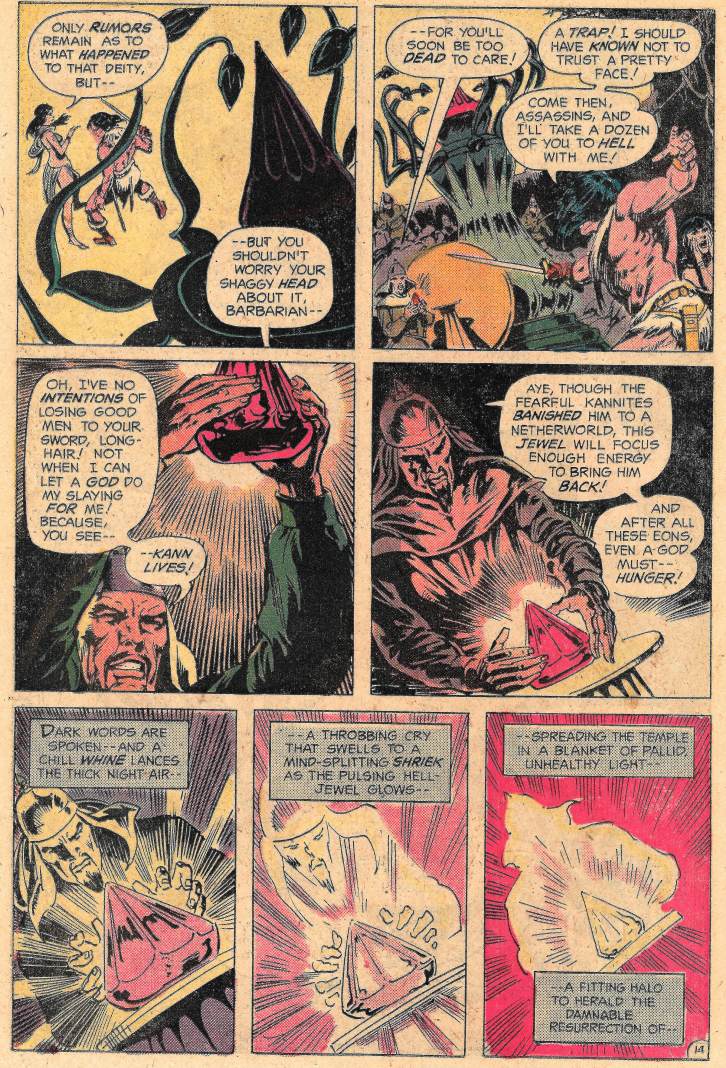 Giant evil Lovecraftian nightmare appears and starts screeching and tentacle raping everyone. Valcan isn’t having any of that action though and saves the girl, to boot. 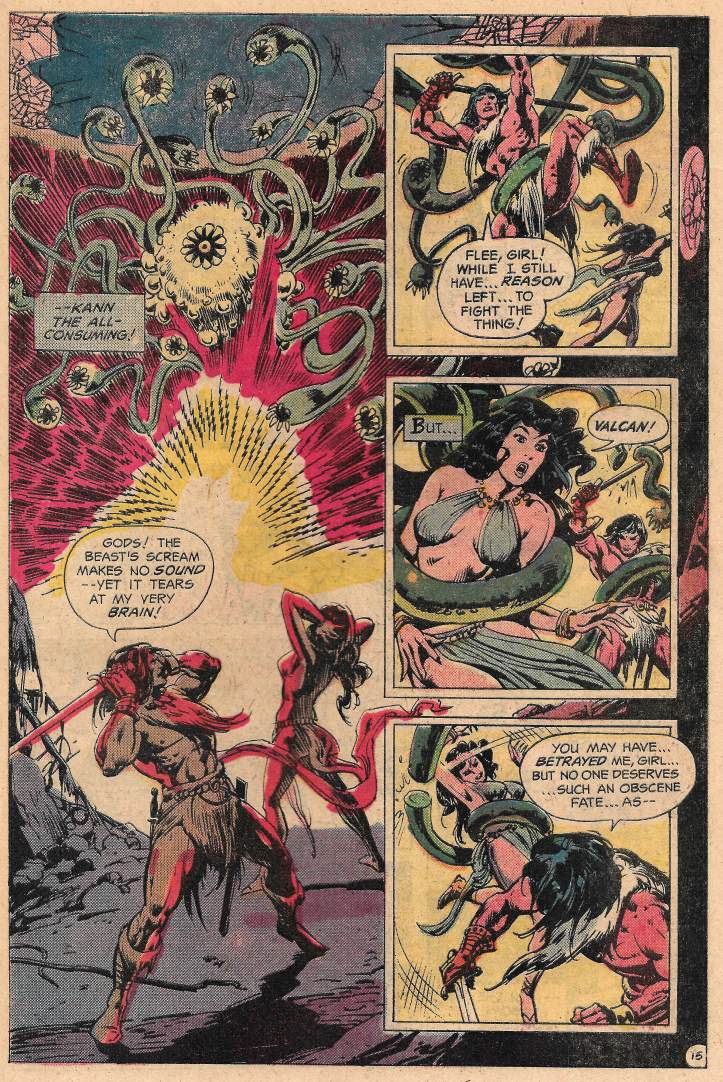 And while Valcan’s sword betrays him, the warrior finds that a sharp stick in the right place can kill an evil elder god. 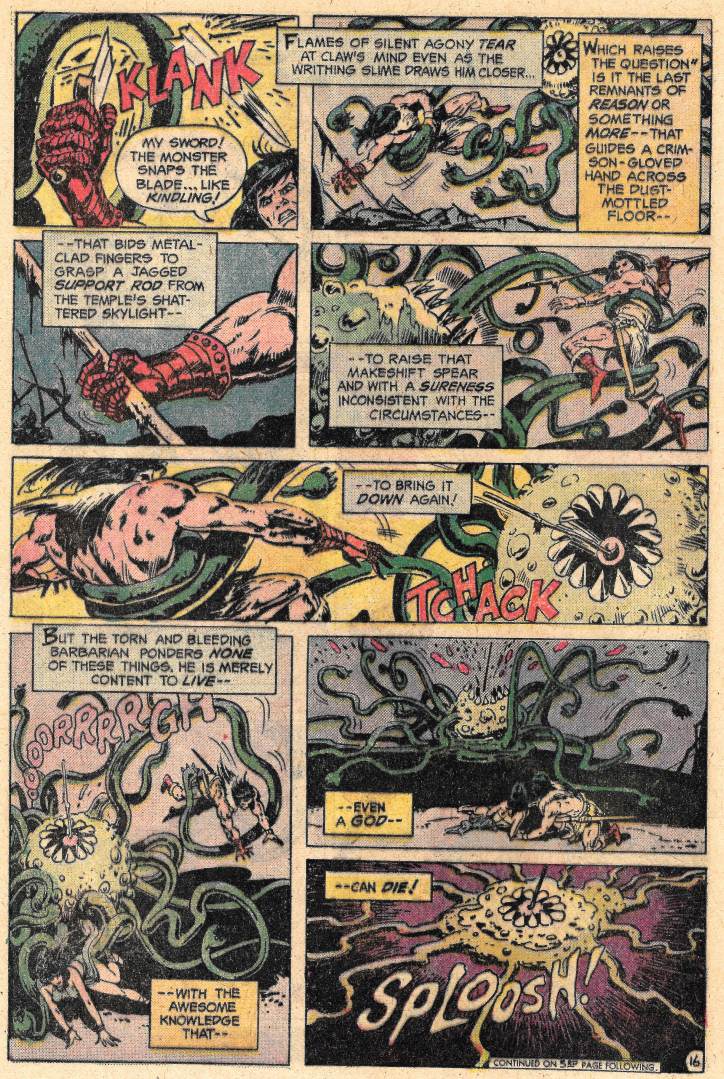 As and added bonus, Zedon has been turned into a rotting corpse and Look! A Free Sword! The brunette makes a play to hang around Valcan (although why? Is kind of a mystery. Any guy that causes giant monsters to attack you the first day you meet him kinda seems like trouble to me.) And while Valcan says he prefers horse (or something, I might have checked out around here), he still takes her along. 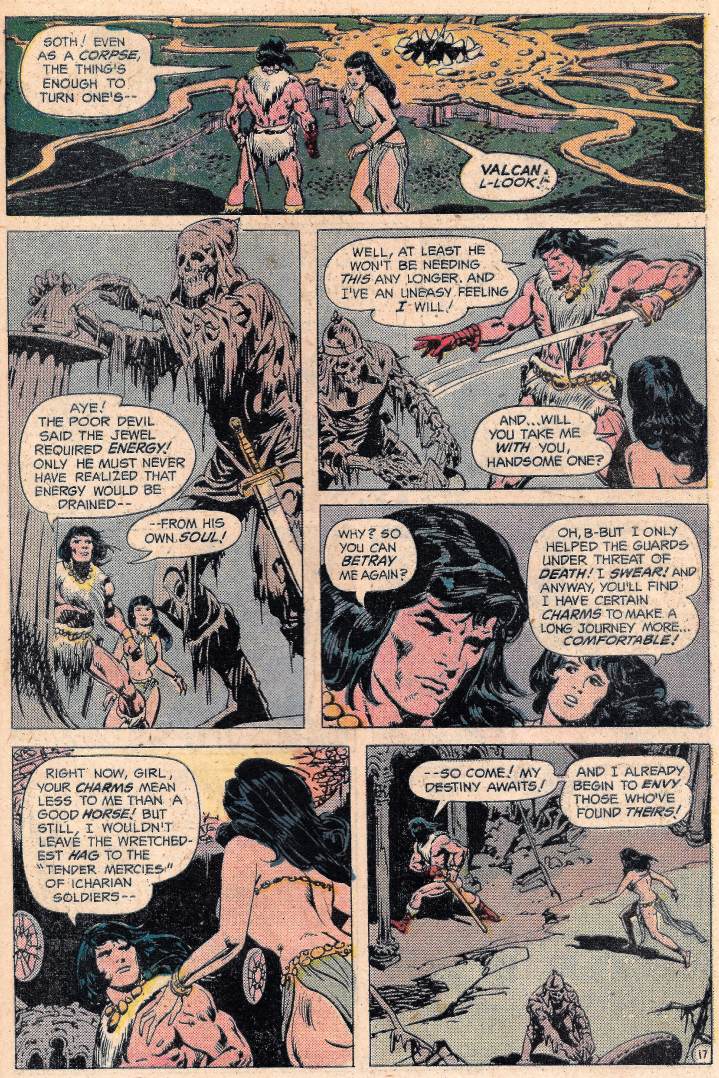 But at the next oasis, she proves to be a turncoat again. So Valcan leaves her for the jackals and continues on his merry way alone, off to find his destiny. 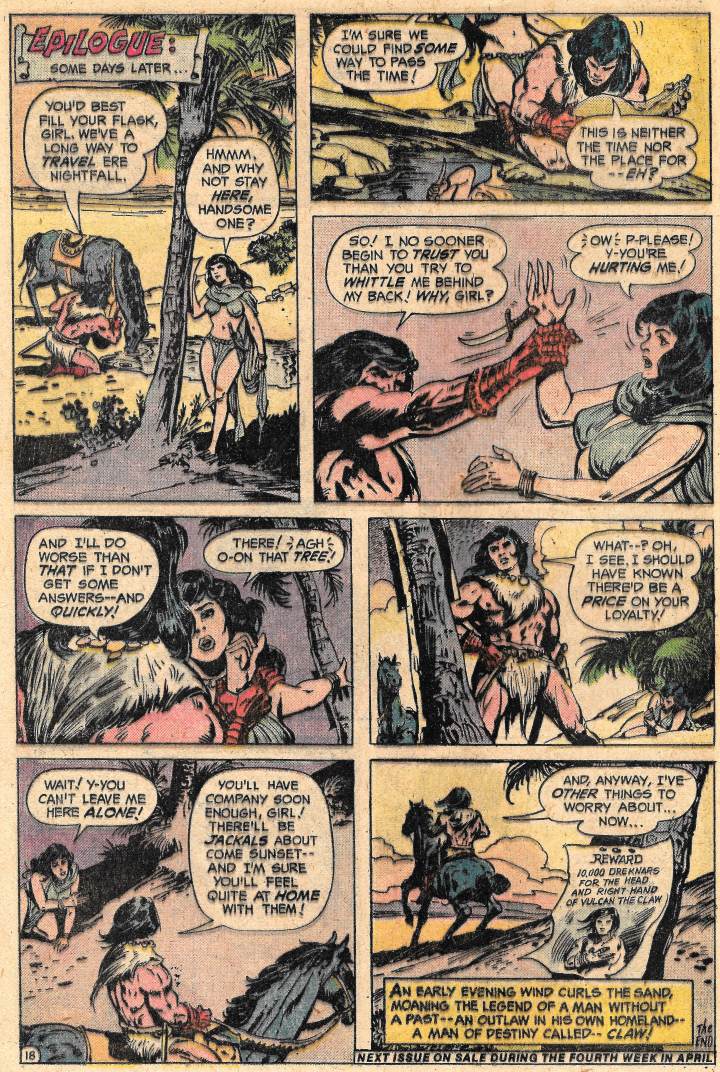 Alright, so this was pretty good. I knew Michelinie from his Spider-Man days and this proves he had the chops for a good tale even earlier in his writing career. A few of these have popped up in the Crapbox, so maybe you haven’t seen the last of Claw in my reviews. I certainly hope to have time to visit him again soon.
Posted by SonOfCthulhu at 3:07 AM