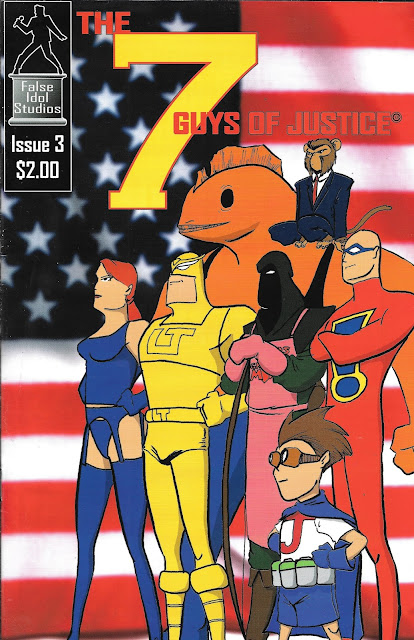 I cannot think of a better way to kick off our pre-Thanksgiving salute to Forgotten Heroes than this book.

We are doing Forgotten Heroes now because they fall it two very distinctive categories. The first are heroes that were completely sub-par. Real loser types, who from either the writing or the art were not really worth our time to remember. There are many of these in the Crapbox. Mostly they are failed concepts from garage-made companies who folded up by the time their fourth issue rolled off the presses.

The second category are admitted a better find: great hero stories in either art or writing that were just missed by mainstream audiences. These characters and books don’t belong in the dustbin of history and I feel so good when I’m able to bring you one when I discover it.

Certainly that makes this month a “Lady or the Tiger” kind of thing, but you know SoC. That’s just the way he likes it. And as luck would have it, today’s pick is way more lady than tiger.

The 7 Guys of Justice was the only book published by False Idol Studios. It achieved modest success apparently, as the book ran for 13 issues, which is far longer than most independent publishers could afford to support a failing title. Obviously, they were doing something right with the book.

The title was helmed by writer Brian Joines and artist Joshua Rowe, who share the creative credit for 7 Guys. Brian went on to write for other independent comics, his work showing up in the titles Noble Causes, Secret Identities, Imagine Agents, Krampus and the extension of the movies’ book series Bill & Ted tie-ins. As you’ll soon see, Joines has great writing chops when it comes to comedy/parody.

As for Rowe, he disappeared from comics after 7 Guys. I am a little saddened by this. Not because I find his art great, but more because I find it rudimentary and crude. If there is a weak point in the book, it is Rowe’s art. BUT, it is serviceable. Enough to last an astonishing (for b&w independent books) thirteen issue run. The panels convey the story and several work with the tone and theme Joines is writing. However, we are looking at crude line art and sometimes it gets a bit jumbled. Other times, the frames look empty and unfinished with no backgrounds or establishing shots.

I’m sad because Rowe might have developed into a sought-after artist had he kept after it in the comics realm. With the right mentor and training, he could have taken his natural storytelling abilities and enhanced what strengths I do see in his work. There’s good stuff in the book, but it is generally over shadowed by just “okay” stuff. Still, I’d rather have him than many of the artists I’ve complained about here in the Crapbox. I can see the story Rowe is spinning clearly, without too much distraction. That’s a big deal.

Wherever he’s at and whatever he’s doing, I wish him well.

But enough background, you came here to see some heroes and that’s exactly what the Crapbox is delivering today. The 7 Guys of Justice, as the title implies, is a bit of a superhero parody. The book is done up in the style of the Giffen-DeMatteis Justice League or, for that one person in the audience who doesn’t know what that is, as a band of people with as many quirks as they have superpowers. The threats they face usually have a comical element to them as well.

I’m happy to report that Joines pulls all this off in style. He “gets” humor, so much so that I found each page delightful which is the hallmark of a good comedic story. I would seriously encounter enough cleverness with each page turn to warrant a legitimate snicker or at the very least a decent grin with eye-roll.

The only hard part to overcome is the fact that we are three issues in and while we have a prior issue blurb, it doesn’t do enough to establish which character is which. Also the story flow is complicated by the fact that there are TWO battles going on at the same moment at two separate locations. And don’t look at Rowe to give you backgrounds with his character graphics that allow you differentiate between the two places, because that isn’t his style. It’s lucky for you that I’m here to narrate for a bit.

The team of heroes is at Nathan Explode Manor combating guys in jet packs. Nathan Explode is an ex-hero, about to reluctantly hand over reins of his hero identity to Johnny his school-age son. And yes, his power has something to do with throwing mini bombs at people.

Nathan has also gathered a bunch of heroes at his place to confront the evil Dr. Jerque (I didn’t make that name up) and now they are under attack by these jet pack minions. The heroes are sort-of lead by Lord Talon, the guy all in white (or yellow) that looks like a low-rent Hawkman. It will quickly become apparent that he’s missing a few cards in his deck.

Our seventh “Guy of Justice” is an actor who is supposed to be in a Mostess (think “Hostess”) cupcake commercial as the company’s hero mascot: The Surprise. The commercial is taking place at Big City Studios, in the heart of downtown. However, the shoot has been interrupted with the arrival of Dr Jerque, his hench-person Steven, and his army of talking BEAVERS. 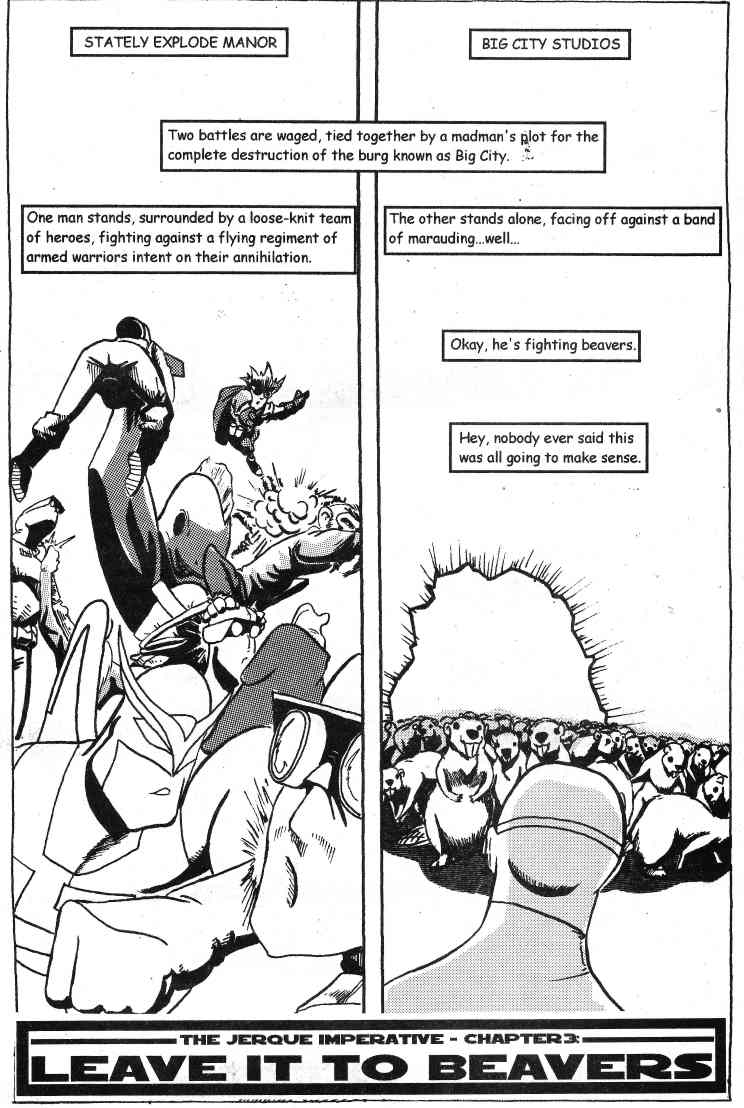 Joines prose style pulls this off. I get a chuckle on page one, so he’s racking up points right away. As is “Johnny Explode,” who starts taking down bad guys left and right. 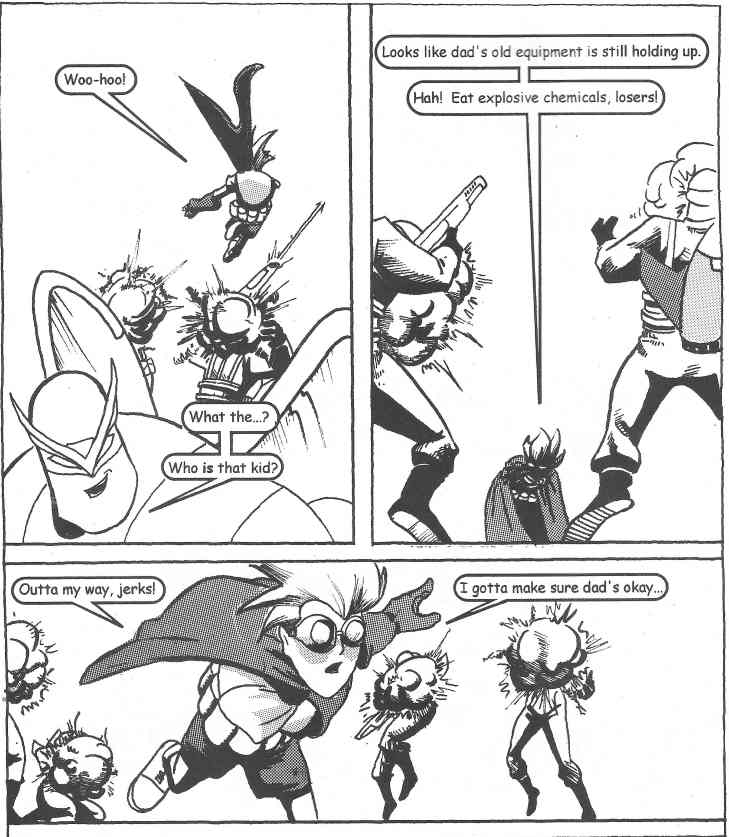 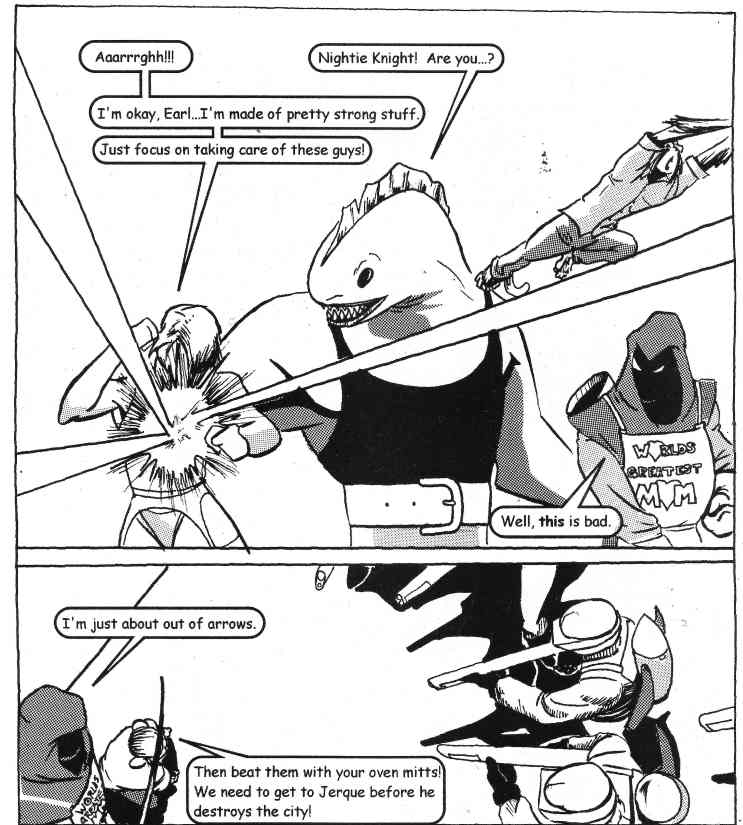 That’s Nightie Knight taking the blast as Moray Earl asks if she’s okay. Then Ugly Monkey has some words of support for Hunter-Gatherer. Just wanted to be sure everyone got a clear photo op here at the beginning.

While I was doing that, Nathan Explode was surrounded and about to be gunned down. Johnny whips in at the last moment an saves his Father’s neck, however… 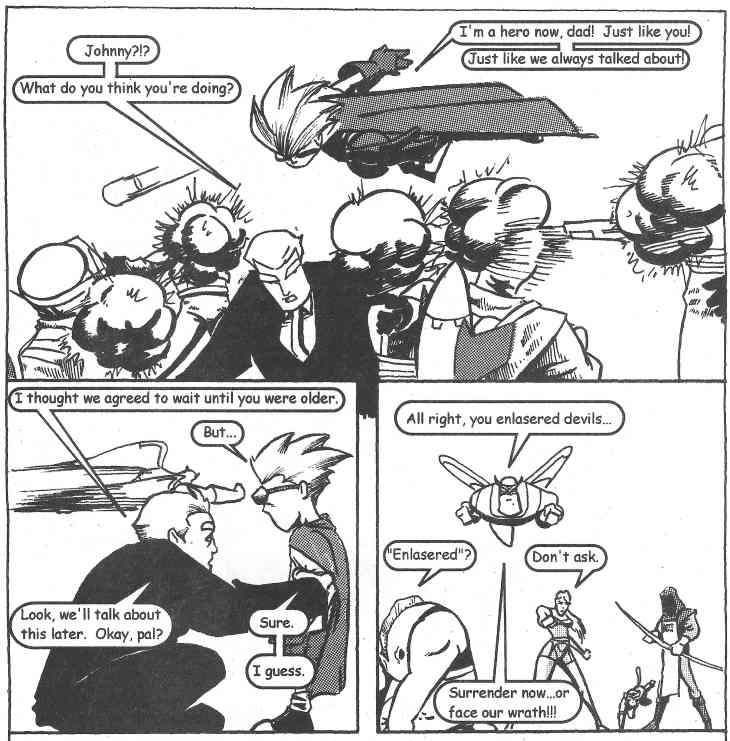 Note that Lord Talon, the supposed leader of this troop, is kind of an idiot. Or at least he’s “special” in an almost Blue Falcon kind of way. In fact that model makes a bunch of sense given his look too. The heroes present too strong a front for our villainous henchmen, and the last three of them fly off.

And with that, let’s turn to battle number two where we find the actor playing the Surprise hiding behind a barrier while Dr. Jerque plots with his talking beavers to cutaway the foundation supports holding the town aloft over a large chasm. Jack, the actor playing his sidekick, tries to talk him out of leaping into a battle with Jerque that will likely get him killed. 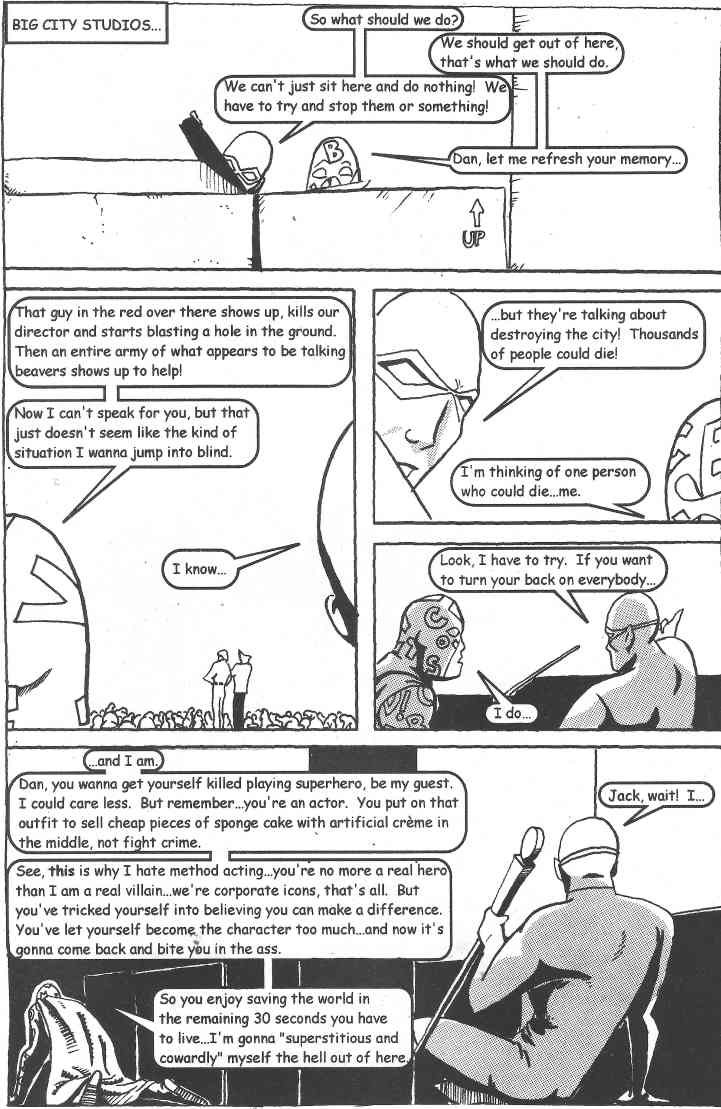 I love this entire exchange. It resonates with my sense of comedic timing to an absolute “T”. I like the pauses and the interruptions. I like the flow and the fact that while it is exposition explaining last issue, it also works as two characters talking to one another in character voice. Just a great job by Joines in my opinion.

And if you think I like his talking human characters…

…you know I’m going to go ga-ga over his chatty little beavers. 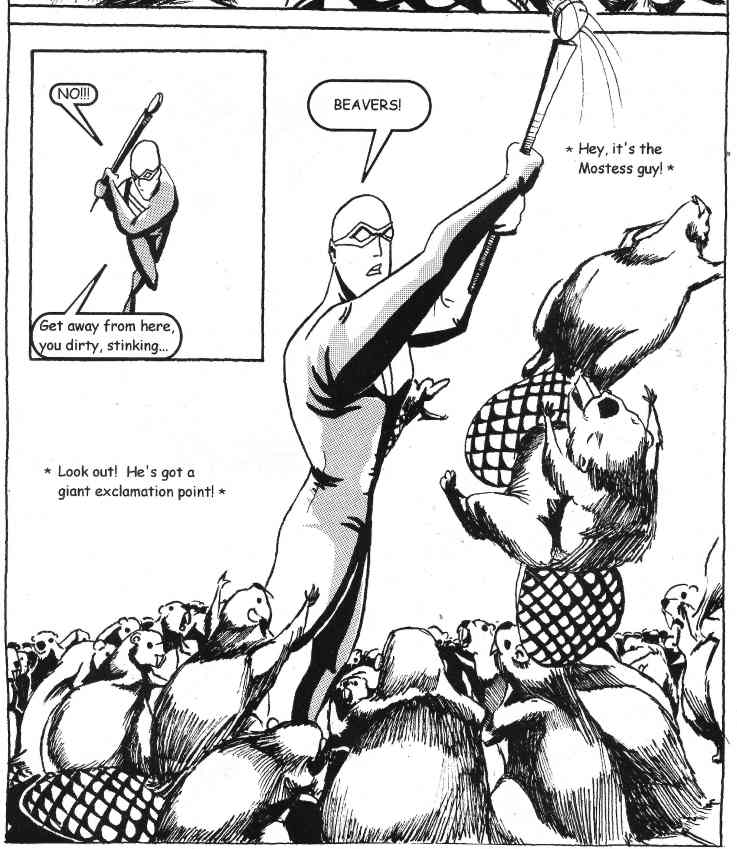 It’s the little things that matter. Like that beavers know where New Brunswick is…or that they understand punctuation symbols or the names of cupcake company mascots.

What can I say? I just love beavers. 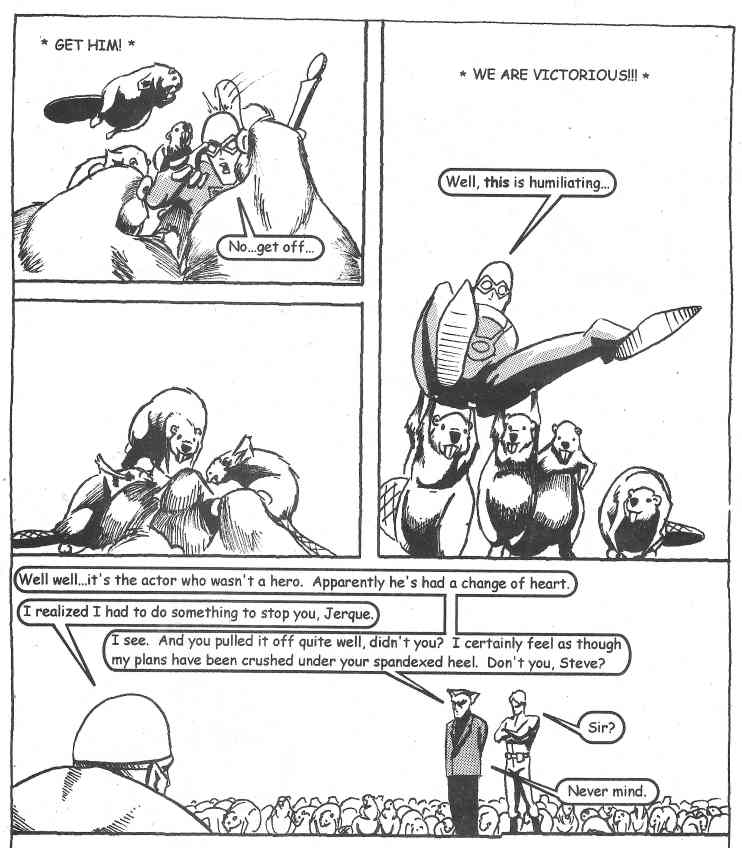 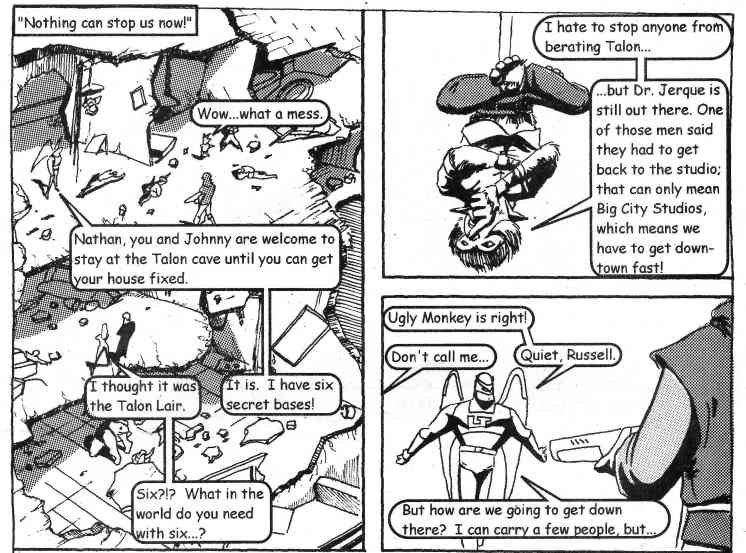 Which means jetpacks for everyone and a hasty trip down to Big City Studios for a climatic battle against the evil beavers of Dr. Jerque. (insert maniacal laughter here).

And those beavers look pretty unopposed as Dr. Jerque’s men appear to be holding off the police. 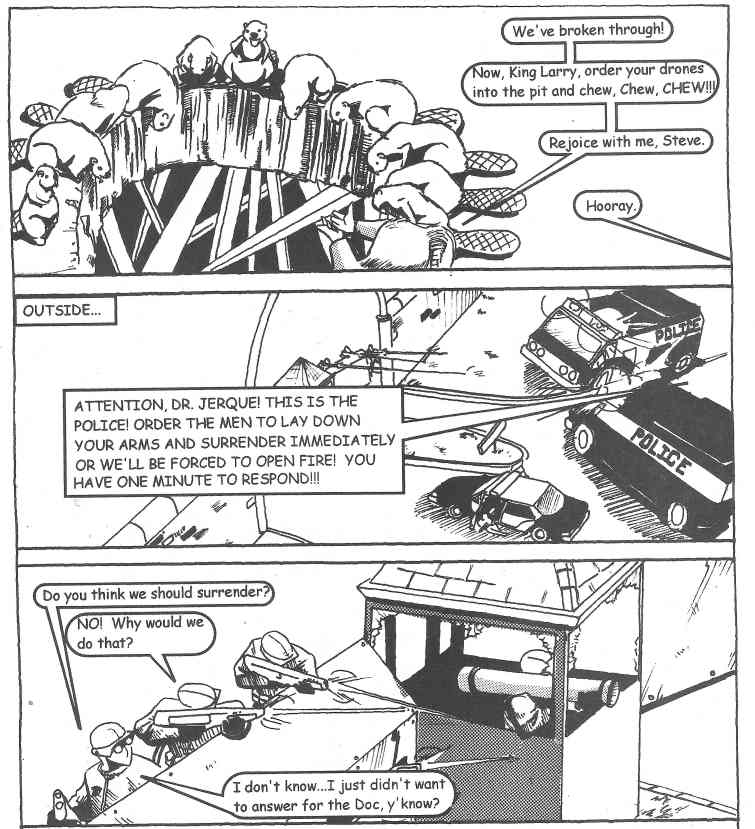 All of which leads to the introduction of minor character Sargent Brock Puddleduck, who we will see a bit later on. He’s a hoot. 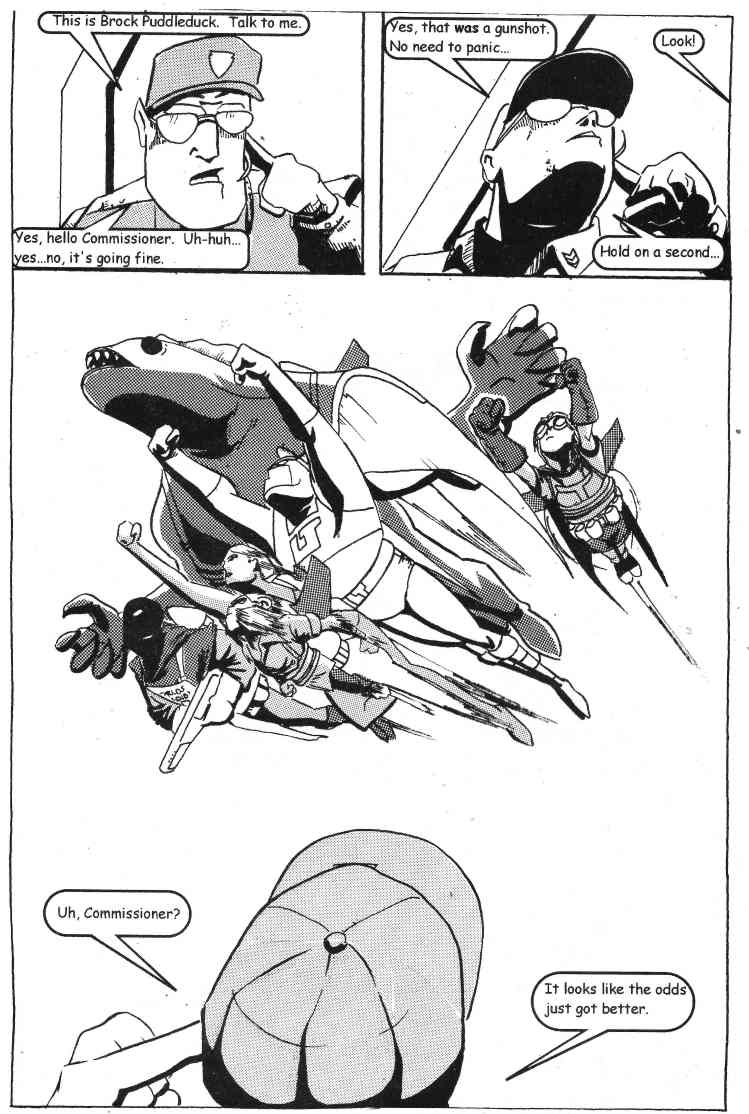 But for us, we have to move on to a battle of epic proportions…with beavers. 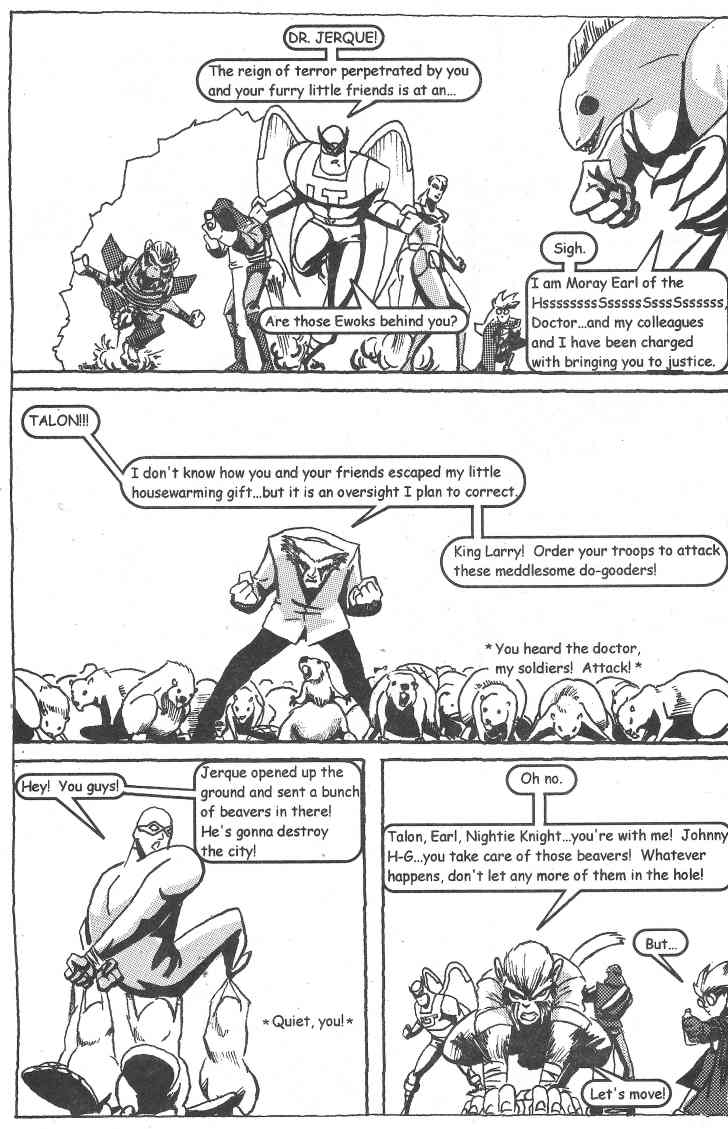 Love how Russell (a/k/a Ugly Monkey) takes charge here. I giggled at both how Dr. Jerque's character stance and The Surprise’s bound embarrassed form are enhanced by the addition of beavers. I’m pretty much coming to the conclusion that everything is better with beavers. 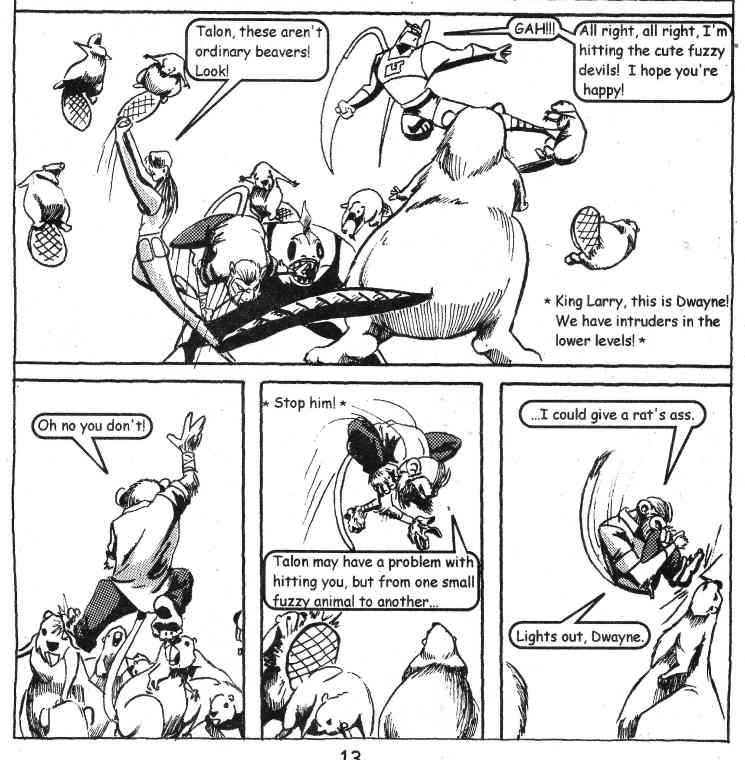 Or this one where Johnny frees the Surprise. (that sounds almost inappropriate.) Note that the beavers get some of the best lines, too. 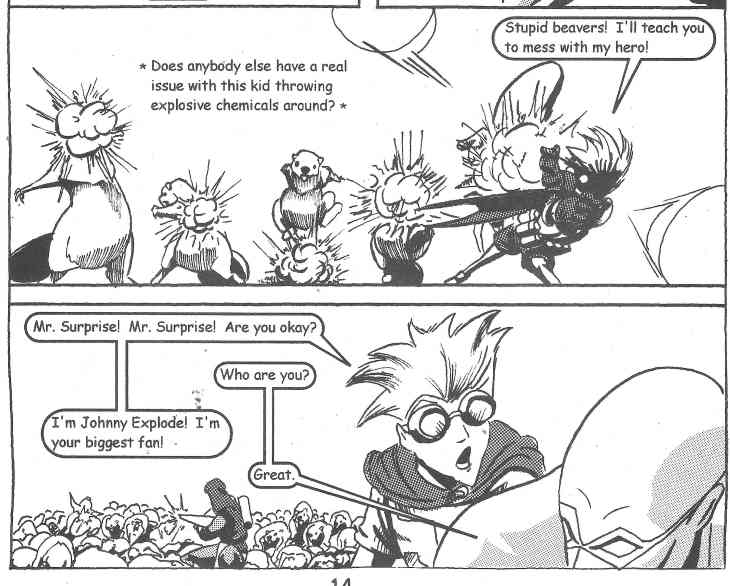 In the end, our seven…uh, guys of justice overwhelm the beavers (first time I’ve ever used that phrase), and Dr. Jerque activates his teleportation device to get away. 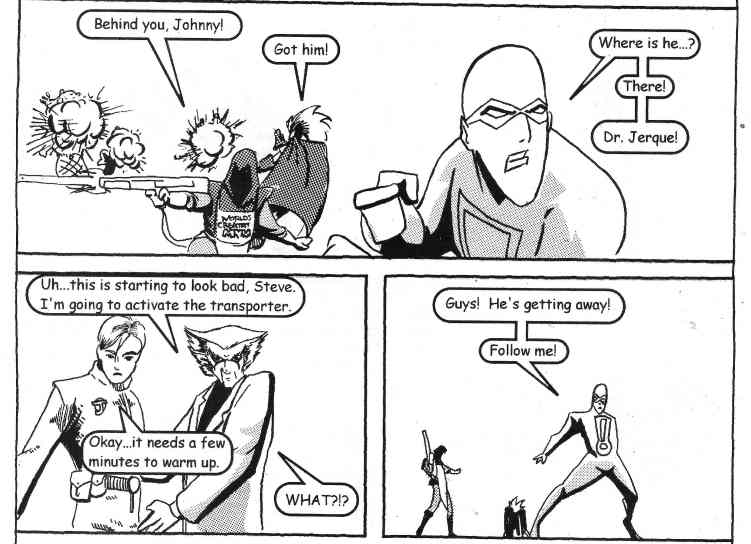 And just like that, Johnny captures King Larry ending the beaver invasion and the Surprise and Hunter-Gatherer move in to capture the Doc and his henchperson Steve. 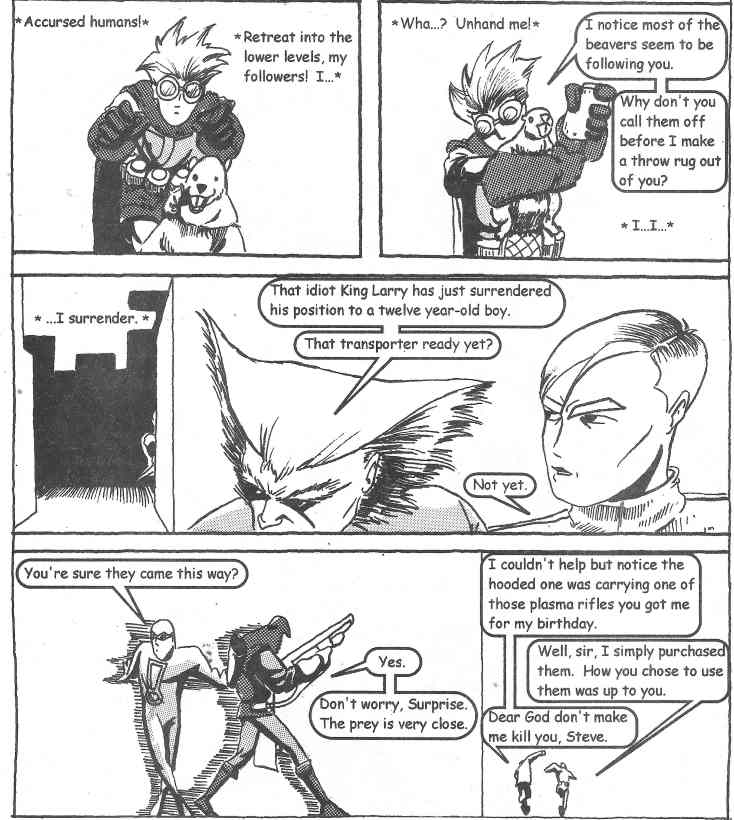 Unfortunately, the damage done to the pilings under the city is too much. Even the heroes can’t hold off disaster forever. Thus the only solution is to book it out of there. 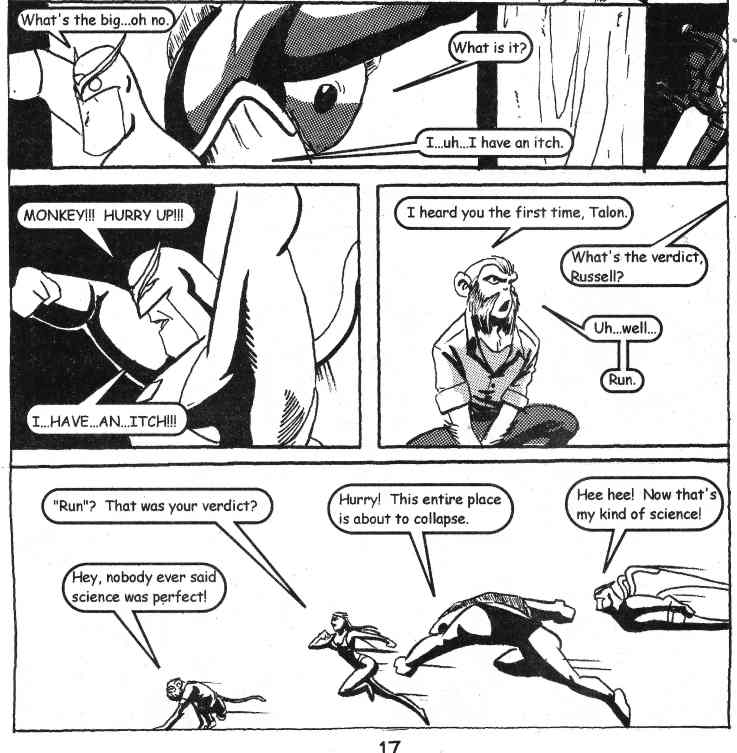 It appears Dr. Jerque will have the last laugh after all… 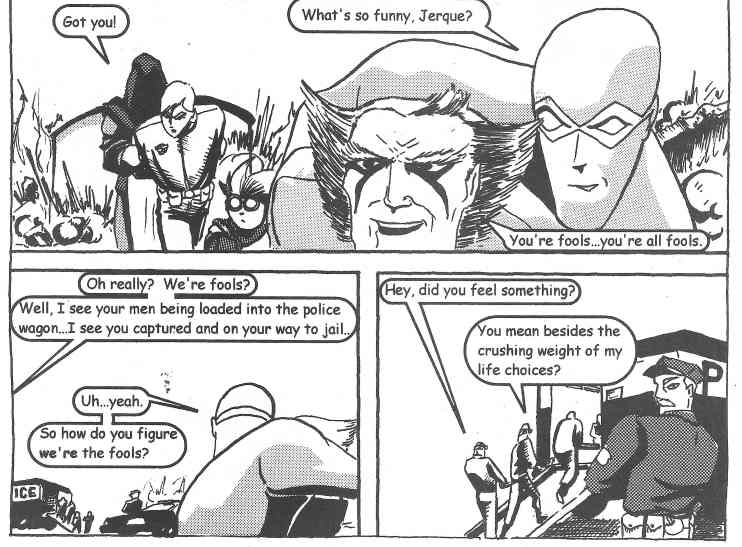 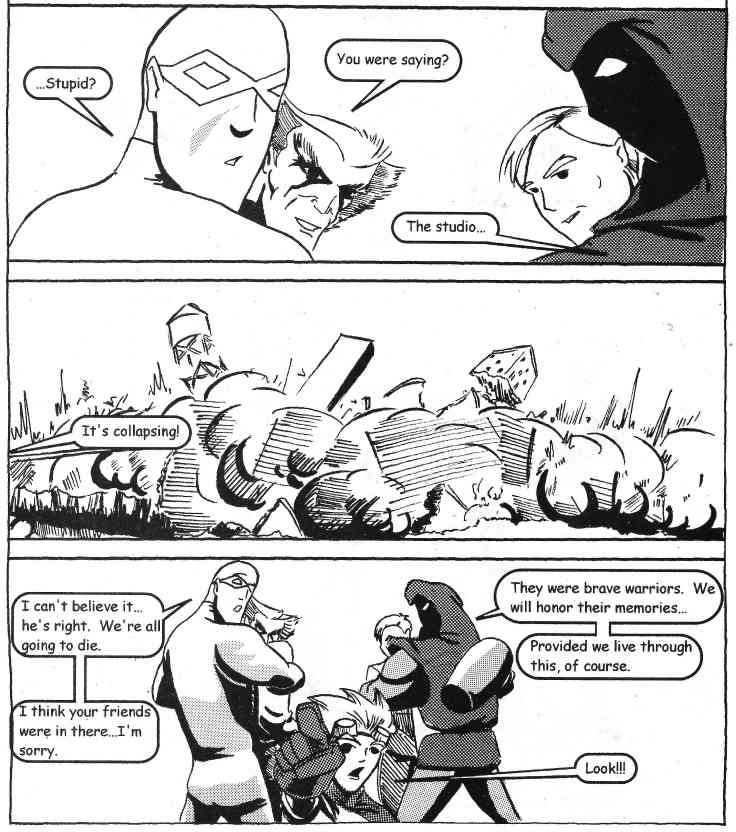 …and possibly Monkey, Talon, Earl and uh..Nightie along with it. 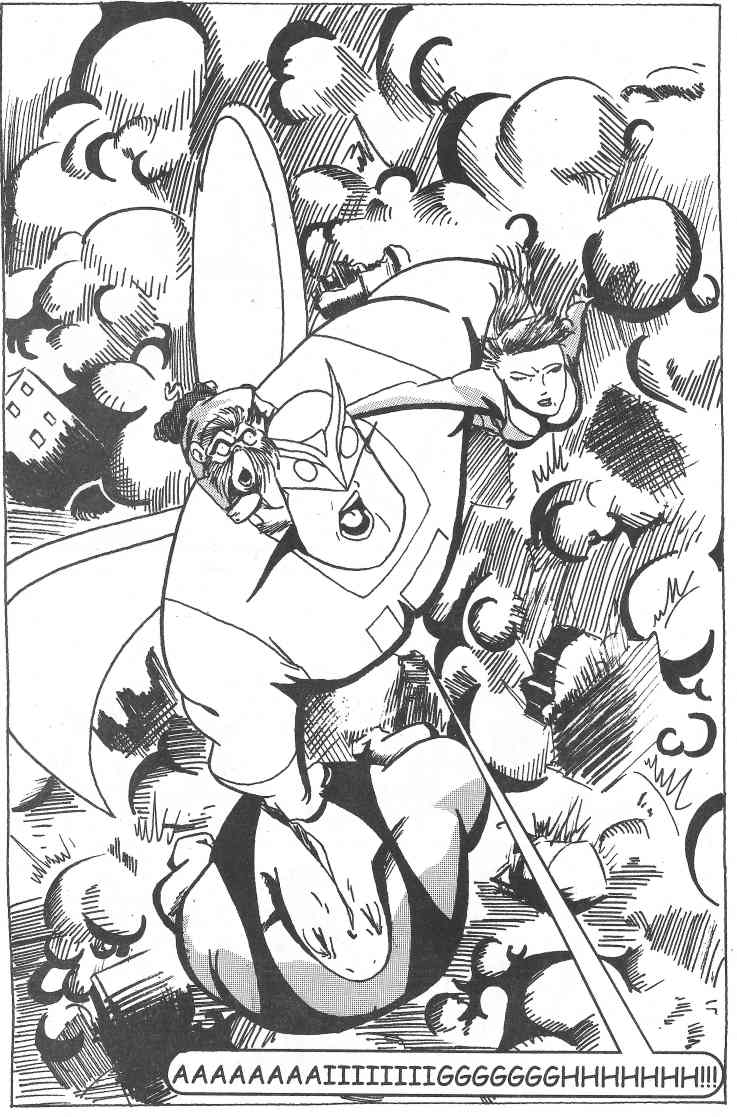 Wait! Of course, they aren’t dead. Mainly because they have to give the explanation as to why the whole city isn’t destroyed, just the studio. 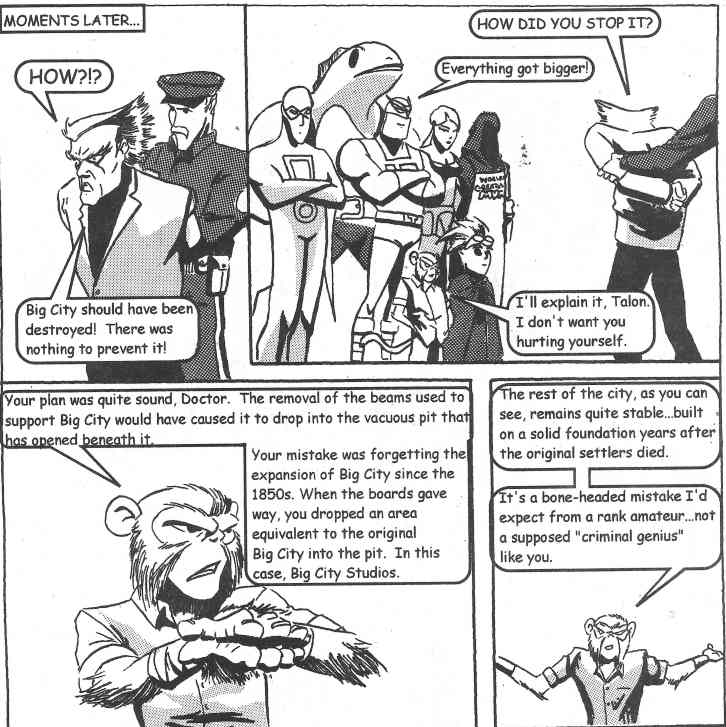 But Jerque has the last laugh, because his teleporter is finally warmed up. 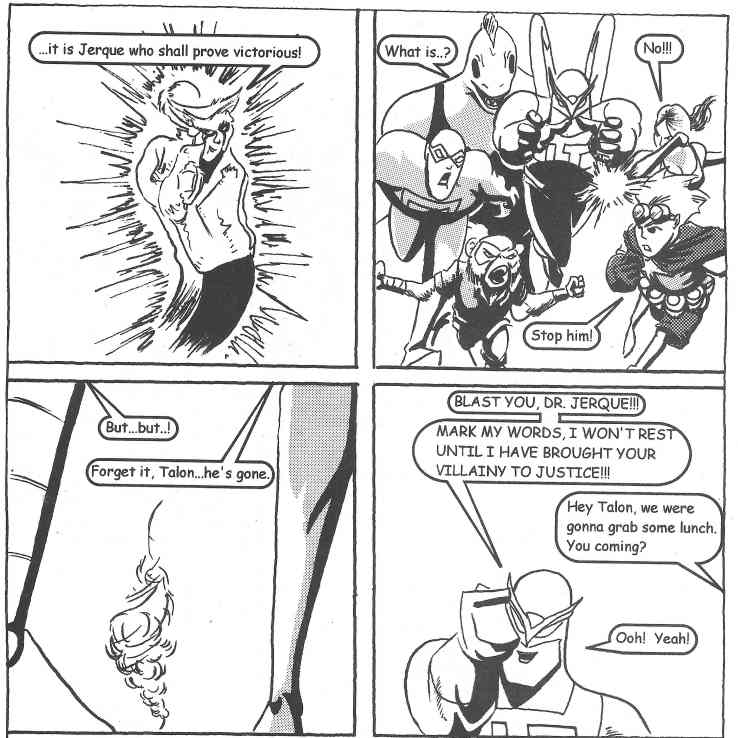 Days later, at an event set to unveil the heroes who saved the city, Nathan Explode calls them the Seven Knights of Justice. The name sticks, and the group decides to take that on as a title. Unfortunately, they elect Lord Talon as the speaker for the event… 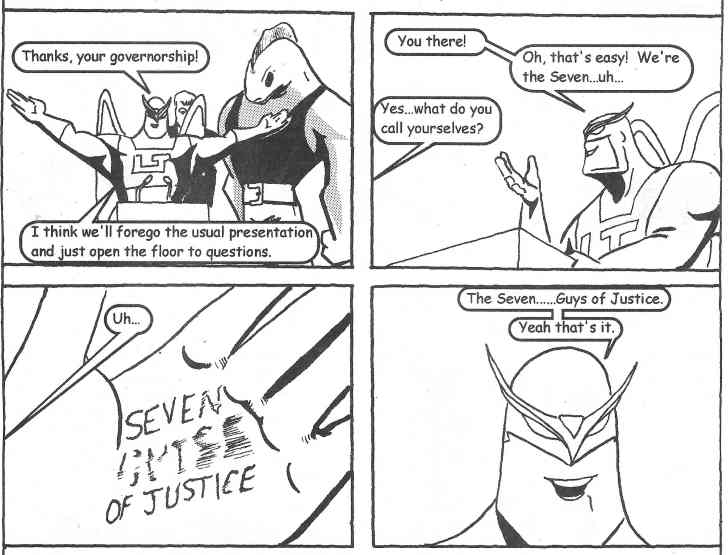 Then we get an entire nine-panel page of “coming attractions”… 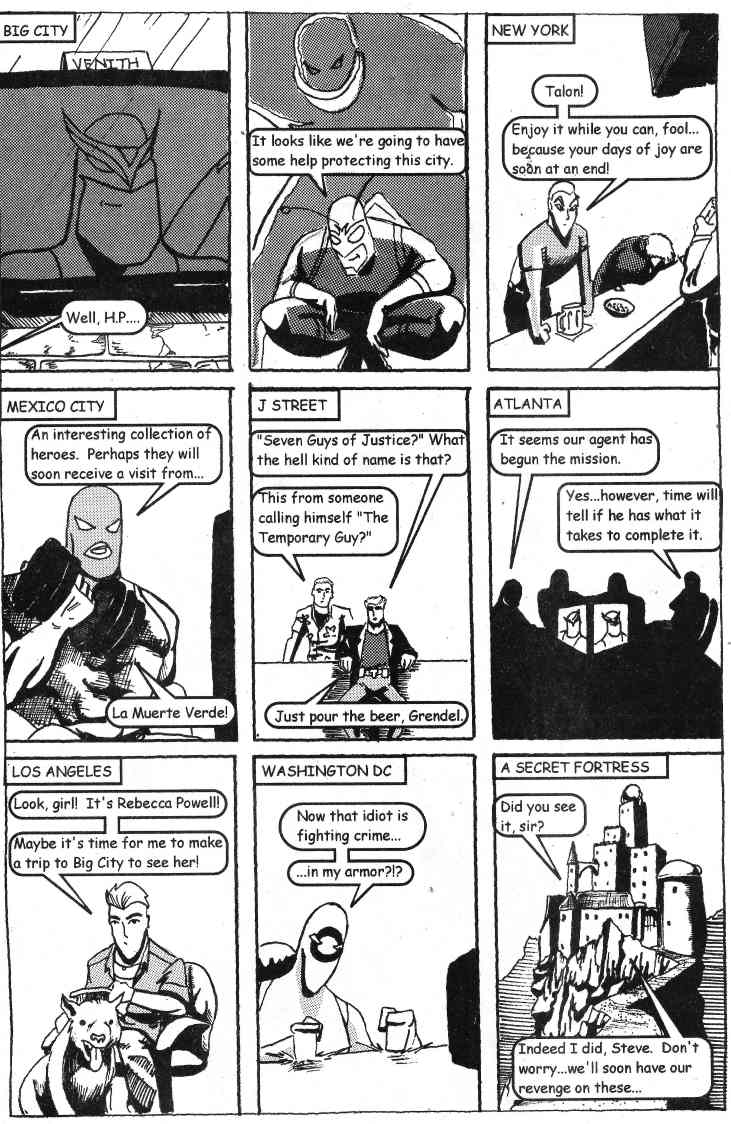 …which I love since it shows Joines isn’t resting on a singular idea for the title. Not to mention, some of those look intriguing. 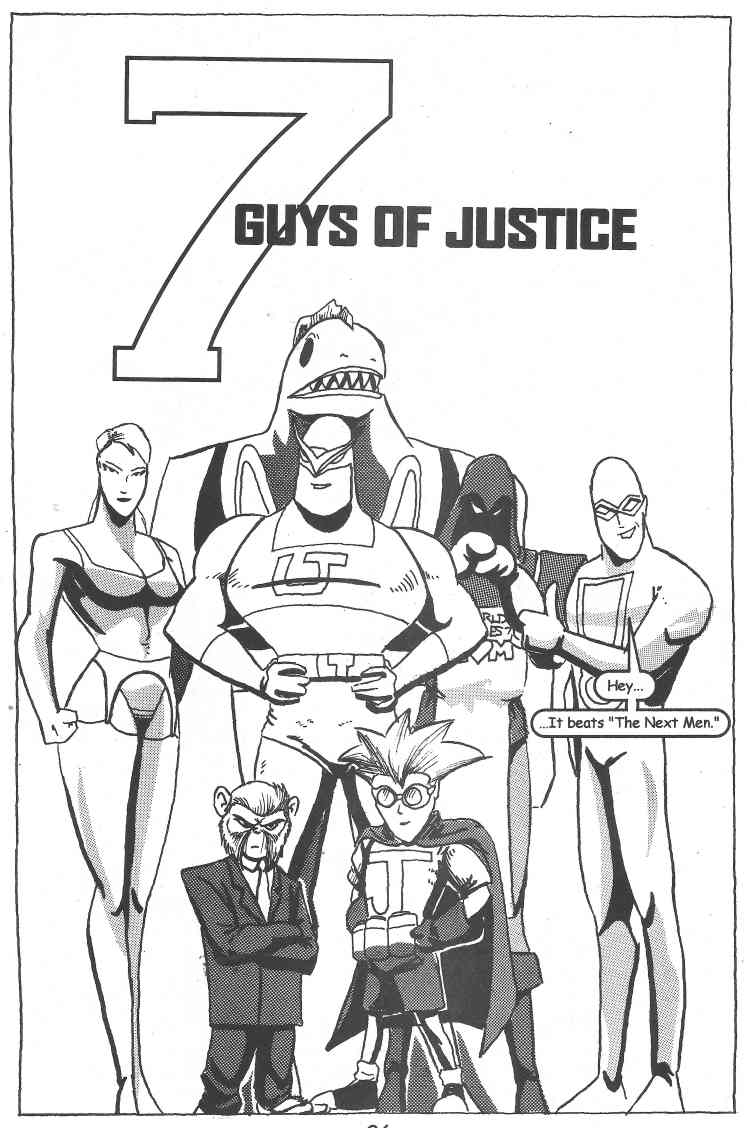 And I have to agree with the Surprise here.
The book features three ending pages of the script that kicked off the idea for the group a coming next issue blurb and this four-panel bit as you exit. 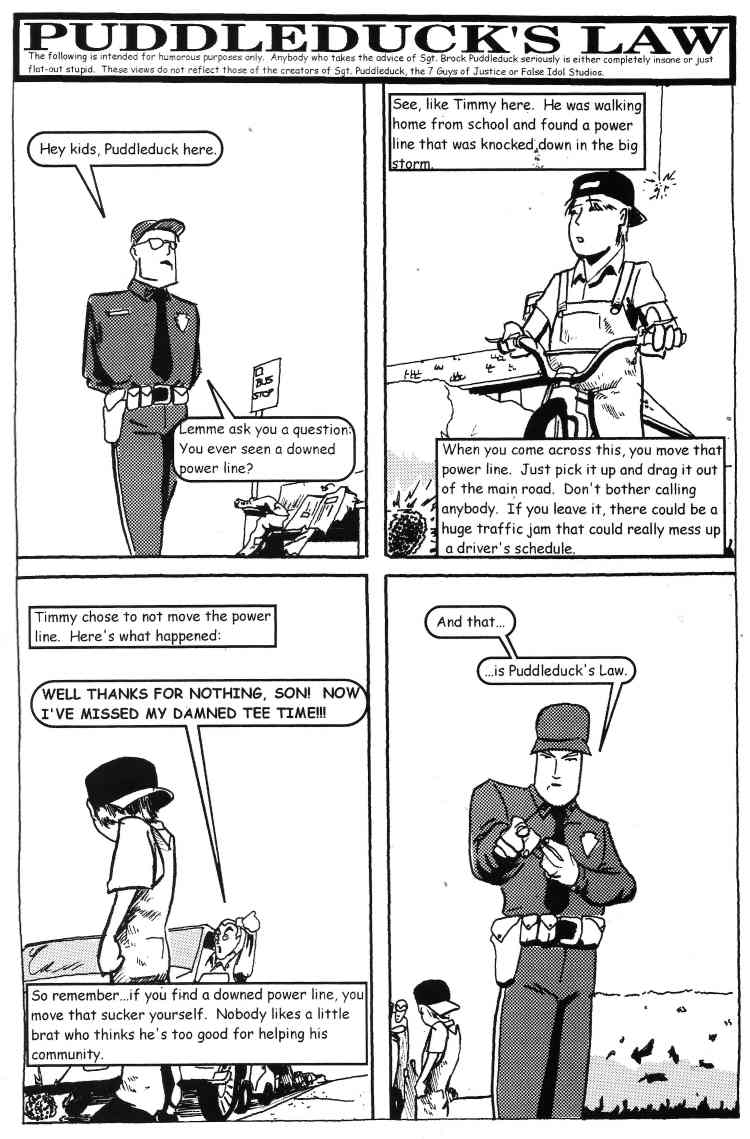 So, yeah! Kinda loved it. All of it. Nobel Causes is looking more and more like a book I’ll have to pick up, not only from the Graveyard Shift’s creative team working on it, but now Brian Joines as well. As for more of the 7 Guys? I’d read ‘em, just not too certain how plentiful they are.

These are Forgotten Heroes, remember?
Posted by SonOfCthulhu at 2:50 AM