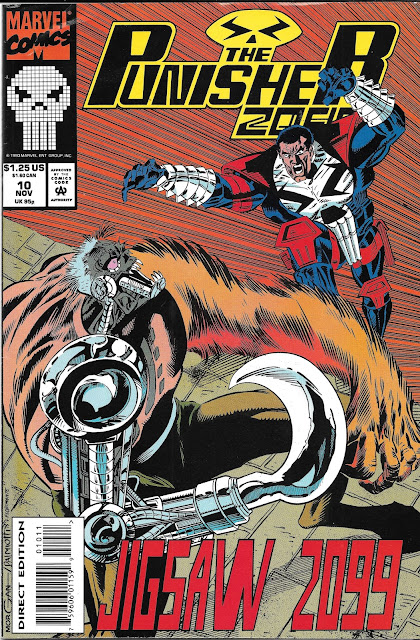 Upgraded characters for a future world

I'm a sucker for the 2099 universe. Marvel came up with such an odd concept when they birthed it. Imagine every Marvel hero being re-created in a dystopian future ruled by corrupt corporate conglomerates and you pretty much have the idea down.

Oddly enough, most of these versions of popular heroes were more fun than the current runs of the icons from which they sprang. Usually because they took the stale concepts of several of both the heroes and their villains and re-imagined them in an inventive manner. Take 2099's Punisher and Jigsaw as an example.

In 2099's 'verse, The Punisher was private security cop Jake Gallows. Jake's firm provided police protection on a pay-as-you-go basis for citizens of the future. He is traumatized by the brutal slayings of his Mother, brother and sister-in-law. While recovering from their loss, he finds a copy of the Punisher's war journal and follows Frank Castle's final words. To wit: "You who find this, I charge you to carry on my work."

And carry on that work Jake did. Armed with a "power bat" that can vary its density from hard rubber to solid titanium and a butt-load of guns, knives and future "you name its", Jake tooled around preventing neighborhood crimes. Specifically crimes committed against those who couldn’t pay their police protection bill. He also went after those who used their money to get away with crimes.

So basically the Punisher in the future with a bat.

His major enemy was a gent by the name of Fearmaster who could mutate people's faces with his hand. Fearmaster had a few henchmen of note, one of them being a dude by the name of Multi-Fractor. Multi-Fractor used a power amplifier to get the drop on Jake, but that backfires most stupendously when Jake rams the amplifier into Fractor's chest, killing him.

Luckily for Multi, someone wanted him alive, even if he wasn't quite the same man when they brought him back. Taking a page from the Tim Burton – "You see what I have to work from here?" page a' la Batman 1989… 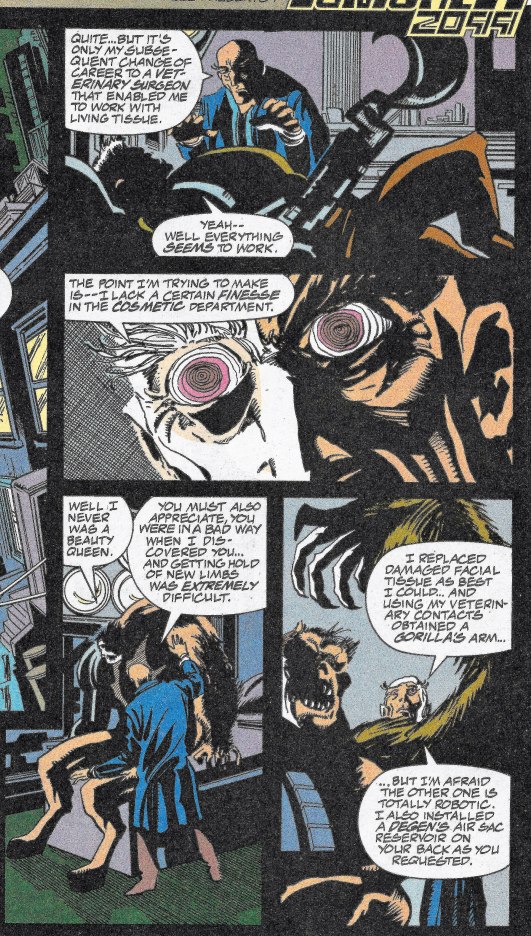 ...we have an ex-mortician turned veterinary surgeon operating on a dead guy and replacing parts of him willie-nillie with whatever is lying around. A gorilla arm, giant can opener, goat legs…you know? The usual stuff.

And just like an old 12 inch action figure, it comes with an easy to read display to show how much power his new "hyper-driver" power amplifier is giving his body. 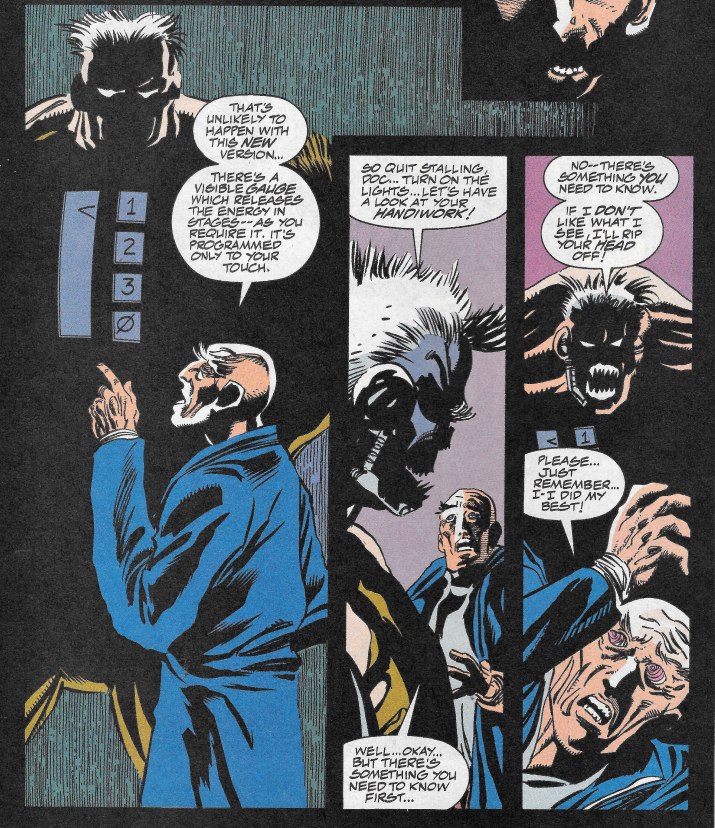 Ladies, avert your eyes as I introduce you to Jigsaw 2099… 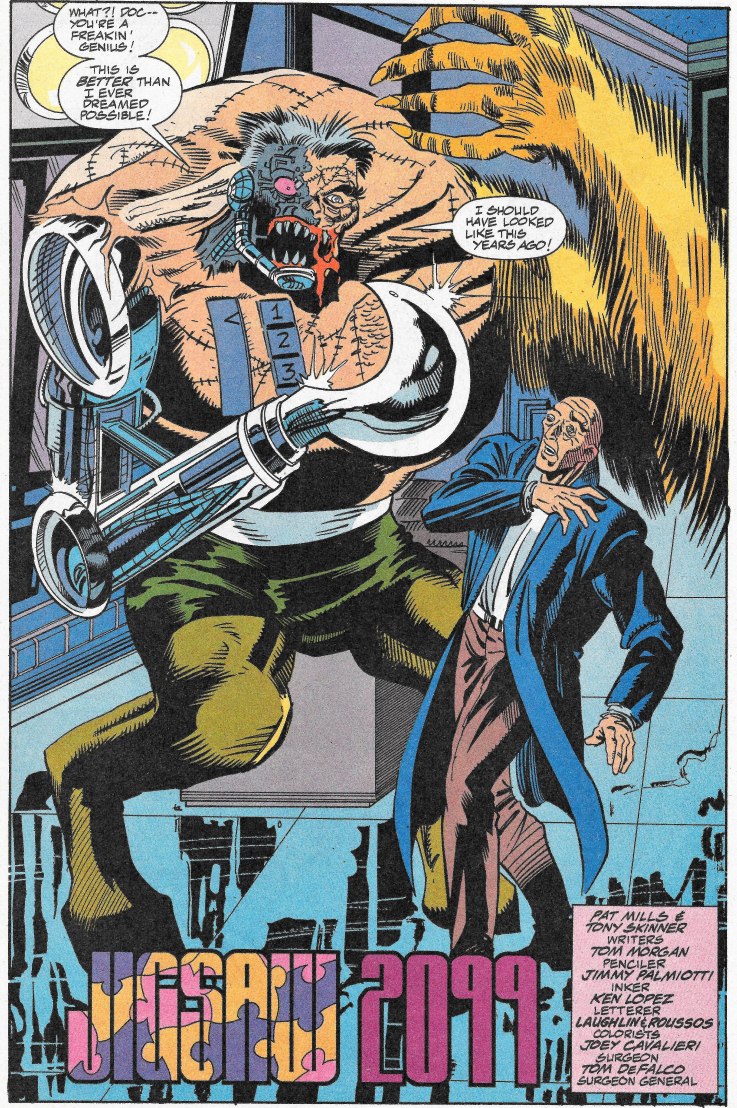 Multi-Fractor thinks he looks GREAT as the new Jigsaw 2099, so you can tell right away that he's off his freaking rocker. Let's see how this will work against Jake, shall we?

First, however, Jake has to finish up with "Sky Boy," a member of the Young Blades gang. 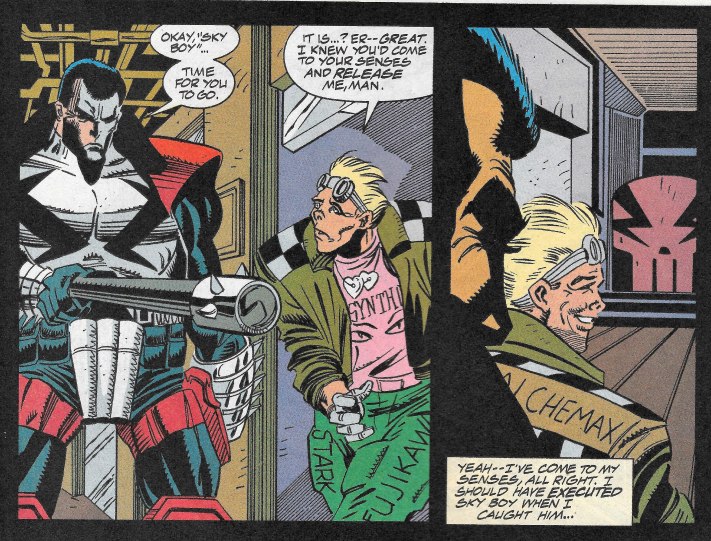 Punisher 2099 has made his final judgment of Graham Sky Boy Jones and to give you a hint it, the verdict is not in the youth's favor. What has he done exactly? 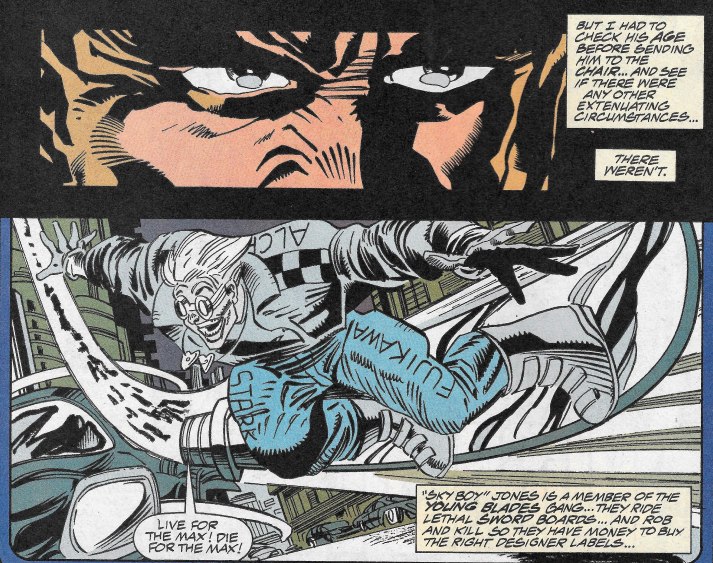 So Sky Boy Jones is a hardened killer, and we all know what that means for his future prospects here.

This is something the future Punisher had over Frank: Frank would just shoot your ass. You did something bad? Bang! Punisher 2099? He would straight up put you in his version of death row. 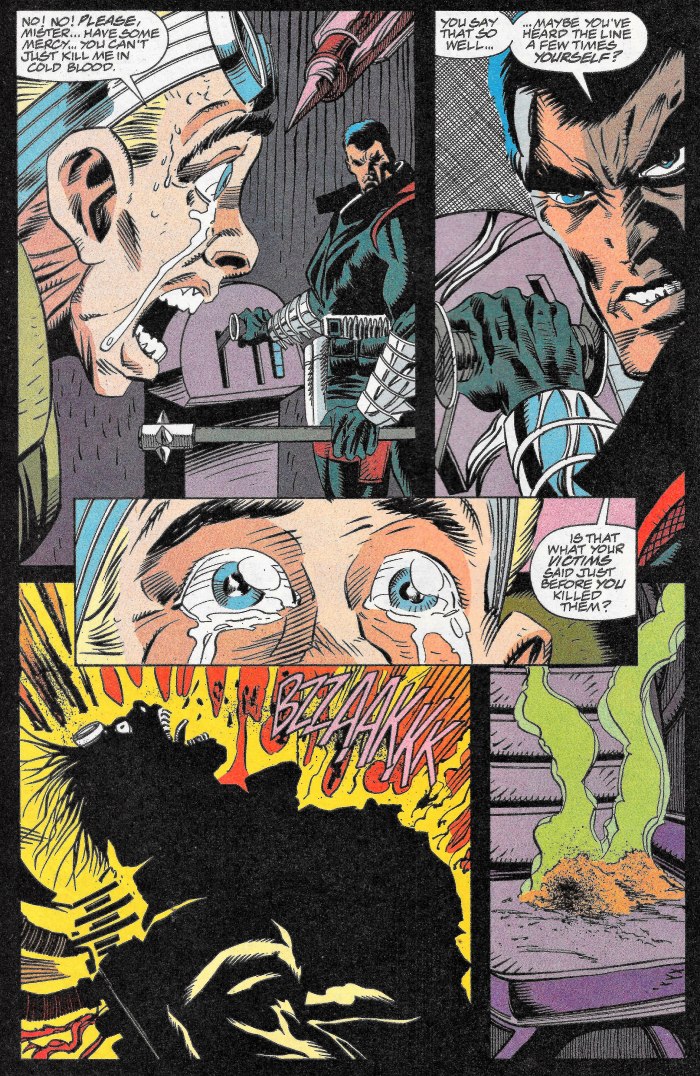 And there wasn't even any clean-up needed afterwards.
Punisher 2099 is a MUCH darker book than regular Punisher, and really that's saying something. His version of Microchip chimes in at this point, asking Jake to see a shrink or his priest or anyone to talk out his problems. To which Jake goes all crazy-eye-stare! 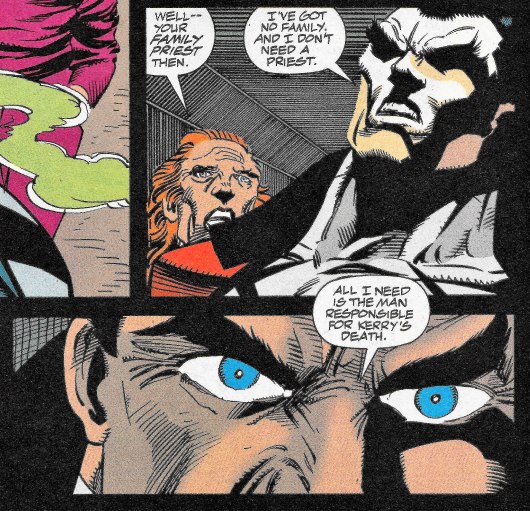 Fractor returns to his old boss, Fearmaster, and the crimelord gives him a new moniker and a new mission: Kill the Punisher. 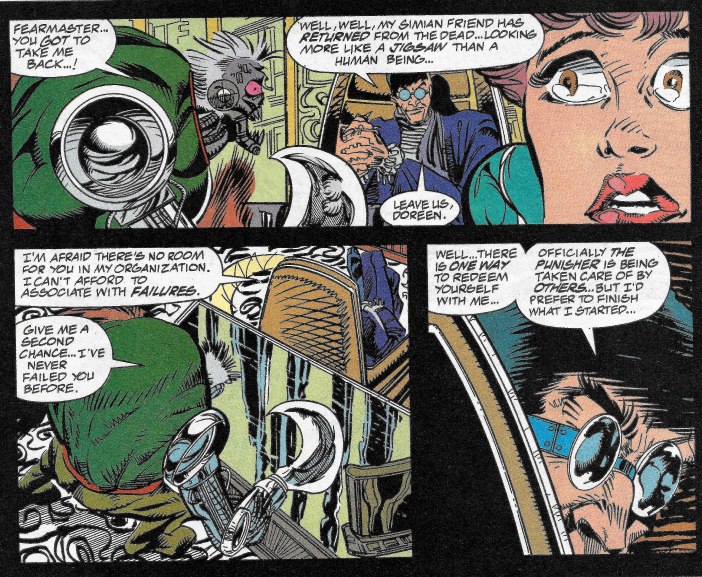 However, Fractor/Jigsaw turning up at his office is a problem for political reasons. Doing so publicly, as Fractor has done, will mean that Fearmaster will be held responsible for Fractor's actions. 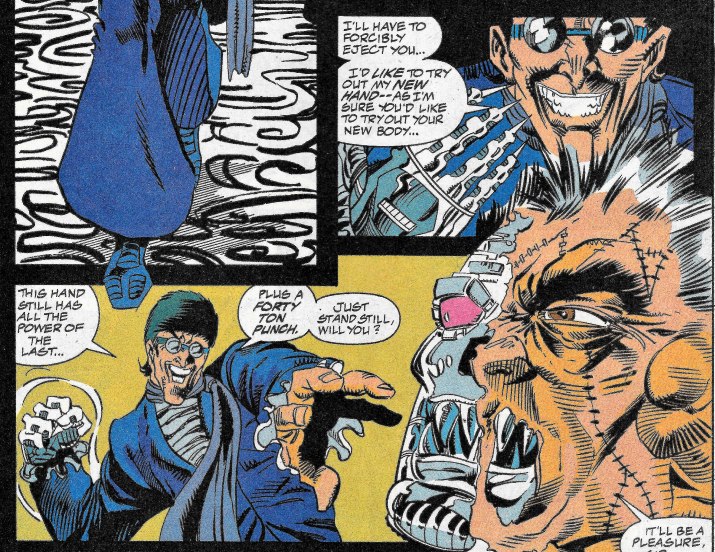 The only way to fix this is to make it appear as if Fearmaster threw him out. And Fearmaster wants to try out his new cybernetic hand anyway, so… 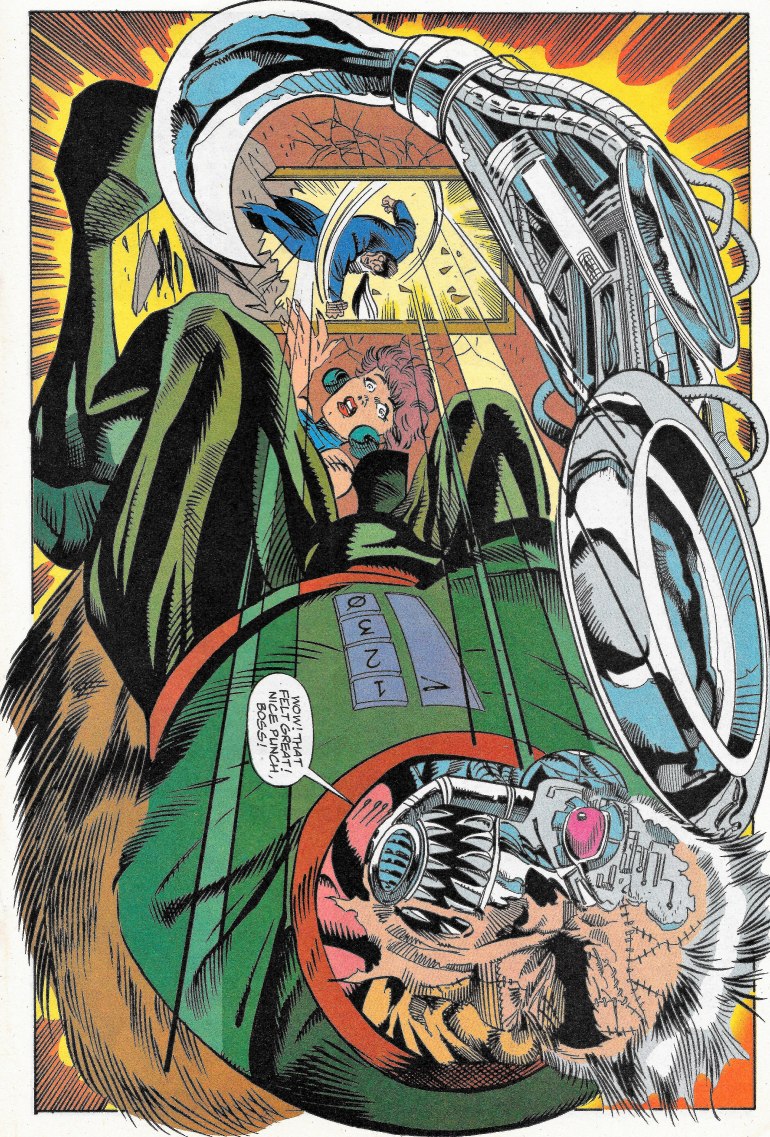 All this seems kind of silly and unnecessary, however I suppose the buildup is that Fearmaster packs the power to take on Punisher 2099 when it comes time for that. It wouldn't be right to make it look like Jigsaw 2099 was the "big bad" in the series since he will soon be knocked down by Jake.

Meanwhile Jake's reverend pays him a visit with an offer that is a little out there even for someone who belongs (as they both do) to the Church of Thor. 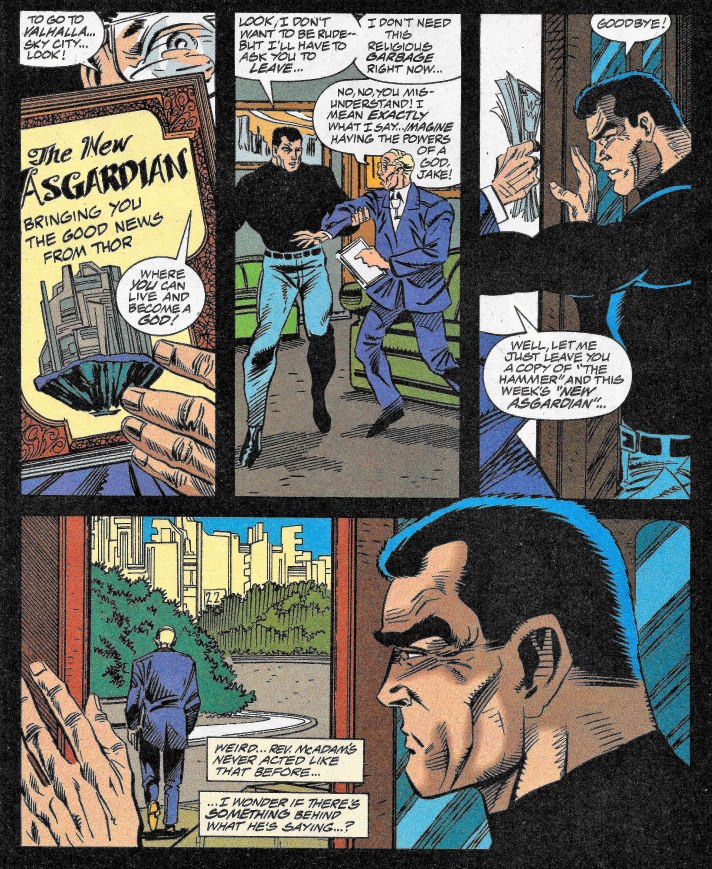 Meanwhile, Jigsaw moves on the plan to draw the Punisher out by tearing up some homeless people in Jake's neighborhood. 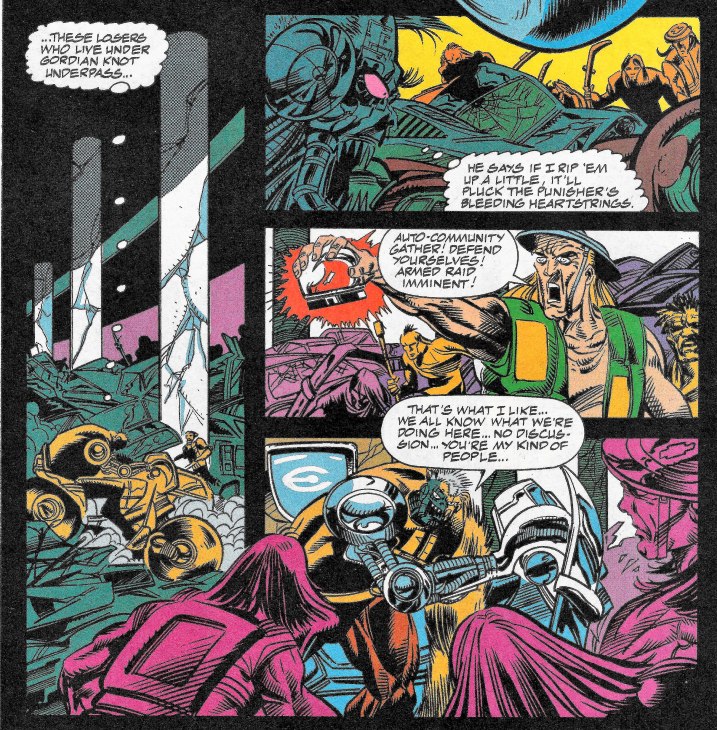 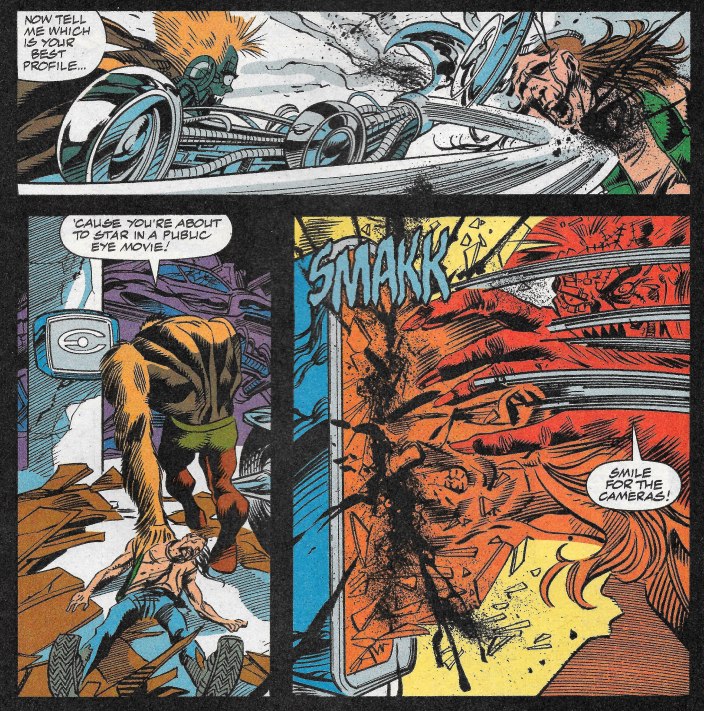 …definitely gets under Jake's skin… 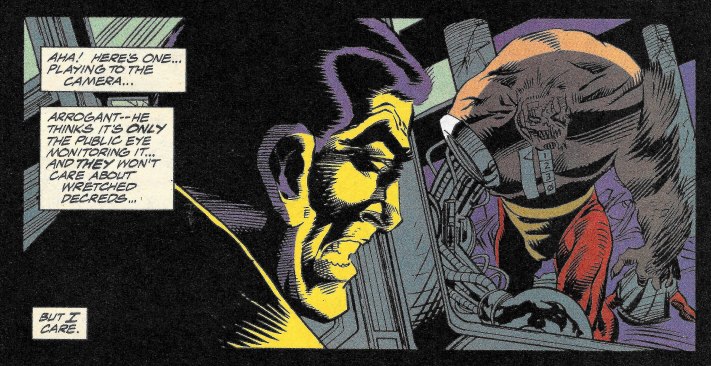 …and lickity-split we have a motorcycle-on-motorcycle battle, with hovering bikes and laser guns and everything you can think of. 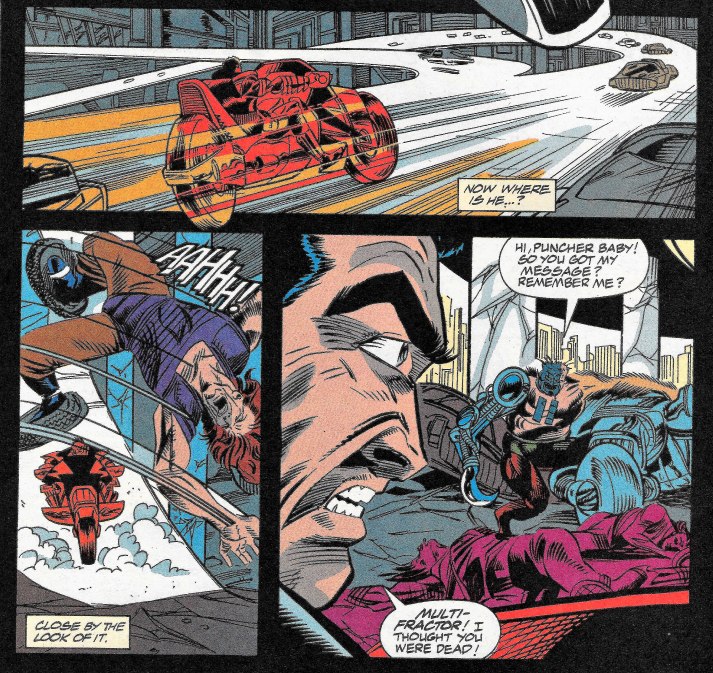 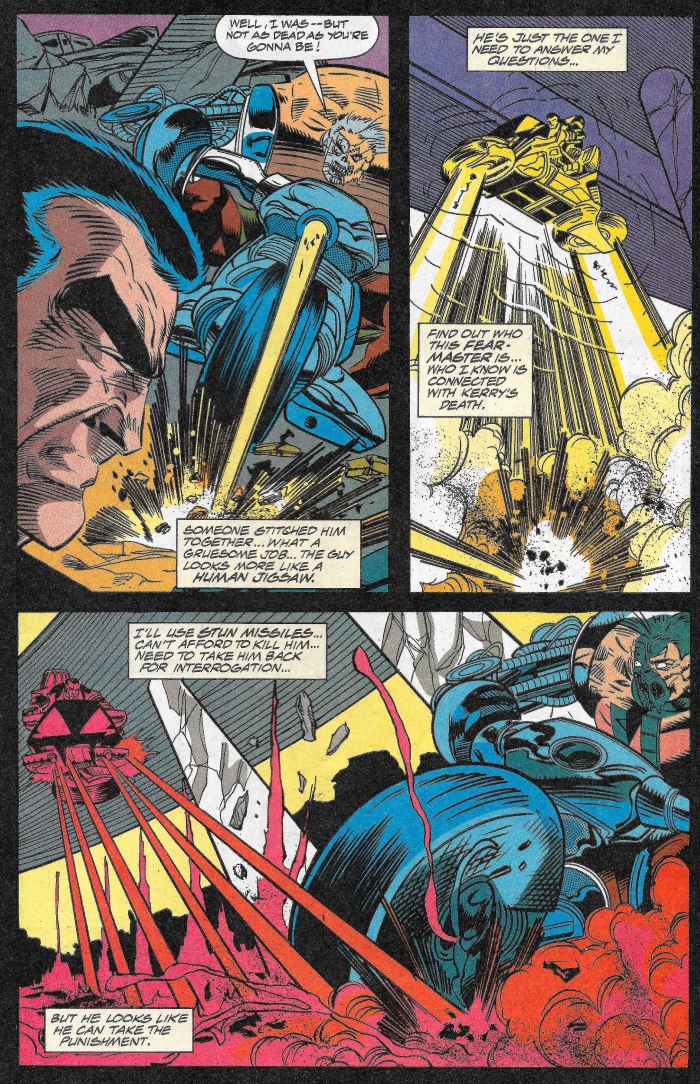 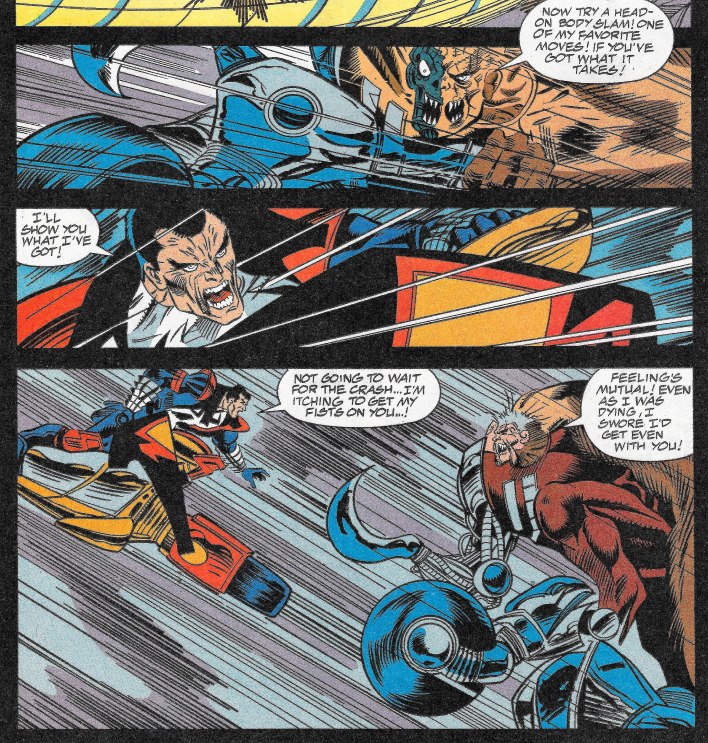 Which comes off oddly more believable in a world of home disintegration machines and cyborgs with gorilla arms. Just look at it: 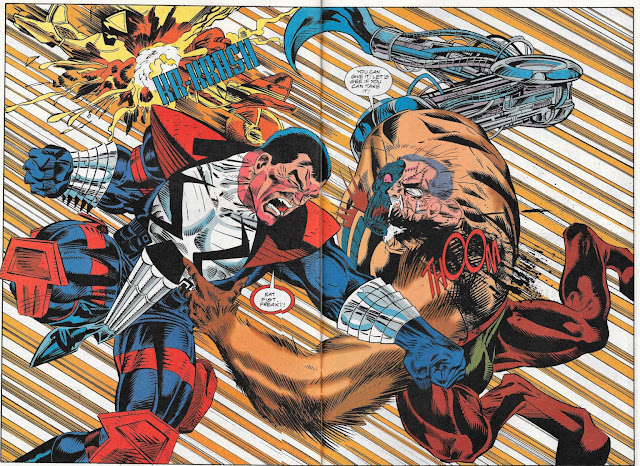 That's a LOT of speed lines.

And with both of them uninjured from something that would kill anyone in real life, we end at the beginning of what looks like a jaw-dropping battle between new Punisher and new Jigsaw. 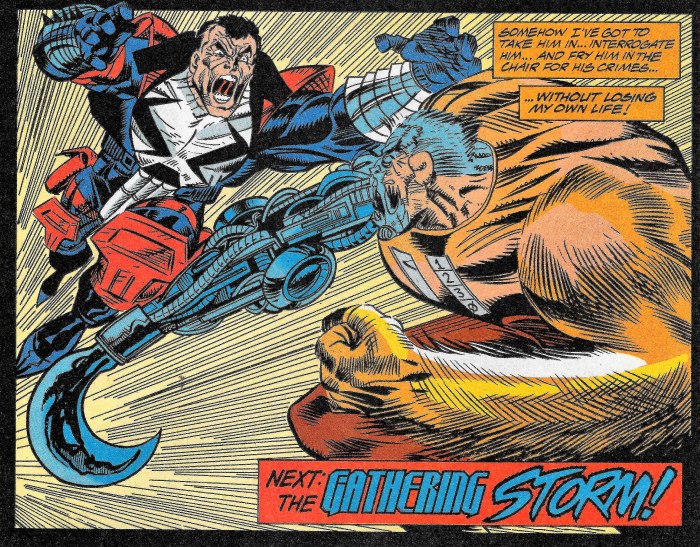 Overall, the 2099 line was a bunch of fun. They could throw out conventional ideas about existing characters and run wild with how they presented familiar superheroes. While the art is all pure 90's and not to everyone's tastes, there were many enjoyable stories here, if you dared to look into the bargain bin for them.

Except maybe Ravage 2099. Give that one a wide berth.
Posted by SonOfCthulhu at 5:07 AM