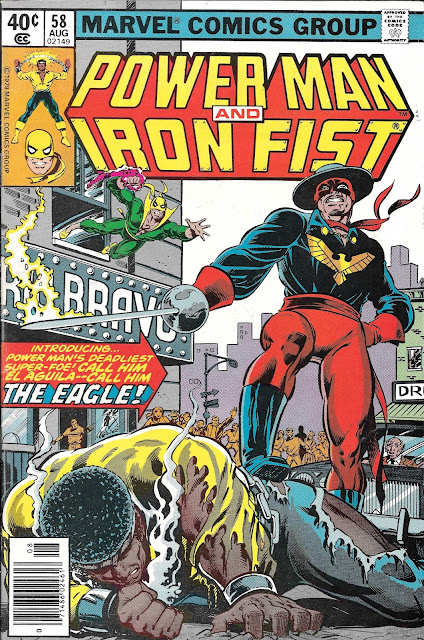 I haven't watched the new Iron Fist on Netflix.

Not because of the negative hype or whatever. That hasn't dampened my excitement for it in the least I just want to savor it. I'm not ready to indulge in the second of two characters brought forward from one my favorite B-lister books from the late seventies.

You see, I had Power Man and Iron Fist books as a kid. Starting with most of the Mary Jo Duffy books. The ones with Fort Worth local Kerry Gammill doing the pencils. I read them and loved them. Years later I'd find out that Gammill and I frequented the same comic book shop off Camp Bowie Blvd.

But that's beside the point.

That point being that I really enjoyed those low-key books that weren't about saving the universe, but were more about keeping the streets safe. They were good stories. I still remember the very first PM/IF book I read.

It was this one. 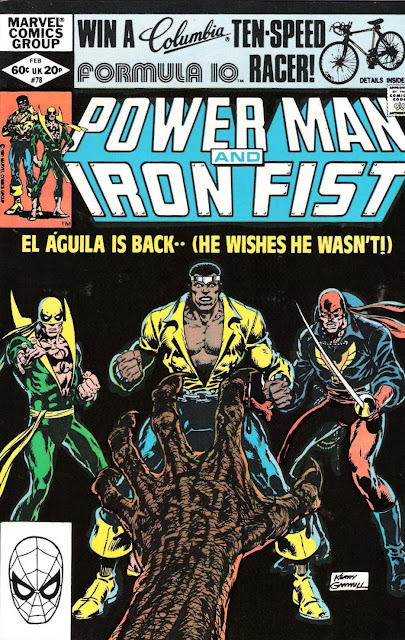 Issue number 78. Featuring El Aguila, the "Illegal Eagle", as Power Man termed him. And a mystery slasher that writer Duffy revealed was Sabretooth in a much later issue. That felt a bit like a cop-out. The potato sack covered slasher should have been his own thing, IMHO. He was a great villain in this issue, with just enough mystery and terror create fright and disgust.

That book is lost to wherever the crapbox of my childhood got placed.

Thankfully, my modern Crapbox spat out this issue to ease my suffering. The first appearance of El Aguila and how that tangle with Power Man / Iron Fist went. Mary Jo started her run much earlier with these, so she's still doing the writing. Mr. Gammill hadn't come on board, but we have the ever-competent Trevor Von Eeden doing a great job on pencils. What's there to love about PM/IF? Let me show you. 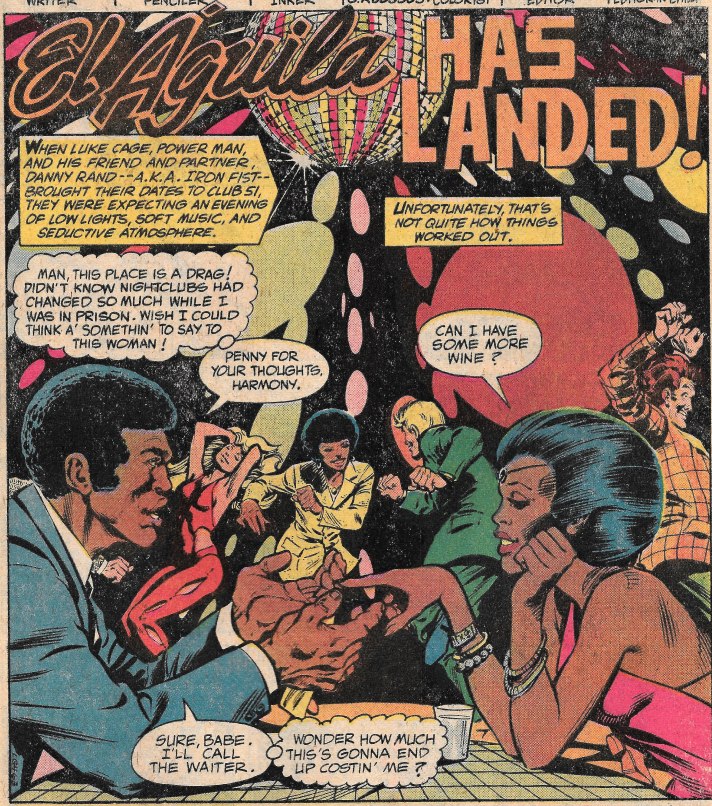 First off we begin with our heroes out on dates at a disco, and everything about this reminds me of why I thought these books were so great. Luke Cage - suave lady's man – doing adult things like drinking with his girl of the moment – at home in the club – putting the moves on her or having the moves put on him? We can't quite say yet.

Danny's in the back, dancing his butt off with Misty Knight.

The entire club is rendered exactly like we, the young impressionable reader would have imagined it in our little twelve-year-old minds, as a black canvas of flashing lights and sound without the hard and fast rules of walls and fixtures. 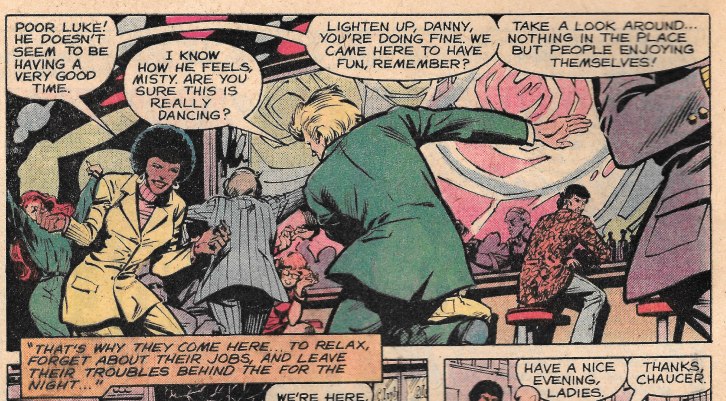 Oh, and about Danny Rand? He's our young person's "in". Daniel grew up in Kun Lun, a city far removed from the civilized world. He's even more an outsider than we were, reading this in our pre-teen years.

To him, everything in New York is a foreign environment, and this club is no exception. Misty explains things to him.
That gives us the dynamic between our two principle heroes: Luke Cage is street smart and always being pursued by the ladies. Daniel Rand is naïve, a real fish out of water who harbors a deep devotion to his friends Misty Knight, Luke and Collin Wing.

Now that we have two panels that define our setting and protagonists, let's throw in our antagonists, whether they be anti-heroes or actual villains. 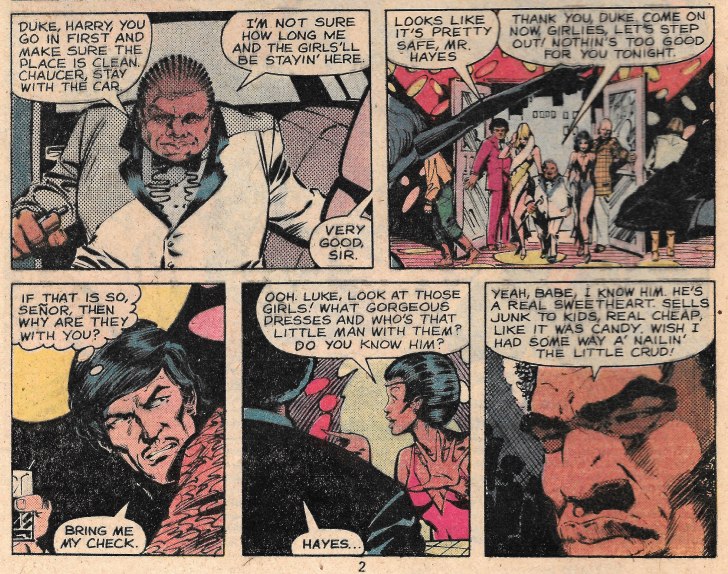 First up is Mr. Hayes, a "little crud" who sells drugs to school children. You can't get much worse than that. Then we have a mysterious Spaniard, who can be none other the El Aguila out of costume. 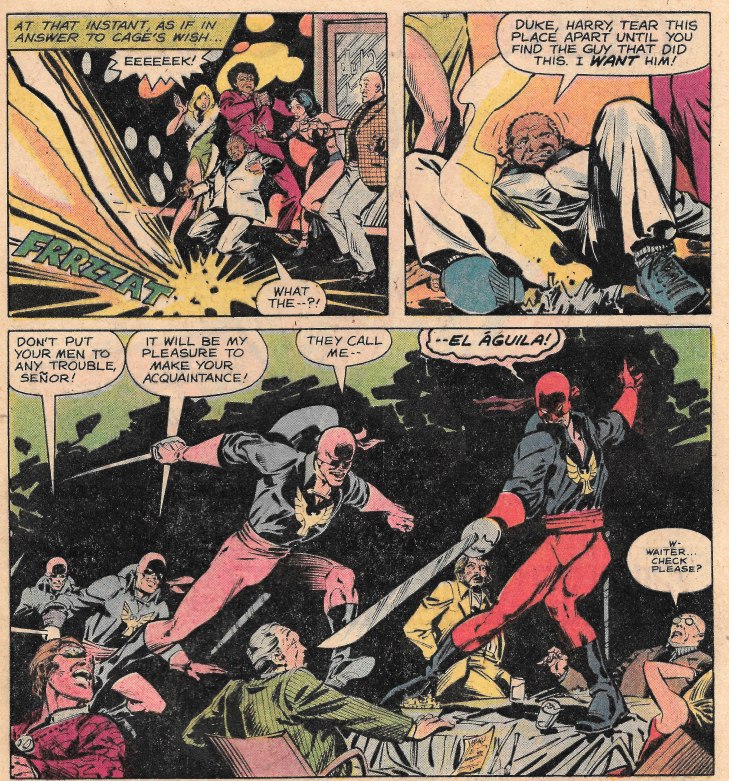 In the flash of an eye (although off-camera) Hayes is thrown backwards by a bolt from an unexpected source. That source leaps onto a tabletop with a flourish of steel and announces itself as El Aguila (Spanish for "The Eagle").

Luke and Danny hold back to see how things play out.

Hayes throws his hired guns at el Aguila, who dispatches them without trouble and then heads off the big man, himself.

I love the Zorro-vibe that El Aguila gives off in this whole issue. He robs from the druglord, his men and his concubines (who willingly give him anything he wants)… 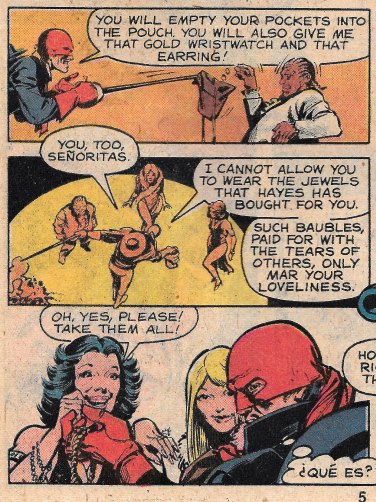 …and he gives to…I don't really know. Maybe the poor? Maybe himself? Although his outfit is red and black, El Aguila's morals are a subtle gray. What isn't gray is blood, which this hood is trying to make El Aguila shed with a carefully placed shotgun blast. 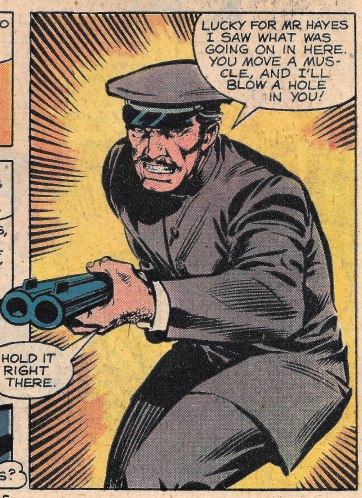 While Aguila is occupied with disarming shotgun-Sam, Fist decides he's had enough and moves to take out one of Hayes' other enforcers. Misty leads a hand too. However it isn't until Hayes himself makes a move on Aguila that Luke Cage decides to step in. 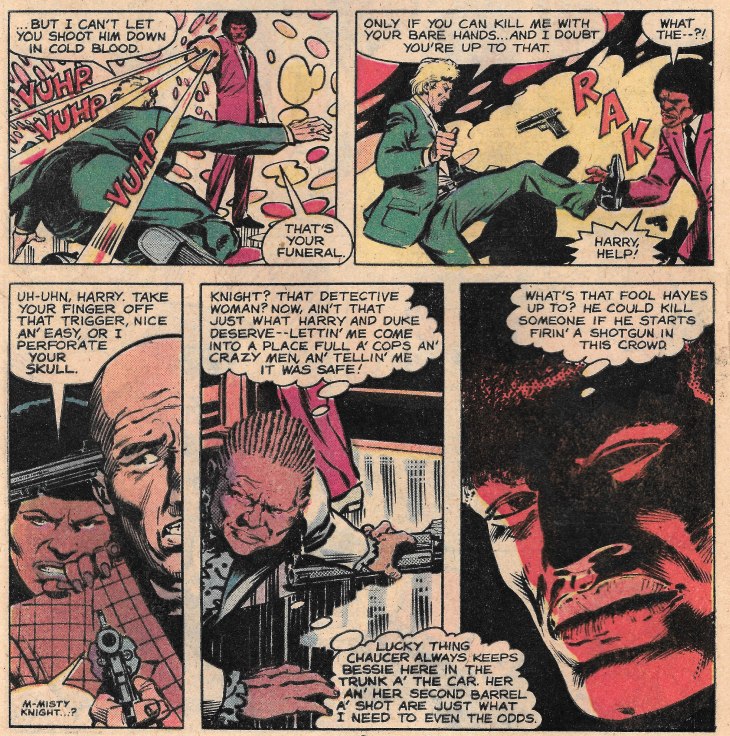 Stopping a chest-full of lead is just going to make Power Man hacked off. And ruin one of Luke's best shirts.

Sadly, El Aguila makes enemies of Cage too, needing the loot he took from Hayes for some unspoken reason. As the Spaniard makes off across the rooftops, Cage vows to make him pay. 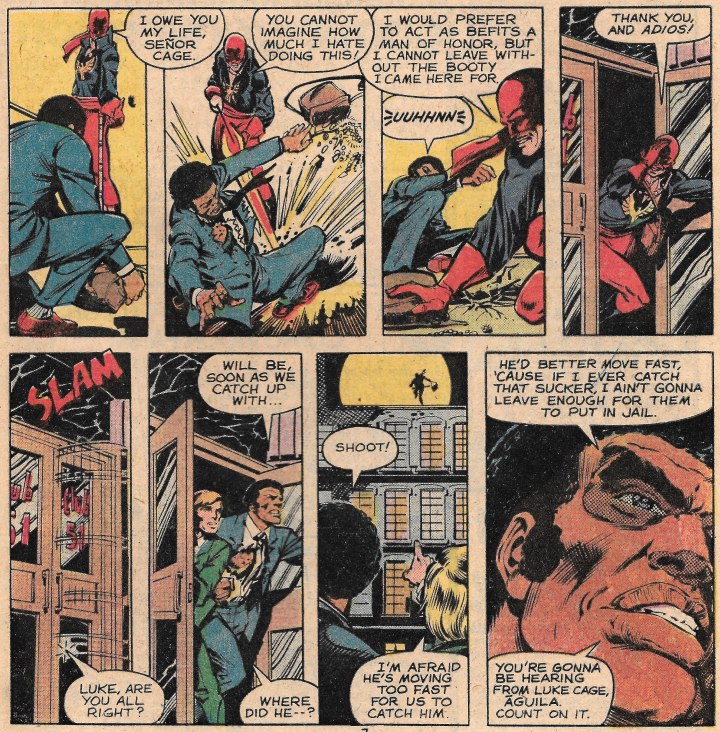 However, that promise may be hard to keep, as Aguila is protected by the people of the neighborhood. Whether that protection is paid for in kind by Aguila's actions or in money, isn't really established. Von Eeden's work here is pretty great though. 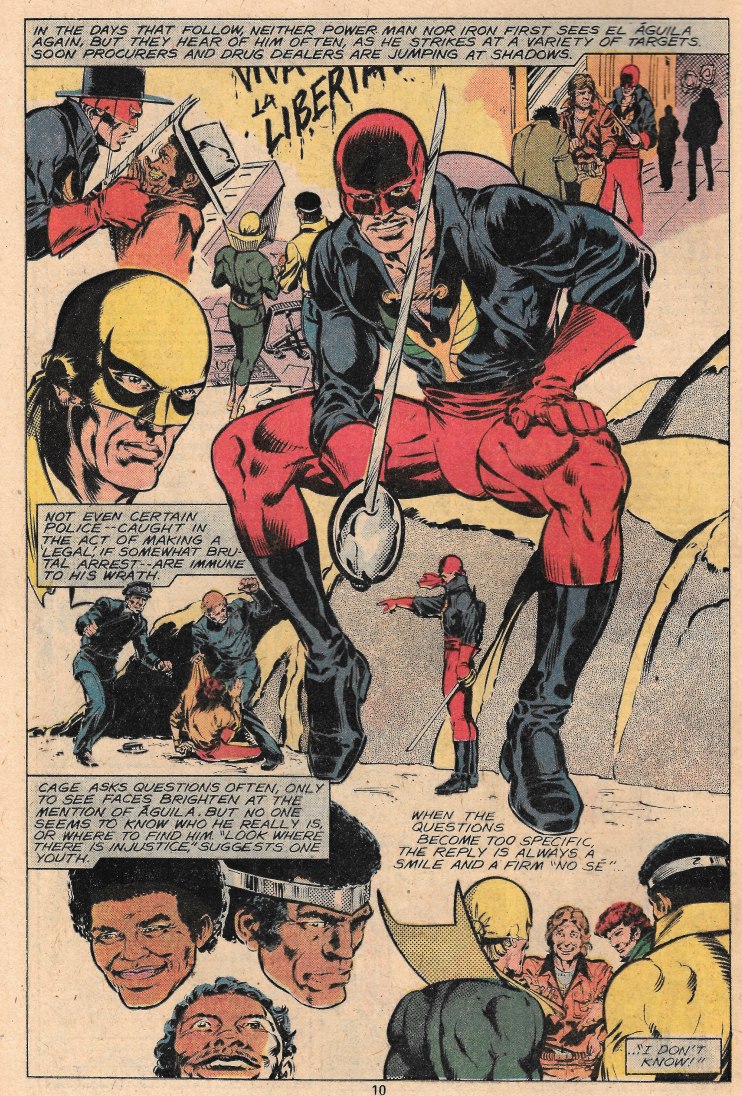 After all the good they hear he's doing, the pair are pretty much ready to give up. Cage's rage even settling to the point of just wanting payment for his shirt getting torn when he saved Aguila's bacon.

But there's always a monkey wrench thrown into Heroes for Hire's fortunes. This time it comes by way of a group of slumlords that Aguila's been hassling. Slumlords who contracted with Heroes for Hire for protection. 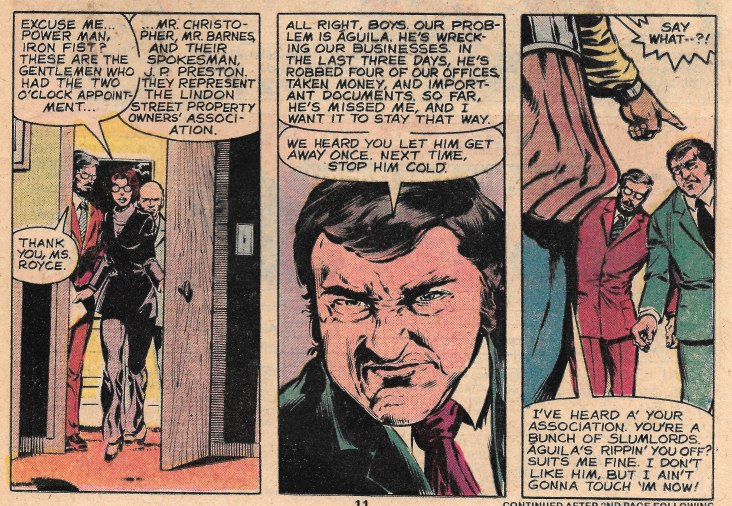 A contract that proves to be unbreakable. 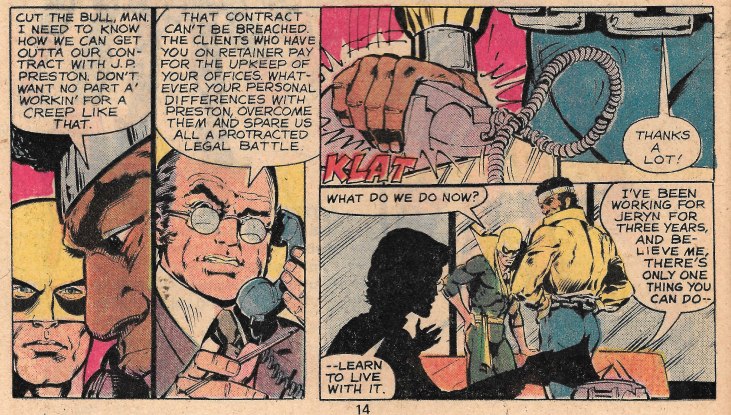 Our heroes grow more despondent the more they find out about Aguila's good deeds, Luke even lamenting that the Eagle is a hero precisely because he gets to go after the scum they find themselves defending. 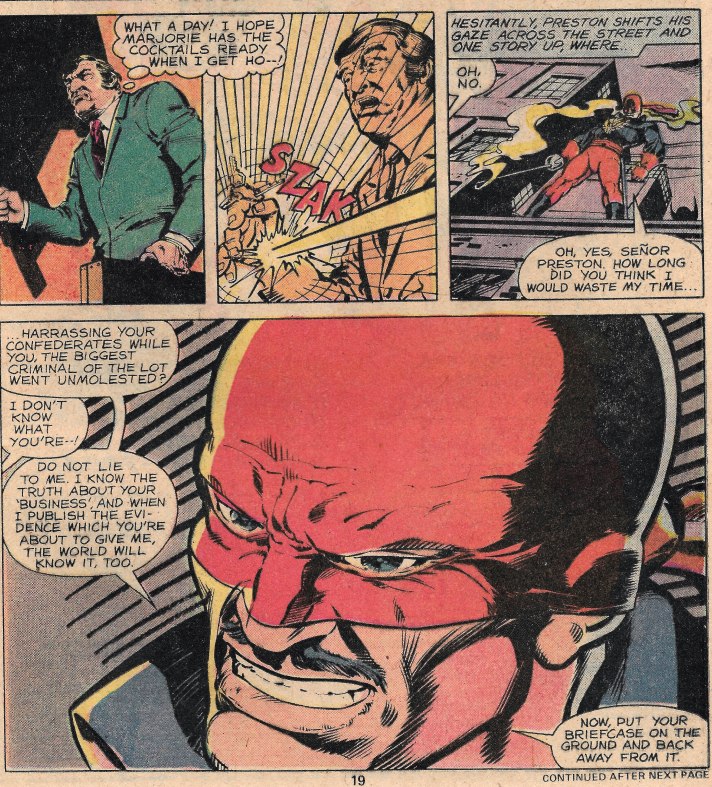 Just as Cage is getting bored following one of the worst of the owners around like a personal bodyguard, Aguila makes his move. He's seeking documents stored in the slumlord's briefcase. A briefcase that is handcuffed to the jerk's wrist. 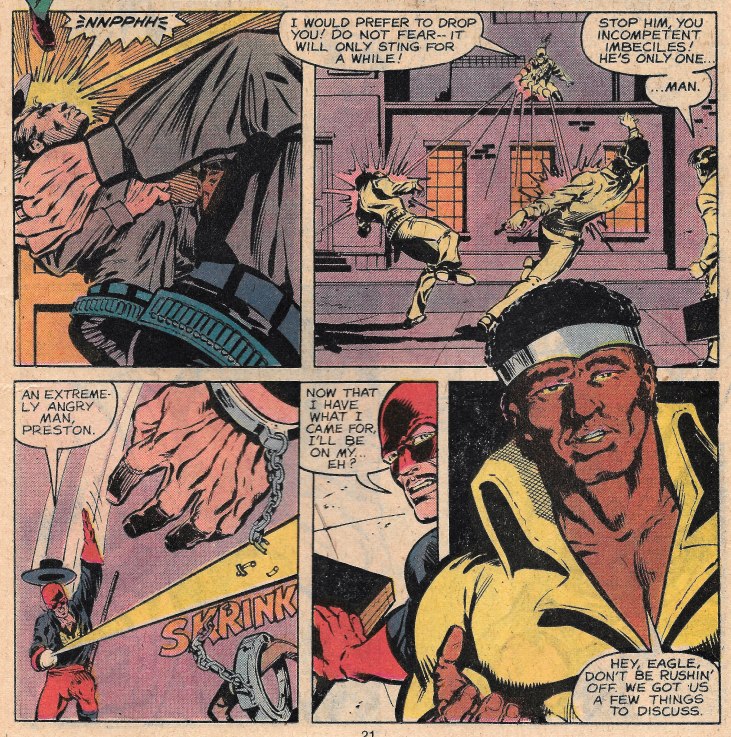 El Aguila is more than a match for that, and for the man's backup guard as well. Sadly, this only puts him more at odds with Luke, who is still chafing at having his honor sold out from under him.

He takes on Aguila's full power, which the blast-happy swordsman is only too pleased to give him. Perhaps even more than Luke's steel-hard skin can handle.

Fist chooses this moment to jump in and take down El Aguila, the pair's plan being that he would stay out of sight until they figured out what the Spaniard had on Preston and his slumlord assoicates. And take him down he does. Hard. 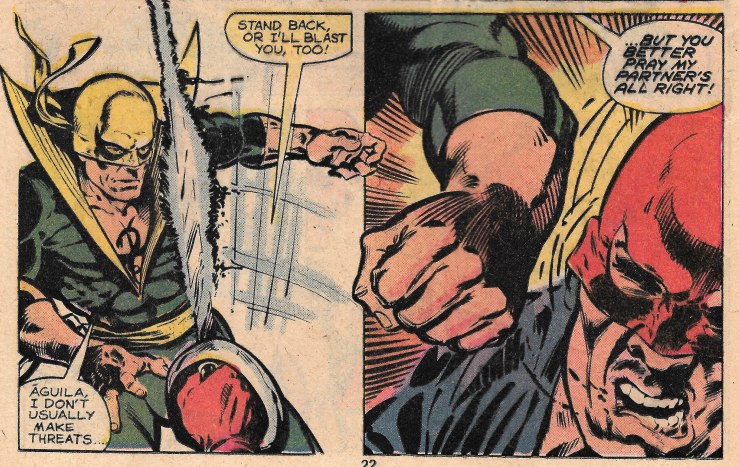 Unfortunately Preston and his boys turn out to be just as dirty as El Aguila made them out to be. Now that they have him at their mercy, they have no thoughts of turning him over to the authorities. Instead they tell Power Man and Iron Fist to take off while they start working him over. 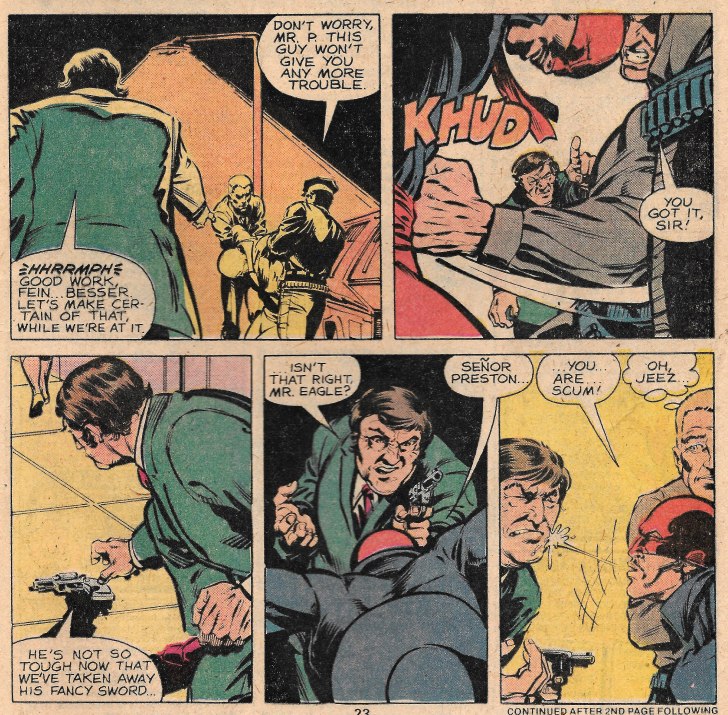 The Eagle looks like he will soon be an ex-eagle, as I don't think Preston is satisfied with just clipping his wings. Power Man and Iron Fist go to intervene and Preston tells them to buzz off with a hail of bullets. I have a feeling he's going to regret doing that. 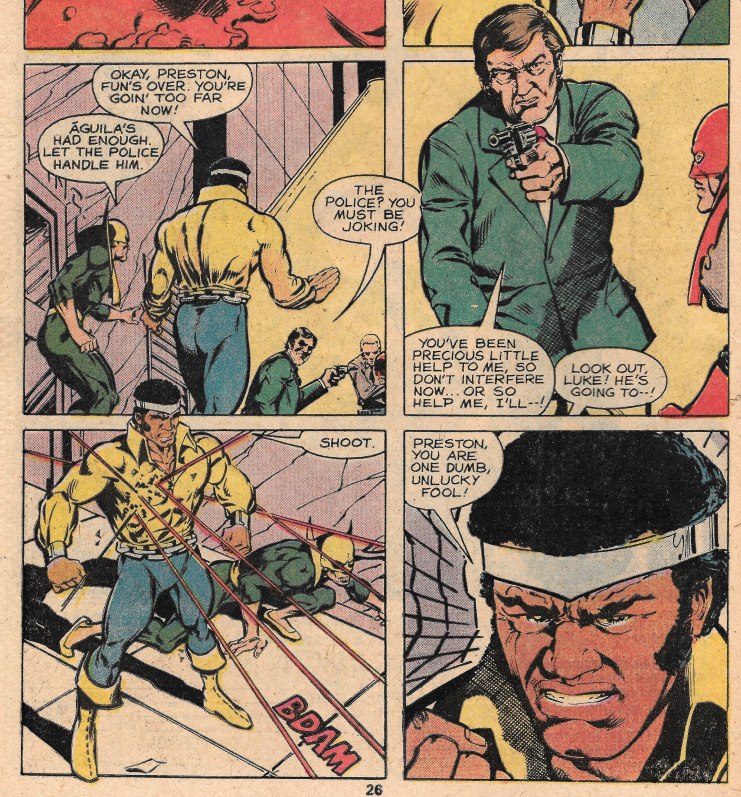 El Aguila uses his palms on the car behind him to zap both of Preston's henchmen as Luke bears down on the scumbag. At that prompt, the Eagle wings out with the briefcase he wanted so bad. 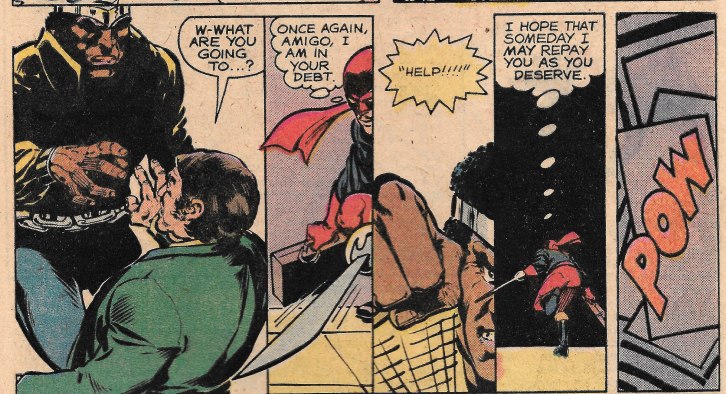 Iron Fist doesn't stop him as he's tied down with the final Preston gunman. 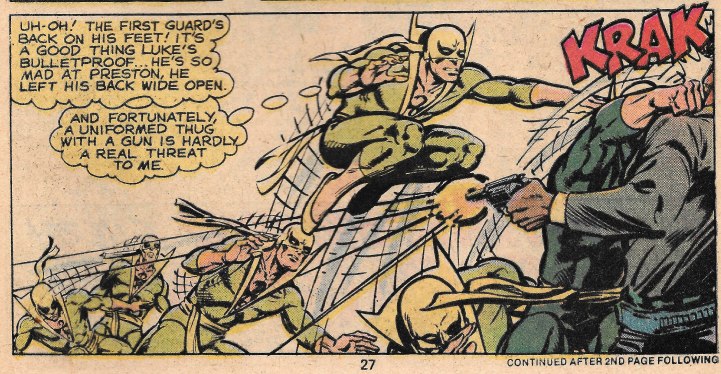 Even after all this, Preston still tries to pull his weight around, but Cage and Rand reverse that whip after seeing his actions this evening. 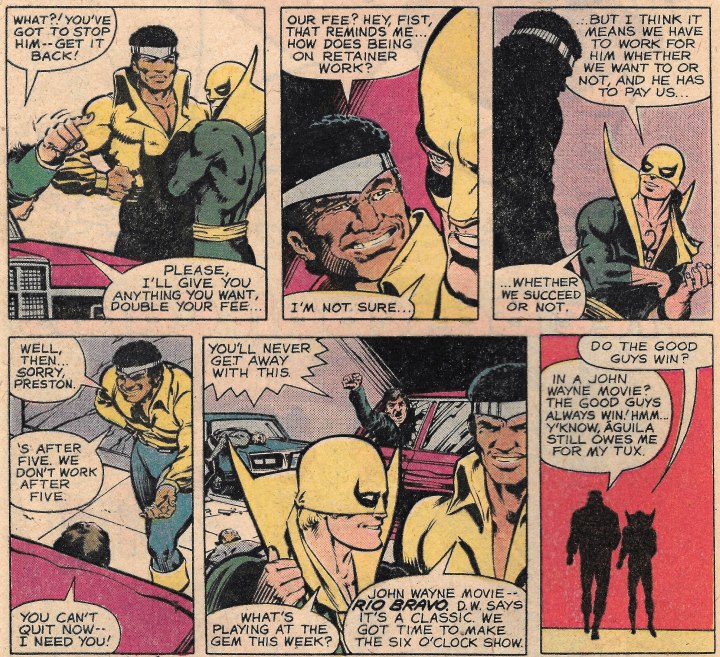 To sum up: I love El Aguila. And Power Man. And Iron Fist. These were some of my favorite re-reads as a kid, thanks much to Duffy's crisp writing and to the high art standards on the book. Great characters, great fun…See why I might be waiting for the Netflix now? OH, just heard Defenders will be out in August of this year…

*crosses fingers and ques up Netflix series*
Here goes nothing.

(For an in depth look into Iron Fist, be sure to check out Weekly Heroics podcast from the Two True Freaks network.)
Posted by SonOfCthulhu at 2:33 AM