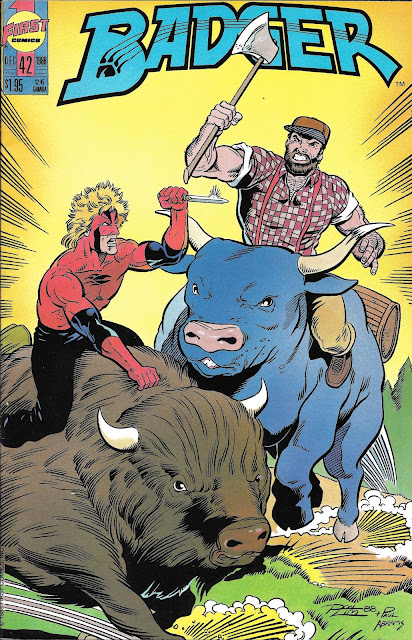 So silly, so entertaining, so satisfying

Mike Baron is another of those authors that I discovered by doing the Crapbox. And by discover, I mean realize I've been reading for years but just not really paying attention. There are points in your comic buying years where you pick up titles because you like the characters, become caught up in their adventures and then once satisfied, you put the issue away without seeing who made it possible.

Or you get caught up in the art and forget the contribution of the writer, even though the collaborative effort really is what makes the story so good.

Sadly I did this with Mike Baron for many years.

Which is a shame. He's a double Eisner-winner for his Nexus series (alongside Steve Rude) and I've enjoyed his revamps of Wally West/Flash and Punisher ongoing back in the late 80's. I should have given him more credit.

I still might be able to "share the love." Just hop over to his site, bloodyredbaron.net, and you can find a complete list of all the books he's worked on, plus any upcoming titles.

Why? Well, let me throw this issue of Badger at you as an example of how much fun Mike Baron can pack into a story.

First some background on Badger, Baron's crazy Deadpool style hero. Badger is Norbert Sykes, a Vietnam vet with a mental condition. He is an exceptionally trained martial artist who is walking the land acting as a self-styled crime fighter. Also he can talk to animals in a Dr. Doolittle type manner. When he isn't wandering the byways of America on the back of his bison, he shares the abode of Ham the Weather Wizard in a castle in Wisconsin.

Yes, Ham was a mental patient too. 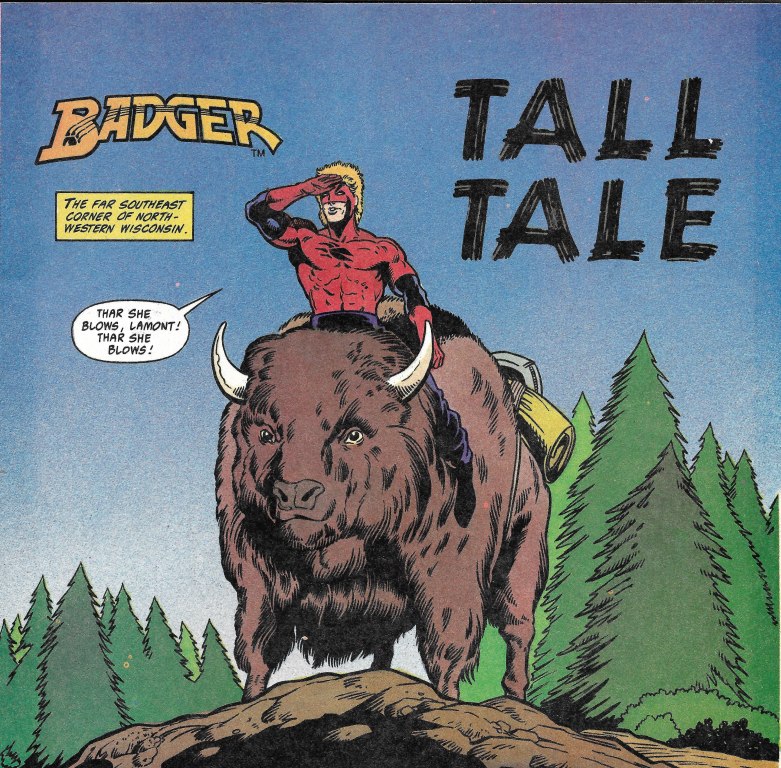 How does that opening grab you? To me, it sounds like a license for mayhem and craziness. I'm pretty much correct. This issue opens with Badger and his bison Lamont checking out a smoke column issuing from the forest near Ham's castle. 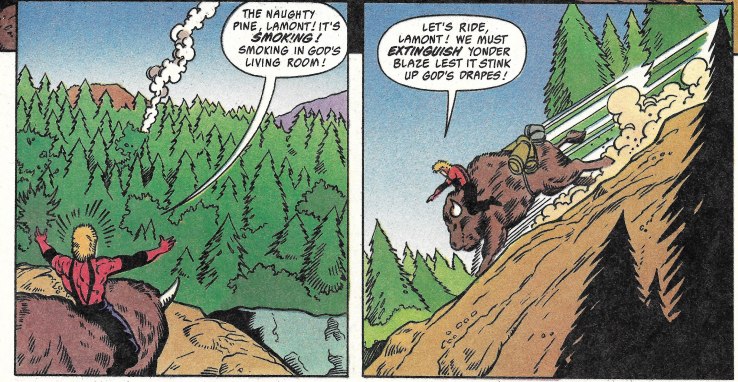 Badger has that "stream of consciousness" thing going. I have a feeling if you're a fan of Deadpool, this should fit right up your alley.

While putting out the fire, Badger comes across a pack of cigarettes and jumps through mental hoops like a Cirque Du Soleil performer to arrive at this being accidental and careless smoking as the cause. Smokey the Bear should have a word with that young smoker. 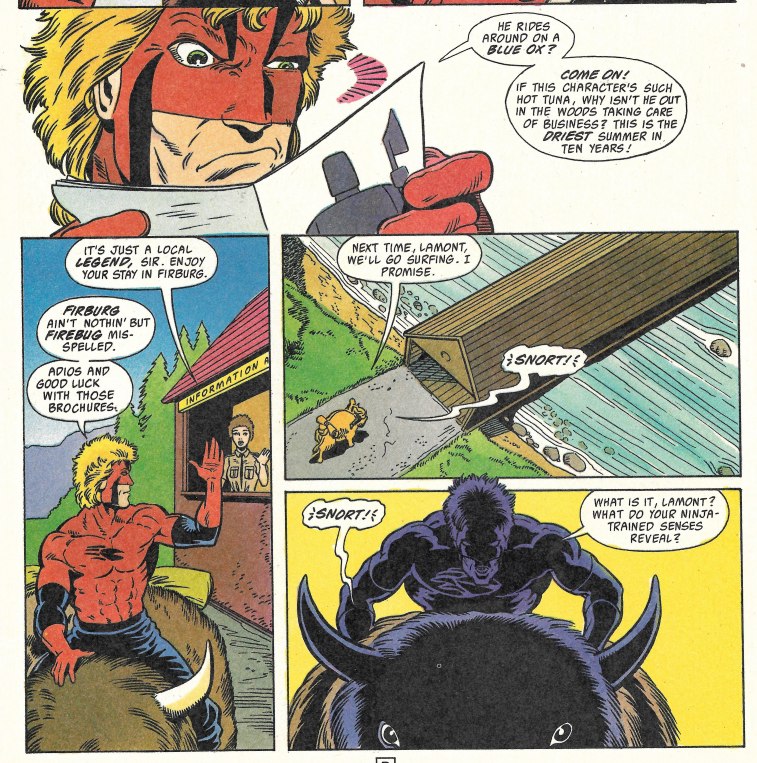 Badger instead chooses to continue his journey, whereupon he happens by a tollbooth operated by the parks department. They inform him of a local legend that Badger doesn't think is all that. Some guy by the name of Paul Bunyan.

And upon entering the wooden bridge who should Badger meet? 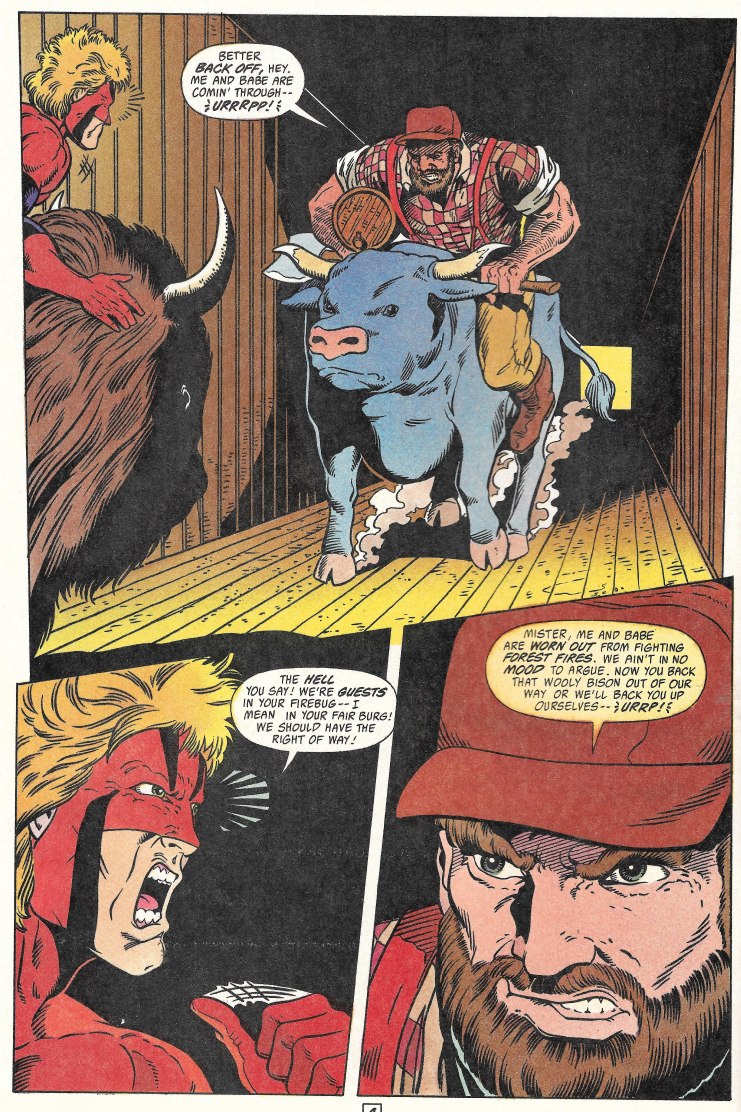 Yup. And it looks like both of them are ready to throw down. Sad that everybody can't just be friends. But after they exchange a few choice words, this ensues… 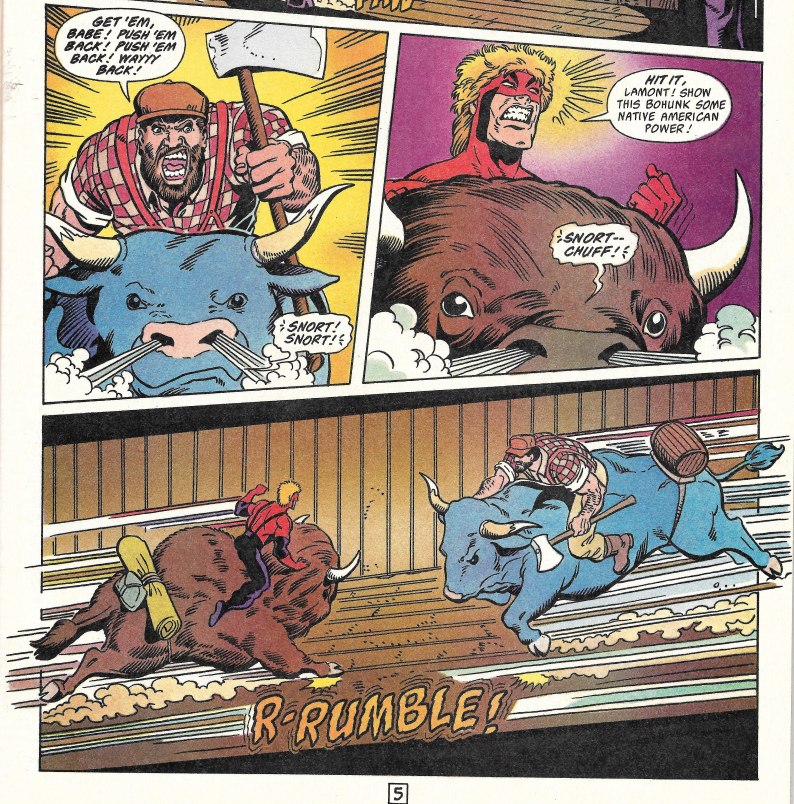 …which leads to some breakage of things… 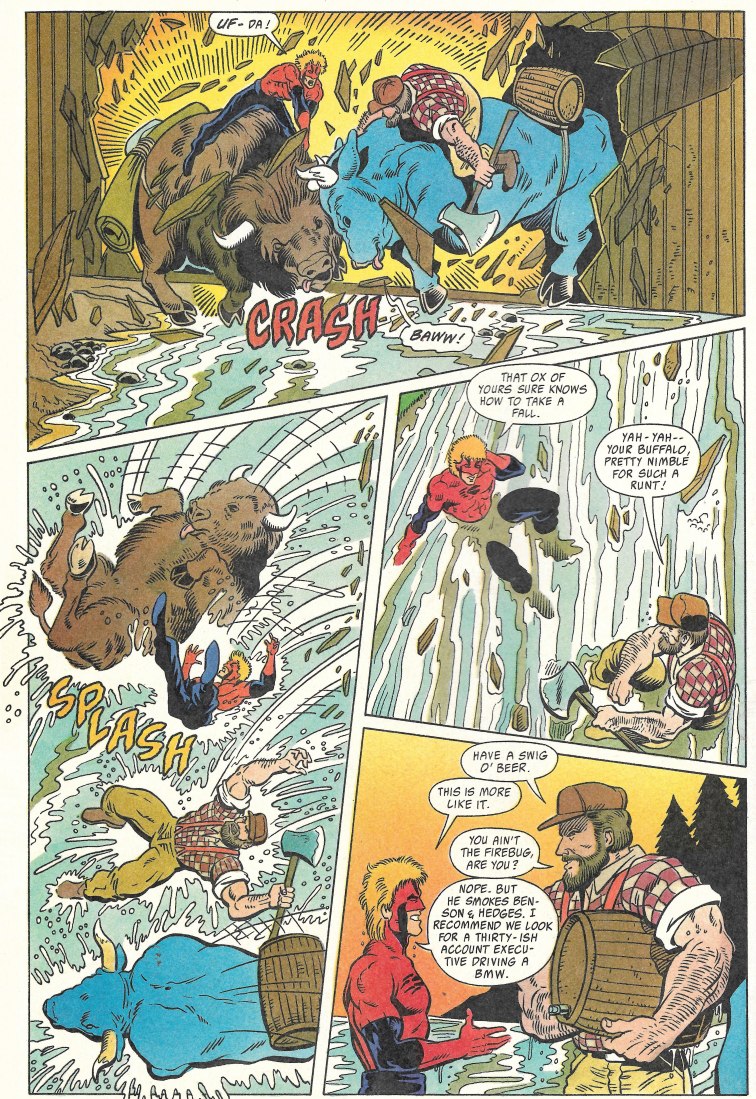 …and both of our weary, freaky firefighters taking a dunk in the drink with their prospective mounts.

However ,their disagreements soon disappear as they bond over their mutual hatred of the person setting the fires. After sharing some of Paul's barrel full of beer, Badger and Lamont take off toward town. 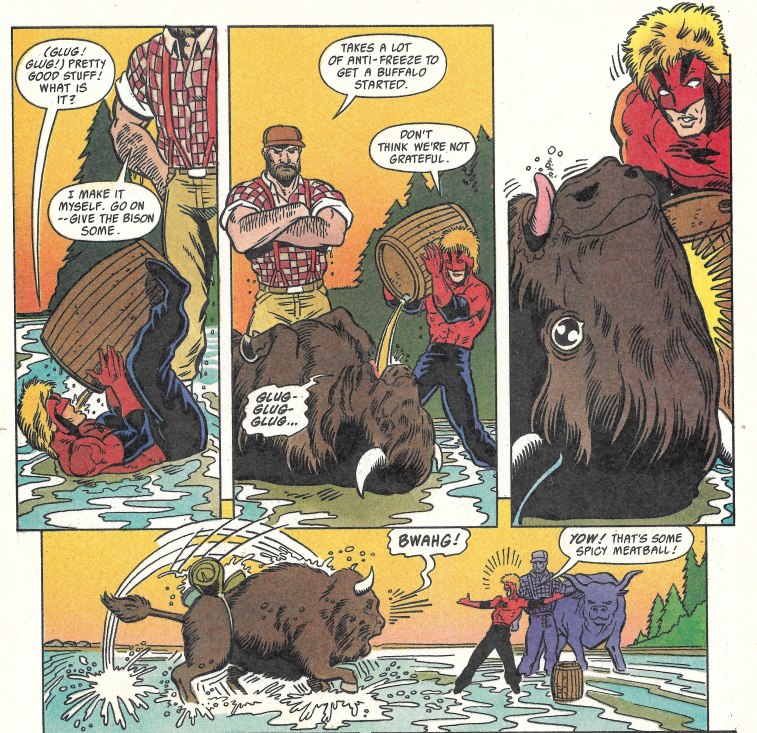 Note the odd, jokesy kind of way Badger talks. The most popular off-beat character of the time was The Mask, and while I don't think either character is based off the other, I do believe there was a common "vibe" that there was a correct way to do "wacky superhero" that both writers were channeling. It was the 80's, 'nuff said.

Badger makes it to town and parks his bison at the nearest bar. Once inside we have some silliness and then what would come off these days as a very un-PC way of insulting someone. That is, if being homosexual was deemed as being a put down at all, which in the 2010's it isn't. 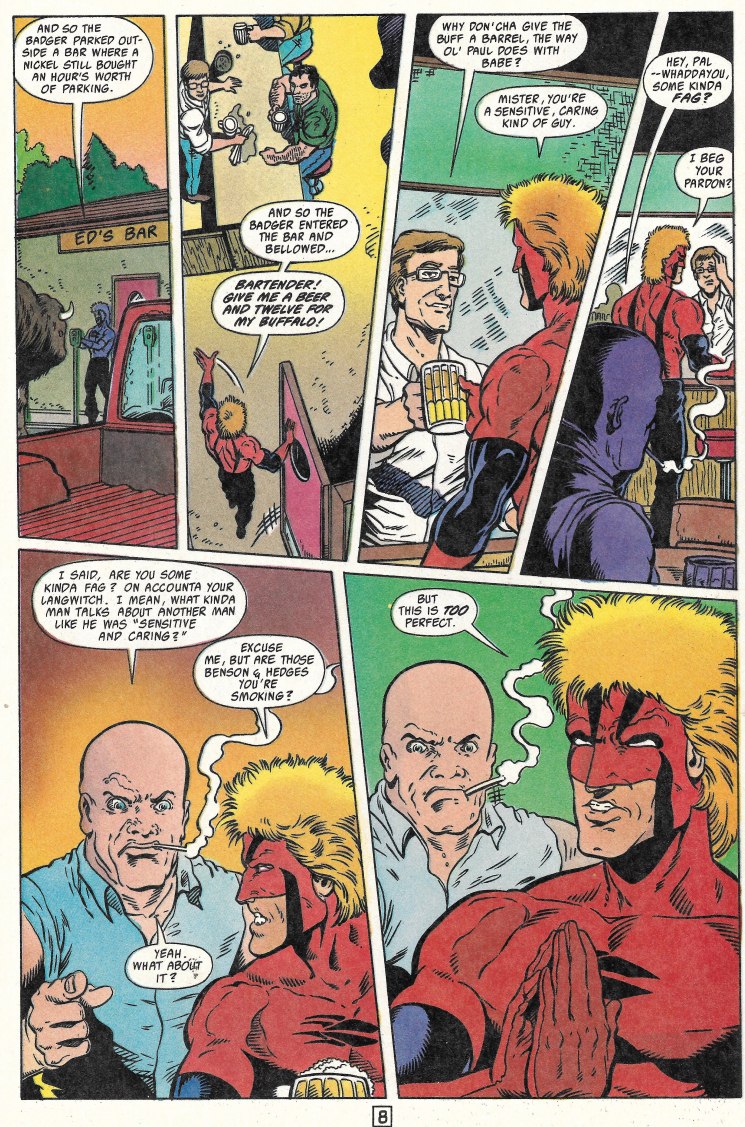 The implied sexual slur due to the word choice is unforgivable, however. 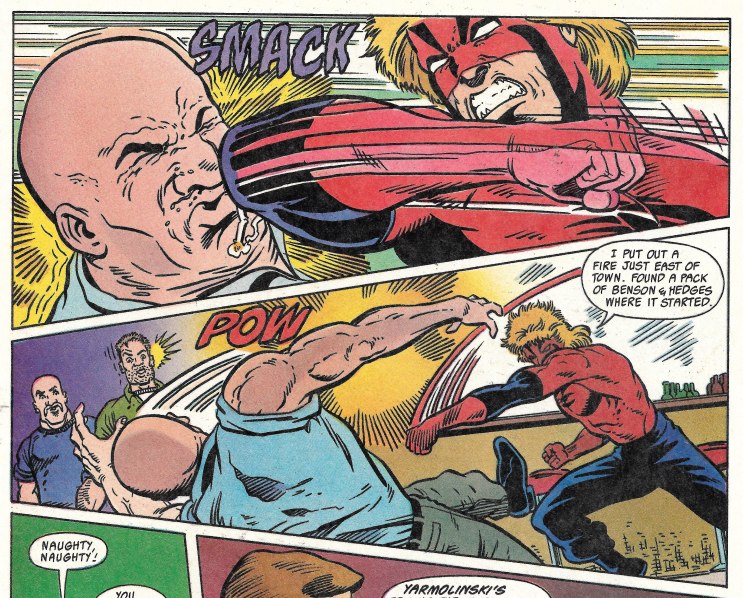 Badger makes short work of "Homophobic Mr. Clean" here and then gets word that this COULDN'T be the firebug as he is the guy who founded the town and hates going into the forest. Badger makes a call to Ham only find he is still unreachable.

Given the chrome-dome's standing in the community, Badger is forced to leave the city limits by the sheriff, so he heads back to Bunyan's woods for a nap, only to again cross paths with the once 100 foot tall woodsman. They get to jawing on why he's lost so much height and how Bunyan hopes for the glory days to come back. 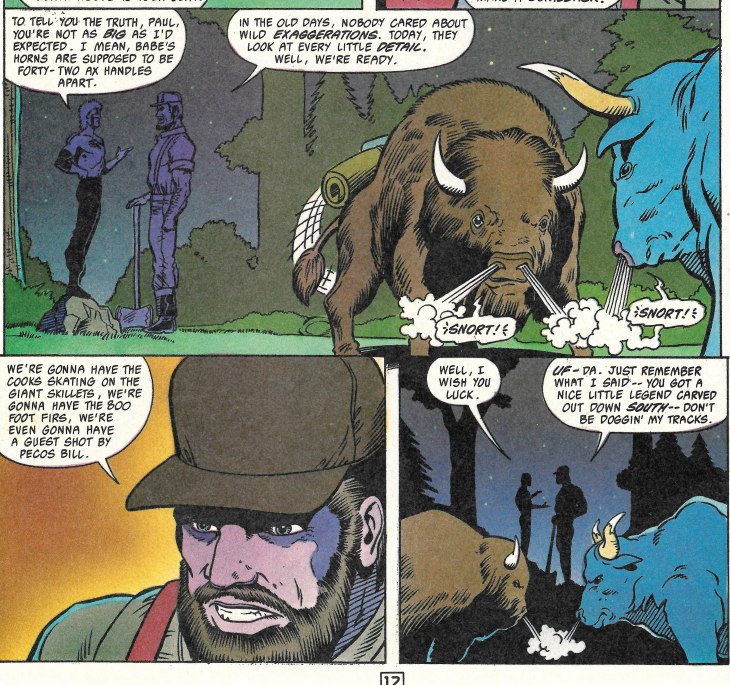 As the guys bed down for the night, our firebug makes his appearance again, his careless tossing of matches creating a whole new set of problems for our heroes. 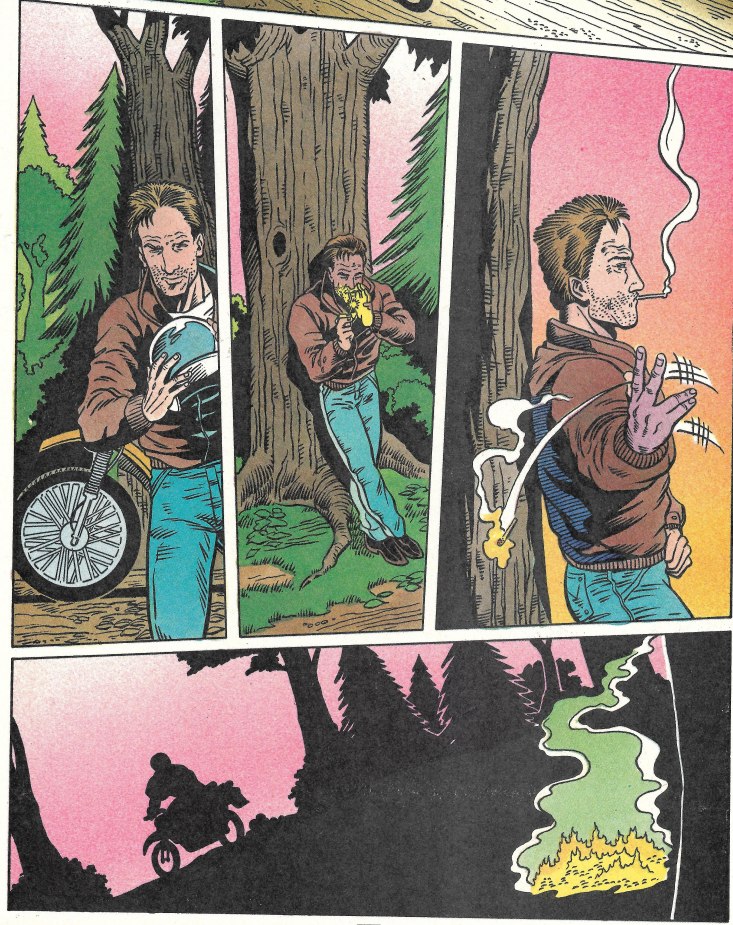 As morning comes, Badger gets word from a passing crow that something is up. He races to the top of the highest ridge only to find himself, Paul Bunyan and a host of animals (and the lady in the tollbooth) trapped by the forest fire. 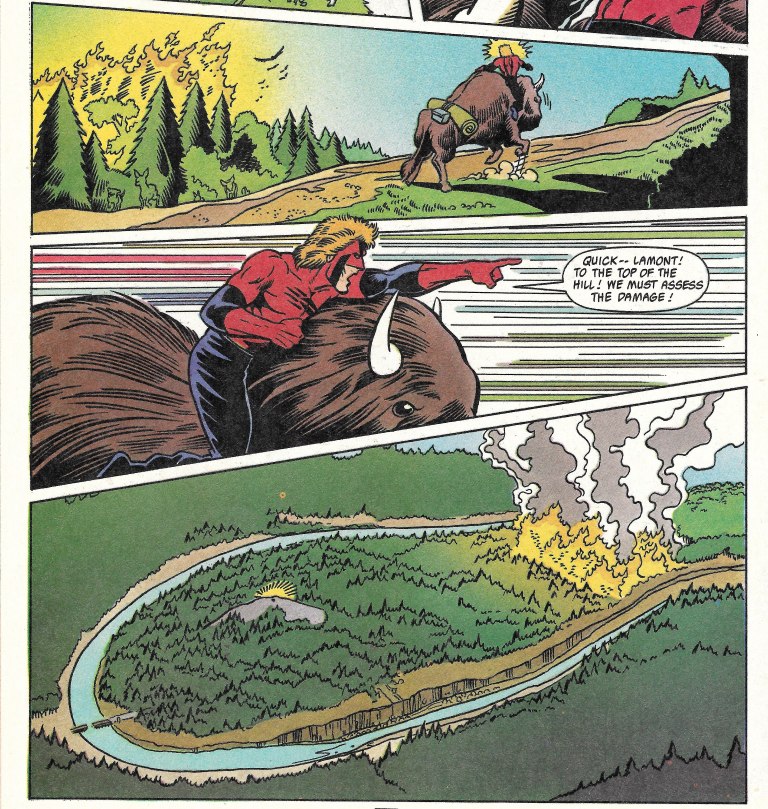 Badger makes off to find Paul, who has drunk himself to sleep on thoughts of the glory days. Waking him seems to take a bit of effort. 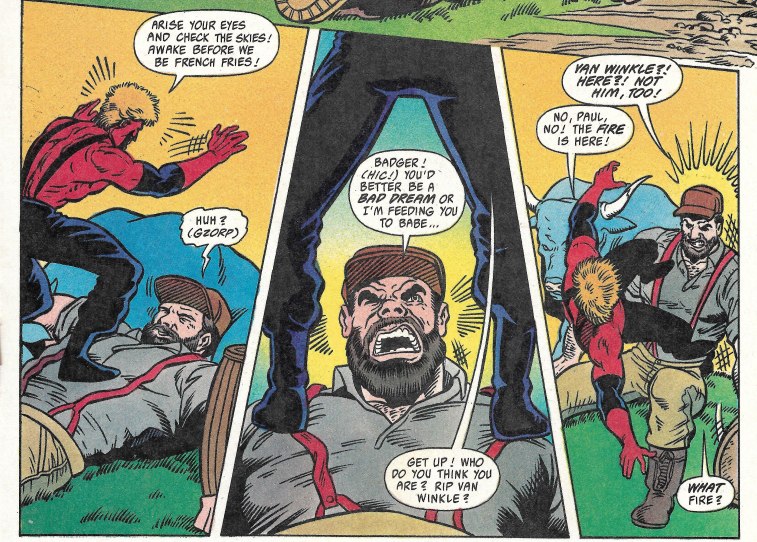 But in showing him the fire, we get Ron Lim doing a nice two-page spread. The art in this is really amazing and out of all the Badger books that have fallen my way, Lim's stuff sells the kooky adventurer the best. 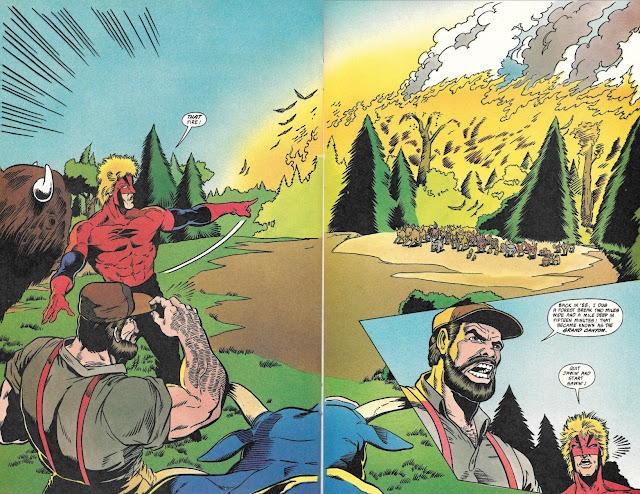 Anyhoo, a plan is hastily cobbled together and while Bunyan-Babe chop down tons of wood Badger instructs the beavers. 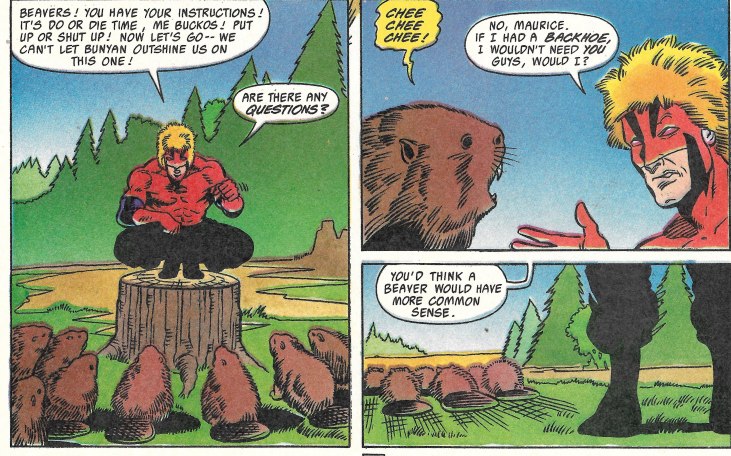 Within moments of comic panels, we have this giant bridge ready to deploy across the gap. Looks like a few animals have decided to bite it a bit early as we can see them lemming off the cliff there and their dead carcasses piled up below. 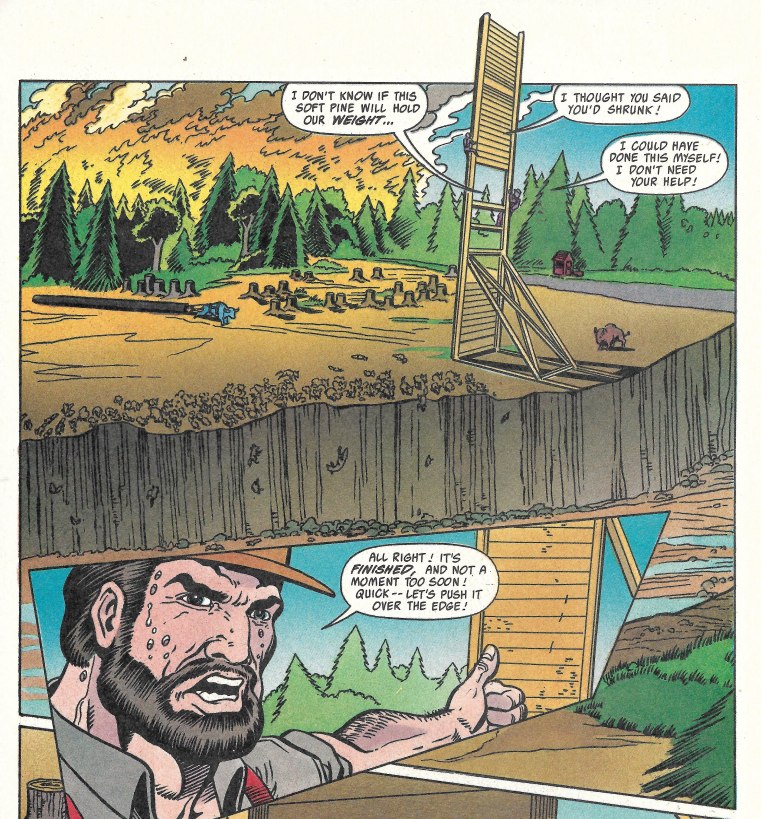 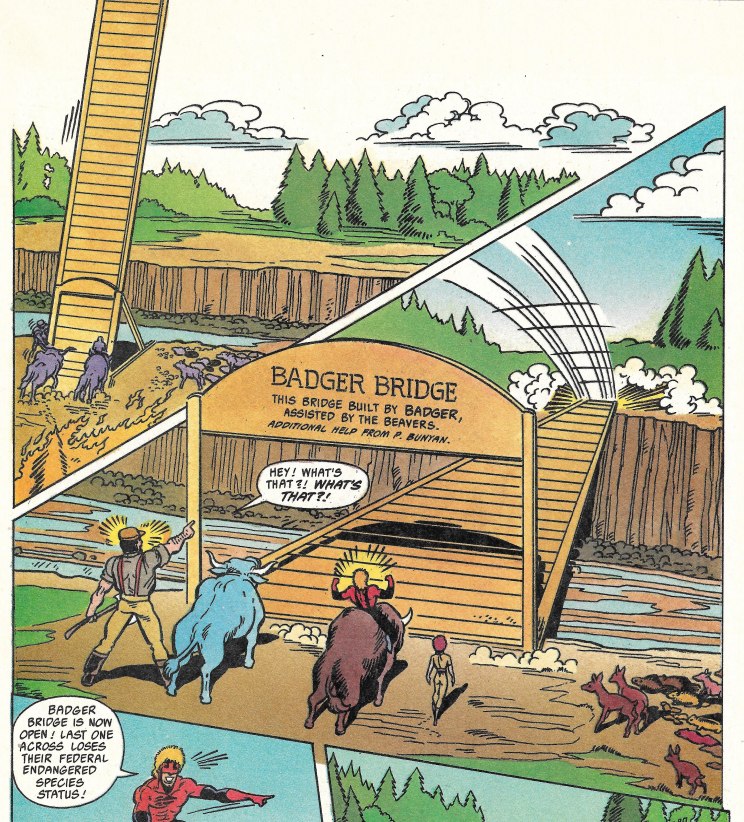 Once dropped though, Badger gives Paul a bit of the ole middle finger with this well-placed bit of signage.
Once all the hordes of animals cross (and possibly the toll booth attendant. The comic doesn't really show.) Paul and Badger have a bit of a disagreement over who should go across the bridge first. 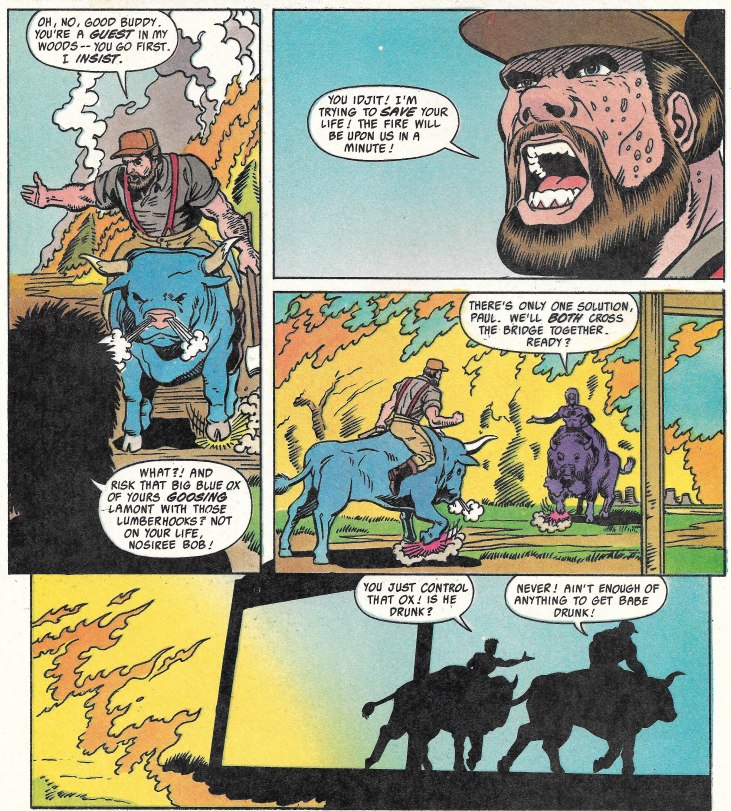 With that decided, you'd think the worst of it would be over. Not the case as the two still tussle a bit while crossing the bridge. Unfortunately this just points up the fact that these two and bridges are not a safe combination. 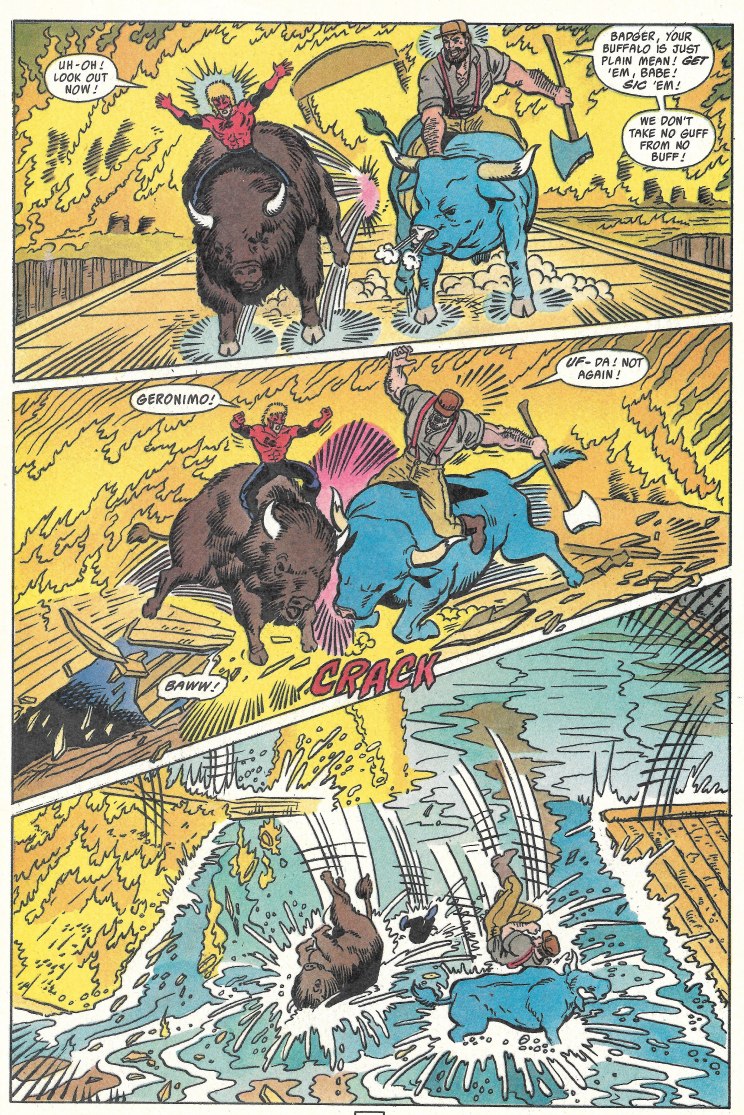 Luckily, Badger's weather manipulating buddy Ham comes through, ending the threat of burning to death by fire. However… 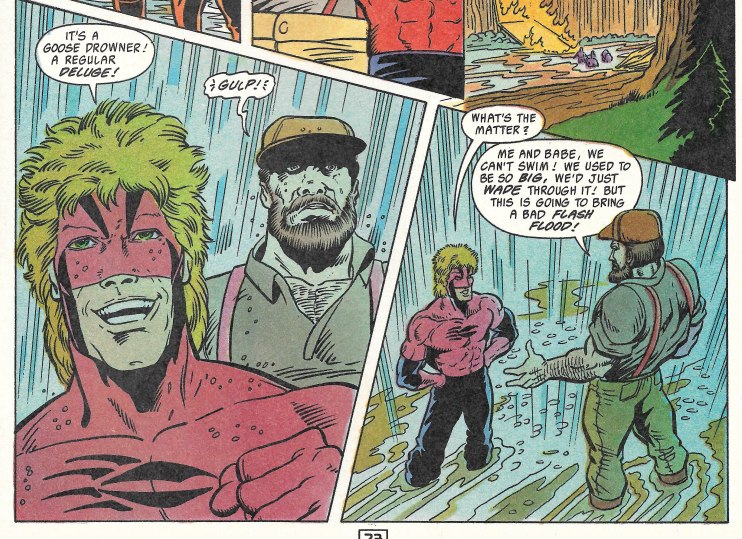 Badger comes up with a ludicrous idea and before you can say "hang hoofs," the foursome are off surfing the wild waves of Wisconsin. 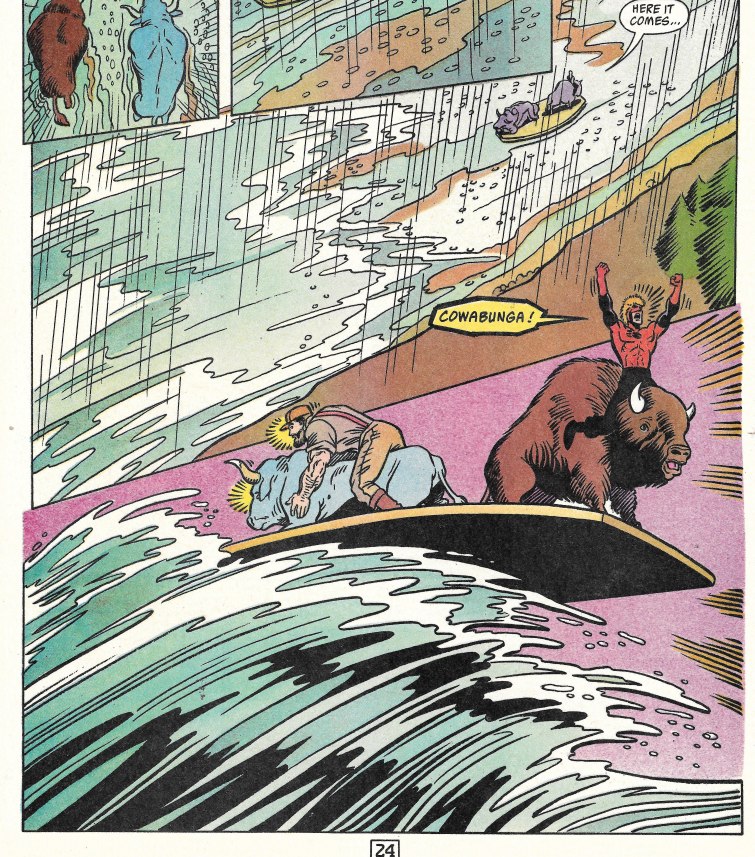 In an odd twist of fate (what hasn't been in this book), they happen upon a motorcyclist in need of rescue who turns out to be none other than the careless firebug they were looking for. 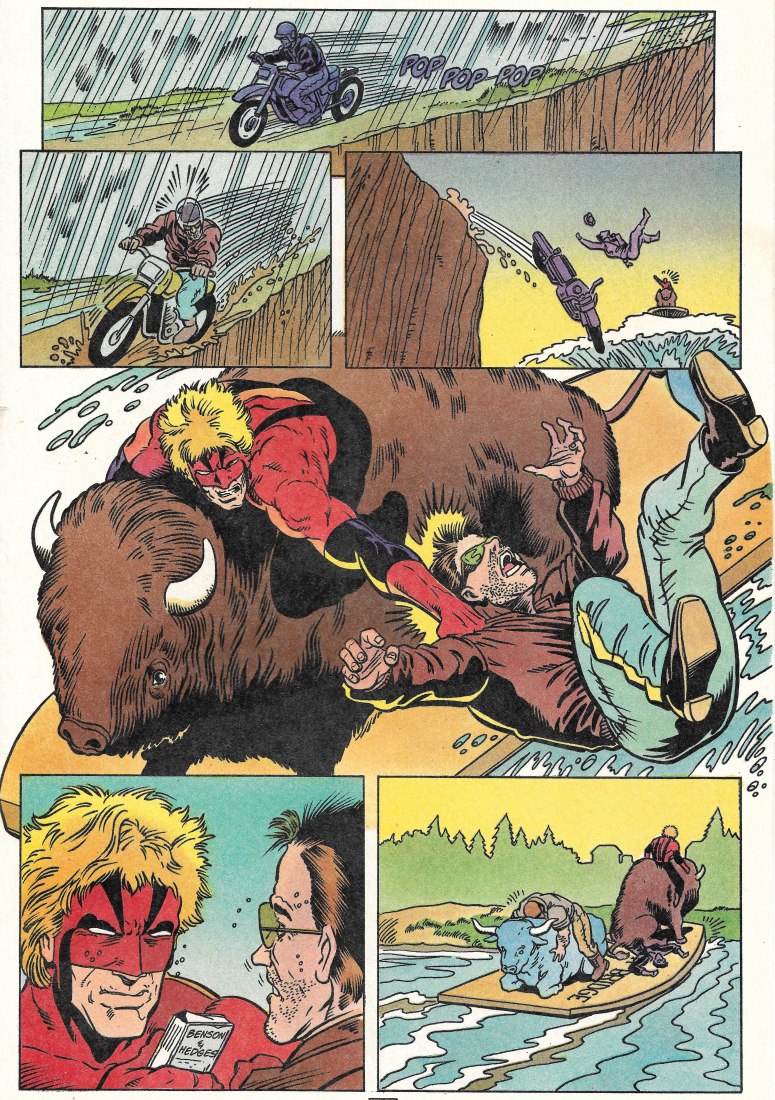 Love that Lamont is seen sitting on the fire-starter guy in that final panel.

Badger and Paul part ways. In the final page, Paul turns in the fire-starter, only to find out he is the son of the town founder. Paul even gets in the final joke. 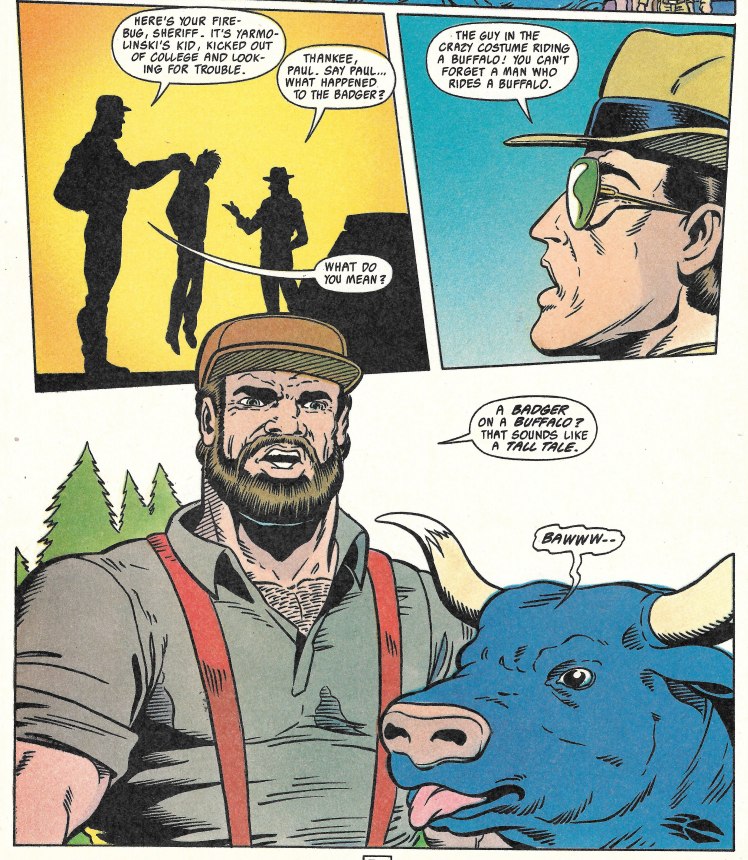 With that wrapping up this issue, I have to admit to a huge amount of admiration for the title. Maybe it was crazy at a time when crazy was okay in comics. I mean Mask, TMNT, Cerebus and many other titles weren't strictly serious titles. They took the best of the weird ideas and melded them into great entertainment.

I feel Badger does that too. Mixing tales of escaped circus rhinos, jump-rope dimension hopping, and the most odd-ball race across the Australian outback you've ever seen, a typical Badger issue was entertaining. In these days of striving for more realistic takes on everything, we might do well to look back at what Badger accomplished and why it was so enjoyable. Perhaps imbuing some of our current stories with that same energy and wit is what will really give the industry the shot in the arm it needs to survive.
Posted by SonOfCthulhu at 3:26 AM