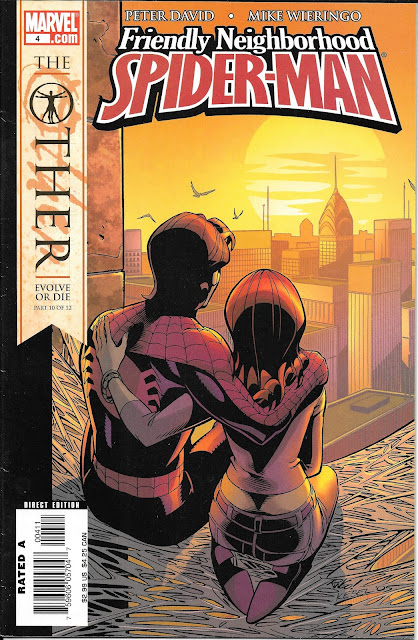 Everyone knows Spider-Man's origin. He was bitten by a radioactive spider and gained a host of the spider's abilities. It is one of the very first Marvel comics minted and since that time very little has been done to revise it. The story is pretty much perfect the way it is. Scratch that – it IS perfect. It is an iconic origin story.

At the early end of 2001, one of the writers of the Spider books decided it needed updating.

J. Michael Straczynski, oh he of Babylon-5 fame and writer at the time of Amazing Spider-Man, started the ball rolling by setting up this idea that there was more than one person in the world with spider-powers. Each of these people were "spider-totems," people imbued with magical connections to a primal spider god or spirit or something. Peter was the pinnacle of the spider-totems.

And that the accident that gave him his spider powers was no accident at all. He was chosen. Chosen to be a "spider-totem". It was what I would term a "midi-chlorian moment" for the series, with all the eye-rolling, shark jumpage that such an inauspicious event would create. 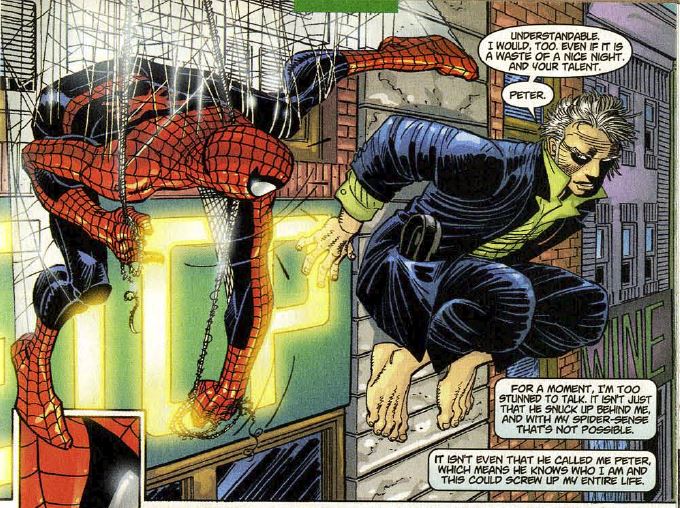 Peter learned this information from Ezekiel, a rich, elderly businessman also possessing spider-powers and with complete knowledge of Parker's secret identity. The spider-totem plotline meandered in and out of Straczynski's run on the book and there were some good moments with Ezekiel. 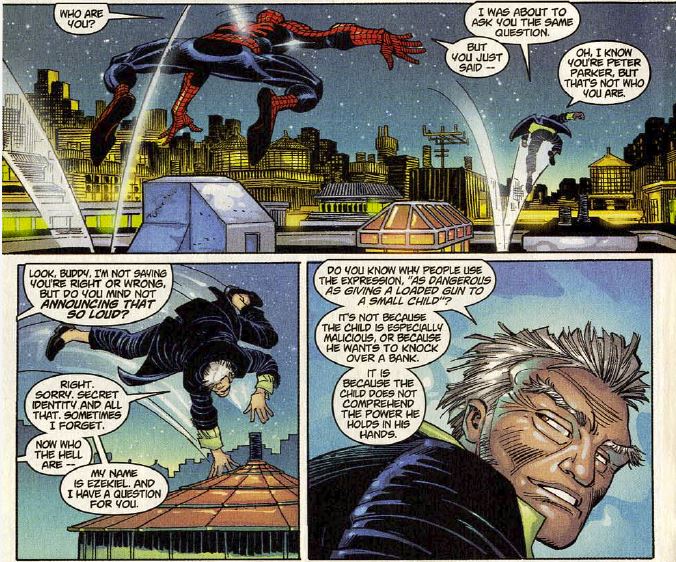 However good Straczynski is at creating great characters and dialogue, messing with a perfect origin is sure to have some blowback. It didn't help matters that he was such a big name that no one wanted to put the brakes on this plotline. Fans took up sides and did what they always do – argued. Up until months ago, the spider-totem thing had been shoved into the equivalent of the bottom drawer of your desk where old post-it notes go to die. Then suddenly the spider-totem idea spawned this entire multi-spider-verse storyline and about a bazillion Spider-men (and women). And as cool as that idea might sound and look, I still hate the spider-totem idea.

I detest anything that jacks with the origin of Spider-Man that much.

Call me an old man or whatever but I just don't like it. And I clearly don't like the changes it made to Peter Parker. Most of which didn't stick beyond this 12-issue-crossover-storyline.

There was one thing that came out of this no writer during or afterwards thought was a good idea. At least, if you take into account how quickly they shied away from using it after "The Other" storyline wrapped up.

They gave Spider-Man, the loveable quipster with a code-versus-killing, a pair of lethal, retractable wrist-spikes.

They made him into "Spider-Wolverine."

A mistake so big that it was only used in this run and then abandoned.

Of course I don't have enough of those intervening issues to prove any of that, so I sought help from two certain-someones who definitely would.

In a first, I'd like to welcome two very special guest stars to the Crapbox: Mark Ginocchio of Chasing Amazing and Dan Gvozden of Superior Spider-Talk. Between these two men is an amassed spider-knowledge so vast that it raised the hackles of my arachnophobia worse than a whole spinner rack of Sectaurs comics.

From them, I was able to ascertain that these stingers were temporary. Very temporary.

The stingers came about as part of “The Other” storyline and were pretty much forgotten immediately after the reboot with Brand New Day, along with his other powers. The writers and editors of the Brand New Day era always asserted that the stingers and other powers weren’t gone but would resurface at a later time. Readers knew better and the powers have never resurfaced ever since. That said, for some reason Kaine seems to have at least retained the stinger powers despite being a clone of the original Peter Parker and not the reborn “other” Peter that was born at the end of "The Other.”

The way it was retconned was essentially that Kaine either retained them from his transformation into a Tarantula after the “Grim Hunt” story and/or that “The Other” was attracted to Kaine’s violent nature and saw him as a more viable candidate as a host than Peter. This story played out in the pages of Scarlet Spider, a short-lived but fan-beloved (well, for some) series from a couple years ago. In some ways, a large part of that series was spent clarifying the results of “The Other” and trying to make sense of what happened to those powers, characters, and parts of canon in the wake of Brand New Day.
So after The Other, the combined creative staffs of all the spider-books walked away from Parker ever using this violent and totally-against-character superpower again.

But the honest question is how bad is this particular issue of The Other? That is far more problematic. If we define it by the long term character building aspects, it sucks in all ways that something flying in the face of so much history can. There is nothing that twerks my inner-fanboy off than flipping the bird on the really GREAT pieces of comic book history for a cheap toss-off story or retcon that isn't near as clever as it thinks it is.

On the other hand, this is Peter David writing and he's at the top of his game with this one. Tony Stark (Iron Man) is involved and is his witty, charming self in this, and we all know I'm a huge nut for all things Iron Man. Peter is written with that clear sense of fun and energy that we all know and love. Aunt May and MJ have cameos both in character and appropriate.

But the parts are better than the whole and it is quite easy to see why at least a few Spidey-fans gave Straczynski, David and Reginald Hudlin a wide margin to adapt the spider mythos. Want to see what I mean? 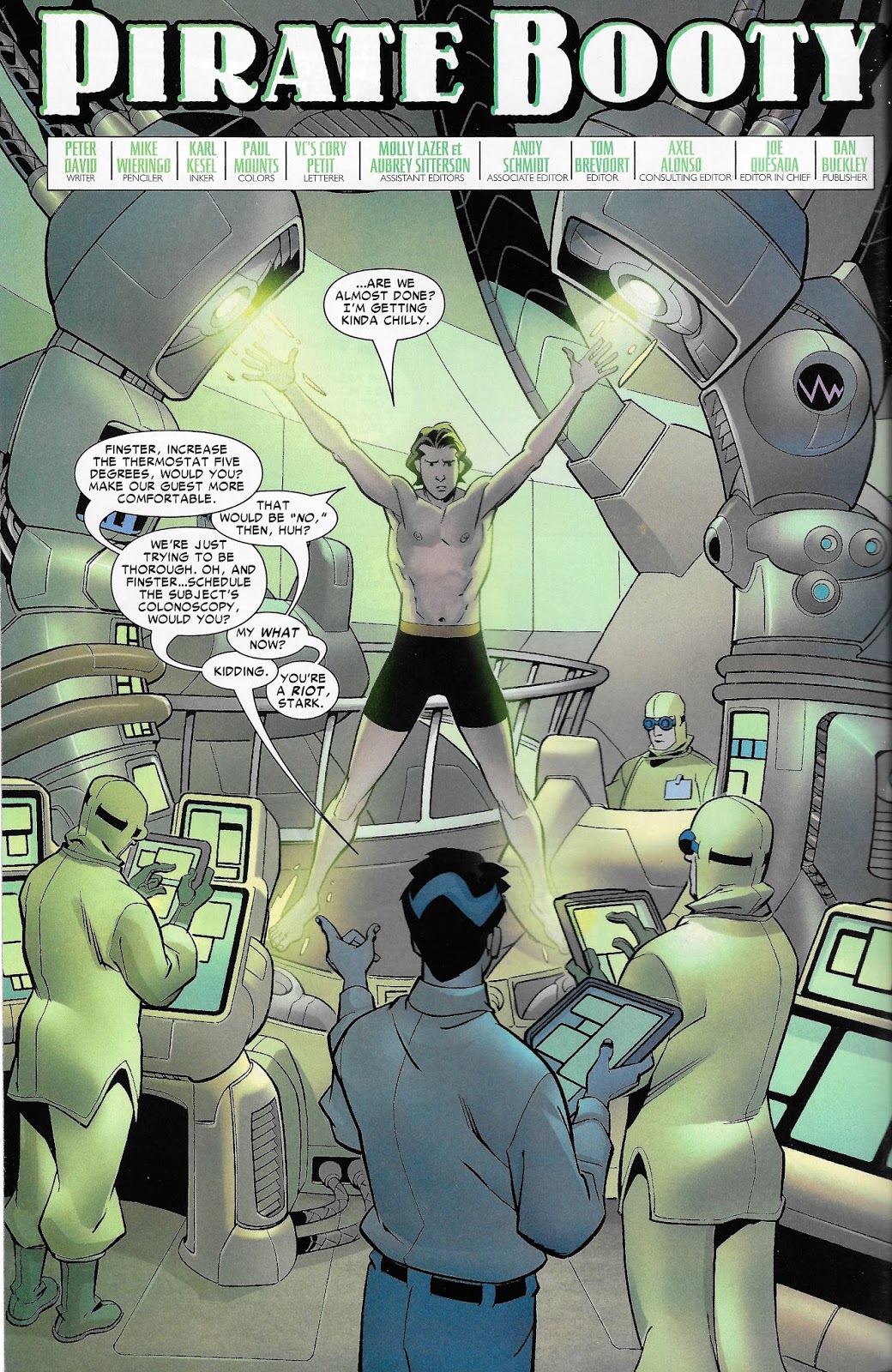 Take how our story opens, with Peter undergoing a full physical because in the preceding issues he apparently died. He came back though, after first discarding his dead body like a chrysalis and then building a cocoon under the Brooklyn Bridge. Peter emerged from it unhurt, which is saying something since in the battle he lost a frick'n EYE, but everyone is a bit skeptical of him and his powers.

David can work wonders with these simple interactions. It is great to see the chemistry that developed between Peter and Tony during the New Avengers period. It is a shame that, instead of allowing the comradery to continue on for a decade of great stories, we were instead subjected to the nonsense of Civil War and subsequent decline. 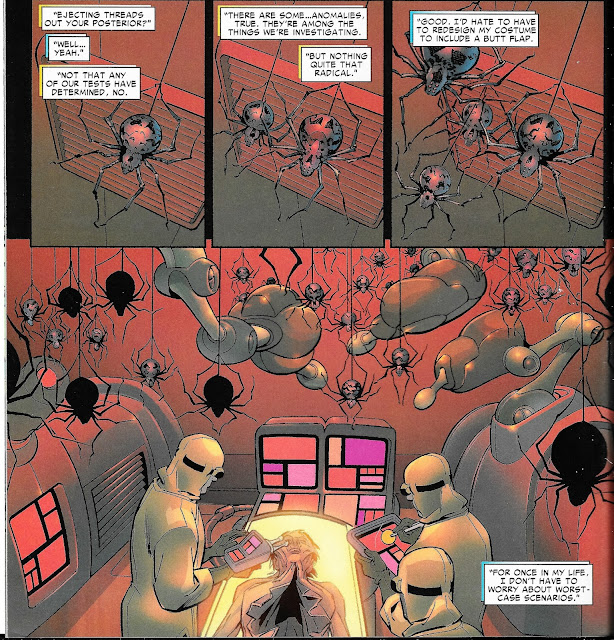 While some interesting interplay continues between Peter, Tony, Reed Richards and Hank Pym, we check in on his body to find that the scientists studying it should seriously think about calling the Orkin man. All these critters will play into the issue in just a few, but for now David sets up a Flash Thompson sub-plot and then dives back in to Peter's return with this neat bit of interplay from MJ, Logan and Jarvis. 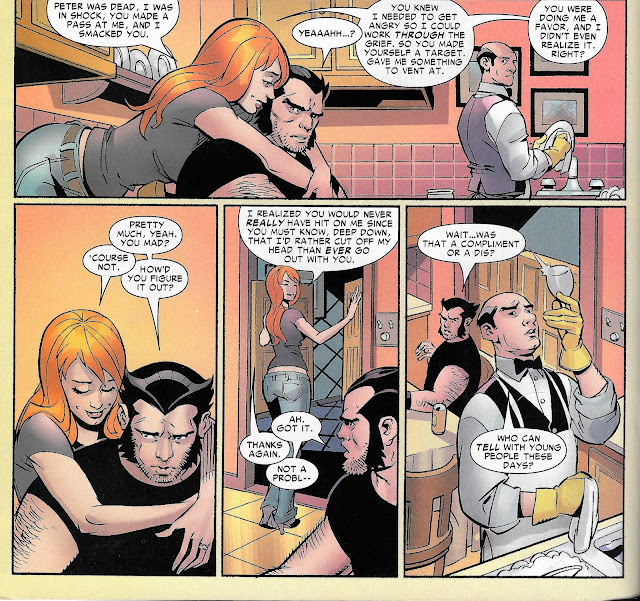 Understanding characters and motivation. Deft touches of emotion and humor. Is it any wonder why I love Peter David's writing so much? 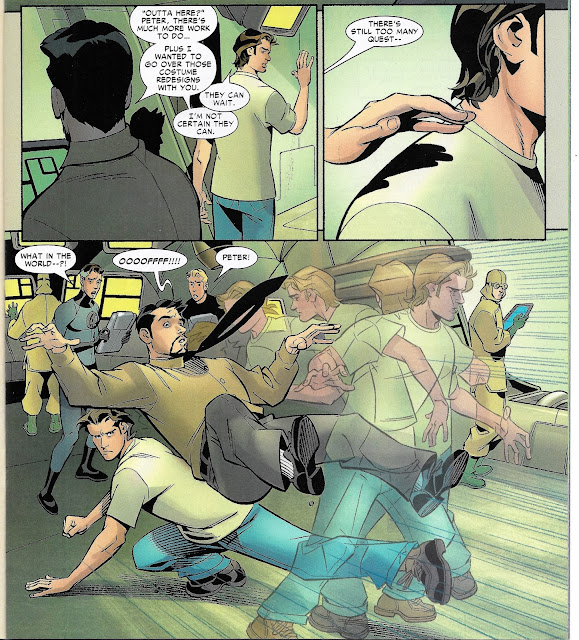 Meanwhile, Peter's spider-sense is now turned up to eleven and directly wired into his reflexes, one of the changes that I might have been okay with. It is in keeping with the character and more of just an enhancement of existing powers. I could deal with The Other if it was just this and no wrist spikes or messing with the roots of his origin or whatever.
Especially when we get neat moments with Aunt May owning Reed, Hank and Tony, like we do here. "We're sorry, Mrs. Cleaver." And as Peter and MJ go out for a night swinging around, Peter's body is consumed fully by spiders who have nicely webbed up the science team examining it. 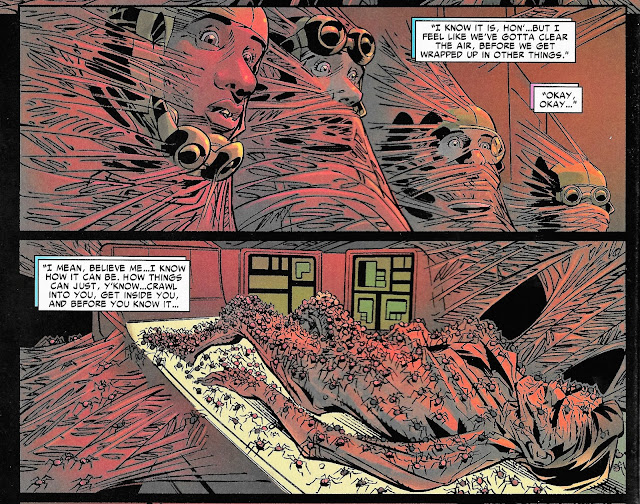 So far things are progressing nicely. We have the build up to a mysterious villain, ominous goings on, and some inventive dialogue. Everything is humming right along, when all of a sudden Spidey feels a trembling in the spider-force. 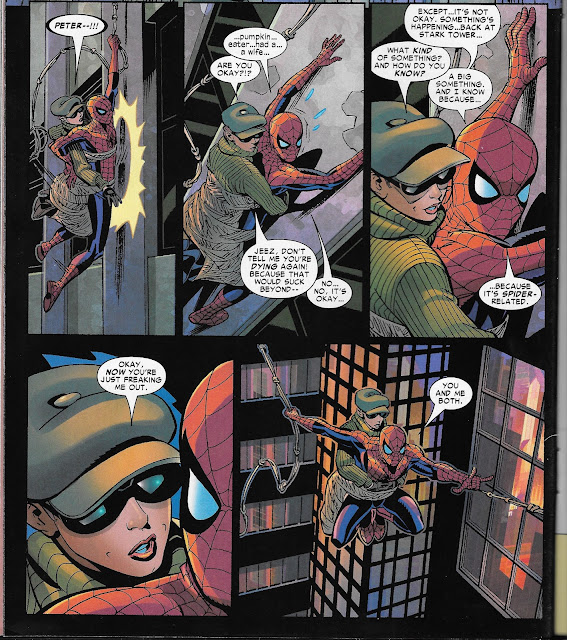 Yes, he now has a literal "spider sense" in that he can sense something is wrong with actual spiders. I don't want to know more. I assume this means you slap one with a shoe or a rolled up newspaper and Peter Parker will know about it.

He arrives just in time to get in a scuffle with this vaguely humanoid pile of spiders and that's when it happens. The second appearance of the "spider-stingers." 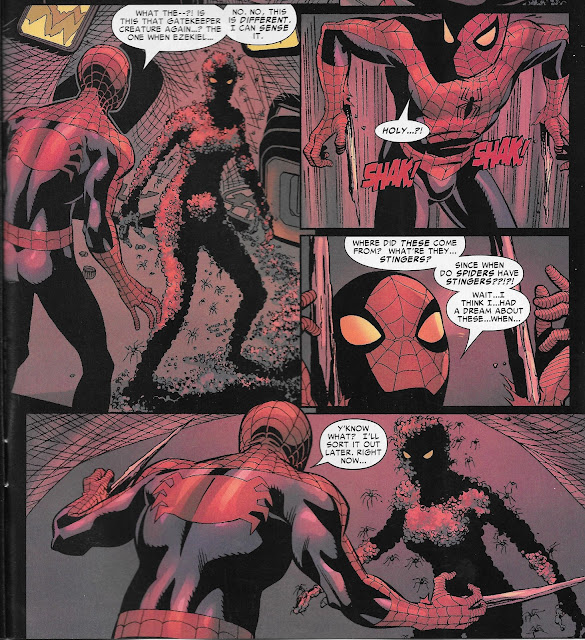 Now I'm not one to ask for scientific accuracy in my comic books. I mean we've all seen what would happen if we asked for that in a Spider-Man comic (NSFW). But these stingers bug me.

I mean, spiders don't have stingers. That's wasps, bees and hornets the writers are thinking of. Spiders have fangs and venom glands. But I suppose if he had grown fangs and sucked all the energy from Morlun it would have turned readers off the character. He would be like a vampire Spider-Man or something. Still…there is no reason to give him retractable arm spikes unless you want him to be "Wolverine with webshooters."

The human-shaped mound of arachnids ends up escaping and we are left with no answers to any of this mess in this particular issue.

An entire story arc over five years and the culmination of which is so despised that it is rejected by the very fan base it was created to awe. I haven't seen something like this happen since the Star Wars prequels.

Anyway, this change DID occur. Marvel doesn't like to admit it and quite frankly have shifted these to another character, but I hold in my hand the proof. Proof that even good writing and an enjoyable issue can still be filled with a major misguided change to an established hero.

For a GREAT but totally different take on this, check out Dan Gvozden's piece on The Other HERE!
Posted by SonOfCthulhu at 6:18 PM