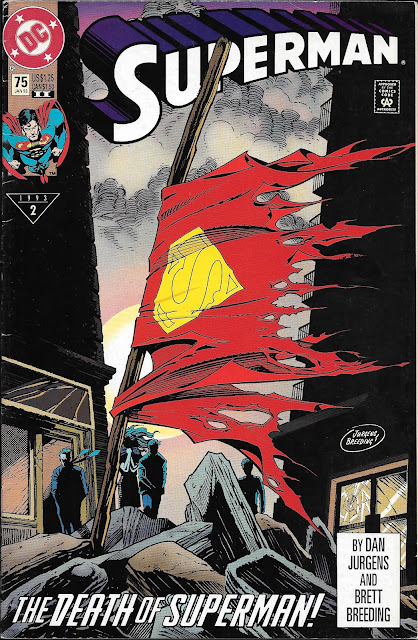 The one that started it all

I've mentioned once before how much hatred I have for the concept of killing popular heroes only to bring them back a year or more later. I feel it panders to the sensationalist elements that lurk within and without the comic book fandom community. It generates whirlwind press and gives books a very temporary sales bump that most are unable to retain any readers from.

And they do this at the expense of good storytelling.

According to several sources, the death of Superman arc was conceived because the wedding idea the writers had come up with couldn't be implemented due to the TV show Lois & Clark doing the same thing. So the running gag in story meetings was "let's just kill 'im," something longtime Adventures of Superman penciler and scribe Jerry Ordway joked about. The idea took a bit of time to set in and then it unexpectedly gained traction. Dan Jurgens had already wanted to do a 22 page, single panel slugfest, but Mike Carlin wanted this to tie into a much bigger and better story.

So both ideas became one.

The death of Superman is one of the first and most successful of the kill 'em / bring 'em back arcs. So successful that it made everyone sit up and take notice that this ploy generated sales. Lots of sales. Sales that "we could make with our book if we killed someone off"-kind of sales. So for that reason, it gains a lot of ire from me.

That said, there are individual tales of heroes dying/returning that I do think transcend my anger over this trend in storytelling. The death of Superman is one of those tales. The actual story of Superman's fight with Doomsday and death is where this issue concludes. The parts that led to here were fair in my opinion. Each of the final four had a regimented structure: Adventures of Superman #497 had four panels per page, Action Comics #684 had three panels per page and Superman: The Man of Steel #19 had two panels per page.

This issue, done up like Mjolnir's Song - Walt Simonson's Thor vs the Midgard Serpent issue from The Mighty Thor #380, is all one panel per page action shots, attempting to give the man of steel an epic, heroic sendoff. Mostly it succeeds at that, however it is so predictable in its sequencing that I always find it a bit boring to read through. Add to that a few horrible pages of full page art and you end up with an unexciting issue.

So the actual death was kind of boring.

The books that came after redeemed it though.

DC had a plan with Superman's death and replacement. This was more than just a marketing-driven publicity stunt. It was that too, but the stories told after his death were worth telling. And worth reading.

First up was the much better "Funeral for a Friend" series, which dealt with the many forms of public and private grief while still having tales of new defenders (Supergirl, Gangbuster, Thorn and Team Luthor) rising to put down a new wave of crime arising in the wake of his passing. Enjoyable stuff.

The redemptive stroke came in the form of "Reign of the Supermen" where four heroes arose in the place of Superman, all bearing his emblem and utilizing some portion of his power set. Superboy, Steel, Cyborg Superman and the Kryptonian Superman, three of whom set out to prove they were THE Superman, returned from the grave. The ending of this arc was to be the most satisfying return of any hero death I've read.

What I'm saying here is there was a reason this series made money: it got the formula right. Have a good way to bring the guy back. Not magic or wishes or deals with the devil or Superboy Punches or anything crazy. Just good old fashioned solid plotting that takes into account the character in question.

I'll talk about the disbelief beast in just a bit, but first let's deal with this issue, shall we. Before I go any further, I need to state that I think Dan Jurgens and Brett Breeding are both fine artists. This book was a monumental effort that should have been told some other way. I'm certain that everyone was clamoring for them to do it like Simonson had done Thor, but let's be honest…Simonson is a one of a kind artist with some kind of sixth sense about design layout. Generating a 22 page book of one page pictures that tells a story and has the lead character on every single page (bar one) is quite an undertaking. They did the best they could.

But occasionally something slipped through. Like this title page. 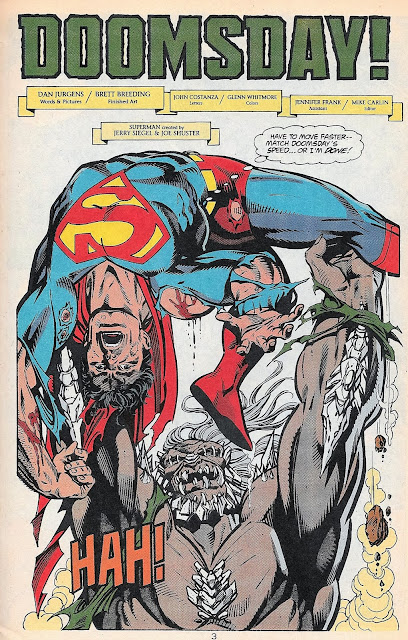 I find the body language from Superman impossible in some way, the bent leg in the back seems to suggest he is really bowed over in a "U" shape. It just doesn't work for me. 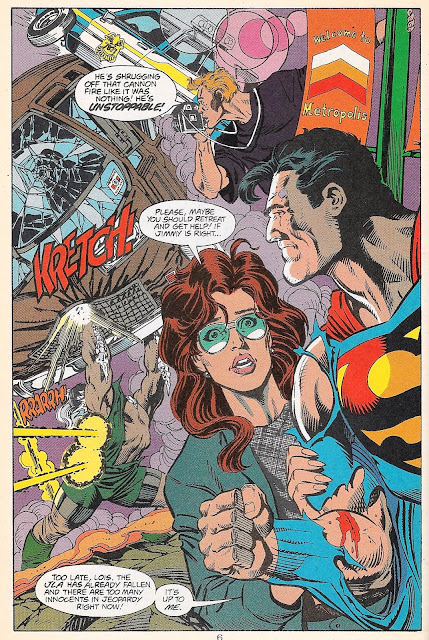 This panel kills me because it looks like Superman is just watching while Doomsday tears things up. He's not even flying anyone to safety. Maybe he is on a rest break? 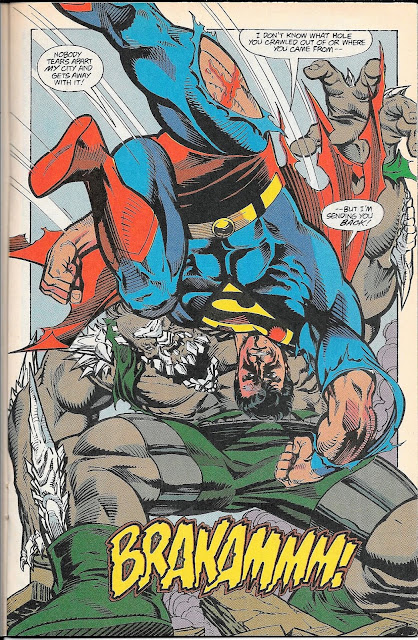 My most hated panel from the book. It's his neck. You don't turn your face away from the guy you are flying into. It leaves your back exposed. Such a bad panel. 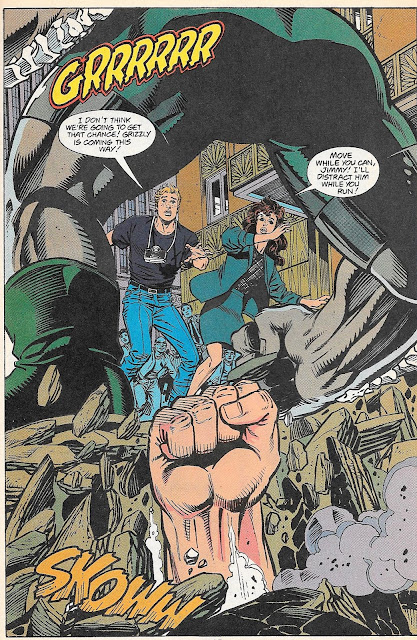 Superman is driven into the pavement and this is him digging his way back out….but it takes two seconds for my adolescent imagination to see Superman's fist and Doomsday's butt…put two and two together….and commence to giggling. "Super-Fisting". 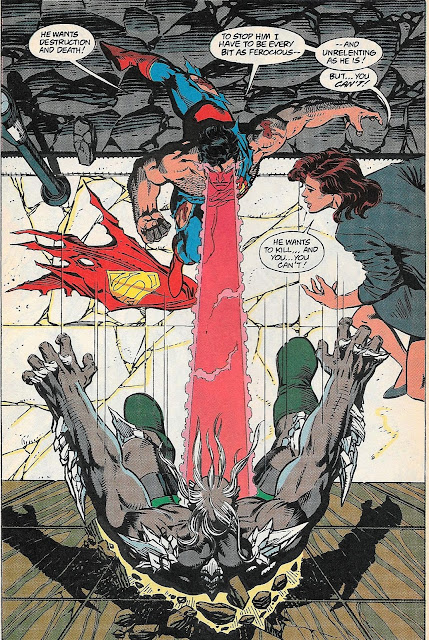 This is a close third in bad panels. Lois shouldn’t be in this at all and Supes's legs are extended in a very weird way. Lois looks like she is floating or standing on the wall Doomsday is impacting against. In reality, she is supposed to be getting up off the ground. 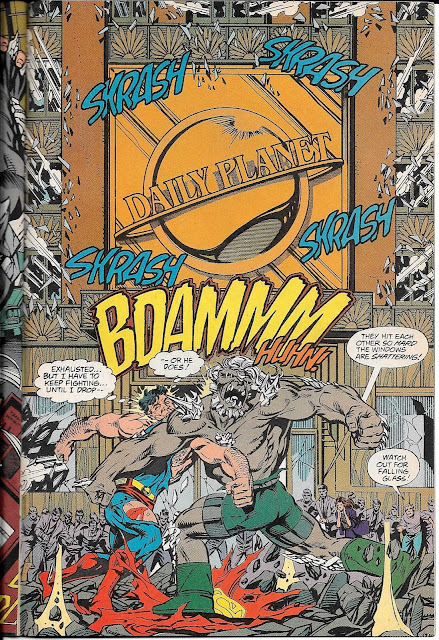 My second most hated panel. The action around the two figures is done really well, but the fact that every panel has to show both faces means that Superman just punched Doomsday in the armpit. And the arm placement is so goofy. Come on DC editorial, do they have to show both faces on EVERY page? I would have loved to see the back of Supes head in many of these. 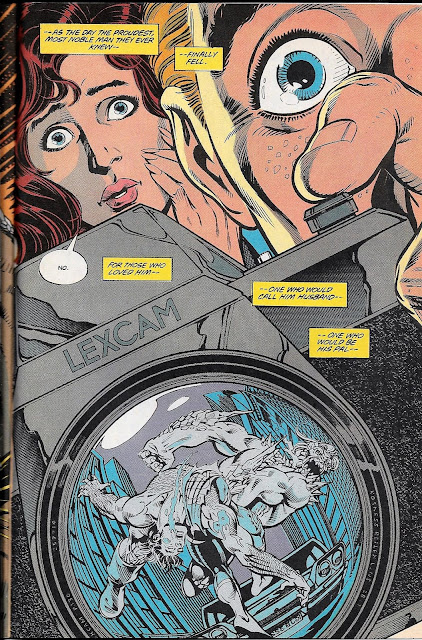 Last one on my list. This gets a mention because of an episode I saw on a TV sitcom that I can't remember. It had a couple getting married and their friend begging to do the pictures. They didn't want them to because the friend was a little strange and the wedding pictures would come out really bad looking. In the end they HAD to use the strange person, and the strange friend took pictures of them holding up silver platters and photographing their reflections in it. This is that kind of panel. Reaction shot or action shot, but not both. Let their faces show us what has happened. No need to try to do both simultaneously.

And that's it. From here the story gets better. Oh, and so does Superman.

One thing it did feed was the "disbelief beast." John Byrne was quoted as saying that after Jean Grey/Phoenix's death but before her resurrection he would be regularly approached at conventions by X-Men fans who did not believe she was really dead. They would pull out elaborate theories as to how one of their favorite founding members was actually still alive even when the guy who wrote the story confirmed that, no indeed, she was dead as a doornail. The death / return of Superman, occurring six years after Jean Grey's reappearance (surprise!) alive, was the alarm bell that showed just how much money could be made from making the alive/dead condition of a hero something controlled by a lightswitch.

And that confirmed what many fans thought: death in the comic book universe NEVER has any consequences. It is always just a temporary inconvenience.

And while technically Jean Grey was first, her death was never meant to be reversed. It was to be a permanent thing. Death and Return of Superman was a planned "event" and it showed that good planning amounted to big sales revenue.

I don't like what it created. I don't like adding to audience disbelief that these heroes can never die and don't face that ultimate jeopardy. In my head I know they don't ALREADY. I know they HAVE to come out okay at the end of each story arc. It just seems that giving them this ultimate get-out-of-jail card cheapens the effect of ANY character death and/or the impact in story terms of any sacrifices they do make.

Jean Grey
Bucky Barnes
Barry Allen
Hawkeye
Captain America
Hal Jordan
Batman
Ted Kord (what? Not yet? Fine, but we all know he'll be back soon)

And so many others. They can never truly die again and have the same impact for this generation. We've seen them face death and beat it. So what enemy can hold any dread for them?

A. Sherman Barros explores all of this in much better detail than I bring to it over at Crack! Pow! Wham! I URGE you to go give him a read.
Posted by SonOfCthulhu at 6:08 PM