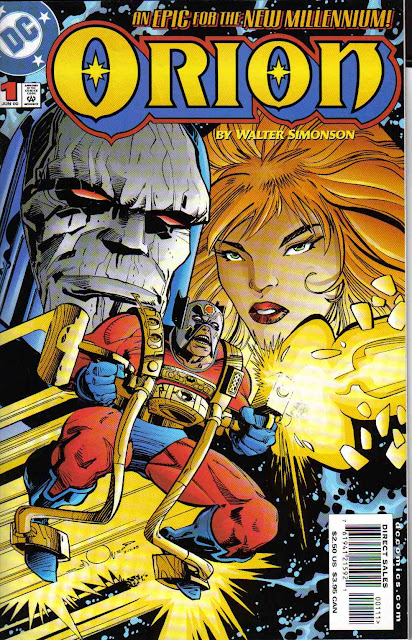 Another thunderous God gets “Simonized”

This was what drew me to those bundles of books in Half-Price that very first day. Walter Simonson was responsible for a tremendously enjoyable run on Marvel’s Thunder-god Thor in the middle 80’s. He took an approach with Thor that focused on the entire cast of characters and created a storyline that emphasized the Norse mythological grounding of the series. Simonson also drew the series in his amazing art-deco style.  Others have called his run epic and operatic. It was all that and it was a blast to read. As soon as I saw his name on the bundle with Orion, I knew that I had to pick it up.

Boy was I lucky! That pack had roughly 12 issues of Orion. For those of you who missed this series, it has been traded, but even Simonson admits there were some issues with how that came off. Worth the price to track them down, however because the issues are pure dynamite. Plus there are even bigger surprises in the backup stories that grace many of the issues, but I’ll save those for later. So how does Simonson handle this New God? The first issue runs a bit slow, but is excellent storytelling. Simonson shows us a town on Earth where the population is acting very strange. 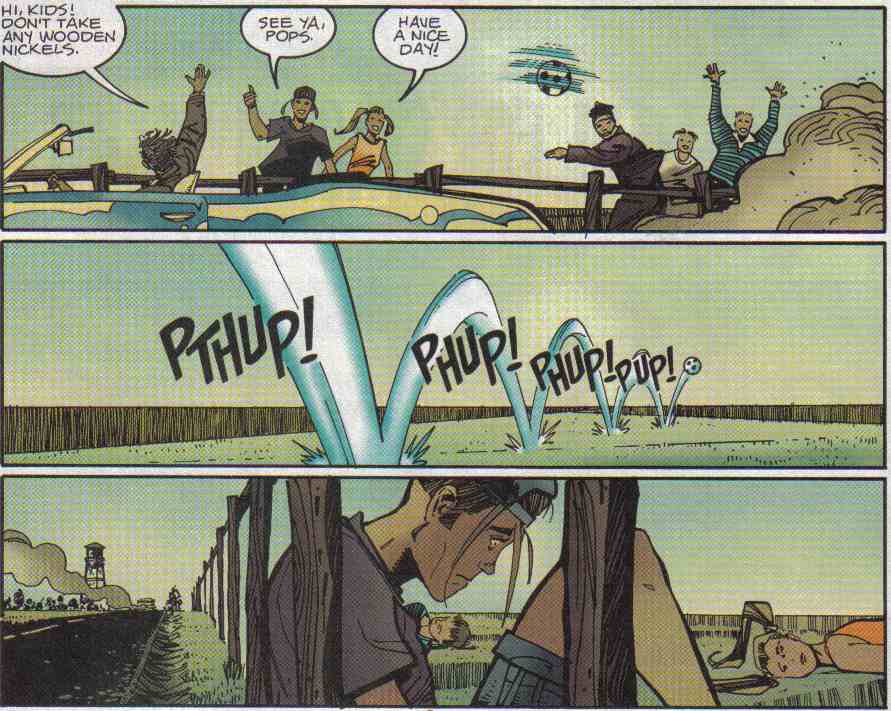 So our build up is a town that appears to be possessed yet is covering it up when outsiders appear. Ok, where’s the connection? We then move on to Dan Turpin waking up sensing something wrong. I am too. Where’s Orion? A couple more pages of setup on New Genesis as Lightray and Orion’s mother, Tigra, discuss where Orion’s gotten off to. Seems Tigra has just revealed in a prior New Gods series that Darkseid isn’t Orion’s Father. This doesn’t sit well with her son and he’s off brooding about it. 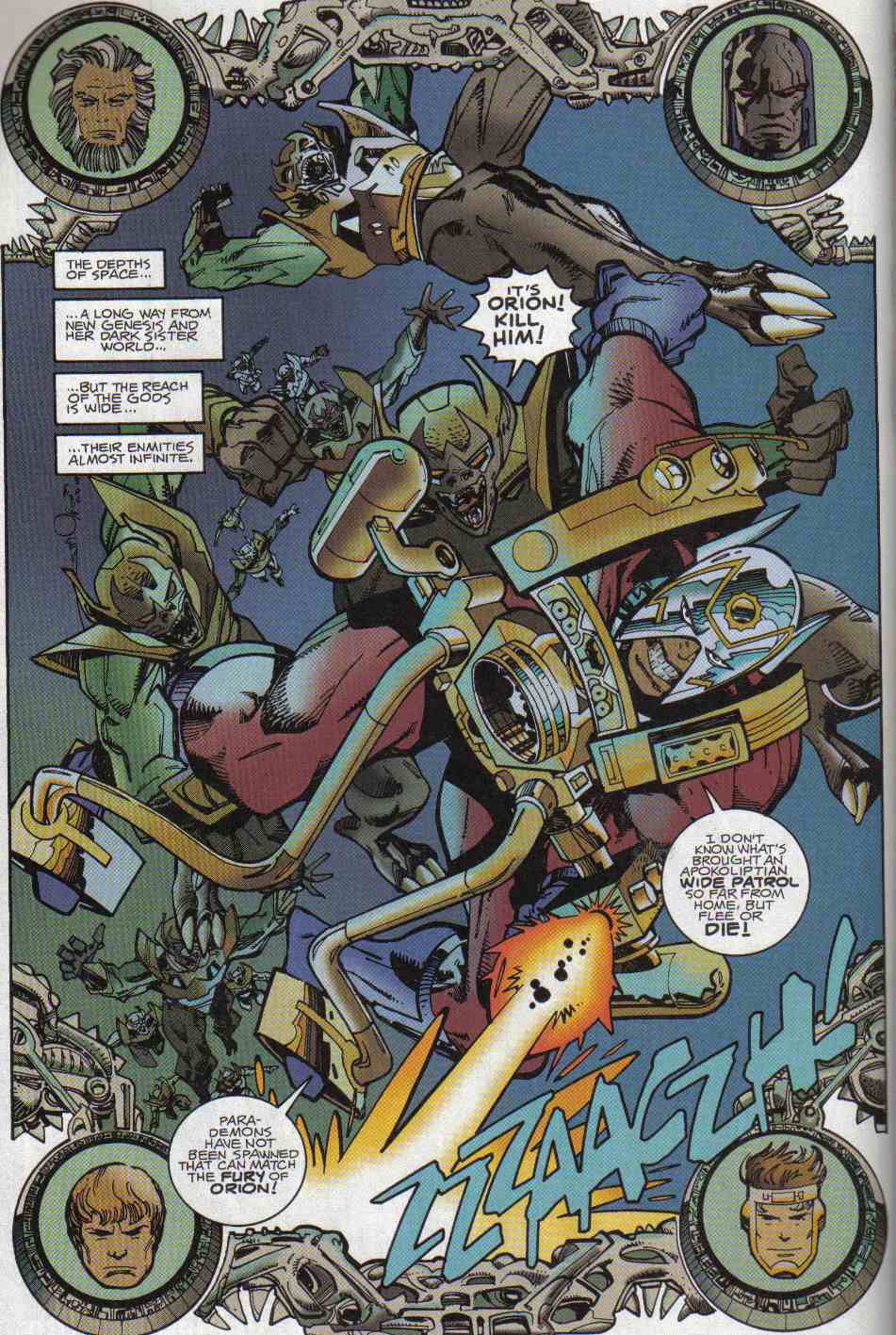 Nine pages in and there’s our boy. Stunning isn’t it? Orion’s idea of brooding is kicking some para-demon butt. However, since Tigra’s come clean about his parentage, it looks like the para-demons aren’t giving Orion the same amount of respect or the wide berth they used to. Still Orion dispatches them with ease. And maybe he was brooding, as we soon find that the para-demon band was actually patrolling near the source wall. Orion was simply here to ask the newly elevated Highfather the truth about his origin and what that might reveal about himself. He receives no answers. Orion decides to seek out Darkseid and force an answer from him. That leads him to Apokolips, where Darkseid’s newest servant, Justeen is plotting to overthrow Desaad as her master’s favorite. She has just dispatched a squad of suicide jockeys to take down Tigra and avenge the wrong done to Darkseid. Darkseid himself is off-world, apparently working with Desaad to some twisted purpose with that zombified small town on Earth. Oh what tangled, elegant webs you weave, Walt.

Orion proceeds to besiege Apokolips, leading Justeen to release the imprisoned Kalibak. Moments before Darkseid’s more feral son finds him, MotherBox detects that Darkseid isn’t on Apokolips and that his trail leads to Earth. Before leaving, Orion can’t resist one quick beat-down on his half-brother. 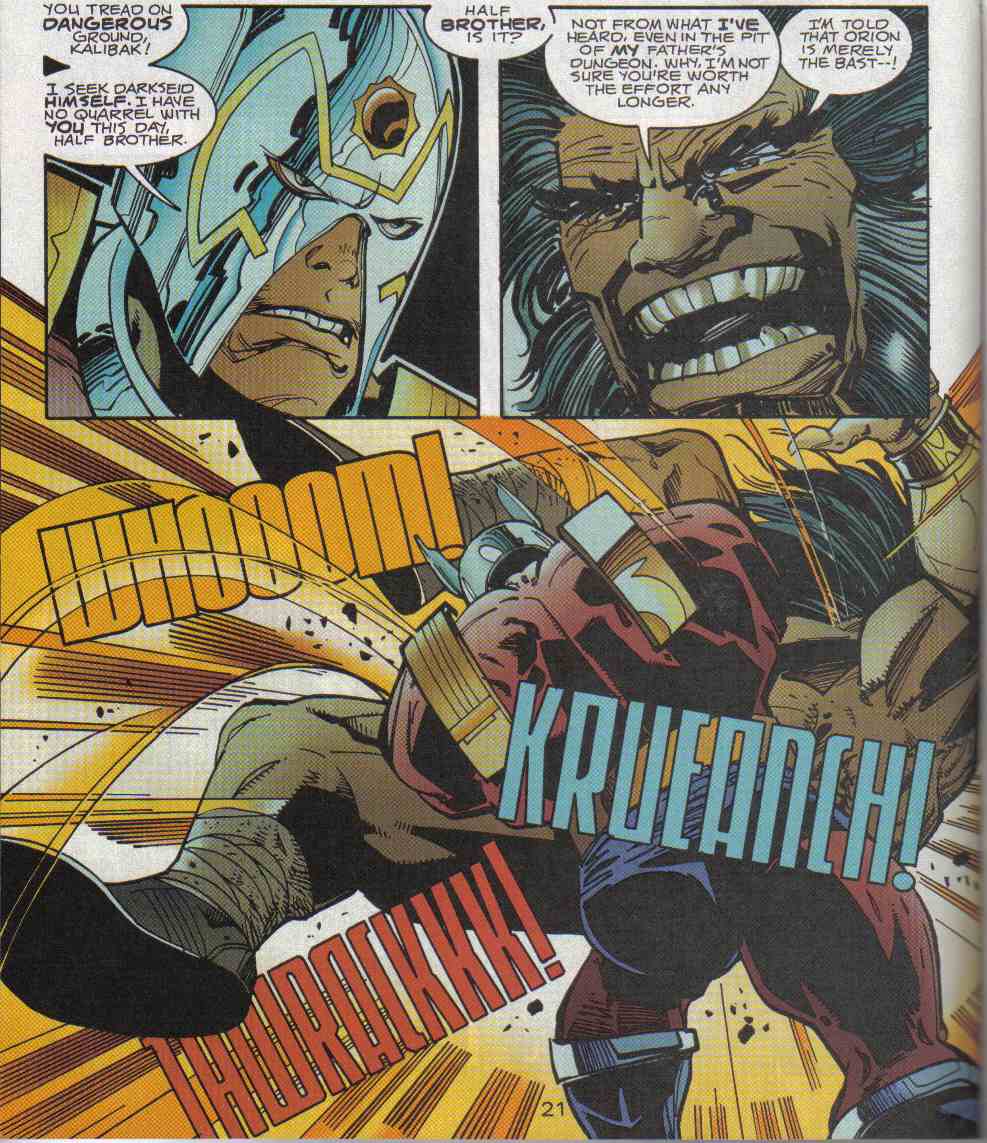 God, I love that art! Those huge sound effects done up in perfectly lined up hollow type make me giggle like a school boy on summer break. So what if Justeen looks like a Hela’s sexy teenage niece. So what if this issue feels a bit thin on the Orion. I know that Simonson is building toward much better stuff to come. So what if we only see a shadowed hint of Darkseid. He’s going to be a major factor in this arc. The art through-out the issue is easily on par with the Thor issues and so far the story is classic Simonson. True greatness from the crapbox.
Posted by SonOfCthulhu at 7:51 PM