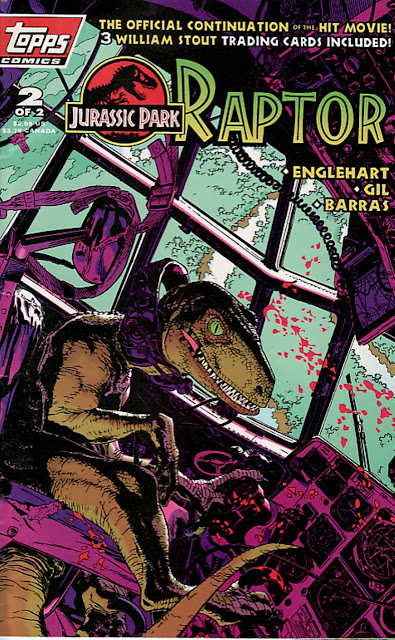 Forget the snakes, we’ve got Raptors on a Plane! And they’re FLYING IT!

Topps Comics was a division of the world famous trading card company. They decided to jump into comics in the boom of the 1990’s. Like many other companies new to the comic book field, they made some mistakes. One of the mistakes they didn’t make was in obtaining licensing for hot properties like X-Files, Jurassic Park and some concepts from the retired (at the time) Jack Kirby. Headed by Ex-Marvelite Jim Salicrup, Topps also attracted some major talent in terms of writers and artists. The industry shrink was too much for them and in 1998 they closed doors.

But not before Topps had a chance to release a movie tie-in to Steven Spielberg’s adaptation of Michael Crichton’s Jurassic Park and three follow up series. What we have here is the middle JP series, sandwiched in between 9 issues of “Return to Jurassic Park” and 4 issues of “Jurassic Park: Raptors Attack”. With all that talent you’d figure that the JP: Raptor book would be trouble free. It isn’t. Mainly because of the numbering issue. It’s issue number 2 of a 2 part series. And it ends by being continued in the next issue. That to me is a big problem, both math-wise and marketing-wise. When I invest in a mini-series, I believe it when the publisher says how many issues it will contain. When they continue the story to the next mini-series, I feel cheated. When I pick up number 1 of a mini-series only to find I’m in the middle of an ongoing story, I’m also a bit distraught. So when you say 2, end the story in issue 2, Topps.

How is the actual story in JP:Raptor? Not bad, really. It’s written by long time GL scribe Steve Englehart. Art chores are done by Armando Gil, Dell Barras and Fred Carrillo. Never heard of them and likely won’t again. The art is on the simplistic side and the colorist was only given two kinds of palettes to work from: neutrals and neons. Doctors Grant, Slatter and Malcolm reappear in pretty close likenesses. What we end up with is a not so great, not so bad book that plays to fans of the movie.

As we begin our story, Grant and Slatter have been captured by a big game hunter by the name of George Lawala. He’s also captured five newly hatched baby velociraptors. In our opening scene we find our good dino docs in one cage in the hold and the raptors in the other. 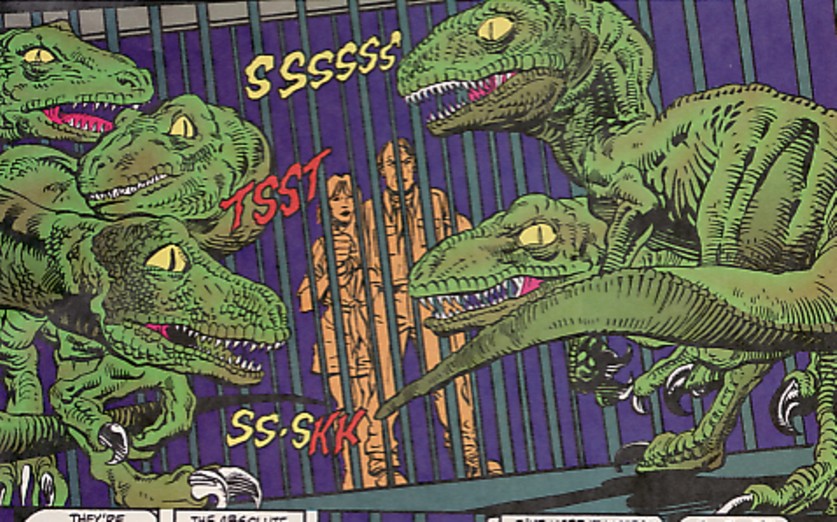 Grant gets upset because Lawala has gotten the raptors off of Jurassic Park. He asserts to Slatter that the raptors would like nothing better than to “take on the world”. This is absolutely the worst thing that could happen in his opinion. But there is a light at the end of the tunnel.

We’re all very proud for you doc. Oh, sorry. Grant is going to use it to pick the lock on the cage they are in. The raptors see what he’s doing and start imitating his actions. About this time Lawala decided to make a surprise inspection of the hold. He catches Grant in the act, causing him to break his buckle's long tongue off in the lock. Try getting your pants to stay up now, Dr Grant. Also Lawala’s got an overly high opinion of himself, it seems. 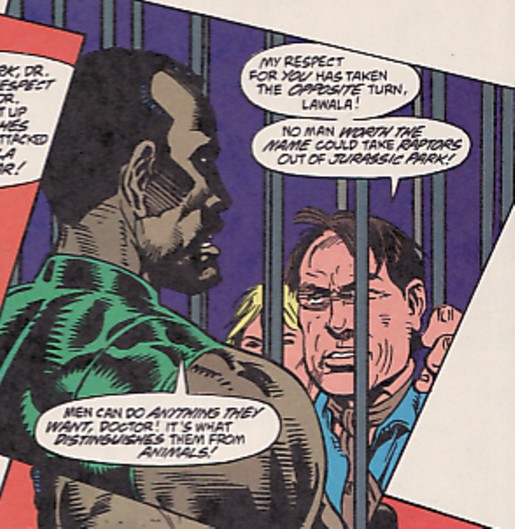 I’m thinking that being able to write his name in the snow has gone to Lawala’s head. Lawala and Grant engage in a verbal war of what man should and shouldn’t do, what makes a man worth of being called a man but stop just shy of telling “your momma” jokes. Grant tries to trick Lawala into disclosing who he’s stealing the raptors for, but it doesn’t work. Instead Lawala tells them they are going to be transferred to a sea plane and since he doesn’t want any scuffling during the move, he pulls out a device to knock out the raptors. 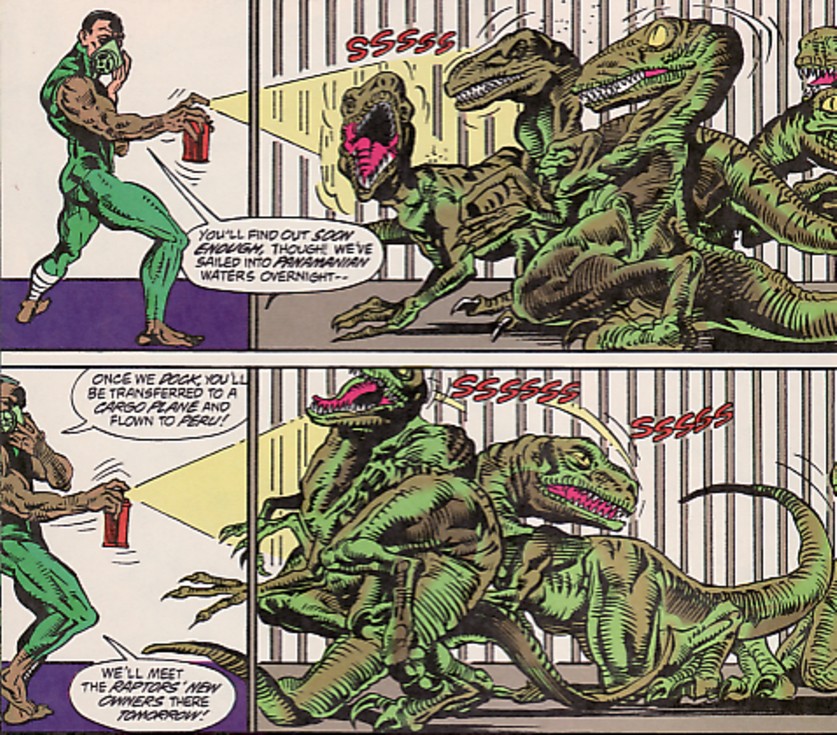 The knock out gas Lawala is using comes in two scents: regular and pine fresh. Who makes knock-out gas in an aerosol can? Look at how insanely powerful that stuff is. He sprays it on the raptors and they fall asleep. It doesn’t even look like it takes any time to take effect. Pity they didn’t have a couple of cans of that stuff in the movie. 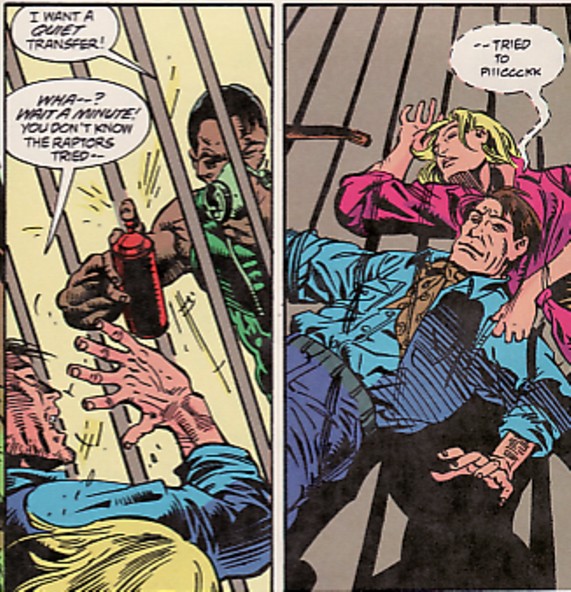 It’s all purpose too. Stuff even works on people. I really could have used a few cans of this during my dating years. What? My girlfriends all had very violent ex-boyfriends. What did you think I was implying?

So, both docs are asleep and they didn’t get to warn Lawala about the raptors trying to pick the locks. Both of them get shoved on a plane and off they go with the baby dinos. Meanwhile the book checks in on Doctor Malcolm, who is in a hospital bed. The artists do a fair impression of Jeff Goldblum’s likeness. He is updated on the situation of Grant and Slatter going missing and utters some chaos nonsense to explain his position. 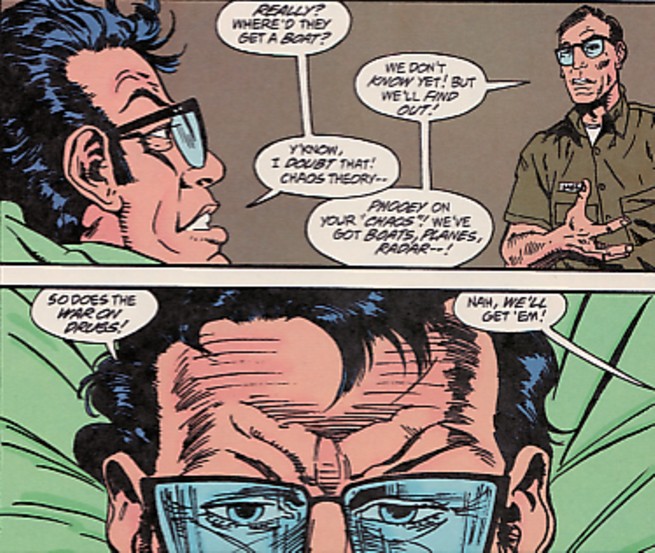 Slatter and Grant wake to find they’ve gone from frying pan to fire, since the raptors have picked the lock on their own cage. I’m sure this is NOT being conveyed correctly, because that cage looks too small for them to have escaped harm for very long. Those raptors would have hooked them and drug the to the side of the cage where they could tear them into bite size chunks that fit through the bars. 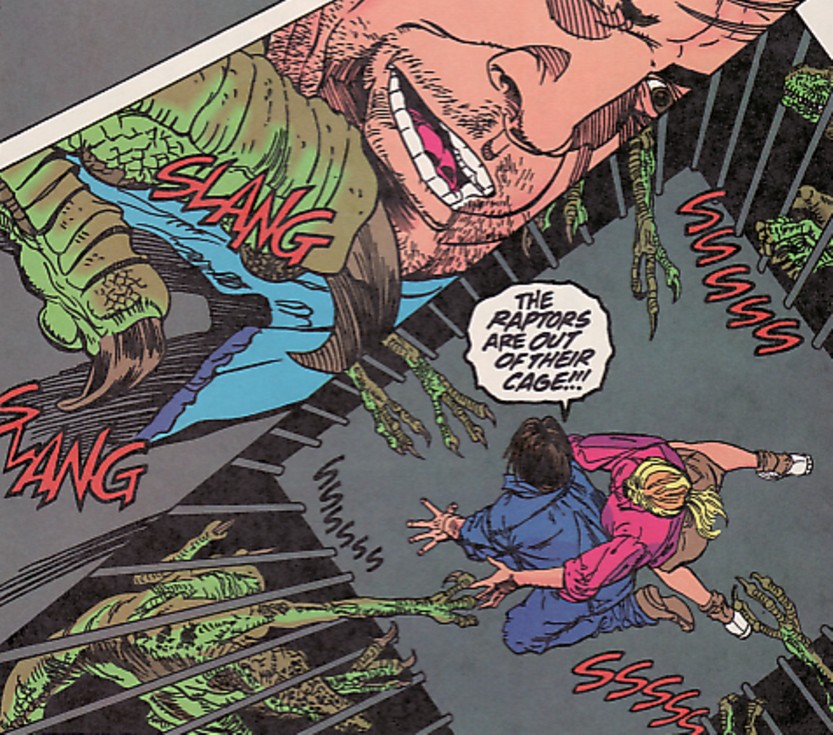 Next the raptors try to pick their locks (they're going to send them back to mother in a cardboard box? You better run!…No Floyd fans? Never mind), but fail because Grant’s long tongue is stuck in it still. Sorry, his belt’s long tongue is still stuck in it. Right about then Lawala and the pilot hear something shifting in the cargo hold. Lawala tells the pilot to lock the door behind him while he goes and checks. This is very good advice.

Lawala is attacked by one of the raptors (one? I thought the hunted in packs like wolves?) but is able to perform a perfect “Captain Kirk”. 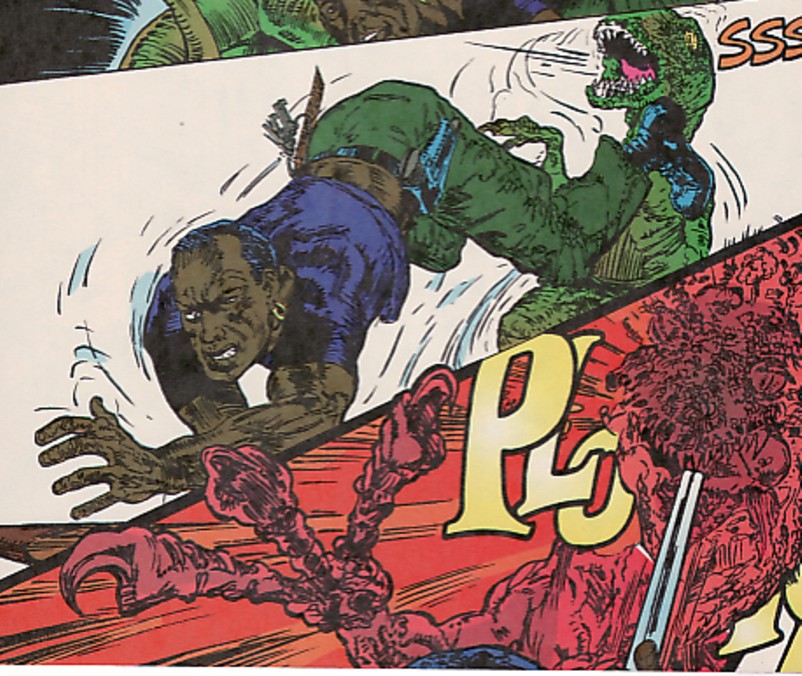 The “Captain Kirk” is a term for a very specific move that William Shatner would perform in the original Star Trek series. It occurred with stunning regularity in most normal fights between Kirk and a larger sized, stronger opponent. The “Captain Kirk” maneuver involves running back a pace or two and then executing a flying kick toward your opponent. Except you totally expose your back while doing this so that you could land shoulder first on to the stunt bags provided for the actors. On TV or comics it looks great, but in real life you’ve just left your back and side open to the enemy while simultaneously managing to lay down on the floor in front of them. Luckily Lawala has a shotgun handy. One raptor down and four to go.

Lawala decides to let Grant and Slatter out to help him. Oddly he seems to have run out of that special aerosol sleep aid that was so handy on the boat. He gives them shotguns and they decide to split up so they make better targets, er… so they can cover more ground. Since the cargo plane is immense and all. 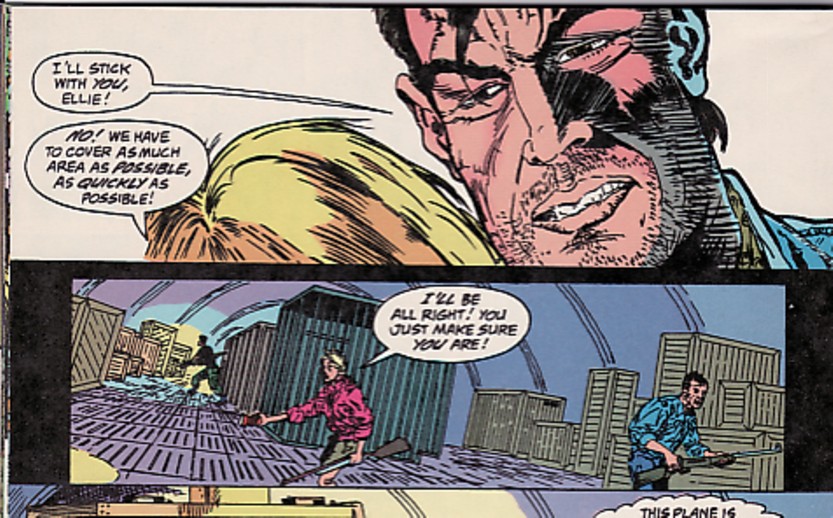 Lawala bags another one and we are down to three-on-three odds. Pretty good going, until Brennan the pilot decides that there is just too much shifting around going on back there. He picks up a rifle and heads back to help out. Before he goes, Brennan clicks on the autopilot while uttering an ominous warning that it should handle things okay BARRING MASSIVE WEIGHT SHIFTS. Yet that’s what is already occurring. Brennan is a big dummy who deserves to be raptor chow.

And next page he is. After almost being shot by Lawala, Brennan is torn to shreds by a raptor right in front of the game hunter. Lawala gets one shot off before he goes down as well. So that’s raptors two, humans three. Or almost three. The raptor is only mortally wounded in the neck. Suddenly Ellie appears on the scene. 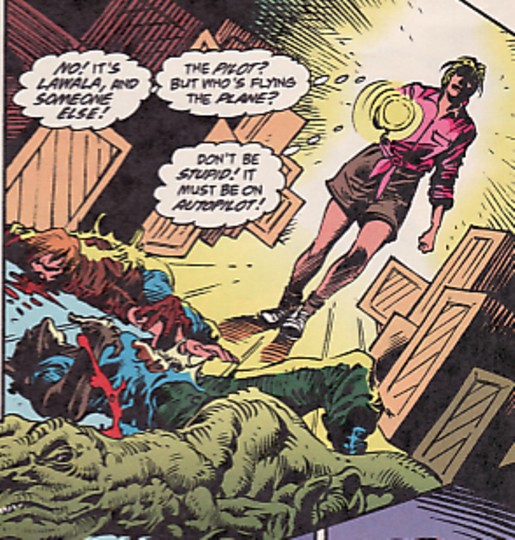 Yes, Ellie. You could just let it die. If the roles were reversed, it would bite you in two like a Pringles chip. Instead she plays “Prehistoric Vet” while Grant lures the remaining two raptors away from her and locks them in a crate. He then swings that crate over the open cargo bay doors. Why, you may ask? I don’t know why. I guess he didn’t feel like he could shoot them without Ellie then trying to tourniquet their gunshot wounds immediately afterwards. 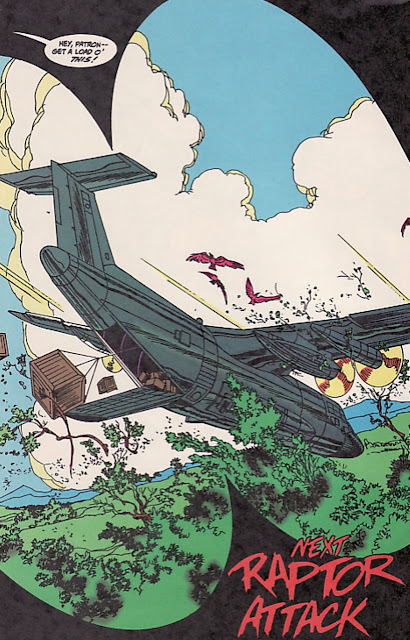 Suddenly all the shifting weight in the cargo hold knocks out the autopilot. While Alan struggles to crash land the plane into the relative safety of the jungle, our issue ends. I can hardly wait for issue three of this two part series. Or should I say issue one of the next four part series: Raptors Attack.
Posted by SonOfCthulhu at 3:52 AM