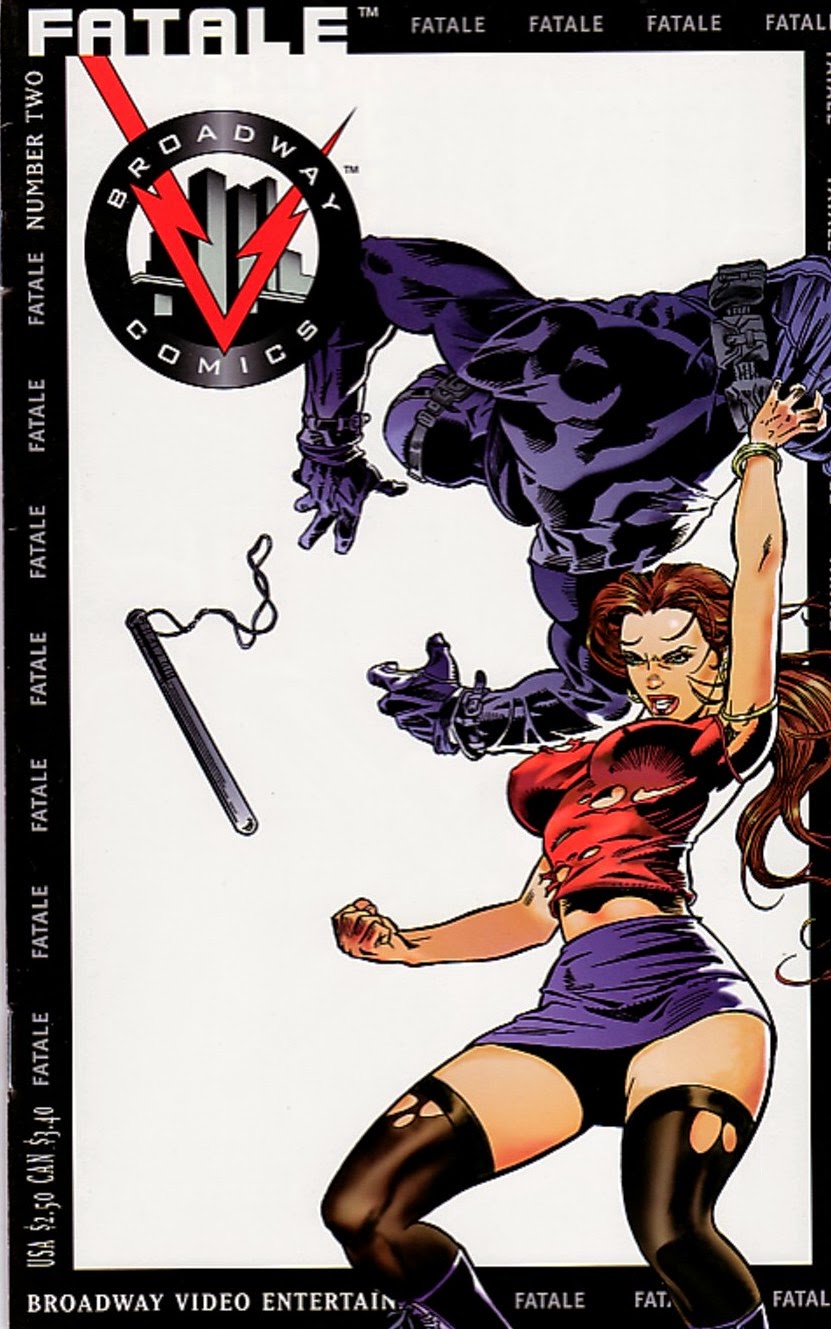 I don’t know what you were doing at age 13, but I’m pretty sure that none of us were contributing as much to the business of comic books as the lead co-writer of our next book. Jim Shooter started selling both art and stories to DC comics when only a teenager. Even though he never expected to stay in the business, his stories proved so popular that fans of the Legion of Super-Heroes coaxed him back after he graduated from high school. His path lead him from DC to Marvel as an assistant editor sometime in the mid-seventies. Marvel’s editorial top spot was a proverbial hot-potato at the time and it wasn’t long before Shooter took over the seat. For close to ten years he guided Marvel through some of its (arguably) best years, ending his tenure in 1987 when the company changed hands. By this time comics must have gotten into his blood, and Shooter founded Voyager Communications with a comics publishing unit under the banner Valiant Comics. He was ousted years later in a corporate dispute with Valiant’s partners. We’ve seen where he headed to from there, as we found him with the “Warriors of Plasm” title as writer and EIC for Defiant Comics. We’ve already learned that Plasm caused a court battle with Marvel over their failed British imprint “Plasmer”. A court battle that spelt the end of Defiant Comics.


It wasn’t the end of Jim Shooter, however. Shooter went on to startup Broadway Comics, an offshoot of Broadway Video. Broadway video was the production company of Saturday Night Live and did editing work on many of the SNL movies. Broadway Comics was short lived. It produced a handful of titles (including “Knights on Broadway”) before it was sold to Golden Books who scuttled it.


The only title that got a chance to complete a story arc was Fatale, a book that tried very hard to distance itself from the supposed pack mentality of superheroine comics at the time. While I think everyone should judge this book for themselves, I find very little in it to differentiate it from any other books on the shelves now or then. It did feature newcomer J.G. Jones doing art chores and many of the art panels show his greatness to come. But great art wasn’t the core of what Fatale was suppose to be about. Shooter, the three co-writers and Jones take up eight pages in the back explaining how 200 pages of written information had been compiled on Desiree a/k/a Fatale, how they didn’t like that the portrayal of women in comics was the same as male superheroes (I think the phrase “Rambettes” is thrown around quite liberally.) and how much effort they put into doing a big-boobed heroine who had to fight gravity by wearing proper supporting garments. I’m not lying about that last part either. Shooter even mentions that he wants readers to notice that Fatale lives in a world with “gravity”.


They all talk up the character into this living, breathing, realistic blow-your-socks-off breakthrough yet the issue shows just another overly busty action chick. A "Rambette," to borrow their term, and not a very effective one either. Fatale is an energy siphon similar to Rogue. She doesn’t have superheroes to drain as far as I found, but she gets by pretty good sapping regular Joes. It also seems that she is in complete control of this power because in the next issue (I have it too) she does a multitude of things that cause her skin-to-skin contact with people who show no side effects. And no, that skin-to-skin contact isn’t in an erotic free-for-all. To start off this issue, she’s been captured by a crack team who knows her powers and how to defeat them. They’ve also captured her current love interest who happens to have the exact same power. Here we have Desiree struggling to get free from the captors while they are being chased by a mysterious benefactor. 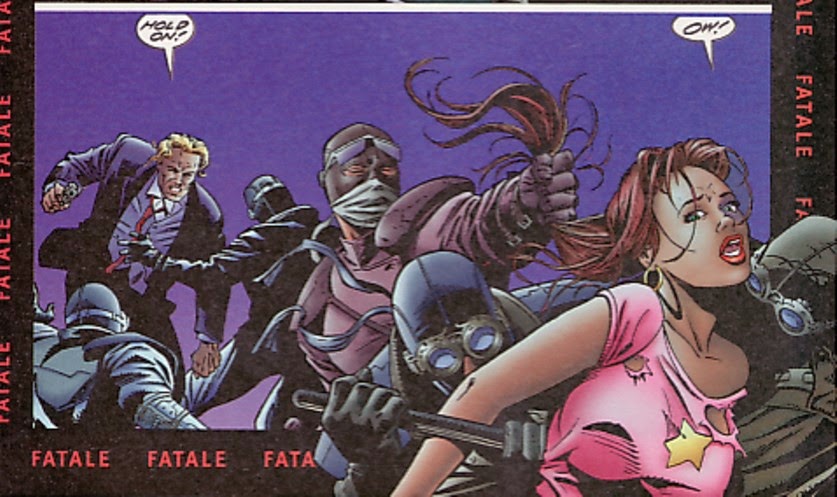 Get comfortable with that pose. Fatale ends up trussed for about 60% of the book. I guess in real life superpowered women would be tied up by non-powered men a lot. Seems rational. Bill, her boyfriend with superpowers, gets the same treatment only worse. 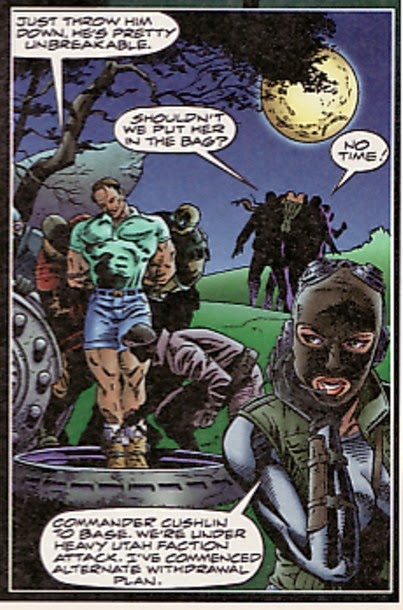 "Just drop him. He can't be hurt." Later on these same guys will try to prove that by taking turns hitting Bill in the crotch with baseball bats. Natalie, the leader of the agents doing the capturing, is possibly the best written character in the book. Here she is being bossy to one of her guys that got sloppy.

But no one is near the ass-kicker as the guy following Desiree. I’m not even sure that he doesn’t have superpowers at this point. Look at him take on hordes of ninja clad secret agent dudes. Even if Blondie isn’t a mutant or alien or something, I’m telling you right now, I wouldn’t want to mess with him.

No matter how good mystery man is, he still can’t prevent the agents from escaping into the sewers with their prizes. It’s down these dank holes that we discover that Natalie and Bill have some history together. Something tells me they didn’t part as friends. 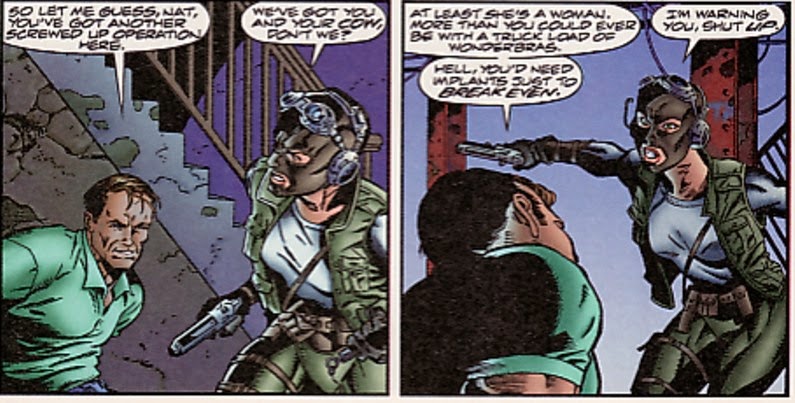 Woah, woah, woah Bill. This lady has both you and your current girlfriend helpless and at gunpoint. I believe it’s time to rethink the strategy of pissing her off so she’ll make a mistake. What do you think this is? A Sable: Return of the Hunter book? 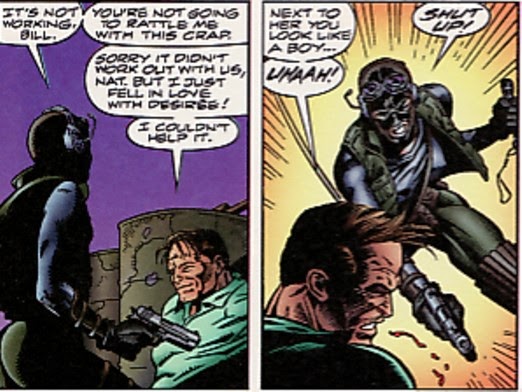 I’m telling you Bill, this isn’t looking good. Natalie’s likely to shoot you in the head and leave you in the sewer.


Well, some plan of Bills appears to work out, because the guys carrying him slip up enough to where he can kick them into the guys carrying Desiree. She busts free and hot foots it down a sewer tunnel with a couple of guys in pursuit. Natalie doesn’t take Bill’s actions so well. 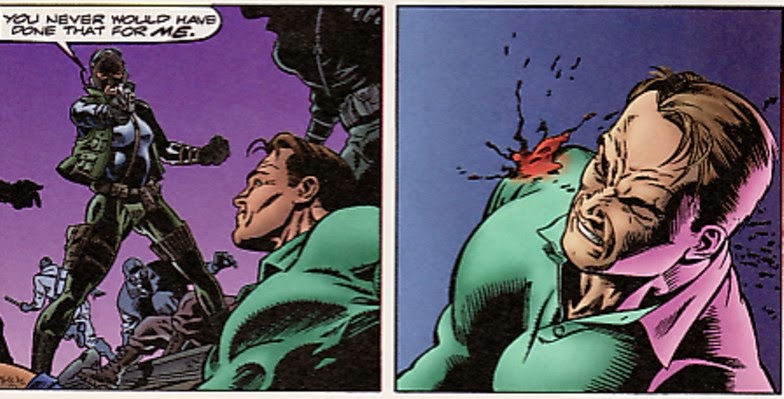 I don’t think even Dr Phil could help them get back together, do you? I tried to warn Bill, you are all my witnesses. Meanwhile, Desiree trips a guard and finds some exposed skin to use her draining touch on. Note that this shot features a realistic bosom with added gravity drooping action. Remind me again why this was something I wanted to see in a comic. 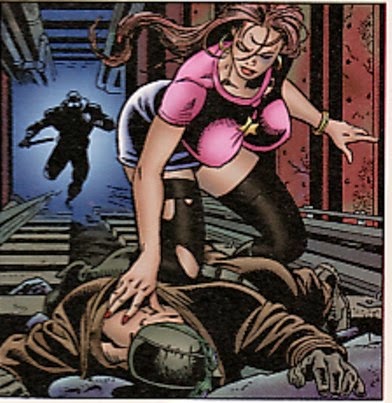 Desiree drains one more guy and then Natalie catches up with her. Only Natalie. No other agents around. My thoughts at the time I read this plot development were that Natalie was toast. Desiree has the combined strength of two agents at this moment. So let’s see how it goes, shall we. 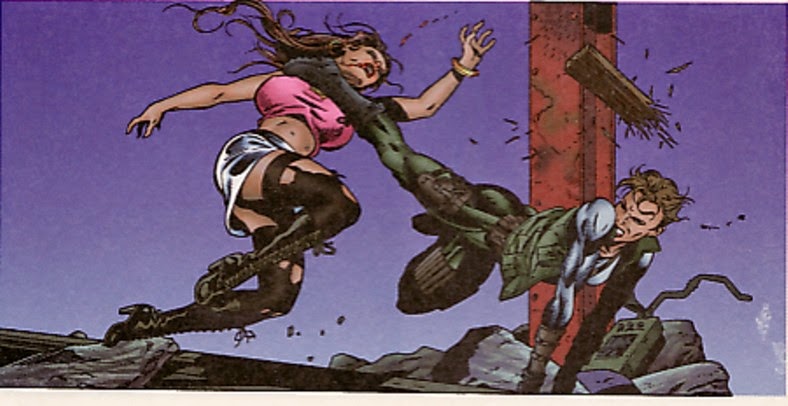 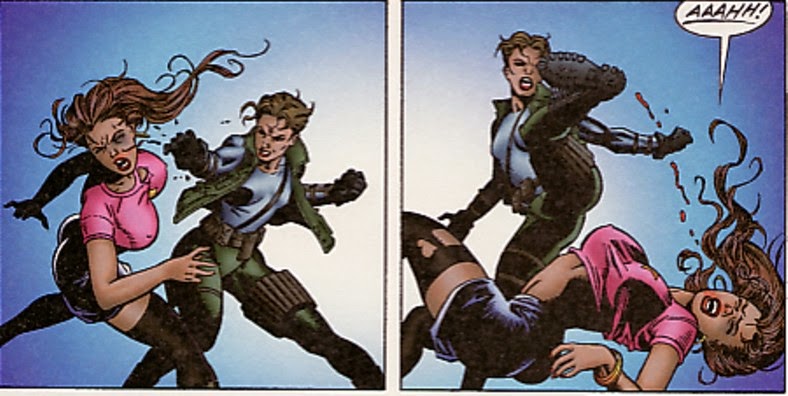 Yes, Natalie hands “Fatale” her own head on a pike. Damyum, girlfriend. Who needs superpowers? This just makes me wonder how many pages of background the four writers of Fatale have on Natalie. Because after this knock-down fight, I’d rather read Natalie’s adventures than Desiree’s. Who cares who’s boobs are bigger. (Did I actually say that?)


It’s all for naught as she is caught anyway. The good news is that these are blondes’ men from the beginning chase scene. He’s here to rescue her from the Natalie’s bad guys. Also he’s willing to shell out for plastic surgery to fix her recently broken nose. (Way to go Natalie!) 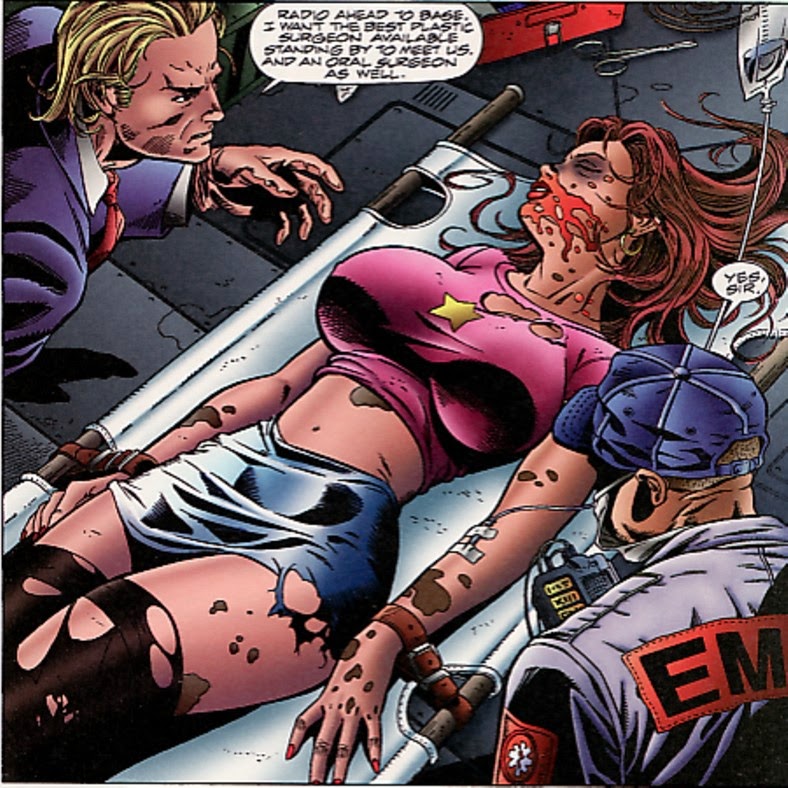 Then begins the 8 pages of product endorsement/congratulatory mutual hand jobs that all four writer/creators engage in over their success at making a truly different super heroine. Two of them are unfinished art for a planned mini-series origin story. The company folded before it could be published but according to Shooter it was plotted and ready for artwork. So Fatale had a brief run and then the company bites it. Never fear though, we'll see Shooter again. Also, I’m not against Fatale, but the idea that this was something different is utter nonsense. Perhaps that should read udder nonsense.
Posted by SonOfCthulhu at 8:59 AM