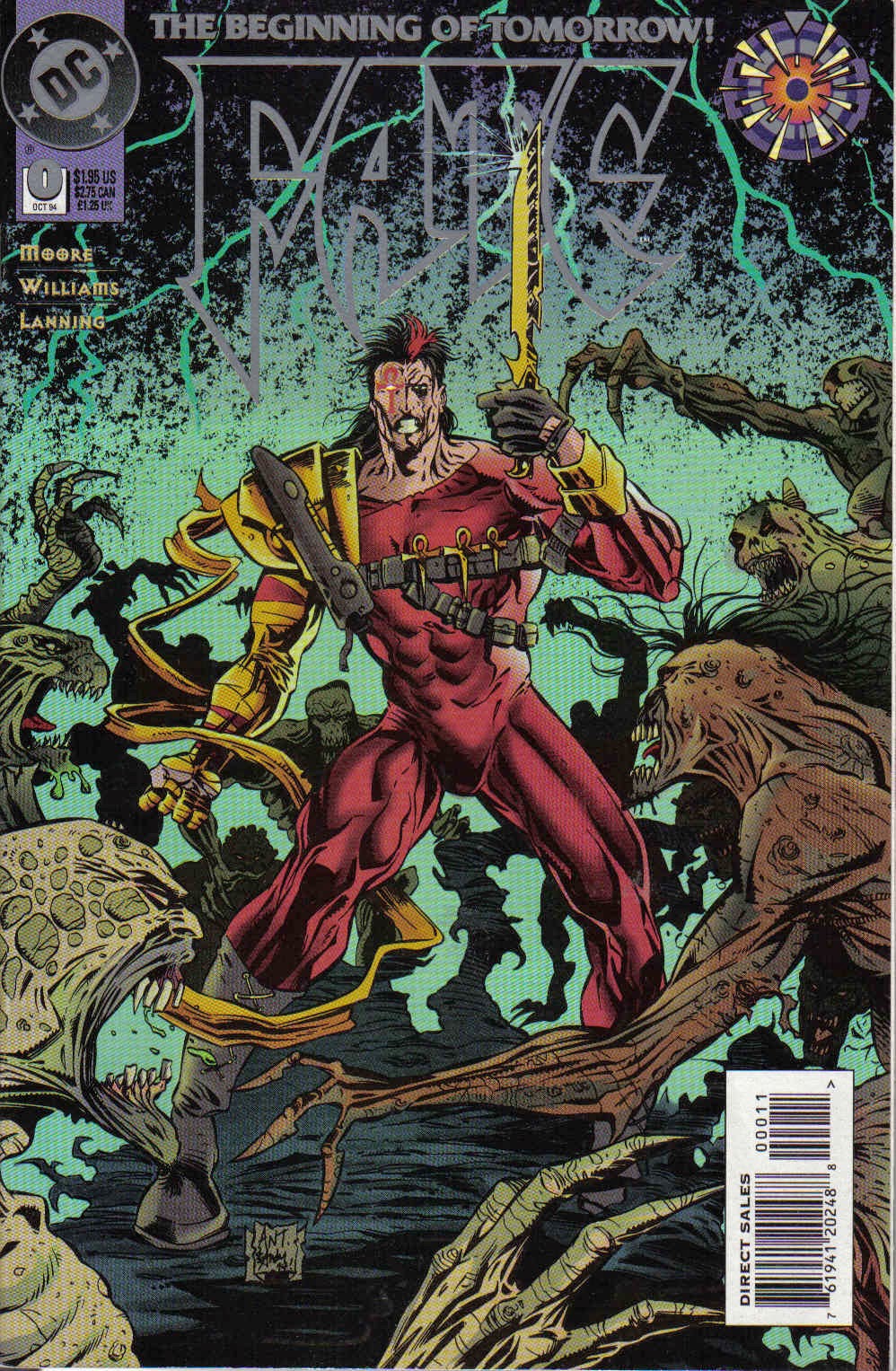 Look everyone! It's "Magic Cable!" Please tell me there’s a doctor in the house…

Dr. Fate really gets the shaft at DC. In all of the Marvel Universe there are only three real magical powerhouses: Dr Strange, Shaman and Agatha Harkness. Now I’m not counting all the mutants that can use spell energy or whatever. After all, they're mutants first and foremost. Or Dr. Druid because he’s both dead and lame. So out of these three, the pecking order is pretty easily discerned. Dr. Strange is on top. He’s the Sorcerer Supreme of our whole dimension. Not world or solar system or galaxy, but the whole damn dimensional plane is his to protect. Numero Uno Spellcastero in the Marvelverse equals Dr. Strange.

Dr. Fate should get the exact same treatment. He should be equal to Dr. Strange. He serves the Lords of Order, highest existential good guys in all of DC. He casts spells of all sorts and has great props. For a direct comparison I'd like to introduce the Helmet of Nabu and Amulet of Anubis from Dr. Fate to Doc Strange's Cloak of Levitation and Eye of Agamotto. See the parallels beginning to form? Fate even has the Tower of Fate hangout that is on par with the coolness of Strange’s Sanctum Sanctorum.

Yet Fate too often gets lost in the crowd of DC’s other mystical heroes. The Spectre, who is the embodiment of vengeance, powns him in the power department. Likewise the Phantom Stranger gets to be more "mysterious" than the good doctor most of the time. Yet both those guys embody all the personality of a weather pattern. They exist as impersonal actors guided by some greater “higher purpose” entity that leaves them little control, making them less heroes and more natural agents that work to our benefit. Zatana can’t match him in spells yet would get top billing just based off those fishnet hose of hers. Heck even Doctor Occult with his goofy magic Frisbee, the Symbol of Seven, gets membership in groups that Fate is excluded from like the Sentinels of Magic. Mister E, Timothy Hunter, every third person from the ancient city of Atlantis, Detective Chimp, Etrigan the Demon and countless others muddy the waters when it comes to DC’s pool of magic. The result of all this is that Dr. Fate the character doesn’t get a big enough role and occasionally follows behind a monkey and a demon in terms of contributing.

Which is very sad. Because the original Dr. Fate was a pretty cool character. Kent Nelson was an archeologist who discovered a hidden tomb containing a helmet imbued with an entity of the mystic Lord of Order known as Nabu. Nabu trained Kent and gave mystic artifacts used to hold back the Agents of Chaos. Joined by his wife Inza on several occasions, Nelson experienced tons of mystical adventures. In the beginning Inza's role was essentially that of man-servant, think Wong with boobs. Put all of this backstory in perspective and this is a great beginning for an occult hero team.

Then in 1988, after a successful stint in Keith Giffin’s Justice League and a 4 issue mini, the character received a new series that might have heralded a new lease on life and a shot at the greatness he deserved.

If the editors and writers hadn’t dropped the ball, that is.

It was determined in DeMatties’s mini that Kent Nelson would be dropped and the Dr Fate mantel would be passed on to a new set of heroes. So DC aged both him and Inza, resulting in their demise. Two people would now be required to summon Fate, a woman by the name of Linda Strauss and her step-son Eric. This lead to a creepy kind of vibe in the book that felt a bit like something sexual was going on between a mother and step-son. At some point in this series Linda became Fate by herself causing Dr. Fate to appear to have changed sexes. More convoluted stuff caused Linda and Eric’s demise and the rise of Inza as Dr Fate. That’s kinda crazy since she was dead and all. While that series lasted almost four years, it was not a rousting sales success.

Well, DC never fixes anything by making it simple, so in 1994 Jared Stevens became Fate. One would assume that Jared didn’t finish his post-graduate work on metaphysical slimes and oozes, so the “Doctor” title was dropped. His first issue was directly following the Zero Hour DC universe reboot. Let's meet Jared while he’s on a plane flight illegally smuggling artifacts into the country. 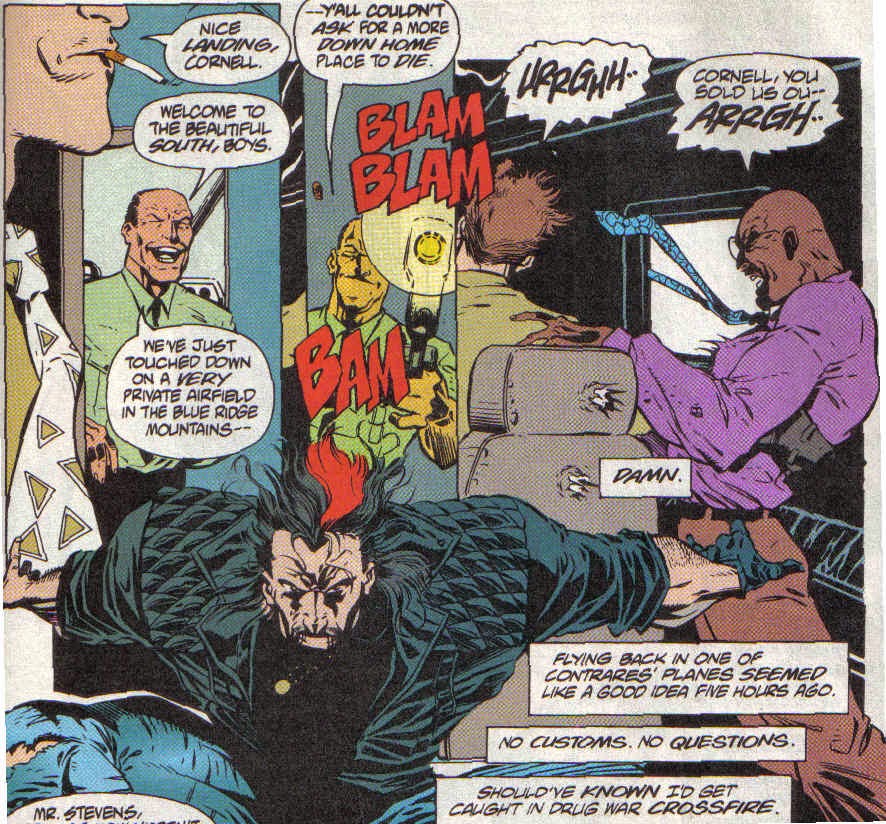 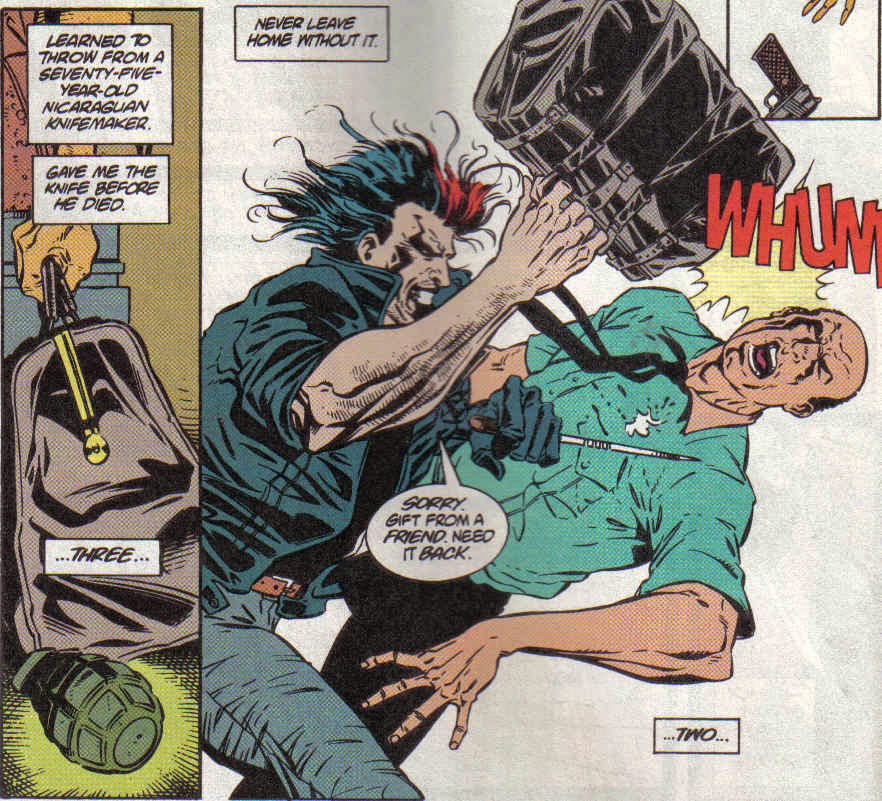 I’m not sure about the “Cyndi Lauper” red shock of hair. He has it pre-Fate, so the reason it is there couldn’t be supernatural. Maybe he’s a metro-sexual? Oh, and storywise, he has just had a crazy dream where he fights demons. Not sure if that’s because he is in tune with the spirit realm or because the articles that he’s smuggling are Dr Fate’s helmet, cloak and amulet. Seems he’s going to have a bit of a problem getting off the plane, however. One gunman and a live grenade may make this a short trip. Take special notice of the art here. It has an almost Giffen like tone to much of it. He isn’t credited anywhere but you could almost swear he was doing breakdowns.

That knife becomes important later. So Jared makes it off the plane just as the grenade goes off and he is vaulted through the air. When he awakes, he is confronted with zombie-versions of Kent and Inza Nelson. They transport him to the Tower and begin to question him about what he was smuggling. 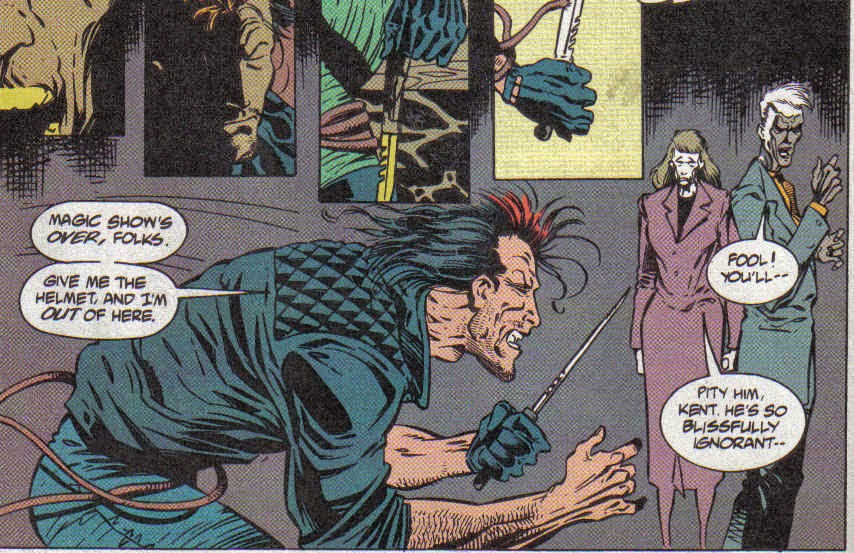 Note how little respect Dr Fate is given here. He was a member of the Justice League and the Justice Society. Seems like Jared should at least know his name. Jared takes matters into his own hands and cuts himself free of the ropes Kent has tied him with. About this time two demons working for someone called Kingdom show up. Kent and Inza are killed (again, shesh – why bring them back?) and Jared is left to find his own way past the demons and out of the tower. Now would be a good time to mention that Fate’s tower doesn’t have any doors or windows. 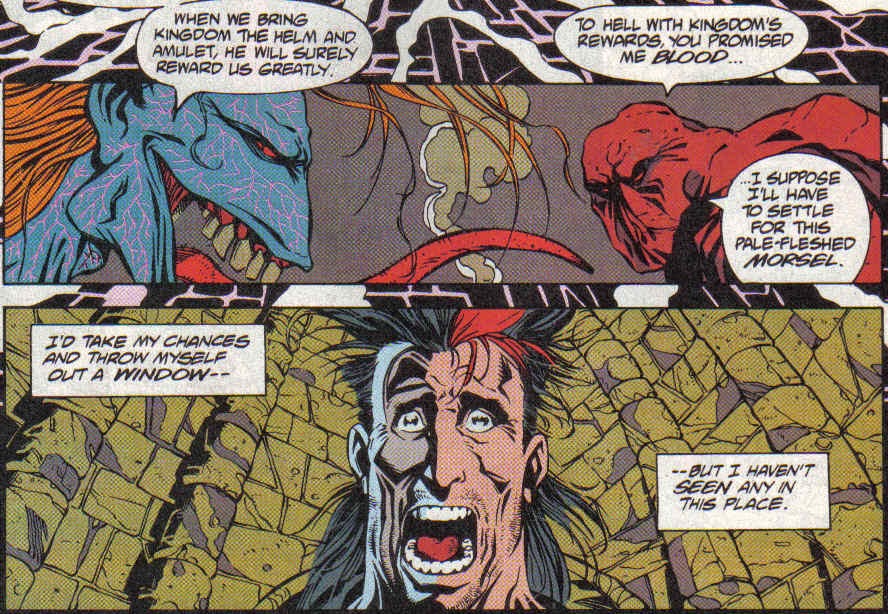 Yeah buddy, you’re pretty screwed. The demons have acid for blood, which Jared finds out by poking one with his trusty knife only to pull back a stump. He gets smacked around a bit and then one of the demons (not the smart one) crushes Jared’s hand while he is holding the Amulet of Anubis. This levels the tower and causes Jared to see a vision of his future self as the new Fate. I thought for sure he was going to say that getup is impossible. Meet the new Fate, ladies and gentlemen. Or at least what will pass for him in this series and the next, after which DC comes to their senses and changes him back. What you have here is kind of a mystical ninja-esque knife-fighter. Not sure why this idea was taken over just bringing back the original Doc Fate, but you have to give them points for blatantly ripping off Marvel's Cable character design.

Fate escapes with the demons hot on his trail while using the Cloak of Destiny to bind his wounded arm. Any port in a storm and all that, but this is a bit like someone using the Eye of Agamotto as a drink coaster. He makes it back to his ex-wife’s apartment and the ending graphic shows that one-eyed tattoo version of his face.

In 1999 DC came to their senses and offed Jared, restored the artifacts and brought back the Doctor. All that was left of Fate was a bad taste in comic buyer's mouths.
Posted by SonOfCthulhu at 5:57 AM