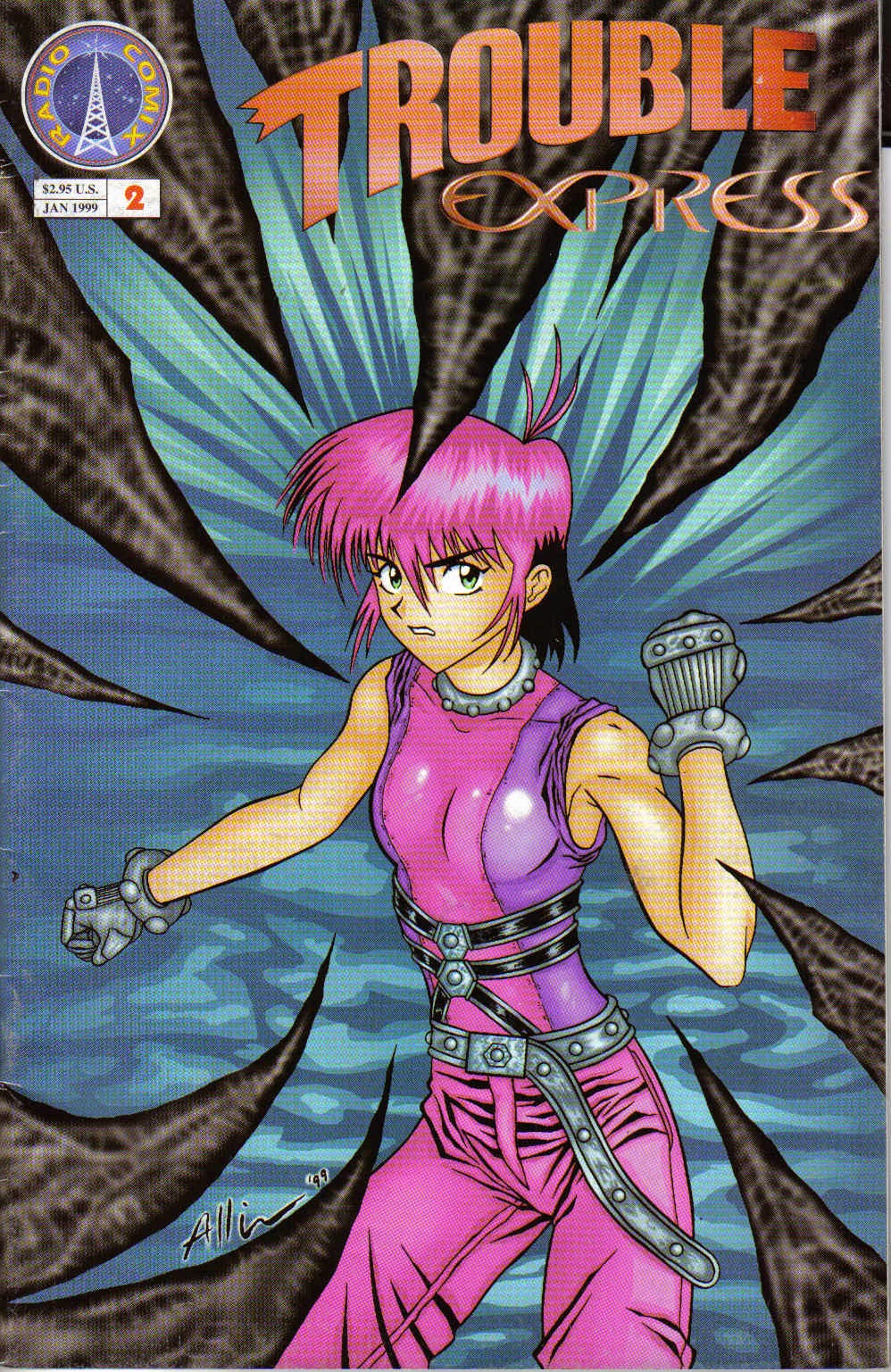 I can tell by the cover art, this will be an express trip to manga hell.


Antarctic Press, makers of fine comics like American Woman, decided to cut production of translated manga, adults-only and (shudder) anthropomorphic titles in 1996. Two ex-employees founded Radio Comix and have successfully kept afloat to this very day on those properties. (Note: at the time I originally wrote this in 2007, that was true.) Operating primarily on furry-porn, the Texas publisher produced other mags as well, including the four issue run of Trouble Express. In fact, you can still purchase all the issues from the Radio Comix web site(again, in 2007). No doubt because they never sold and the retailers shipped them back. This series debut was in 1999. Radio Comix have been holding back issues for almost 8 years.


Trouble Express is a comic with manga-style art done by an American writer/artist. Now I want to be clear about my feelings on manga before I go on. I have nothing against the genre. I own the complete series of Battle Royale and I savored every panel. I collected Otomo’s Akira series back in the early 90’s when Marvel’s epic line put it out. Manga can be a valid story-telling graphic medium when it wants to be. Problems for me arise only when the art gets far too cutesy or isn’t drawn very well.


So far, I think Trouble Express falls into both of those categories. Our story follows Markley who has just been hired by a space delivery organization. His odd-couple partner is a 16 year-old girl named Ariel whom he argues with constantly. She’s been cybernetically enhanced to be faster and stronger than a normal human. Their mission this issue is to deliver a rock to a space ship left floating and deserted. About 90% of the art in the book has this flat 2D look to it. Like every character is a standeez that is moved around on flat stage backdrops. 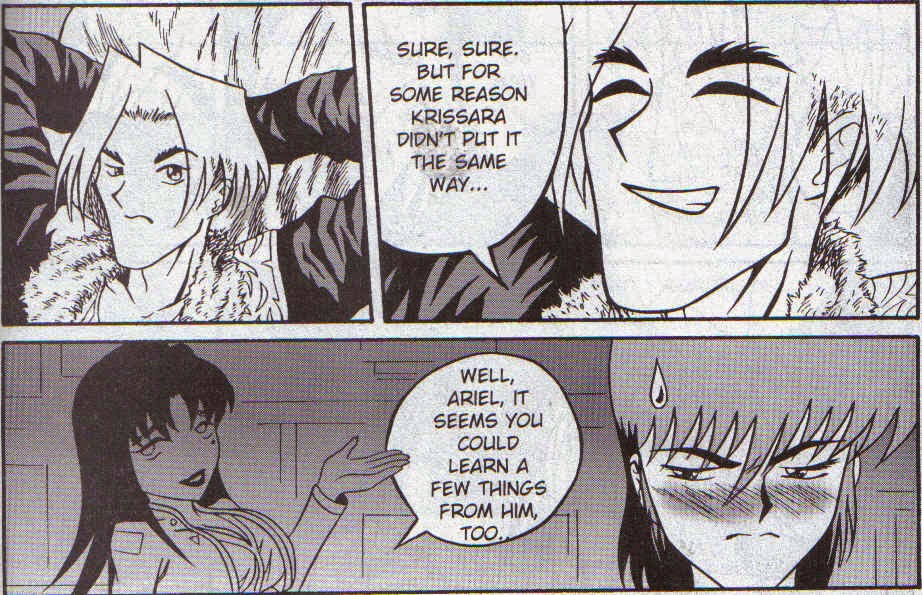 Other things that annoy me about these panels: eyebrows cannot hop off your face and over your hair. Hair is not transparent so you can see through it. When someone is embarrassed or anxious, please use dialogue and facial features to convey this. Don’t paste a tear-shaped sweat drop on the side of their head as a translation device. Take the speed lines issue, for instance. We are given fair warning they are coming. 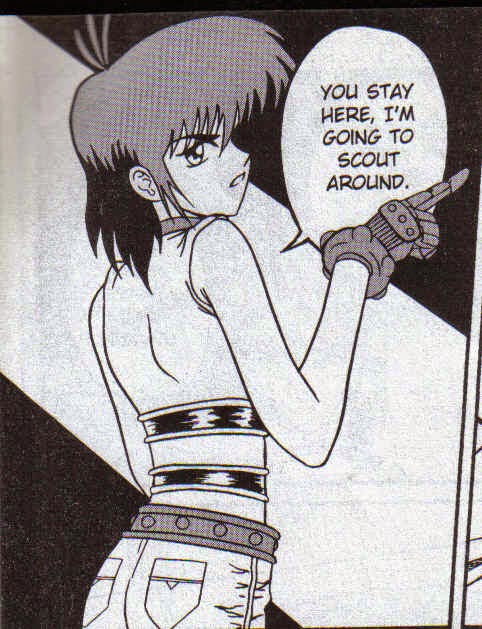 But nothing could prepare us for the level of suck that will be depicted here. Feast your eyes on one page of Ariel running fast to check out the deserted space ship. 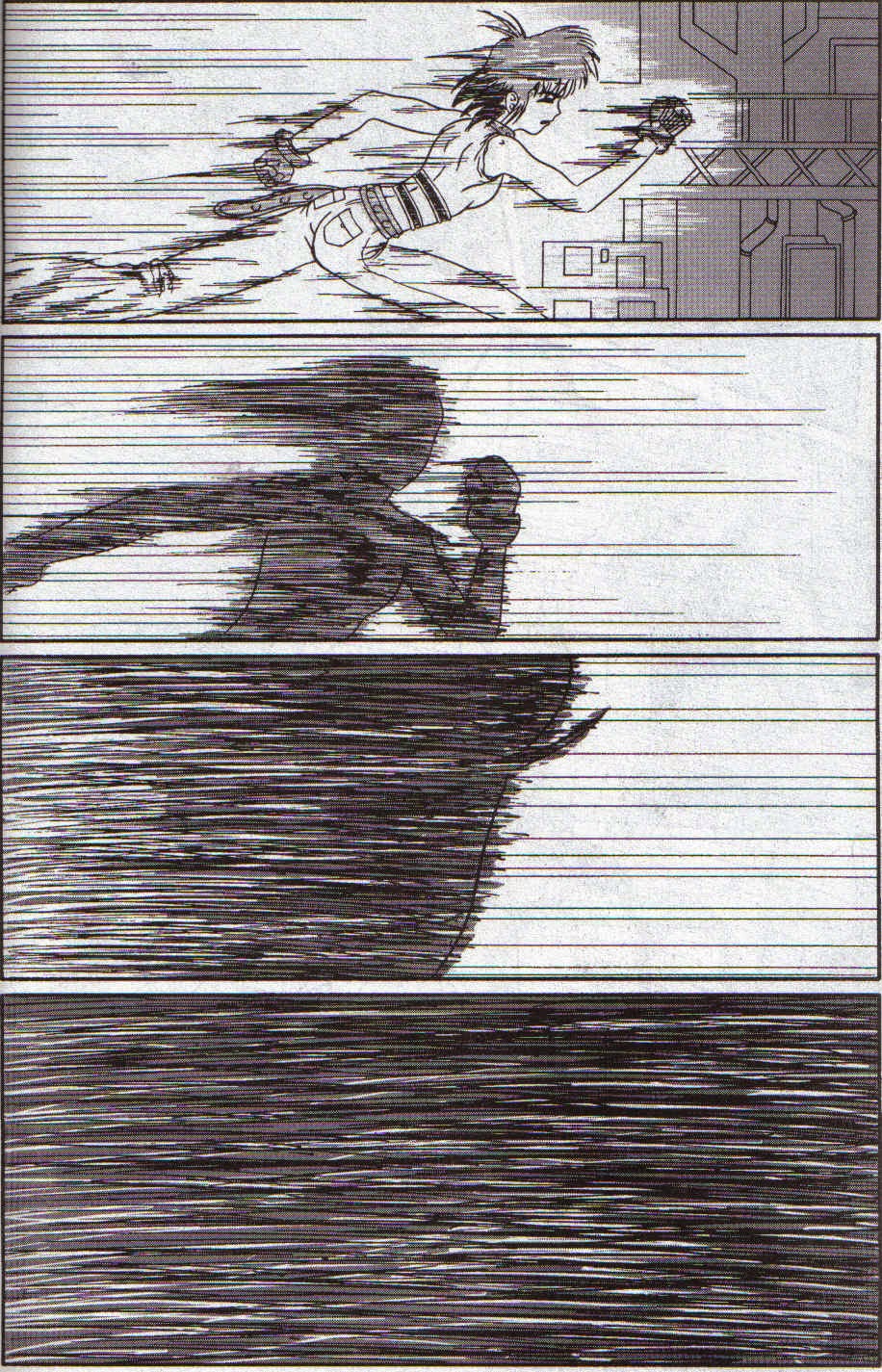 Arrrrgh! Our artist, Will Allison, doesn’t even take the time to draw the character. It’s just panel after panel of lines scribbled in one direction. That’s not style, it’s just laziness. A saving grace is about to occur, but not a permanent one, I’m afraid. 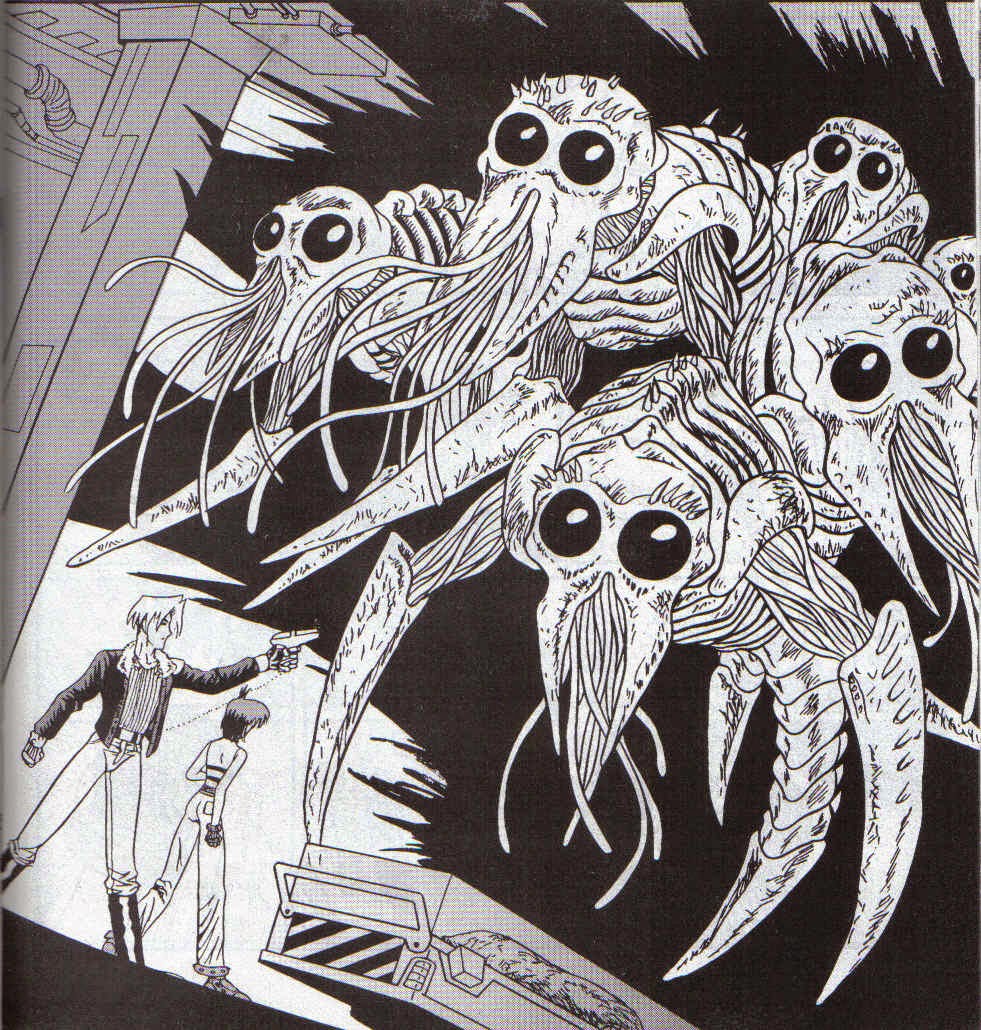 That’s right! Giant Cthulhu aliens arrive and menace our characters. Yeah, it’s not as great as if they killed both of them, ending this issue and my misery, but it’s a step in the right direction. When shooting them doesn’t work, Ariel tries cutting through the bulkhead by swinging a piece of fishing wire or something likely as useless really fast. The sound startles the aliens and they pounce on her. 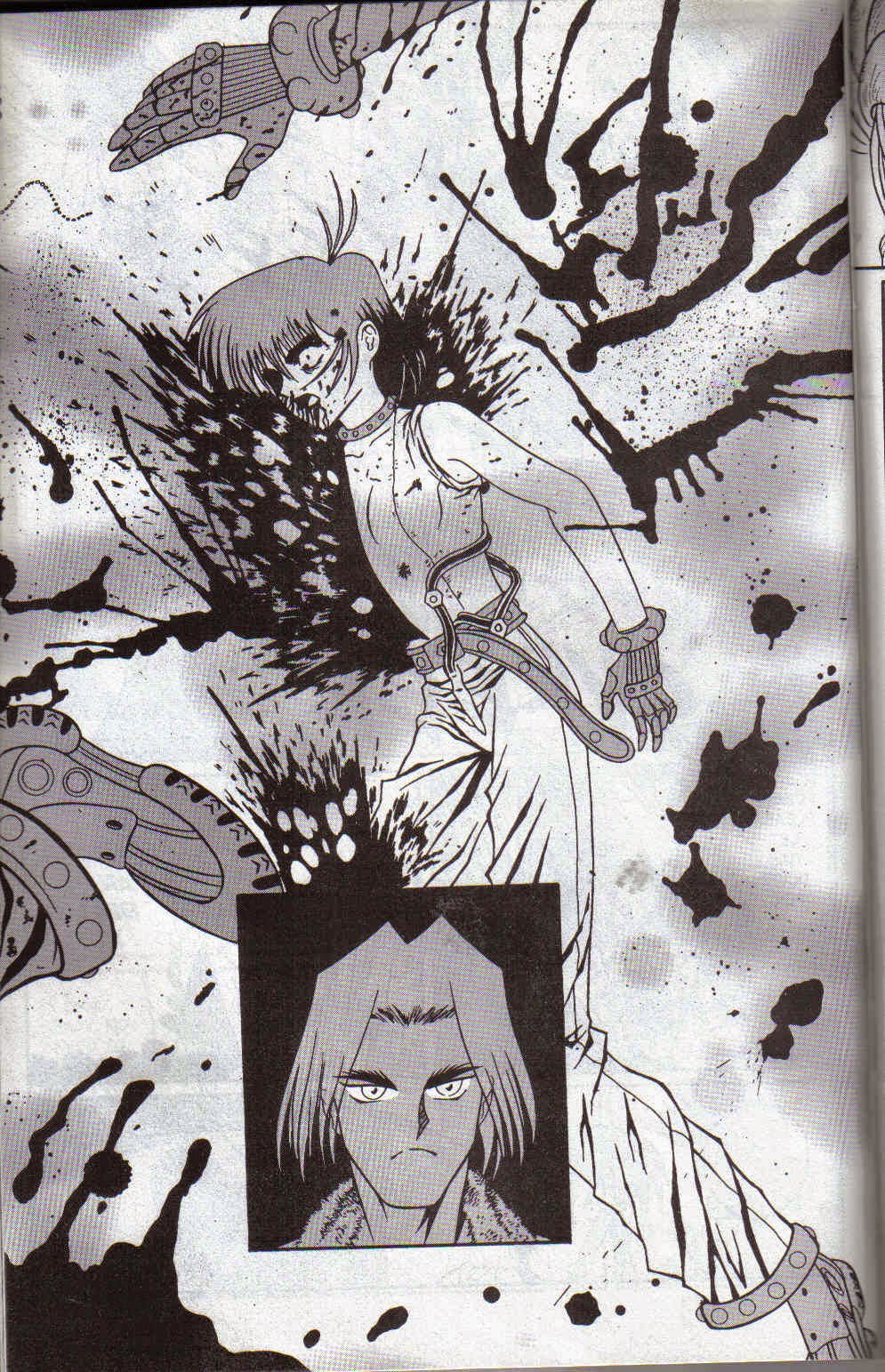 Iä! Iä! Cthulhu fhtagn! Kick-butt! They killed her off. I am so glad. Now if only they’d do in Markley as well, we could have an ending that rivals the American Woman series. Sadly that is not to be. The aliens telepathically communicate with Markley that their intentions are benign and they were frightened by Ariel’s noises. They are the ones that ordered the rock delivered. It’s really an alien egg that pops out a baby ‘thulhu. 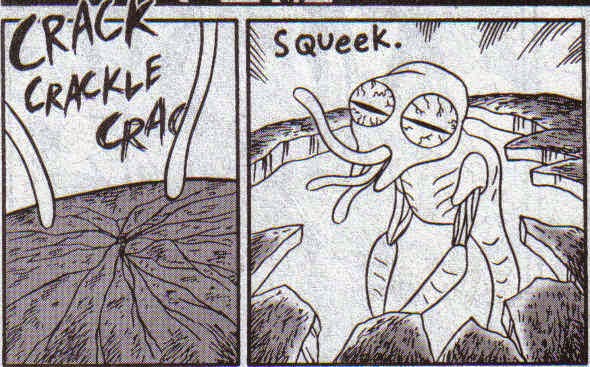 Oh but wait! The retard level increases dramatically after that. Now Markley wants the aliens to fix Ariel. This depresses them so much we have to put the sweat glob on them. I’m not sure which I’m depressed more by: Ariel coming back, the overly cute baby alien or the fact that we just used a goofy “depression teardrop” graphic on a stand in for my favorite Lovecraft beastie. 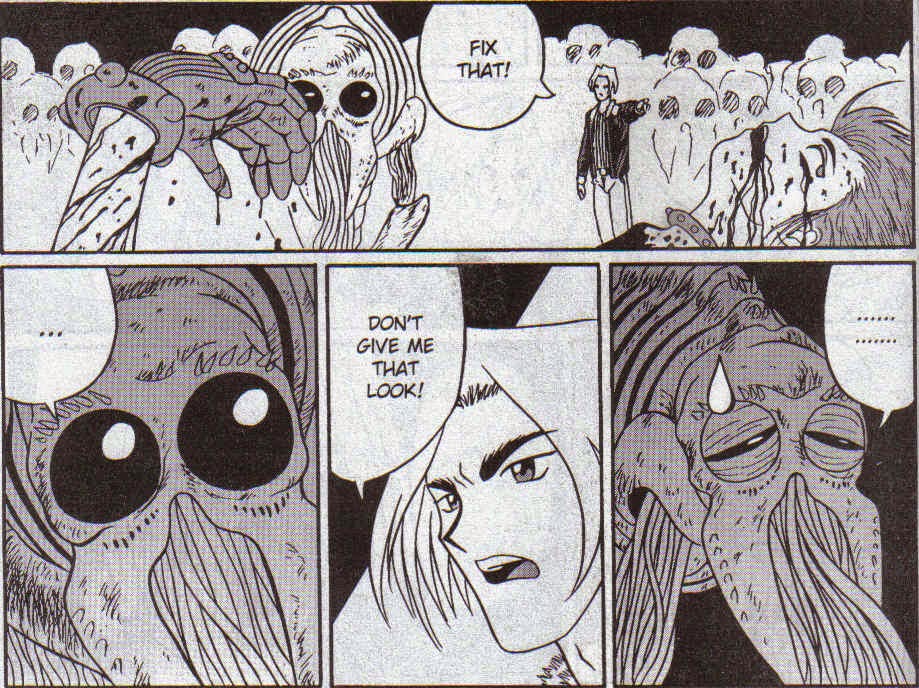 Sadly the aliens resurrect Ariel, she has an emo moment and then Markley and her fly off to their next courier job. My story would have the aliens eating Ariel, driving Markley insane and then laying eggs in his brain. None of it with cute teardrop graphics or baby aliens that squeek. Which story would you rather see?
Posted by SonOfCthulhu at 8:51 PM