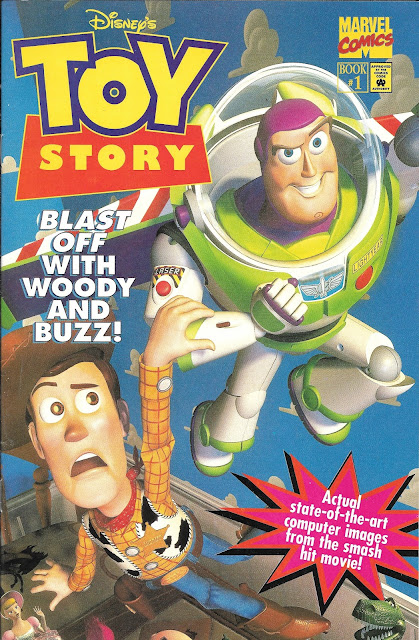 By that I mean that aside from Bob Foster having to cut the movie content down to where it will fit into two issues and poor John Costanza having to letter this 23 page mess, there is little actual work that went into this comic.

Let me spin this back just a bit. When I was a kid, I loved Sci-Fi movies. And I was a Collector. So when Alien came out, I was in HOG-FRICKEN HEAVEN with the number of books that were out about Alien. I got the movie program, Walt Simonson’s Alien: The Illustrated Story, Alan Dean Foster’s Alien novelization… 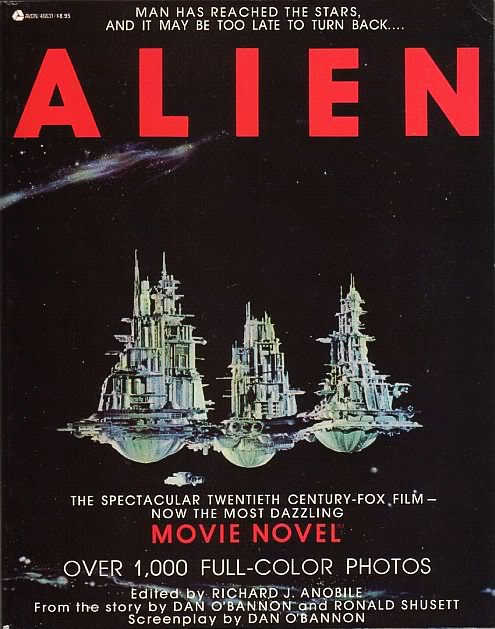 …and the Alien Photonovel, edited by Richard J. Anobile (Avon 1979)

The book was MASSIVE, containing stills from the movie and clocking in at 192 pages. I loved that book, as it took apart each scene bit-by-bit in photos that occasionally captured images too fast for your eye to focus on. It was illuminating in its completeness. 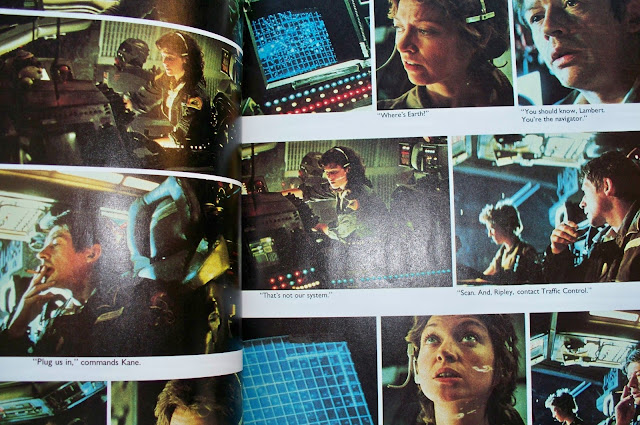 It helped a bunch that I consider Alien one of the few perfect “10” movies out there. Everything about it, from the performances, the special effects, the script, the directing, the editing, and the score…it all WORKS in a way that few movies do. I can still remember many an afternoon spent with my LP of the Alien Soundtrack playing while I was laying on the floor with my headphones on reading the photonovel.

When I saw the Star Trek: The Motion Picture – The Photostory book, I snatched that one up as well. 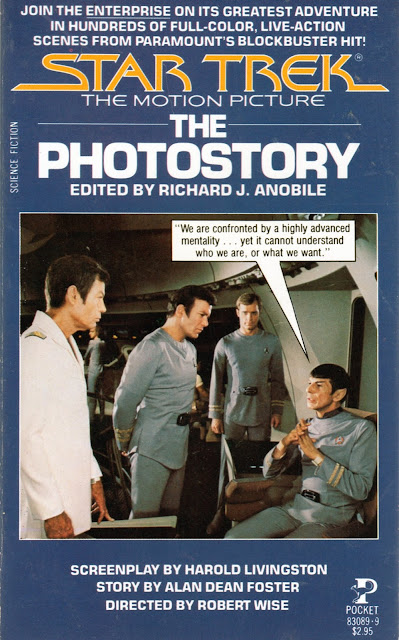 However, I found it to be a diminishing return. The movie was essentially a TV episode writ large, and even though the effects shots as the Enterprise travels through V’GER’s guts were rendered with careful detail, the book was as sterile as the movie when it came to conveying emotions and this suffered greatly. I would still peruse it for the visual appeal some of the effects shots conveyed.

So picking up the two-part Toy Story books seemed like a sure thing. Here again was a movie I felt was a perfect “10” in photostory form. This should have been a book that had me laying on my belly while singing “You’ve Got A Friend In Me” and relishing in the nostalgia factor.

Something about the book is off-putting, and I’m trying very hard to put my finger on exactly what it is. Perhaps it is that a majority of the Toy Story performances rely on the strength of the voice actors and not on the Pixar visual effects. Or more importantly, the nuances of those performances isn’t captured in any particular still from the film, but only when the digital animation is in motion. 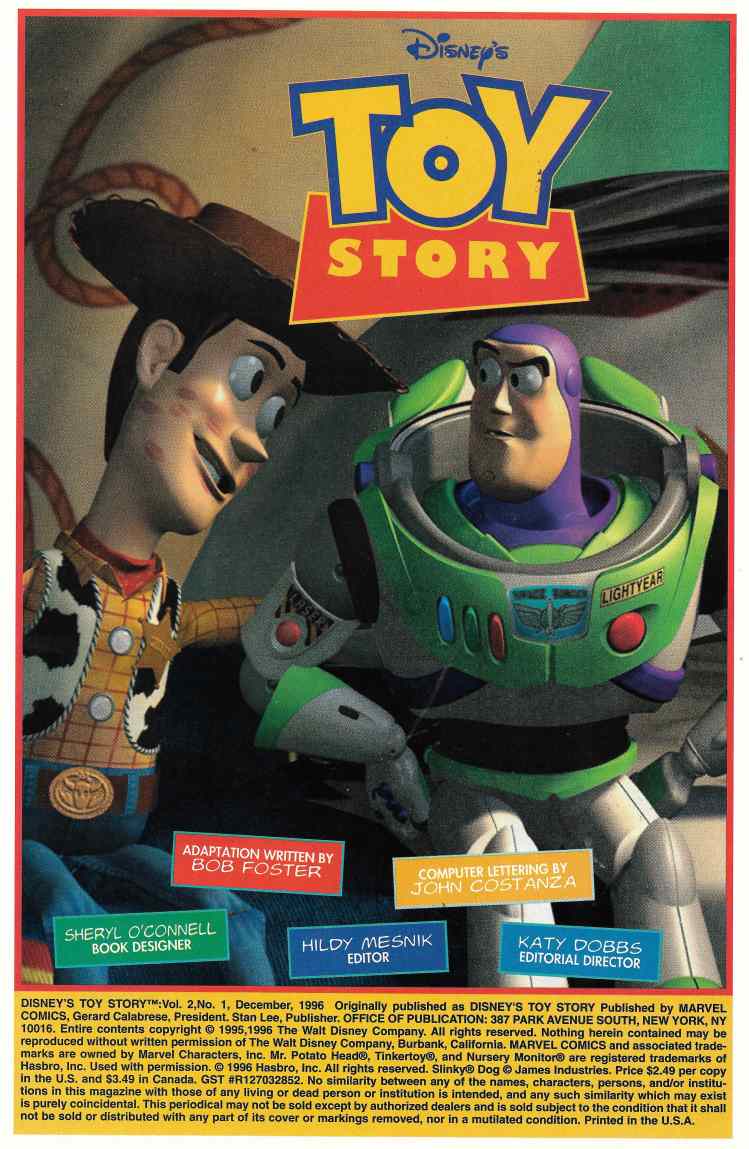 Now, ignoring the HUGE disclaimer at the bottom that I included so you could see Marvel protecting the trademarks of every toy in the movie, look at the expressions of the two characters. I know this is the end of the first movie and what is happening in that scene. But if I didn’t…this looks like Woody just made an unwanted sexual advance on Buzz.

The longer I look at it, the more the various elements of the characters faces look like separate layers, unattached in any way. Buzz’s and Woody’s eyes appear to float over their faces instead of being a part of them. The odd contours around the noses and mouth of each form a weird gash like quality that is disquieting. If the story of these two toys is supposed to humanize them, the images this book conjures up does exactly the opposite.

And yeah, maybe part of that is this was Pixar's first real outing and it lacked much of the upgrades computer animation would receive in the years that followed. But still it shouldn't be this bad.

It doesn’t help that the movie opening of Andy playing with Woody and friends is rendered here in VERY condensed form (another weak point for me) but that they also appear frozen in place and unmoving. There is no emotion in this entire page, because it was all generated by the moving animation created by Andy’s play. It feels static and weirdly voyeuristic. 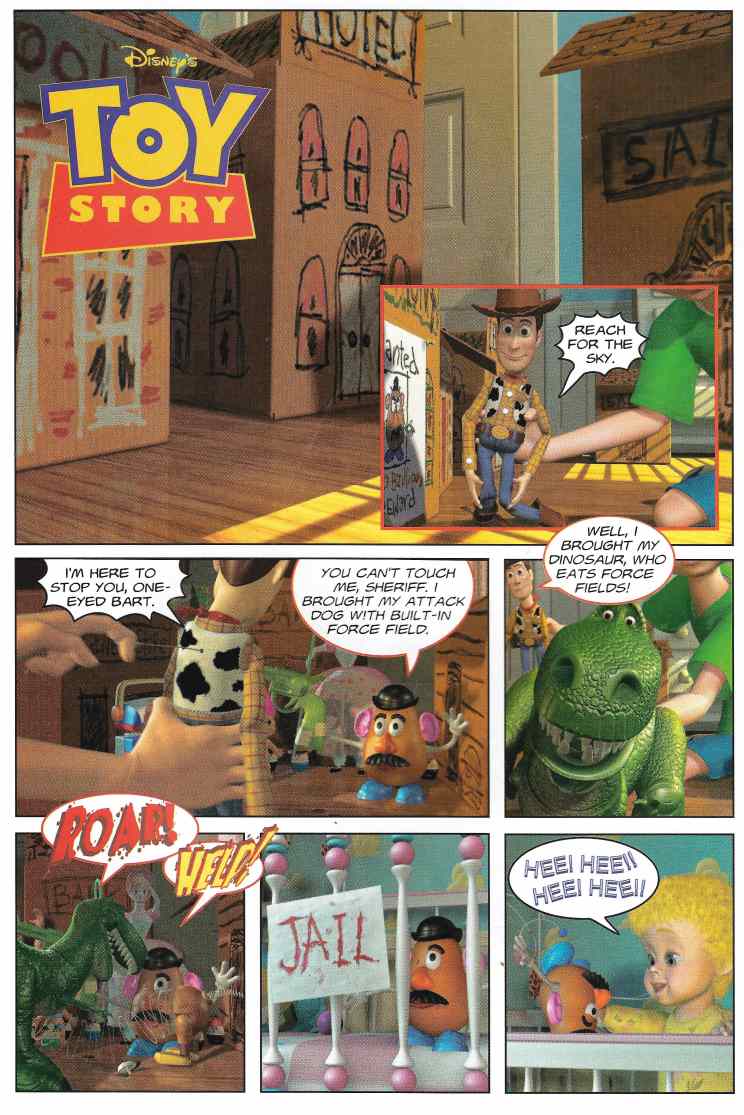 To their credit Foster and especially John Costanza on letters, do what they can to liven things up, but even different font faces and Wordart effects can’t make-up for the empty, soulless graphics we are forced to endure.

Even as the toys get up after Andy leaves the room, we don’t see them in as alive in a natural way. They just morph into several awkward poses. It proves how much the animation MATTERED to the flow of the story. The book works best when it allows only eight or less shots per page and even then, given the speed at which the action is shot it is prone to motion blur in the screen captures. 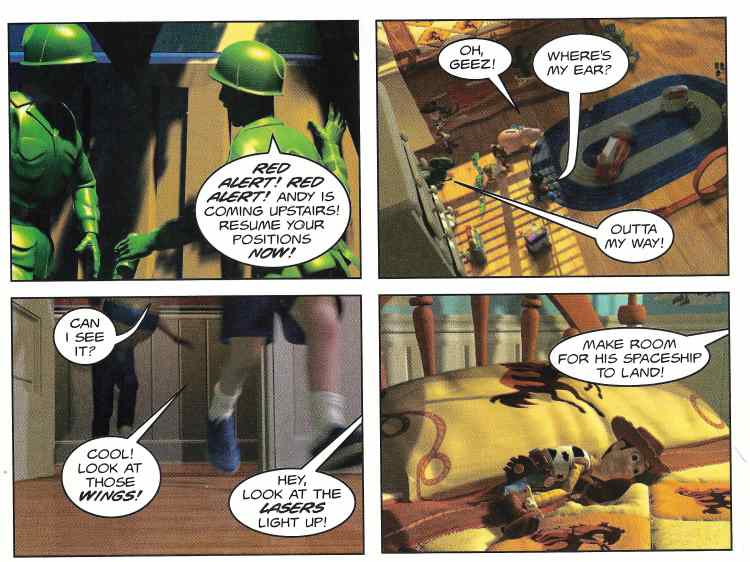 We get the iconic “Woody looking through Buzz’s legs” scene in one of these shots and it hits me how small it all seems. How the import of the book is muted completely by the two-issue format and the act of cramming everything it can in. None of the still moments are given time to breath. That slow pan up Buzz’s legs doesn’t happen, we are whisked off to Buzz’s next line.

This book fails for me. It might be enjoyable to a kid or a Toy Story completist, but as someone who loves the story it is attempting to tell, the comic is running roughshod over the story elements to meet a page count deadline.

Take the iconic “He doesn’t fly bit.” It is introduced well… 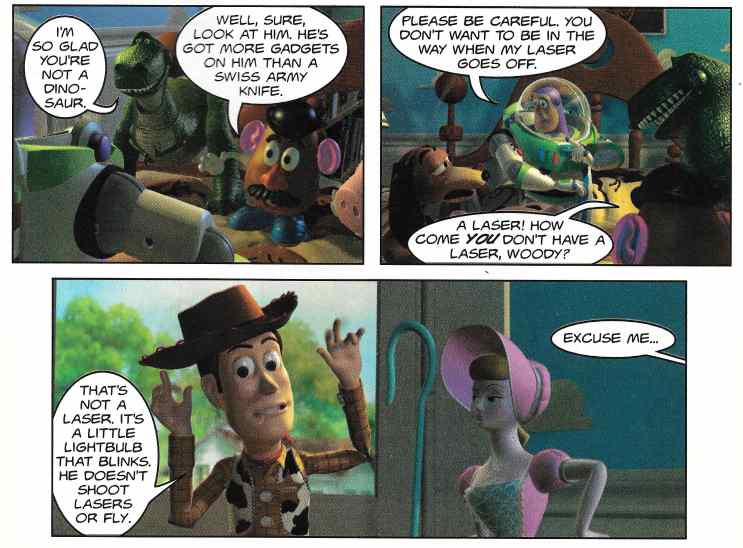 …but as I turn the page hoping for a huge shot of Buzz with lighted wings extended…you know, something WORTHY of that type of intro…I am crestfallen to discover that the falling with style sequence is carved up into nine panels in a page containing ELEVEN. Every panel looks like a postage stamp. It robs the book of any impact. 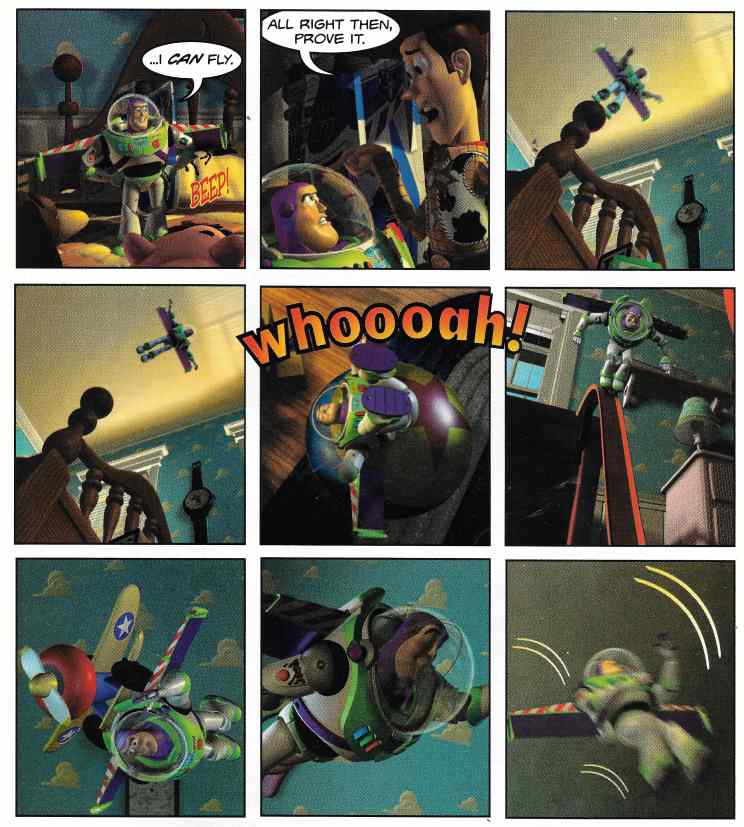 I have to give credit to John Costanza for lettering his heart out on this one. And I’m certain that Foster’s adaptation would have worked so much better if the title had been given four or six issues instead of two. They gave the original Star Wars six issues.

I don’t feel like padding the rest of the review with my complaints. For those curious about what the first issue covers, there is the Pizza Planet trip that becomes the focus four panels after the falling sequence. Those panels introduce Sid and Scud (in a single frame) and then the book finally gives Woody a moment. 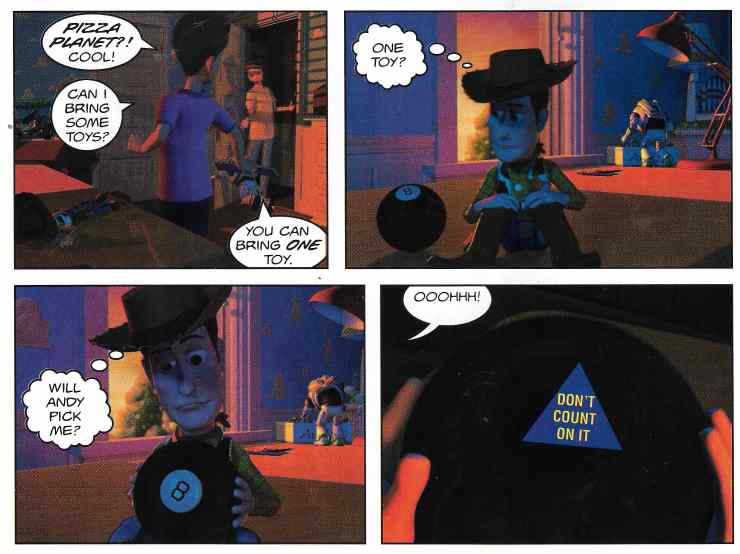 I can think of several scenes clipped or cut before this happens, including the VERY important one where Buzz shows everyone that Andy wrote his name on his foot. And as sadden as I am that Foster had to close this overstuffed suitcase by cutting off any clothing items that stuck out the side, I do like the above inclusion. If only the rest of the book had slowed down to this speed and let the characters breathe like those four shots with Woody and the Magic 8 Ball.

But the book can’t keep that pacing, so we are quickly back into shoving 5 minutes of action and dialogue into Eleven panels of tiny cutscenes. 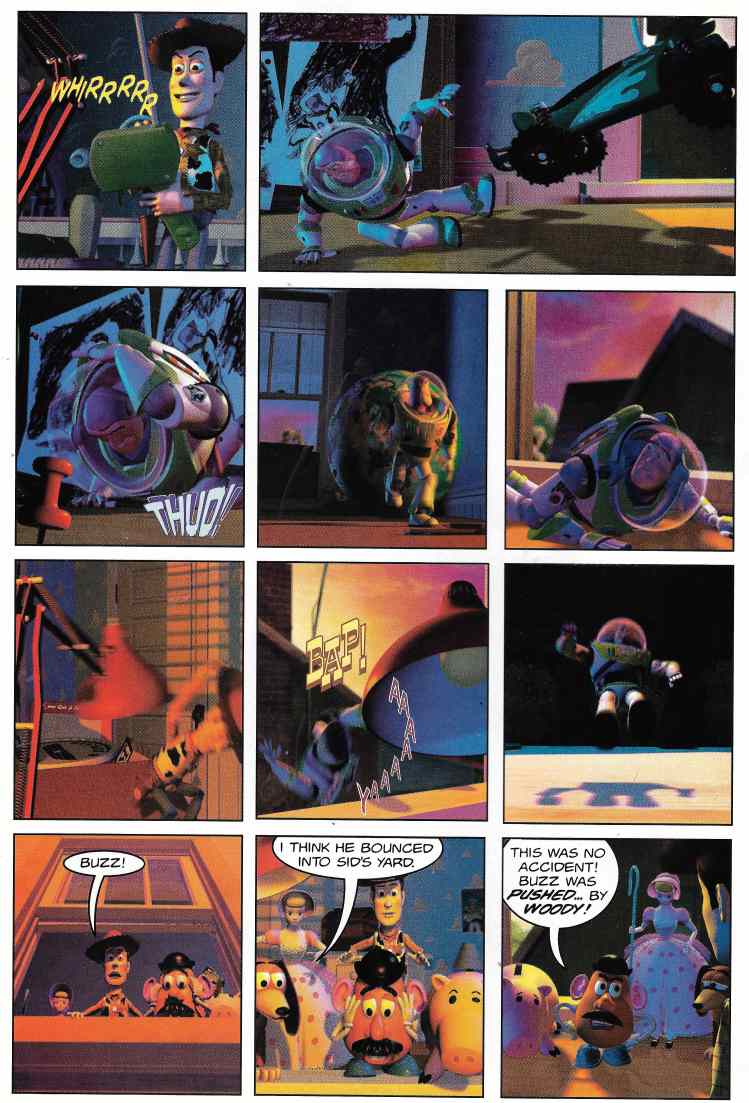 It’s here where the photostory medium fails completely. Given enough page count and big, BIG frames, this type of storytelling works. I can’t tell you how many moments I would savor as I thumbed through that Alien book and get sucked in for another complete read through. It CAN work, but not like this. Investing on this scale just creates a a series of out-of-focus, tiny panels that fail to gel into a story.

There are few sequences that work here. Remember how funny Woody and Buzz fighting after they fall out of the car at the gas station turned out to be? Well, all that entertainment gets clipped. 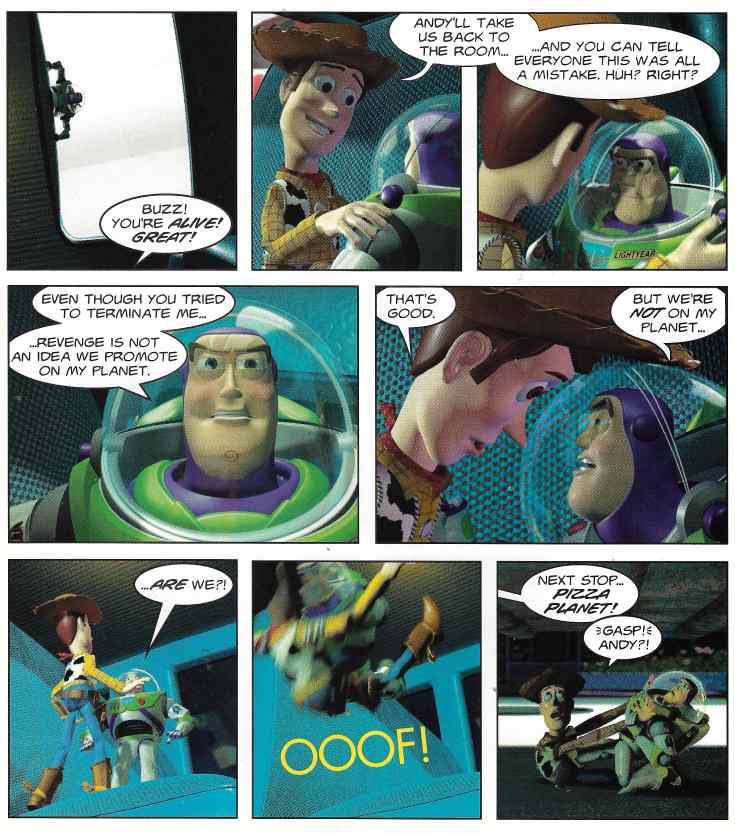 And even when the book does get a sequence right, like the claw game intro to the alien squeaky toys… 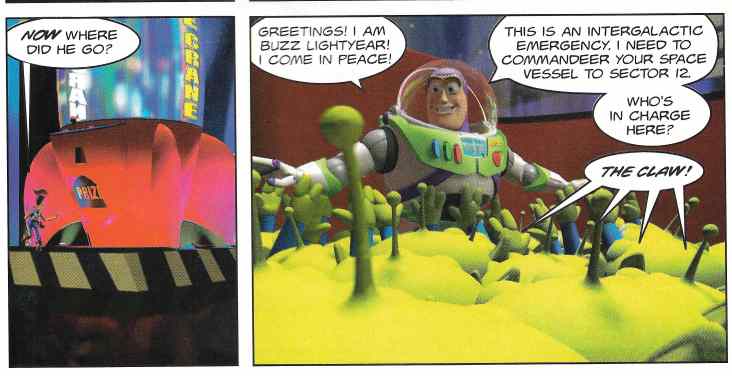 …it takes a page turn to show the goofy alien faces that make the joke special. 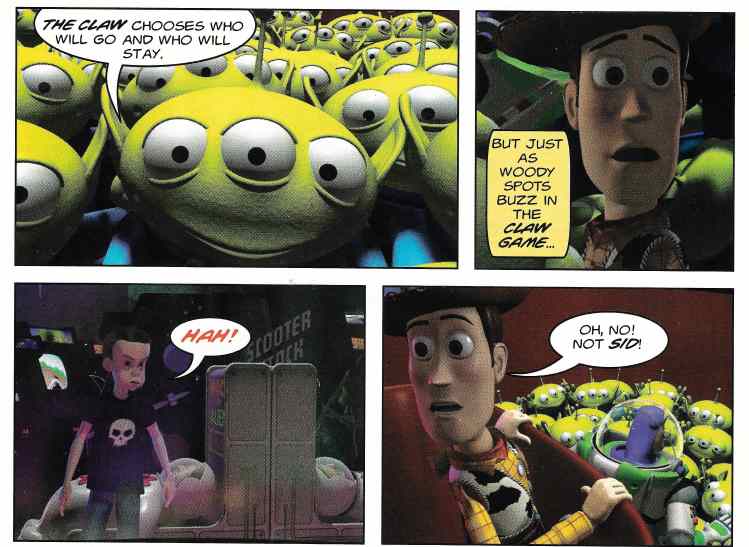 The Sid section works too… 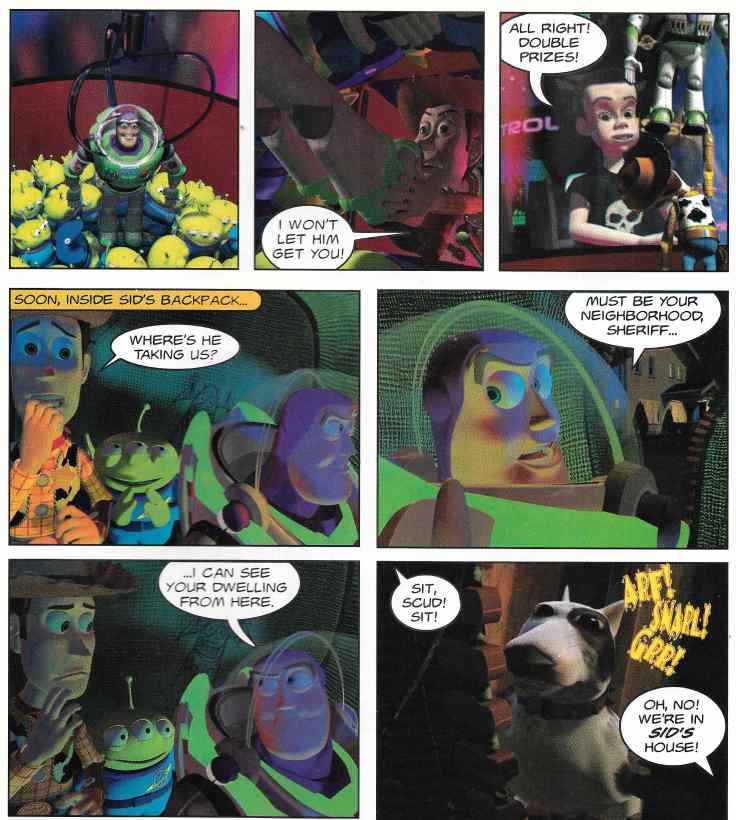 …including the bit with his sister. 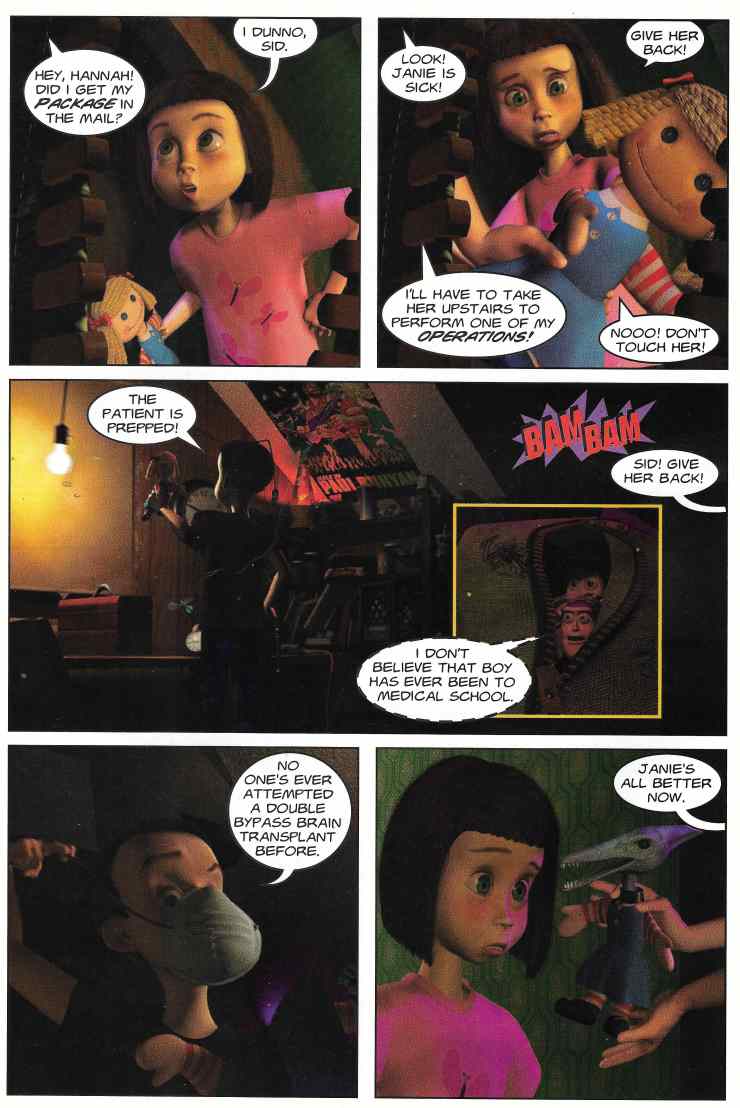 But for every part that feels true to the movie, I can’t help but turn my mind back to wondering how GOOD it would have been to allow a Marvel artist to draw this story out instead of making it snaps from the movie. And I come up with the book would have been a million times better, more inventive and might have fit better into the two issue format. 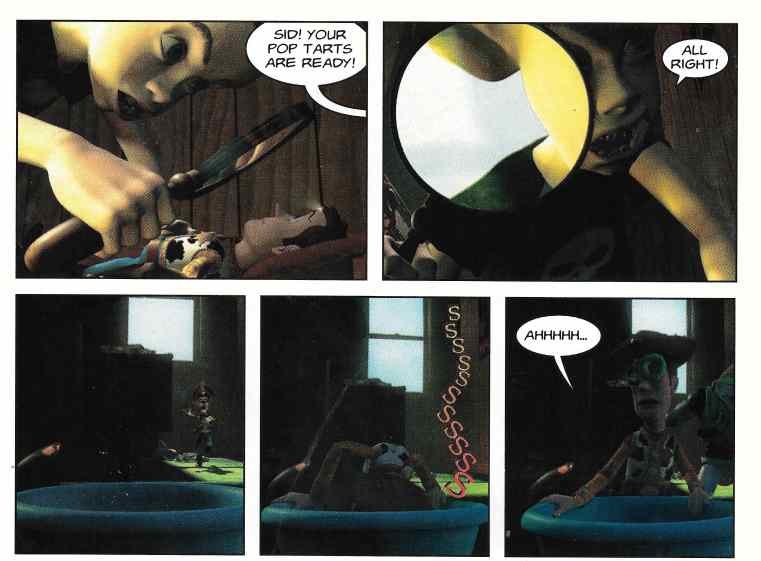 And that wraps up May, sad as it is to say. So many tie-ins left...untied? Well, that will have to be a mission for a future Crapbox month. For us, we have to battle on and by that I mean we have to head into June, where theme month continues with superhero vs. superhero! (and SoC vs a horrible-terrible work schedule that barely allows him time to post anymore)
Posted by SonOfCthulhu at 9:43 AM