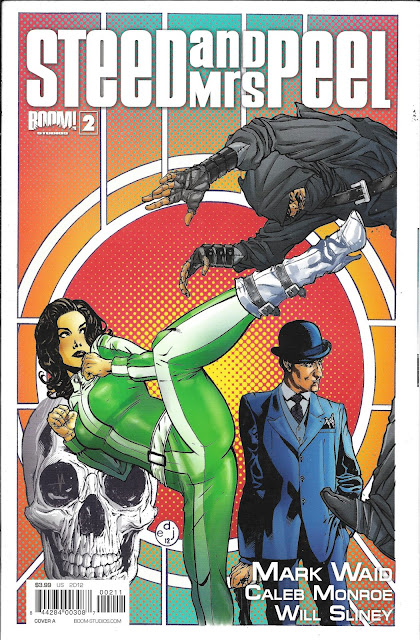 The AVENGERS!
Just, you know…not the ones you were expecting

They were there first, appearing on TV in the year 1961 which was a full two years before Marvel’s more colorful (or colourful, as you like) team of do-gooders made an appearance on paper. As history is the judge of things, however, the pairing of British secret agent John Steed with a succession of assistants was not destined to keep the name The Avengers. They lost out to Marvel. Even though Steeds television exploits lasted for eight years and spawned a big budget movie in 1998. 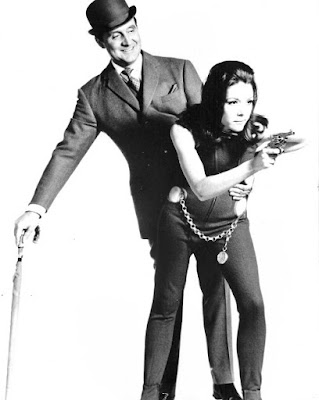 I encountered them the way most of my generation did, in syndication on early morning rotations during summers spent at home. I remember the show being flashy and confusing, the camp factor amped way up. For a long time I attributed all of it to the fact the show was British not so much that it played a bit like an adult Batman show. That quintessential English gentleman Patrick Macnee’s Steed carryed the thing off with his natural charisma and a wink in his eye. Of course, pairing I most remember was Diana Rigg as Emma Peel, the second woman Steed was partnered with and unarguably his most famous. 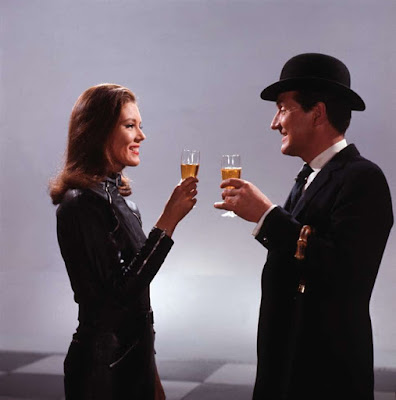 I don’t believe it is simple nostalgia that makes me long for a rewatch of The Avengers or any of the other far-out British programs I grew up with. Shows like The Prisoner, U.F.O. and Space:1999 will always have a strange attraction for me due to their penchant for the bizarre. Certainly, they extruded a panche unlike any of their American counter-parts.

Here they also took the action in a tongue-in-cheek style. The refresher HERE from Must See TV-The Avengers goes so far as to state that it appears that if someone were shot, because there was no blood, the audience would just assume that they got up after the scene and went on their way. Thus absent a true “vicious” instinct, these shows were more light-hearted fantasy and incorporated a much looser, elegant reality

They even beat their contemporary name-stealers in the comics to the big screen, when Ralph Fiennes and Uma Thurman stepped into the roles of Steed and Peel in 1998 in a romp that had them facing off against a playing-against-type villainous Sean Connery, Eddy Izzard, and a bevvy or special effects. I remember very little about this movie.

Perhaps it BEARS a second viewing…

So that was a flop, which is a shame as the succeeding generations will likely miss out on the greatness that was The Avengers and MacNee’s brilliant performance as a result. Anything that could draw attention back to the original series is a boon.

And thus we come to this series by Boom Studios titled “Steed and Mrs. Peel”. I find it a shame that they can’t use the original title, but we live in a litigious society now that also assumes people are moronic half-wits unable to tell two books with the same title apart. Enough about that, though. The real question we should be concerned about is whether or not this book portrays an accurate representation of the television Avengers or if it needs to be disposed of like that awful big-screen adaptation above.

Let’s have a look, shall we?

We begin with Steed and Peel walking through a bomb-blasted ruin, while carrying a picnic basket. Steed appears to be using a dowsing rod to detect…something. They both look impeccably dressed, Steed in his old English gentleman three-piece suit and Peel in a sleeveless halter top and hip hugging jeans. So far the style is right on for what the TV show would throw at us: a juxtaposition of elements both new and old in a setting where you would likely not find any of these items. But how is the dialogue? 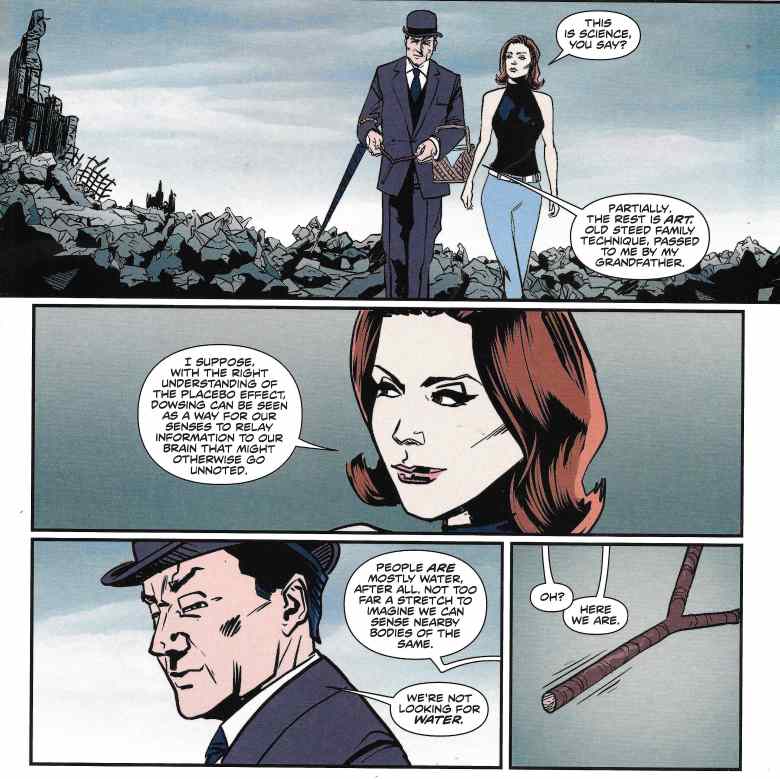 It’s pretty much spot-on, thanks to Waid and Monroe. And this next sequence, where Steed clears away rubble to find… 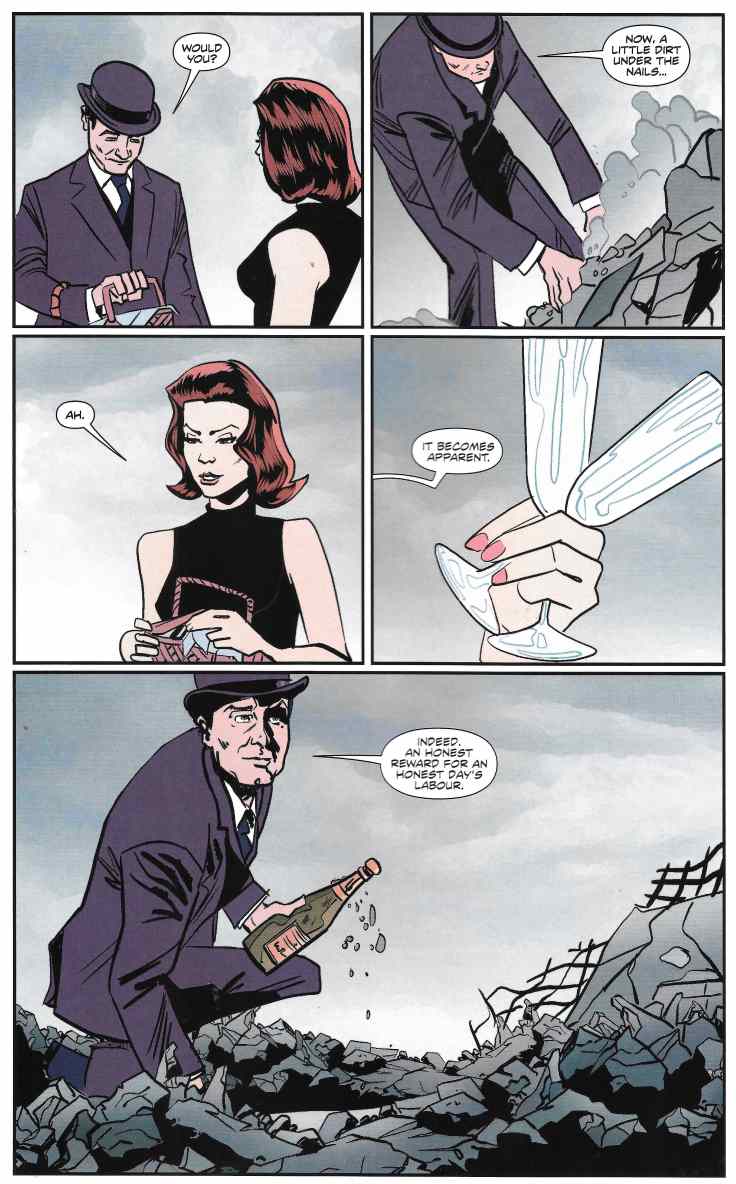 …a bottle of champagne is so reminiscent of the TV series opening that I have to applaud the book immediately. I settle in at this point, as it appears they are going to get the tone of things right. 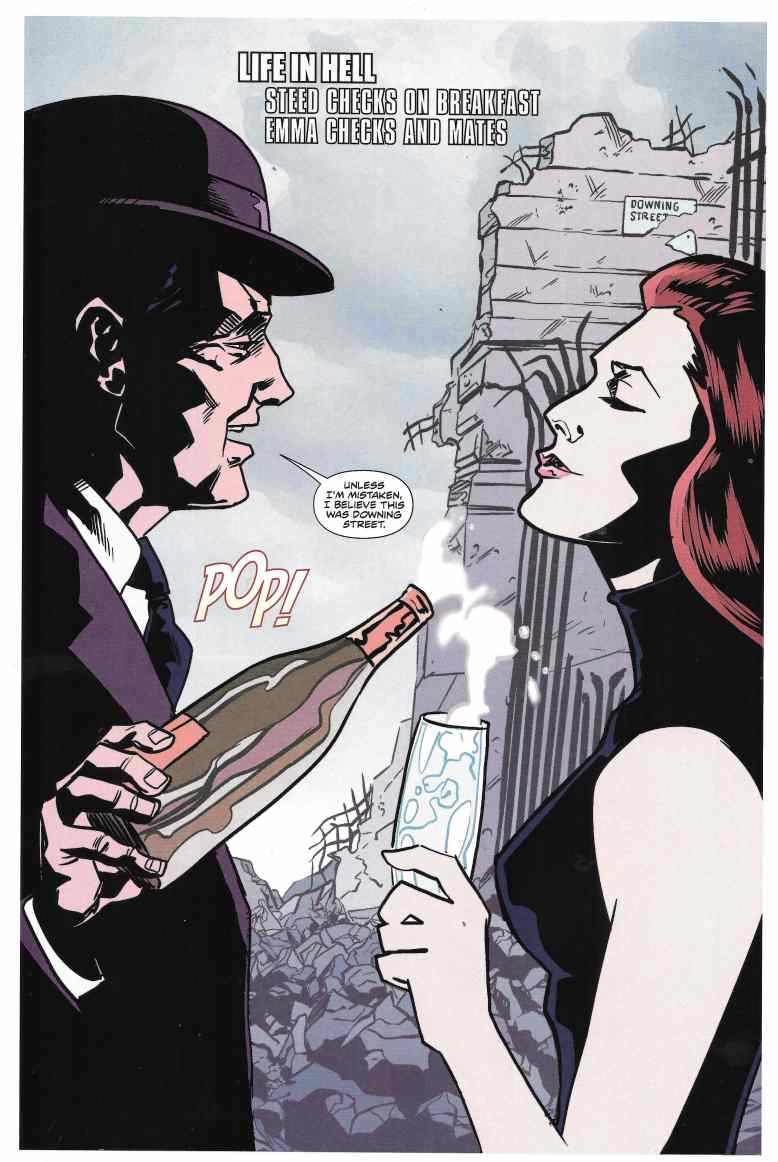 As Steed pours, we learn that this is the middle of London and not some out of the way industrial ruin, so I’ve missed a bunch by stepping into issue number 2. Don’t fault me please, but I didn’t see the last issue blurb on the credit page until after I’d read the story through once. It explains where we are and how we got here:

John and Emma were investigating an agent’s death when London apparently suffered a horrific nuclear assault, leaving both the agents in a bombed out London where the only people prepared were the agents of the villainous Hellfire Club (not the one from X-Men, fellow Marvelites. They did that name first as well.) and several high-ranking British military and government types.

And the Hellfire Club’s entrance is right below Downing Street… 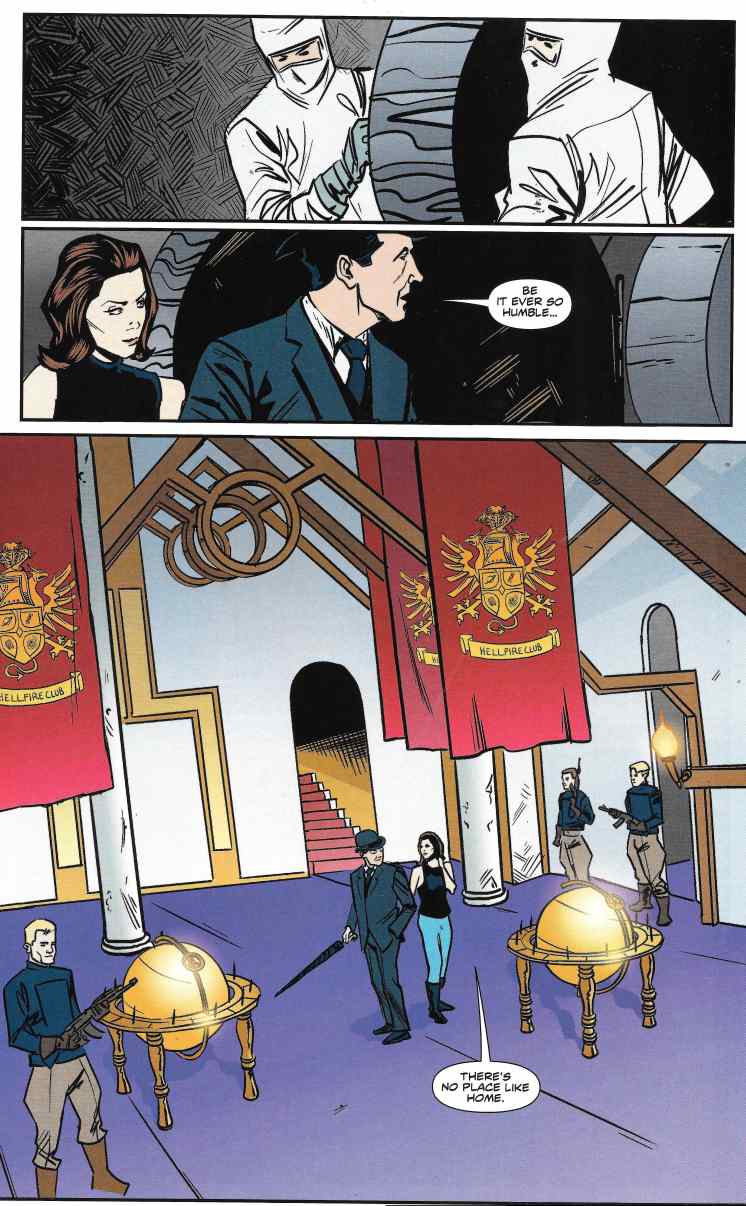 I love that it takes six pages for us to get here. The book’s unhurried pace creates the same tonal vibe that the show had. Sure, these two would save the day and the world, but there was no reason to rush in and gun everyone down like an American secret agent would. No, this is all about unraveling a mystery in a very British way, with manners and taste.

And here that mystery is how did the Hellfire Club know to prepare for just the sort of barrage that devastated London. The pair split up to find some answers. 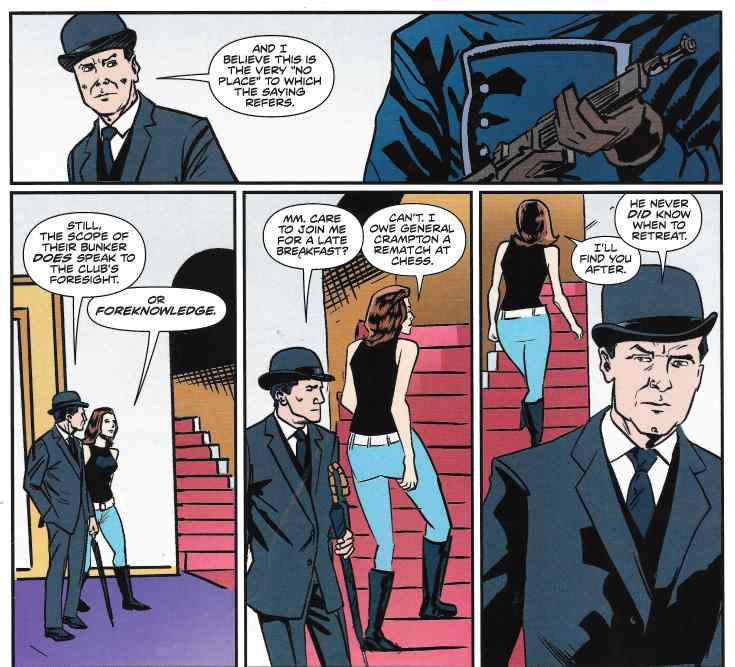 Steed takes a meager breakfast with the prime minister and another government functionary. They discuss trying to find out more info on how widespread doomsday was. 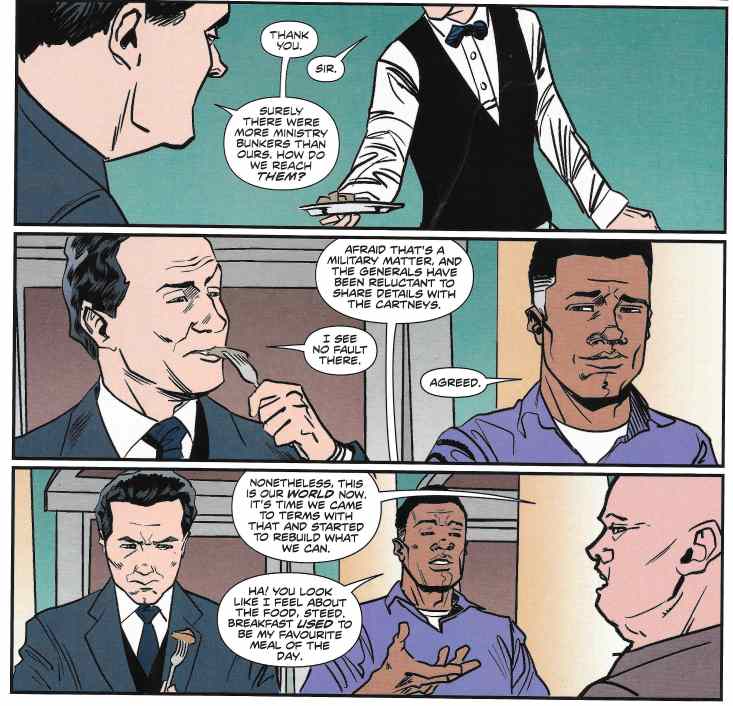 Then a curious admission by the man to Steed’s left and a reappearance by Mrs. Peel, who can’t seem to find the General AND appears to remember that breakfast meal pairing. 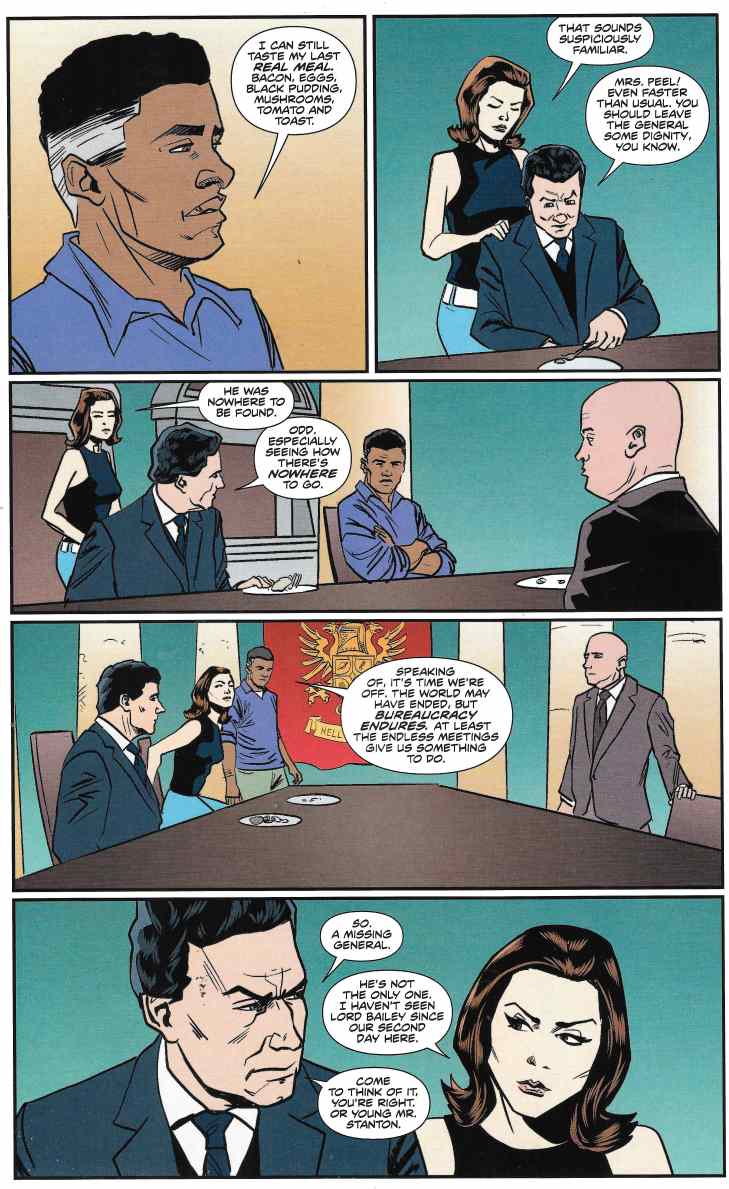 As to the General being gone, it is a fact made all the more suspicious given that there aren’t any places for a person to go outside of the Hellfire Club. It’s an odd occurrence that puts to mind that the general isn’t the only one missing.

The art in most of this is fine, overly simplified and reliant on the viewer’s eye to “fill in the gaps.” For the fist time in any of the pictures I get a dose of what looks like Carmine Infantino’s

But back to the story as one of the Hellfire Club leaders, a woman whose name I didn’t catch brainwashes the General in question in a darkened room using a white screen. After he is convinced to do anything to stop Armageddon, she douses him with knockout from an aerosol spray can the likes of which I haven’t seen since that Jurassic Park book. 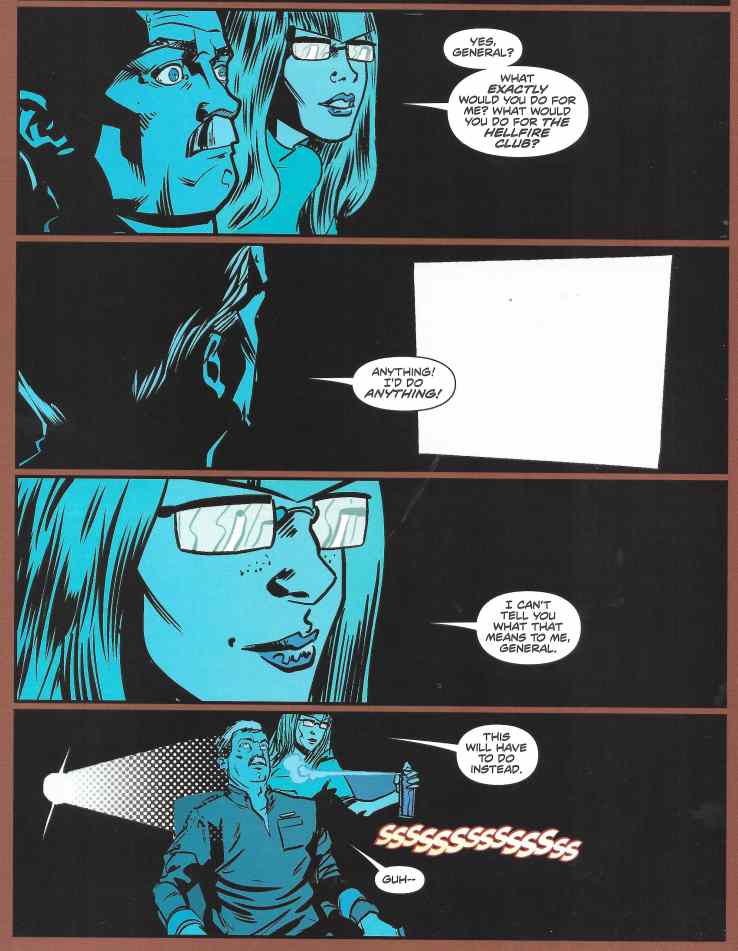 As the general is dragged out, we learn the woman has a male counterpart in this operation who hasn’t been as successful, and that they have plans for Steed and Peel. As the scene ends, she tells the chap that she’ll be the on to take “Father’s Revenge” which means that the Hellfire Club is in league with the higher-up foil of Mother. Mother was the director of the secret agency Steed worked for in the final season of The Avengers and appears in the big screen adaption. Father in both appearances was up to no good. 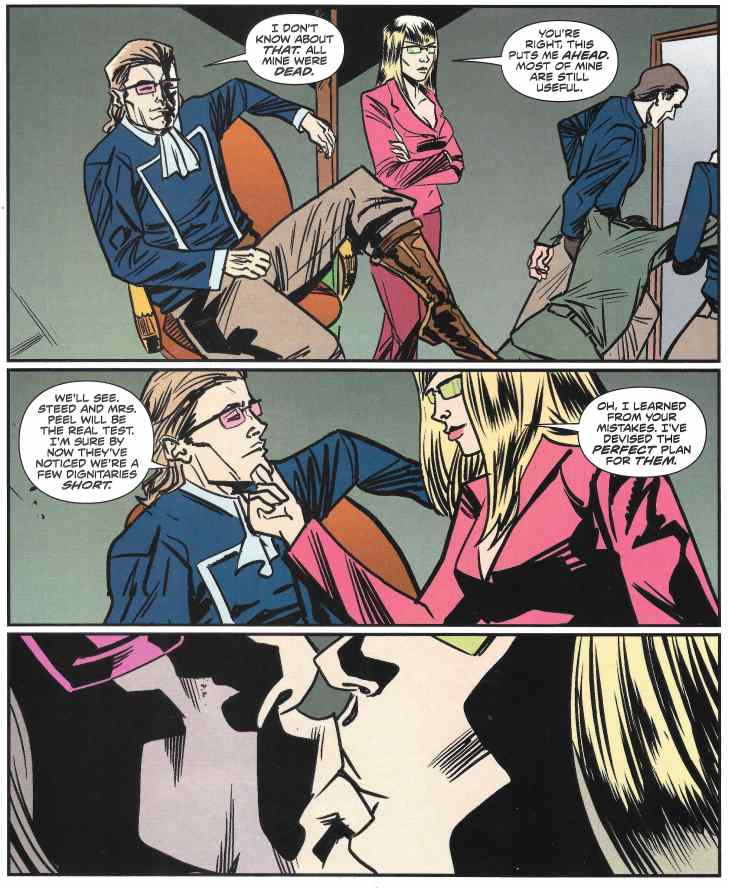 Our little miss also speaks to the white screen, calling it Dirgent while pleading it for patience, telling it not to worry.

All these odd goings-on and set pieces feel like a direct lift from the TV show and again I have to give our writers credit. Along with this next bit where a chess match between Emma and Steed… …is more than it appears on the surface and it ends most satisfactorily. 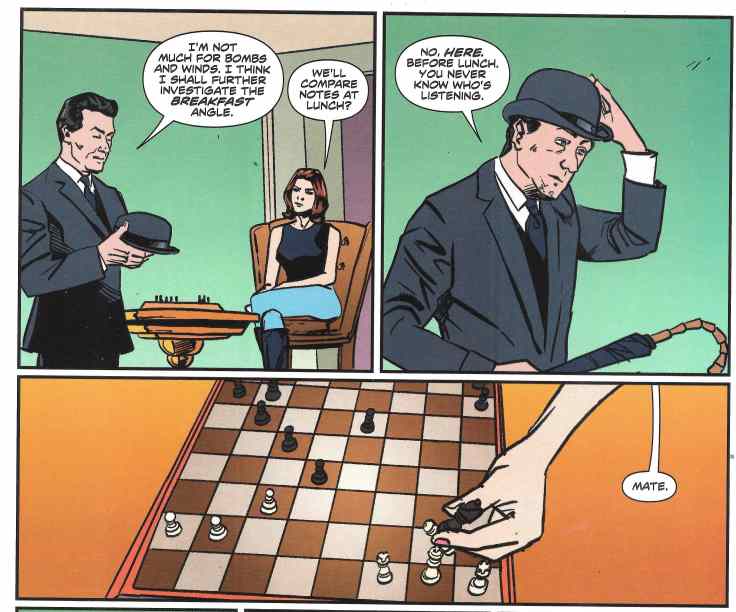 Always love to see Peel get the upper hand on Steed. The pair could always generate on-screen sexual tension without either of the saying or doing ANYTHING overt. It’s a shame there weren’t more seasons of them together.

Emma finds that the General went off with Joan Cartney (and our mysterious brainwasher gets a name), so she confronts her in her office. It begins cordially… 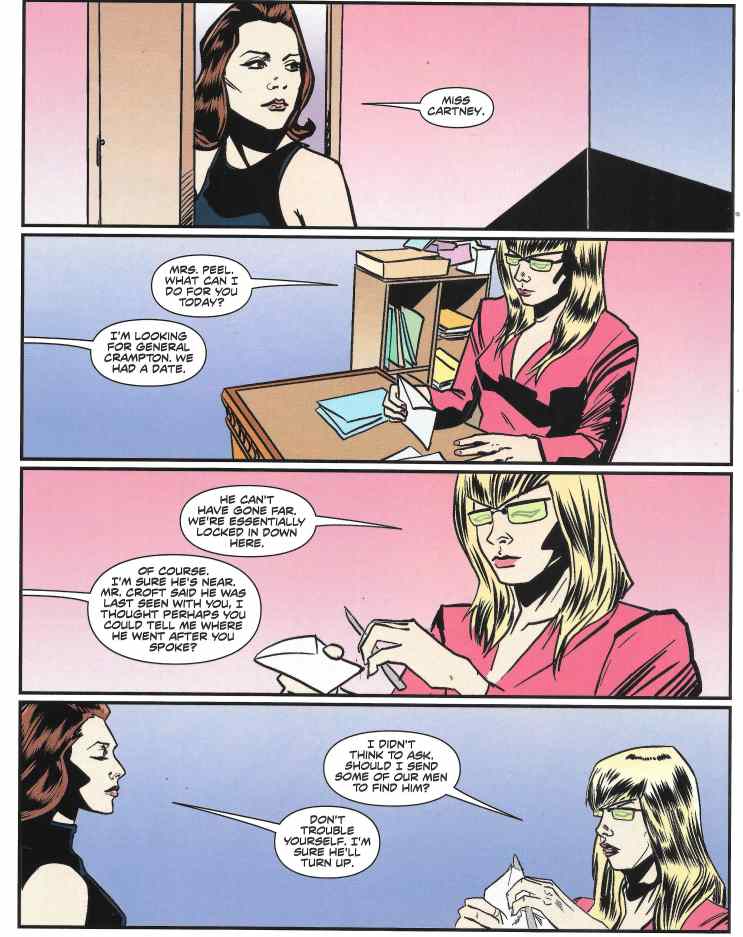 …but turns into a page-long catfight with Emma gassed and dragged away, possibly for some mild brainwashing? 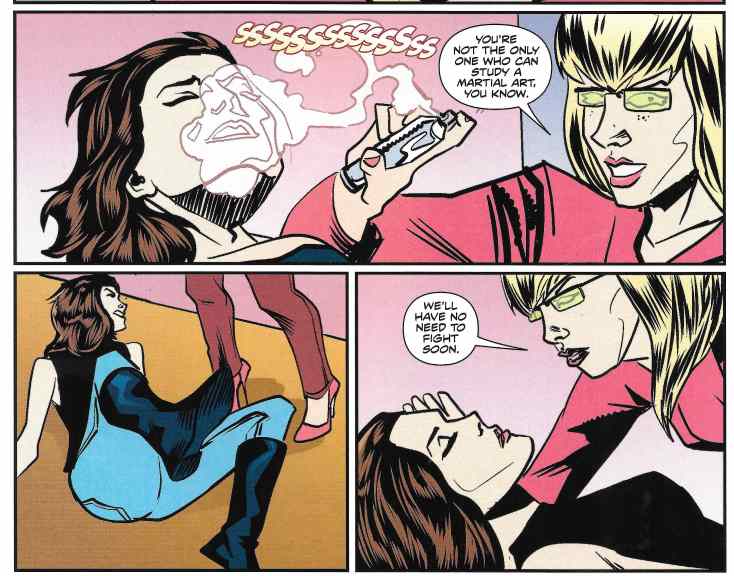 Steed has busied himself with finding out why everyone appears to have had the exact same breakfast at the exact same time, when two Hellfire Club guards escort one of the men off right in front of him. 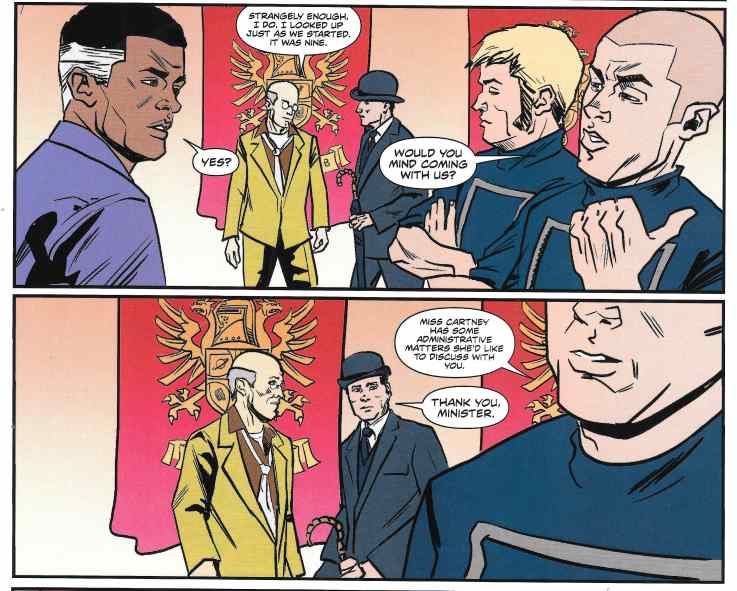 He eavesdrops on Cartney working her magic on the gentleman by weaving in a narrative of a preventable apocalypse and what would he do to stop it. It’s easy to see how this mind control mixes with the devastated London above, that must be some kind of faked prop. 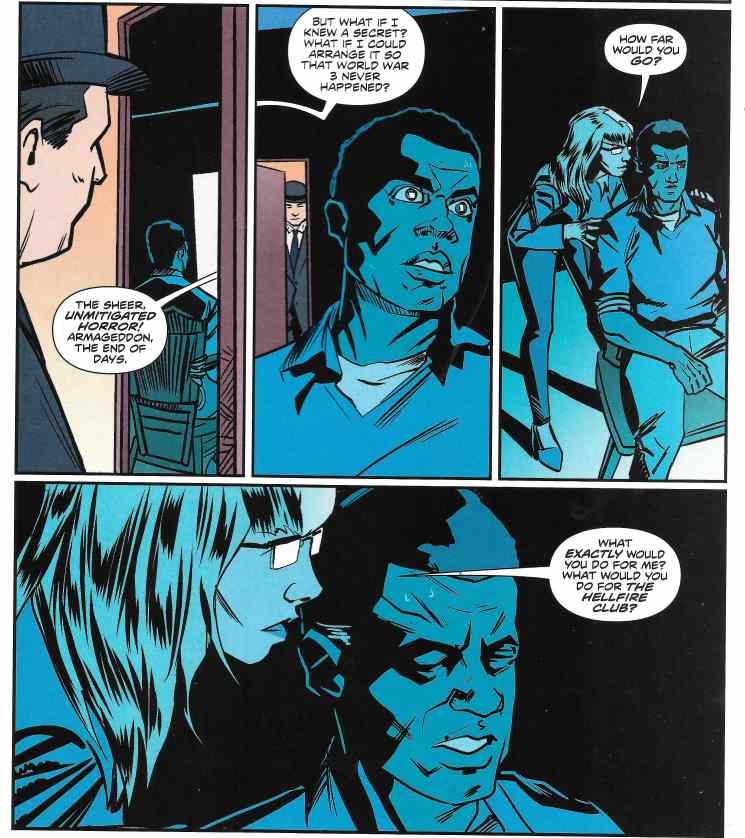 However, John won’t expose the jig quite yet. He’s taken by a judo chop to the back of the neck while inspecting the projector. 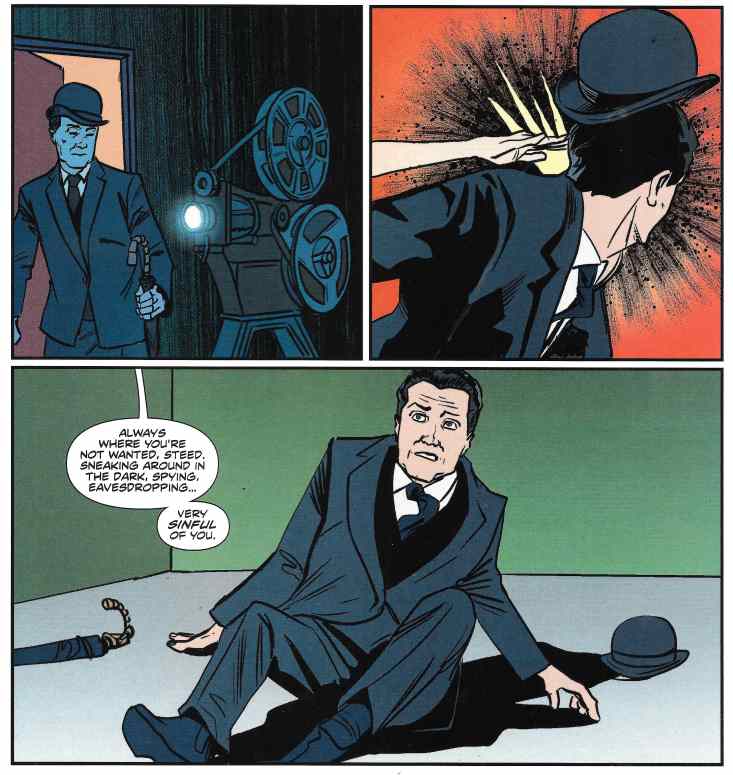 And his assailant is revealed to be none other than… 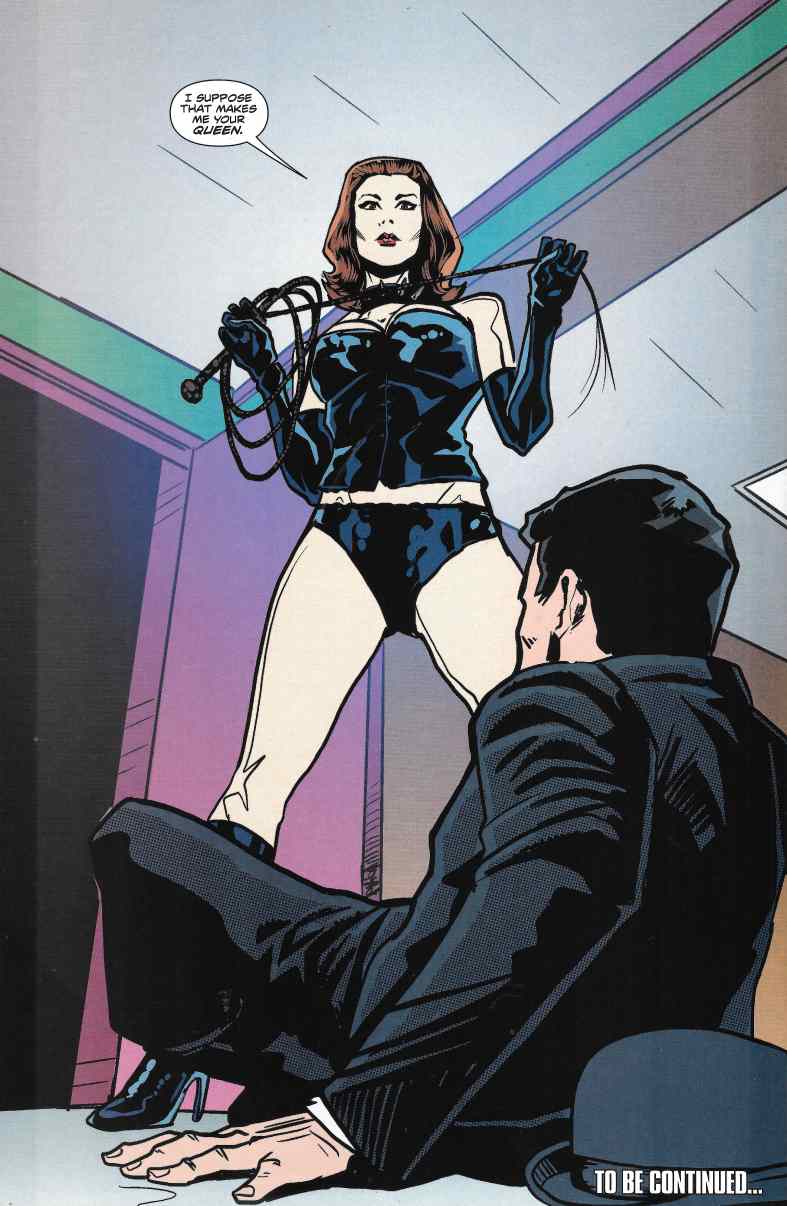 …a brainwashed Emma Peel, reverted to her Queen of Sin costume for dramatic effect. Makes you wonder what is it with Hellfire Clubs, sexy ladies in black lingerie, and Queen titles that always seem to go together?

This was an enjoyable, if short issue. The art, while minimal in places, conveyed the story well enough and I like the direction the book is going. I’d pick up more to see if it continued on in The Avengers trend.

It certainly has created a hankering for those old shows, though. If you are like me and similarly inclined to want a rewatch, I’ll leave you to browse youtube and check out The Avengers Forever website. You’ll find all manner of information there on the show, the cast and the trivia, all well organized and documented.

Posted by SonOfCthulhu at 1:47 AM