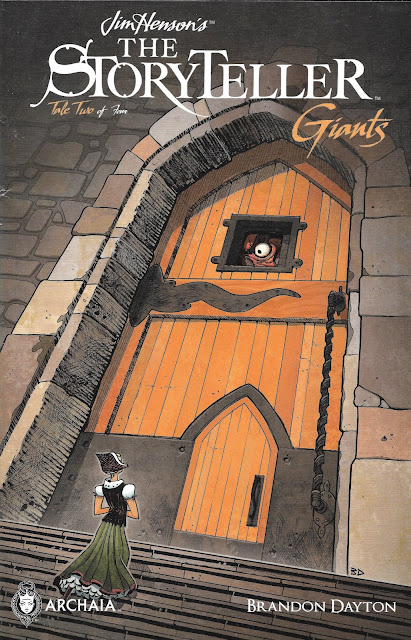 Can this comic series possibly live up to the show?

"The Tailor’s Daughter”
Story and Art – Brandon Dayton
Color Assist – Spencer Holt
Design – Jillian Crab
Assistant Editor – Cameron Chittok
Editor – Sierra Hahn
October 2017
Jim Henson’s The Storyteller is one of those pristine family series that entertains everyone equally. Released stateside in 1987, the British series originally featured John Hurt as the titular Storyteller and utilized Henson’s trademark puppetry for the various fantastical elements of the European folk stories Hurt would weave to entertain his faithful blonde Pudelpointer (a type of dog that Jim’s puppetry and Brian Henson’s voice bring to an all too real kind of life) Cloggs. 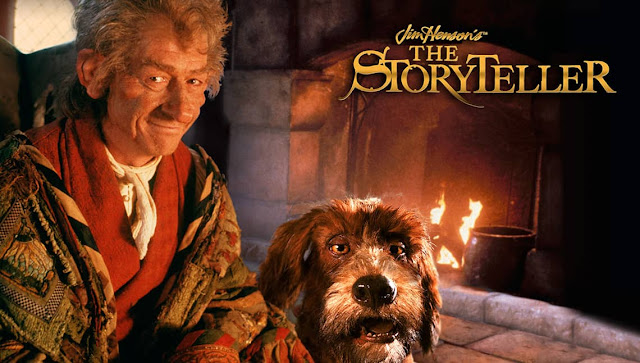 The show was fantastic, winning an Emmy for Outstanding Children’s Program for Hans My Hedgehog that first year and being nominated twice the next year for A Story Short and The Luck Child. The show later would garner BAFTA awards for Best Children’s Programme and Best Costume Design and a nod for Best Make Up.

The sad part for me is that the series was so compact. The first season was only nine episodes and they leave you desperate for more. It’s like someone cracked open a fairytale book to rival all of Grimm’s or Andersen’s combined and then only read a scattering before closing it shut forever. And like eager children begging for a new bedtime story, those nine make you wish the show had a hundred episodes.

Exceedingly well produced, meticulously adherent to a charming tone that respected the source material yet robbed it of none of its power to enchant, the stories produced were also painstakingly researched. Series developer Anthony Minghella deserves the credit there, as it took him two years to investigate and write the screenplays for those nine episodes. All that effort paid off in a series that valued quality over quantity. 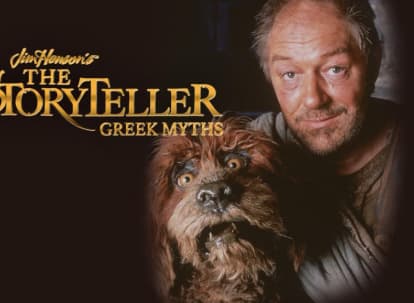 The show received a second season, although this time Michael Gambon took the role of a different Storyteller (although featuring the same dog voiced by Brian Henson). Gambon’s Storyteller was a ancient Greek forced to wander the Minotaur’s labyrinth looking for a way out while entertaining his companion dog with four tales of the classic Greek Myths.

I caught the entire production on HBO and thought that it was made specifically for that cable channel. The run featured both series together and I fell in love instantly. A few years ago a DVD version of the definitive collection came out and I snatched it up. 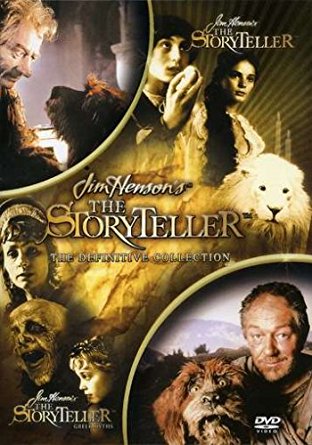 When picking up the discount bin find The Storyteller: Giants book presented here, I was a bit skeptical. Archaia has produced four series so far in The Storyteller comic book franchies, each focusing on a different fantastical creature (Witches, Giants, Dragons, and Faires). But even with the type of success those expansions implies, could anything be as good as Minghella and Henson’s TV show?

We should take a look and see…

Our opening, to anyone who has seen the show, arrives as expected. The Storyteller sits sewing by the fire with Cloggs napping on the hearth. He exclaims as he pricks his finger and that awakens his pet and companion. 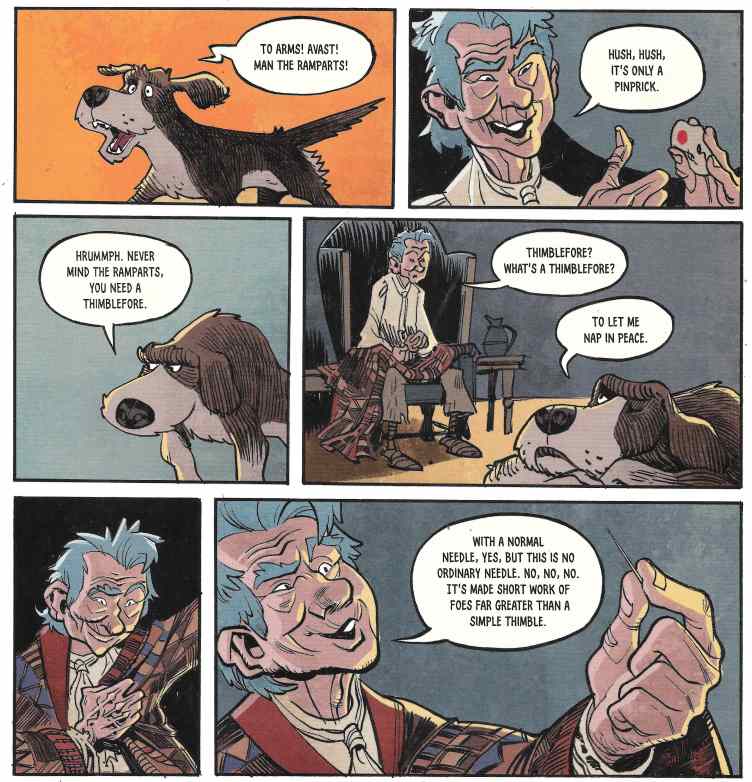 Which leads to our narrator beginning his story opening, as Cloggs gets comfortable and we shift to the house of a tailor who knew he was close to death… 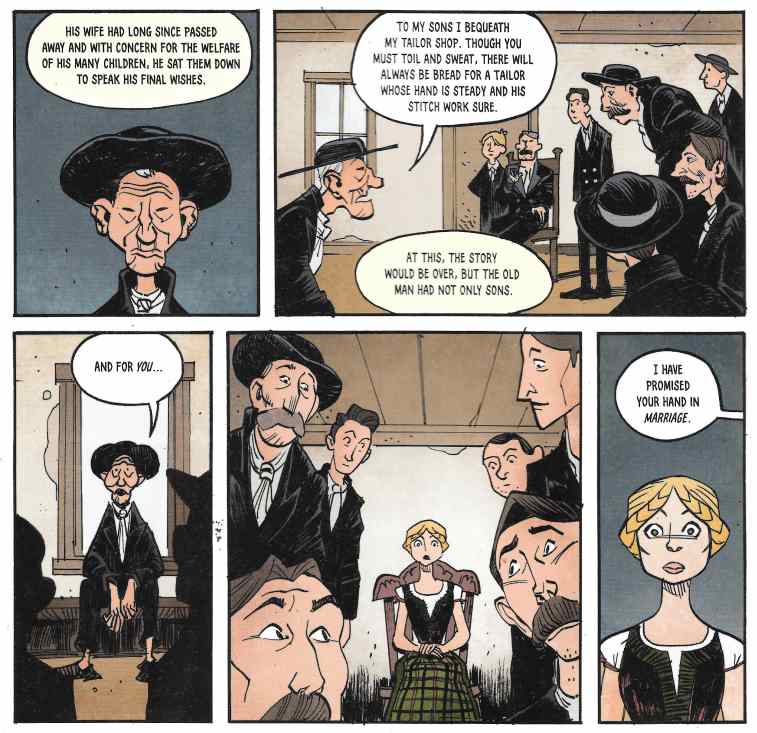 The daughter’s hand in marriage now belongs to the great, rich lord who lives in the castle upon the highest hill in the land. Being a dutiful daughter, she does as she is asked to do, but she has one request. Her father does not send her off empty-handed. 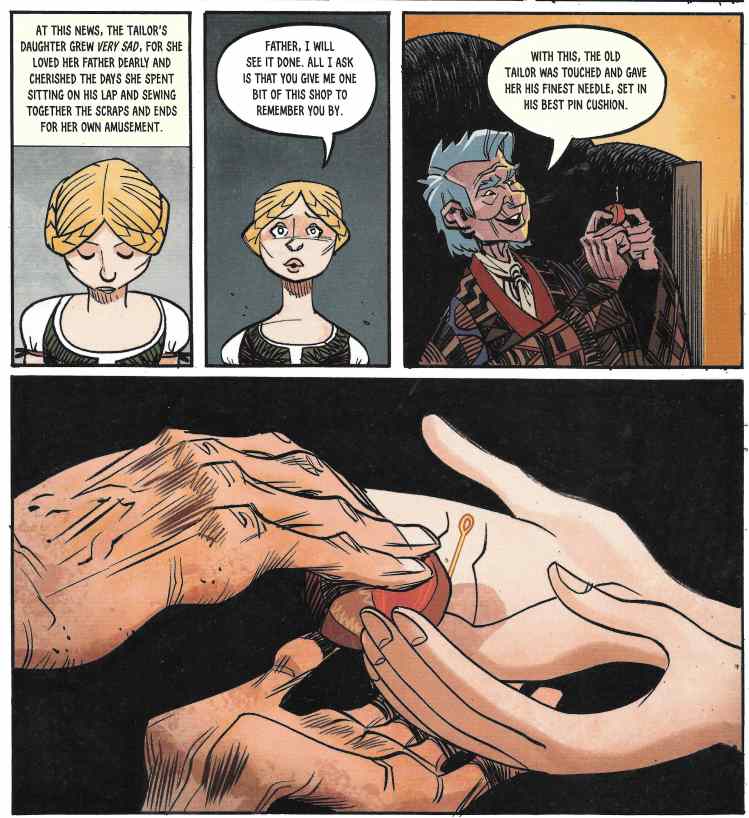 Along the way to the castle she encounters three animals, each in a trap. They have been caught by the “Great Lord” that is her bridegroom and she sets each free. For her good deed, each gives her a magical item of great value. The goose gives her a collar that can’t be cut, the rabbit gives her boots that can’t be burnt,… 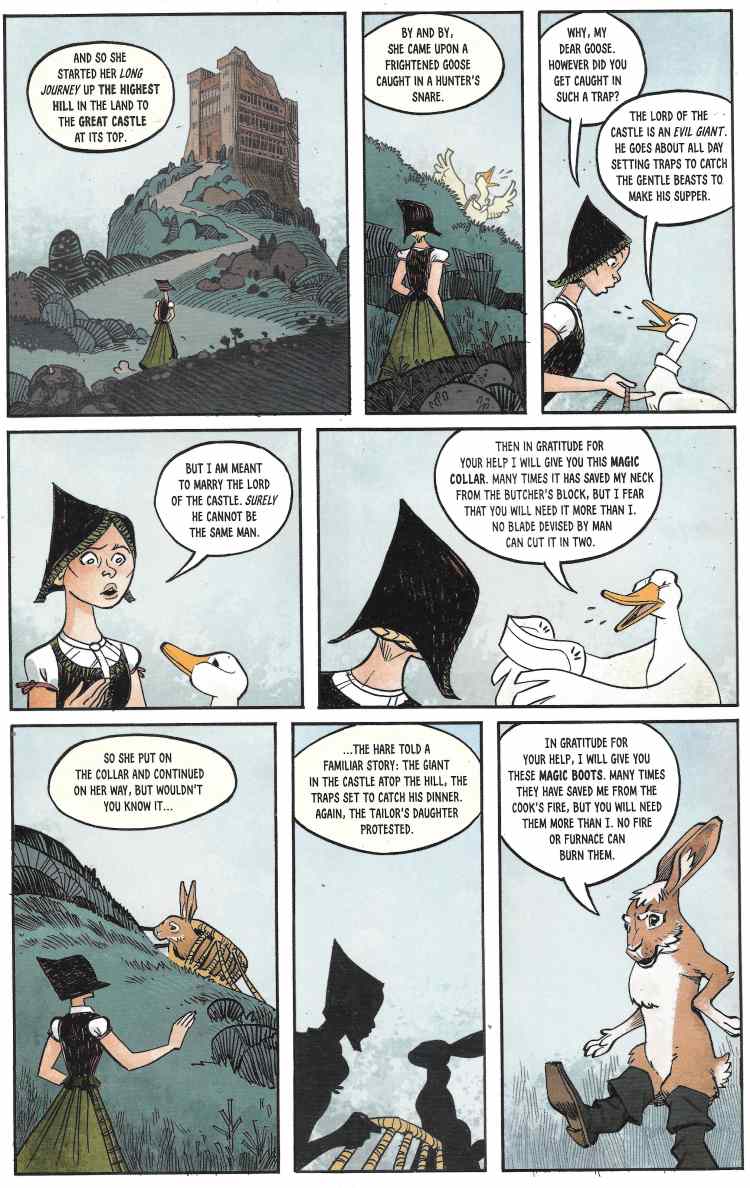 …and the mare gives her a hair comb that saved him from the lion’s paw(somehow?) 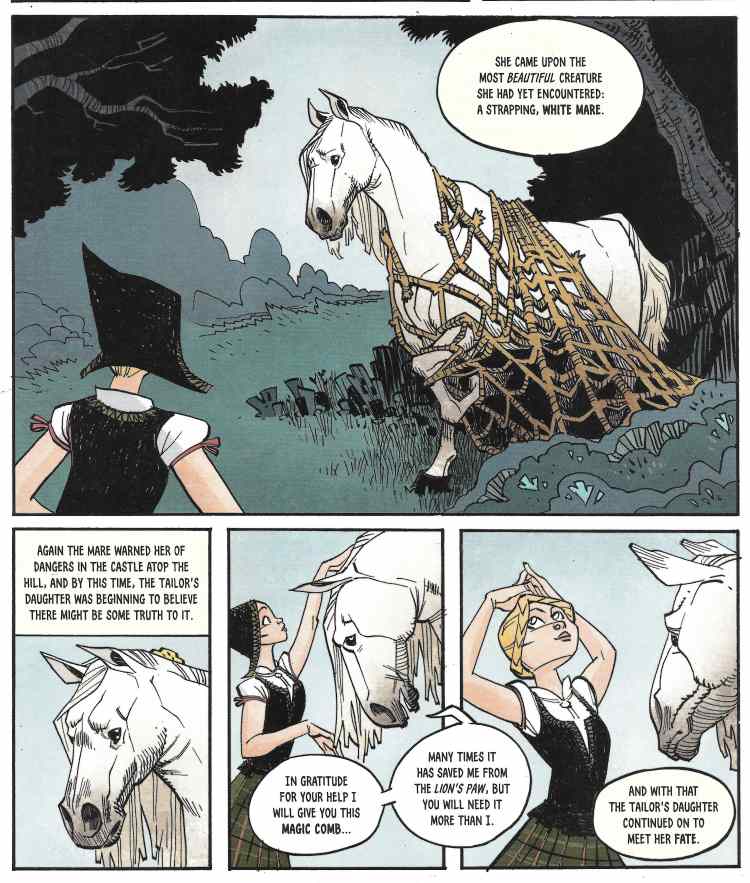 Note that the number of items and animals is NOT a random thing. I’m nabbing this from the trivia page of IMDB: In folklore, three parts often represent the past, the present, and the future (which are mentioned in The Storyteller series introduction narration). However, it also used to be interpreted as a cycle of life: life, death, and rebirth. In every show of the first season the number three featured prominently in terms of encounters or attempts on a characters life or number of items…all in keeping with the "rule of three" in the original tales.

It’s actually quite wonderful to apply the idea of this “sacred story rule of threes” to something like J.K. Rowling’s Harry Potter ending with the story of the three brothers and the three magical items they received from death (Elder Wand, Resurrection Stone and the Invisibility Cloak) also known as the Deathly Hallows.

I don’t have space here to boil this down even more, although the rule of three is a constant in folklore and even modern storytelling. What I will do is point you to other sources that explain the rule of three and how it relates to literature. HERE is a great piece on Fairytalez.com on just that.

Back to our story, however, as Brandon Dayton draws us in even more as, after the Storyteller and Cloggs having a brief discussion on whether the dutiful tailor’s daughter should have run away at that point, we find her knocking on the door of the castle. 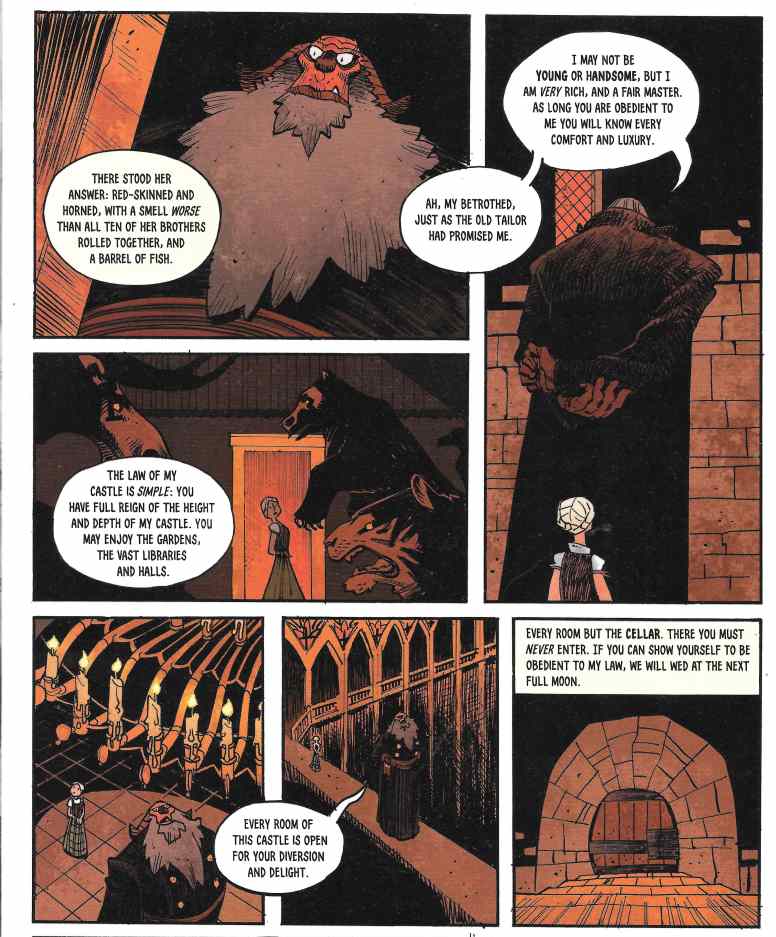 Her betrothed is a horrible giant! However, this opening reeks so much of Beauty and the Beast that you might feel this is going to travel down that path with the giant transforming into a handsome prince at the end. I’ll spoil this a little by telling you that you are only half wrong in that assumption.

After such a tour, the giant has the daughter for supper...NO! No! NO! Not HAS her for supper, but you know? Dines with her. Not ON her.

However, he has terrible table manners. 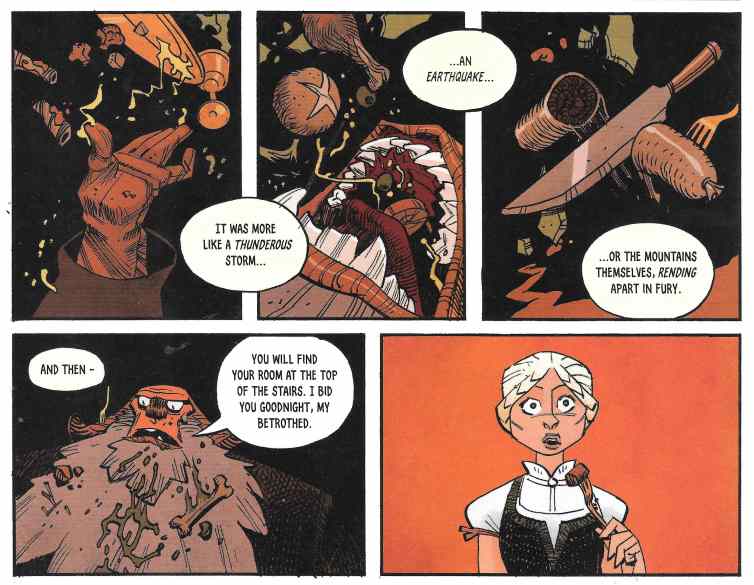 Still, that’s not all that bad. Eating habits can be changed with a few beatings and some electro-shock. I should know, I’m the parent of a teenage boy.

After a fretful night of barely sleeping, the daughter finds herself alone in the castle after the giant leaves to check his many, many traps. I’ll let the Storyteller take over from here… 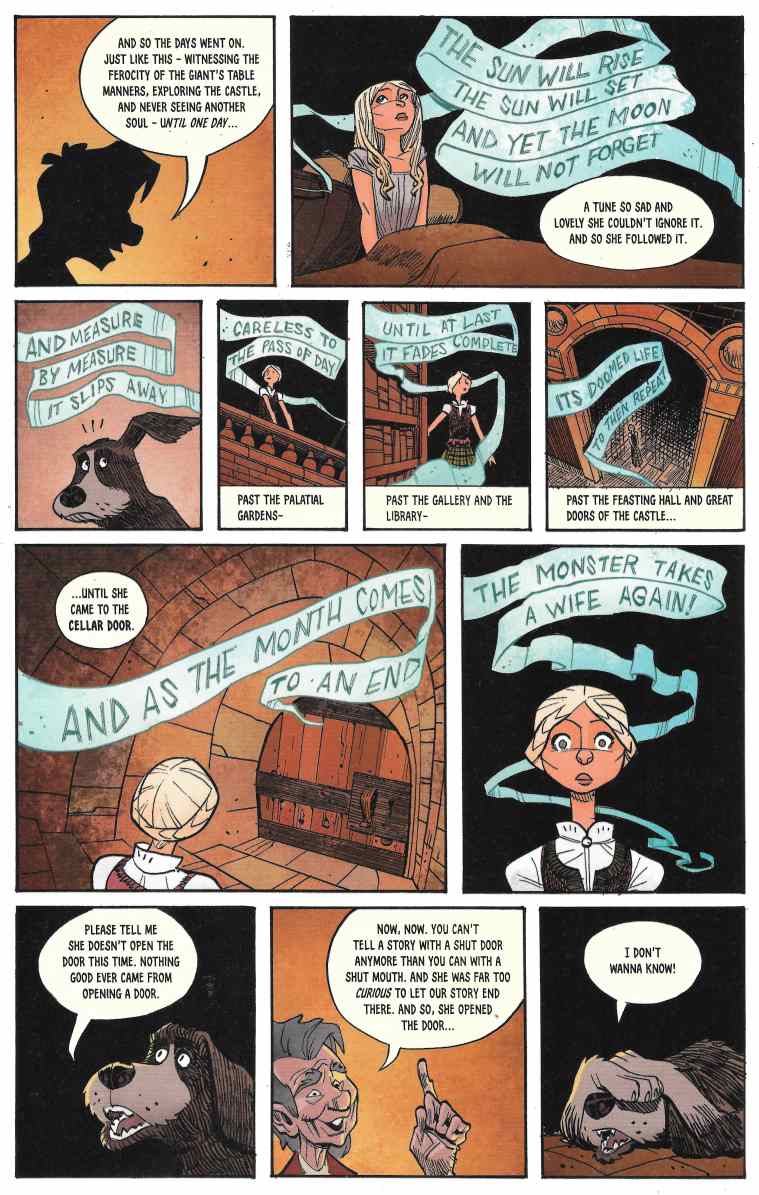 …and she opens the door to find… 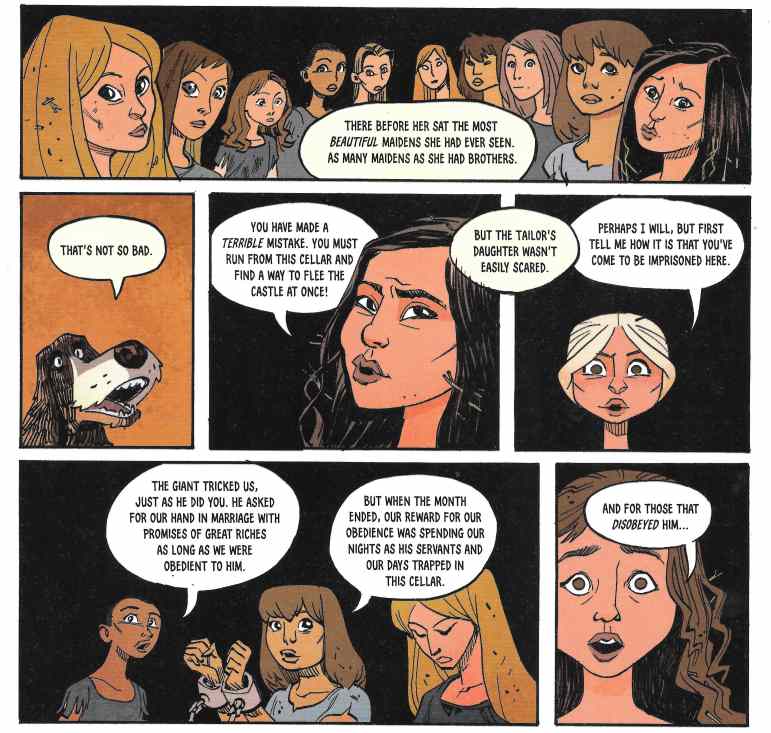 …a room full of the giant’s brides. Those who remained faithful were turned into scullery slaves and those who did not follow his rules… 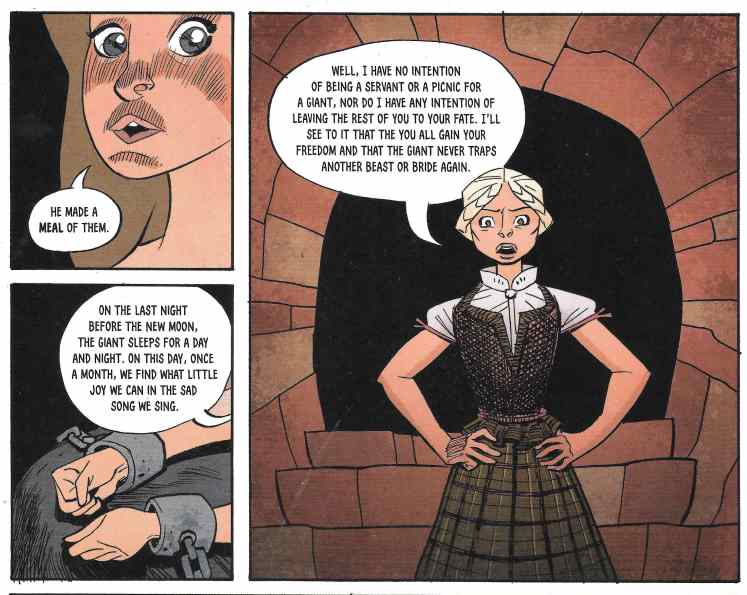 And with that, the daughter’s will is tested as she can find no way to escape the castle and the garden maze outside. At last she calls upon the one animal who pledged to come to her aid and beseeches him for any information on how to escape the giant’s clutches. 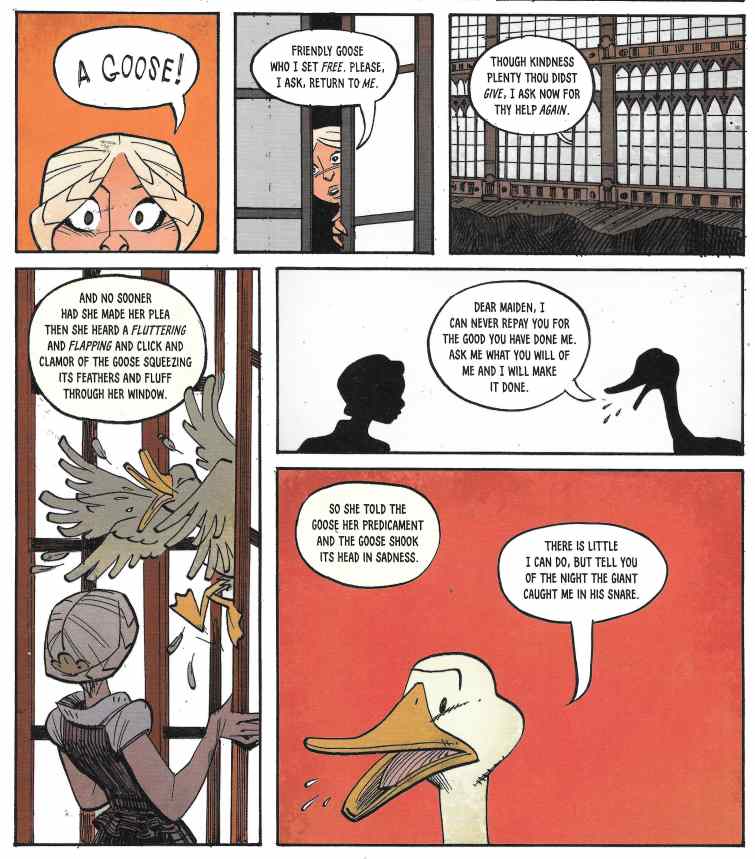 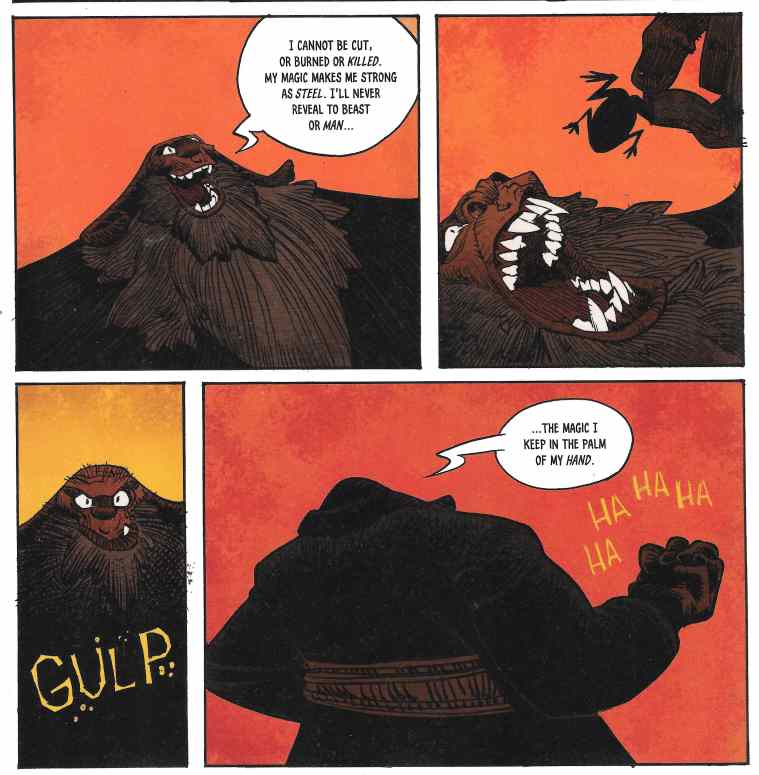 She sends the goose off and prepares to meet the giant in a test of cunning, for you see… 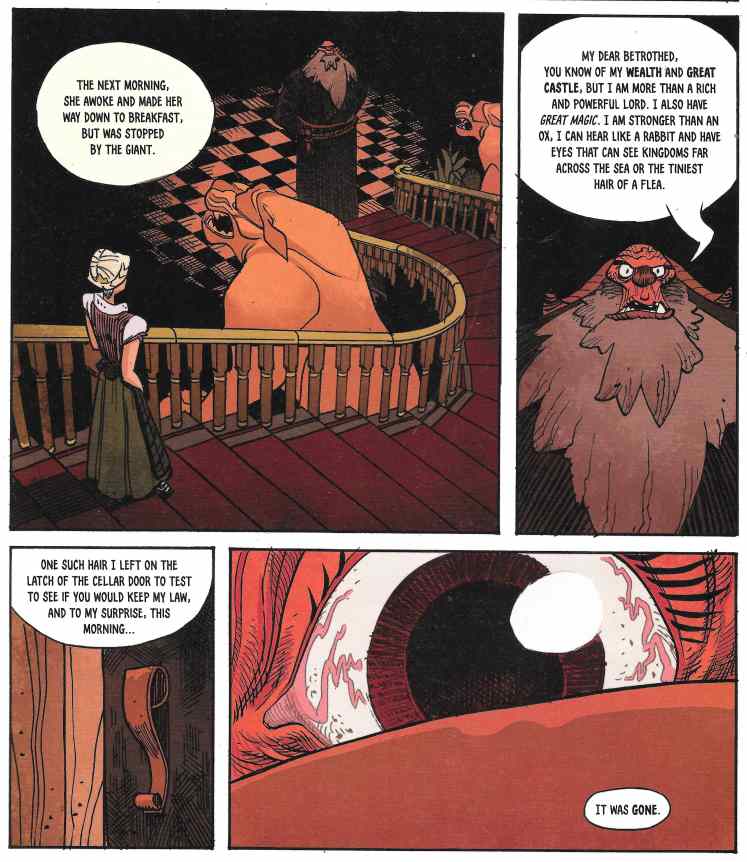 …and with that, he snatches her up and prepares to devour her, but the daughter cleverly outwits him, time… 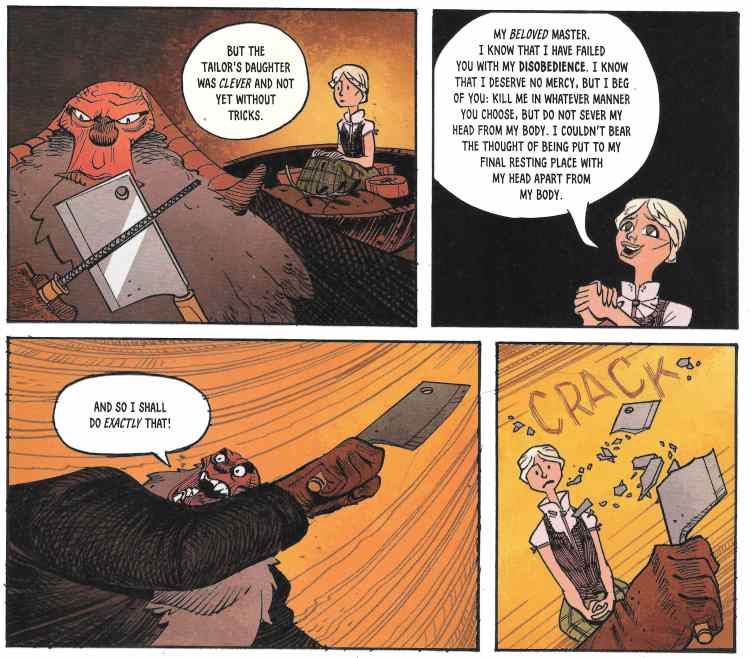 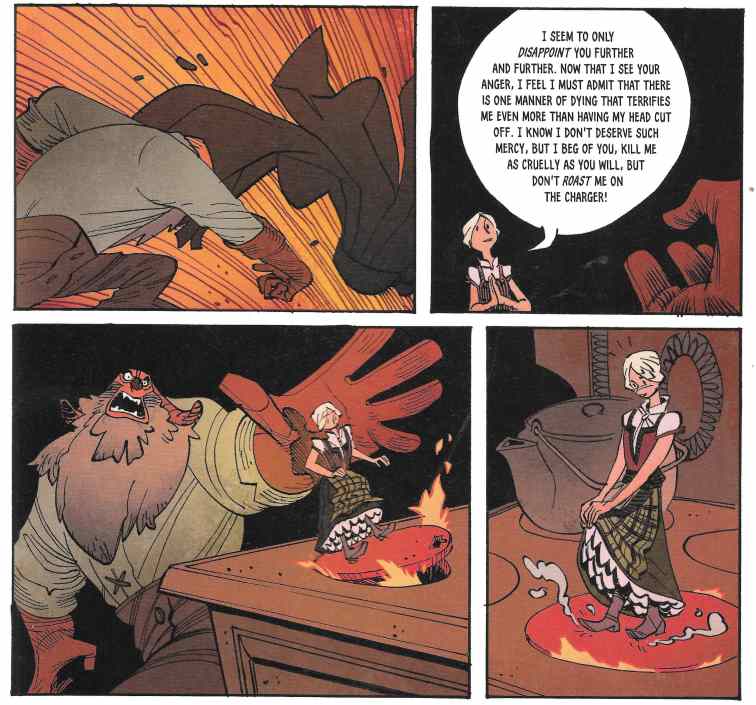 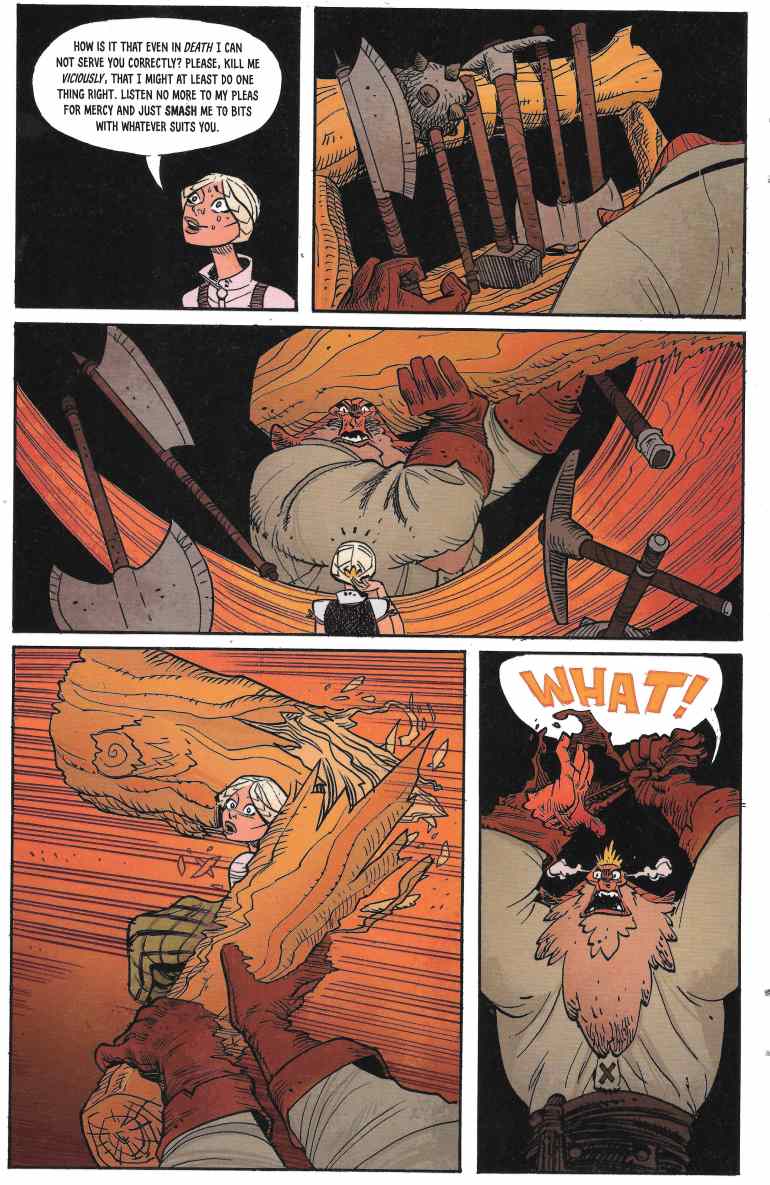 Until the giant is so furious that fire spat from his mouth. But the daughter’s cunning had one final trick up its sleeve… 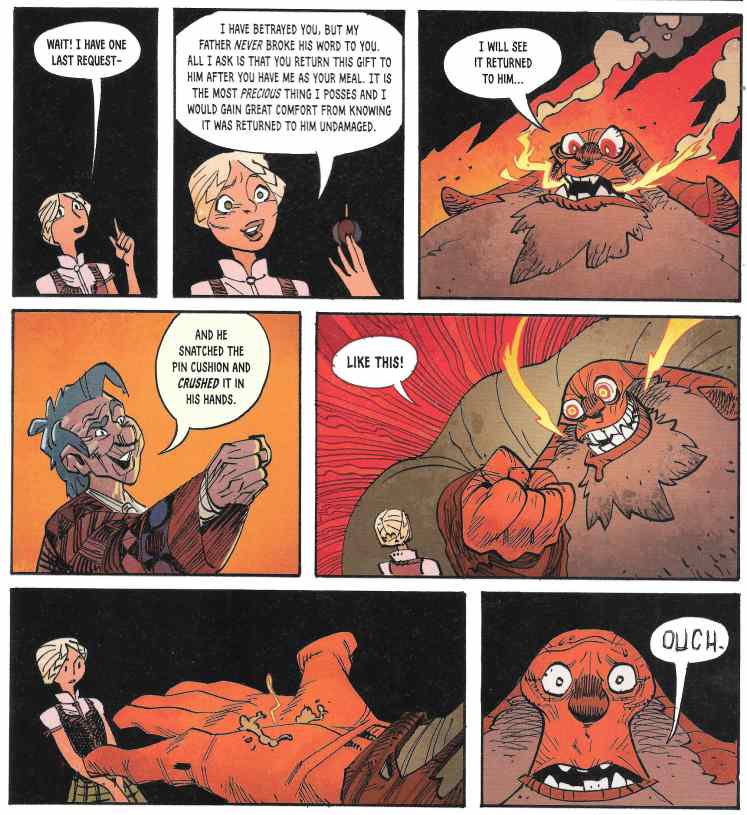 …and with a poof, the giant is transformed into a tiny little gnome that the daughter dispatches to a horrible, yet rightly deserved, fate. 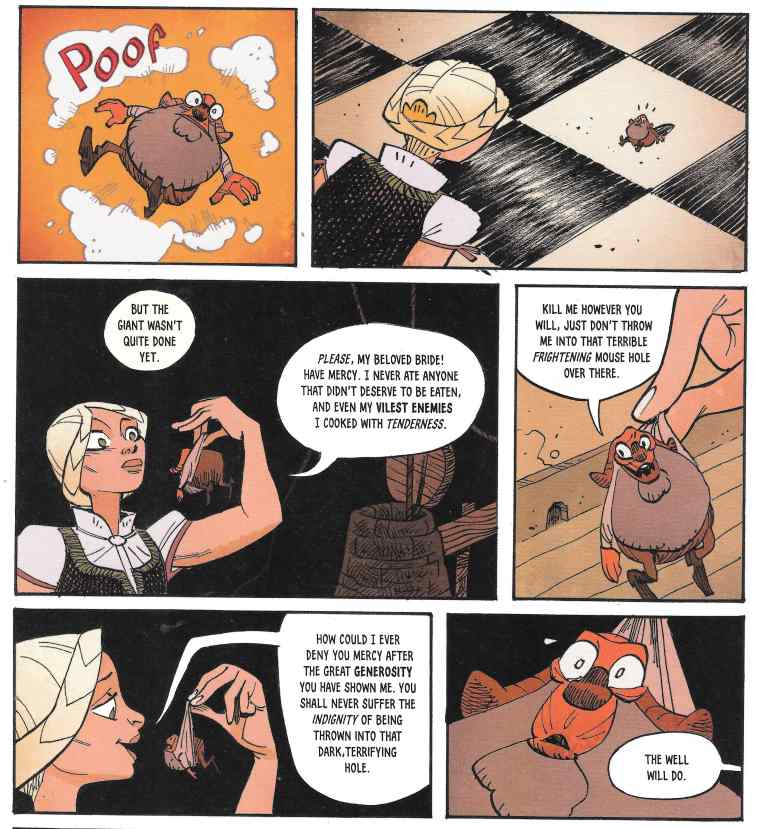 In the end, the prior brides reverted to being princesses once again, the hare became a handsome footman, the goose a giant swan, and the mare a noble knight. The daughter and the goose flew them all back to her father’s tailorshop where… 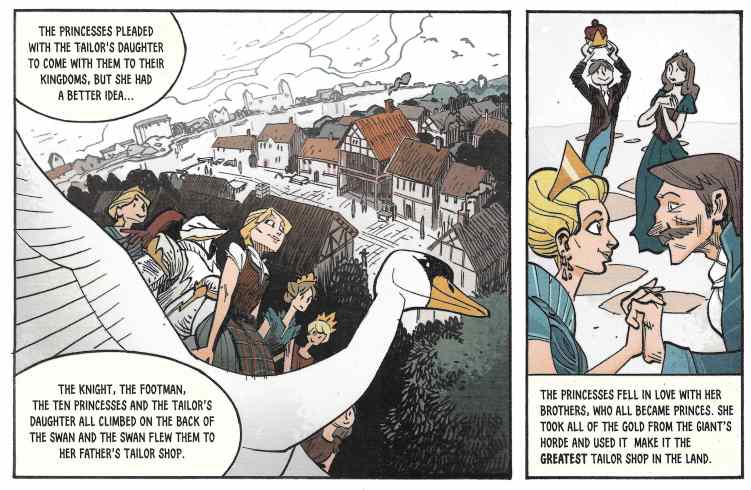 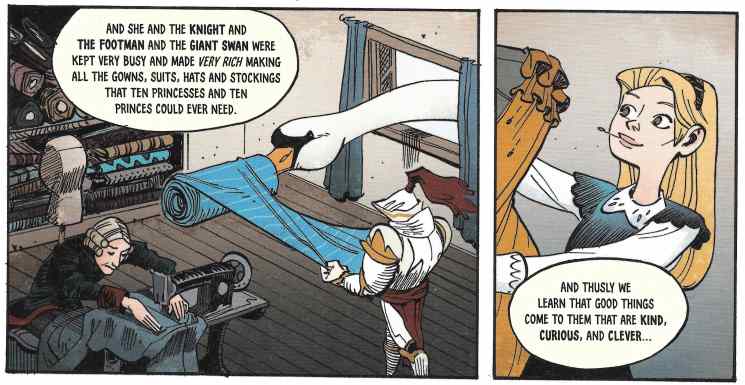 …and the Storyteller has it over Cloggs one final time. 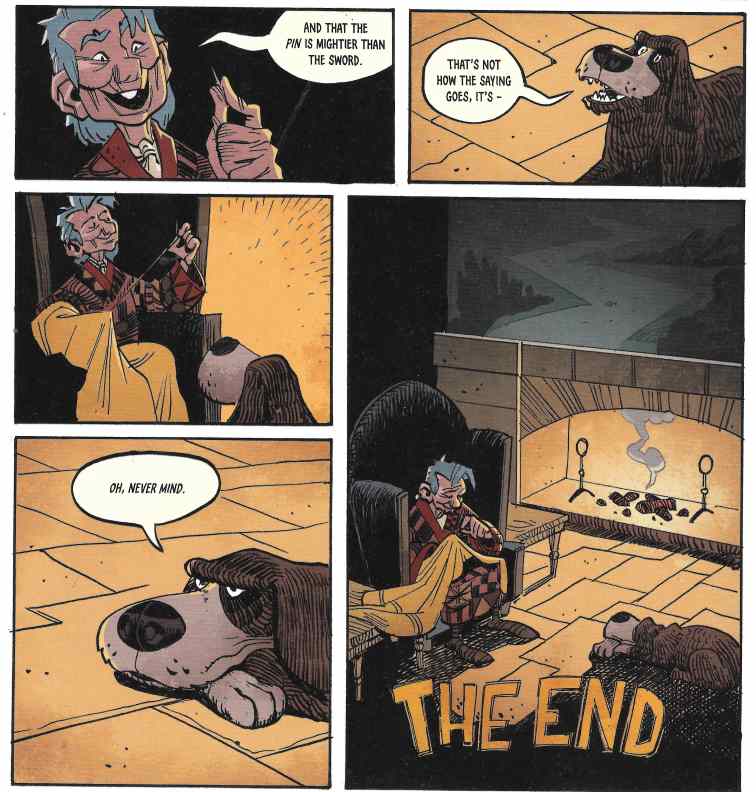 SUCH a good story! I love this book and feel that it matches the beats of the TV show very well. In addition, it stands up on its own as a decent fairy tale story. If you enjoyed Jim Henson’s The Storyteller series, these books appear to be worth checking out. They definitely have that same kind of magic!
Posted by SonOfCthulhu at 9:56 AM