The Savage Dragon vs the Savage Megaton Man #1 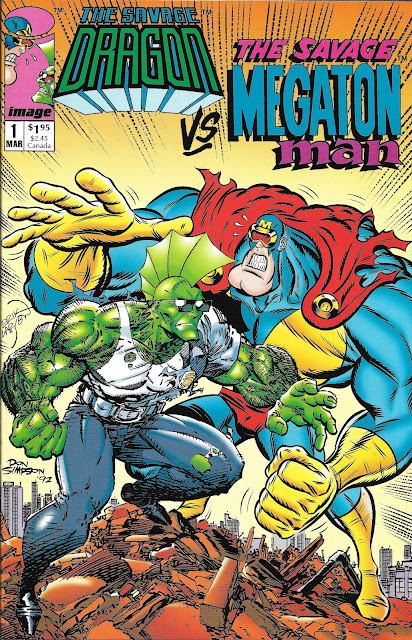 One ‘sen helping the other 'son out

When it comes to odd pairings, they don’t come much odder than this one: Conceived on the heels of a chance meeting of creators Erik Larson and Don Simpson at the 1992 Chicago Comic Book Convention after Larson suggested they do a team up of their two most popular heroes, this book has made a few appearances in the Crapbox over the years. Taking one of the most visible successes of the Image universe with Larson’s Dragon and pairing him with the obscure 80’s indie cult hero Megaton Man didn’t set any sales records.

The book itself is a bunch of fun though, showcasing Larson’s humor in a way that I don’t think the Savage Dragon allowed many opportunities. The book challenged both artists skills, as they collaborated on many pages. In this early internet world, that mean those storyboards got sent back and forth from California to Pennsylvania so much that Larson claimed, “this comic probably spent more time in the air than on the ground.”

This was Don Simpson’s second coming. He made a name for himself in 1984 with Megaton Man, a superhero parody comic that Simpson wrote and drew. The book was released by Kitchen Sink Press, one of the pioneering publishers of underground comics, best known for their full reprint of Will Eisner’s The Spirit.

Simpson’s work on Megaton Man kept him releasing books in the superhero parody vein through the end of the eighties, even when other publishers complained his satire came a bit too close to their copyrights. Marvel tried to shutdown further appearances of Simpsons’ Megatropolish Quartet, claiming that Liquid Man, See-Thru Girl, Yarn Man bore too close a resemblance to their Fantastic Four counterparts. Kitchen Sink cited Fair Use doctrine and Marvel dropped the objection.

By the time this book was released, Simpson had parted ways with Kitchen Sink and taken his intellectual property with him. He signed on with Image to do work on their Splitting Image title and ended up agreeing to work with Larson on the Dragon meets Megaton title. And although my Crapbox sense warned me when I found this issue in so many discount bins, I was pleasantly surprised by how entertained I was with it.

We begin our saga with the Dragon on patrol and running across some tough customers. That doesn’t intimidate the Dragon though. He’s the one doing all the intimidating. 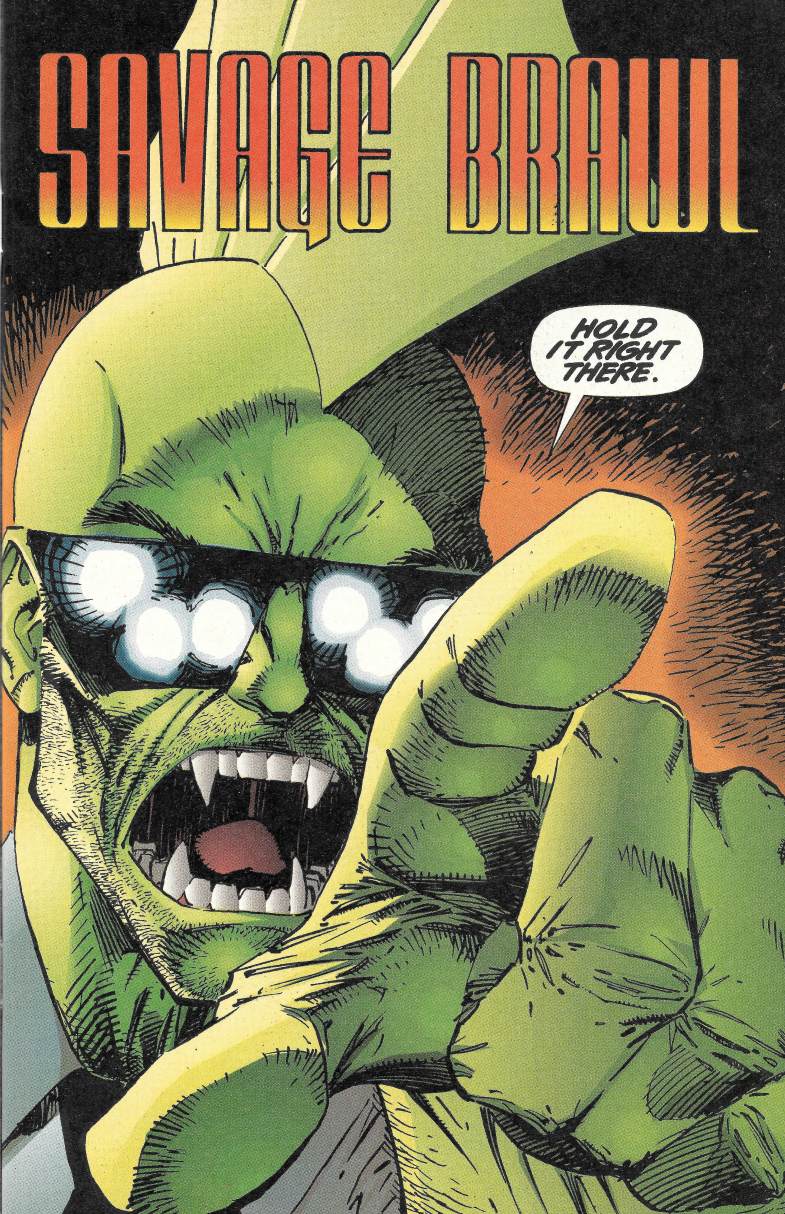 And apologies for the crappy scan here, but this two-page spread is who he’s fighting: Johnny Redbeard’s “Nixed Men!” 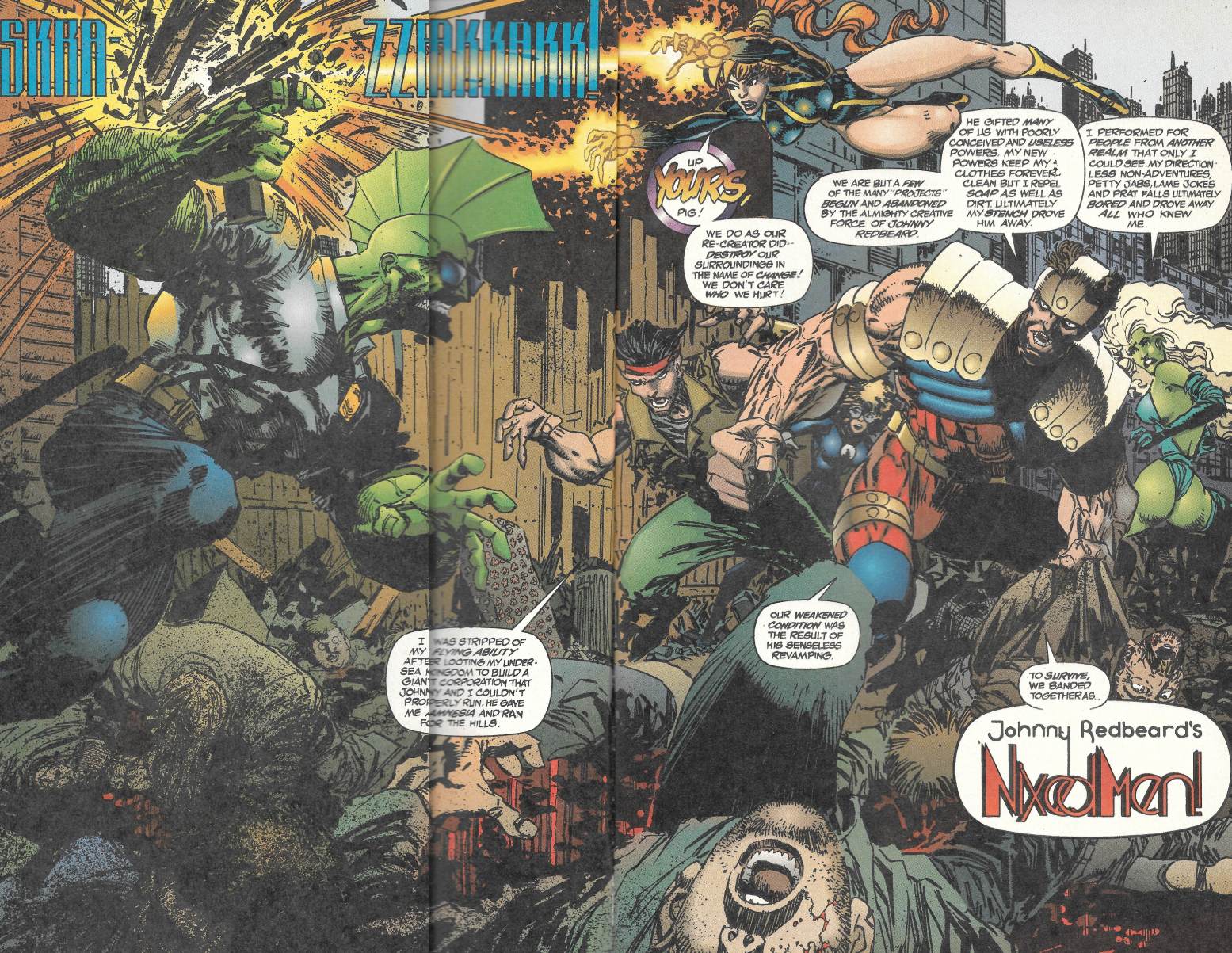 In case you can’t read that or don’t catch the joke, these five are a parody of various characters that John Byrne had written over the years, and Larsen is SKEWING him.

The characters state they are doing as their creator has done, which is namely destroy things in the name of change. And what, pray tell, does that mean? The muscle bound guy to the left with the odd haircut says he lost the ability to fly after looting his undersea kingdom to build a giant corporation that he mismanaged. Then Johnny gave him amnesia and ran for the hills. This is all an allusion to Byrne’s run on Namor, the Sub Mariner.

The huge guy in red and blue standing center-stage says that he was gifted a poorly conceived and useless power to keep his clothes clean forever but this power to repel dirt also repelled soap. Now he reeks so badly that his smell drove Johnny away. I had to go to Brian Hughes of 3rd Degree Byrne to catch that this was supposed to be Byrne’s Superman, whom Byrne concocted the idea of a body aura that protected his clothes but not his cape.

And our last speaking part is the girl on the far right, a stand-in for She Hulk who states she performed for people of another realm that only she could see (a reference to Byrne’s fourth-wall breaking run on the title) and that her “non-adventures, petty jabs, lame jokes and prat falls ultimately bored and drove away all who knew me.” I can say that I remember buying She Hulk at one time, but not why I stopped. Possibly it was price related more than being bored or driven away.

However sharp you register these criticisms and even if you are offended on Byrne’s behalf, you have to give Larsen some credit for stabbing so straight into the heart of Byrne’s work with some clever observations. I haven’t read any of the Larsen Dragon run (I KNOW! For shame on me. The Crapbox has a bunch, but it gets buried behind LOTS of weird things.), but if any of it comes off as this kind of biting commentary on the medium then I’m going to need to prioritize getting to them.

Creator commentary aside, the Dragon moves the plot forward a piece by focusing on taking these murderers in. He’s too much for them and as they scatter, they mention alerting a powerful ally. 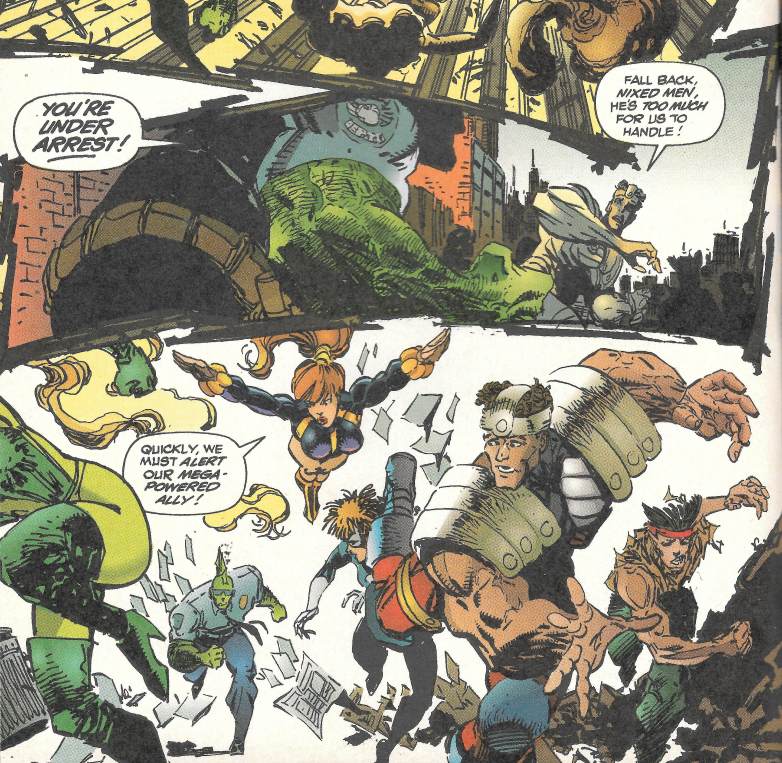 And with that we switch over to Don Simpson’s pencils and characters, with a page introducing a few of his HUGE cast of superhero parodies. Yarn Man and Liquid Man are members of the Megatropolis Quartet, a foursome that parodies Marvel’s Fantastic Four. Rubber Brother and Phantom Jungle Girl are frequent Megaton Man side characters. 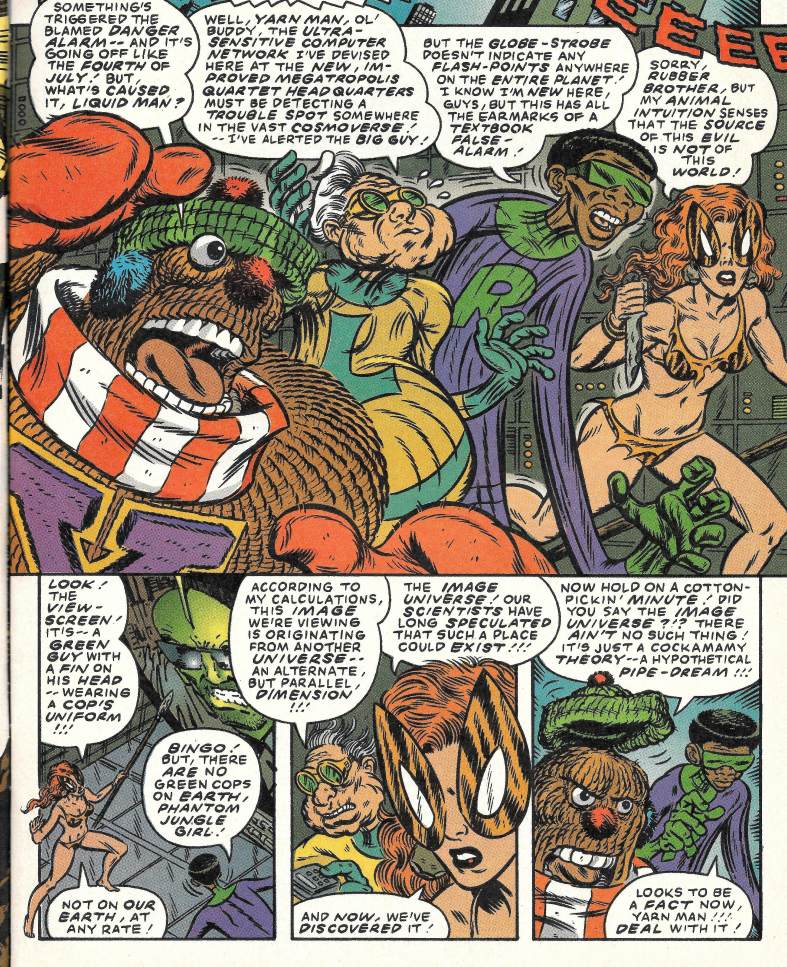 Stylistically, you can see right away that meshing this odd-ball universe with Larsen’s gritty Dragon panels looks to create some rather jarring juxtapositions. And while that may be true, the storytelling is top notch. Watch as Simpson has the characters explain the existence of the “Image Universe,” a name so spot-on that you must smile a bit.

Not to mention how easy Simpson has these halfwits misread the situation to jump start our smackdown crossover. They see the dragon as some kind of “green-finned alien from Image-outer space” who are wearing police uniforms because they’ve infiltrated society…”Maybe even the Post Office!!”

As for the Nixed Men, our villains of this piece? They get a pass for looking like traditional heroes. 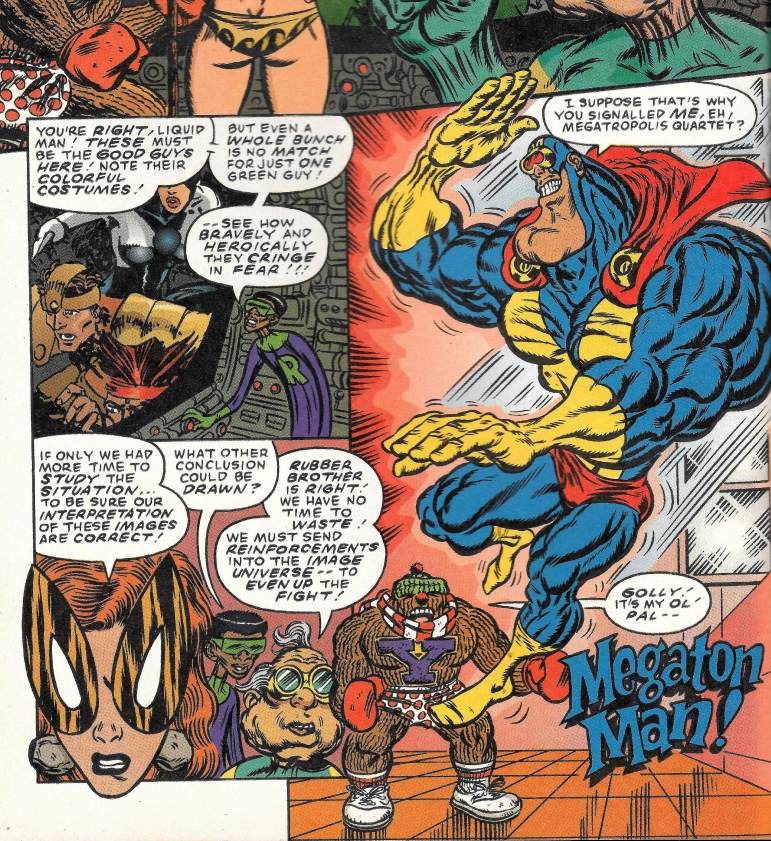 Who jumps on the Time Turntable and is gone before you can ask what’s on the B-side. But wait…the rest of his team lose contact with the Image Universe leaving him to face the Dragon alone. 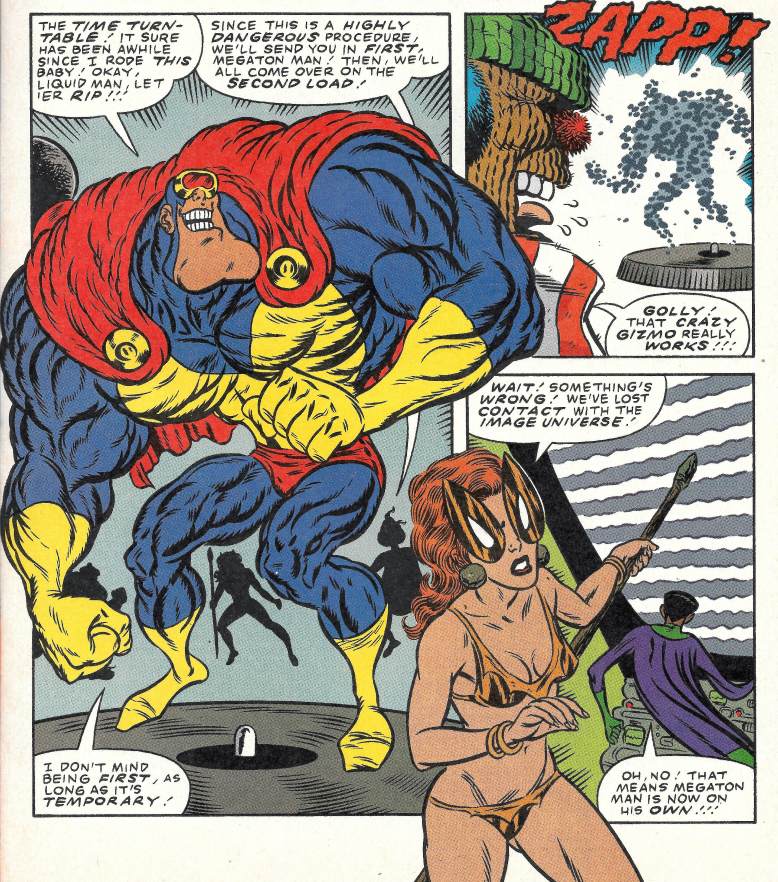 And while Megaton Man ponders whether he’ll be inked in some “new-fangled cross-hatch manner”, he finds himself standing between the Dragon and the escaping Nixed Men, which isn’t a good place to be. 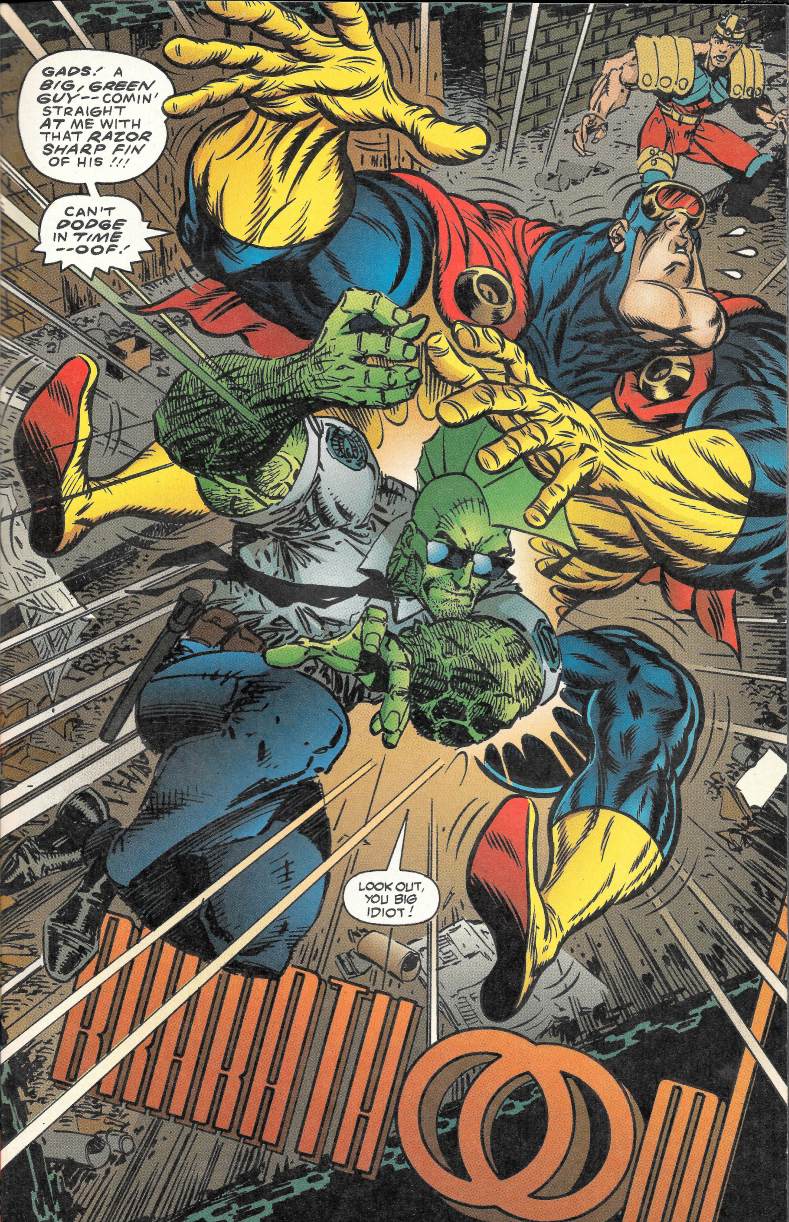 The pair square off immediately and the book quickly devolves into one liners and punching…but in a good way. Larsen and Simpson are having fun with this, inviting us to join in too. 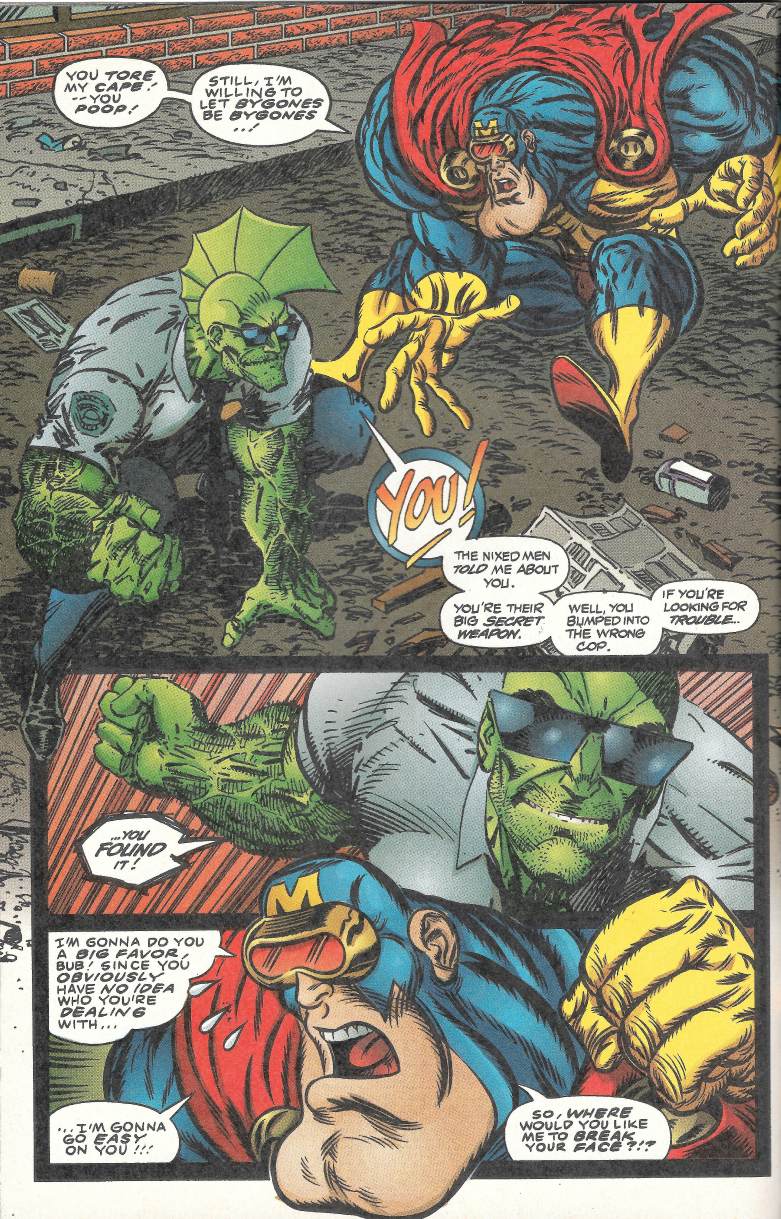 After a few pages of smacking each other around we get some blood out of Dragon which produces a neat reaction in Megaton Man. 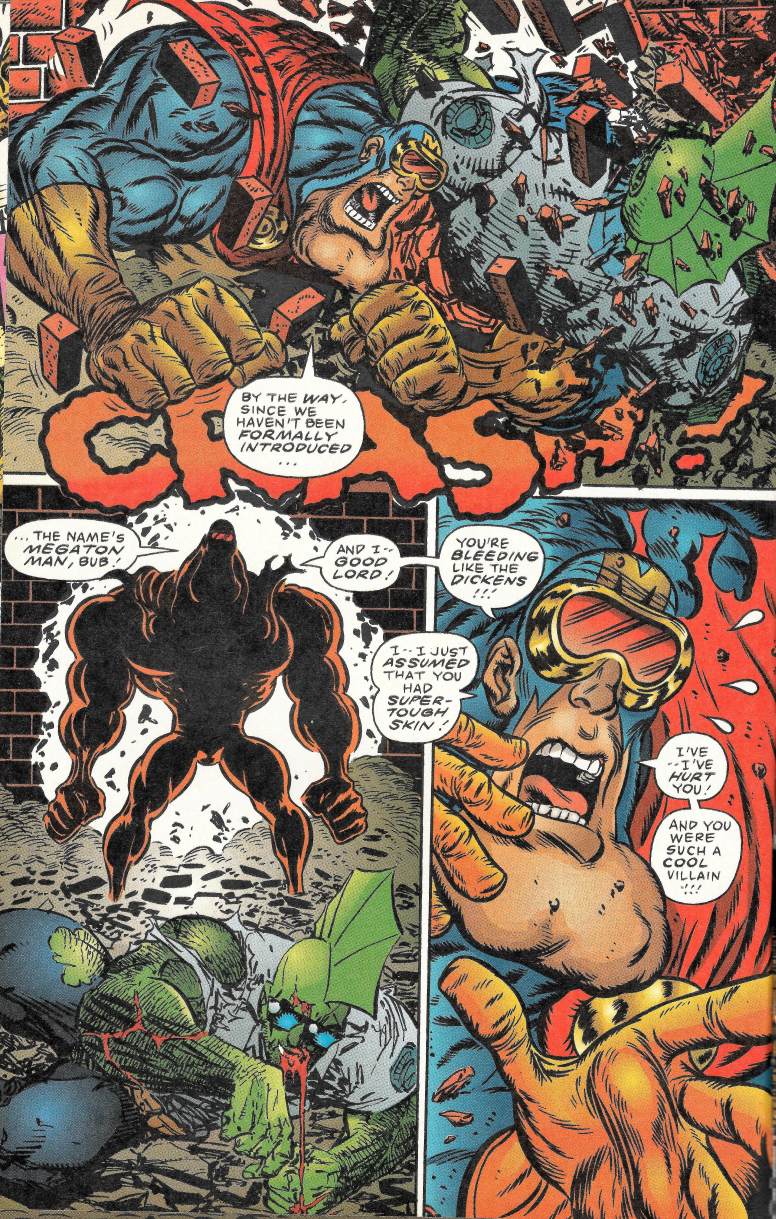 And it’s at this point that the heroes start talking to one another and we think this is all over. However… 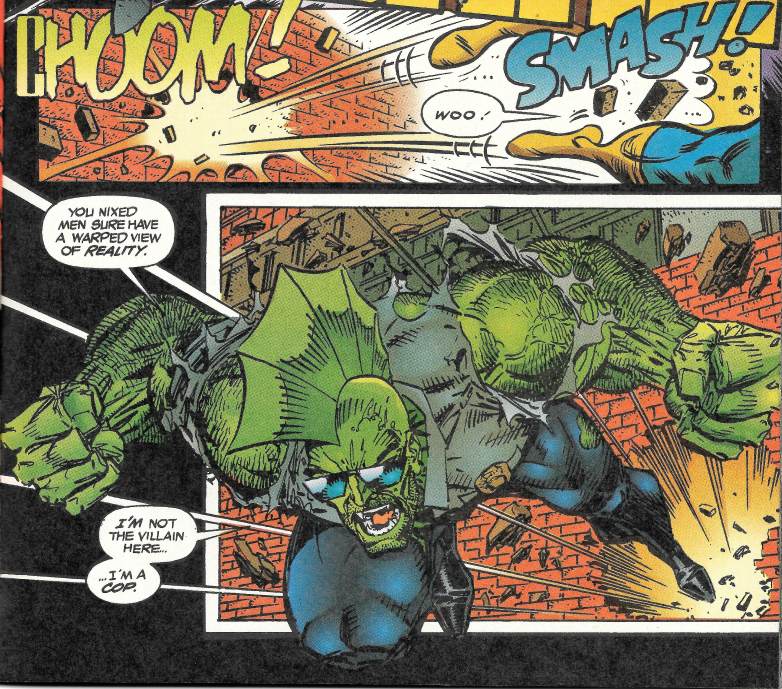 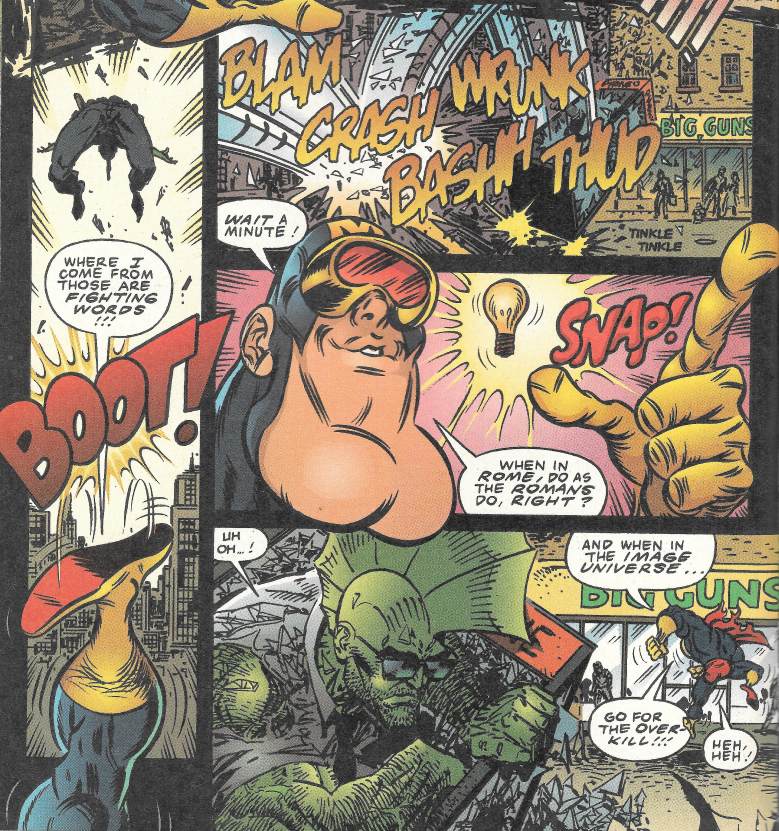 Megaton decides to join in with the Image way of doing things and voila! 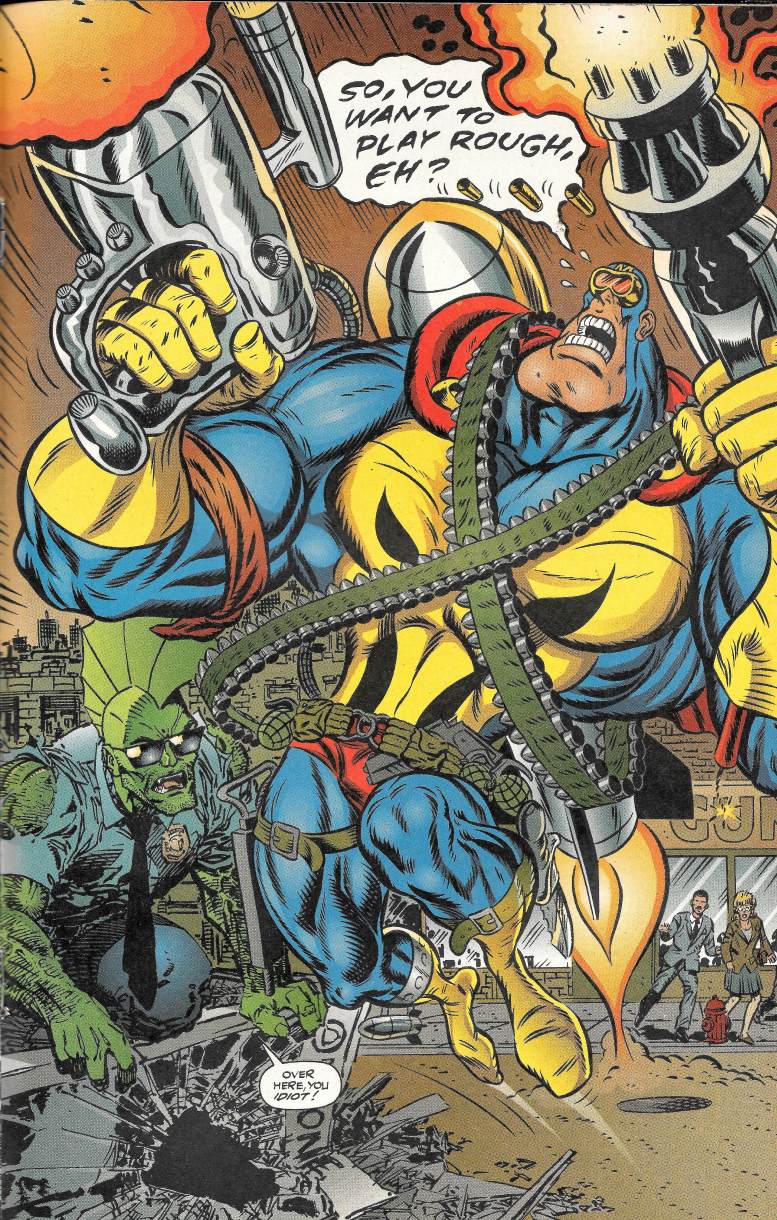 Silly. Fun. Entertaining. The key to this match up is that it knows not to take this seriously. 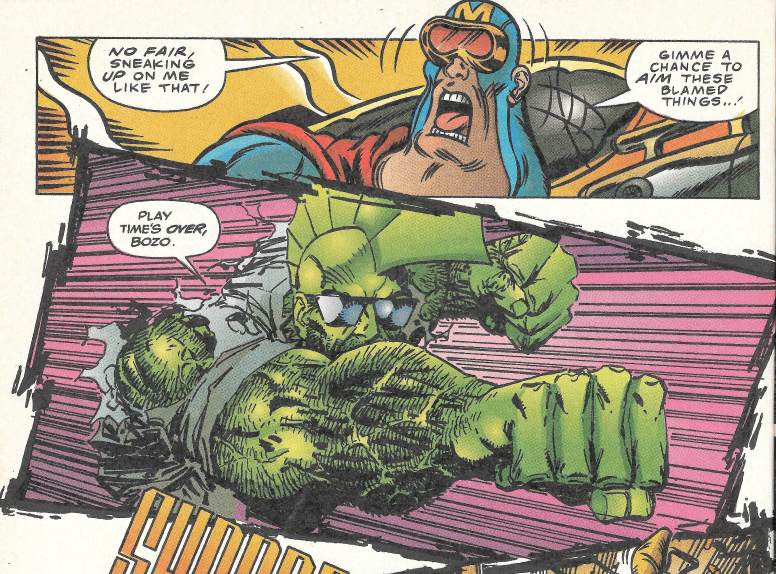 Well, at least one of the pair knows to take it on the lighter side. 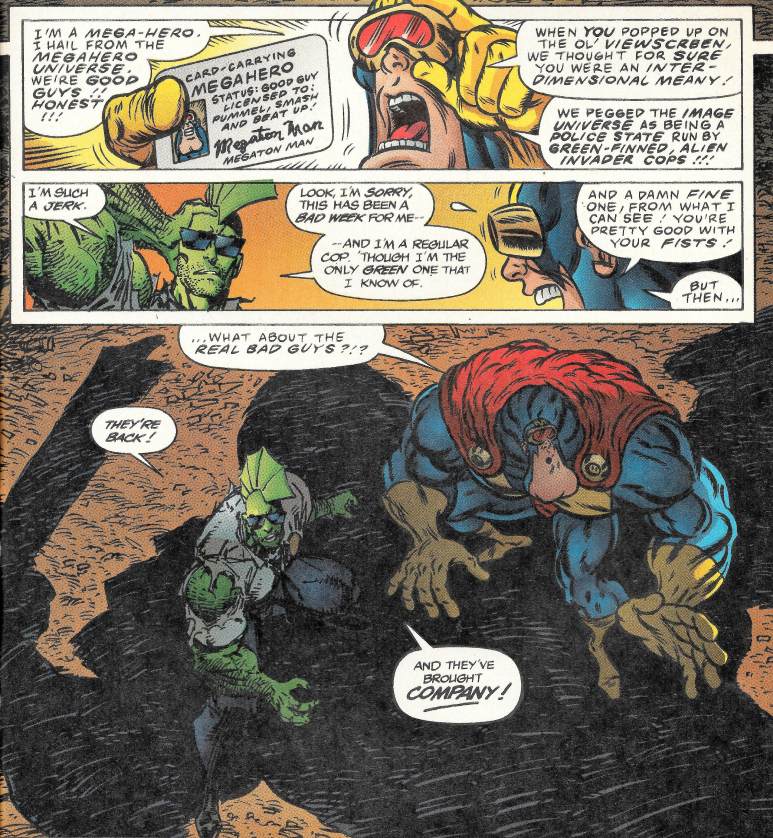 And with that final punch out, Megaton Man realizes they’ve been duped into fighting one another and he convinces the Dragon in short order. Unfortunately, it may be a tad late. 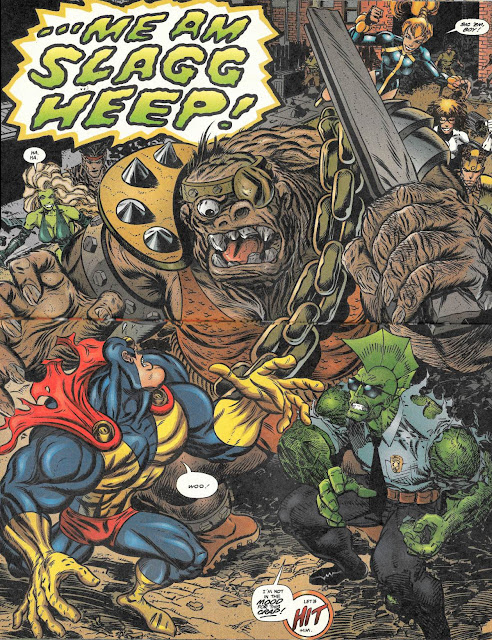 So wonderfully rendered that it ought to end up on a few kid’s walls as poster art.

Also, now that our heroes are into this togetherness thing, they ace the monster in short order…right on top of the villains. 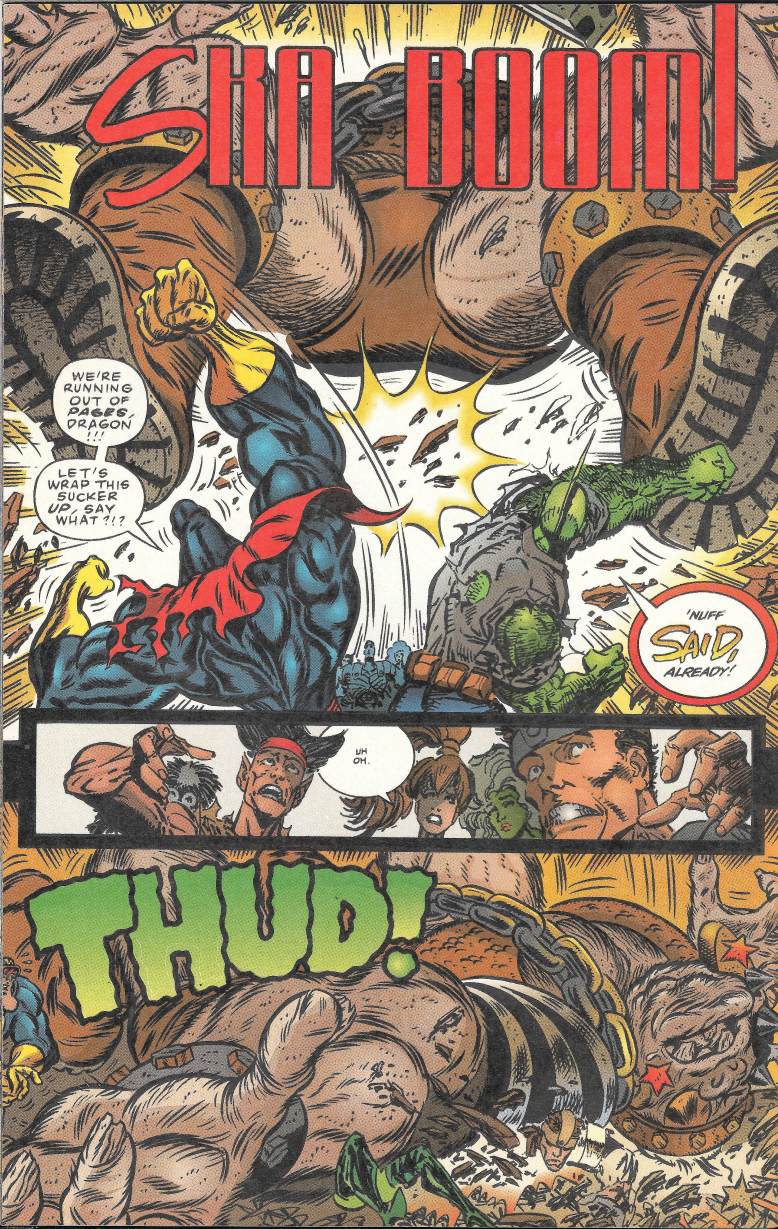 And with that, Megaton Man’s buddies show up, throw a few quips and then speed off with him… 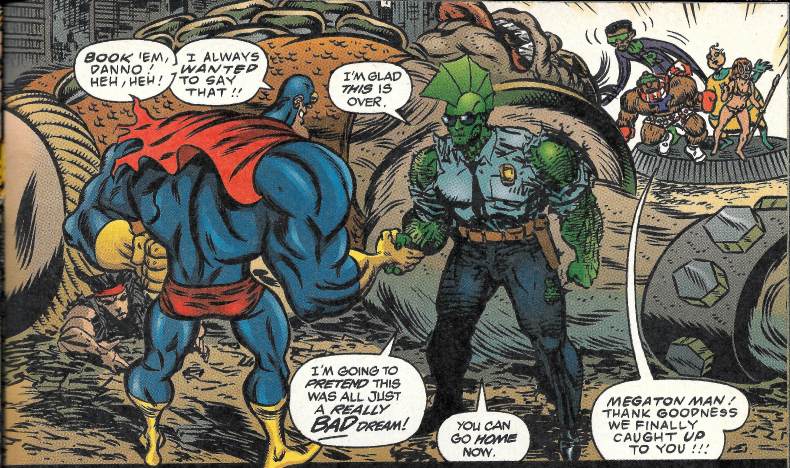 …leaving the Dragon with one final thought. 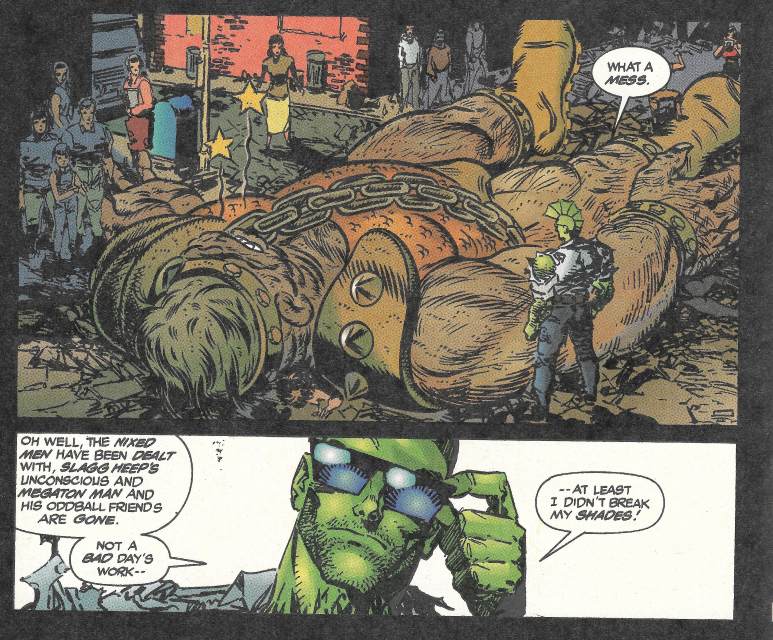 And that is that for a month of Strange Team-ups. We should do this again sometime. And perhaps we will…

But for now, it’s May and May is going to be something special.

Posted by SonOfCthulhu at 8:44 PM