The Twilight Zone : The Shadow #2 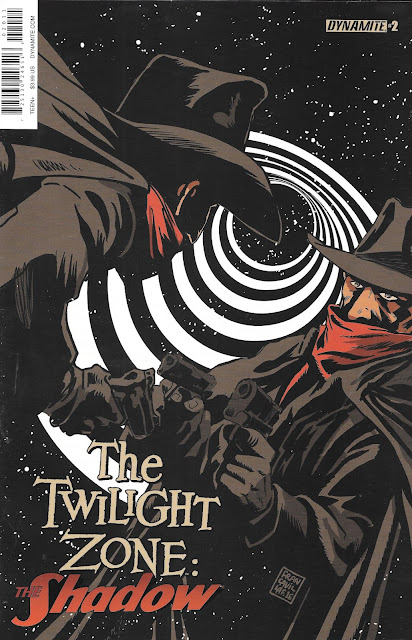 Shedding some light on a dark figure

Where were we last time?

Ah, yes. The Shadow had fallen into the Twilight Zone and it was taking him on a tour of other people’s lives in hopes of reigniting the humanity deep in the heart of crime-buster. After tooling around in the body of his alter-ego Kent Allard, The Shadow next finds himself "leapt" into Preston Springs, who in this piece is “The Voice of the Shadow.” 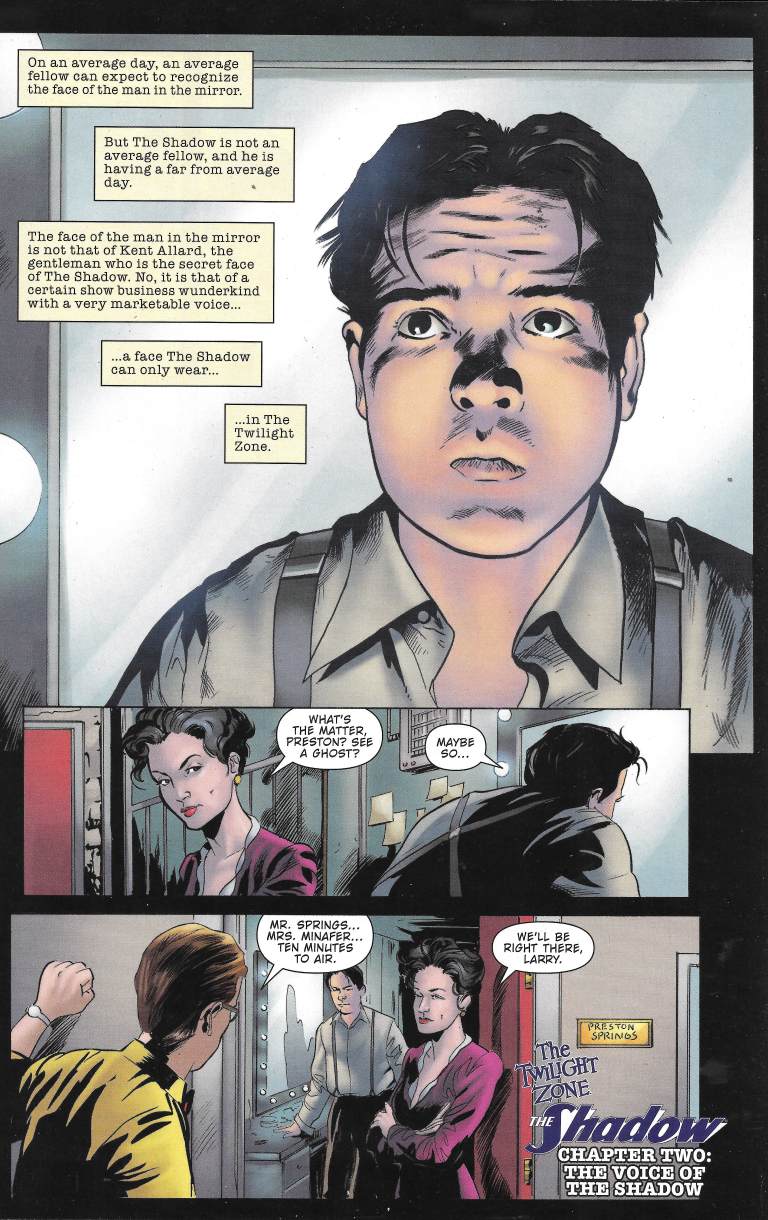 We spend a moment with Preston/Shadow who explains a bit about why he’s acting odd to his co-star Madge Minafer. She agrees to go along with the gag although she states that his little game scares her a bit. 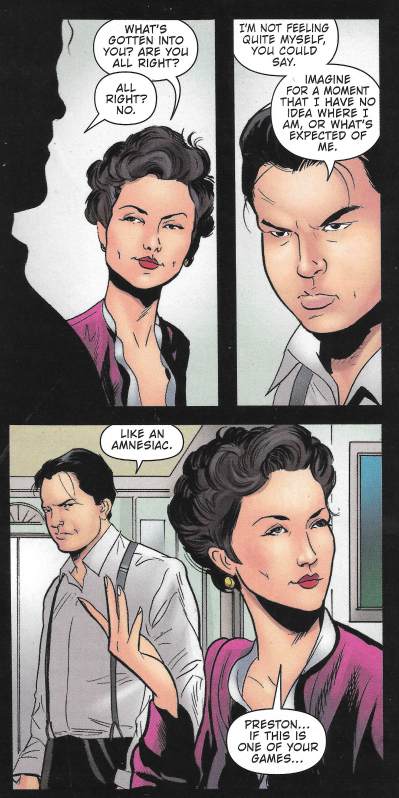 She gives Preston a bit of advice on what he’s expected to do and it is off to the studio for a live broadcast. 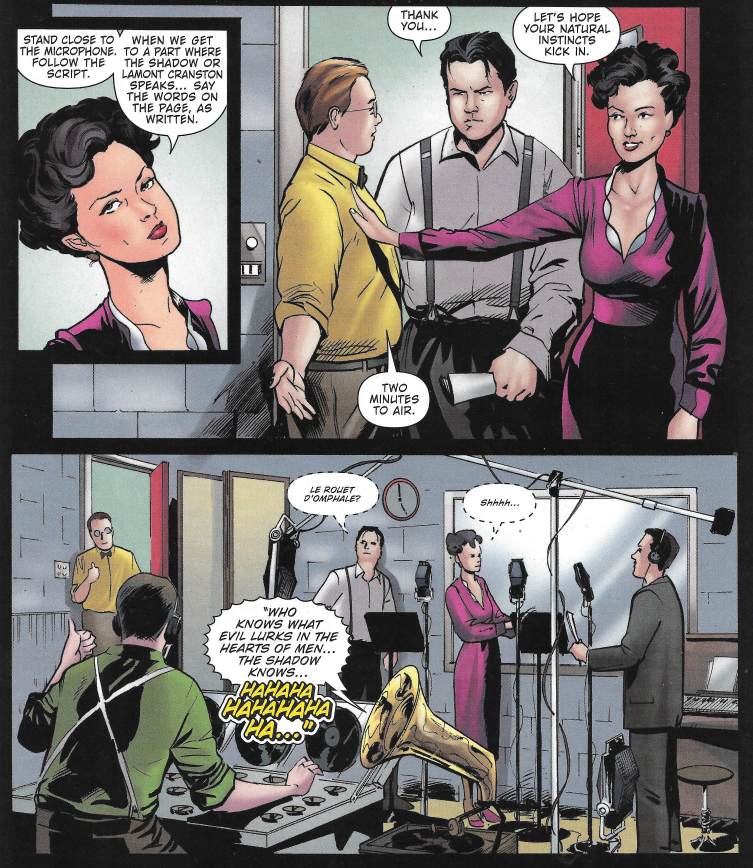 For the record, Frank Readick, Jr speaks the Shadow’s famous “Who knows what evil lurks in the hearts of men? The Shadow knows!” in most broadcasts. He replaced James La Curto, the original narrator. And we’ll see his contribution as a recorded voice that opens the show.

The man most notably associated with The Shadow was or course Orson Wells who played the voice of Lamont Cranston for over a year. Following Wells were Bill Johnstone, Brett Morrison (who, at 10 years over two separate runs, holds the record for longest tenure with the character voice), John Archer and Steve Courtleigh. 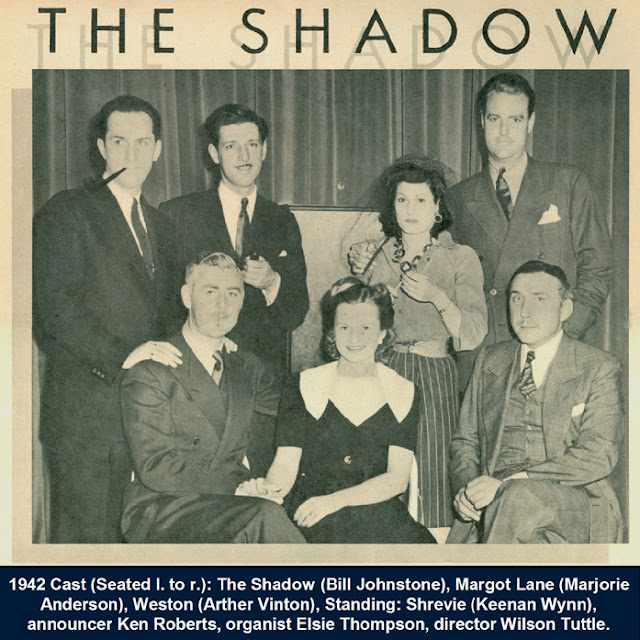 Here “Preston” seems to be an amalgam of some of these folks, and perhaps a nod to the fact that actors in the radio dramas of the 1930’s-40’s rarely received credit. There are some scenes that evoke Wells more than anyone. Perhaps Wells’ estate prevented Dynamite from using his name? Who knows.

What we do know is that after a brief bit of hesitation, Preston/Shadow is a natural at this radio drama stuff. 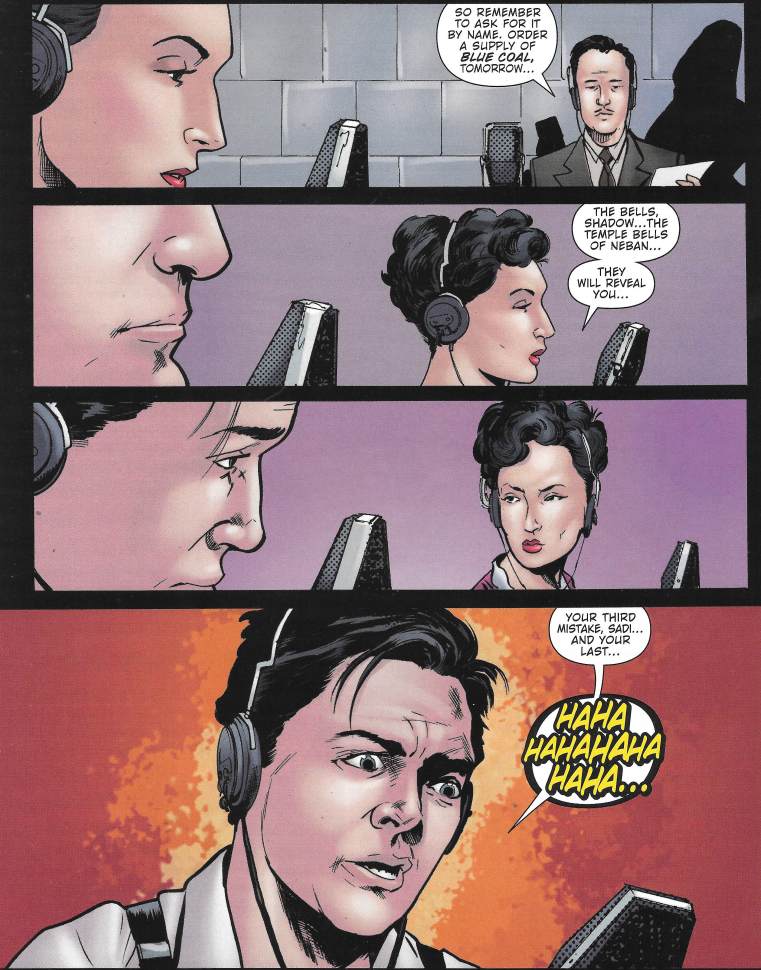 Even if he’s a bit miffed at the announcer’s disclaimer about the fictional nature of the characters in the production and the amount of laughter attributed to his alter ego. 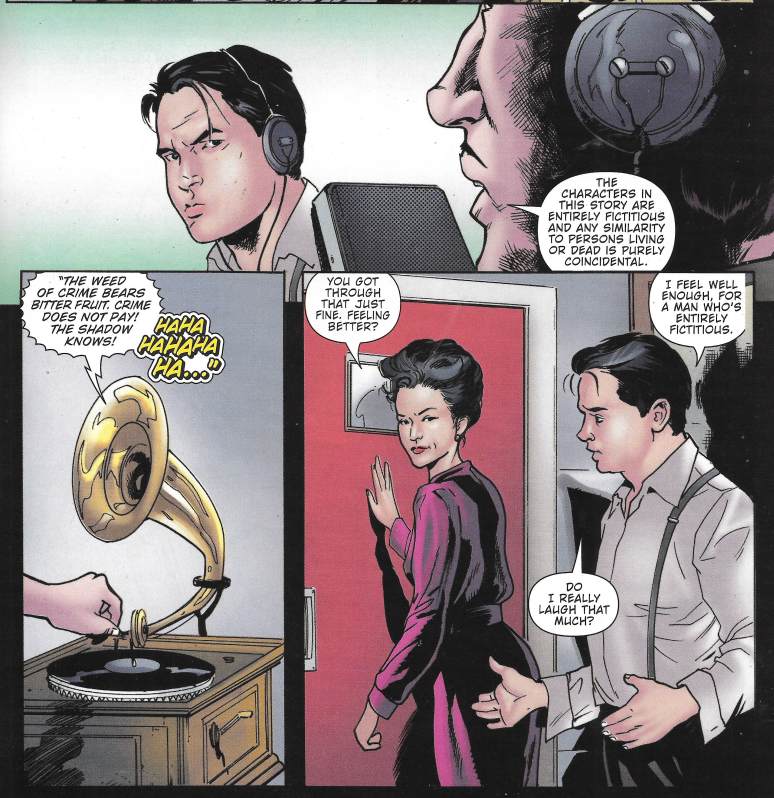 Madge continues the conversation with Preston/Shadow, being just as intrigued with his conviction that he is part Allard/Shadow now. And as they enter their dressing room, two people seem to confirm Preston’s dual identity. 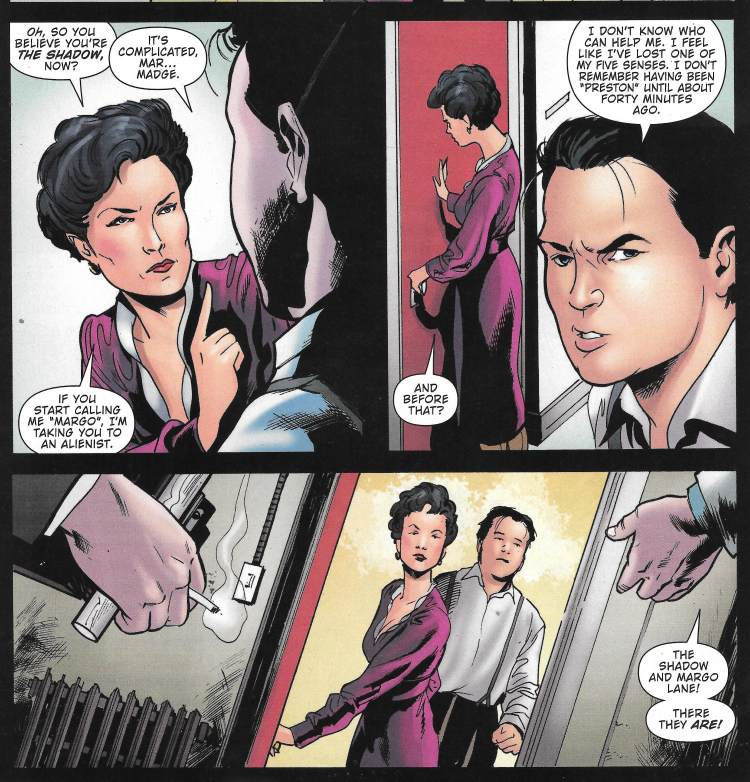 Only for us to find out it’s the studio heads who have invaded their dressing area to throw a cape over Preston for a quick publicity shot. 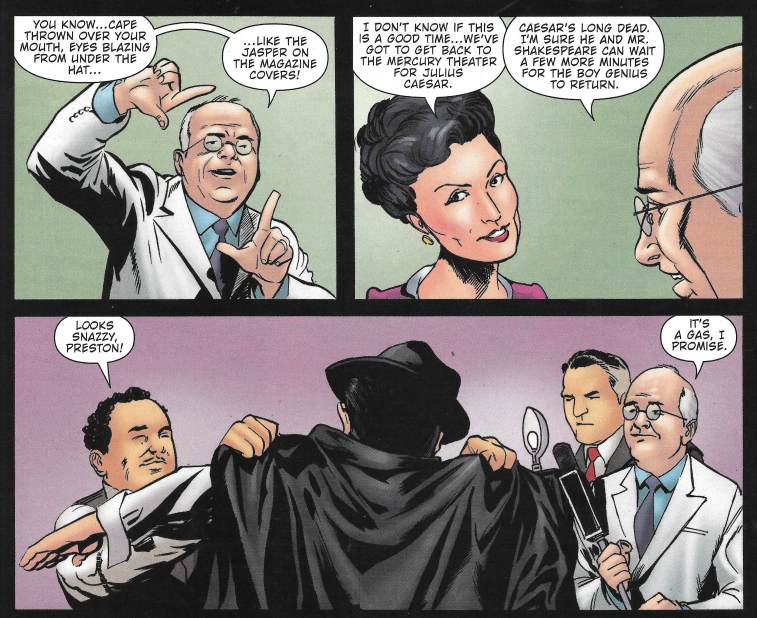 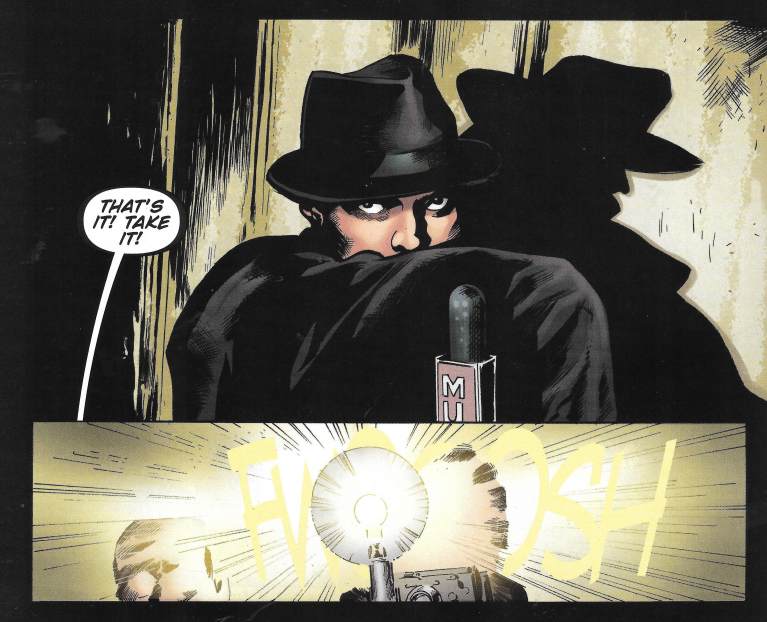 …looks quite a bit like the one Wells did when he played the voice of Cranston. 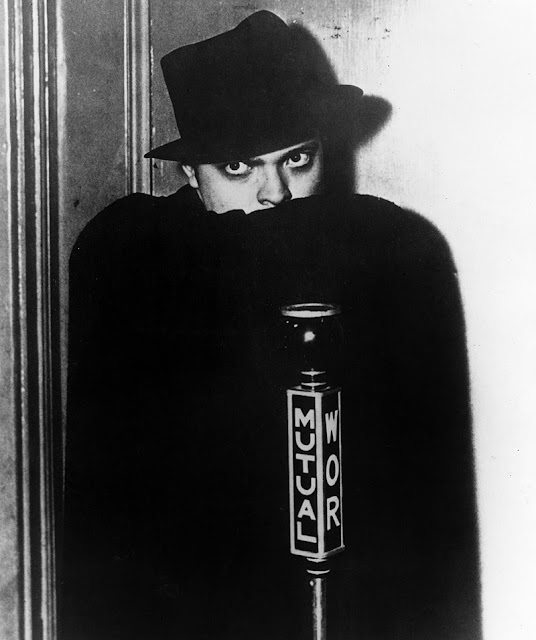 They leave Preston/Shadow with the cape and he shares a laugh with Madge over the size of the hat. 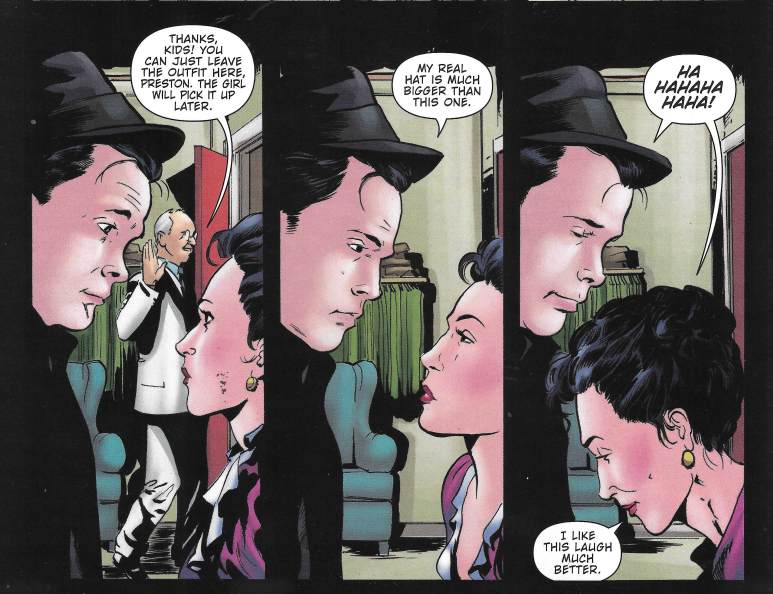 Which becomes something of a running joke as Preston/Shadow continues to insist Madge believe him that he’s the actual Shadow. There’s a nice dig here that only the radio version of the Shadow had powers like invisibility and the power to cloud men’s minds. He was much more grounded in the pulps, which appears to be where the book draws some of the character from. Comics and the movie version Shadow had a much more mystical side to them. 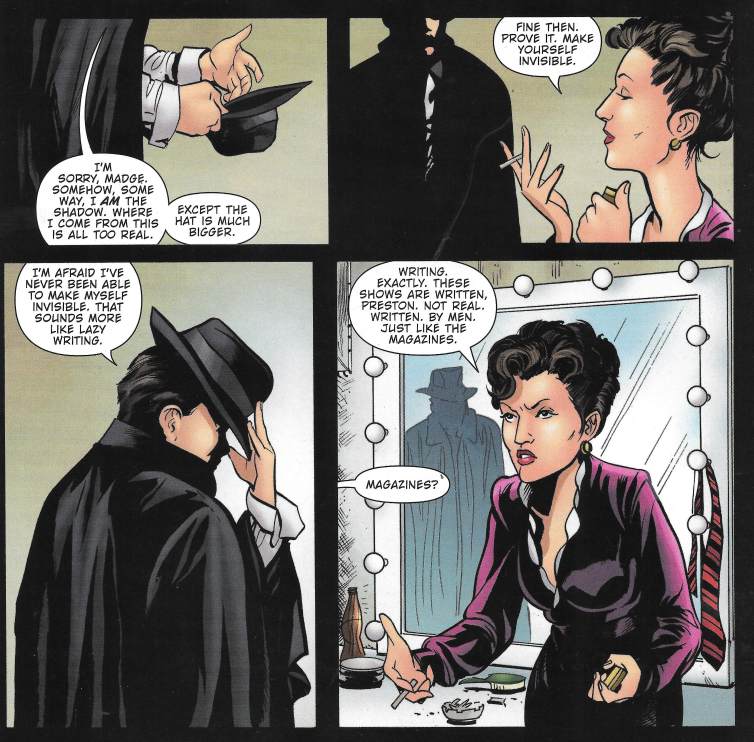 Madge mentions The Shadow is in magazines, so a quick trip around the corner… 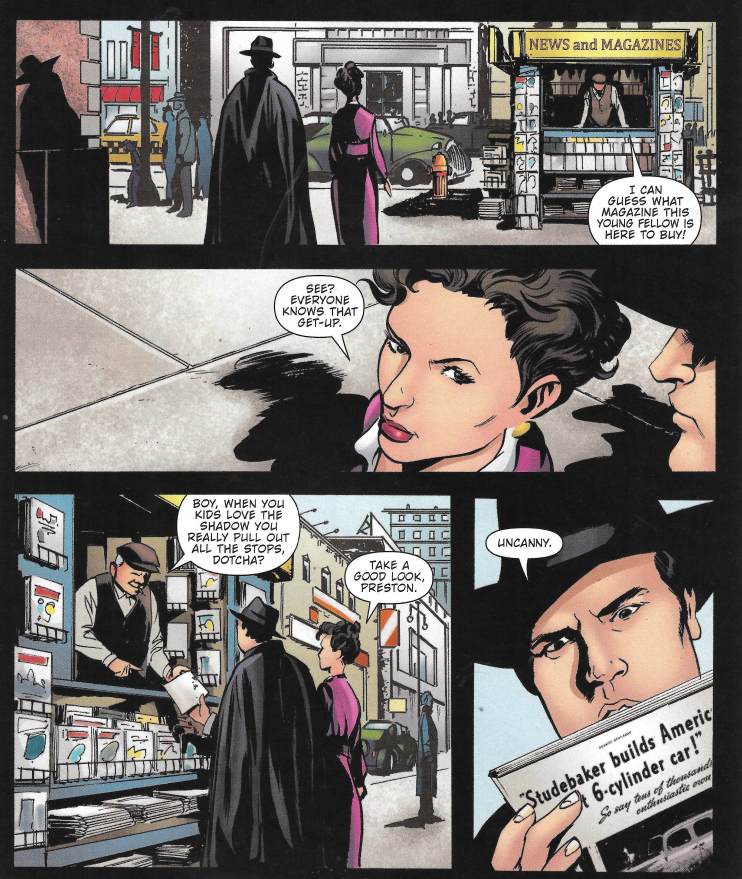 …and Preston/Shadow confronts the fact that his identity is nothing more than a story in a dime pulp magazine. 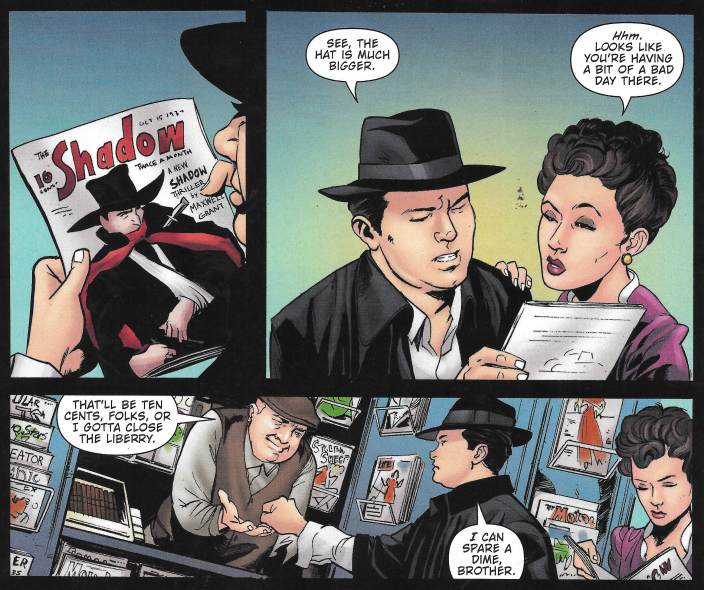 It unnerves Preston/Shadow quite a bit. So, he recounts for Madge the origin of the Shadow, which is a neat little aside to put in. In all, I applaud the manner in which story elements are introduced in this series. Something that sounds so silly from the beginning, works out in an entertaining tale. 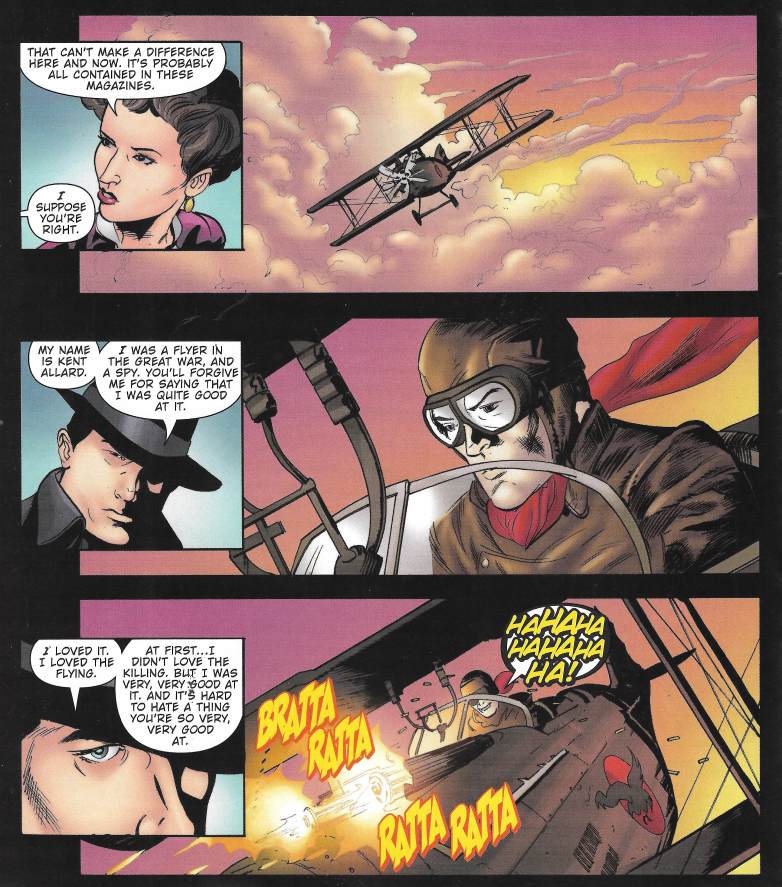 A tale that shows how the Shadow became the merciless killing machine from his experiences in the war, and in a manner that has Madge cursing Preston as goddamn convincing. 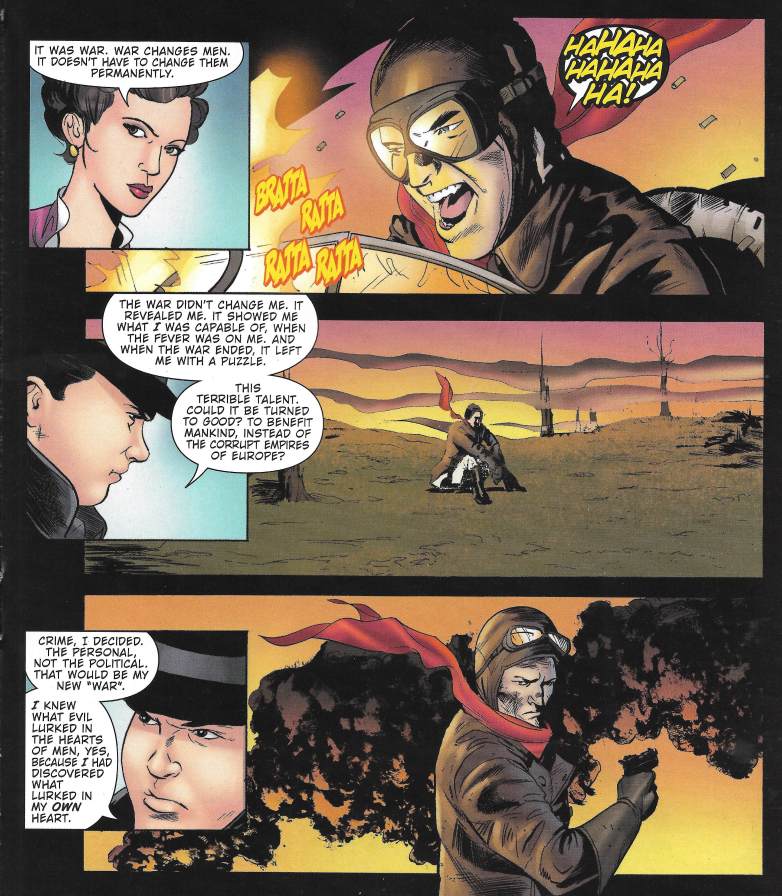 And herein is the heart of this tale: can the Shadow learn to mete his justice with a bit more compassion. 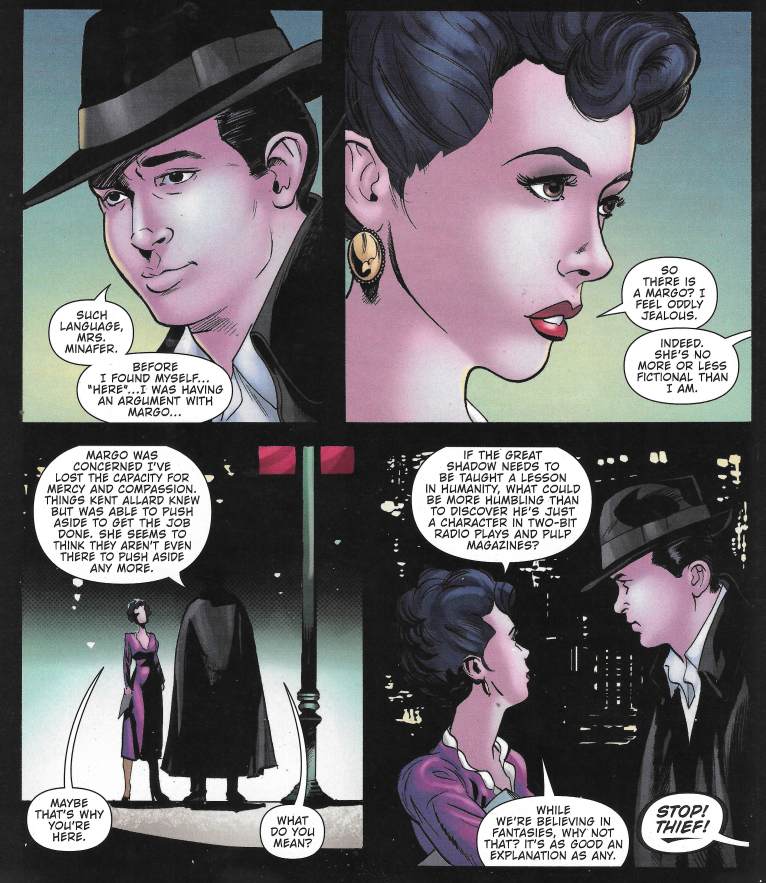 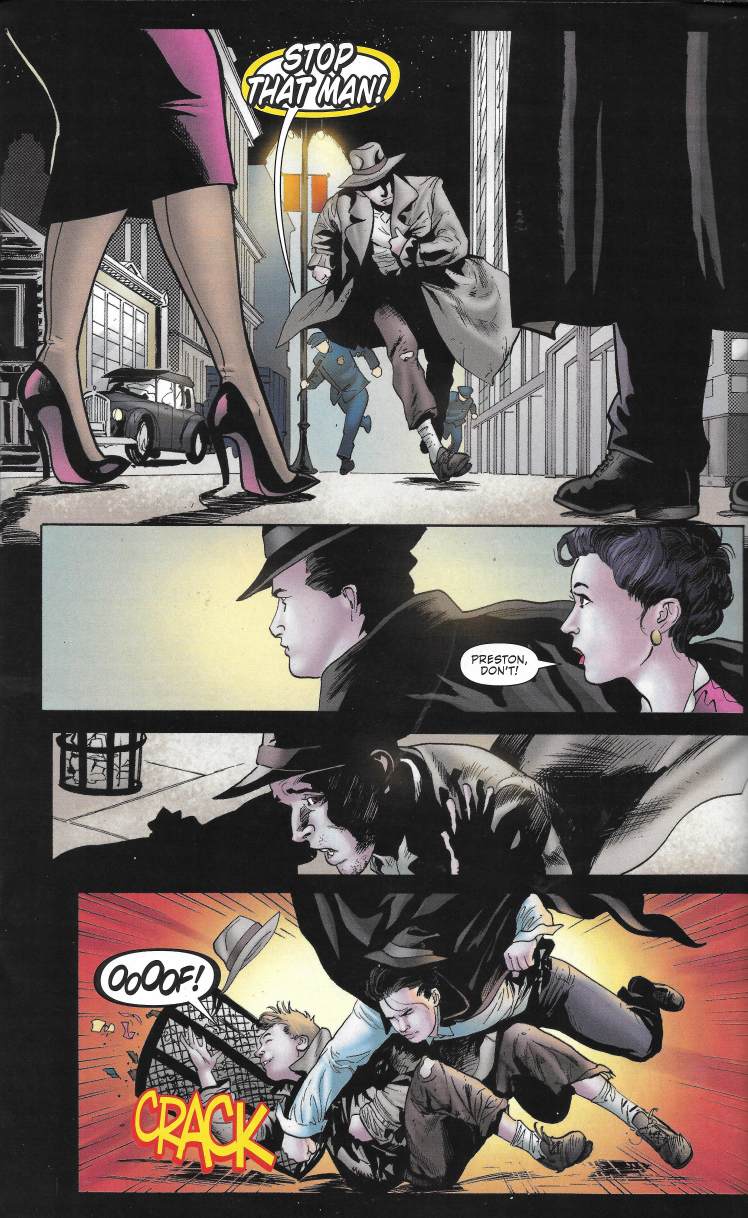 …and is faced with this thief, which results in an act that proves he may be more Shadow than Preston.

It becomes apparent that our perpetrator was only trying to steal a loaf of bread. Preston gets verbal jab from the policeman followed by… 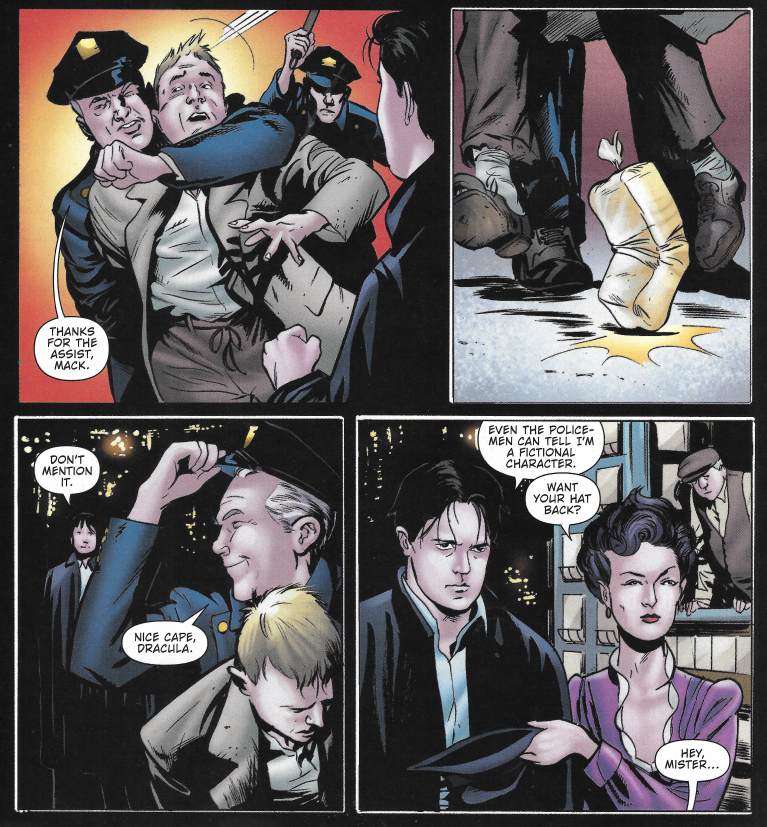 …some hero worship from this youngster, who asks if Preston is The Shadow. He has an even deeper question too… 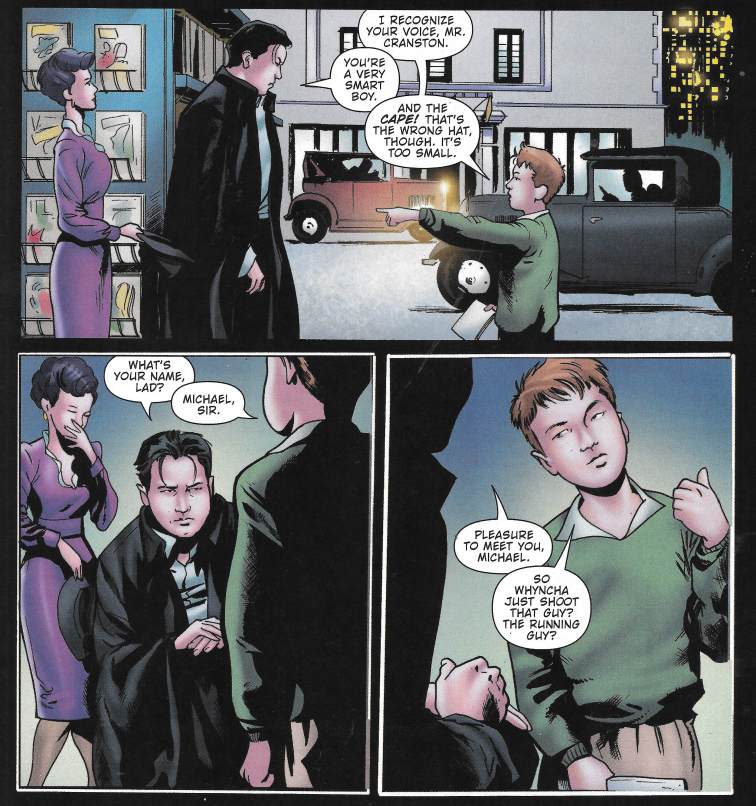 Which gives Preston/Shadow a chance to wrestle with the true question the series wants to ask. 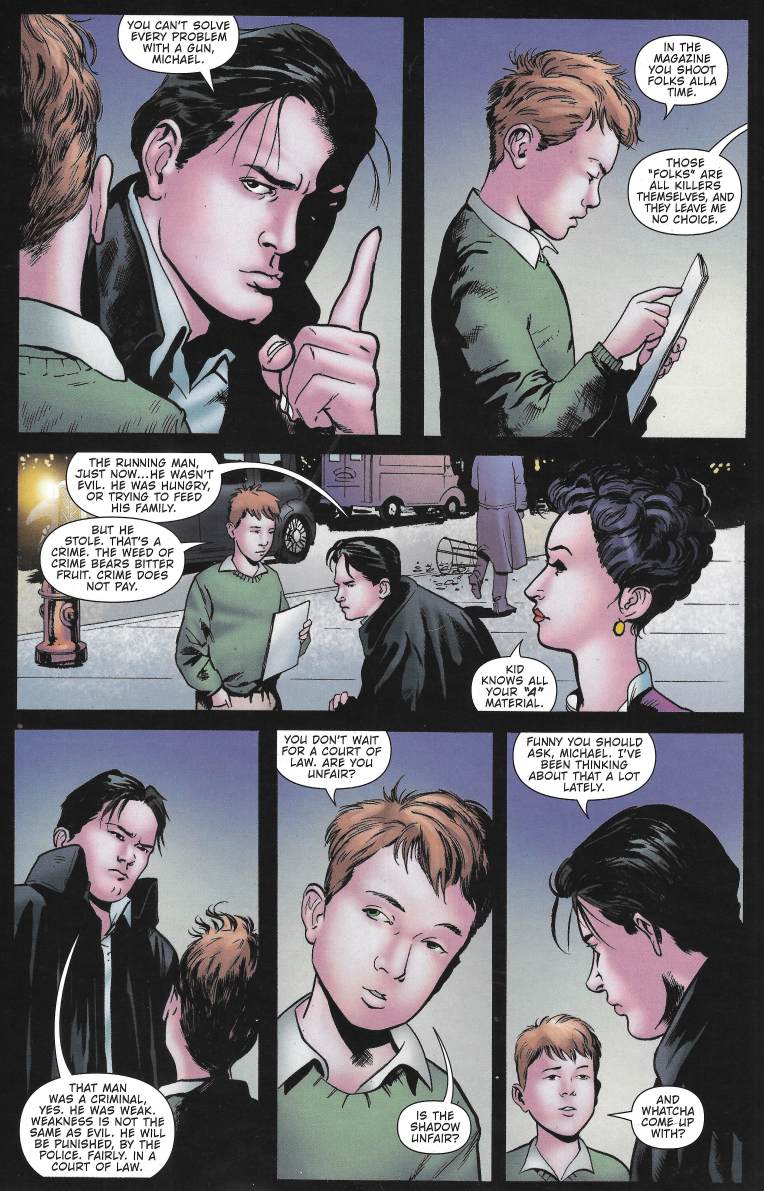 Okay, so in a page we get some nuggets of philosophy and a lot to chew over. The book delivers on the T-Zone’s moral conundrums couched in the middle of intriguing stories about people we grow to care for. It makes sense too that after so many years The Shadow might have a crisis of conscience. All of this feels authentic to the tone of both series. As to what Preston has come up with… 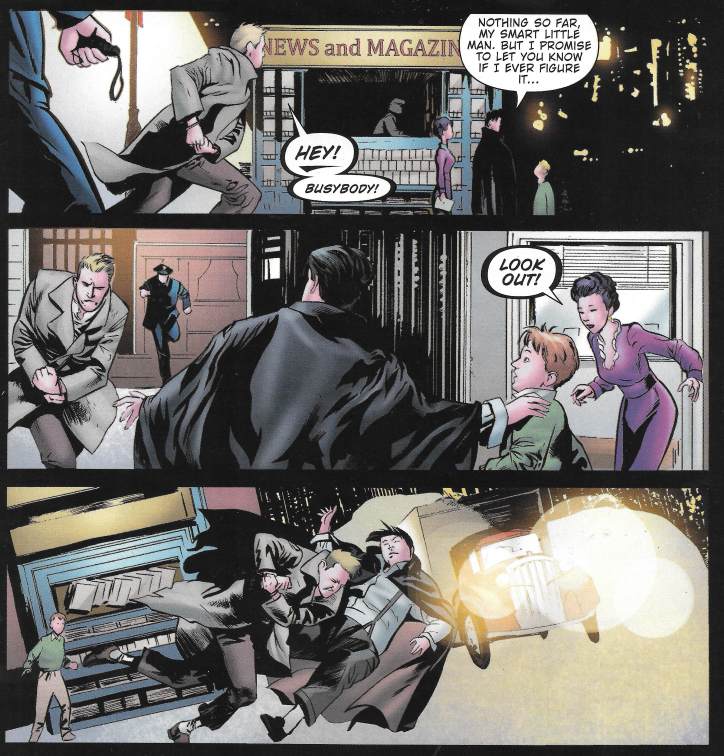 …Well, you didn’t think they’d give it away in issue number two of a four issue series, did you?

No, instead Preston/Shadow and the escaping thief fall under the wheels of a speeding truck. 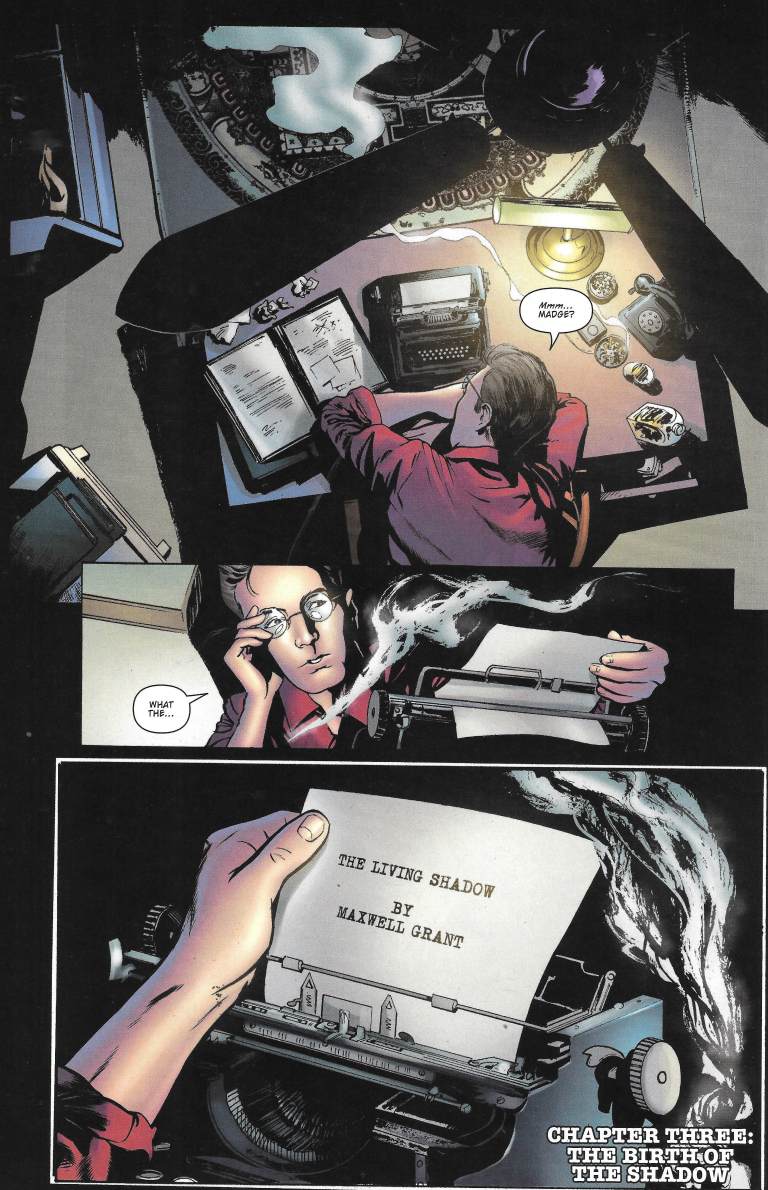 …the body of Maxwell Grant, the pen name of the Shadow’s creator and his most prolific writer in the pulps: Walter B. Gibson. Where this mind swap will take him, only the next issue knows for sure.

We’ll take that up for another time, as I feel the need to move out of the zone for a bit. Next time our strange team-up will showcase LOTS of familiar faces.
Posted by SonOfCthulhu at 3:44 AM