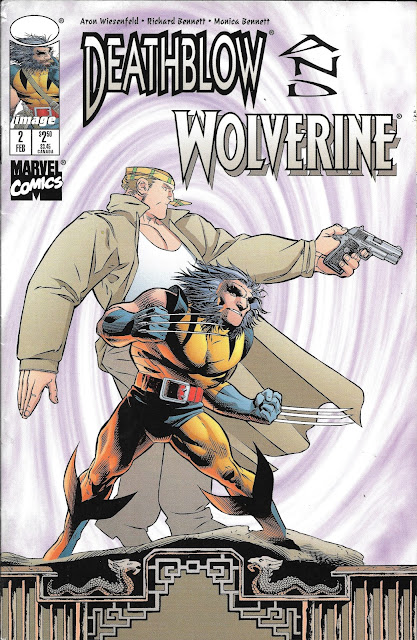 This is a rather strange one, and not just because the Letterer is the Editor, either.

It’s strange because it is supposed to be a team up between that feisty ball of marketing and claws, Wolverine…ole mister “best he is at what he does, and what he does makes Marvel a bunch of money”…and the Wildstorm/Image character Deathblow, a guy I know absolutely zero about.

And after reading this entire book (twice), I still know absolutely ZERO about.

Because Deathblow doesn’t show up in this issue. Oh, I mean yeah there are some panels where he is drawn in frame, but he doesn’t DO anything to advance the plot or make any difference in its outcome. He has the personality of a generic action hero and he must have recounted his origin story in issue one, if the book even gave him time for one.

Near as I can tell from his bio on Wikipedia, Deathblow has a combo of Wolverine and Punisher’s power sets: he regenerates, and he owns a lot of weapons that he’s proficient in. He was part of Wildstorm’s ill-fated army Special Forces division called Team 7, a happy little troop that was used by our government to test exposure to the Gen Factor enhancement process developed by Miles Carven. Everyone ended up with powers (or dead), but Michael Cray/Deathblow’s didn’t develop until years later. Now he regenerates and he kills lots of bad people.

So basically, Wolverine with guns.

In truth, he’s not NEEDED here, as writer/breakdown guy Aron Wiesenfeld has drummed up a tale that only needs Wolverine. Although the version of Wolverine he is channeling for this tale is the same one Chris Claremont / Frank Miller used in his self-titled mini-series back in 1982. You know, the mostly feral one who only existed to be a loser at love and fight ninjas and shit. That is exactly the one we get here.

Although it doesn’t start out looking that way…

We begin the book with this amazing double-page spread of Wolverine confronting some odd grinning man in an oversized stove-pipe hat while Deathblow does what he does for a majority of this book: stand around looking slightly disinterested. For some story context, this is the apartment of Wolverine’s girlfriend, who is missing of course, and it looks like the weirdo pictured here has trashed the place. Since Wolverine has popped his claws I can only assume things are about to get crunk up in this beotch.

Sorry, that last bit was me trying to keep the Crapbox “hip” and “relevant” to today’s audience. I swear I won’t try it again. 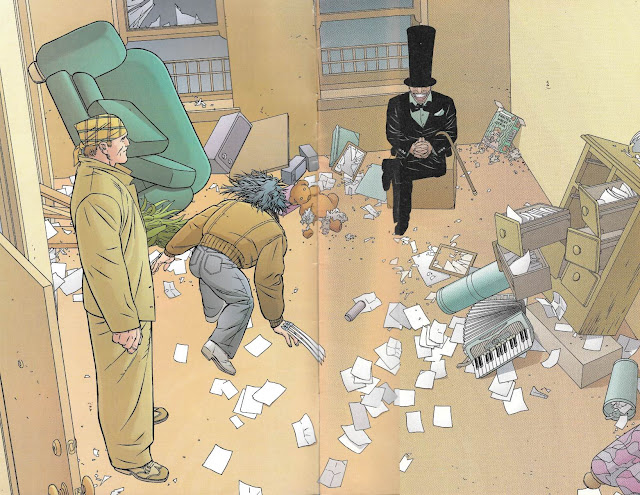 And I don’t have to assume long, as Wolvie turns Asian Abe Lincoln into a Summer Sausage tray in a display that has be check to see if the cover has a “Intended for Mature Audiences” sticker. 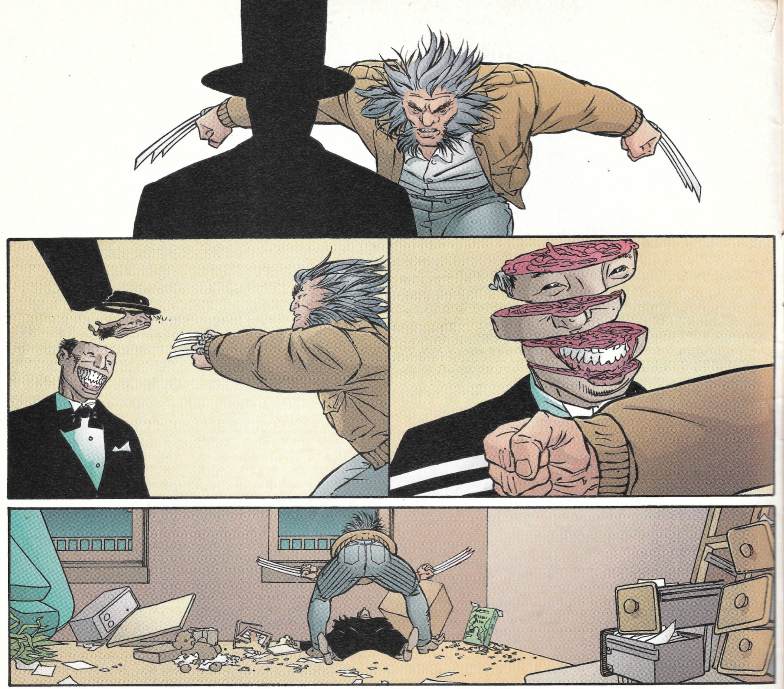 Yee-ouch! It’s no biggie as our ghoulish grinning guy turns up floating behind a VERY oddly faced Logan and explains the plot of the book (for those of us who missed issue one of this two-part thing). Logan is looking for his girlfriend who has been stolen by someone. The gravity defying dude delivering this message is an emissary of The Librarian, who wants to help Logan find her. 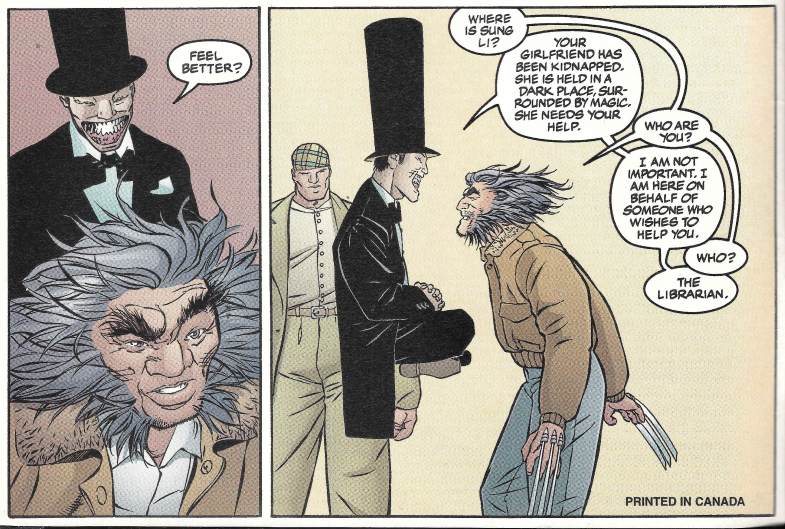 For a price, of course.

Deathblow must have missed last issue too and he speaks one of his half dozen lines, asking what’s going on. Thanks for the assist DB.

And Logan explains what his girlfriend has told him about The Librarian, an ultrapowerful being that sounds magical enough to do his own dirty work. 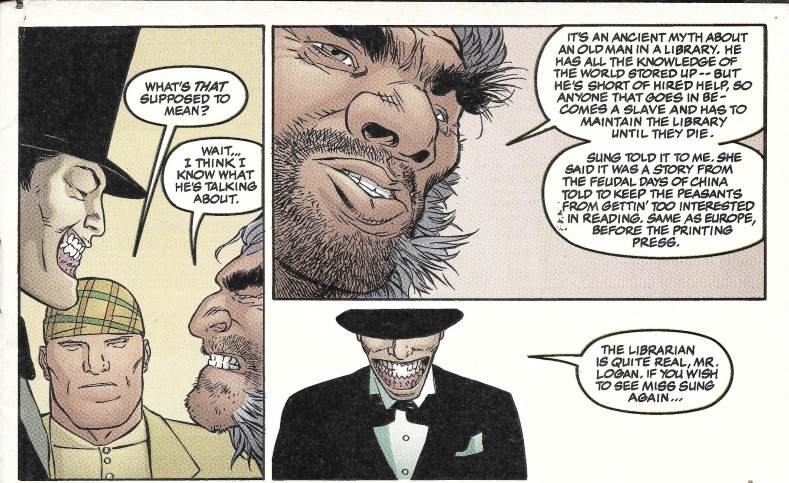 To find out the info they seek on Sung Li's whereabouts, they take a trip to see this Librarian character. A trip where the mode of travel is “time tunnel distortion swirly.”

They arrive in the middle of a massive library where dozens of faceless workers scuttle about cleaning up ancient texts. Logan tries to make small talk… 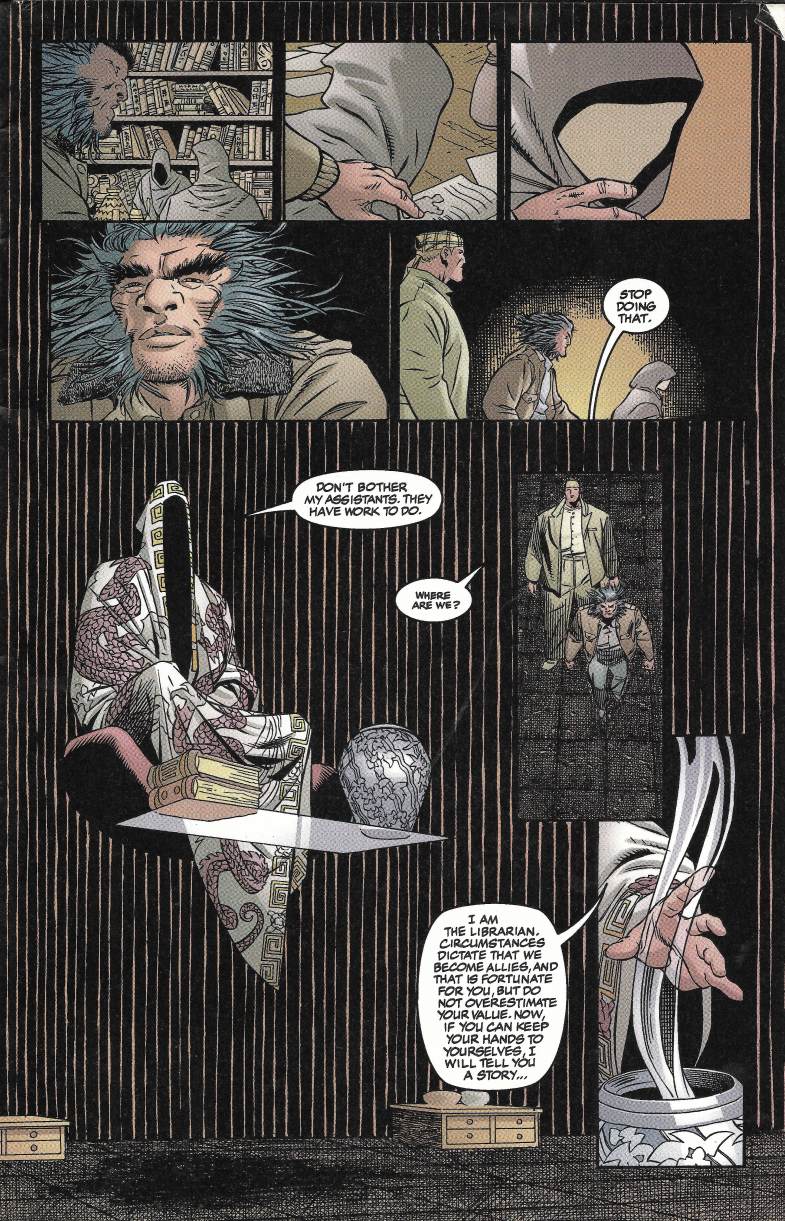 …but you can’t do that with people who don’t have mouths. Instead they meet the Librarian, a floating spirit who rules this dimensional land of books. He has a job for them, which he tells them in the form of a story.

Seems there was once this race of flying Chinese supermen who were about to rule all the Earth and then something bad happen to them and they all got stuck in a jar before they could dominate all the human race. The supermen sealed their essences inside a jar to escape this horrible bad thing that was going to happen and …yadda, yadda, yadda…evil cult to bring them back…yadda, yadda, yadda…Wolvie’s girlfriend is the key to releasing their souls, whereby they will take over the bodies of everyone in the city of San Fransisco and conquer the world.

So, would you two help a all powerful and morally ambiguous mystical floating brother out by putting this Airwick…er, magical coin thing on the jar holding their souls thereby saving humanity from being enslaved while at the same time rescuing your girlfriend? 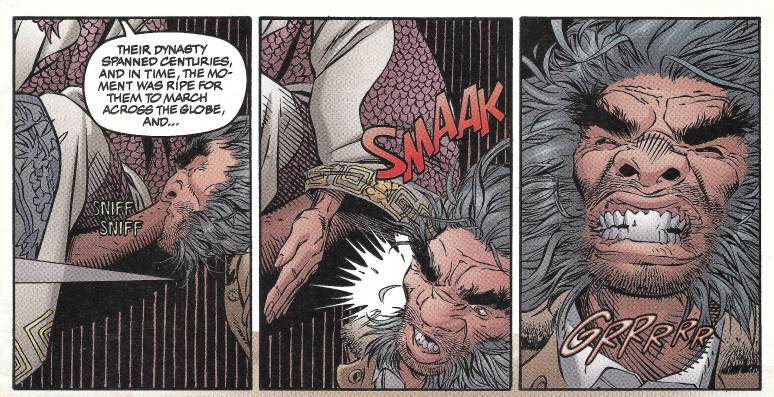 So of course our heroes say “yes, we get that the evil cult must be stopped and it’s plain to see the Librarian’s only power is to take people’s faces away and make them his eternal slaves…and…” wait, that’s actually pretty flipping powerful. Why does he need help again? 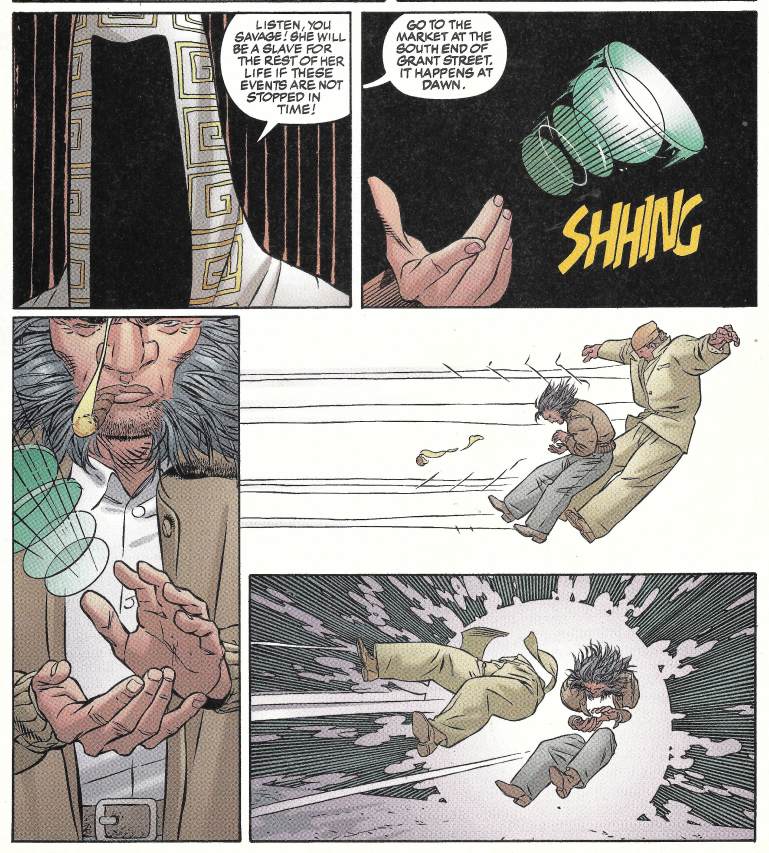 Something, something …the physical powers that guard the urn are way too powerful and we need a reason for this comic to exist. Right! Got itl And with that The Librarian tells them Logan’s girlfriend is in for a horrible fate if they don’t succeed aside from the fact that human civilization will be destroyed and that convinces them. So he slips them the green pine scented air wick that destroys jars of Chinese warrior souls and off through the portal they are shoved backward.

They end up back at Logan’s girlfriend’s apartment, where the runt pries open a hidden weapon cache and tells Deathblow that he can blow if he wants to, which earns him the reply of… 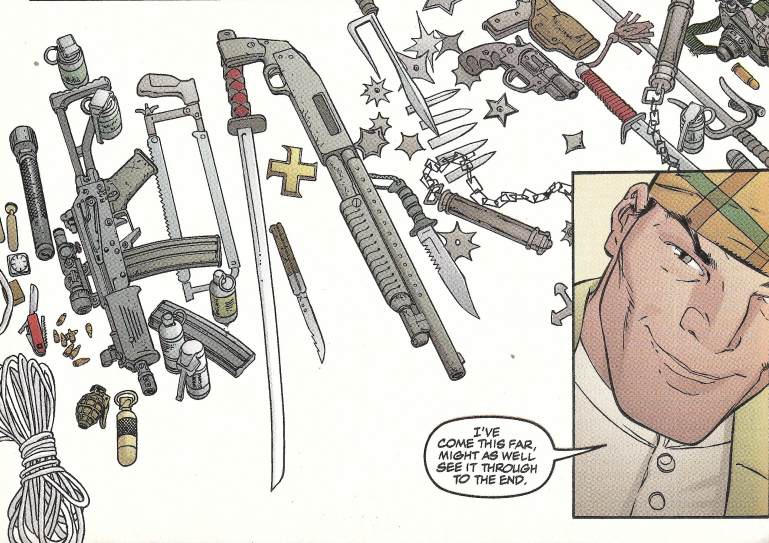 …and with that Deathblow gets all gussied up in his “Gun-day” finest. 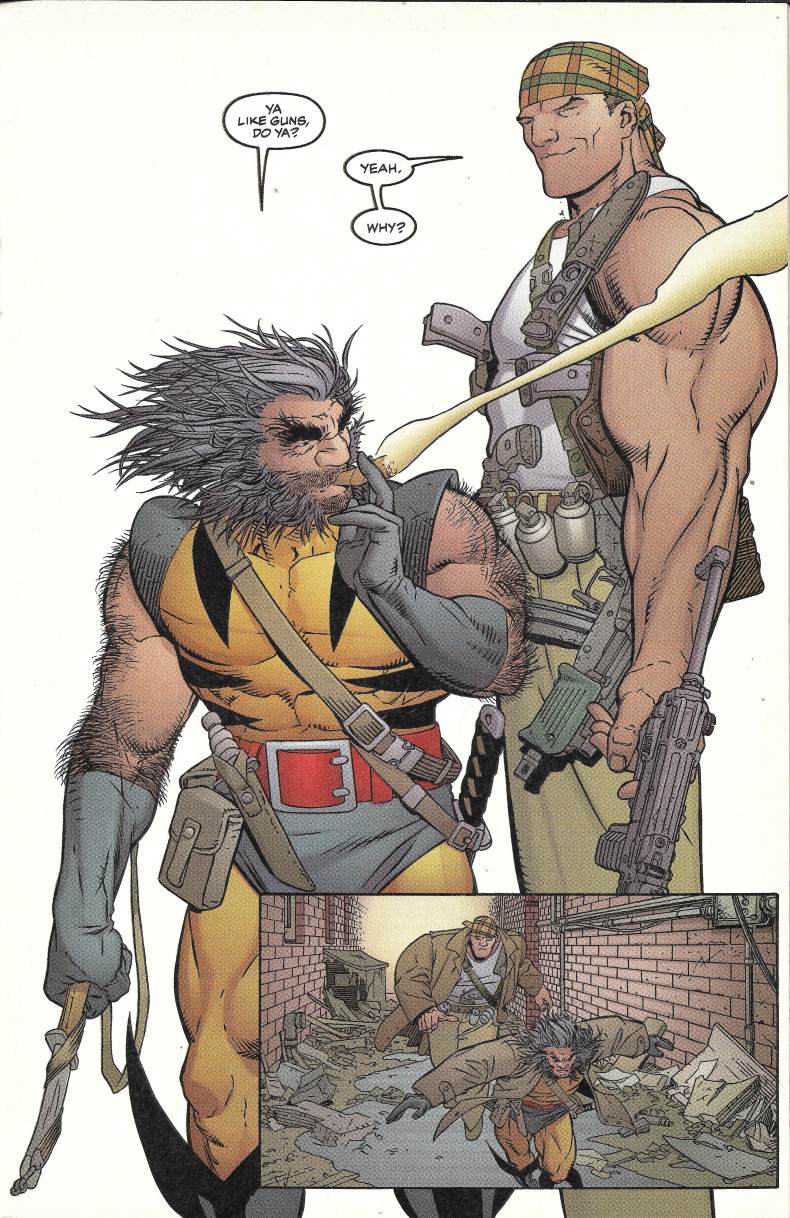 …and they make off to take down the cult set on bringing back the superpowered spirits of a hundred thousand dead conquerors. They reach the market and decide to split up, because even just one of them is suspicious enough looking. 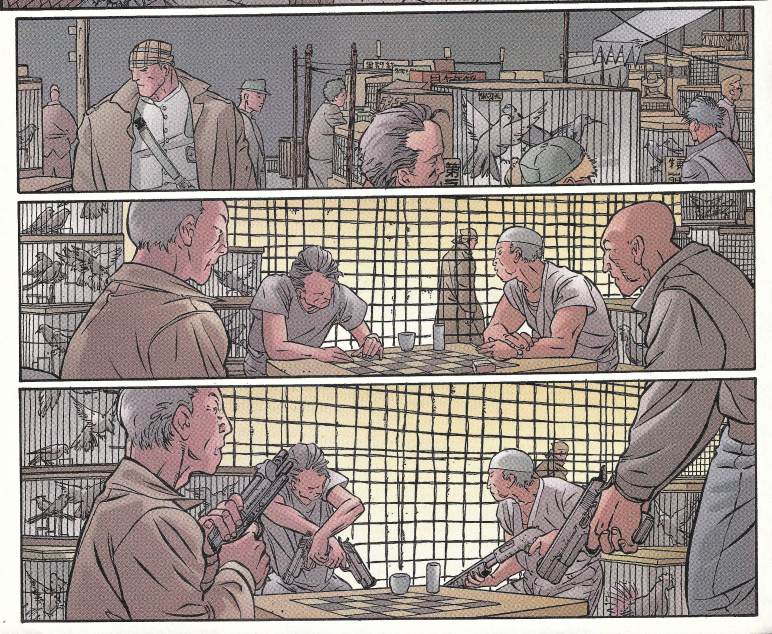 If you don’t believe me, just watch these guys make the 300 lbs of trained killer that is Deathblow out in about two seconds flat.

Not that it matters, these guys seem to only be able to hit EVERYONE BUT Deathblow. And as for the regenerating merc, he’s got some moves like I’ve never seen before. No, seriously. What school of weapons training says kick your legs up like Jane Fonda off the cover of her aerobics workout VHS cover, then roll over on your nose like you’re breakdancing and end up shooting with your bottom half twisted in the opposite direction? Because that is some training no one should learn. 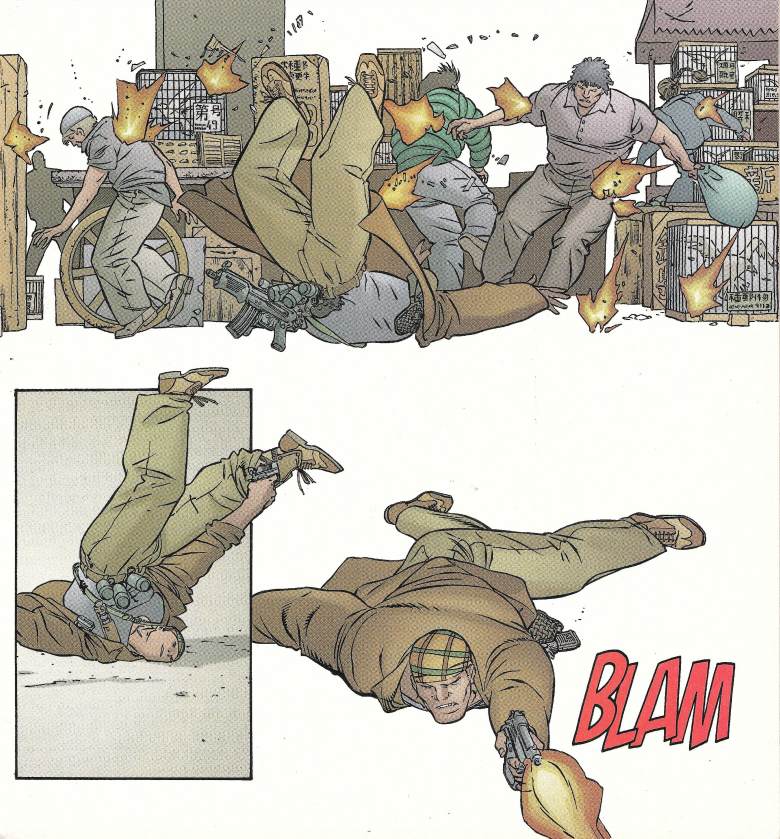 Deathblow lives up to the first part of his name by death "blowing" these guys away and then spends the rest of the book walking around watching Logan gut, stab and pierce everyone else, mostly with their own weapons. 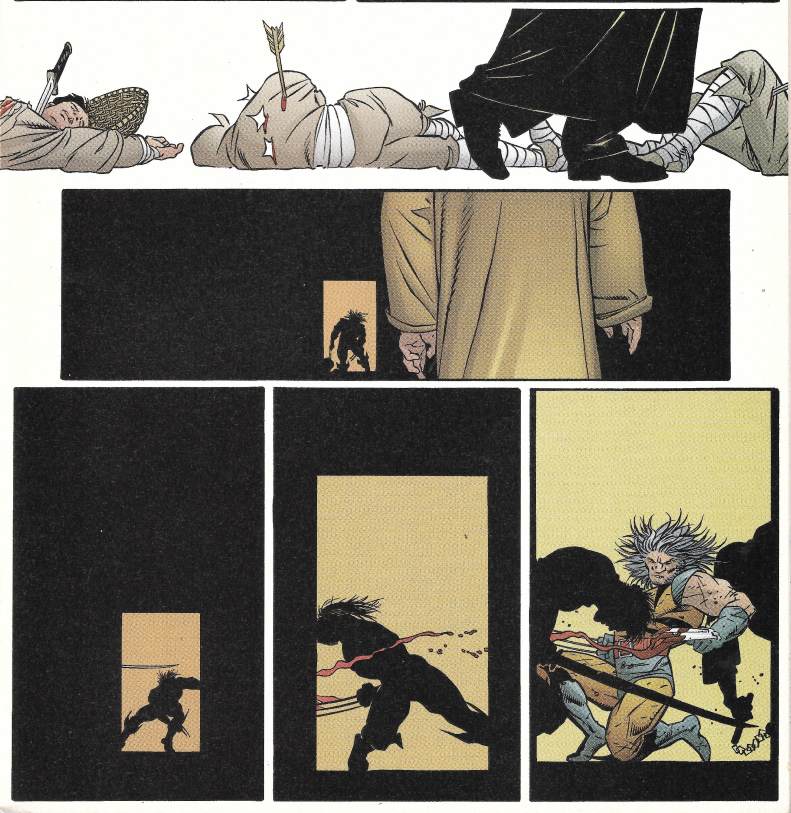 Cray comes up behind Wolvie and almost earns a face full of claws. Logan says he’s discovered Sung Li’s scent and he takes off for the warehouse floor below. He rounds the corner to find four bearers carrying an elder on their shoulders…and he kills them all…then Deathblow shows up, but he’s a mystic using magic to look like Deathblow, and Logan kills him too. More guys show up. Wolvie kills them. Some of the battle sequences are neat, but ultimately we are just wasting pagecount. There’s no real danger here for either of these guys. 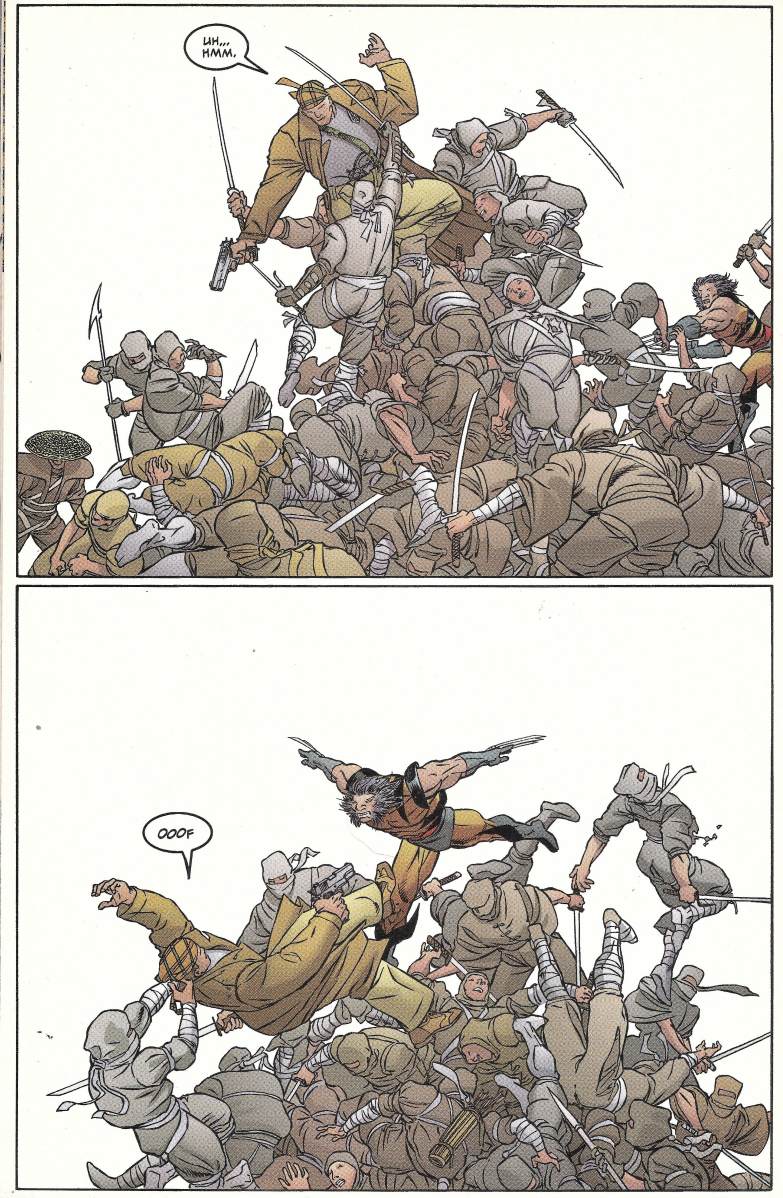 Finally, Logan finds the jar and Deathblow. They battle ninjas for a bit and then Wolvie applies the air freshener…and everyone can breath easy again! 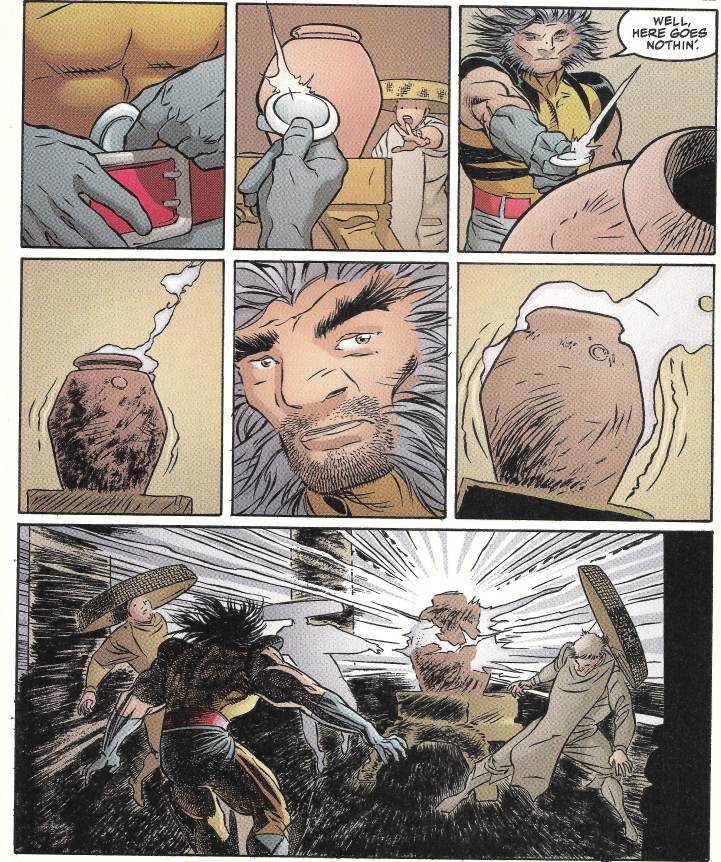 And as the smoke clears, Sung Li appears looking a little bit cockeyed. The trio head back to her apartment after a long day of ninja killing and world saving. 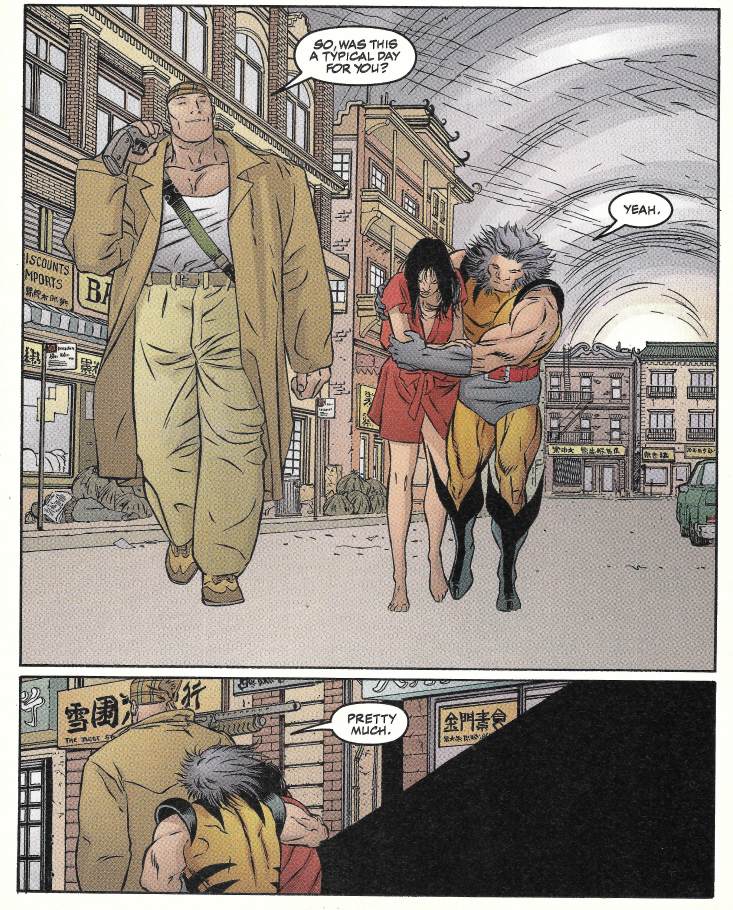 Logan and Cray part ways, back to their respective universes. Before they do though, Logan mentions that Sung is taking her whole “captive by evil ninjas bent on world domination because I’m some kind of mystical high priestess reincarnated” thing pretty much in stride. 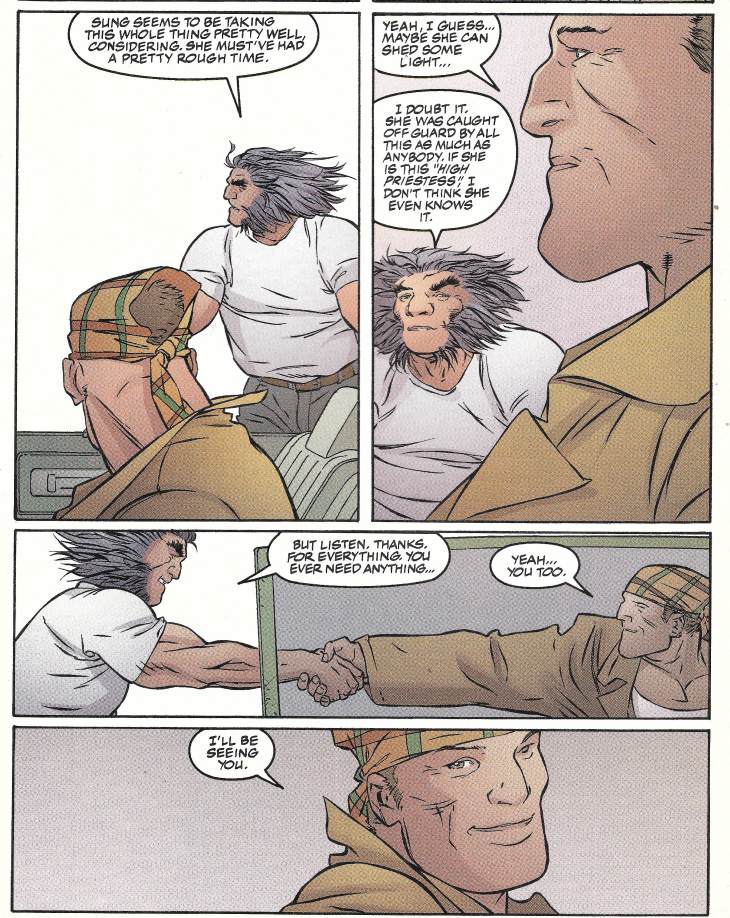 Then he goes back up to Sung and catches her with her closet door open. Hanging there is the robe the Librarian wore. Sung quickly covers it up. 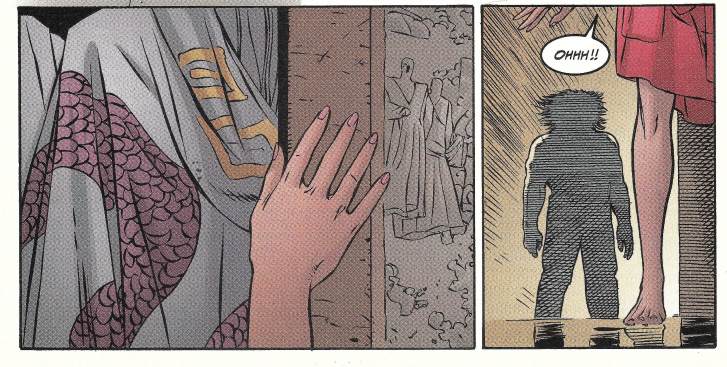 But it’s too late! Logan has seen it. He knows she is the Librarian…which implies a BUNCH of other stuff too, but the only thing Logan is upset about is that she lied to him. 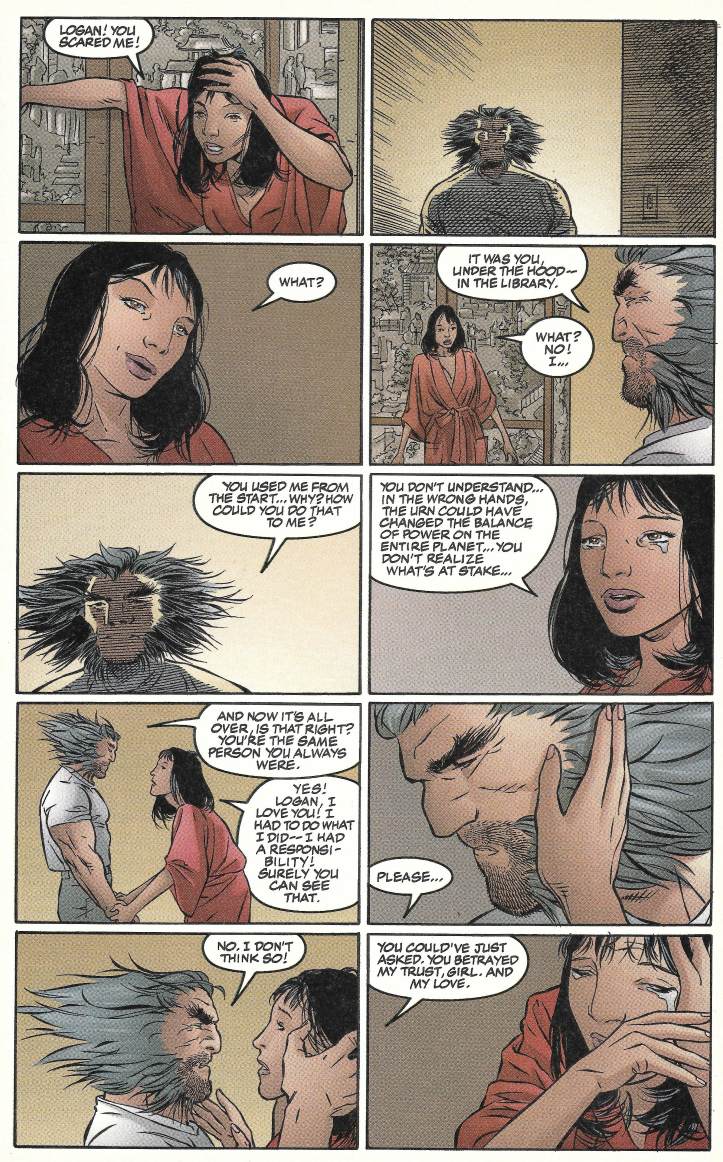 Wait, wait, wait! She actually loves him? I mean, if she is the Librarian, then she is an eternal being that has the power to take men’s faces and force them to live as slaves just for seeking her out, yet it is Logan she loves? Uh…

I have a problem with this story development. On many, many levels. And as the all-powerful, cosmic-level mystic crumples to the floor of her San Francisco loft to sob over her lost man, I feel this isn’t what would happen at all. I mean Logan might mean as much as a pet to someone like the Librarian. Even with his long life, he wouldn’t come near her lifespan. Not to mention she would have been setting up his part in this for a long time and basically lying to him at every turn. It would have been better had Logan’s finding out been shown as part of her plan, almost like a way of letting him off easy, but that wouldn’t give these scenes of him driving across the Golden Gate bridge the same sense of smug superiority. 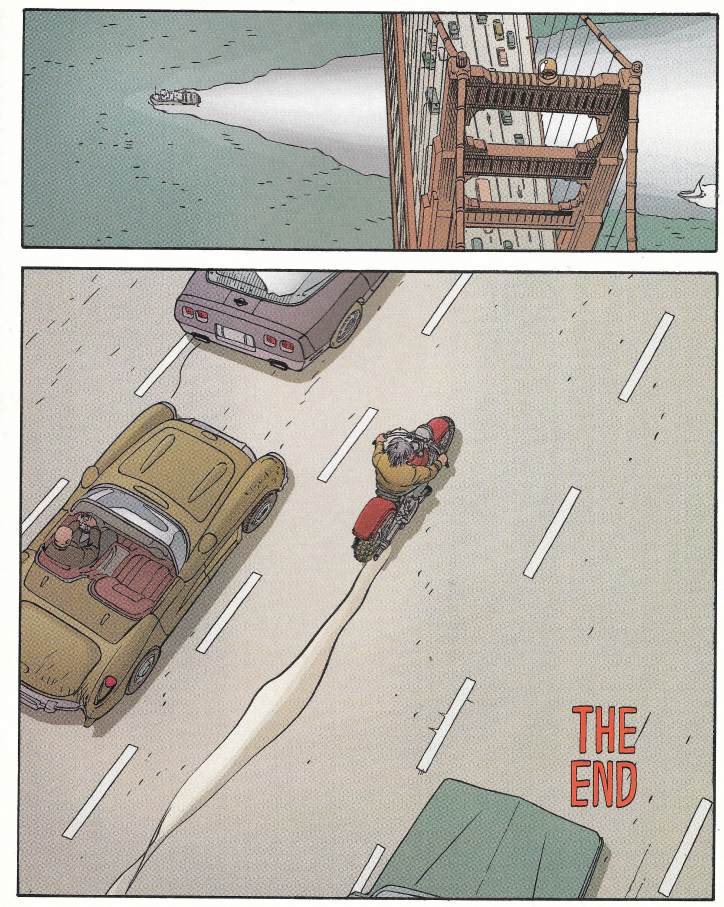 With those panels wrapping this thing up, I have to say that I’m quite disappointed with this one on a story level. The art has some very neat sequences, but this book feels like a Wolverine venture that gives Deathblow nothing to do. Because of that I have to take quite a few points off.

True we get what I believe is a new “heavy” character in the Librarian, which is something cross company team-up books DON’T do. They typically don’t bring out new characters, as it muddies the water as to who owns that character. And why waste an original character or villain on a book that may never get a sequel? That’s like throwing that character away, in a sense. No, these books are usually very "take a villain from hero A and a villain from hero B and have them team up against the heroes."

But even with that bit of bold casting and art that is above the average bar, I found it over too quick and not of lasting impact, with no good “character moments” between our two heroes. Better luck next time, guys.
Posted by SonOfCthulhu at 3:52 AM