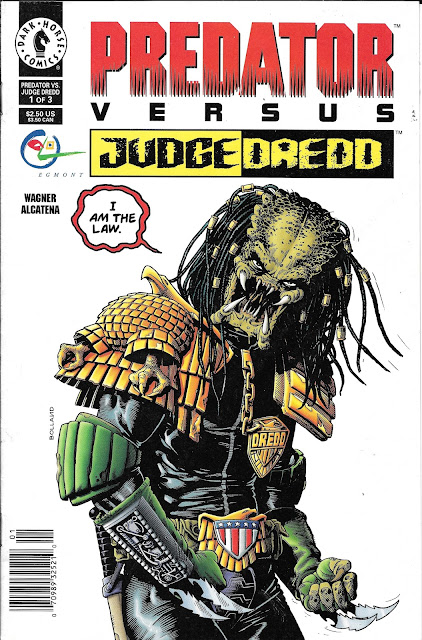 Okay, the Predator took off his mask, your turn Dredd

Nothing should surprise me in comics anymore.

Not the team-ups, anyway.

We’ve had Booster Gold meet the Flintstones, Evil Dead’s Ash face off against the Marvel Zomibes, and the Mars Attacks Popeye book. I’ve seen DC and Marvel shake hands so much that I’m just assuming their big screen counterparts will at some point too. And as for the lesser known folks at the smaller publishers? I wouldn’t be surprised to see Battle Pope fighting side-by-side with Warrior Nun Areala in a discount bin somewhere.

Hey, if that last one hasn’t been done yet, can I get like a finder’s fee on it? It probably would sell reasonably well.

That’s part of this: sales. If a company owns a property that is doing modestly well, sometimes the best way to promote other properties that aren’t doing so well is the infamous “cross-over”.

Afraid that bad brand “B” will taint your “A” brand? Or want extra profits? Or have ongoing storylines that a crossover won’t fit in?

Well then spin that little meet up off in its own limited series.

Heck, hire in savvy enough writing and art teams, and the crossover might turn out better than the series it is meant to promote.

It’s really a throw of the dice. This time, however, the dice came up right on the number we were wishing for. Perhaps they were a bit “loaded” given that Dredd and Predator share a bunch of the same dystopian core beliefs and a clear penchant for blood, guts, and gore violence on a grand scale. But don’t take my word for it, just dip right into this thing…

We begin our tale on the outskirts of Mega-City One with these two characters, Gomer and his mechanical pal Ben, trying to fix their mode of transport across the Cursed Earth. Just a glimpse of this page gives us a feel for how good Argentine comic book artist Enrique Alcatena’s pencils are going to do us for these 20 pages and boy does it feel like we are in for a treat. As the characters follow what they take for a shooting star they make a startling discovery... 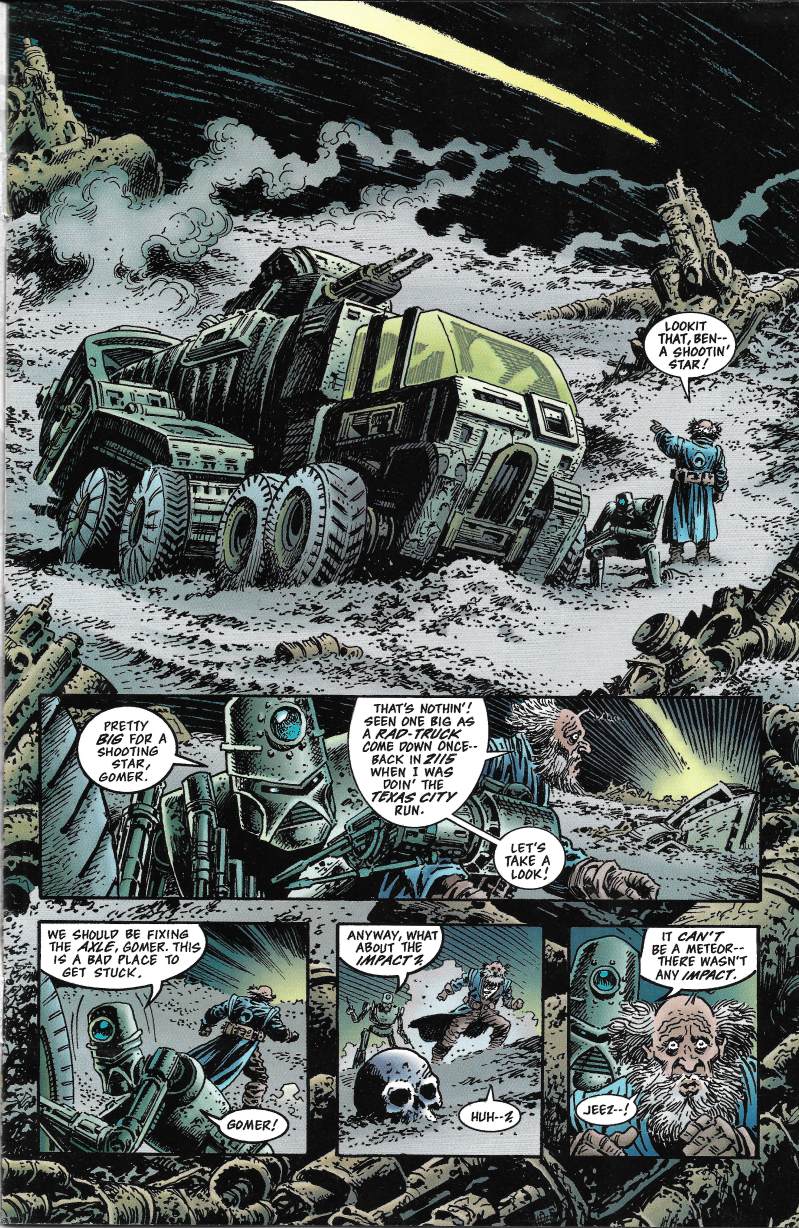 …that what they saw wasn’t a meteorite but is instead a ship which is rapidly burying itself into the silt covering of the Cursed Earth. 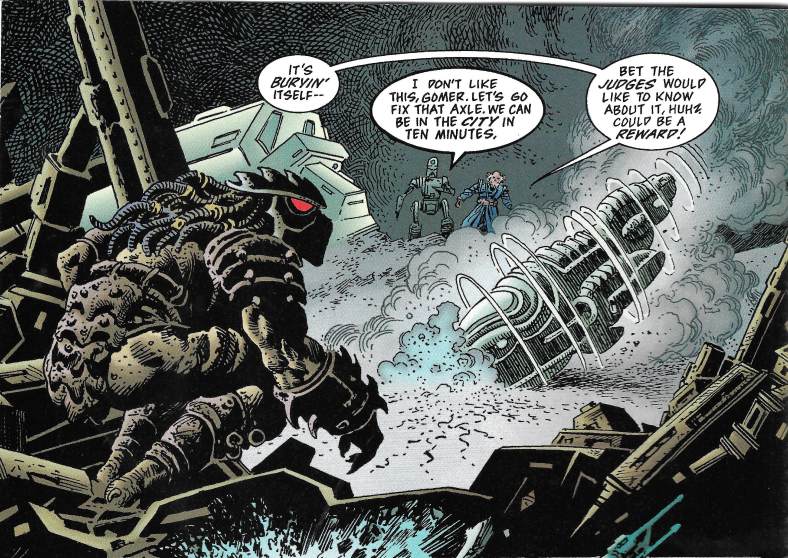 A ship whose passenger isn’t the friendly sort. 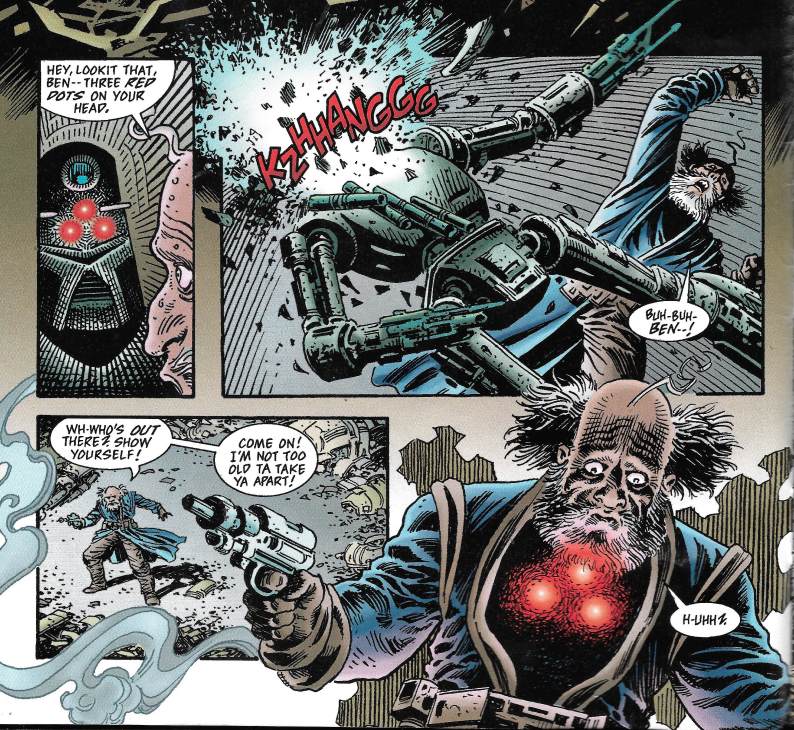 But these two travelers weren’t the Predator’s true objective, as we can tell from the lights in the near distance. He’s come to stalk his prey in Mega-City One itself. 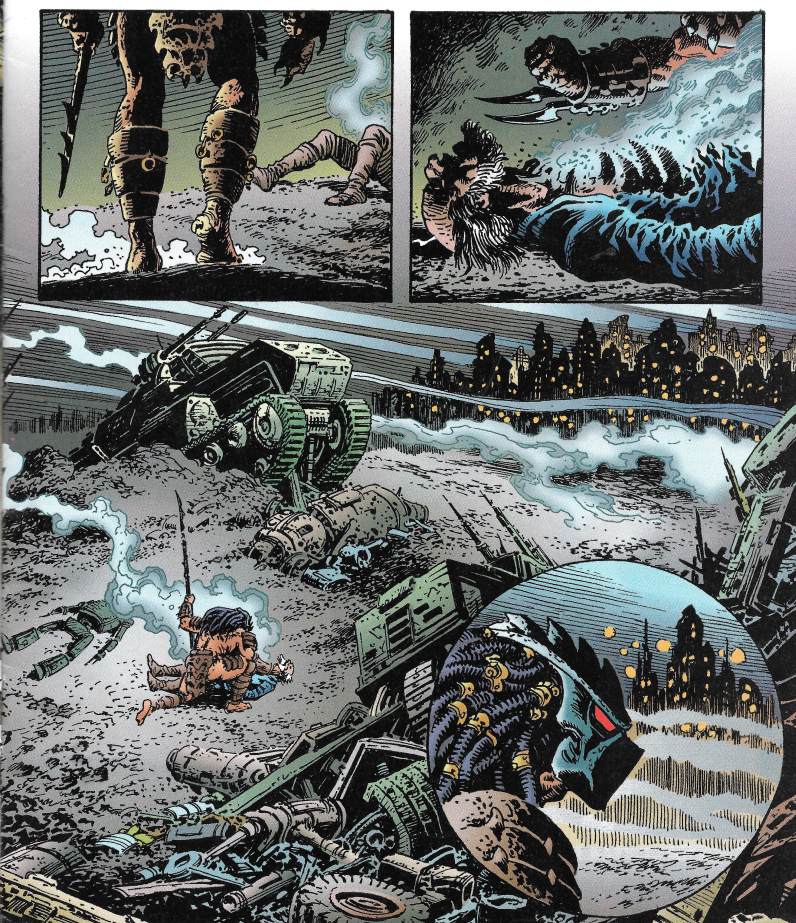 And if you are looking to murder people in Mega-City One, you will find yourself at odds with these folks. I’m going to crow a lot about Alcatena’s art and how it is perfect to render the world of Dredd colliding with Predator, but before going too far it should also be noted that with Wagner at the helm this is THE prefect pairing to make this title. The book follows the spirit of both franchises, with lots of fun bits. After this cool splash I’ll show you what I mean. 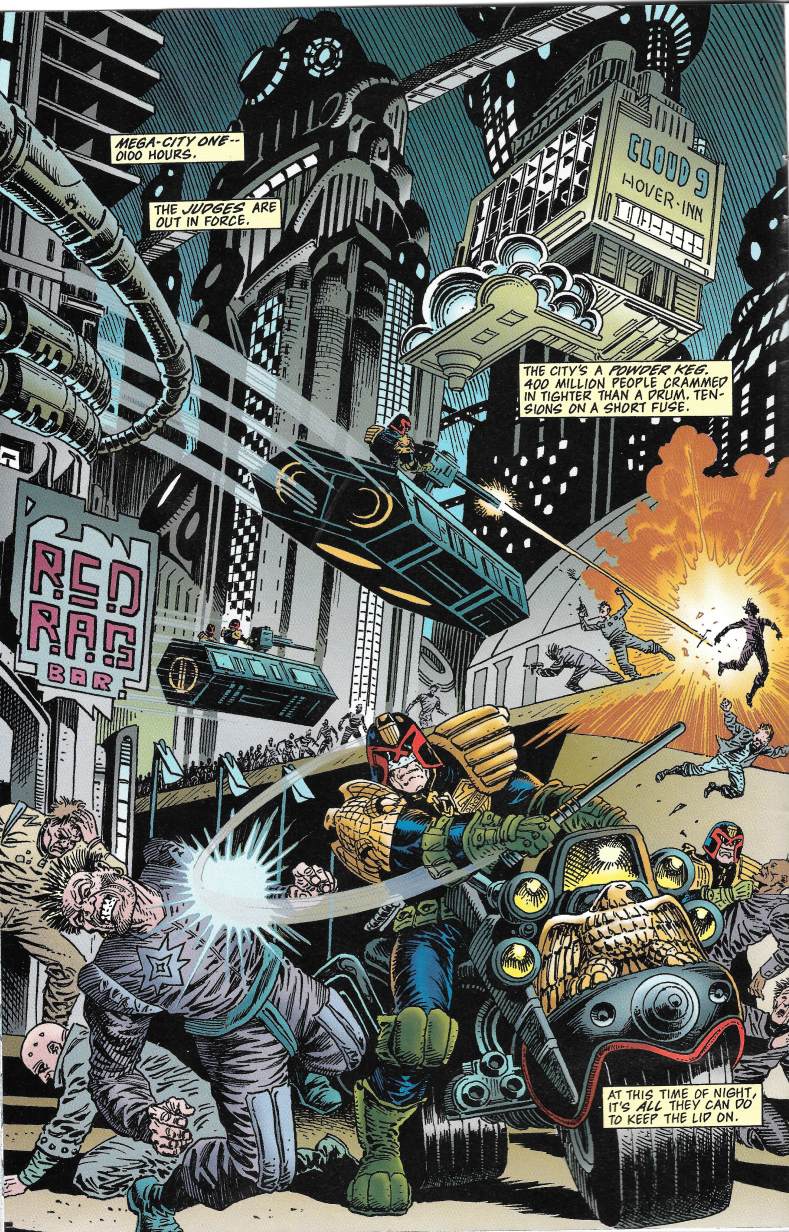 First off for the Judges side, Wagner gives us a simple one page that sums up the role of the Judges in Mega-City One in as brief language as possible. He doesn’t narrate it out, but uses the dialogue to give a new Dredd reader a real taste of the harsh brutality and stony demeanor of what it takes to be cops in this future society. 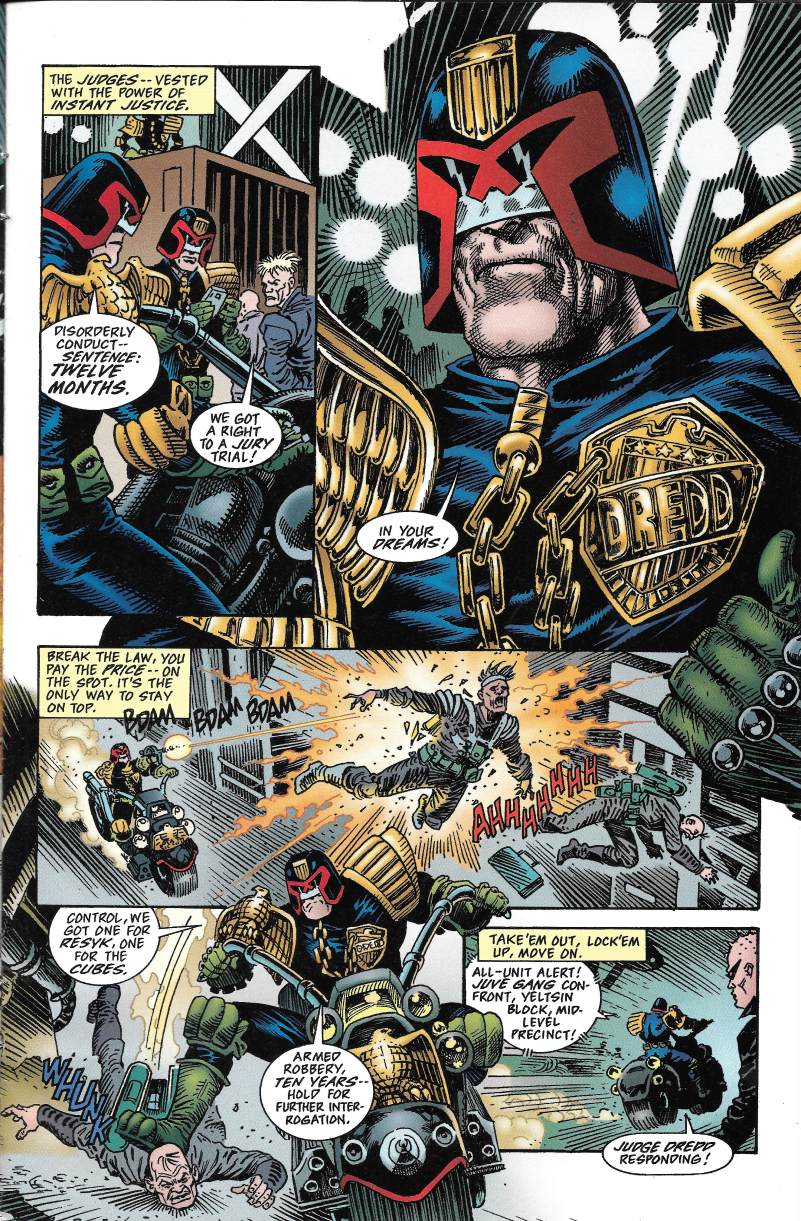 Once that’s established, we get a few shots of the Predator creeping around all inviso-like while two gangs shoot it out in a turf war. 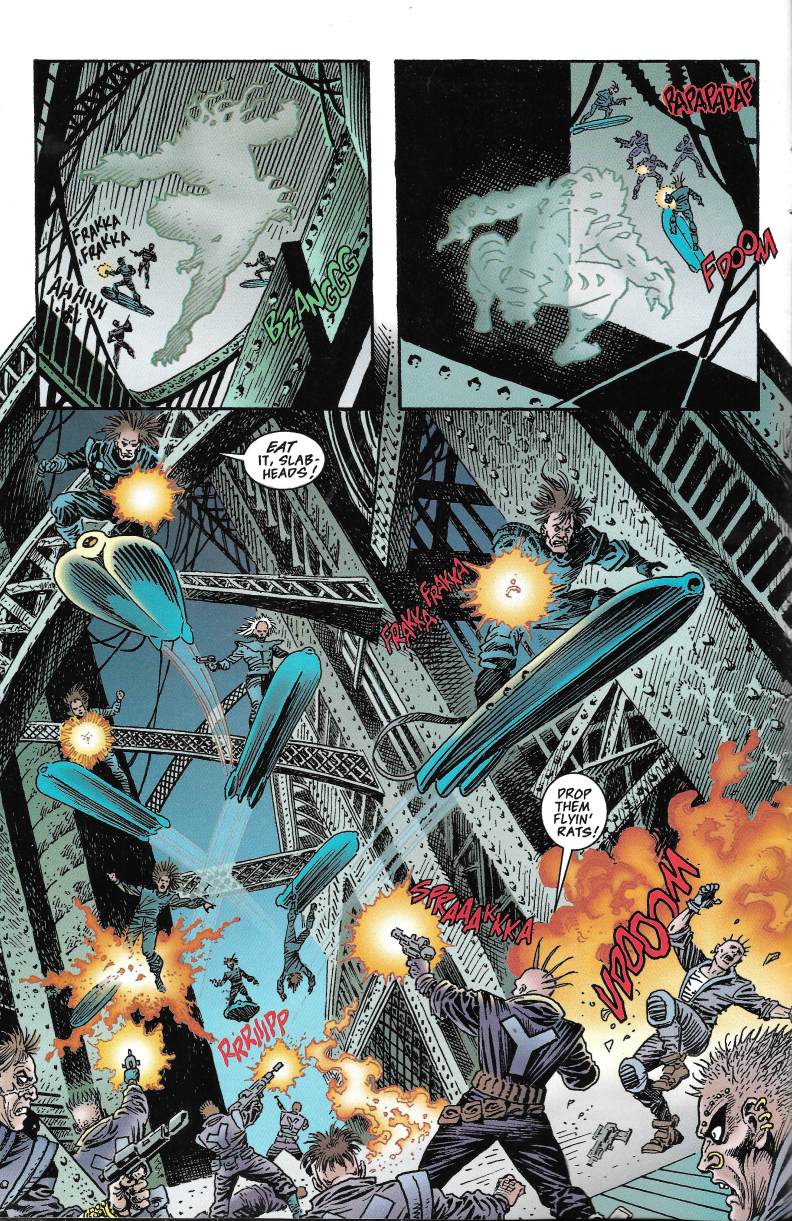 And we even get a few panels of him “learning” the local lingo, which makes me smile. 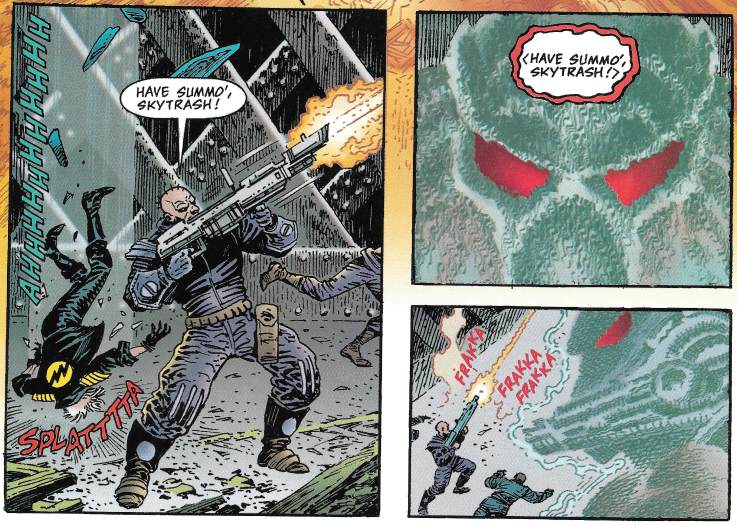 As the Judges ride in and the gangs scatter, the Predator appears to have had enough of being a bystander, and hops down for a closer position. 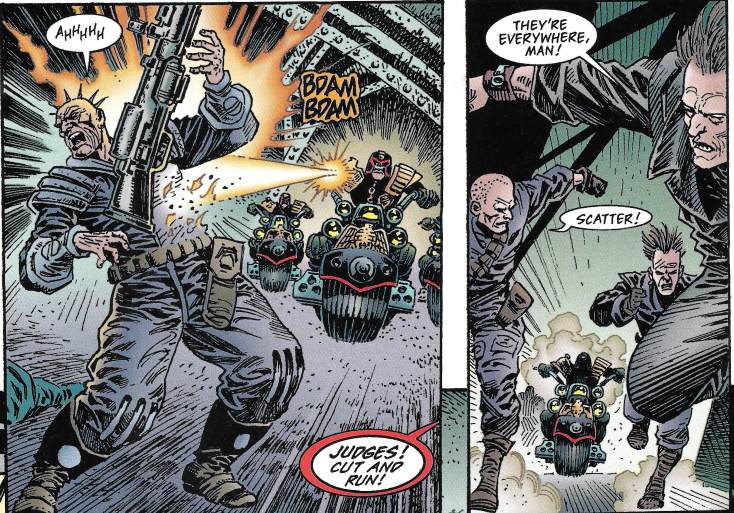 The Judge making the most noise here is Rourke, who is all ready to rough up a few of the cornered perps with his daystick, even as the other Judges try to get him to go easier on them. And that’s when this book starts to really cook. 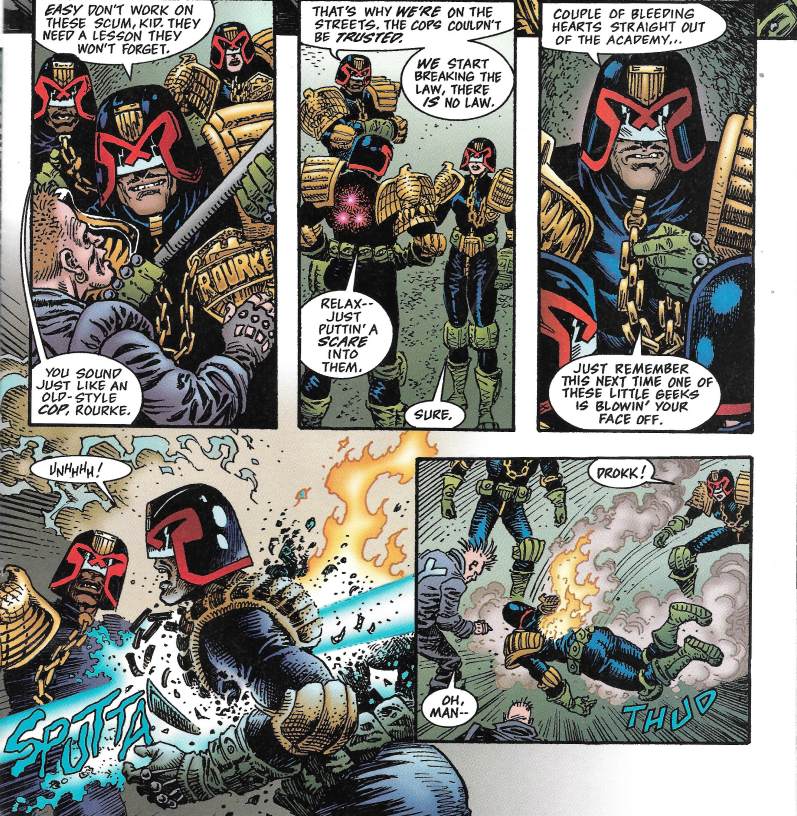 The Predator declares open season on Judges, and Dredd gets wind of it on his radio while the other two officers continue to take fire. 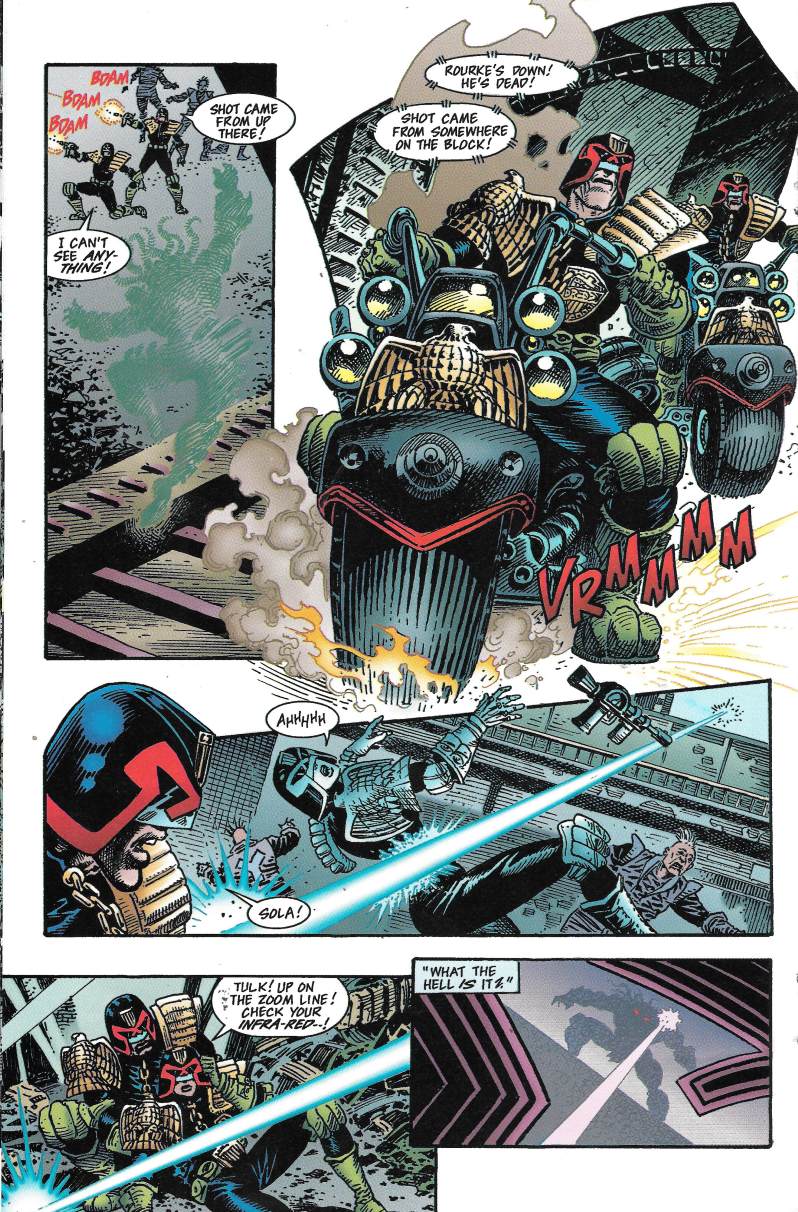 Dredd rides in, using the Hi-Explosive ammo on his Lawgiver to redecorate the overhead walkway the Predator is firing from. 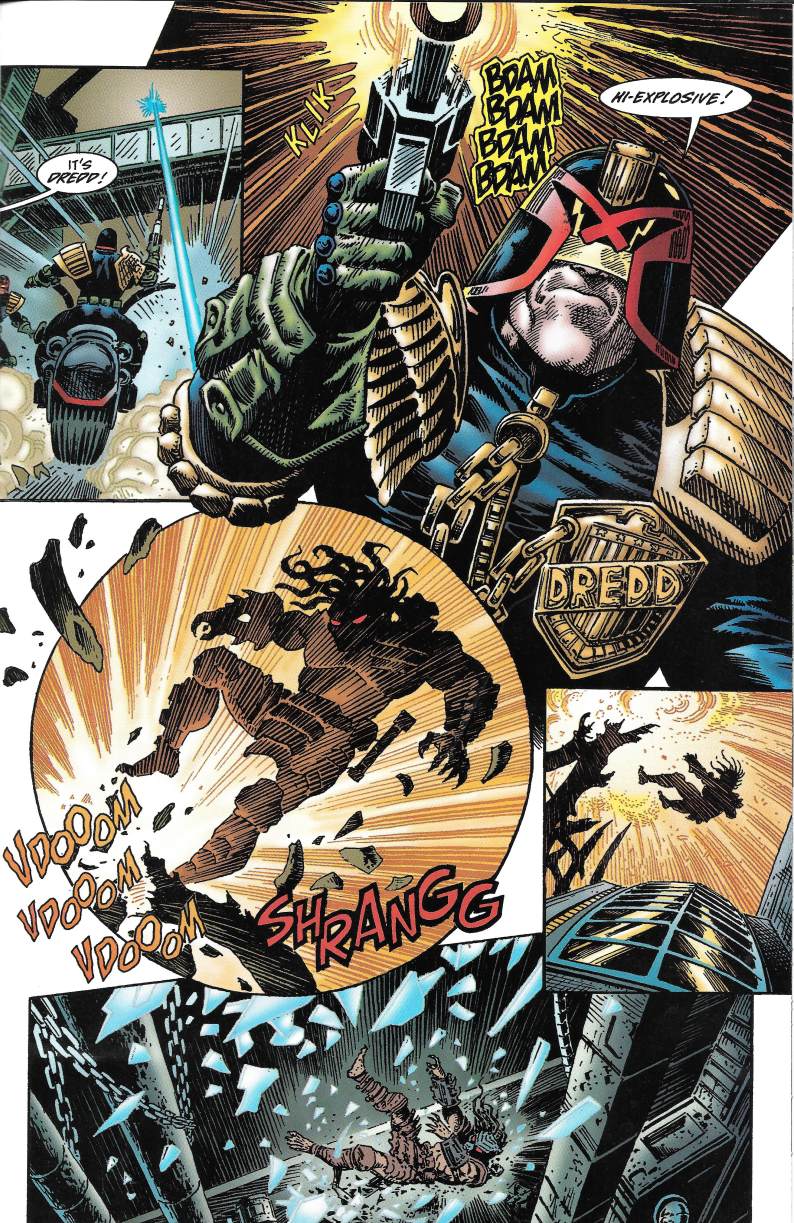 Dredd checks on his fellow Judges and then heads into the building the perp appeared to fall into. 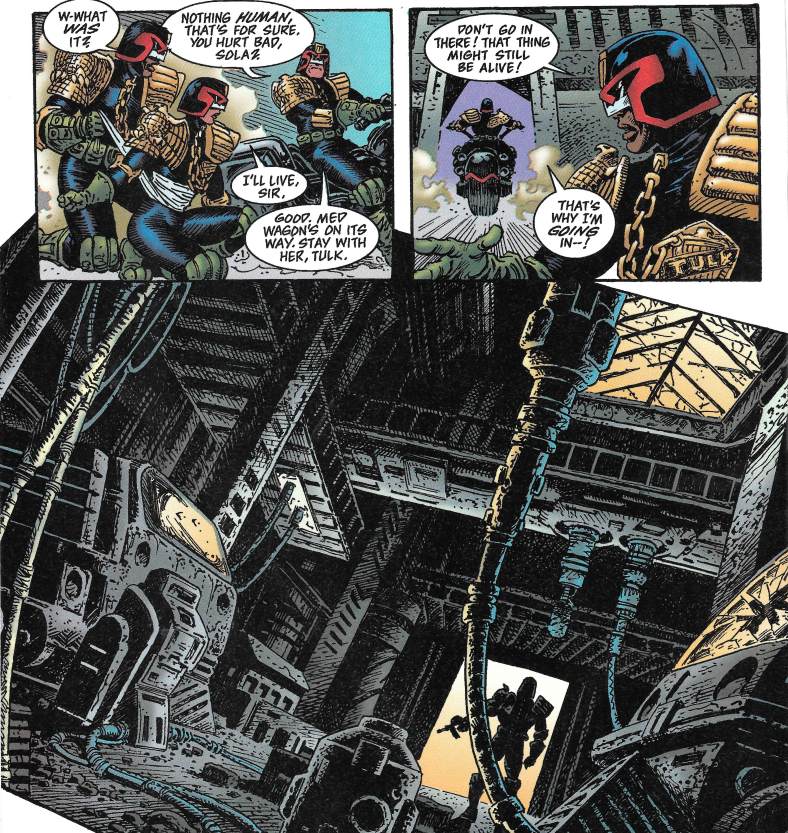 He doesn’t find a body where he expects though, and follows the trail of weird green blood from the wounded creature right into a trap. 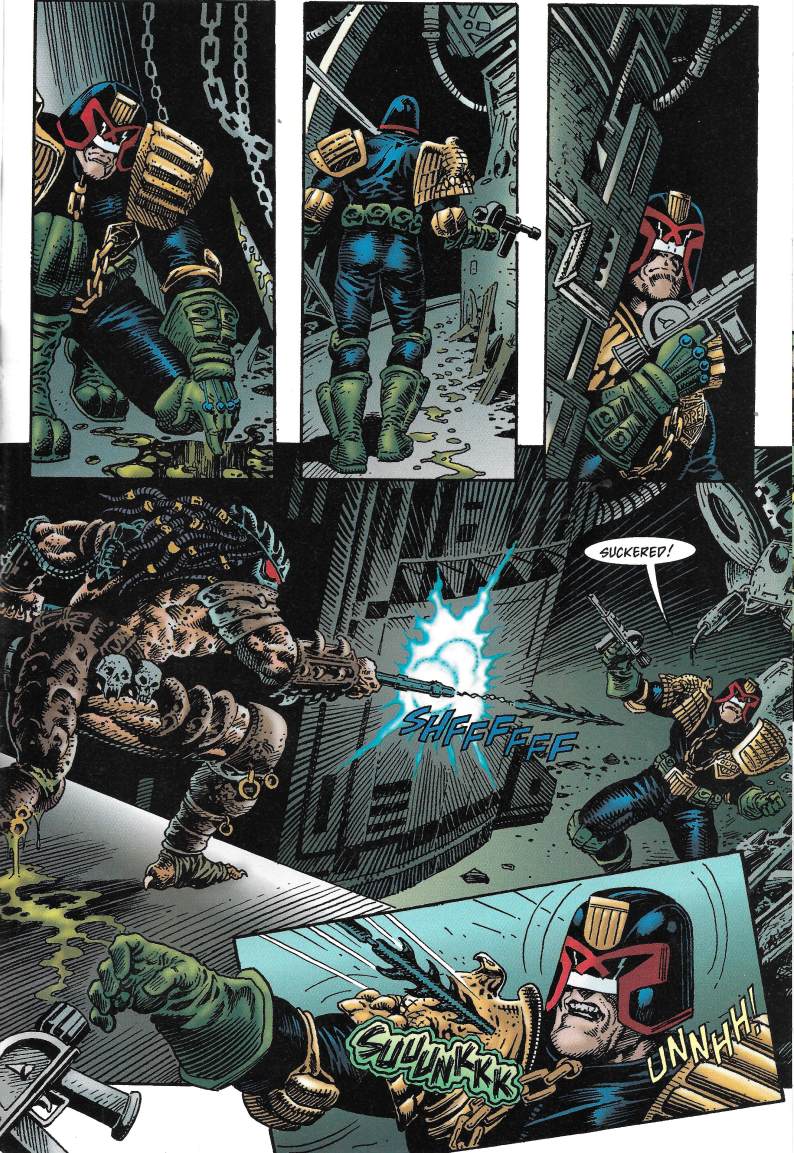 Hooked like a fish and having dropped his Lawgiver, Dredd has to use his fighting skills to get out of this one, as the alien creature hauls him to the top a rack of nearby machines. 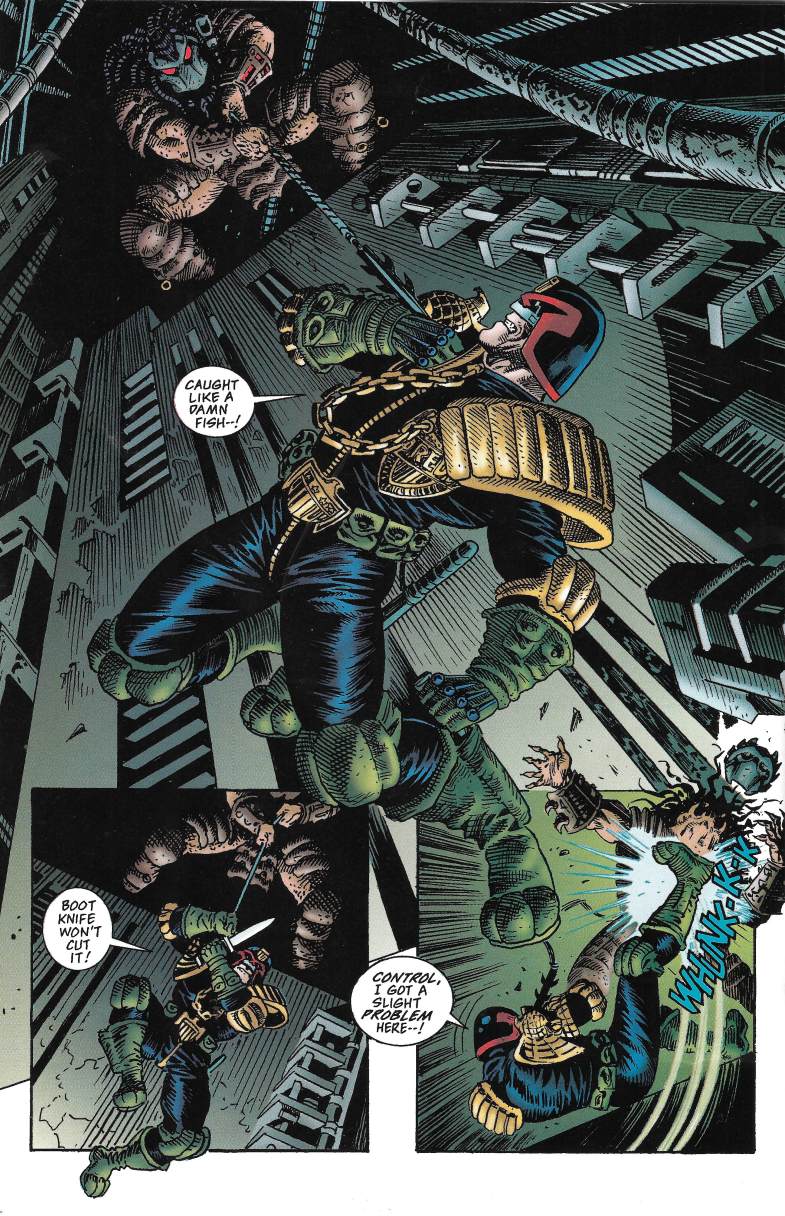 Which leads to possibly the best mano-a-mano with a Predator since Arnold tangled with him in the original movie. These two are a good match, in my opinion, the competition not something that Dredd was quite prepared for. 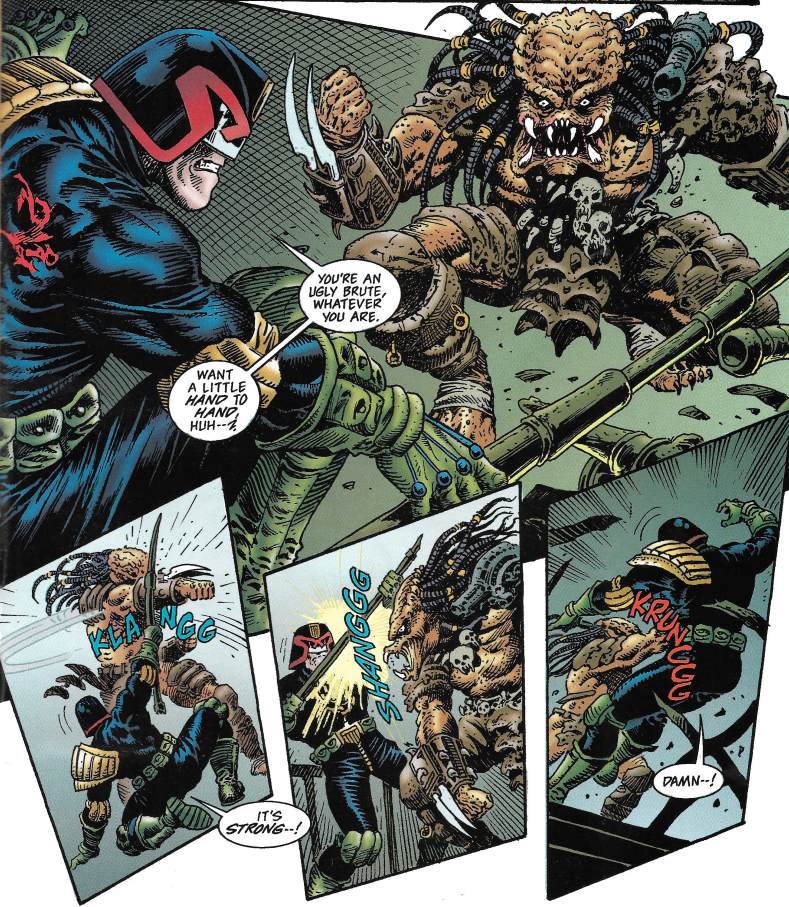 In the end, the Predator tosses him off a railing, where Dredd lands just as backup arrives. He comes to in the Grand Hall of Justice in a med bay, carefully positioned so we don’t see his face, and Sola updates him on the status of their killer as he puts on his uniform. 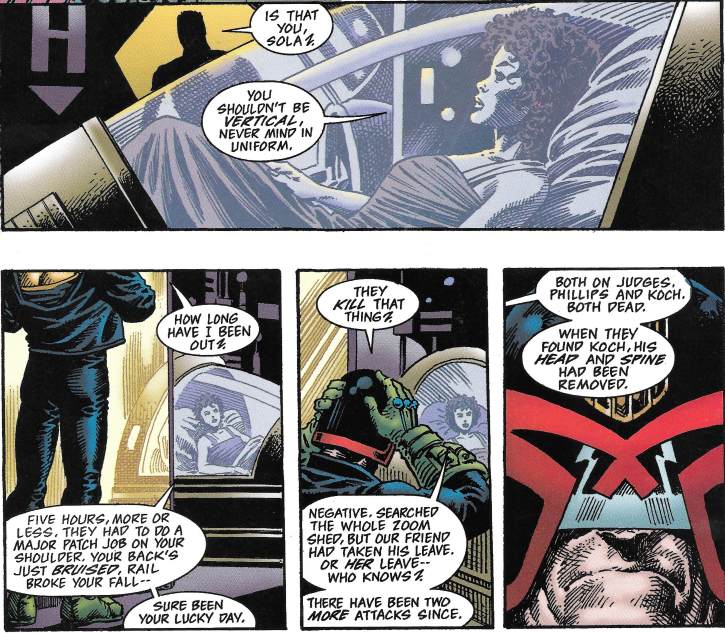 While Dredd reasserts his right to work the case, the Chief Justice calls in some special help. A young woman by the name of Schaefer who has special knowledge of the Predator. Her info seems to corroborate the movie Predator 2, which is kind of neat and her exact lineage makes her something of an ancestor to Arnold’s character from the first film. Sort of neat little call backs. 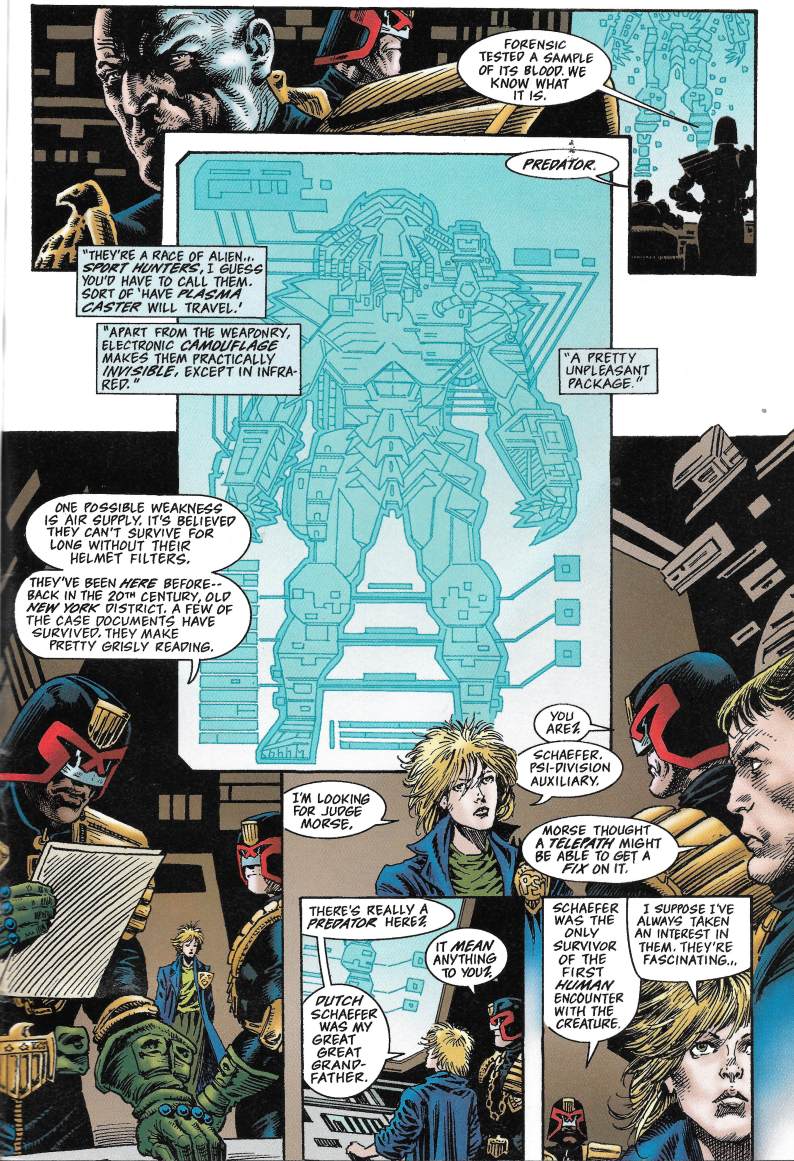 While the officers sit digesting all the information, Schaefer proposes a theory that the prey the Predator has selected to hunt…is Judges. From our ending panel, it appears she’s right. 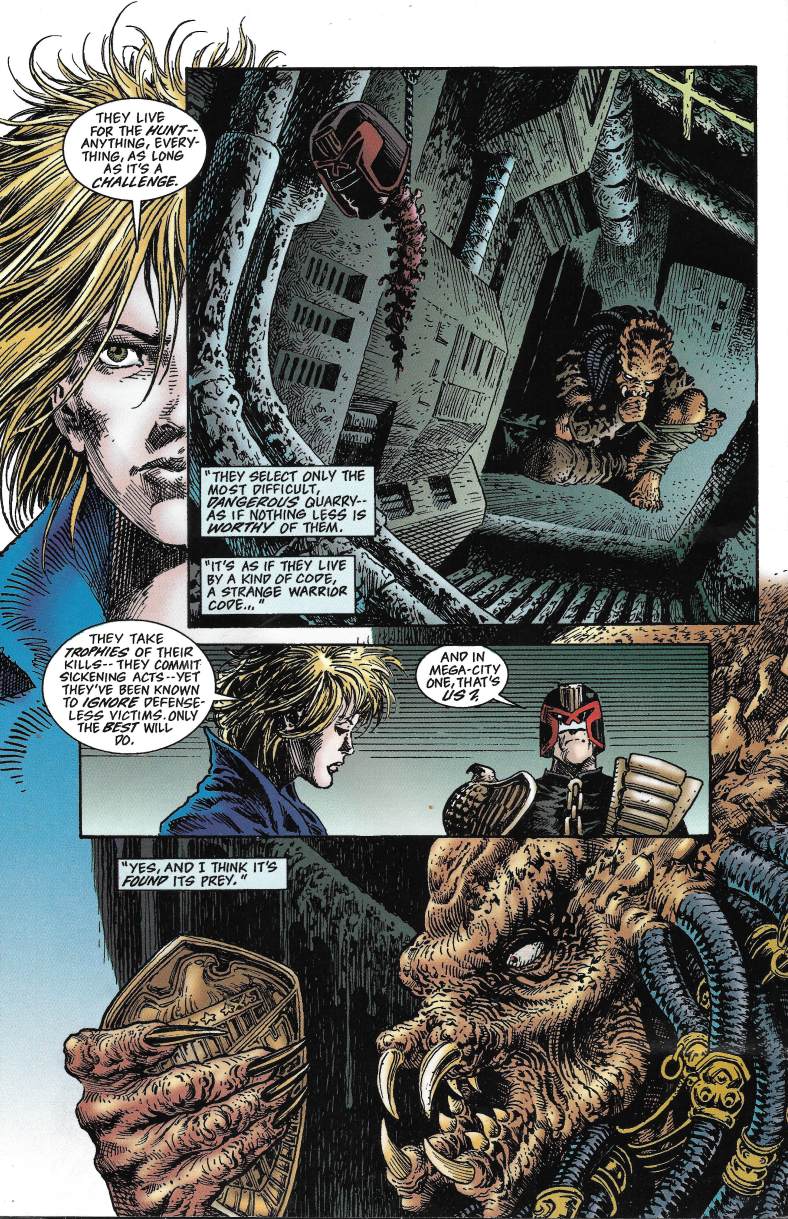 What a BLAST! Yes, it is short, but it gets right to the point, there are NO Ads to get in the way and the quality of both art and story are top notch. Any wonder that Dark Horse went back to this well a bit later with Aliens added in? I wouldn’t think so. Only complaint here is that in Crapbox usual style, this is the only one I received.
Posted by SonOfCthulhu at 3:24 AM