The Twilight Zone : The Shadow #1 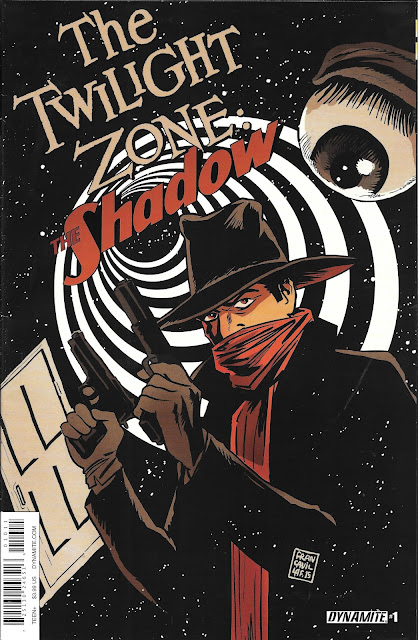 Who knows what dimension lurks in this crossover’s evil mind?

Comics one up me every time.

I hate to “front load” this section of bizarre meetings, greetings, and beatings with stuff so "out there" that the casual superhero crossover seems tame. However, every time I flip through the Strange Team Up Crapbox shortbox (yes, there’s a whole shortbox full!) I find weirder and wilder stuff.

By now I’m incapable of judging which of two competing books is stranger. My patented Will Smith Weird-Shit-O-Meter has completely busted and I have no way to rank these trouser snakes by which one is longer. All I know is that THIS one is pretty far up there.

And handily I got all four issues.

Which is so rare. A complete story. And a pretty good one. It is more homage to the history of the pulp radio, film and paperback hero Shadow than it is anything else. Yet the tale unfolds as if they were episodes in that realm of Rod Serling’s famous 50’s anthology TV show The Twilight Zone.

I’m spoiling some of the fun by showing you this first issue, but I think it would be a rare person who blind bought this without reading the back cover, so let’s just dive into it, whadaya say?

The Shadow has come a long way from his humble origins and in this bizarre adventure he’ll take an unexpected journey tracing out those roots. Our tale begins at midnight at a secluded farmhouse in the woods near Yaphank, New York in the year 1939. On a makeshift stage beside the house a man addresses the crowd before him making a simple statement… 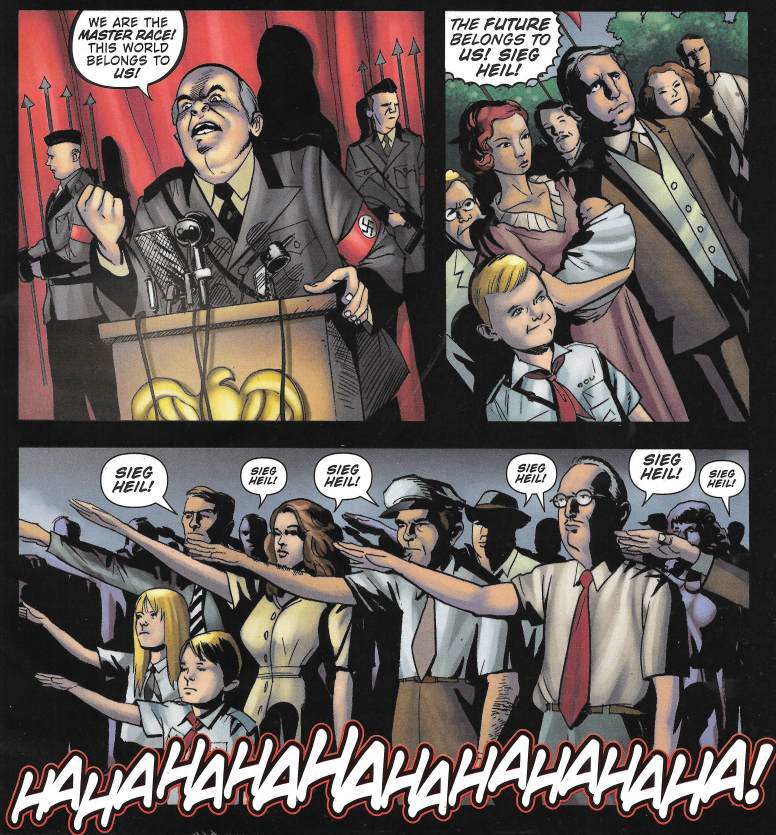 We all know how everyone feels about Nazis 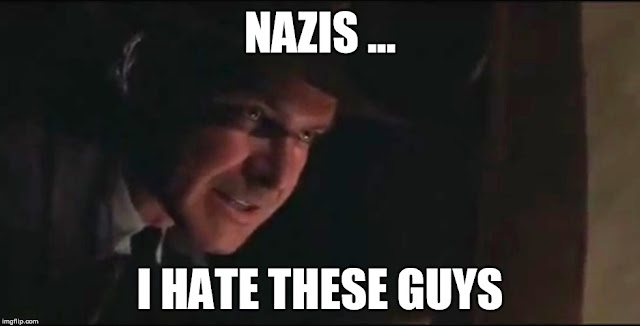 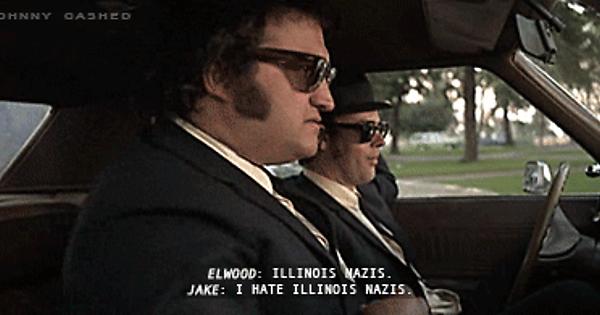 And apparently they aren’t alone in that hatred because as the sieg heiling gets under way, a familiar haunting laugh resounds among the throng of white supremacists.

I do have ask that isn’t blond-haired Johnny Nazi scout up there just the most easy to hate kid ever? Just look at his smug “I can do no wrong” face and tell me you don’t want to punch him one in the gut. And I KNOW that’s so wrong, because it ain’t the kid’s fault his parents are raving psychos who think people with more melanin in their skin are somehow inferior. The kid can’t help that. He’s indoctrinated into a belief system since birth and most of his actions could be turned around by some positive role models and possibly a several pounds of good grass.

At least it worked for those two Prussian Blue chicks, so it’s worth a shot, anyways. 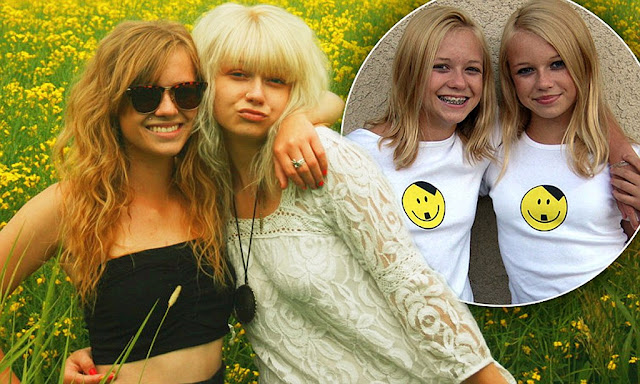 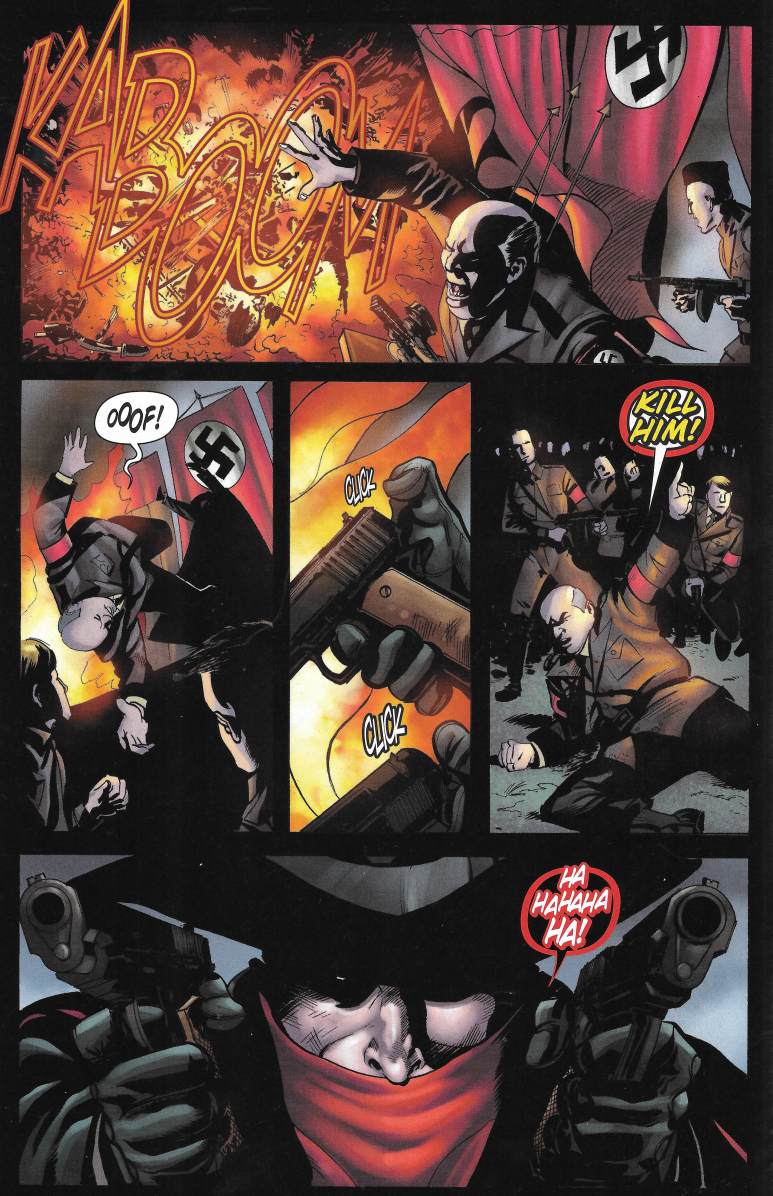 …and perhaps an explosion or two. 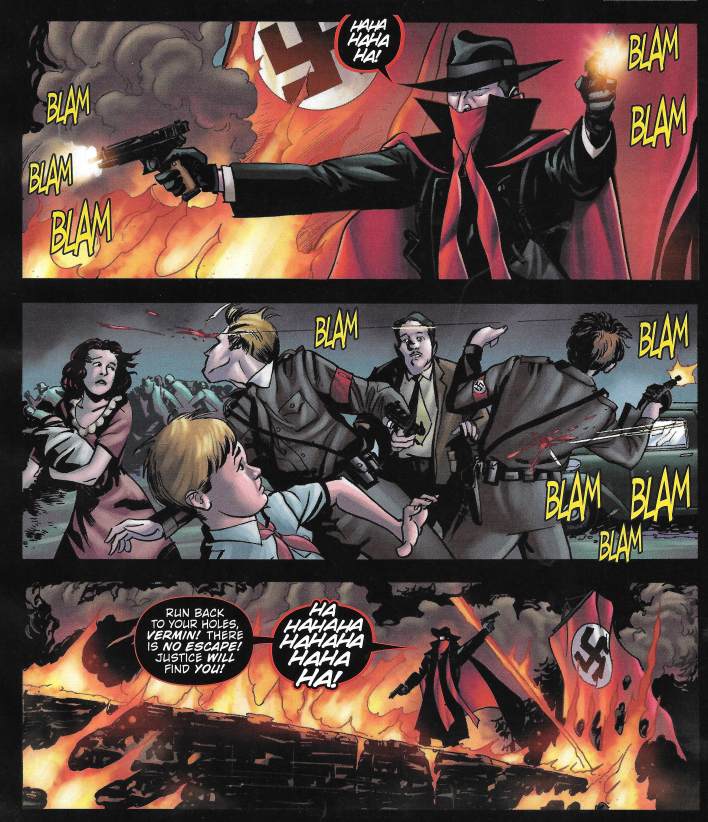 But no, mostly those well-placed shots will do, as the Shadow mows down the neo-Nazis (missing little Johnny. Maybe that kid will turn around now) while standing in the symbolic destruction he has wrought.

Hard to dislike a book that starts off with some Nazi-killing. So far, Avallone’s story has me interested. Let’s see once we get past the action opener what more he’s got and how this all will take the inevitable turn into the dimension of “sight and sound.”

When the Shadow returns to his car, Margo Lane questions his methods. Her prime complaint comes from kids like little Johnny being present while this man she kinda loves / kinda works for mowed down their Moms and Dads. To be fair, I only saw him shoot males in uniform, but whatever. Seems Margo feels a bit used and The Shadow is his usual talkative self. 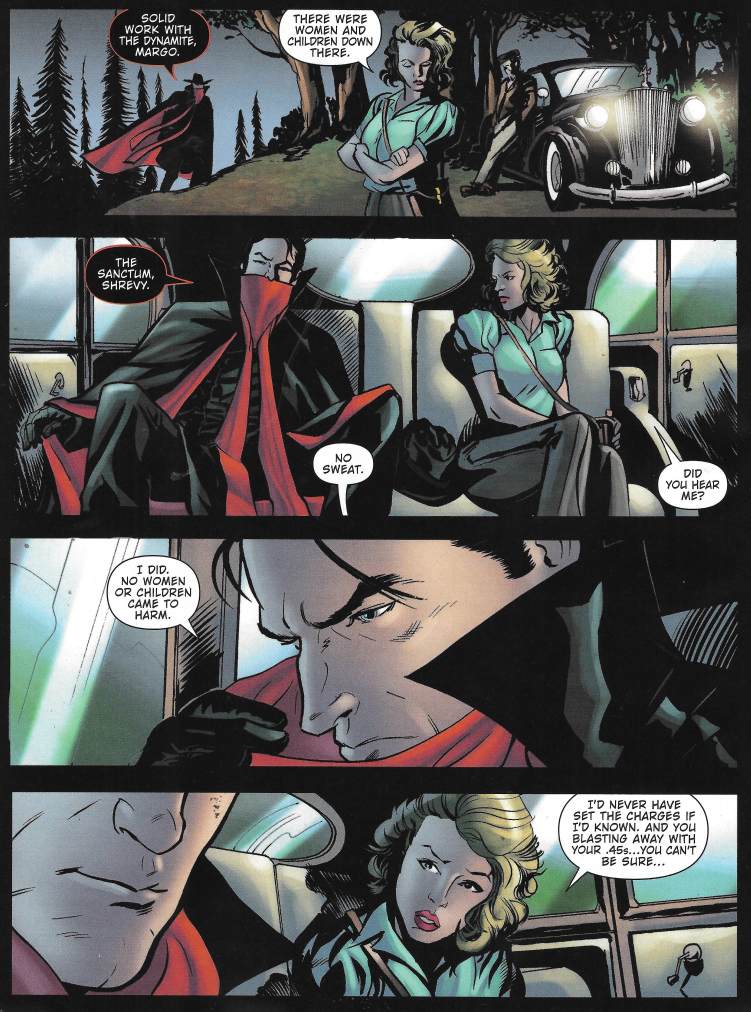 As the drive goes on, our hero does offer a bit of explanation, not that Margo is really interested in his line of reasoning. 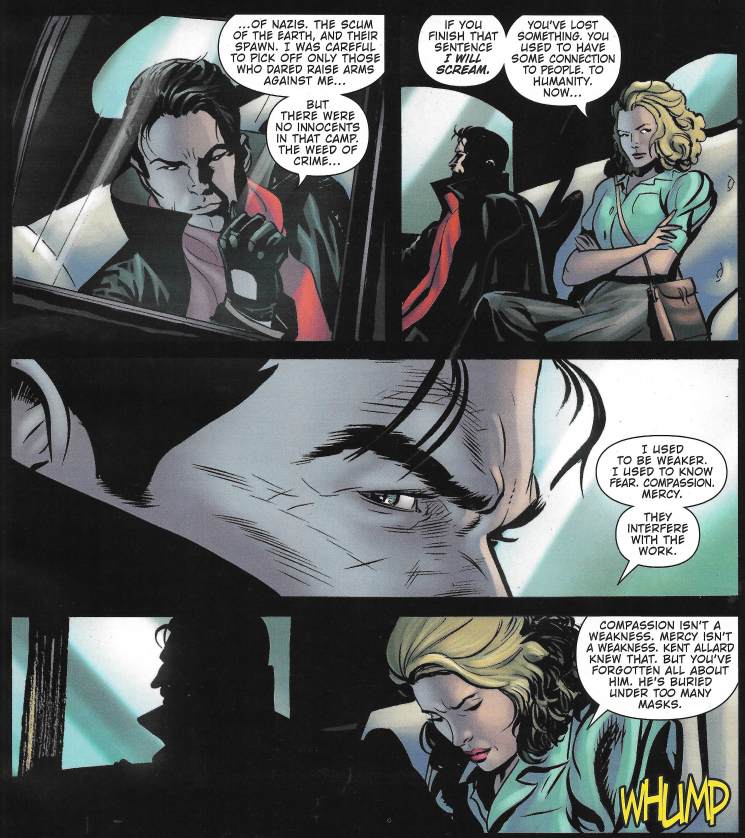 And it is RIGHT here that you get what the book is going to be about. You have a chance to hop onboard this train or stay off right in these panels. The Shadow lacks basic human compassion, and while that is somewhat unnecessary in his line of “work”, the T-Zone is going to take him to a place where he will learn to offer a degree of compassion or perhaps have his soul consumed by his unwillingness to show it. These are the roadmap panels, and I have to state I am intrigued.

This is THE SHADOW we are talking about and his exploits at rooting out the weed of crime and evil are legendary. The neat thing about this? We will get to see some of that too.

But first, this scene of the angry Nazi’s blowing The Shadow’s ride off the road with a howitzer: 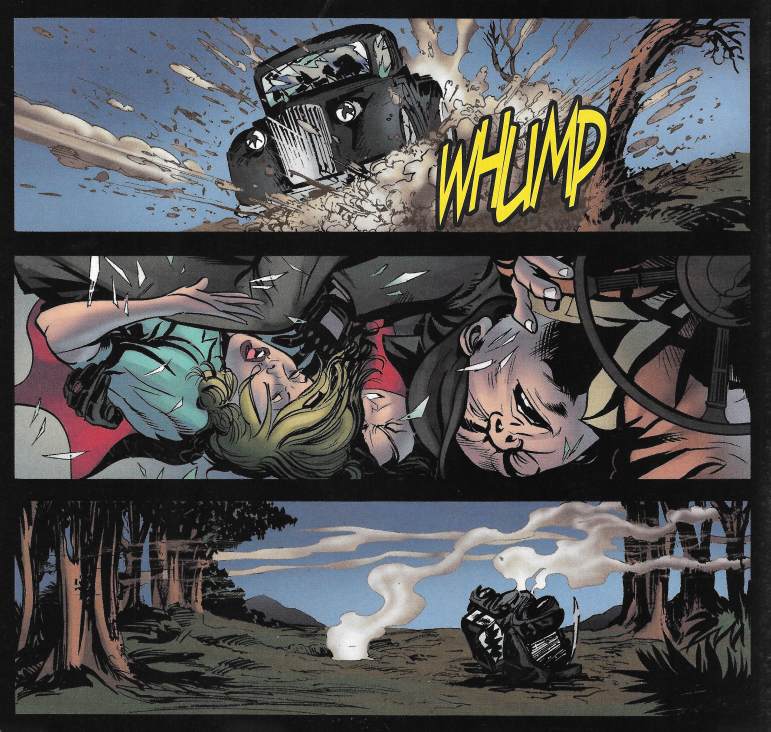 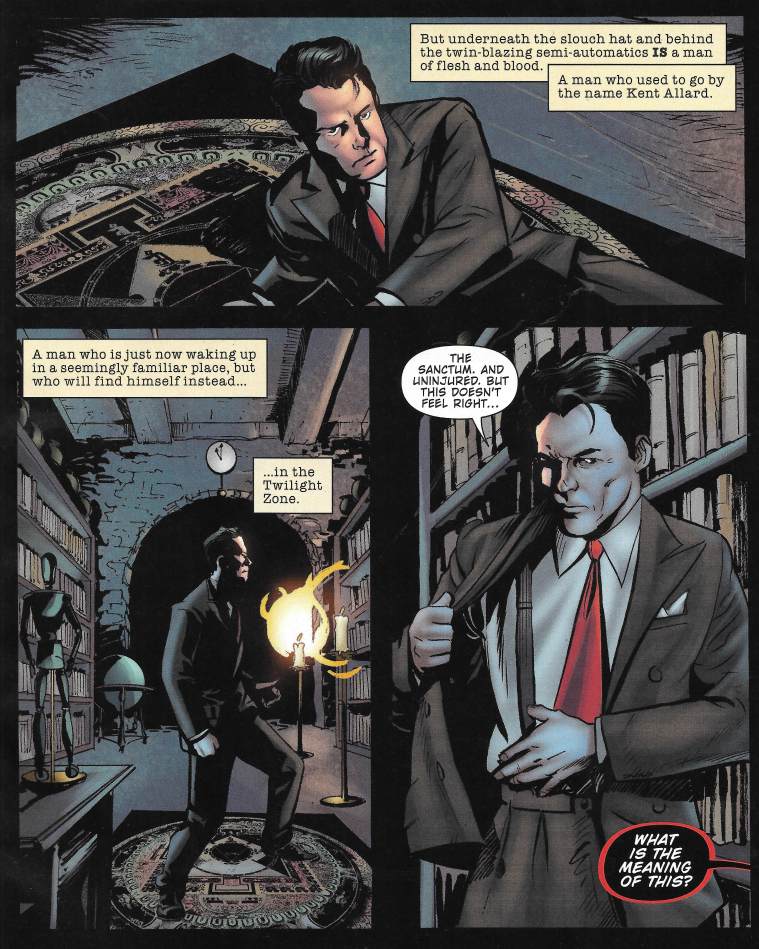 …because even though The Shadow and his associates are knocked unconscious in the accident and should awake in the bottom of a culvert, where The Shadow awakens is HERE, in his Sanctum. He appears as Kent Allard, which is the name of the man who became The Shadow before Allard took over the name/identity of the perpetually abroad Lamont Cranston. And as the voice of Rod Serling ushers us into The Twilight Zone, Allard is startled by another, more troubling voice… 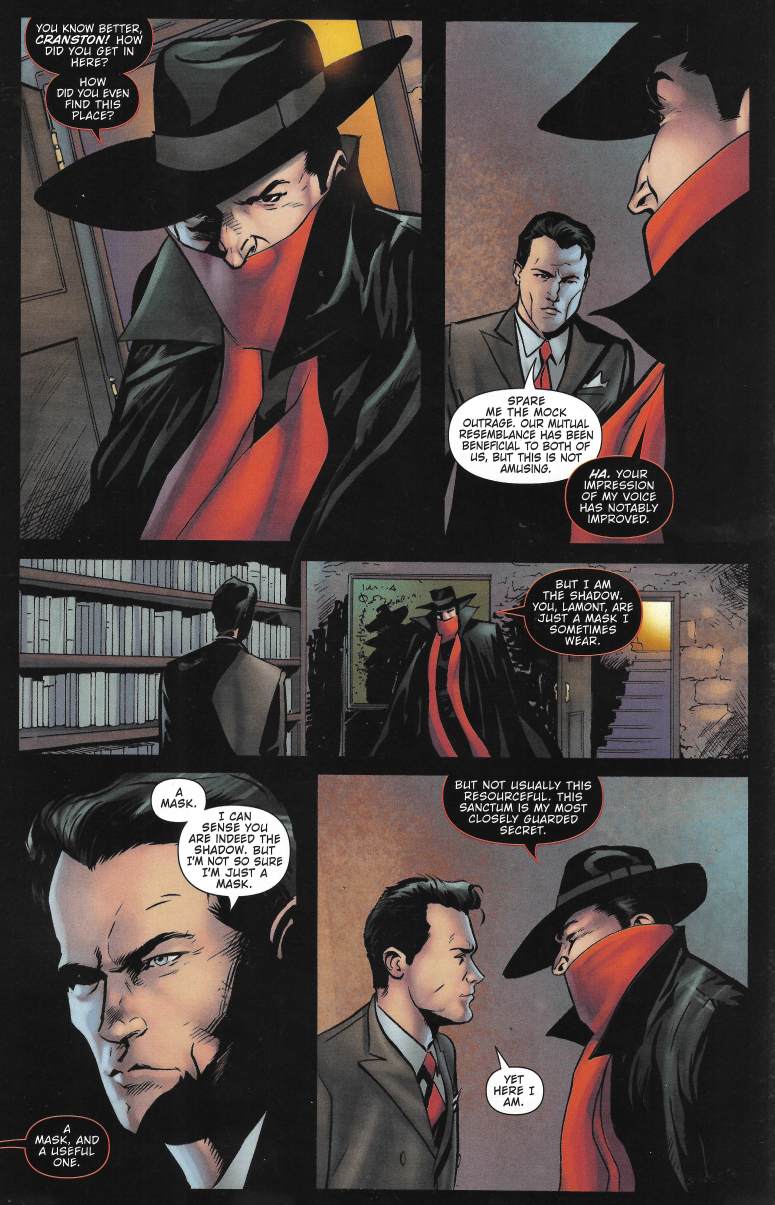 …that being THE SHADOW, which doesn’t surprise Allard/Cranston near enough in my thinking. It does however lead to this interesting conversation between Allard/Cranston and The Shadow, which feels almost a bit meta-textual in it’s implications. 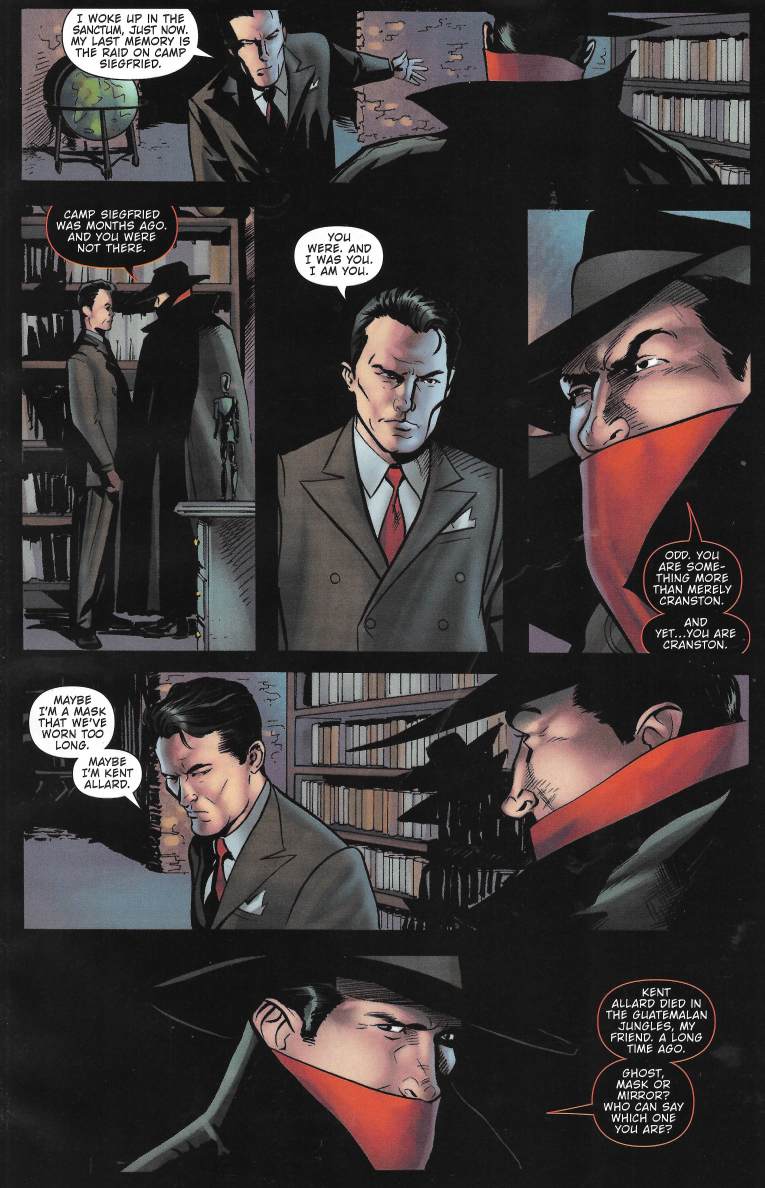 And as Allard/Cranston tries to understand more about how he could have been The Shadow and yet here clearly is NOT The Shadow the metaphor to all of this identity crisis and Allard’s loss of his real individual self in all the masks he wears starts to seep in.

Allard/Cranston leaves, but finds that he truly isn’t The Shadow in some essential way as even the boss’s agents discount him. 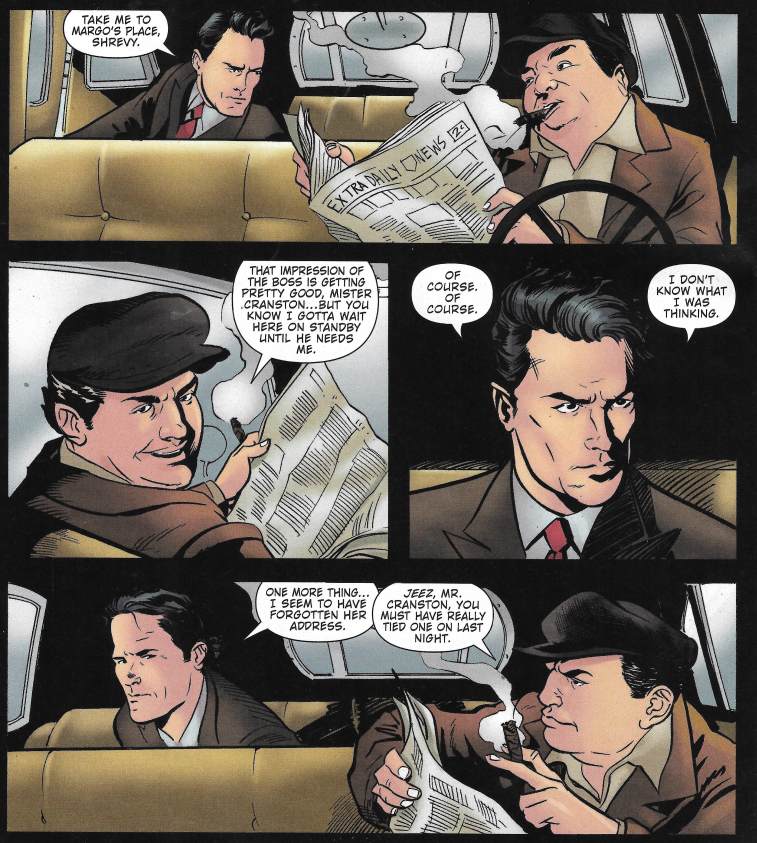 He does end up at Margo’s and prepares to unload the odd sort of day he’s been having on a sympathetic ear. 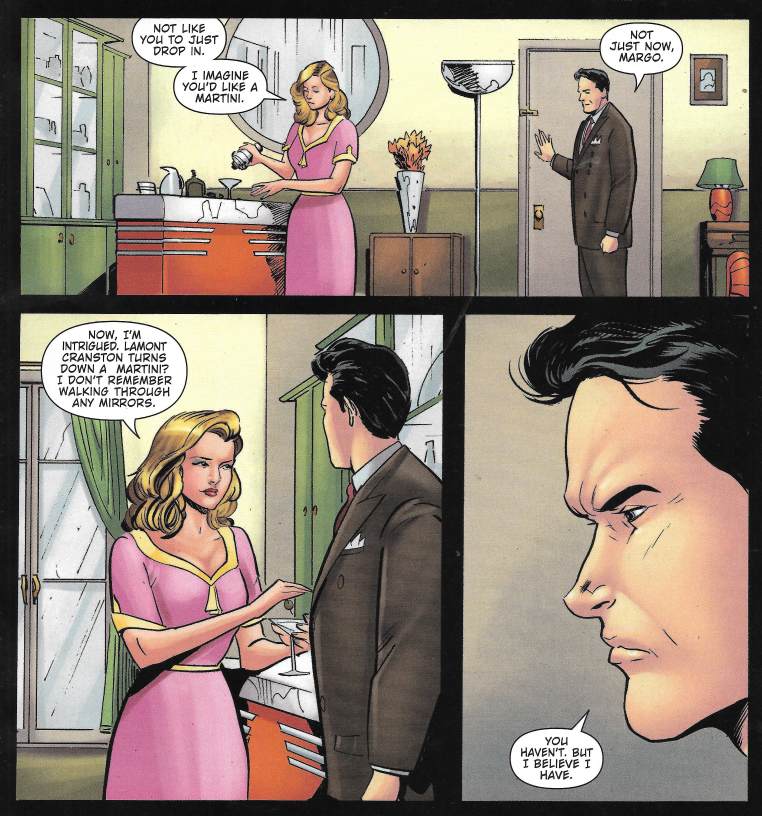 So Allard/Cranston starts in on their conversation after the Camp Siegfried raid, to which Margo declares “I said that to The Shadow. Not you,” clearly showing that she recognizes he is the person that The Shadow mimics to pass in society and gain knowledge. Allard/Cranston relays that it was him and that he is The Shadow, just de-powered somehow. Neither of them know how they escaped Siegfried, but Margo makes a startling statement that is very on-the-nose. 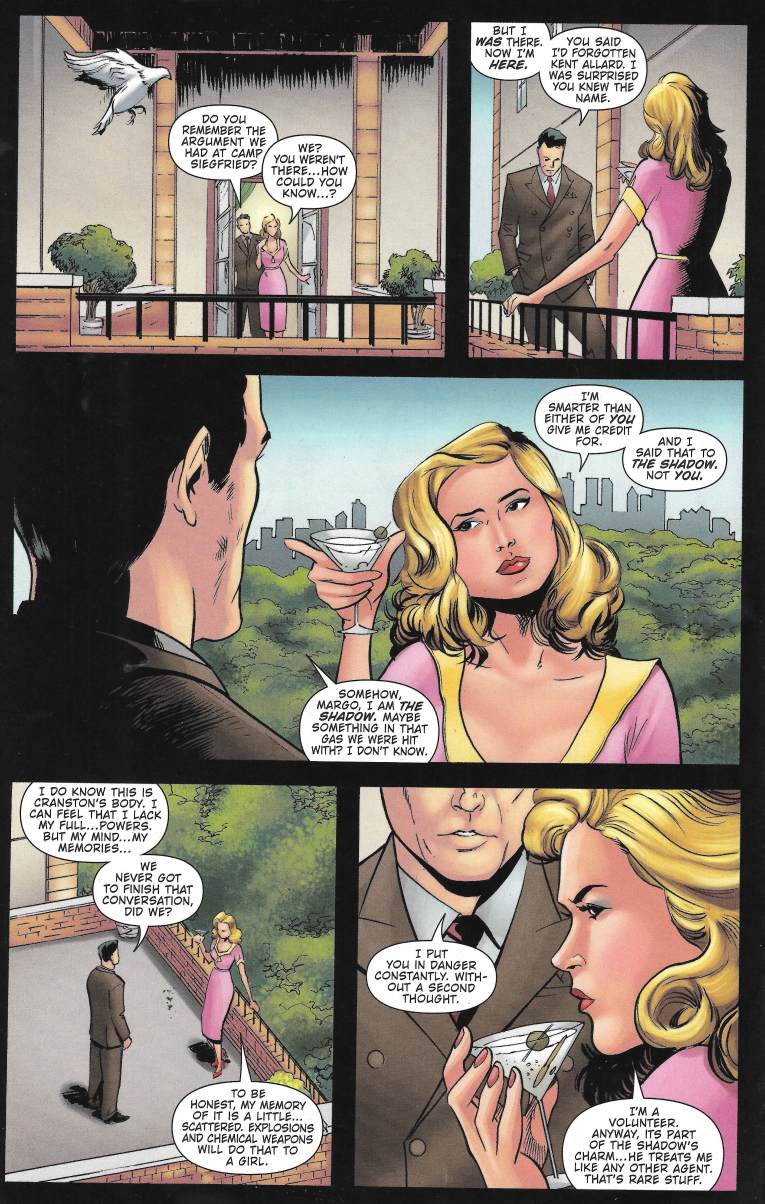 The Shadow, in treating her as just another agent, is actually paying her a very high complement. She isn’t singled out and “protected” or made to feel like someone’s damsel in distress. She’s given full agent status and treated as an equal. That’s a pretty unique outlook for this time and place.

At this point Margo realizes that Allard/Cranston is for real, that he actually believes he’s The Shadow. She says something about maybe he’s finally cracked. 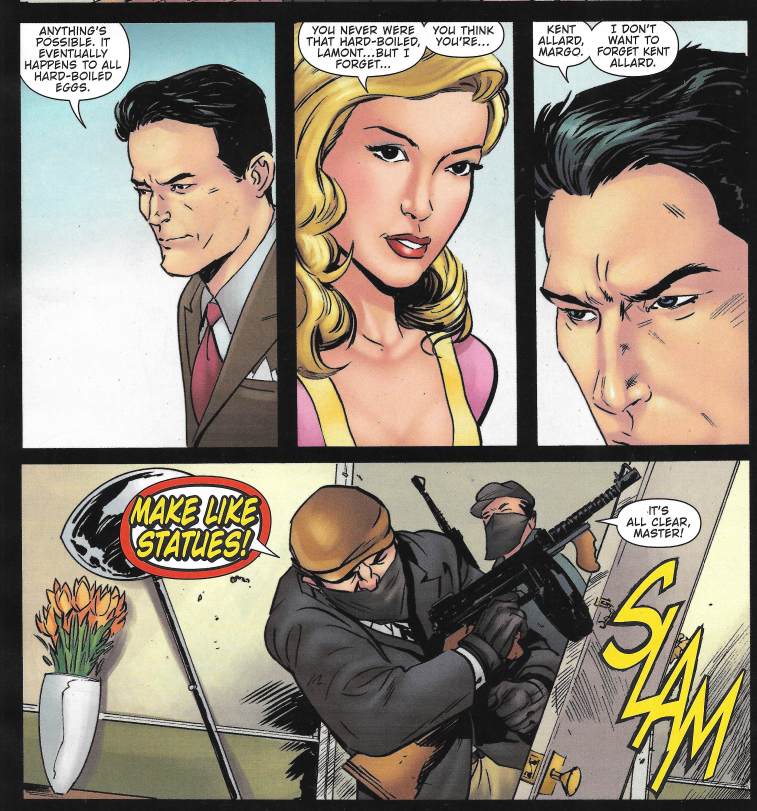 And at this point a gang of ruffians burst into the apartment, lead by… 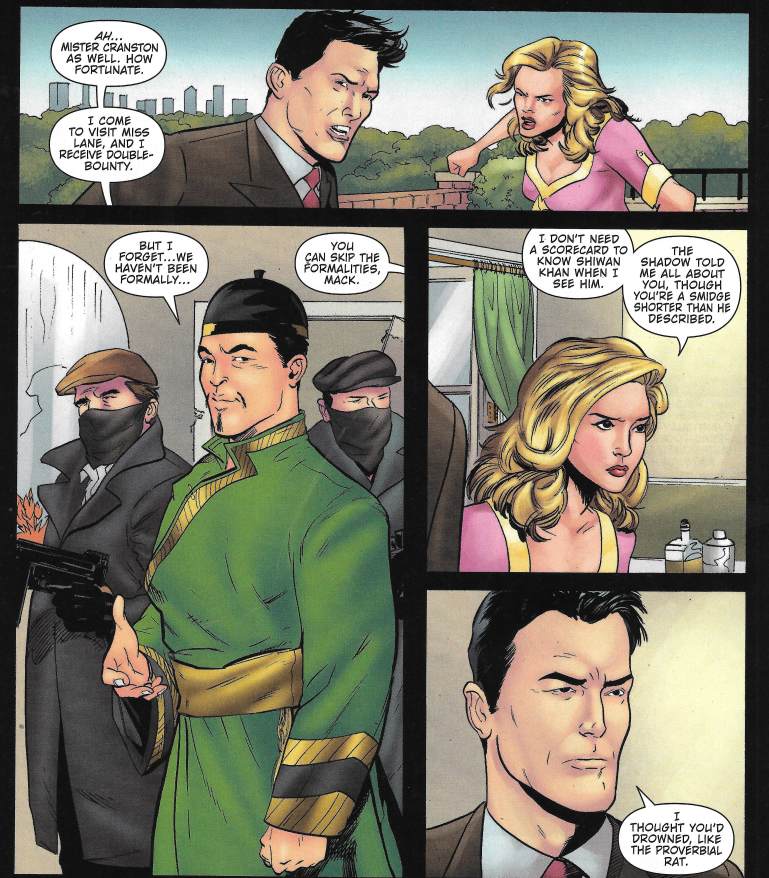 …Shiwan Khan, an old enemy of The Shadow. He expects them to be quaking in their boots at the mention of his name, but he’s got the wrong pair to provoke that kind of reaction. 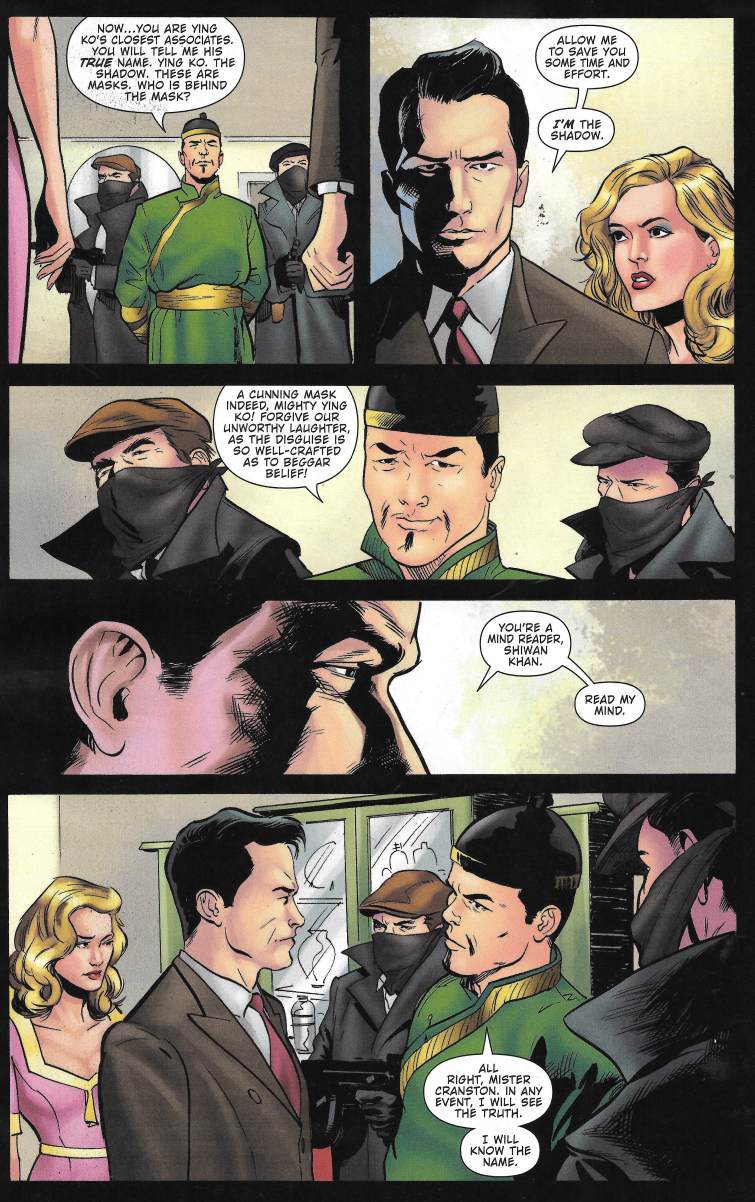 Instead he gets Allard/Cranston claiming to be The Shadow, almost as if Allard desperately needs his hero identity to complete some missing part of his own character. He goads Khan into reading his mind. Khan agrees. 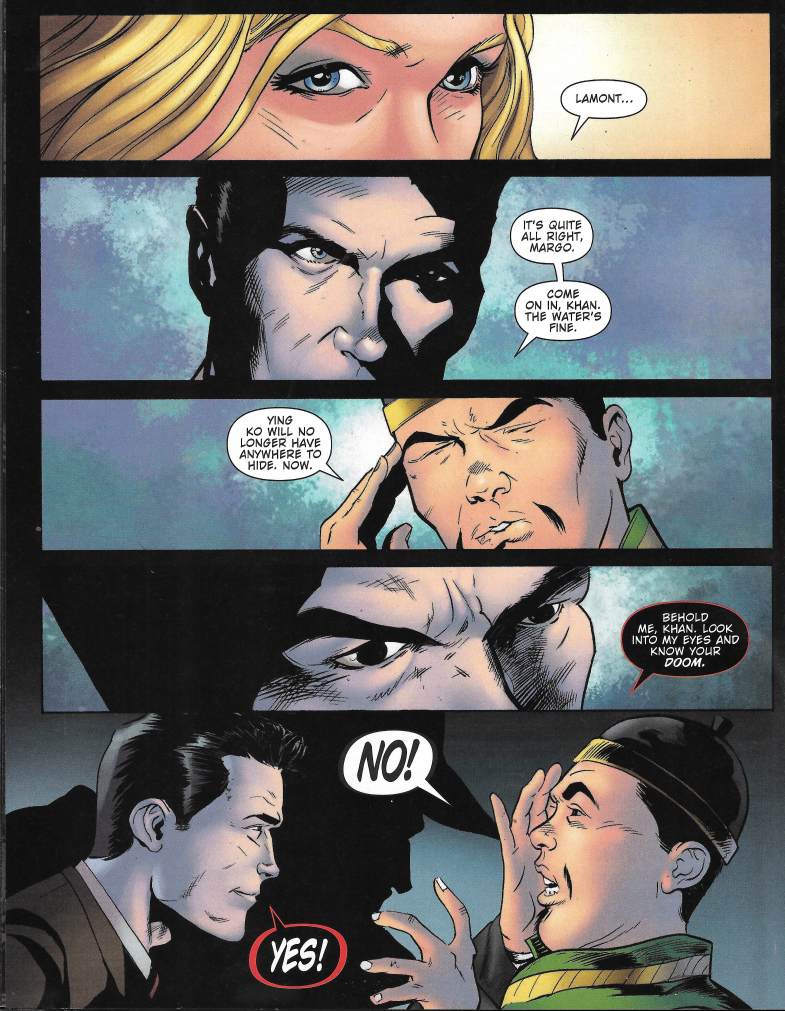 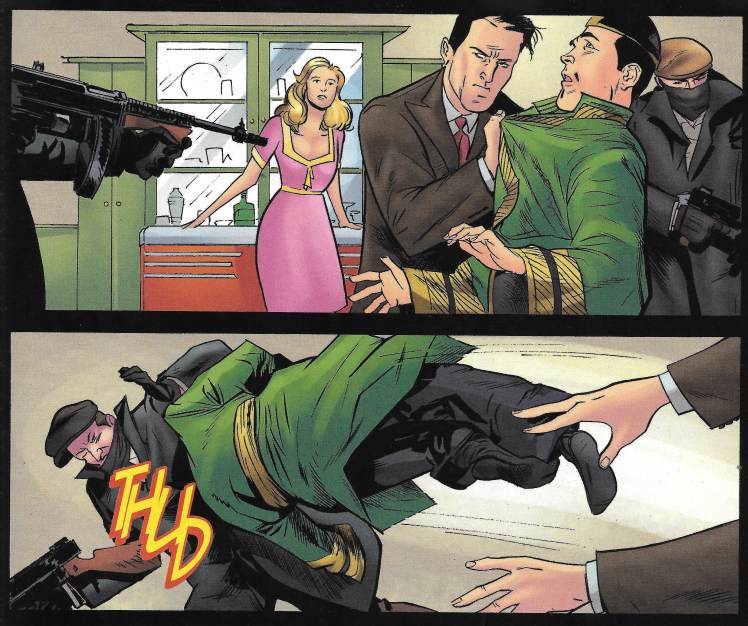 Margo joins in by bashing the tommy-gun totting hood with a seltzer bottle, as Khan pulls a knife and goes in after Allard Cranston again. 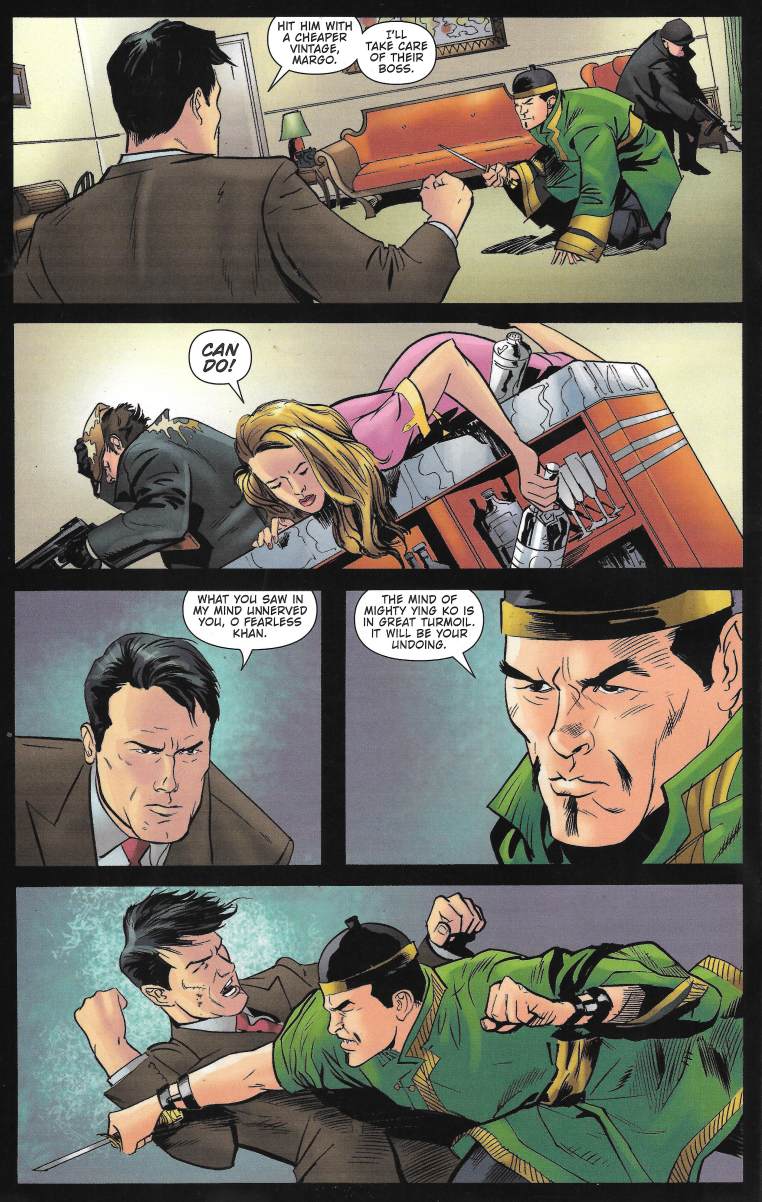 It’s right in the middle of this fight, which is great and all, that I really felt an appreciation for the inventiveness on display in this issue. It’s a good story, which is primary. More than that, it makes commentary on the characters through the use of the story, discussing things like identity, motivation and purpose. It is rare you find books that you can enjoy on two or more levels, but leave it to one with Twilight Zone in the title to do just that. The TV show, at its best did that. It made you think, ask questions, and consider your own morality and choices. I’m glad I grew up with Twilight Zone. It will always be top-notch entertainment. 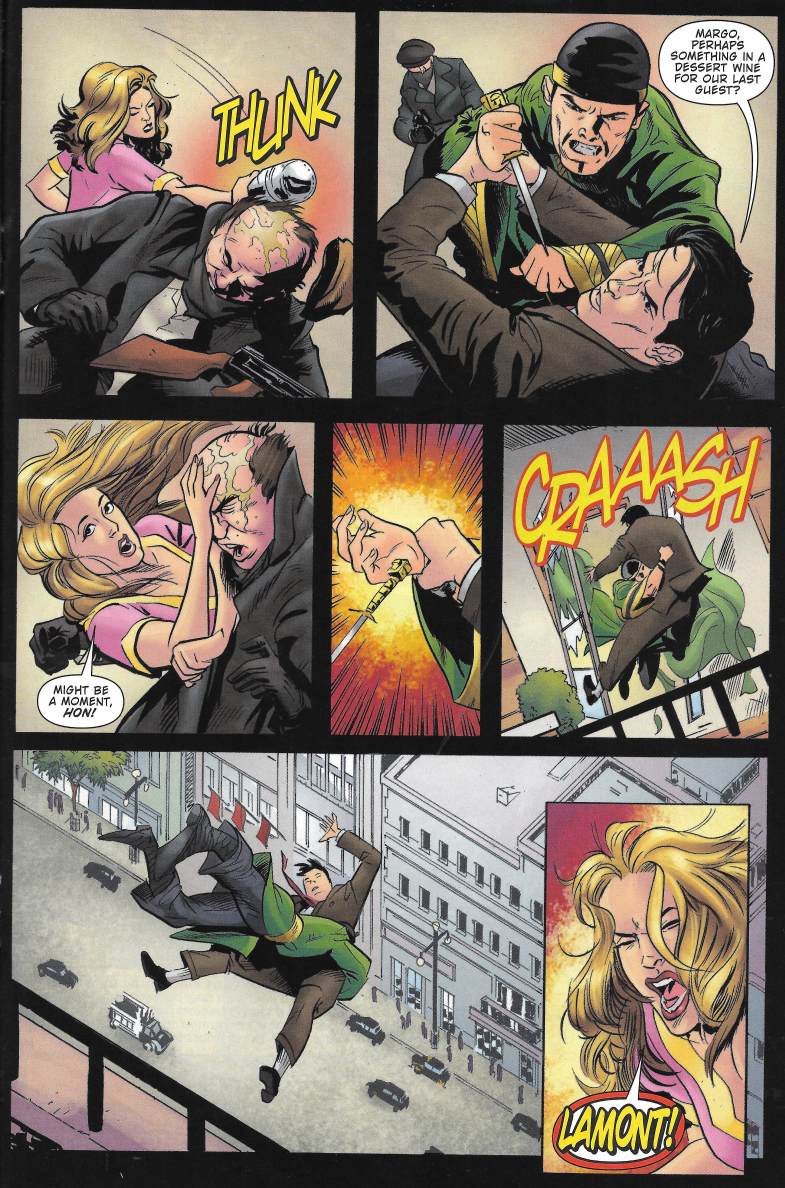 …well, that was unexpected. As is what happens next… …because that young man in mirror, the body into which Allard/Cranston/The Shadow has now “Quantum Lept” into, is Preston Springs, an amalgam character as far as I can tell of voice actors Orson Wells, Bill Johnstone, Bret Morrison, John Archer, and Steve Courtleigh. All of them people who played The Shadow/Cranston at various points in the radio drama since 1937. A radio drama that started in September of that year and didn’t go off the air until December 26, 1954, a staggering seventeen years later.

And it appears that The Shadow is nothing more than a name in a script.

LOVE this opening issue. It is fun and thought provoking, correctly balancing the tone of both properties even though they are so disparate. The book entertains and enlightens in a way that makes me want more and to see where writer David Avallone takes the story. Stay tuned and I’ll show you.
Posted by SonOfCthulhu at 3:30 AM