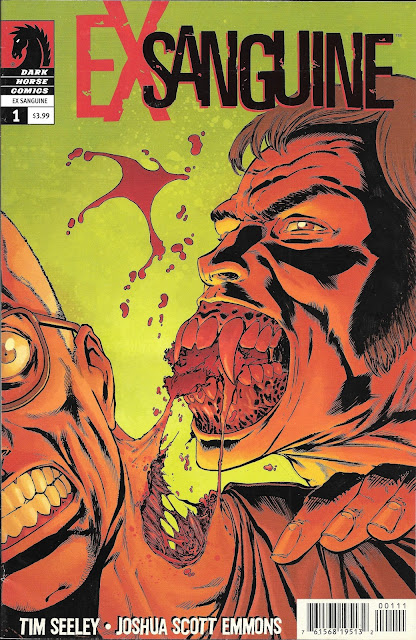 Get beyond that nasty cover, there’s a good start to a story

Looks like I kicked off September Sucks with a bang last time. The idea here is there are a buuuuuunch of vampire books in the crapbox and this will be my once a year clearance on all things that suck. Let’s face it, September has very few things to recommend it, anyway. School starts back up, Summer is typically making Texas feel like ants under a magnifying glass and current events (nukes, ‘canes, and fires) are guarantees that no one is having a good time.

That makes it the perfect time to unload these bad boys before we start into the month of Halloween and my post-a-day horror extravaganza.

Up next for you to sink your teeth into is collaboration between Joshua Scott Emmons (of Yaiba: Ninja Gaiden Z) and Tim Seeley (Lots of Bat-books, G.I. Joes and other various works). Given this first issue, I’d deem these guys a successful duo, although not having more than the story setup might make that premature. I did like what I got out of the book, an unconventional vampire story that I found intriguing enough to wish for a second issue.

Let us bypass that rather gory cover and get to the pages beyond, shall we?

We start deep in the middle of an ongoing scene. This poor man is strapped to a metal table and is being asked something by a figure in shadow. The figure is using an old school quill to poke holes in the man’s arm and then write something in a journal when he answers. They’ve barely gotten started when we open yet the torturer takes a quick break. 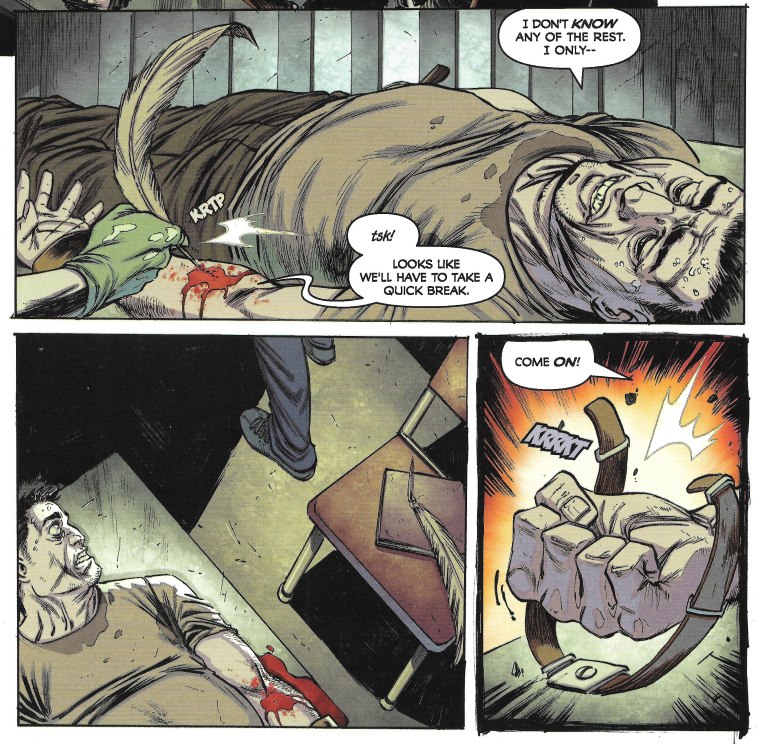 Which allows the victim to get free. But instead of leaving right away, curiosity gets the better of him and the goes back to see what the person was writing. 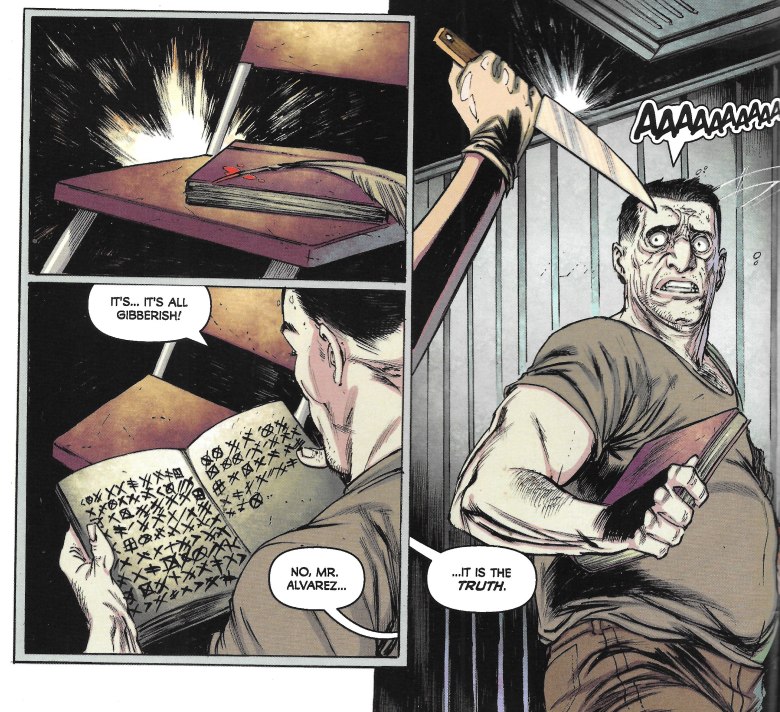 Which ends up being a fatal mistake for Mr. Alvarez.

I’m eyeing that story hook being dangled quite hungrily at this point. Why is our vampire torturing people? And using a knife? And the info is he/she looking for?

FBI agents Quinn and Franks are thinking the same exact thing. Quinn goes by the book and forces Franks to follow up on all the leads in the neighborhood where the body was dumped, which brings them to this gentleman’s apartment. 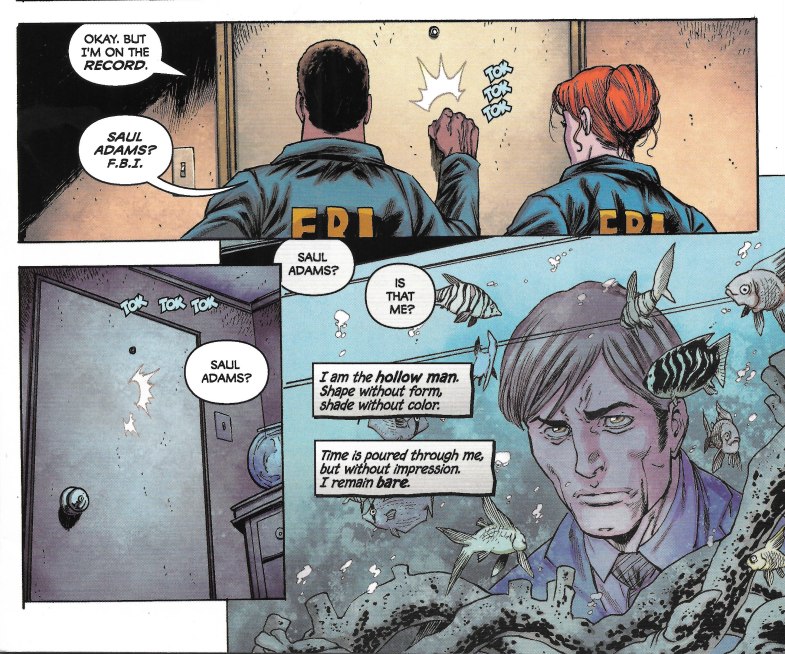 Yeah, he seems a might creepy with his “hollow man” internal monologue. And that monologue goes on for a bit as he recounts what looks like ancient history. I’m betting he’s our vampire. Also all this remembering takes a bit to shake out of but when he finally does… 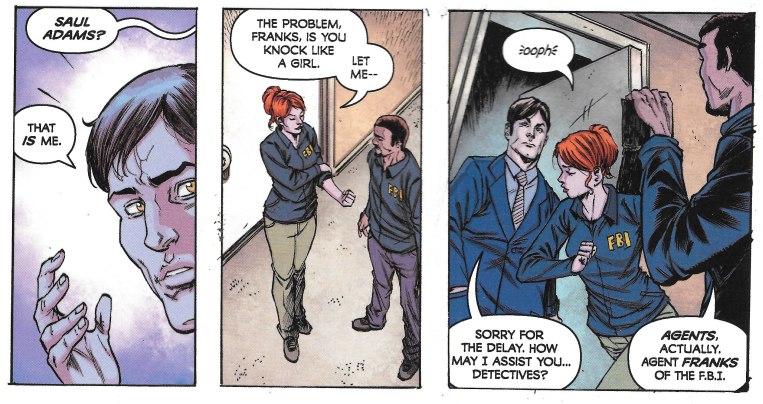 And after giving him an accidental elbow to the midsection, our two agents start to question him. They start by showing him an alleyway in the area that may just be a crime scene. 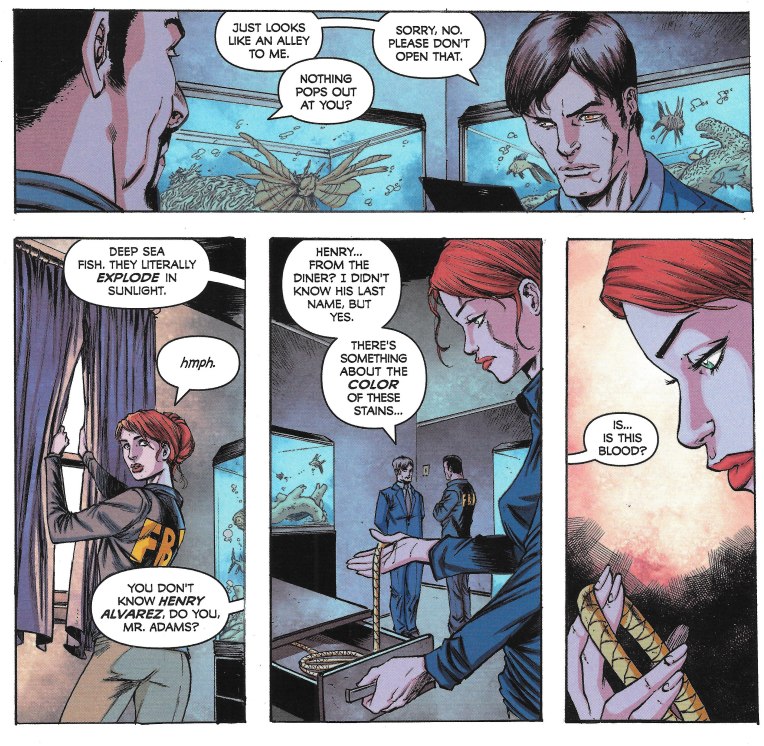 Lots of things going on here at once. Mr. Adams doesn’t want that window open because the sunlight would affect more than the fish, I'm sensing. Mr. Alvarez was our beginning victim, which means he’s dead if the FBI are about. Also implied by the questions and the blood, it appears the killer dumped his body in a nearby alley. Adams apartment location is in the wrong place at the wrong time. At least we think that until Agent Quinn finds the rope and then we aren’t so sure if Adams is involved or not.

Have to stop the action here and state I love this layered approach to releasing all this info. On first read, I didn’t pick up nearly this much of what was going on in the story, but now it makes tons more sense. Coming at any book, even one with vampires, means leaving the door open to be surprised, to allow the writer to subvert the stereotypes as they wish. That means you don’t take things for granted and in this story, that made me wonder if I was really looking at a vampire or something…else. Something close, but not quite. Hang with me a minute and I’ll show you what’s up. 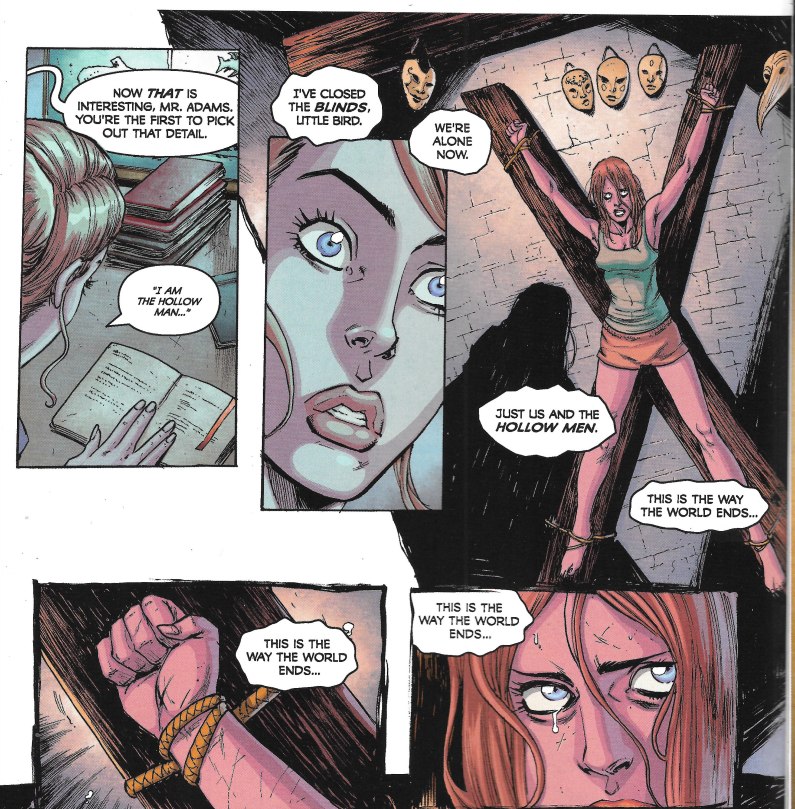 Quinn’s snooping into Adams writing has revealed a detail that tells more of her past than it does of Adams. Appears she was captive of a vampire once. Beyond a few panels, we really don’t get much info on how she escaped or what the resolution of it all was, but the phrase “hollow man” clearly sets her off.

She’s lost in thought as Agent Franks wraps up without giving away that Mr. Alvarez is no longer among the living. As the two end their chat, Quinn is in her memories and when Adams touches her here, she reacts by cursing him out for it. 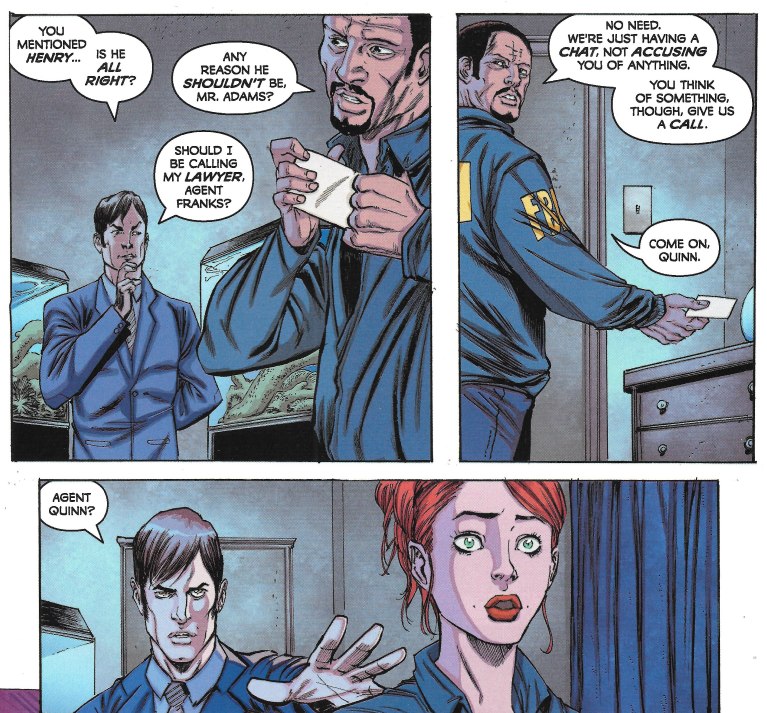 Adams goes back to his library while Quinn shares her belief that Adams is the killer with Agent Franks.

That evening, we find ourselves at Commonwealth Diner, the place where Henry Alvarez worked. Some regulars discuss Alvarez’s absence and wonder about a possible police cover-up. One speculates that perhaps Alvarez was killed because they were all questioned and wonders if there is some kind of serial killer at work. That perhaps the police are suppressing knowledge of the case so as not to inspire copycats.
At that moment, in the background, in walks Adams. He heads past their table to the diner counter. His regular waitress isn’t covering though and
we have this neat interaction between him and the new hire. 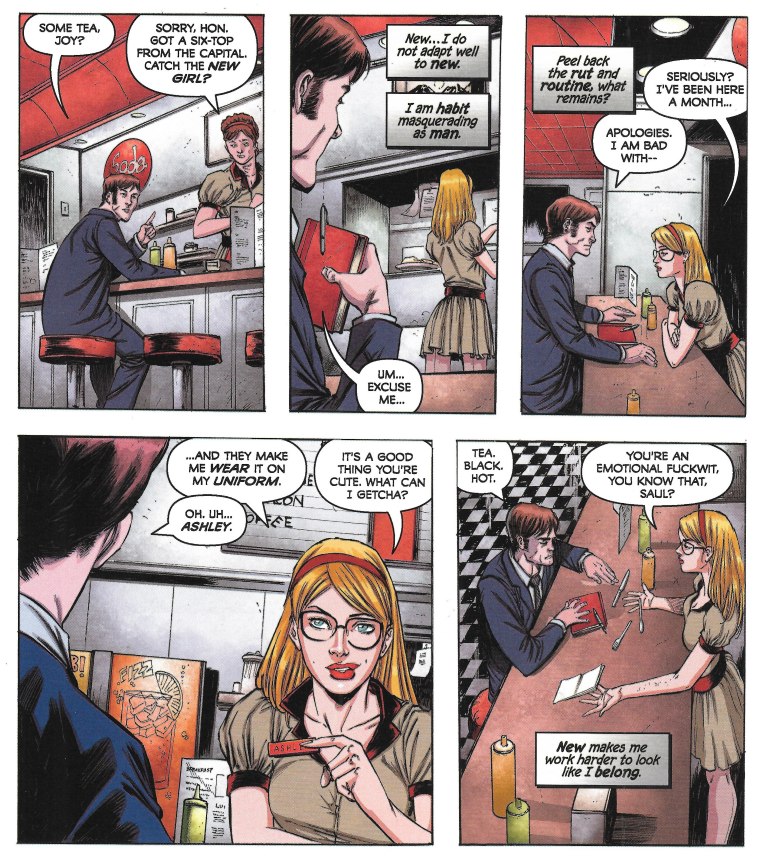 Although maybe she isn’t all that new of a hire. I see some sparks there too. Too bad he’s a crazed, merciless, vampire… 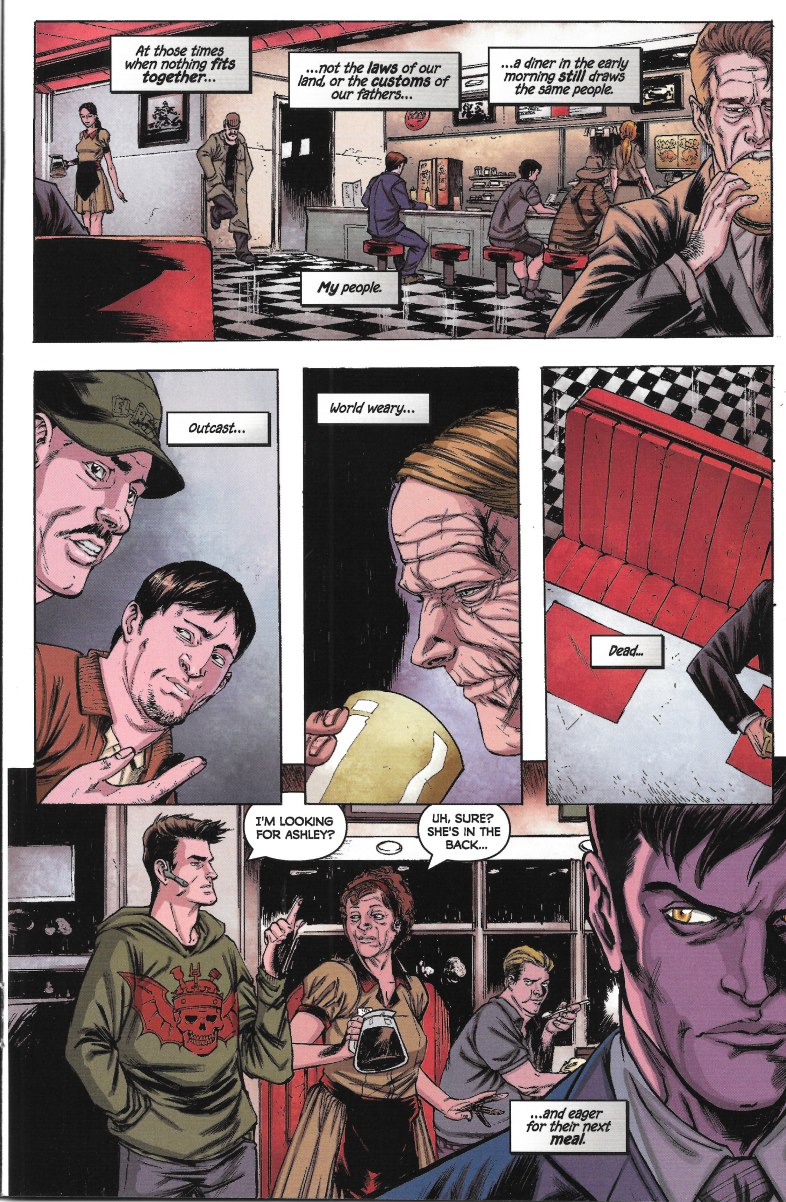 While Adams contemplates how well he fits in, new blood (ha-ha) wanders in, in the form of Ashley’s recent ex-boyfriend, Toby. 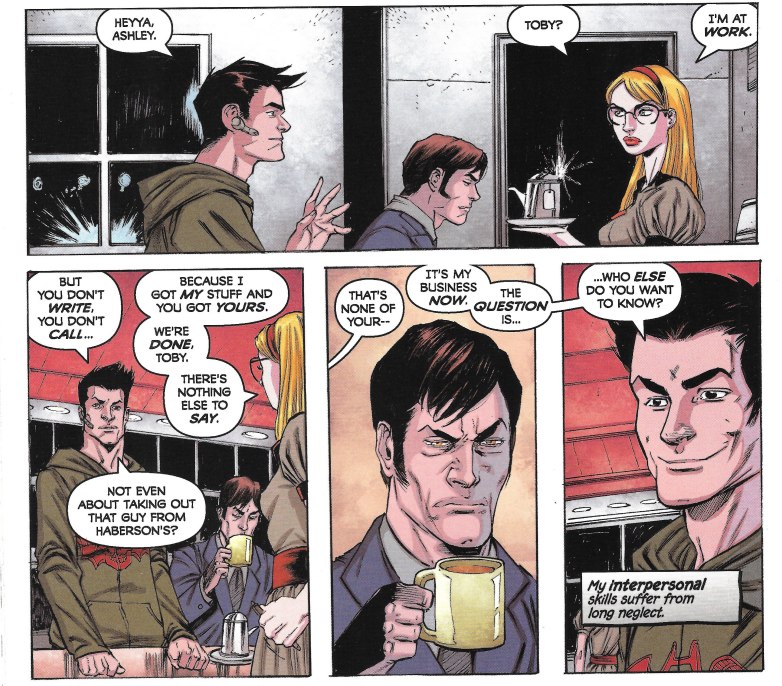 Toby makes like a MAJOR dick, asking why Ashley hasn’t kept in contact (she left you, dude. Move on.) and then threatening to expose something embarrassing if Ashley doesn’t reconsider their relationship. Adam is unfortunately stuck in the middle of this conversation. 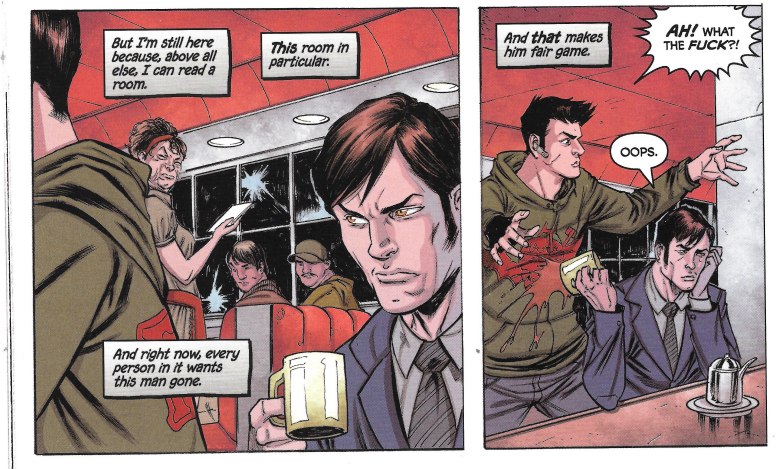 And it appears Adams isn’t as meek as we first read him. He purposefully douses the douche-nozzle to get him off Ashley and the diner’s collective backs. It’s a neat little scene. That even while trying to blend in, Adams would knowingly make a spectacle of himself without hesitation says a lot about how self-assured he is.

Not only that, but the tea he has hit him with serves another purpose as well… 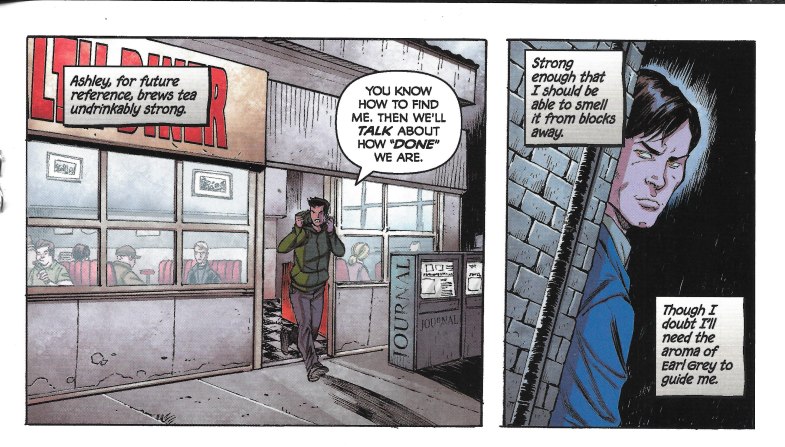 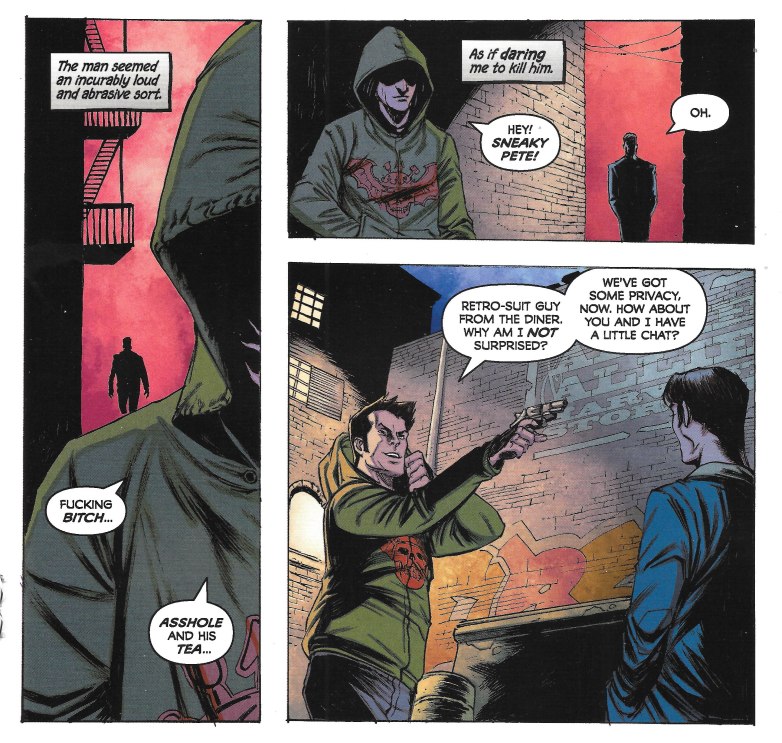 First our lover-boy has Adams empty his pockets, the only contents being the journal we saw him writing in earlier that freaked out the FBI agent so much. After casually tossing it on the ground, Toby goes on to warn Adams that with two killings in the neighborhood, he out to be a little more careful or he’ll wind up dead. Adams informs Toby there have been three murders and that he isn’t here to white knight Ashley. Which means he’s here for a lite snack?... 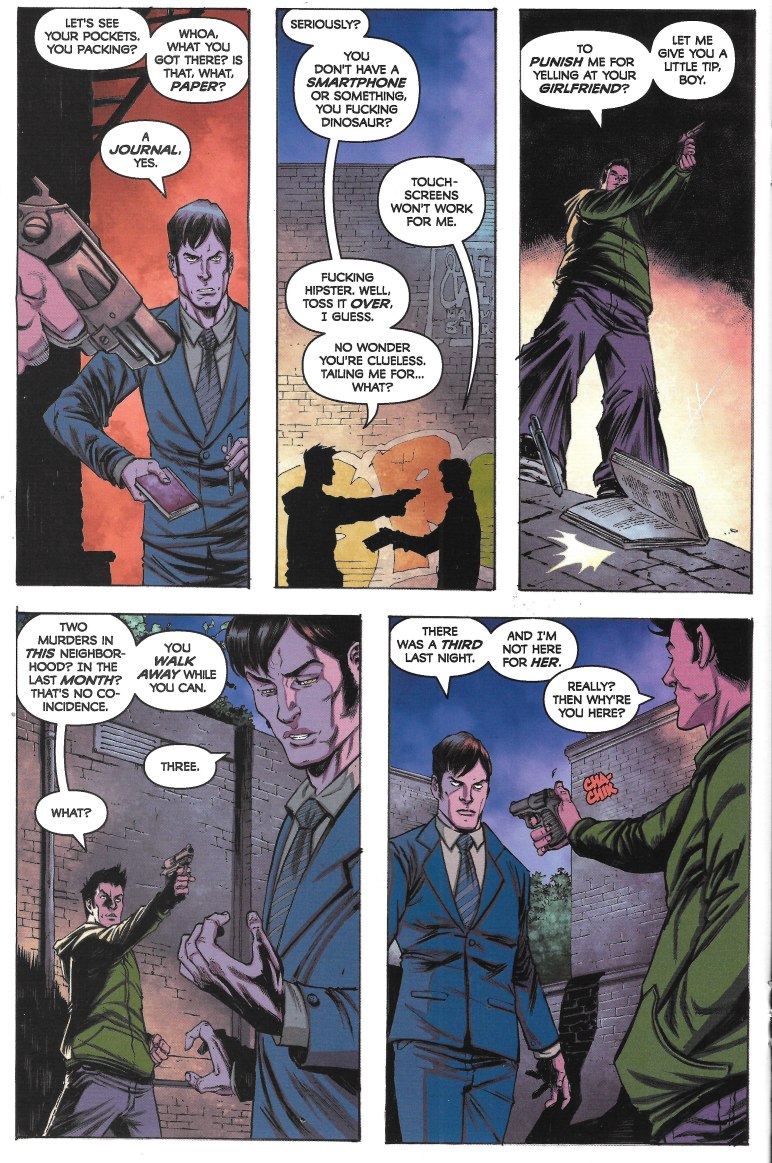 Adams goes full on vampire, pulling some next level black magic shit by blocking all Toby's bullets. He’s just about to sink his fangs into the guy when Toby gets taken out off panel by an unknown assailant. Guess who? 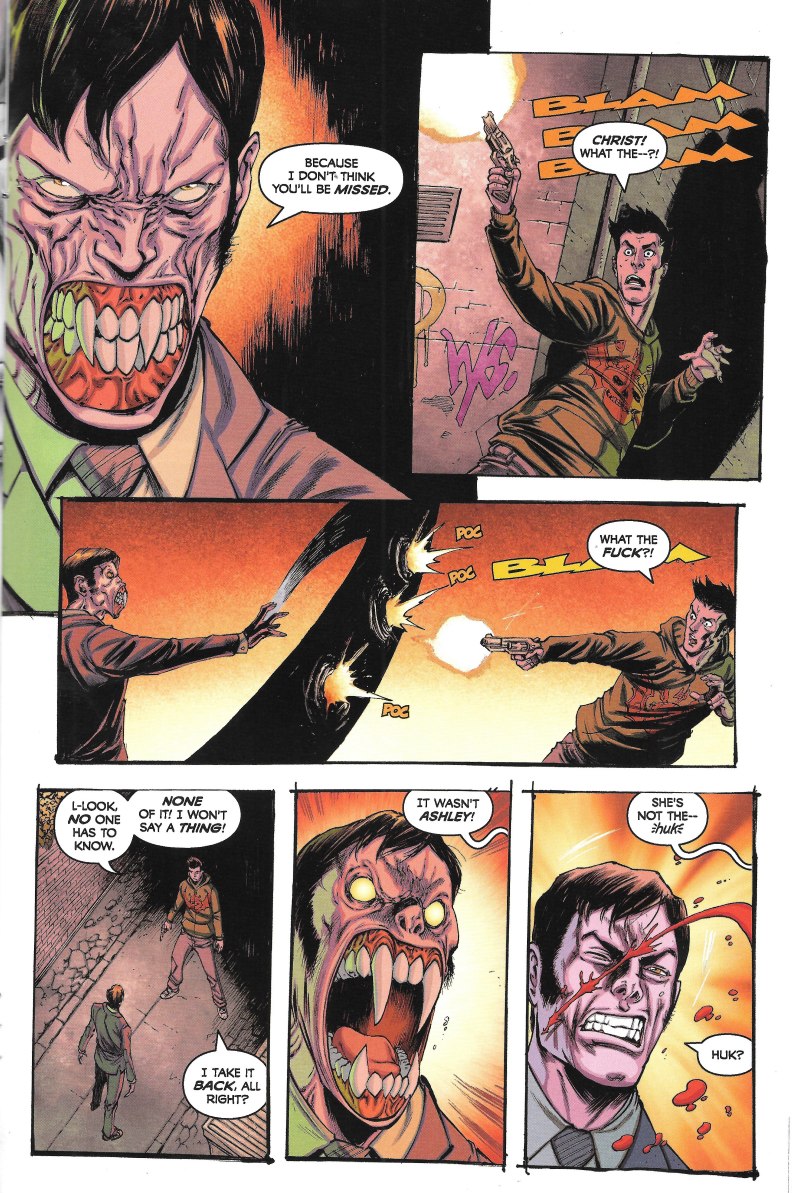 Wait! What? ASHLEY is the killer? Ashley murders her ex and then goes on to explain that she doesn’t mind what Adams is because she has “a monster inside” too, making her out serial killer who likes to write crazy words in people’s arm blood before murdering them. 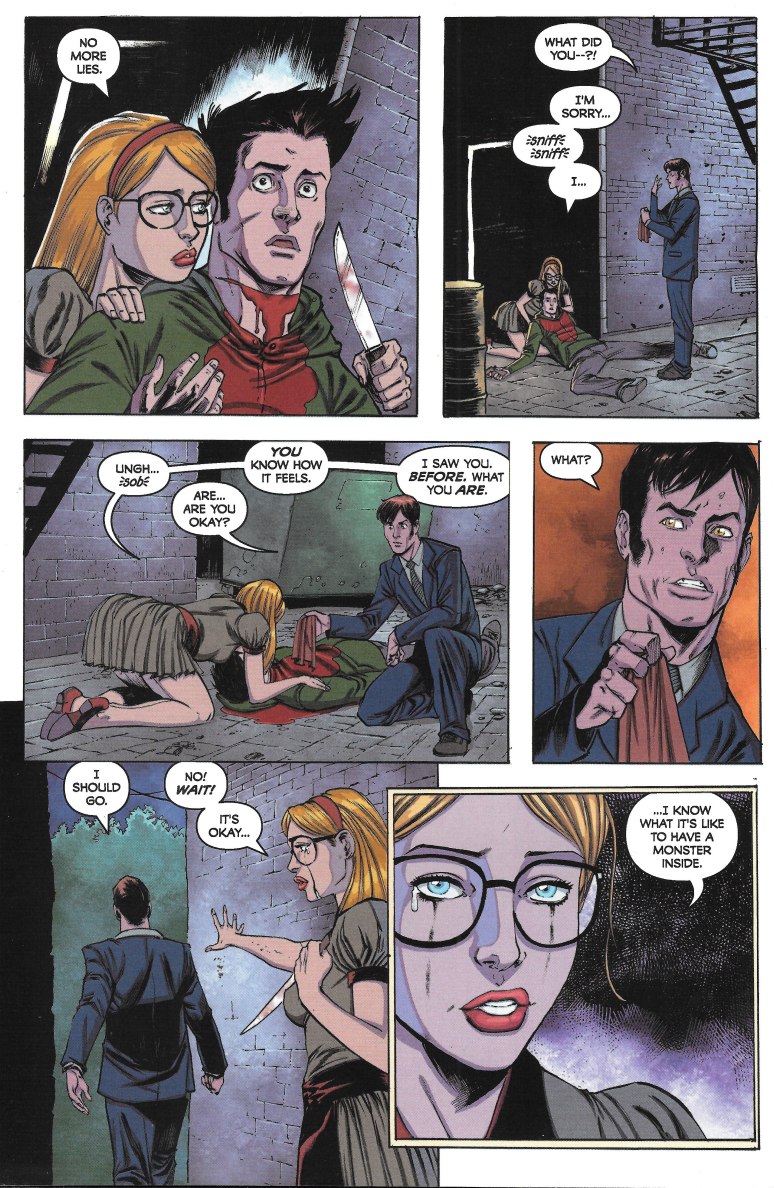 This book has taken a hard right turn I did not expect. It also has kind of gotten me hooked into the story premise. Where will this end up going? Will Adams turn her in to save himself? Will they team up? What is Ashley even trying to do with her odd questions and “creative” writing assignments? I’m intrigued with the promise that this might turn out in weird and interesting ways. Great job on a standard vampire tale. 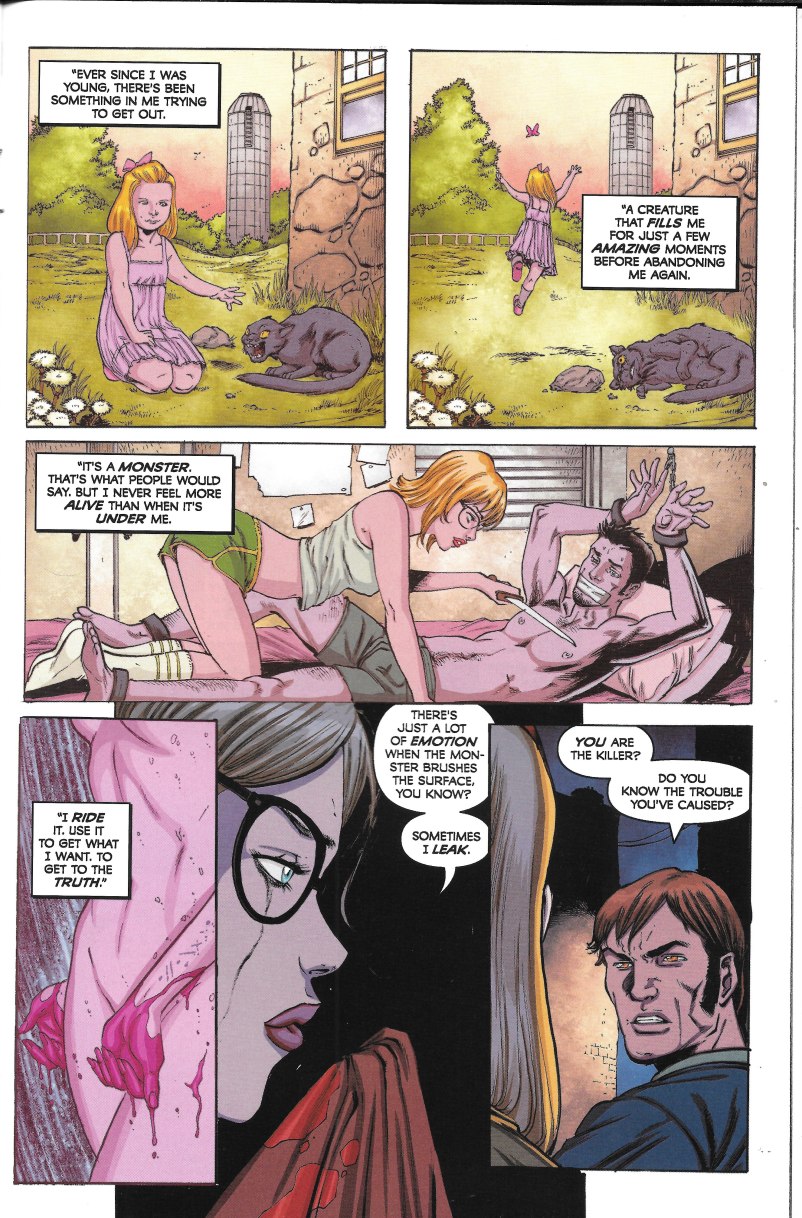 Where we go first is for Ashley to extend an offer of teaming up to get at what she is after. 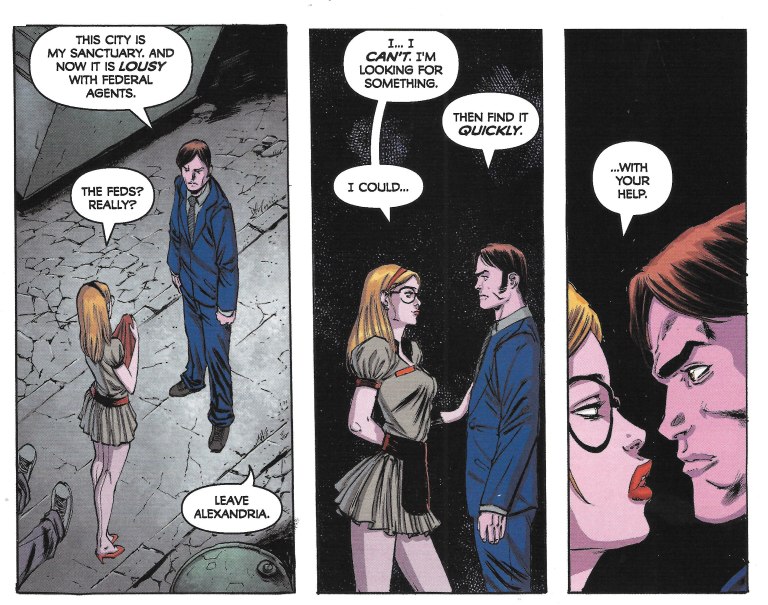 Adams wants none of it though, as her random murders are chumming the waters for those shark-like law enforcement people who would spell his doom. He pushes her off and warns her to leave. Note that he doesn’t kill her, which would be better at this point giving the police both their suspect and victim, so he has to have been touched a little by something she said. He leaves her in the alley instead. 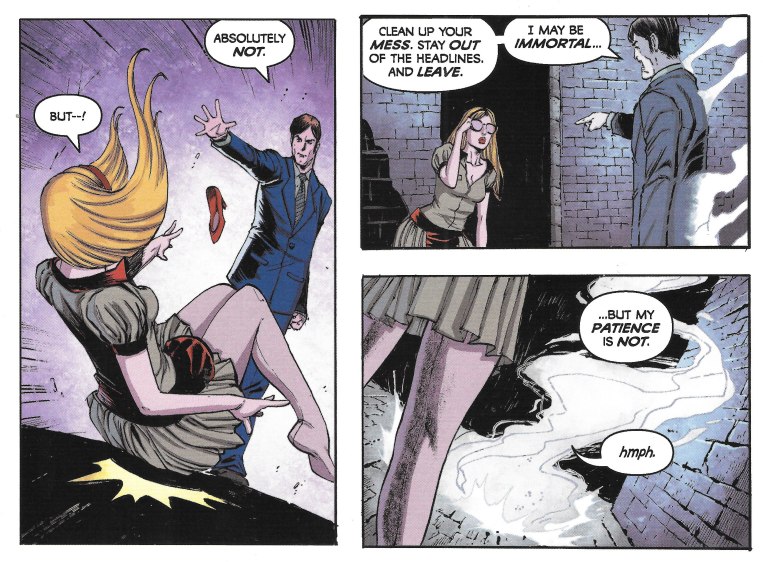 Ashley does the exact opposite, of course, making the crime scene an even bigger marker pointing to the other recent killings. And the FBI are all over it. 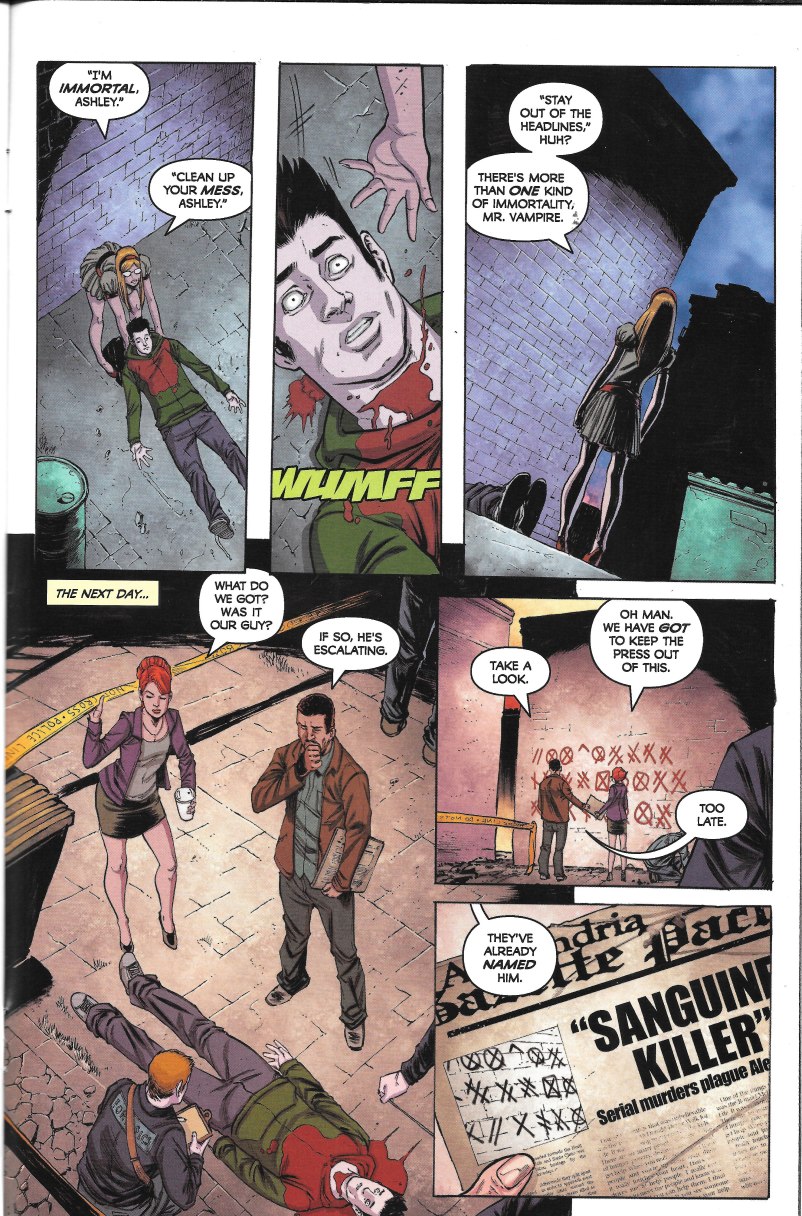 They appear to have picked up Toby before to ask about the killings, so are familiar with him and his link to the case. But the real clincher is finding a journal tossed aside in the alleyway and forgotten. 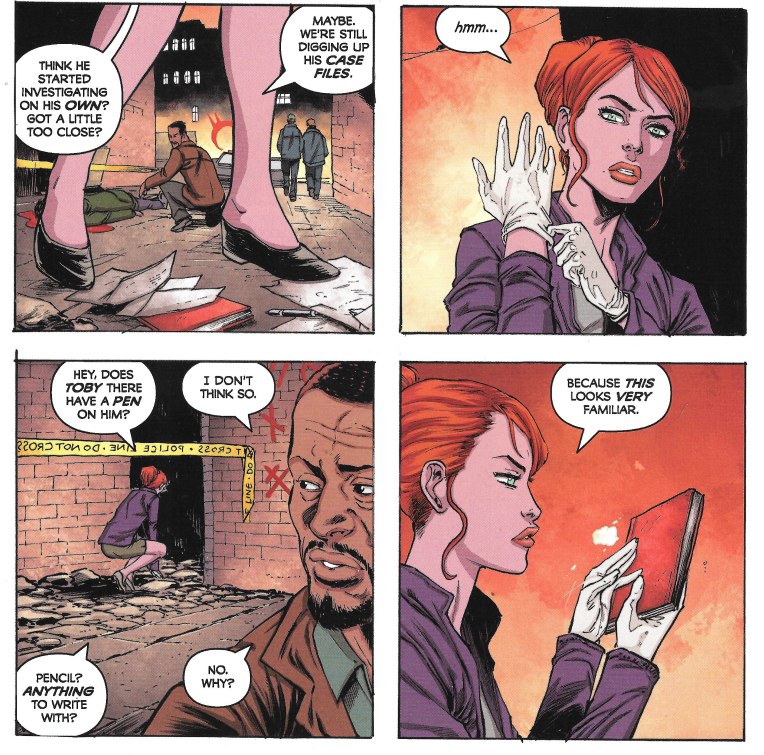 Saul meanwhile has been deeply disturbed by his meeting with Ashley and he can’t get her out of his head. 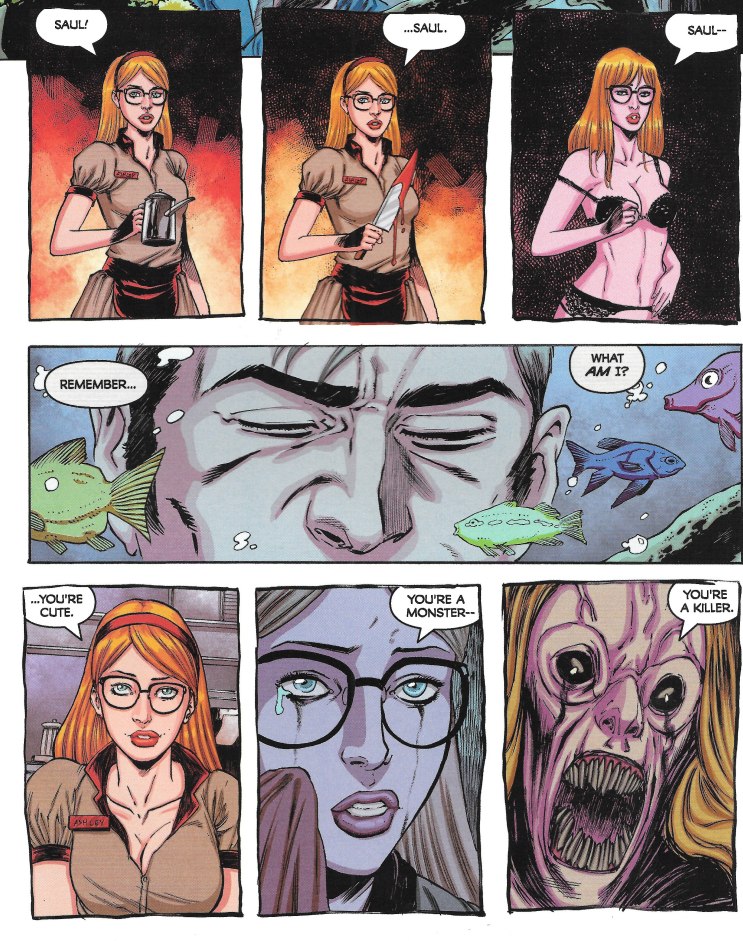 Which is a shame, since he’s about to have unexpected company returning some property he lost. Adams looks not long for this world. 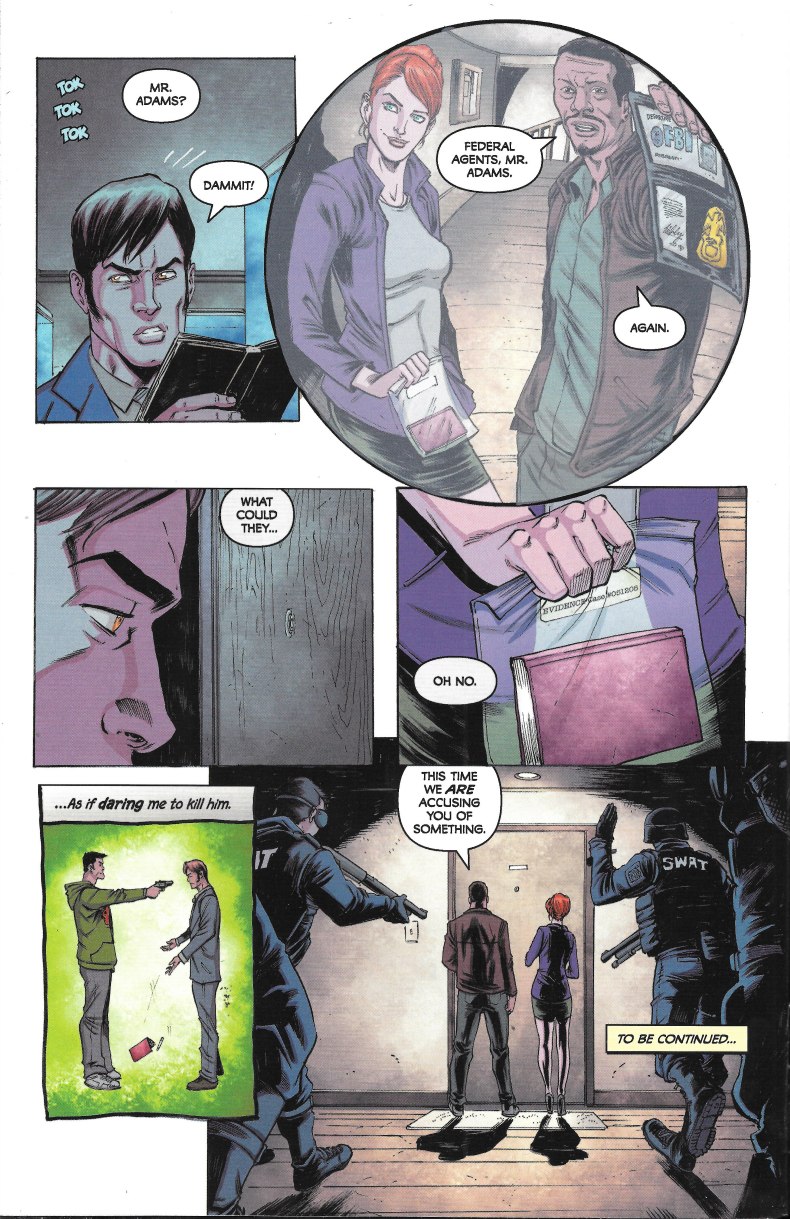 Great start to a series. The characters are intriguing and the plot engaging. I was a bit put off by that rather bloody and violent cover, thinking this book wouldn’t have any brains behind it. I’m glad that proved not the case.

I only wish the Crapbox had spit out number two as well, as I’d really like to see where this confrontation on the final page ended up going. Ah well, back to bins for that I suppose.
Posted by SonOfCthulhu at 3:53 AM