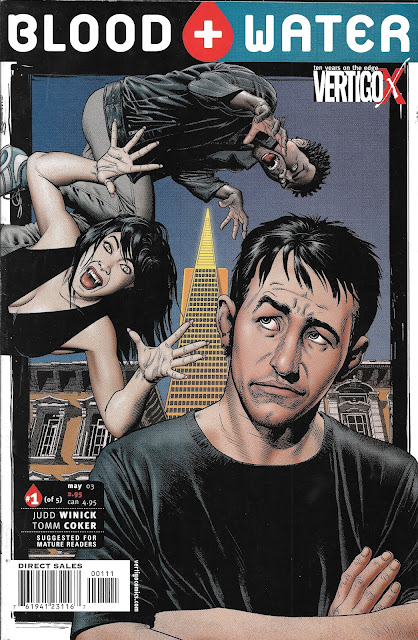 In popular culture, speculation about the symbolism of vampires and vampirism in stories has run the gamut from sexual repression and homosexuality to monopoly capitalism (that bit is from Franco Moretti.) What I had yet to see it represent in a story was a sign of hope.

The very idea that from unlife could come a better life is a bit startling. How horrid would someone’s existence have to be that being a blood-addicted rotting corpse be seen as a step up? Well, pretty bad off. And Judd Winick has the chops to put that story out with some haunting art by Tomm Coker.

I’ve enjoyed Winick’s books quite a bit, especially his stuff in The Outsiders, but Corker is a new one for me. He has shown up in Nightfall: The Black Chronicles in the Crapbox, but I will admit that I haven’t gotten around to those lil’ dickens yet. His work here is pretty stellar and I’m sad to report that wiki shows he doesn’t have many other series on his resume. Does make me curious about Daredevil Noir now, a title I had no previous interest it.

Any hoo! Let’s get into the meat of this: We start with Adam Heller’s past as a normal 18-year-old senior class president, state-ranked track sprinter with a pretty girlfriend and a bright future. 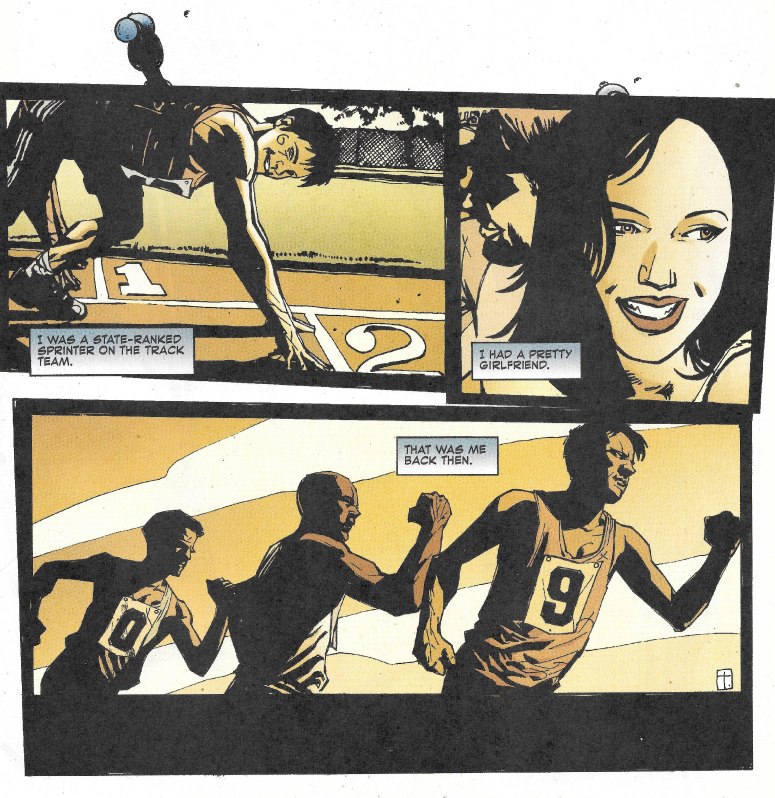 Fast forward to the beginning of our story and we find that this is Heller now. 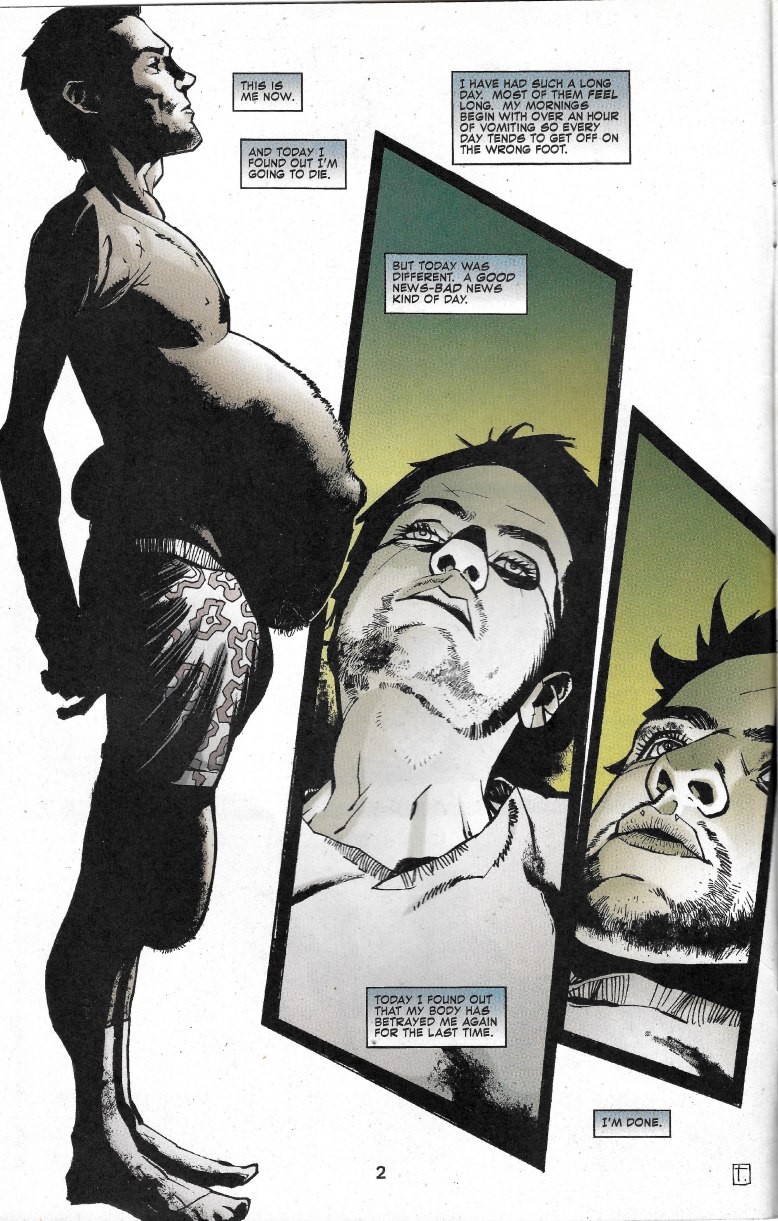 The ravages of human suffering and disease have twisted him into the mockery of his former self that you see in this profile picture. Beyond how upsetting this looks, Winick and Corker are about to take us through the step-by-step process of how a person can be broken down by their biology, how your body can betray you no matter how strong your will to live. Empathy is always a hard won commodity in any story and here they perform it with AMAZING effective. Adam’s struggle feels real. I’ll show you what I can for breviaries sake, but a book like this demands to be read, even if the other four issues of this arc do no measure up to this first chapter. 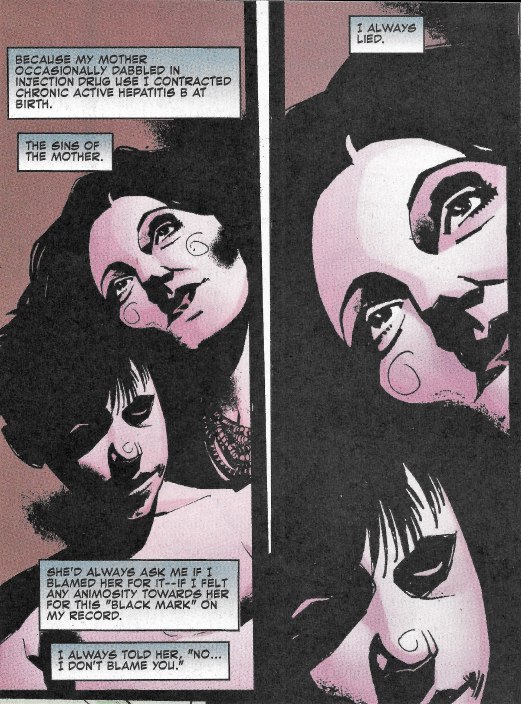 Adam suffered from a Hepatitis B infection contracted through birth from his mother. Adam grew up in a life with a lurking specter of death by disease hanging over him always, something difficult not to feel a bit bitter about. Until recently, none of really mattered. Then… 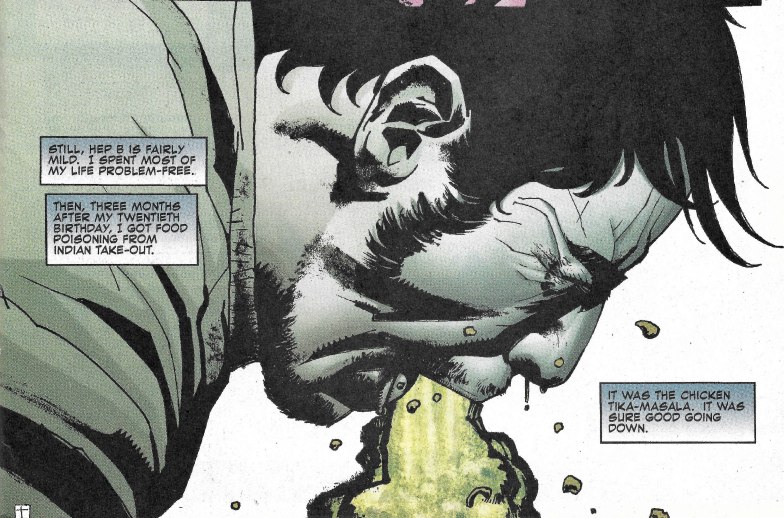 One meal changed everything for Adam.

Get that. One meal. In essence we are all one something away from the downhill side of a fatal body system crash, but this story really illustrates it in no uncertain terms. What followed for Adam could easily be any one of us. 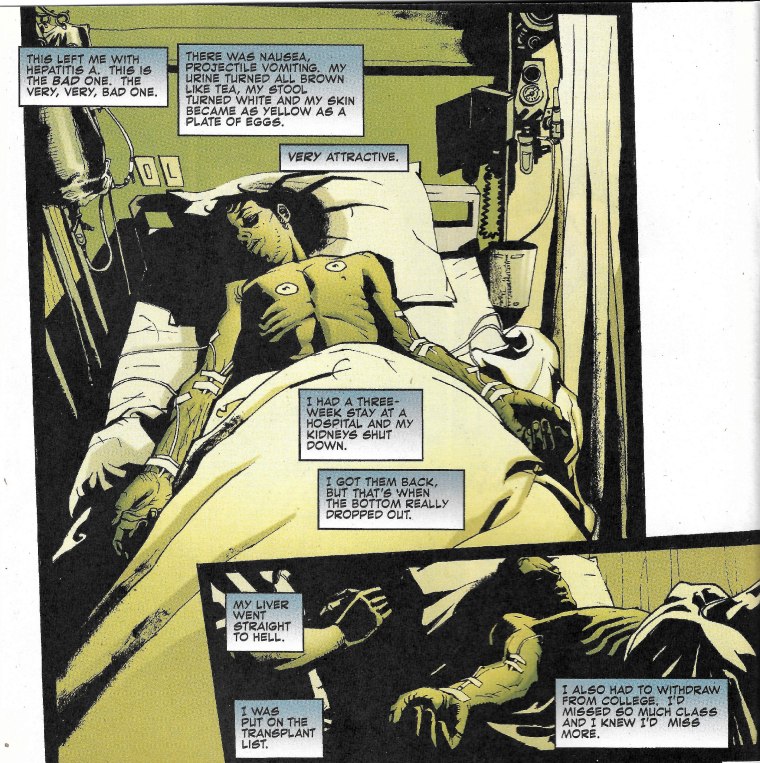 …the resultant debilitating side-effects and drugs did the rest to fully destroy who Adam is as a person. We begin our story here, with this lump of flesh containing the memories and broken dreams of Adam Heller. A person trapped in a cell he didn’t make, a place that he soon learns will kill him. 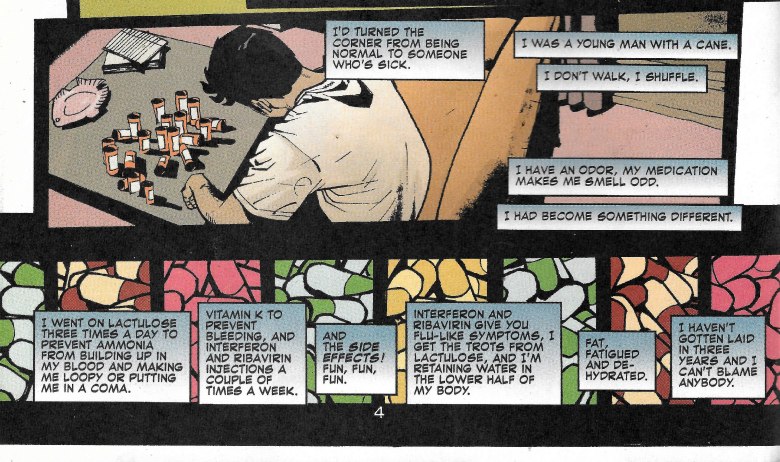 Inoperable cancer takes away whatever shred of hope Adam has of living out a normal lifespan. 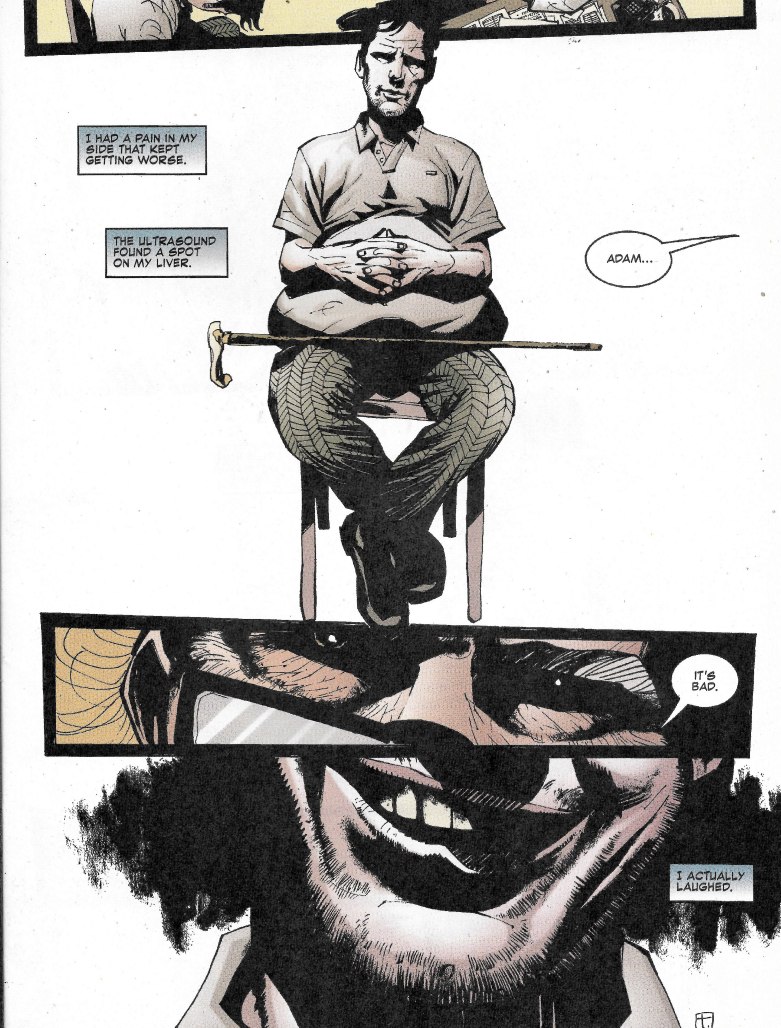 And at this moment Winick shines, giving us an Adam Heller that we can understand and root for. A man who thinks back about all that he’s endured and sacrificed just to stay alive in a way that is real and understandable. Between the words and the pictures, Adam’s fight has become our own. Even it if now becomes a fight to die with dignity and face the end on our own terms. 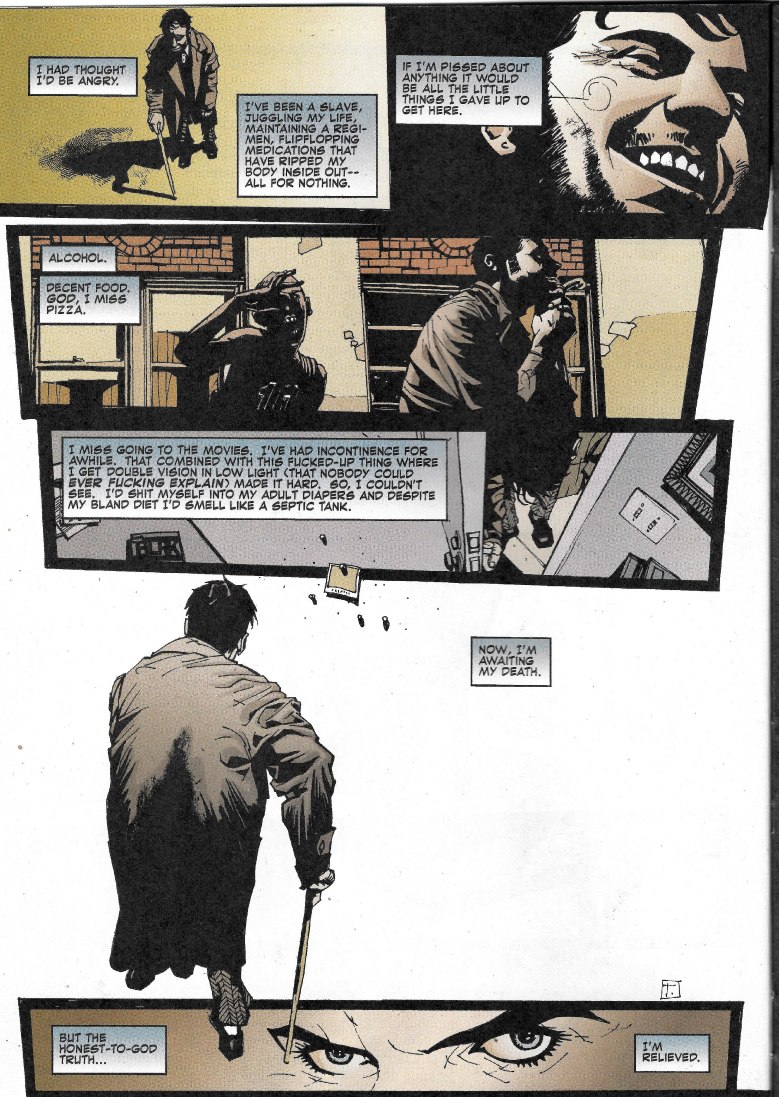 Into this story steps one of Adam's two closest friends. A person by the name of Joshua. 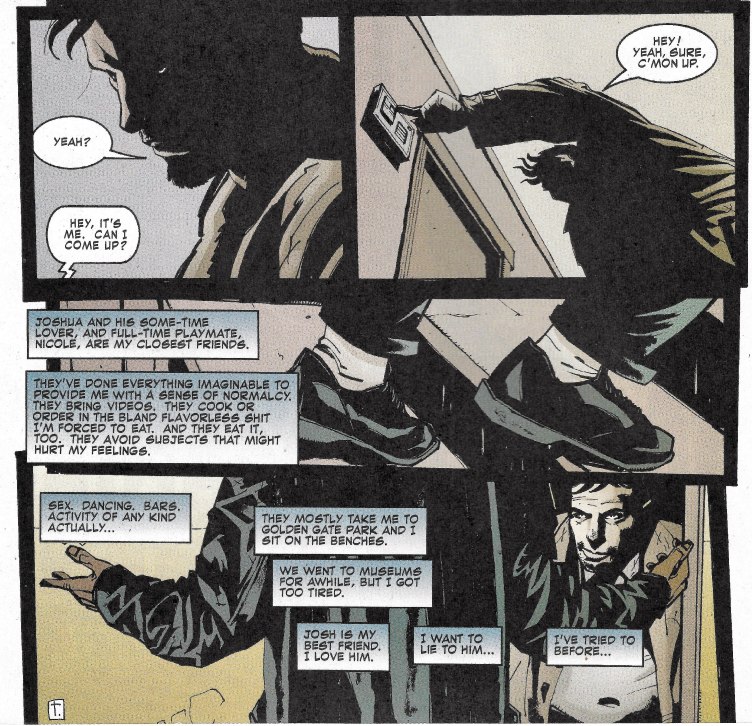 Adam can’t keep the news from Joshua, even if he wanted to, which I’m not sure is part of his outlook at this point. 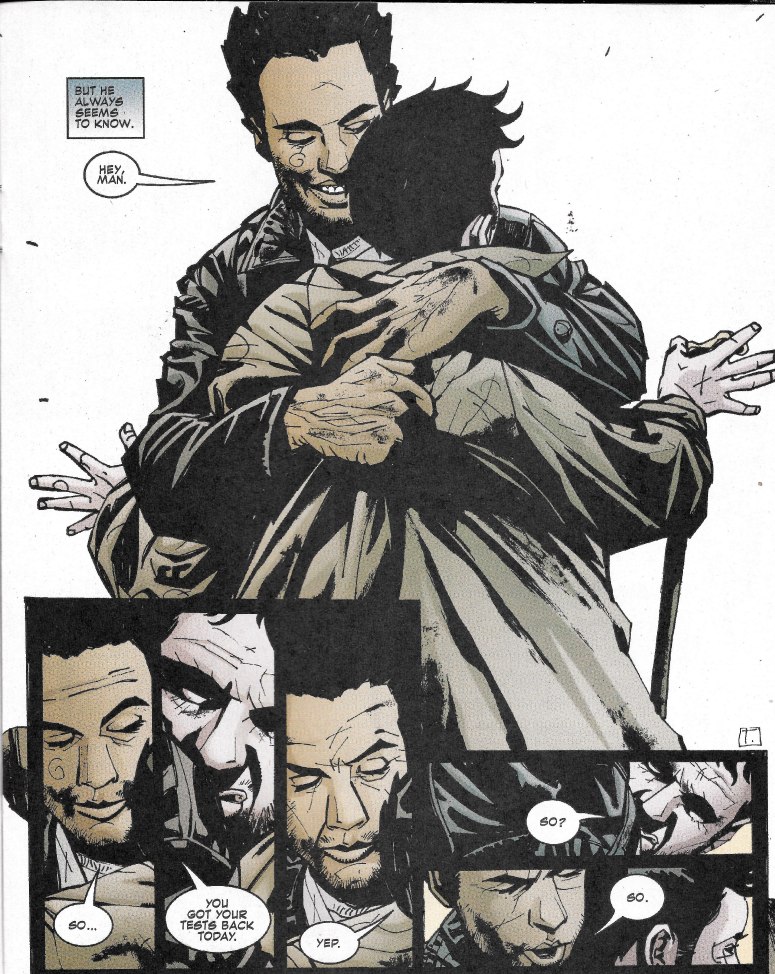 If you are thinking the book is bleak, yeah. 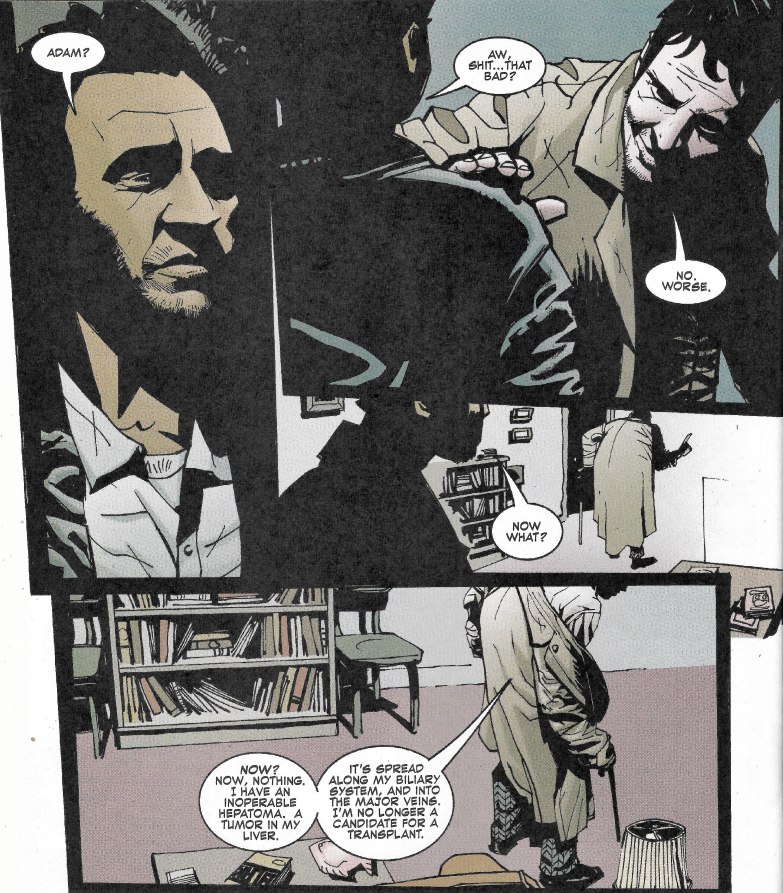 That’s an apt assessment, but it is right about here that we start changing up the possibilities a bit. 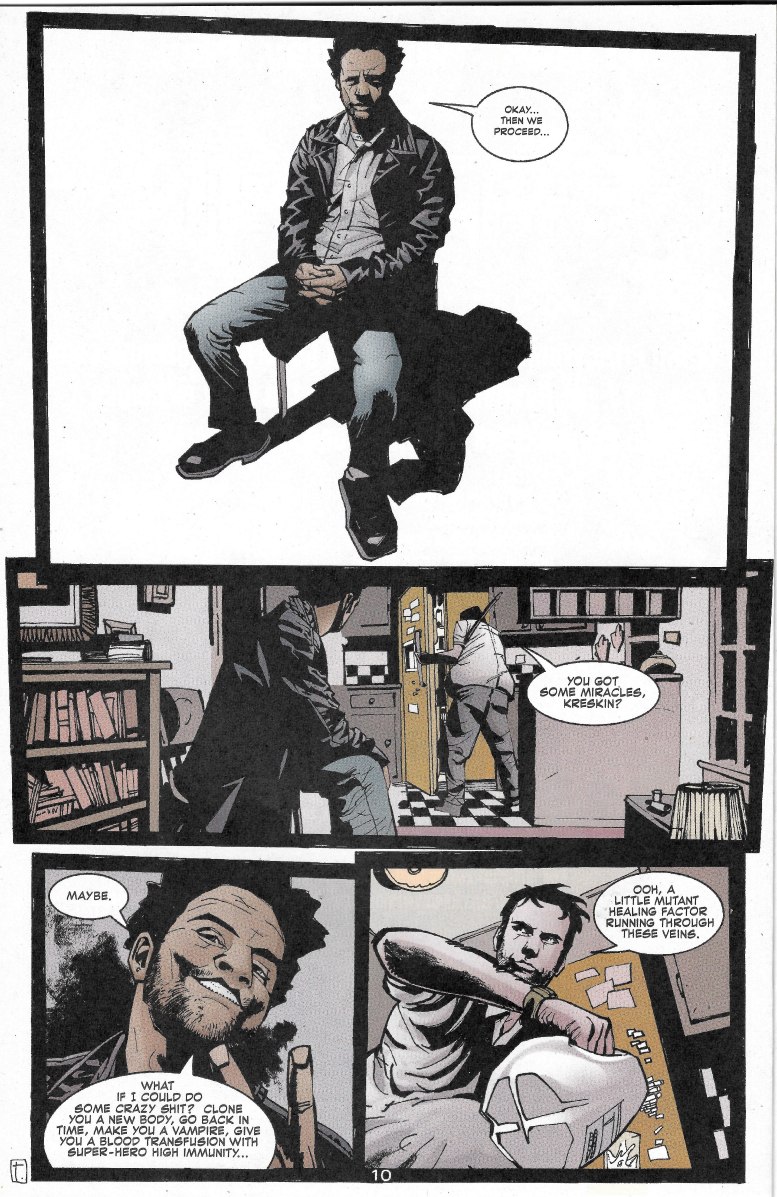 There is a ton I could say about effective use of white space, character positioning, storyboarding, etc., etc… but I know you people are getting all of that anyway. Corker exhibits a masterful sense of timing and style with all this. And into this quiet story of a man’s suffering, we now throw in the fireworks. 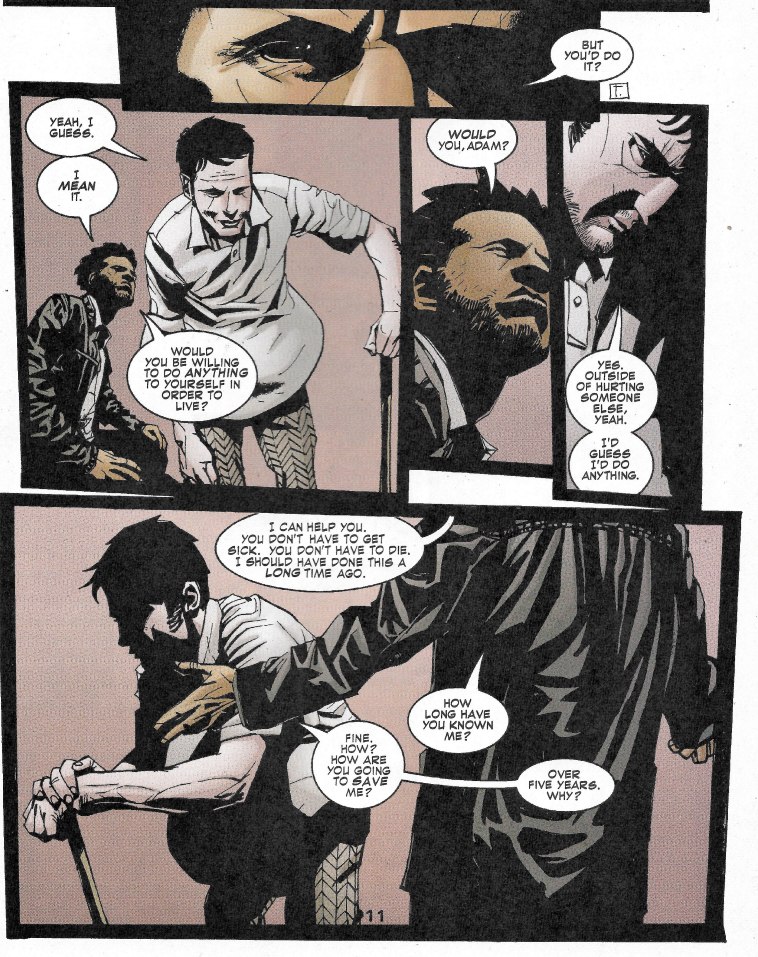 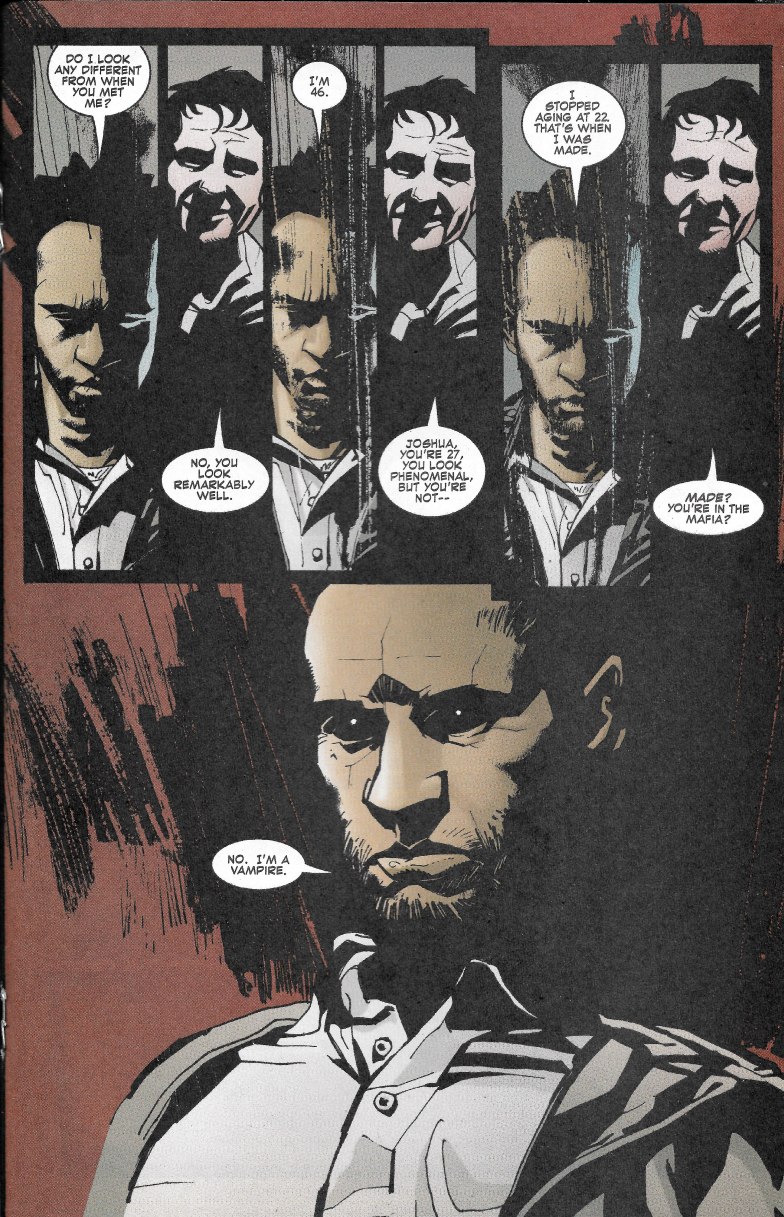 …done up in a splashy style with those black eyes reflecting tiny specks of light. 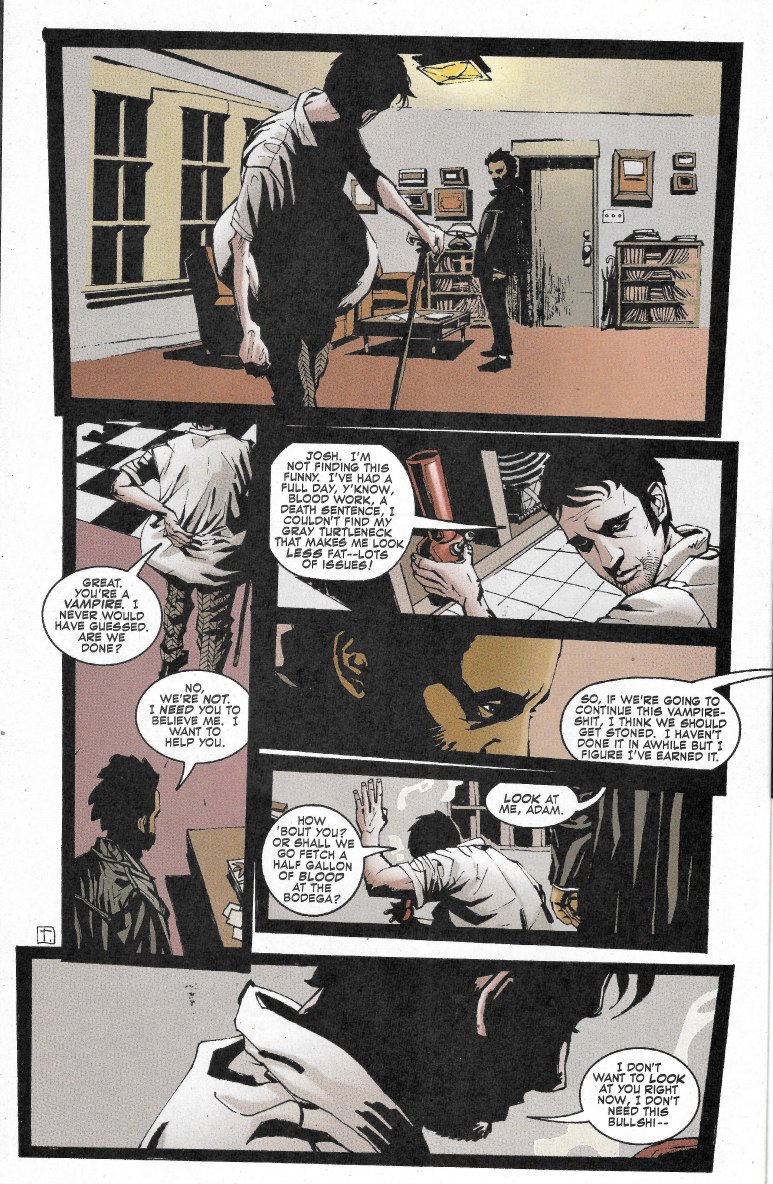 Of course, this is met with serve disbelieve.

Again with the blocking, pacing, panel layout…Hats off, Corker. Why are you not all over the place at this point? Amazing work.

Story-wise, Joshua has to prove his powers without it scaring the stuffing out of Adam. 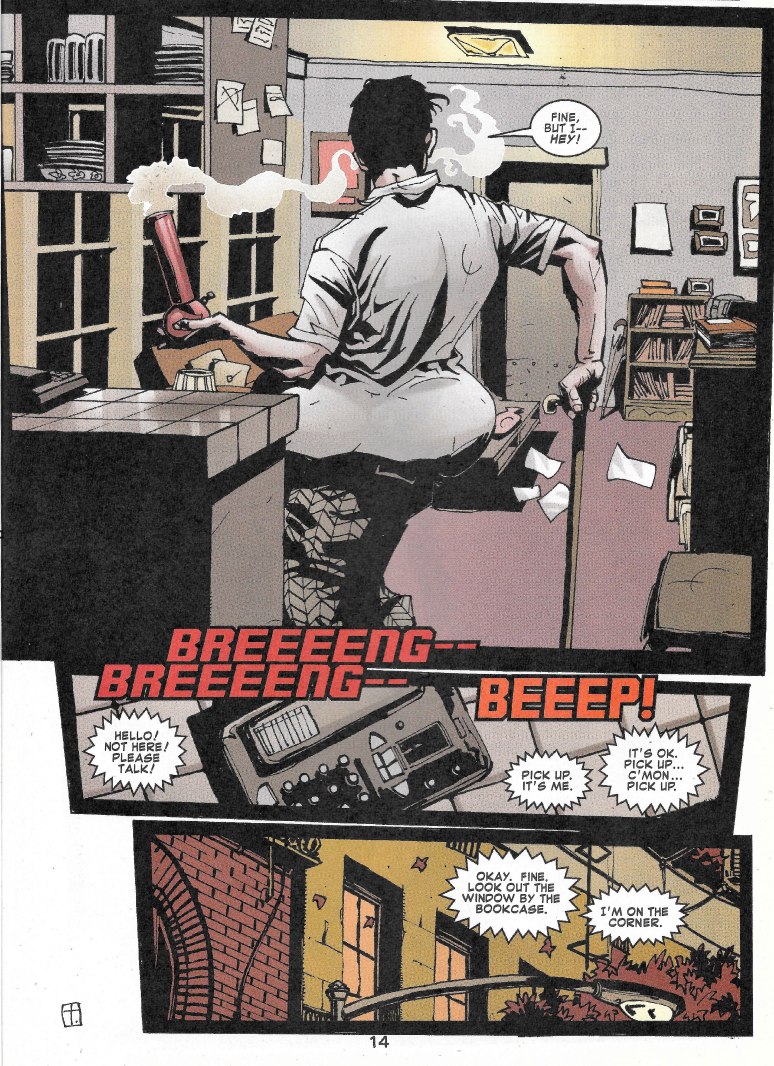 Disappearing from the apartment and calling from down the block? Seems pretty non-shocking, right? 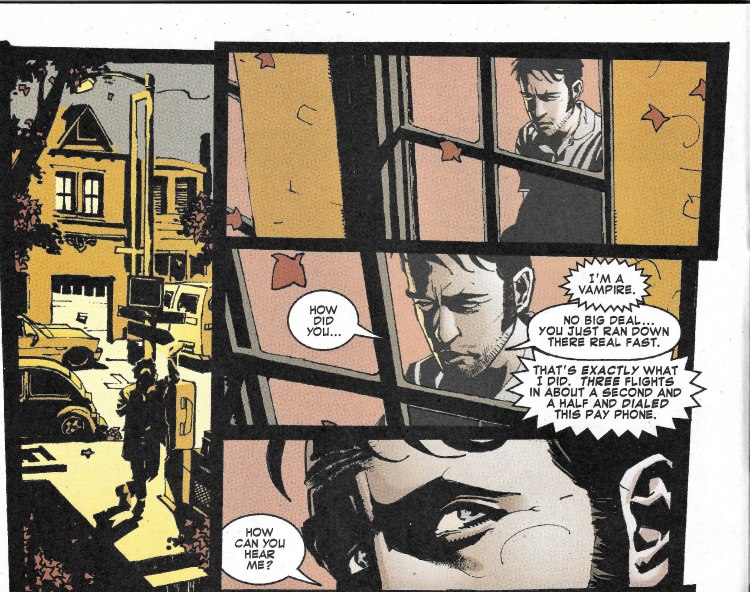 …but when that fails to really sink in… 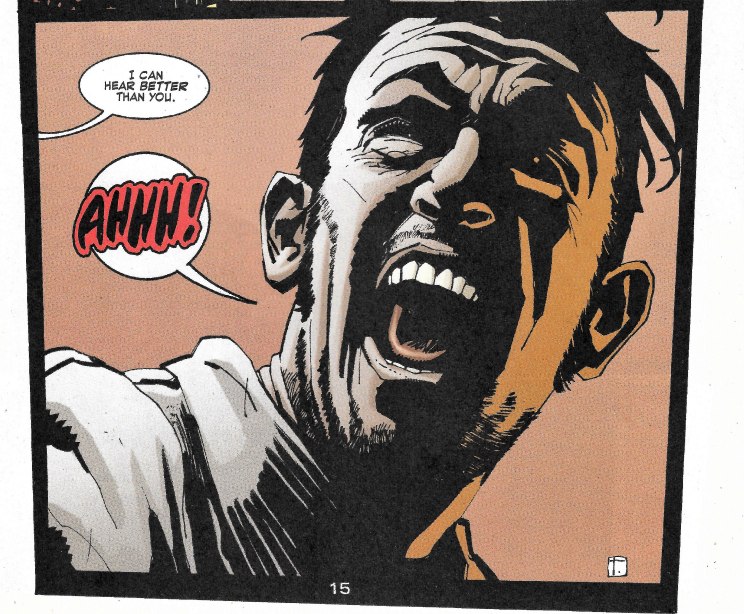 …maybe try something a little on the extreme side. 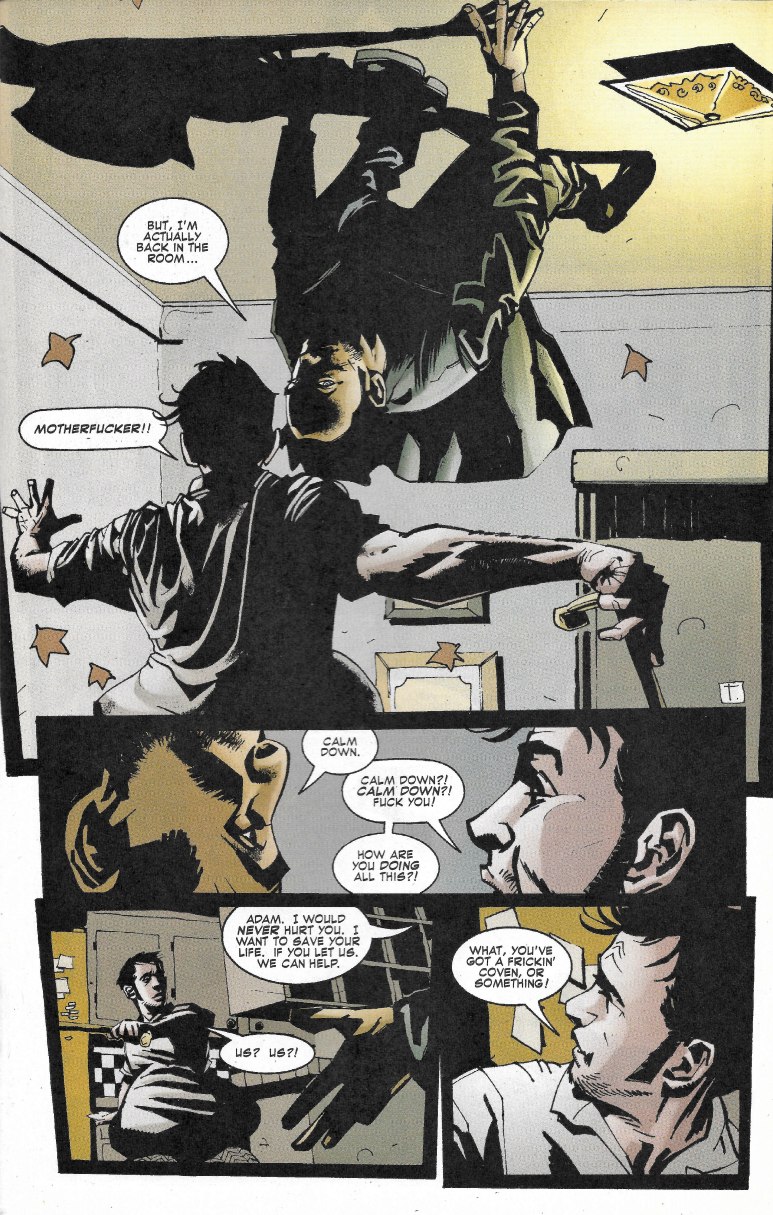 And the “us” is Nicole, Adam’s other best friend who he’s nursed a slight crush on. 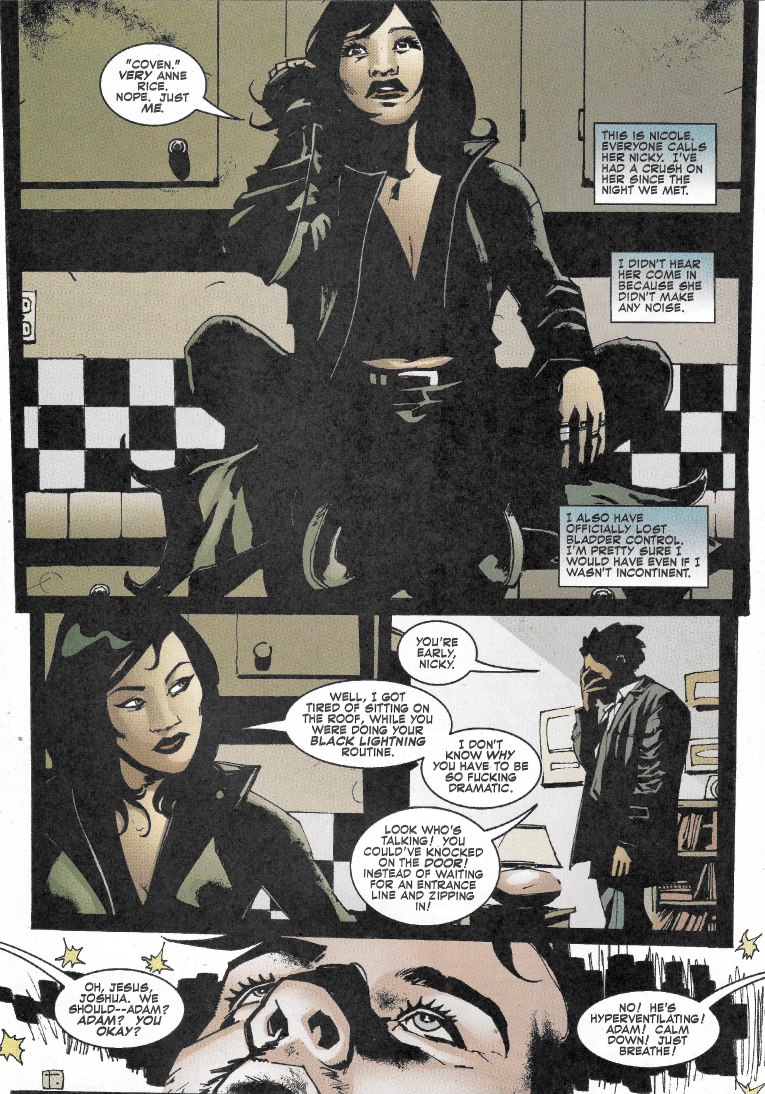 The result of all this influx of shocking news is too much and Adam faints dead away. He awakens in a nice place at least. 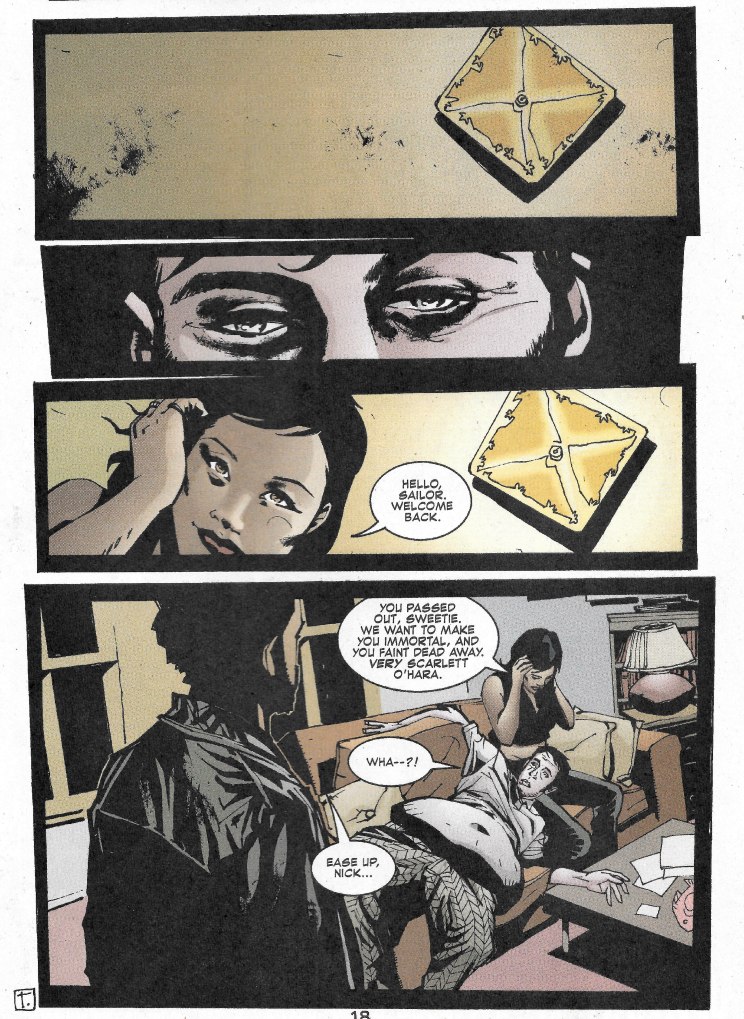 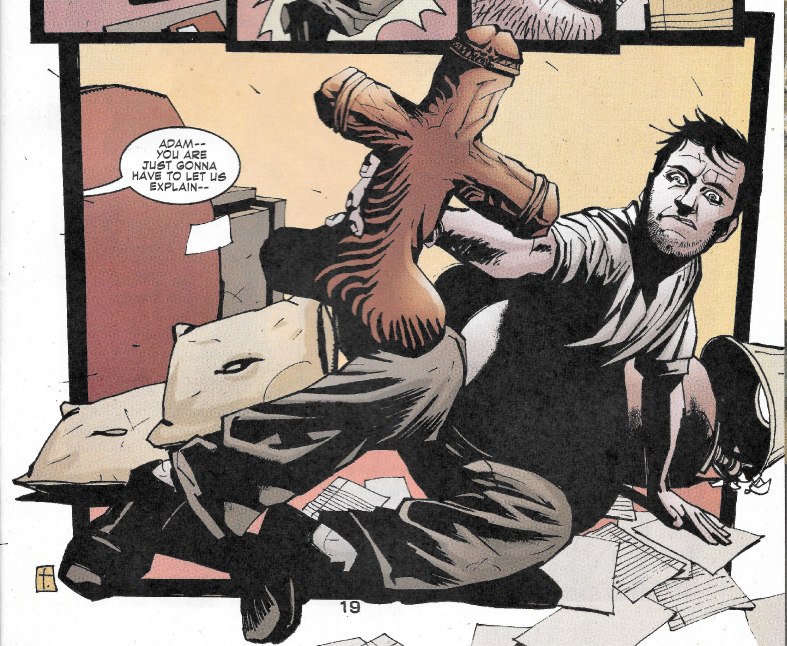 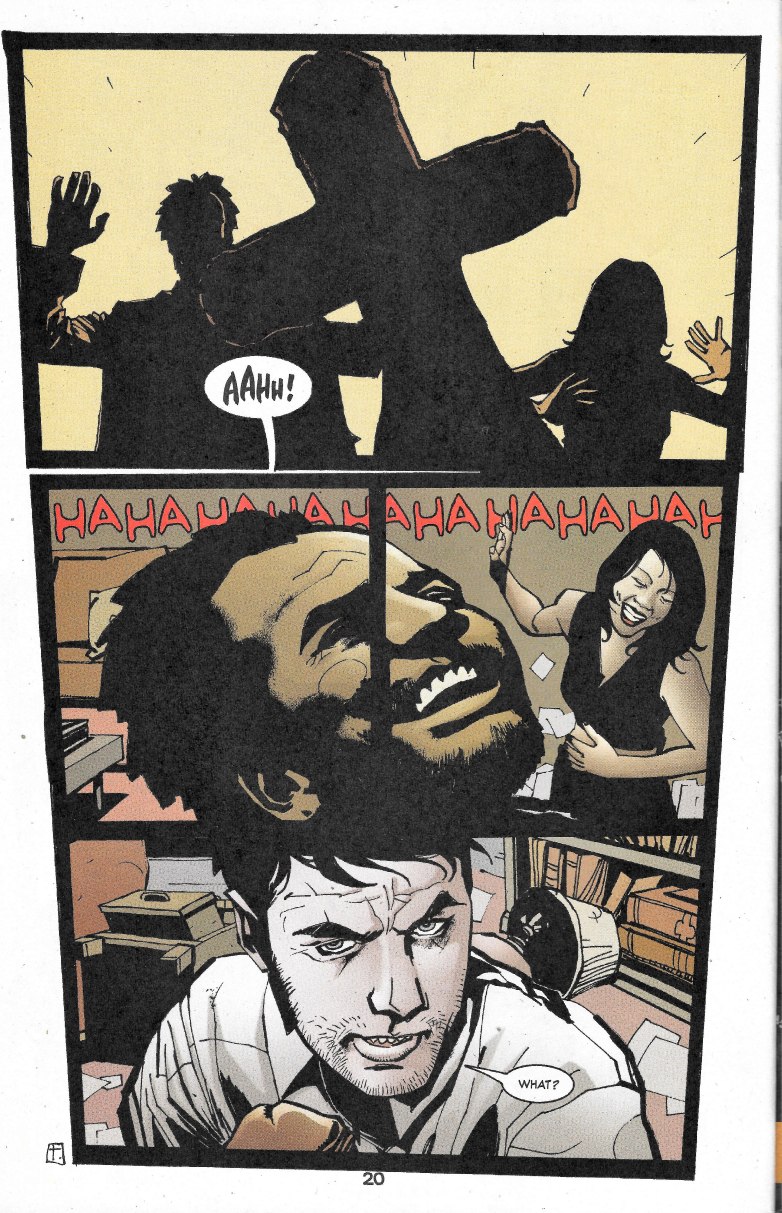 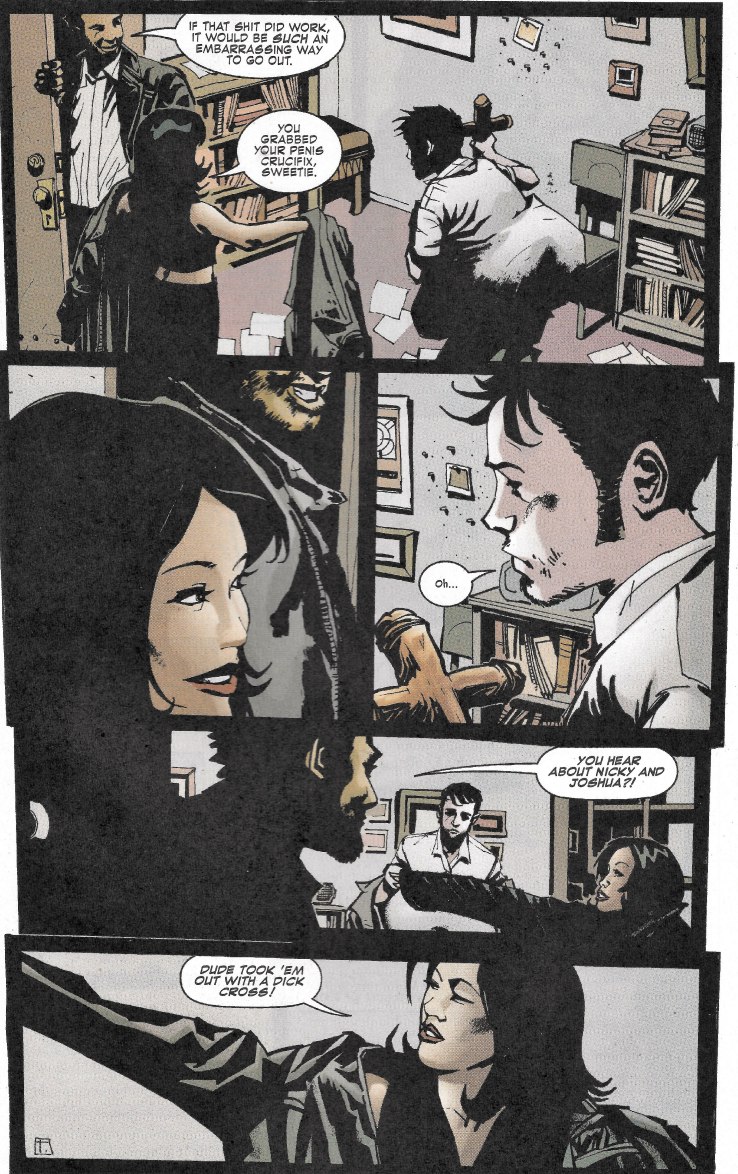 And this is where we end issue one, with Adam a little frightened and also intrigued. So are we. 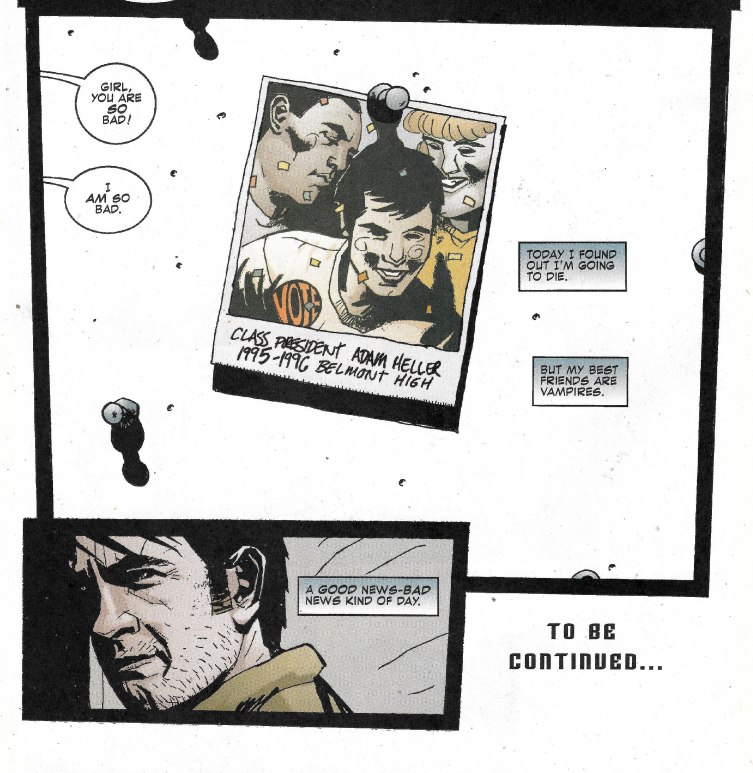 He’s had a hell of a day and his closing words wrap it up very succinctly. His peaks and troughs are so much higher than the rest of us that in other, less capable hands it might have been hard to imagine ourselves in his shoes. Thankfully, the hands that told this tale have done a great job of getting us started.

Highly recommended. I’m going diving for these at next opportunity or may have to breakdown to get the trade. This is just too good of a story start.
Posted by SonOfCthulhu at 8:10 PM