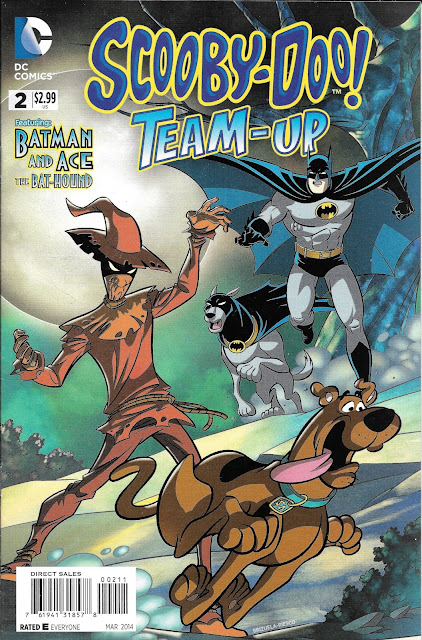 From a TV show I couldn't get into to one that I've watched so much that it might as well be part of my genetic make up.

Every Saturday. Without Fail!

I think it is near impossible for most kids these days to understand what it must have been like for us to have cartoons available to us only one day a week, for half a day at a time. Before advertisers learned to glom on with a 24 hour cycle of endlessly repeating product advertisements masquerading as children's cartoons. No one but us old folks remember.

But we remember it very well.

Everything from meticulously planning out our stratagem to maximize the "good" cartoon shows yet not waste one precious moment of TV time with empty air to the bloated feeling eating an entire box of sugar coated cereal would feel like that morning.

Scooby-Doo was a staple of that era. He was literally one of the best shows of that time period. Right up there with the Bugs Bunny and Road Runner Hour, we all watched Scooby. He was the "Masterpiece Theater" to all the goofy sitcom clutter of most mornings. I loved none of his shows more than The New Scooby-Doo Movies, the second series in the chronology. 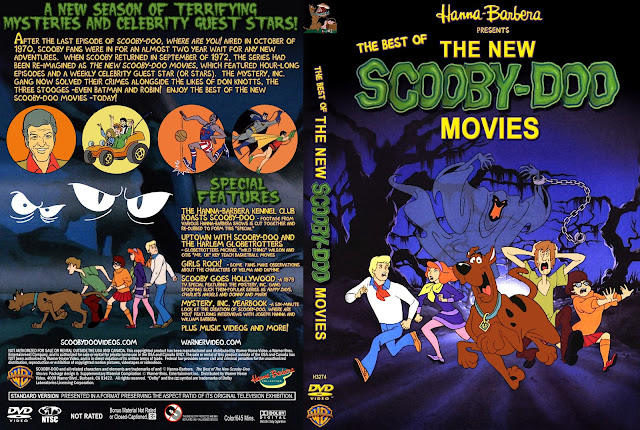 By this point the formula had been knocked off so many times you could no longer count the number of crime-solving, mystery loving teens and their adorable non-human sidekicks. However the NSDM had guest star power going for it. Everyone from actual cast members of other cartoons like Josie and the Pussycats, Batman and Robin, and Speed Buggy, to animated versions of comedy troops like Laurel and Hardy, the Three Stooges, The Addams Family, and the Harlem Globetrotters, to ACTUAL entertainers like Don Knotts, Davy Jones, Sandy Duncan, Phyllis Diller, Jonathan Winters, Tim Conway, Momma Cass, Don Adams, and Sonny and Cher.

It was an amazing time to be a kid.

Imagine the cast of The Big Bang Theory or Justin Bieber showing up in Scooby-Doo. Imagine it! Pretty wacky, right?

Well, my generation had that.

And in 2014 DC tried to capture some of that lightening in a bottle with Scooby-Doo! Team-Up. Sadly they missed out on real people as properties and tend to load up on DC's stable of superheroes. Not that I mind, but there are so many missed opportunities if you took this some other direction. Flintstones, Jetsons, Johnny Quest, Secret Squirrel, Quick-Draw McGraw, Frankenstein Jr., The Impossibles, Space Ghost, and Hong Kong Phooey make appearances, but most of the 26 issue run is all superheroes.

Take this issue, for instance: popping in at #2, this second team-up again mixes in Batman and Robin. However, they are used to a much lesser extent than expected and there are many DC cameos. The brunt of the issue goes to a surprise guest star as I'll explain in just a moment.

First though, we open with the standard Batman: The Animated Series feel of most of DC's Batman for kids line. 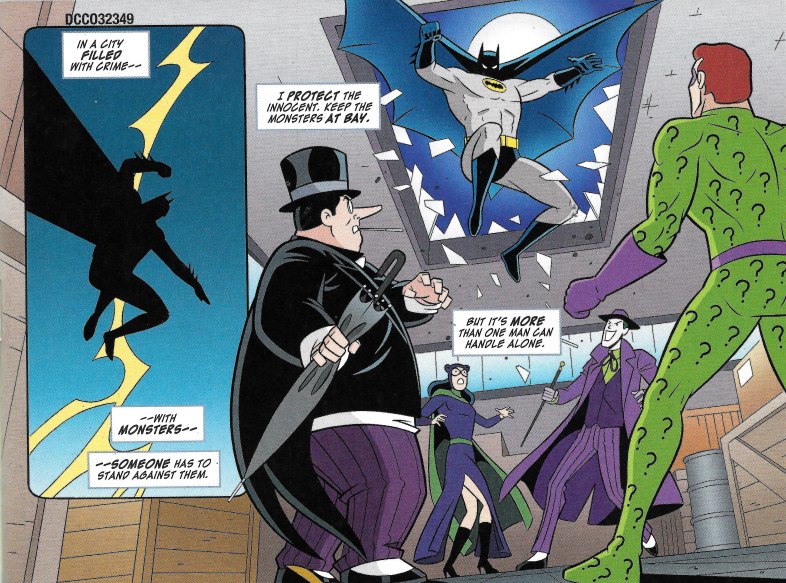 Followed swiftly by the sight that now Scooby had replaced Robin. 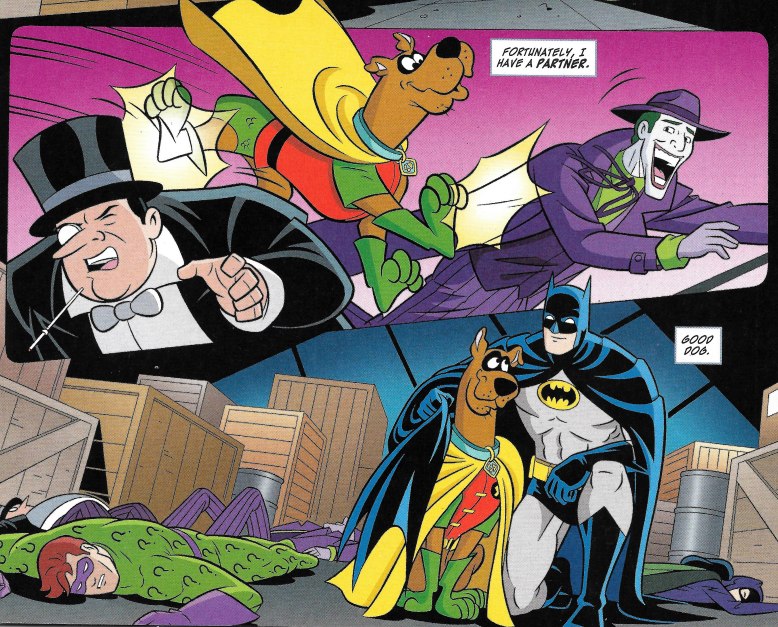 Only to further find that all of this is just a day dream our dog pal is having, while the teenagers meet with other luminaries from DC's pantheon of crime solvers at the meeting of the Mystery Analysts of Gotham City. Also there is far too high a ratio of pipe smokers-to-non pipe smokers in this crowd. Seriously, DC. 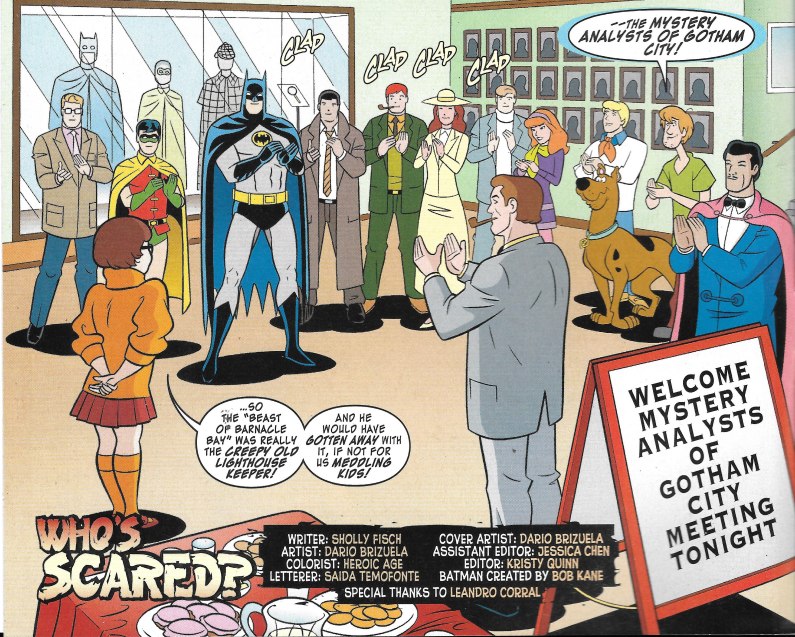 Now I can't pick out everyone in the crowd here, so I had to do some judicious googling. 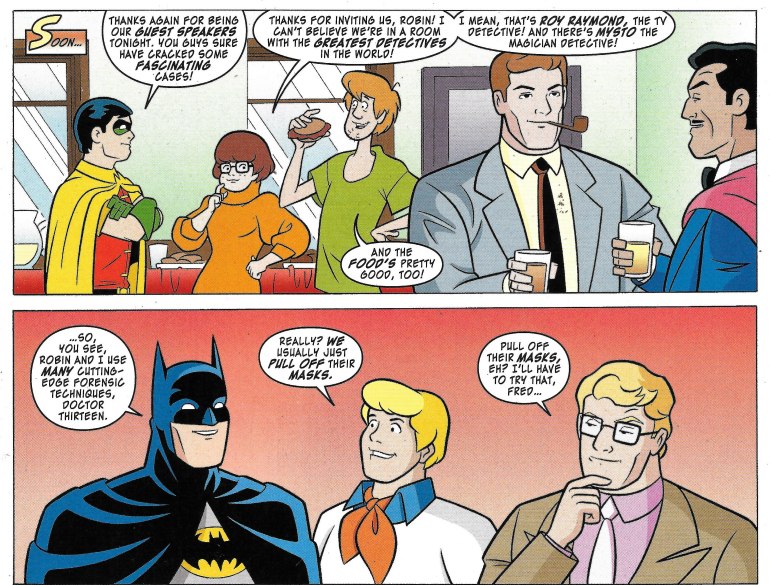 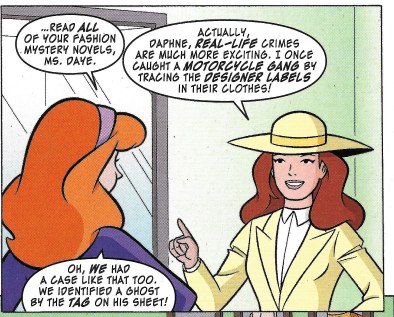 Ms. Daye here and another young man by the first name of Jason are lost on me. I mean, I am old, but not THAT old. It's neat that a book dedicated to mostly pre-teen audiences would dig back this far into comics history to find some relevance. And as for me, I enjoyed the exercise of my own detective skills to figure most of these characters out.

Our team-up story revolves someone I'm VERY familiar with. This fella right here. Who's a good boy? 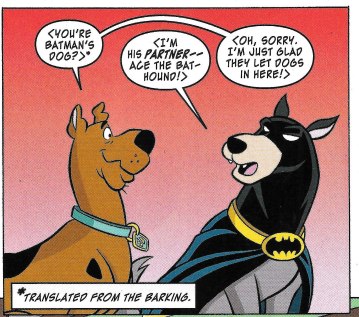 That's right, Ace the Bathound is a good boy! So while Scooby is hanging with "the 'hound" learning all about how even Detective Chimp got his name on the wall of mystery fame at the museum, trouble is brewing. 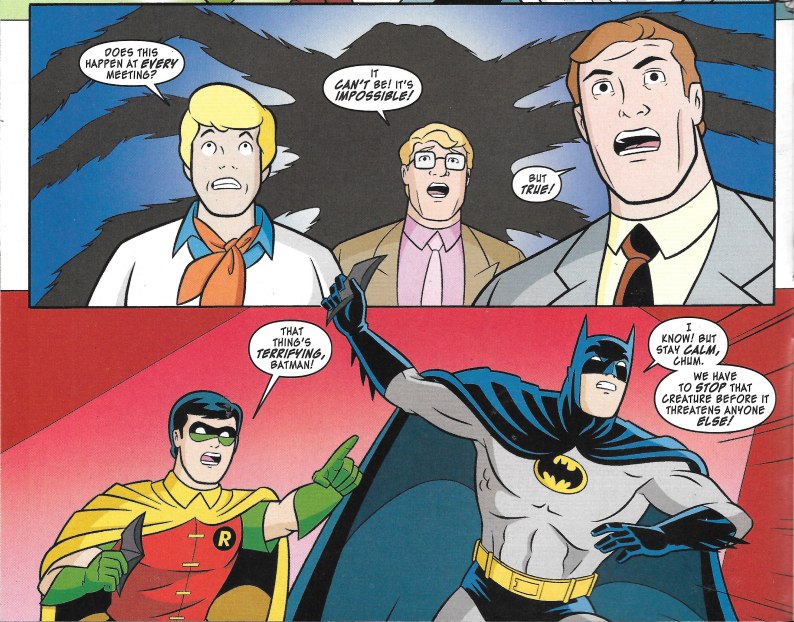 Giant spider trouble that is! With the appearance of this monster, the human mystery-fighters have their hands full. Even Batman and Robin are ineffectual in fighting it, and while most of the crowd reacts by standing up to their fears… 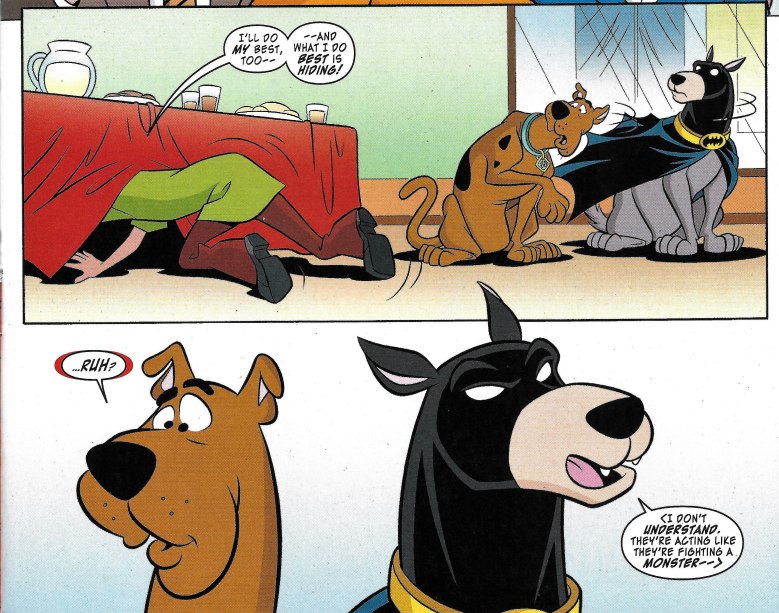 …at least one familiar face cowers under a table. However our faithful companions have no idea what is going on. It appears to them as if everyone has gone crazy and are fighting with invisible monsters.

Of course as the cover has already spoiled, the cause of all this commotion is The Scarecrow, much to Scooby's chagrin. 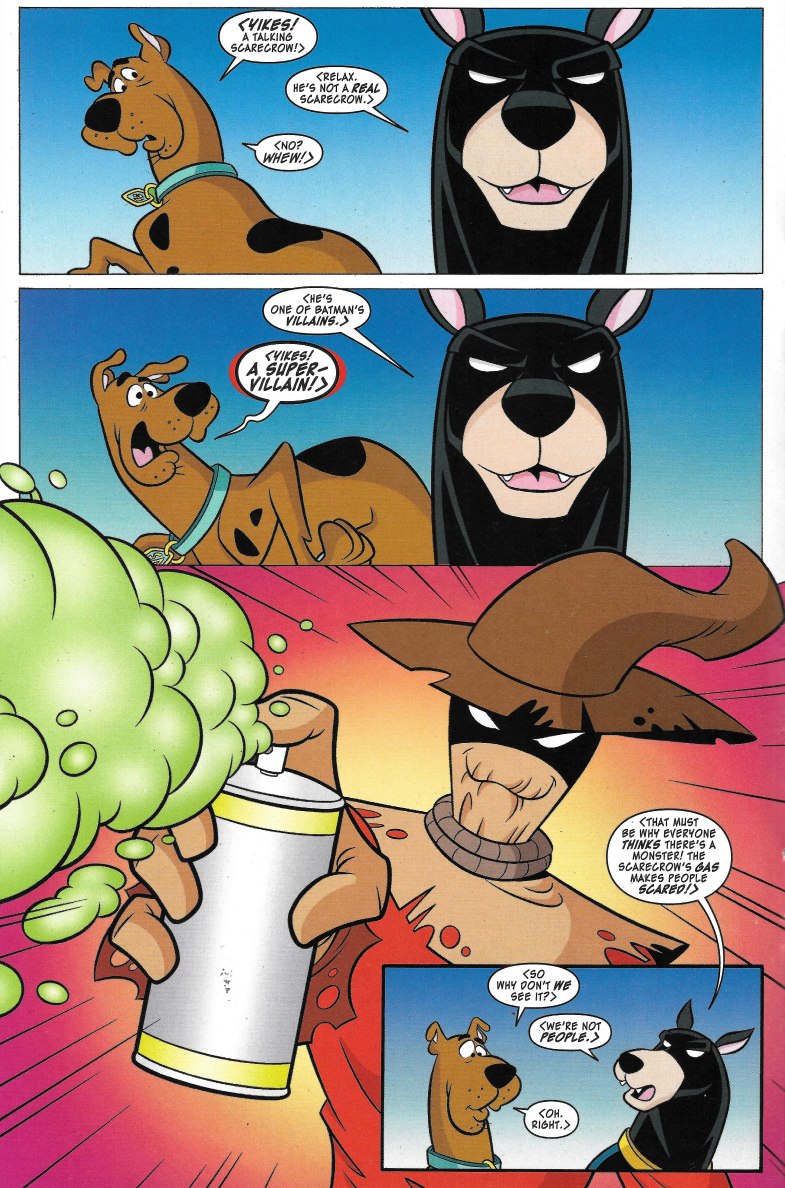 There is a neat bit about why the dogs aren't affected at the end there and then we are off to the races. The Scarecrow leaves, feeling secure in how long the crowd of sleuths will be incapacitated. Neither Batman nor Shaggy is coming out to catch the bad guys, so he might be right about that.

So instead it's up to the mutts to haul in the villain's butts. But not before Ace dresses Scooby up in a disguise. Which not only looks good here… 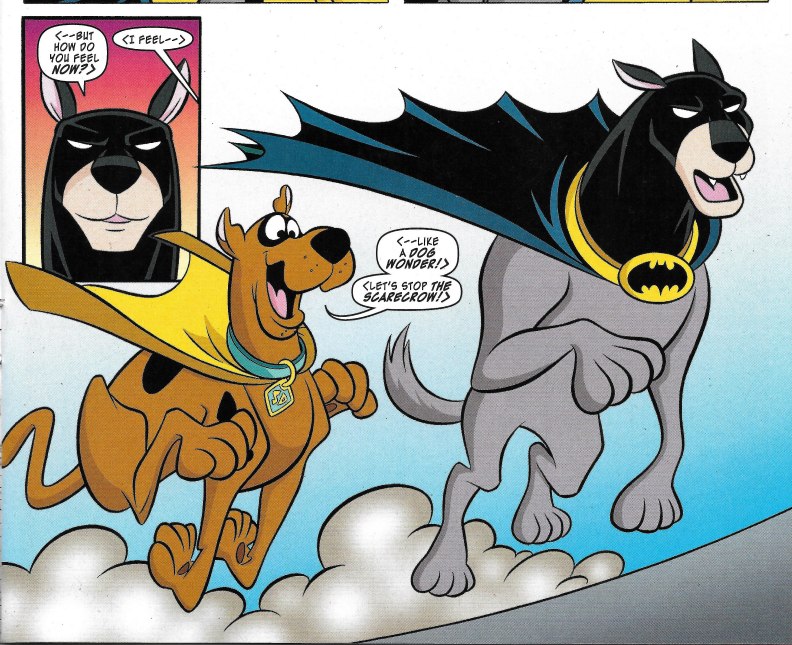 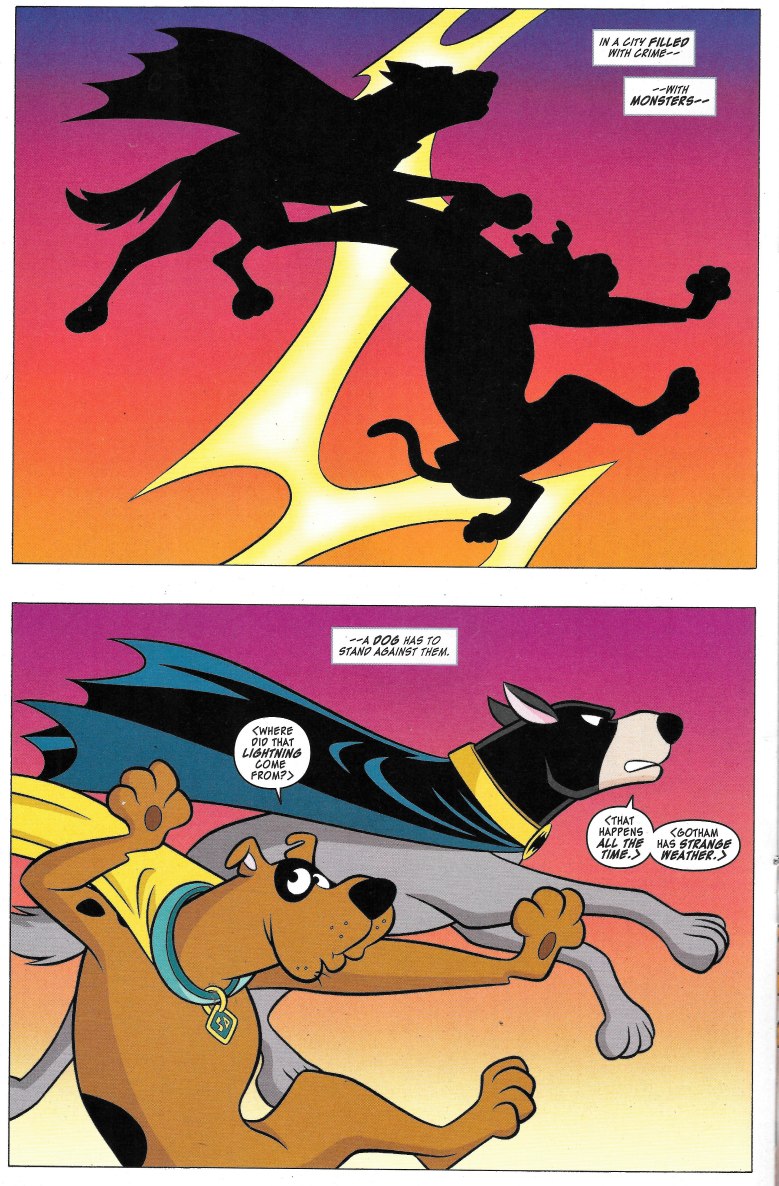 Love that the book keeps a good sense of humor about it. While the pooches are hot on the Scarecrow's trail, the heroes make a startling discovery. 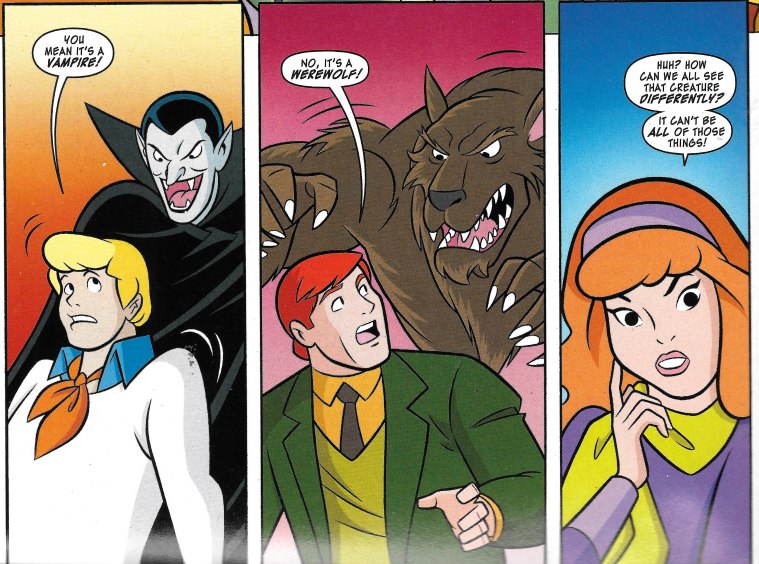 And with the discovery that they are all seeing different things, Batman develops a solution to all their fear-gas related problems 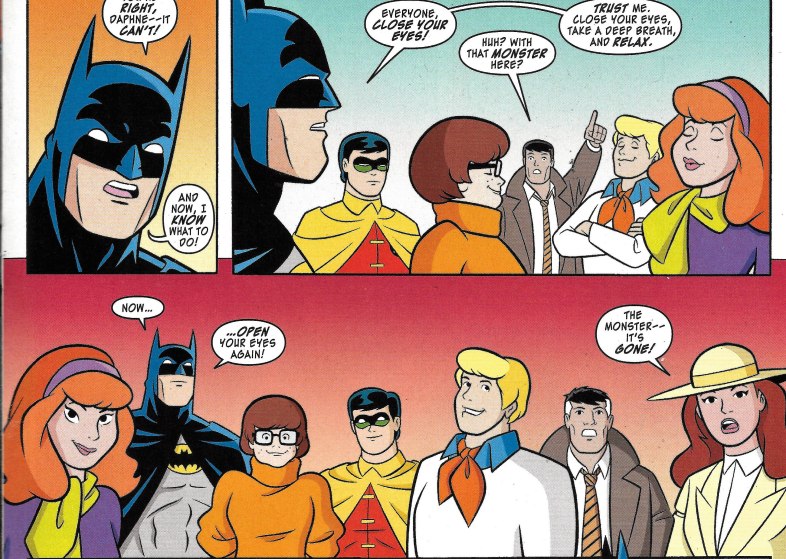 With the monster visions taken care of, our group of mystery hunters gets to work on where Ace and Scooby are, arriving at the correct conclusion in record time. They are off like a shot to help the canines catch the Scarecrow. 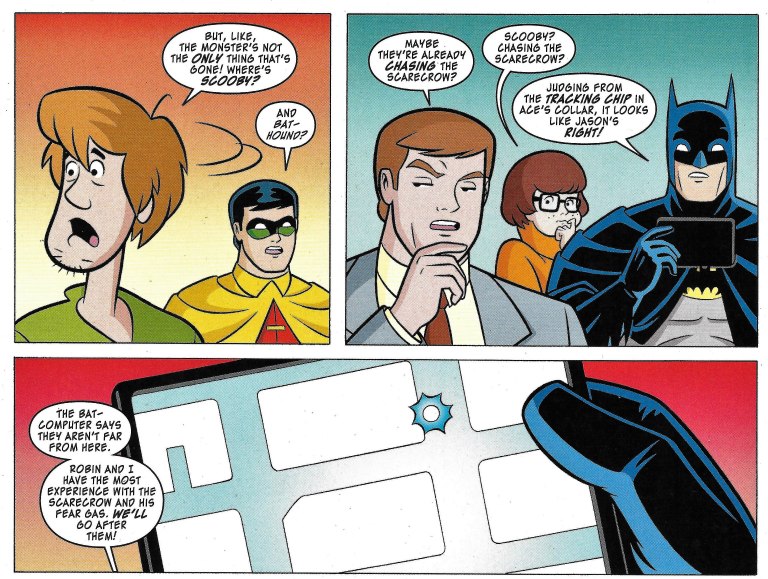 But doggonit if those pets haven't already found the Scarecrow and are attempting to foil his schemes. Scooby a little more carefully than required… 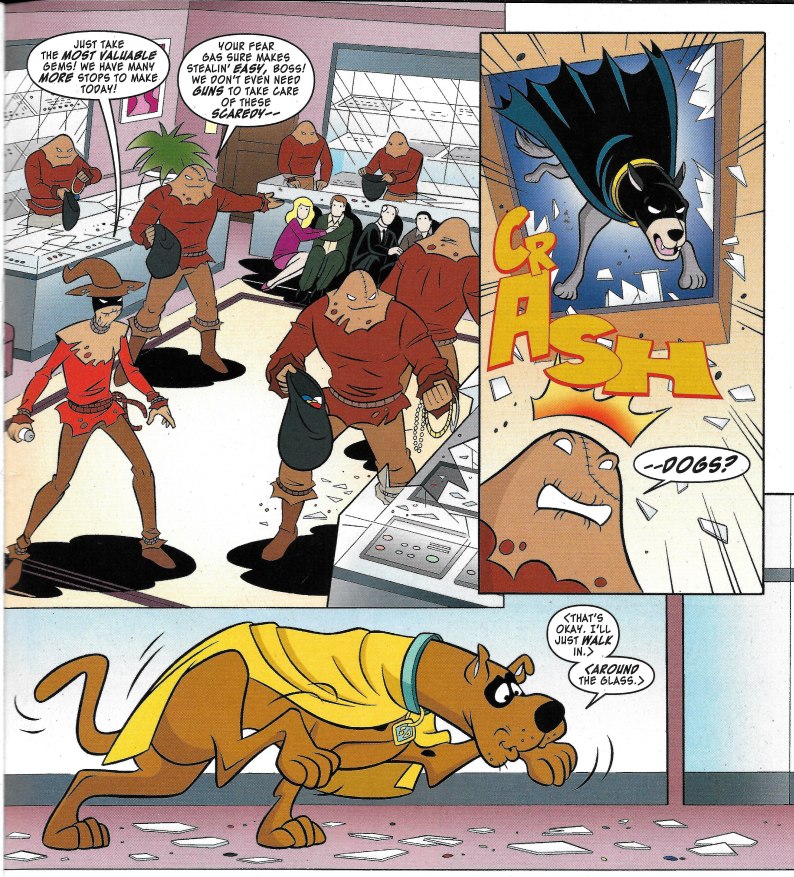 …and when the Scarecrow surprises Scoobs, he beats feet out of there….and right through two of his minions legs, knocking them off their feet. 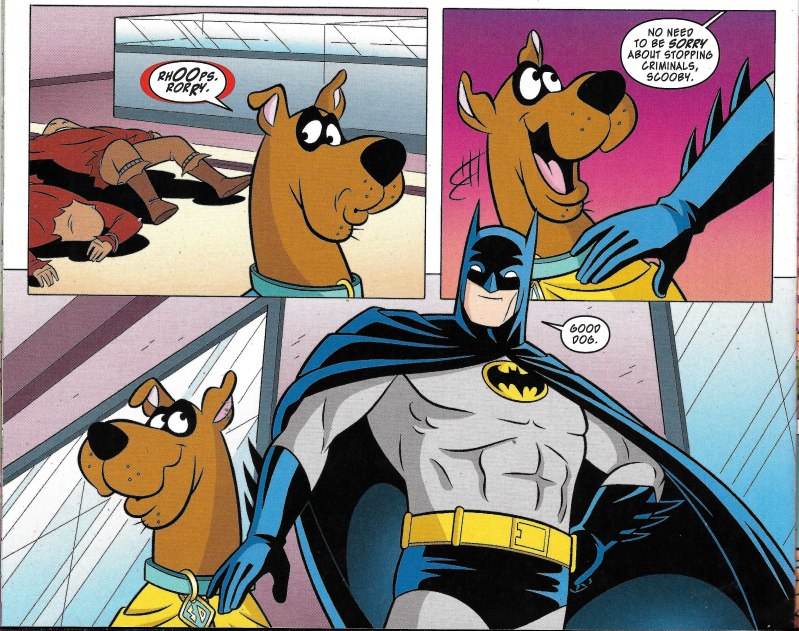 With that earned praise, Scooby-Doo is brave enough to help wrangle up the leader of these criminals… 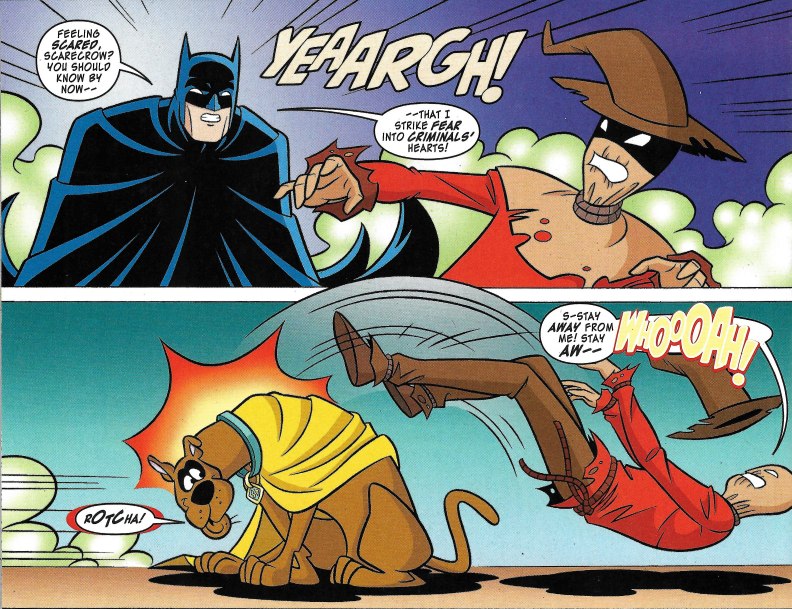 …with a little help, of course. 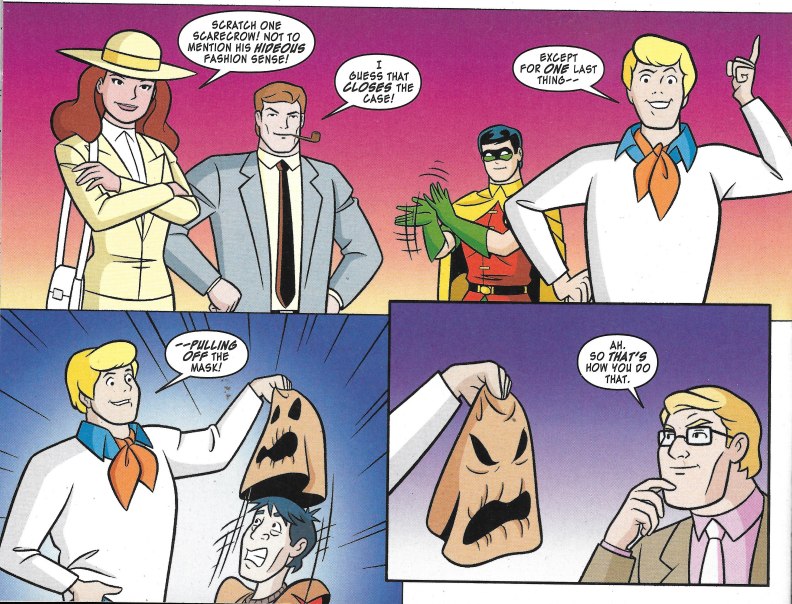 Giving Fred an opportunity to "do his thing." Geeze Fred! Way to steal the limelight.

That's short-lived however, as Scooby and Ace are made permanent members of the mystery society's wall of fame. 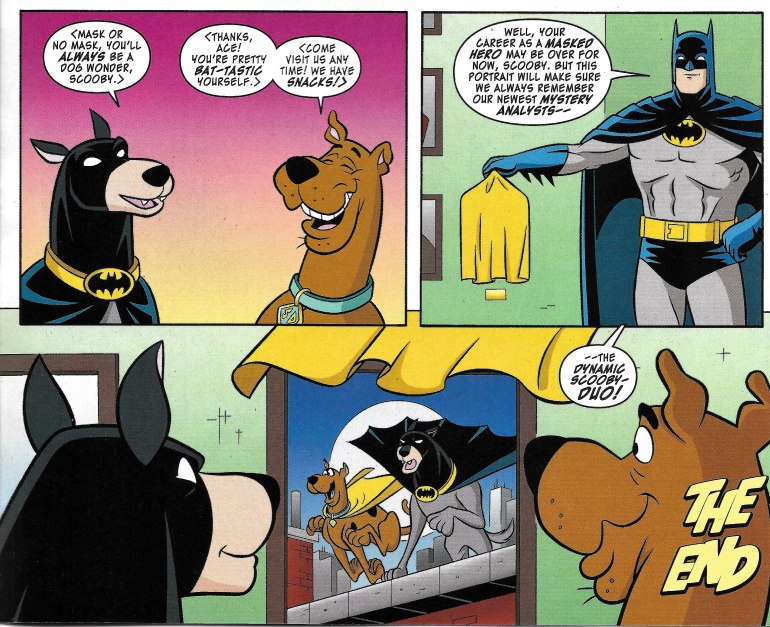 It's a cute issue. Enjoyable, kid friendly, full of fun for DC Golden Age trivia buffs and not too many in jokes to where it would descend into parody. I liked it quite a bit. If I see any more, I'd pick them up, although I still lament the absence of a Tim Conway, Don Knotts, or Sonny and Cher issue.

Because those New Scooby-Doo Mysteries were the best. And now that I'm done reading this, I have to put away my cereal bowl and spoon.
Posted by SonOfCthulhu at 2:29 AM