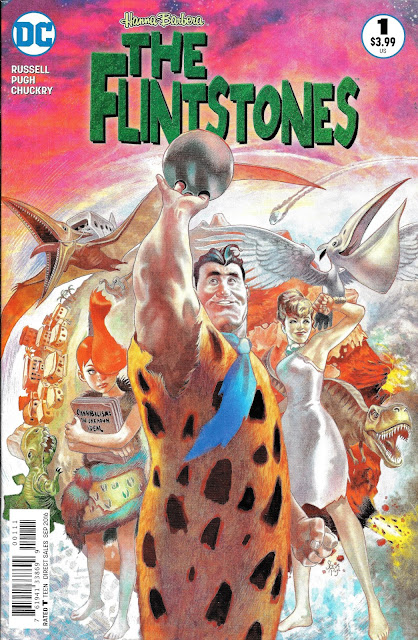 
Another staple of my childhood, The Flintstones were created as a cartoon riff off The Honeymooners. Their primary draw was the imaginative environment created by seeing the modern world through the lens of a primitive, caveman-based toolbox.


It was mostly window-dressing and character voices, is what I'm saying. There wasn't anything to these plots that made them specific to the prehistoric environs. It was standard sitcom storylines with caveman paint. And they weren't even good sitcom stories.


But they were better than this mess crapped out by DC late last year.


Somehow DC got ahold of the print rights to a whole mess of the Hanna-Barbera stable and decided to go a little crazy with them. Under the umbrella that there are no bad ideas, they updated, changed, tweaked and/or revamped the Wacky Racers, Scooby-Doo, Johnny Quest, and the Flintstones.


Part of Hanna-Barbera Beyond, this version of the Flintstones bears little to nothing in common with whatever fond memories you might have about Fred, Wilma and Dino. Instead you get left with an unfunny mess that is more insulting than it is entertaining.


While other parts of H-BB show promise, this version of everyone's favorite modern stone-age family disappoints. And disappoints all the harder once you realize that the writer of this mess is the same Mark Russell that did such excellent work on Prez.


We begin the issue with a present-day wrapper tale of a Neanderthal found frozen in a block of ice being discussed by two museum workers. 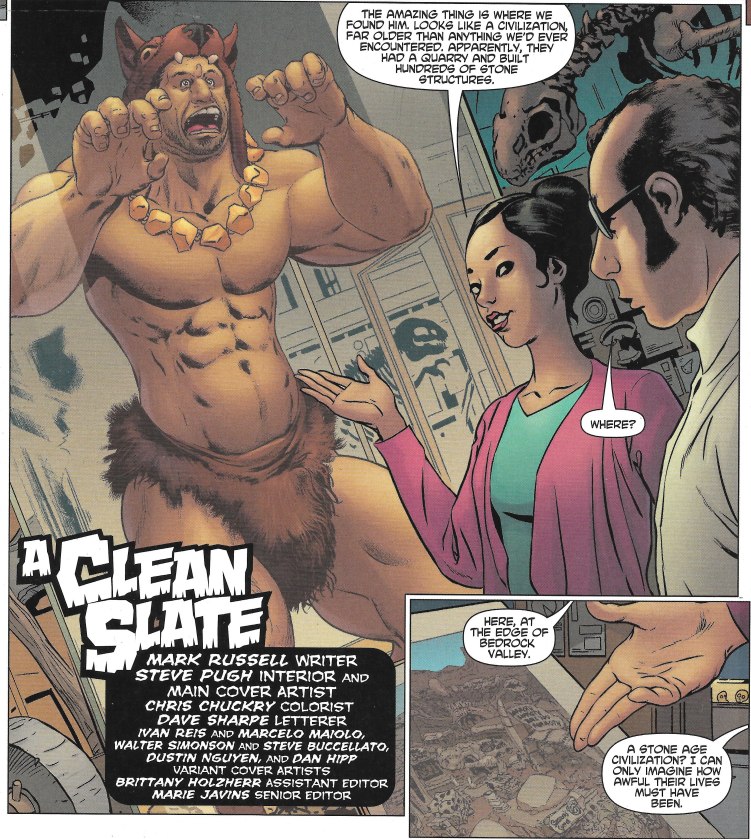 Since he was found frozen in the area of Bedrock, our assumption is that this must be what happens to Fred (or perhaps Barney). We aren't given any more information but instead are thrust back into the past of the Flintstones only drawn in a more realistic manner.


And "grittier". Which means that the cavemen of the Flintstone era no longer exist in the vacuum of historical cultures that they once did, but are now an aberration in the advancement of civilization, but wholly in OUR timestream. Thus, Fred is asked to entertain three of Mr Slate's new "guest workers" from another tribe. 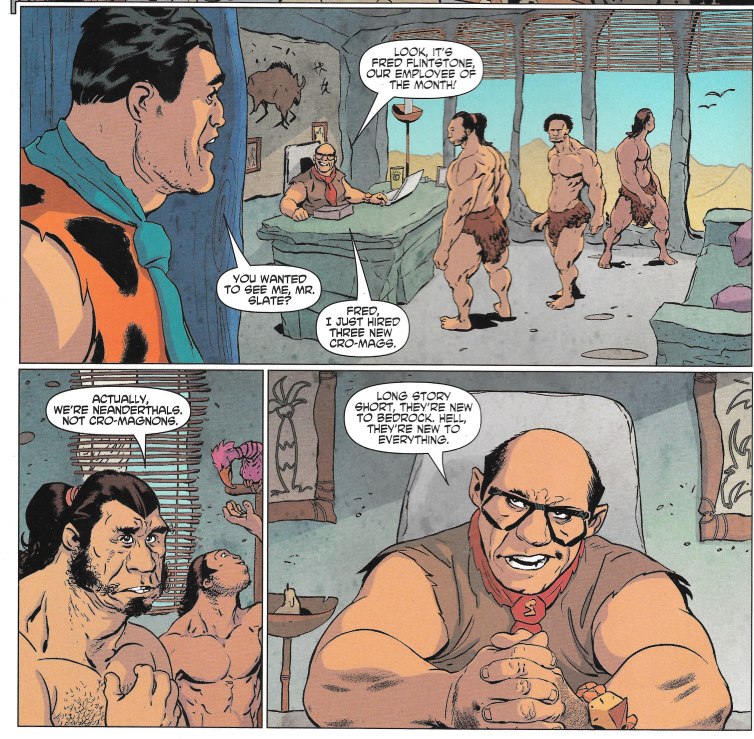 Before some Trump supporters can jump in here with "they took our jobs!" I want to mention that the inhabitants of Bedrock seem woefully small. The idea that Slate is the big-wig here exists because he makes the stones used for their houses. And used as their currency. And every other thing for that matter.


He is also pretty much the same jerk he was in the cartoon only amplified to a higher degree. Note how he treats these new hires, speaking about them like they aren't even present in the room. 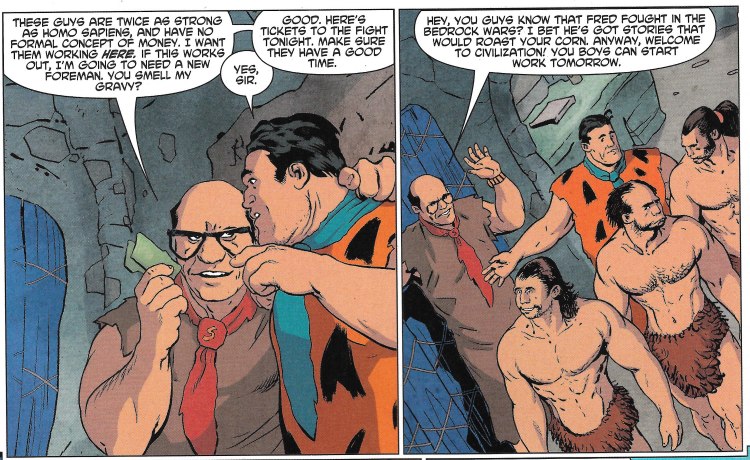 It's this more than any other thing that bugs me about Russell's Flintstones: there's no mirth here. The characters all seem to live these depressing lives and they never have any "fun".


Take Fred for example. Even in the cartoon his character would express exuberance and elation over simple pleasures. He loved bowling and going to lodge and cooking up crazy schemes that never panned out. Fred LIVED in the cartoon.


Here he is a burned out tired shadow of himself. Note how "excited" he is to have an opportunity to become Foreman if this works out.


Also Fred has been changed into a veteran of something called the "Bedrock Wars," more on them in just a bit. 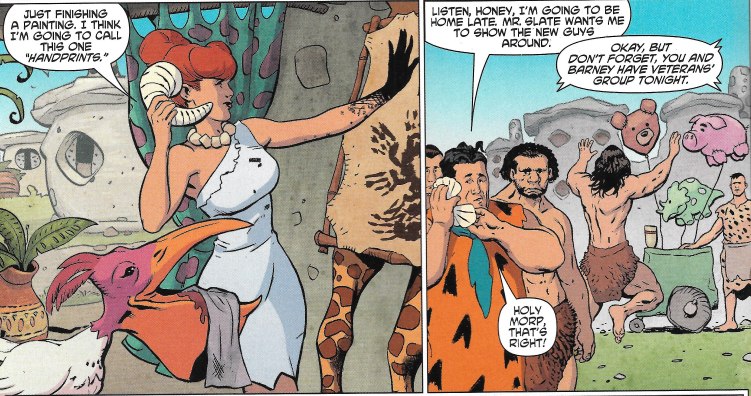 Wilma gets little better treatment. She is excited about her painting career taking off, which serves to give us one of the few good moments in the book AFTER it crushes the soul out of her. Note that "Bedrock Wars" thing isn't going away for a bit. Now we have Fred having to take Barney to a meeting because they are suffering from PTSD symptoms.

Barney isn't his usual "Yuk-yuk-yuking" self, something the series really needs. OH! And This is what passes for a big laugh in the book. 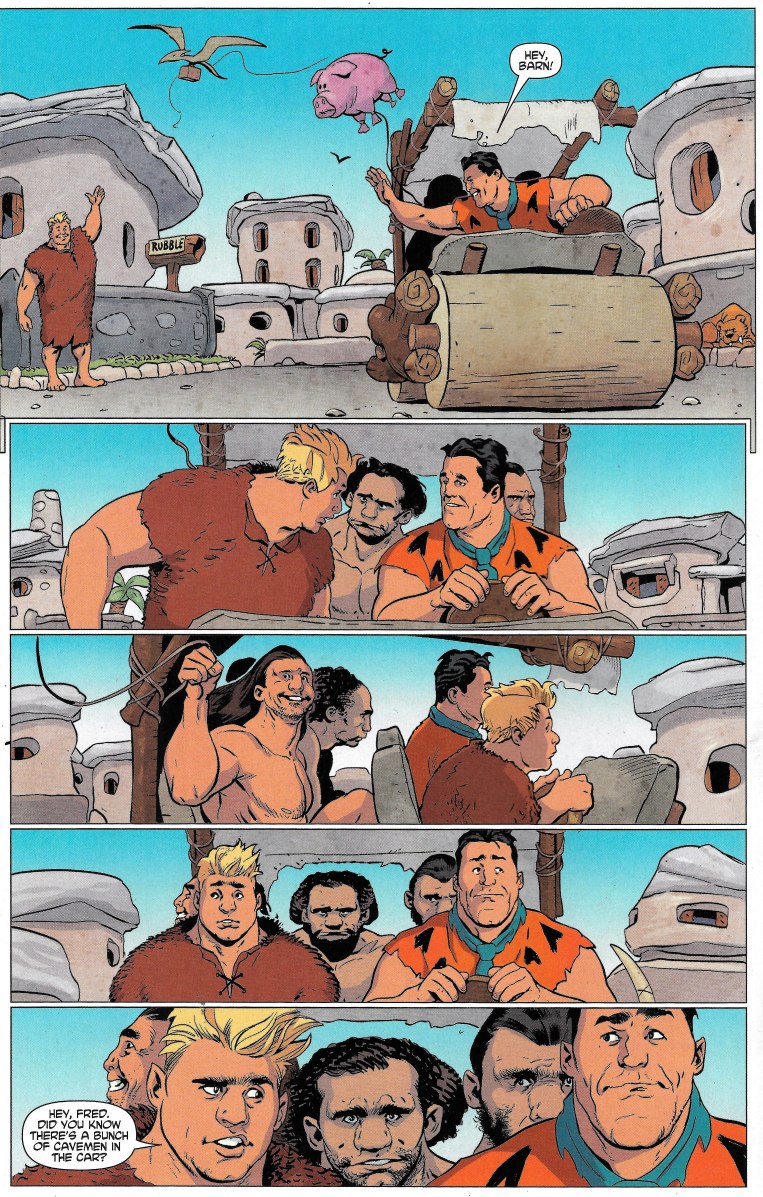 I smiled but seriously that needs some work.


Next thing we know, we are down the rabbit hole with Fred's veteran's group and it seems surreal to watch our childhood entertainment be turned into damaged shells of what they once were. YOU should be SORRY!


Fun, guys! The Flintstones were supposed to be fun. I don't care if it is a gritty realistic take on them, make it ENJOYABLE TO READ! Turning every single moment of their lives into a new reason to be depressed is horribly dark. And not dark in an edgy way. It's dark in a "why am I reading this crap" way.


That scene depressed me so much, I didn't even enjoy the jokes from the Outback Snakehouse scene setup two pages later. 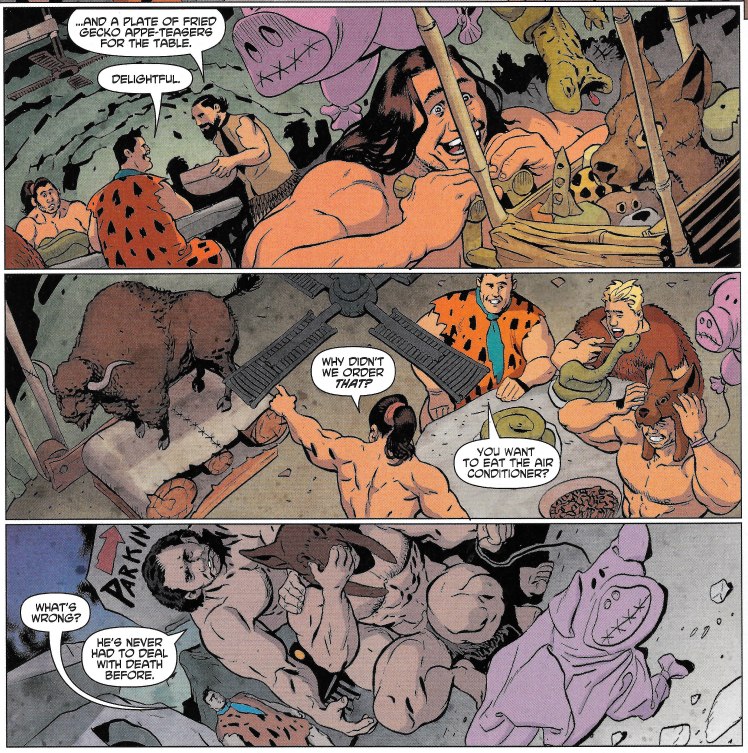 The air conditioner line almost got a laugh. Or at least it would have if I hadn't been so saddened by what Fred's life has become. It's like checking in on a good friend years later to find they've become an alcoholic shut-in and are hovering near death.


When Fred checks in for the night, Wilma is ecstatic about her painting. Also they received an invite to Slate's hot tub party, which illicits the weakest "yabba-dabba-doo" ever out of Fred. And the next morn, Slate admonishes Fred to live up to his Employee of the Month title and get the new hires to say they'll stay.


But Fred is such a sad sack in all this. Who would want to remain in "civilization" when it turns a person into this: 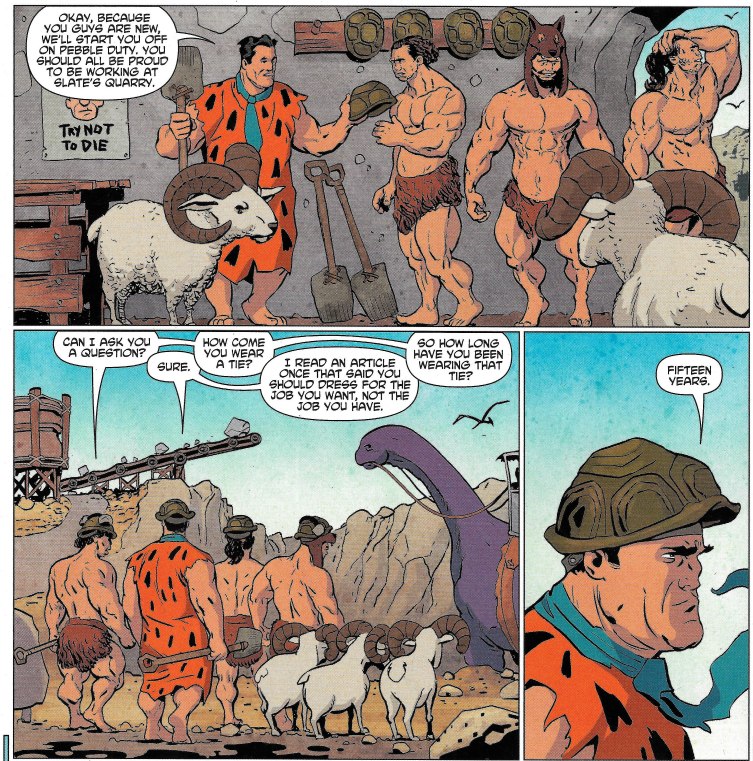 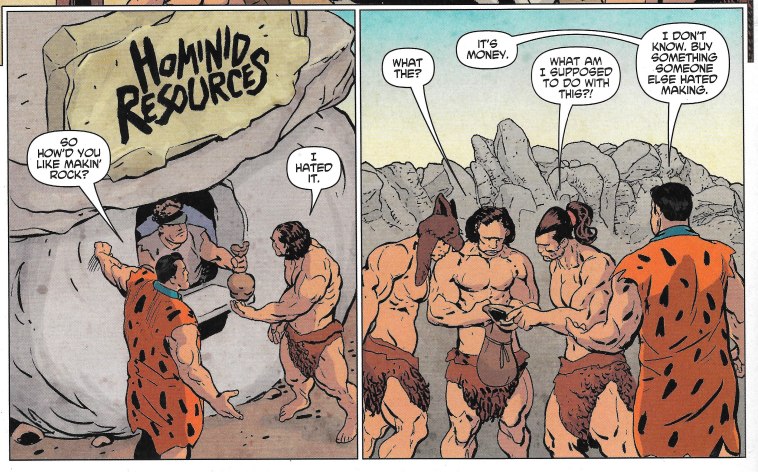 NO! Wow, this book shows Fred as being more emo than an 90's teenager. Who in their right mind thinks this is funny?


Maybe I shouldn't be too hard on Fred though. As Wilma gets a letter telling her that her paintings will be on display in a gallery show, we move on to the evening at the boss's house. Given that this is the dickhead that Fred works for… 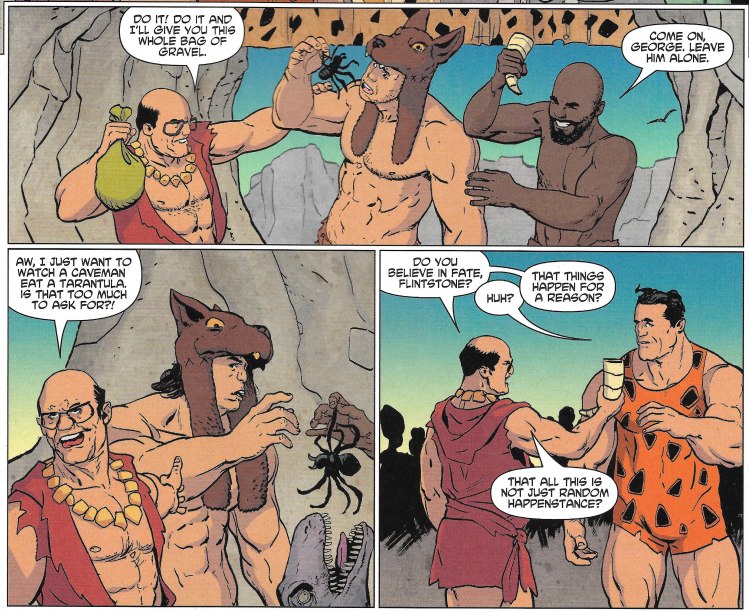 …not about the Fate thing, but about the treating people like they are only alive for his amusement thing. Oh, and this bit here, too… 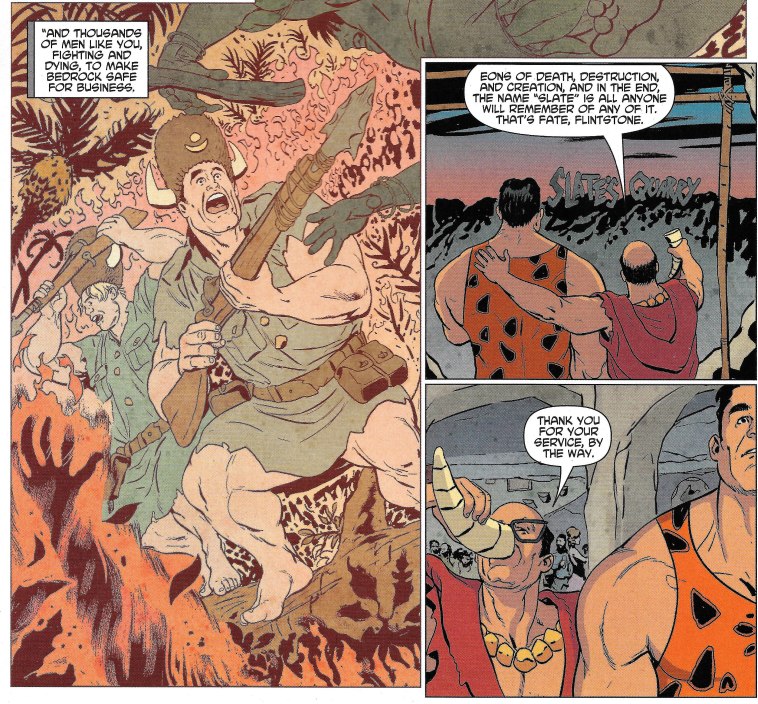 …where he points out that all of Fred's sacrifices doing military service during the war will not matter to the generations to come, yet his own name and legacy will endure. This book could not get more depressing if it tried.


And the sad part is there are some bits that MIGHT have worked. Like this one about Slate having discovered this new dessert he wants everyone to try called ice cream. 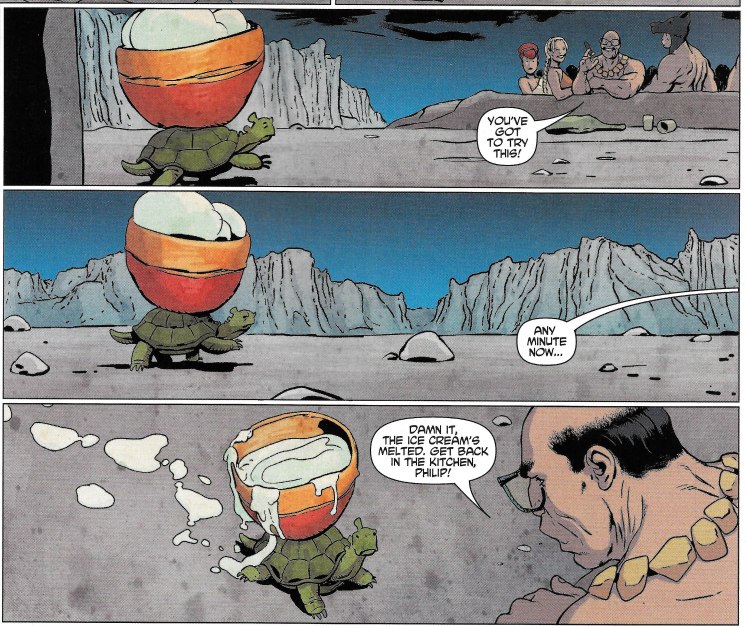 It might have worked in the background of some other ongoing narrative. But placed out here on its own there is a "sore thumb" affect going on. In the entire time the turtle is walking to the hot tub, it appears no one spoke and every eye was trained on it. I found myself asking why would a group of people do this? Why not just go get the freaking bowl? The joke would work if we continued on with the conversation and the turtle's approach was shown to the side. Instead it just falls flat.


I don't know what happened to Mark Russell. His Prez is STILL one of the best political satires in comic form that I've ever read. EVERY issue I find in a discount bin I pull and all of them are worthy of reviewing here given our current "road to hell" political climate. Yet his Flintstones leaves me cold.


Almost as cold as this Neanderthal… 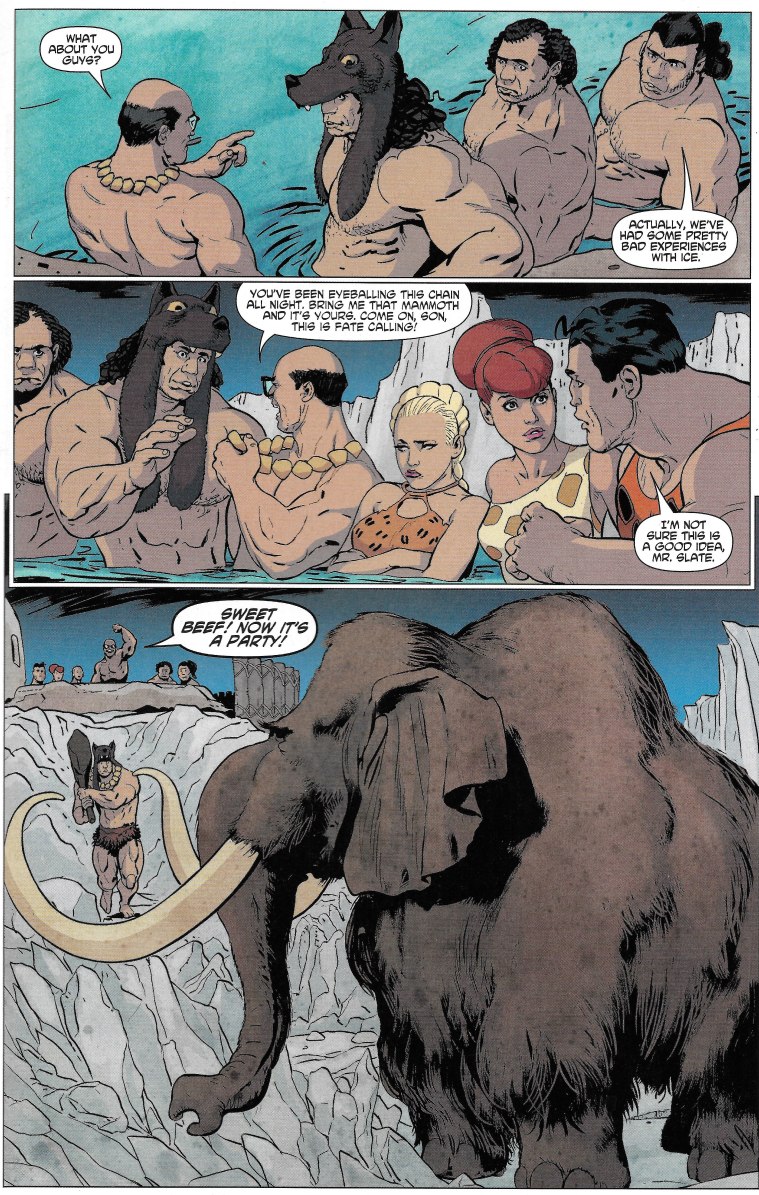 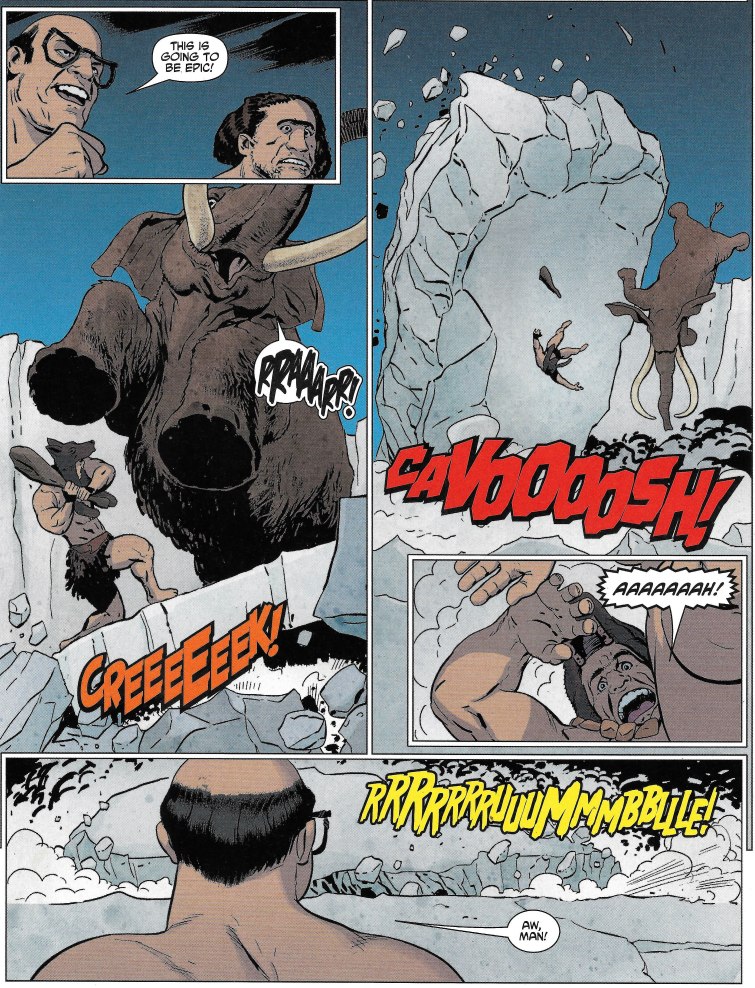 In hindsight, if this was Fred it would have been a merciful end for him. Instead he's still subjected to the rest of this story.


Slate shows a tiny bit of remorse and then the party breaks up. He apologizes when everyone leaves. But the Neanderthals have had enough of him and his "civilization." 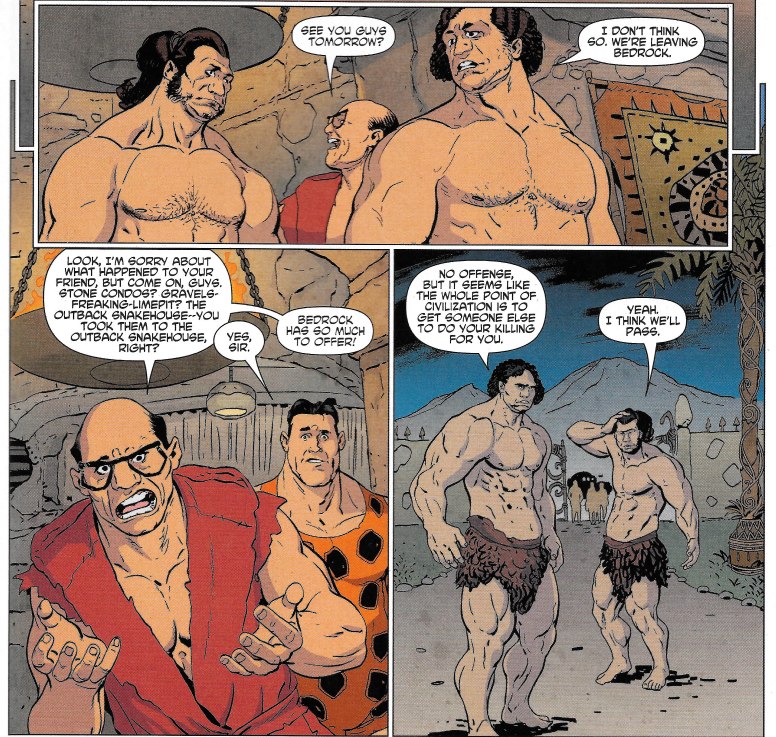 Who could blame them? I've had enough of it too. Yet there is still more pages to this and *gasp* more issues of this comic. Yes, it has lasted to issue number nine. Too my knowledge it is still an ongoing. Ugh!


The final pages in this issue concern Wilma's art exhibition, which has her art placed physically outside of the art museum on the way to the outhouses. And the snobs don't find her work appealing in the least. 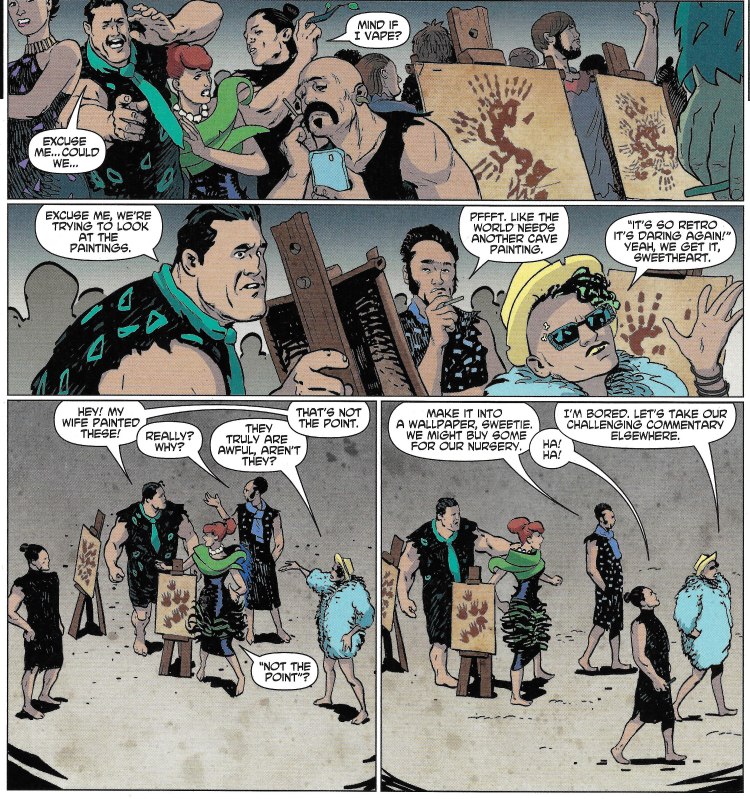 Near tears, Wilma pours out her soul to Fred. She tells him that her handprint art is symbolic of when her tribe would migrate back to the caves each year and they would stain the rocks with their handprints. To her, each painting meant "home." We get one uplifting scene here. I just wish this same upbeat tone could have permeated the entire book. 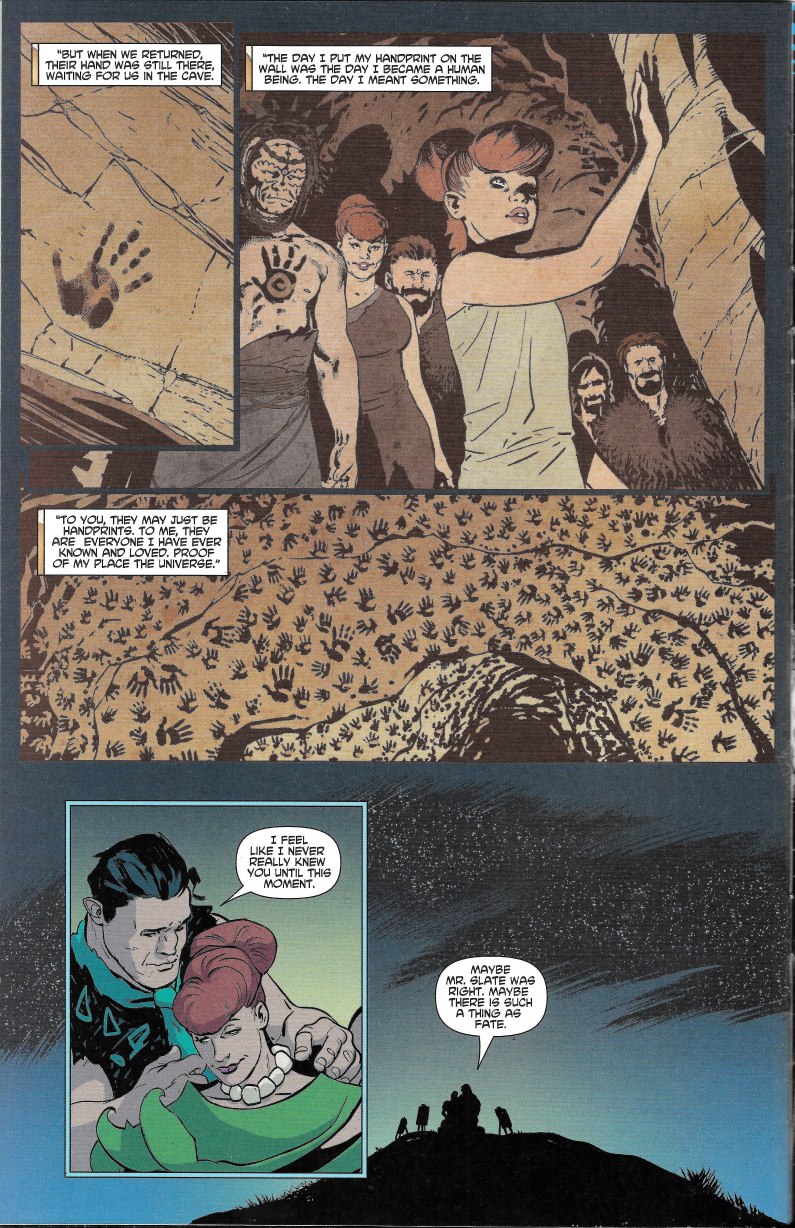 It is far too late though. We close on the wrapper, with the Neanderthal who went after the mammoth and has been trapped in the ice for millennia on display at the museum. He is assumed to be Slate, given his hat and gold chain. 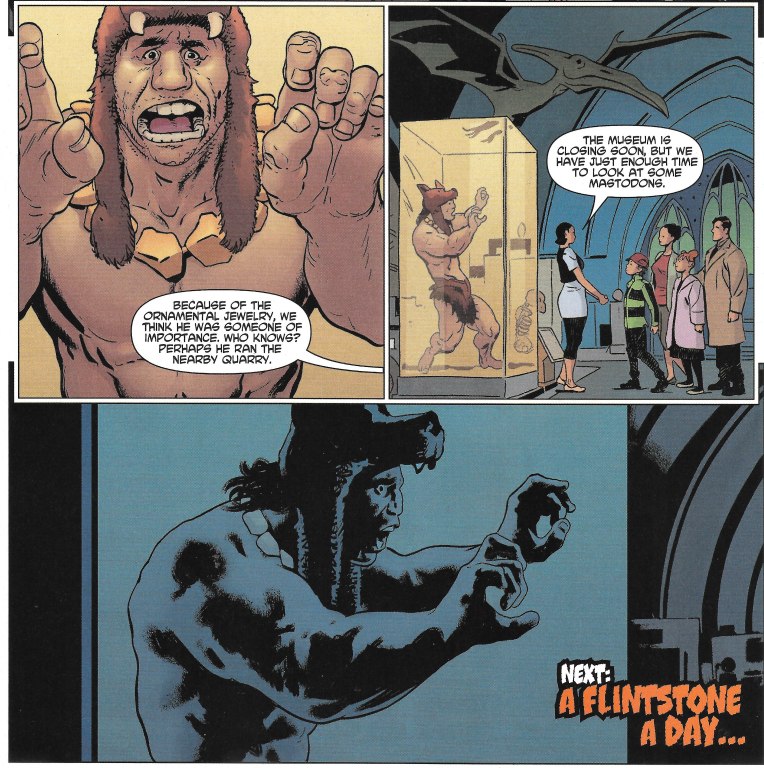 I guess that's a joke of some kind. *shrug*


Don't come near these unless you want to be depressed. I've rarely encountered a series of books that seem geared to an emo crowd than these. Available now at a store near you however. Up to issue 9 and counting.


And Prez only got six. Go figure.


Makes you wonder if when DC redoes the Jetsons if they will end up featuring drone strikes, big brother privacy invasions, and environmental devastation.
Posted by SonOfCthulhu at 3:07 AM