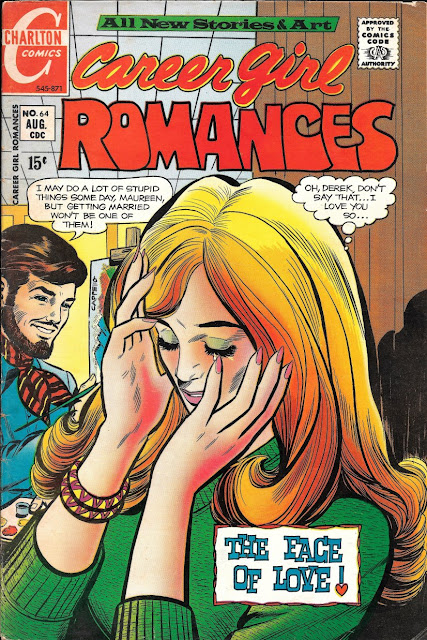 I'm digging way back into the past for this little number. Career Girl Romance began publication a few years before I was born, owning a start date sometime in the middle 1960's. Charlton had a wide range of these titles, most of which survived until around 1973. 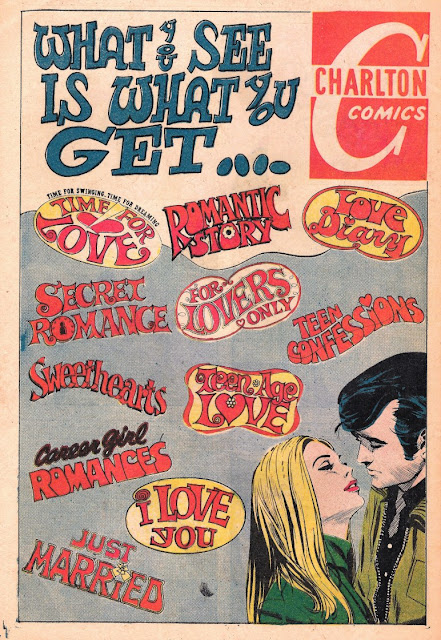 As a comic book company, Charlton was known for paying the lowest rates for new content from writers and artists. They made it a practice of often using unpublished material acquired from defunct companies to supplement new material. I owned a few of their books from the late 70's and they all had a pulpy feel to the paper and a less polished look to the printing.

I enjoyed those Haunted Things and Captain Atom books almost as much as my Marvel and DC stuff, though. The cheapness of the production didn't detract from the stories.

As for the stories presented in this anthology, I have to admit to a degree of begrudging admiration. See, I write too, mostly short stories and whatnot. Once I got the idea into my head to try churning out a romance/erotica novel. Notice the word "tried." I received a rude awakening.

Like most things, what looks deceptively easy when reading becomes impossibly harder when writing. Sex stuff is easy to write, or at least easy for me to write. But romance stories, TRUE romance stories, are a much harder animal to capture.

Romance stories follow a pattern, the adherence to which presented a huge challenge for me. I conferred with several real-life romance authors when I made my attempt and they clued me in on a few details that a romance story has to abide by.

First off, the male love interest has to be introduced in the first chapter. You can't have them show up later as the audience will get bored. When I was told this, my mind conjured up a bored housewife literally throwing the book in the trash if this didn't happen, and that might actually be the case.

Rule two is that both man and woman have to be unattached and virginal. The love between the two has to be pure and that can't happen if it is stained from the beginning by either of them having to hide from a husband or wife. Oh, but a dead husband or wife is okay.

Rule three is that for the entirety of the story, the love the two of them have for each other must in some way be denied. Maybe she is damaged by past crushes and can't love again. Maybe he is the son of a warring tribe's cruel leader and she is the only daughter of the king. Maybe she is a simple pauper and he is landed nobleman. Whatever the case, they can tease…they can taunt…but no hooking up.

And of course rule four being that they always get together in the end and it is true love and fireworks go off in both figurative and sexual fashion.

And there are other, more minor rules too. Like if there IS another love interest that love interest has to be more platonic than anything else. No hooking up for our virginal central female character. Her virtue has to remain untarnished. And many, many more intricate little things that tripped me up

Imagine being a writer and allowed to do anything in the world with your story. Go any direction you want. The freedom that gives you. Kill off everyone. Have the character go through a dark, selfish phase that alienates the reader, yet still intrigues them with a promise of redemption. Decide that your protagonist wants to spend their life alone rather than tie themselves to another's struggles. Literally anything you want can happen.

Now take all that away and force yourself to write within the "cookie-cutter" confines the template I've laid out above and see if you detect a hint of how frustrating that could become. I truly didn't give the writers of these books enough credit. They don't have an easy task.

And neither do the writers in this anthology.

"Judy and the Dude"

We start this three tale issue off with a goofily titled tale of a woman who has impossible standards. Meet Judy Burk, the owner of a charter sea plane business, and love interest Roger Edmunds, a San Fran corporate gopher. Roger has to get into the remote Alaska wilderness to get some contracts signed right away and the prim Ms Burk is his only ticket to that outback. 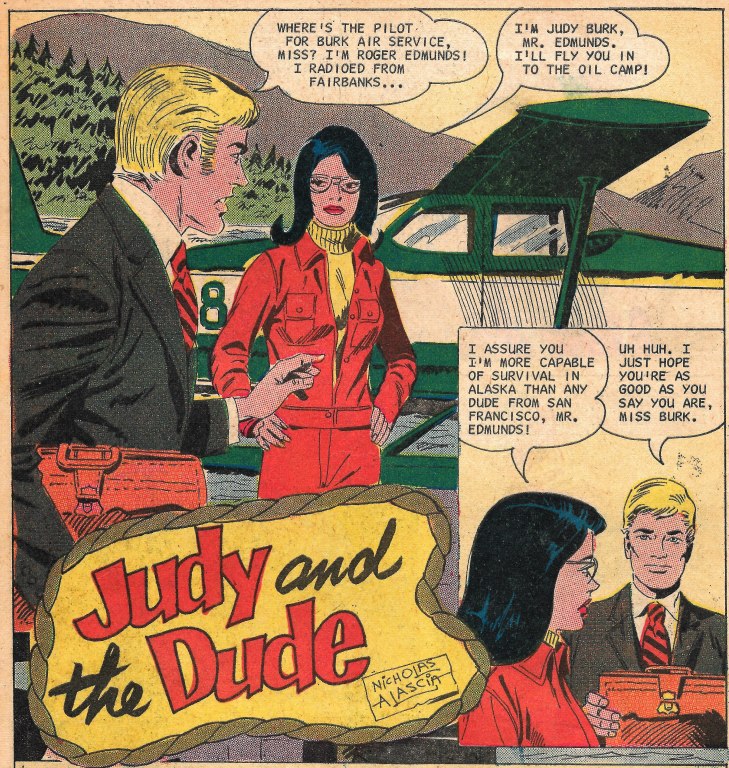 So of course there is a huge storm grounding them by a lake where things can get all cozy. But first we need some tension. It appears Judy is her own worst enemy when it comes to love as she is entirely too harsh and insulting. 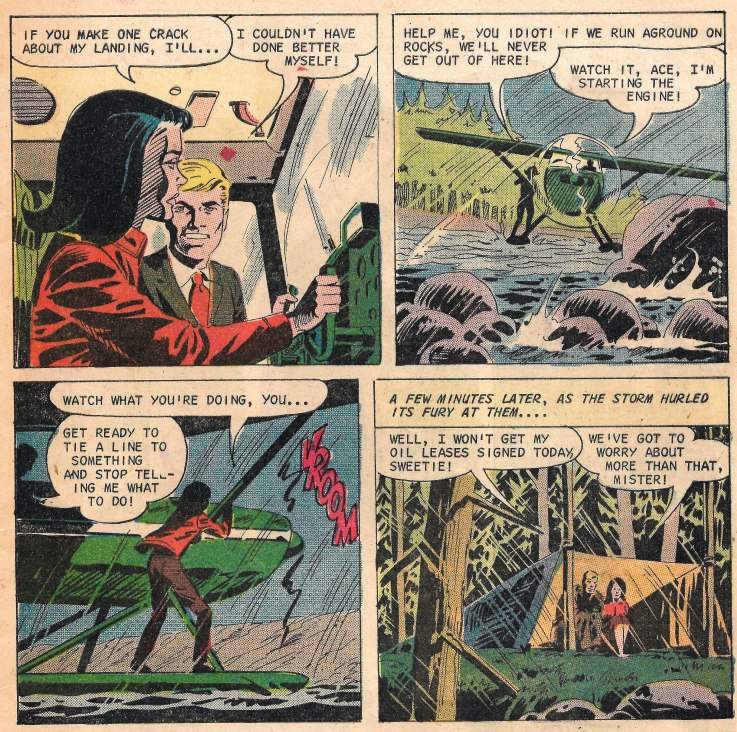 Roger just takes all the insults. He proves to be less a helpless city boy than Judy expects too, and it is this aspect that will turn hostility into attraction. 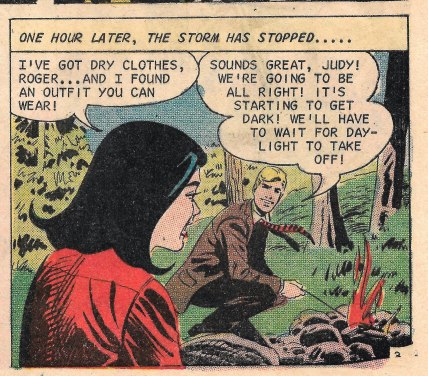 First he builds a fire, then he chokes his goose. Not a euphemism, I mean he finds a wild goose and he kills it with his bare hands. This starts to melt the icy heart of Judy, this discovery that Roger has the ability to handle any situation. 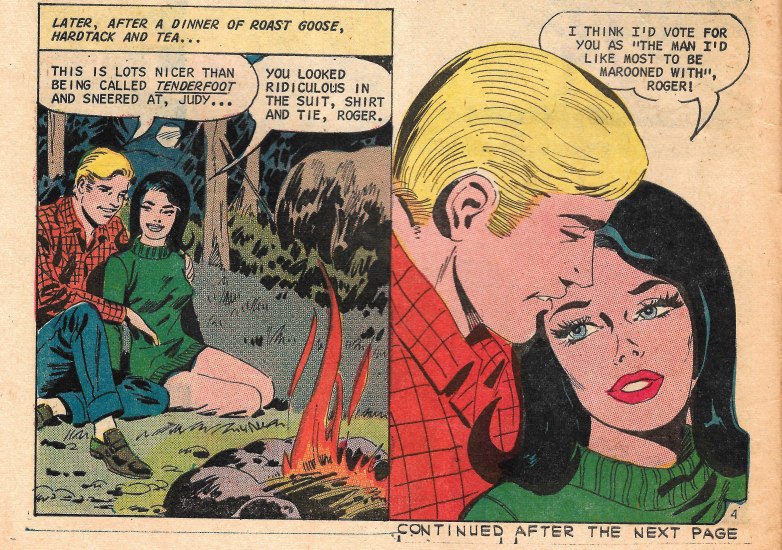 Judy even unburdens herself on Roger, explaining the lofty bar of her Uncle and Dad have set for any man who would win her heart. They share a fireside kiss and…NO SEX! Not yet, you impatient monkeys. Judy doesn't fall that easily. 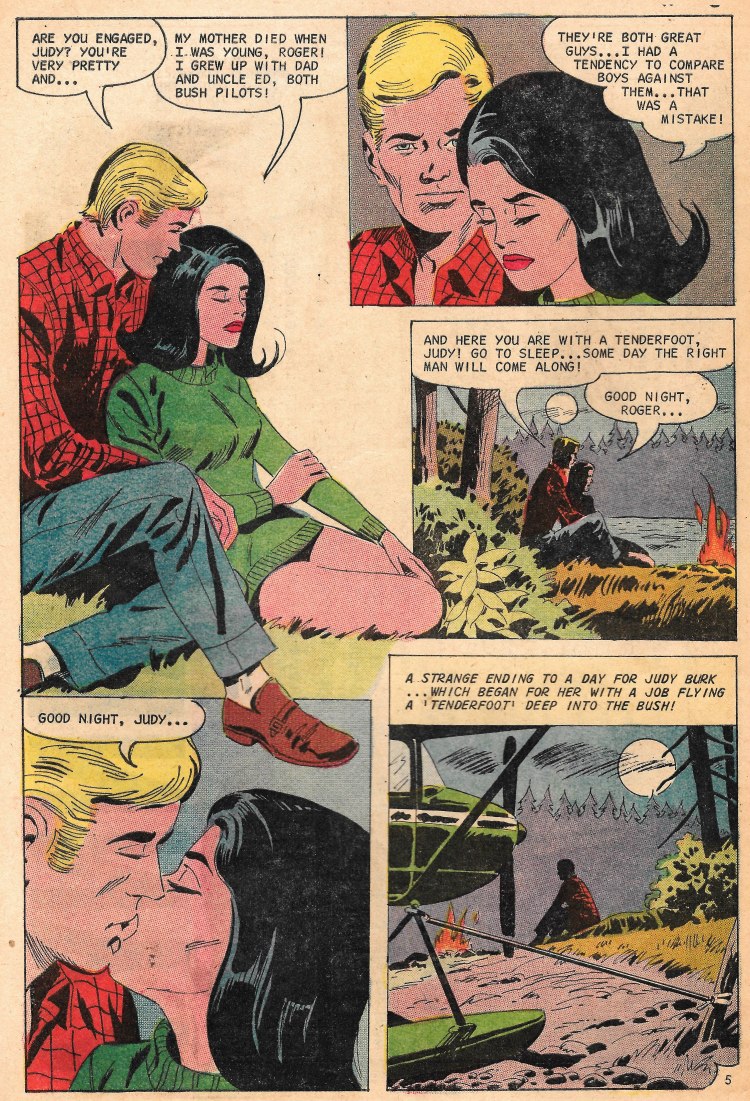 And the morning after kissing him Judy is already regretting having any kind of emotional feelings for Roger. Not only that, but she looks to cut him loose at the first failure. 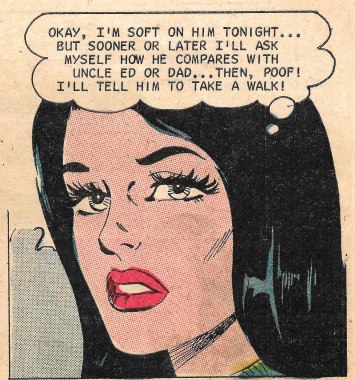 But Roger just pours on the charm by continuing to be this impossible paragon of Renaissance man, knowing everything from fishing… 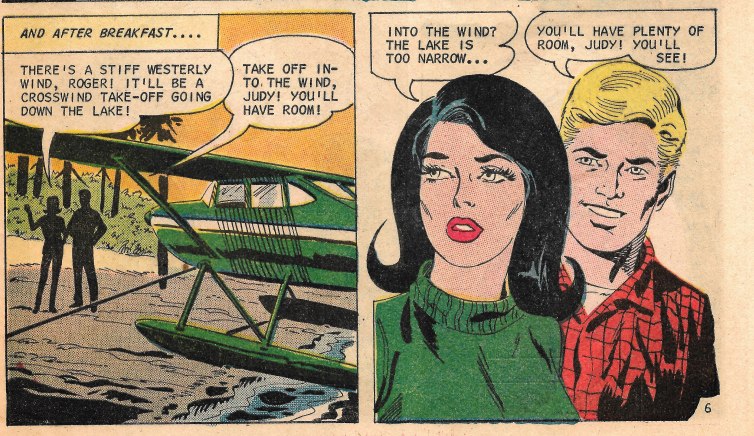 All of this leads to Judy putting aside her fears of Roger never measuring up and they fall madly in love with each other. 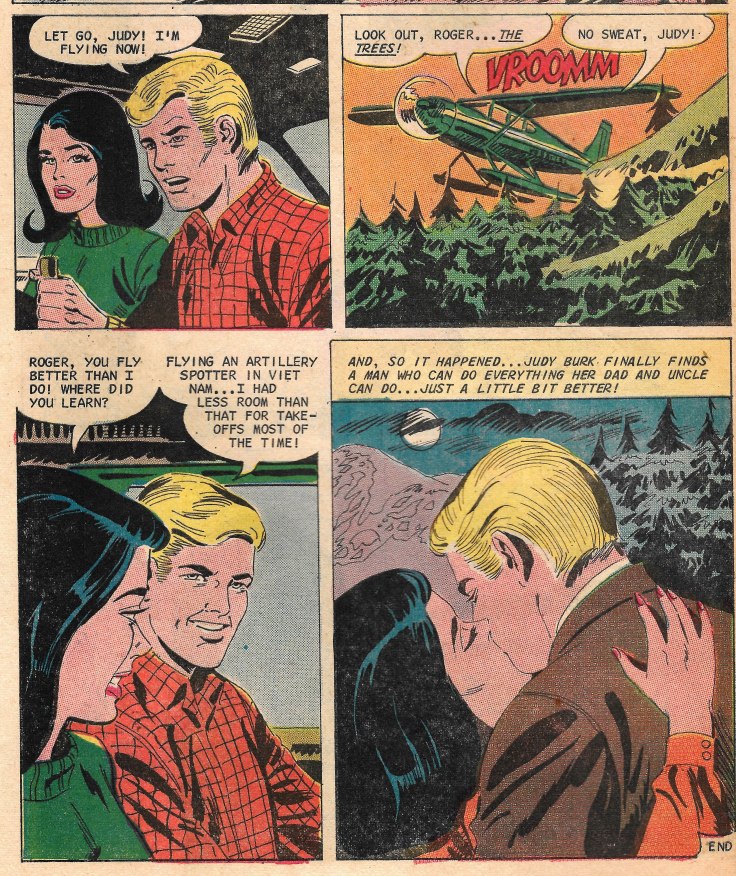 Which leaves me with the thought of how cool an anti-romance comic would be where at the end of every story the couple ends up splitting up…Roger goes back to the city and forgets all about Judy or Judy moves to the city with him, regretting it for years before divorcing him. Where are those books?

Writer/Artist - Unknown
Moving on to story number two, we find this insulting title accompanying a story of infidelity and football! At least it appears to be football. I'll show you what I mean later. 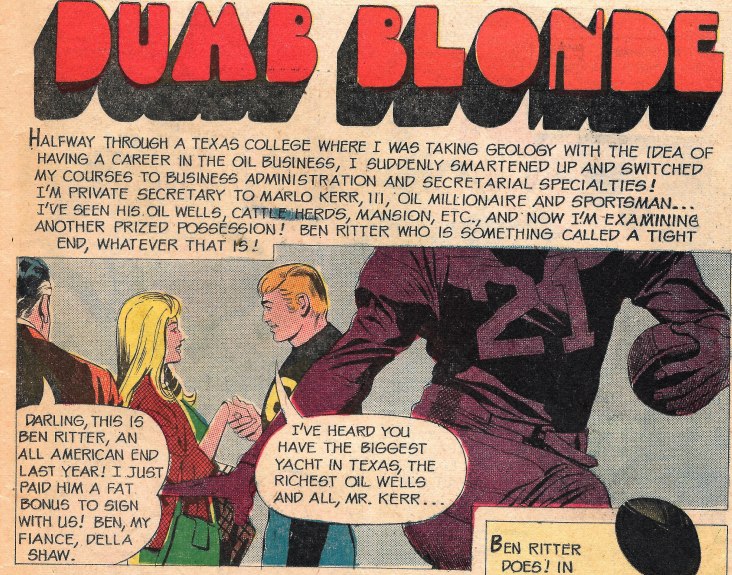 Meet Della Shaw, who as the intro states is not at all a feminist icon. She could have been a geologist, but "smartened up" and switched to business school so she could be a secretary. Because "woman's work" and whatnot. And right now she is both the private secretary AND fiancé of rich, philandering jerk Marlo Kerr, III.

The story isn't about her love for him though. It's the story of her love for his tight end. No, not THAT tight end! I mean the player on the football team he owns: Ben Ritter. 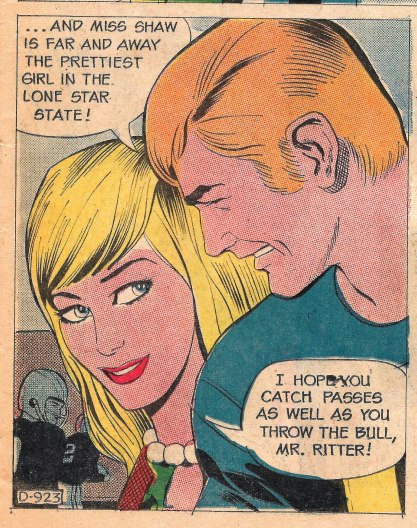 They trade a few casual flirtations before the game. 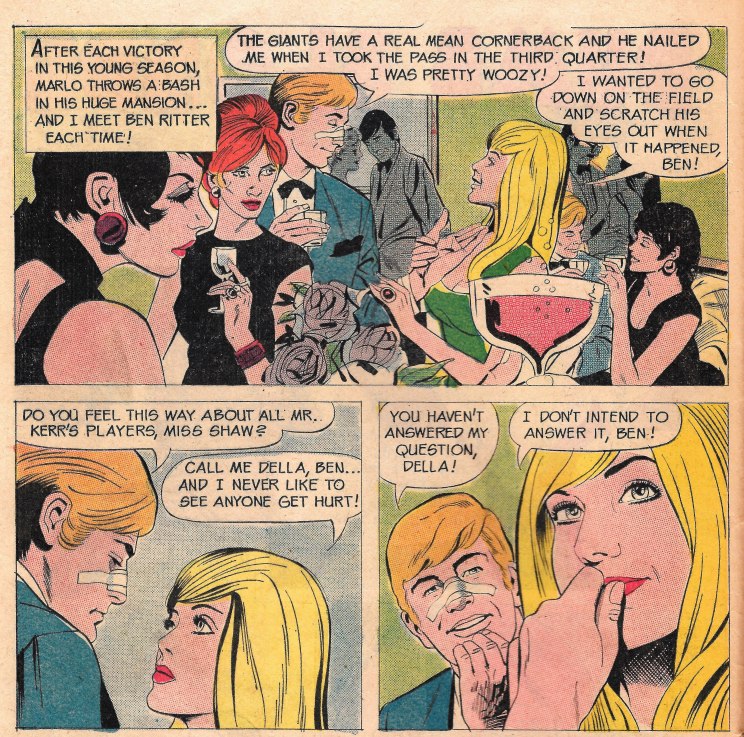 …and a few more at the afterparty. Sounds like Della has some pretty clear feelings for Ben.

WAIT! This can't be! Della can't fall for Ben. She's with MARLO! That would be like she was slutting around on her man. And Marlo is faithfu… 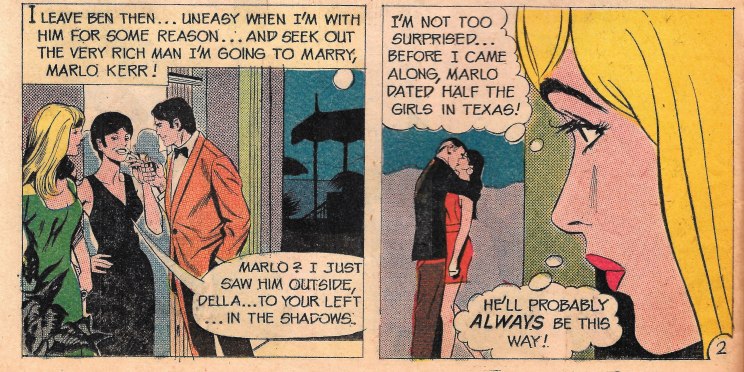 Scratch that. I see where this is going. Marlo is going to end up being a total cad. A major appeal to these stories is knowing the template before you even start reading. I know millions of women love this type of stuff but to me telegraphing this much of the story makes it uninteresting. The allure for the reader is finding out HOW the breakup of Marlo and Della occurs and how Ben wins her heart. The fact that the ending has already been given away isn't that big a deal. However I kind of like my story endings to be a complete mystery. 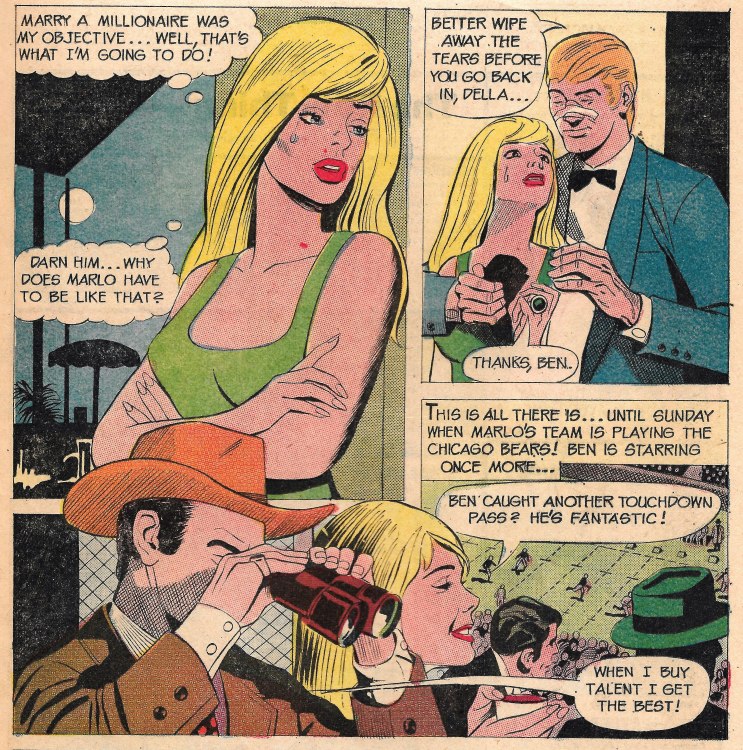 And of course Ben is there to comfort her, but in a platonic, nice guy way.

And Marlo starts treating Ben like a commodity and not a person. So of course when Ben gets permanently injured, Marlo cuts him loose in the most inhumane way. 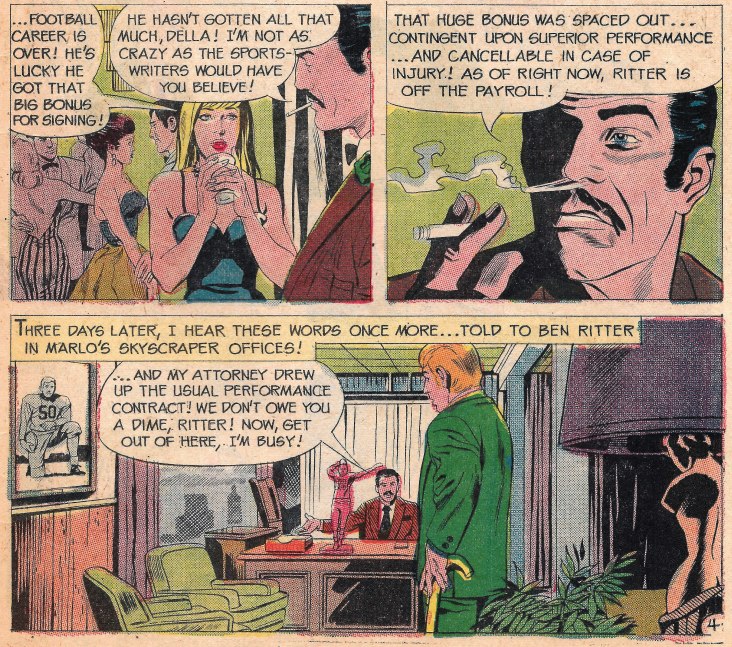 Notice the way Marlo is now revealed to be a smoker, much in contrast to the health-conscious football star? I think that is a subtle dig at Marlo's character, although this WAS the 70's. Smoking wasn't the automatic stigmata it is today. I don't quite know when the tide turned against showing smoking as alluring and glamorous. 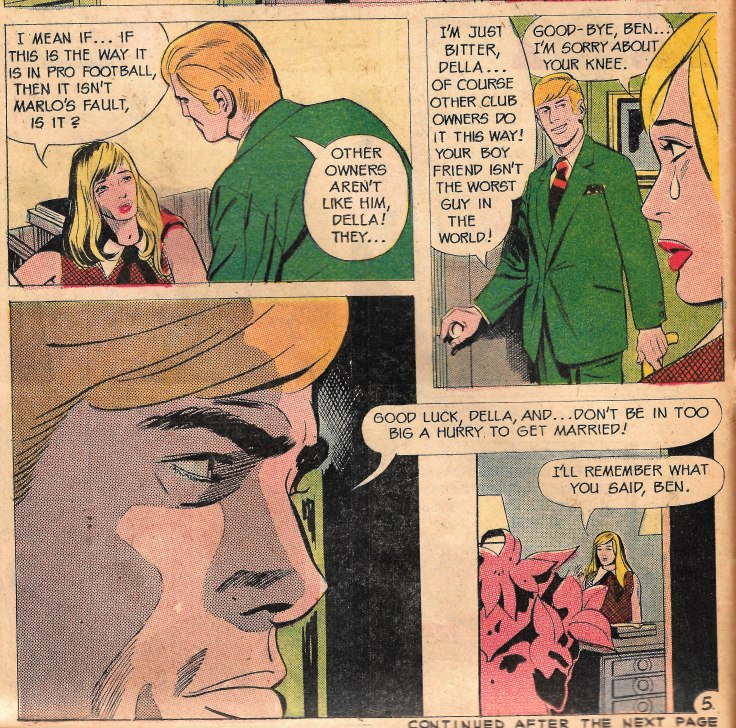 Either way, this leads to a tear-filled goodbye between Della and Ben. 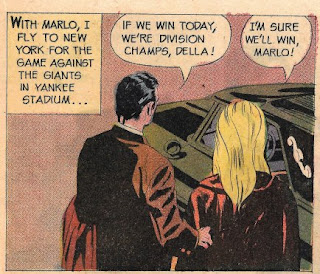 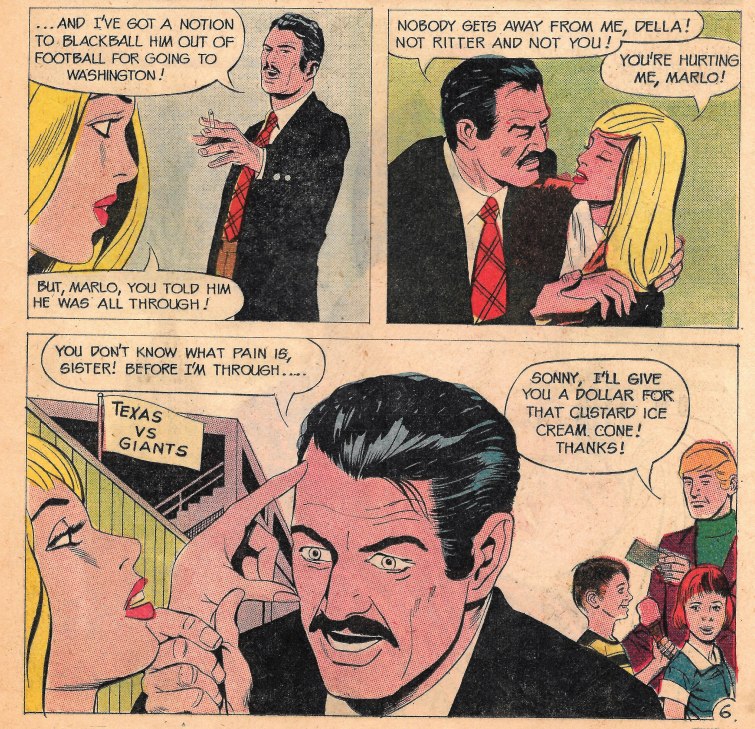 Marlo ends up showing his true jerk-face colors at the game. He not only intends on blackballing Ben, but also starts physically abusing Della. Which, when Ben witnesses as he shows up unexpectedly, makes Ben hungry for a kid's ice cream. 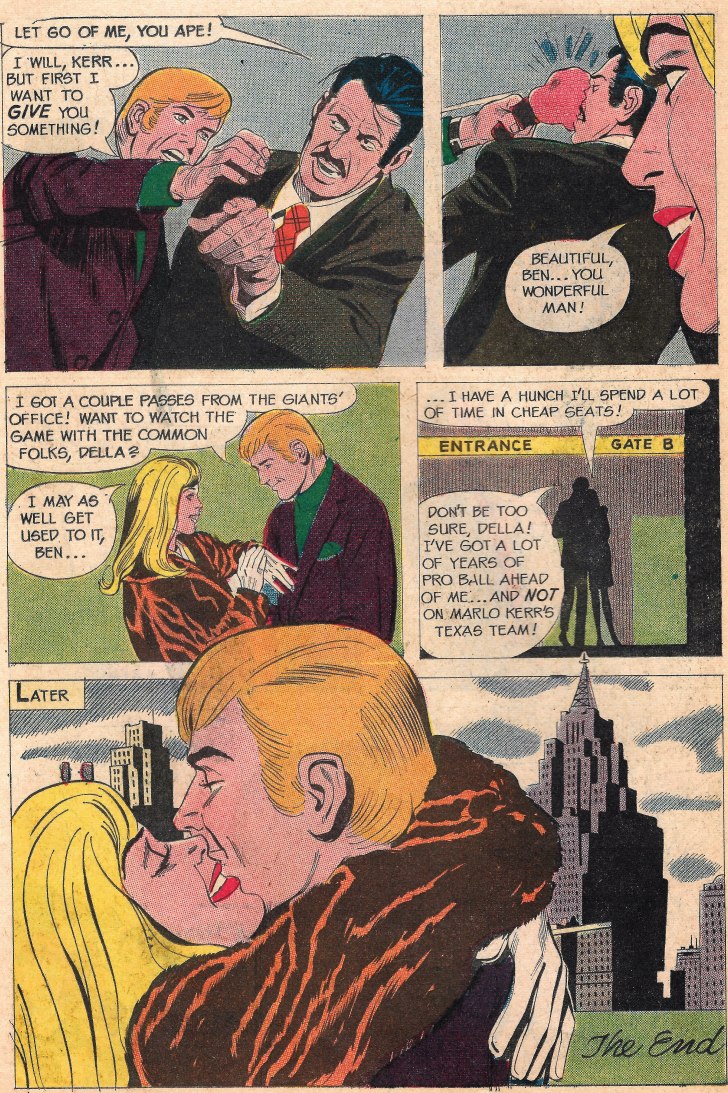 Leading to Ben showing Marlo the business end of a blizzard and then running off to live a life of poverty with Della. 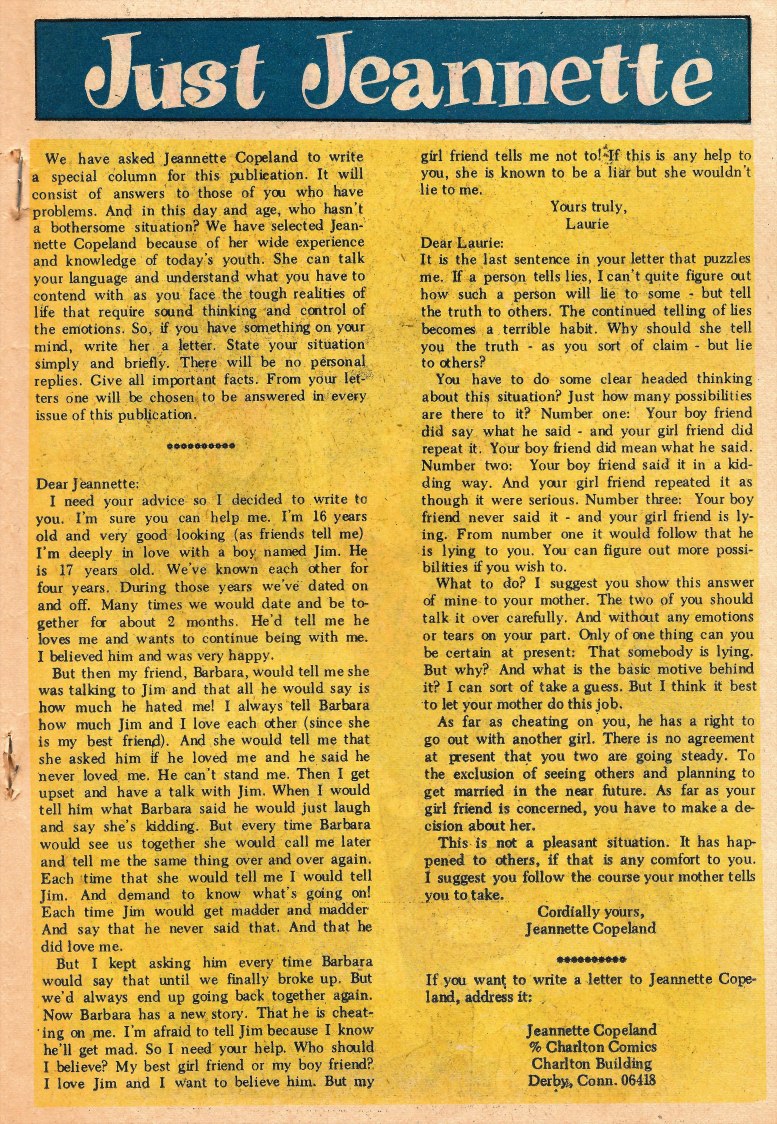 In a nod to magazines at the time, we get a "Miss Manners" page called Just Jeannette, reprinted here for your entertainment. Seems like the answer to this question was "go ask your mother." Wonder how many of the answers in this column were directions to seek parental guidance?

"The Face of Love"

The last full-length tale is our title story, a tale of an unsuccessful painter and his soulmate and sole model. Meet Derek, who only paints his love Maureen. However, he can't make ends meet and he claims he does not want a wife. 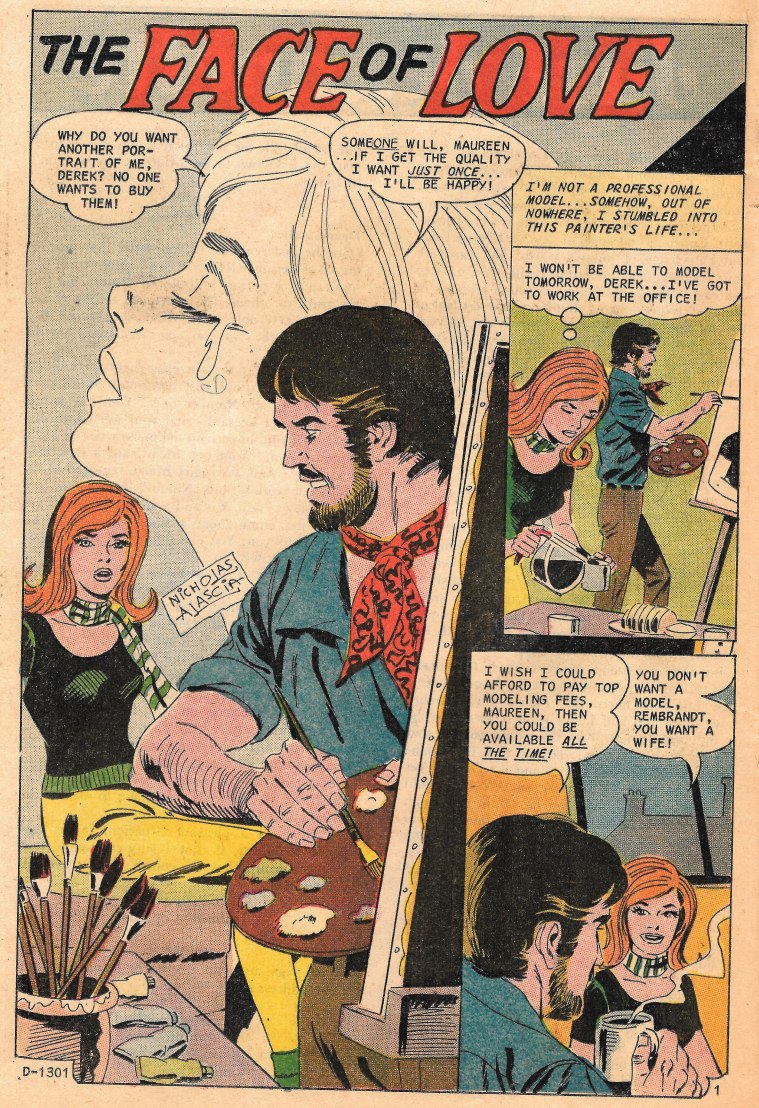 In fact, he's kind of a jerky-jerkface about it…

Finally, after sponging money off Maureen for pages, Derek paints the perfect series of pictures of her. 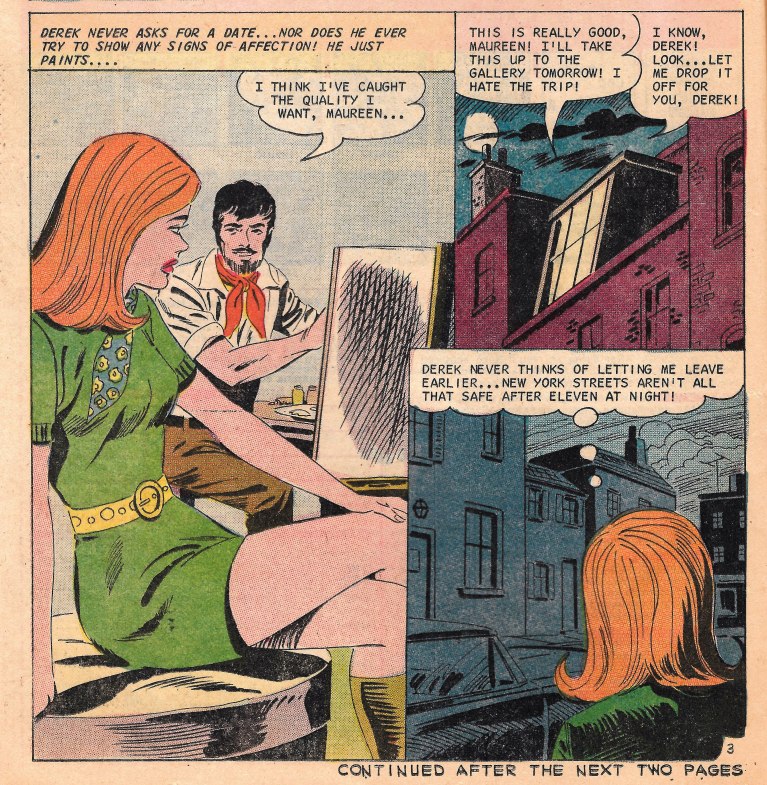 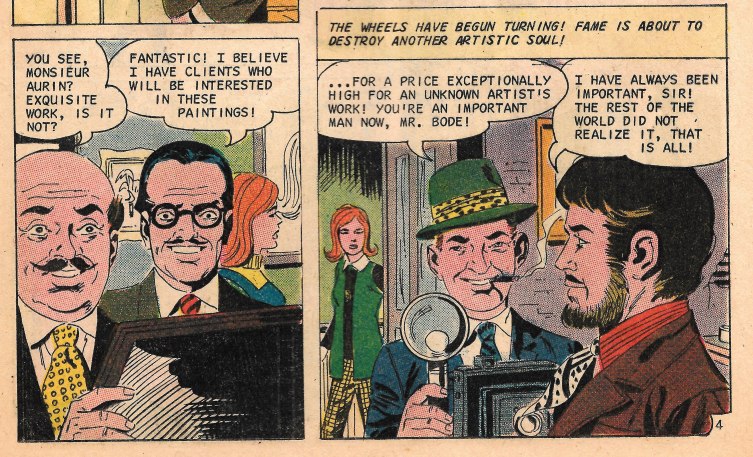 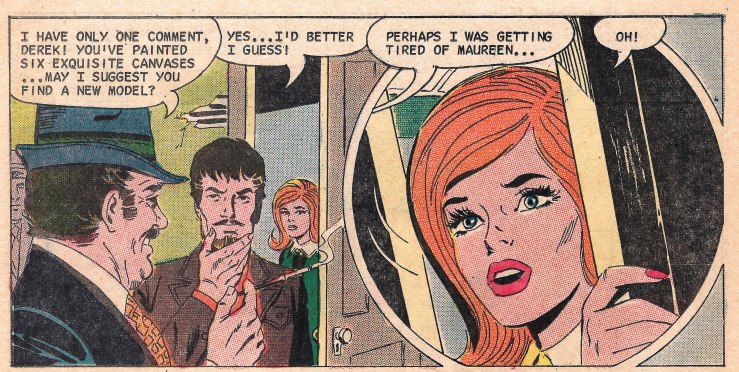 …so she leaves him and becomes a full-time model for a better looking blonde guy that can afford to buy his own paints and has his own studio and who genuinely appears to adore her, caring only for her happiness. 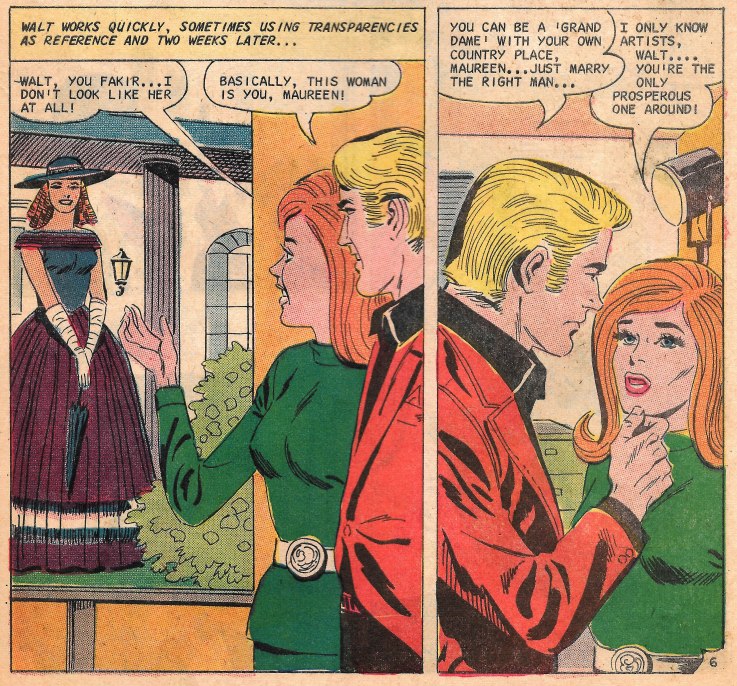 She ends up having a successful TV career and they fall madly in love and she lives happily ever after. The End!

What? No? That's not how it ends? She bumps into Derek again?

And he regrets losing her? Really? THAT is how it will end? No, no, no! I'm not buying this hogwash. 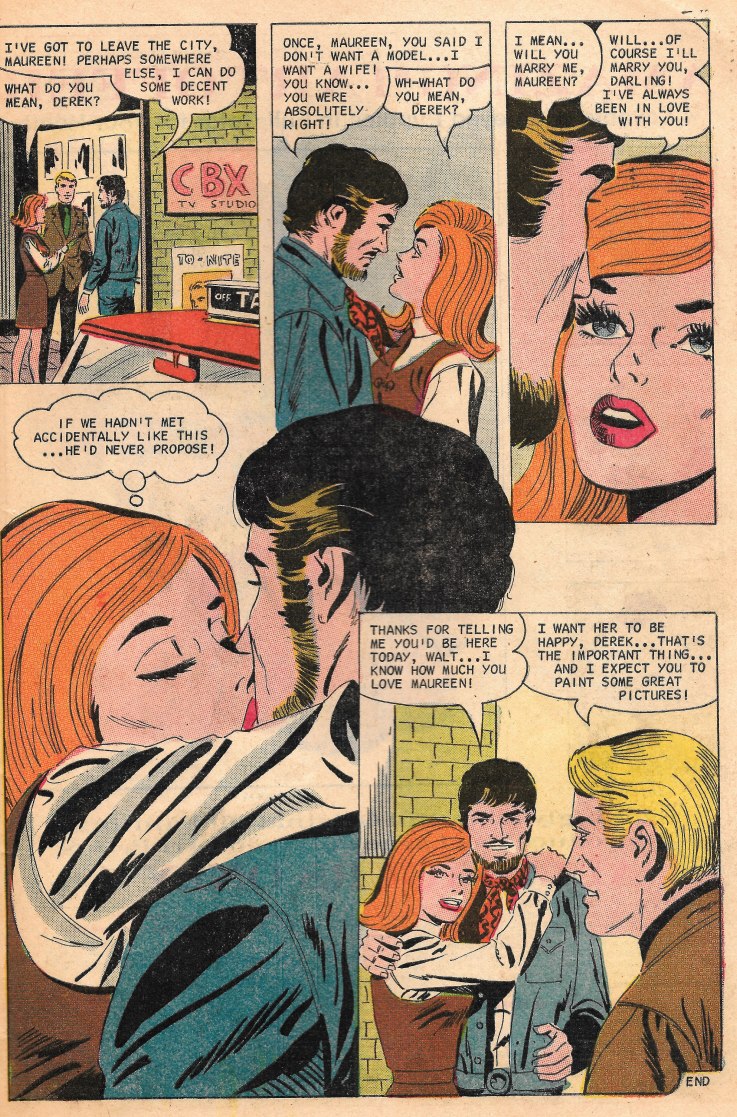 All I can say is Maureen has no self-respect. And she's missing a good thing with Walt. Derek will be wallowing in the bottom of a bottle in just a few short months, I can feel it.

So that's it…what? One more story? Where? 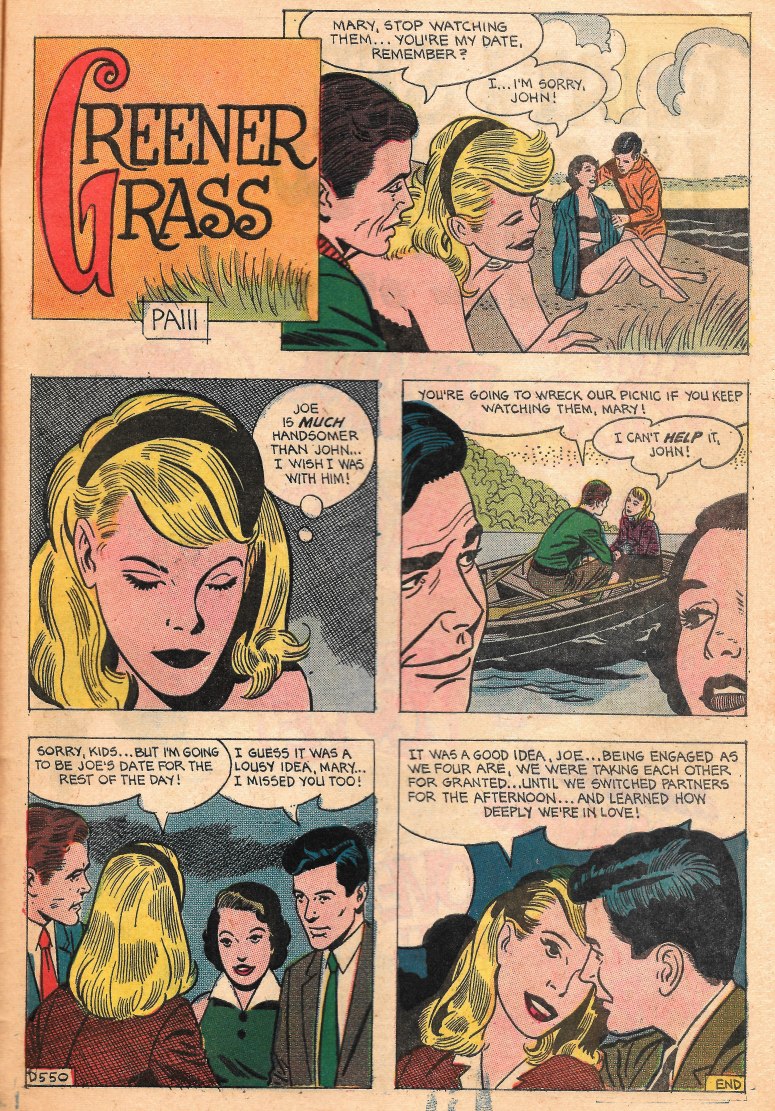 I am not commenting on that. Just look at it with me and wonder what went through the editor's mind when they put that in there.

If you want MORE comics centering on romance and dating, check out  Jacque Nodell's excellent blog "SEQUENTIAL CRUSH"   You'll be glad you did.
Posted by SonOfCthulhu at 8:25 PM