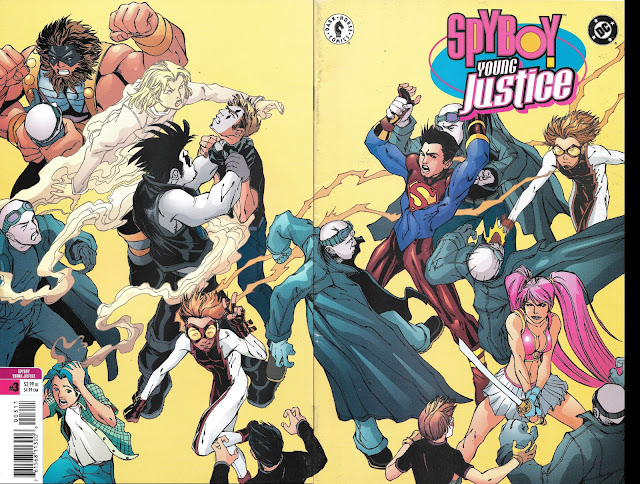 My books have melted together in the Texas heat!

Back near the middle of Summer, I put a majority of the Crapbox into storage.

I kept any books I was working on articles for or ones that I felt were coming due for a review soon and took the rest offsite. The reason was the imminent showing of my house for sale.

Frankly the Crapbox takes up a bunch of space.

I've found a source of ever-flowing crappy comics and one-offs and old stuff and hidden gems and…well, I'm kinda addicted at this point.

So they had to be tucked out of sight or else people couldn't walk through certain sections of my former home.

The house sale went fine by the way, and my hiatus caused by the subsequent move and resettlement. Approaching this weekend, I found time to finally crack the cover of a few of the boxes of comics and what to my eyes should appear?

How else could we explain the oddity found above? Image comics Peter David creation Spyboy melded into a story with Peter David's DC squad of junior, teenaged-but-NOT-AT-ALL-Titanee Young Justice? I mean this is something not found in nature. 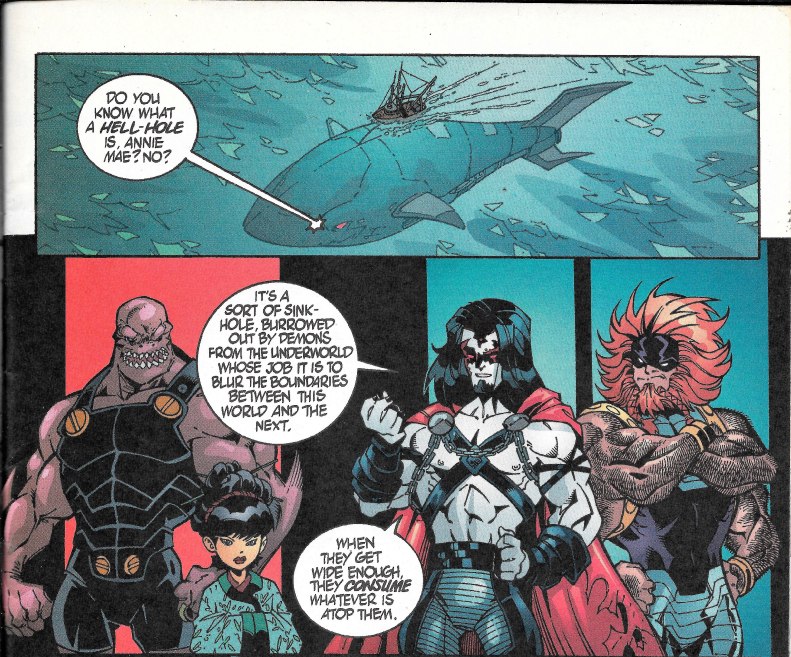 But since it is here, I suppose I should review it. Sadly I am bouncing in at issue three of a three part arc, so I really have missed all the setup. Here we have Young Justice's nemesis Harm, a guy I know nothing about. He's the guy with the black bat-smear across his face and the goofy bondage look. Harm has demon powers he got from an actual demon named "Buzz". No, I'm not sure what medication Peter David was on when he came up with that name.

The four-armed guy behind him is his current hench-thing, Rip Roar, who would surely be named "Fore Arm" or "Four Play" had he been created by Rob Liefeld. What I'm saying here is that David has good days on naming characters too. Rip Roar is the son of Darkseid (yes, THAT Darkseid) but he is estranged from his dad for reasons not discussed here.

On the other side of the aisle is the pixie-like Annie Mae, an immortal genius with some magical powers and a gift for using technology. She's rumored to have caused Spyboy's Mother's demise and caused other havoc for the "Spy" peoples.

Most of that havoc was wrecked with the help of her ally Slackjaw, a humanoid shark. Slackjaw is riding shotgun on this adventure, as we shall soon see.

Harm is about to drop all of Toyko into a sinkhole of truly hellish proportions, and that doesn't sit too well with Annie Mae, not that Harm takes much notice.

Where are our heroes? Funny you should ask that. All of them are fighting mini-me duplicates of each other in a series of panels that are both silly-cute and deadly-dangerous. It is interesting to note that once you put all the characters into the same frame, you realize that Peter David was going for the same vibe with both books at the same time. Sort of like all his work from these years had the same artistic tone. Almost like say…Pablo Picasso going through his Blue Period. Or me that Fall that I ate nothing but Taco Bueno bean burritos.

Probably the less said about that time, the better.

Anyway, David is going for an all-ages adventure with some very tame dicey bits thrown in, like this part there from Spyboy to mini-Spyboy. 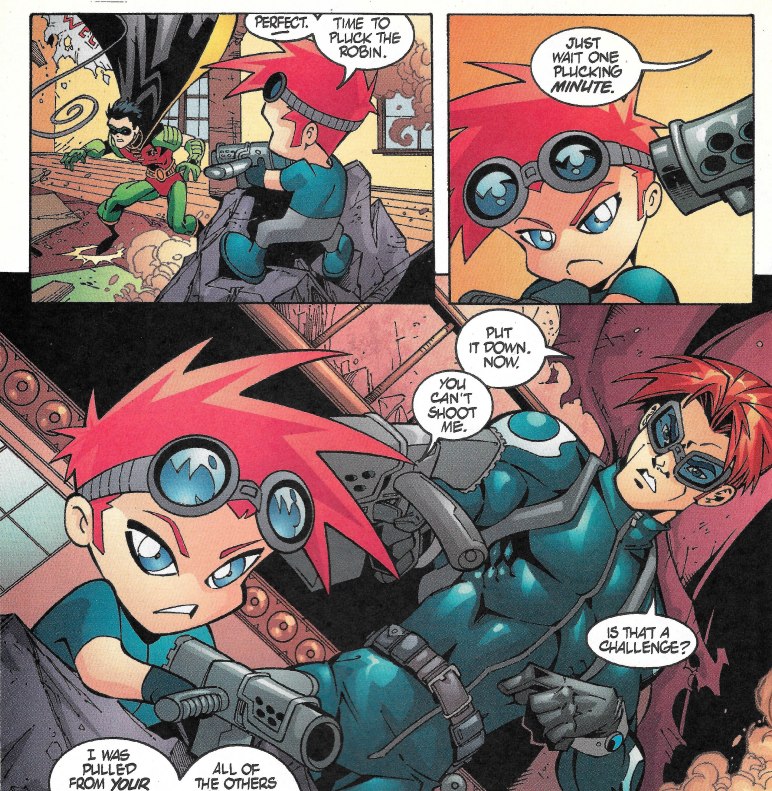 Cute and boarder-line PG-13. Kind of skirting the edge. Then we do silly stuff with Impulse and Superboy that has no rating higher than G for general audiences. 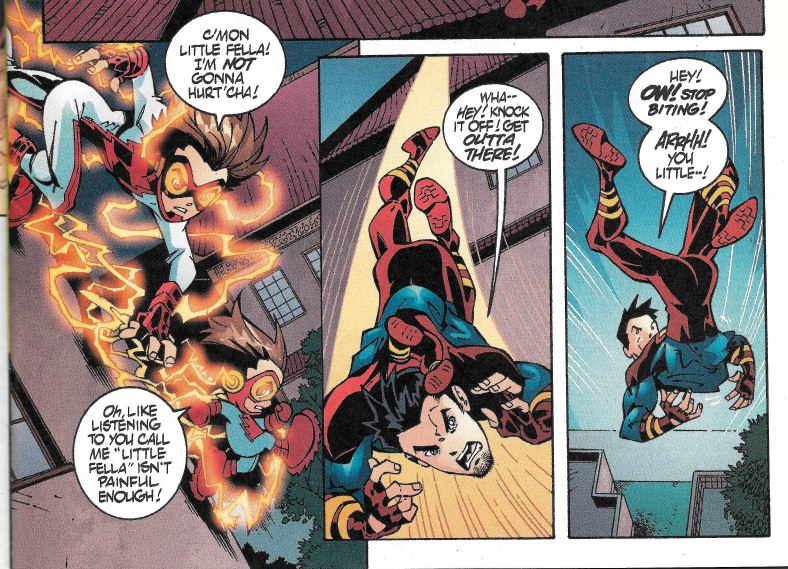 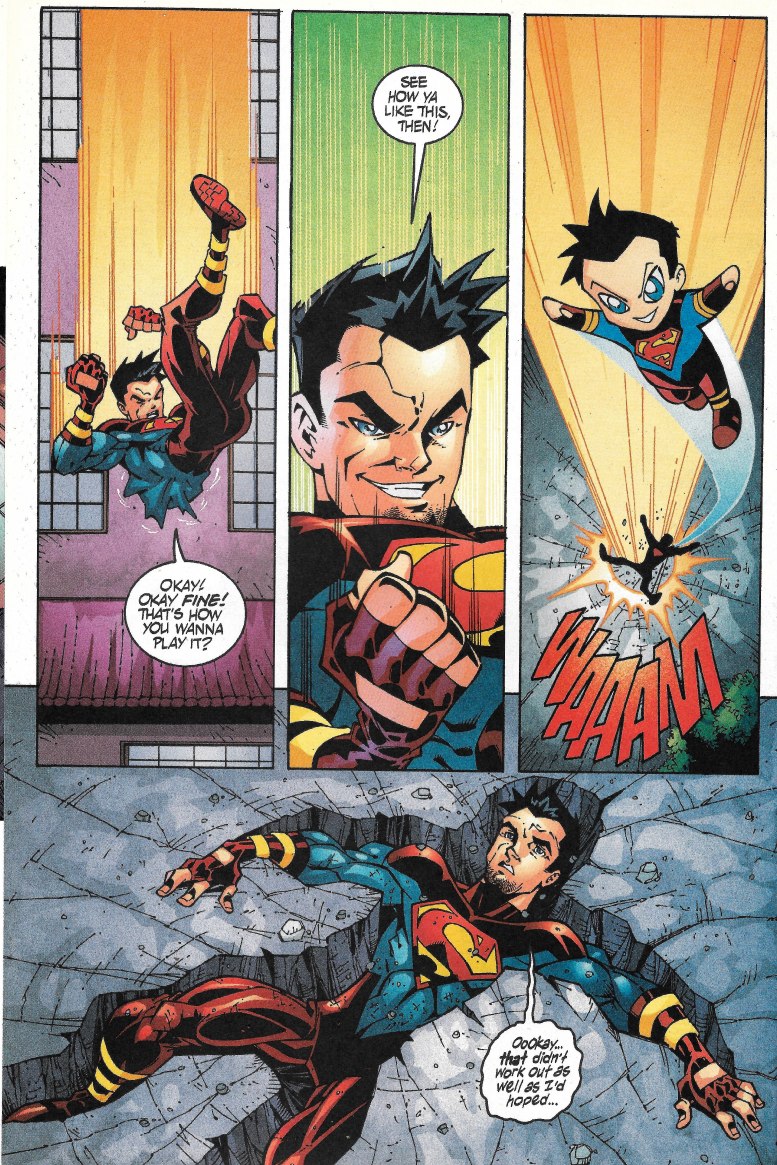 It makes for a fun series of panels that are light-hearted silliness. I say this even as Spyboy is dealing with the duality of his existence as a normal high school student and as the highly trained sleeper agent for S.H.I.R.T.S. (Secret Headquarters International Reconnaissance, Tactics, and Spies – see I CAN read Wikipedia when necessary).

Meanwhile, Slackjaw decides he's had enough of this talk of Tokyo going down (even though he wanted to level most of it in his first Spyboy appearance, seems he's rethought most of that). He tries to take on Rip Roar, who has apparently trashed him before. 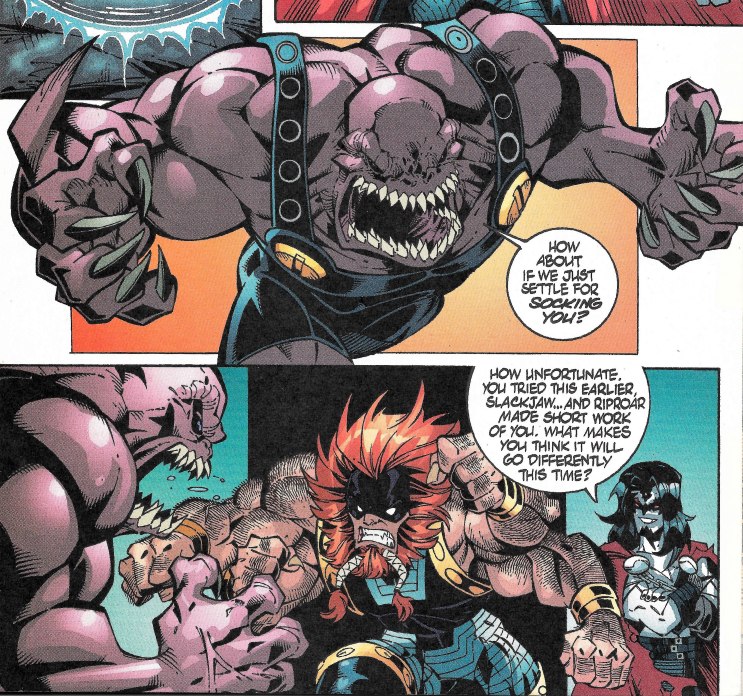 This time works out a bit differently. 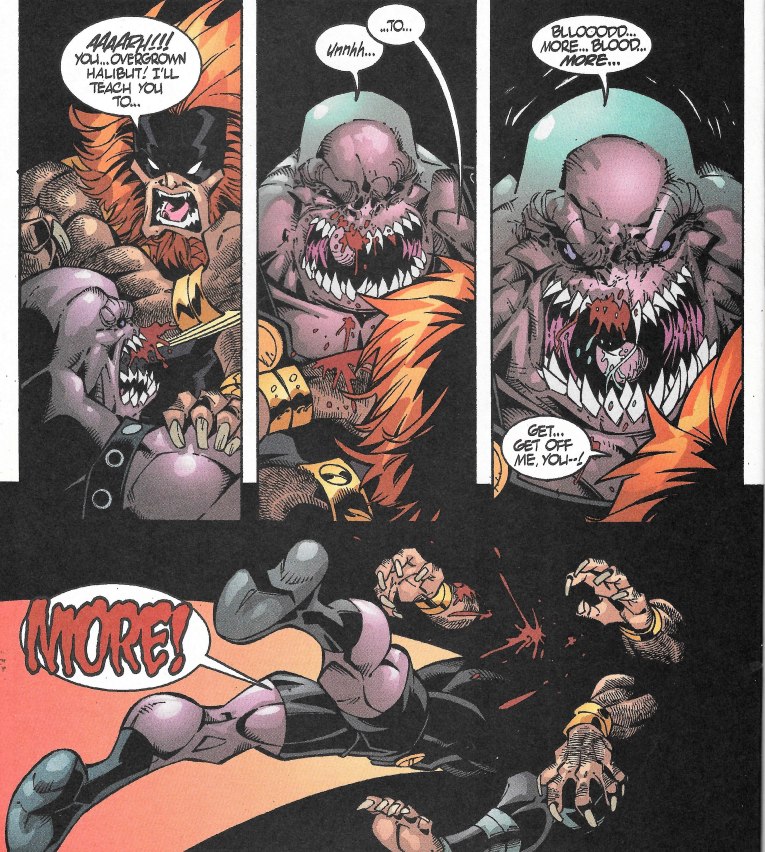 Did I mention Slackjaw was part shark? I did. Okay, then. THIS bloodlusty behavior is totally in character.

As that throwdown-showdown is taking place, Annie Mae, oh she of short stature and questionable reputation, freezes the bad guy Harm in place with some magic of her own. Right after he pulls this little number out and starts waving it around. Um, save something for the heroes of the book to do, okay guys? 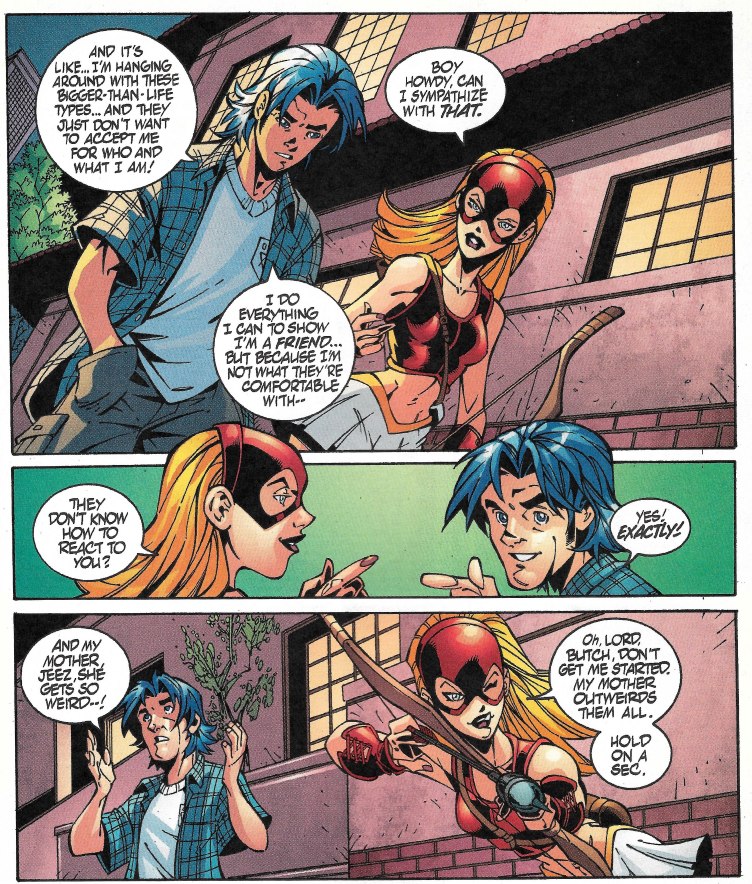 As I say that Arrowette and Spyboy's friend Butch are having a heart-to-heart about how they feel a bit out of touch with their more powered teammates. Impluse's mini rounds the corner and Arrowette creates an oil slick sending it smashing into a building. Then Spyboy shows up only he's out of his sleeper mode and is just plain Alex Fleming. Which is unfortunate as Robin is about to be axed by mini-Spyboy, at least until Spygirl performs some very tricky lawn bowling with her tiny clone. 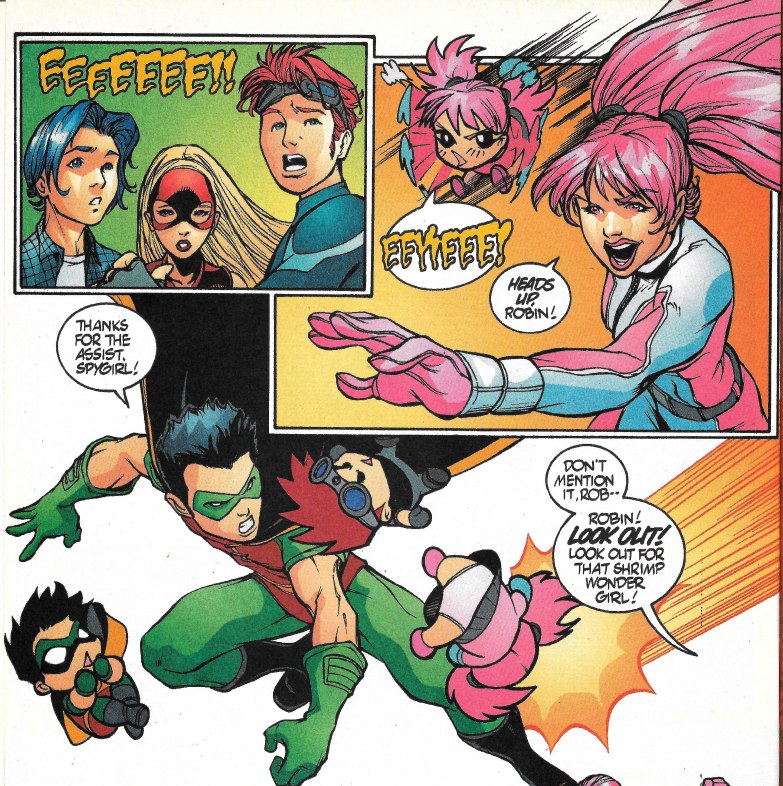 Which works but also ends up being a mistake, as said tiny clone unleashes a deadly toxin capable of killing everyone for miles around. This causes a panic which totally helps Harm ("helps Harm"? *shrugs*) attain his goal of opening his supernatural hell hole. 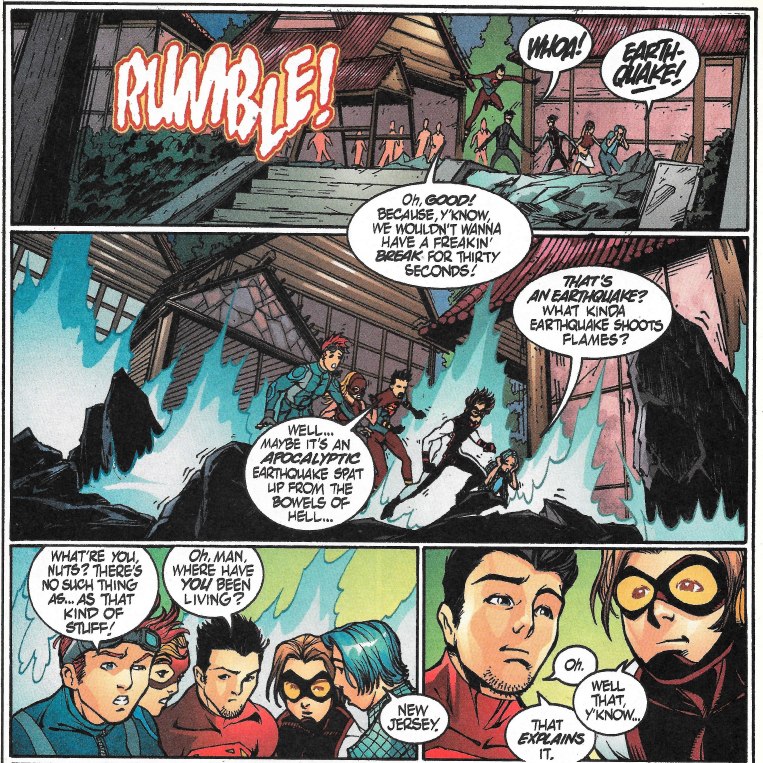 We get a joke about New Jersey followed by Secret, Young Justice's Teen made of smoke and also Harm's sister, doing a bit that riffs off the line just made two panels before…

…and then everyone realizes they are not in fact dying as the gas was harmless, but meant to cause widespread emotional distress necessary to open the rift wider.

Secret explains that she can pinpoint where the "Master" who is manipulating all of this is, and her teammates unexpectedly turn their back on allowing her to teleport them there with her power. Namely because that power ends up making the teleportee feel like they've been run through a ringer. 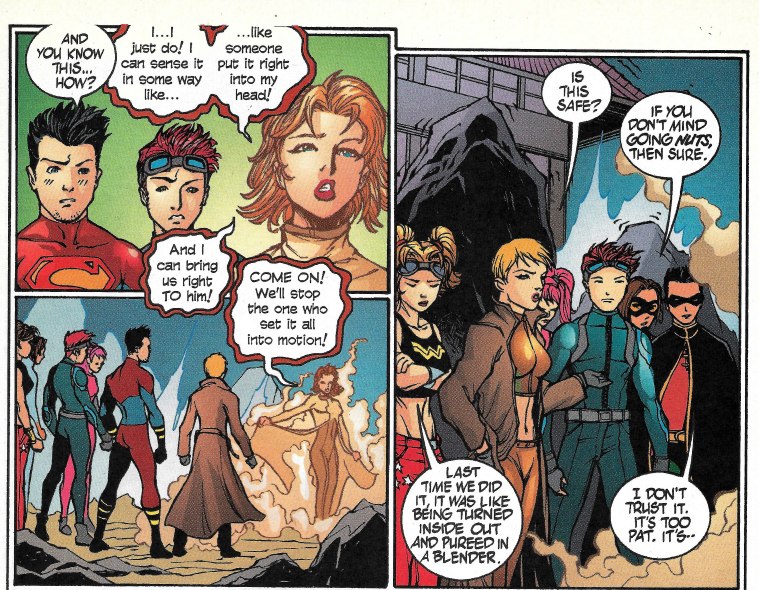 So they man up and do it anyway, right? That's what you expect. Except they don't. Her own teammates decide to NOT trust her. And Spyboy, only he isn't Spyboy because he is still in his Alex Fleming headspace, JUMPS in instead of Young Justice. This is the only piece of this whole story that feels wrong. The idea of these young team books are that the principles learn lessons and trust each other more, not less. 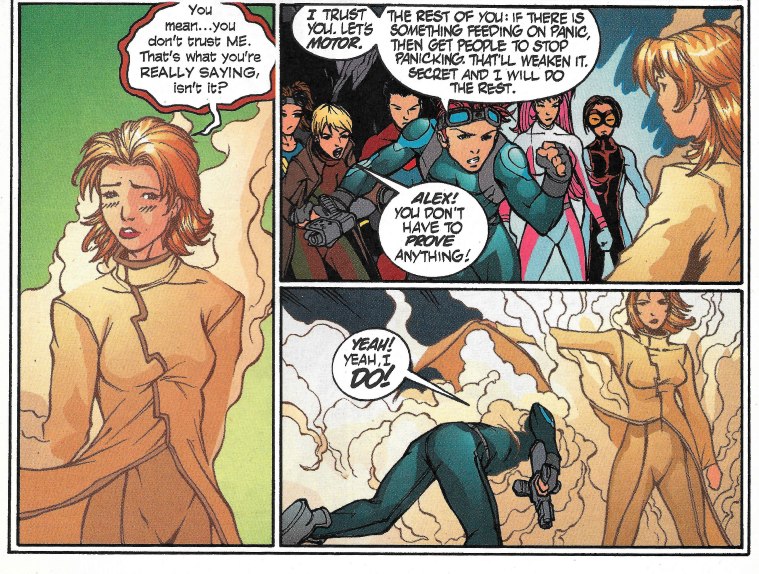 By the time they arrive, however, Annie Mae has made her escape and Slackjaw is ready to jump on anyone. He tackles Secret and they start to scrapping. Same with Spyboy and Harm. 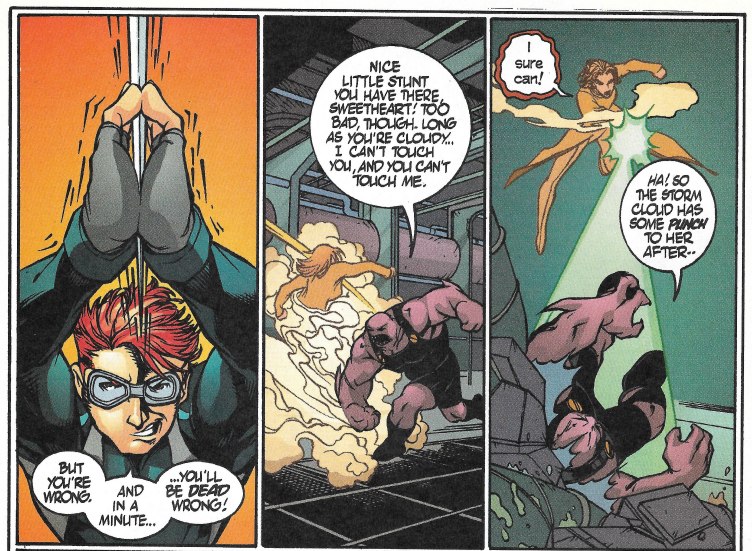 Harm about slices him in half, but Alex proves he's a test of Harm's metal. While this goes on Secret makes a discovery about Slackjaw. 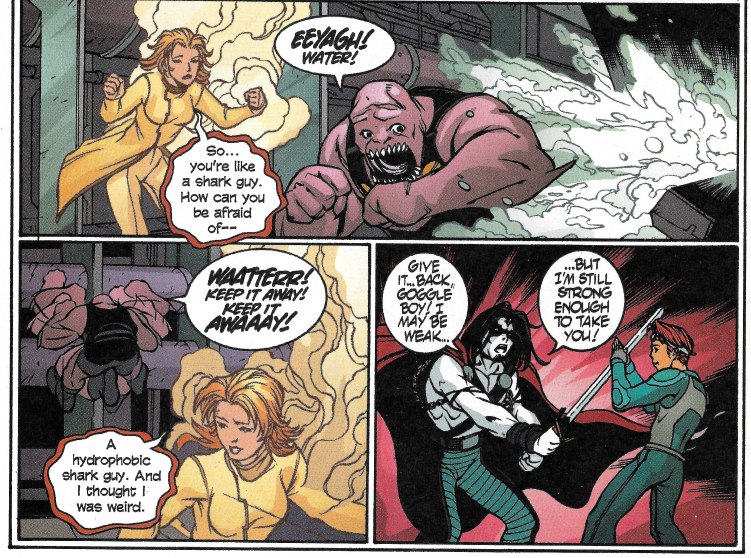 Yeah, that don't make much sense. Anyway, back to the other combatants. 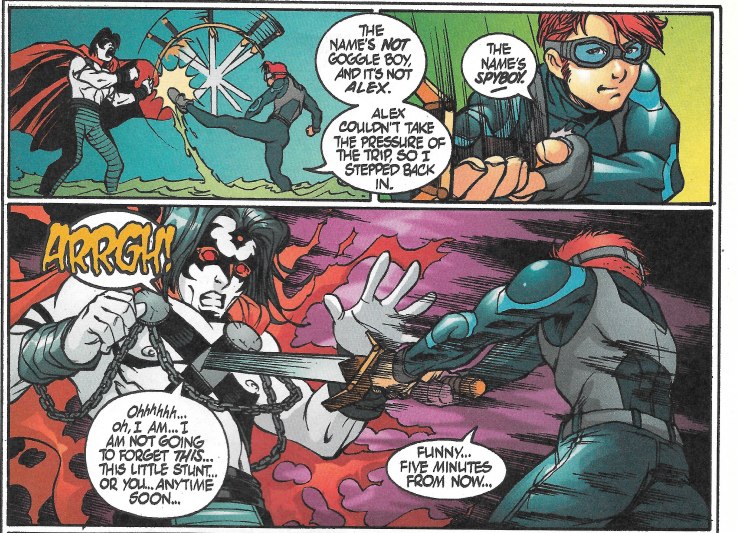 This neat little trick turns the tables on Harm with the good ole sword-point through the heart bit. Seems kinda drastic, but Spyboy does deal in criminals that would murder millions of people much more often than I do, so we can go with his decision to straight up murder the bad guy. 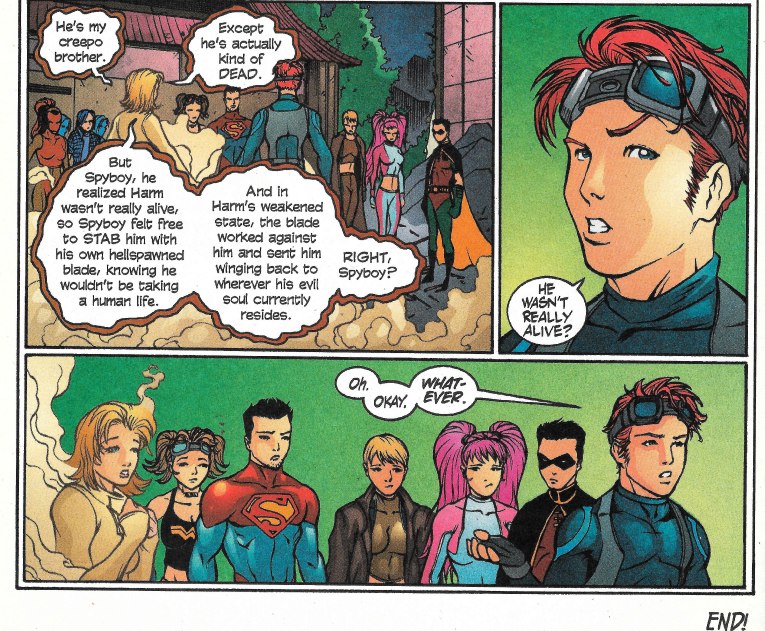 And with this quick (and I do mean quick) one page exit this odd melding of two completely unrelated books ends. The book felt light on character interactions and very much a fluff piece, but if you were fans of either series do yourself a favor and pick them up.

As for me and The Crapbox? I am going to see if I can find a few "unmelded" books to review next. Wish me luck!

(and thanks for continuing to read this blog! Promise I'm back until the next big move.)
Posted by SonOfCthulhu at 4:05 AM