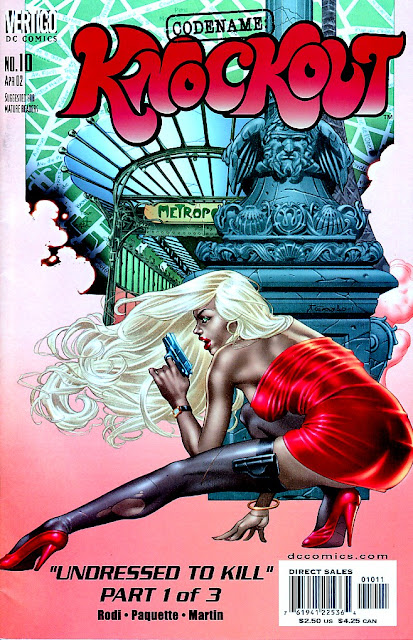 Spy spoof that turns out to be a gay, madcap affair

It’s hard to emphasize just how much I enjoyed Codename: Knockout. Each time I’ve re-read the issue has inevitably left me with a huge grin plastered from ear to ear and the desire to double check the rest of the crapbox to see if I’ve got another issue hiding somewhere. Sadly, I don’t. This mature-only Vertigo title lasted a scant 24 issues which were numbered 0-23. All the stories were written by Robert Rodi, an openly gay novelist who brings something very special to the table. The revolving door of artists to work on the book happened to stop on Yanick Paquette for the issue I hold in my hand. I last saw Paquette lending pencils to The Uncanny X-Men.

What does Codename: Knockout have that makes it so pleasing? I have to say it is the plotting and snappy dialogue. Not since the  Giffen-DeMatteis’ Justice League have I out-right laughed so hard at one comic book. Our setup here is a male-female spy duo who are currently double agents working for G.O.O.D. (Global Organization for the Obliteration of Dastardliness) to undermine E.V.I.L. (Extralegal Vendors of Iniquity and Licentiousness). The agents are blonde bombshell Angela St. Grace and her so-far-out-of-the-closet-he’s-in-the-next room partner Go Go Fiasco. Angela’s recently gotten both of them inducted into E.V.I.L. at the whim of her Father, who just so happens to be the organization’s leader. Angela has faked a conversion to the “dark side” so she can infiltrate the group. Go Go appears to be along for the ride.

We begin the merriment with Angela trying to not be late for their first E.V.I.L mission briefing. Unfortunately she has to wait on Go Go. Just a tidbit here: Go Go never knew his Father either, and Angela is trying to come to grips with her closely-held deduction that she may not be the E.V.I.L. leader’s only offspring. 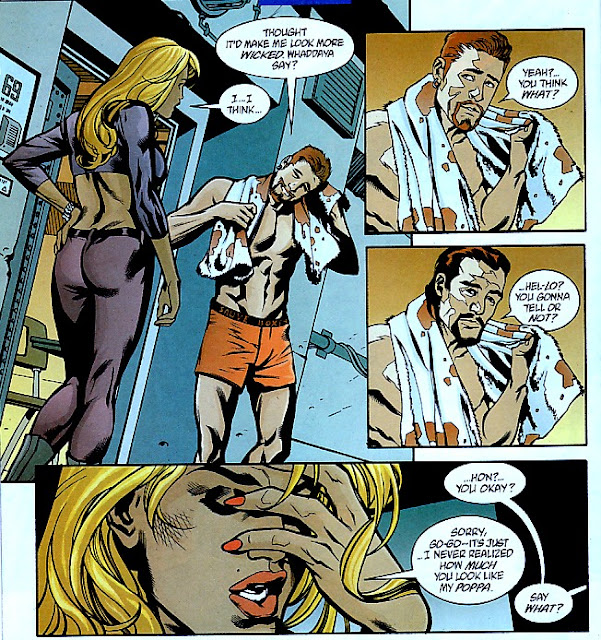 That middle panel is of course her Angela’s Father Damon’s head transposed onto Go Go’s body. Angela’s pronouncement causes Go Go to quickly shave off his beard. What follows is Angela trying to ignore her assumption while Damon and his right hand woman Anita try to brief the pair on a new mission to take out a competing international slavery ring/brothel. The lingering thought of Go Go’s parentage is kind of distracting though. Especially given the mannerisms Go Go and Damon share. 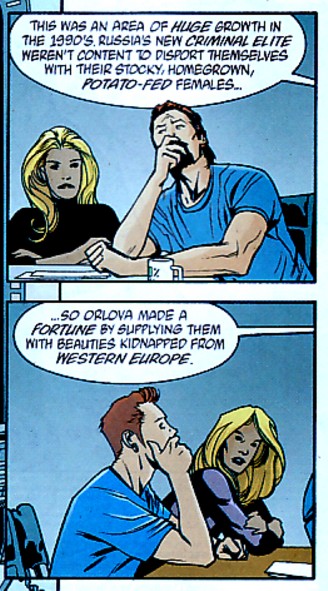 Which are very quickly driving Angela over the edge.

Anita forges ahead, providing both an explanation that the sex slave racketeer is beginning to expand into E.V.I.L.’s business ventures and a nice panty shot. 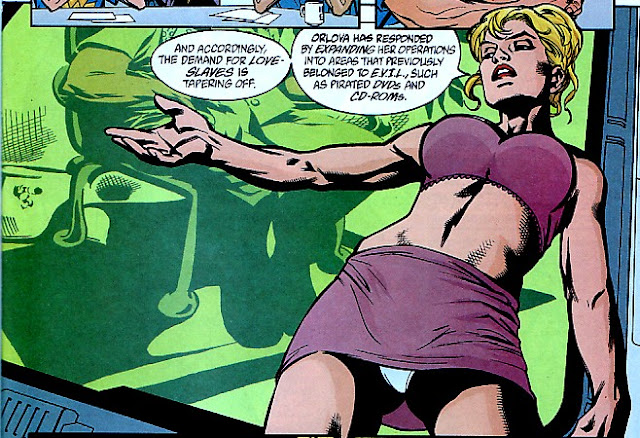 Anyway, they have a lead on the persons in charge being in Paris and are sending in three agents to remove the competition. Angela and Go Go are asked to go in as mere observers. The briefing concluded, Damon has to beat feet to make a prior appointment.

The lapsed Catholic in me would be slightly offended, but I know it’s all in good fun. Meanwhile, Go Go is not too taken with the other three members of the team, likening them to “The Munsters.” Actually he’s being too kind as they are much less humorous than the Munsters. He can’t get Angela to comment and for the first time notices how withdrawn she is. He tries to get her to come out of it by reminding her of how awful the slave trader must be that they are going to go after. 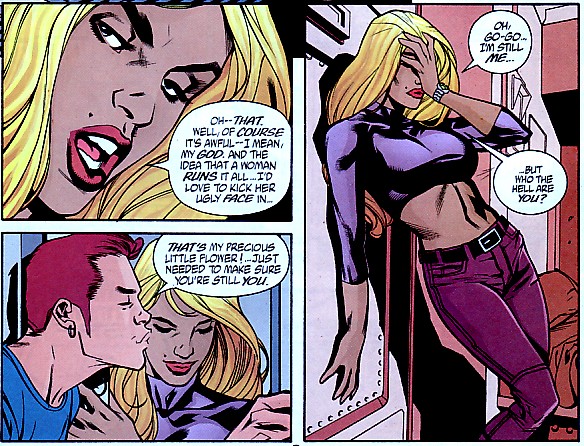 Poor Go Go doesn’t realize that he’s the reason she’s so distracted. And it doesn’t seem like Angela’s the only one. After saying goodbye to his daughter and her gay friend, Damon grills Anita about Go Go as well. Seems he’s getting a hint of something off, but is much too dense to know what. Anita’s not really the person to find out, as she and Angela are very distrustful of one another. Maybe with good reason, as Anita might be in danger of being replaced by Damon’s daughter. 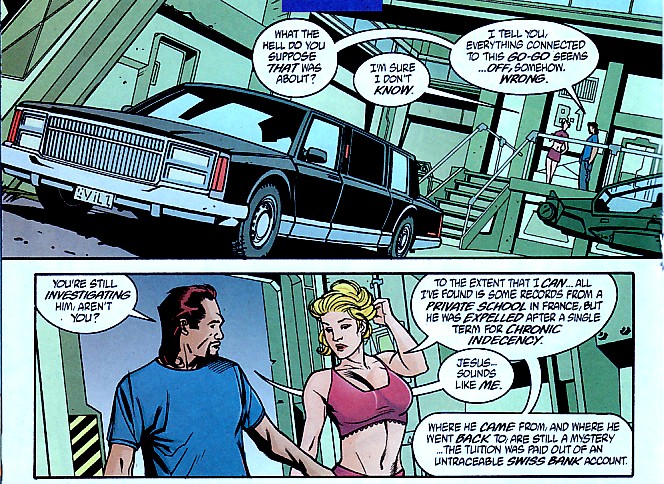 Oh, and speaking of something off, once our team arrives in Paris, Go Go is off to use Angela’s shower. Why he won’t stay in his room, she can’t figure out. Remember folks that Go Go is gay, so no hanky-panky is going on here. Just good clean fun. 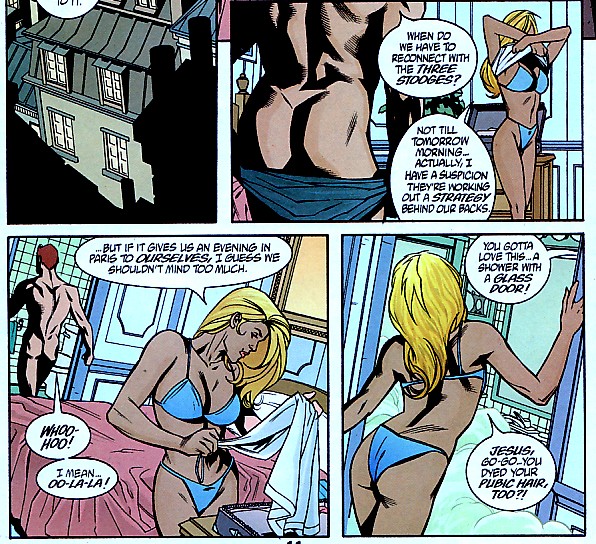 If you haven’t gotten it by now, it’s the witty banter between these two that keep the series from getting stale. The plot is advanced around these “Will and Grace” moments, but if you don’t warm up to Go Go and Angela’s interplay the book just isn’t for you.

The three stoogies plan out a strategy, two of them heading to check out the far suburbs and one of them staying in town canvassing “whore central”. This a great plan that will come back to bite them. Because while two of the E.V.I.L. agents are somewhere in traffic, the solo agent in town is made by the opposing side and dispatched in a rather permanent way.

Meanwhile our two main characters are trying out a fancy French restaurant, when Angela decides to drop the bomb on Go Go. And not the “explosion-go-boom” kind you are used to seeing in spy movies. Angela brings up Go Go’s long lost Father. 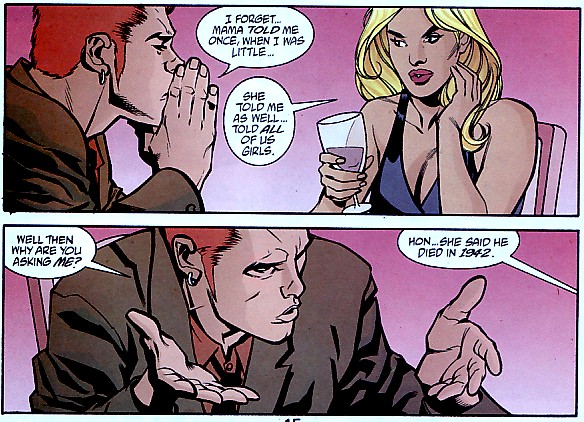 Go Go not getting it is just too funny for words. I may have giggled more at The Extremist, but at least here the comedy is intentional. Angela presses on. 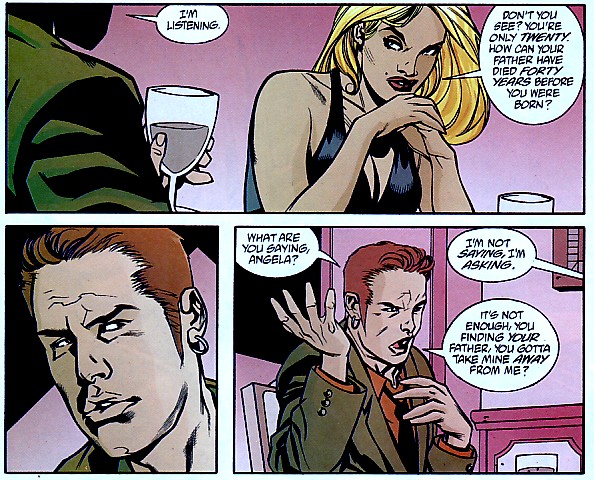 Go Go then proceeds to drama queen out, which is even richer. Angela keeps working up to his Father being someone else (and Angela thinks she has a good idea who, too!) but Go Go is too far gone. After this final outburst, he storms out. I can’t quit you, Codename: Knockout. You are just too, too good. At the same time as all this is going on, Damon gets word that his agent has been “compromised”. Couldn’t happen at a worse time, either.

I hate it when naked women are massaging my feet and I get bad news. Totally takes me out of the mood. Damon is worried about where his daughter is and with great reason. For at that moment, Angela is fighting off an attacker who means to add her to his next shipment. 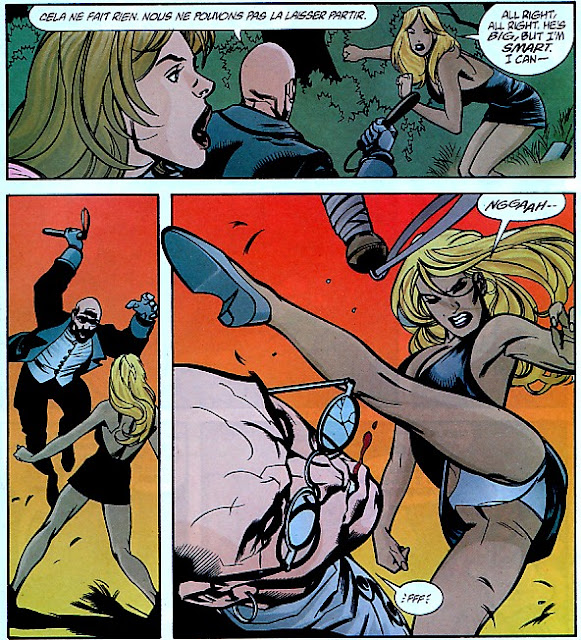 Pity this great panty-shot/kick doesn’t do her any good. Angela is done in by the hooker who’s partnered up with baldy here. One quick shot and she’s out like a light. When she wakes up she’s in Siberia, a long way from both Daddy and Go Go. If only we could break this Codename: Knockout’s secret since the story is continued next issue. *sigh*

Posted by SonOfCthulhu at 8:17 PM