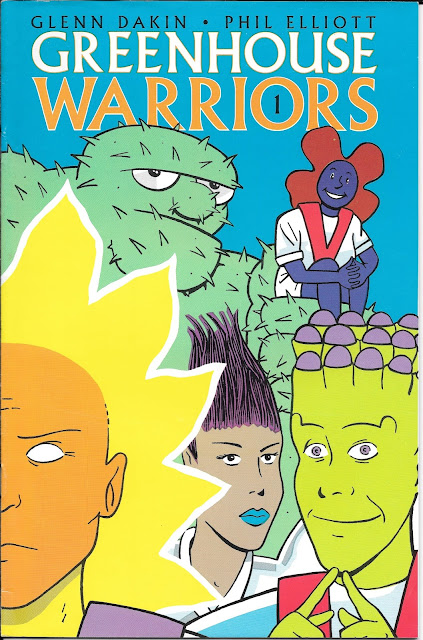 What you are smelling isn't fertilizer


It seemed like a good idea at the time.


I'm sure that's what Tundra Publishing thought back in 1992 when they put out Greenhouse Warriors, a six-issue limited series featuring "horticultural heroes with their very own style of flower power." Plant-based superheroes sounds kind of off the beaten track. However, Tundra had already proven itself to be a publisher willing to take risks, putting out Mike Allred's Madman Adventures, Scott McCloud's Understanding Comics, Steve Bissette's horror anthology Taboo (which would serialize parts of Alan Moore's From Hell) and Peter Milligan's controversial Skin.

Tundra Publishing was the brainchild of Kevin Eastman, oh he of Turtle Power creating fame, to help other comic book artists and writers. 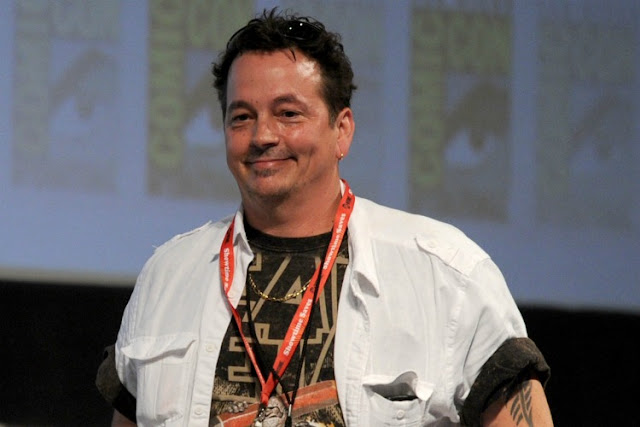 To Eastman, Tundra seemed like a good idea at the time.

The publishing house allowed other creators to develop books that would not have a home at one of the big companies while still allowing that writer or artist to draw a paycheck. Tundra was the marketing arm and production house, working to pay both printing costs and up front salaries for a 50% stake in the produced work.

How did Eastman come up with this idea? Eastman's own words: "Basically, I'd meet them (writers or artists) at conventions and they'd said they're stuck doing Spider-Man, they had a wife and a kid at home, and they had to make ends meet. But if they really had a chance, they said they'd really do this [at Tundra] and I'd hear this repeatedly. So, I went back to those artists because I had the money and said I'd give them the chance. I asked them what they'd like to do. They could pick their dream projects that they'd wanna do and I would provide the funding so that they could survive and they didn't have to do Spider-Man for a year and I'll fund the projects and I just wanted to make my money back from the profits to keep my company going."

That is such an admirable goal. Tundra began in 1990 and closed doors in 1993. During that brief three year span it had managed to burn through $14 million dollars. Wikipedia states the reason was that most of the Tundra products were awkwardly aimed toward a dubious middle-ground reader, someone lost in the gulf between comic shops and book shops. They were adult oriented stories and most didn't find a wide enough audience to break even. 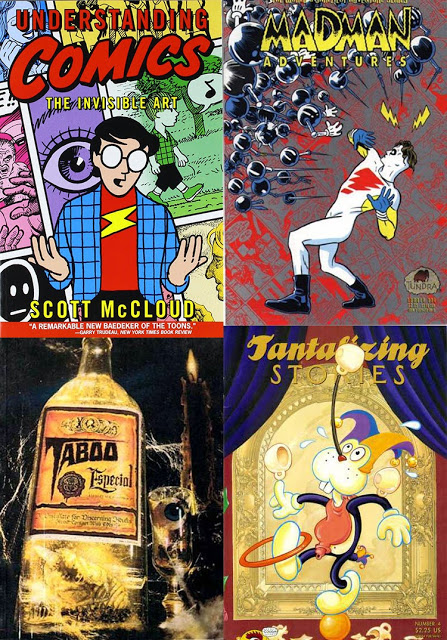 As the produced work above attests, there were plenty of winners in this grab bag of story types…just some were like Greenhouse Warriors. And by that, I mean bizarrely strange stories that really don't hit the mark for 90% of readers.

Bizarre, I say? Oh yes! Verily. Sit back and listen as I share with you the crazy things between these pulpy covers. First off we need to dispense with the guilt of the writing and art chores, the honor of which goes to Glenn Dakin and Phil Elliott. Not sure which did what and I’m lazy so I'm not looking it up either. If you title your contributions to the work as "Ploughed and Scattered by" this is what you earn from me.

On to the story, and boy is it a doozy. First off we begin in the ecological disaster that is the future with one of the Greenhouse Warriors in an area known ironically as the "Paradise Zone". The Greenhouse Warriors are plants that walk around like people. They were created by a mad scientist BECAUSE reasons. Okay there is a reason, but you aren't going to like it. 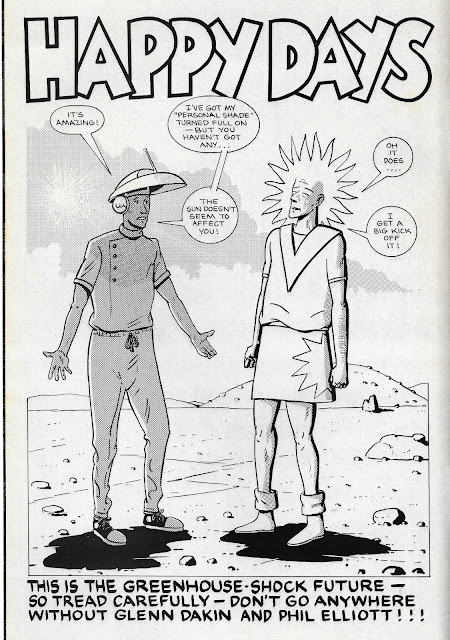 Anyway, we begin with Heliocanthus (Sunflower) working with locals in the blistering heat of the Paradise Zone. Apparently it is so sunny there that people have to wear odd shaped hats that somehow have settings for more or less "personal shade". All of which do nothing to protect their arms that I can tell. So while this researcher is getting cancer, Heliocanthus wanders around trying to solve a problem that we, the audience, haven't been told about yet. 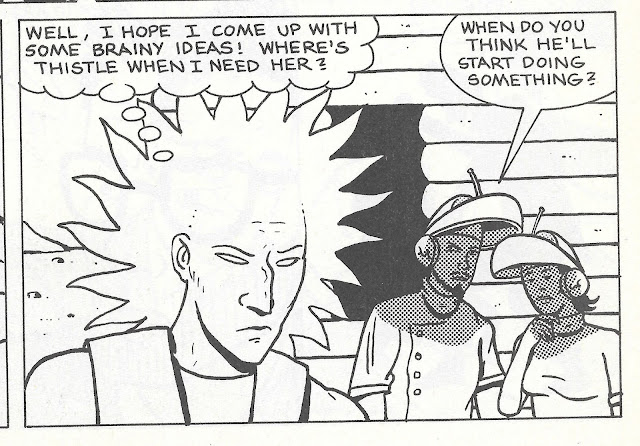 Cut to the mad scientist who created these weird plant-people who is trying to read the daily news. 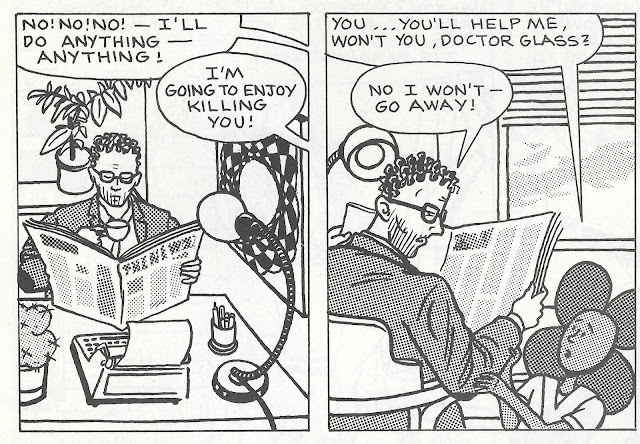 ...while two of his creations play "Kill all humans," which is a game he doesn't approve of. 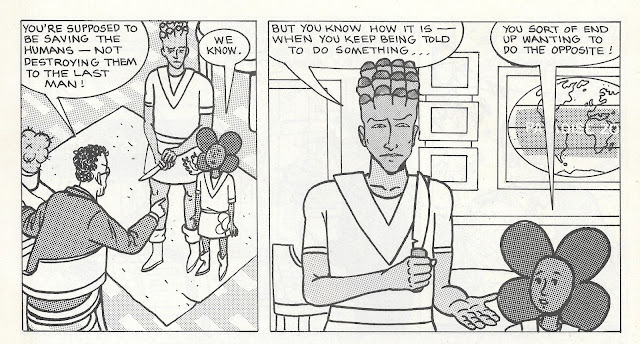 And these are the heroes who are going to save humanity. I rest my case. This is page FOUR, people!

Anyway. The cactus on the table grows an eye and starts talking to Dr. Glass, who recounts his entire history to the potted fellow. The doctor laments having the responsibilities of the world resting on his and his creation's shoulders. He longs for the simpler times of days gone by… 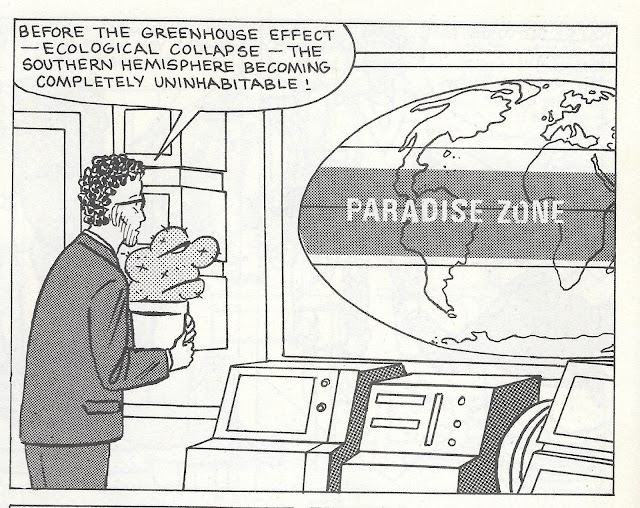 Days when people could walk out in the sunlight unprotected. Also, I'd like to point out that this doctor (and the writer) don't know shit about geography. The southern hemisphere is the bottom half of the world. What they are showing on the map is the Equatorial Zone. Also, I can't think of a reason half the planet (if it was the entire bottom hemisphere) would be affected by climate change and the other half wouldn't be devastated too. I mean it's not like there is a wall or something between them.


But whatever…tell us more of those simpler times, doc. 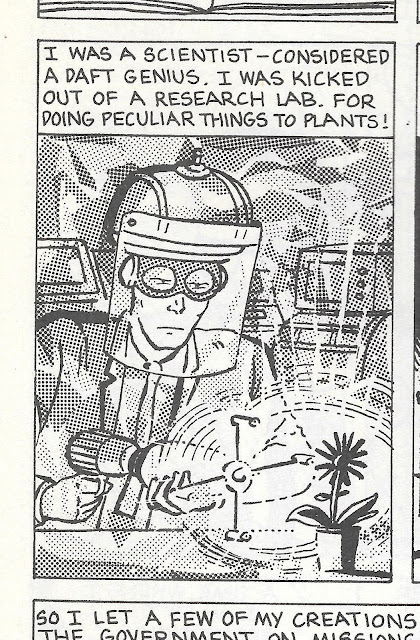 So he was…diddling plants? I mean he doesn't say he was "experimenting on plants." He clearly states he was doing "peculiar things" to plants. Peculiar enough that they KICKED HIM OUT OF THE LABORATORY FOR GOOD.

Think about that for a minute.

While you do that, I'm going to get back to our story proper. Appears Heliocanthus is now ready to ask why he is in the Paradise Zone. It appears everyone is subject to hallucinations here of one type or another. Check this one out. It's like a stoner's dream come true. 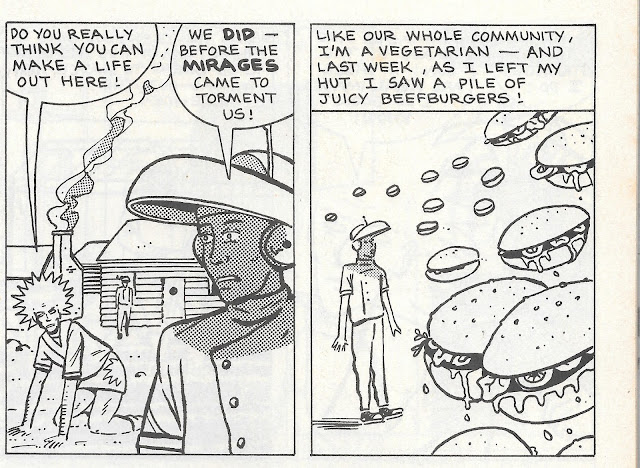 And while Helio thinks about what that can mean, the workers wonder when Helio will start kicking ass like a proper superhero. 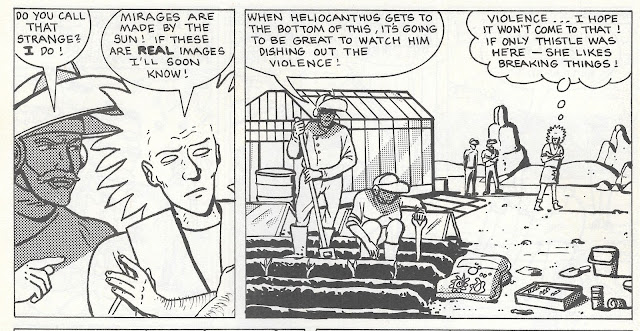 Which is as good a segue into the next character introduction as we are likely to get. She is a girl in the flower of youth called Thistle. 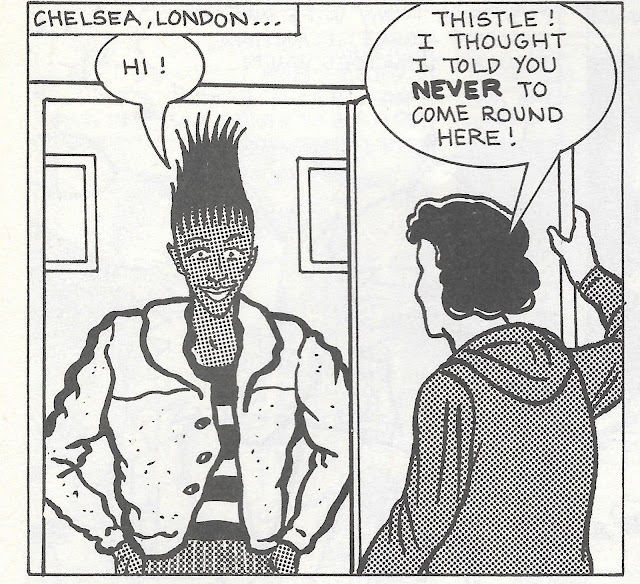 Sorry, strike that. SHE is a youthful flower shaped like a girl. This is her on-again/off-again boyfriend, who doesn't know that Thistle's real genus and species isn't homo sapiens. Boy will he be in for a shock. As for now, he just thinks she's odd. 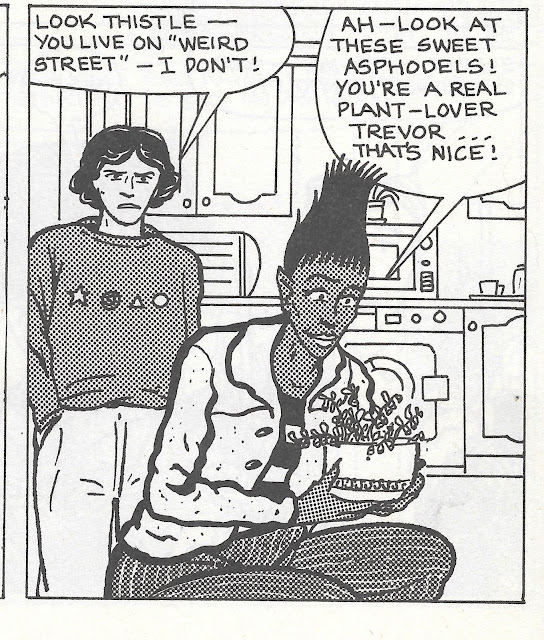 And I think he wants her gone. As in she's kind of unwelcome.

Which doesn't seem to bother Thistle, who continues to act in a fashion that would earn most people a padded room. This guy is a saint for putting up with her. Here she is acting as intermediary for all his house plants.

And when I say all, I mean all. 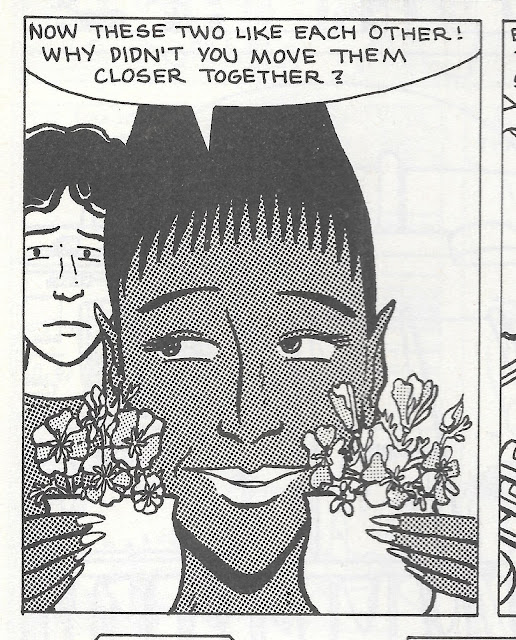 This goes on for so long that I begin to wonder about what these plant people are like…you know…physically? Are they REALLY girls and boys or do they just look masculine / feminie? My question is answered in the most roundabout way. 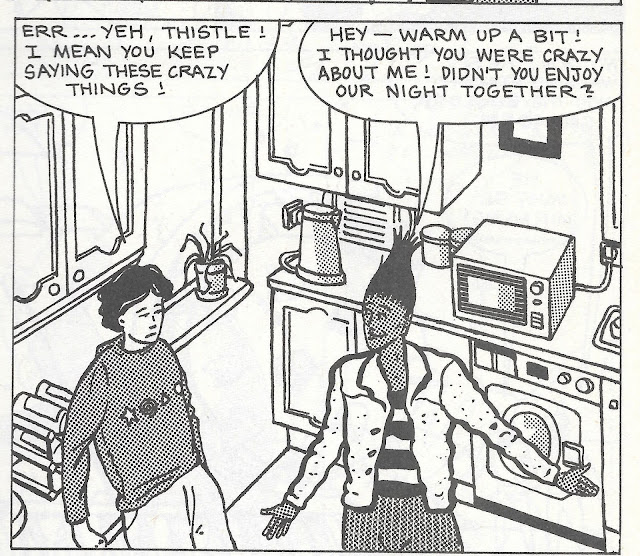 Wait! He slept with her and didn't notice anything amiss? Should I insert a Georgia O'Keeffe painting here?

Oh that is one story I'm scared to ask about but really, really think I deserve to know. Dude made love to a shrubbery. How many times you think you get a chance to hear about something like that.

While all that's going on, Heliocanthus succumbs to a mirage and walks into a threshing machine… Which prompts Dr. Glass to assemble the rest of his team, including these two who are now hanging around outside Thistle's boyfriend's apartment. 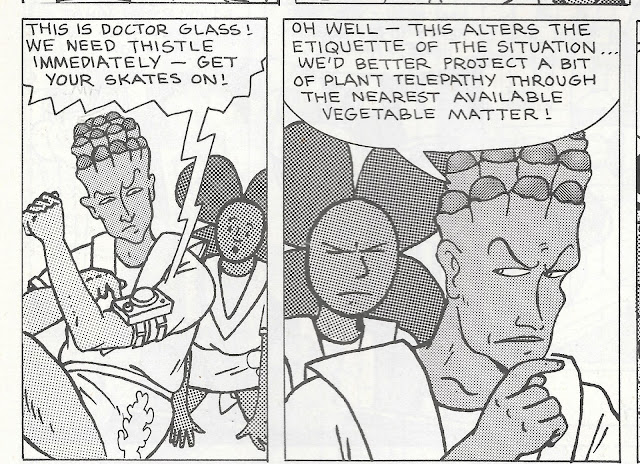 They choose to telepathically send Thistle a message, which sounds kind of normal superheroish… 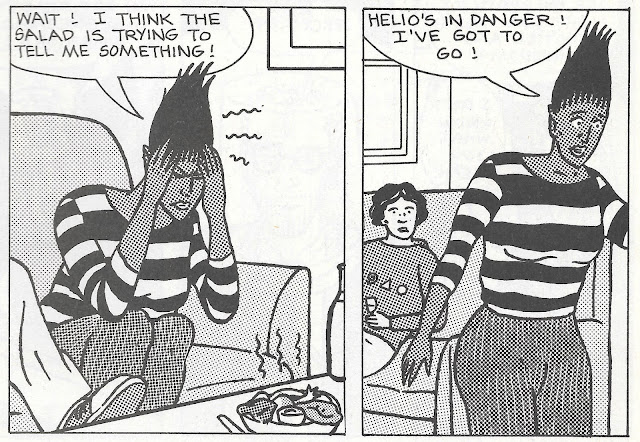 Except it totally isn't. Also HOW does a salad do anything? It is dead plant matter. That's like saying we could communicate through someone's hacked up corpse. At least they could have made it one of the house plants or some such.

Meanwhile Dr. Glass decides to bolster the ranks power by making the cactus into a person. Only I think it is more than a little reluctant to join them. 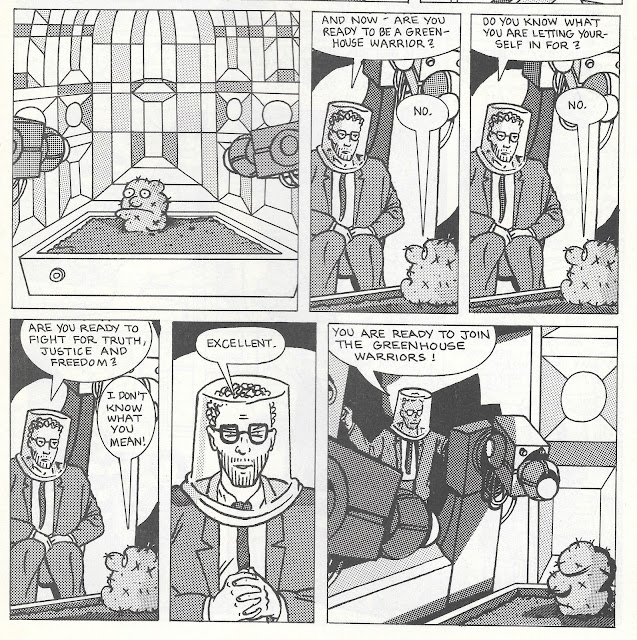 Is there such a thing as plant abuse? Because this feels like that. Against his wishes, Cactus joins the party and off they go. The ending is as clichéd as you'd imagine. There are hallucinogenic plants in the Paradise Zone causing everyone to go crazy, something that first reasearch scientist should have figured out Waaaay before we got to the idea of calling in plant people. Oddly enough even the plant people are affected by them, but two are smart enough to put on breathing filters.

Oh and the guy that got run over by the thresher grows back Groot style.

There you have it. A very different kind of take on a standard superhero tale. I was hoping for and perhaps dreading a little bit that this would have a solid ecological message, but all of that is window-dressing and background. The only part that seems that way is when the two characters play at killing off the human race in their game. I can see why audiences stayed away.

Until next time, beware houseplants with knives.

Big thanks to thegreatcomicbookheroes.blogspot.com for their research on Tundra and the image of a few of their books.
Posted by SonOfCthulhu at 2:59 AM