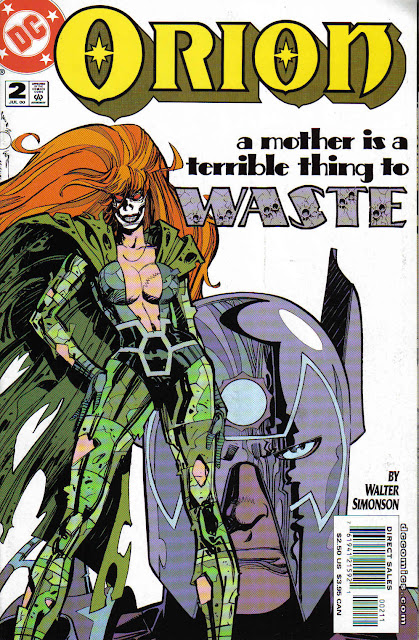 A better theme park ride than any that other Walt built

Walt Simonson continues to build upon the foundations setup in issue 1 and starts setting the stage for a confrontation between Orion and his Father (maybe?), Darkseid. But he leaves that plot thread swinging in the breeze while building up a storyline in sincere homage to Kirby. We start not with Orion, but with these fellas. 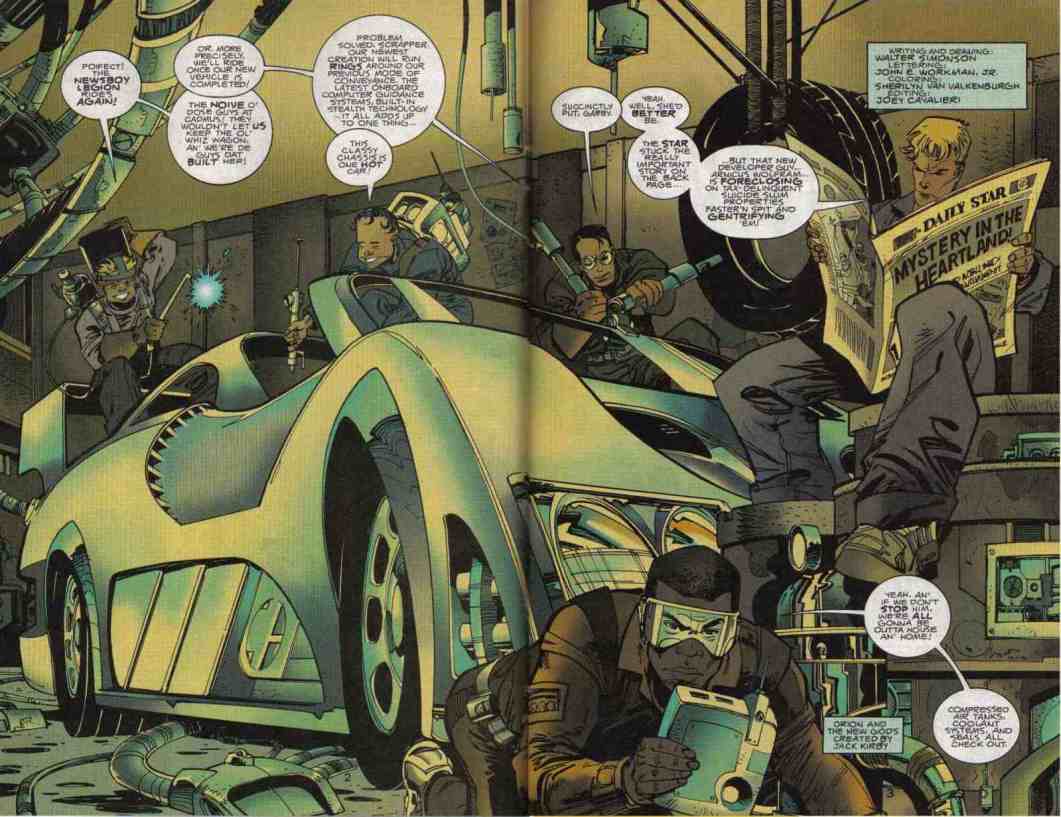 Yes, feast your eyes on that panel, boys and girls. You are looking at the Newsboy (nee Newsperson) Legion working on their brand new Whiz Wagon replacement, the Zipp Drive. No comparing this bad boy to that 8 GB USB fob you carry your files around on, either. We also get to meet the Legion’s new hanger on, the tomboyish-female Famous Bobby. 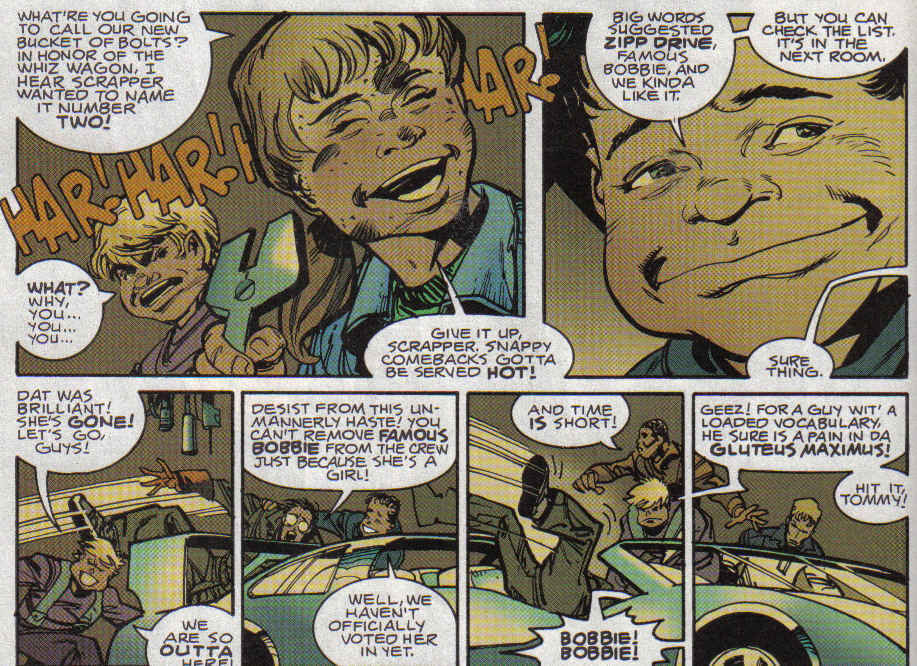 Yeah, the Legion guys are kinda jerks toward the fairer sex. Famous Bobby ends up sneaking aboard off panel before blast off, though. The Newsboys have one other passenger to pickup before their story can get underway, however. Note the distinct lack of bow tie and the unbuttoned shirt collar. This ain’t your Father’s Jimmy Olsen.

Meanwhile Orion comes calling on his own pal Dave Lincoln. Lincoln happens to be in the middle of a discussion with Dan Turpin on the spooky goings-on in Main Line, Nebraska. Turpin clues in Orion about the town locking its boarders with new-fangled weapons and that clues our Godling that Darkseid must be behind it. And while Desaad and Darkseid fortify their position, Orion’s mother Tigra reflects on her lost love in a black-and-white flashback. 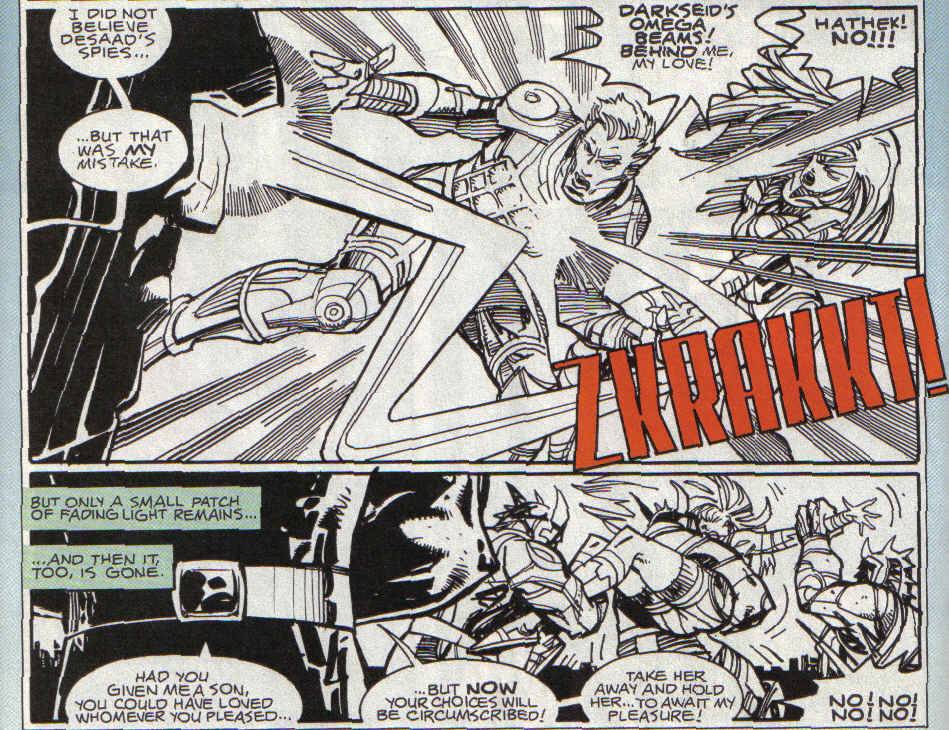 Which leaves a “did he or didn’t he” mystery behind Orion’s parentage. Orion dispatches a few of the town’s folk who challenge him at the county line. His mother box finds that each one of them have had their minds wiped. All thought is replaced by a burning brand in the yokel’s head, and each person’s is different. Orion is now pissed and gets a dramatic pose shot. 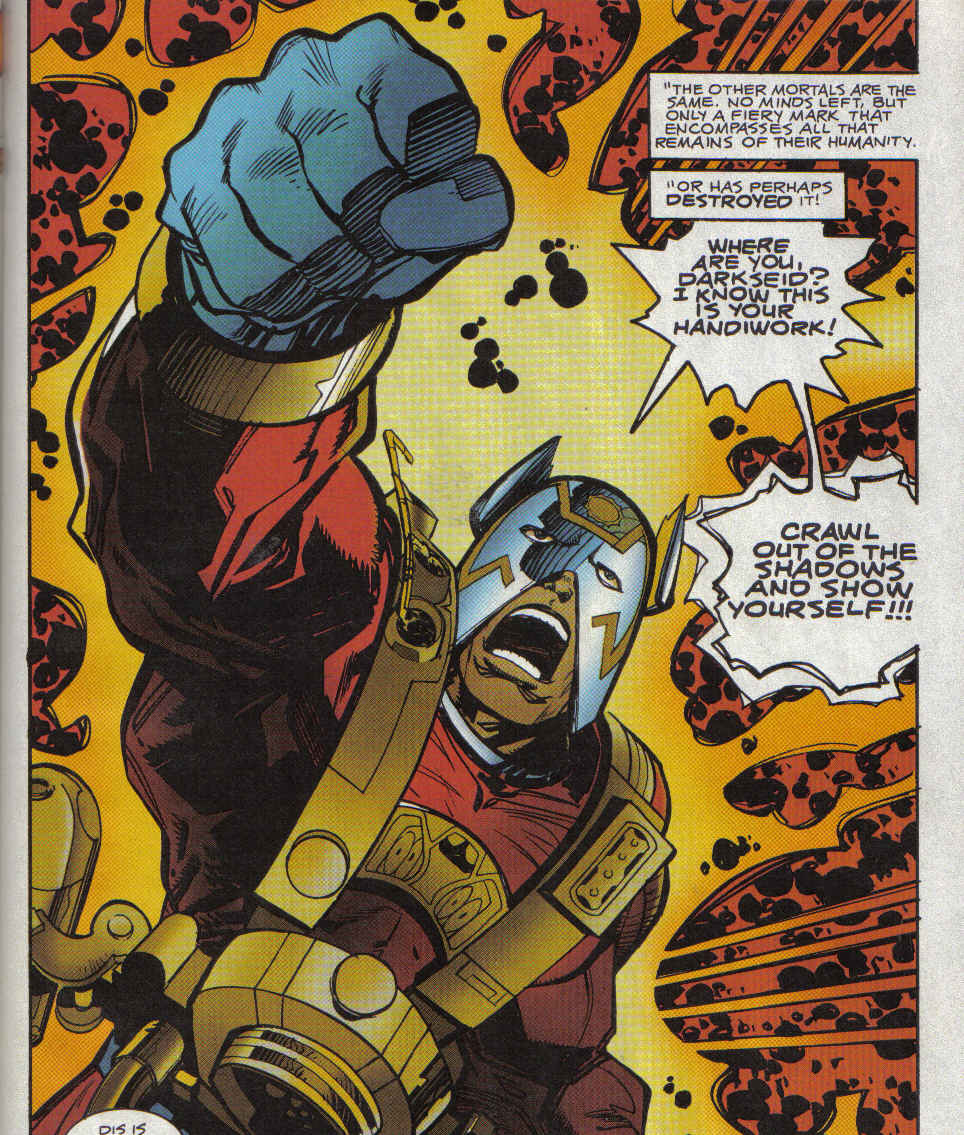 Feel free to change underwear, because I know art this good makes people soil themselves. Look at that panel. Simonson has this great eye for composition and balance, yet we can’t overlook the colorist’s  (Sherilyn Van Valkenburgh) contribution in pulling all it all together. While Orion is vowing, the Newsboy Legion is speeding toward Main Line to do a write-up on the growing story and the Suicide Jockeys finally catch up to Tigra on New Genesis. Just before she finishes summoning a Boom Tube, she’s fatally injured by a jockey’s blast. She stumbles toward the tube, desperate to reach Orion before she dies.
Orion has had a bit of bad luck himself. It appears the villagers have some ability to cause paralysis in the New God and he crashes headlong into their midst. While one of the hayseeds is drawing a bead on Orion’s noggin with a nasty looking Apokolips pop-gun, the cavalry arrives in the form of the Zipp Drive. Sadly they aren’t immune to the paralysis inducing crowd either. 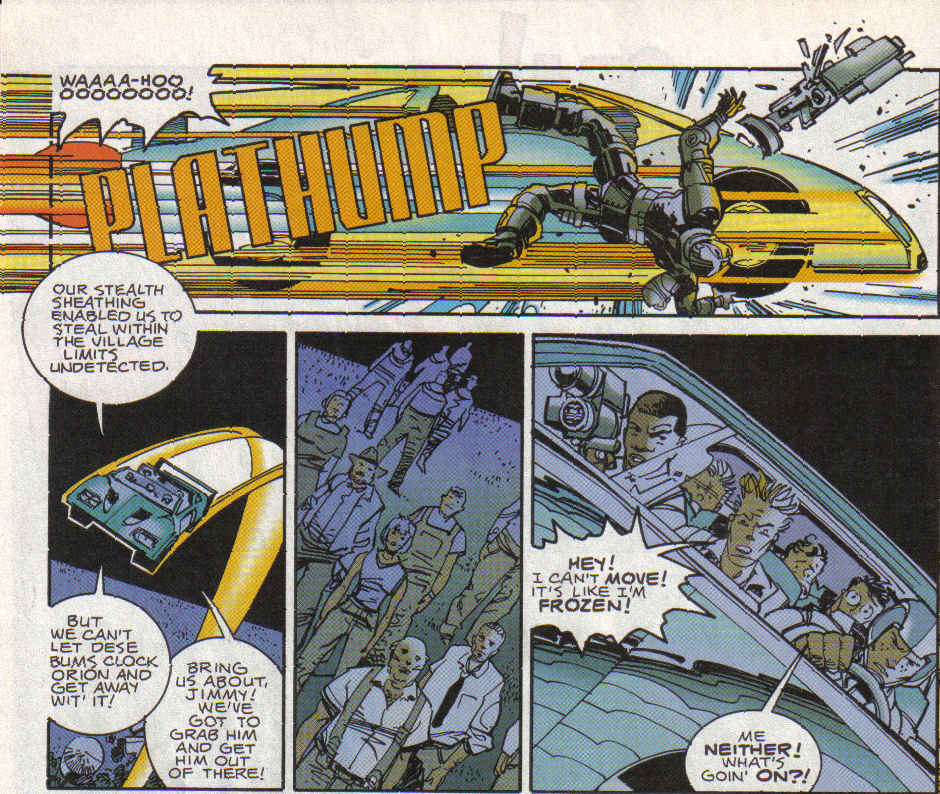 As luck would have it, Tigra’s Boom Tube appears right in front of the Zipp Drive. 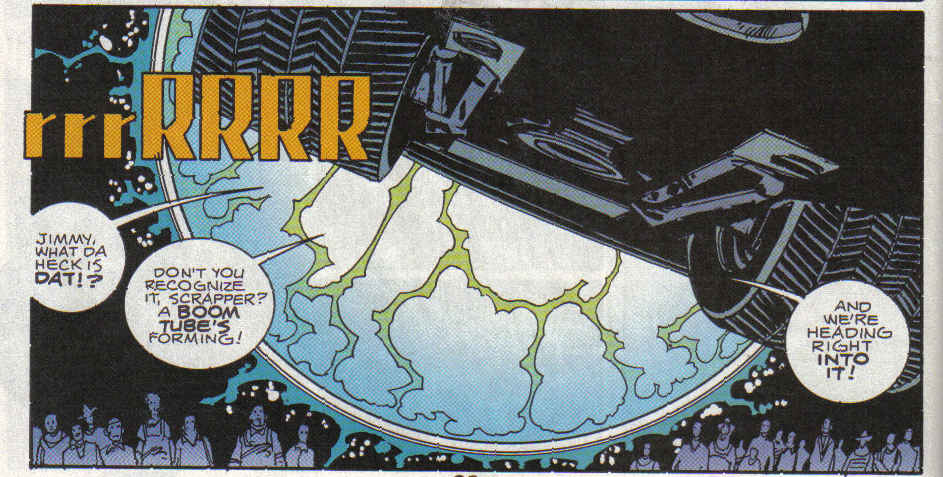 ...and in an instant the tube transports things in opposite directions. 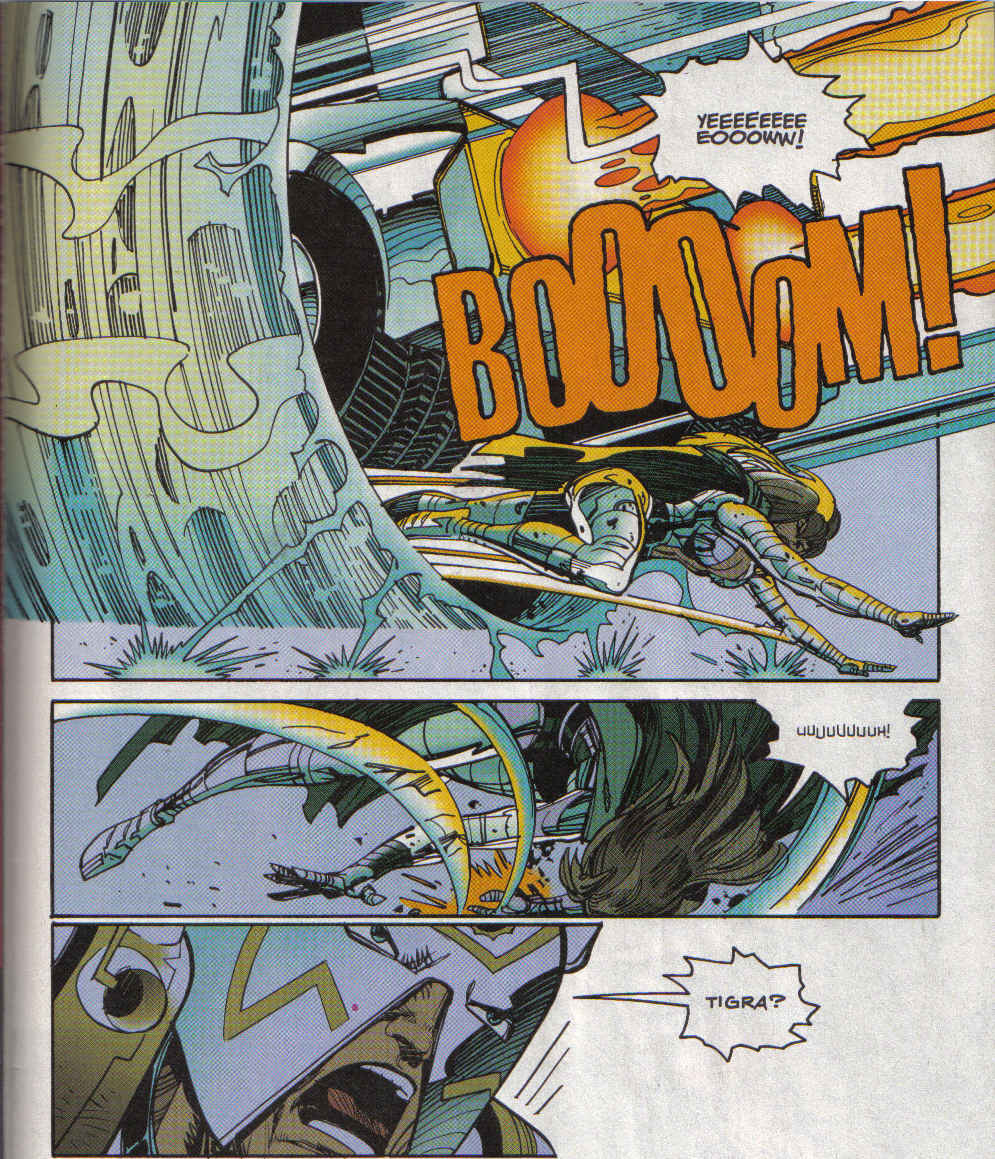 Snazzy! Now we have the Newsboy Legion loose on New Genesis, Tigra dying mere feet from her son’s prone body, and Darkseid waiting in the wings. What is it about those villagers that could give them the kind of power to stop Orion cold? 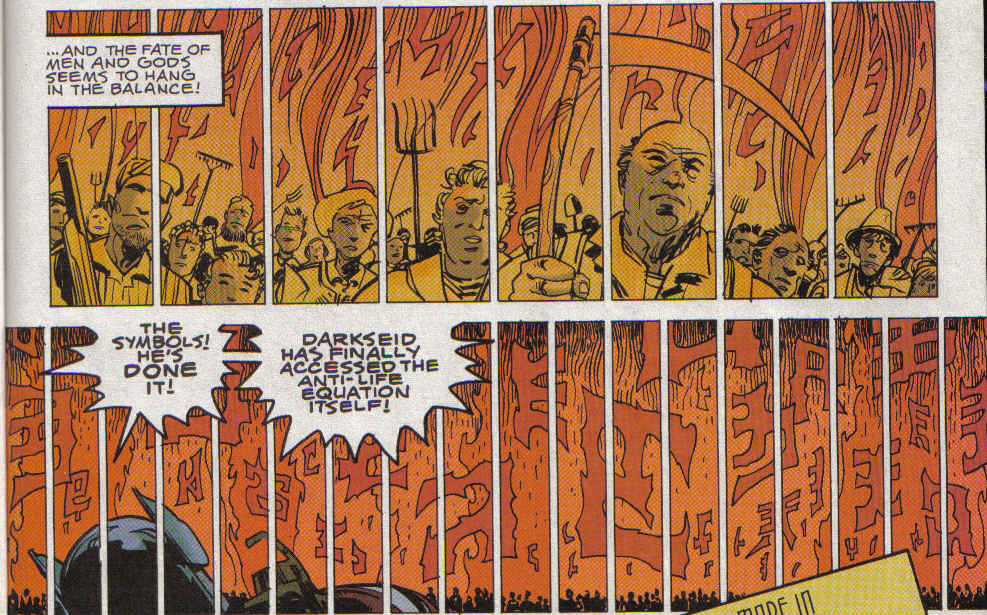 Good lord! Issue three is going to be a stunner.
Posted by SonOfCthulhu at 6:00 PM