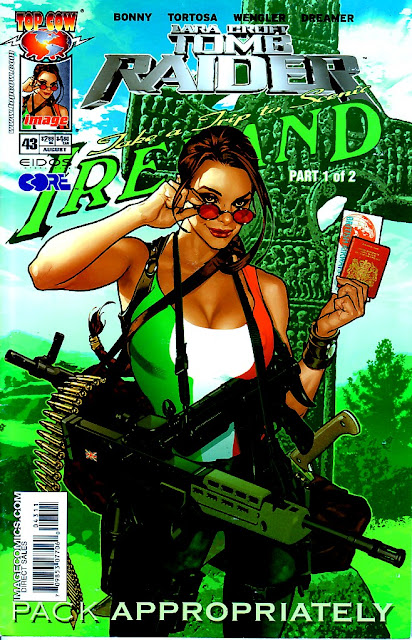 Essentially Indiana Jones with boobs, and I find NOTHING wrong with that

If all goes well at the end of this month Eidos will release Rise of the Tomb Raider on PC, following up its port of the game after the initial exclusive release of the game for the Xbox platform. And hopefully it will make it on to the PS4 too. Even if it doesn't, the company can still celebrate putting the cap on 20 years of the Lara Croft franchise.

Eidos struck gold in 1996 by creating a feminine version of Indiana Jones for their video game Tomb Raider. Lara Croft was designed by Toby Gard for the first game. He would later leave before the release of the follow-up game disappointed because of creative control issues and the way Eidos was marketing Lara’s sex appeal.

Eidos had the right idea, however and have now developed the Croft character into a franchise that includes 21 different video games, a short-lived animated series, novels, action figures, comic books and two big budget feature films starring the yummy Angelina Jolie. In 2006, the Guinness Book of World Records recognized Lara Croft as the “Most Successful Human Videogame Heroine.”

Not bad for a bunch of pixilated boobies.


Looking back on the toy that started all this, the video games are episodic puzzles that take place in a 3-D environment. Lara is rendered in third person with the gamer usually taking an over-the-shoulder view. Lara faces a variety of foes including humans, animals and supernatural entities while exploring ancient ruins and solving paranormal and mystical mysteries. Most of the games are “on a rail” but the ride is interesting, so you don’t notice it too much. There is usually an “end boss” that has to be defeated and most of the time Lara’s task in the game involves saving, if not the world, at least some aspect of it. I’ll admit to having tried these games if you won’t ask how well I did. 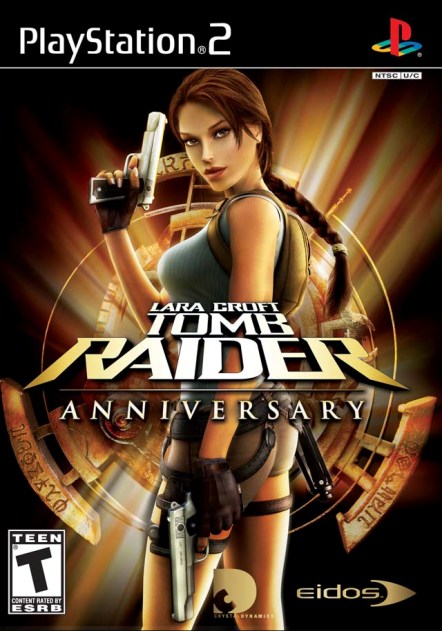 One of the oddest marketing techniques employed by Eidos is the use of live models as “stand-ins” for Lara in magazine spreads. I’m not sure how these ladies are picked exactly (I’m sure it has something to do with looks and modeling ability), but they’ve gone through around one model every two years since the release of the first game. When you take into account all the cosplayers doing takes on the character, there might be several hundred really good doubles for Ms. Croft at any one time. All of them are stunningly beautiful and convey a sense that Lara is grounded in a real, live person

Don't believe me? Check the links below:

And for a hoot, check out Smosh Games youtube: Honest Game Trailer's review of the series go HERE.

Before this turns into a discussion on teenage boys and sexual themes in video games, let’s take a look at how the graphics in Tomb Raider have changed over time. Any woman that has succeeded as long as Lara has is bound to undergo some changes appearance-wise.Check out this site exploring her physical game evolution.

As for fan sites that are full of pretty much everything go HERE, HERE and HERE.

The “Lara Croft Tomb Raider” comic book debuted in 1999 and went on for 50 issues and several one shots. The series ended in 2004, but during the run Lara got to crossover with other Top Cow books like Witchblade, Fathom and The Darkness.

The issue I found floating at the bottom of the quarter bin was written near the end of the comic’s life. It reads like an episode of Scooby Doo. And not one with a cool monster in it, either. I’m not certain if the writers had run out of plot ideas by this point or if the entire series was like this one issue.


We begin with Lara arriving at a pub in County Offaly, Ireland, in the company of “warrior poet” and big wussy coward Byron Owen. It’s a dark and stormy night. *cue lightening* Lara’s there seeking the magical Dolmen Emerald which is hidden somewhere inside the decrepit, abandoned and reputedly haunted Lotte Castle. *cue second splash of dramatic lightening*. 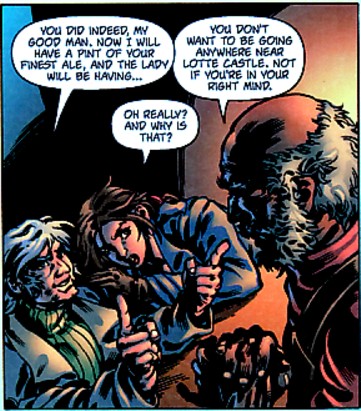 Because it’s haunted, a place of pure evil, has REALLY bad indoor plumbing, yadda, yadda, yadda… It’s about this time in Scooby Doo cartoons where the villain of the piece makes a spectacular entrance looking all evil so we can then be relived it’s only a normal guy. Then later we learn this was actually foreshadowing showing that the normal guy was actually the ghost, space mummy, ghoul, and/or bad person. 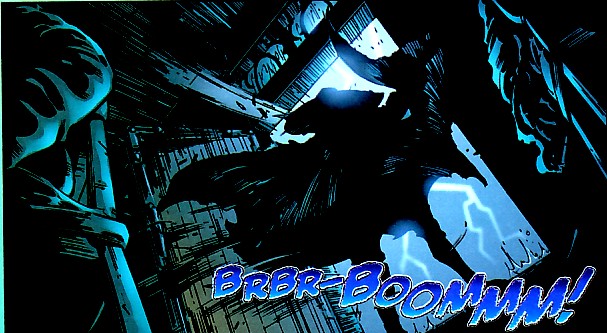 Nice. Meet Dunleavy, the caretaker of Lotte Castle. He’s sort of an old hippie with bad teeth and a cataract eye. He’s going to lead Lara and wimpy boy back to the castle but first he wants to play 20 questions.

He espouses the history of Lotte Castle. Seems in the sixteenth century two brothers of the O’Connor family fought over leading their clan. One of the brothers, a priest, was slain by his evil sibling Ian while praying at the altar inside the castle. Ian then proceeds to torture any opposing clansmen in the Castle dungeon. Usually by making them watch Ishtar or Madonna’s Swept Away. Once Ian died, an evil entity known as the Elemental took up residence in the castle making the place a real estate agent’s worst nightmare.


Lara is unimpressed by all this, because she knows that she’s slated for the Tomb Raider VIII video game and there’s no way Eidos would kill her off now. So off to the castle the trek, following Dunleavy who is looking more and more suspicious. They hear a cry in the night that girly-man Byron thinks is the wail of a banshee, meaning someone will die tonight. Lara pokes fun at him and then asks a very Scooby-ish question of their guide. 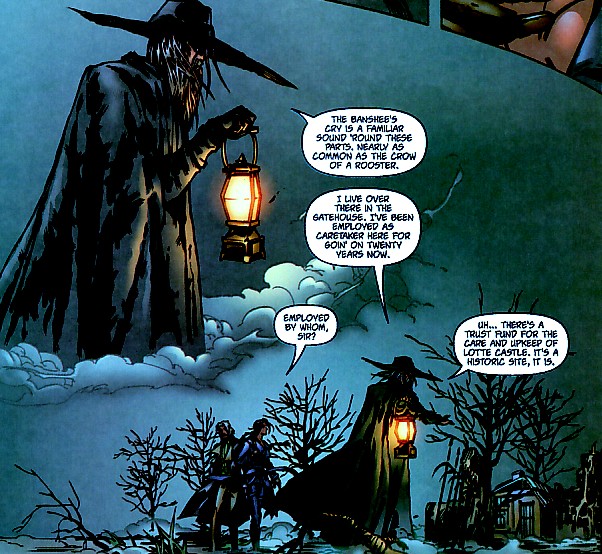 Uh…yeah we believe that “trust fund” story in a heartbeat, buddy. You should be wearing a big sign that says “I’m the bad guy”. It would save a bunch of pages, ink and maybe some staples. I don’t buy the trust fund story for a minute. Even if I did, who would pay a guy with a work ethic like this to take care of the castle? 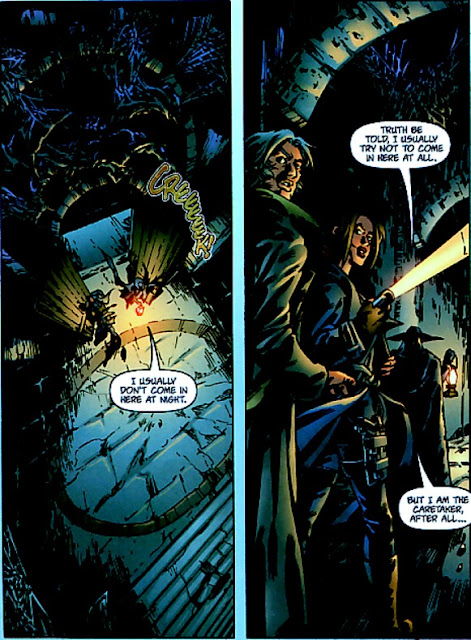 As Dunleavy leads the pair further into the recesses of the castle, Lara confides in pee-pants Byron that she is really seeking the Dolmen Emerald because she believes it’s cursed. He is skeptical and questions why she would want it. Lara coolly replies that she is trying to keep it out of the hands of evil men. It’s about this point that Dunleavy lets out a scream from around the corner and disappears. Lara takes off after him leaving Byron to stand still and wet himself. While Byron contemplates never leaving the house without Depends on, Lara finds the very first clue. Scooby snack for Ms Croft. 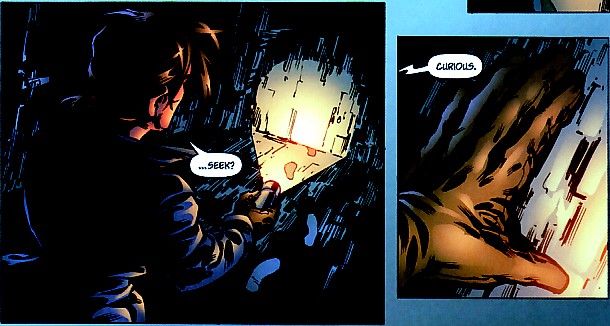 Showing his true chicken feathers, Byron high-tails it back to the front door which is inconveniently locked shut. At least he doesn’t lose his cool. 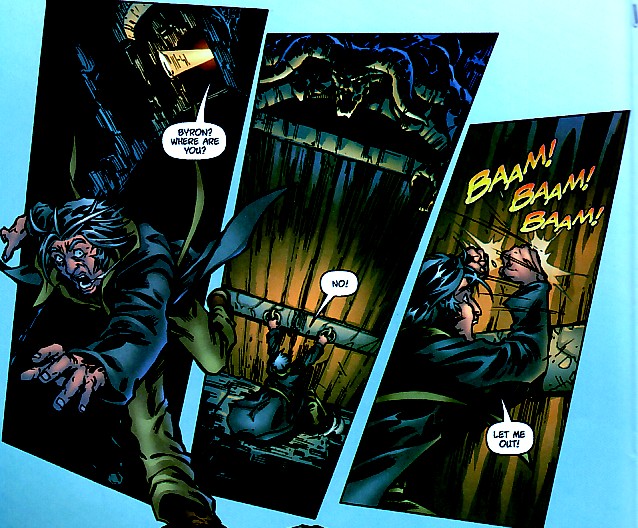 One spooky story is all it has taken to reduce him to a bowl of jello. Not only that, but he is completely oblivious to what real dangers lurk in old castles. Take for instance that crumbling piece of statuary poised ever so precariously above the entranceway. You know, the one that makes creakly, crackly noises whenever he pounds on the door. And sort of sways a bit like it is not balanced so well. 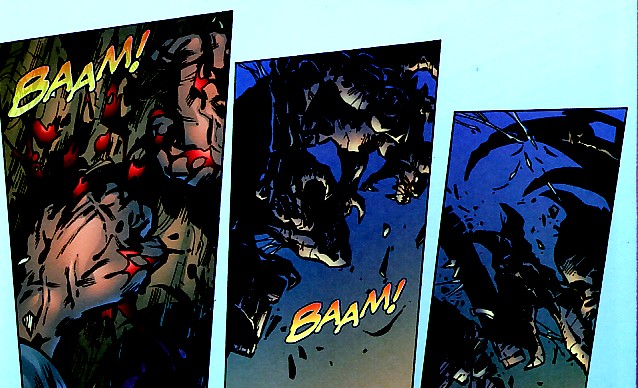 Yeah, that one. Looks like Byron sees it now as well.

With that Byron makes his exit from the castle, if not this life as well. Sadly the book decides it’s necessary to show his grisly remains instead of just a reaction shot from Lara. Yuck, a bit too much like Shadow Reavers for my taste.

Lara figures out that the doors are locked without causing huge a stone gargoyle to fall on her noggin. Then she proceeds to wander about the castle encountering glowing spirits of everyone from that little girl in the Silent Hill video game… 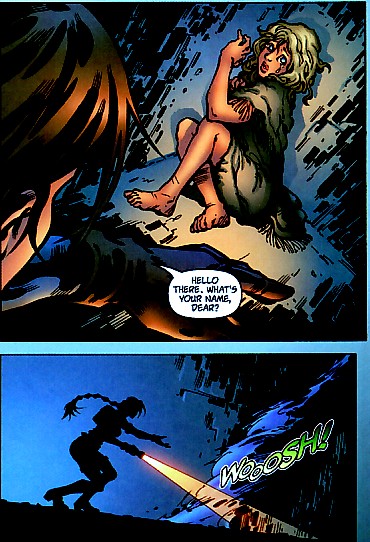 …to Ian’s ghostly brother, who strangely bleeds blood that she can see even after he disappears. In a scene that seems right out of the video game, she gets knocked into pit full of huge spikes and has to avoid them all. If I was at the controls she would have been a shi-ker-bob. Lara lucks out and continues on through the castle until she meets up with a ghost who looks very familiar. 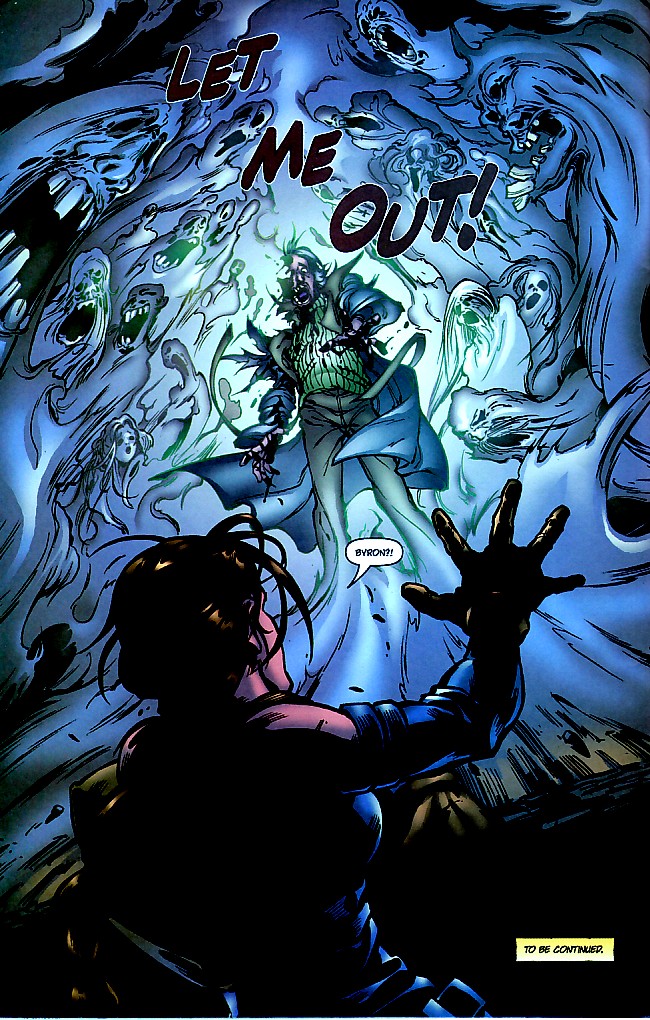 I have to say that for a full-sized issue, this book seems very light on story. There is a seven page preview in the back for something called Proximity Effect, but it takes the place of several ads, so the Croft story page count is still that of a normal issue. Yet there is an odd sense that too much of this issue is fluff. The art is well done, and it makes a pretty good read albeit the aforementioned predictability. Maybe it is that there’s no way to attach a game controller to the book and make the action a bit more involving. I’m sure Lara’s fan base feels differently.

I'm heading home from the arcade now. Look for more Kid's Stuff: VIDEO GAMES later on this year. On that note, happy playing everyone!

Posted by SonOfCthulhu at 4:28 AM