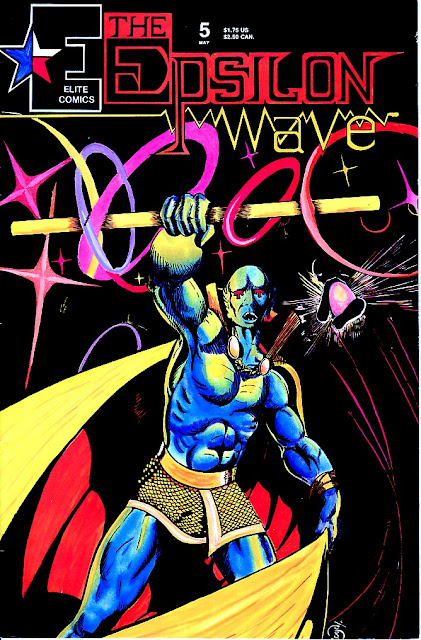 Your eyes will be bleeding too, after you read The Epsilon Wave

Midland, Texas (population 102,073) sits about halfway between El Paso and the DFW metroplex. Nicknamed “The Tall City”, Midland is the county seat of Midland County, the birthplace of Former First Lady Laura Bush and the childhood home of Former President George W. Bush. If only those were the sum total of horrors to escape this quiet Texas town. Unfortunately it was also the birthplace of Elite Comics.

During the nutty late-80’s, independents were springing up all over the place trying to find that TMNT pot’o gold. Elite Comics got its start in 1985. It is rumored that they turned a small house into their publishing studio and started cranking out books. I’ve found information on four different series they produced between inception and ruin: a one-shot Elite Presents, two issues of The Twilight Avenger and eight issues apiece for both Seadragon  and The Epsilon Wave.

What I found creeping around the bottom of the quarter bin is the fifth issue of The Epsilon Wave, possibly their first series. The book is a mixture of old-fashioned superheroing with an undercurrent of supernatural themes. Our protagonist is Dr Richard Allen Trent, who leads a double life as the costumed adventurer Lone Star. As we say in Texas, here he is buck naked. 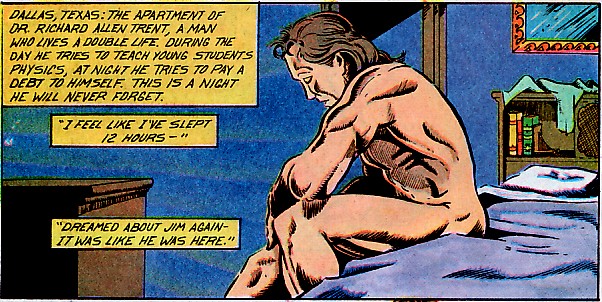 Story and art work are both the responsibility of creator Tom Floyd. I’m going to risk a surprise visit from Mr Floyd by saying that I don’t really like his contributions on either. The art doesn’t reach “Rabid Rachel” level of horrendousness, but it’s amateurish in most panels. Even by 1980’s less rigorous standards of measure. Take that first picture. Richard’s body is rendered fairly well except for his facial features are as flat as a board. The verbiage is awkward as well. I have no idea how someone “pays a debt to himself”. I know how you can be indebted to others for things but being indebted to yourself is a crazy concept I can’t wrap my head around. I bought myself my favorite type of food (Chinese) yesterday at lunch and now I really owe myself for being so thoughtful to me. Later I’m really going to do something to pay myself back, maybe masturbate for an hour. That ought to win me some points with me. 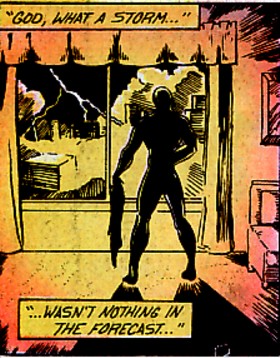 “Wasn’t nothing in the forecast…” Nice. All of us Texans use double-negatives in our speech patterns. And pronounce words like “oil” as “all” and “fire” as “far”. He keeps up like this and non-Texan’s might need a phrasebook guide or interpreter.

I do have to agree that weather in Texas changes every 15 minutes or so. This really shouldn’t surprise our main character. His musings and the television’s report of strange blackouts, localized rough weather and something odd at Texas Stadium is interrupted by a knock at the door. The actual verbiage before the panel reads:

Trent touches the doorknob in answer to his visitor, but a deadly chill races through his nerves. He hesitates for a split second, not knowing why. He braces himself and opens the door into – 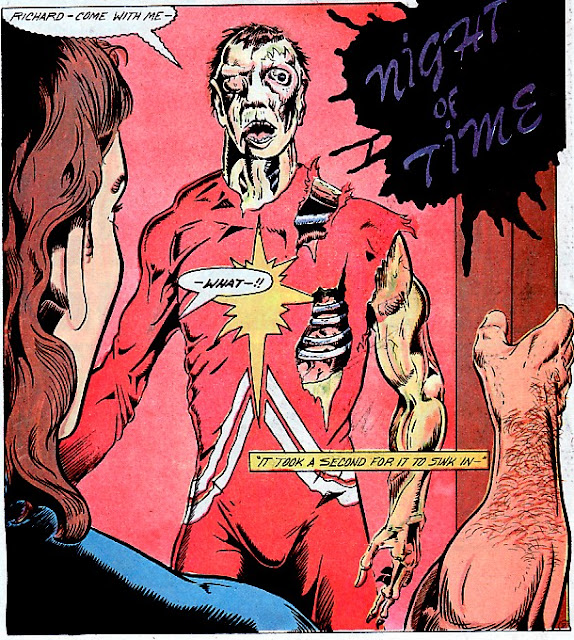 That’s the title of the story. Night of Time. Not “Nighttime” mind you. Not even “Time of Night”, which would make sense. But “Night of Time”. Yes, these are the guys I want representing my home state when it comes to making comic books.

Oh, and there’s a dead guy at the door.

He’s the reanimated corpse of Shooting Star, a hero that Lone Star must have hung with. There’s a very likely chance that Lone Star was responsible for his being dead somehow too. And that it links in with his “debt to himself”. Not having prior issues and with the skimpy background work being included by Tom “Night of Time” Floyd, it’s very difficult to tell.

Lone Star has a strict “no undead in the house” policy and slams the door on Shooting Star. The zombie breaks through and menaces our hero, who has a problem working the secret panel that stores his hero gear. Gear that includes some very odd throwing stars. Finally just busting the panel up, Lone Star gives Living Dead guy an ultimatum. 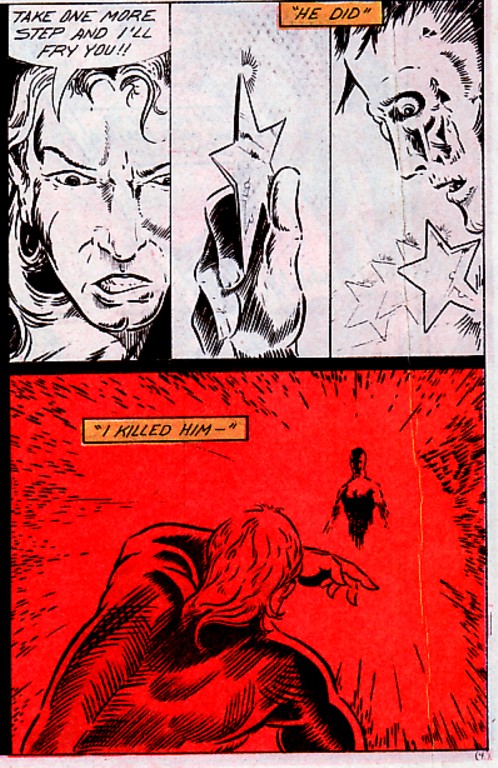 Those ellipses lead to the next page where Lone Star admits to having killed him “again”. He suits up to try and figure out what’s going on. 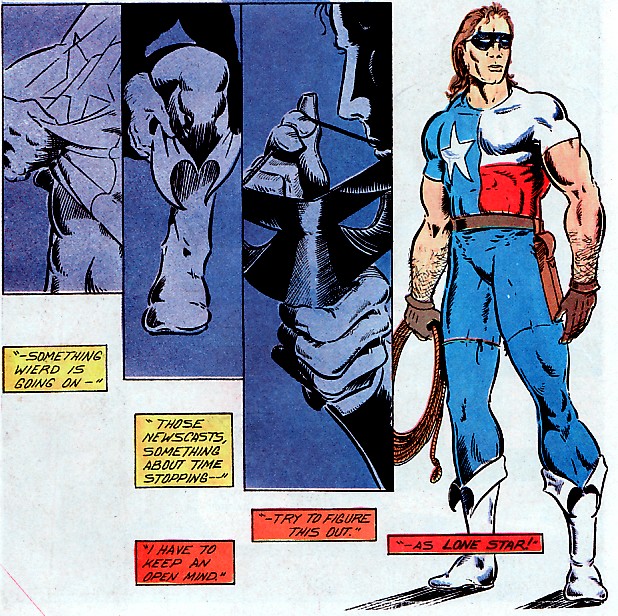 Sort of like Captain America crossed with a rodeo. Maybe even a gay rodeo. Something’s still up with Floyd’s face-drawing skills. People’s mugs look a bit unfinished and misshapen. This shows even more when we go to another person’s house to witness the upcoming zombie holocaust. 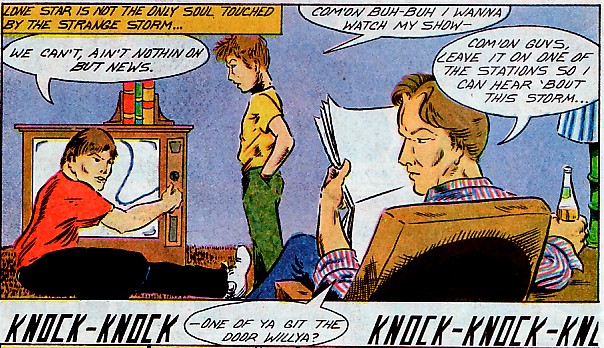 Here are three potato-heads saying things like “git the door”. Ok, I’ll admit to using git occasionally. It’s still not an excuse for the poor art, however. Seriously, there’s mutant Morlocks in Marvel’s X-titles that look more human than these yokels. The knock at the door is the boy’s recently deceased mom, who comes in and murders them all.
Meanwhile, a female angel called Twilight and a feminine shape-shifter named Myriad are discussing the location of Twilight’s mortal host Arthur Williams when they are set upon by legions of the undead forcing Myriad to turn into something from the “My Little Pony” line. You can’t make stuff like this up folks. Or actually you can, it’s just most of us wouldn’t. 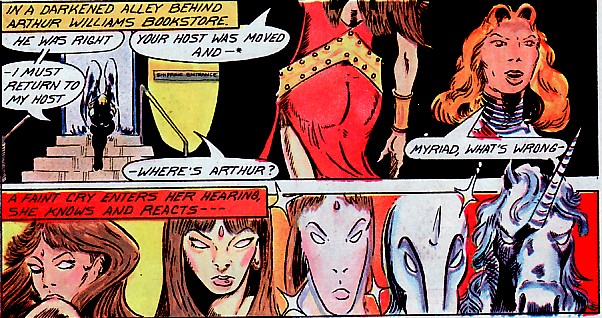 Stories like these tend to burst right through that “suspension of disbelief” wall at some point. Supernatural weather – Ok. Army of undead – um, ok. Superhuman with exploding throwing stars – yeah, ok. Winged angel female and fellow shapeshifter – wait, what? Exploding Texas Stadium – no way! We’re not quite to that point yet, but don’t worry we’ll get there. First Lone Star has to show up and run over the zombies chasing these two. 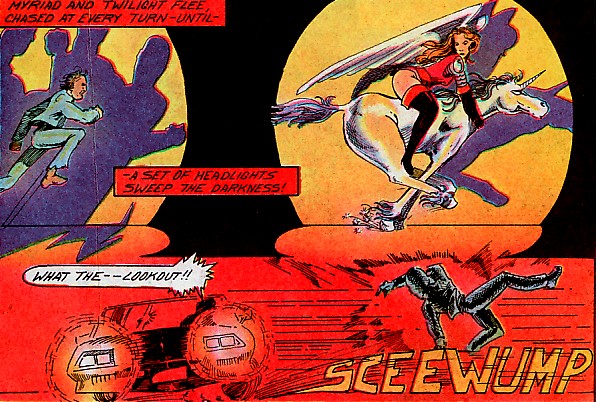 And might I say that Lone Star is looking particularly dashing tonight with his misshapen cranium. 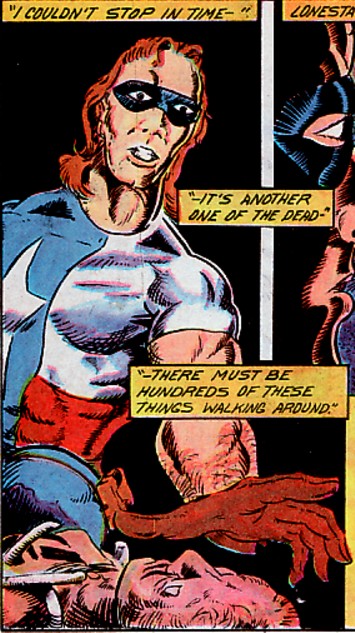 The girls explain about their missing friend Arthur and another lady by the name of Jennifer Collins. Lone Star makes a few calls and finds out that Collins is in a coma at the local hospital. While they rush to the hospital, things don’t look good for the Dallas Cowboys. 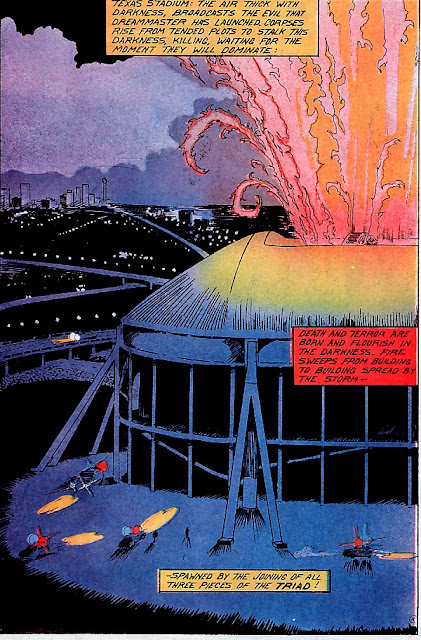 Who am I kidding? Things haven’t looked good for the Cowboys since Jimmy Johnson left. Plus Jerry Jones was just looking for an excuse to build a bigger stadium anyway. Magical superpowered explosions at Texas Stadium are probably covered under his insurance policy. And it’s not like he’s there or anything. Sadly the demon guy causing all these sparkles talks more than Deion Sanders and makes even less sense. If that’s possible. 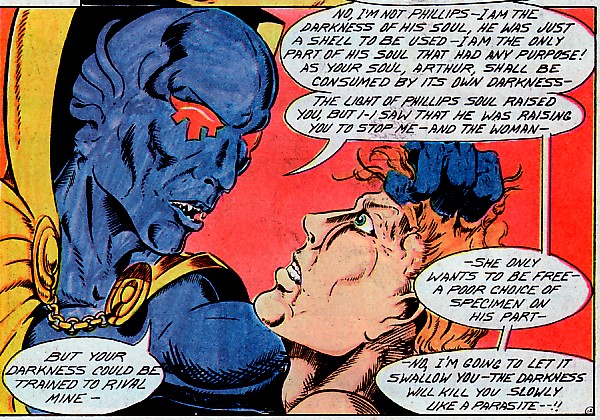 So far, all of this confusion I feel reading lines like this and the exploding throwing star bit above could have been cleared up with a little additional verbiage. Either on the part of blue demon guy here or through the use of some well placed narrative. Whatever is going on, this dude is definitely the bad guy and he’s got Arthur, who the chicks and Lone Star are looking for. He’s also got three artifacts of power and he uses them to summon Ninnikgi, a demoness who apparently has only one leg with no knee. 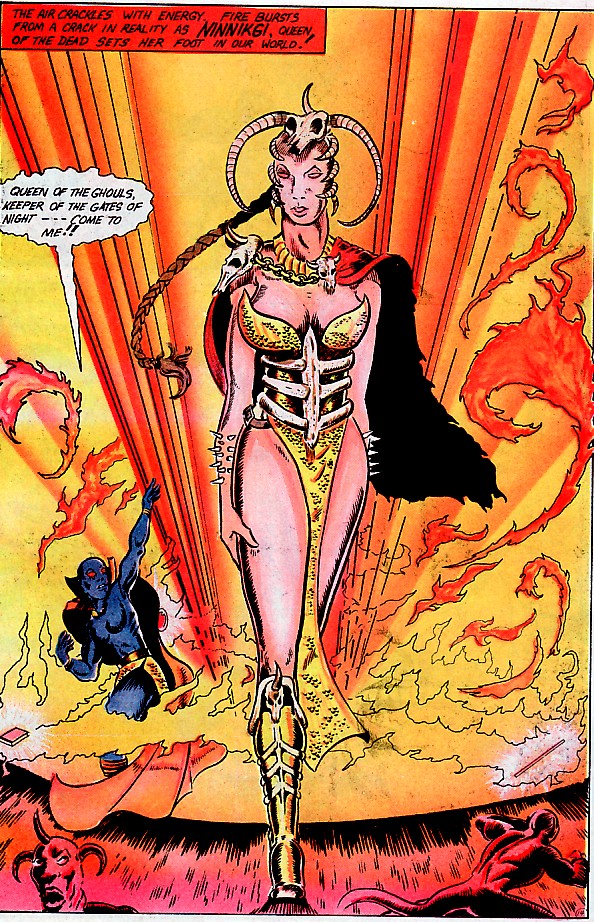 The spikes through the forearm are a nice touch. The blue dude starts calling himself Dreammaster and continues to prattle on about how he’s going to destroy the world and then rule it. To paraphrase Sting: What good is a used-up world and how could it be worth having? Anyhoo, where are our heroes? Lone Star has stolen some drugs necessary for what the group is going to do next, while Twilight is at the hospital stealing Jenifer’s life essence. Remember these are the “good” guys. The team regroups and Lone Star asks the question on everyone’s mind. 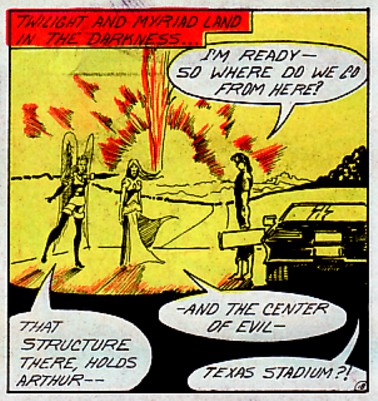 So Jerry Jones is at the stadium! They rush to it in a flash and Twilight flies Lone Star up to the roof so they can save their friend Arthur. By shooting him. 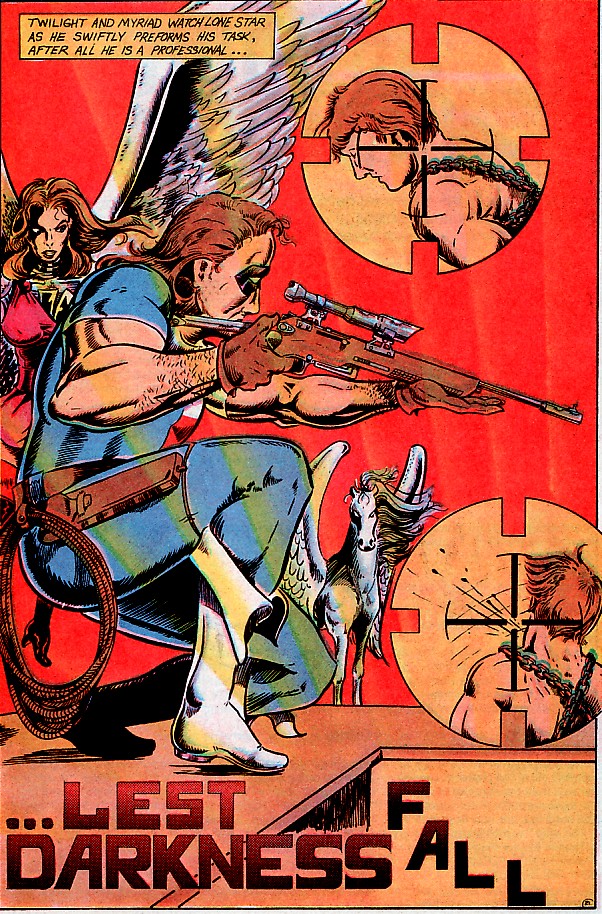 It’s miraculous that this book lasted eight issues. That beats my hypothesis about there being a kind of magic number around issue 4 beyond which failing books can’t venture. Or it might show that these Texas boys were just better funded/more willing to sacrifice to make it big in comics. I’m seeing a lot of beans and rice in their diet while they churned out three monthly titles. Let’s just hope that they won’t put that same degree of perseverance into finding one sarcastic reviewer who happens to live just up I-20 from them.

However, if they do drop by, I hope they bring issues of their other series.

Posted by SonOfCthulhu at 6:53 PM