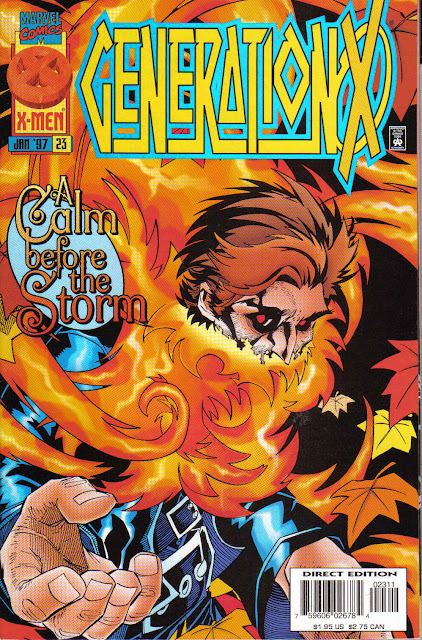 If they wanted more sales, someone should have told them that the “X” needs to come first

Marvel decided in 1983 to produce a series about young mutants in training to be X-Men. The series would feature mutants we hadn’t heard of yet and would allow the company to build off the success of it’s X-Men franchise. The “New Mutants” series lasted until 1991 when it was retitled “X-Force” (notice that “X”). The series sputtered in the mid-90’s, by which time the original team members had either been killed off or absorbed into other book's teams.

Sometime in 1994, before the demise of the first version of X-Force, writer Scott Lobdell and artist Chris Bachalo were tapped to write a new “new mutant” team book that was to be created out of the mutant book crossover event the Phalanx Covenant. Lobdell managed to create a team of young mutants that didn’t quite fit the model of what had come before. His group of adolescents played against the stereotypes of the day. I completely missed them when they came out, so the inclusion of a large run in the crapbox is actually a blessing. In addition to the story, Bachalo’s art is really impressive. Sadly after Lobdell and Bachalo left the book in 1997, the book’s sales nosedived and it was cancelled in 1991.

Having said all that positive stuff, I can now get down to making fun of the book. Yes, I think it’s really well plotted and written. Yes, the characters, as odd and screwy as their powers might be (Chamber? Skin? Husk?), are fun to read about. Yes, the level of detail in panels is impressive and Bachalo’s art knows how to flirt with Anime/Keen-kid eyes without overstepping. But I’m still going to make fun of it. Where would the fun be in playing it straight?

We start issue 23 at a resting point for the team and their trainers, Sean Cassidy a/k/a Banshee and Emma Frost. Note that it’s almost Thanksgiving, meaning it's Fall. 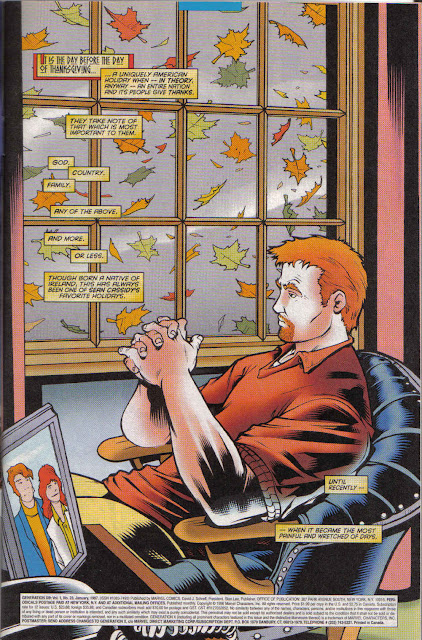 So very much Fall 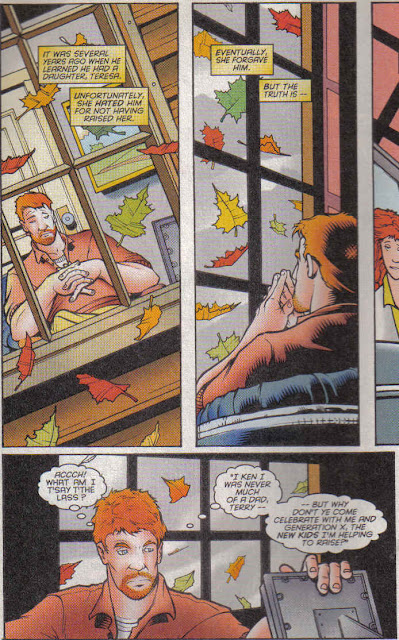 Damn! How many leaves are on that tree?

Sheesh! The lawn is covered in piles of dry leaves. Isn’t that some kind of fire hazard?

Note that at no time does anyone attempt to rake these leaves. Just like I thought, mutants make lousy neighbors. If it isn’t the super villain attacks every other week, they also don’t take care of the yard. Bet they put the trash bags out at the street two days before pickup day too.

Banshee’s about to have a problem with one of the students, a girl by the name of “M” who has a blend of powers from Superman (strength/flight) and Jean Grey (telepath), yet has a background more mysterious than Wolverine’s. All will be just fine by issues end, except AAA cancels the school’s membership.

Meanwhile, the mutants Jonothan Starsmore (Chamber) and Paige Guthrie (Husk) are visiting Paige’s parent's house for the holiday. Jon is one of those characters that make you really see the flip side of the mutant coin. He is an energy projector, but his power has blown up his all of his lower jaw and chest. Sure he doesn’t need to eat, drink or even breathe, but he can’t talk, taste and he has this nasty hole in his body where his chest, neck and mouth used to be. Paige on the other hand has the power to shed her skin revealing a different substance each time. I have no clue how that’s even a useful power, yet for the most part she looks normal. You can see from these two how the characters in Gen X reflect a different balance than in the X-Men or New Mutants. 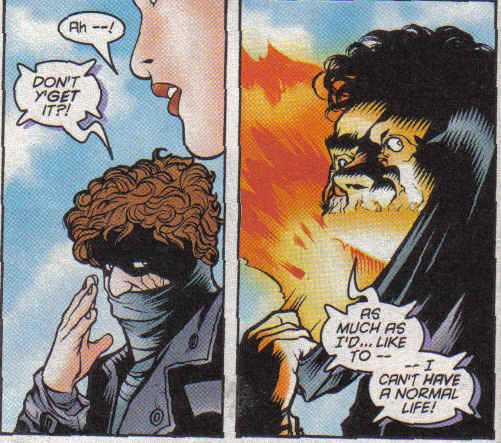 Chamber and Husk have a few pages of emo-ness, yet in the end it doesn’t seem forced. Banshee resolves the problems with “M” and we end the issue without any battles at all. Emma gets a page. Howard the Duck (cool) and Artie & Leech find the Rigellian Tana Nile and burn two more pages in setting up future plotlines. Still it’s a strong issue and a good read. I’m looking forward to the 10 or so that reside in the crapbox. More so than the 45 Image titles that are floating around in there.
Posted by SonOfCthulhu at 3:20 AM