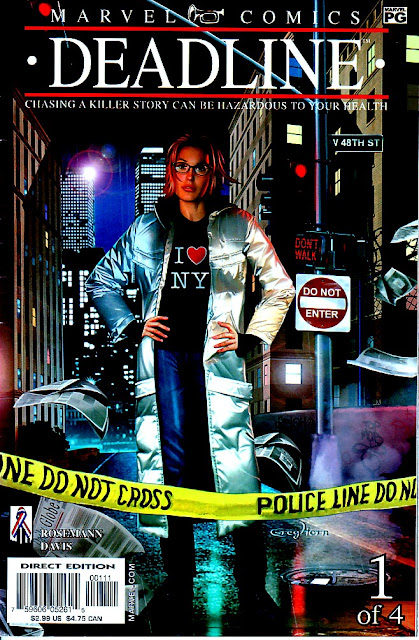 Deadline is an odd duck. It is set in the Marvel Universe, yet focuses not on a superhero but on a reporter who covers superheroes. Reporters had taken prominent roles in books past but not often to the point of being the focal point of the entire story. Marvels did it to good effect years ago, and years after Deadline’s four issues wrapped up, Marvel would use this same type of story perspective in their Frontline to Civil War series. Deadline even gets a spinoff book after it wraps up called “The Pulse” but the star of that magazine is the decidedly superpowered Jessica Jones.

The star of Deadline is the intrepid cub reporter Kat Farrell, who has been assigned the superhero beat. Kat’s a creation of writer Bill Rosemann and artist Guy Davis. They define her as one of those punky nerdy-type chicks with bright red dye-colored hair. She’s fond of t-shirts and work pants which gives off the odd impression that she might be batting for the other team. Oddly I find myself aroused by all this tomboyish-ness, mainly I think because I find nerdy-punk chicks to be kind of hot.

As for Kat’s personality, she’s smart, sassy and an able reporter. If she has one flaw, it’s an avowed smoldering hatred of superheroes. She even derides them by referring to them as “capes”. Her actions in most cases toward them are borderline harassment. We begin the issue with her laying into Johnny Storm a/k/a the Human Torch. 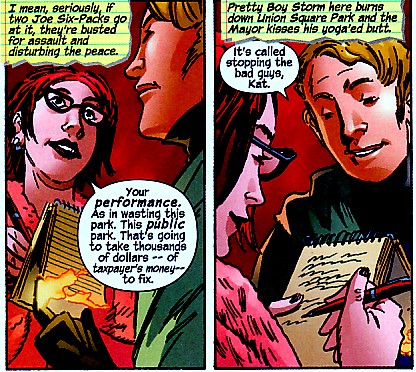 Yes, Johnny burned up a hunk of Union Square Park. However unlike about 99.9% of the Marvel Universe, Kat can’t look at the bigger picture that probably involves some supervillain threat that would have ended in fatalities to more that just a few shrubs and trees. She’s intent on whether Johnny was hung over.

From page two on, it’s easy to fall for Kat. That attitude is full of pluck and she is correct that superheroes may need a bit of oversight. Although they’ve got a right to decompress too. A high risk job like saving lives at the potential cost of your own means that they should have the same right as anybody to relax and let their hair down. Even if that hair is altered by cosmic radiation.
It’s a very different take on Torch too. I like the neat little touches the artist adds to Kat’s expression and hair. I also like the notebook on fire thing, specifically because it leads up to this: 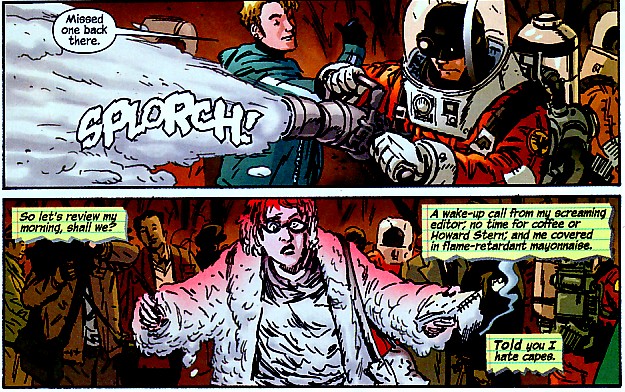 I guess she was kind of asking for it. So we change scenes back to Kat’s apartment where we find her doting pet goldfish named Bilbo, sarcastically listening to her Mother’s voicemail messages, trying to stay off cigarettes and engaging in a hot, steamy shower scene. 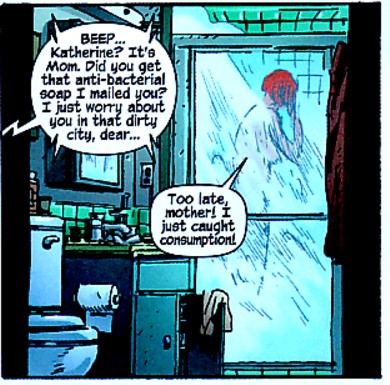 Of course they don’t show anything! What do you think this is? The MAX comic line? Kat decides to get out of the apartment and away from her Mom’s neverending voicemails. This leads her to her work offices, the ever popular Daily Bugle. Is it just me, or shouldn’t there be a competing paper in the whole of New York? 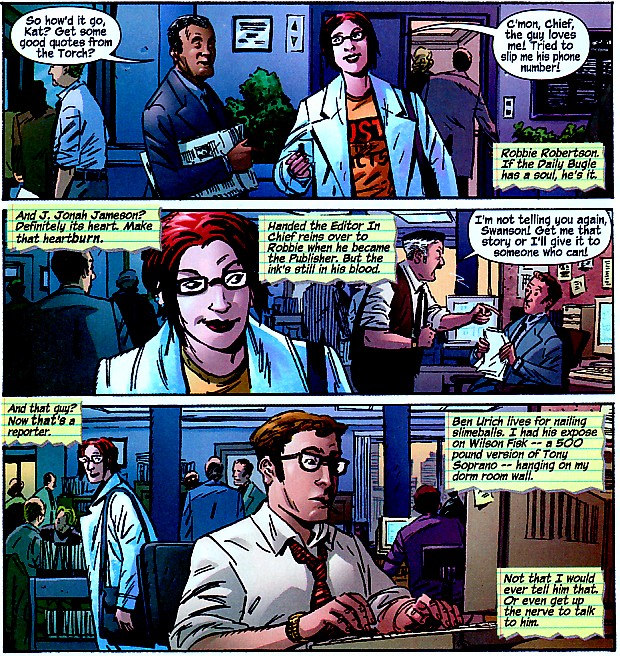 So we pass by the old standby characters we’ve come to know an love from Spider-man and Daredevil. We get to see them through Kat’s eyes and it’s a refreshing take on these classic characters. By now Kat has been fully fleshed out and if I had to pick someone to play her character for a movie, I wouldn’t hesitate to nominate Janeane Garofalo.

When she makes it past all these “walk ons” to her desk, Kat finds a surprise lead in the form of a subway map marked with six red “x’s” at various parts of town and a sticky note saying “connect the dots” left on her cubical desk. This mysterious clue has to wait, because Betty Brant walks up while Kat is trying to find a witness who will go on record about Torch’s carousing the night before. I remember Betty from Peter Parker days and if anything she’s only gotten more tough-as-nails. Guess working with Triple-J all those years hardens a person up. Seems Kat has a chance at moving off the superhero desk and on to the crime beat if she can come up with a big story by the end of the week. Brant is alternately pulling for her/kicking her rear in gear. 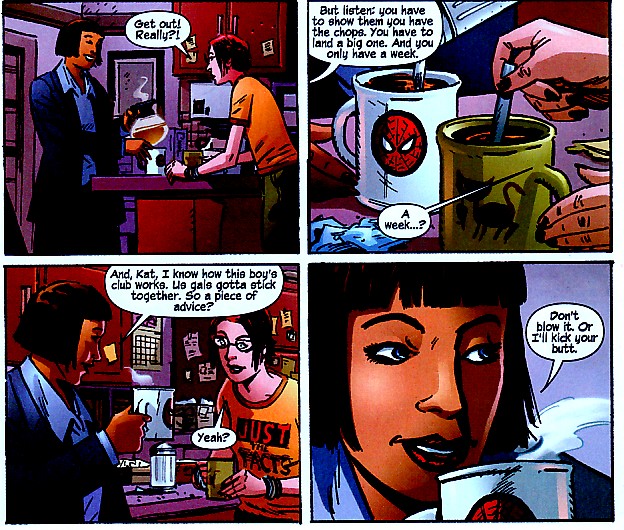 Do you think Betty uses that cup just to torque JJJ off? She’s got ball-breaker written all over her here. I remember when Betty was the mousey chick that got Jonah coffee while secretly giving Peter advances so he could meet the mortgage. You’ve come a long way, Betty.

Anyway, Kat has to report on a villain that’s found dead in an alley next. Guess who it is? 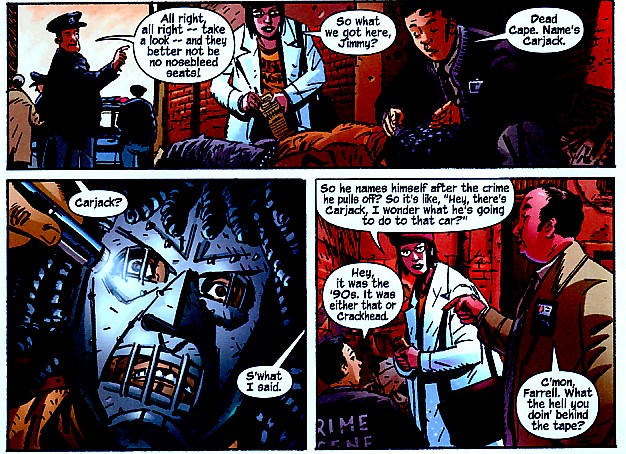 So Carjack gets jacked up by some unknown assailant and ends up dead. I feel as if some great circle of life has completed itself. We’ve seen Carjack’s first appearance and now his last. Hopefully no one is waiting in the wings to steal his faux Dr Doom mask and dreadlocks so they can be the new Carjack.

Before Kat can sweep the dishes on to the floor and pull Jimmy on top of her by his necktie, Kat comes to a startling realization. It happens right about the time he mentions that this is the seventh supervillain’s body they’ve found dead and dumped in an alley. 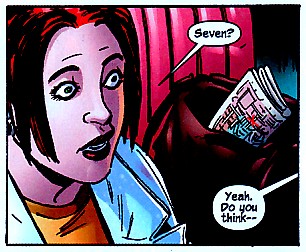 Nicely done. We can see the corner of the map with the six “X’s” hanging out of her purse while she’s just made the connection. Very well done. It’s times like these that you wonder who came up with that particular panel layout, the writer or the artist?

Where does one turn if you’ve got a lead but need more info? Why an informant, of course.

And here we have what amounts to the best informant in all the Marvel Universe, Turk. Turk has been beaten up for info so many times by Daredevil that now his body breaks out in bruises as soon as ole’ hornhead enters the room. Kat has to ply him with several shots of alcohol before his tongue loosens up.

Judge “No” Hart disappeared recently. He was awarded oversight on superhero matters, essentially policing the capes. A few months later and his wife ends up murdered. Hart’s body is never found, but he’s presumed to be either dead or her murderer. As Kat puts it, he’s “either victim #2 or suspect #1.”

Hart’s story is in the hands of another reporter, and Kat takes heat for going through his files. Then she’s back on the streets looking for someone who can lead her to Hart. Unfortunately, the areas she’s looking in are rife with criminals and superpowered no-good-nicks. So she’s really just asking for trouble such as this. 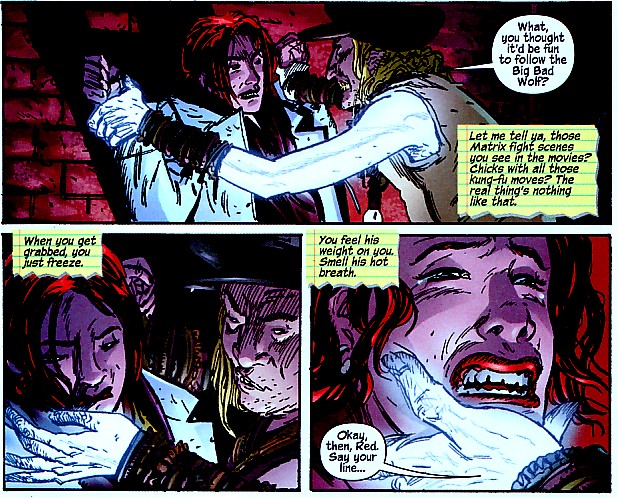 And she’s losing tons of points here. I don’t think she cares right at the moment, though. As long as she escapes alive she’ll be happy. Then a miracle occurs. 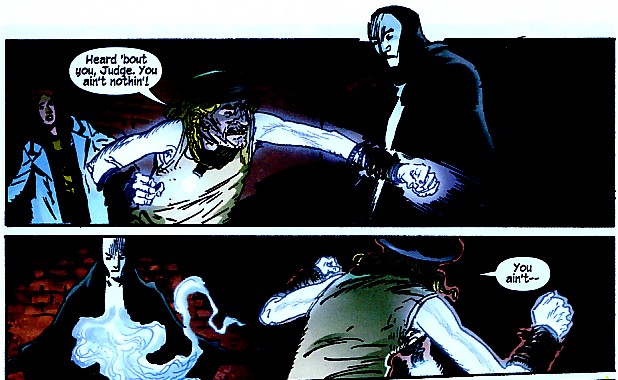 Yup, that’s what’s become of Judge Hart. He’s now a ghostly superhero with the power to suck out villain’s lifeforces. Which he does here, saving Kat’s posterior.

He vanishes leaving Kat with a lot to think about. She turns to Betty, who has one of the best lines in this very smartly written book.

Kudos all around. I’ve fallen in love with Kat and would like for her to be my soulmate (if she’ll quit smoking that is).
Posted by SonOfCthulhu at 3:22 AM