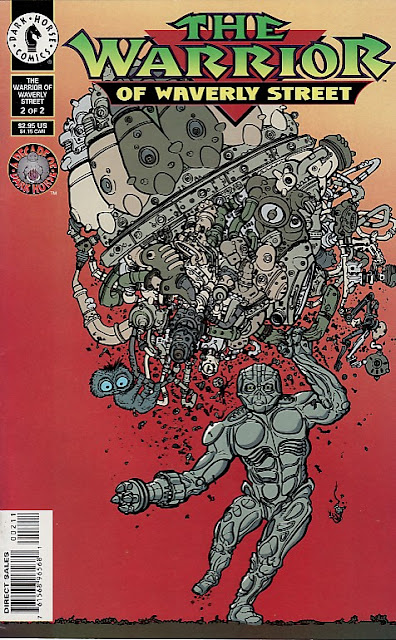 A comic that’s a prequel to a movie everyone wants to forget.

If the image from the cover of The Warrior of Waverly Street #2 jogs your memory, changes are high that you were still in school in 1997. WoWS was a working title to the movie Star Kid starring Joseph Mazzello, also known as “that kid from Jurassic Park”. If you need a bit more jogging check out the trailer on imdb here:

Star Kid didn’t really look like it needed a prequel. It was a fairly straight-forward ET meets Last Starfighter blend with heavy doses of pre-teen gross-out humor. But Dark Horse Comics has made a very successful business out of licensing movie properties for comics. What with the popularity and sales results of their Star Wars and Aliens/Aliens vs Predator series, it’s easy to see that they might go a bit overboard when licensing new properties. So we get a two issue mini-series that introduces the characters for a movie that doesn’t really need it. Seriously, if you’ve watched the trailer (or the movie for that matter), what more do you need to know about the two main characters? Spencer Griffith is a picked-on nerd who reads comics. Cy is an alien created battlesuit that is sentient and designed to kick bad alien’s butts. There! I just saved Dark Horse 44+ pages of ink and paper.

Dark Horse realized this of course and tried to take the story in a different direction. The comic is split very unevenly into two parts. The smallest part is reserved for Spencer, following him around in the weeks before finding the Cyborsuit in the junkyard. We get about 4 pages of him being a geek and getting his teeth kicked in by the punk who wears his ball cap backwards. The majority of the book follows Tenris, the lumpy, reptile/Ewok-thing that is the designer of the Cyborsuit. In the opening few pages, his planet is being systematically destroyed city by city. Tenris is plotting to escape with his wife. He’s being approached about continuing work on the cybot, but his answer is a resounding “NO”.

There is nothing more exciting in comics than a protracted argument about military contractor’s rights. And while the preceding three pages have been battle scenes of these reptile/monkey things fighting against the tree-like Brood warriors, there is a suspicious absence of real fight scenes for the rest of the book. Next we shift focus to Spencer for two pages as he starts his first day in school and shows up the class bully by answering a science question correctly. Silly and quite unnecessary. The few pages given to Spencer in this book could have been better used to flesh out the battle with the Brood warriors.
Meanwhile, our alien contractor has gotten off-planet with wife in tow. Unfortunately for them, it’s going to be a short trip. No sooner do they reach low orbit then they are spotted and shot down by a Brood warrior ship. 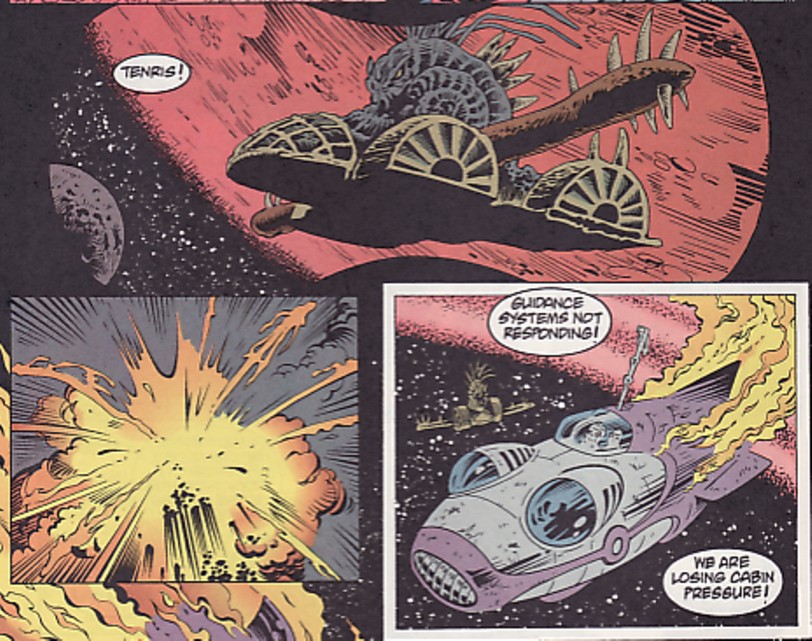 Yup, that’s a mighty imposing space ship there. Looks kinda like the “Delta Queen” being ridden by a Notre Dame gargoyle with two nasty caveman clubs stuck through it. I’ve got to hand it to the Brood warriors,  that is one innovative design for a space ship. Not really sleek or aerodynamic, but it definitely takes home the prize for “most original”. Anyway, Tenris’s wife bites it in the crash leading him to go back to the council. He gives them “one chance” to hire him back. They accept his offer using the power of the mystic pink pyramid. 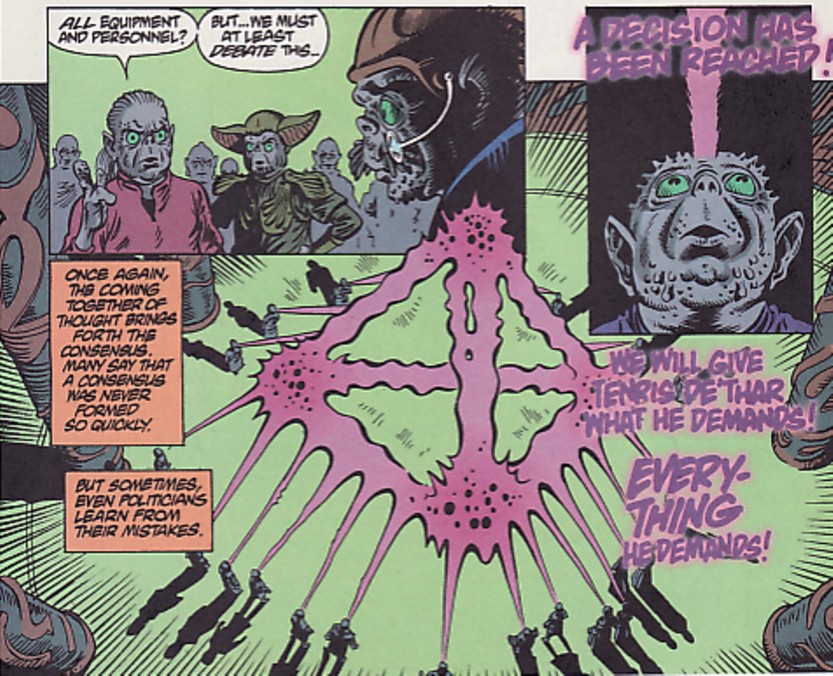 “Tenris demands white women, lots of Shiner Bock and a BLT with plenty of crisp bacon.” Ok, so he just wants his lab set back up. He gets to work on the Cybot. We get to see them working on things with Star Trek names like the “cyber-cerebellum”, “mecha-musculature” and “servo-tendons”. It’s almost enough to give me tingles in my “techno-testicles”. While Tenris’s first Cybot was a true robot, this one he designs with an eye for putting someone inside. Someone like a Victoria’s Secret fashion model or Jessica Alba. NO? Then all his design changes are stupid! Stupid, I say! Let’s check in on Spencer:

I like comics and all, but if they were the only friend I had, I’d shoot myself. Sorry Spence. He gets hit in the head with a tether ball. Meanwhile, Tenris tries out the Cyborsuit. After hooking himself up as a test pilot, Tenris has success after success until the suit see a few test dummies and decides on its own to take them out. Tenris sees the suit as a failure and starts to shut it down for good.

Nice shout out to the Cthulhu Mythos too, there.

Seems the Cyborsuit is sentient due to the neural link with Tenris. It was only acting as it thought he wanted it to. Tenris finds himself hesitant to shut it down. 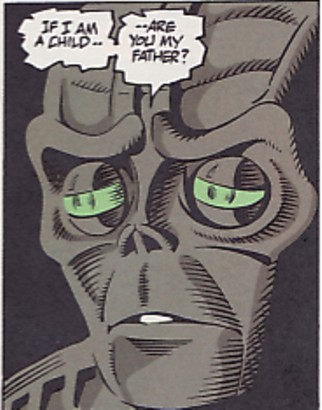 And that panel clinches it. Tenris joins forces with the Cyborsuit and they are shown punching a Brood warrior in the final panel. As for the movie tie-in, the next page is a movie poster that uses the Warrior of Waverly Street title and the most goofy cut-n-paste job ever. 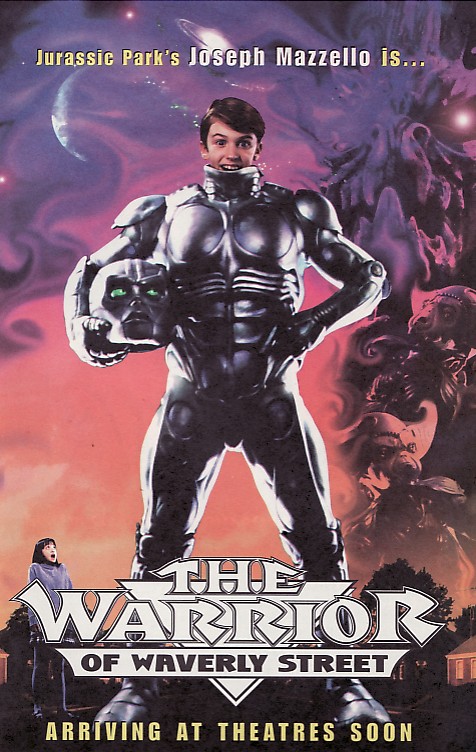 So, Star Kid fans should rush out and snap these two up. Or not. You be the judge.
Posted by SonOfCthulhu at 6:15 PM