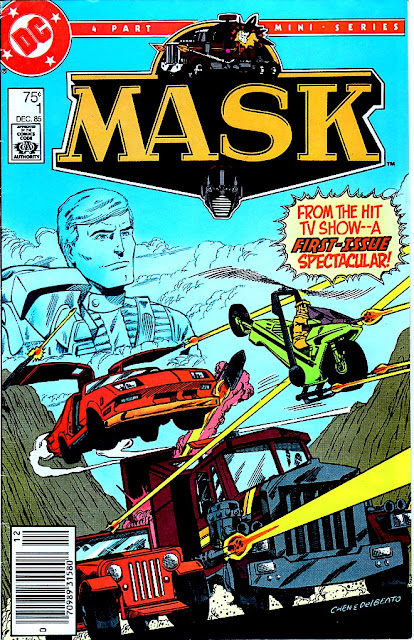 M.A.S.K. (which stands for Mobile Armored Strike Kommand) was a toy line produced by Kenner during the middle to late 80’s. It spawned two comic series by DC and a television show that lasted three seasons. The premise was to sell action figures with special helmets called “Masks” that allowed the user to perform special actions and pair them with a vehicle that transformed between two different shapes. Kind of a fusion of all the good things from the G.I. Joe and Transformer toys, M.A.S.K. must have seemed like a sure fire hit to the executives that launched the line. However, fate and a child's idea of a cool toy lineup is fickle and the M.A.S.K. brand didn’t fair that well, ending up on the scrap heap within three years.
I’ll admit to graduating from High School at the time the M.A.S.K. toys and cartoon came out, so I’m not real familiar with it. It has some very devoted fans, so there must have been some redeemable elements in the toys or the series. HERE is one fan’s site that covers the breadth of the M.A.S.K. experience.

The one thing about M.A.S.K. that I do find a bit silly was the Boulder Hill Playset. It’s essentially a gas station Transformer. You heard me right, it’s a gas station that changes into a secret M.A.S.K. base. 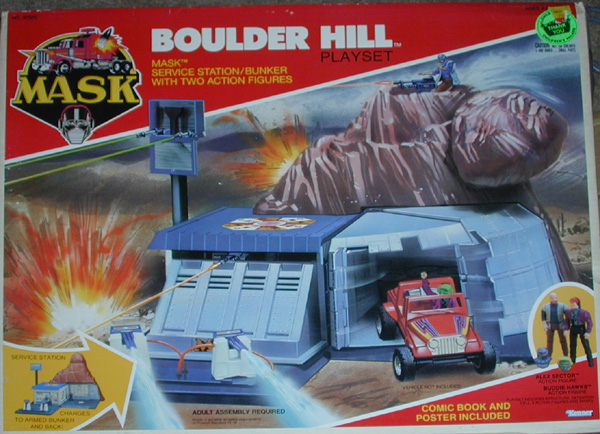 Now the idea of transforming toys has to be this: both things the toy transforms into have to be fun to play with. For the record, I’ve never asked for a toy gas station. Ever. All my cars ran on imaginary fusion engines and didn’t need any other fuel. So 50% of this particular M.A.S.K. toy is suddenly rendered inexcusably lame. The fact that the gas pumps and sign turn into laser guns saves it somewhat, but not by the margin it would need to earn my paper route money. 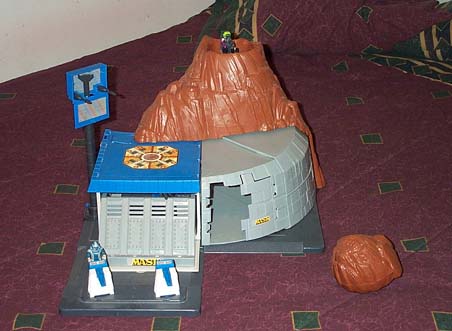 Other vehicles aren’t nearly so bad, but they suffer a bit when you compare them to Transformers or even Go Bots. A Camaro you can pretend flies because it has doors like a DeLorean doesn’t pack the same punch as a jet plane that can turn into a robot. If they are on the same shelf in the toy store, that Camaro car is going to lose. Even if it comes with an action figure with crazy-mad headgear. 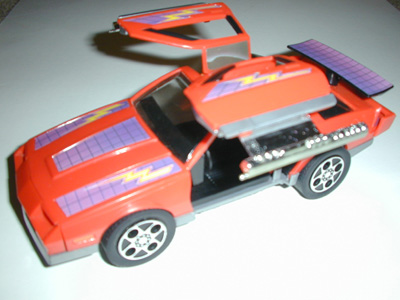 And is it just me or does the Condor motorcycle/helicopter look kind of silly? 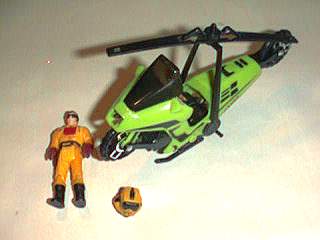 I’m not certain I’d trust that flimsy thing to hold my favorite action figure. M.A.S.K. needed all these “cool” transforming vehicles and powered crash helmets to fight their arch-nemesis V.E.N.O.M (the Vicious Evil Network Of Mayhem), who also had transforming vehicles. Possibly the best vehicle out of all of these was the main bad guy Miles Mayhem’s Switchblade, a helicopter/jet plane. Now that’s two toys that would make any boy happy.

Our four issue comic series doesn’t follow the M.A.S.K. TV show, but contains the same characters in new scenarios. The leader of M.A.S.K is Matt Trakker, and in the opening of issue one he’s been sent on an aircraft carrier to the North Atlantic to retrieve an experimental star wars satellite that has soft landed in the ocean. Appears that it became activated upon reentry, making approaching it a suicide mission.

Matt takes the plunge and finds the malfunctioning piece of space junk resting at the bottom of the sea bed while it makes sushi of the surrounding aquatic life. If only he could get to that panel and punch in the abort code. Luckily he learned all the dance moves from Britney Spears’s “Toxic” video, so he’s got a good chance of making it. 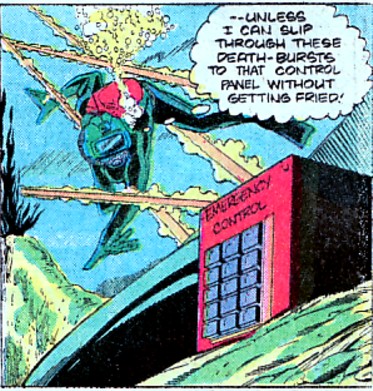 And he makes it! Now if only he can type in the extremely long complex code that turns off the satellite’s death ray… 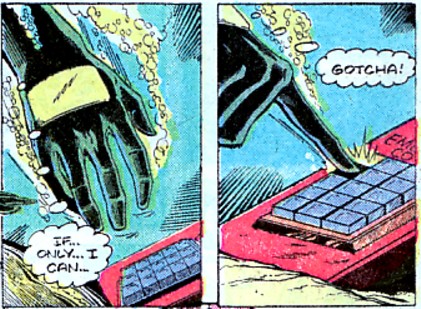 …or maybe just hit the power button and switch it off. I’ve never seen a complex death trap that was so easily defeated, but whatever. So Matt loads the satellite up in the trunk of his car and then surprises the sailors by driving right off the end of the ship. I guess the M.A.S.K. stuff isn’t super-super secret, just sort-of, kind-of maybe secret.
What Matt does next confirms that thought even more. He flies his secret flying car right up to the Boulder Hill Gas Station before landing. All the while telling himself how the “uninitiated” see it as just another gas station. Which sometimes has cars that turn into jet planes flying around it. Remember folks, it’s smart guys like Matt that are protecting our country from terrorists and evil doers. I’m pretty sure when they hand out the keys to the flying cars, they should add something about being discrete. 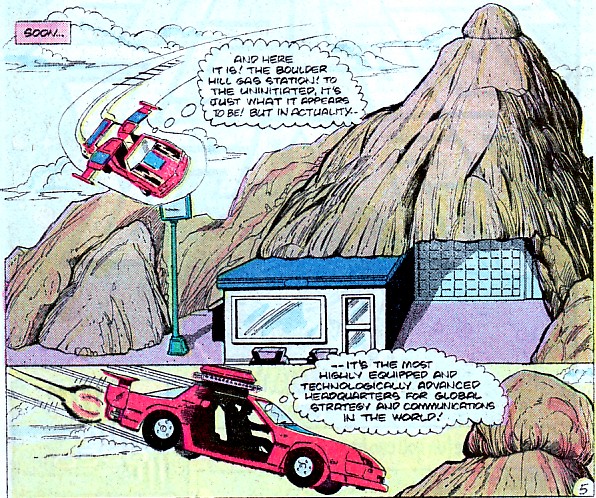 And true to form, the villains of this piece HAVE been watching. Prepare to meet Miles Mayhem and his two VENOM henchmen. Do you think that while growing up, Miles had any other choice than to become a villain? Look at that name and tell me you think he didn’t get picked on by the kids and teachers alike. The real villain in this story: any parent that would hang that moniker on their kid.

Miles is flying his combination helicopter/jet plane, one of the few toys worth having for both of its forms. He’s assisted today by Sly Rax on the Piranha combination motocycle/submarine. Sly is the smarter of Miles’s two henchmen. Miles other helper is agent Cliff Dagger, a cyclopean muscle-bound oaf who is only there for comic relief. He’s driving Jackhammer, a black Ford Bronco that sprouts a weapons platform and front mounted turrets. While that doesn’t really make it a different vehicle in my book, it does make it a pretty cool toy. It’s also something that O.J. wishes existed in real life. 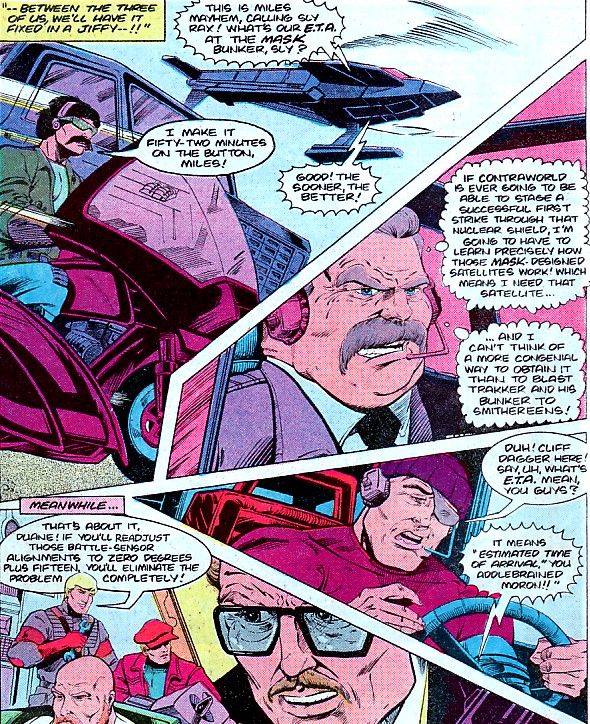 Poor Cliff Dagger. The lunkhead does get some pretty good lines in later. As for the MASK team, they get wind of VENOM’s coming attack and rush off to energize their MASK helmets. Just in time too because look who’s pulling up to the pumps. They want something more than gas and it ain’t a free window cleaning or directions. Cliff gets a peek at the base transforming and apparently wets his pants. 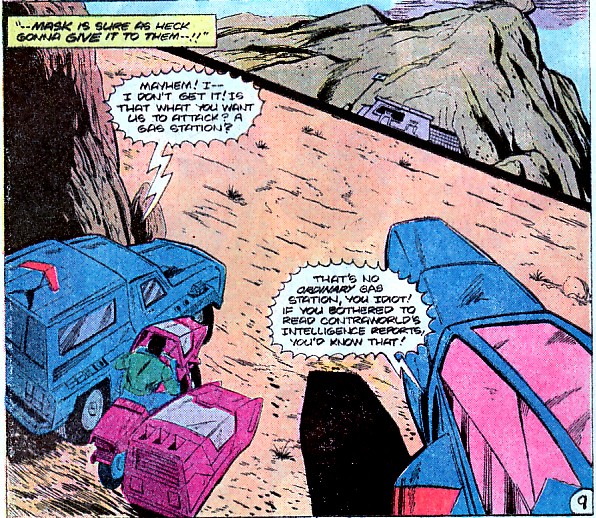 You really have to feel for a man so mentally challenged that he can accept that what he’s driving can turn into a blasted tank on wheels, yet freaks at the first sight of something else doing the same thing. Cliff is my posterboy for rehabilitation. Anyone who is this big of a scaredy cat just needs some love to turn them around. Speaking of turning around, none of the VENOM troops do, so the gas station’s ice guns freeze them in place. Sly’s submarine does him zero good out here in the desert and Miles finds the boulder-shooting action of Boulder Hill too much for his helicopter. 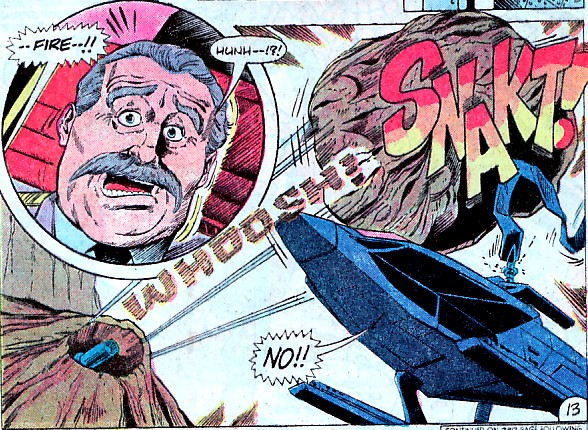 Looks like he’s going to need to find a good helicopter/jetplane mechanic wherever he lands. Miles transforms to jetplane mode and flies away, while the other two agents chop their way out of the ice. And the brilliant minds of the M.A.S.K team allow all of them to get away. So they have a chance to capture two-thirds of the VENOM strike team while they are immobilized, but naw, they let them go. If you ask me, the Boulder Hill secret base is asking for someone to drive a load of fertilizer up to it with a fuse coming out the back. Maybe I’m over-analyzing a comic book based on a TV show about a line of kids toys. Or maybe this is just common sense talking.
But it’s all good, so long as Matt Trakker gets to take his son Scott and T-Bob to the amusement park on time. And everything is going along fine, even if the balloon vendor seems like a possible child sex offender, when suddenly Matt’s supersecret beeper goes off. He’s got to meet up with the rest of the M.A.S.K. team, so Scott is left in T-Bob’s care. 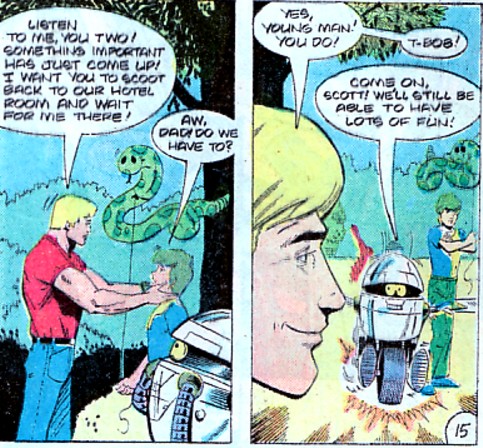 T-Bob the robot seems to have two modes also: Mode 1 - motorized scooter and Mode 2 - robotic baby-sitter. M.A.S.K should just patent that technology and bring about world peace by selling T-Bobs to parents around the globe. Appreciative parents might even help the M.A.S.K. force track down VENOM with all their new free time. I think they should really consider it.

Meanwhile, Matt contacts Duane Kennedy to find out what the red-priority alert is all about. Duane informs him that all the gold in Fort Knox has disappeared. So Matt feeds the information into his M.A.S.K. computer so it can analyze it and cross reference the M.A.S.K. team data file to select agents that are uniquely suited for this mission. And the highly sophisticated computer chooses… 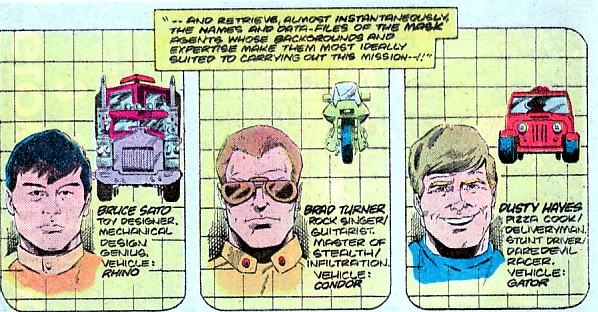 …a toy designer, a garage-band rock guitarist and a pizza delivery boy. Let’s just say that they wouldn’t exactly be my first choice for solving the mystery of who stole all of Fort Knox’s gold. I might be inclined to invite two of them to my next house party, though. Especially if Brad can convince his bandmates to tag along and play a set and if Dusty supplies a few free large pepperoni pies. The team of “experts” assembles at Fort Knox. They are lead into the vault which is one of those “locked door” mysteries. The gold’s gone, but no evidence of how the crooks got it out.

I didn’t know that Fort Knox was made out of giant LEGO bricks. As it works out, I also am completely ignorant of the physical properties of concrete. The MASK team finds a giant hole that is covered by the concrete floor of the room. It leads to a tunneling device that VENOM has used to steal the gold. The explanation from the book is that VENOM poured a fast-drying form of floor covering as they exited with the gold.

Now think about this for a minute. How do you pour a floor over a hole without covering it up? Especially if you are in the hole while doing the pouring. And never mind the pouring for a minute, how do you get the concrete to form the same pattern as the rest of the floor above if you are UNDER it when you create the floor? Yah, this is pretty much the lamest “locked room” answer that anyone’s ever come up with. MASK finds VENOM and the lost gold, however they again miss their opportunity to capture any of them. Matt does note that Miles Mayhem isn’t present, which seems rather odd.

And that’s because Miles Mayhem is kidnapping Pete and T-Bob using the balloon Matt bought for them at the amusement park. Earlier in the issue we saw the same type of balloon being delivered to Duane Kennedy’s office, so it’s safe to say that he’ll get nabbed as well. All this leads up to a big “to be continued” cliffhanger for next issue. 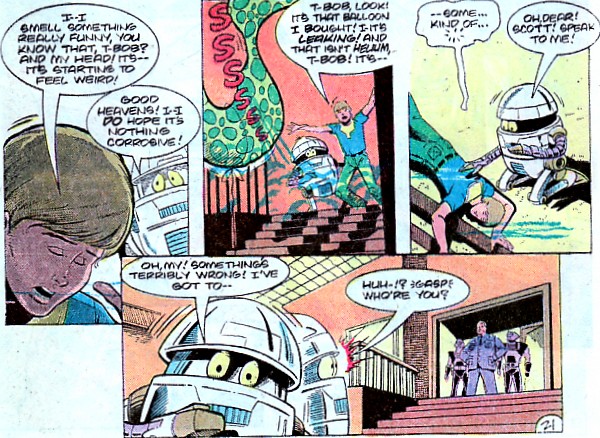 M.A.S.K. was in syndication for three years and Kenner launched a second set of toys with a racing theme in the second year. The initial DC comics series was a four issue mini ran from 1986-1987 and is not to be confused with the mini comics that actually came with the toys. DC followed it with a ongoing series that lasted 9 issues and produced two annuals. After that, M-M-M-MASK suffered sales defeat and surrendered its shelf space to other toys and comics.
Posted by SonOfCthulhu at 4:35 AM