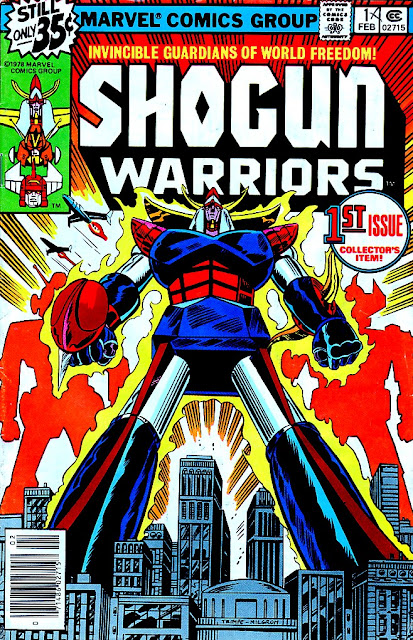 The BEST book ever created about giant robots!

Shogun Warriors was one of the few toy crazes that I got into back in 1978. And by “toy craze I got into” I mean that I was 11 and I thought the Shogun Warriors were the coolest things to come along since Jesus. The whole line of giant robots and their various support vehicles came from separate Japanese anime shows, most of which hadn’t even been seen in the states. Mattel licensed the figures, made some really cool toys out of them, changed their names ever so slightly to make them easier for us round-eyes to pronounce and then marketed them without any background material. The toys never really caught on and almost all of them would be banned today due to their small spring loaded missiles and arms, perfect choking hazards for small kids. It’s a wonder how any of us survived to adulthood given that the toys we played with back then no sane parent would give their kid today.

The two toys I had from the Shogun Warriors collection were Two-in-One Raydeen and a Shigcon Tank, both part of the die-cast metal line. They were both sturdy toys that had a real weight to them when you held them in your hand. 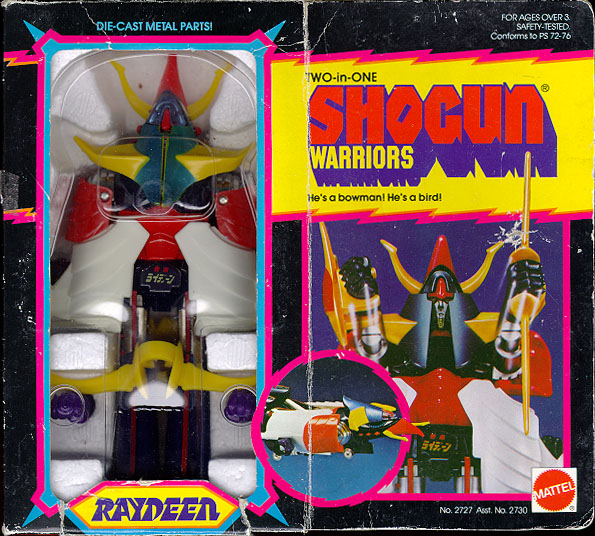 Raydeen was awesome with his rocket arms that you could shoot across the room, leaving you with stumps BUT you could move these shields on his back around to cover the missing arms, close the cover over his face, detach some wheels on his back and bend his legs at an angle to turn him into this wicked looking flying-bird robot that rolled better then most Matchbox cars. 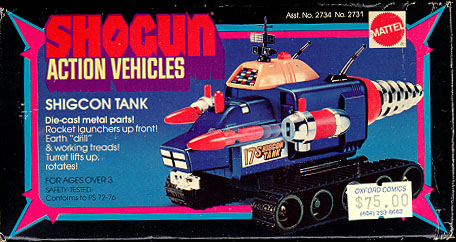 The Shigcon Tank featured real rubber treads, dual missile launchers that would shoot things up to 4 feet away, a rotating drill in the back that you could push in and depress a button on top of the tank to make it pop back out and severe swivel action because the entire body of the tank was built onto the treads lazy-susan style. That means you could turn that bad boy to any angle with respect to the treads.

I don’t have either of these toys now, so that price tag on the box makes me kick myself twice as badly as I normally would. And normally I would kick myself pretty damn hard. They were very fun toys to play with. To see the whole line Mattel put out at that time, go here:

So now you know how biased I am. I wanted to clear the air for you to gauge the awesomeness of the Shogun Warriors comic for yourself. Doug Moench wrote the series, along with the Godzilla, King of the Monsters comic. Neither of these series would last beyond the two year mark. Moench’s work speaks for itself, he has a breadth of titles with a wide range of story types including various Batman comics to the Thor and Shang Chi series. The extensive list of series he’s written shows versatility, even if he never really settled down on one particular book for very long. Herb Trimpe does the art chores respectably. While I’m not usually a big fan of his penciling style, in this series he is both very consistent and exciting to watch. His art captures the feel of giant robot battles with wonderful results.

Thankfully, both writer and artist know what their audience wants when it comes to a giant robot story. The answer is not “long, drawn out origins” either. 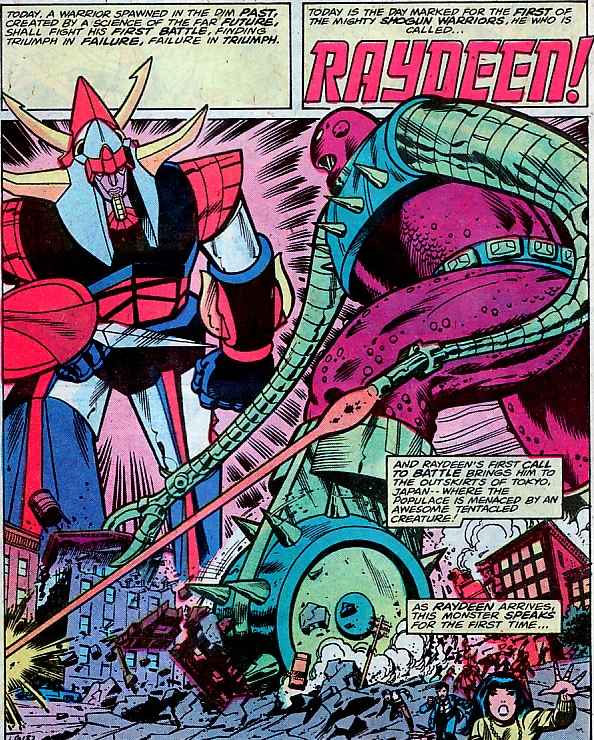 Bam! There’s my man Raydeen about to throw down with some giant cyborg lava monster. Page one and you can already hear Michael Buffer’s infamous call to battle “Let’s get ready to Rumble”. I love that cryptic opening line about how Raydeen will find victory in defeat and defeat in victory or whatever. Whets my appetite for what is to come. So who is this putting the hurtin’ on Tokyo?

Rok-Korr, who I always assumed would pronounce his name “Rock-Core”, is so evil he’s spouting lines for old republic serials. Even cooler is that Raydeen is a machine being piloted by other characters. Because the pilot of a giant robot can have love interests, a personal life and whatnot that add to the story. A giant robot that’s “alive” through the miracle of AI, not so much. Unless you count him sexing up the Holland Tunnel while bored one day. 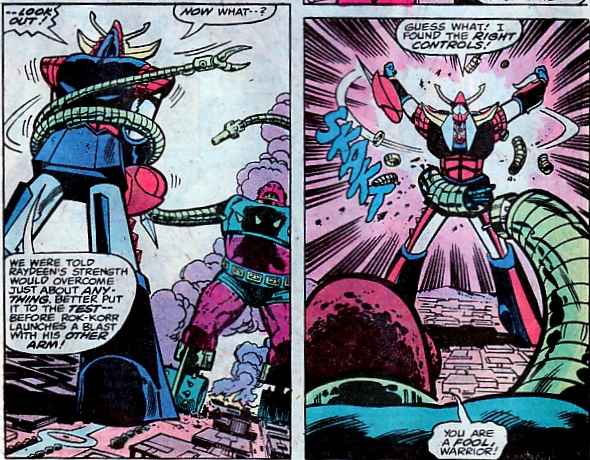 Not only that, the pilots of Raydeen don’t have a real good idea how to drive him. So not only do we have the potential for them to grow as characters, we also get to watch as they figure out just what this bad boy’s powers really are. It’s like watching Spider-Man’s origin all over again. Looks like they learn pretty quick, too. Quick enough to cost Rok-Korr a pincher arm.

Now we’ve got missile-on-missile action! And notice that huge hunks of real estate are just blazing away. This is a Godzilla fan’s wet dream. The missiles destroy each other leaving Rok-Korr to try a more direct approach. 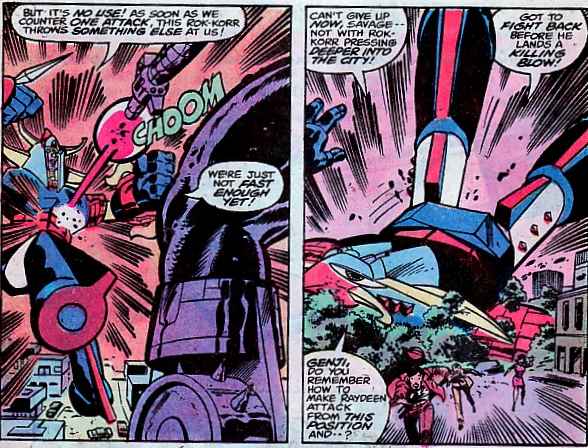 Boom! He’s down folks. The quarterback is toast! Not really, but it’s nice to see that our three hero pilots are getting a good workout from the first monster they encounter. It’s also interesting that their efforts just barely seem to work. They find the right controls or remember how to use something in the nick of time. Also each one of them works as part of a team to defeat Rok-Korr. There’s no posturing or pulling rank on each other. So far a great start and an awesome big robot battle. 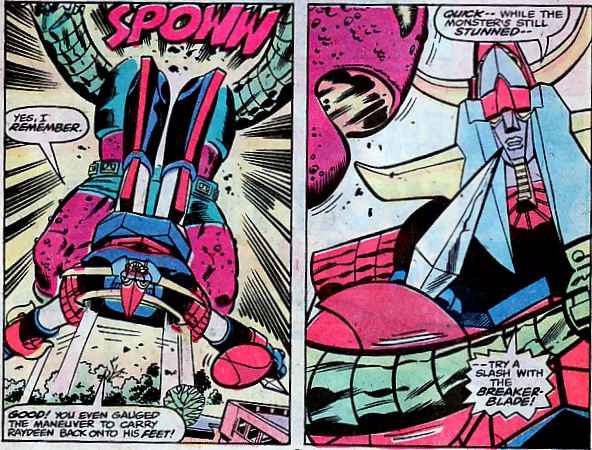 Now they take it to the bad boy and turn the tables on him. Course, Rok-Korr has something else up his sleeve. Or more precisely, in his sock. 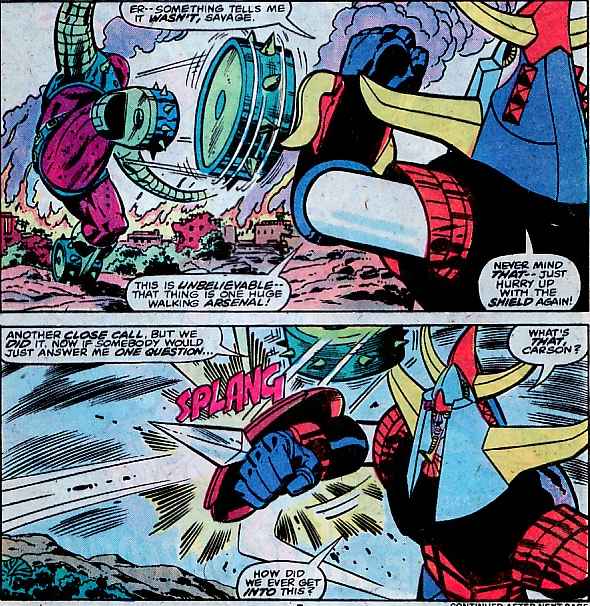 Officially wowed now. I don’t know which company is making it, but I want a Rok-Korr toy. Anything with that many weapons systems would be a blast to play with. And as a giant robot fight fan, I’ve gotten my money’s worth out of the book so far. Now if they want to do a flashback and throw a complicated long-winded origin story at me, I’ll happily sit through it. And sure enough, Moench and Trimpe understand this and move the story back a bit in time to explain how we all got here. 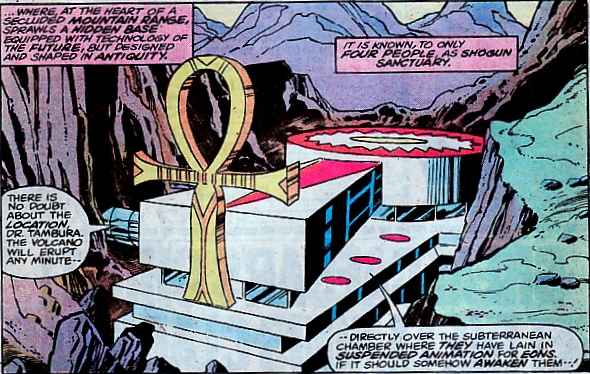 So here we have the Lord Zordan-ish “Followers of Light” who appear to be very interested in the recent activity of a certain volcano. Seems they’ve been tasked through out the millennia, to watch for the reappearance of Lord Maur-Kon and his agents of evil. Which, when you think about it, is a pretty sweet job. Someone wants to set me up with some high-tech digs just to sit around for a few centuries in case someone reawakens from years of slumber, just say the word and I’m there. As long as it has a fast internet connection and good dental then it sounds like my dream job.

In true Mighty Morphin Power Ranger form, Lord Maur-Kon does awaken, a giant monster bursts from the place he’s long laid dormant and the Followers of Light spring into action. And the first thing they do is… 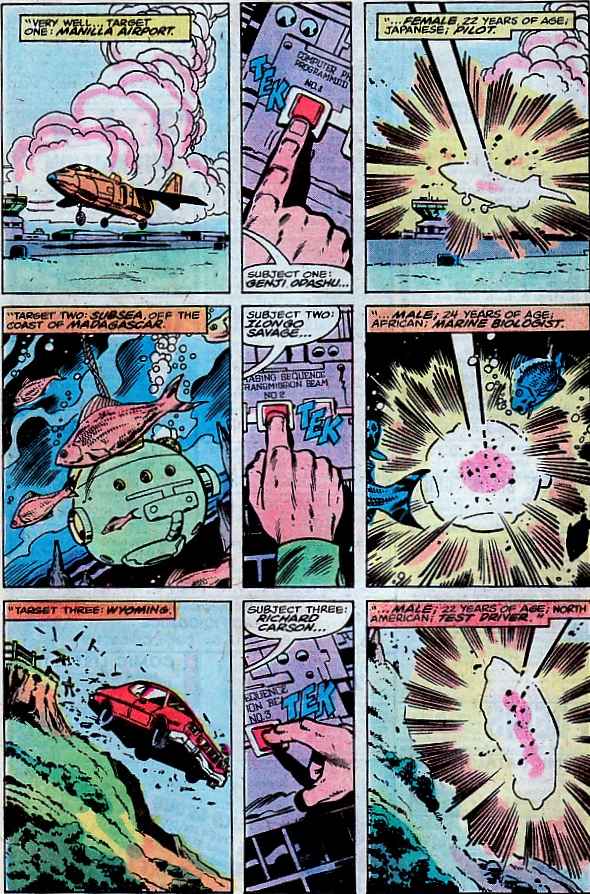 ...murder three innocent people completely unrelated to the story so far. Ok, so they don’t really kill them. Those beams transport them to their sanctuary. Sorry for the mix up folks. 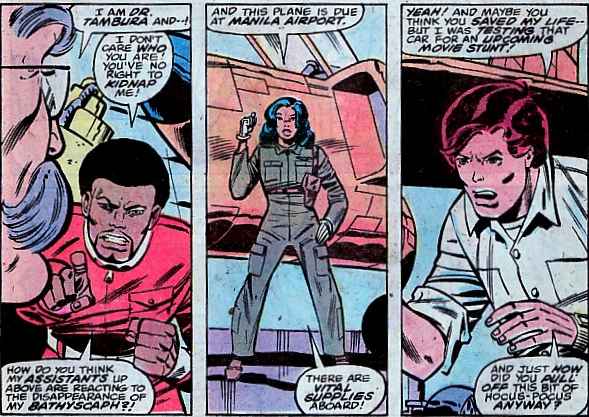 Dr. Tambura and the other Followers proceed to calm down our three hot-headed new recruits and give them a tour of the facility that culminates in a very lame holographic show. They tell them how the Earth was marked for evil by bad aliens until the good aliens captured the bad aliens and trapped them all in a volcano. You know, pretty much the whole Scientology stick. 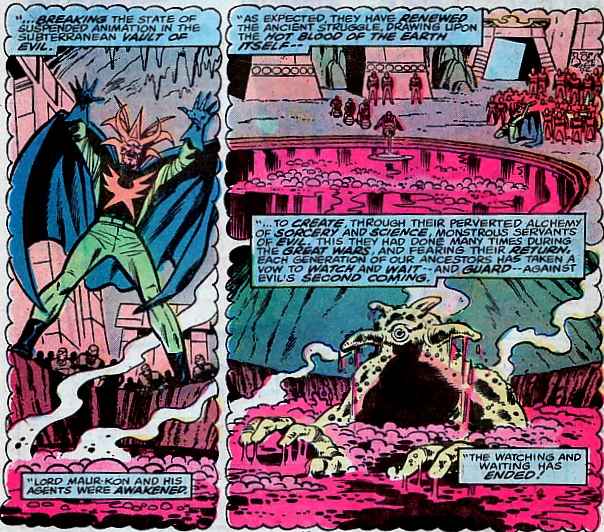 He then tells them about how Lord Maur-Kon and his agents are responsible for global warming, missing socks and the giant monsters that are terrorizing the world. Then he shows them his giant robot, gives them his best sales pitch and tries to sell them some auditing sessions. 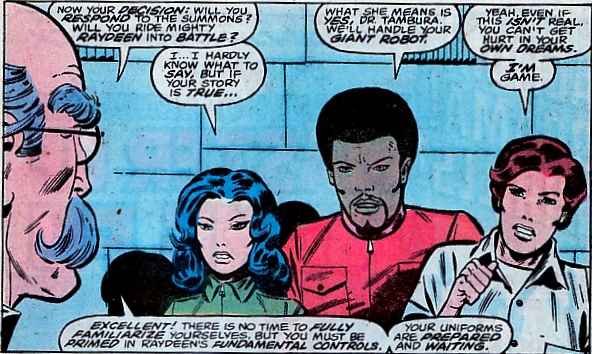 And they fall for it. Granted who wouldn’t want to pilot a giant robot into battle while simultaneous defeating the man responsible for years of mismatched socks. What follows is a one panel montage of the three heroes summoned being trained for battle while sitting on odd looking exercise equipment or flight simulators. Then we’re off!

Trimpe manages to pull off something almost Kirby-ish in this panel with the foreshortened bodies and odd room style. Way to go Herb! All of this flashbacking ends here, however, and we are rocketed back to the incredible Rok-Korr battle. As you remember we left Raydeen on his feet and while Rok-Korr was tipping over, shooting his “missile toes” at them. Appears things have only gotten worse for him. 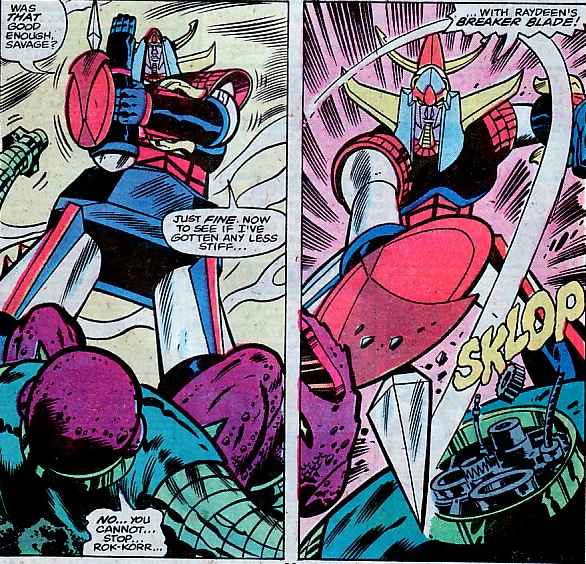 With one Hi-Ya of Raydeen’s breaker blade (great name for that sword/shield thing), Rok-Korr is pushing up daisies. A solid win for the good guys. 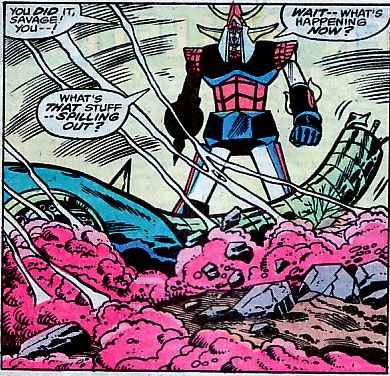 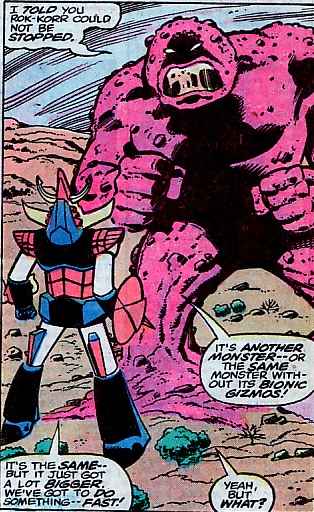 All that pink Play-do stuff forms into a new Rok-Korr, who seems both bigger and more than slightly pissed off. Now’s the time to run guys!

Rok-Korr spits up the contents of a small quarry onto our three befuddled warriors, burying all of them but their feet.

Which leads them to decide that maybe they need some more training before taking on Rok-Korr, Version 2.0. So they break out of the ground… 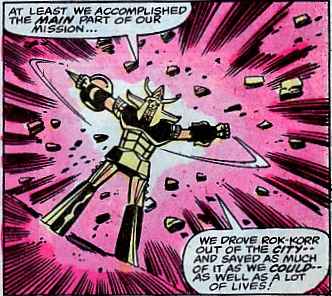 …and lead the monster away from the city. But luck is with them, because when they get back to the Sanctuary, they find that Santa Claus dropped by while they were out. Good news: he left them a couple of presents, Bad news: They don’t fit under the tree.

And that’s where the issue ended. So much bruising, brawling fun and so much promise of more. Sadly Shogun Warriors wouldn’t get the television tie-ins that would help fellow toy-to-book colleagues G.I. Joe and Transformers go on to hit status. The run at Marvel lasted a paltry 20 issues, the final 2 bringing in cameos by the Fantastic Four in hopes of jumpstarting sales. Alas it was not to be and the Shogun Warriors fell on their own swords.

But man what a ride…
Posted by SonOfCthulhu at 6:11 AM