The Untold Legend of the Batman #3 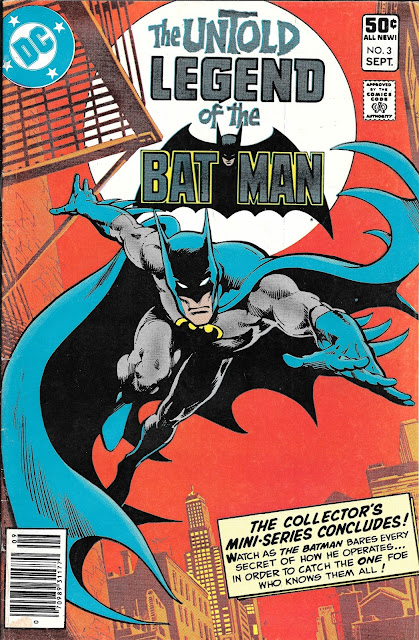 And we know why it shouldn’t be told…

This book proves how hard you have to work to recap and retcon 50 years’ worth of Batman history. The Untold series was meant to show a behind the scenes look at the Bat-mythos with things people didn’t know about Batman. The fact that many of these things amounted to made up fluff that you didn’t really care about, notwithstanding.

Oh, and there was a bad guy in this too. A menacing bad guy with access to Batman’s secrets. And his reveal this issue has to be seen to be believed. 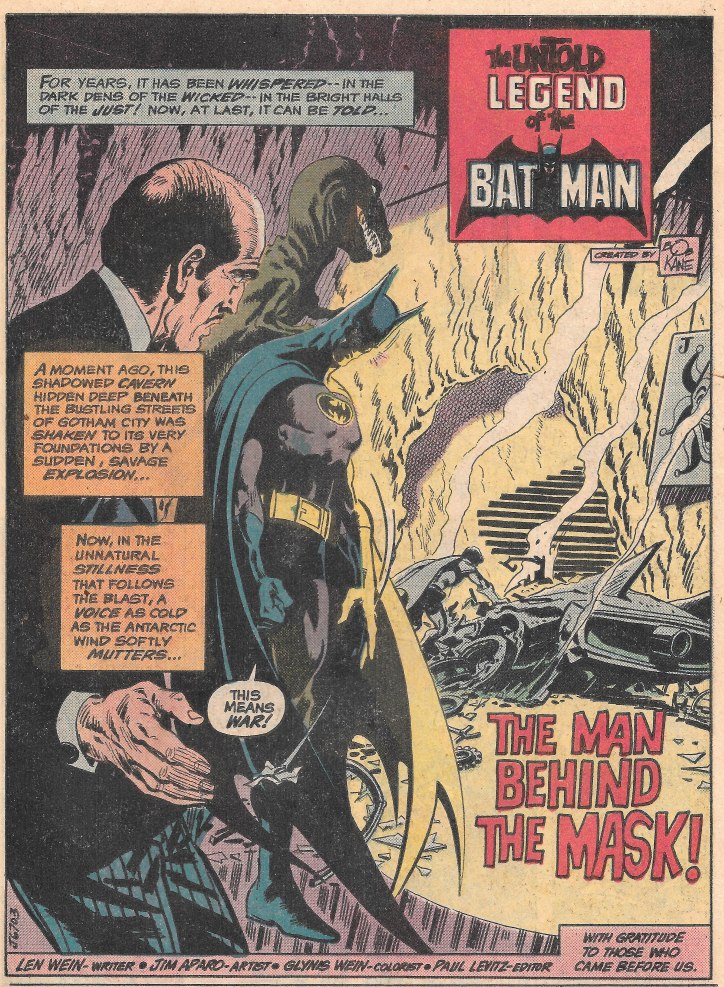 Let’s start in with the charred wreck of the Batmobile, sitting in the sub-basement of the Wayne Foundation in downtown Gotham City. Bruce abandoned the quite country manor and moved to the Wayne Foundation so he could keep Dick Grayson near as the young man attended Hudson University. This new Batcave located in a basement of the building accessible by secret entrances and a private elevator was the current home of Batman and Robin while they lived on the mean streets of Gotham.

Except for the fact that the actual living area in the Wayne Foundation looks to be stationed on the rooftop of a large high-rise over a city block in size, so maybe not that close to those mean streets. You can’t expect Bruce Wayne to actually be THAT close to Gotham streets. They are pretty dangerous.

In last issue, the Batmobile blew up and now is a tangled heap of melted metal. Bruce’s mysterious adversary has apparently beaten him again, forcing Batman to declare war on their mysterious assailant. What else has this enemy done to raise Bruce’s anger? 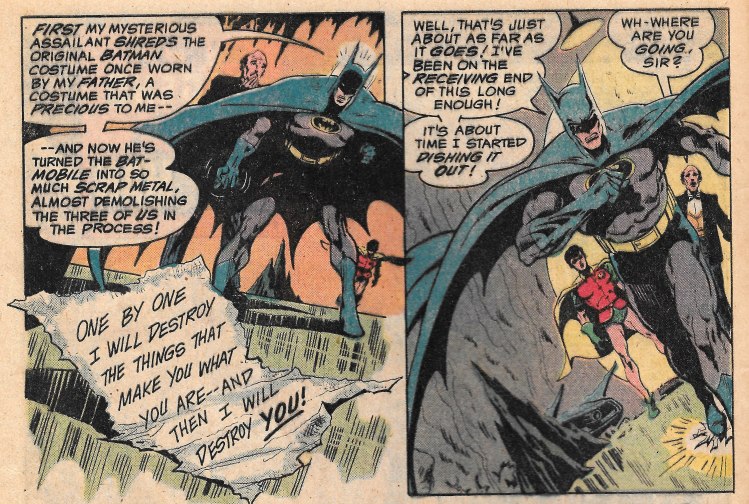 Oh, the original Bat-costume that Bruce’s father wore to that masked ball those many years ago that might have subconsciously influenced Bruce to decide to become Batman years after his father’s death. Not truly a retcon, The First Batman, a silver age tale first saw Thomas Wayne trouncing mobsters while wearing a Batsuit worn for a masquerade ball, that eventually lead to Thomas’s own death at the hands a mob enforcer. That story was recount in the Untold Legend issues preceding this one.

The loss of that suit and now his car riles Batman up like nothing we’ve ever seen. He forbids Robin from following or helping him. 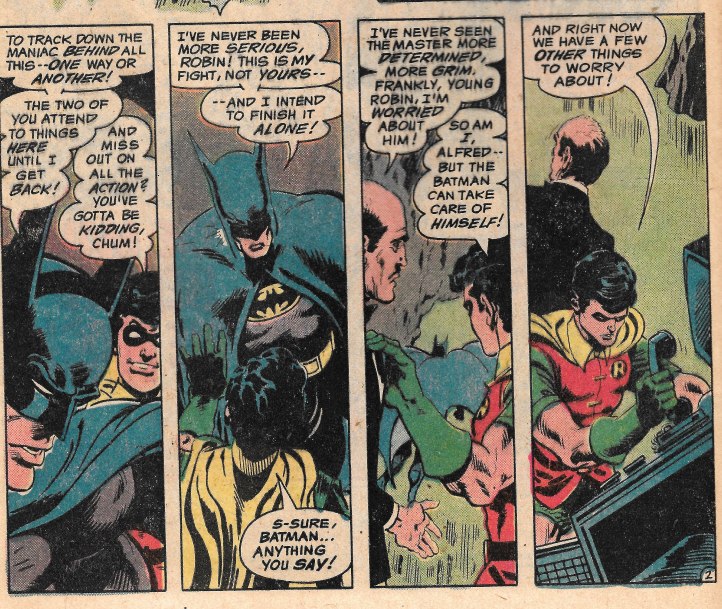 Which appears to be cool with Grayson, as he has an important call to make.

A call made to this gentleman, fresh out of a car crash filmed for his motion picture studio… 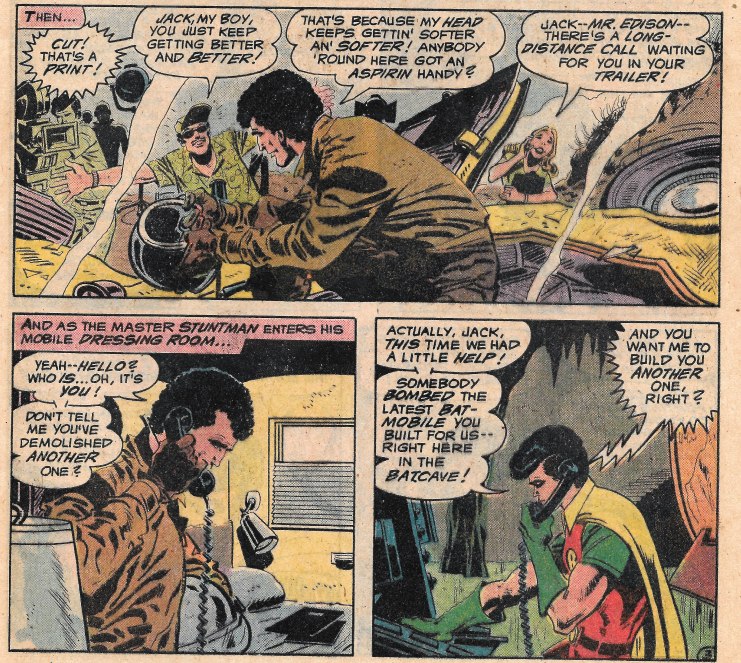 Meet stuntman extraordinaire Jack Edison. Edison also holds the honor of being person who builds the Batmobile each time Batman needs a new one. Here’s a little on how that came to be. 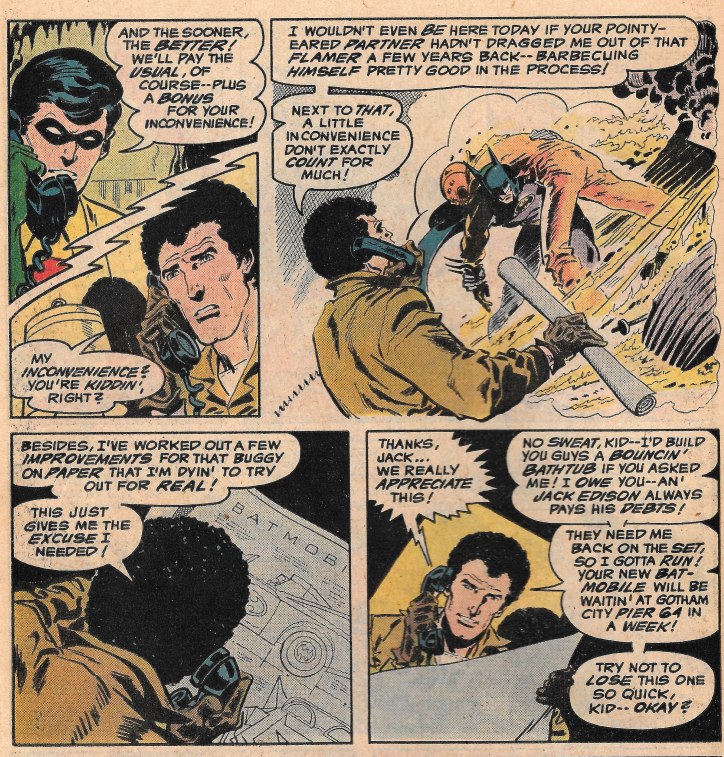 To my knowledge this is Edison’s first appearance and the only recorded history of Batman rescuing him from his burning car. While the bravery aspect of it seems like Batman, what the heck was he doing watching a race in his Batsuit?

As Robin secures a new Batmobile. Batman goes to visit his ears on the street. Also it appears the this page of Batman will be played by Clint Eastwood. 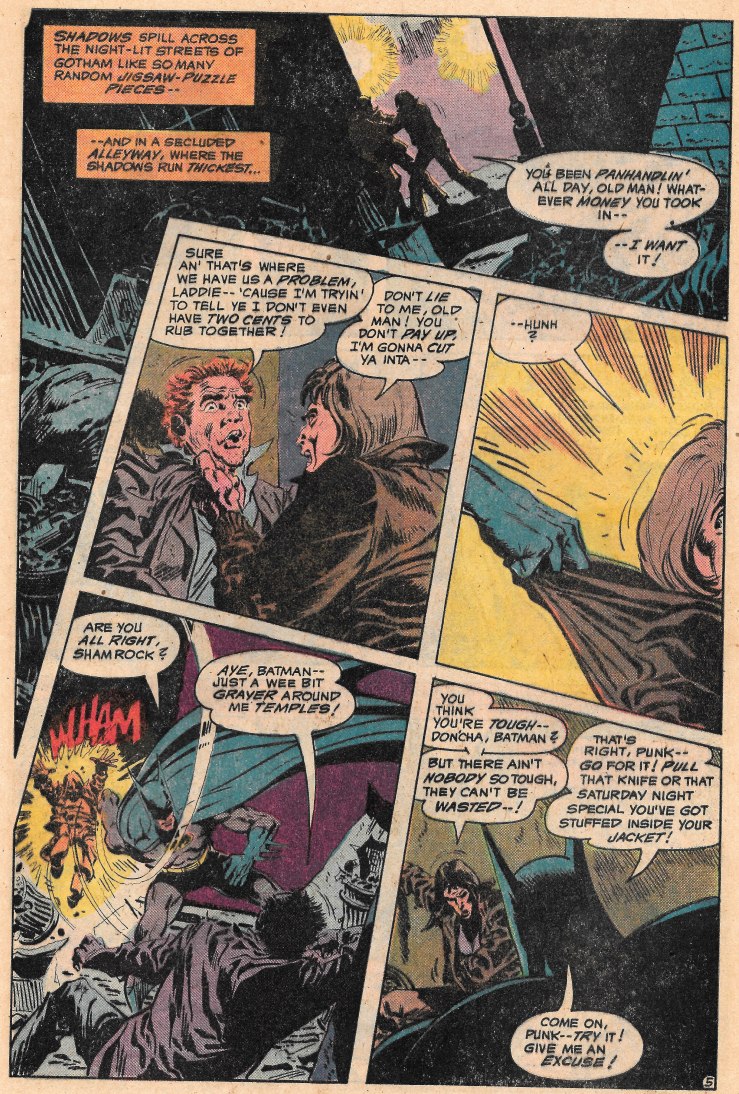 As we mentioned in Batman 322, one of his guys was the aptly racist character called “Shamrock”. Shamrock holds the record for most Irish stereotypes in a character. 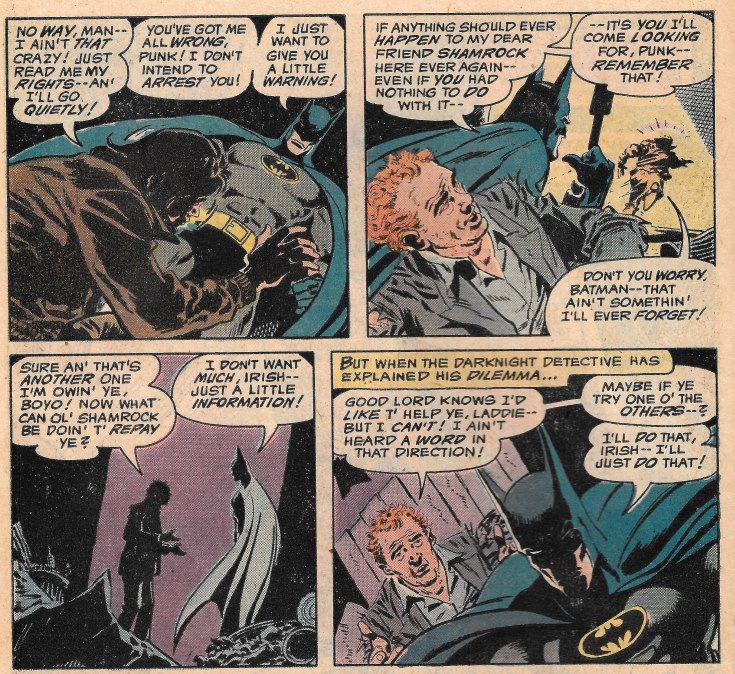 But what I DIDN’T know was that the writers of the day had given Batman an entire cast of homeless people each with a unique stereotypical handle. How…quaint? 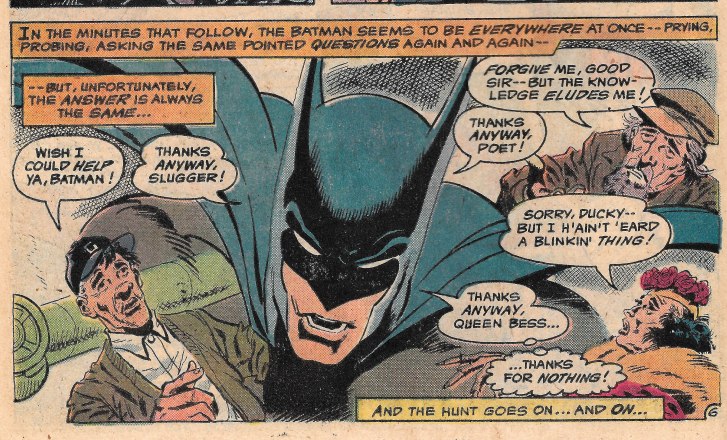 I’m beginning to see why some of this Batman Legend is untold. I don’t think I want to know it all now.

Finding no leads, Batman heads to Commissioner Gordon’s office, who when you think about it has to be the hardest working police commissioner ever. The man NEVER is home at night. He’s always at the office when Batman drops by. Anyway, Jim Gordon drops some heavy info on Batman. 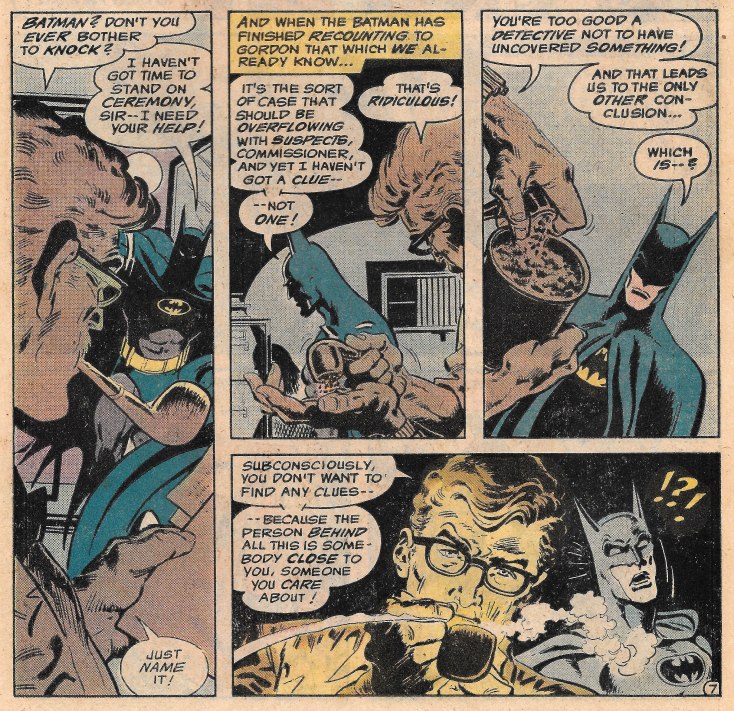 I always knew there was something fishy about Alfred. Oh, wait! Not him.

This interlude does give Gordon a chance to muse after Batman sneaks off about how his first few encounters with the dark knight detective went. 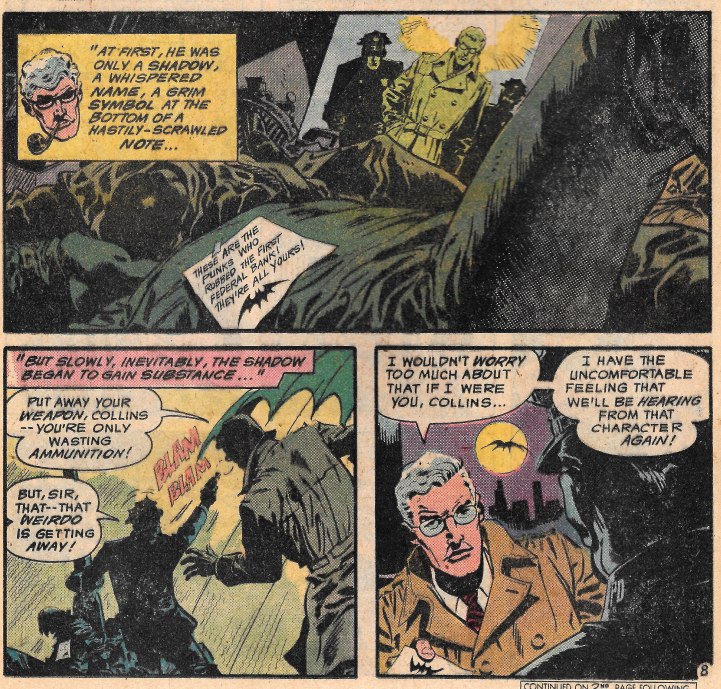 Jim admits to a very adversarial relationship between the two which culminated when finally confronted with the rival crime fighter. 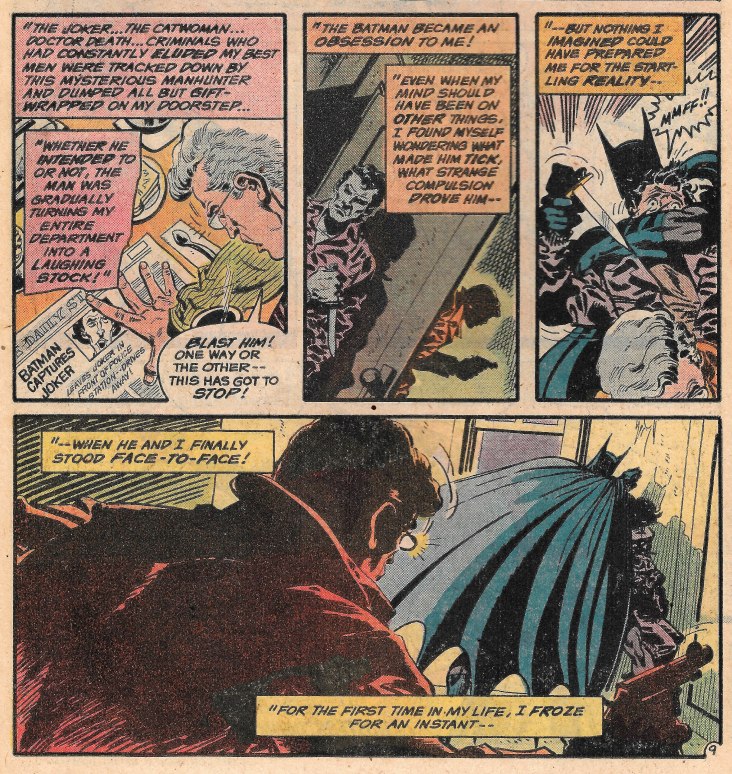 Leading up to Batman getting away, only to slink back in when Gordon was doing paperwork. Jim didn’t seem to take the unexpected visit with a very welcome air. 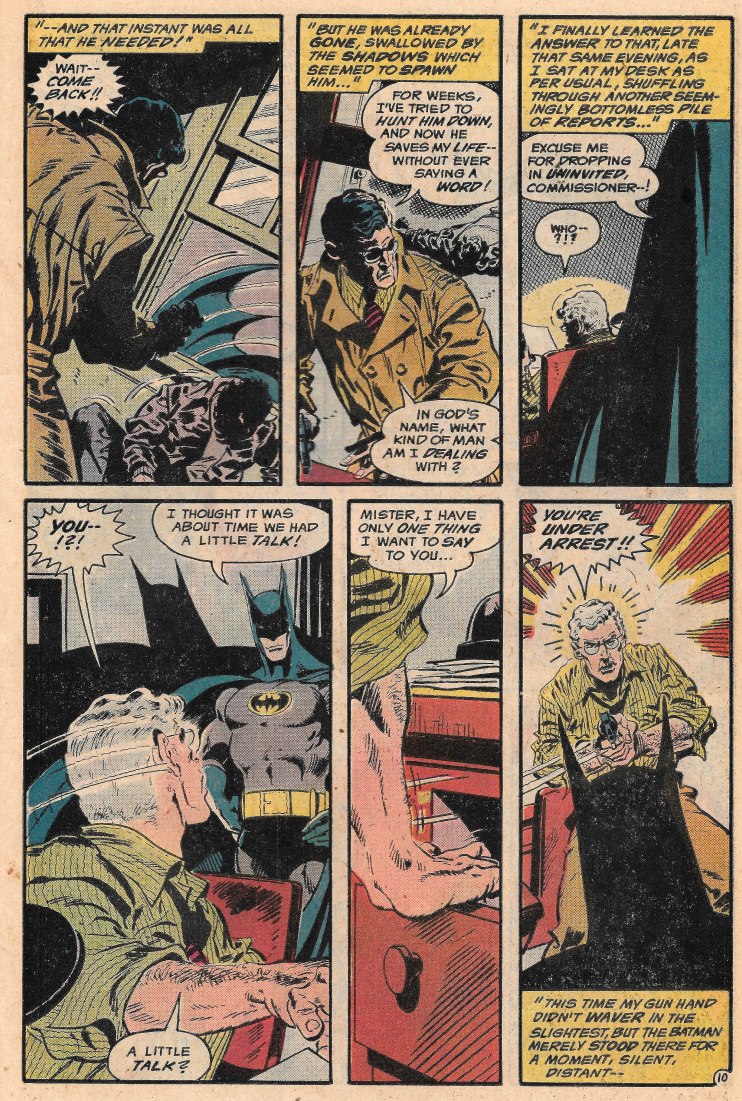 In fact, he used the opportunity as an invitation to stay in a jail cell for the cowled adventurer. 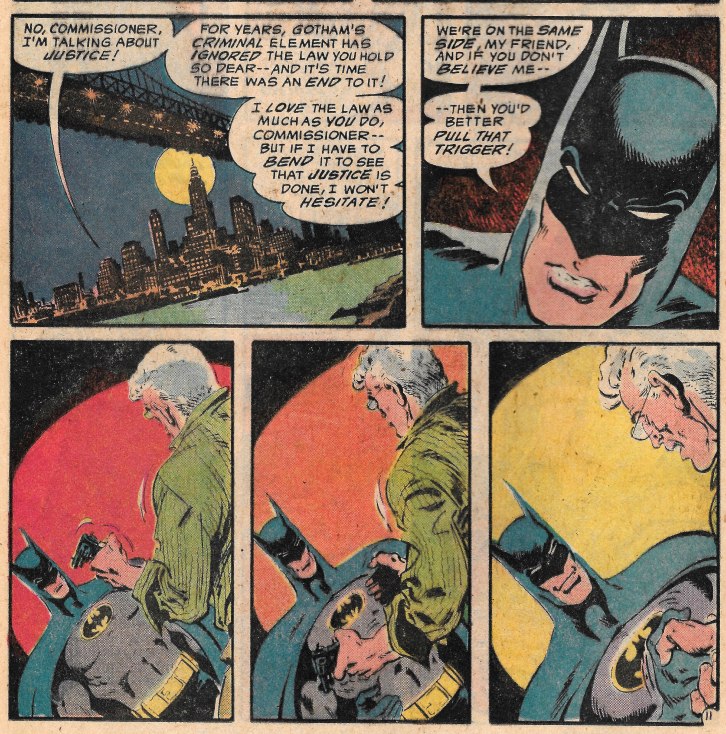 Batman convinces the commish that they are on the same side. And thus many years have passed with the two of them working together to end the spree of various nefarious villains.

And while the effect he had on Jim was astounding, there was one other who Batman influenced even more. 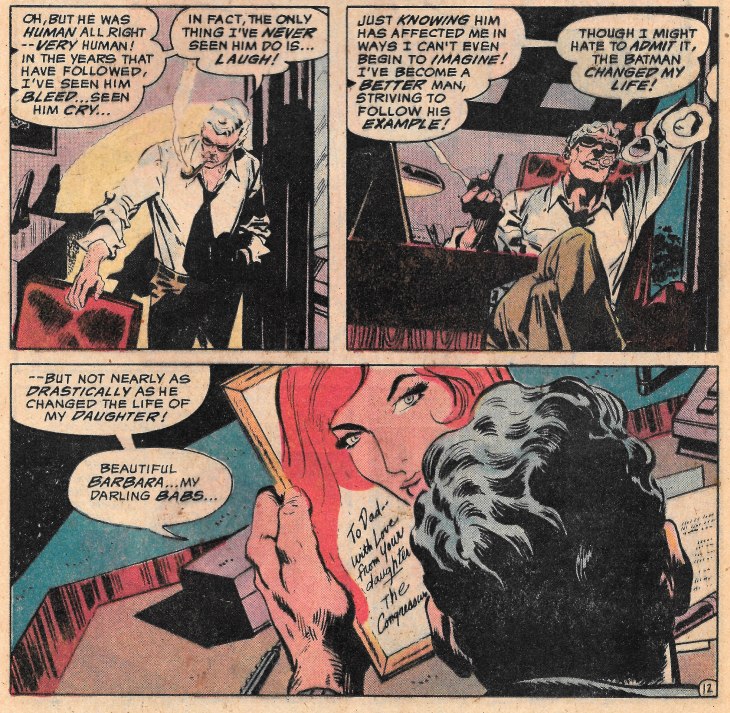 That’s right, Barbara Gordon’s first encounter with Batman was less a meeting than it was her spying on her Dad at night… 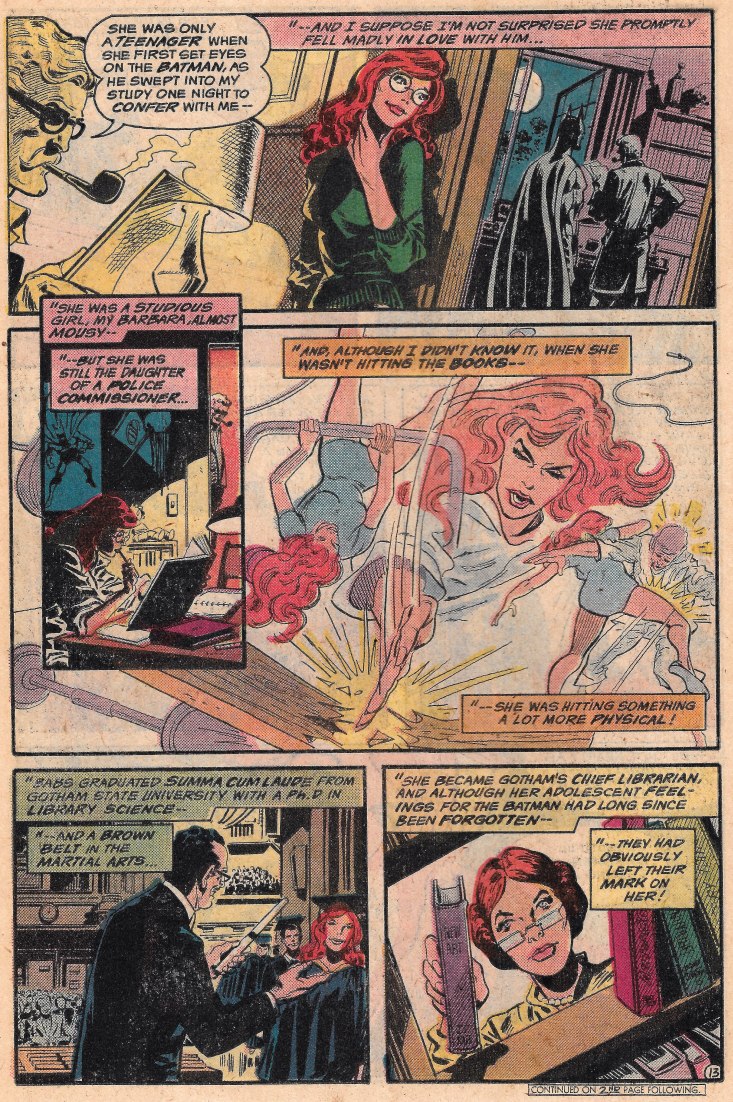 …however, that inspired young Babs to excel at everything, honing her into the amazing crimefighter we soon started calling…well, see for yourself: 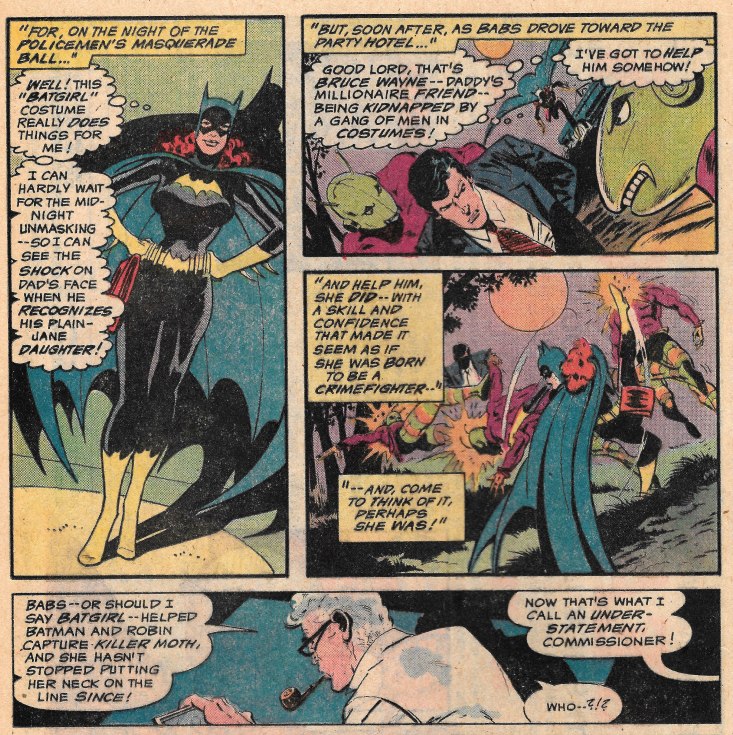 Gordon’s mystery guest is Robin, out looking for Batman. I find it odd that Jim knew his daughter was Batgirl. Is that how it has always been?

Next up is Lucius Fox, who spins out his own tale to a brooding Bruce Wayne. 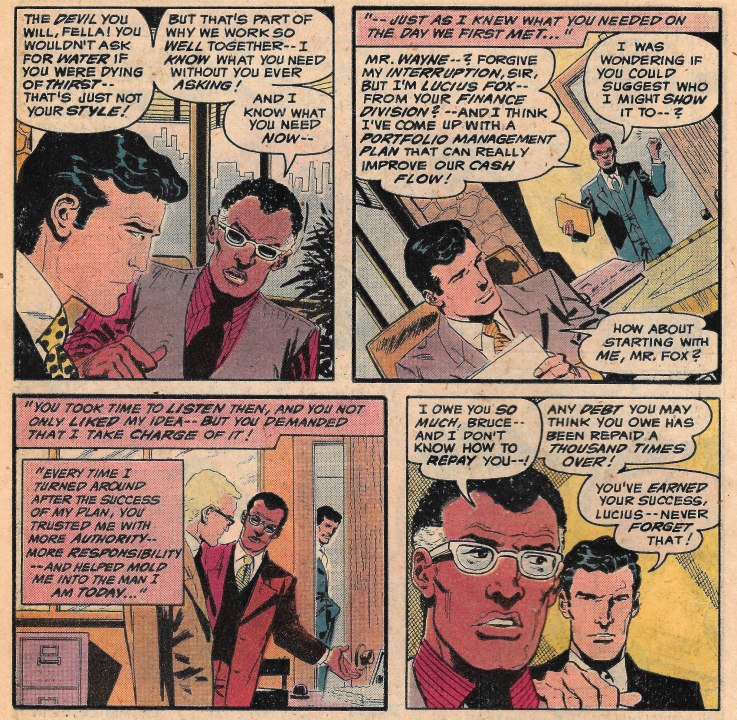 Nice backstory on the character and it leaves Bruce musing alone in his office only for a startling thought to come about when he sees his own reflection in the glass window. 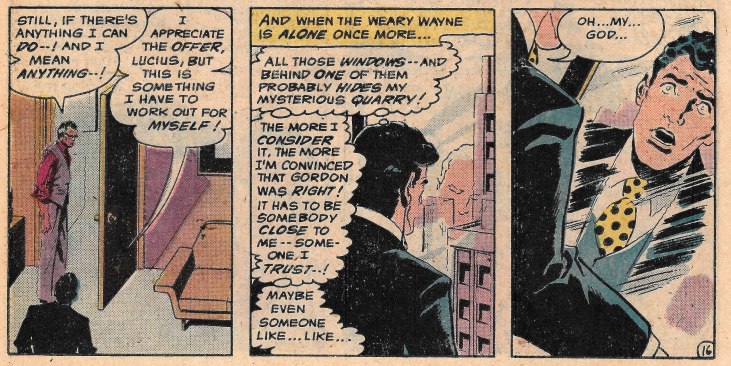 Viewing that reflections leads Batman back to stately-but-abandoned Wayne Manor where he must confront the ghosts of his past. 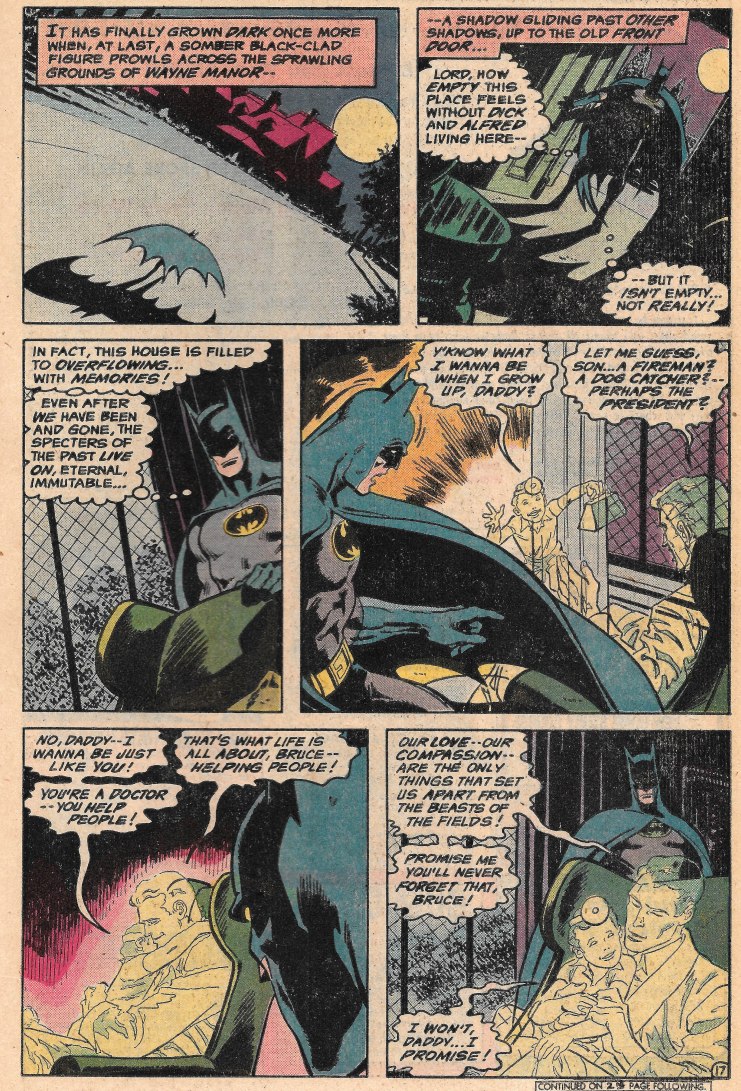 Those are ghosts, right? No? Just memories? Okay, whatever. …where he must confront the memories of his past. Like saying when he was six that he wanted to be a doctor. 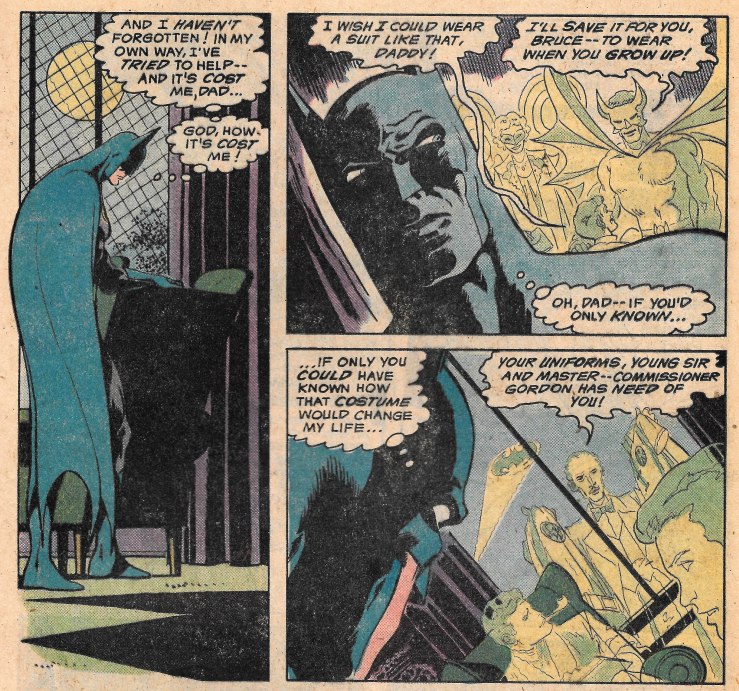 And more memories flood back in, like his Dad saying he’d save the bat costume for him. 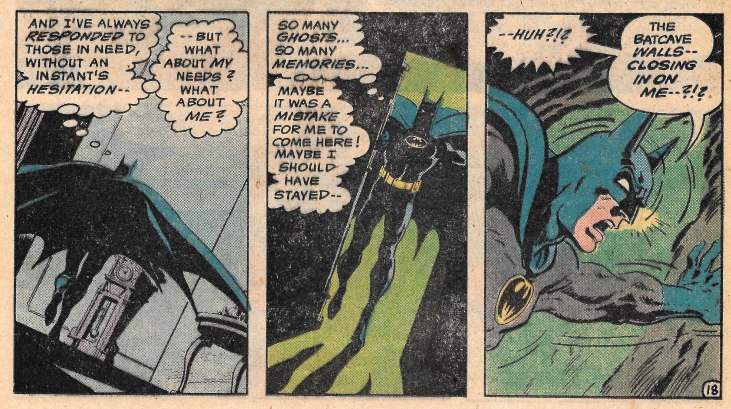 It is all too much for Bruce. Suddenly the walls feel like they are closing in on him.

Or maybe the walls ARE literally closing in on him. Really hard to say here because we suddenly have the answer to who’s been causing all of Batman’s recent problems. And the answer will SHOCK YOU! 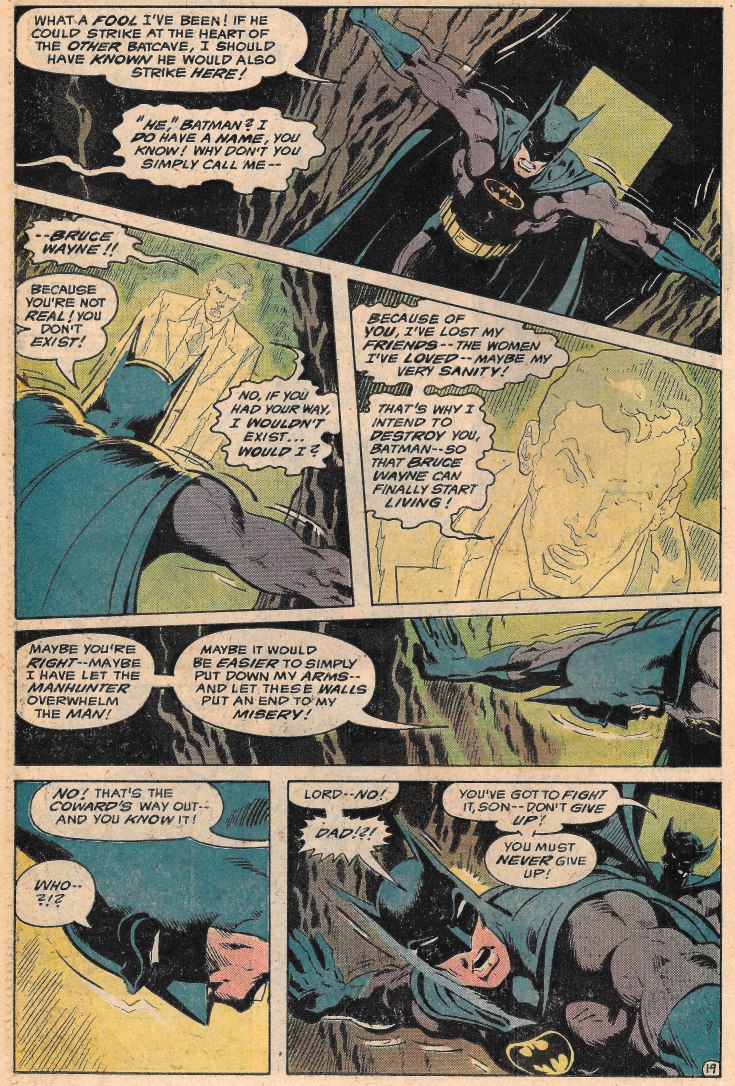 Yeah, take THAT reader. Bruce Wayne was trying to kill Batman all along. That makes sense, doesn’t it. Because why the hell not? And then we get Bruce’s dead Dad yelling him to never give up and to get out of the rapidly closing tunnel walls that are only moving in HIS MIND! Man, what a surprise ending, huh!
Okay book. You win all the WTF’s I have. All of them. Just take them. Take them and go. 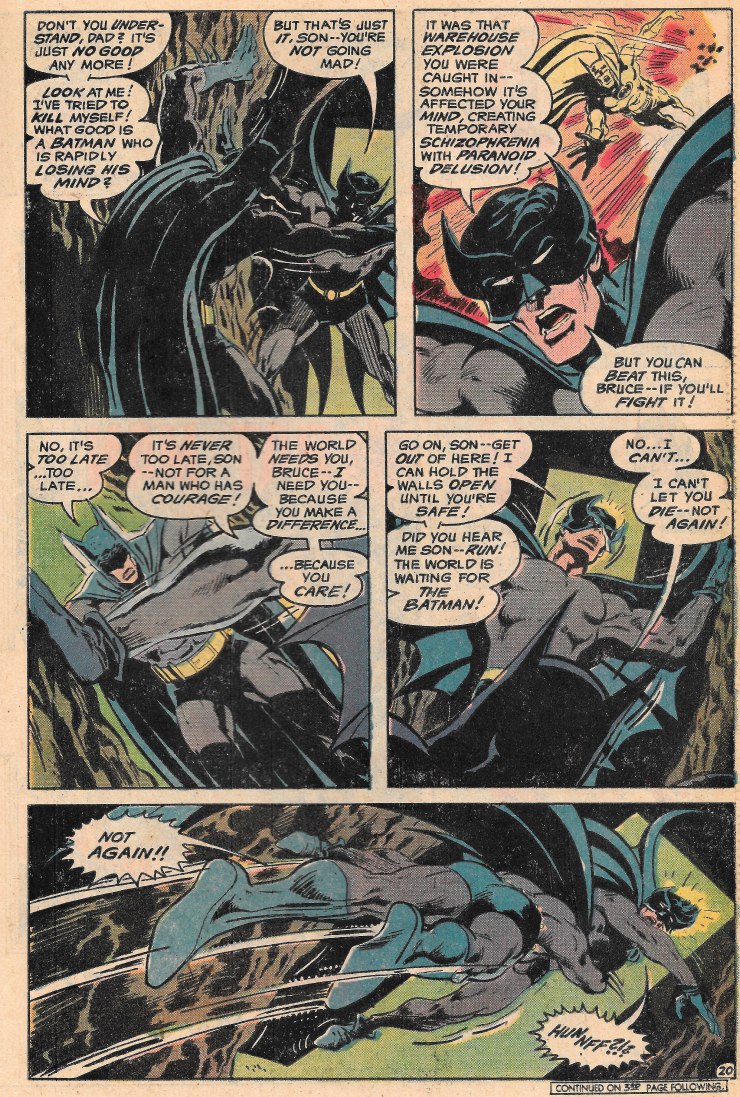 So Batman is officially crazy. I have to applaud the originality of this concept while also wanting to facepalm with both hands. Maybe that’s why this ending has me slapping my face? I don’t know. How do we get Bruce back to being non-crazy is my question, though? Drugs? Intensive therapy sessions? What will make him all better again, because I REALLY want to put this story behind me now. 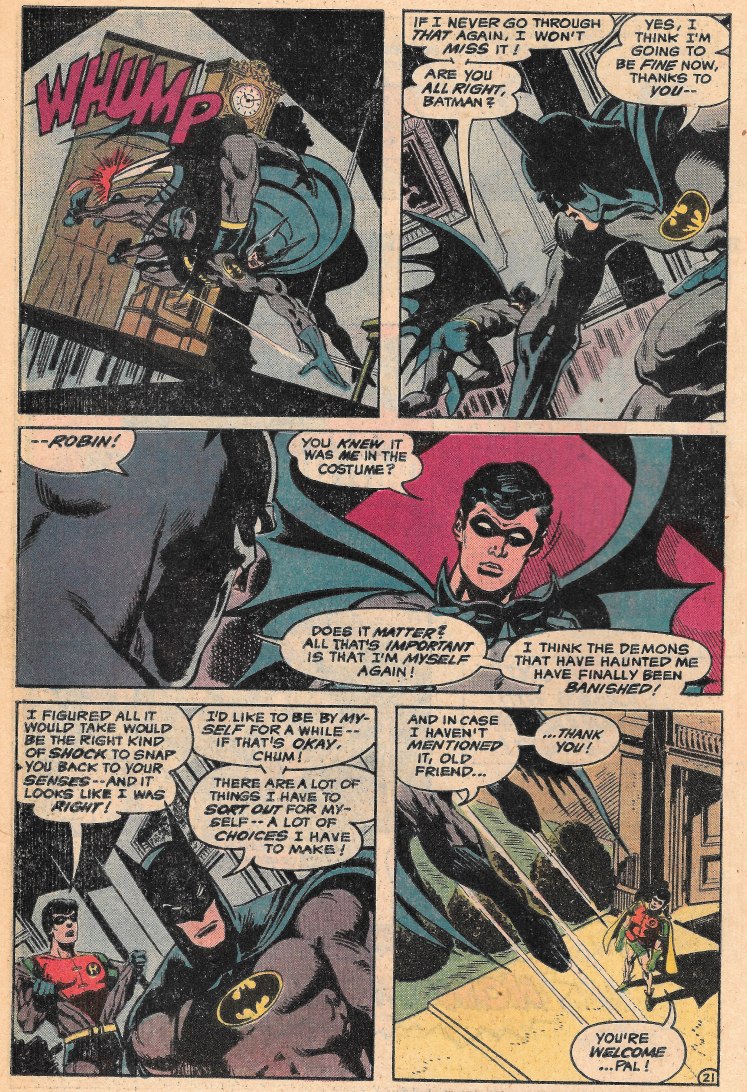 So Robin knew he was schizo? No? He just showed up in dressed in Bruce’s dad’s old Batsuit for shock value? And now Batman is no longer trying to kill HIMSELF? Make this madness stop please. 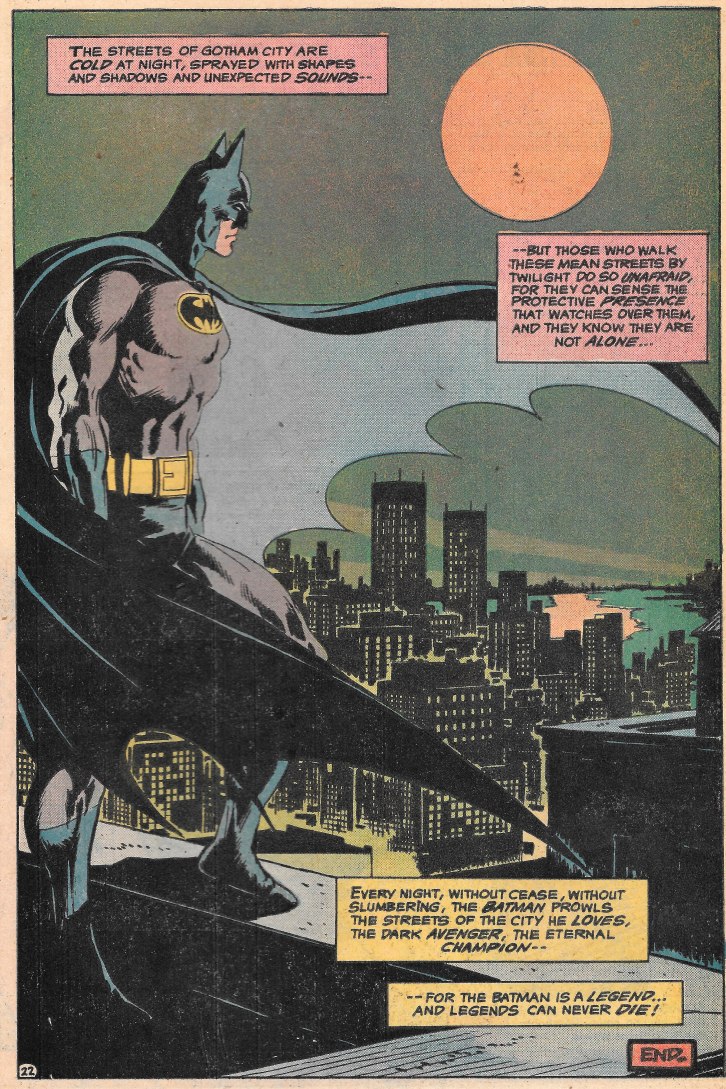 Thank you. Now we will never speak of this story ever again…
Posted by SonOfCthulhu at 2:15 AM