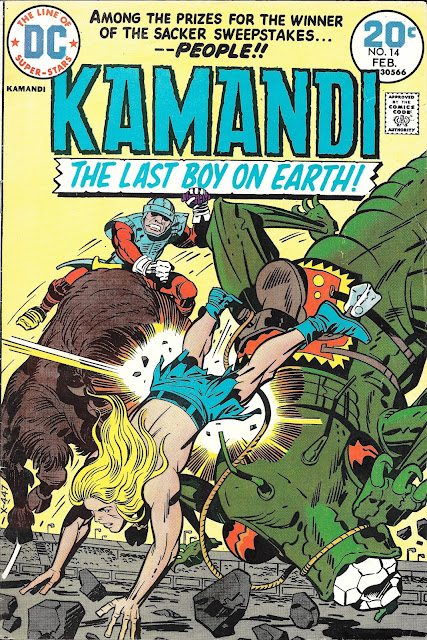 You will cry over a giant bug!

We’ll be getting back to doing work-week Batman coverage in just a bit, but first I wanted to throw out three articles about a very special comics personality that has an upcoming birthday next week.

I’m speaking, of course, about the one and only Jack “King” Kirby.

I’ll share the first Kirby comic I ever read with you next Monday although I bet many of you could guess which book. Until then I am doing two issues that wandered into the Crapbox by way of Half-Price. One of these was selected from their premium book case and ran around $5. Still a steal for a genuine Kirby. The other was bundled in with a bunch of odds and ends. Both are stellar examples of Late Kirby art and story.

His art is brilliant, vibrant and dramatic.

As for his storytelling, there are some rough edges to these that are clearly noticeable. Kirby’s writing is a combination of amazing concepts with some odd dialogue choices. His work is smattered with exposition that feels very “tell”. I’m so glad that Kirby had a chance to do books on his own, because they shore up many of his claims about who did what in his original stories with Stan Lee.

But enough about that, it is a story for another time. Right now our story is Kamandi, the Last Boy on Earth, issue number 14.

For those of you who know nothing of Kamandi, allow me to fill in some backstory. I’ll admit that I wasn’t as familiar with this character as I am with most of the DC in continuity characters, but I’ve read up on him to fill in the blanks. Kamandi, the book, takes place in the post-apocalyptic future where an even called “The Great Disaster” has reduced man back to savagery and given rise to all manner of highly evolved animals. A sort of a “Planet of the Apes” that’s just a bit more inclusive. 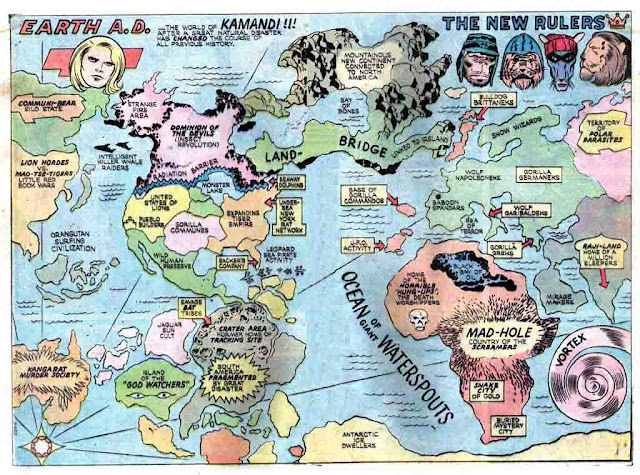 Into this wasteland steps a young boy with flowing locks of blonde hair named Kamandi. His name is derived from the bunker he has lived his life in, a shelter called “Command D”. He emerges near New York City after his sole caregiver, his grandfather, is killed by a wolf. The Command D bunker had volumes of tapes of the Earth before the disastrous event took place, so Kamandi has some rudimentary knowledge of how things were, but not how things are now. Kirby uses the boy as both a philosophical sounding board and as an action hero, but he inhabits a bleak future that even viewed through today’s nihilistic times, seems excessively dark.

In fact, the book came about because then DC editor Carmine Infantino tried to get licensing to make Planet of the Apes comic books given the 1968 movie series’ popularity. Unfortunately he was turned down, so he gave Jack Kirby the task of creating something LIKE Planet of the Apes. Kirby hadn’t seen the films, but had a story published called “The Last Enemy!” that was similar in concept that predated the original PotA’s novel. He also has an unused strip called Kamandi of the Caves that he’d been hanging on to for over a decade. He whipped up the original story from these elements and due to the cancellation of his Forever People book, he eventually was put on as artist too.

This issue begins with Kamandi engaged in a gladiatorial race against a single adversary. The story follows a continuation from last issue, I’ll assume, where there were many competitors but now we are down to Kamandi, his mount and Bull Bantam, who currently has the Last Boy on Earth entangled in his lasso. 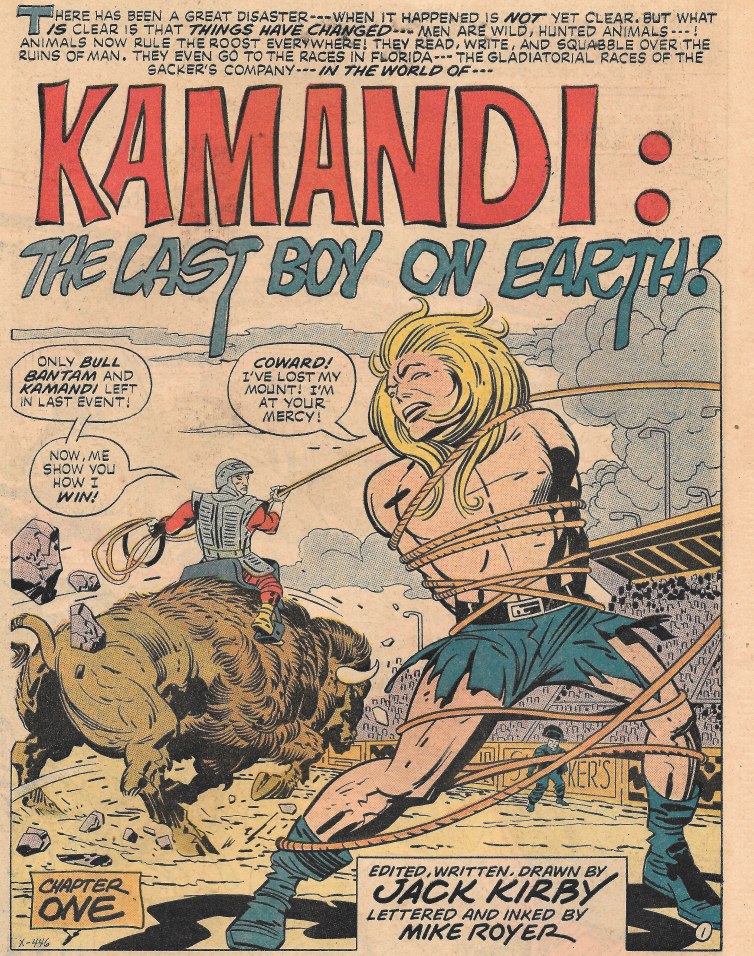 However bad, Kamandi has it, he’s far better off than the other racers here at Hialeah Park. I’ll leave it up to the text boxes on this splash page to explain the rest. 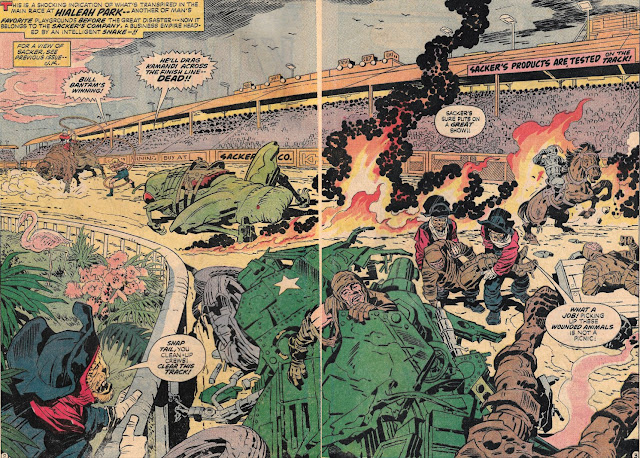 In stunning shots, we see Bull Bantam’s cruelity as well as the elements that made Kirby’s house style the Marvel staple for many years. His leap off the page characters and clear storyboarding need little dialogue to convey the action. 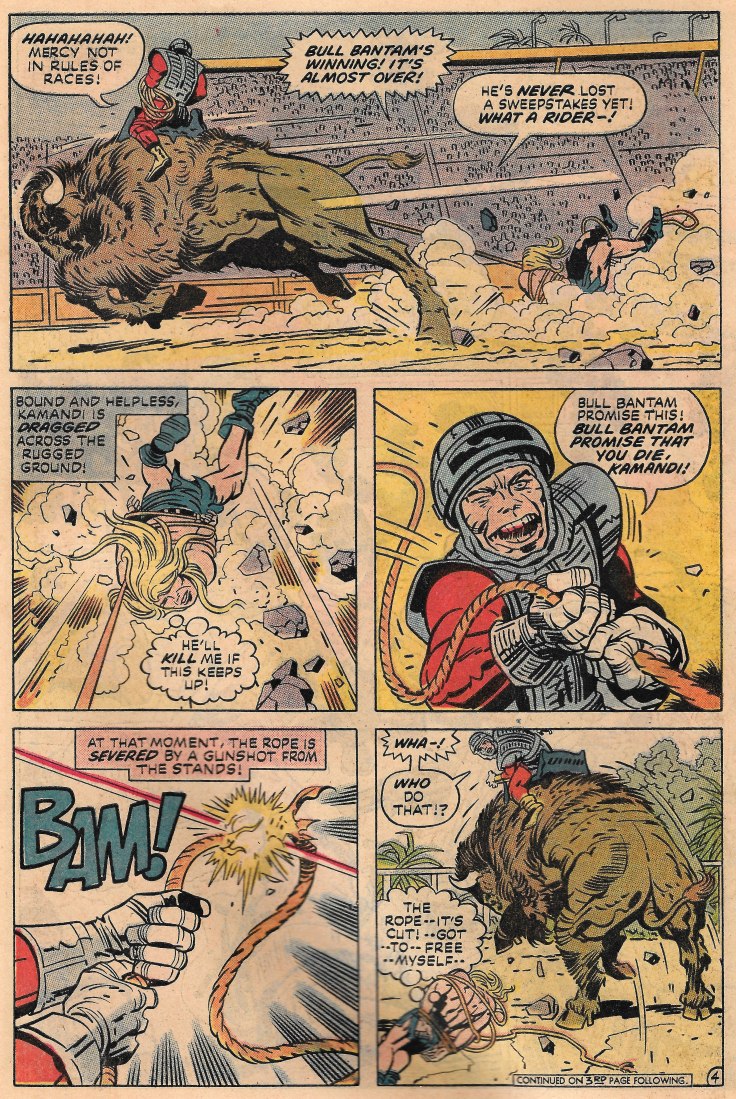 Unfortunately, Kirby’s one weakness appears here too: dialogue and exposition. The box where Kamandi is being dragged could be removed with no effect to the panel or what it conveys. Likewise, the gunshot declaration box. And we know Kamandi would know to free himself after. It is criminal that he was allowed to edit his own stuff, in some small way, because an editor might of tightened up the wording a bit or reworked it. Or in a novel idea of the day, removed it entirely and let those panels show more of Kirby’s wonderful art. Shame.

Still, the story is Kirby’s and it is told the way he wanted, warts and all. And unlike say McFarland’s Spider-Man title, this is still a story I want to see played out. It might make me wince or shake my head at a line of dialogue, but there is still a good, grounded tale with a likeable character facing adversity. I have someone to root for as we’ve shown Kamandi as our underdog who isn’t Superman nor full of himself. We’ll get to know him even more by issues end, but for now, he has to regain his mount before Bull Bantam gets another rope around him. 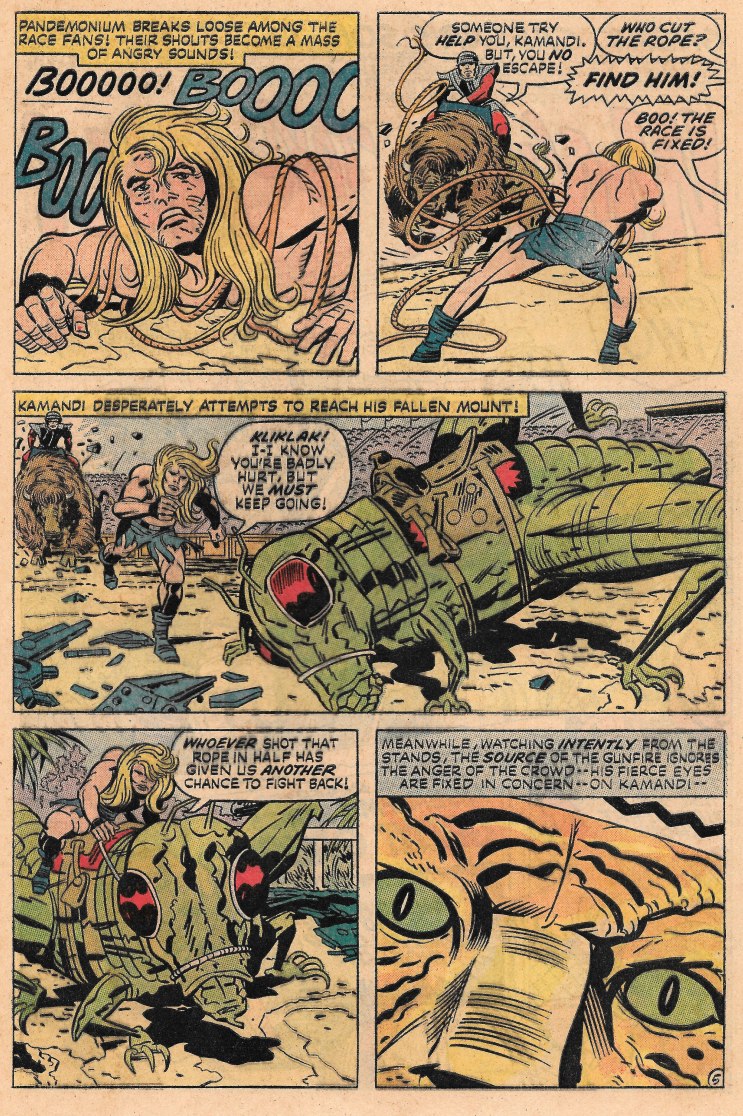 And he does! His mount is a giant…grasshopper? That makes the ones found in the Texas panhandle look small. We also get a glance at Kamandi’s savior, a Tiger-gent who is somewhere in the rapidly growing angry crowd.

The tiger guy is a the son of a rival warlord, Great Caesar. Prince Tuftan dares anything to rescue his friend Kamandi be killed, which put him and his entourage in a bit of a pickle as we head into Chapter Two, Winner Take All! 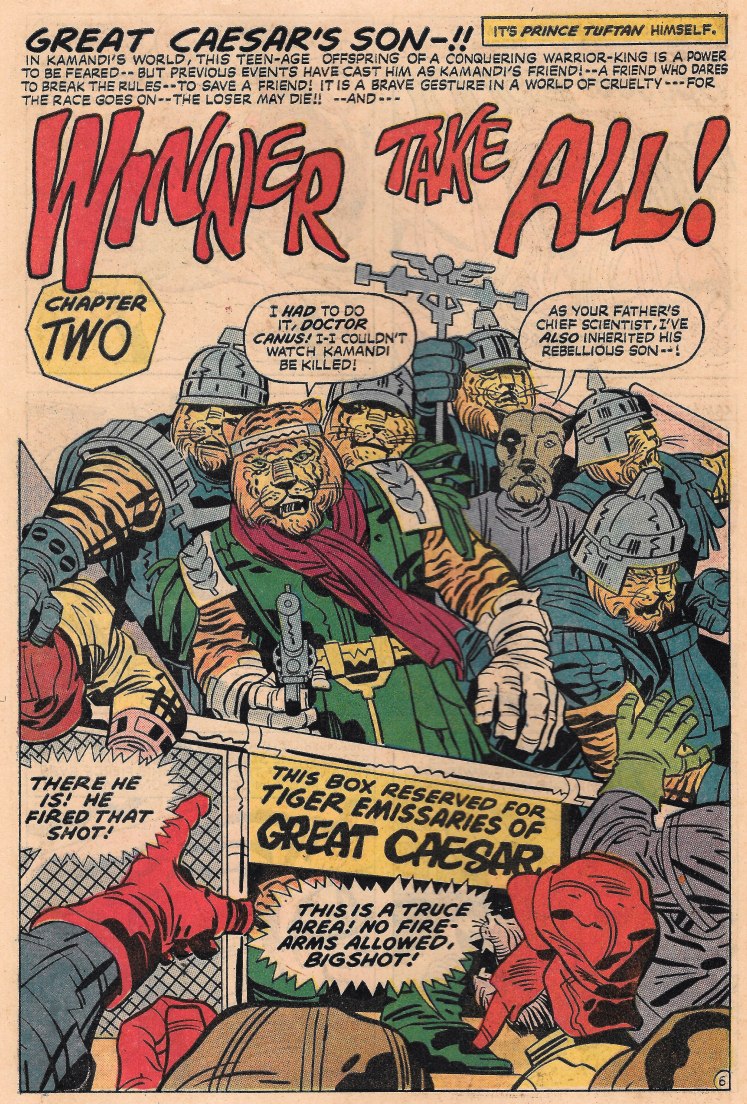 Love how Kirby’s books used to do this type of breaking up of the story into little bits like actual novels. It gives the narrative a weight, that, even if it isn’t earned, I find fun and refreshing.

Tuftan and his science advisor certainly aren’t having fun, however. Sacker, the owner of the raceway, has heavily armed guards on hand to quell any disturbance in the crowd. 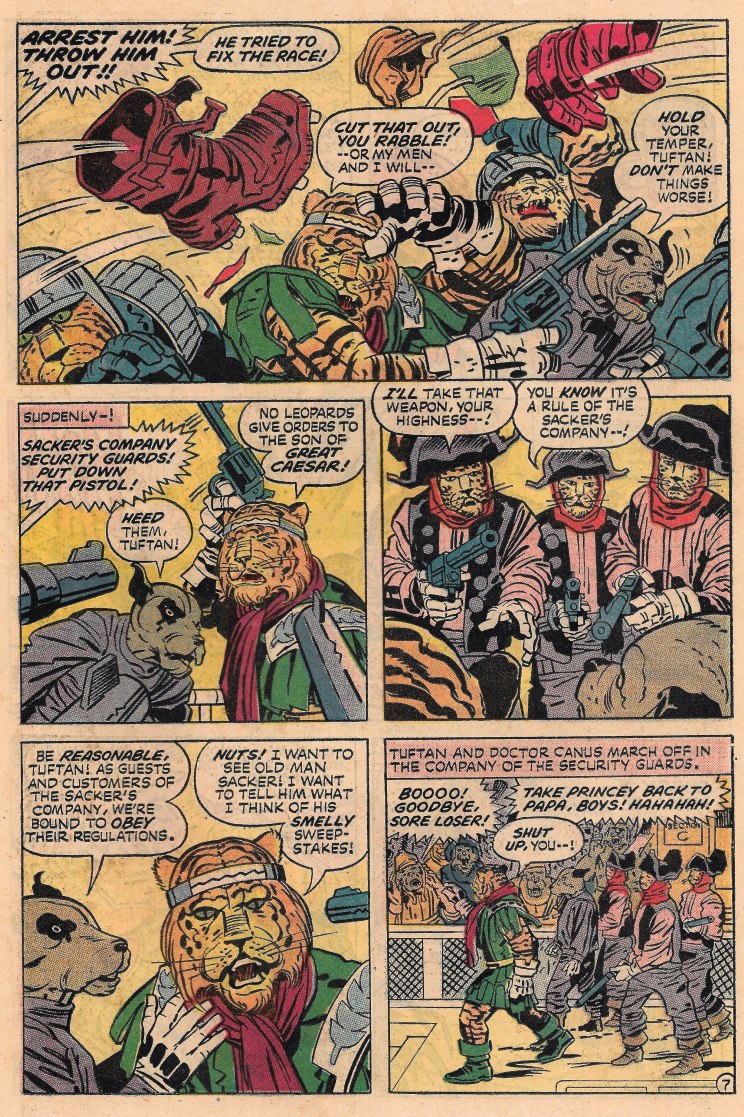 While Kamandi’s friend is led away to an uncertain fate, the star of our book looks to be in even worse trouble as Bull Bantan’s Buffalo Bashes the last boy’s bug. 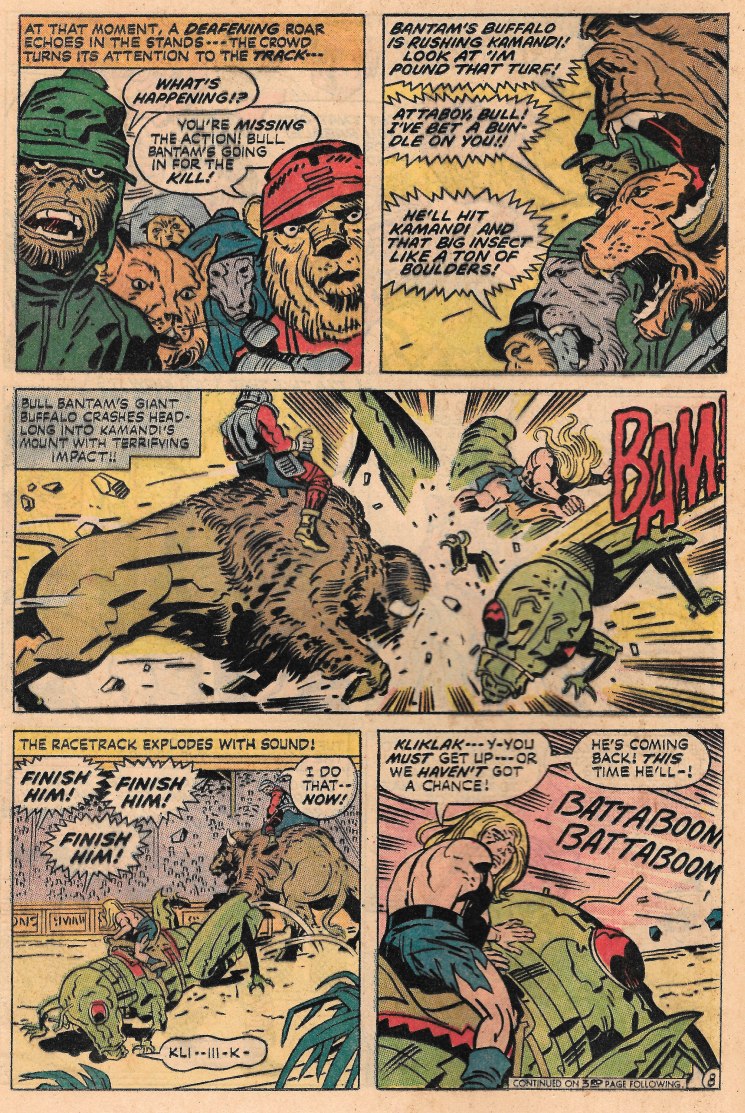 It looks to be all over for Kliklak and Kamandi… 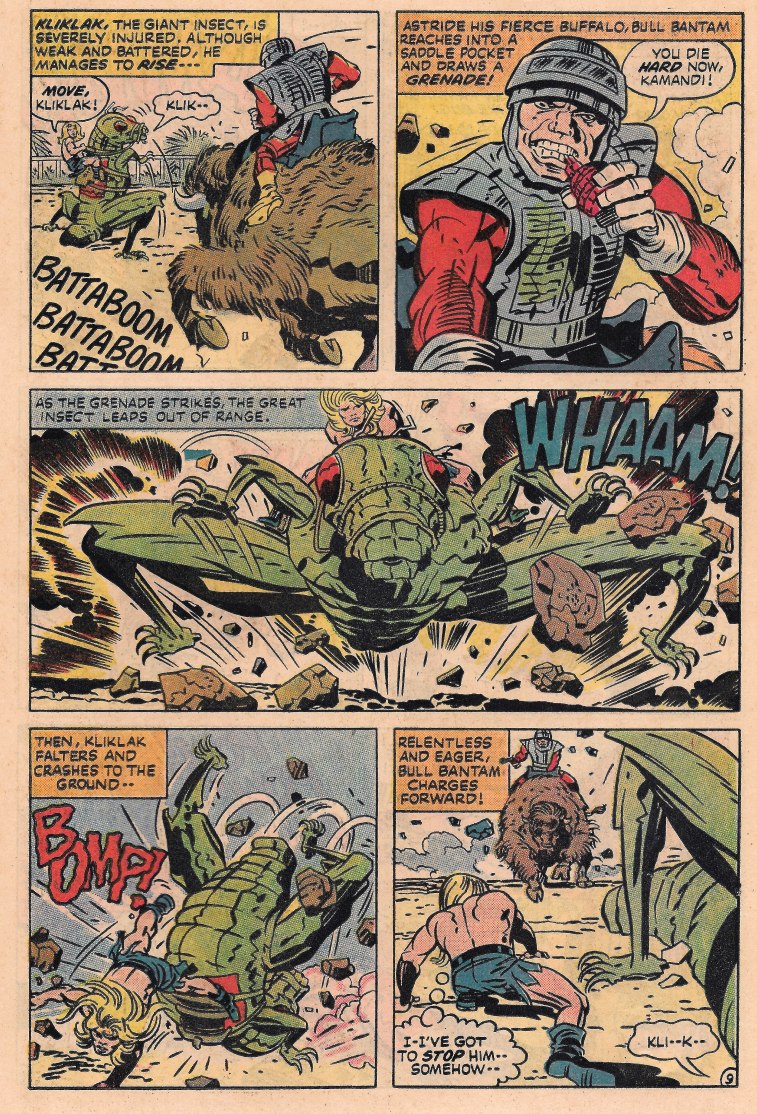 …especially after this last jump to avoid the blast radius of Bull’s grenade. 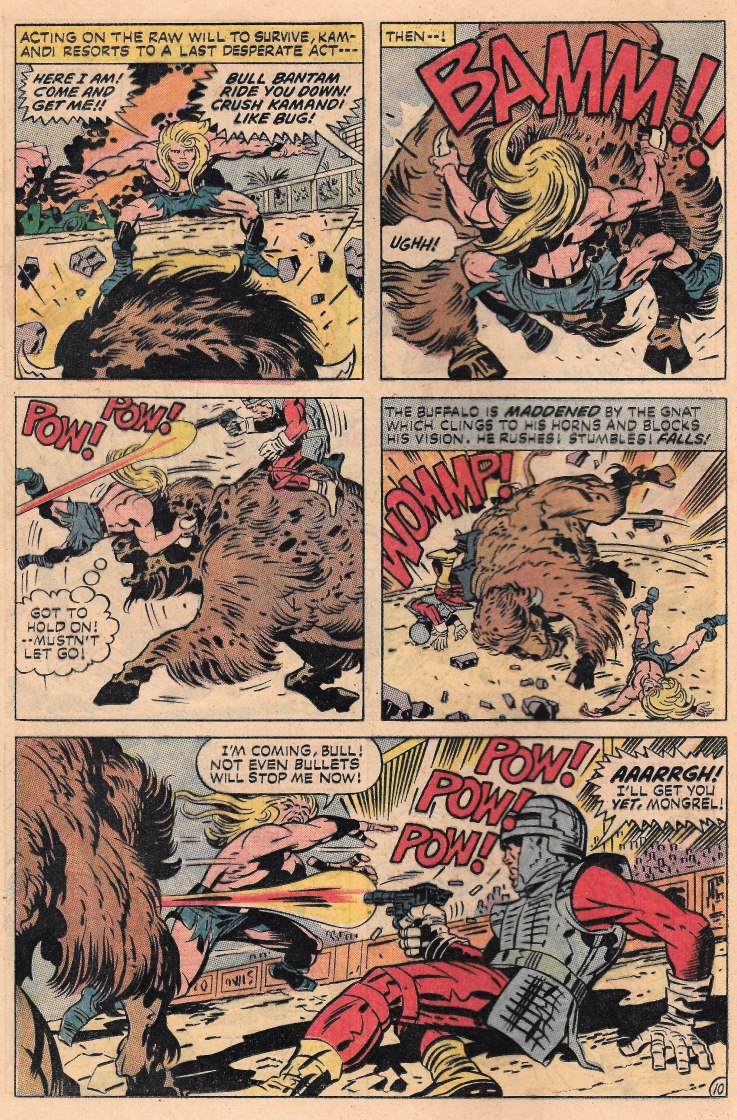 Kamandi proves to have too much heart to go down without a fight. His determination proves to be too much for Bantan’s ride, who stumbles and bucks Bantan off. 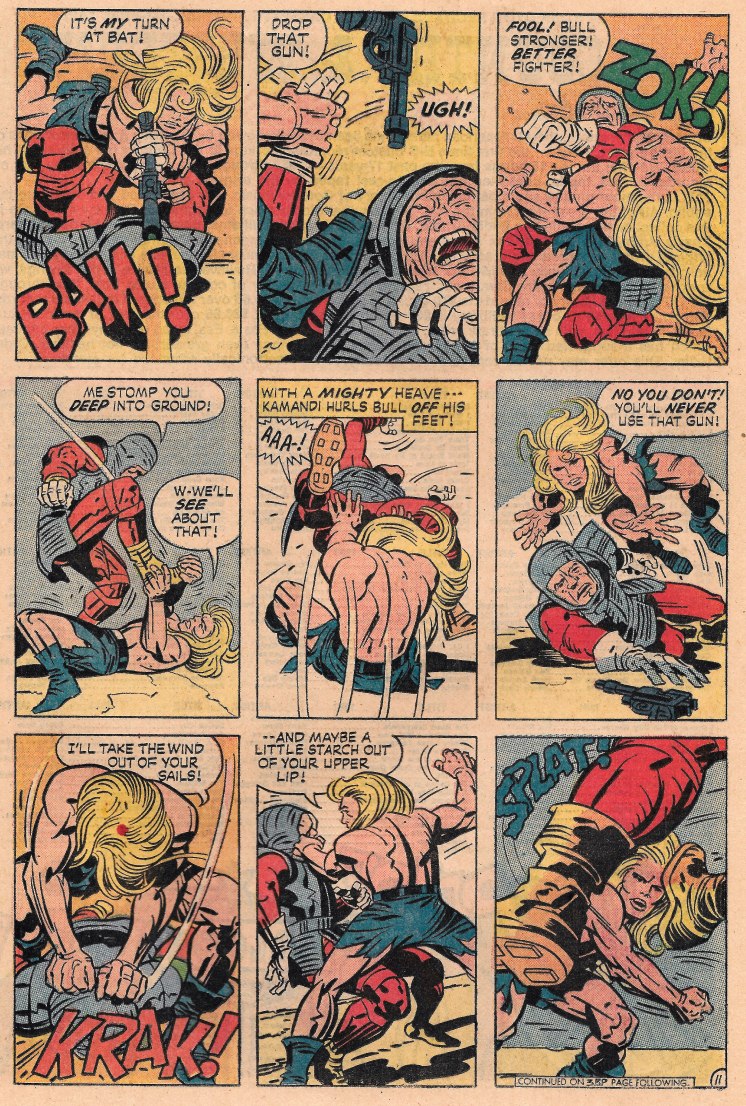 As Bantan resorts to shots at close range, Kamandi dodges and then disarms his moronic adversary. In the brawl that follows Kamandi comes out on top. These nine panels, any of which would make a wonderful poster by themselves, overflow of Kirby’s amazing sense of proportion, foreshortening, and power. The master at work.

As Kamandi triumphs, the crowd goes wild for his thrashing of their champion. 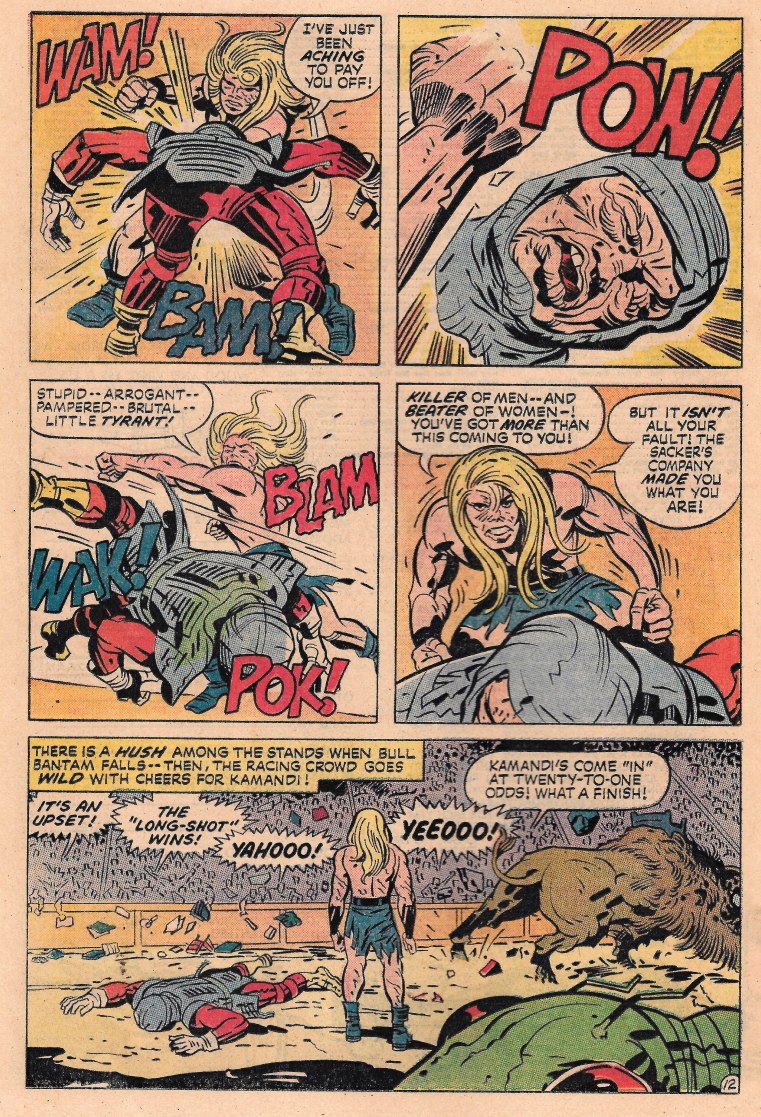 Which just makes Kamandi even more upset that the world he lives in is the brutal existence run by animal people who apparently have no moral center. However, if you can’t get emotionally worked up for any of this cast of man animals, Kirby does a great job of tugging on our heart strings over the VW Bus-sized grasshopper Kliklak, who is so sorely wounded that he must be put down. 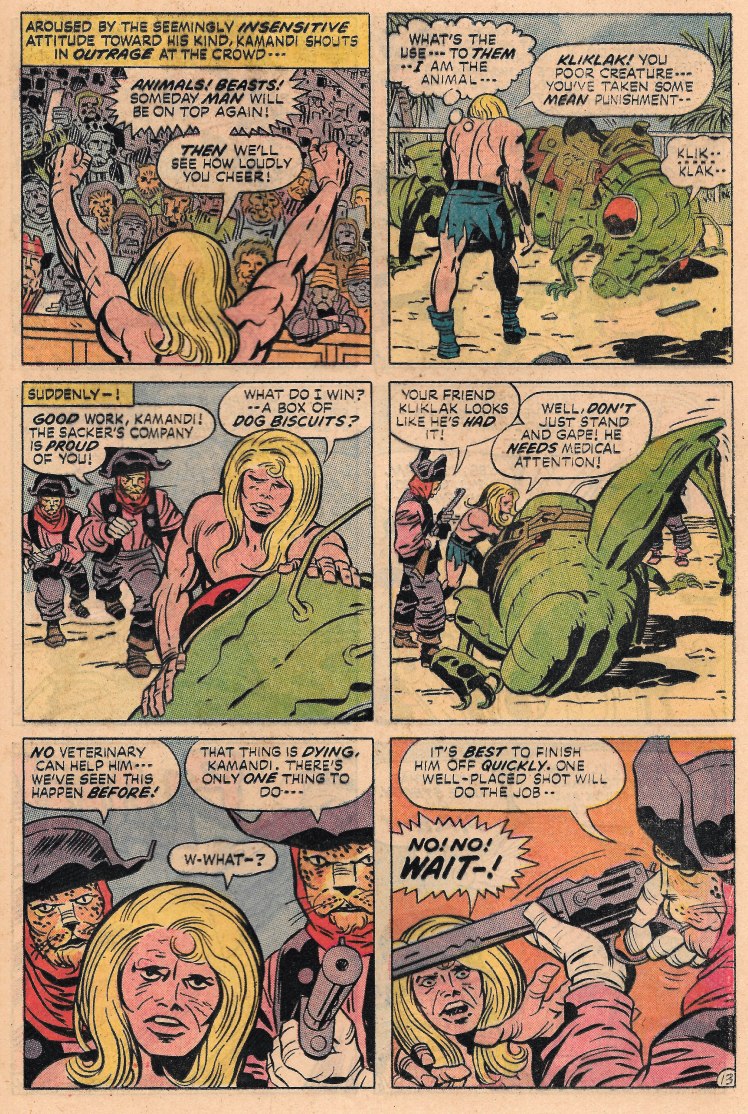 At the last moment, we believe that Kamandi has come up with a solution that will save his insect buddy’s life. But no, it is not to be. Kamandi is merely Lenny putting down his dog after a tearful farewell. 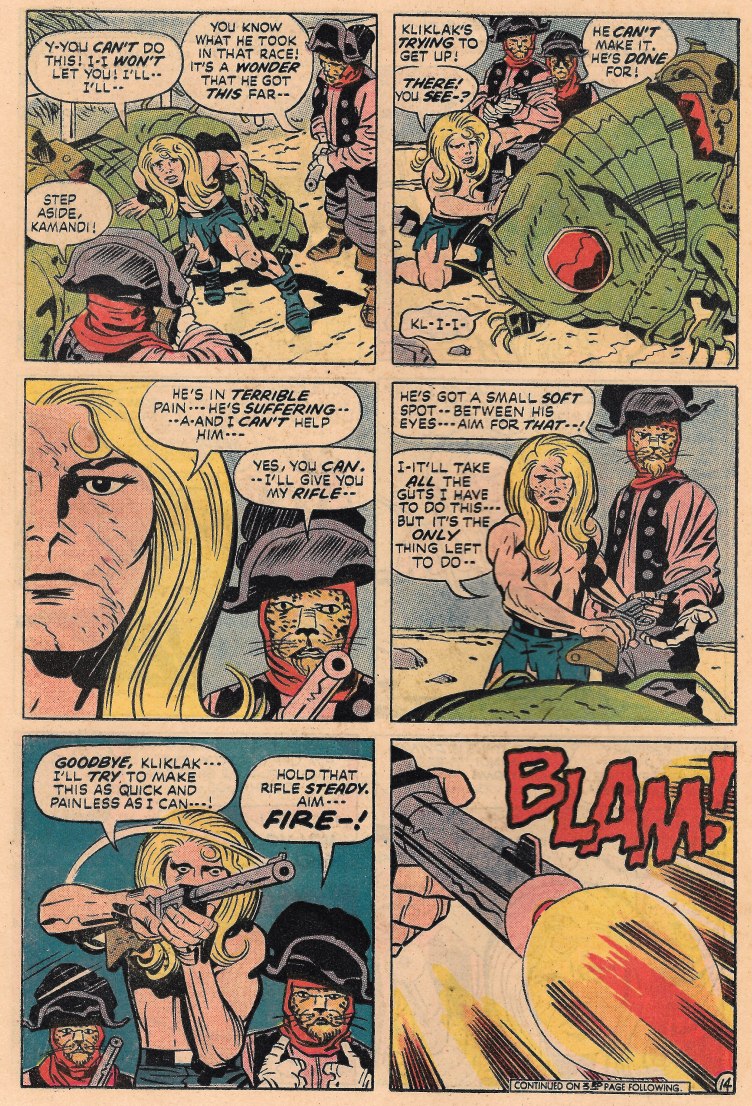 Damn it! I can watch entire legions of Skrulls get killed, but one give me one giant grasshopper with the personality of a loyal dog getting put down, and I blubber like a 3 year old…I swear! 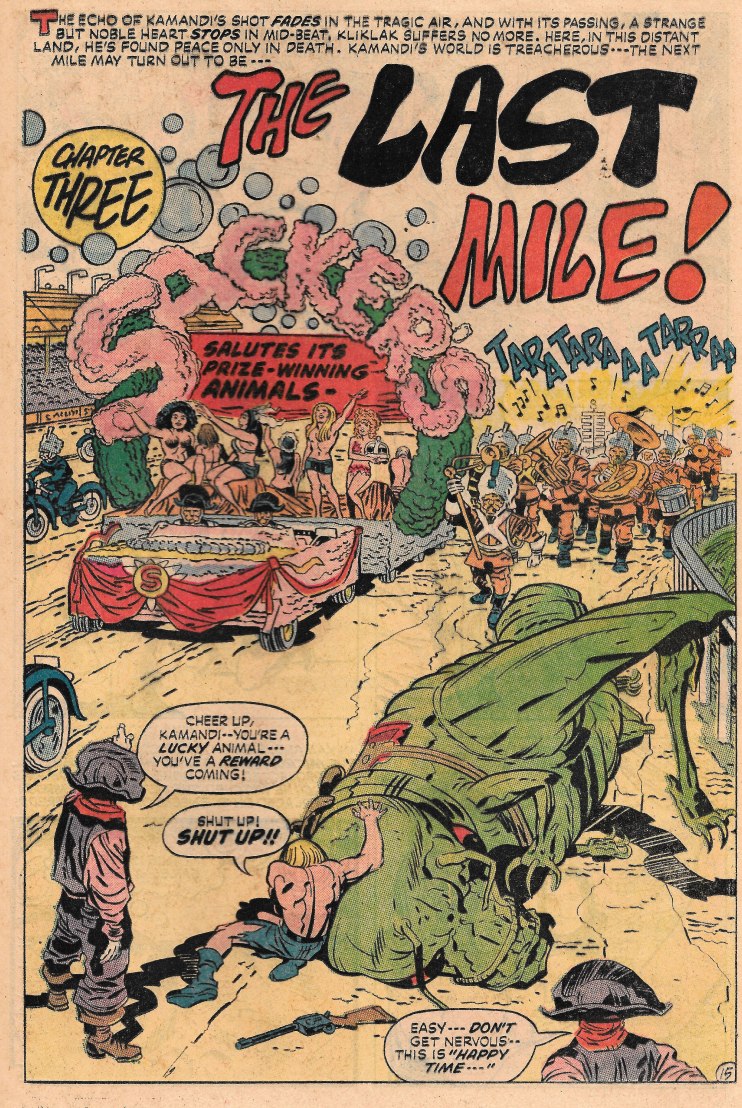 Kliklak’s sacrifice won’t be in vain, as Kamandi is inconsolable. And an depressed but morally righteous hero will always take on the established corrupt power structure, as demonstrated below. 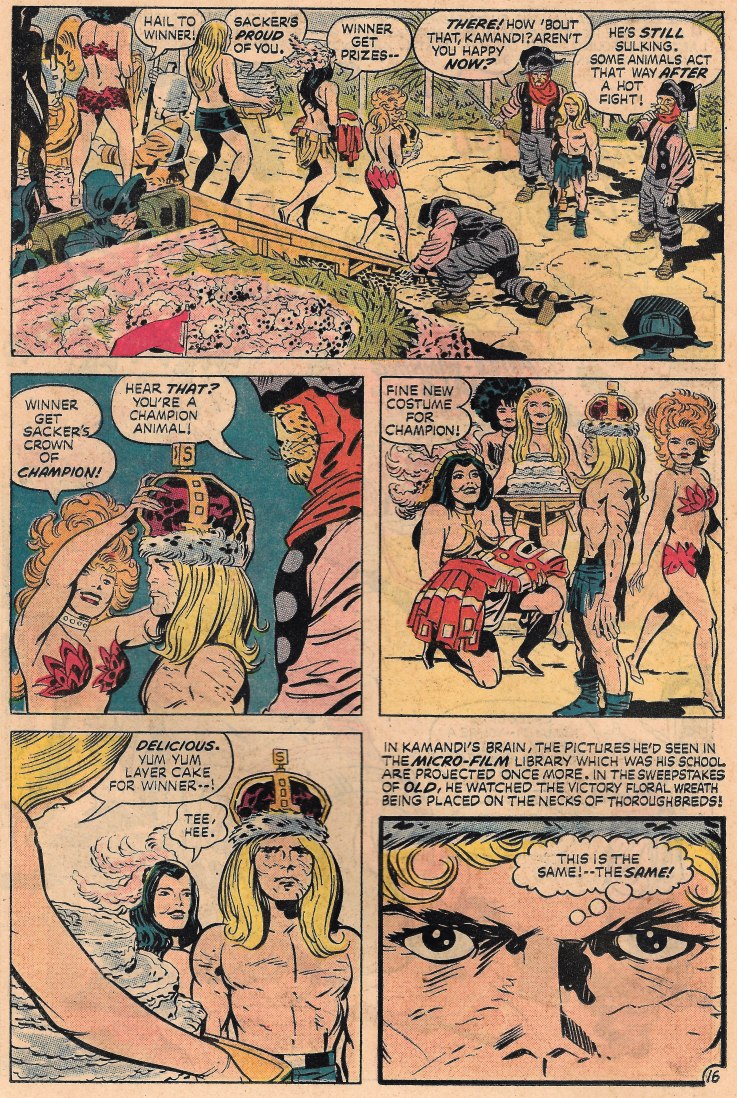 It starts with Kamandi realizing that he is little more than a talented pet to these animal-men. 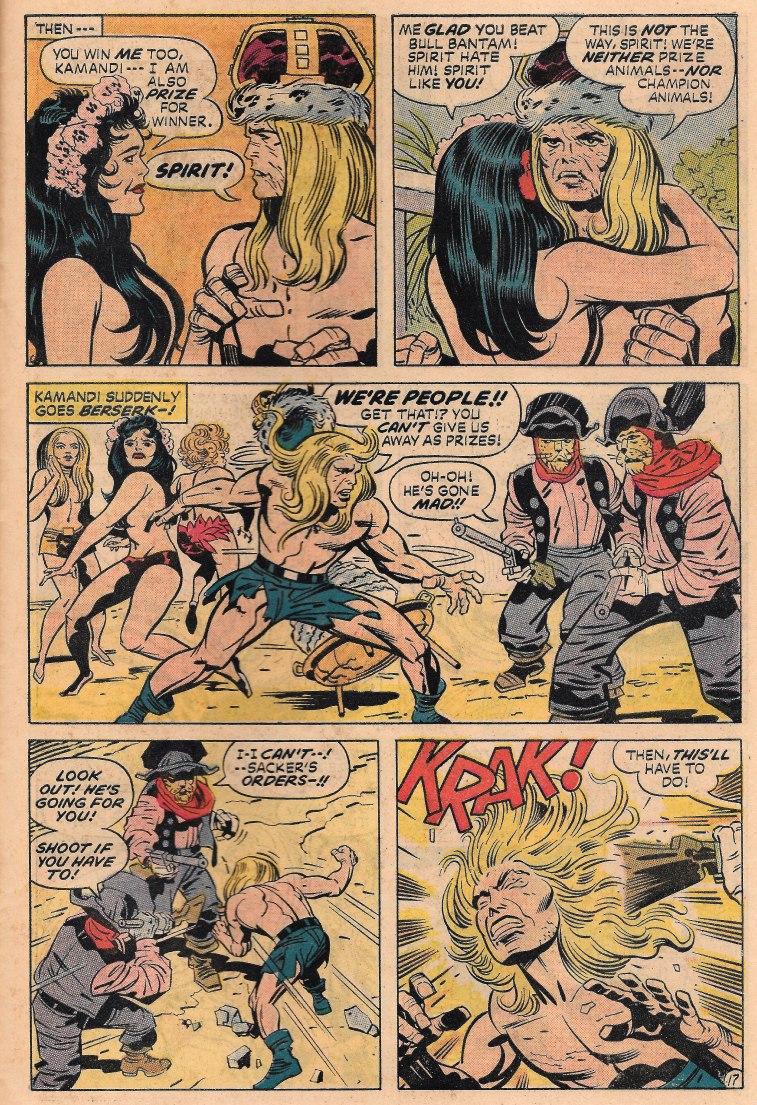 He almost succumbs to the charms of the lovely and innocent Spirit, but then pulls a full-on Charlton Heston. Unfortunately, that just gets him the butt of one of the panther people’s rifles. Seems that’s a common reaction among the humanimals, as that's exactly what Heston got too.

Luckily for Kamandi he still has a few friends with influence. 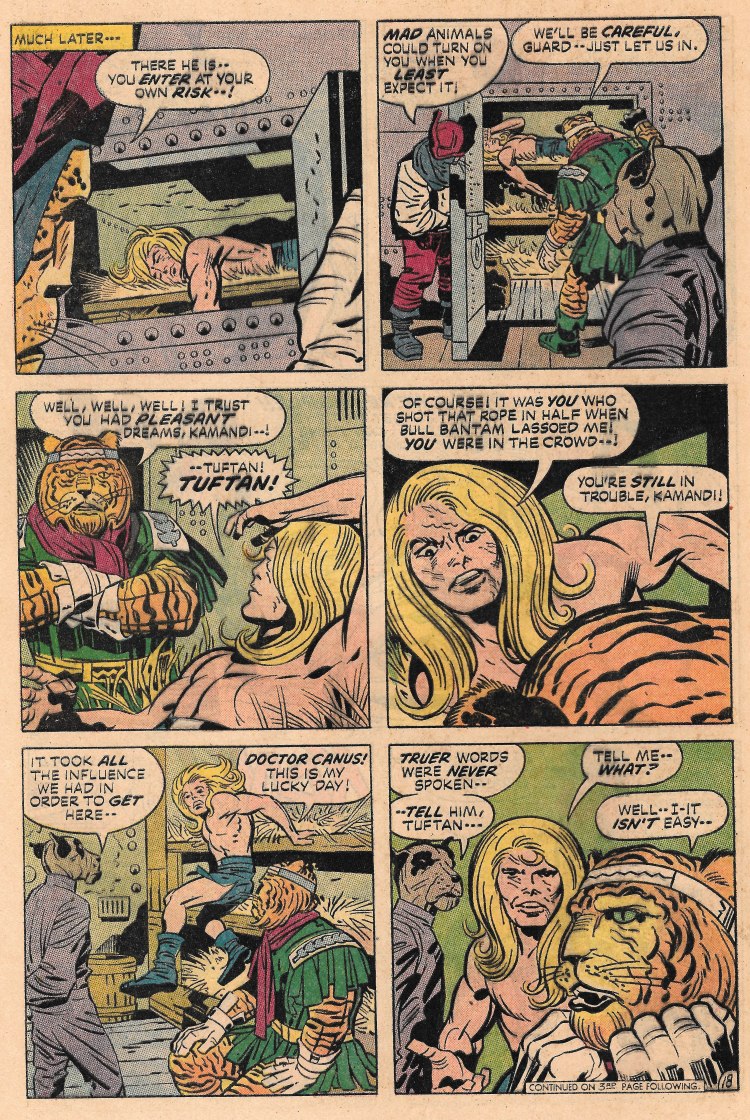 Influence they use in his favor to bargain for his freedom, but at a cost that Kamandi might find a bit steep. That’s left for the next issue however. 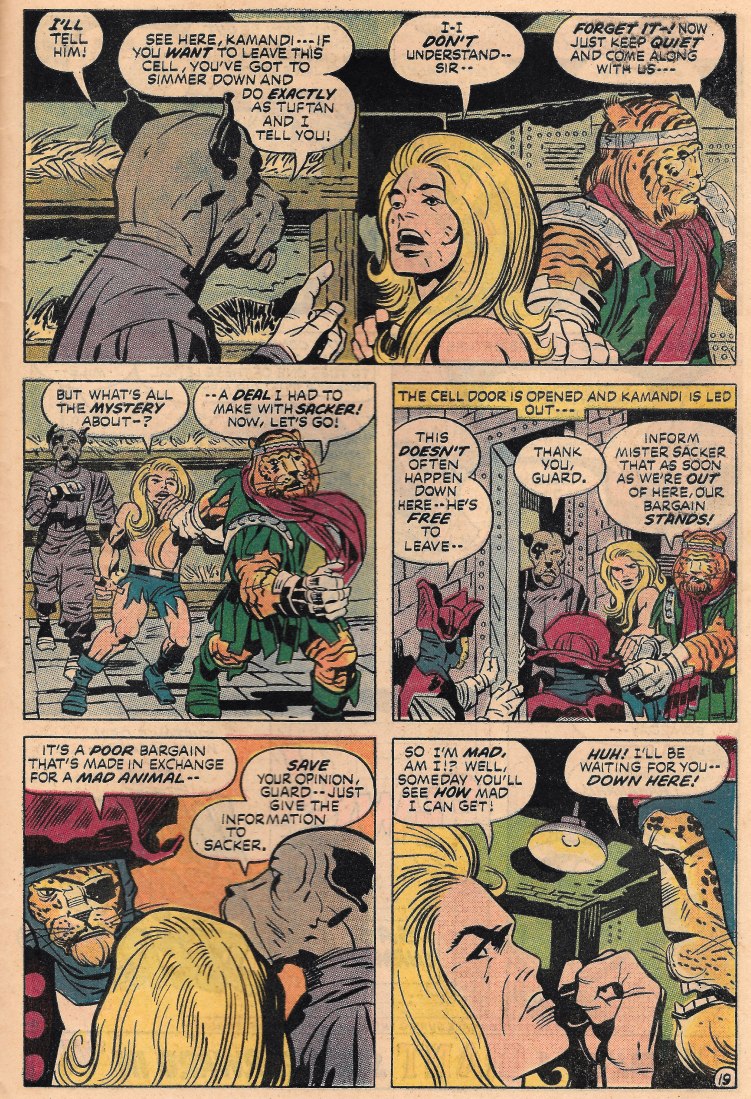 As they leave, we have this expository reveal... 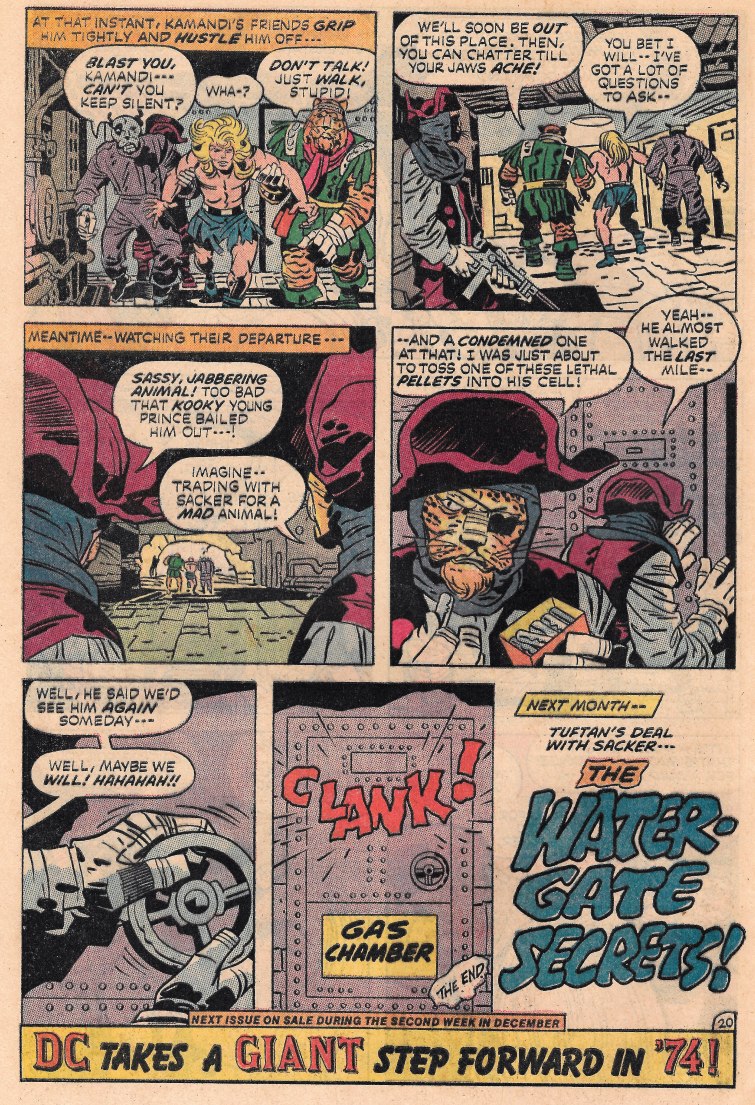 He almost bit it! Nice ending.

I can admit that I don’t feel a great vibe for the character or setting of Kamandi, but I do love the art. Jack’s dialogue can sometimes be a bit much to take, but I found his more restrained hand her agreeable with the story he was weaving. There were a few bits of expository dialogue that I though unnecessary or leading, but all in all, I enjoyed Kamandi and would pick up another if I saw it at a reasonable price.

The art alone makes them worth the find.
Posted by SonOfCthulhu at 2:38 AM