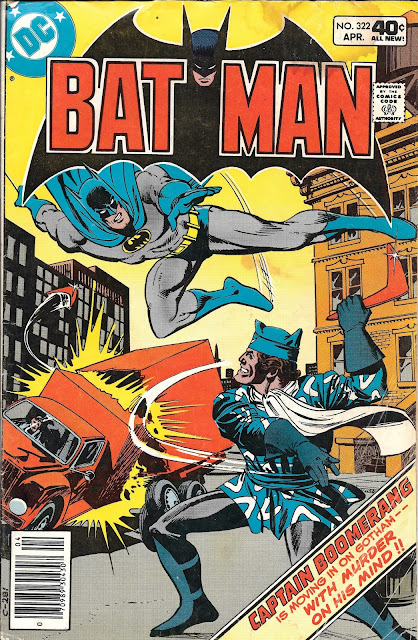 Captain Boomerang is what I would consider a “failed” villain.

Now all villains fail, so I better define what I mean by that. Captain Boomerang is a villain that isn’t menacing, scary, or relevant. When you see him on an issue’s cover or shown on the splash page, almost immediately feel relieved for the hero of the book. Look at you, Batman. It is a superhero version of a bye week in football. He’s not a threat. He never successfully does anything.

But to really understand the character of Captain Boomerang, you have to know his backstory:

So now with his background out of the way, we can get on to dealing with this issue. Oh! And when I said he had never done anything successfully I was wrong. He was killed in Identity Crisis, so I suppose we could state that he successfully got himself murdered.

For a time his son took over as Captain Boomerang, but he had actual speed powers and a personality beyond just an Australian accent. DC said THAT ain’t what audiences are looking for and erased him from the scene after the Blackest Night event, bringing back the original.

Digger is a founding member and staple of the Suicide Squad although I’ve never heard anyone say he’s their favorite part of the team. Mostly I think he’s the guy we are all hoping will die, but DC knows if they don’t kill him, we’ll keep buying the issues in hopes he finally bites it. At least that’s what I’m rooting for, anyway.

It has to be his weapon of choice. An arrow, you aim that shit at people. But a boomerang, you kinda generally throw and hope it somehow connects with something either coming or going. And while Digger, like Green Arrow and Hawkeye, loads down his ammo with various special gadgetry effects, there is always the thought in my head that an exploding boomerang that COMES BACK TO YOU IF YOU MISS YOUR TARGET has to be the stupidest thing anyone has ever come up with.

Captain Boomerang is one of the few villains that could defeat himself in a fight, is what I’m getting at.

Nothing proves that more than this stained and dogeared copy of Batman number 322, pitting the dark knight detective against the guy with the accent and the L-shaped sticks.

We begin this tale in quite a different place, however, and with this young woman, who is quite a piece of tail herself. 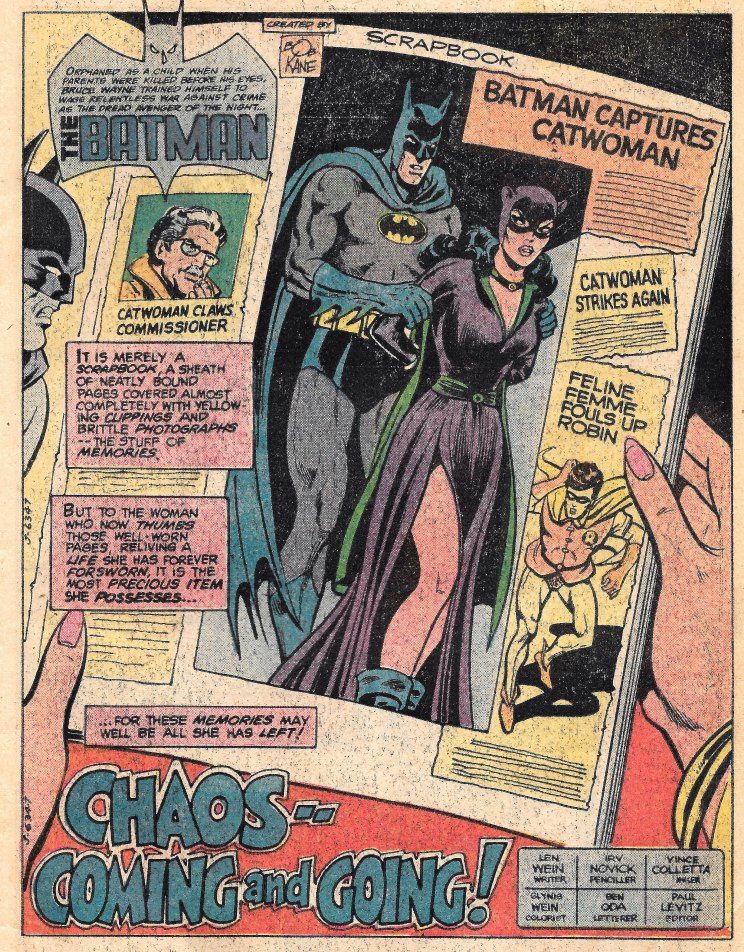 Yes, that’s Selina Kyle. She’s either pining for Batman or pining for her days as Catwoman or perhaps a little of both. Selina factors into our backstory, setup for next issue. 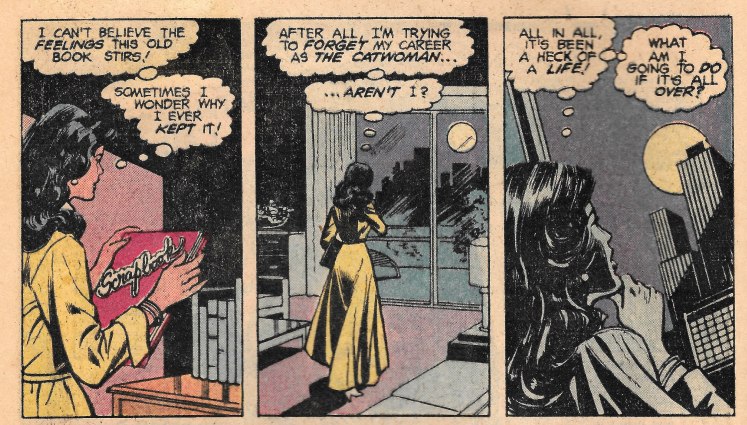 Our current issue gets its legs underneath it in the bottom two thirds of the following page, where we travel across the city of Gotham to an early morning paper delivery truck making its rounds.

When suddenly a boomerang cuts the string and messes up the stacks. Yeah, unlike the wording, the boomerang can’t somehow make the newspaper disappear or something.

If this is Captain Boomerang’s big villainous act, he’s going to have to try a lot harder to get me to care. 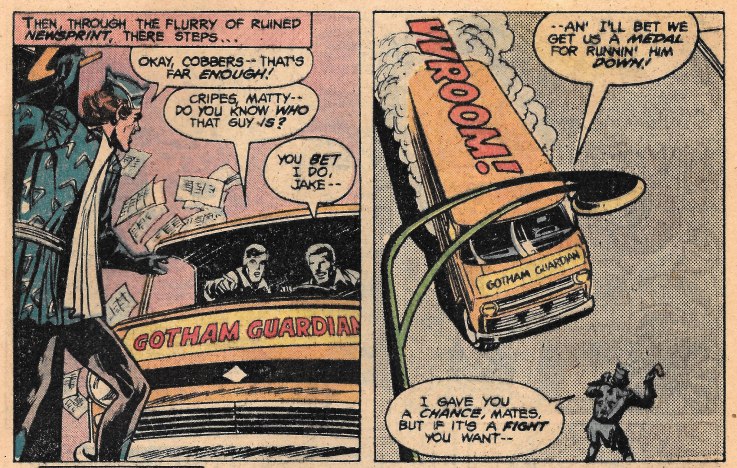 You know how you can tell you are failing at being a supervillain? When guys working in delivery trucks attempt to catch you, that’s how.

The book allows something stupidly ridiculous to happen just to give Digger a chance at looking menacing. 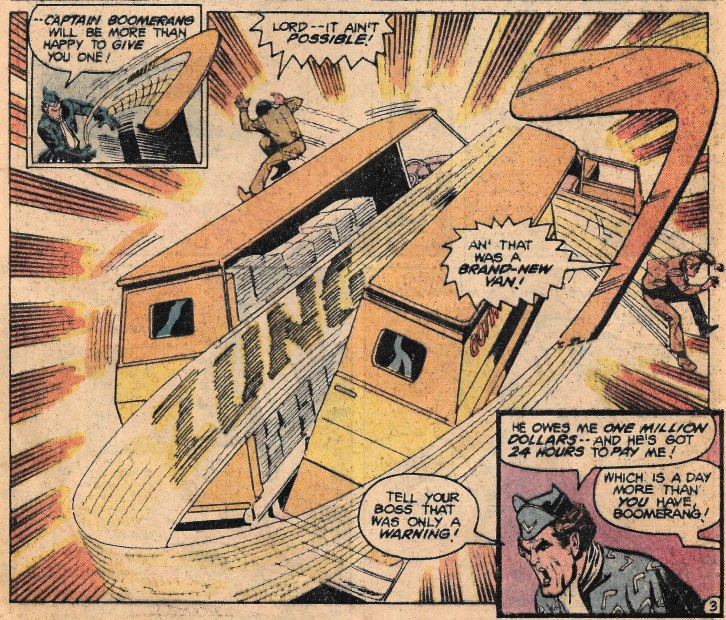 Try that in real life, I DARE you.

And it looks like the main story in this book is slated for five pages because there’s Batman which means Digger should just give up. 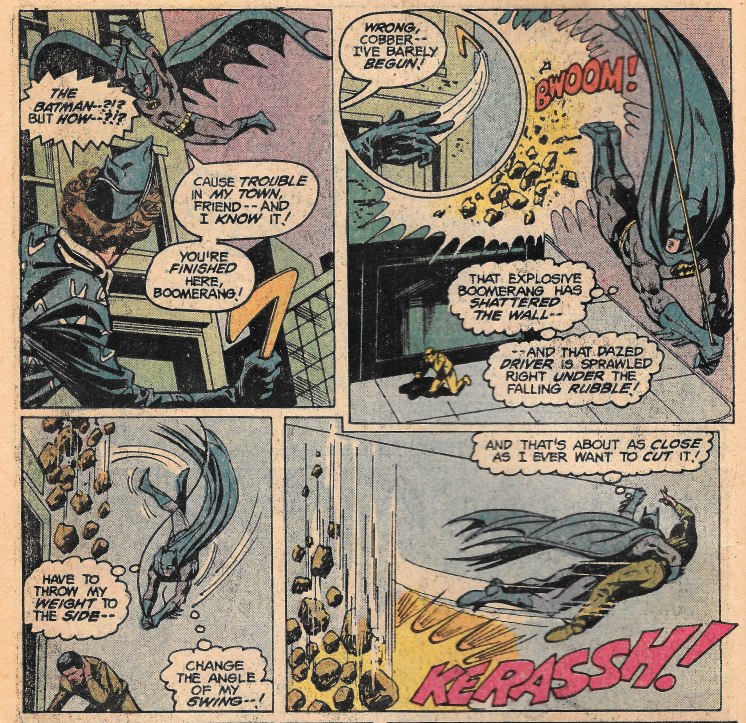 Except he puts someone else in danger so he can escape. Because he is a big pussy is why.

Okay! That’s it. I give up on this story. Batman is totally going to win. Let’s read something that might have a bit more excitement in it. 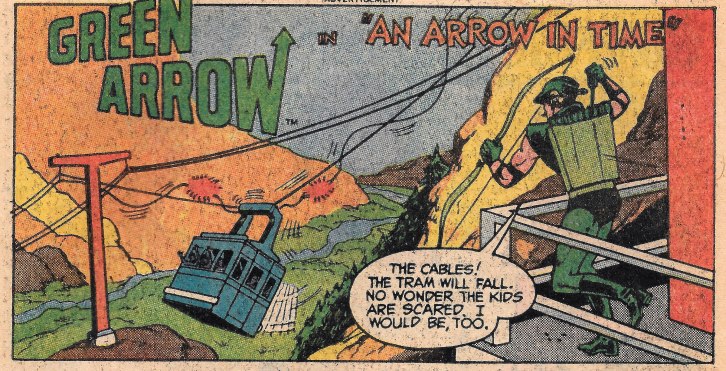 Woah! Green Arrow is patrolling Star City when one of the skyhook cars breaks free. What is Ollie going to do?

Crap, there is no way that can hold for long. I sure hope everyone gets out okay. Ollie better think of a way to keep them calm. 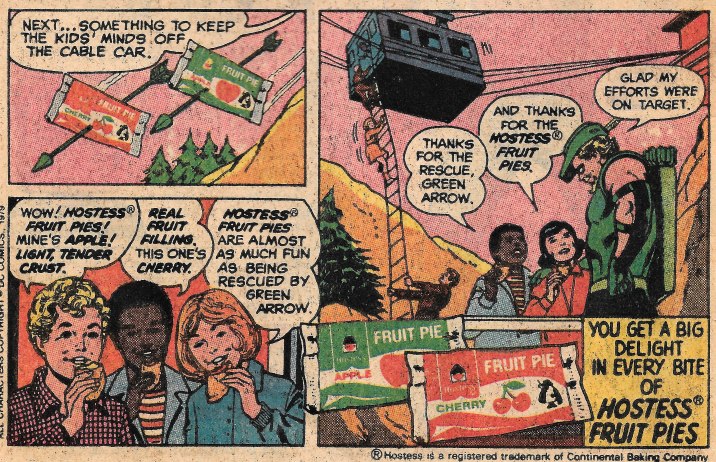 Mmmmm! Nothing beats Hostess Fruit Pies. My favorite is cherry. What’s yours?

What do you mean I have to go back and review the rest of the Batman-Boomerang issue? I don’t wanna! Please, don’t make me? Please!

Batman goes back to his home, which at this juncture in the o’le Bat-timeline was downtown at a place called the Wayne Foundation. Keep that nugget tucked away because it will factor into my upcoming review on issue 3 of the Untold Legend of the Batman. A book I would MUCH rather be reviewing than this one. 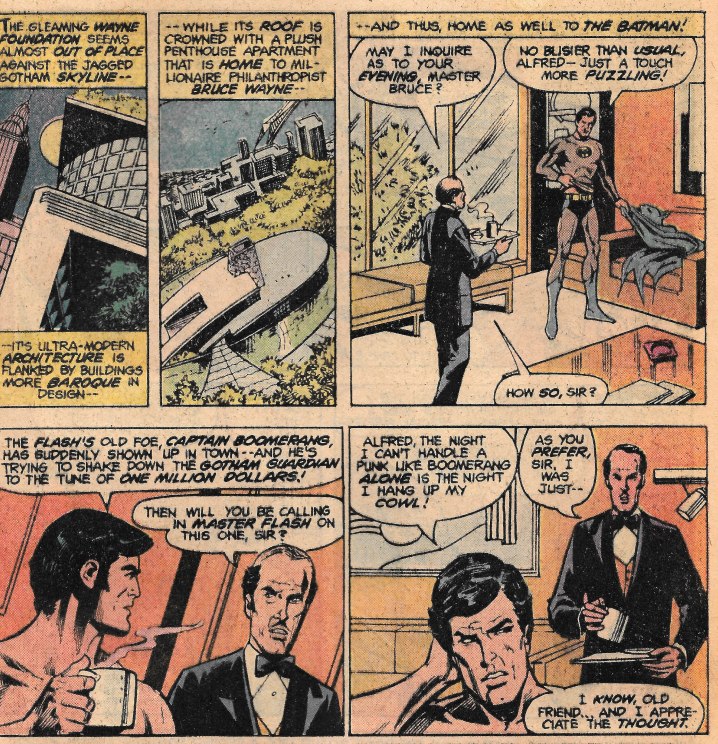 Bat-dis at Boomerang noted. As Bruce goes to shower, he asks Alfred to find out who owns the Gotham Guardian as they may be Captain Boomerang’s next target. 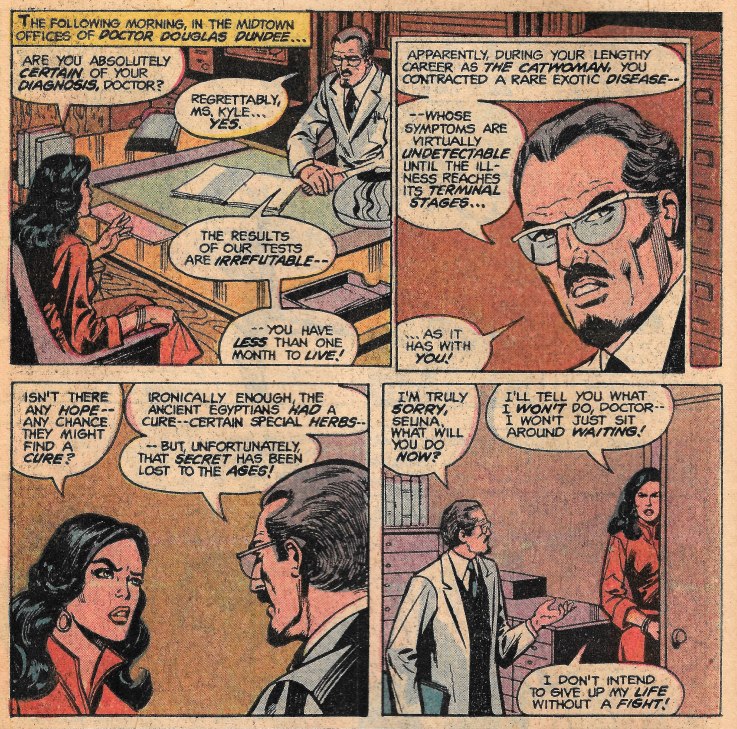 My lawyer informs me that I’ve just violated Selina’s rights under HIPPA so I need for all of you readers to kindly forget everything you saw in that last page.

Digger explains why he is in Gotham. He is owed some kind of odd Harry Potter money or something. 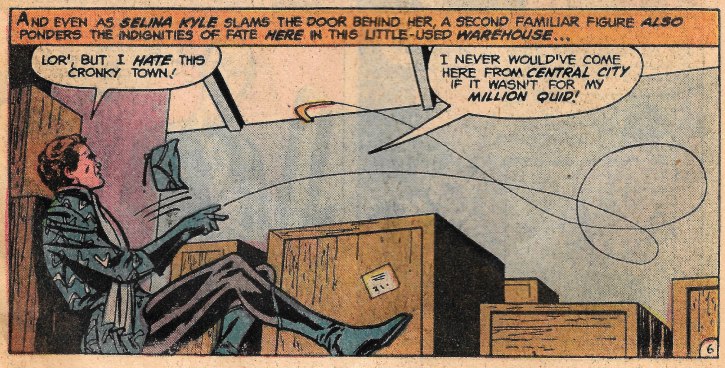 Seems, he invested in the Gotham Guardian and the stock tanked or something. So he’s here to collect directly from the owner using THIS: 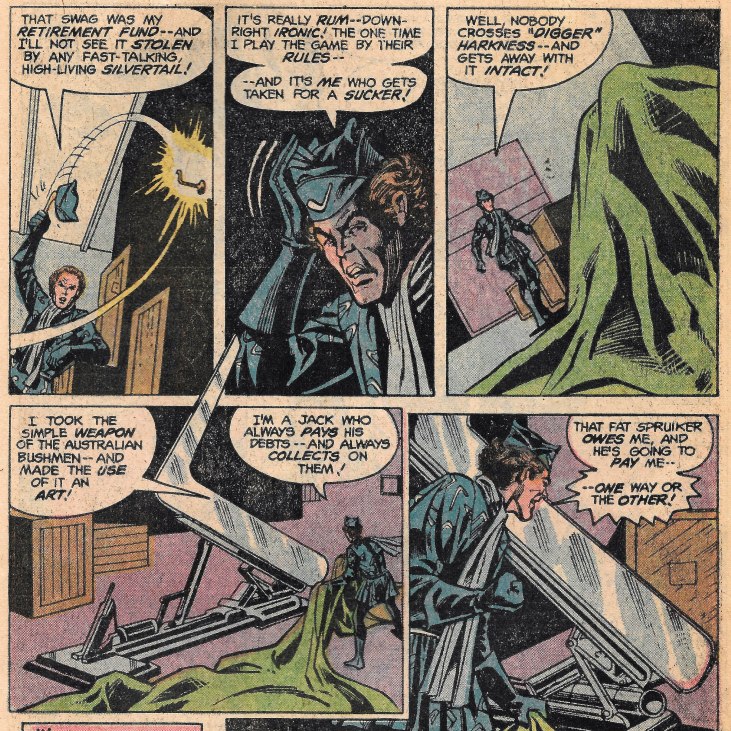 Yes, that’s the same giant rocket “space-boomerang” he used on the Flash starting way back in Flash 117 and again in Flash 124 and possibly every appearance since because what else has this one trick pony really got? Oh, and it has never ever worked in ridding him of the Flash. 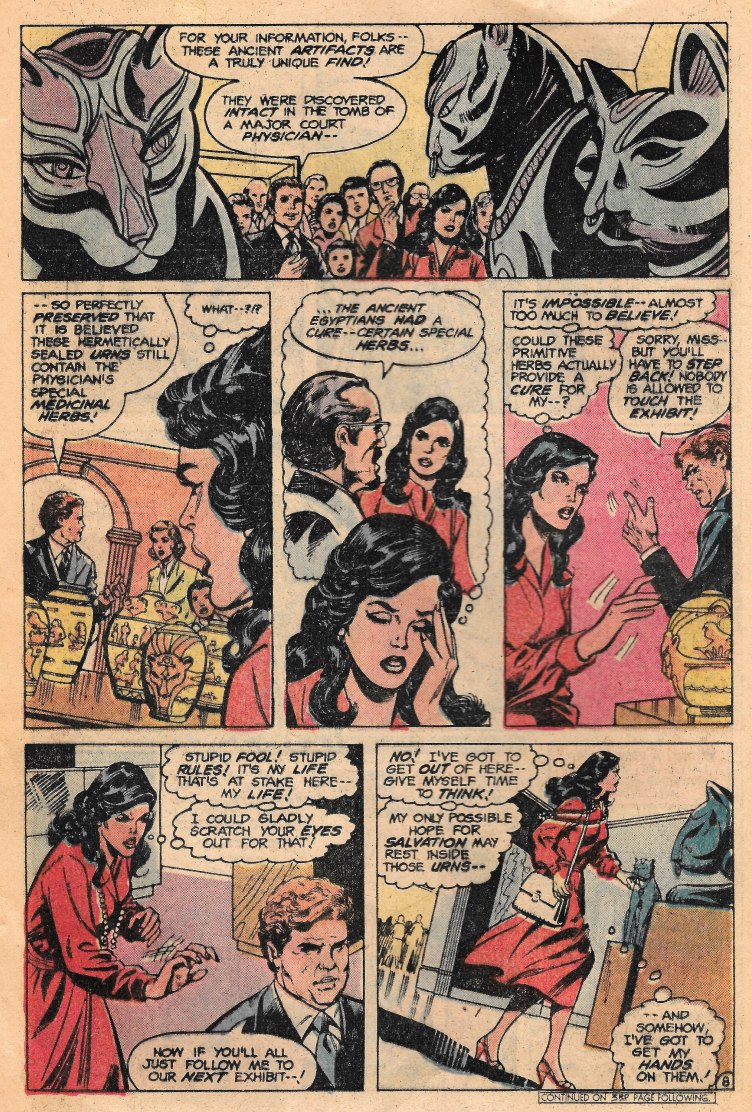 Selina visits the museum while Captain Boomerang polishes his “weapon” (no, I mean the space-boomerang not..”his weapon”), and discovers that the ancient Egyptian clay pots may store the very herbs she would need to cure herself of…whatever the heck she has that you were asked by my lawyers to forget you know about.

But, because she isn’t a criminal anymore she can’t seem to lay a paw on them. That will soon change.

The book takes a bit of a racist turn as we meet one of Batman’s many “colorful street people” who acted as informants for him. This one is code-named Shamrock because he’s a homeless, drunken Irish bum. Or if you want to use less words: Irish. 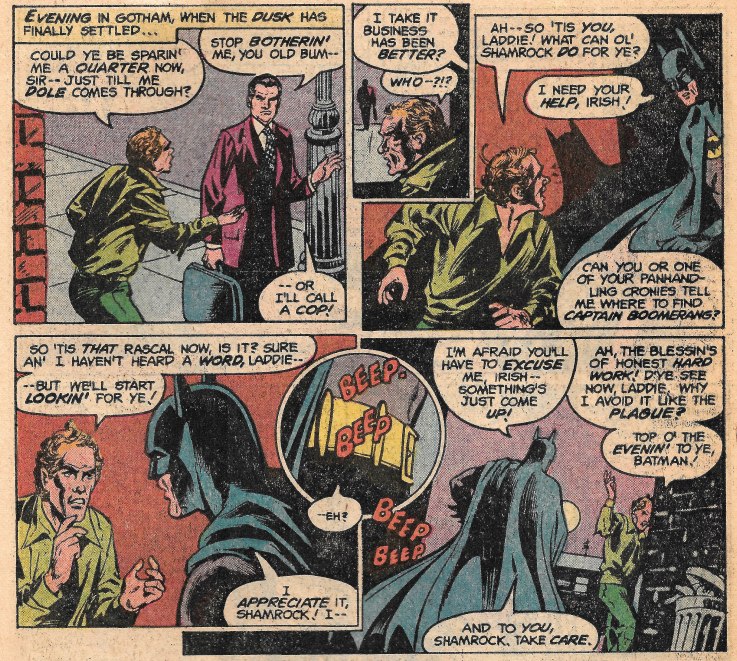 He’s interrupted by news that the owner of the Guardian is none other than Bruce Wayne’s current business rival, a man he’s never met named… 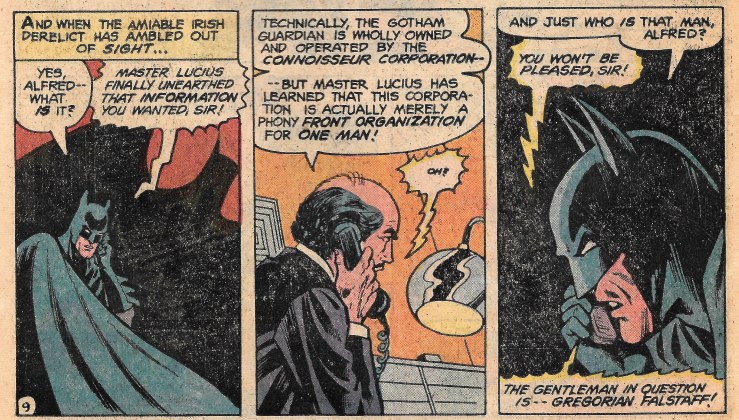 At that very moment, Gregorian and his manservant/bodyguard Karlyle (no relation) Krugerrand (yes, like the gold coin) are in his penthouse when who should show? 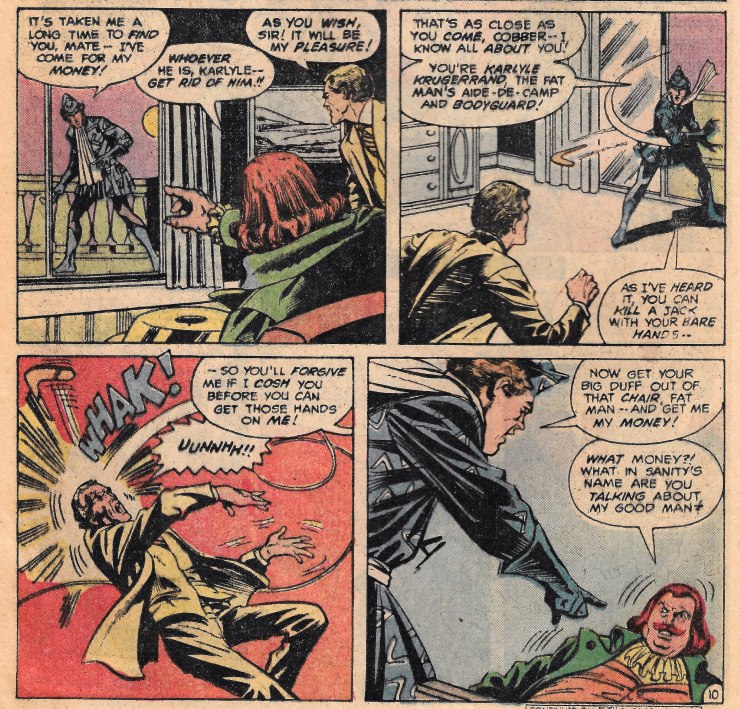 Anyway, Digger explains how the stock price of Gregorian messed up his finances. Gregorian tries to explain how the stock market works to Digger. Stops. Has to start all over again. Stops AGAIN. Starts up a third time. Realizes from the glazed look in the Aussie’s eye that he still doesn’t understand that the money from the stock purchase didn’t go to Gregorian.

Luckily Batman shows up then. 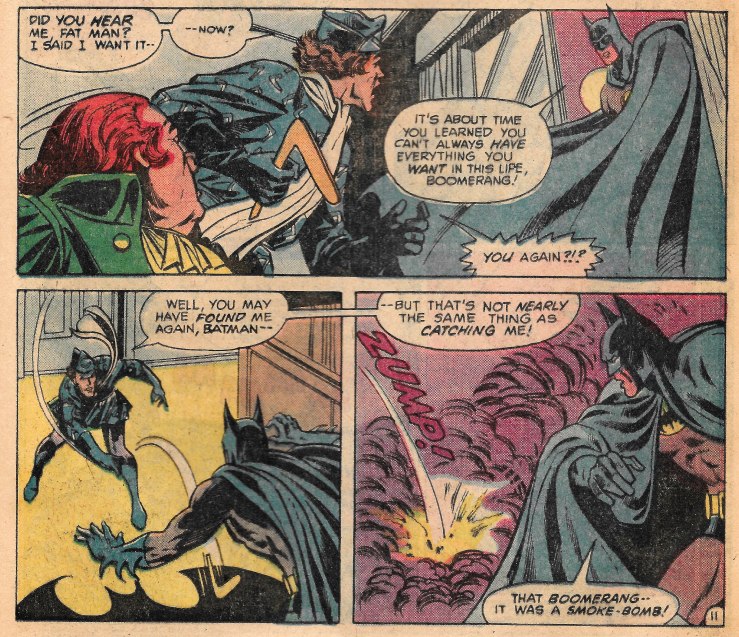 And in fighting Digger one of those once in million-billion chances happen. 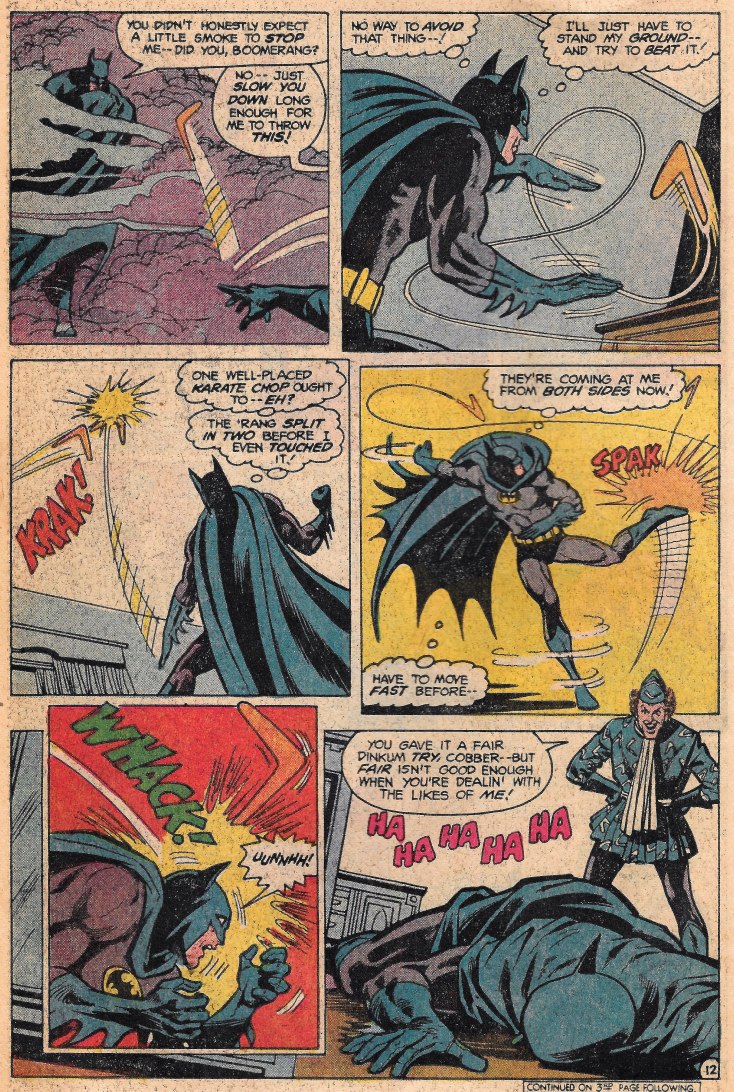 Oh, don’t laugh. Your skinny butt had so little to do with that…anyway, now would be the time to kill Batman. Except this is Captain Boomerang, the guy that doesn’t understand how things like the stock market work. So instead of killing him… 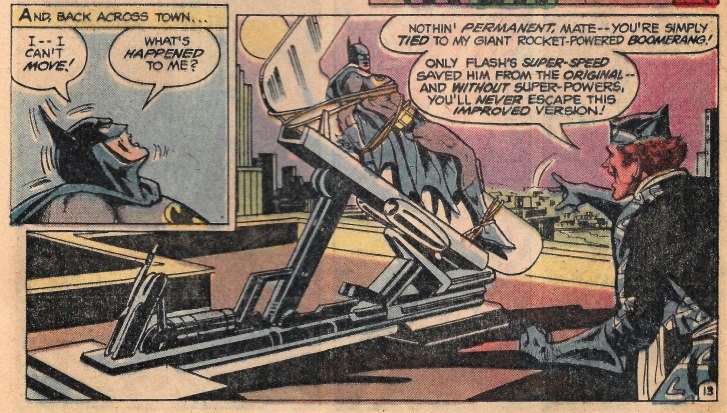 …he straps him to an overly elaborate and easily escapable deathtrap… 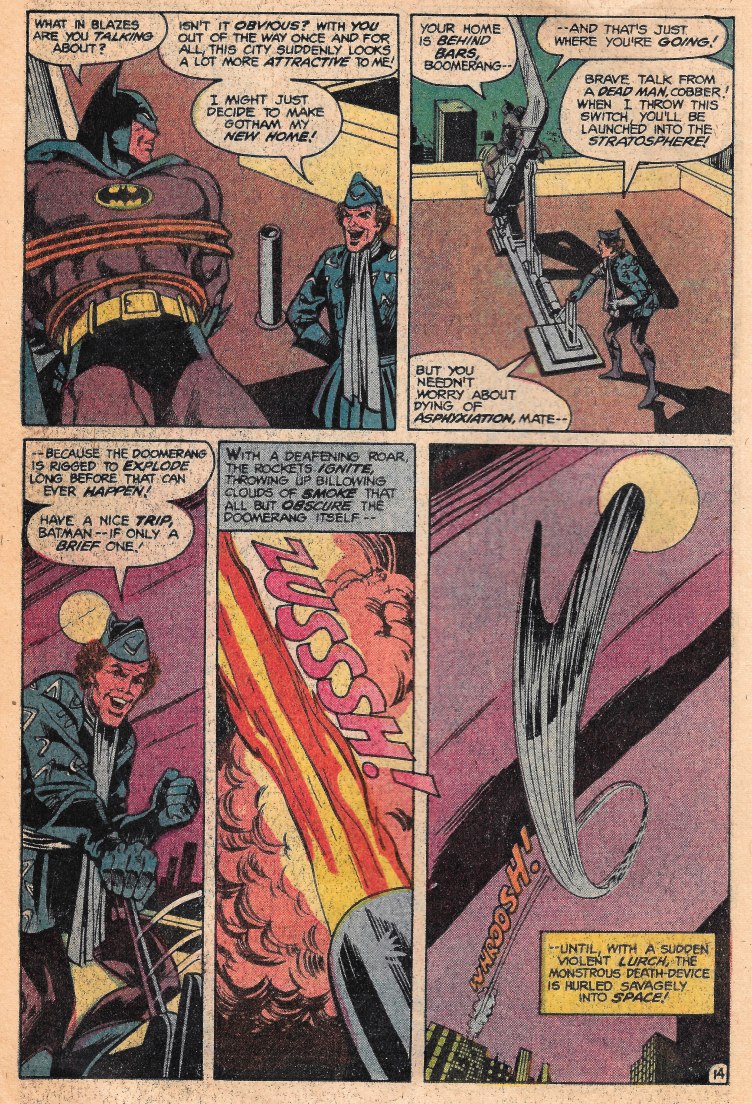 …which he sets off… 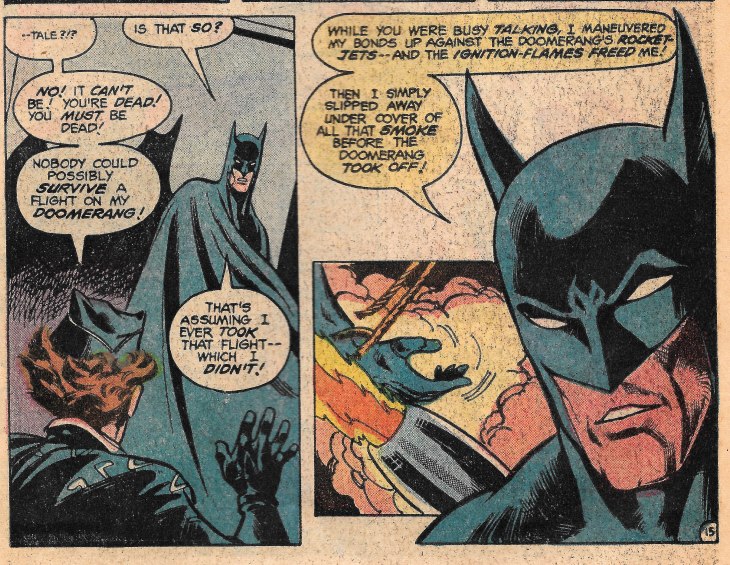 …only to then notice that it didn’t contain Batman when leaving the ground.

He was standing RIGHT there! He watched the damn thing take off and failed to notice Batman wasn’t on it. How?...you know, I don’t want to know. Please just let this be over? 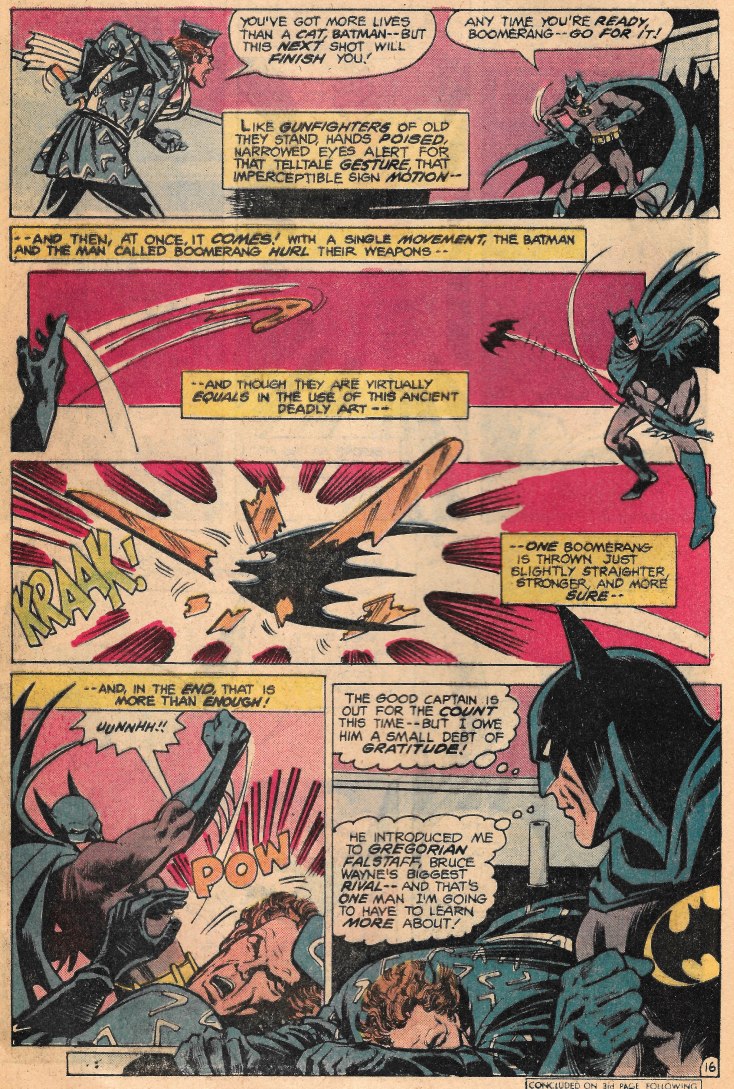 All too quickly, it is over. Mainly because I’d like to see Bats beat Digger to within an inch of his life for being so lame. 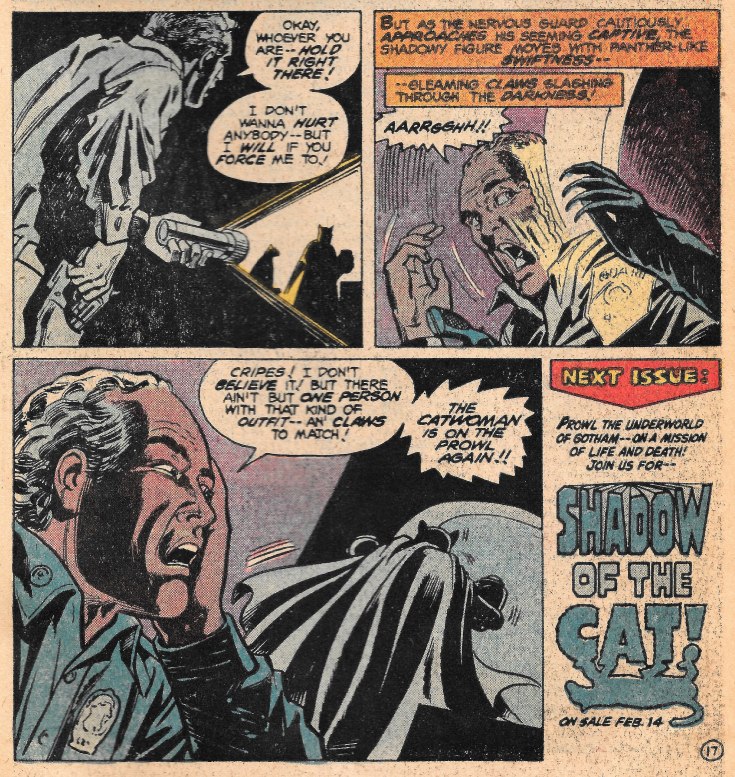 Sadly we check back in on Selina and her desperation and inability to get help from Bruce has caused her to turn back to a life of crime. I can’t really say I blame her. And at least next issue sounds interesting. Let’s hope that when Batman throws Captain Boomerang in the slammer, he doesn’t come back.

Posted by SonOfCthulhu at 4:05 AM