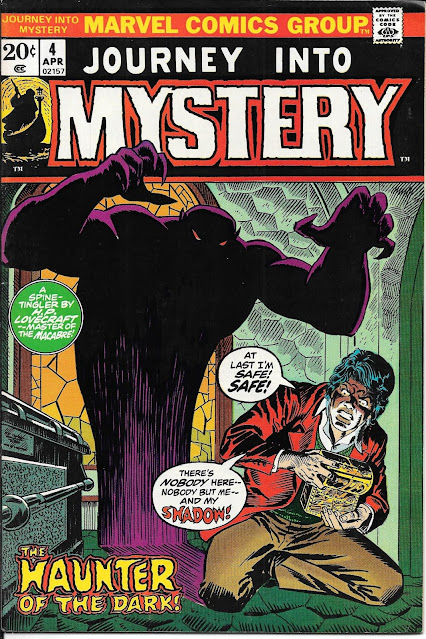 A brief trio of tales kicked off by an HPL story

Scattered throughout time there are comics that adapted Lovecraft stories, like wrapped treats waiting to be found. Part of my Halloween Crapbox “trick or treat” has been unwrapping these little candies to find out if they are good or ill. Maybe the adaption will feature off-putting art or attempt to say things story-wise that Lovecraft didn’t. I’m happy to report that this Marvel story gets it right and features decent backups as well.

It’s Halloween and I don’t want to belabor this, so let’s take a look, shall we?

“The Haunter of the Dark”

The tale up to bat first is Lovecraft’s The Haunter of the Dark, the last written of HPL’s known works. The story is a sequel to a story called The Shambler from the Stars, a tale written by a teenage Robert Bloch. Bloch was the person who gave us the prose version of That Hell-bound Train story we spent two enjoyable issues on earlier this month. Bloch was the youngest of the Lovecraft Circle, the group of writers who knew and corresponded with the celebrated author.

I’ve said something before about Bloch killing Lovecraft, so I think it is proper to explain that here. In Shambler from the Stars, Bloch erected a framework of himself as occult author Robert Blake and had himself visit a thinly-veiled imitation of Lovecraft in the form of a New England mystic who lives in Providence, Rhode Island…a mystic who doesn’t survive his encounter with other-worldly demonic forces. Thus killing off a likeness of himself proved quite impressive to the horror master. So much so that HPL does the same thing here: he used the character of “Robert Blake” who lives at the very same street address as Robert Bloch did at the time and then HLP…well, that would be giving things away, wouldn’t it. Lets like the comic tell the story, shall we?

We begin with a creepy church with people huddled outside worried that something might escape it. Across town a occult writer named Robert Blake seems to be watching too. 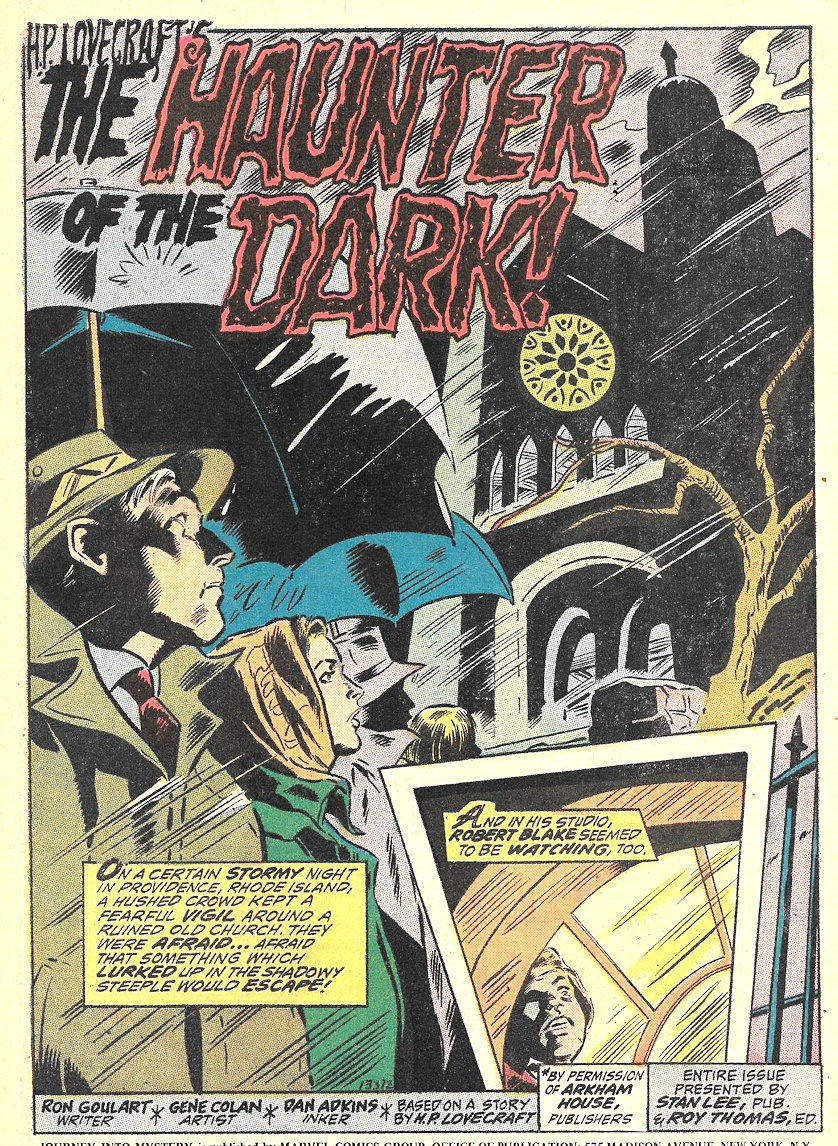 We flash back to Blake moving into town and noticing the ancient dark church with it’s villainous aspect. He becomes a bit obsessive about it, detecting a good story subject. Animals shun it and locals…well, they don’t talk about it much. 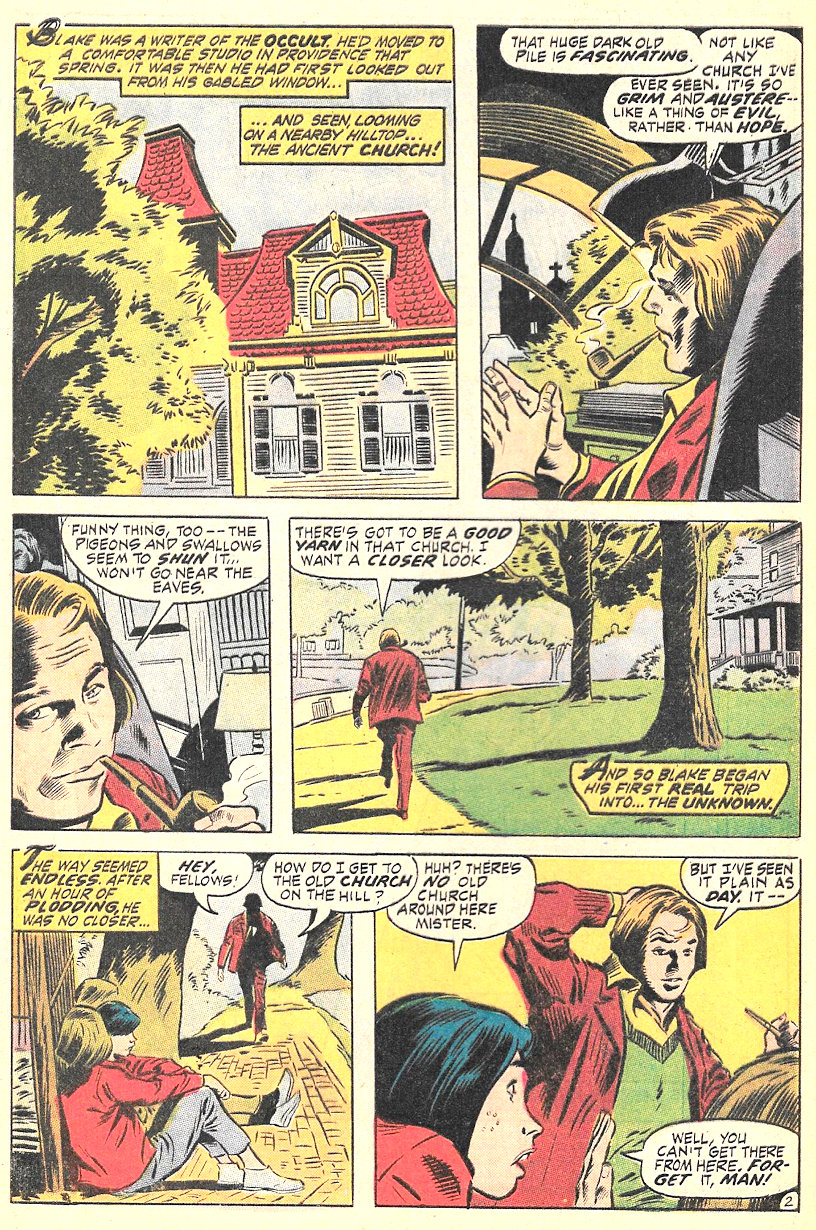 Or, like this officer, warn you away from it. Blake is undeterred, of course. 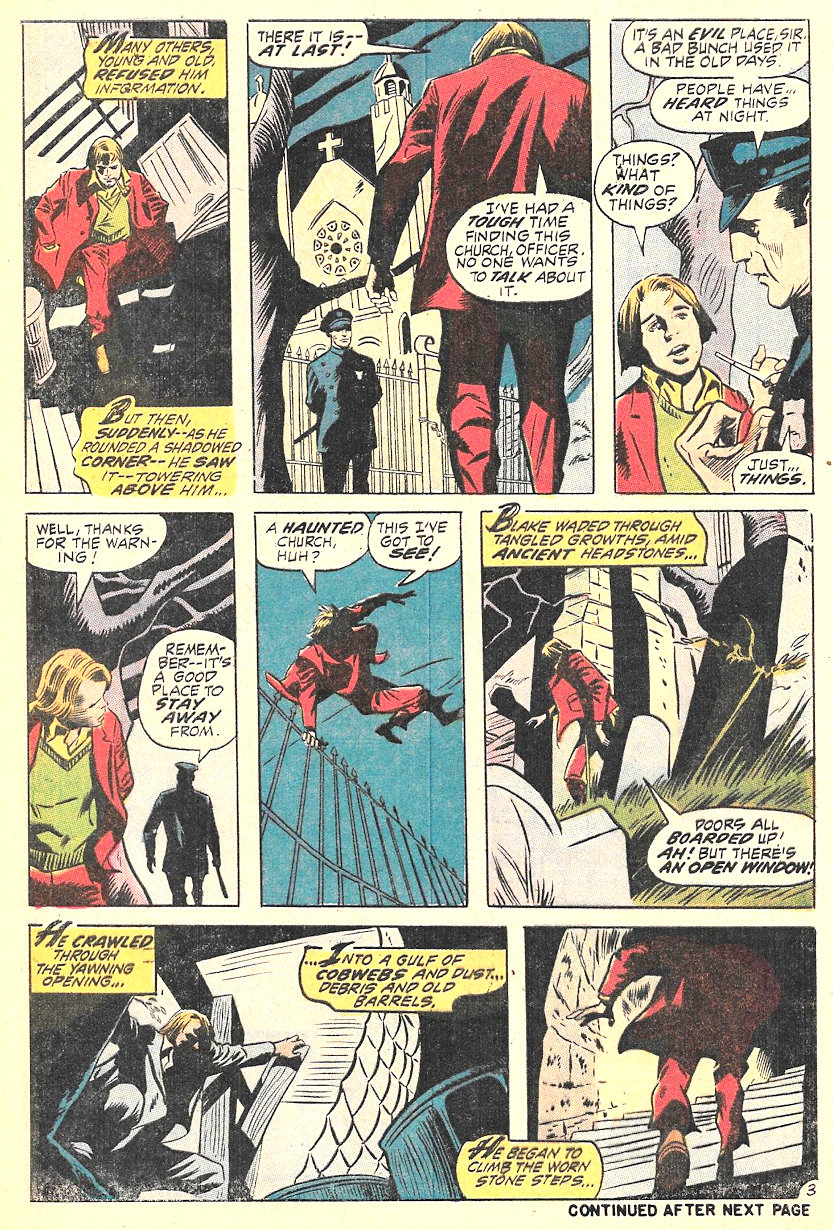 And his investigation of the hoary cult haven uncovers copies of the Neconomicon strewn about like church hymnals, coded manuscripts, and a dead body whose bones look burned. 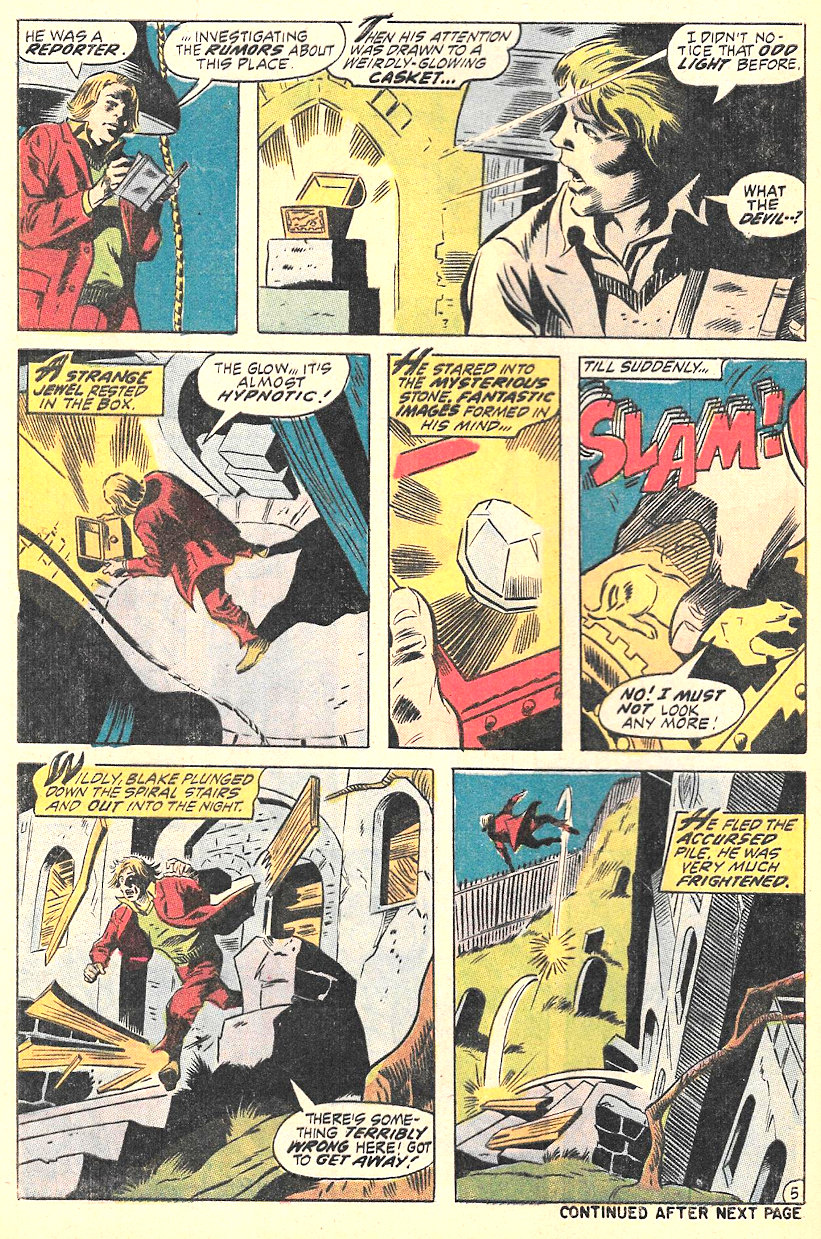 But worst of all is this odd casket containing a mysterious gemstone, something that catches the light in such a odd way that Blake can’t stand to look at it. He closes the lid on it and rushes from the place, scared out of wits. 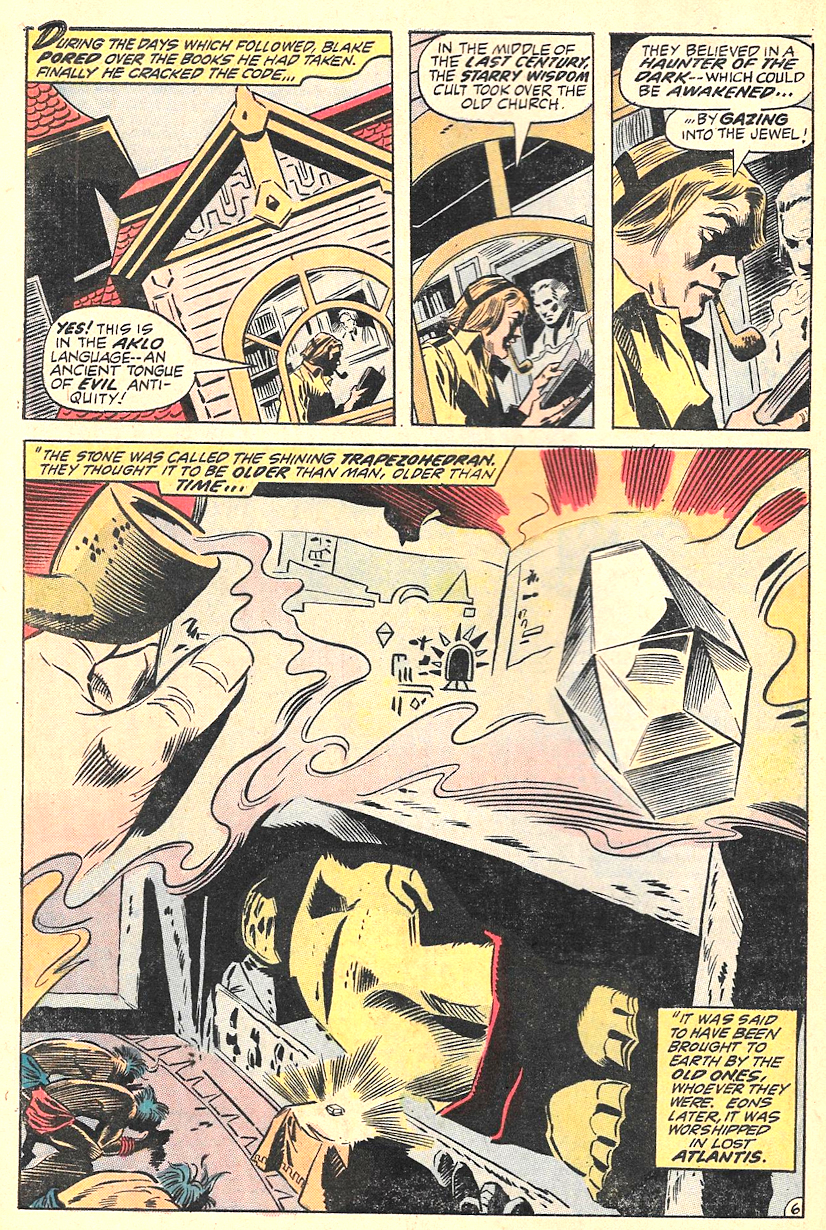 The coded manuscript is written in the Aklo language, an “ancient tongue of evil antiquity.” *smile* It gives the name of the cult that took over the church as the Starry Wisdom cult and goes into describing a demon that could be awakened by staring into the jewel he found. A history of the jewel also follows… 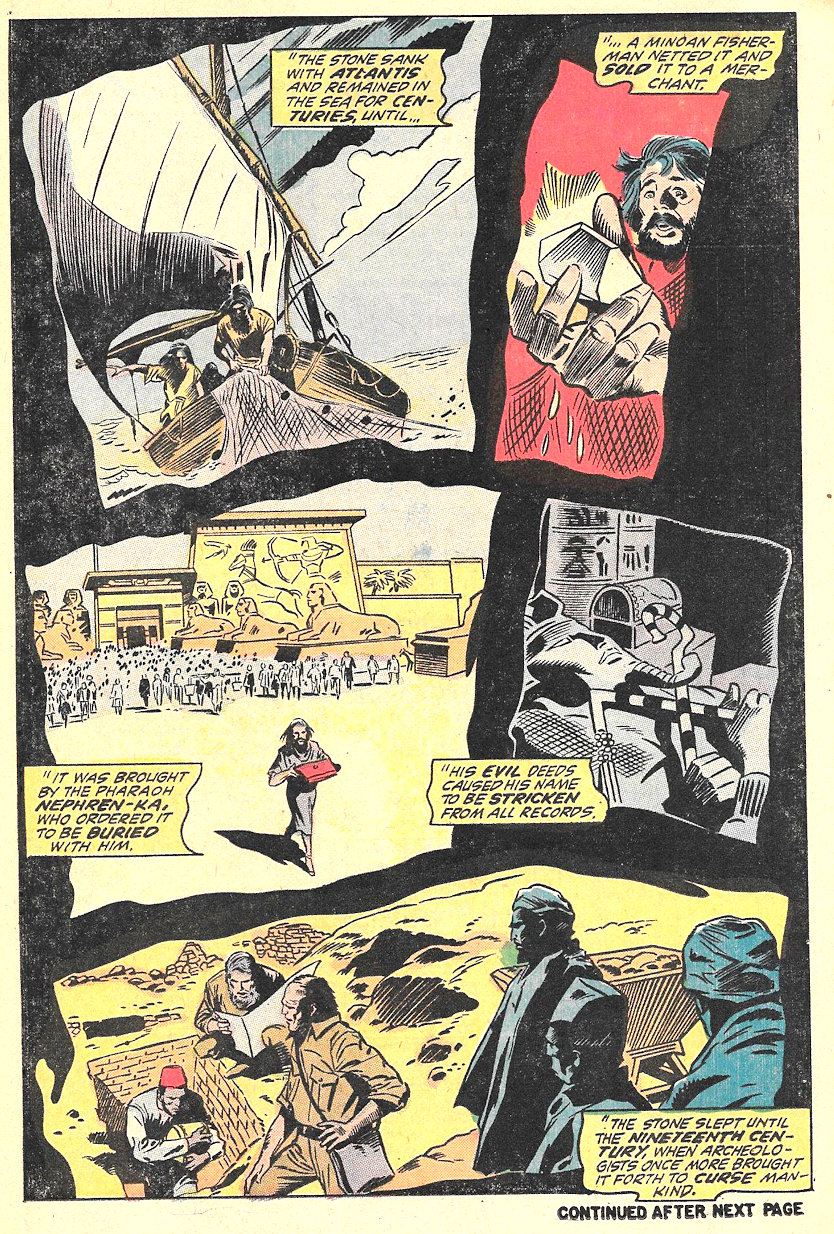 The notebook from the burned body comes from a reporter who closed the jewel box the same way Blake did. And closing it was a grave mistake. Grave. 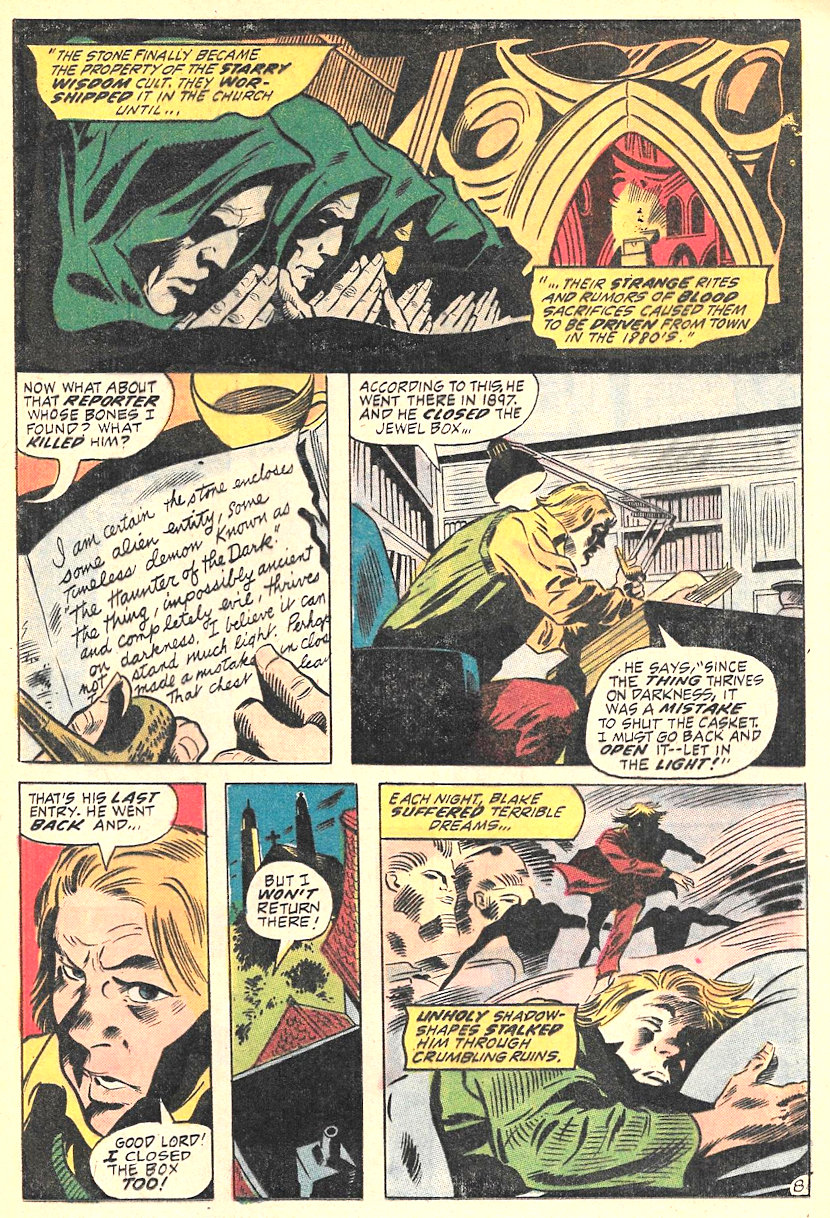 Blake swears to never return to the now haunted tower, but his dreams start to bother him, getting worse each night. And the locals start reporting stirrings in the tower of the old church, all of which unsettles Blake all the more. He awakes that night as if under some kind of spell, forced to the tower by some unholy summons. He barely resists going all the way to the tower before breaking its control. 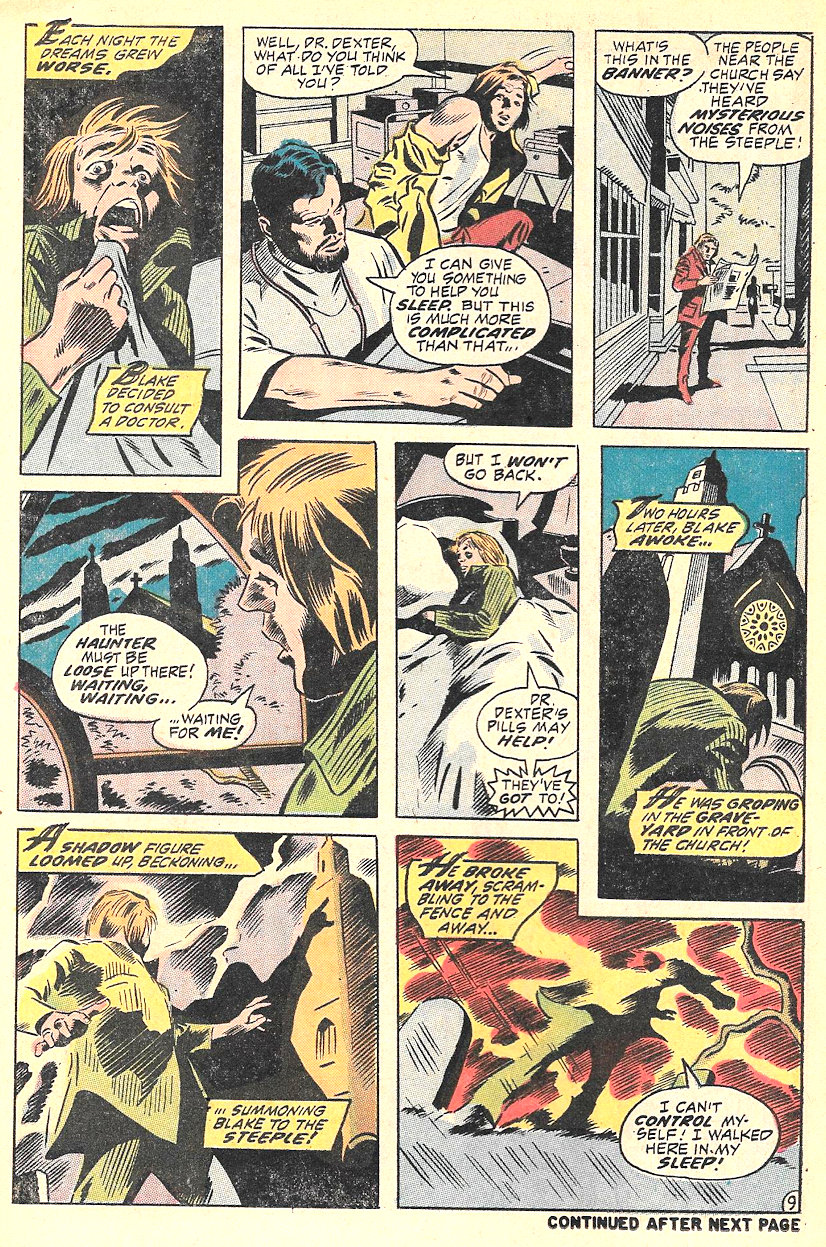 But according to the notes Blake has, light will keep the presence at bay. He turns on all the blubs in his house, hoping to ride out the night. Unfortunately a lightning bolt causes a power outage. The shadow of the haunter leaves the tower and seeks out the prey that unleashed it. Blake’s dead boy is found by a neighbor… 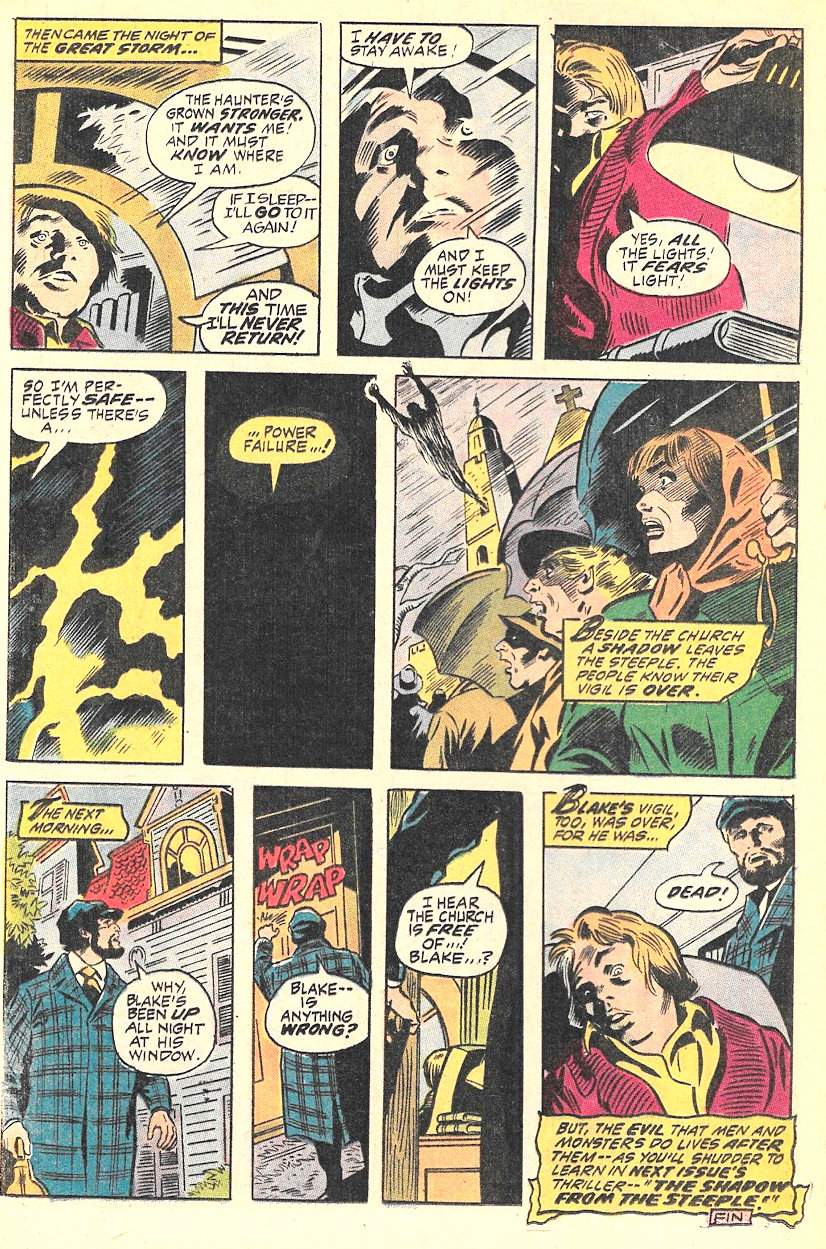 …and the third story is teased in the next issue box, a story by Bloch that was an answer to Lovecraft’s story. This was a great find and thrilled me to no end. I wish Marvel in the 70’s had mined all of Lovecraft’s work more thoroughly. It would have been great to see these artists interpret those pieces in this style.

Interesting aside, The Haunter of the Dark was dedicated to Bloch by Lovecraft. Bloch was the only individual to whom Lovecraft ever dedicated a story.

“The Price is Flight”

Next up is this amazing confection of a story by Adkins, Gerber, and Russell that is just too sublime for me to spoil. Read on and ENJOY this horror morsel. 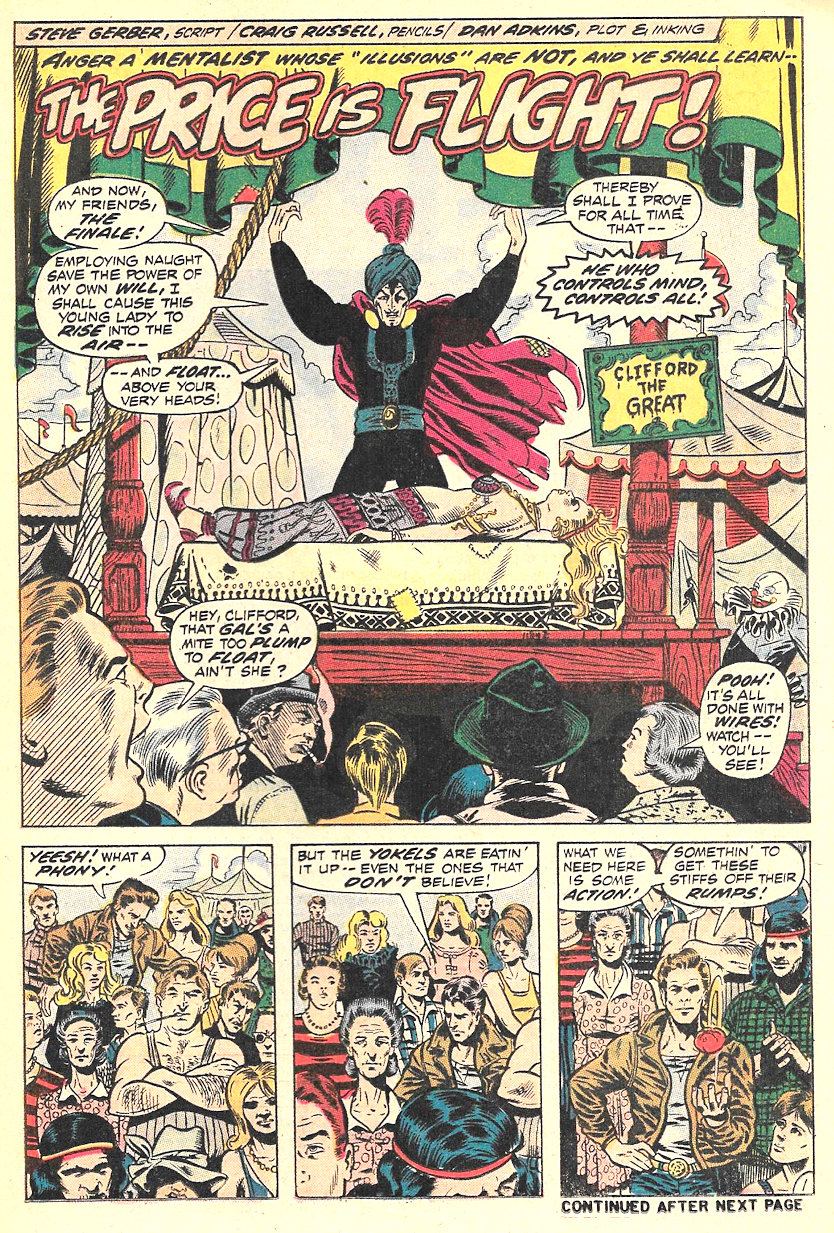 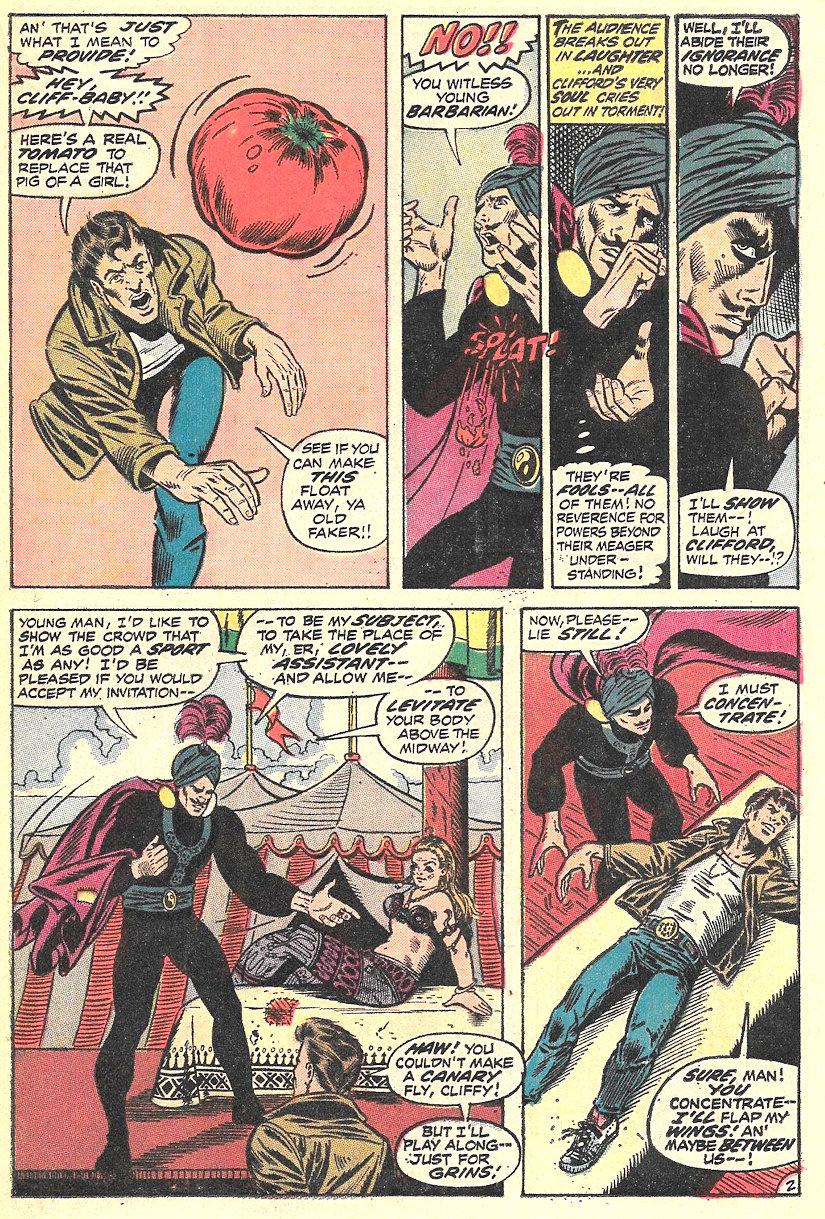 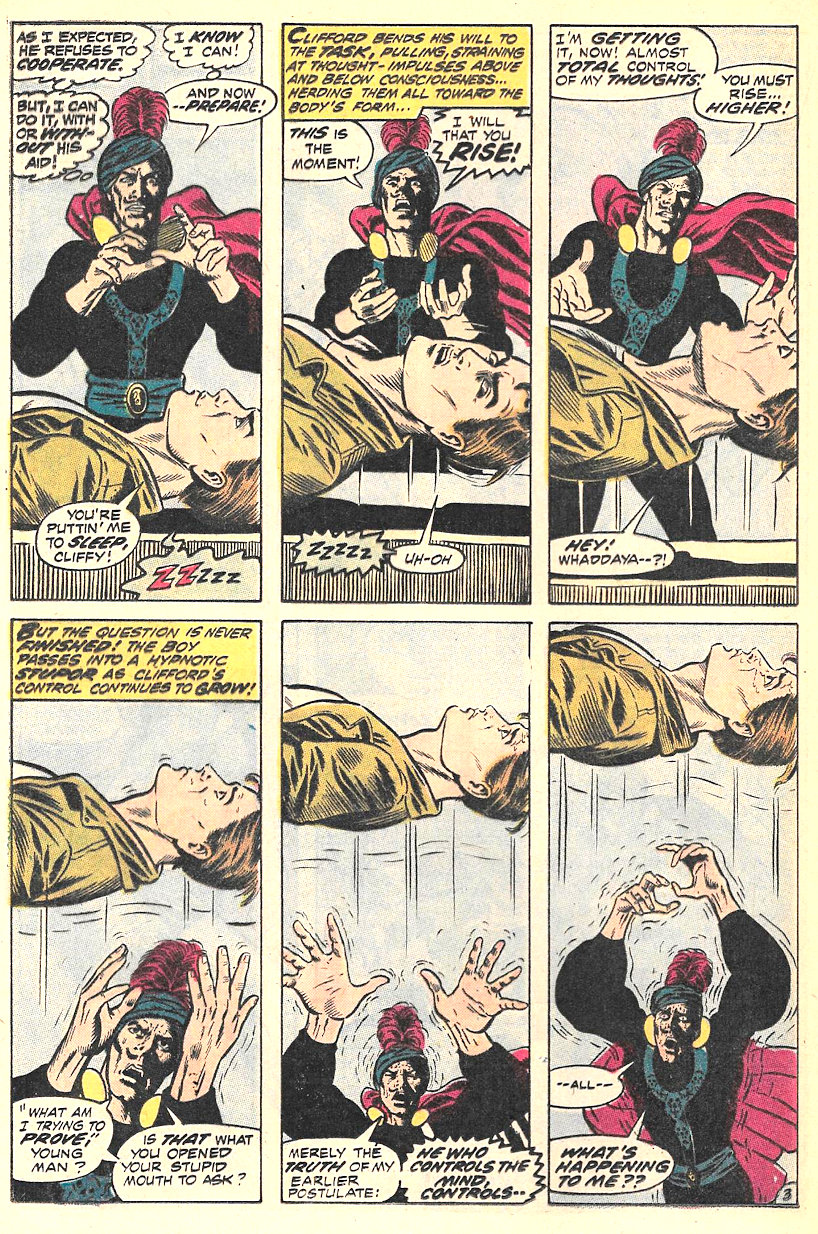 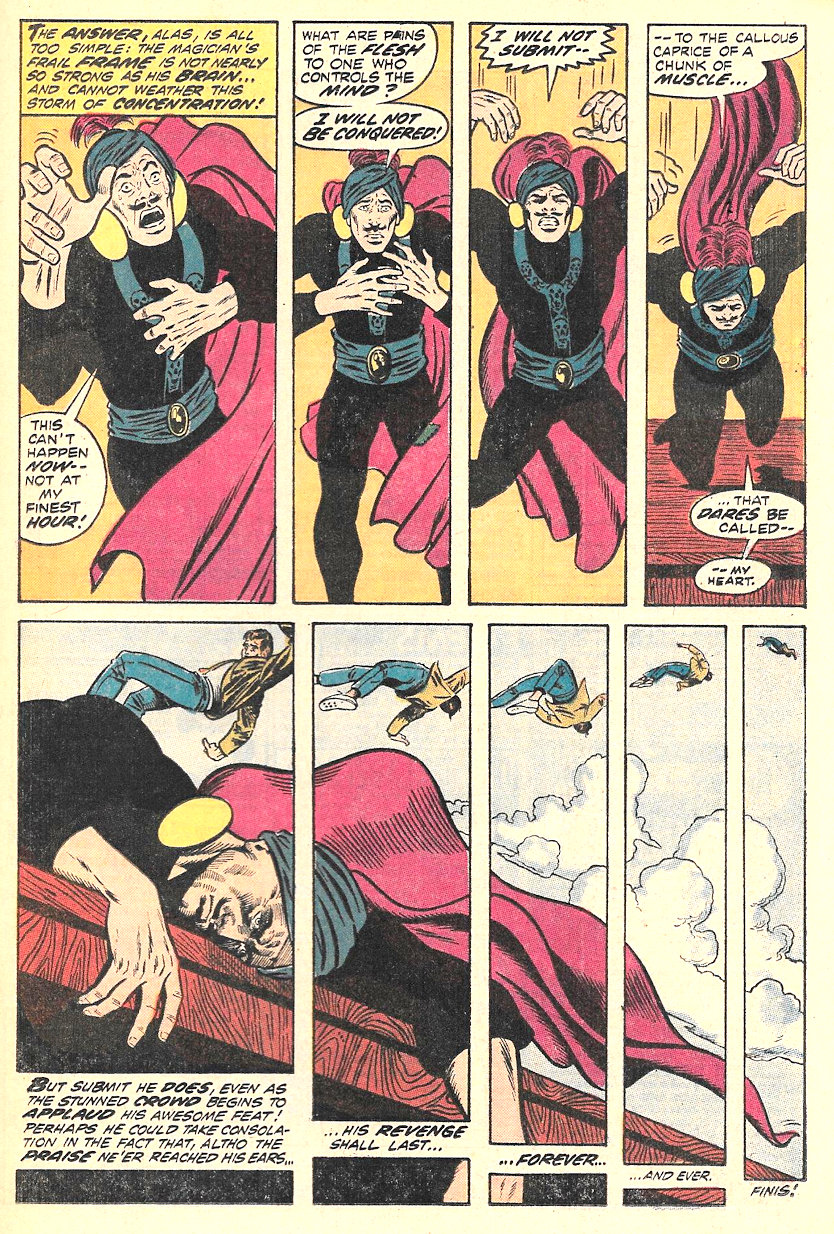 And that is how you do it, ladies and gentlemen. I can’t think of a more perfect story. It mixes outstanding art with an understandable premise and takes the story in a direction both unexpected and warranted. I LOVED this one. Hope you did too.

On to the third, and sadly, final act!

“the Man with Two Faces”

Body horror is always a win with me. I’m never secure enough in my own skin to not feel the neck prickles that start up when you add elements of the bizarre to someone’s anatomy. Let’s see how I fair with this tale, one that begins with a trip to the doctor. Note the story in the paper on our patient’s way in. It’s easy to overlook given the shocking reveal in the final panel, a much less friendly version of Kuato from Total Recall. 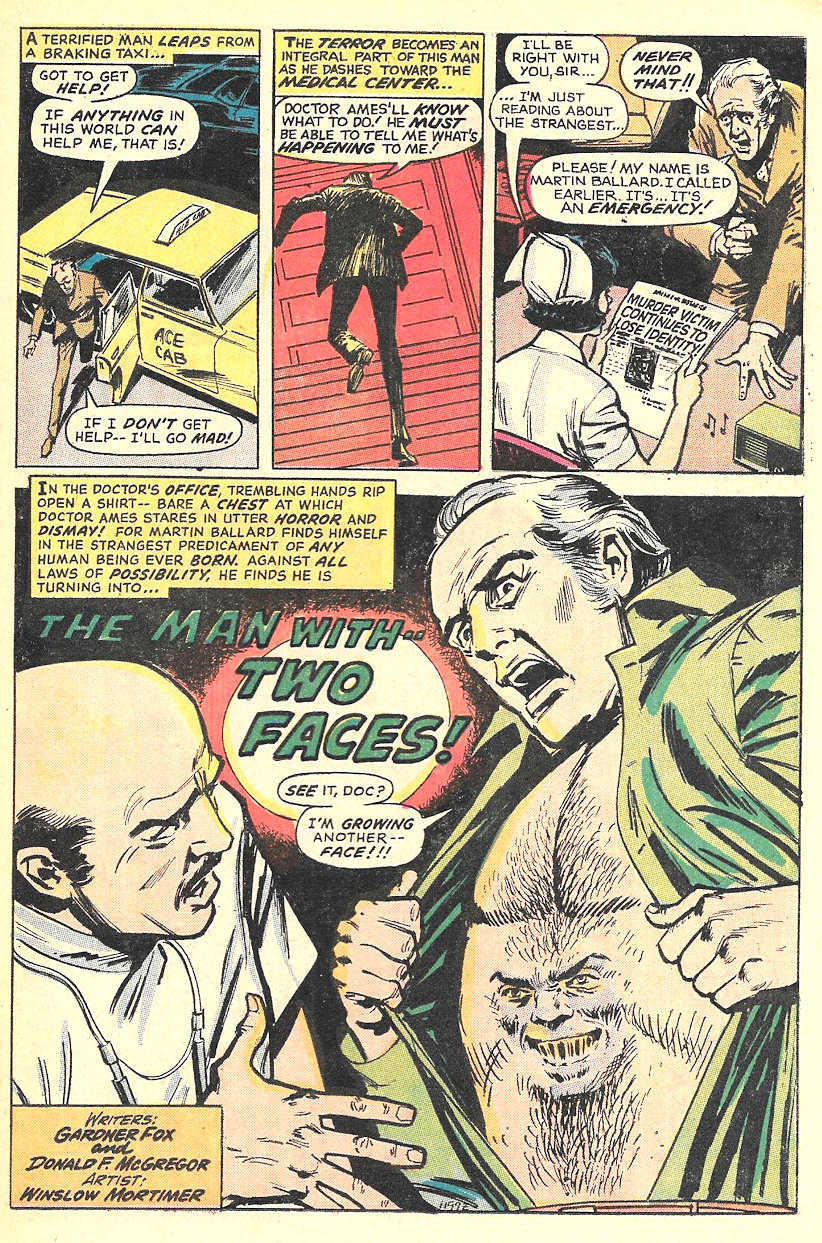 Here we go, spinning out how this might have occurred… 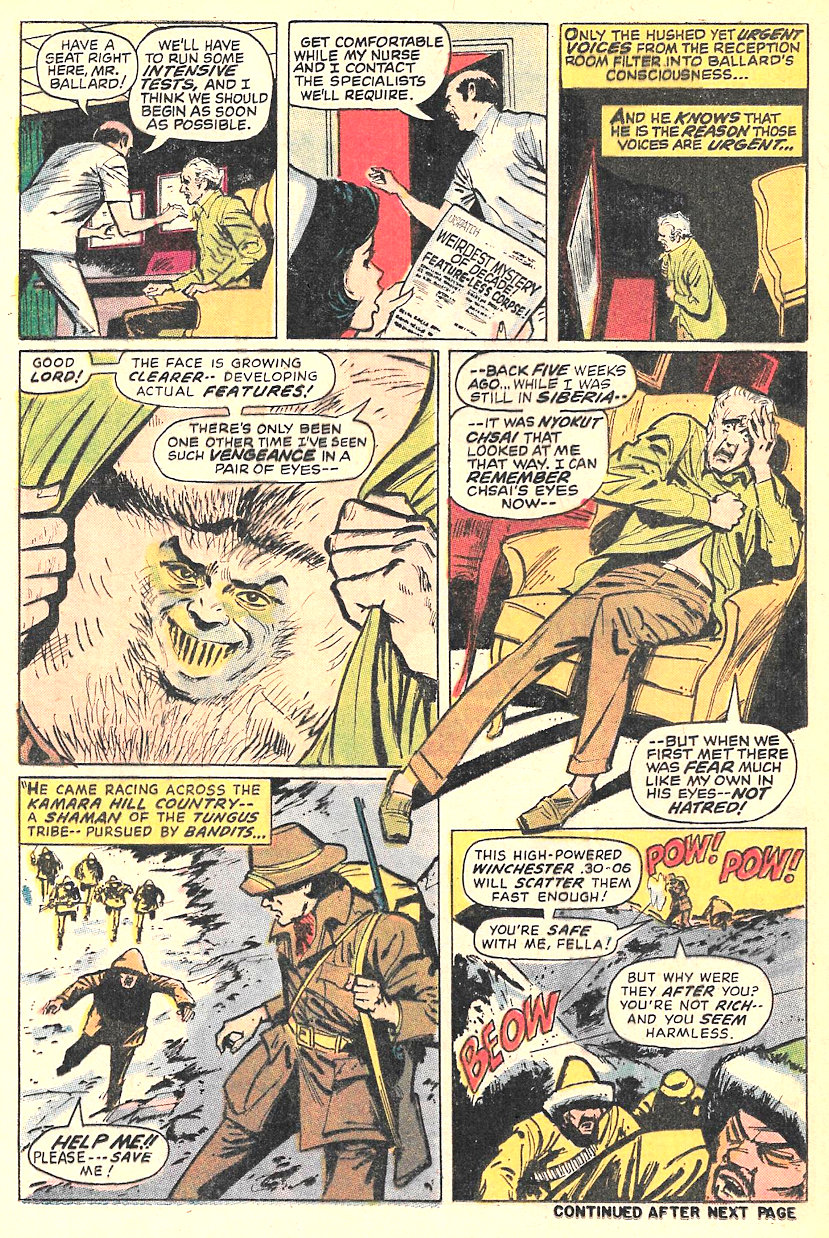 So, he helps out this shaman of this unknown Siberian tribe. That doesn’t sound particularly bad. And nicely the shaman shows the way to a billion dollars worth of ancient treasure. 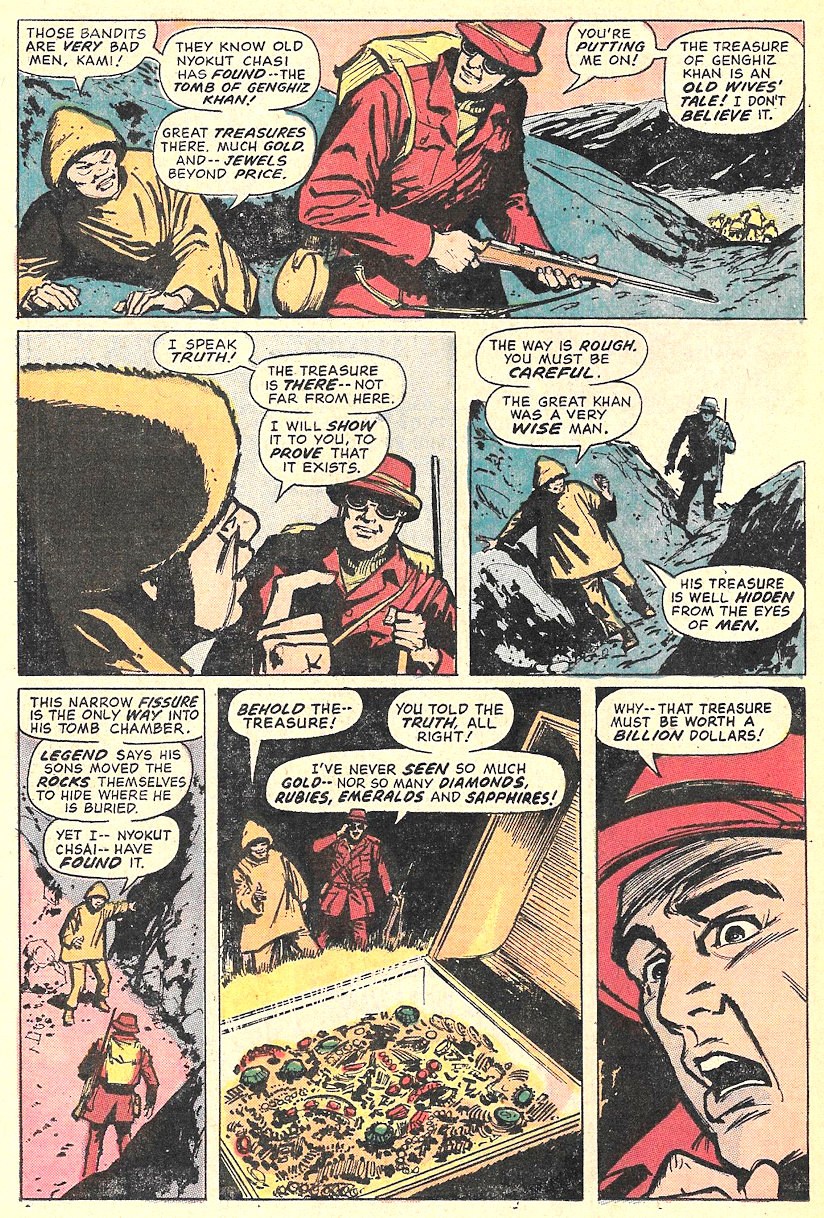 But of course the guy gets greedy when offered only one measly diamond as repayment, and he shoots poor Nyokut Chsai dead. Then he plunders the riches, but not before Chsai delivers one final curse upon him. 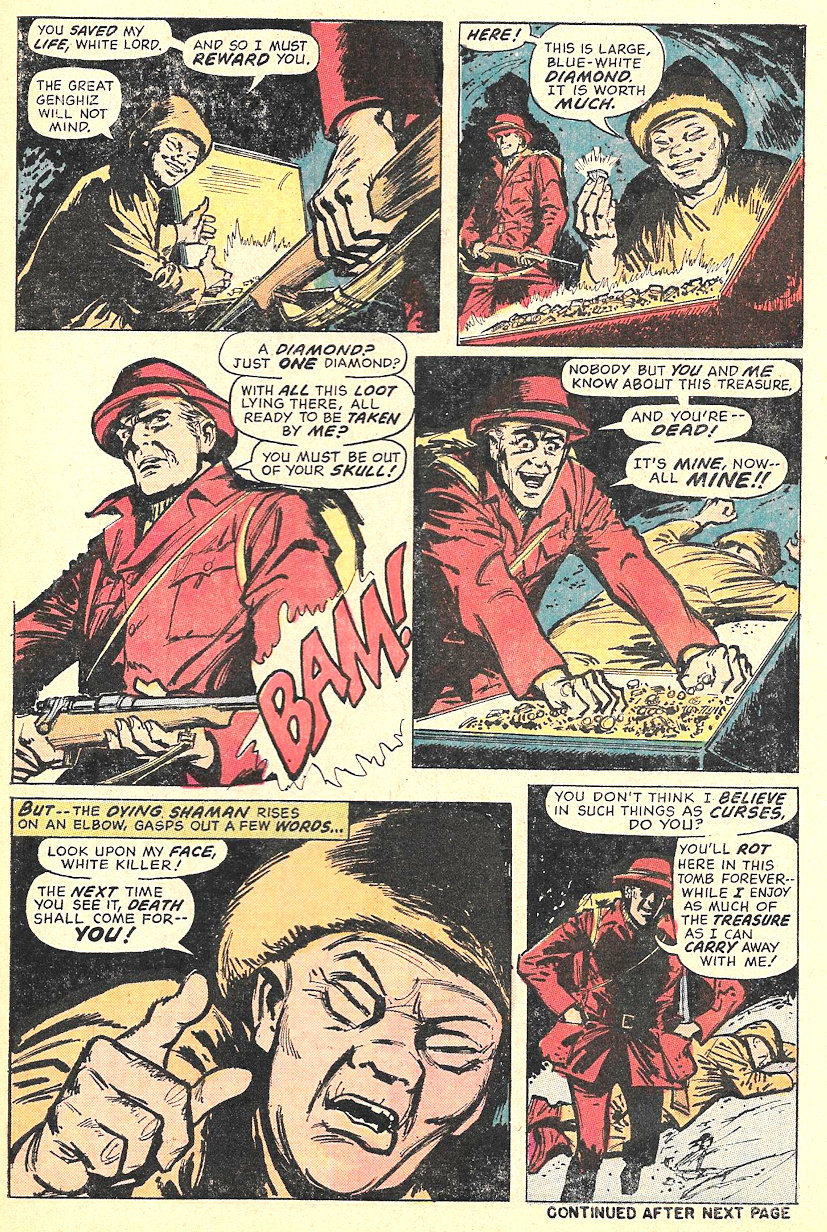 Our narrator spends as much of his ill-gotten gains as he can buying cars, expensive suits and women…and then a few short weeks later… 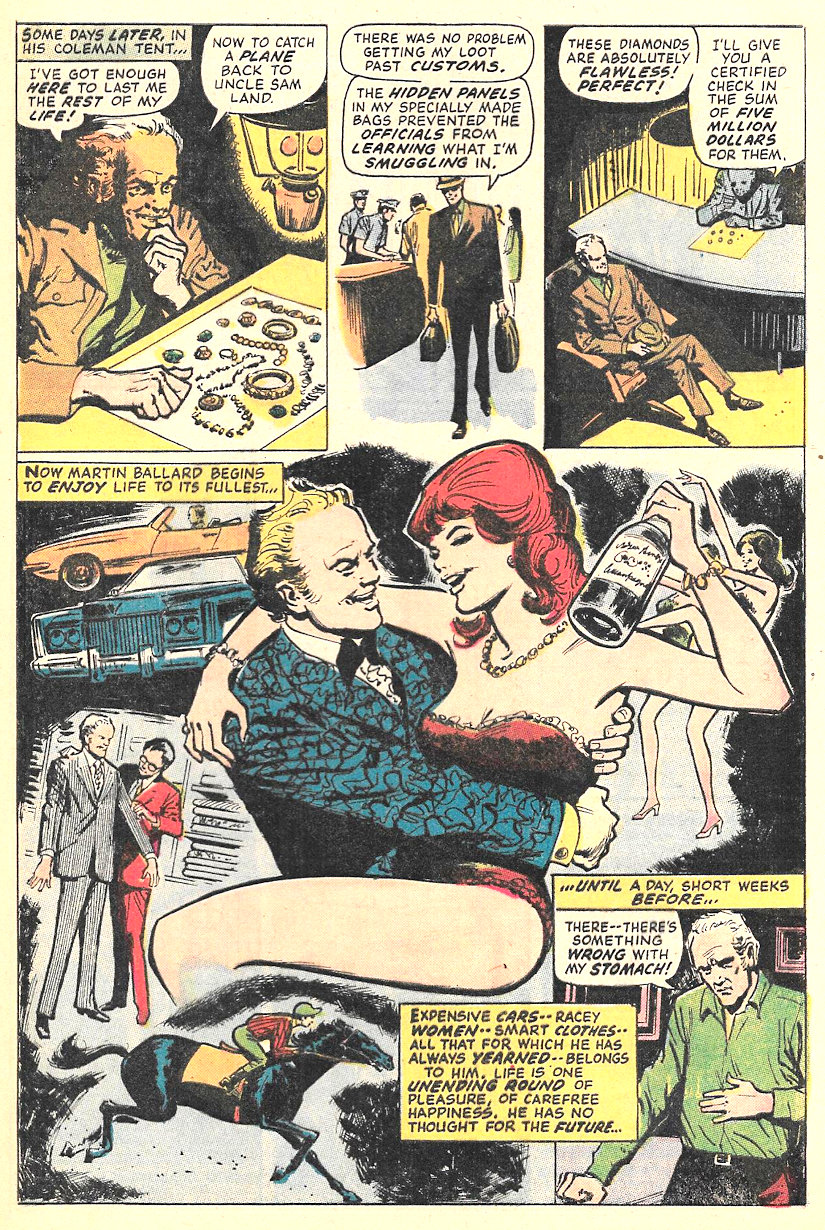 And thus we are all caught up…which is sad because the patient decides to end it all by leaping from a window. The face has disappeared now, leaving the doctor the only witness to these strange events. The newspaper story about the murder victim losing its identity isn’t properly tied in, and the story feels like a muddle. I get it and I get where it was trying to go, but it just never pulled it all together. 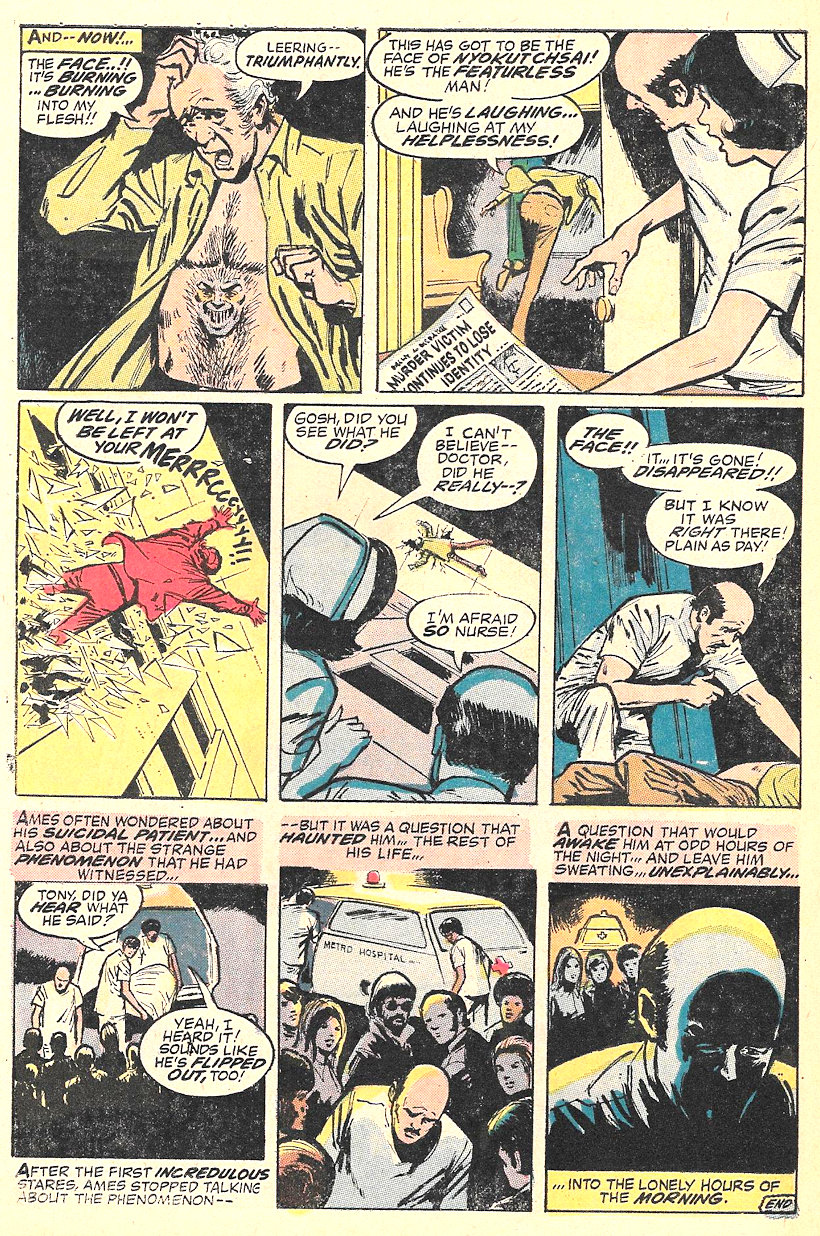 Sorry to end on such a sad note as that final story, but glad I discovered this volume of Journey into Mystery. May have to seek out issue number 5 to read the follow-up Bloch tale.

Until then, mask up everybody and have a safe and socially-distanced Halloween!


Posted by SonOfCthulhu at 9:57 AM