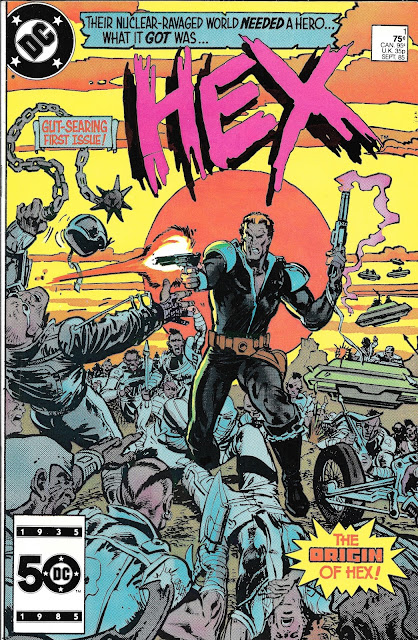 A Western hero gets the Mad Max treatment because?...It was the 80’s

Jonah Hex first appeared in 1972’s All-Star Western #10. This was volume two of that title, the first itineration of which came about in the 50’s due to a decline in superhero comics. It would be a short-lived resurgence, as it was retitled after 11 issues. Jonah Hex featured prominently in the book and the new name, Weird Western Tales, reflected his look at least.

Jonah’s origin is long and as convoluted as a sidewinder. The origin story most commonly associated with the character as we know him deals with him being a Lieutenant fighting for the confederate army during the America Civil War. He befriended a fellow solider by the name of Jeb Turnbull, but by then Jonah’s feelings about the treatment of slaves had already started to bother him. He surrendered to the North to wait out the end of the war by sneaking into a Union officer’s quarters to give himself up. Although he would not give up information about his comrades’ whereabouts, an orderly figured out their position by the mud on Jonah’s boots.

His unit was captured and the officer who had grilled Jonah so thoroughly made a public display of thanking Jonah in front of his captured men, marking him as a traitor in their eyes. Due to a shortage of food supplies, the captain next arranged for Jonah to help these same men escape, only so he could shoot down his prisoners in cold blood. This was the “Fort Charlotte Massacre,” Jonah was one of a handful of survivors, but now he was twice branded a traitor.

Jonah returned to his adopted Indian tribe…(wait, what? Yeah, he was adopted and raised by the chief of a tribe of Native Americans and then cast out over an altercation with his wicked step-brother)…to settle a score with Non-Tante, his step-brother. After failing to convince the chief of his son’s evilness, Jonah is forced into a trial by combat with tomahawks. Non-Tante rigs Jonah’s to fail in the fight, Jonah figures out he was setup and kills Non-Tante with his buck knife in front of the entire tribe. For breaking the rules of combat the tribe gives him the “mark of the demon” by pressing a heated head of a tomahawk against his right cheek. He is then cast out from the tribe.

Now homeless and friendless, Jonah became a bounty hunter and got to spend close to a hundred issues living in the wild, wild west.

And then the Crisis on Infinite Earths happened, and his series was cancelled.

By the following year, this series debuted with the title shortened to just his last name. And the setting radically changed. Radically.

In issue 2’s letter’s column, Michael Fleisher admits to this being his idea. In his version of events, he asks DC vice president-executive editor Dick Giordano for permission to bounce Jonah Hex from the wild and wooly west to the post-apocalypse in a meeting that first has the DC head apoplectic and finally accepting (with the added cavoite of Giordano opining that Fleisher jettison the comics code approved status as well.) Fleisher’s version starts over a year ago with Ed Hannigan designing the book’s cover logo and giving it to Fleisher in hopes he could use it for “something”. The gaudy pink “HEX” had no real place on Fleisher’s current western tales of the bounty hunter he had created, but it started Fleisher’s wheels spinning.

For a long time I’d been wanting to write about a bleak, war-torn world where civilzed moral values are dead; where government has collapsed and anarchy prevails; where death can rain from the sky or slither forth from the bowels of the earth; and where, when the going gets hairy, there are no hordes of costumed men and women – “Flying Albert Schweitzers,” I have heard Howie Chaykin call them – to haul your keester out of the fire. Fleisher wrote.

And the reboot of Crisis gave a fresh start to so many characters and concepts that Fleisher’s idea was green lit.

My thoughts on this issue are below, but for another view, give Professor Alan over at the Quarter Bin podcast a listen.

How does all this transition? Pretty well, actually. Better than the prevalence of these issues in back issue bins would have you believe. A young Mark Texeira cuts his teeth on pencils, giving the book a gritty believability. The story from Fleisher proves intriguing, as the old west and the road warrior setting are pretty much the same level of lawlessness. But enough chatter from me, let’s watch as Hex wakes up not exactly sure of his surroundings. 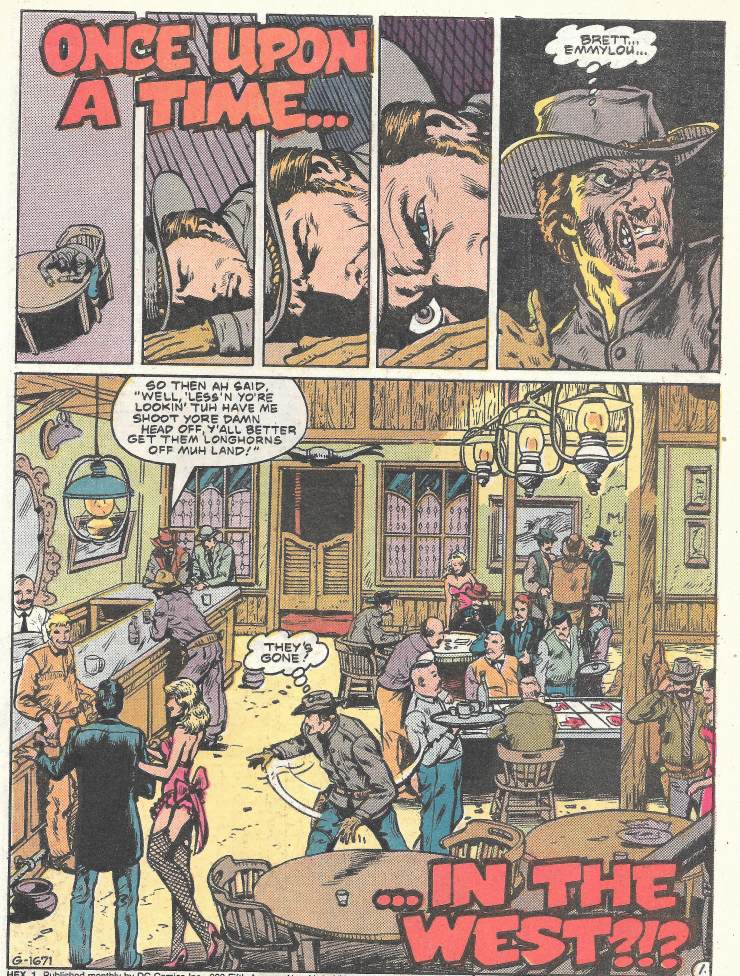 Even if he isn’t, the saloon doors soon admit someone he does recognize. It isn’t a found acquaintance, however.

Seeing his victim blasted into unimaginably complex clockworks messes with Jonah’s head. He was only given one round to toy with too. He drops his gun and runs from the bar… 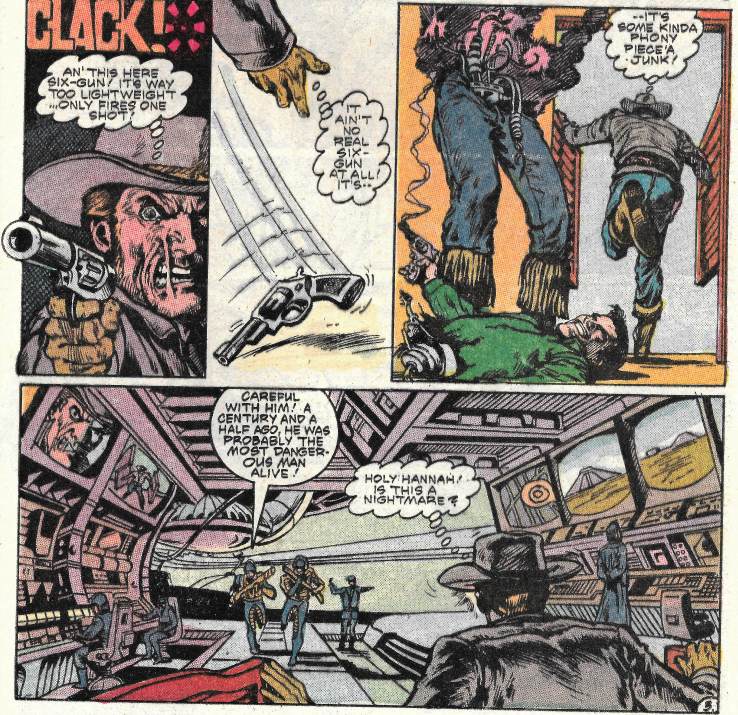 …and into the viewing room of a 21st century lab designed to monitor his progress in the simulation.

Hex is stunned and brought before the person who has time-napped him, who begins a long holographic introduction to warriors of the past that he has collected… 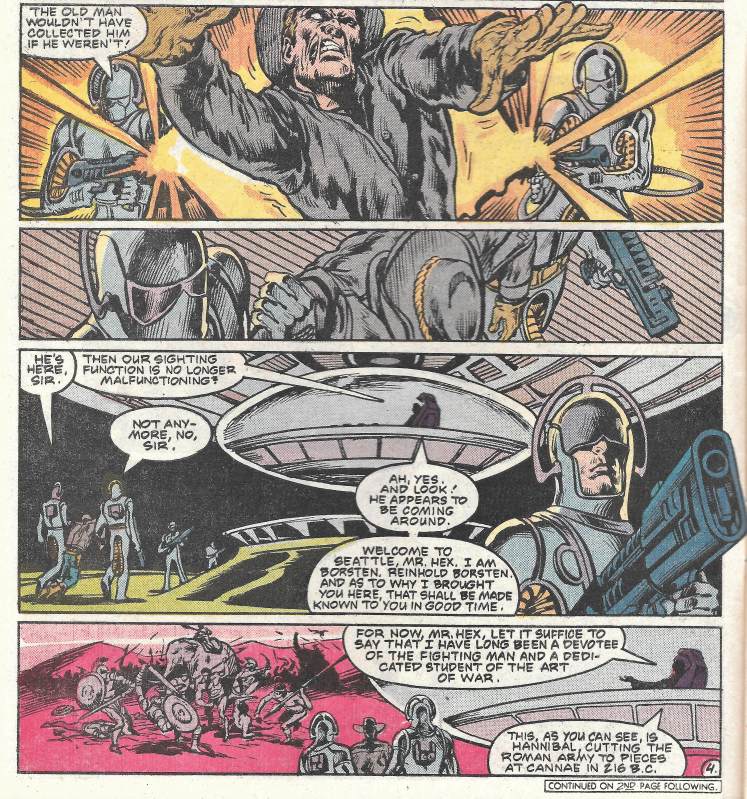 …and the past apocalypse that has occurred to the world. Unfortunately, all of this too much for the poor time-displaced cowboy to take in. 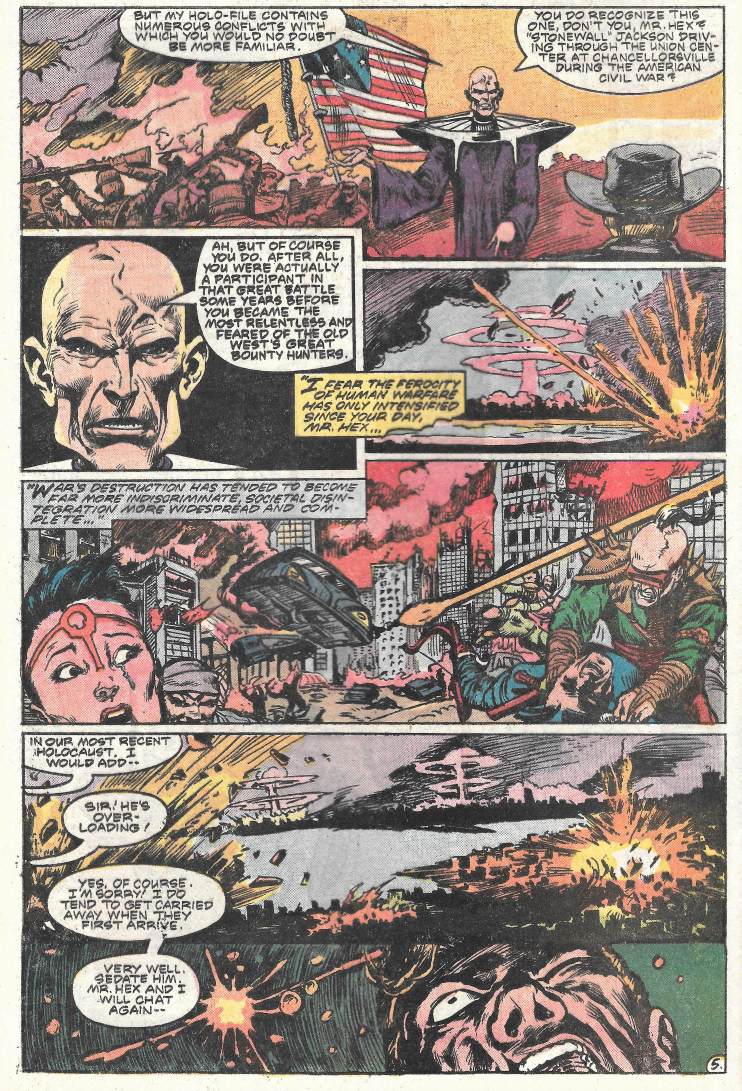 The techs sedate Jonah and dump him in a giant test tube. Which, I’m gonna say, not the smartest of ideas to house your tactical geniuses in giant glass test tubes. 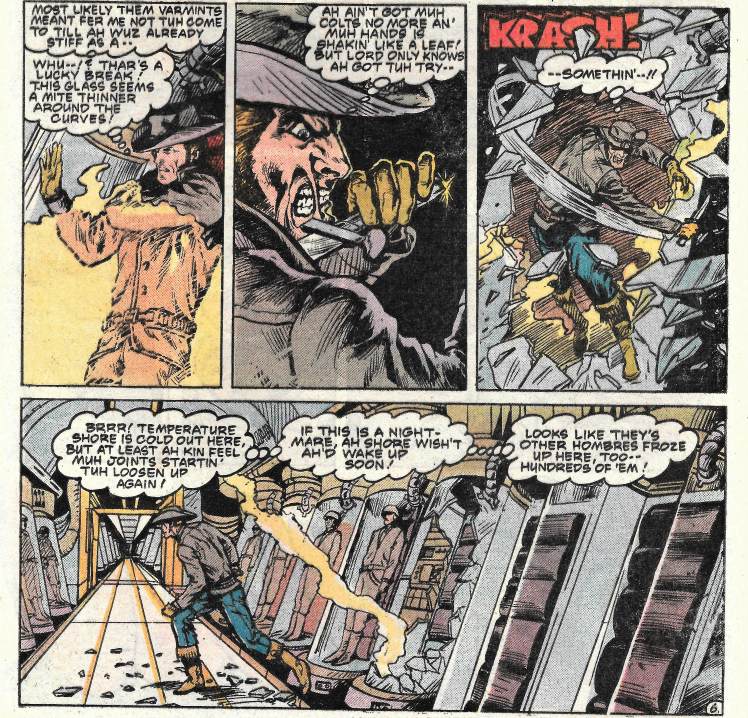 And it’s also a bad idea to store your weapons right next to your captured military-minded soldiers. Because they will turn that shit right around on you, pronto. 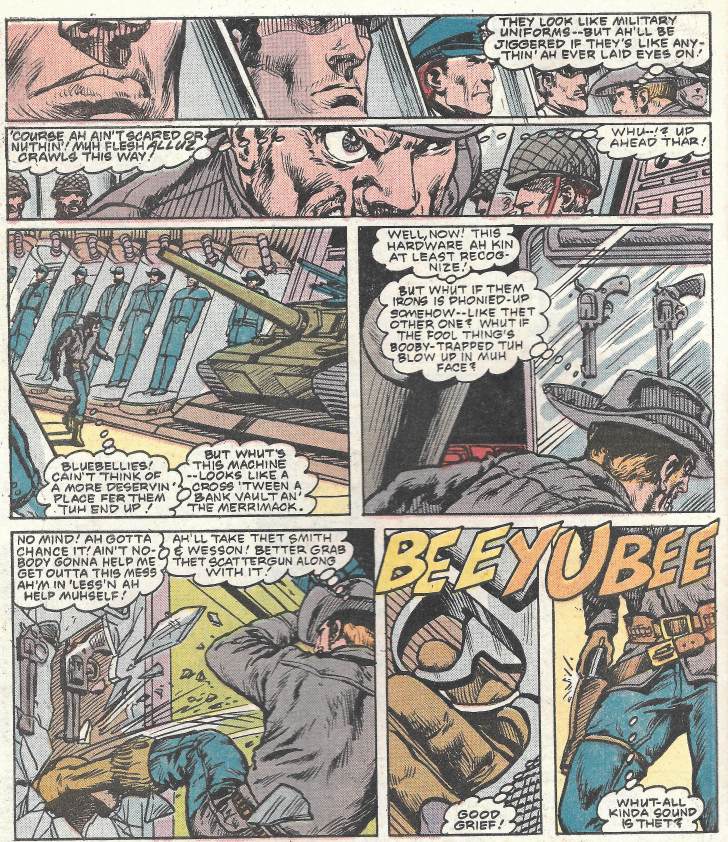 Hex spends the next few pages outwitting a few guards so that he can escape the facility on the underside of a garbage truck. 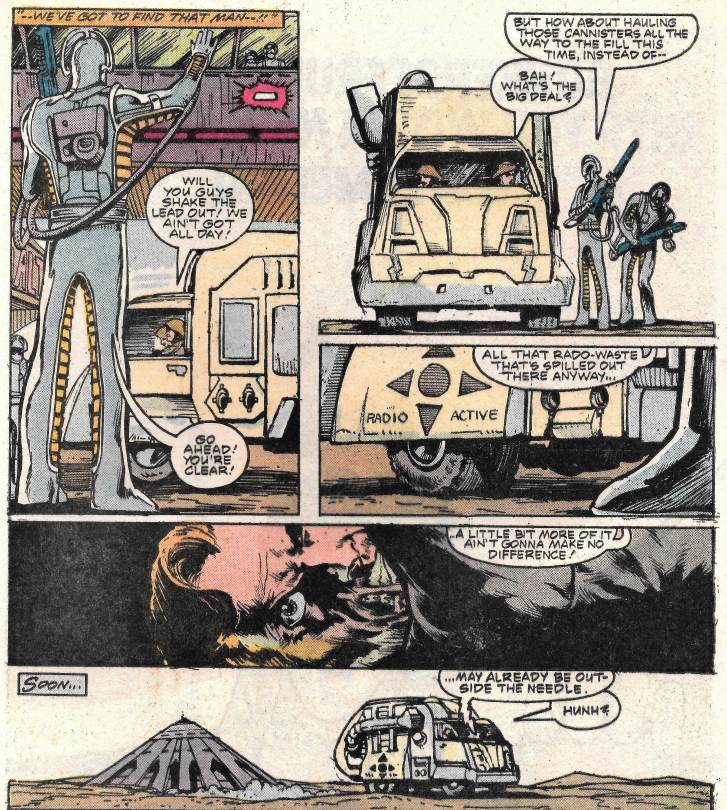 Which works out fine until they are radioed with news of his escape and a reward for his capture. Then they realize he just rolled off the back of their vehicle and they pursue him. 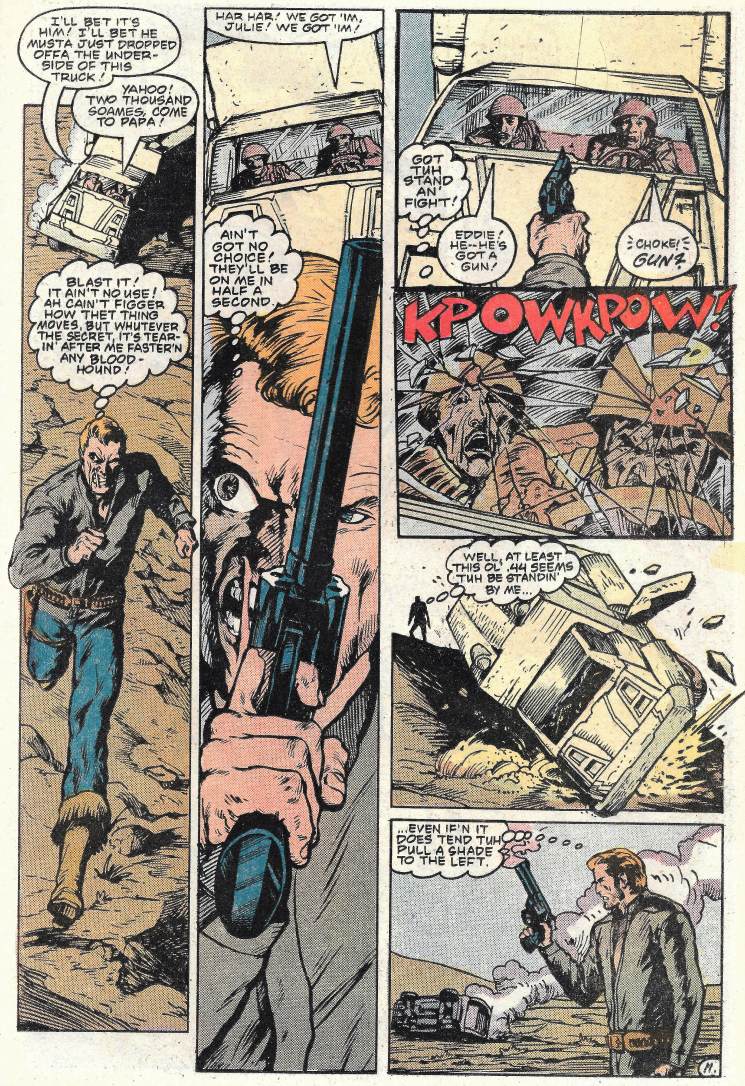 Which ends badly for the pair.

In wandering these wastes, Jonah comes across three Mad Max rejects about to kill someone dressed like a space hooker. So, typical day in the post-apocalypse, is what I’m saying. 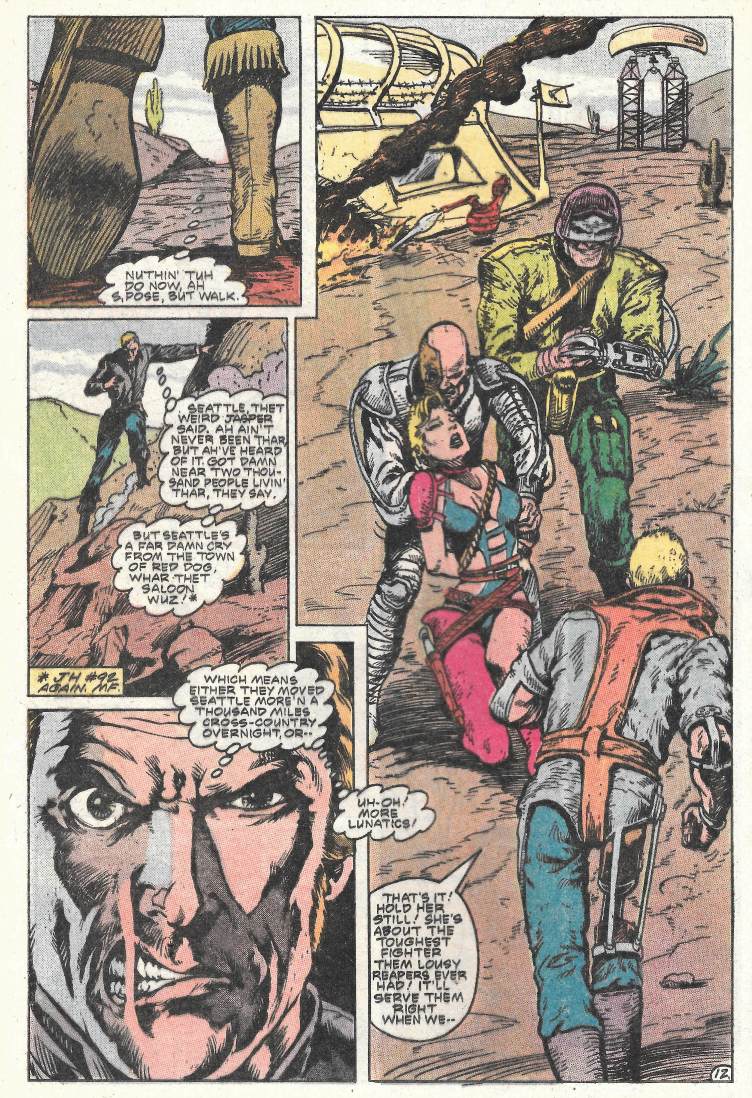 The woman shows spunk, so Hex frees her from the varmits. 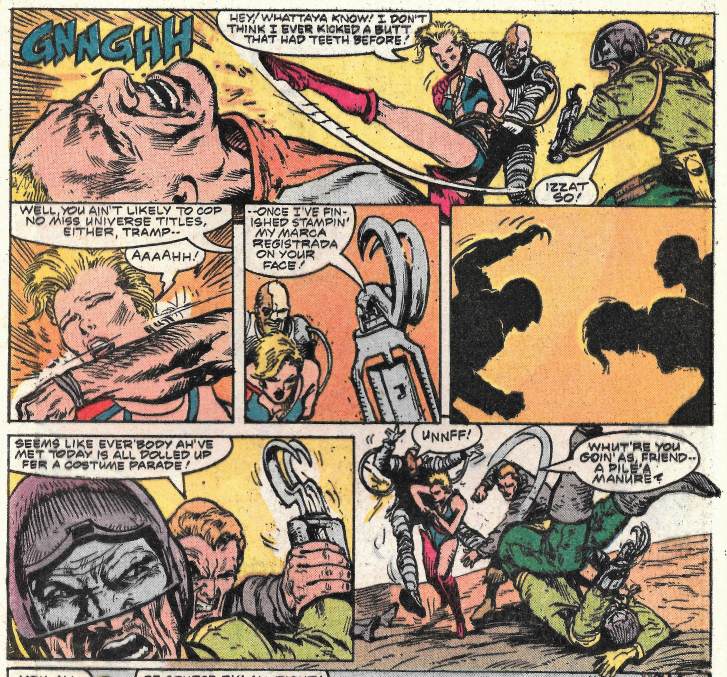 And scares them so bad that they continue to stand with arms raised even after he’s yards distant or something. (I just found that middle panel funny for some reason.) 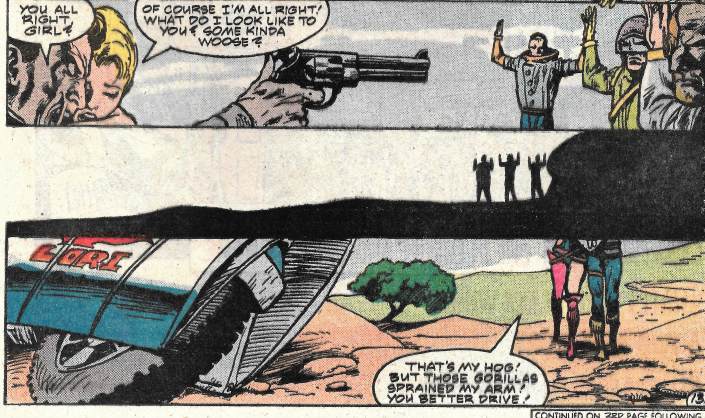 Hex and the girl make off for her gang on this odd bike she has, but because she’s so beat up, Hex has to drive. Stiletta mentions that he’ll need a Rad Suit to survive in the acid rains that cover this part of the plains, a plot point that will come up later. Love Jonah’s answer to her question about how he gets around. 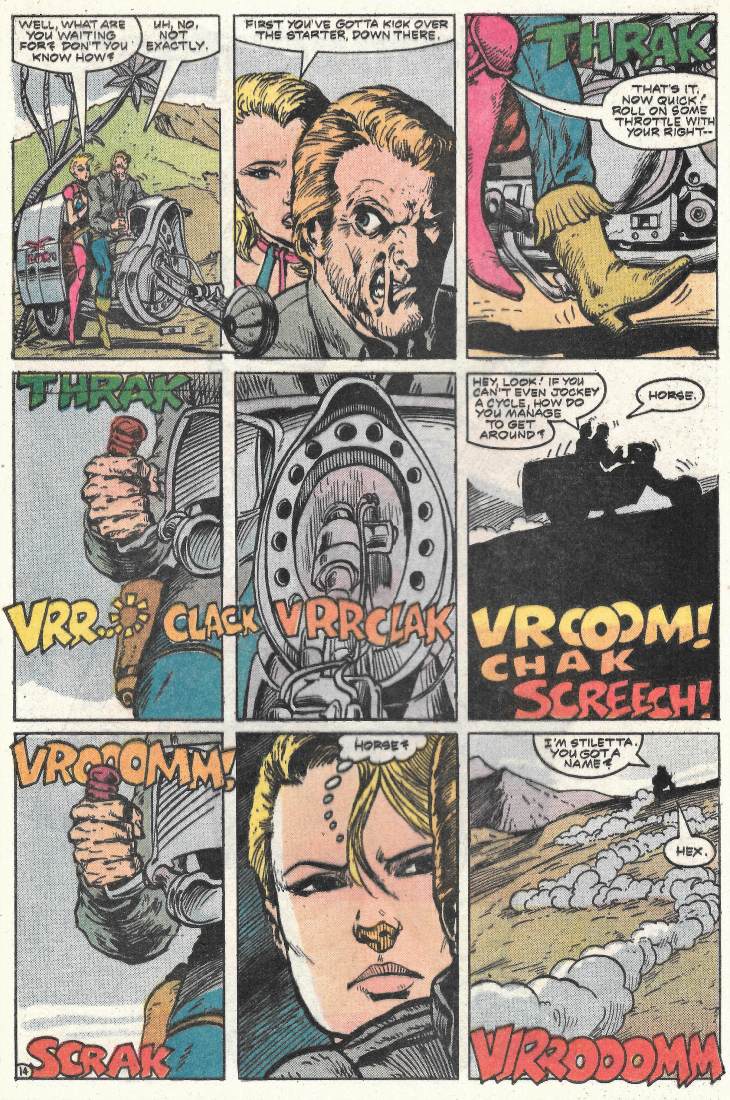 And Stiletta’s gang is this pack of jerks called the Reapers, which are pretty much your standard Road Warrior guys in more colorful costumes. And I don’t mean the good guys from Road Warrior either. 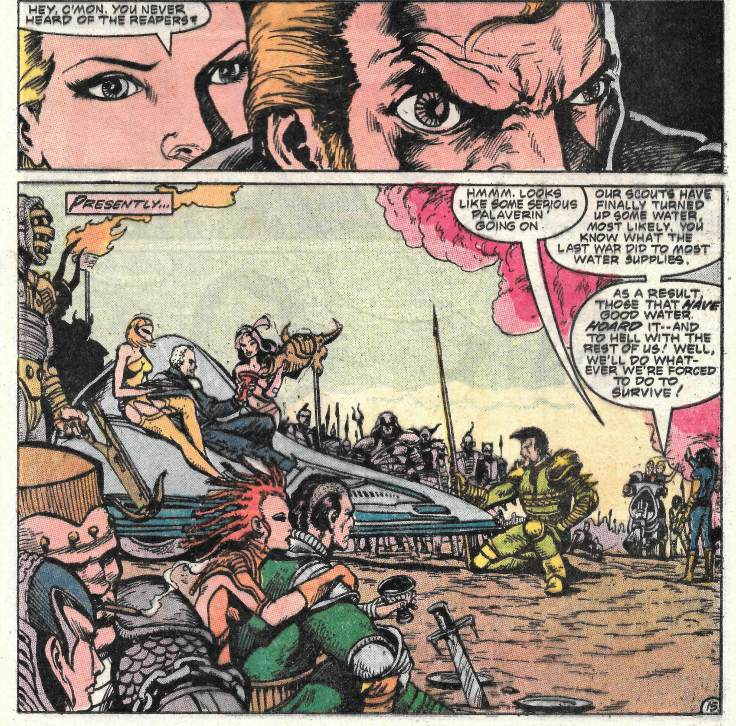 The Reapers are planning on attacking a town to steal it’s water supply, which we will find out how Hex factors into that in just a minute. But first soak up the fact that they offer Hex a share of their grub which happens to have more in common with a grub worm that standard food. 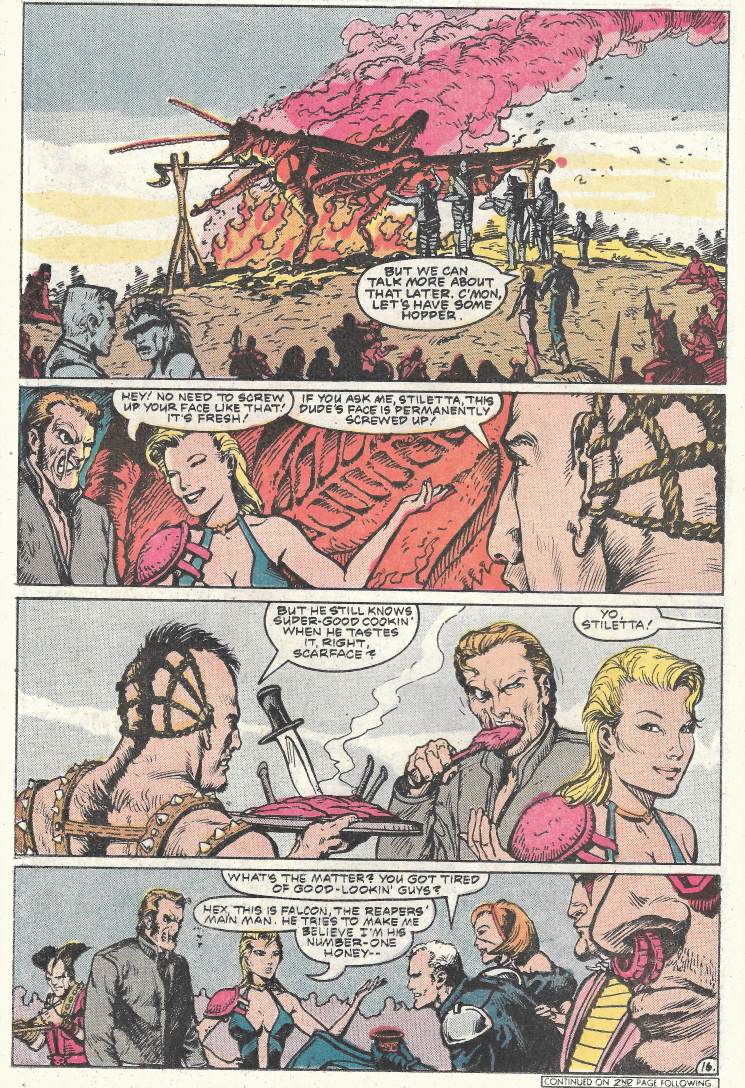 Say hello to the leader of this pack of wild dogs, and Stiletta’s former flame, Falcon.

Stiletta does everything she can to make Falcon jealous of Hex, which might just have signed his death warrant. 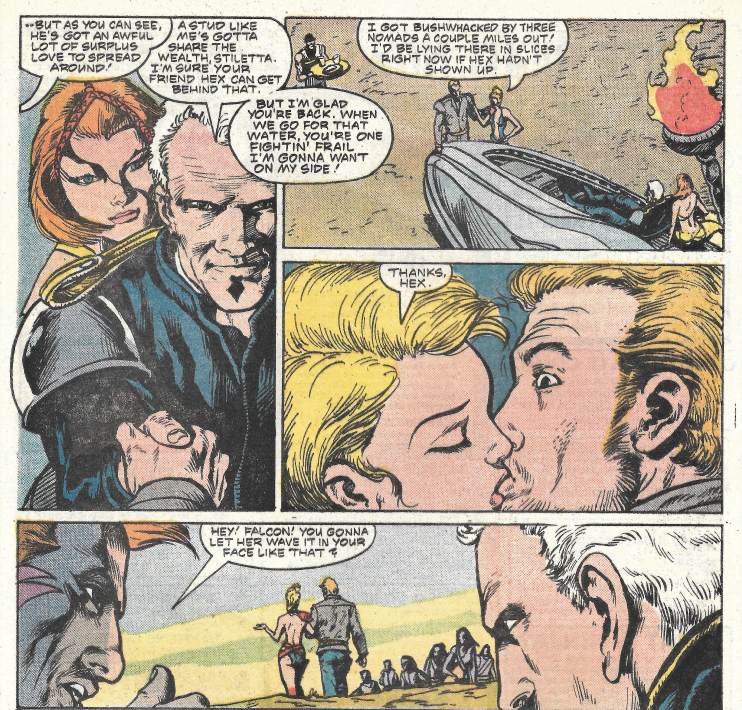 Indeed, he is not.

Hex starts to have second thoughts about joining this side in the coming conflict and brings up his concerns to Stiletta. Meanwhile the village they are going to attack has been tipped off which bodes ill for the Reapers doing a quick in-and-out run.

Faster than you can start humming the ending chase music from the Road Warrior, our pack of raiders is on the move toward the village. Hex hangs back, torn between being alone and his sense of right and wrong. 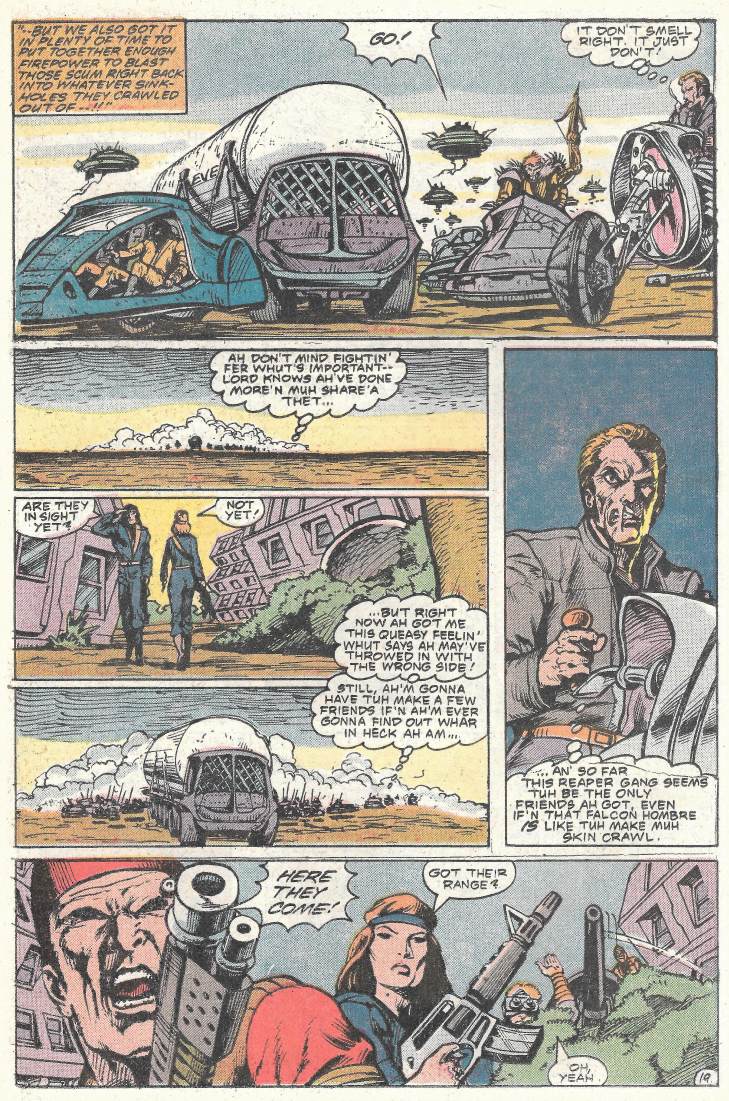 Lucky that he does, as the mission is a bust with lots of causalities in the first wave. Hex’s bike is hit and he is left with no transportation. 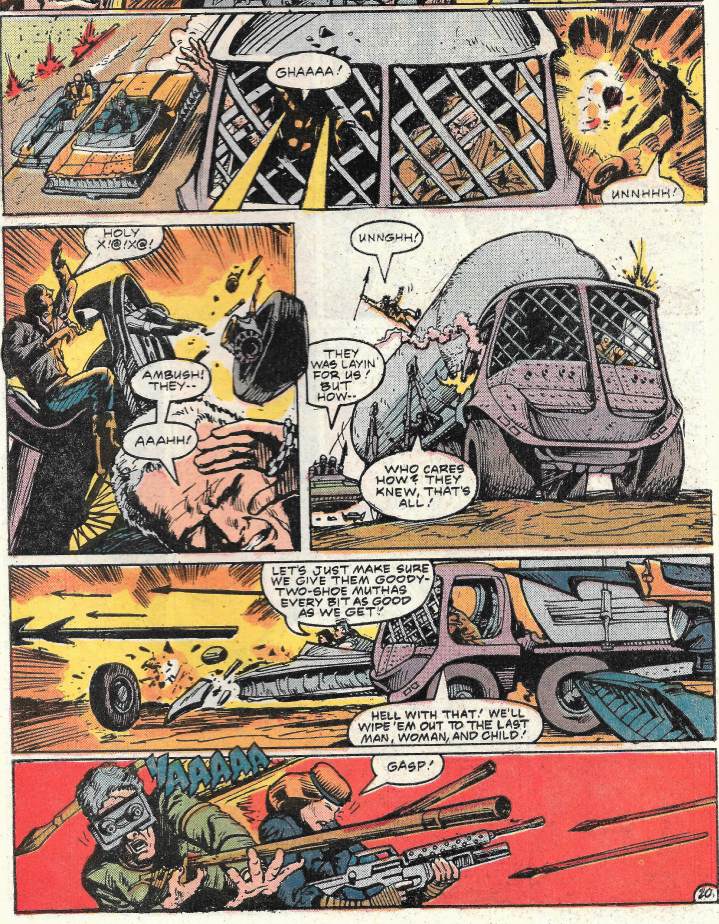 If you come to the book looking for action and explosions, you get your wish. The tanker is destroyed along with any hope of carrying the water back with them. The mission is a bust and Falcon ends up trapped in bunker while the villagers try to burn them out. 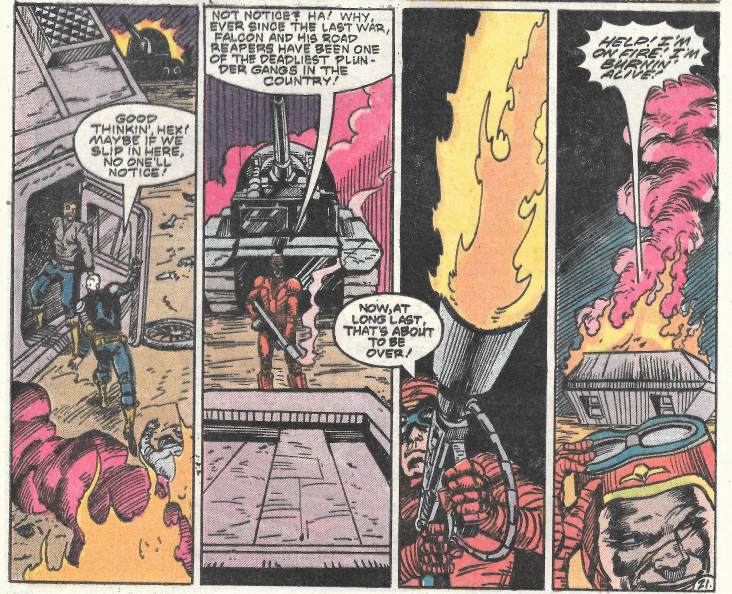 Hex gets them out with some quick thinking, but as they jet off in some kind of motorcycle with sidecar, Falcon decides to double-cross Jonah. His aim to leave the gunslinger for the villagers fails as Jonah sends them both tumbling from the vehicle. 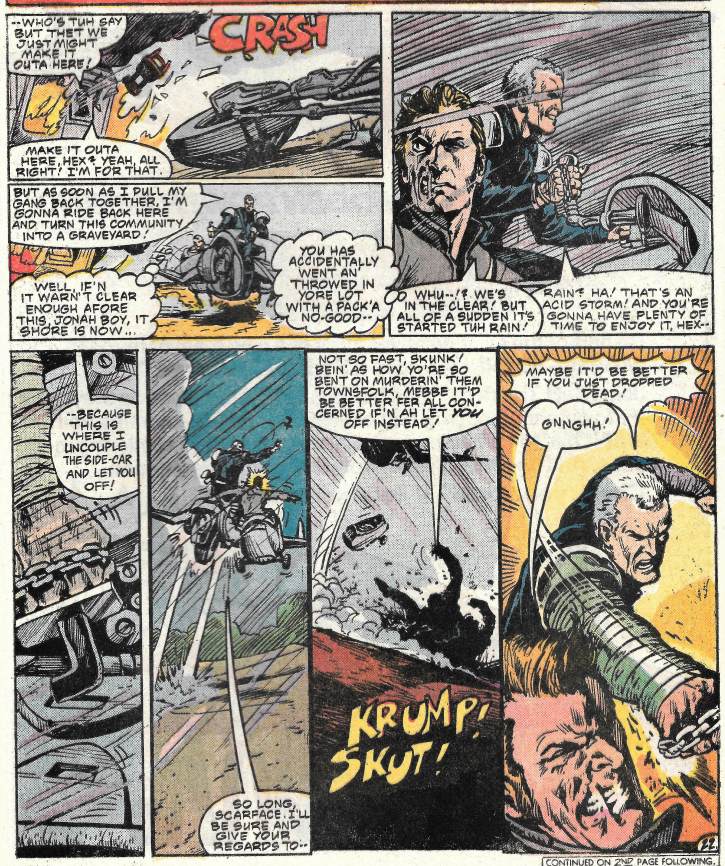 The pair tussle as a driving acid rain begins. 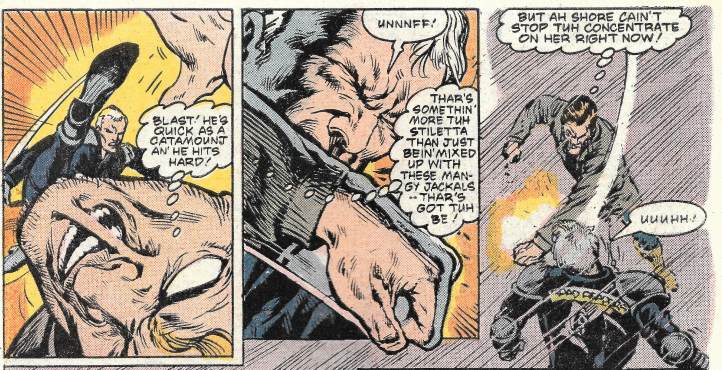 Hex ends up on top and knocks Falcon out. He steals the leader’s jacket to stop the burning he feels from the acid rain. Hex figures Falcon is knocked out so the stinging can’t hurt him. 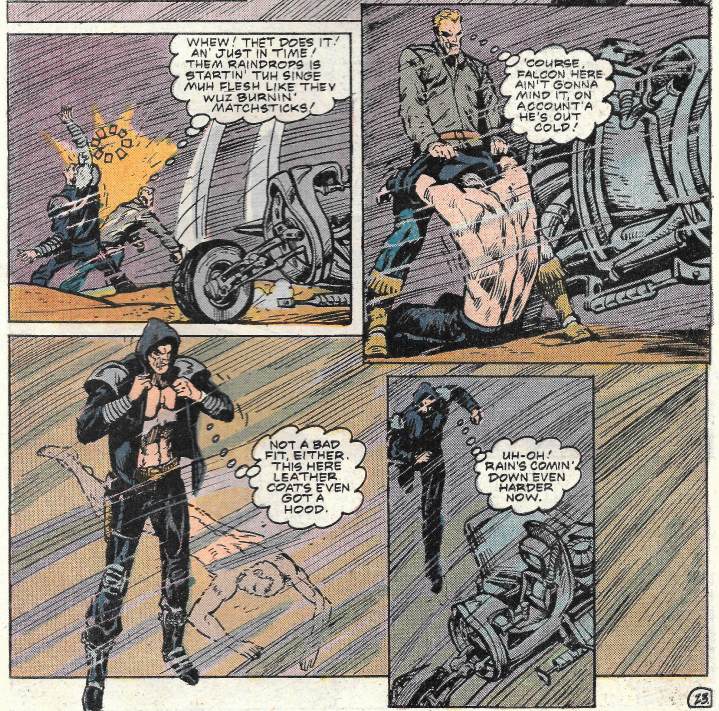 But the rain picks up to a torrent and it MELTS the Reaper’s leader after Hex drives off. Wow. It Melts the bad guy. That is some meaner than Wizard of Oz stuff there. 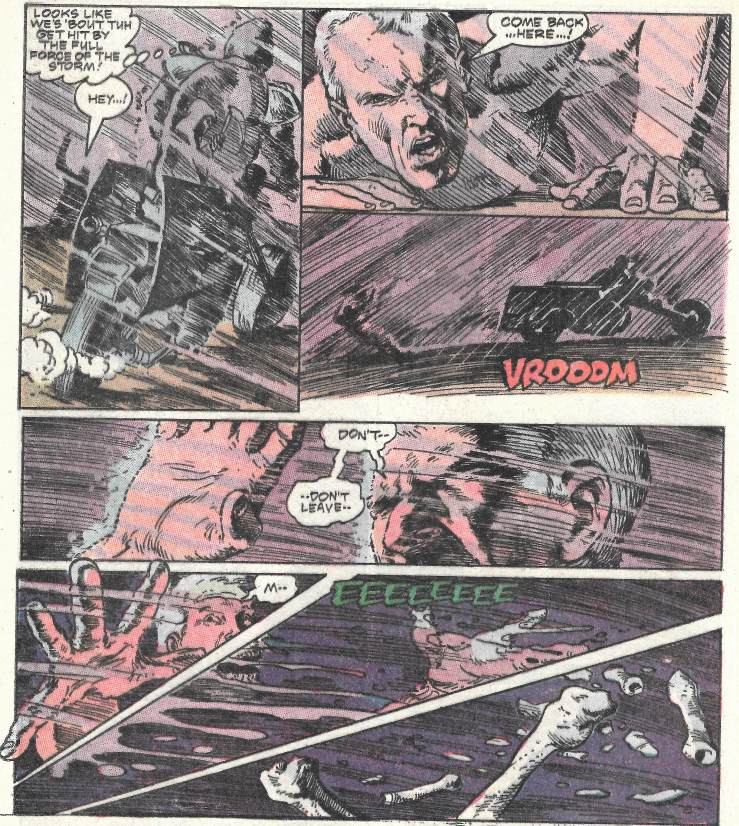 Hex isn’t in the clear yet. As the issue exits, the Vietnam hardware Hex’s host had been waiting for arrives…in the form of a helicopter gunship that has its sights set on taking Hex out. 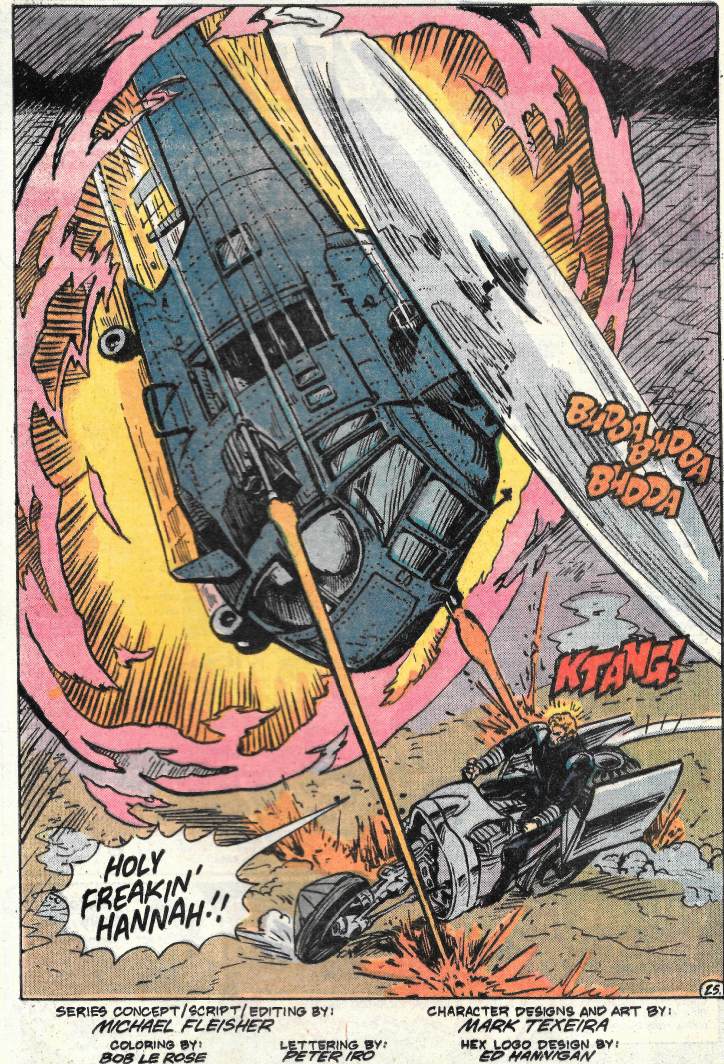 I liked this way more than I expected. Hex is a hard character to like. With a puss like his, it is painful to even look at him in most panels. The art in this is great though and Fleisher looks to be building some great story concepts.

The only sad part is that this only lasted 18 issues before they reverted Hex back to the west. And while I long to find those Vertigo titles, as they were horror-western titles, I think this version of Hex was a good fit for the character and lots of fun. True, Keith Giffen came in late in the run and put his very cubist, abstract bent on the art, which is kind of an odd flavor, but still I would have loved to see how much further they could take Hex in this setting of cyborg dogs, acid rains, and biker gangs. Pity.
Posted by SonOfCthulhu at 2:50 AM