The Fairer Sex, Part XIX, Between the Cracks: The Bride 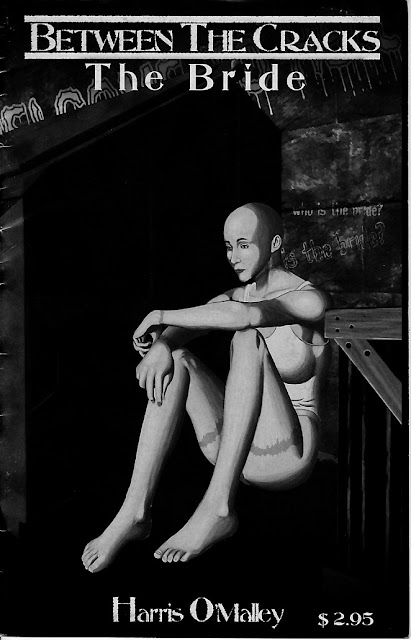 The true story of Frankenhooker

Here I go again, messing with someone from right down a local freeway. Between the Cracks: The Bride is the work of one man, Harris O’Malley. O’Malley is a phenomenal painter who lives in San Antonio, a city less than a four hour drive from D/FW. He’s the mastermind behind a small publishing house called Studio Underhill and has been making commercial art since 2003. I really urge you to visit the Studio Underhill website HERE and check out his recent artwork.  It’s truly a thrill. Also you can find links to more on his livejournal blog HERE. Note some nudity, so it’s all NWFS.

I’m really jazzed about O’Malley’s painting, so it’s really a shame to be reviewing BTC:TB. Why? The Bride looks to be his first work. While it shows hints of what O’Malley can do, it unfortunately falls short in many places. Sometimes it is pacing and sometimes it is the art. I can excuse it when the plot drags, but I am absolutely livid when I see bland panels coming from a guy who can do so much better.

The story is a retelling of Frankenstein with a few twists added in. First change is the setting. O’Malley has decided to switch from turn-of-the-century Europe to modern-day urban America. Next is the nature and sex of the creature. Our creature is decidedly female and quite passive. Lastly is the thrust of the story has switched from what her creator can do to redeem himself to a story about how, with few exceptions, modern man is actually the monster.

We begin with the title character sitting on a dock, reflecting on her resurrection and the events that followed. Notice a couple of things about O’Malley’s art and story style here. Most of the book is wordless panels like these that allow O’Malley’s art do most of the storytelling. There are times when this is very effective and then there are times when it shows his style’s limitations. His black and white art is very stark and uses very little grayscale shading. Occasionally this renders a frame too dark or a room too spare. He throws a few scanned photos and digital art pieces in a few panels to overcome some of this, but the result isn’t always successful. His color pieces on his website show how emotive his work can be. It’s a shame that we don’t get that impression from his work in The Bride. 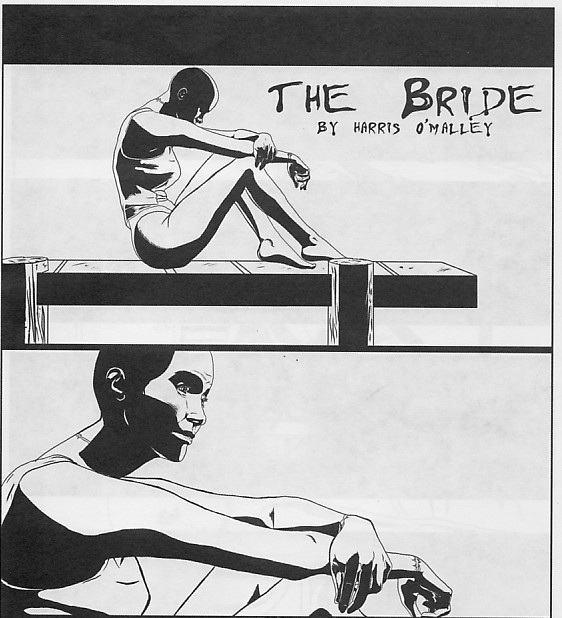 Everything following the first page is a flashback beginning with The Bride’s first sights after being revived. 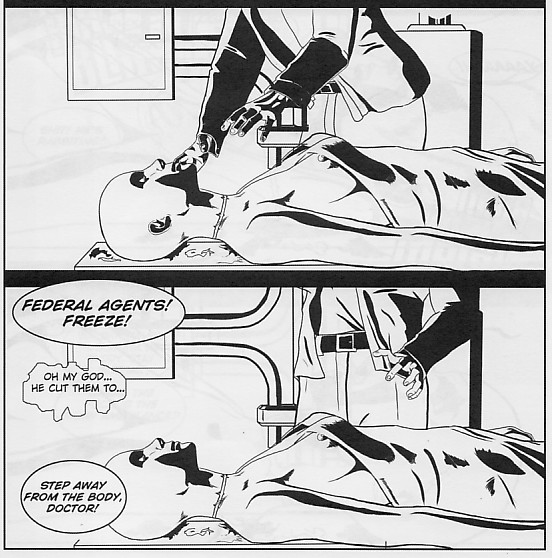 The faceless creator is never shown, his fate is sealed off panel. 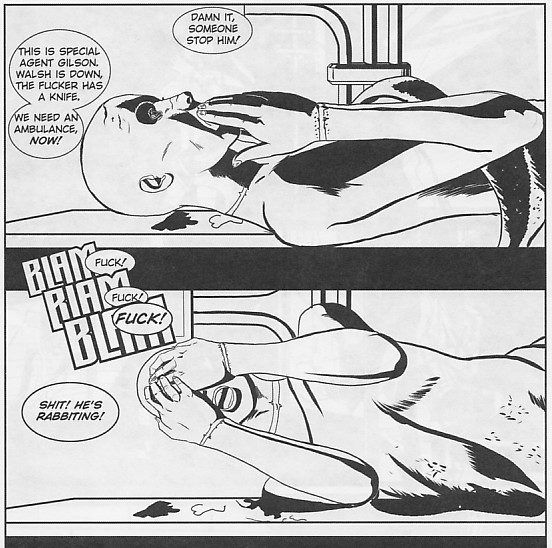 Thus the widest divergence from Shelley’s tale takes place very early on. Our creator is out of the picture (quite literally as well) and we are going to focus on the plight of his creature. O’Malley’s art is not trying for a realistic feel, choosing instead to give the impression of real life. Perhaps this is a metaphoric statement on The Bride’s condition as well. She is not really alive, having no parents nor home nor identity, but is instead a stark and solitary figure facing the world completely alone. The metaphor works, but the plotting drags a bit by its inclusion.

The federal agents don’t notice The Bride's disappearance. As she wanders out into the city, she narrowly avoids being struck by a passing car. She crawls to the sidewalk and sits against a brown stone building. Two young men stop to help her. 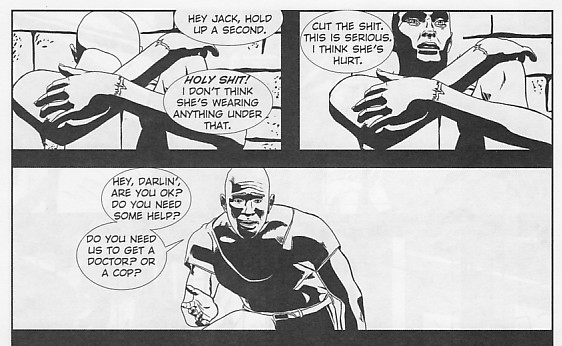 This will be the last time anyone in the book is sympathetic to our title character. But even these good Samaritans are turned off by her odd appearance, judging her as potentially mentally unbalanced. 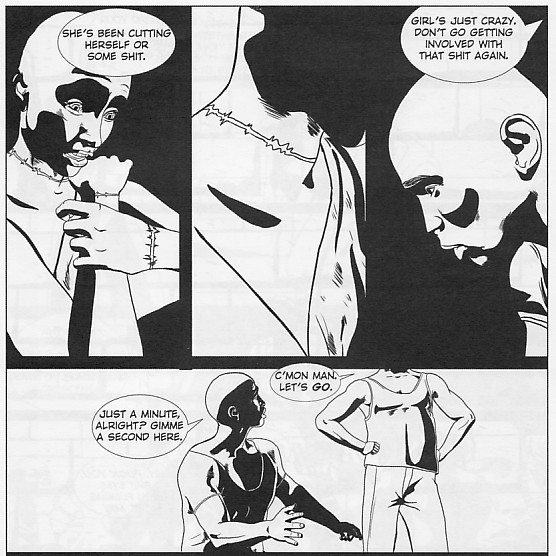 The message here is clearly that even good-hearted people will only go so far before stopping in their own rational self interest. The best our pair will do for her is slip her a few bucks and tell her to get some help. Her next encounter is entirely the opposite. 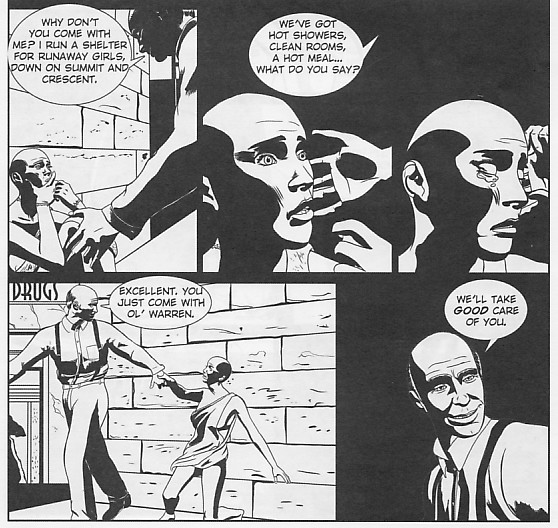 Yes, this gentleman is definitely up to no good. He’s got that evil look from every “teen girl runs away from home” movie I’ve ever seen on Lifetime. Hey, it’s not just a channel for women. Warren does exactly what we expect, first locking The Bride in a room with only a bed and then “explaining” to her what she will have to do to pay for room and meals. 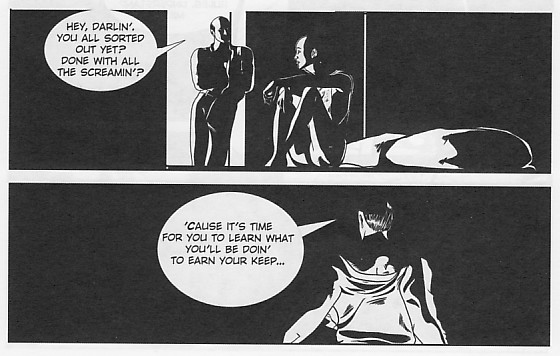 Yup, Warren is a nasty pimp-daddy. The Bride is forced to endure sleeping with him, an experience that paves the way to him prostituting her out to others. She has brief memory flashes of her prior life, but the nightmare of the here-and-now blots them out. All of that changes as Warren sends her out with an expensive client. 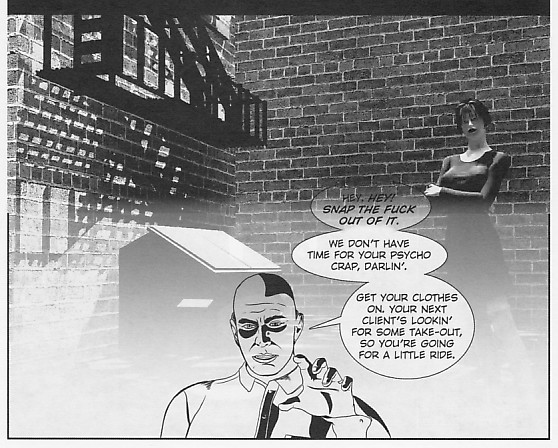 Driving an expensive sports car and dressing in a tie, We get to meet douchey yuppy dude. Douchey yuppie dude doesn’t get that The Bride is doing this against her will. He assumes she’s eager when she huddles near him during the drive. The cause is her repressed memories starting to flood back to her spurred on by images in store windows. Yuppie boy can’t buy a clue.
So when The Bride doesn’t respond to his sexual performance with wails of delight, he’s quite upset. Never mind that up to this point we the audience haven’t heard her utter a single syllable and have, in fact, come to the conclusion that she may be mute. Stud muffin of course just believes the sex isn’t rough enough and takes things up a notch. 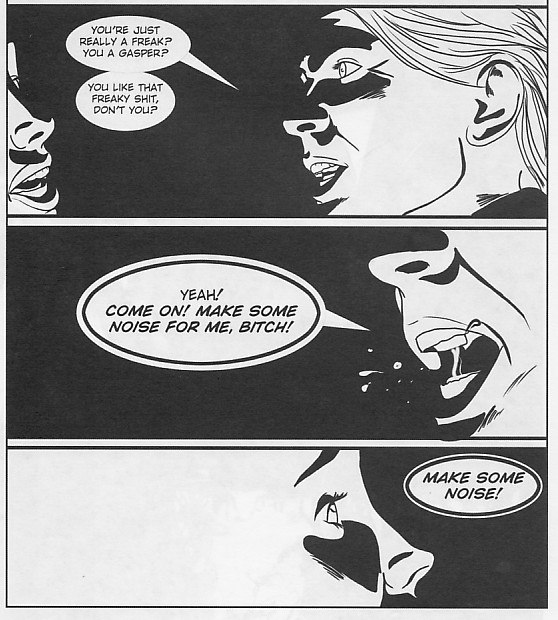 It looks like she’s about to be a motionless guest at the local morgue yet again. But right before she passes out, her life flashes before her eyes. Or in the case of a girl made up of hunks from several different people all sewn together, several unrelated girl’s lives pass before her eyes. In one giant two page montage. 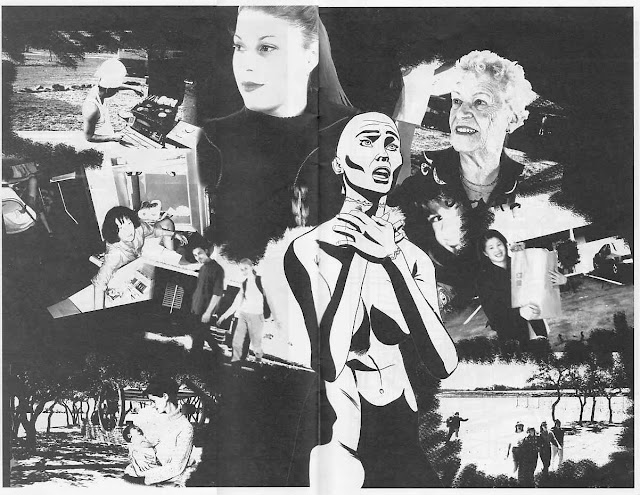 Heh! I don’t know where the artist got some of these pictures, but most of them crack me up. Like the bar-b-que in the upper left. The reason that’s included is because this guy is giving her the sausage. And the Asian woman on the middle right is thinking “Where did I park my f’ing car?” Meanwhile the lady with the baby lower left is trying to decide if it’s appropriate to breastfeed in public. Barbara Bush really hates J-Lo is the message the top middle-to-right figures give me. But it’s really all just a call for The Bride to wake up and do something to take control of her life. She’s been given a second chance. She should make something of it. And so she does, starting with pushing the john out the nearest window.

No weeping for him, he got what he deserved. As The Bride flees the scene, I suddenly became hopeful that this tale might have a happy ending. No such luck. The bride squanders her “get out of the grave free” card by nosediving off the dock into the river. Our last shot of her is her drowning while reaching up for a white light.

O’Malley came out with a second “Between the Cracks” comic the same year (2003). It was called Between the Cracks: All Miracles Have a Price and Comicspriceguide.com lists it at almost $16. I guess it was superior to this title, because there’s no miracle here. Let’s give The Bride her last rites and let all of her pieces rest in…uh, peace.

Posted by SonOfCthulhu at 3:11 AM