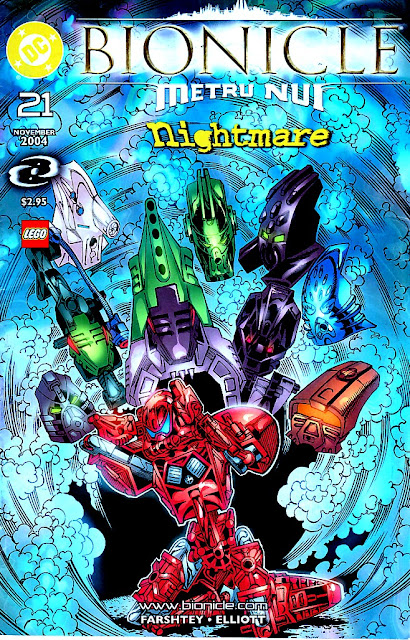 
Newsflash: Chris is on Infinite Earths is also featuring a Bionicle review and I really dig Chris' stuff. You will too. Check him out by following this link.

In 1932, something was awesome in the state of Denmark. That’s when the work shop of Ole Kirk Christiansen decided to change its name to “Lego”. The new name came from the Danish phrase leg godt which means “play well.” The wooden toyshop would switch to producing plastic toys in 1947 and two years later would create the now famous interlocking bricks. Originally called “Automatic Binding Bricks”, it wasn’t until a 1958 redesign under Christiansen’s son Godtfred that they took on the look of the familiar hollow peg blocks we today simply call Legos. 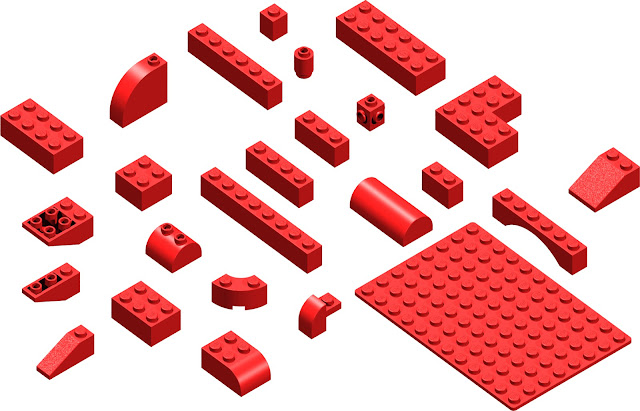 Literally hundreds of playsets later, Legos are still going strong and have had product tie-ins to Star Wars, Jurassic Park, Harry Potter, Spider-Man, Batman, Spongebob Squarepants, Ferrari, Scooby Doo, Doctor Who, Portal 2, Lord of the Rings, Toy Story, failed Disney movies The Lone Ranger and Prince of Persia, the Simpsons and Avatar: The Last Airbender. Additionally, they’ve produced sets for older kids in their ultra intricate Technic line and high tech motorized Mindstorms products. They also created toddler sets under the Lego Duplo label. But very few of these projects are as ambitious or as inventive as the Bionicle series. 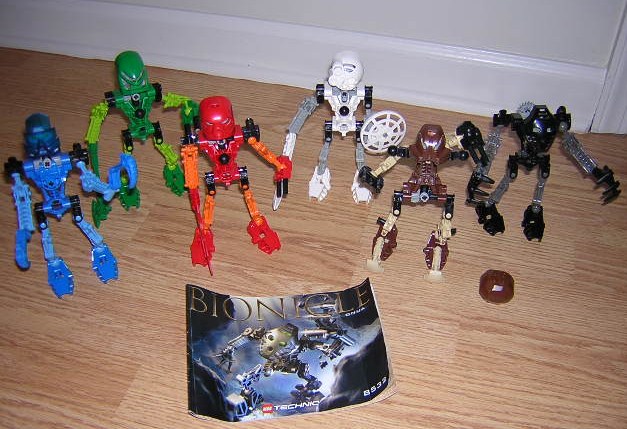 Bionicle was the first Lego series to get a background story developed in-house. Using elements of Polynesian mythology, Bionicle the brand was designed to last multiple years which is another first from a company that likes to restart product lines yearly so they remain fresh. The Bionicle plan involved seven multi-year story arcs which were meant to give the product line a shelf life of twenty (yes, your heard that right. 20!) years of storyline and product tie-ins. 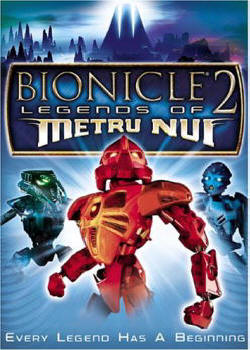 The backstory was being developed in direct-to-video DVDS (three of which were produced), young reader book series and, of course, comic books. Most of these were written by Greg Farshtey, who was active in the Bionicle fan community, often showing up on the Bionicle fansite www.BZPower.com. With these channels, Lego had been successfully promoting the line since 2001, and even though it went on hiatus in 2010 it was rebooted in 2015 using toy sets from Lego Hero Factory. 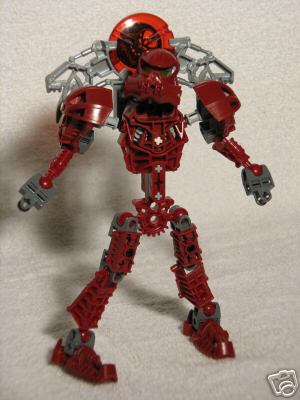 Since most of us (I hope) don’t follow Polynesian mythology, a brief description of the cast in Bionicle may be in order. Our heroes are the Toa. They wear masks of power and can control elements of nature. Their color denotes what element they can control: Red – fire, Blue – water, Green – air, Brown/Yellow – stone, Black – earth, and White – ice. It’s neat how green means air, because with my constant sinus condition I’ve always believed the air is made of green particles too. There’s no other way I can account for the color of my sneeze discharges.

Moving on, the Matoran are the commoners who are led by former Toa elders called Turaga. They are suppressed by the Makuta, who have attacked the Great Spirit Mata Nui, causing him to fall into a deep sleep. Mata Nui is not to be confused with the island where all the Bionicle live that is also called Mata Nui. It is also under the grip of the Makuta. (Confused yet? No? Let’s pile some more on, then.) The Dark Hunters are another villainous group who wield great power for their own dark purposes. Also there is an Order of Mata Nui which serves the great spirit but who don’t always side with the Toa.

In the first three year storyline, the Bionicles defeated the Makuta and found the lost city of Metru Nui. Metru Nui is located far beneath the surface of Mata Nui and its name translates into “Great City” in the Matoran language. Whoever controls the city will have immense influence over things to come because the city must be restored to its former glory before you can wake Mata Nui, the Great Spirit and save Mata Nui, the island and the Matoran. (Everybody still with me? I think I see a few stragglers who are having trouble keeping up. Let’s wait a moment for them to re-read the last few Polynesian terms before we continue on.)

Currently the city is ruled by Turaga Dume who has had the job for over fifteen thousand years. It was once protected by robotic enforcement squads called Vahki. The city was divided into six districts called Metru and each Metru has a different kind of Vahki defending it (thus a different Vahki toy to be sold by Lego. Smart businessmen!) Around one thousand years ago, Makuta (bad guys, remember them?) secretly captured Turaga Dume and took his place. He sent the city's Toa on suicide missions until only the hero Toa Lhikan was left. Makuta also started dealing with the Dark Hunters to help with their plans.

The Makuta released a powerful plant monster called…(Is anyone still listening at this point? Really? Ok then since there’s one of you left, I’ll continue on.)…Morbuzakh (Gesundheit!) on the city’s outskirts. Lhikan found Dark Hunters active inside the city and, already suspicious of Dume’s activities, he gave Toa Stones to six Matoran so they could become Toa Metru. Lhikan was since captured and the fake Turaga Dume made outlaws of the new Toa Metrus.

It’s here that we begin our comic book story, far in the past of Mata Nui: with the new Toa Metrus on the run from both the Dark Hunters and the Vahki enforces, exiled from their own city with the threat of giant monster attack all around them and with a backstory so complicated that no six-year old waiting to play with his Lego action figure will every sit down and listen to. I might be wrong on that last part as there are at least four Bionicle websites around, each with active message boards.

Either way, I’ve done my part in attempting to encapsulate about 40 pages of Wikipedia articles into a few paragraphs of story summary. Let’s get down to business. 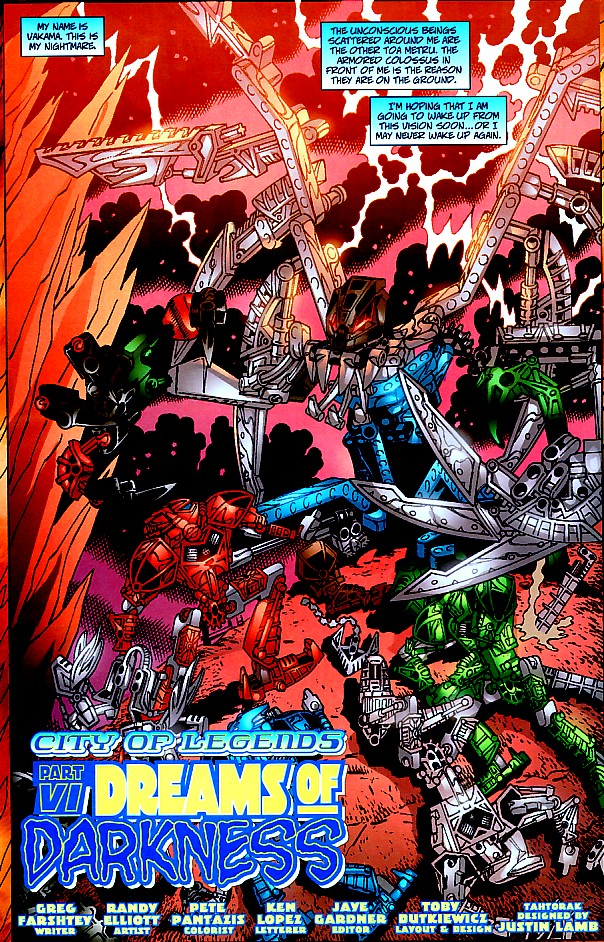 That’s Toa Metru Vakama, the new Toa of fire elements. He (She? It?) is having a vision right the moment, possibly because he dropped acid as a way to escape his convoluted, Polynesian mythos-filled life style. Either that or there’s more things put in that poi than just kalo steams. Either way, he better defeat that nightmare monster or there will be no waking up from this. 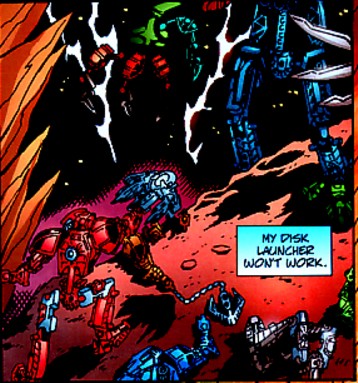 The reason his disk launcher doesn’t work is probably because she’s actually one of the Bionicles included in the McDonalds happy meals. Their shooters never work more than once and then only if you aim the thing straight up in the air. Otherwise the paper disk bullet falls out. I know because our house used to be littered with the things and I was always the one asked to make them work. So sorry, chicka. Next time dream you’re one of the $10 models available at Target stores. They seem much sturdier.

Just as the monster is about to destroy her, a giant fiery hand shoots from its chest and puts the squeeze on Vakama. When she awakes she’s stuck in a spider web. 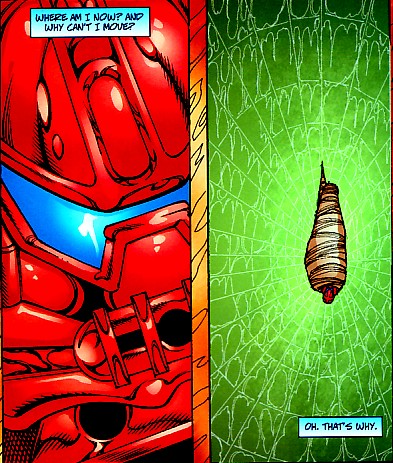 A mechanical spider (who probably has a name like Visorak or something. Hey what do you know? That is its name. And there are like six breeds of the things. And toys made from each one. Who’d have imagined?) comes by and taunts her. Then she is visited by the Toa who gave her the Toa powers, Toa Lhikan. Also Turagma Dume visits in playing her inner “voice of wisdom” and asking her to consider where she is leading the other Toas. Right before the ghosts of Christmas’s Past, Present and Future come on stage, the specters of her fellow Toas begin to make with accusatory guilt-trip talk. 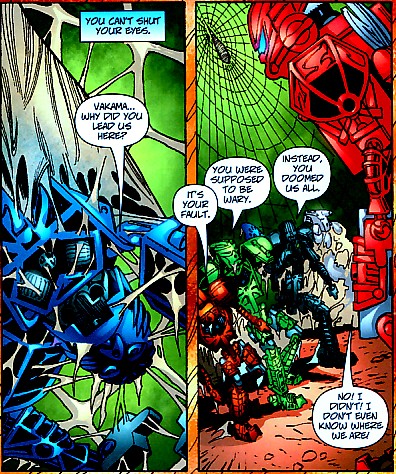 The other Toas force Vakama to look into a crystal mirror that holds an image of the future. The image it shows isn’t revealed only Vakama’s reaction of “No..No…”. This action also has the effect of waking her up from her weird trance. Unfortunately her two companions quickly explain that the real world isn’t much better than the nightmare that was her vision. 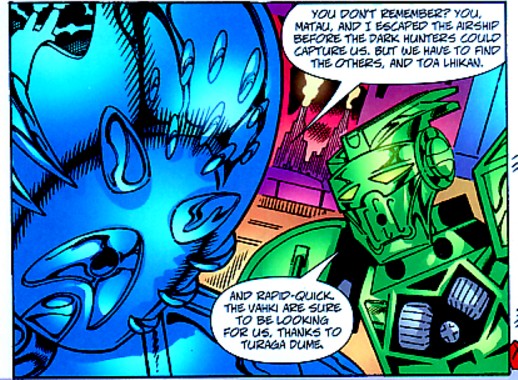 The Vahki quickly arrive on the scene, but not before an earthquake splits open a huge section of the city to reveal a giant Bionicle Lego monster that must cost at least $40-$50 bucks. I mean, look at the size of this thing. I bet it takes 2 to 3 hours to even assemble. 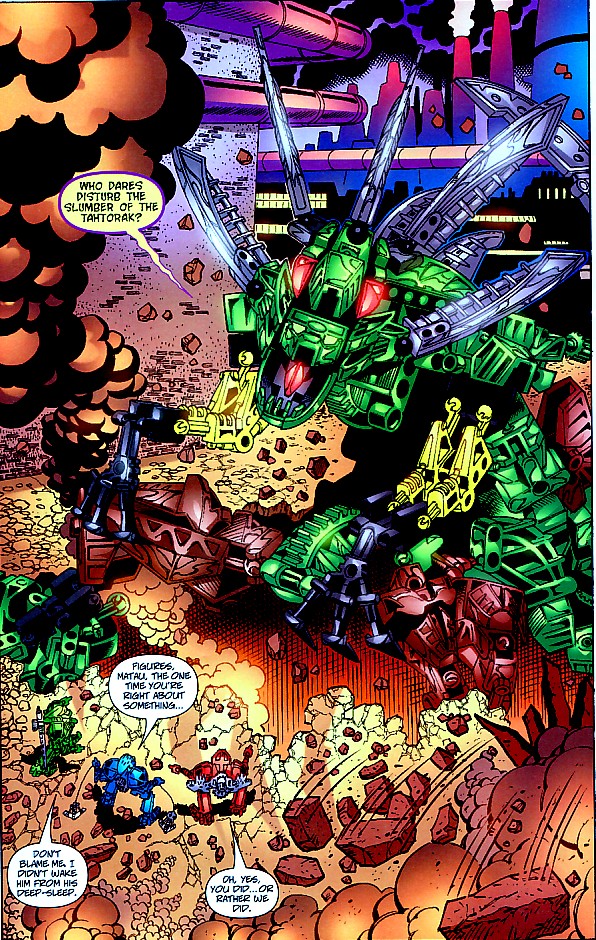 It’s right at this point that they do something in story that raises my hackles just a bit. See if you can figure out what that might be: 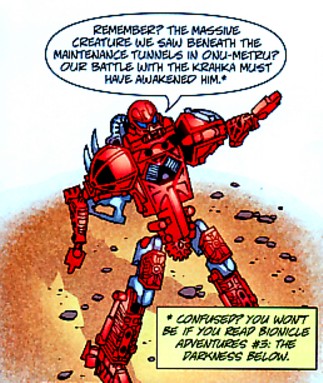 Now let me get this straight: If your kid is into Bionicle they are plunking down between $7 to $10 dollars for each figure. Every time there is a new wave of Bionicles, there will be approximately 4 to 5 product lines, each line containing six different figures (one for each color element) bringing that wave's total number of figures to somewhere in the neighborhood of 24 to 30 figures. Along with that there will be a DVD released with each wave and the comic book series. Not to mention trips to McDonalds so your kid can collect the six figures there while you choke down greasy burgers and fries that will never decay. And every three years a new wave will come out that will start this cycle all over again. Now you’re telling me that to get the full story of what happens to these little Polynesian shitz that I’ll have to plunk down money on the book series too?

Why tie all these in together? Beats the heck out of me. At least until I notice that the Bionicle comic I hold in my had has five pages of ads. Guess what the ads are for? Anyone say Bionicle products? Give yourself a gold star. Three pages tout new figure lines, one page sells the new DVD movie and the back page is ads for shirts, shoes and backpacks. Incredible. If I’d paid full price for this, it would have been like buying three dollars worth of ads. Part of me is incensed. The other part of me, the part that got a BA in Marketing is giving Lego Inc a slow-clap standing ovation. I figure if a kid gets hooked on Bionicle, it’s almost like he’s found a toy version of crack. Touche, Lego. My hat is off to you.

And I’m keeping my kid away from your products.

So how does the issue wind down? The Vahki show up, but are quickly buried as the beast brings a building down on top of them. The Toa are the forced to confront him. They do so by using a similar technique to drop the beast into the caverns below them. 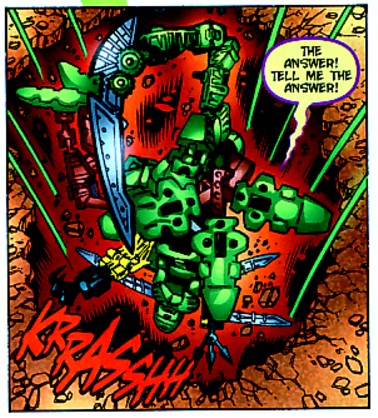 The answer is “Buy lots of Lego stock!” I wonder how many pieces will fly off him when he lands? No matter. I’m sure someone will put him back together for another appearance when his product sales start to slump. Our Toas leave after Vakama says something that’s supposed to sound profound. His cryptic exit line is something about how the creature’s efforts only brought destruction and destruction was all it found. Then the three shuffle off before any more Vahki show up.

The Bionicle experience is so well planned out that you may not notice how much they are selling the product to you at every opportunity. It’s a slick system. I’m just glad that toys are all they are trying to promote. If they headed a political party or religious group, there would be no hope for us all. They are that slick.

Posted by SonOfCthulhu at 2:29 AM