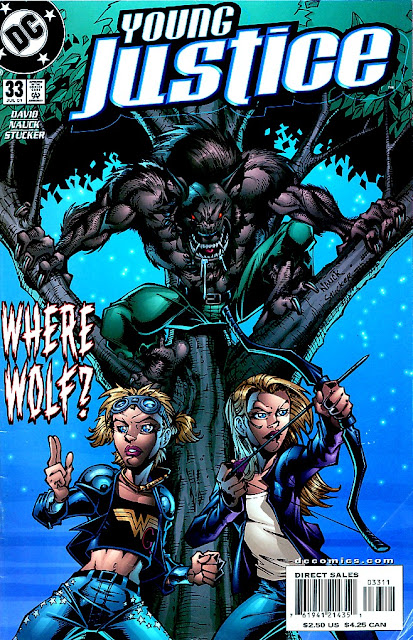 
I totally missed the Young Justice craze and I feel bit left out. I think that I would have really enjoyed a monthly like this had I chanced upon it after its debut in 1998. At a time when the Teen Titans had dropped the teen from their name, Young Justice was the series that carried on the tradition of junior league super heroes banding together to fight evil. Originally the team centered around Robin, Superboy and Impulse rescuing a new teen superheroine named Secret. The mini was successful and DC put out an ongoing. Shortly thereafter Wonder Girl and Arrowette joined the group, becoming the first of many such recruits. Peter David applied his deft storytelling and Todd Nauck added a his nimble pencils to the mix, a team up that would last through 53 of Young Justice’s 55 issues. Judging by this one issue, the book knows how to deliver action but is largely a character-based soap opera. This also means it skimps on werewolf action.

Unfortunately all that character chatter doesn’t leave much action scenes in this issue. Also the werewolf bit is just a tiny smidge misleading. Page one is a full panel of a giant furry beast, all fangs and claws and hair. Just what you want to see if you’re looking for a werewolf fix. Next panel introduces a figure in shadow carrying a crossbow. I can only assume this is Arrowette, the team’s female archer. 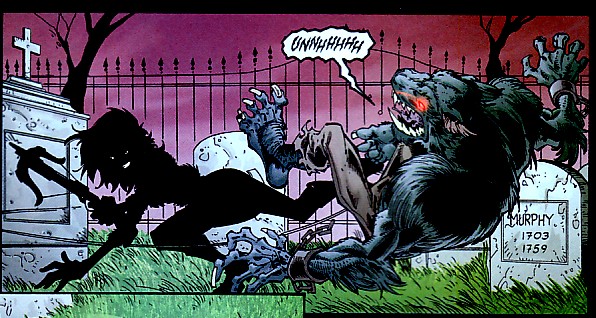 After a brief two page fight, Arrowette seems to lose her footing and suddenly the whole reason to include this book here comes crashing down around me. 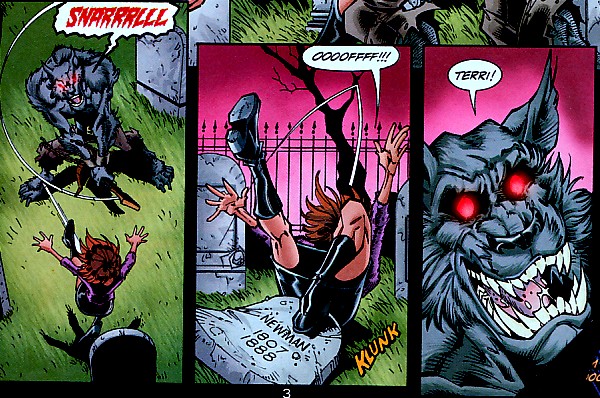 Yup! It’s a fake werewolf on a television program set. I’ve been setup by the cover. Well, no sense in kicking the book out now. It did have a werewolf in it, even if it turned out to be nothing more than a special effect. Let’s see if David has done anything clever by introducing this TV show subplot… 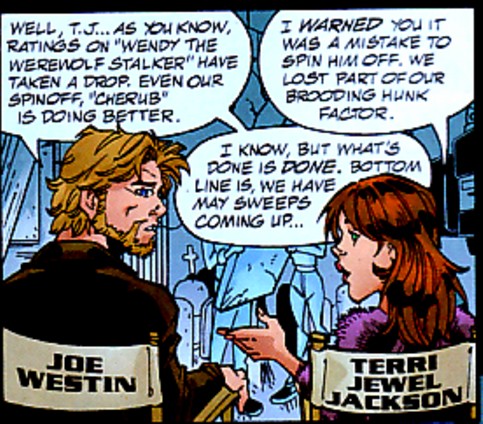 Catch the not-so-subtle hint as to who we’re parodying here? Thought you might. I wonder if Joss and Peter have any history, since Whedon recently entered the world of comic writing. Enough of that, the story has “Joe” suggesting a guest appearance on the show by world champion archer Cissie King-Jones, who unbeknownst to either of them is Arrowette.

Speaking of Arrowette, our story now shifts over to her. I’d never heard of this character before picking up Young Justice, but she has a pretty interesting backstory. Cissie is the daughter of Miss Arrowette, a character from the golden age comics who tagged along with Green Arrow and Speedy. Cissie’s mom forced her into the “family business” of superheroing after her father passed away. Cissie is a accomplished archer, gymnast, and hand-to-hand fighter because of the grueling pace her mom set for her. As Arrowette, Cissie joined Young Justice and had great success. However the pressures put on by her mother drove the Cissie right into therapy. And when the therapist she had trusted to help her with so many of her issues was brutally murdered, Cissie when on a rampage seeking revenge against his killers. The experience was so damaging to Cissie that she left Young Justice after catching the killers, fearful of what she might do with her powers.

So now we pickup Cissie’s story as the store she’s shopping in with the Red Tornado’s young daughter Traya is suddenly robbed by men wielding uzis. Unfortunately for them, Cissie’s training takes over and she incapacitates one of them. Then she’s forced to make a decision about whether she can face down her fears about losing control and save both her life and Traya’s. 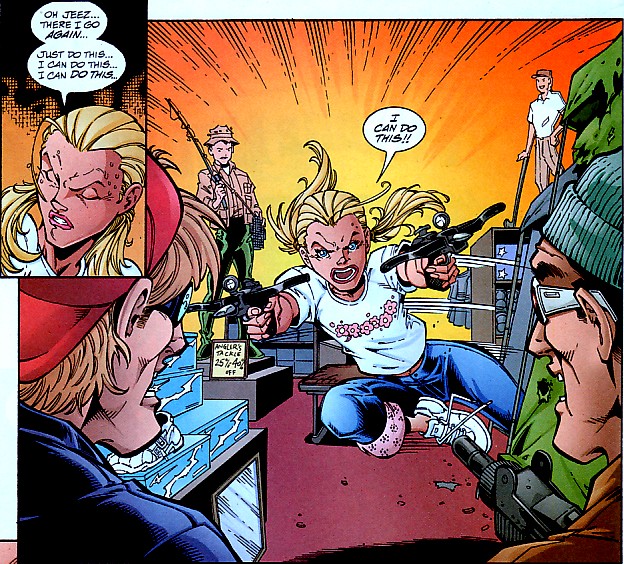 While that looks good, Cissie completely freezes. Lucky for her there’s back up around the corner. 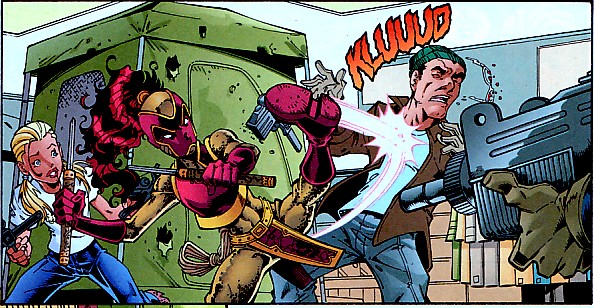 That character is Empress, another person I’m completely unfamiliar with. Never fear, wiki to the rescue. Empress real name is Anita Fite (cute) and she’s the daughter of one of Young Justice’s former enemies. She idolizes Cissie, who can’t stand her. Her abilities appear to be nothing more that martial arts, but wiki hints that she has magical abilities as well.

Cissie should be happy for the assist and…you know, someone saving her life, but instead acts all ticked at Empress and Wonder Girl for showing up. She storms out of the store. Sheesh! Next time they should let her get slaughtered.

Trying to patch things up the three girls head back to Cassie’s dorm room. Fully expecting the same cold-shoulder treatment, they are shocked when Cassie bounds across the room and hugs them. My first thought is that teenage menstrual cycles can be a real rollercoaster, but it turns out Cassie’s mood change is due to a different reason. 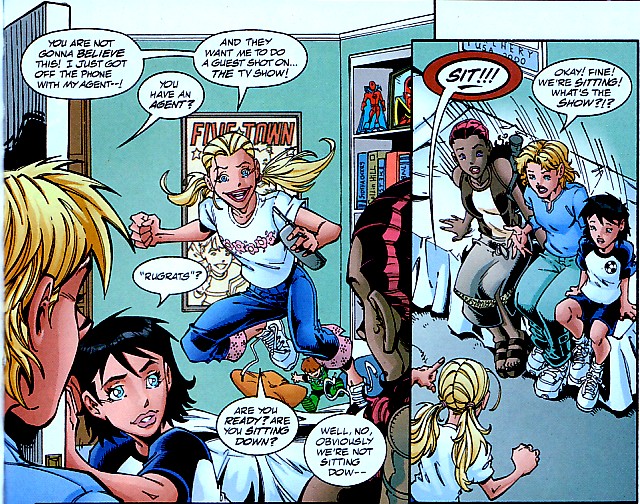 The news is broke that it’s Wendy, the Werewolf Slayer and all the girls get excited. Sadly Cassie can only bring two friends with her and she doesn’t even hesitate to exclude Anita. Anita makes a very frosty exit.

Meanwhile the actress that plays Wendy is being stalked by someone in a werewolf costume while she is cutting down her co-stars to their faces. Someone really needs to look up what Peter David has against Sarah Michelle Geller.

On the plane flight out, Traya lets it drop that Anita is on the plane as well. Cissie goes to the lounge to have a little chat with her. We get a couple of pages of them being catty with each other before Anita makes a very heart-filled speech about how much she admires Cassie and wants to be like her and ends with “If it will help things be better, Just tell me to quit the team, and I’ll…”. Which leads to this:

While this looks like both girls are about as far from friends as they could get, at this point they start laughing at how silly they both sound and become friends. No, really. I’m not making this part up. The hard part to all of this is that it’s written so believably by David that neither chick jumps out of character nor does it sound forced. Touché, Mr. David.

Back at Young Justice’s secret headquarters, Superboy finds out where Wonder Girl and Arrowette are headed to and becomes majorly depressed. Seems hes a “Wendy” fan as well. Back on set Wendy prepares for her big scene with the girls watching only to find that the furry costume extra has been replaced. 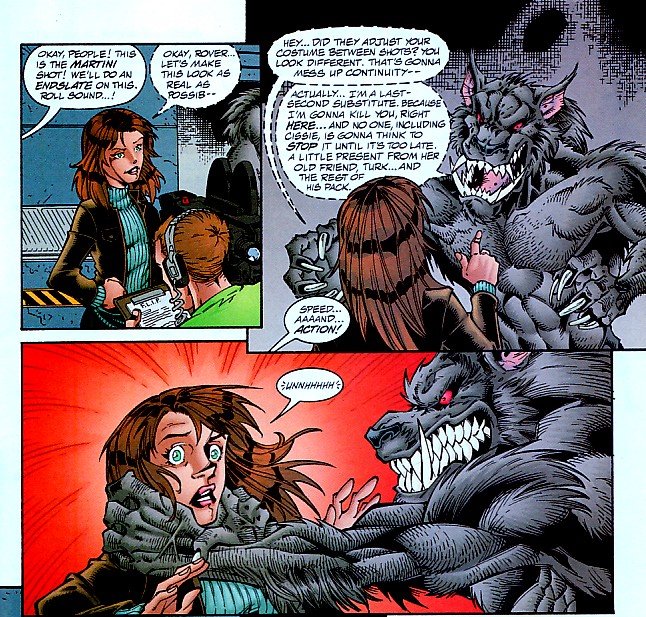 Seems she’s in for a bit of trouble unless she gets really good at method acting her fictional character. So the book has some werewolves in it, but is really just a hint of fangs to come.

That’s it for the werewolves for now. Hope this guide proved educational.
Posted by SonOfCthulhu at 9:02 AM