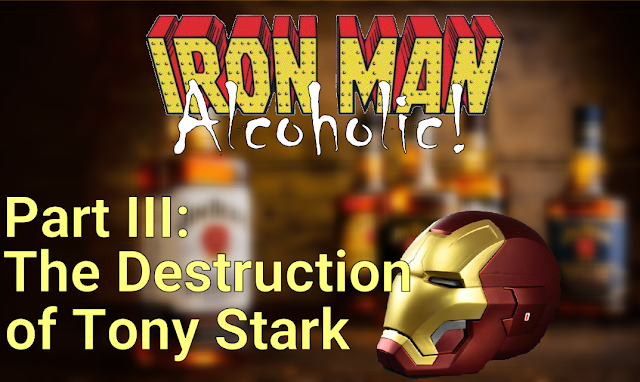 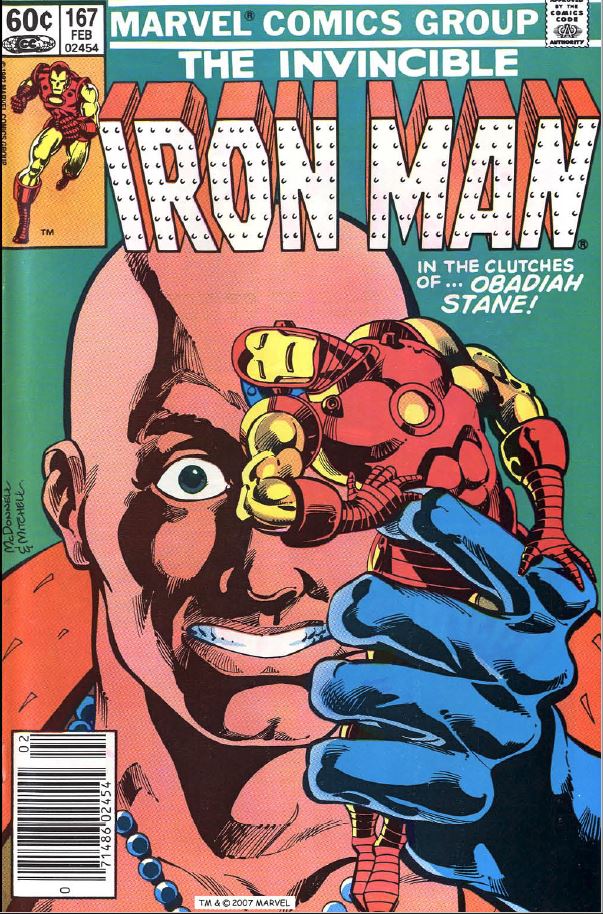 We left off with Tony Stark barely hanging on to his sobriety.

Obadiah Stane has managed to shake our hero’s control over himself. Through a carefully arranged gauntlet that denied Tony rest for the past week, Stane orchestrated a series of trials that battered Tony’s body, destroyed his current suit of high-tech armor, and nearly killed him numerous times. Now Stark faces the loss of his company to Stane through dirty business dealings. And to make matter’s worse, Stark’s truest friend, James Rhodes, is missing and assumed dead.

In an effort to extinguish whatever spark of resistance might still remain in Tony, Stane has left a bottle of alcohol in his private residence. If Stark drinks it, he is surely lost, for he is so close to allowing the depression to swallow him that even a single sip will push him over the edge. 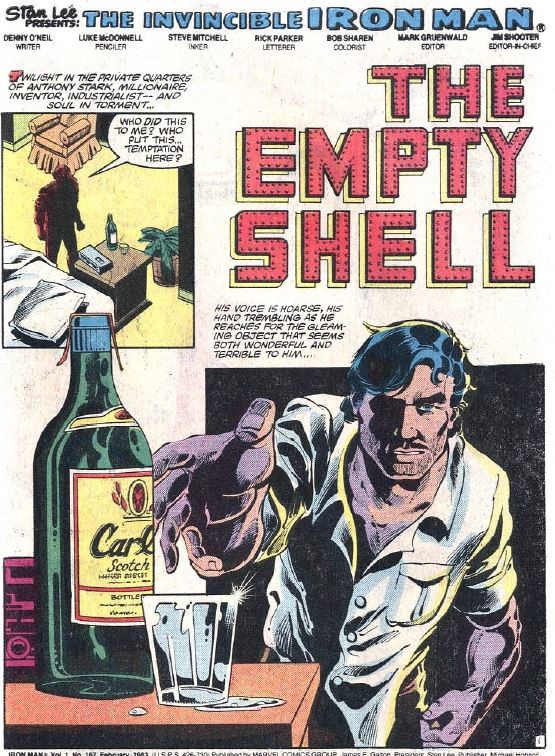 Stark proved true the Alcoholics Anonymous’s “The Big Book” adage of “once you are an alcoholic, you are always an alcoholic.” Even a casual drink would lead to excessive drinking in an addictive manner.

Tony reaches for the bottle… 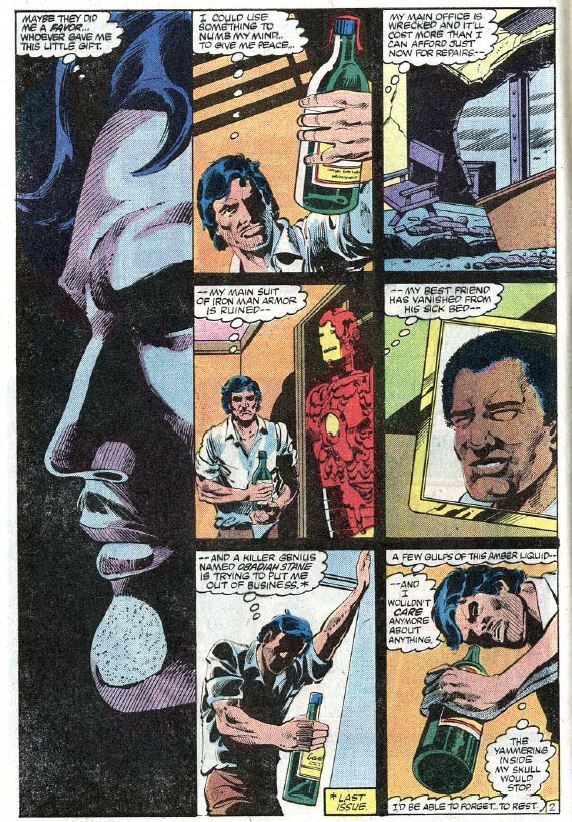 ….and feels the temptation stronger than it has ever been before… 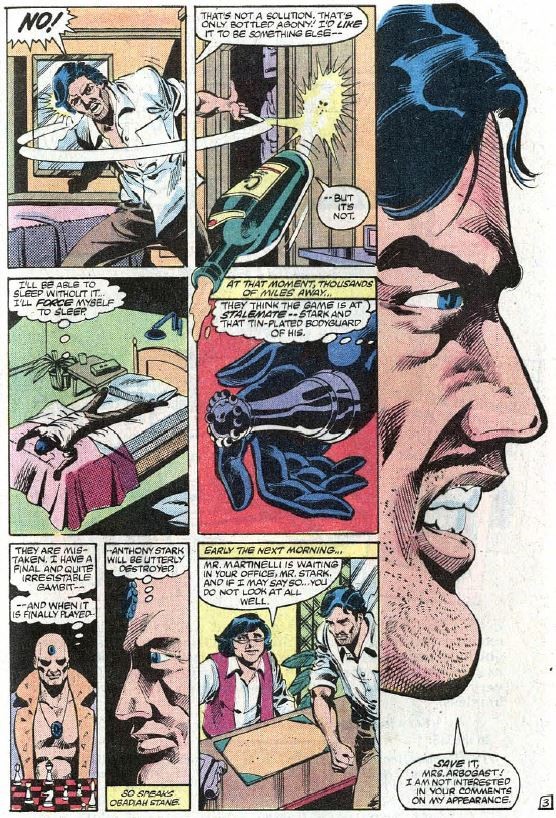 …yet still he finds the resolve to resist it.

However, this last bit of resistance is coming from an exhausted Stark, who is in many ways as empty as the Iron Man armor when he isn’t in it. He’s been hollowed out by Stane’s unrelenting attacks and mental torment. Even a night’s sleep doesn’t fully restore him, as Mrs. Arbogast points out.

A second sign of how Tony isn’t himself comes as Vic Martinelli, the head of Stark’s security, rightly suggests that Tony’s physical and mental condition have deteriorated to such a level that he should seek out some help. 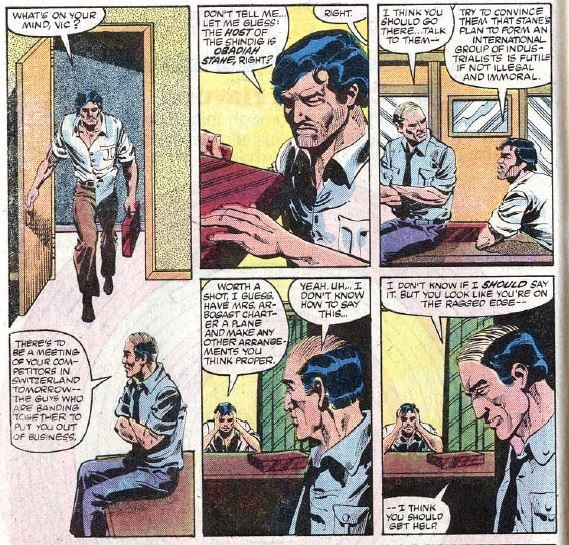 And unlike issue 128, Tony’s ego sidesteps his logic this time. He says no. Stark denies that he needs help even as things unravel further around him. Destroying this social support system is what dooms Tony. Had he reached out to Bethany or Jarvis, or had he been able to lean on Rhodey for support, Stane’s temptation might have failed.

Instead he travels to the conference alone and ends up trying to rely on his armor and his persona of being Iron Man for strength. He is putting his faith in all the wrong things, even though that picture of Indries gives me hope that he might reach out to her at least. 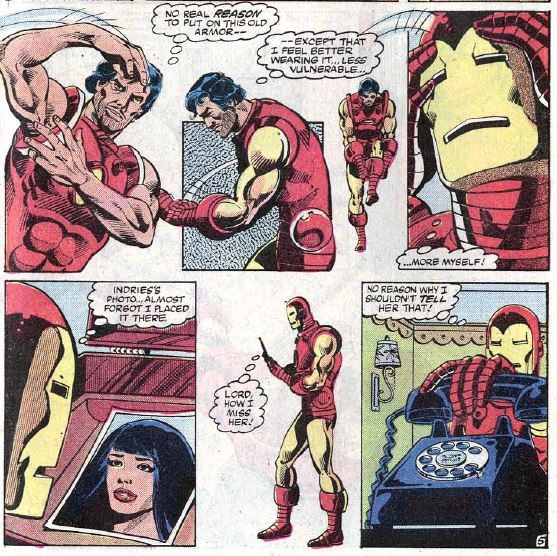 And he does, but he hesitates in asking her for help. Instead of opening up to Indries, Tony locks himself in his armor and trusts that he’ll be able to handle the situation. He sheepishly admits to loving her, which seems premature for someone he has known for less that two weeks, comic book time. If there is one weak story element in the arc it is that Tony becomes emotionally dependent on Idries in such a short time. Perhaps we should look upon this as another sign of Stane’s weakening of Tony’s resolve. That he is at a low point and anyone around him grows in importance relative to his situation. 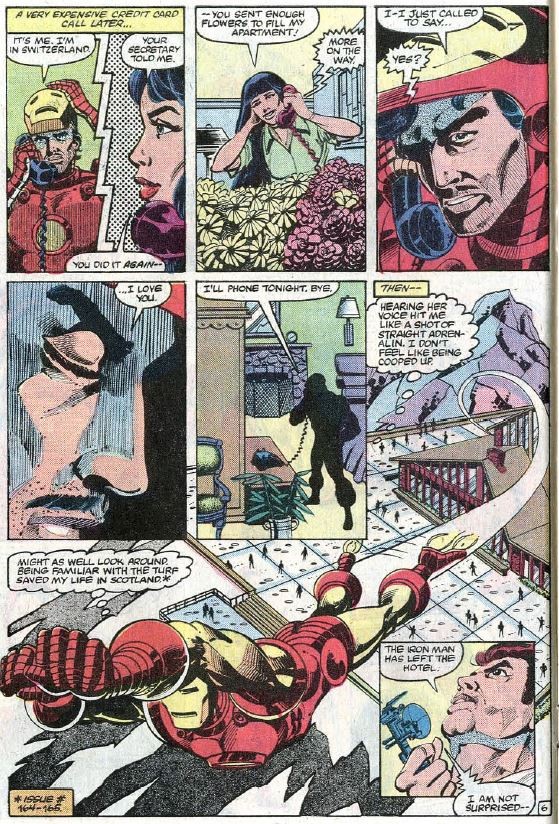 It is Stane that is pulling the strings at this point in other ways, so perhaps. The villain brings out a second pair of his Knight and Bishop henchmen, causing mayhem for Stark and a group riding a sky gondola. 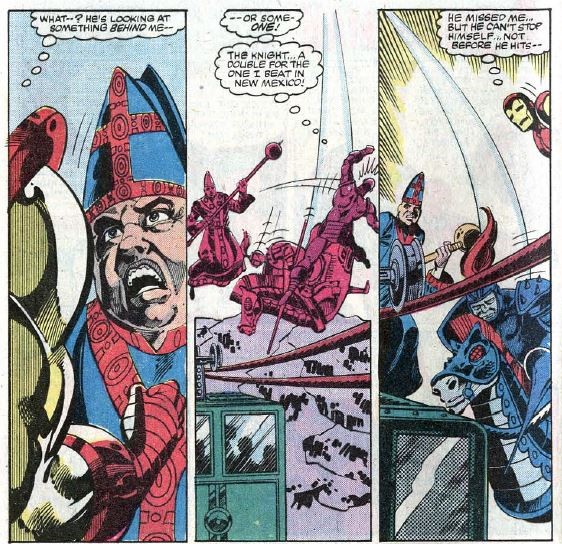 Iron Man saves the passengers while defeating the pair of attackers, who seem versed in how their predecessors were defeated. Meanwhile Stane is playing around with the minds of the big business partners who will soon be locking Stark Industries out of all dealings in European technical markets. Scenes such as this only show the depths of Stane’s depravity and insanity. 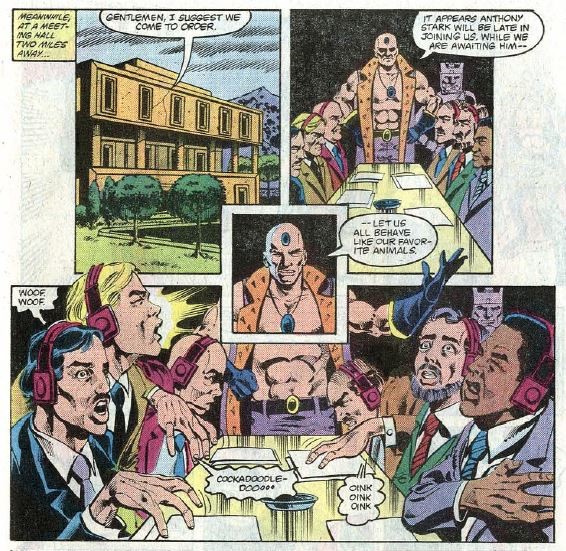 After finishing off the last henchman, Stark arrives to the meeting and watches as Stane proves his power of the consortium. No amount of reasoning by Stark will work on those who are being mind controlled. 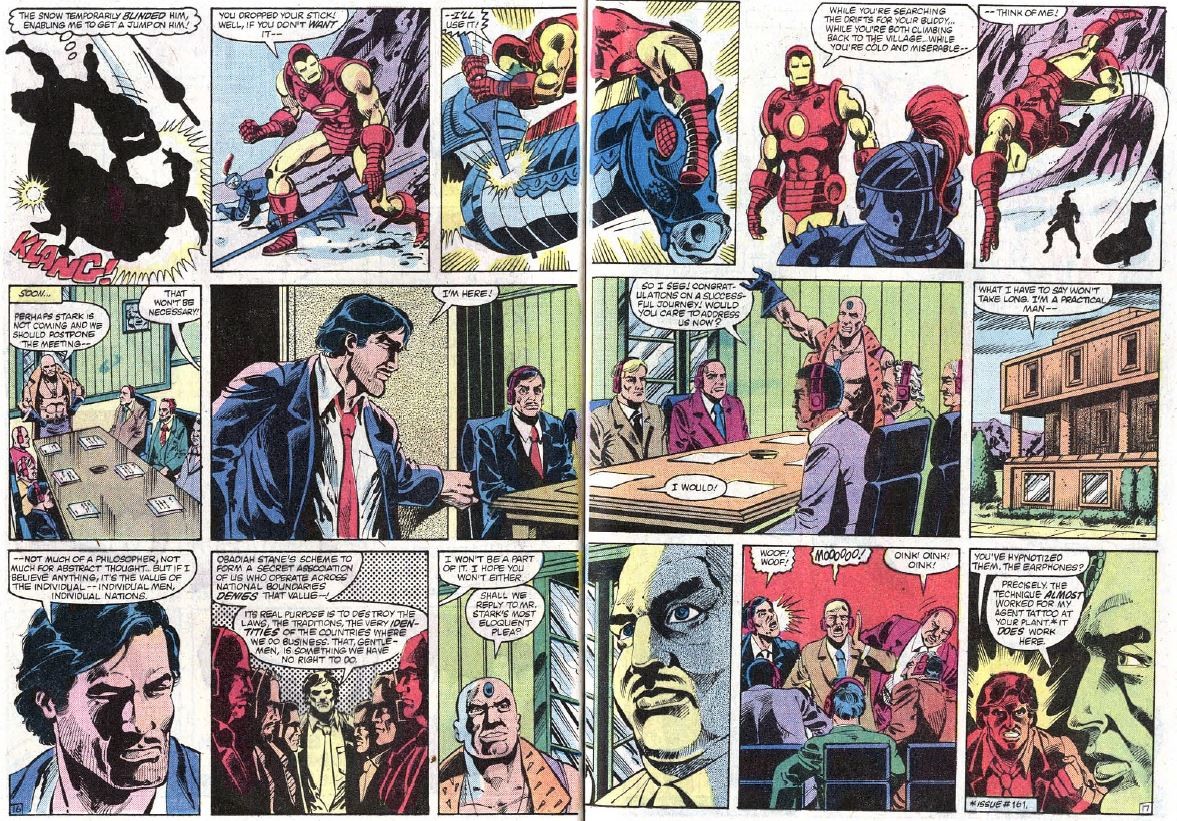 But even then, Stane doesn’t try to kill Tony. What Stane wants is to win against him… 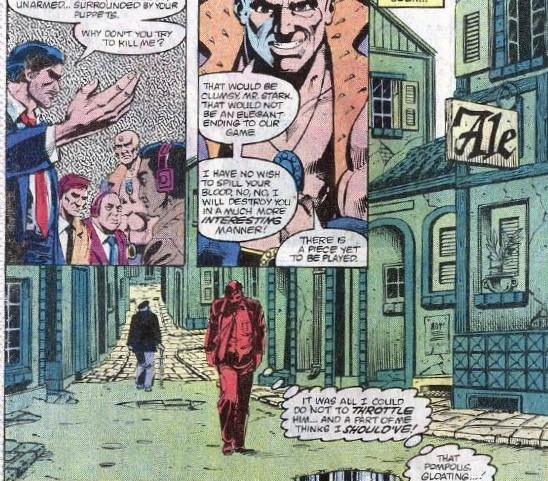 …and that means driving him into utter and complete ruin. Sadly as Stark wanders back to his hotel to gather his things, Stane’s influence is breaking though Tony’s willpower. The temptation of curling up in a bottle gains strength. 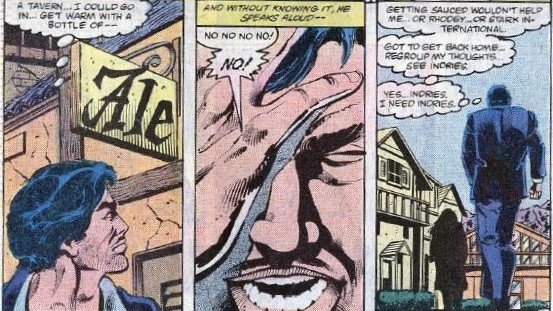 In happier news, Rhodey has regained consciousness and freedom, although he’s still in Scotland and being pursued by Stane’s gun-toting henchmen. 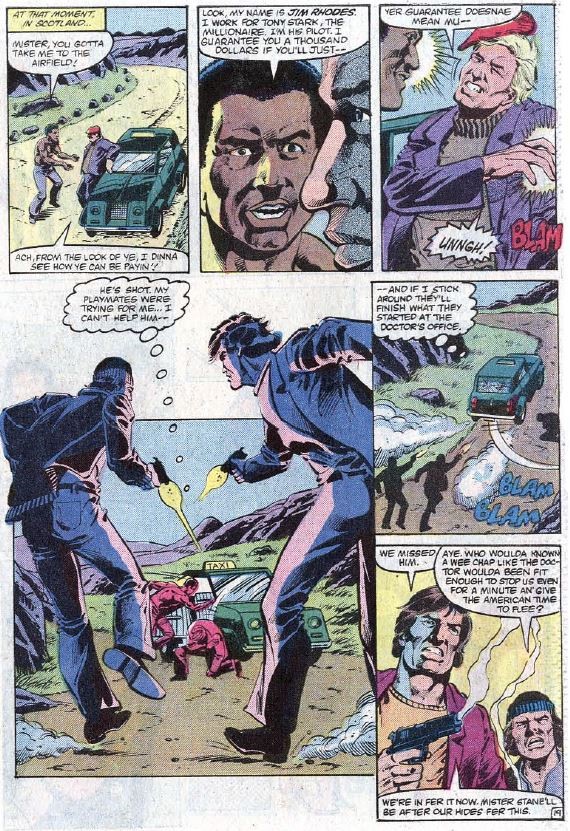 Stark jets back to his headquarters seeking Indries. He finds her in his private office suite, although Mrs. Arbogast seems quite unwelcoming of the young gold digger. I find this the most appropriate thing in the book, how Mrs. A. treats the two-week old relationship between the pair in a very realistic manner, not seeing why Stark is investing so much in the woman. 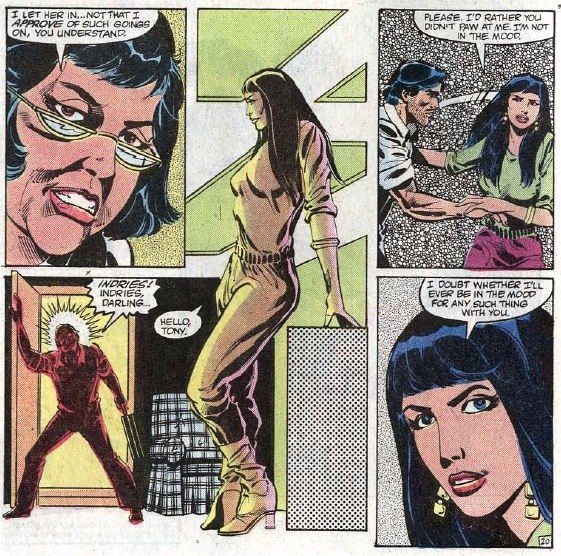 If only Tony hadn’t been setup by Stane to fall for her in his moment of weakness. But that is exactly what Stane has done, and Indries plays her part up to the hilt. 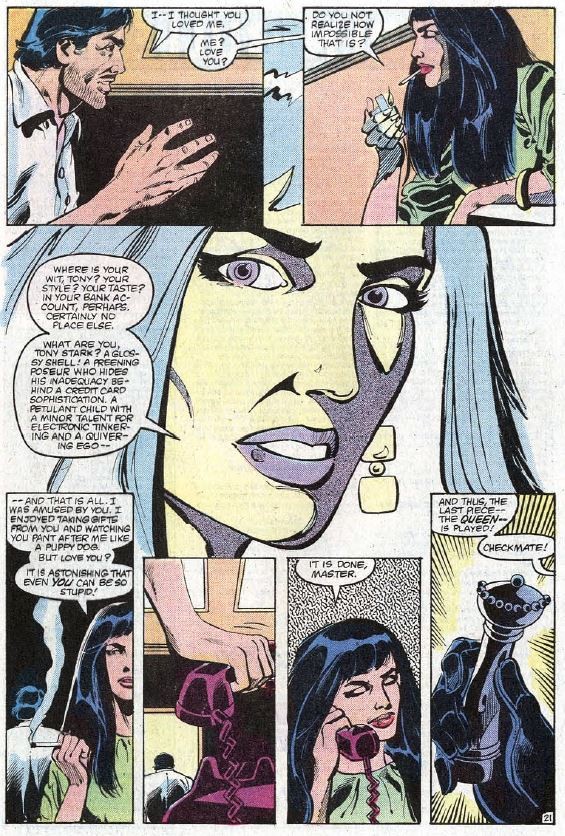 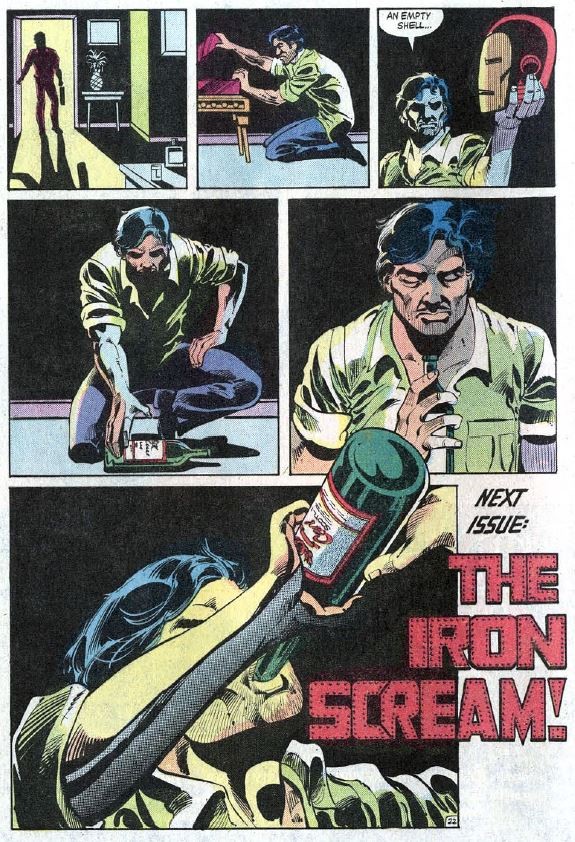 …and back into the bottom of a bottle. This is the turning point for Tony Stark. 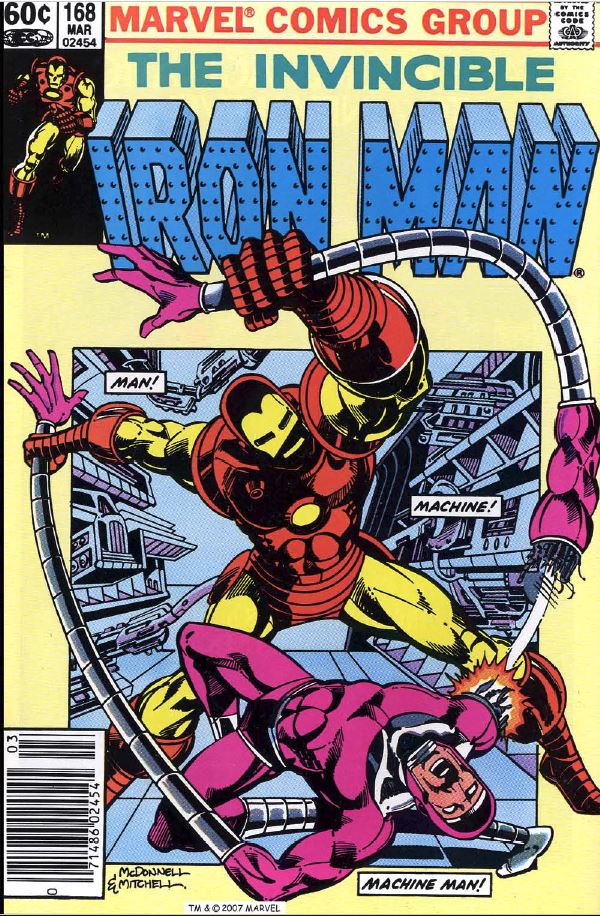 With the next issue we throw in Machine Man, a Jack Kirby invention, who shows up at Stark Industries thinking Iron Man is a robot kinsman. He is looking for knowledge and companionship, but all he finds is combat and destruction. This ends up fortuitous for Stane however, as today marks the culmination of four years and several million dollars research that has to go out tomorrow. Research that will depend on a drunken Tony Stark. 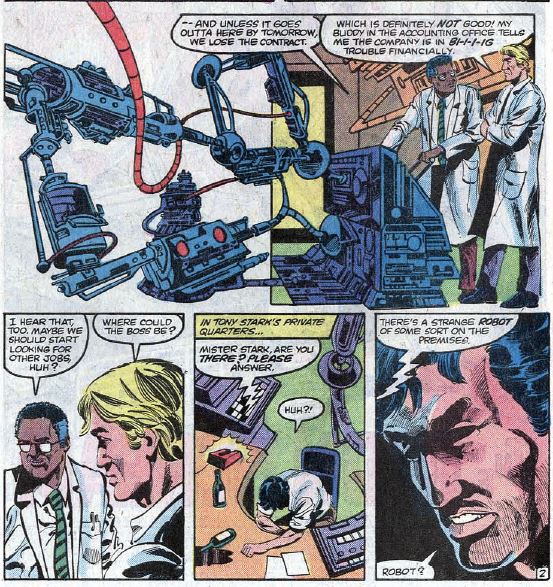 First he doesn’t arrive at the lab on time, and then he mistakes Machine Man for one of Stane’s chess-based hench-people. 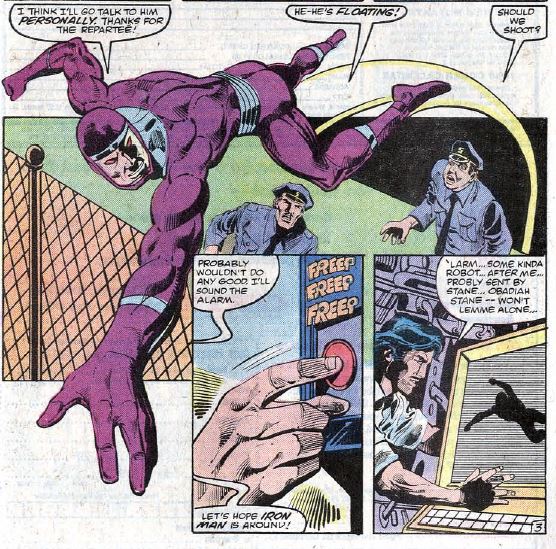 Which means he suits up before going out to meet the living computer, however he’s so drunk that he has a hard time doing even that. 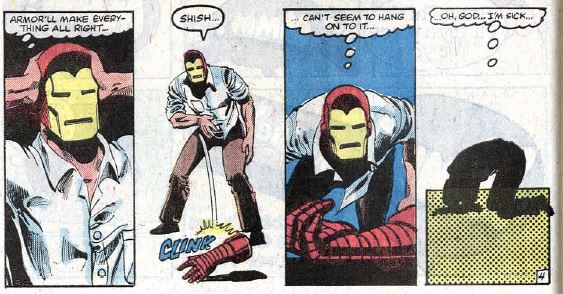 The pair confront each other, although for Machine Man it is less of a confrontation than it is a friendly greeting. Thinking this is another Stane trick to throw him off guard, Iron Man lurches to the attack, missing by a mile but horrifying Mrs. A.

Machine Man thinks Tony is some kind of robot that is broken and a danger, which means the battle is joined. 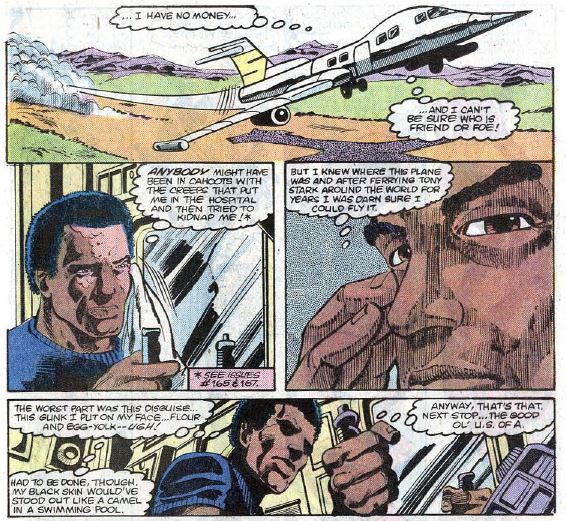 Meanwhile a continent away, Rhodey knocks out the guards who are minding the Stark jet left in Scotland and makes off with it. He starts his fateful journey back to Stark Industries, while we turn back to Tony’s battle with Machine Man. 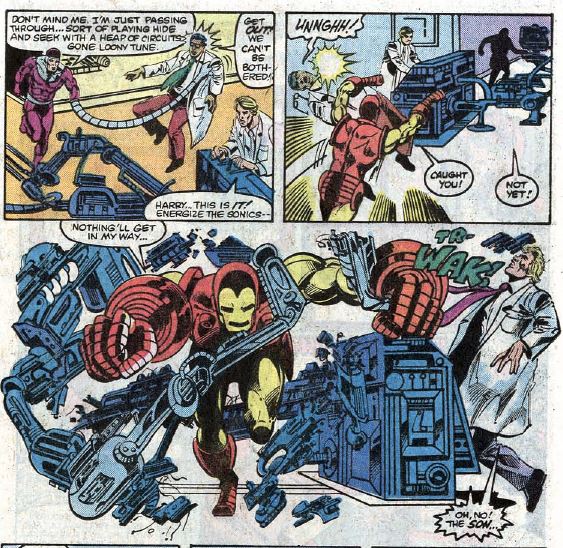 A battle that takes them right through the lab where the pair of scientists have been waiting for Tony to show. And their path destroys four years and $80 million in research as if it were tissue paper. This will write the end to Stark Industries: a drunken brawl that could have been avoided had Tony been sober.

In the end, Machine Man shuts down Tony’s armor and then realizes he’s made a mistake. He flies off leaving Stark as Iron Man to rush back to his lab, the details of the conflict already hazy in his alcohol addled brain. 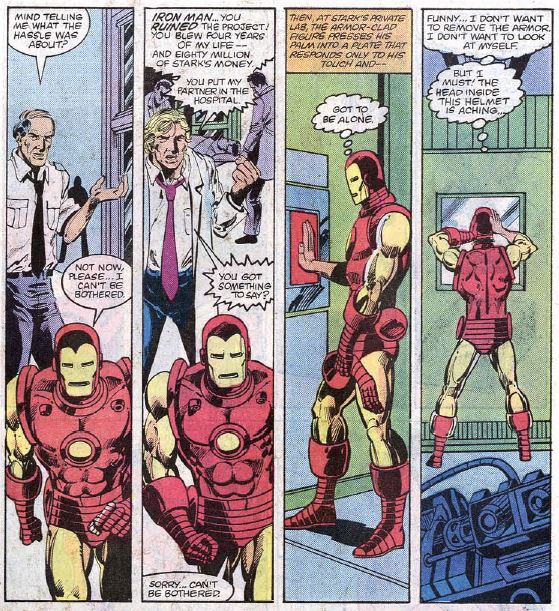 He abdicates his responsibilities and rushes out of Stark Industries as quick as he can. Lives and careers are being ruined, but Stark is only looking for that next drink. Martinelli even has some cross words about Tony to the young technician (we’ll be seeing more of him later). 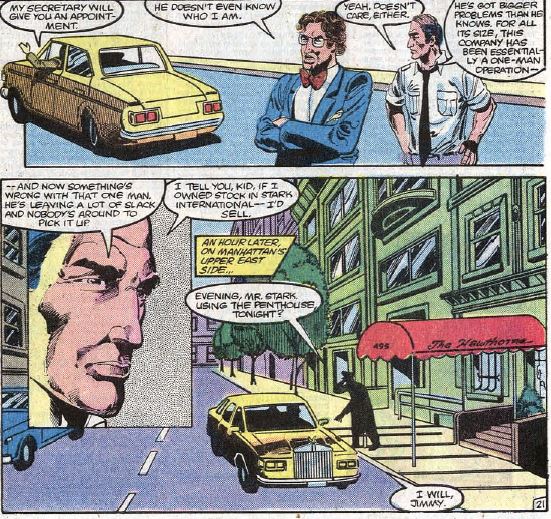 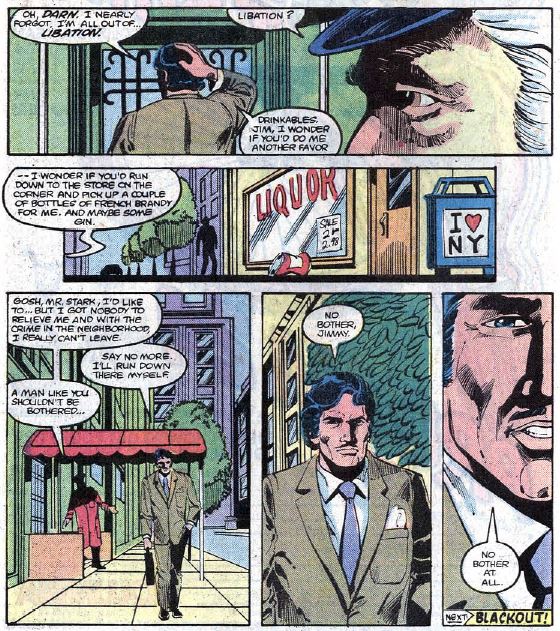 His drive at this point is the next drink and nothing else matters to him.

Be here Friday as we watch Tony Stark’s life in freefall and see him lose it all in Hitting Rock Bottom.

As for now, remember to check out these great blogs from the Super-Blog Team-Up crew all of which deal with redemption arcs by various superfolks! Great stuff

Coffee and Comics Green Lantern #100
Two Staple Gold: Just a Pilgrim
Comic Reviews By Walt: SBTU Presents - Redemption/Coming Home: Shredder
Comics Comics Blog : Elfquest :Cutters Redemption
The Retroist Via Vic Sage:The Redemption Of Magneto
The Source Material Comics Podcast: Penance - The Redemption of Speedball
The Superhero Satellite: The Walking Dead: "Redeeming Negan"
Longbox Review: Nightwing's Redemption
Between The Pages Blog: The secret Origin of Spider-Man
The Unspoken Decade: What If...? V2 #46 and #47
Black, White and Bronze: The Redemption of Red Sonja, Savage Sword of Conan #1
The Daily Rios: Thanos: Samaritan (Issues 7-12 2004)
Chris Is On Infinite Earths: The Pied-Piper Reforms! Flash vol.2) #31
In My Not So Humble Opinion - The Other Side of the Wind: The Redemption of Orson Welles
Posted by SonOfCthulhu at 2:38 AM