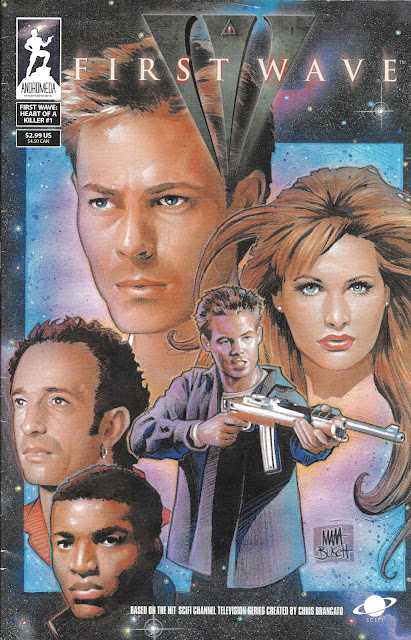 After "V" at the start of the week, we now have how twenty years later interpreted the same story concept. Chris Brancato, of Species II, Boomtown, and Hoodlum fame, developed this Canadian science fiction drama television series called First Wave back in 1998. The series aired on the Space Channel in Canada and was picked up by the Sci-Fi Channel (before the “y’s” were added to its name) early in its run for stateside showings. In an unusual move, Sci-Fi expanded its pick-up to a 66-episode order, meaning we got three seasons of First Wave before it was really out of the gate.

The ratings fell off quickly though and no fourth season was ordered. 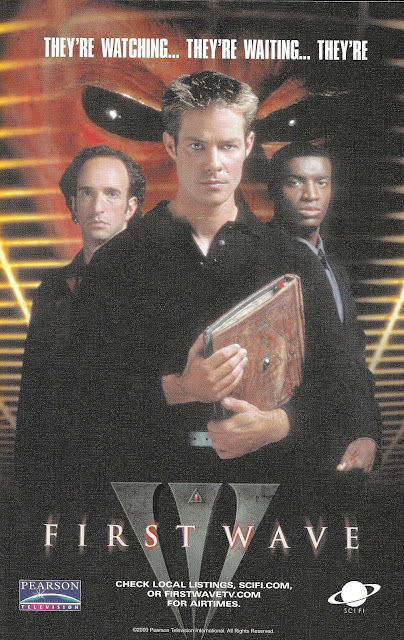 The series premise was simple: Aliens, hidden among us are preparing to wipe us out and only one man, Lawrence “Cade” Foster, can stop them! Cade was designated by the aliens as experimental subject 117 after they did a kind of biblical Job action to him by ruining his credit, getting him fired from his security consultant job, and framing him for the murder of his wife. This usually results in their subjects giving up, but it only made Cade mad. He used his detective skills to uncover the blueprints to the alien’s plans, hidden in (of all places) a set of previously undiscovered quatrains of Nostradamus. Now he fights the first wave of the alien invasion steps, knowing that in wave two nineteen million people will be killed.

Sounds a little hammy and silly, but it’s a workable enough X-Files riff. Sebastian Spence plays Cade and he’s likeable enough. I only know this because it appears the entirety of the show was uploaded to YouTube and I’ve sat through two-thirds of the first episode. I’m not rushing to watch more, mind you, but I could see how it would fill a program spot between two better shows without a viewer fumbling for the remote. Here’s that YouTube search if you’re inclined to see what you may have missed.

The idea of the aliens, called Gua, looking a bit like us is explained away in that they are disembodied spirits in metal orbs that have been implanted in specially bioengineered human husks. They are faster, stronger, heal quicker from injury, and have some odd supernatural powers. They got oppressed on their own homeworld thousands of years ago, beat back the invasion and decided to do unto the universe before it did unto them again. Earth is just the unlucky recipient of that pay-it-forward beat-down. The explanation of how Nostradamus’s prophecies fit into this came around season three when we learn of ANOTHER alien race with the gift of precognition who are going planet-to-planet seeding each with instructions on how to defeat the Gua. 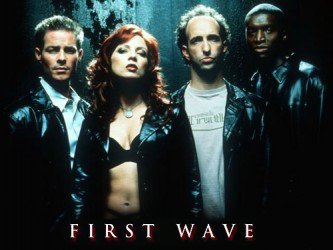 I haven’t skimmed through these, but Cade didn’t always act alone. He got a hacker buddy named Eddie that was sort of Microchip to Cade’s Punisher. They also meet up with a “good” Gua named Joshua who does not believe in his people’s aggressive ways. The male audience might have been waning a bit around the “season three” stage because the show runners threw in ex-porn star and “actress” Traci Lords as Jordan Radcliffe. Radcliffe leads an anti-Gua resistance cell called Raven Nation or some such…I really can’t tell.

First Wave did get a novel by Chris Brancato and Karen Holmes, aimed at the…*ahem*…YA market published in June 2000. The show also got six issues of a comic book series published by Andromeda Entertainment encompassing four storylines, each with a byline. This is issue one of the first story, a two-parter called Heart of A Killer. All the comics were written by James Anthony Kuhoric and all but one featured the art of Dan Parsons.

The book…is pretty much the same as the show. It’s not great, being hamstrung by the slightly silly premise, but it is a workable quick read. In no way would it be worth that $2.99 cover price way back eighteen years ago. And unlike the X-Files books, I’m not certain there was a big enough following of these to generate much in the way of sales. I expect they were produced as a loss leader to generate interest in the show, most of the others serving as background on Cade or Jordan Radcliffe or major turning points in the plot. This one looks closest to the feel of an episode of the show, which was basically having Cade expose an alien plot while not getting caught by the authorities himself for that “killed his wife” thing that was still unresolved.

We begin in a Riker’s Island men’s prison shower with three gents about to tell this other prisoner “shank you very much”. 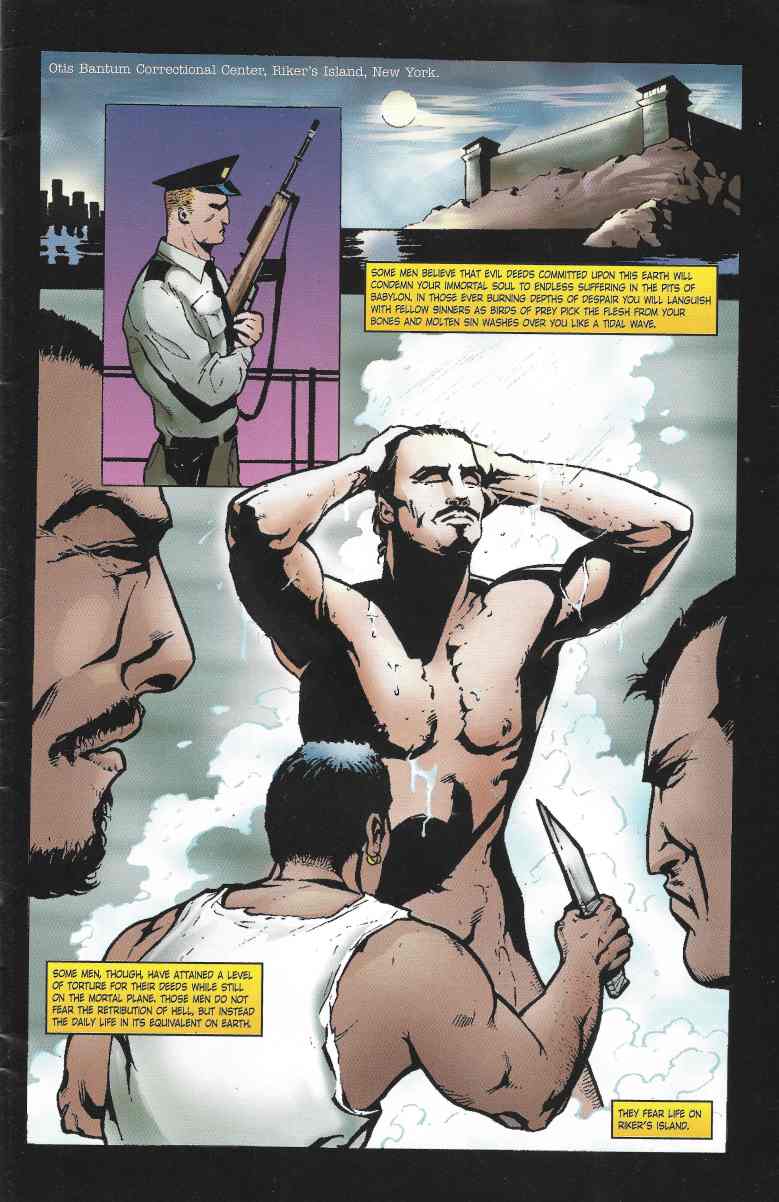 The poor naked guy is pinned… 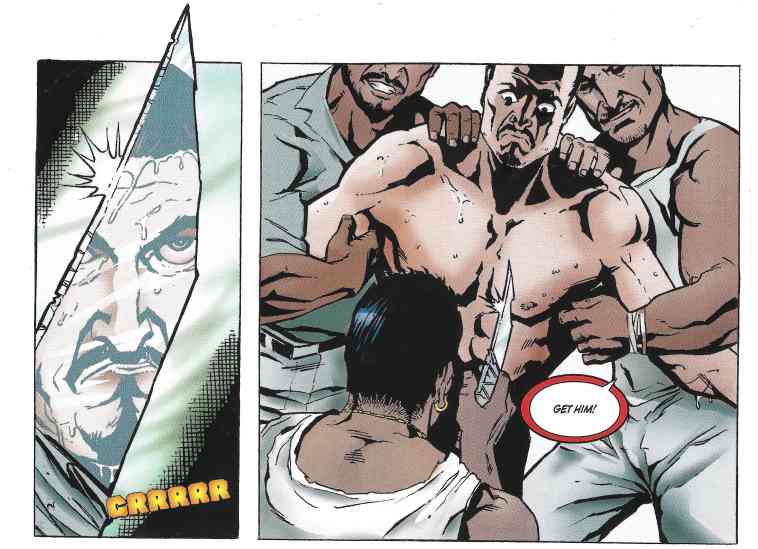 …and skewered straight on. At this point, I have no idea what their beef with him was, but it is pretty clear that they’ve won. 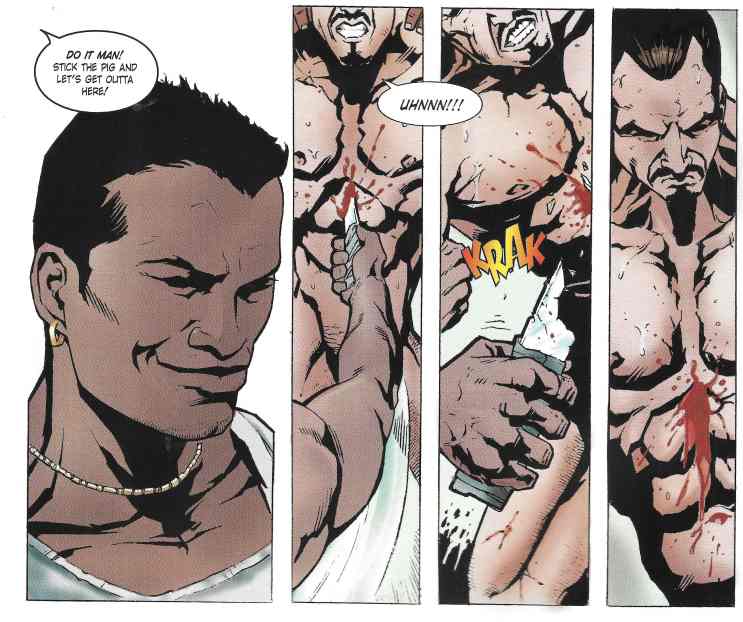 Which is where I’d be wrong. 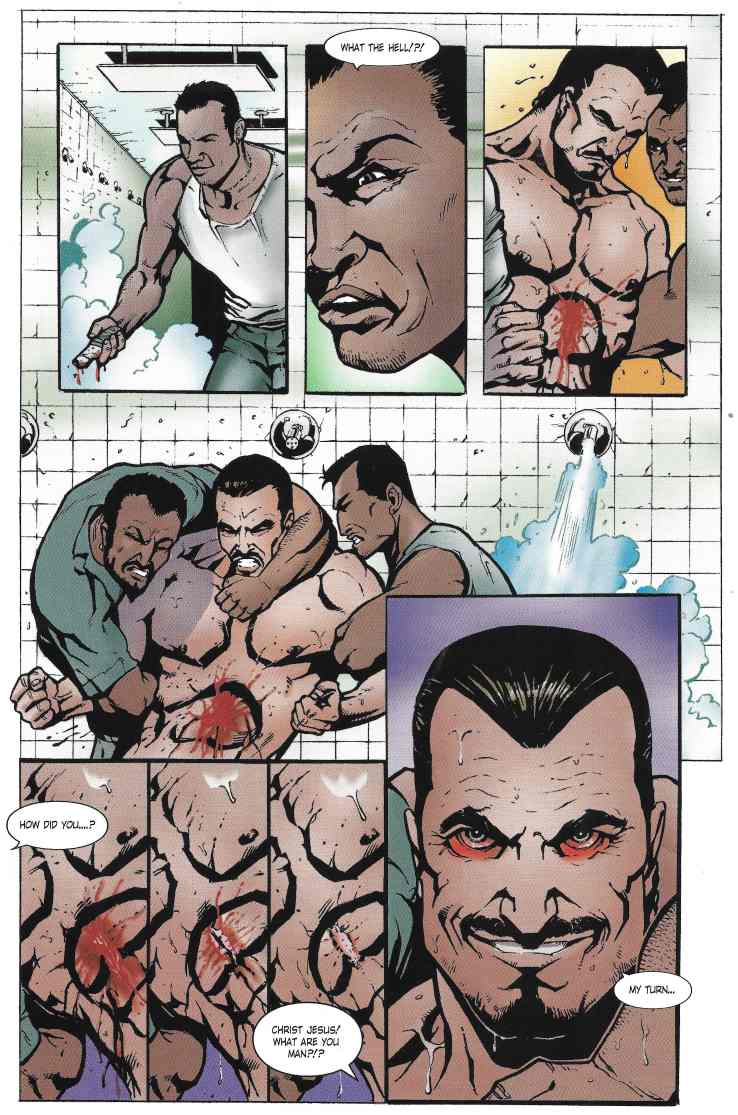 Because this inmate is clearly one of our Gua aliens. And obviously his biogenetic shell allows him to recover from that wound in an instant. Appears he’s in the mood for some payback. 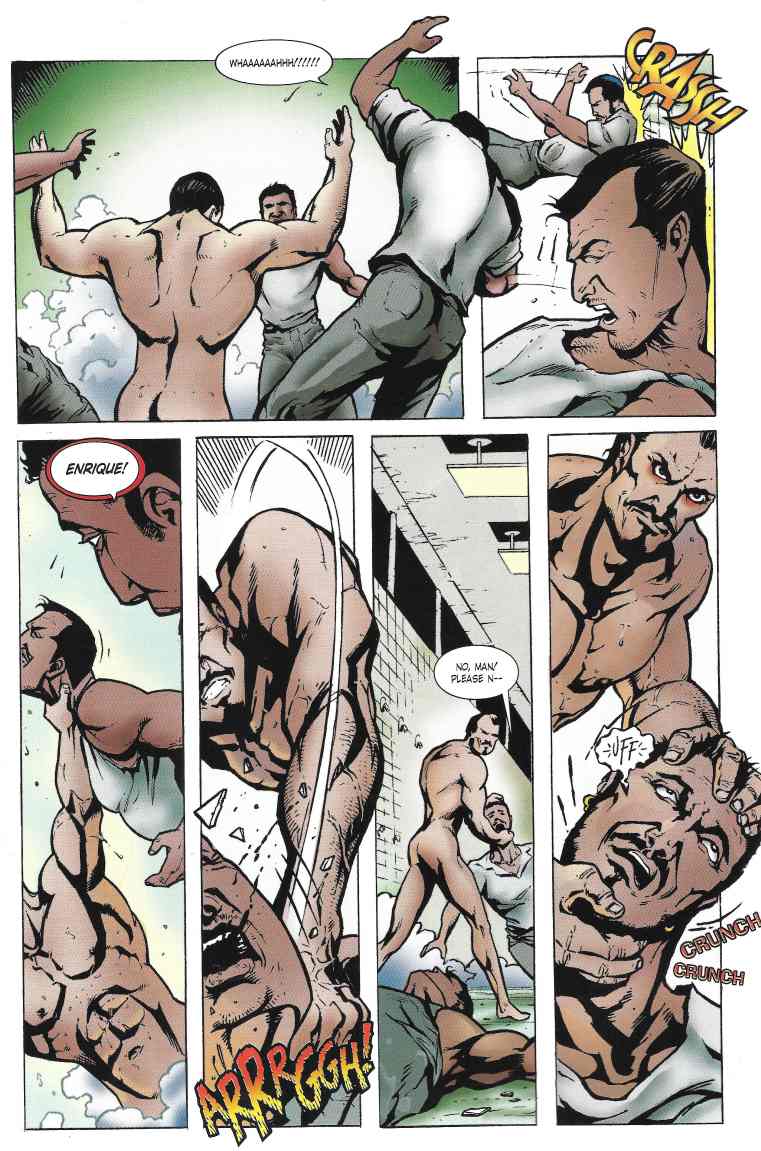 …before you know it, there’s only our stabber left alive. Our Gua gives him a chance to tell him who ordered the hit. Unfortunately, he may have already killed the guy that did know and this fella is just part of the muscle. Which is too bad for him. 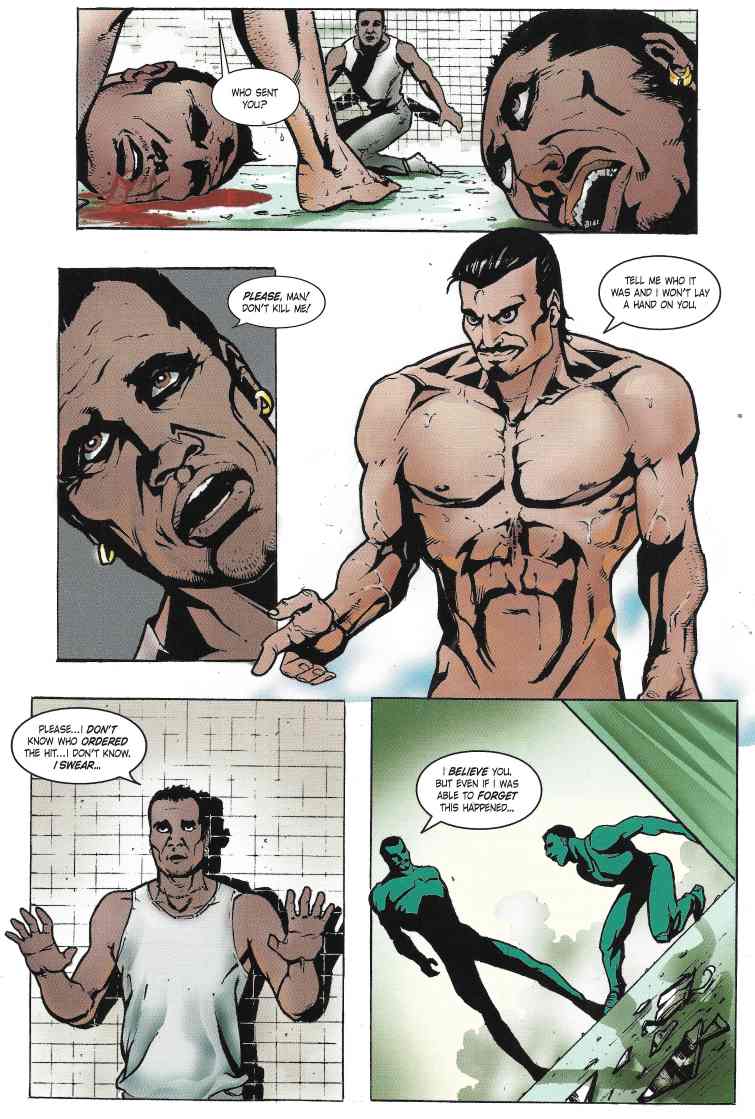 Because the Gua have ways of killing you without even laying a finger on you, apparently. 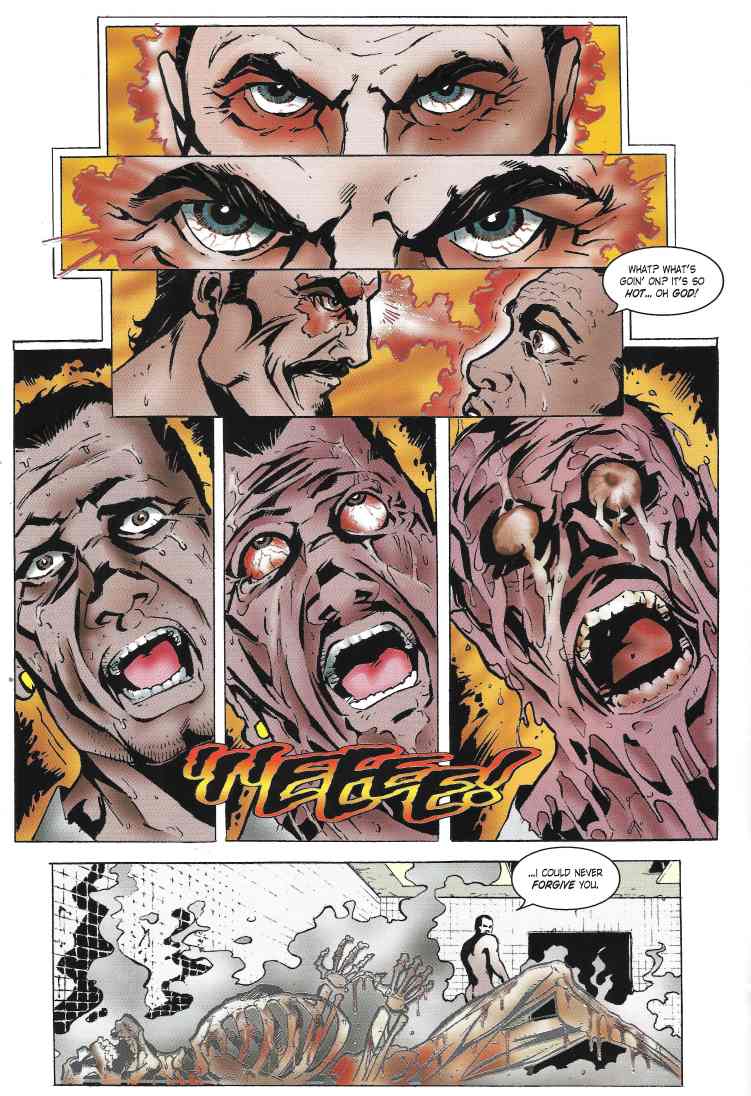 So he uses his brain to flash-fry the last attacker and then leaves his smoking skeleton for the prison guards to clean up. I will say all that melting flesh has to play hell with the shower drains.

Okay, so when I first read this I had no idea about the Gua, or Cade’s mission or the series backstory and I’ll admit…this opening worked well for me. I thought First Wave was an X-Files clone with a “monster-of-the-week” premise and Cade wandering around trying to find proof. While some of that IS what First Wave is about, the “always aliens” plotline is very limiting and I found myself less enthusiastic about the show and where this story could go.

I mean what good can an alien in prison do to help an invasion of our planet? This isn’t like being close to high places in government or industry. Not sure I see the reason for this…

…except as a plotline that works to emphasize Cole’s vulnerability by sending him willingly into prison when he’s a wanted felon. But before we get to that, the book tries to sum up the series premise in two pages. 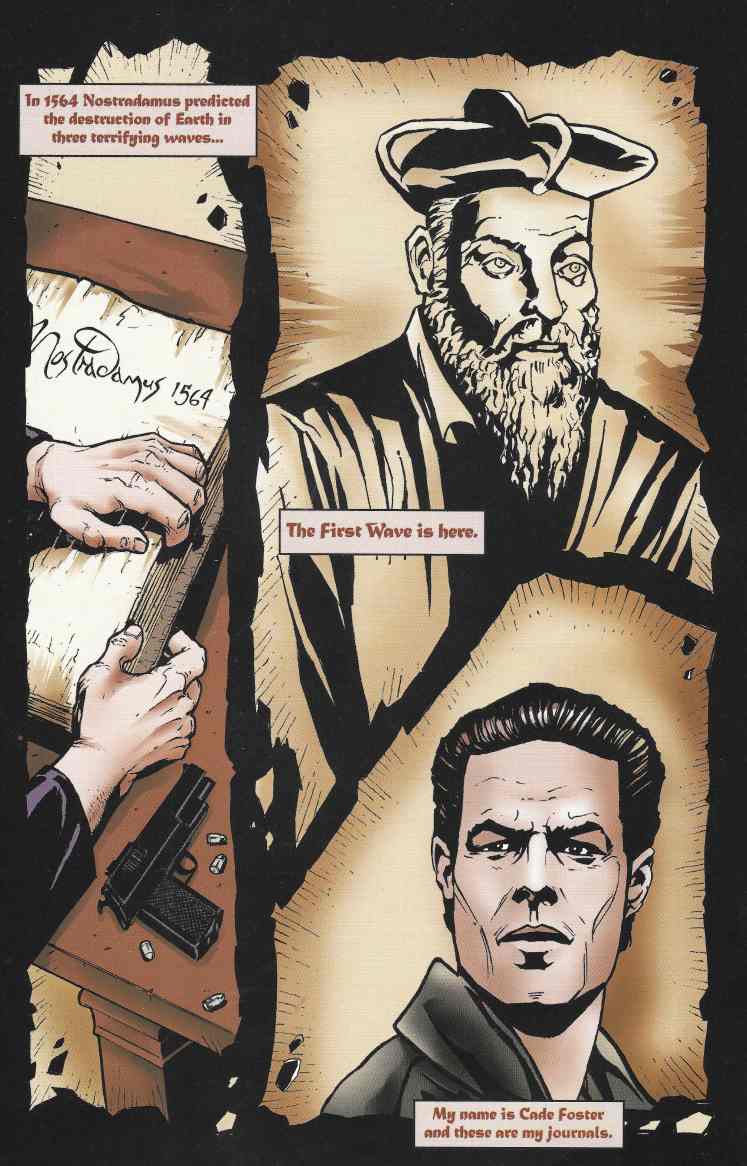 And doesn’t quite do it justice, which might be for the best. This still leaves a bit of mystery around all these rough edges and sparse wording. 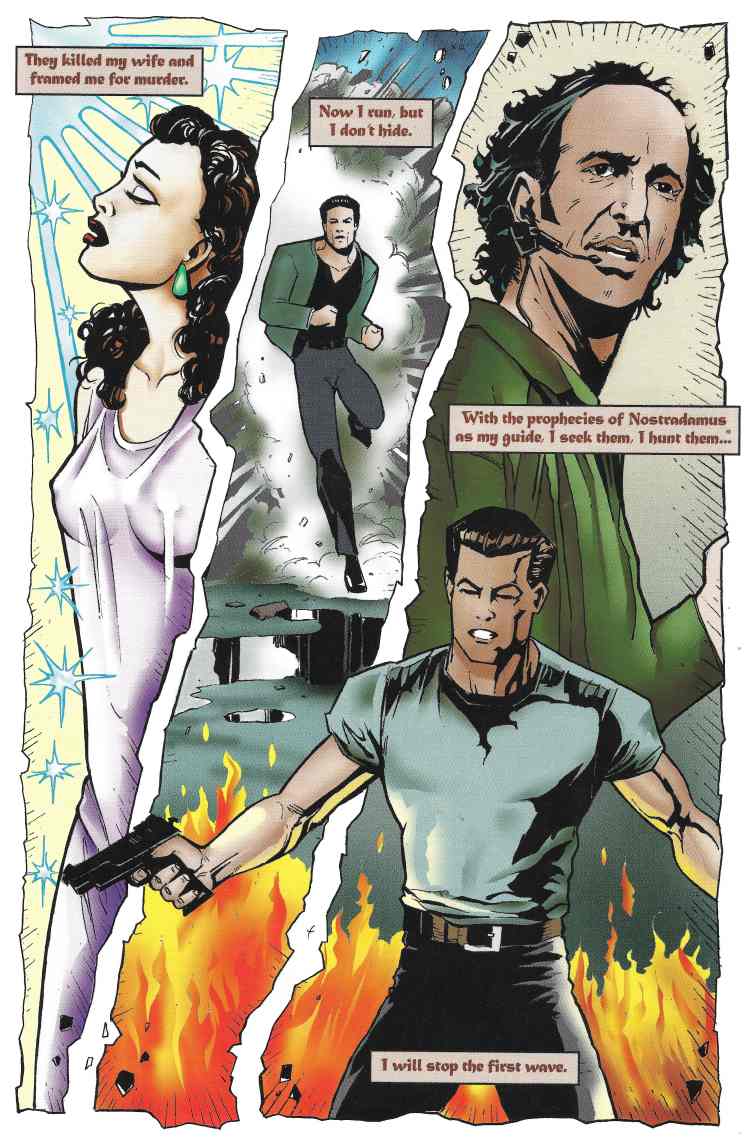 Then suddenly we get an overly long exposition dump stating that Cade’s on his way into Rikers, where he really shouldn’t go, prompted by the mysterious death of the three inmates and he’s already figured out the Gua killer-alien’s identity. Talk about taking the wind out of the story. It would be kind of neat to have Cade have to mix with the population and then learn the guys identity or something, but no. He just knows, folks. 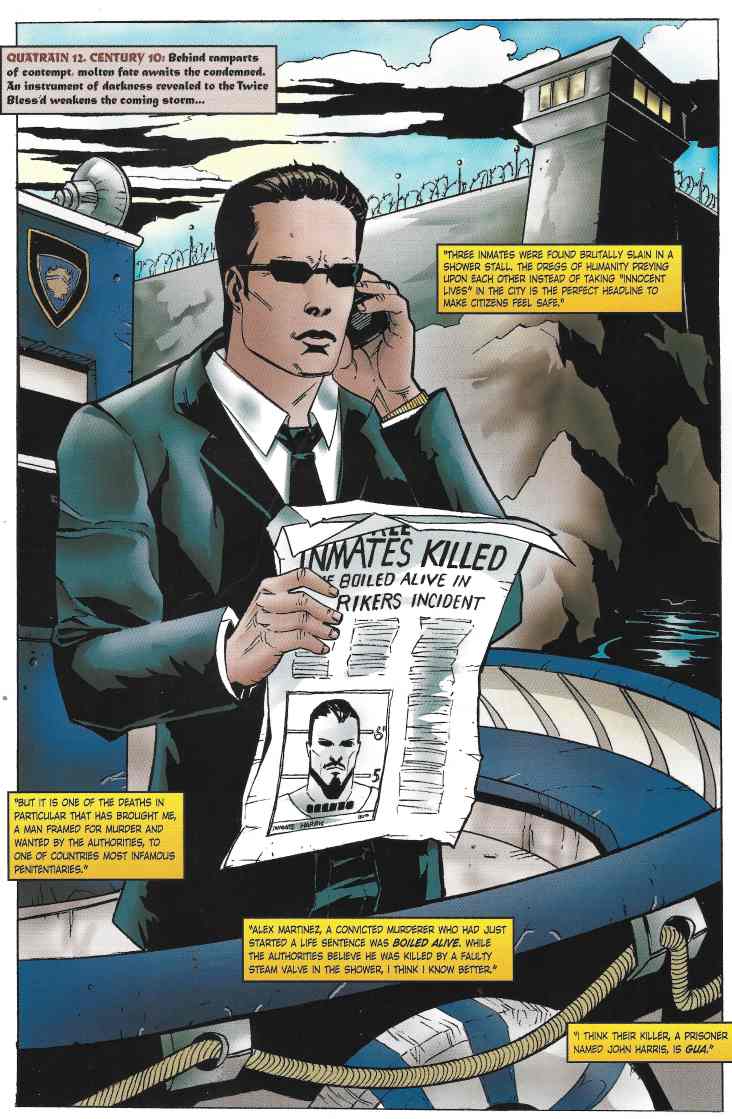 And while knowing is half the battle, the other half is not getting caught and put behind bars himself. That task is within his buddy Eddie’s wheelhouse. As is information on the killer. 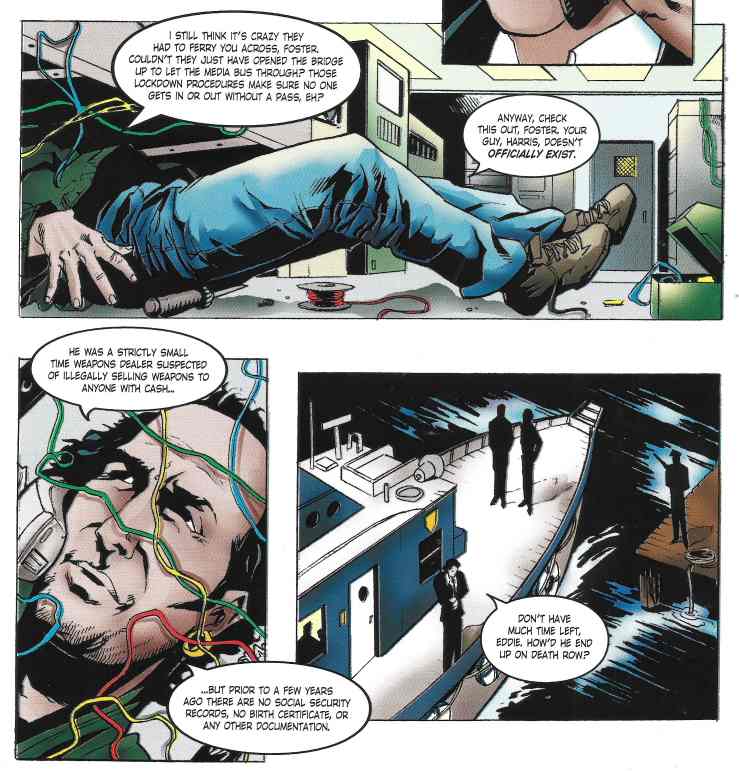 And apparently video games. While Eddie settles in for some Space Invaders, Cade uses the reporter credentials his friend has made for him to play the real-life version. 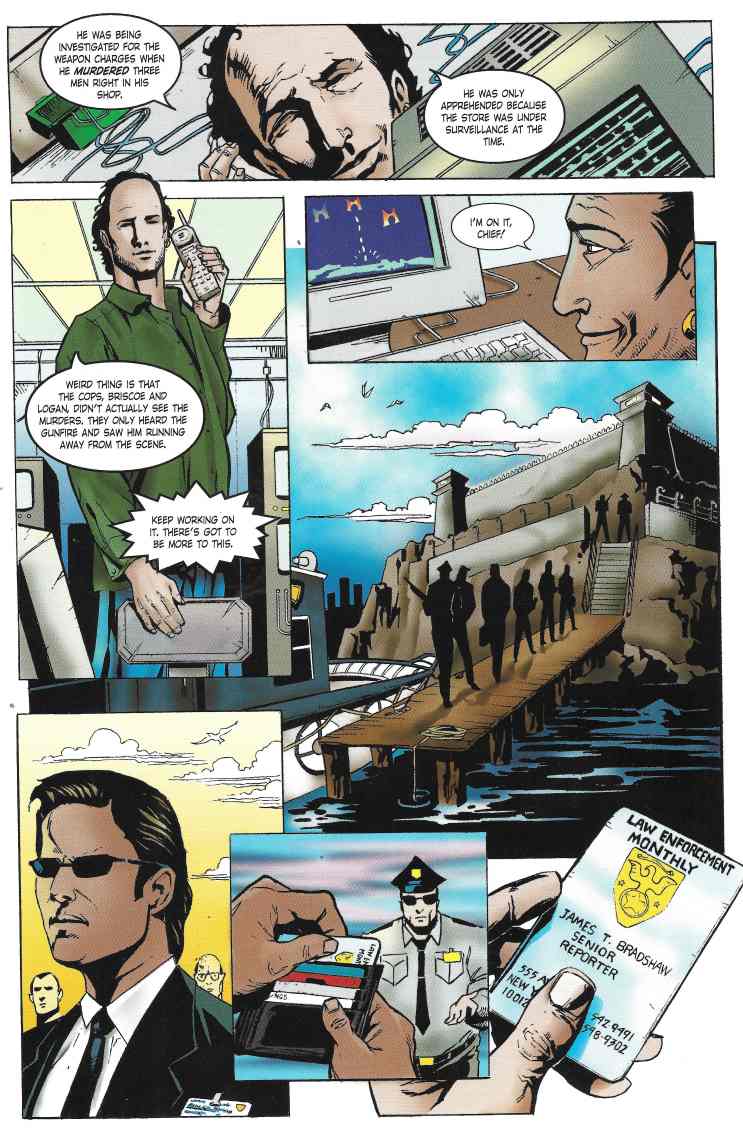 He starts by blending in, not creating a scene or drawing attention to himself by asking weird questions. Or, you know, the EXACT OPPOSITE OF THAT. 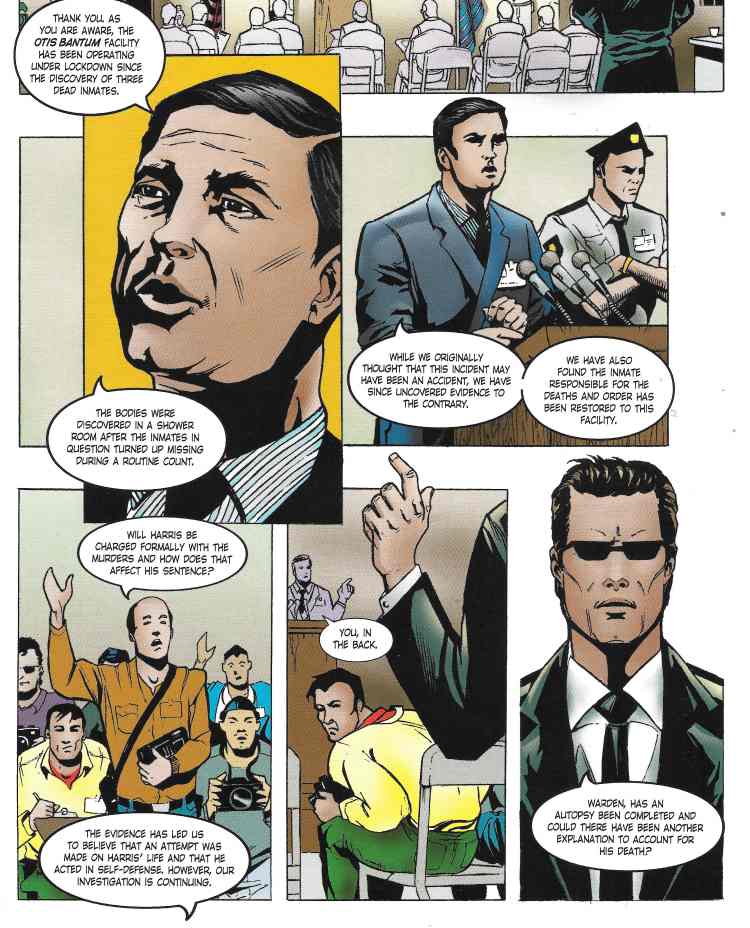 “Is it possible it was aliens? Who am I again? Uh…I’m Fade Coster of the Lone Gunman newsblog, why do you ask?”

Whatever it is in this response that gives Cade a reason to think Gua, I can’t figure out. The guy (not Gua) might know Martial arts, maybe? Some kind of advance fighting style and muscles that don’t quit? There are guys that can take out three attackers, is what I'm saying. I mean, Bruce Lee would have handed three guys their heads in no short order. Yet Cade is sure enough to notify Eddie right away, and when that is happening his appearance doesn’t go unnoticed by this prison guard. 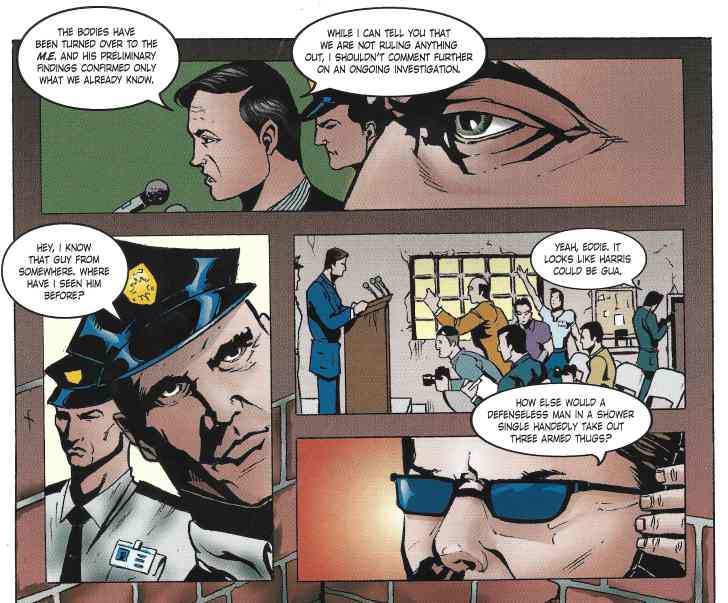 Meanwhile Harris is just sitting in his cell with his eyes all aglow waiting for Cade to find him, one assumes.

And Cade is out here smooth-talking this prison admin lady so he can get access to Harris. It’s one of those completely implausible series of cliché lines… 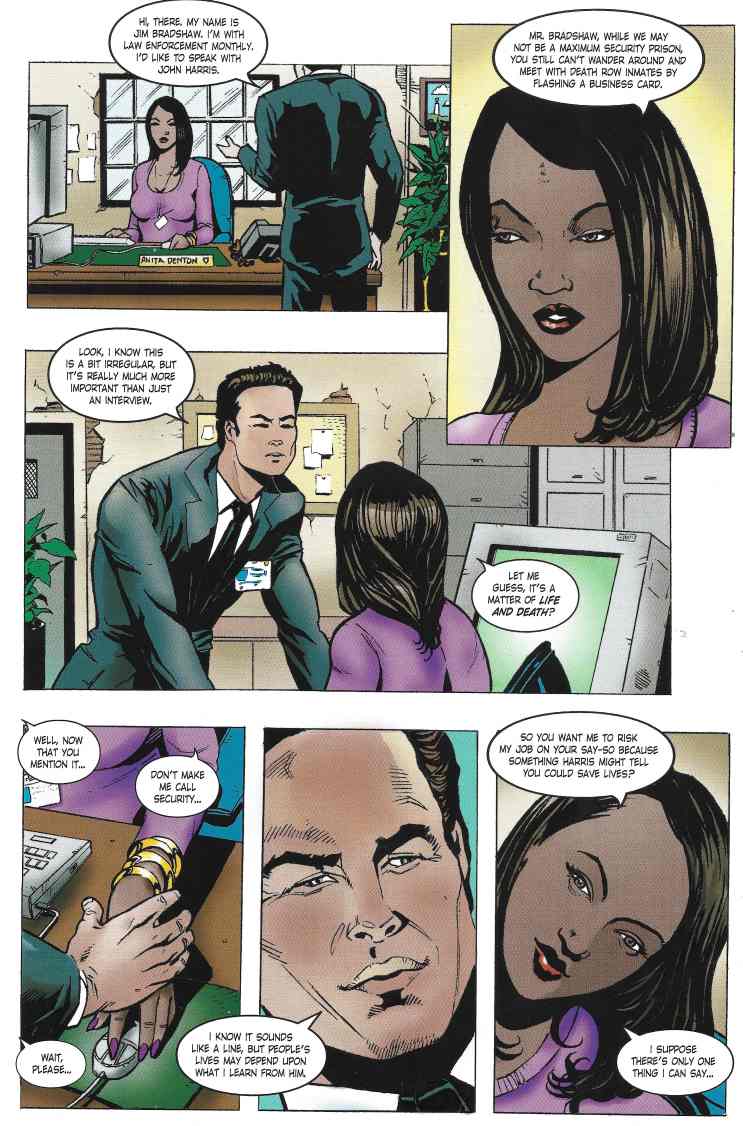 …that totally work in this instance.

Mainly because if it didn’t, we’d have no story. And speaking of stories, it looks like Cade’s "telling stories" is about to catch up with him. 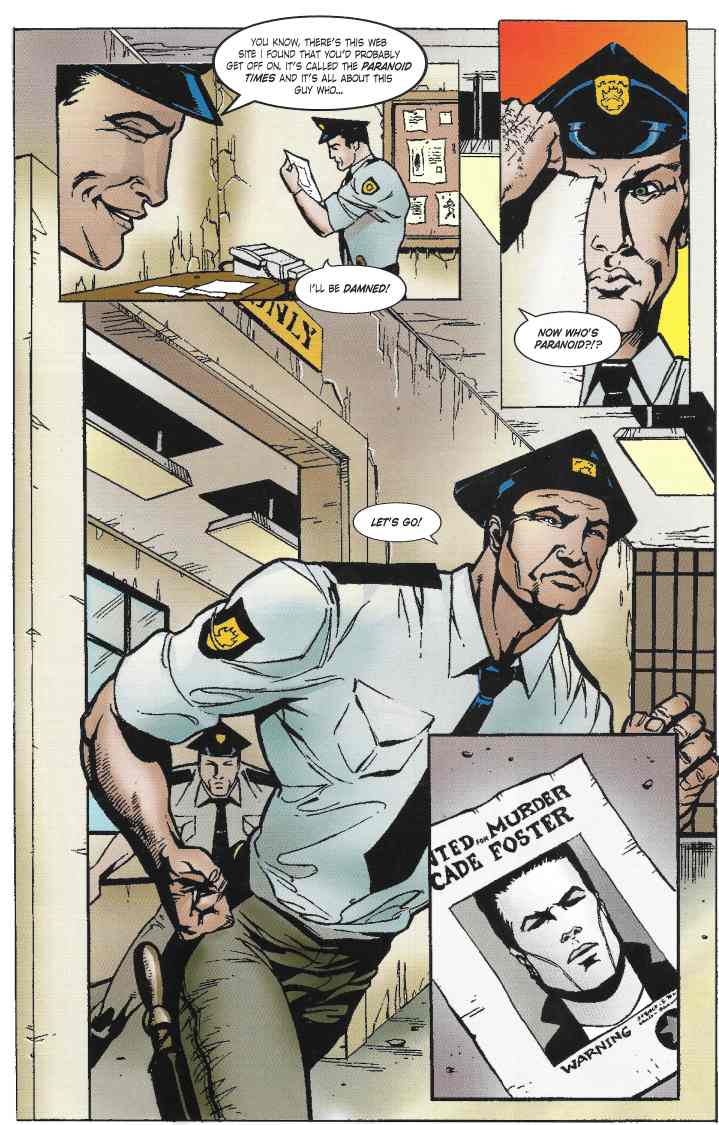 While our guard has figured out Cade’s identity, he hasn’t figured out that Cade's just gotten a private interview with Harris. Cade allows Harris to play dumb for a bit… 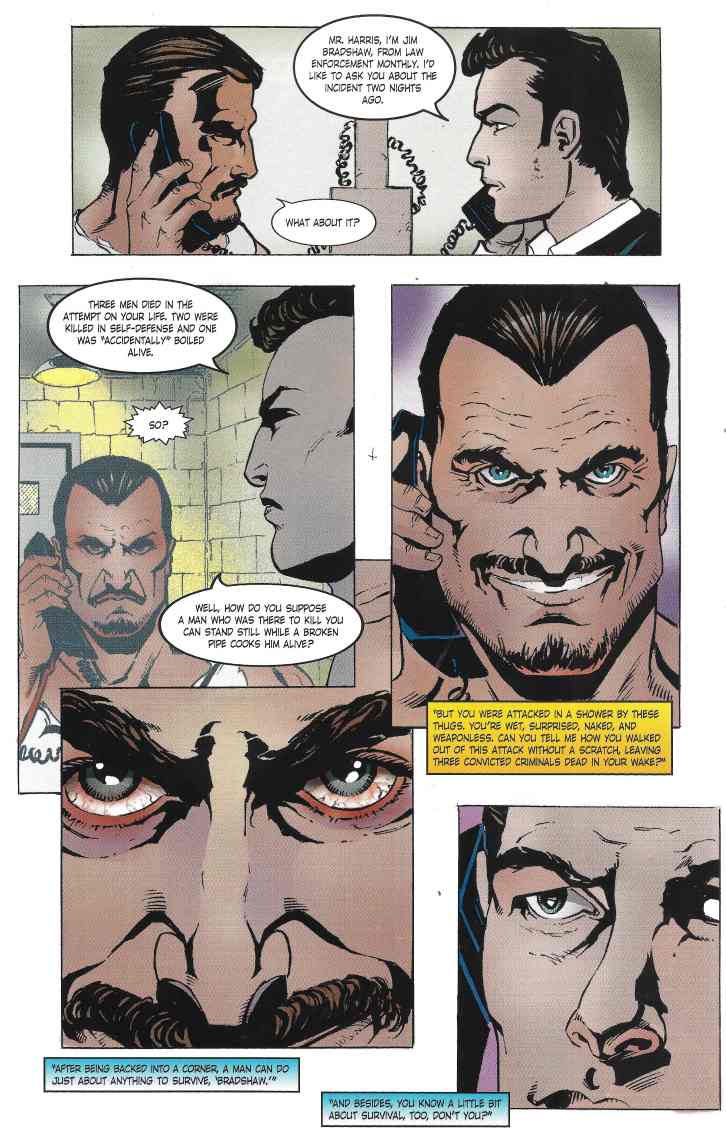 But Harris knows the score.

He doesn’t cook Cade with his mind powers because our guard shows up to bash Cade’s face into the glass and call in the NYPD on him. 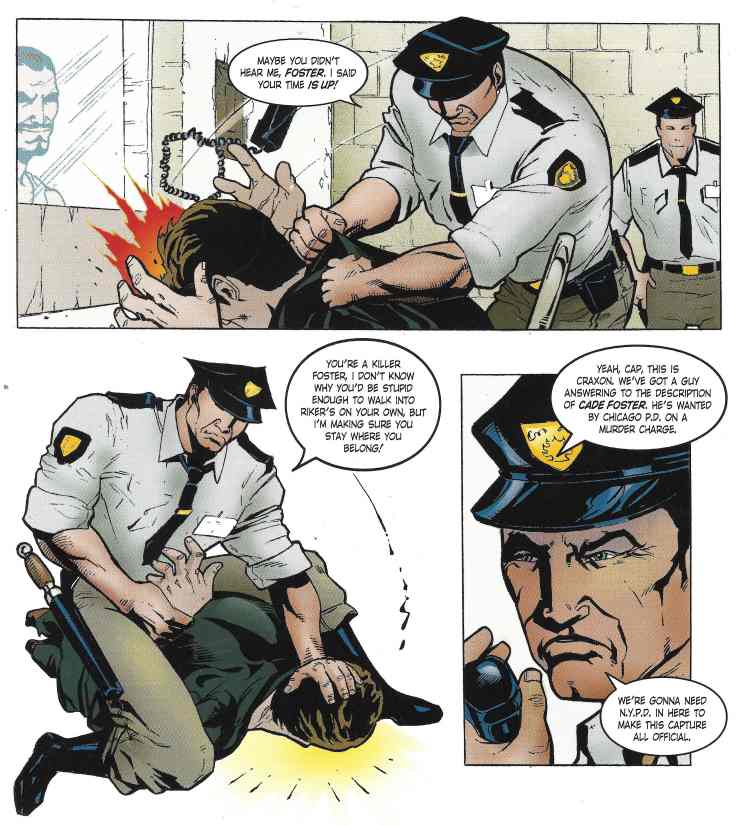 And somehow that the book won’t go into explaining, Cade is allowed into general prison population on Rikers, without the messy details of a trial or a lawyer or any of that mess. He just trades his suit for orange pajamas and in he goes. He does meet Jynx, that guy who knows how everything works in the joint you see in every prison movie. 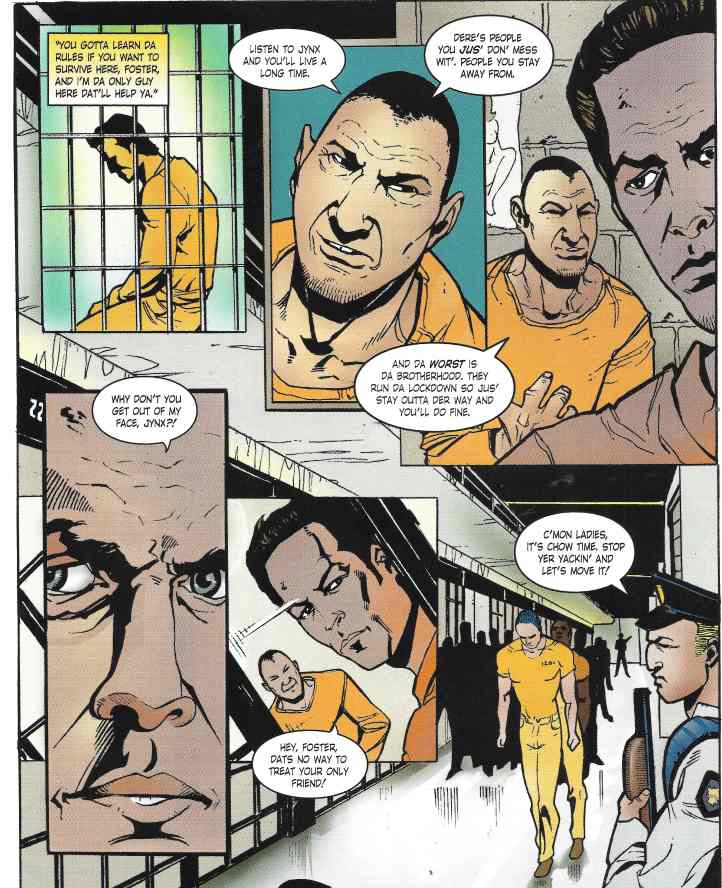 Jynx can tell you about everything in here, like how the food smells worse than it tastes and about who to avoid… 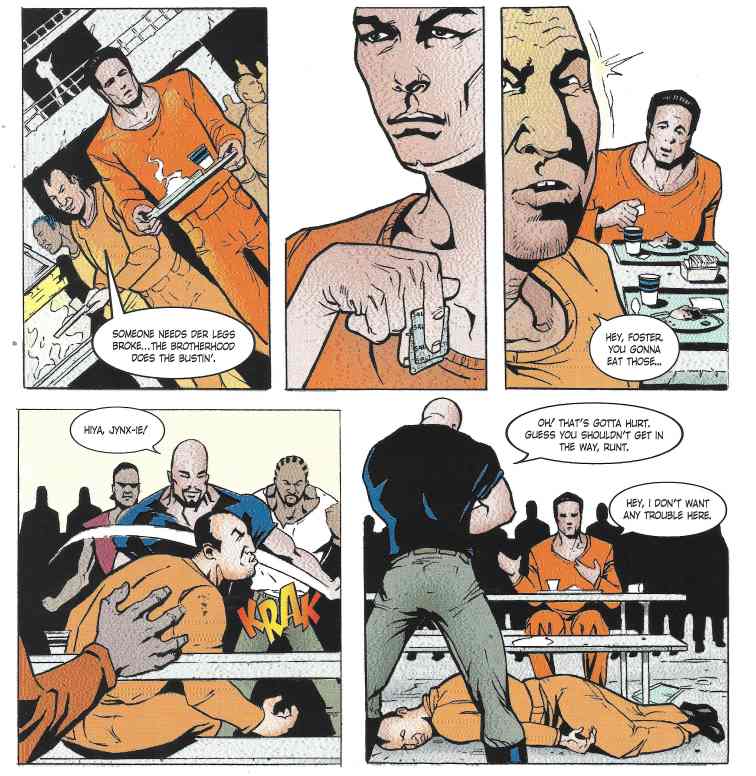 Yeah, the Brotherhood. That’s who you avoid. Not doing to good there, Jynxie! Seems you can tell everything about prison except for the fact that you are named Jynx for a reason.

It looks like they want a piece of Cade, too. A not so well drawn piece. That neck motion in panel three is impossible by anything other than an action figure. 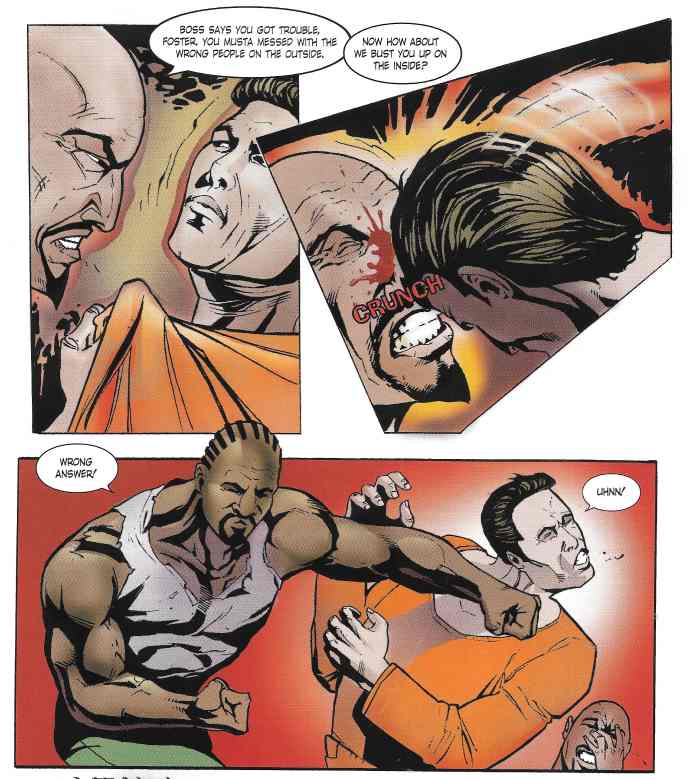 It’s like five on one and Cade is barely holding his own for a bit, then he gets pinned and an unlikely protector shows up… 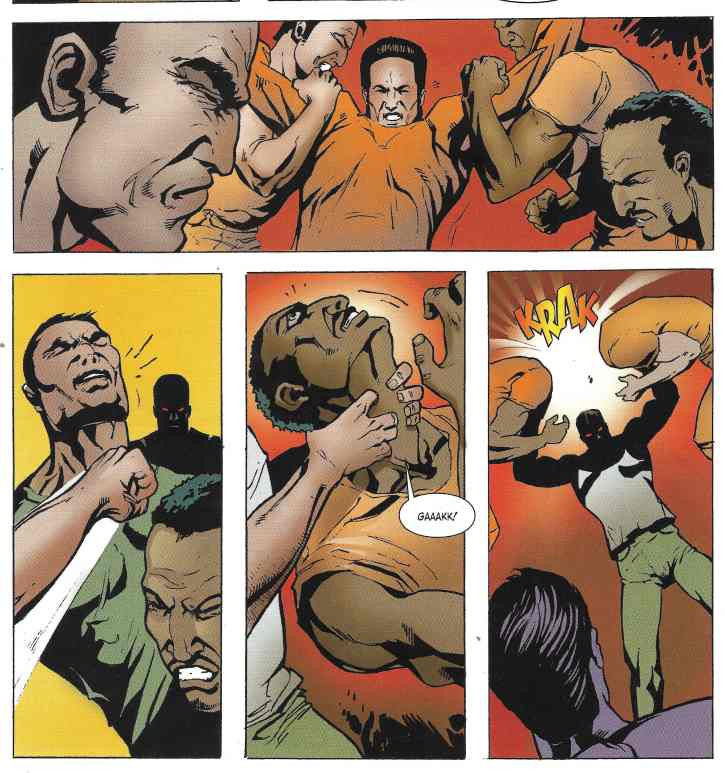 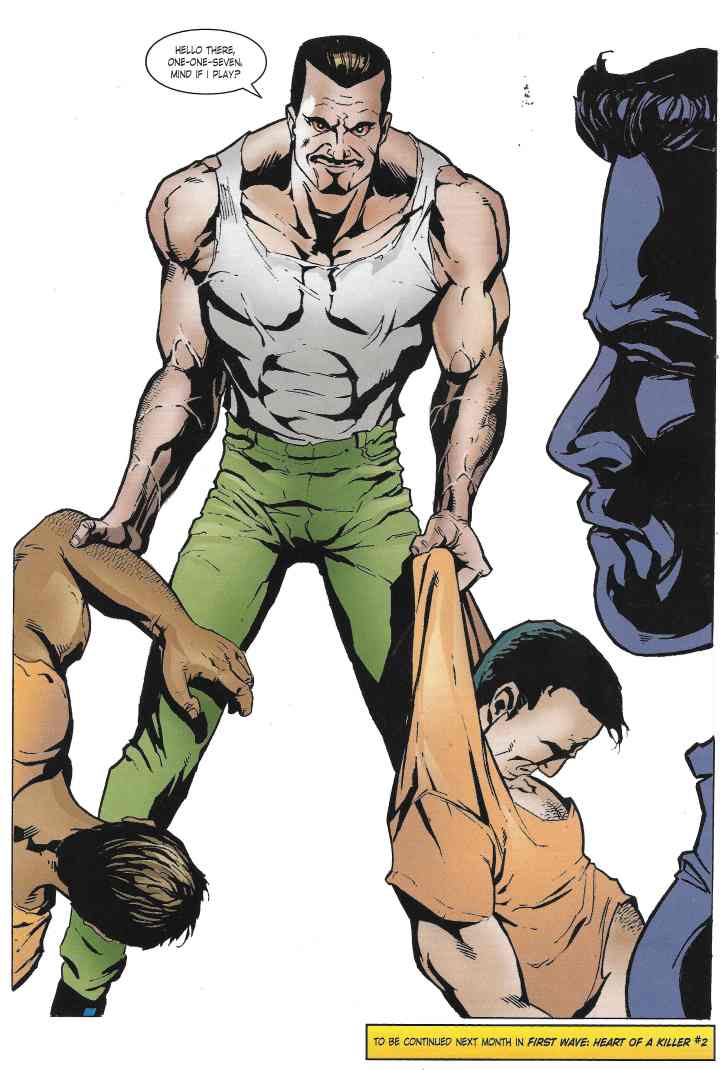 And that is where we say goodbye to First Wave, lucky readers. The Crapbox didn’t see any of the other five, so I don’t know how this ends. I’m not distraught about that fact at all. What little promise the book was riding on since that first sequence has long since dissipated and I’m no longer interested. Same goes for the episodes on YouTube. Pretty sad when you can’t give sci-fi away.
Posted by SonOfCthulhu at 8:18 PM