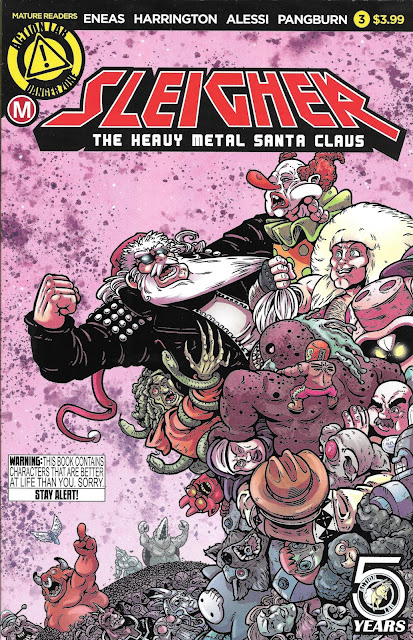 Here is a concept that should be a hoot: a hard drinking, head-banging heir to the line of Kris Kringle who spends his time fighting the Christmas-themed enemies who would turn the holiday season into a nightmare. Sounds like more fun than a mosh pit full of Red Bulled metal heads, right.

Sleigher is a four-issue miniseries by the unknows Adam Horrigan and Axur Eneas. This is Horrigan’s only work, according to Comic Vine. Eneas’s work we’ve already seen when we reviewed Ghoul Scouts: Night of the Unliving Undead back this Halloween. He’s got the chops to have a few other titles under his belt, including Aero-Girl and it subsequent continuation.

Unfortunately, issue three appears to be where they stopped having Sleigher putting fist or boot from such menaces as evil snowmen and perverted toymakers. Instead they decided the book needed a dramatic arc, which typically I’m all for. Typically, that is if in a book such as Sleigher the arc is covered in the background goings on and doesn’t interrupt the punchy-punchy, run-run.

Let’s smash our way in to the opening scene so you can see what I’m talking about. We begin our tale with Sleigher in a bit of trouble. Although it isn’t mentioned, he’s been sucked into Santa’s magic bag. In my mind that wouldn’t be such a bad place to fine oneself, however there’s a dark secret I didn’t know.

Santa appears to be at war with demonic trolls who have been trying to ruin Christmas for centuries. And the magic sack serves as their prison. That means that all of these mutants you see arrayed before Sleigher are evil turd-balls in need of a good butt kicking.

Luckily Sleigher has got that well in hand…or rather, fist. 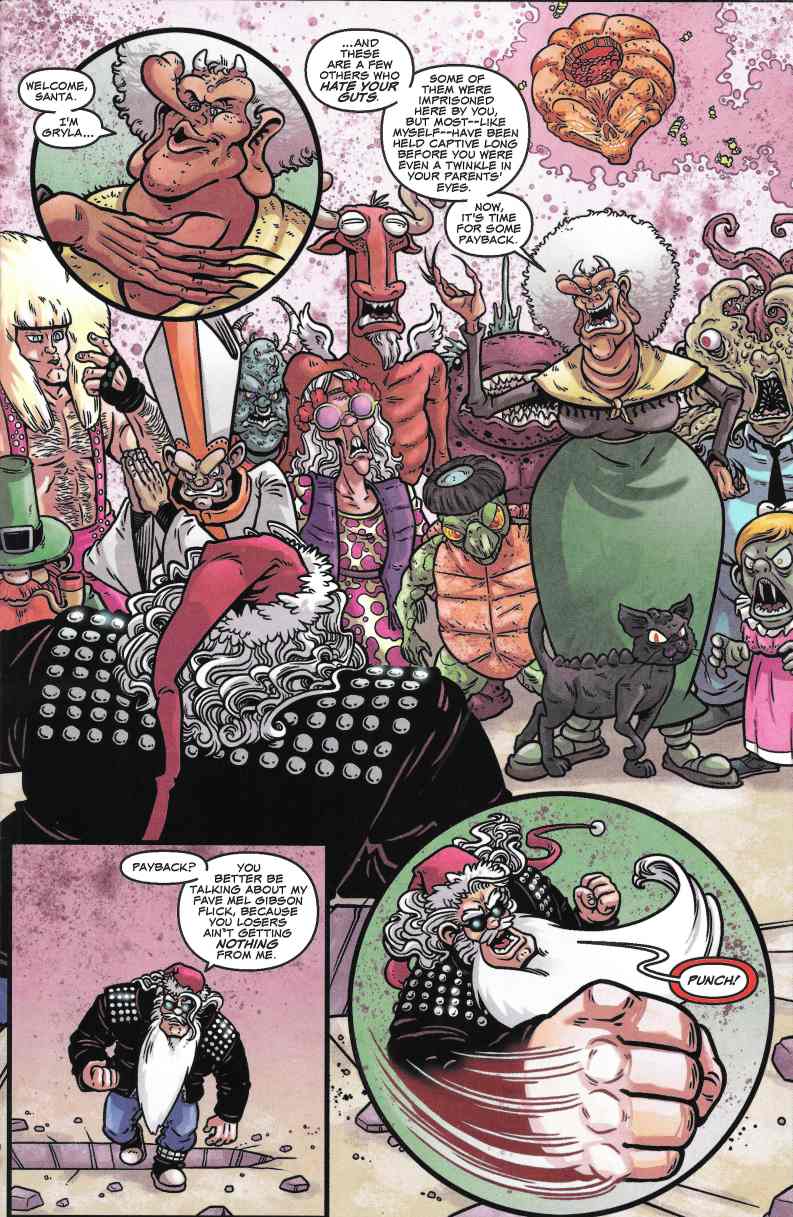 What isn’t lucky is that Gryla stops Sleigher’s punch one-handed. She then smacks or heavy metal hero around and turns him over to her goons. 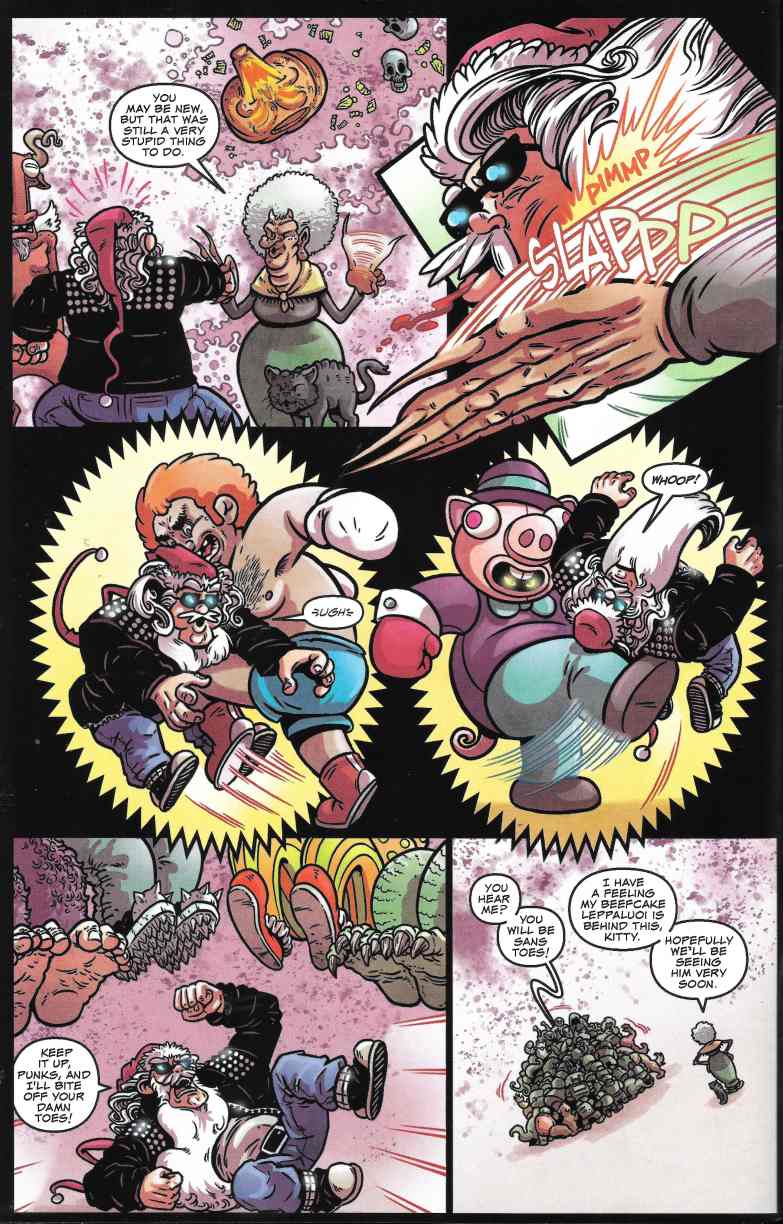 In that last bit she mentions Leppaluci, an…elf? Troll? Heck, I don’t know what he is. Ugly. He’s that. An ugly accomplish who is responsible for Sleigher falling into the sack. He’s also experimenting with the bag for another nefarious purpose… 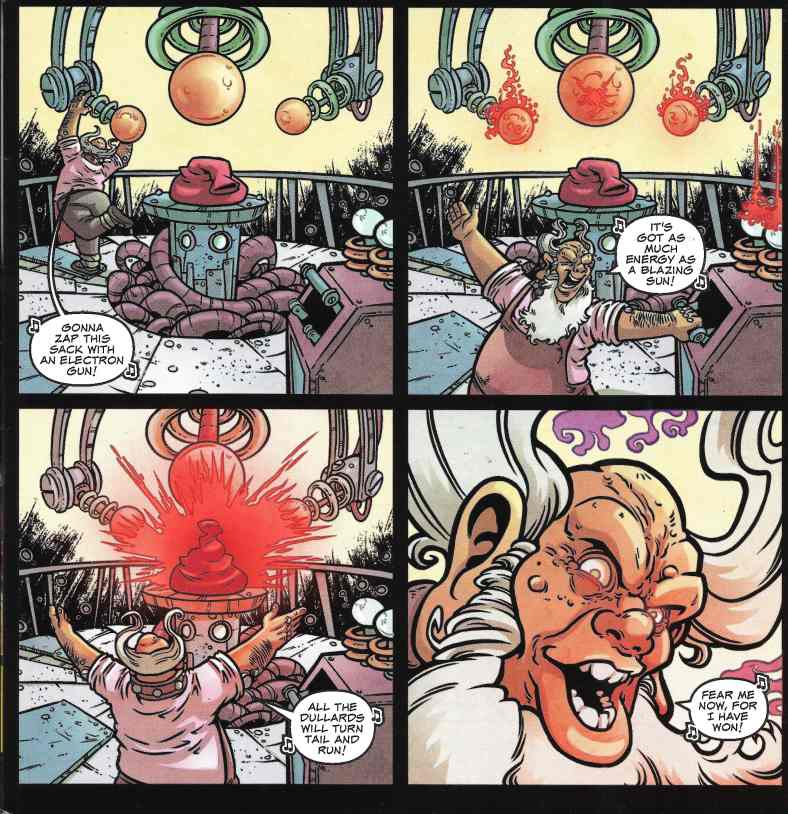 And all that “winning” leads to Sleigher watching all his enemies ascend out of the bag’s opening back into the real world leaving him trapped. 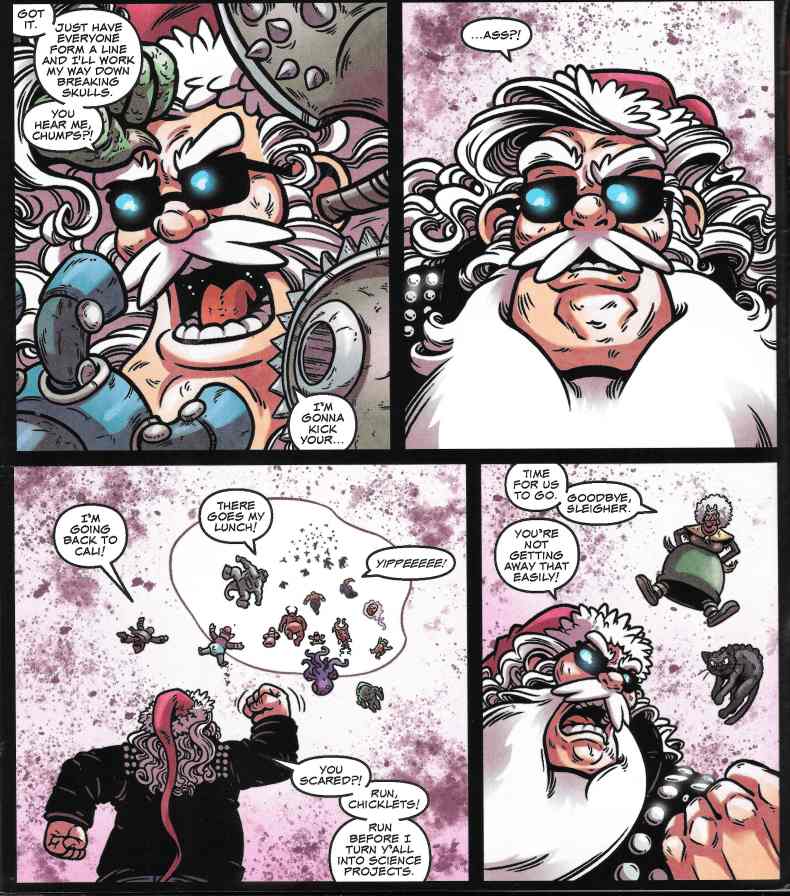 And contrary to his threats, stopping them is not something that is within his power. Oh he makes an admirable effort, but he’s just too late. 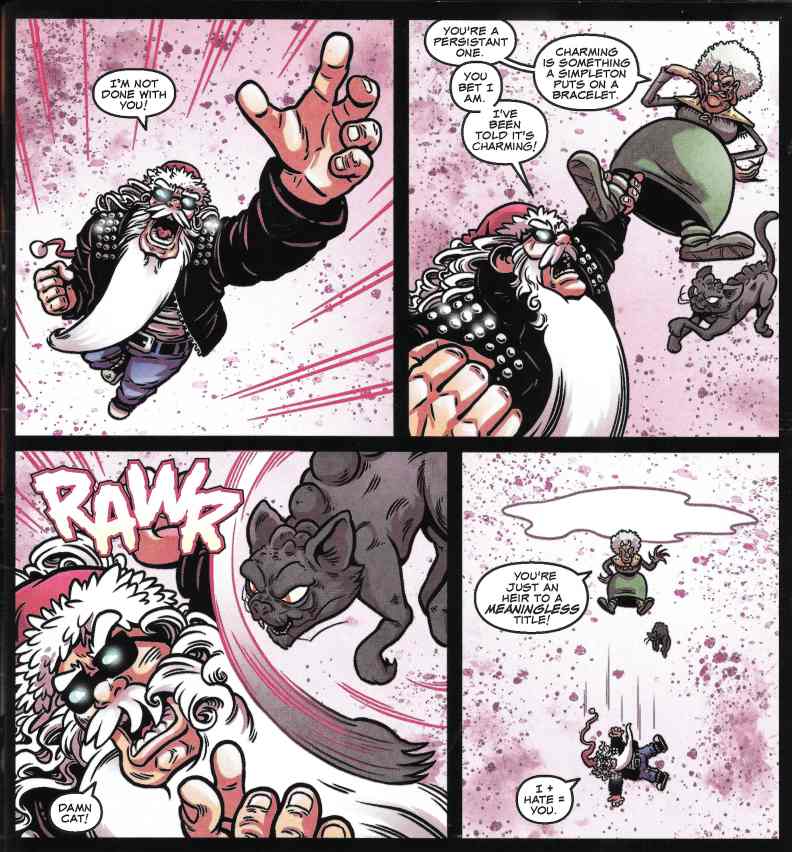 All of this culminates in a kaleidoscope of colorful smoke flares, which basically means… 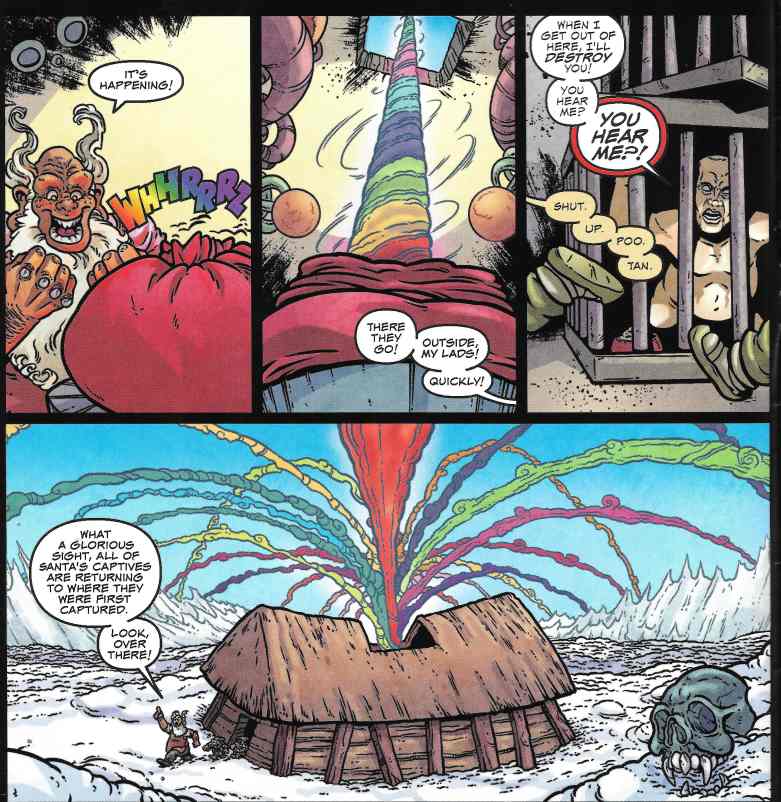 Gryla’s out, in love with Leppaluci, and apparently she’s the mother to Santa’s elven helpers. Also she’s here to eat naughty children, destroy Christmas, and various other villainous stuff. But wait… 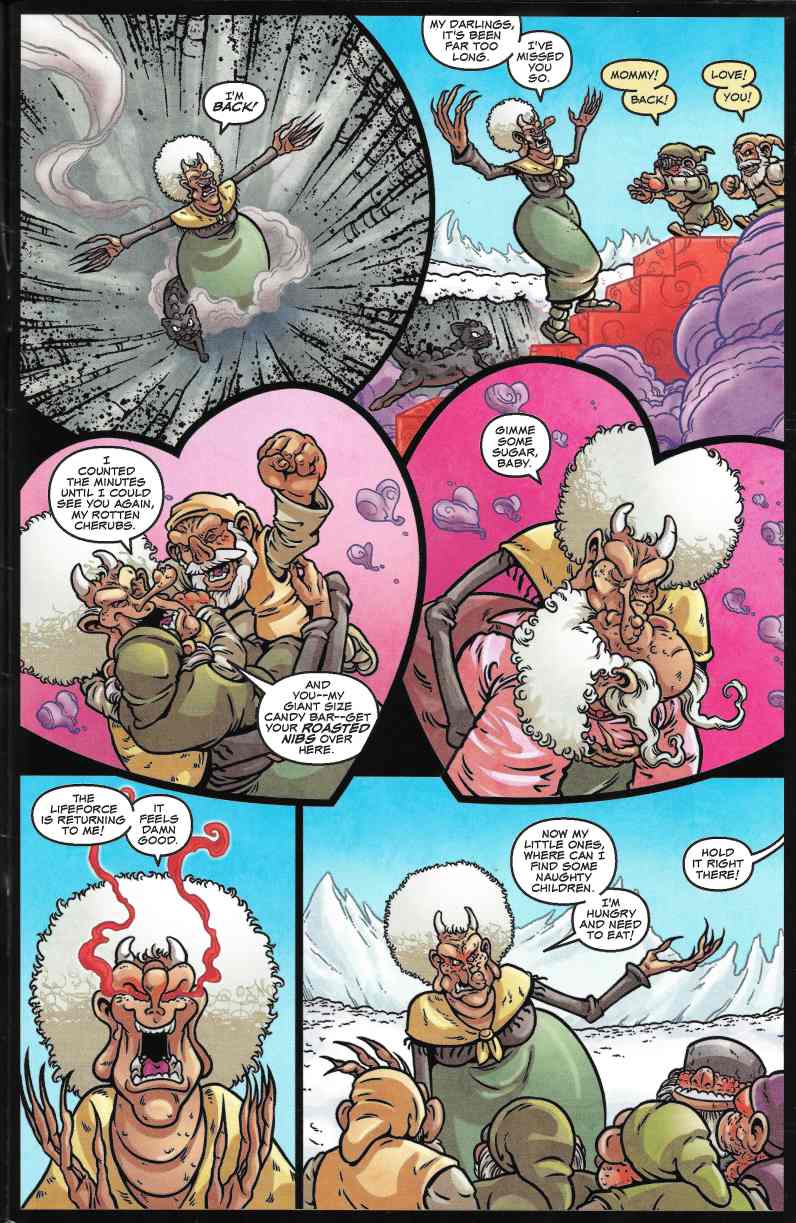 …in flies Sleigher’s grandfather, the current reining Santa Claus and his “Elf Troop” to save the day. 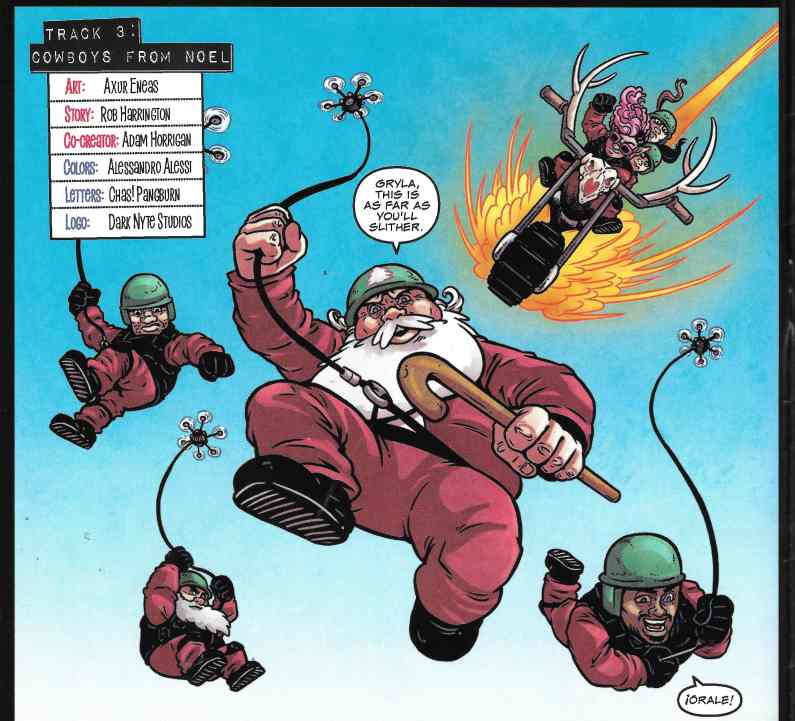 Is that a Hispanic elf in the bottom corner? How does that even happen?

Santa and Gryla sort out a bit of awkward relationship history and then we go straight to battle mode, which is a blessing. 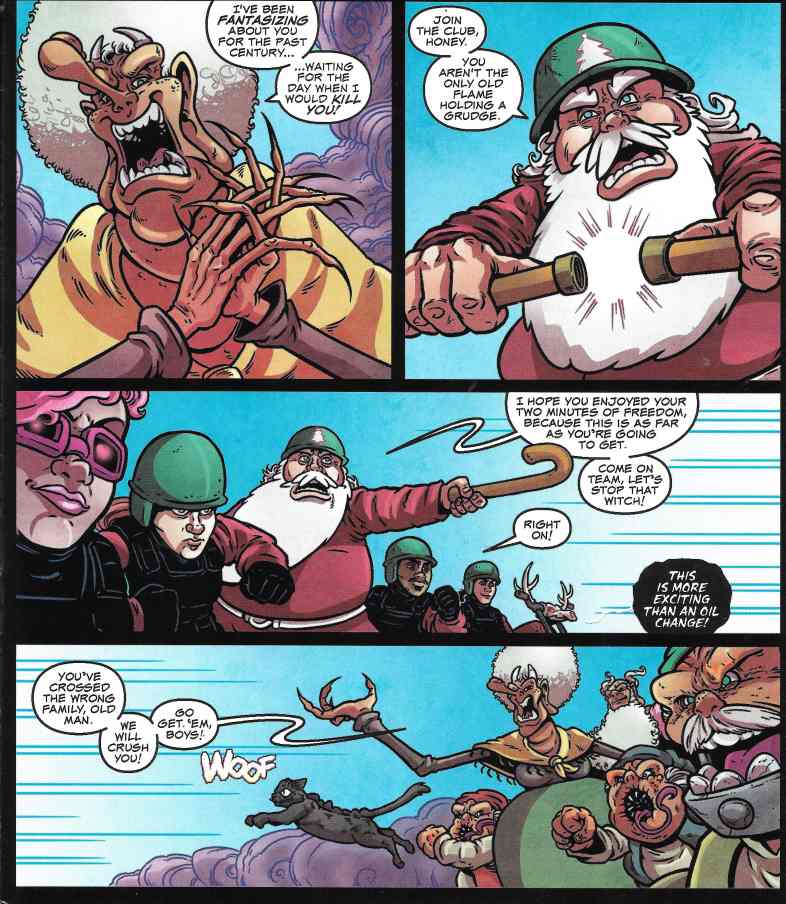 But it’s not the fight we paid for. We paid for Sleigher stomping in bad guy’s faces, so where is the big lug? We check back into the bag and find he’s talking to an invisible voice that speaks in blue word balloons. 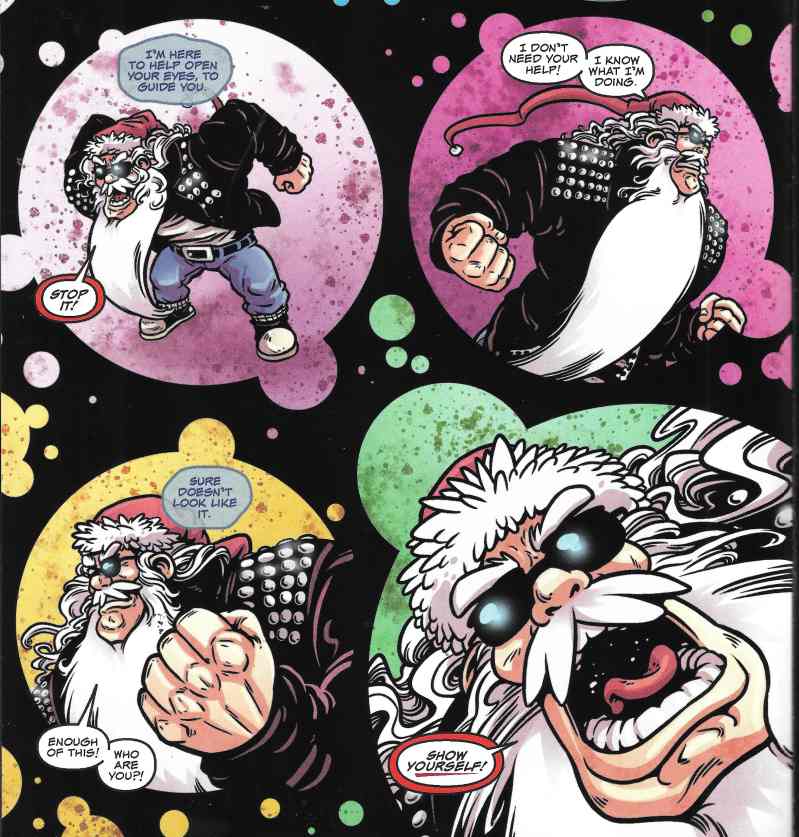 And when the voice does manifest, it turns out that it is attached to his mother. If I’m reading my metaphors right, she has something to show him (literally). 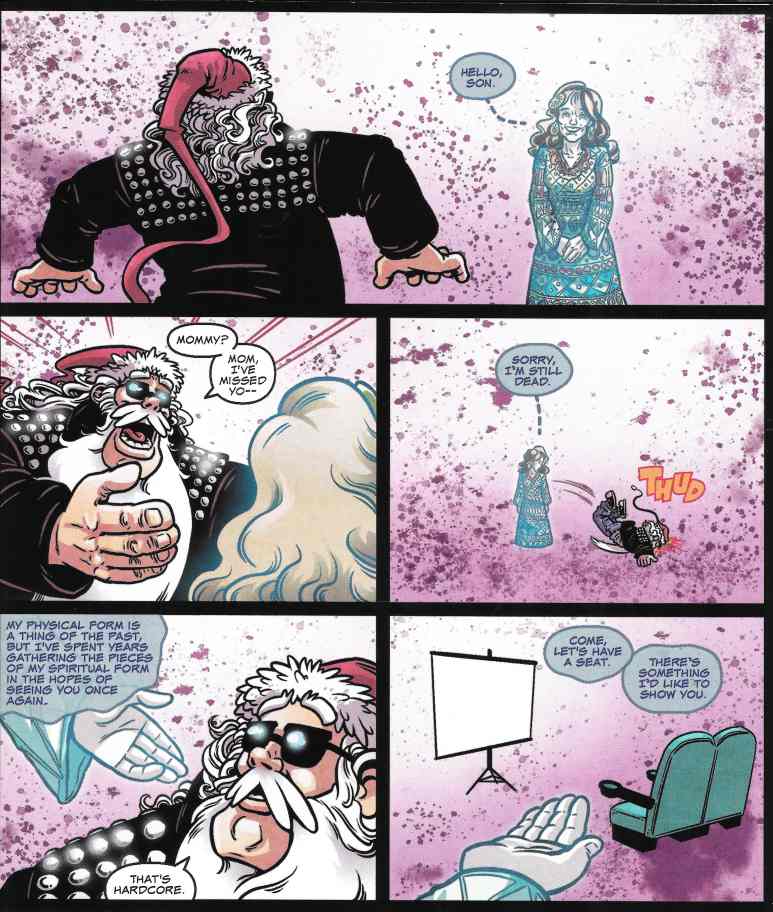 The screen shows Sleigher’s childhood and how his dad was too busy fighting evil and delivering presents to be much of a father to Sleigher. 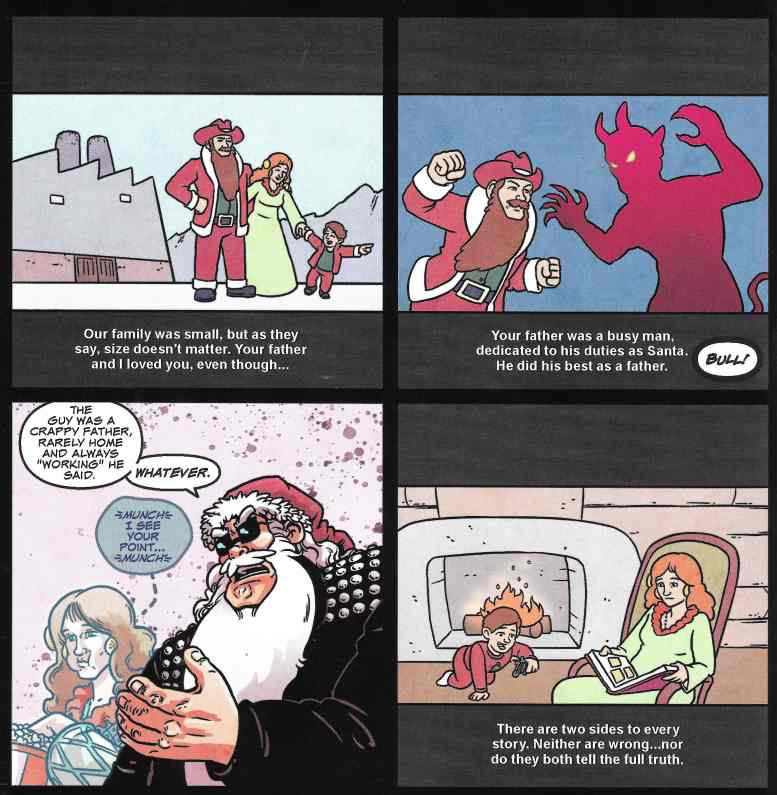 It goes on to show his mom abducted or killed by the same evils his father fought. In the production it happens right before the young Sleigher’s eyes, but not sure how literal we should take that. 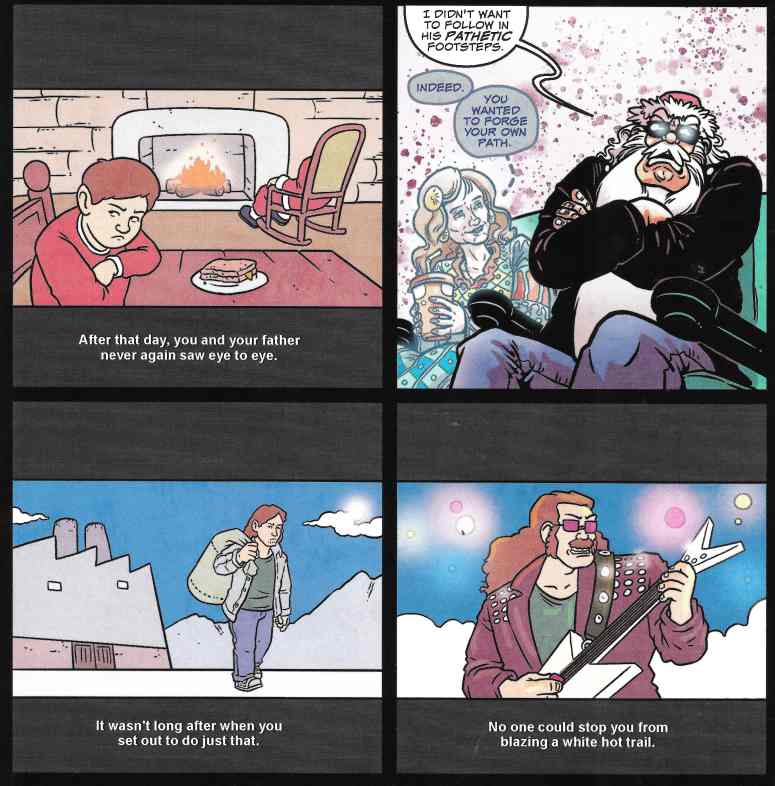 And this is where we get that Sleigher is a reluctant hero-bit, who has to be convinced that fighting his father’s fight is worth it. This is really great story setup that hits all the right notes, but it appears to be an info dump of stuff that would have been better revealed slowly across several issues. Placing this long exposition piece in the middle of the book takes us away from the action, which is clearly the books strong suit. We need a little more ass-kicking over here, guys… 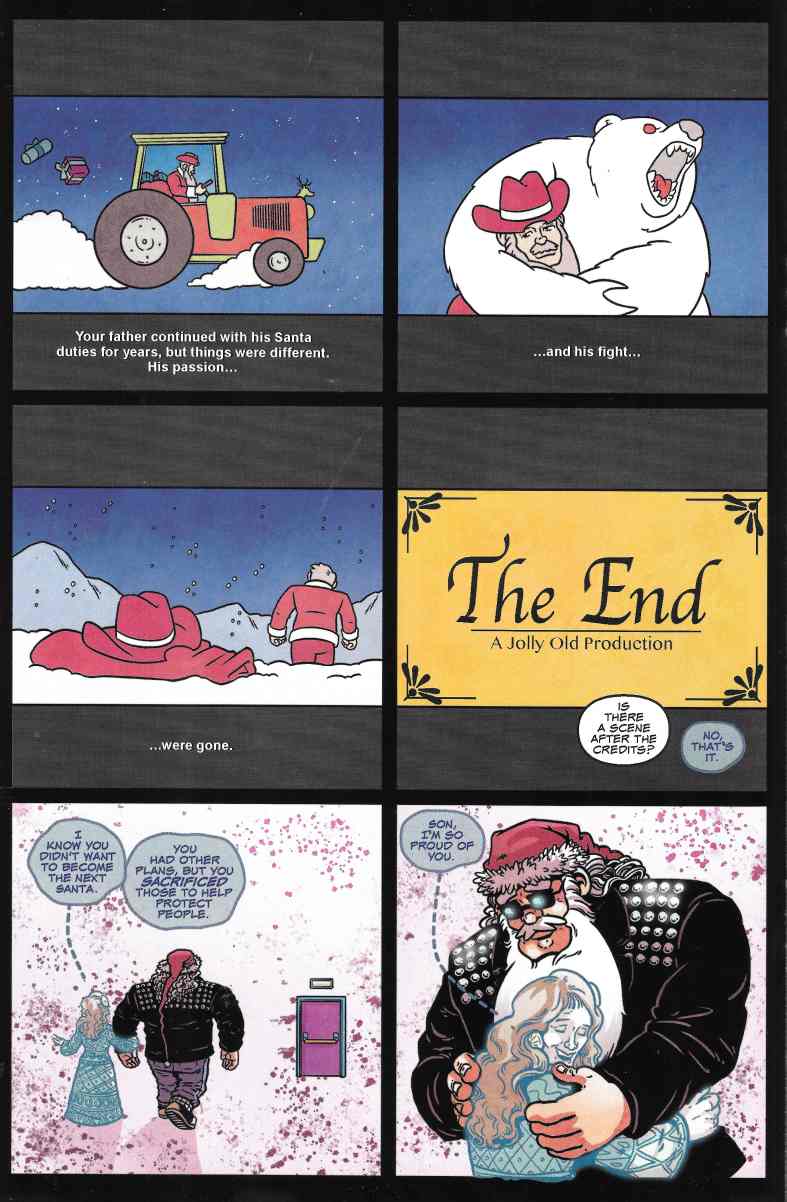 …instead we get a full page more showing how his father got killed by demonically evil, anti-Christmas polar bear and a very sentimental hug from his dead mom. Aww…

And THAT is our segue back into the Santa vs. Gryla battle, already in progress. We begin with Leppaluci getting the elf kicked out of him by Santa’s helpers. David Sedaris, eat your heart out. 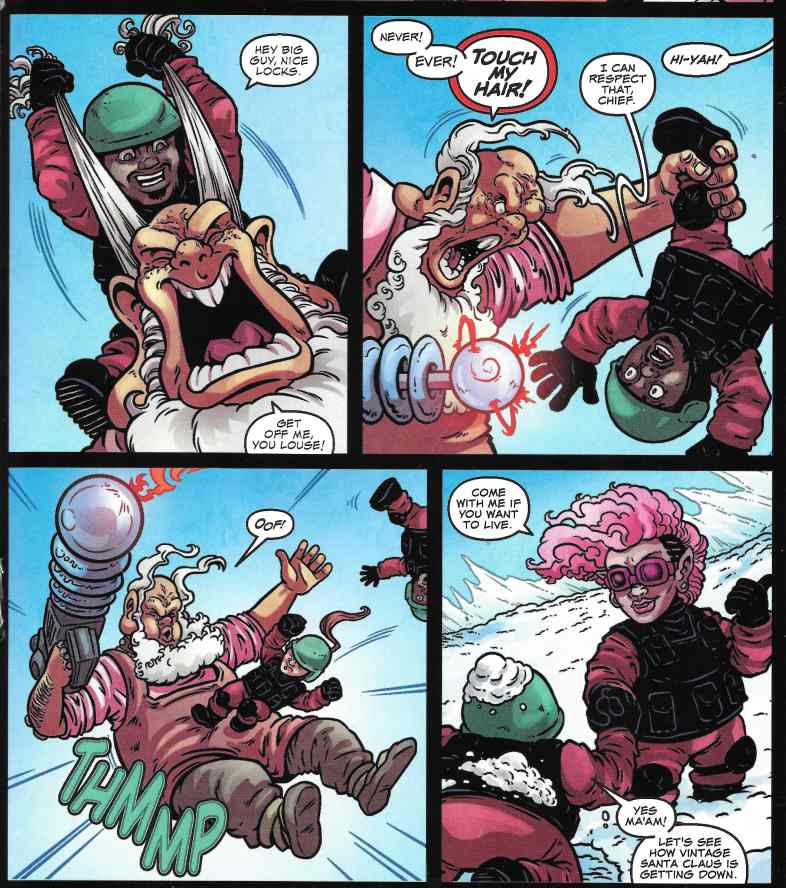 As for Gryla herself? She cold-cocks Santa out of the panel and appears ready to use all the negative energy bad children make to remake the world in her rotten image. 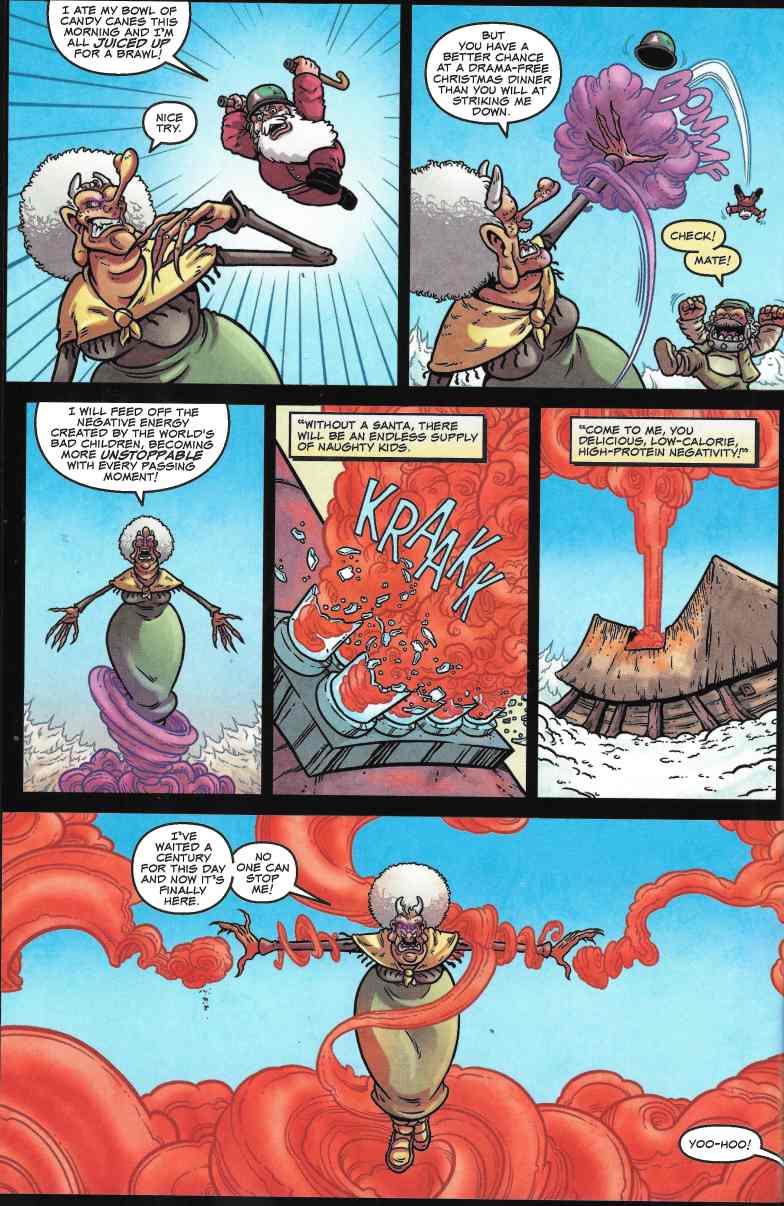 However Santa isn’t done yet. He seals himself up in a ball of magic that Gryla purple smoke can’t seem to penetrate. All the while that she is trying, Santa explains that he’s put all his faith in Sleigher, knowing his grandson has what it takes to defeat her evil schemes. 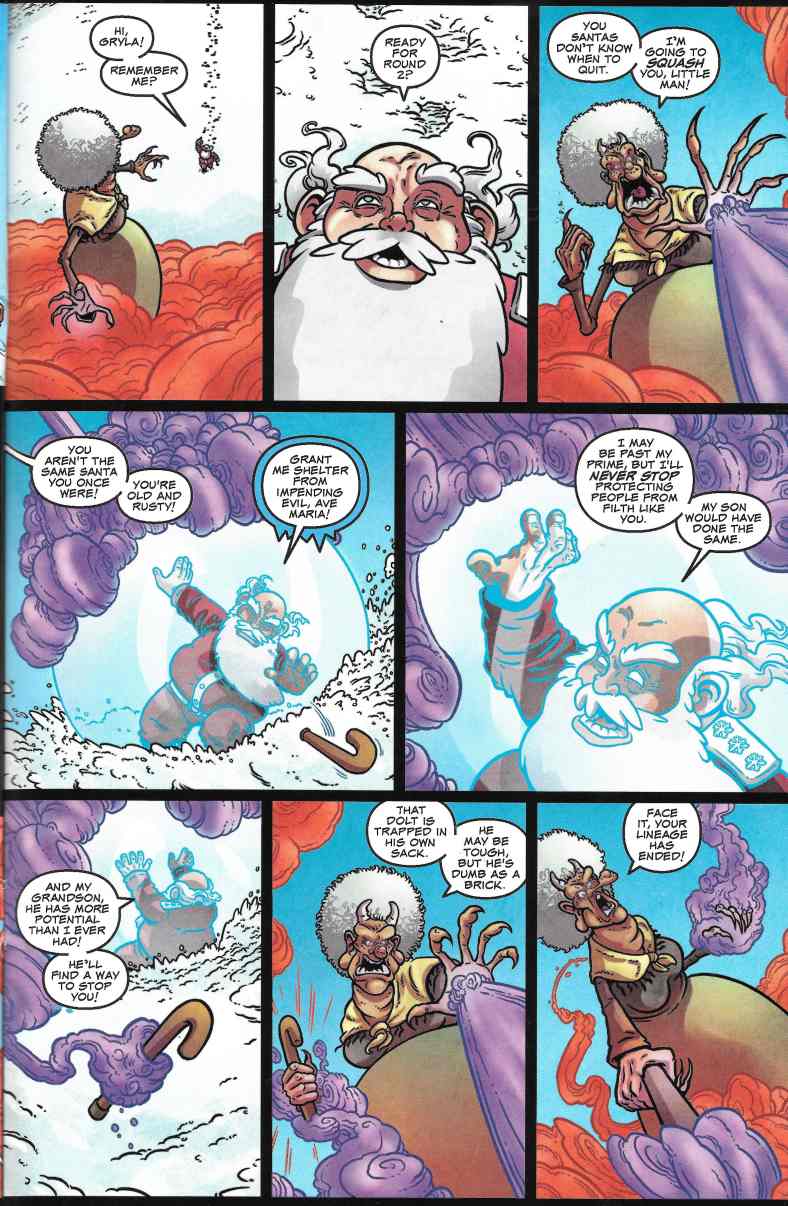 At that point Gryla decides she’s won enough for the day and summons a ship that flies on purple smoke power. In a lucky grab, Santa steals back his magic sack before Leppaluci can smuggle it onboard. 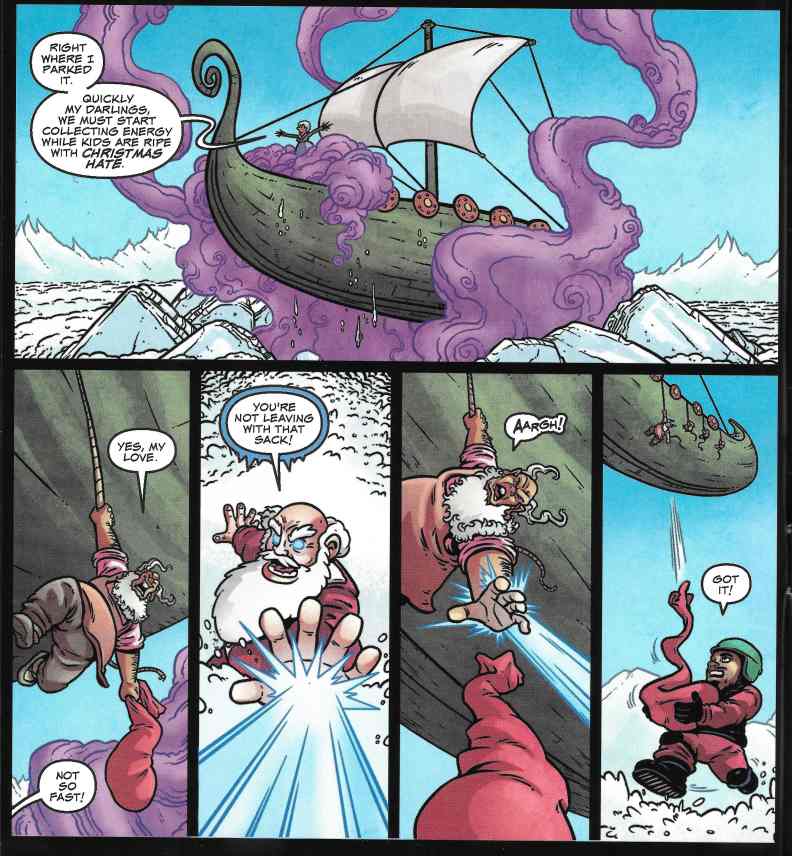 In a mistake she’s certain to regret, Gryla leaves the sack to Santa, who wastes no time in using the rest of his energy to release his grandson from captivity. 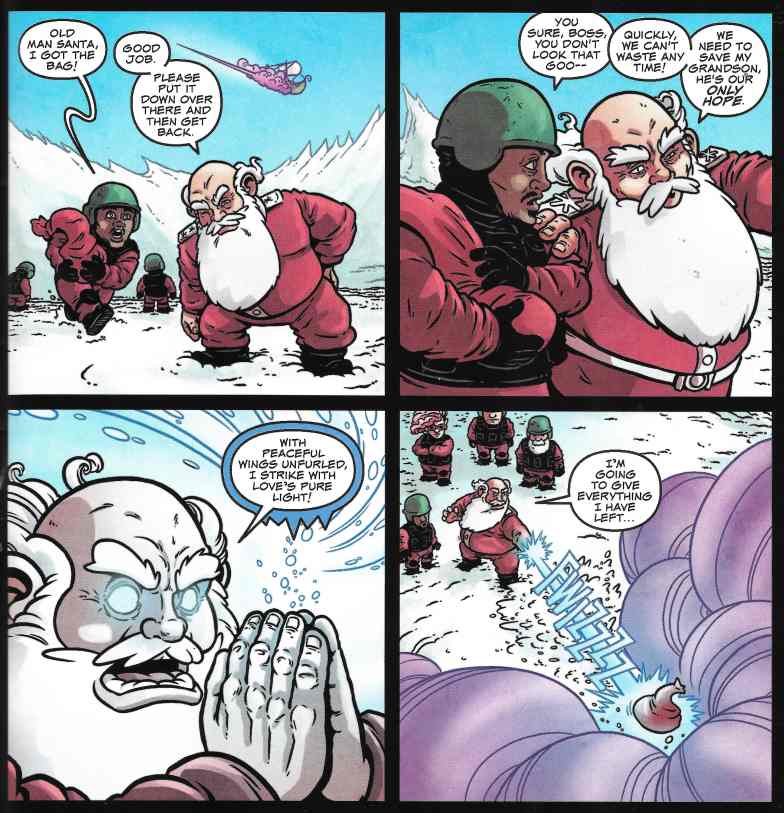 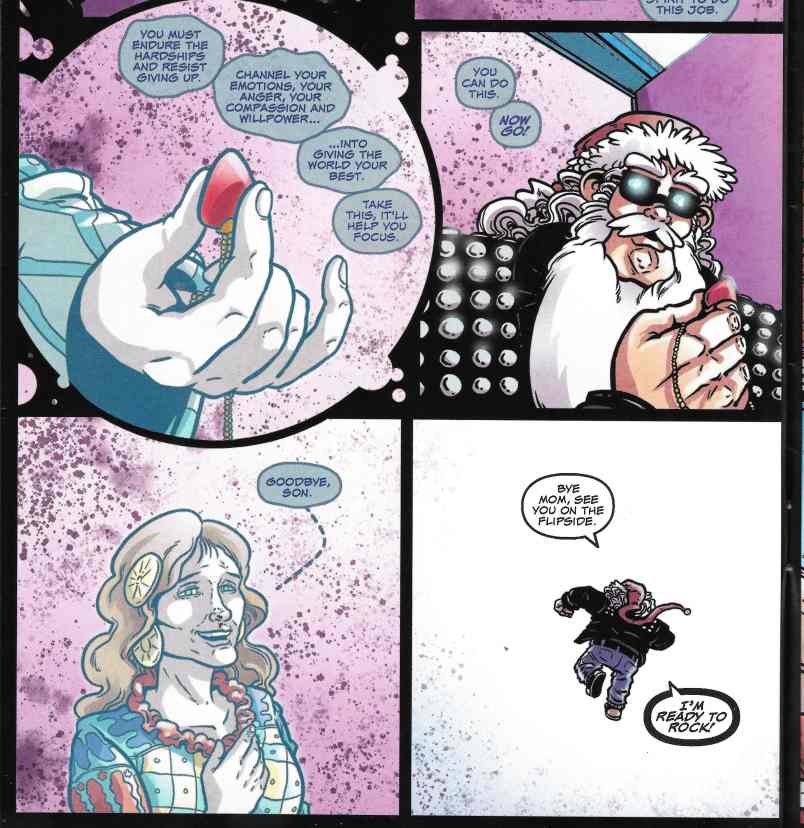 …and back into the real world. Santa doesn’t seem so rosey, however. In fact, he gives one brief pep-talk and then dies in Sleigher’s arms. 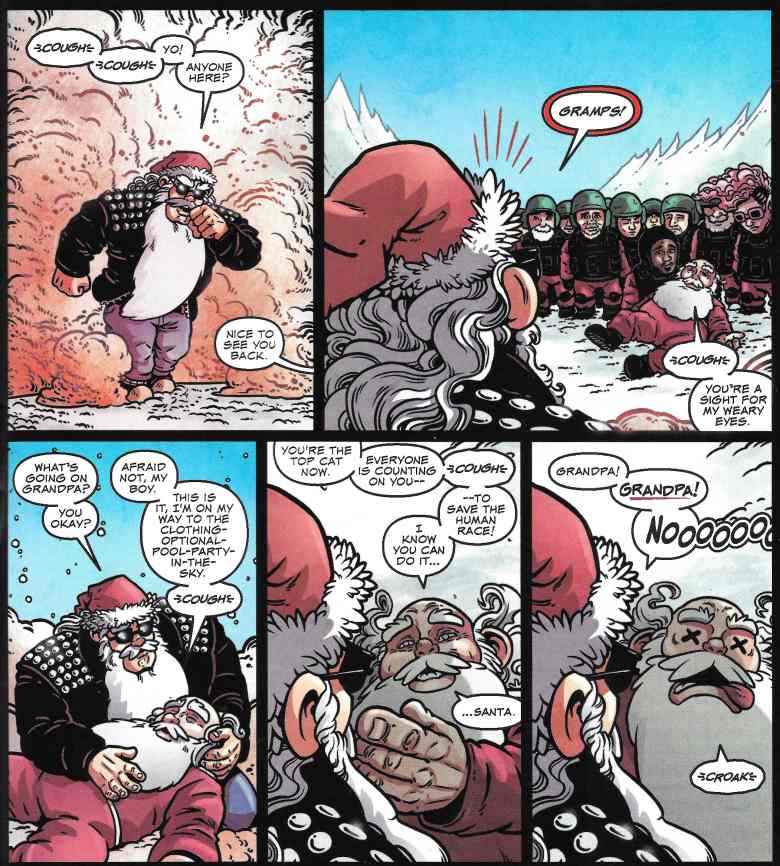 That pisses Sleigher off to no end, and we have out emotional build-up to next issue's climatic series-ending battle: Sleigher vs. Gryla. 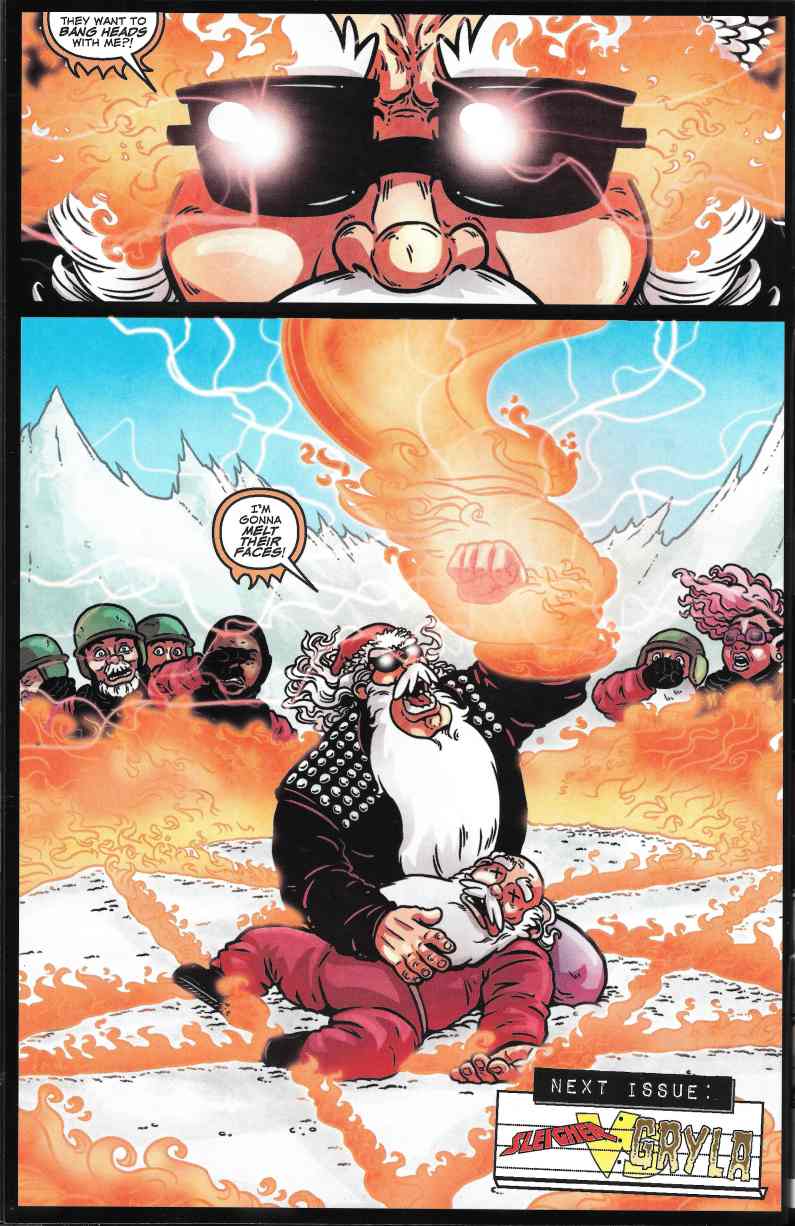 It’s not all bad, but it isn’t what I was hoping for. More ass-kicking and less setup. Simple things like leather-clad Santas hitting evil elves and demons make me smile. What can I say? I suppose what I should ask Santa for is any of the other four issues, since they probably have what I’m looking for.
Posted by SonOfCthulhu at 8:32 AM