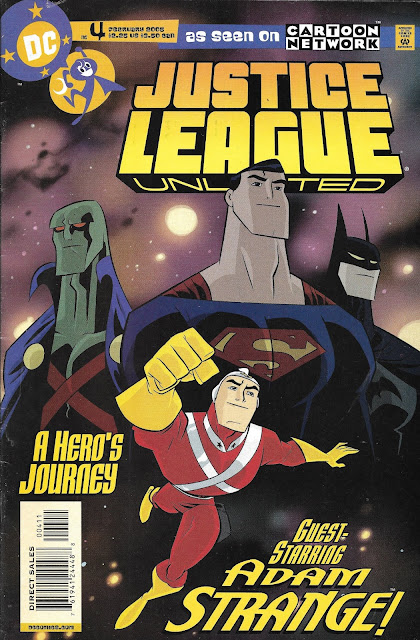 One of the best written Justice League books ever

Justice League Unlimited was the final series set in the long-running DC Animated Universe. The show lasted three seasons on Cartoon Network from 2004 to 2006, and while technically not a Saturday Morning Cartoon at first, plenty of stations later on down the line including The CW and Boomerang would run the show during Saturday morning slots. 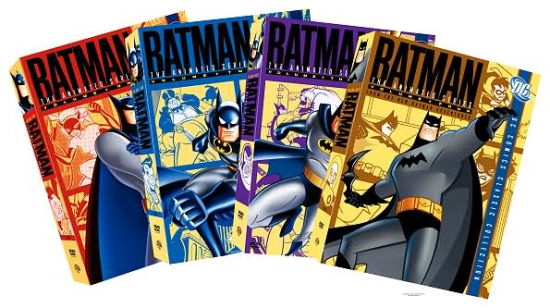 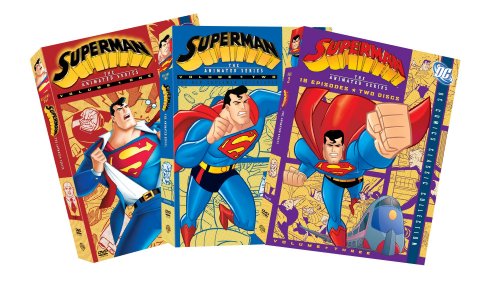 The DC Animated Universe, nicknamed the Timmverse by fans after the long involvement of Producer/Artist/sometime Director and show-runner Bruce Timm, began with the Fox Kids show Batman: The Animated Series. After several enormously successful seasons of both that show and its companion Superman: The Animated Series, Warner Bros. Animation pulled out all the stops with a new version of Justice League. Using some characters who had appeared in the prior two solo titles and some who had not, the initial group consisted of Superman, Batman, Wonder Woman, Flash, Hawkgirl, Martian Manhunter, and Green Lantern John Stewart. 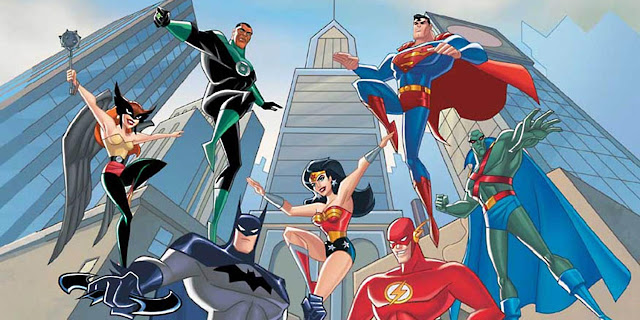 This core group would last for two seasons of amazingly tightly-plotted and character driven stories and produce some of the best original and adapted JLA stories that have ever been aired. Season two’s season finale “Starcrossed” was originally planned to be the final episode of the Timmverse, but Cartoon Network ordered the production of a successor series. Thus Justice League Unlimited was born. 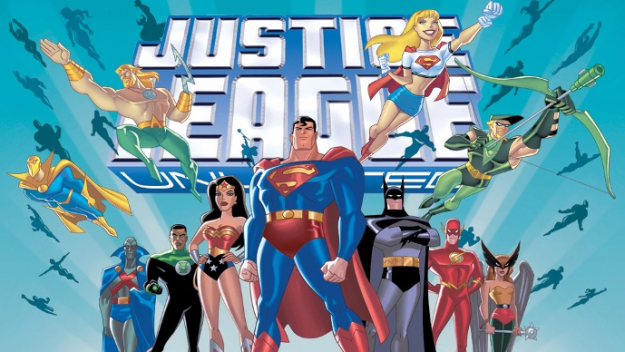 Taking the concepts of Justice League one step further, Unlimited featured heroes from across the DC Universe in adventures that expanded the role the Justice League played in defeating villains and protecting both the Earth and the galaxy. It was planned to end after two seasons but yet again Cartoon Network couldn’t get enough and ordered a third and final season.

Having grown up as a kid of The Superfriends tv show, Justice League and JLU were like the culmination of all my unfulfilled childhood dreams. I might not be the first to toss aside the rose-colored glasses when looking back at the stiff, reused animation and the hokey plots from Superfriends, but I will join their chorus as a kid of the 1970’s in stating “IT SUCKED!” Not to disparage the hard work animators and writers did on Superfriends, but the show pandered to youngsters in an age where these stories were seen as juvenile. There was a very blatant attempt to simplify story concepts down to a kid-friendly level. "Dumbing it down" would be an accurate term.

Villains had little-to-no motivation in Superfriends. Heroes had no disagreements or conflicts among themselves. The plots were amusement park rides that were so on a rail there was no chance of diverging into interesting territory. In short, they were awful, short-sighted, and do not hold up to viewing as an adult.

Justice League took all the complex plots and character motivation seen in Timm’s earlier shows and applied them liberally to a group of heroes struggling to come together as a team. It is a masterful series and one that I watched with ever-growing awe. When Unlimited came out, I was ecstatic. Many of my favorite superheroes were background characters like The Question, Booster Gold, Captain Atom, Captain Marvel, and Blue Beetle. If I couldn’t get a show dedicated to each one’s adventures at the very least JLU held the promise of a potential episode where each might get to shine for a bit. And in most cases, JLU delivered.

Without JLU we wouldn’t have the best adaption to date of Alan Moore’s “For the Man Who Has Everything.” The show gave us the hard luck story of Booster Gold in “The Greatest Story Never Told.” And as for season-long arcs, the show out-did Justice League by a mile. Shayera’s return, Batman’s budding romance with Wonder Woman, the Luthor-Brainiac team where Flash sacrifices everything to stop him, and the war against Darkseid were all jaw-droppingly executed.

It is odd that after developing such a high opinion of the animated series that I would approach a book like Justice League Unlimited with anything but an air of reverence. However, I’ve been burned by books before and this IS a tie-in to an animated TV series based off a book that sits several shelves down in the “adult” section of comic books. My “pandering-to-kids” alarm started going off immediately. Why else would this book exist?

Possibly to kick all those assumptions and my worries to the curb. I can’t tell you about the other issues in this run, but if they are anything like this story…Let me just state that if you are a Timmverse fan, you NEED to get these. This was hands-down my best experience reading a comic book in a long while.

The comic introduces Adam Strange to the Timmverese. Adam is the fish-out-of-water, normal man on an alien world spacefarer. Created by writer and editor Julius Schwartz and designed by Murphy Anderson, he first appeared in DC’s Showcase #17. Adam is an Earth archeologist who is exposed to a Zeta-Beam transport ray while on a dig in Peru. Just like that, he is whisked light-years away to the planet Rann, where he befriends scientist Sardath and falls in love with his daughter, the beautiful Alanna. Along the way, Strange would end up saving the planet from numerous alien invasions.

Owing to the wacky nature of the Zeta-Beam transfer, Adam would spend several years bouncing between the two planets as a sort of cosmic ping-pong ball. His adventures brought him to contact the Justice League from time-to-time, as they fought menaces together. His primary weapon was his intellect, although he also used a jet pack and ray gun when necessary.

Strange always came through. And that’s how we open this story, with Strange and classic JLA villain Kanjar Ro facing off. Kanjar Ro holds Superman hostage after having defeated the entire league contingent visiting Rann. All that stands between him and total victory is one savvy, determined Earthman. 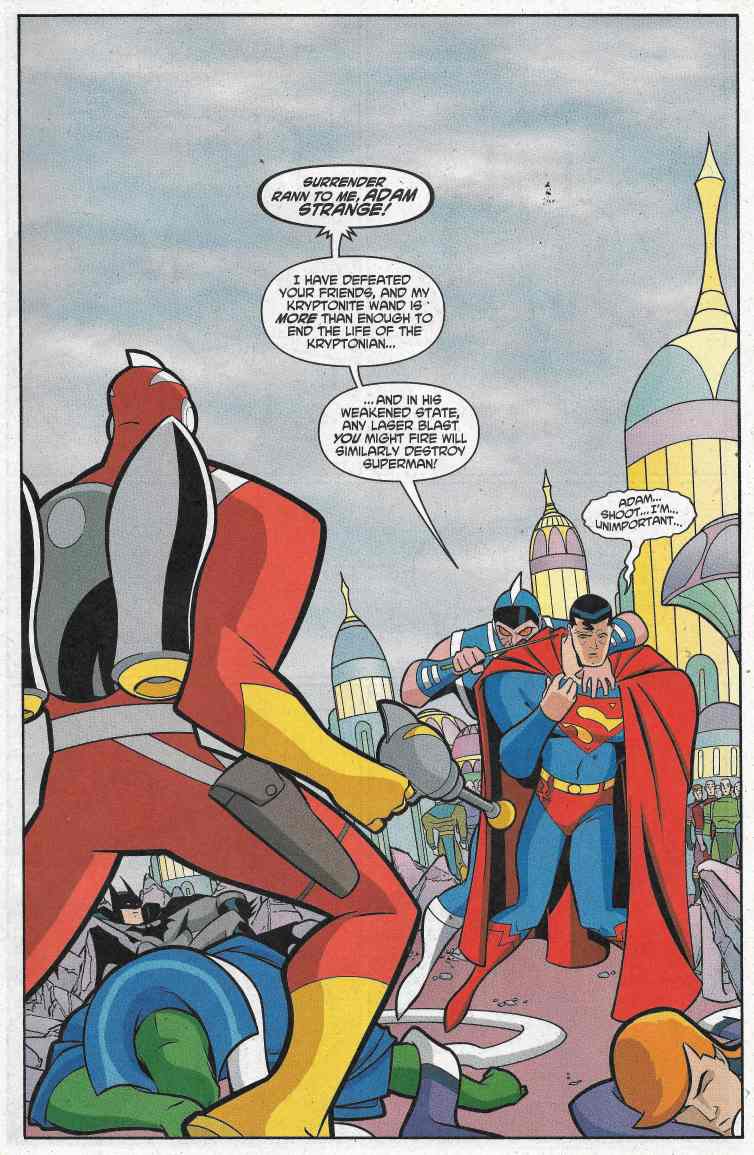 Strange knows Kanjar Ro is playing poker with a weak hand. He calls the alien’s bluff. 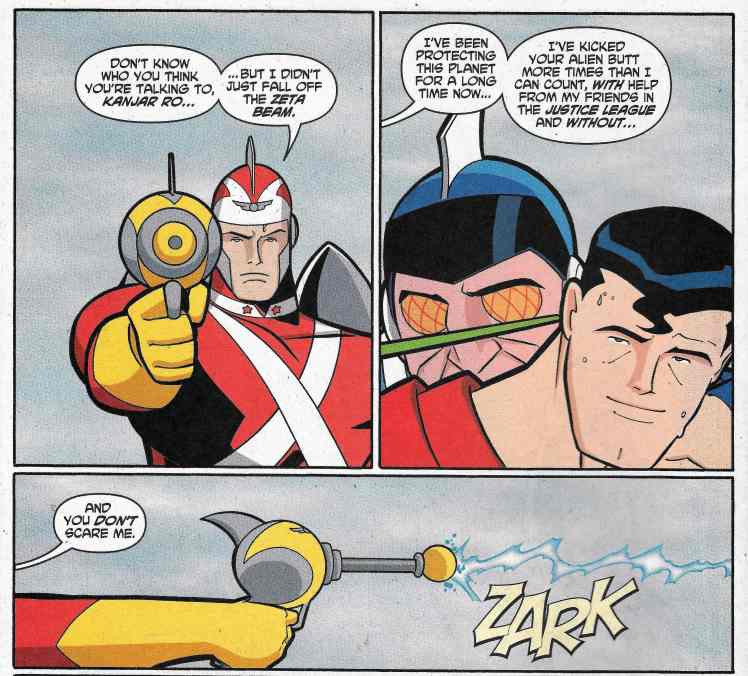 That blast toasts the alien’s wand weapon, reversing its effects immediately. Now Ro faces a full-strength Superman without any weapons. 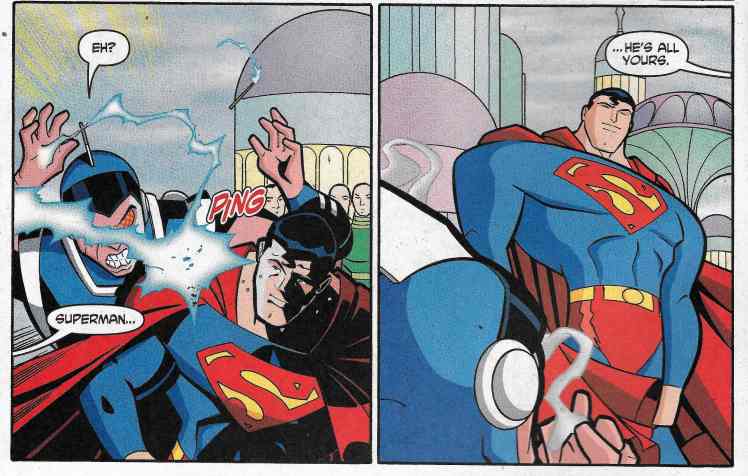 Since that battle is never in any doubt, the book skips ahead to a parade given by the Rannians in Adam Strange’s honor. We visit the victory celebration while piggy-backing in on the thoughts of Martian Manhunter. He runs down the list of things Strange CAN’T do… 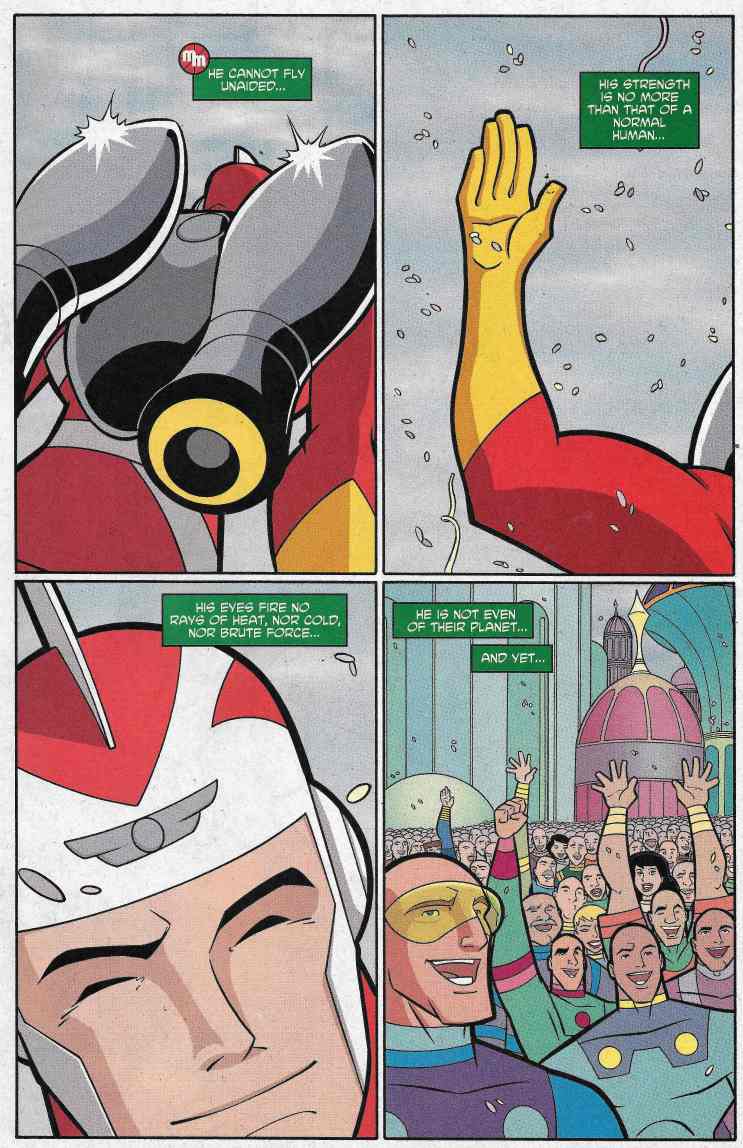 …to underscore the point that Adam, or anyone for that matter, can make a difference if only they have the courage to face their problems head on. It also shows that even though Adam isn’t from Rann, he is the world’s champion.

We get a roll call here and it seems we will be dealing with a “boy’s club” on this one. The Elongated Man is a surprise, but the other three heroes have been with the JLA since the first episode. Tossing in Adam makes for a nice mix. 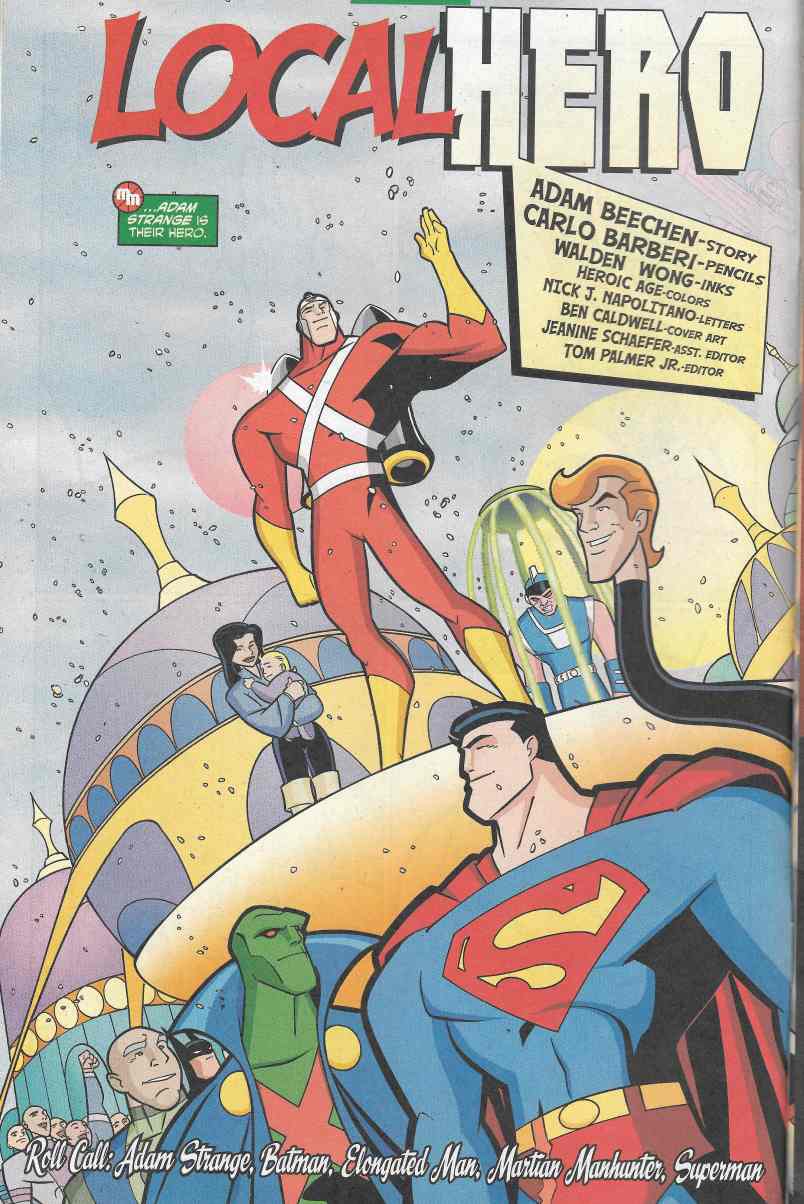 But what kind of story is this? It looks like the bad guy has already been caught.

Well, we aren’t done singing Adam’s praises yet. Also the readers of this issue didn’t have my lengthy intro to guide them in figuring out who Adam Strange is and how he became the Hero of Rann. 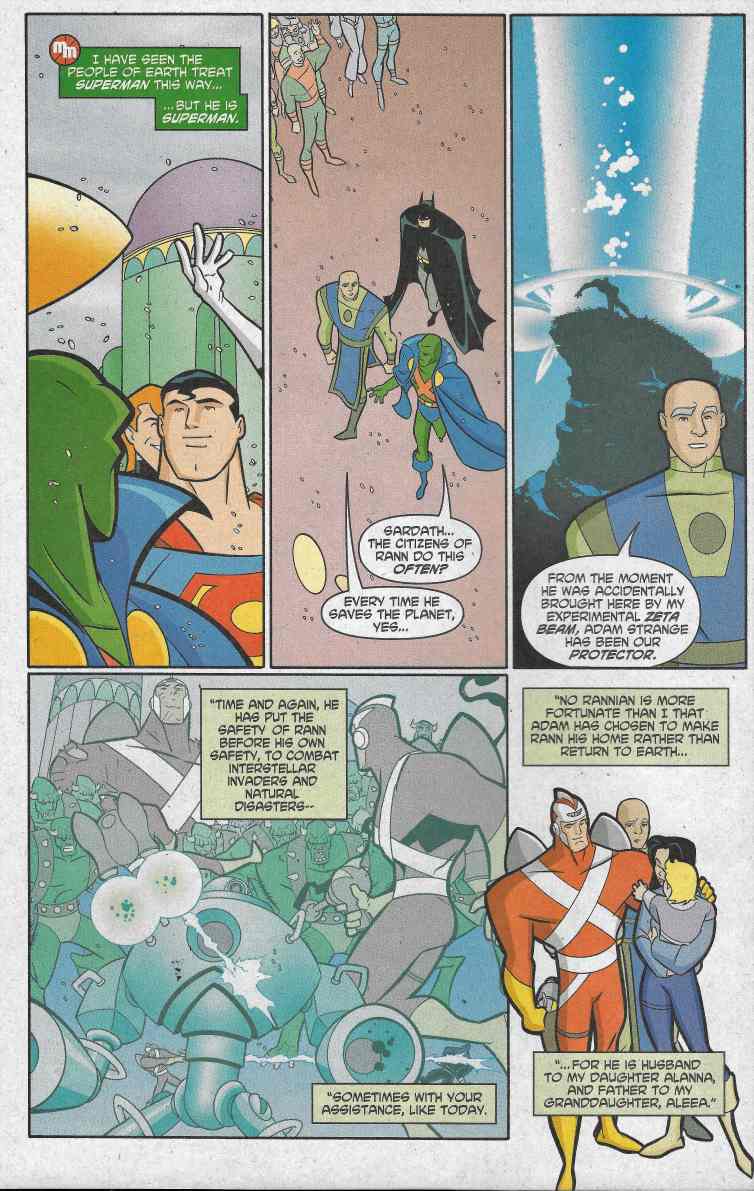 But all of this leads J’onn into speculating where are Rann’s home-grown heroes? A question that from the looks of the severe young man in the middle of the bottom panel might soon be answered. 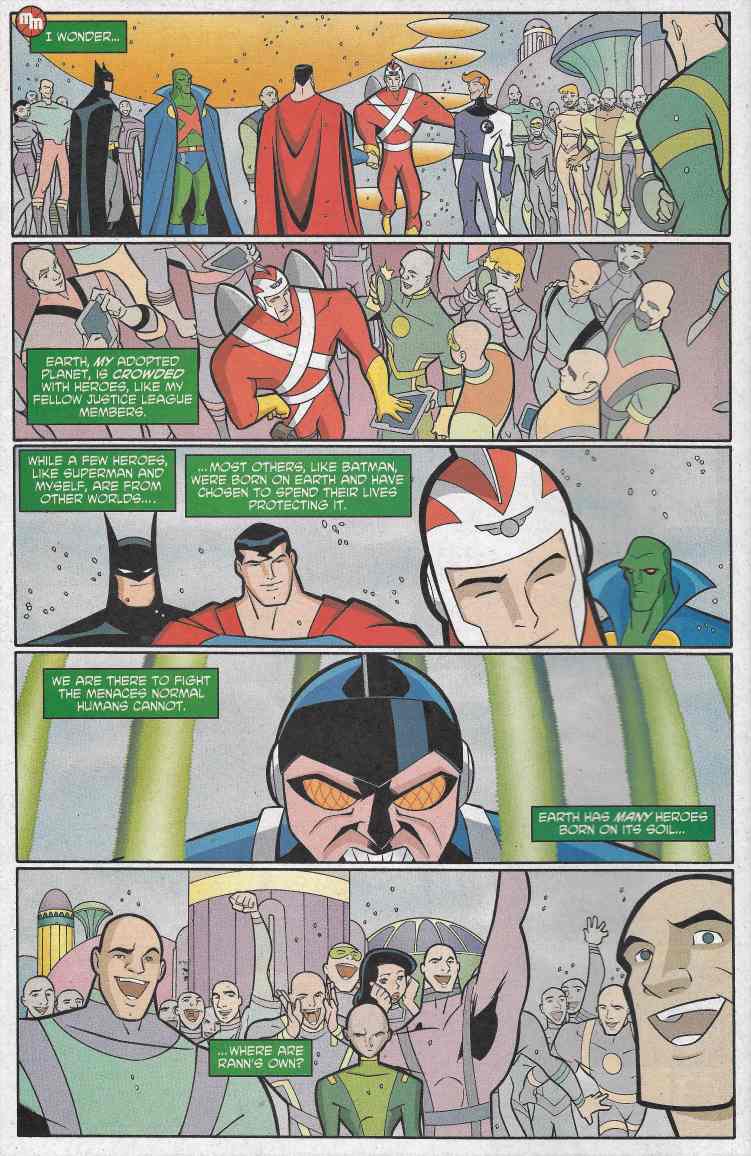 …and it appears he is not content to begin building himself up without tearing down Adam Strange’s legacy first. 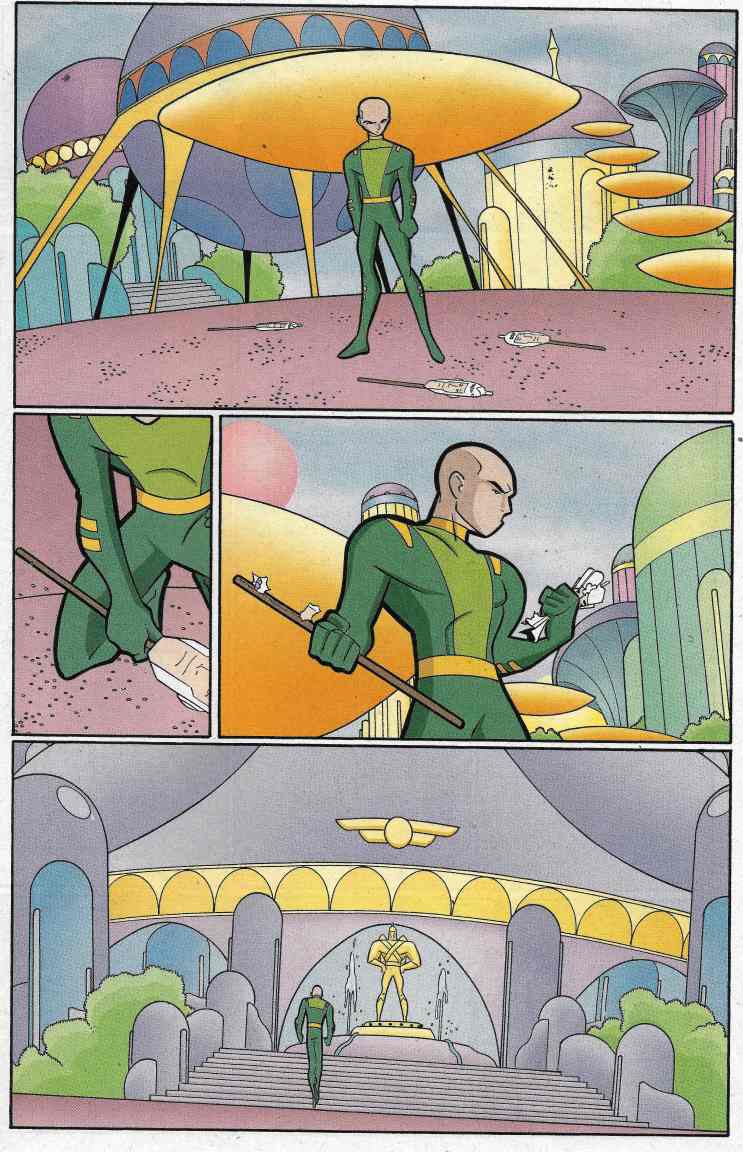 These next scenes made me wonder if we were watching the birth of a brand new supervillain. Because it is very clear that our youth has stolen Kanjar Ro’s backup wand weapon and he seems intent on breaking into Ro’s jail cell. 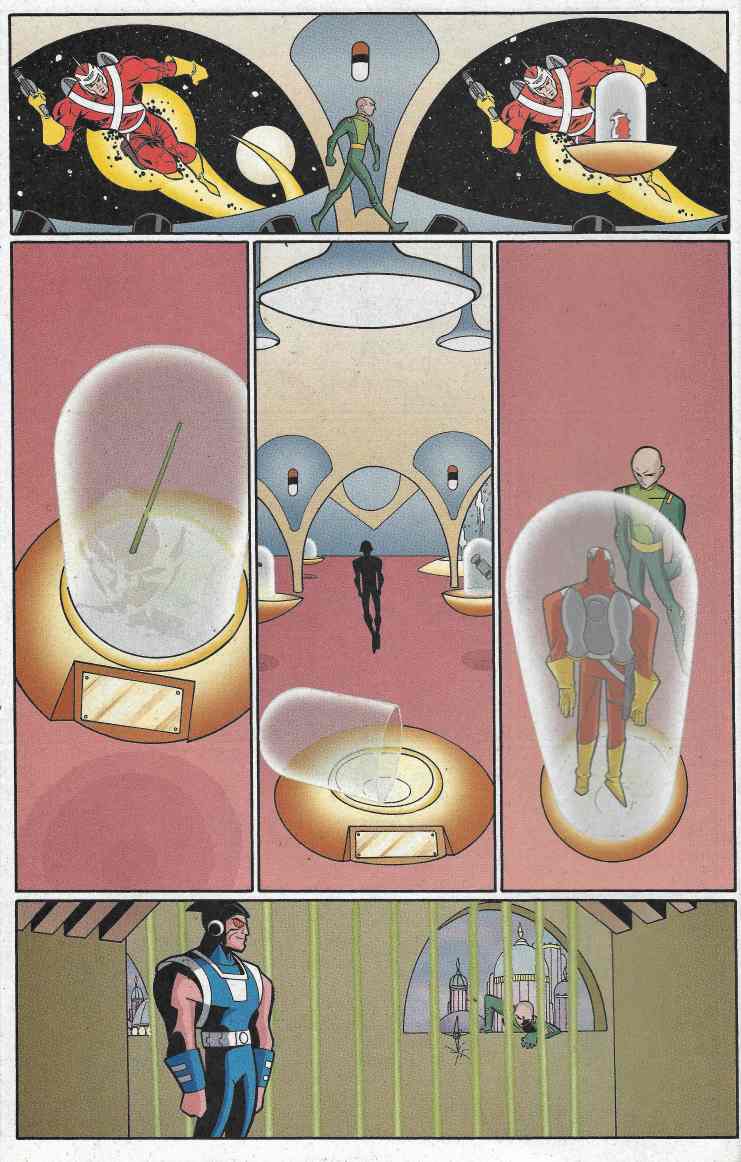 Turning back to the Justice League comrades, all of J’onn’s musings during the day have lead to him asking a very pertinent question: Does Adam ever feel homesick for Earth? 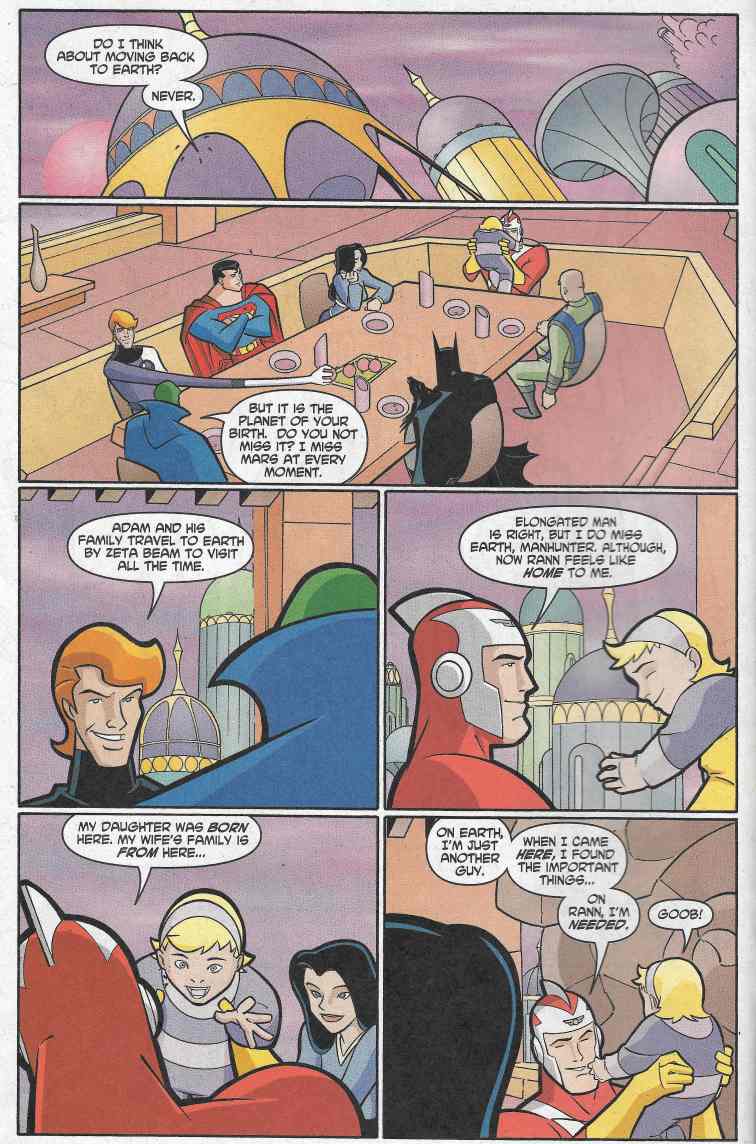 Adam’s answer sums up his feelings about Earth and Rann. Certainly he misses his home planet, but Rann is his home now too. With so much talk about where Adam is from and his relationship to the people of Rann, I found this tale super-super focused.

So when our young rapscallion reappears late that evening, broadcasting his feelings on having Adam Strange constantly defending his planet from peril, it really resonates that this is what we have been building to all along. But Salaan isn’t a villain. He earnestly wants to be the hero Rann needs, even though it already has one right now. He’s got a bound Kanjar Ro with him too. This prompts J’onn into action before Kanjar can turn the tables on this situation to his advantage… 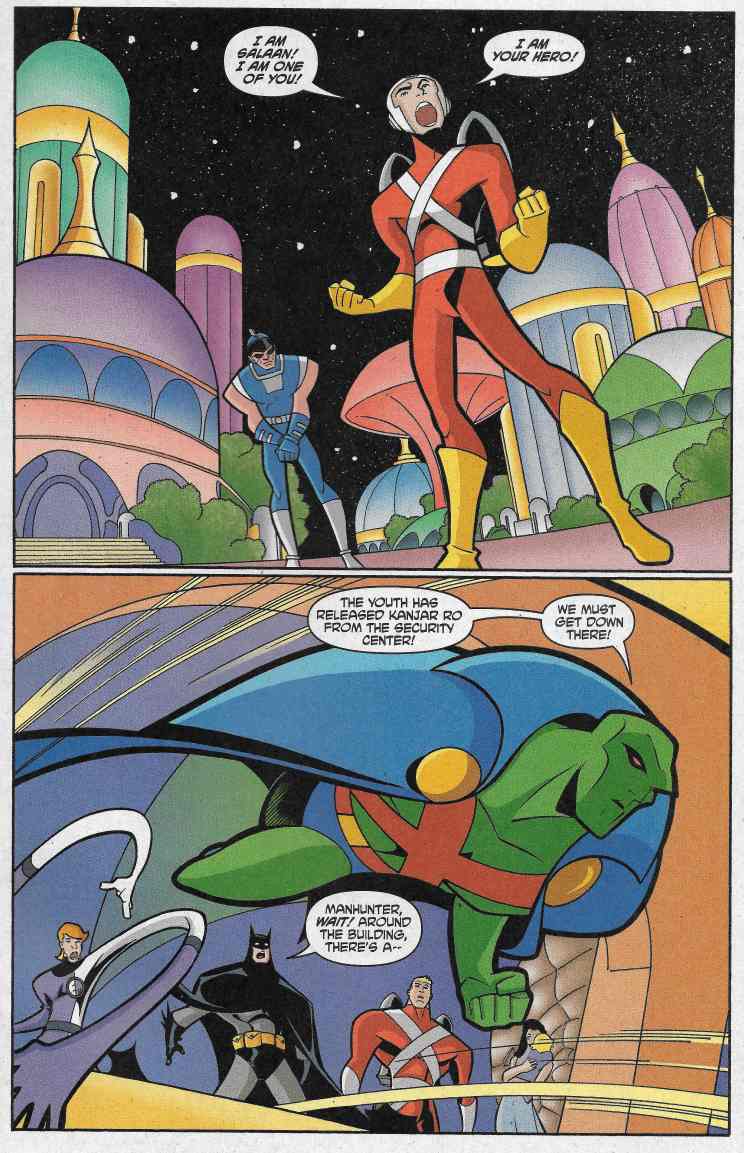 …unfortunately, Salaan has prepared for that eventuality. And he cooked up a surprise for Superman as well. As Adam clearly notes, some of Salaan’s decisions make less sense. 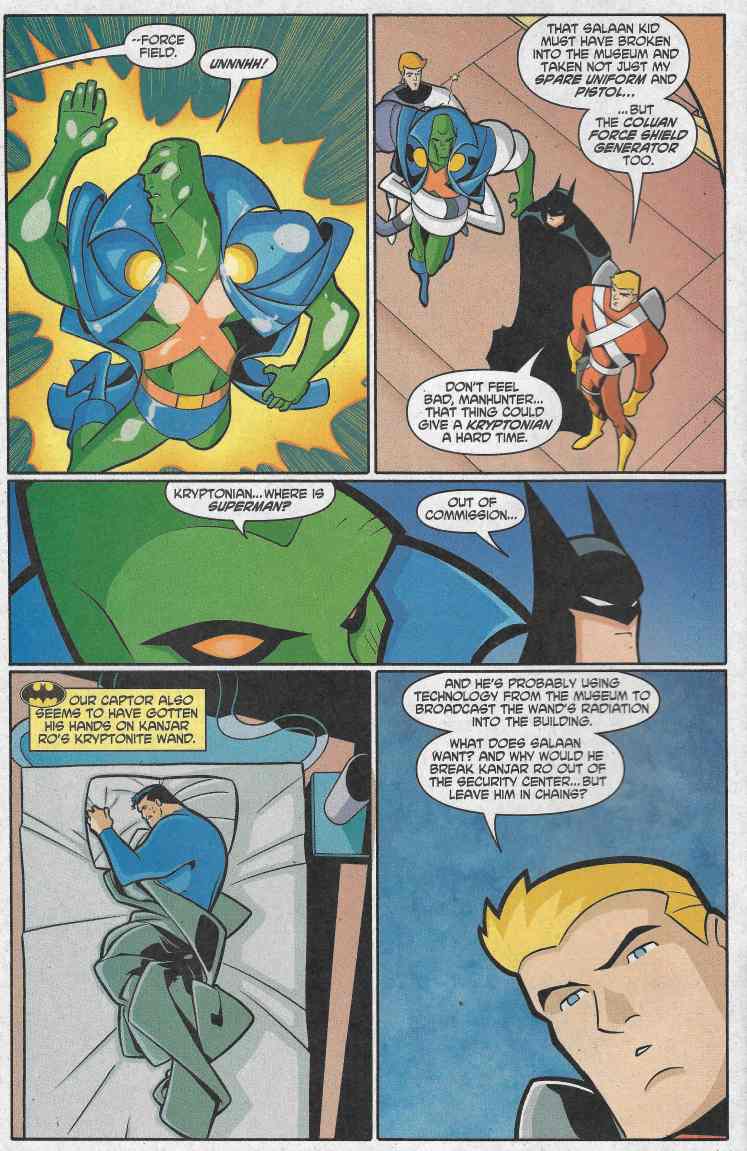 Like his decision to let Kanjar Ro go so that he can prove worthy of being Rann’s new champion by recapturing the alien criminal. Alone. 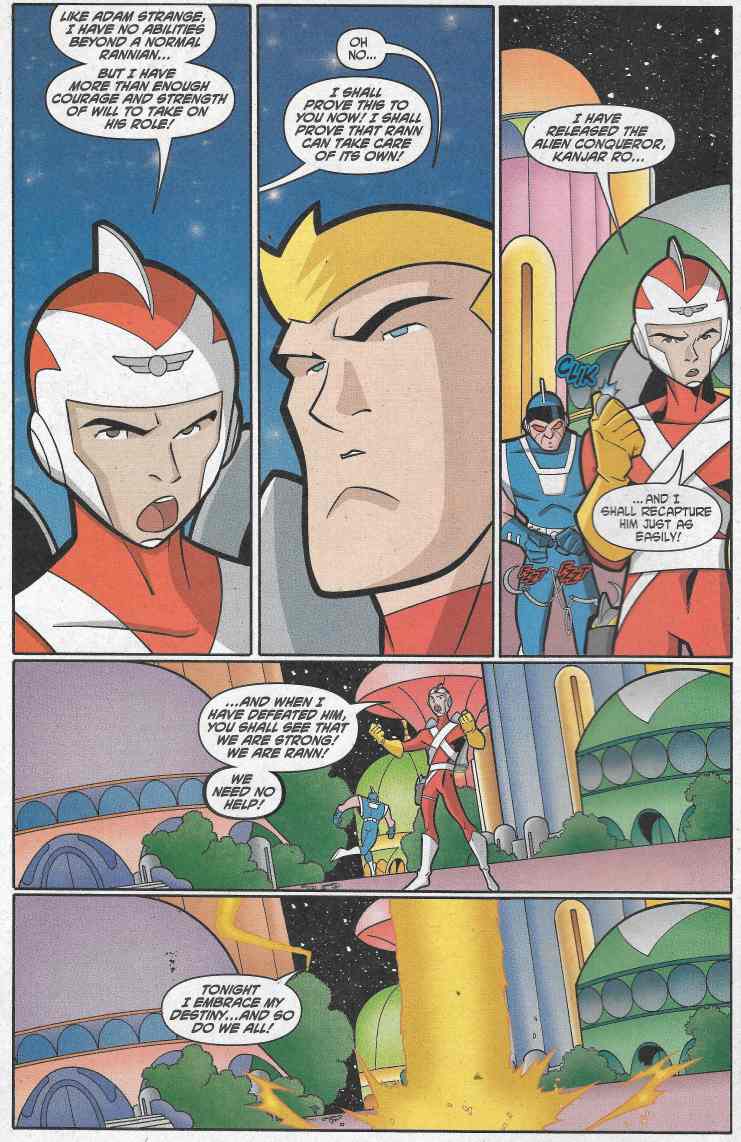 While the Justice League appears helpless to stop him, Adam doesn’t give in so easily. Cobbling together a gadget to effect their release while at the same time explaining why Salaam is unlikely to recapture Kanjar, Strange shows us what a true hero is. 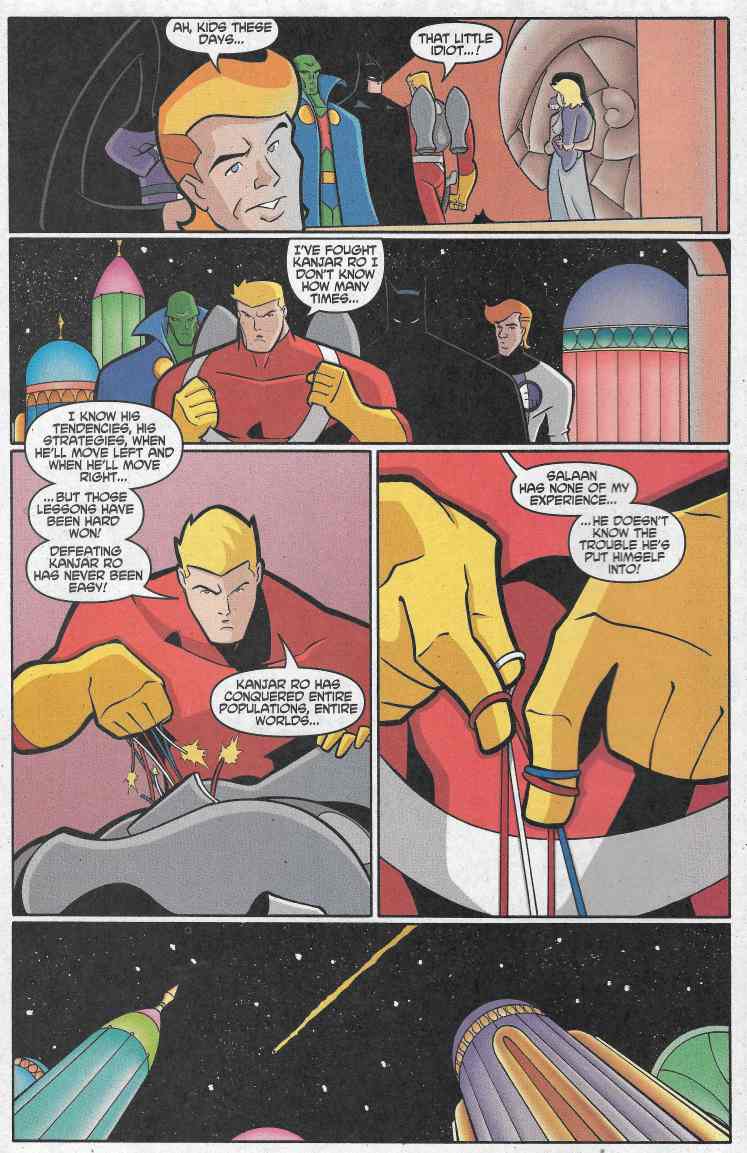 By the time Kanjar Ro has lured Salaam into a trap using Rannian citizens as bait, Strange and the Justice League are able to short circuit the dome keeping them prisoner. 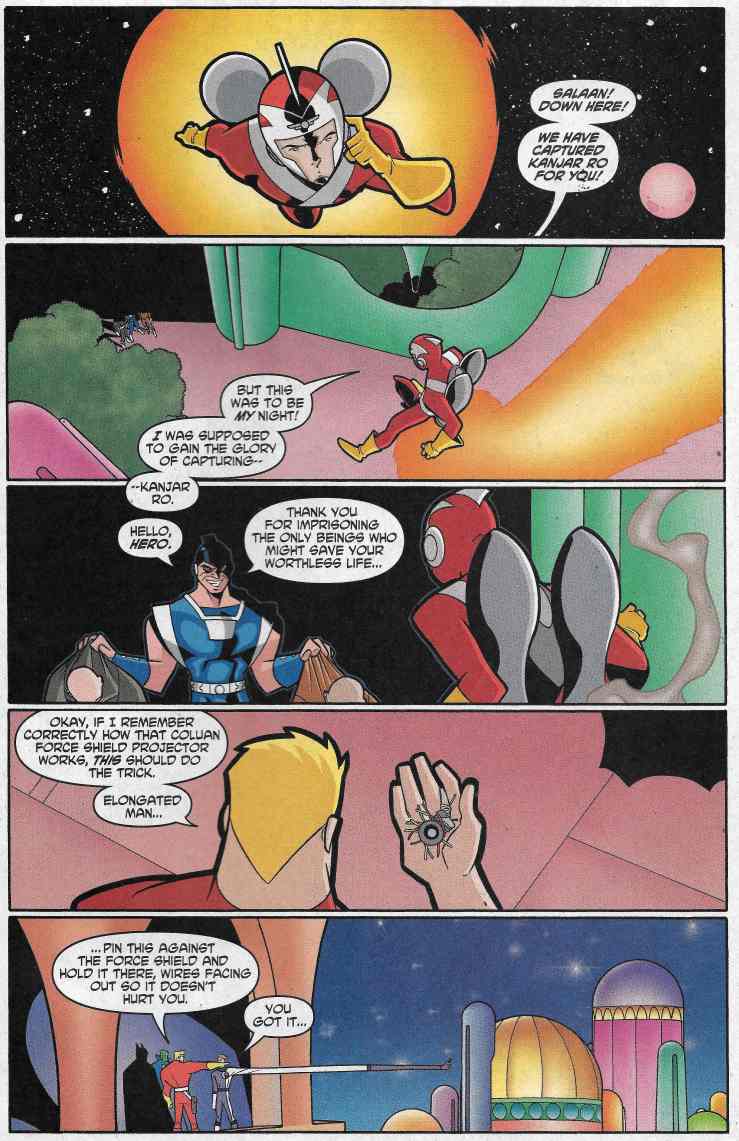 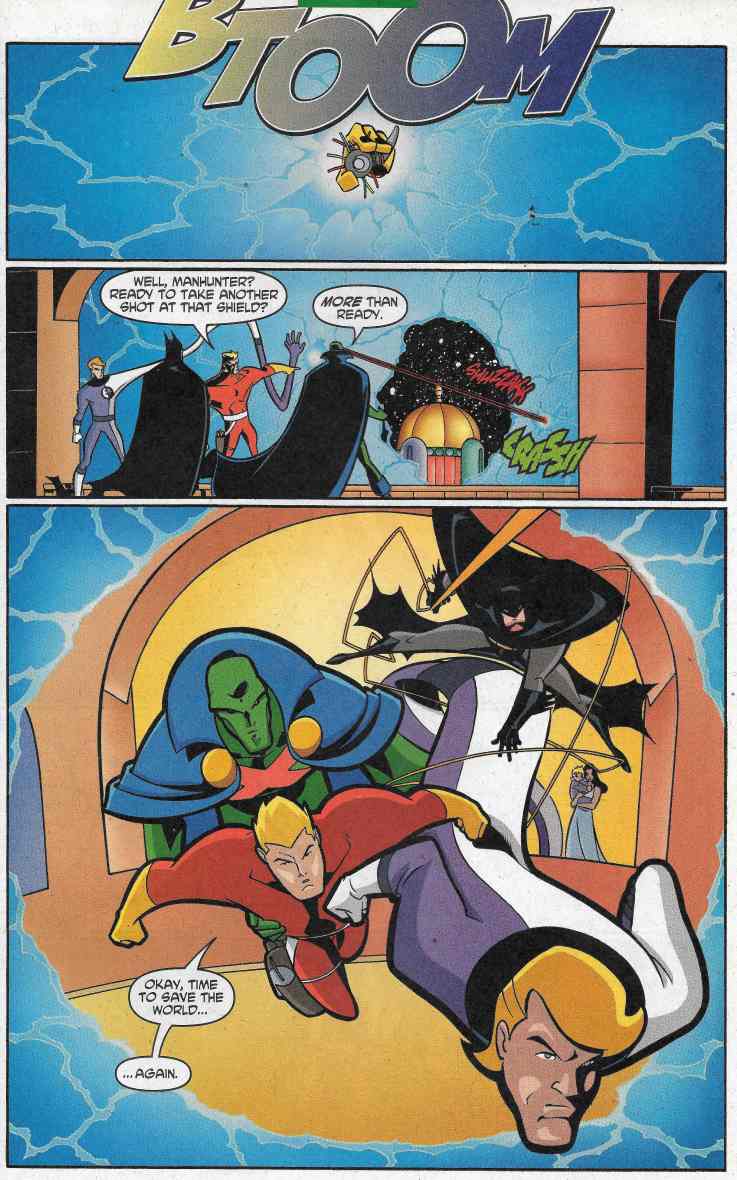 Which is very fortunate for Salaam because Kanjar Ro is no pushover. He has the boy’s weapon and jet pack in no time at all. Some kind of hero Salaam turned out to be. Looks like in a moment the kind he’ll be is “a dead one.” 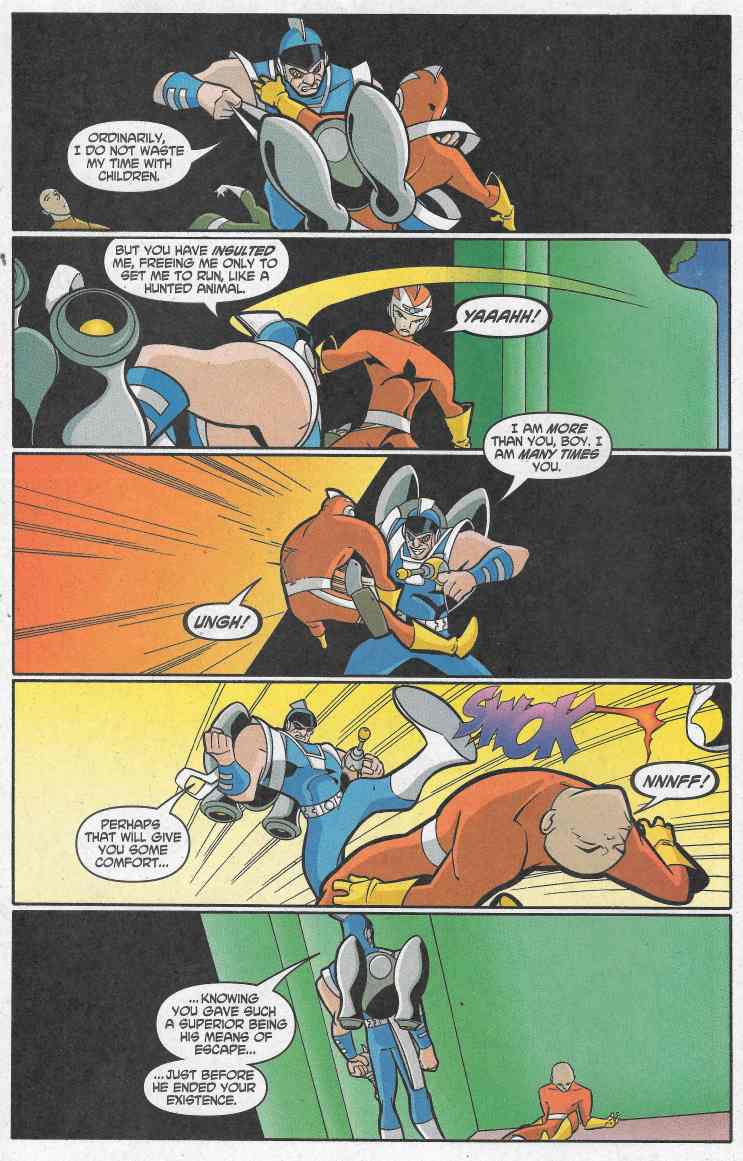 Except for the sudden appearance of these folks, who handily disarm the alien menace. 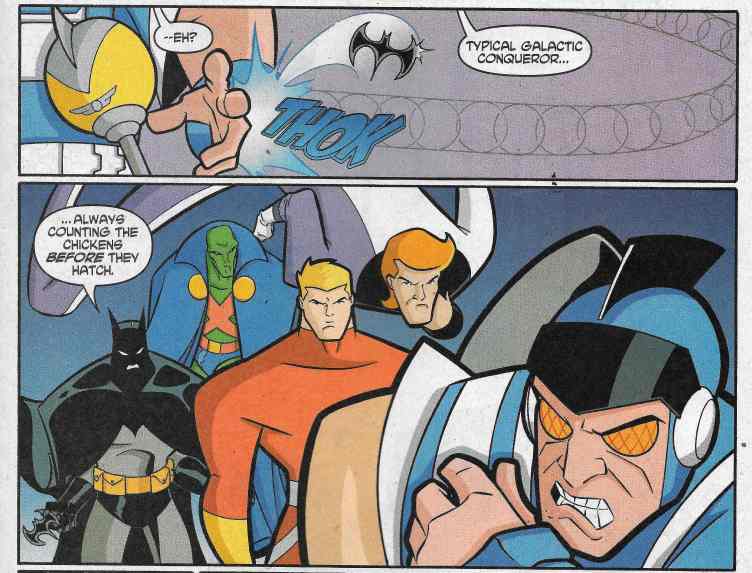 Sadly, Kanjar Ro still has the jet pack and he uses it to make his escape. Or at least, he attempts to. While the Elongated Man is unable to halt his ascent, Martian Manhunter provides an adequate goalie, keeping Kanjar from roaming too far afield. 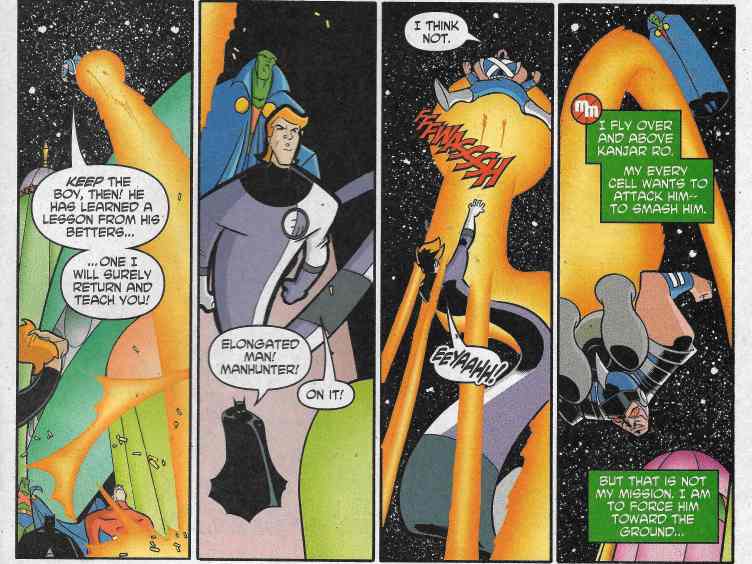 Which proves to be a bit of a mistake. Love the chickens hatching joke coming back around, and the fact that Kanjar Ro makes for a credible threat in this issue. 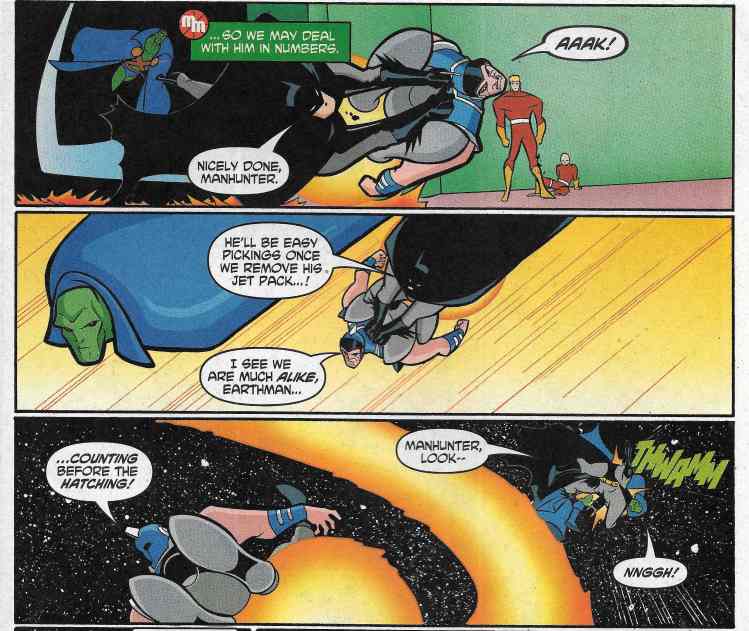 With the rest of the League dispatched, it is up to Adam Strange to stop Kanjar, and that’s when the story’s magic twist happens. 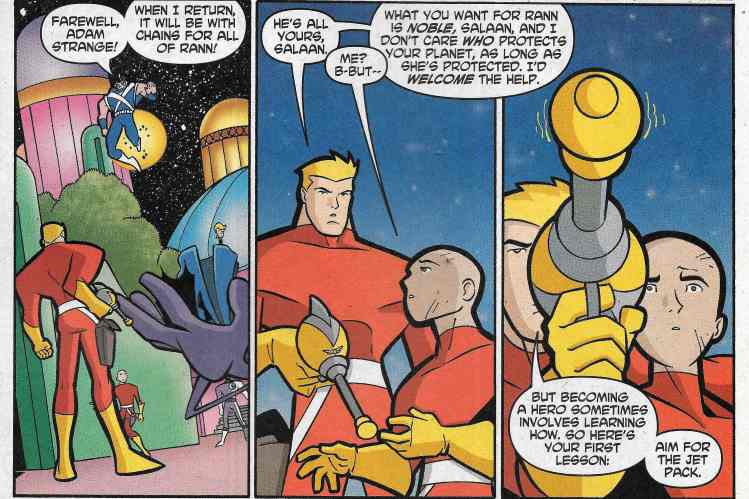 I’m so, SO in love with this. Adam is such a true hero and part of his makeup is selflessness. It doesn’t matter who stops Kanjar as long as he is stopped. Adam isn’t in the for the ego boost. His words to Salaam bring such joy to my heart. 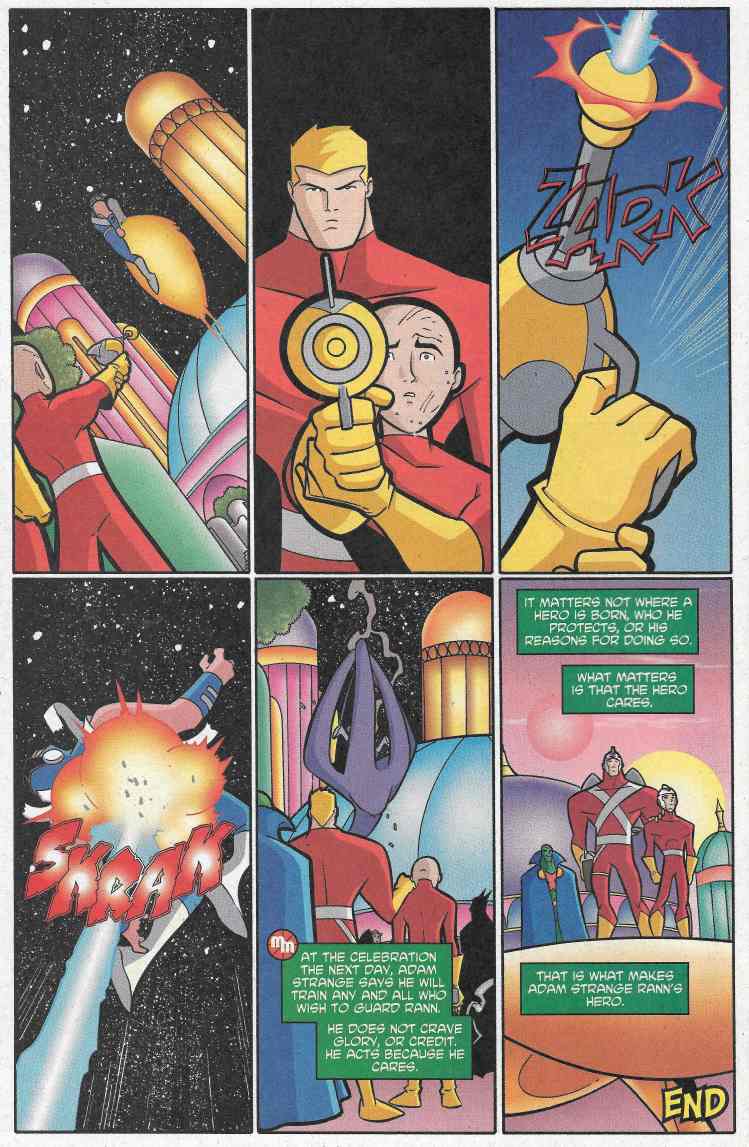 And of course Kanjar is stopped. Salaam shares the spotlight with the Justice League and Adam Strange helps train the Rannians who want to assist him in protecting the planet from menaces.

Such a great story. It highlights the humility and altruism that makes a hero more than an average man. This story reminded me of what we should aspire to. It brought me a strange sense of hope, and that is a magical thing for a story to do.

There were forty-six issues of Justice League Unlimited and due to the strength of this one story, those have now become insta-pulls for my bin dives. Adam Beachen does the story here and on twenty six others in the run, so it looks like I won’t be disappointed with many of my finds. The next issue after this one was a Blue Beetle introduction. Let’s hope I can find that one fast.
Posted by SonOfCthulhu at 2:10 AM