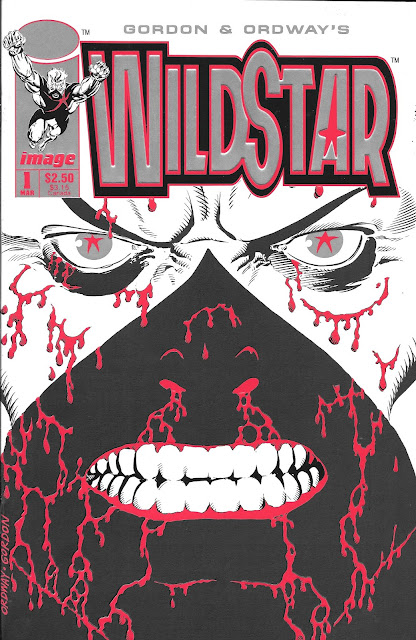 I love success stories. Unfortunately every hero in the Forgotten Heroes section will ultimately end up NOT being a success story. Otherwise how did they get forgotten?

WildStar: Sky Zero IS a success story in my opinion. Created by two of the best artists in the business: Alan Gordon and Jerry Ordway, WildStar the hero bucked the odds. Mainly because we had two artists creating and writing a superhero character for Image in the early 1990’s and that title did not suck. (I’m giving Savage Dragon a pass here and staring solely at Spawn and every book that Rob Liefeld put out around Image’s inception).

That slam may be a bit harsh. Ordway had previously been involved in writing the Superman titles for DC for several years. But, that was after an extended time co-plotting adventures with the likes of John Byrne and Marv Wolfman on the Superman titles which cultivated great writing habits. Ordway has the chops to write and draw, but both are skills that have to be honed.

However, Ordway isn’t at the helm of this baby. Not unless that co-creator label includes a bit of plot assistance. Instead we have Alan Gordon pulling out his smith-corona and hammering it out. And again we have someone who worked as a co-plotter for a while to learn the writing craft, this time with Keith Giffen on Legion of Super Heroes. Oh, and Gordon took over writing duties of that title from issues 21 -24 in 1991.

What I’m saying with this intro is that I’m gun-shy of artists taking over the position of writer on a book. The moment I see it I get flop-sweats. Red Flags pop up when I come across one of these. Not just from the small press, no-name independents either.

As Todd McFarlane’s Spider-Man series taught me: an artist may not make a good writer. Both are skills that have to be learned and many do not take the time or effort to properly understand how they are different. Also there is a matter of talent in crafting a story. Some writer/artists naturally have it. And some do not.

Lucky for us, Gordon does. Or in this instance perhaps Gordon linked with Ordway is the key. Whatever it is, it doesn’t matter because there’s a good story lurking underneath this book.

And the art is literally jaw-droppingly good. I’m a child of the 70’s and 80’s comic book panels. I love lots of action in little bitty boxes. I’ve long been a fan of Ordway’s pencils and I love me some Gordon inking. Add up all these elements and you end up with a book I thoroughly enjoy. Let’s go see if you enjoy it too?

We start our story on the run and inside WildStar’s head. He mentions how his life for the past 25 years has been nothing but violence and battle, possibly caused by “the symbiote.” We’ll learn more about that in a moment, but right now we have an action scene to make it through right after WildStar comes upon this...whatever it is. 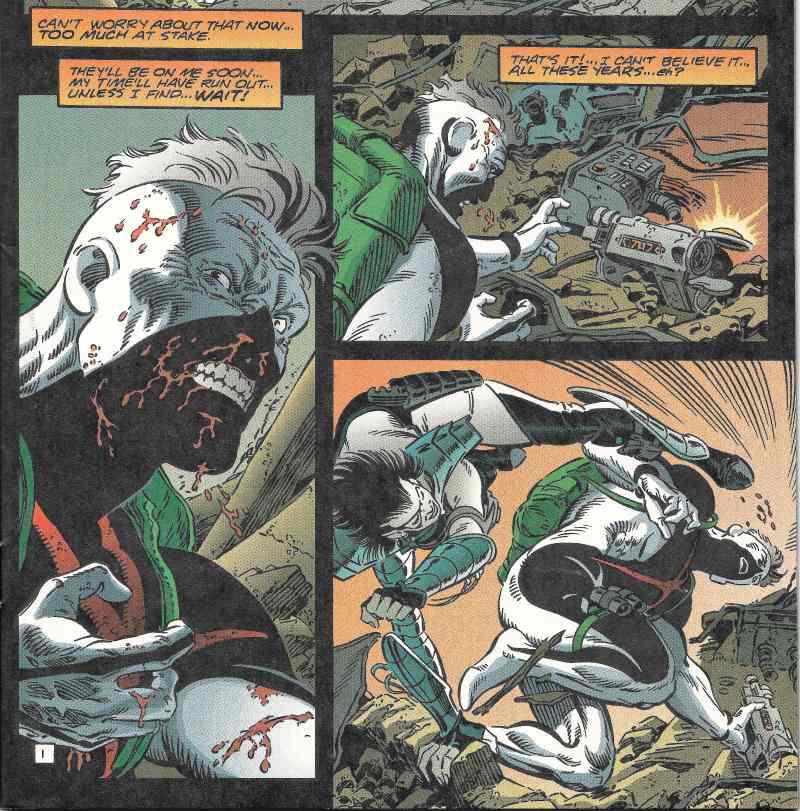 Here’s the odd thing about this opening: I like it. As you will see, this is just a long, drawn out battle just like most of the Image titles of the time. It is action for action’s sake, something that ordinarily comes off as dull and dumb. The fact that Gordon and Ordway can make this interesting is either my goodwill from years of Superman books or some trick at how Gordon is introducing the character.

No time to analyze this now, though. Ordway is cooking up a good fight scene.

Although with it being “nine-on-one,” I wouldn’t exactly call it a fair fight. And “Michael” or WildStar appears to be down for the count. He’s collected the piece from the rubble that he was looking for and it appears these latecomers were looking for it too.

This one, who I find hard to look in the eyes for some reason, is named Jumpstart. She tries to take him by herself and even in his weakened state, WildStar tosses her aside. 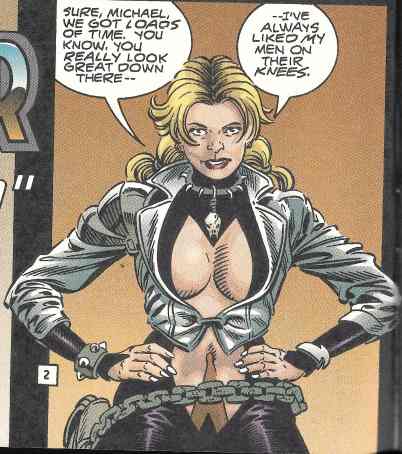 Various pieces of that costume are defying gravity. Sadly.

WildStar’s had enough of running it appears. After tossing Jumpstart aside, he goes after this guy, who will remain nameless… 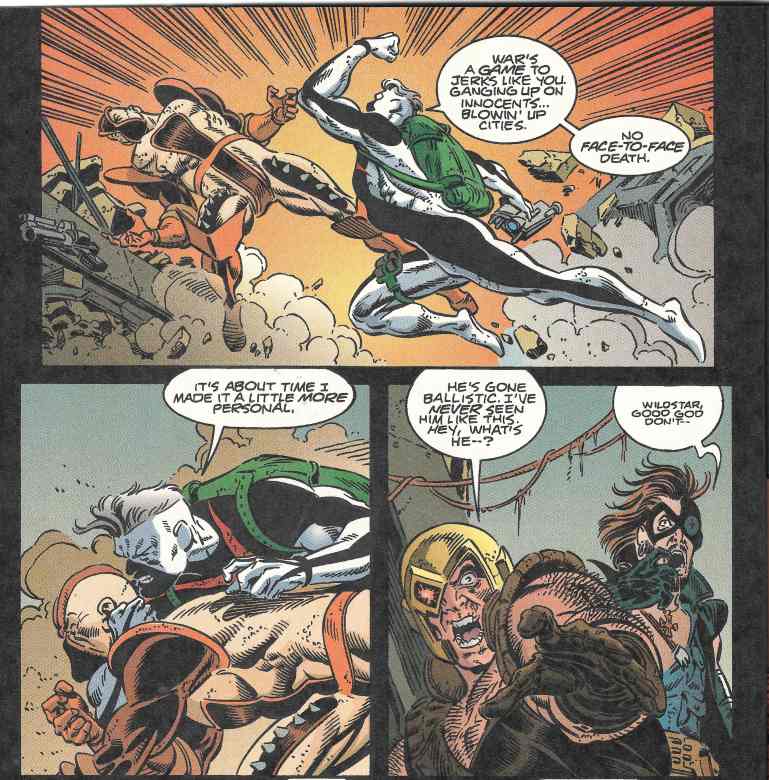 …forever. Because dead men don’t get names and WildStar rips the old alien tech mask off his face only for us to find that the mask IS HIS FACE NOW. 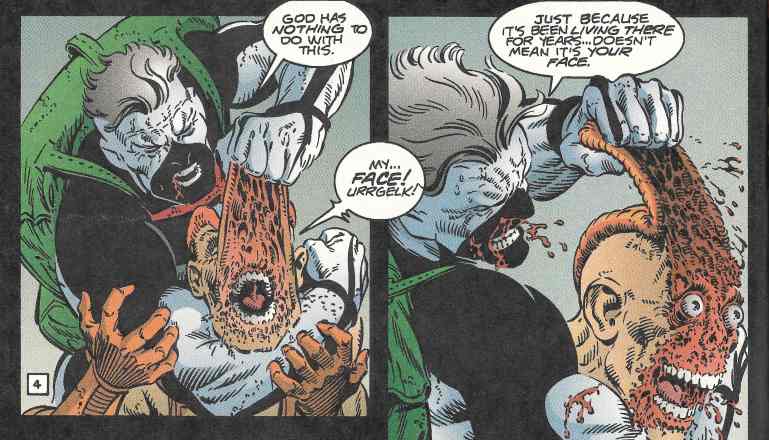 Worse yet, the mask is a symbiote that is alive and starts crawling away. The creature looks like a cross between a used band-aid and a centipede. 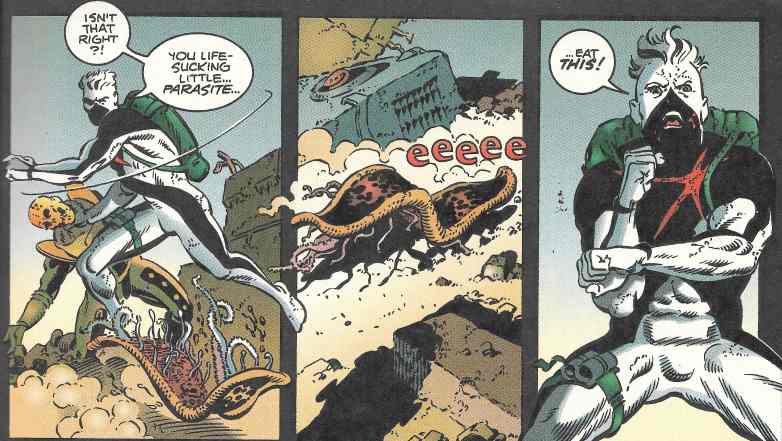 Nothing to worry about though. WildStar takes care of it with a force blast. Unfortunately, that power drains him momentarily. 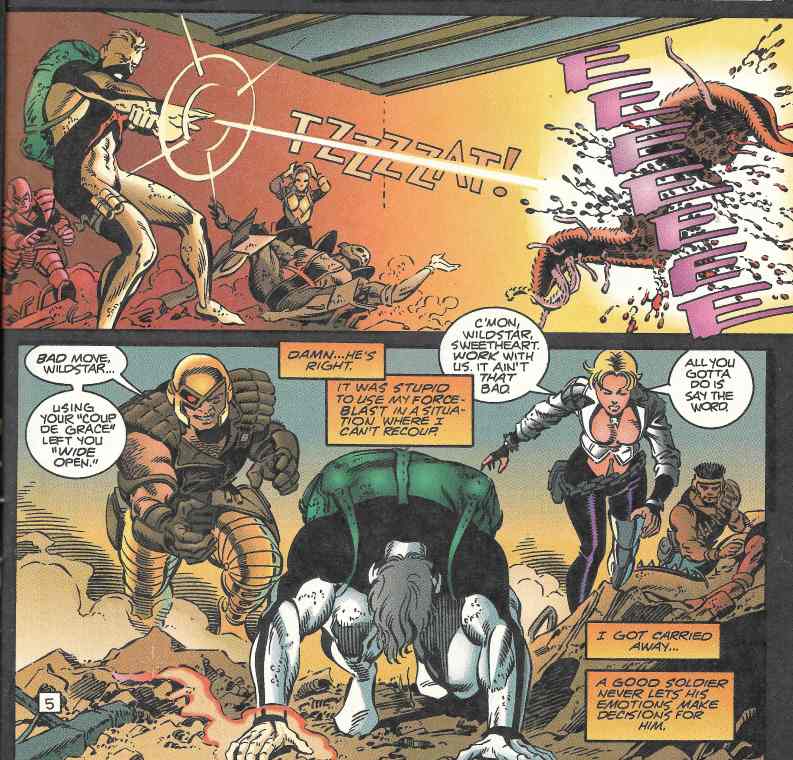 Let’s recap what we know: 1.) there are disgusting alien symbiote-things that attach to people, 2.) the symbiotes apparently give people superpowers, 3.) WildStar has superpowers and a giant red starfish shape on his chest. 4.) Ewwww!

Seriously though, this is kind of a cool concept for a superhero. It gives them a disability (disgusting!) and a weakness (removal = death) all rolled into the explanation of how they got their powers. I like where Gordon and Ordway are going with this. The story is cleanly setup in five pages: anti-hero fighting to keep some “time-MacGuffin" away from various superpowered bad guys for unknown, but surely nefarious reasons. Neat character concept, clear plotting, and I cannot complain about the distinctiveness of the art. They’ve got this one sewn up.

Why do I call WildStar an anti-hero? Well, maybe it’s things like ripping off a guys face to kill him or… 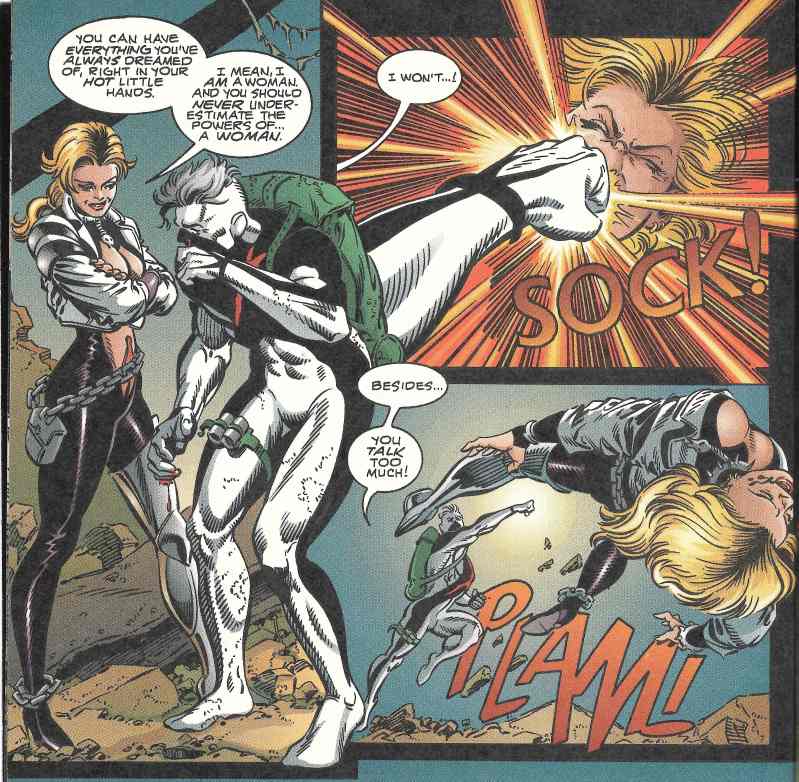 …using subterfuge to punch a woman in the face who is trying to sway you to her side instead of, I don’t know, just saying no way. These tend to point in the direction of a hero who isn’t afraid to play dirty.

Oh, and that punch sets up a second mystery: Who is this teammate she gets punched into whose name is apparently “Hot Wire?” There clearly needs to be more time developing these villains. 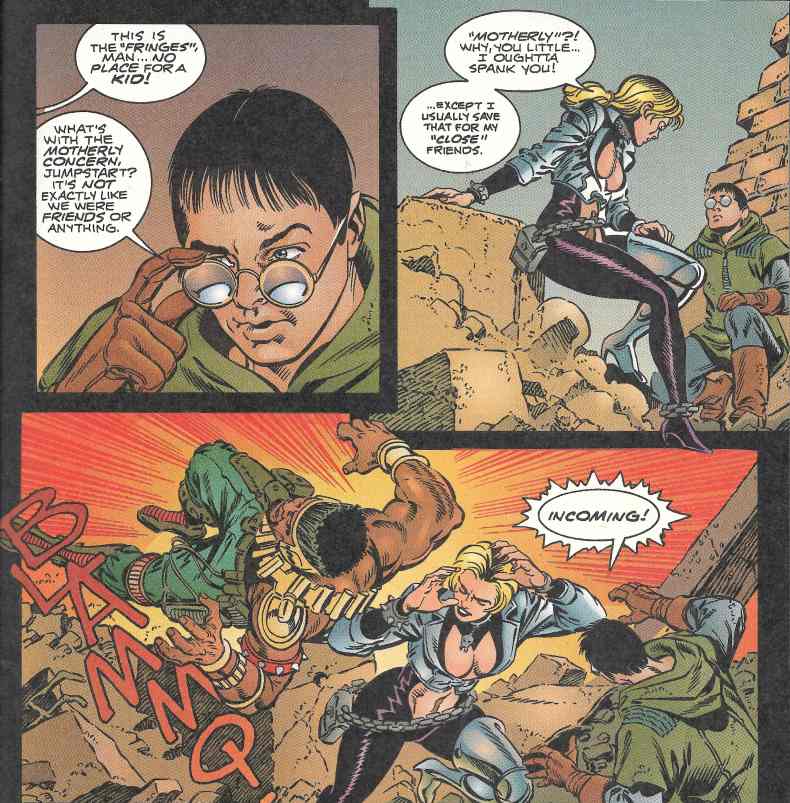 While, Jumpstart is dealing with the young upstart and Mazer almost flying into both of them, we turn back to WildStar protecting his find against the helmeted DeadStar. His symbiote doesn’t appear to pack near the punch of WildStar’s, a problem that DeadStar works to correct on the battlefield. 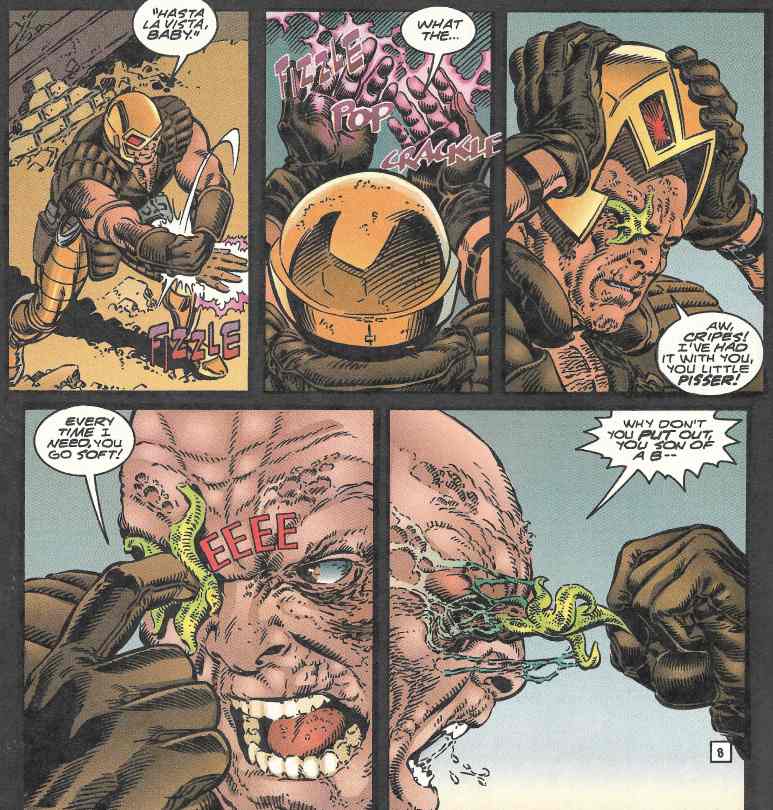 I don’t have to tell any of you Starship Troopers fans about how taking your helmet off in life fire combat will work out, do I? Especially not up against an enemy like WildStar, who can take all comers it appears. 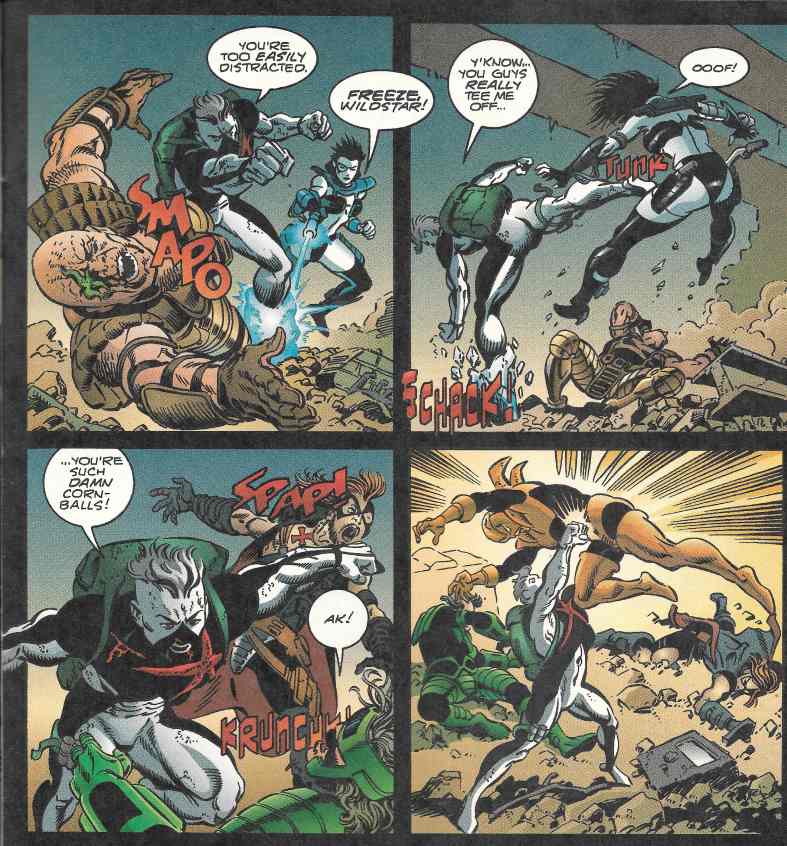 WildStar gets a chance to toss an electronic enhancer on, unnoticed by his assailants, and fiddles a piece of the time-thingamajig out too. Then DeadStar gets the drop on him. As the one-eyed vandal draws down, JumpStart tries to reason with him…and offer WildStar a chance to join the other side in this conflict. 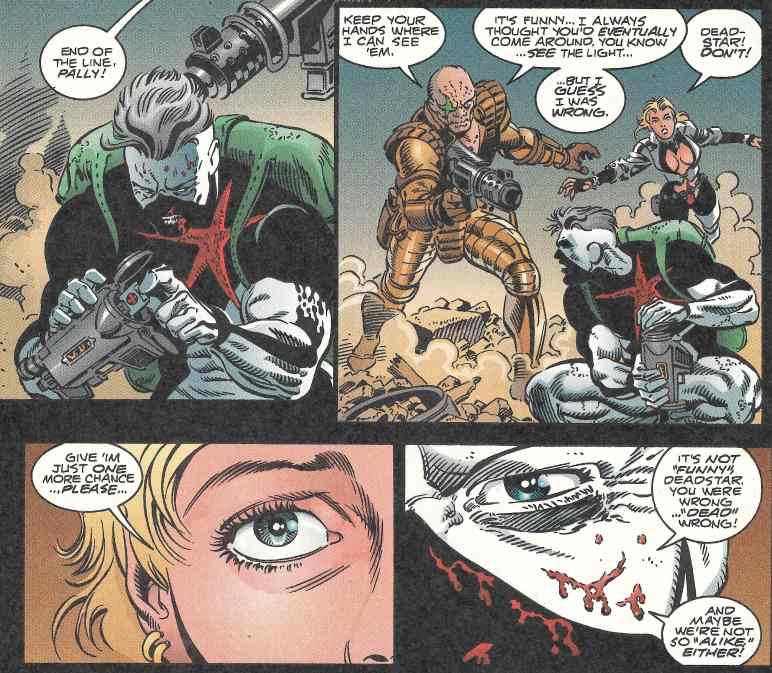 Which he declines, so DeadStar blasts him. JumpStart is quite upset over this. 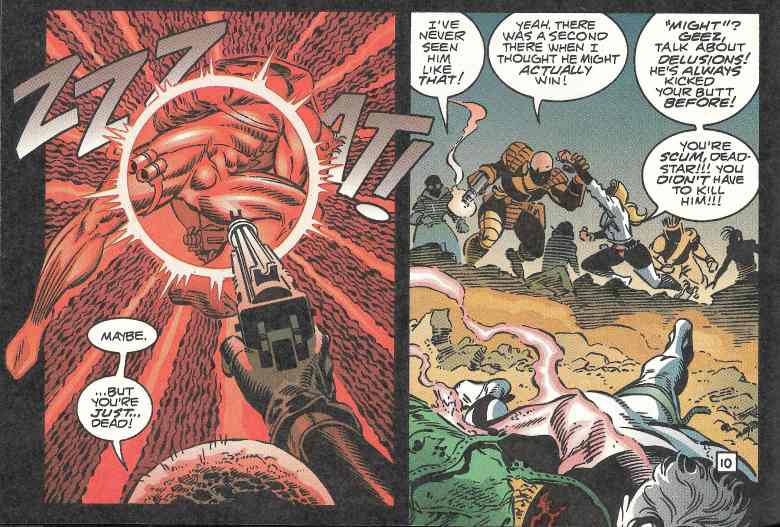 WildStar pops up moments later unharmed although having what appears to be hallucinations... 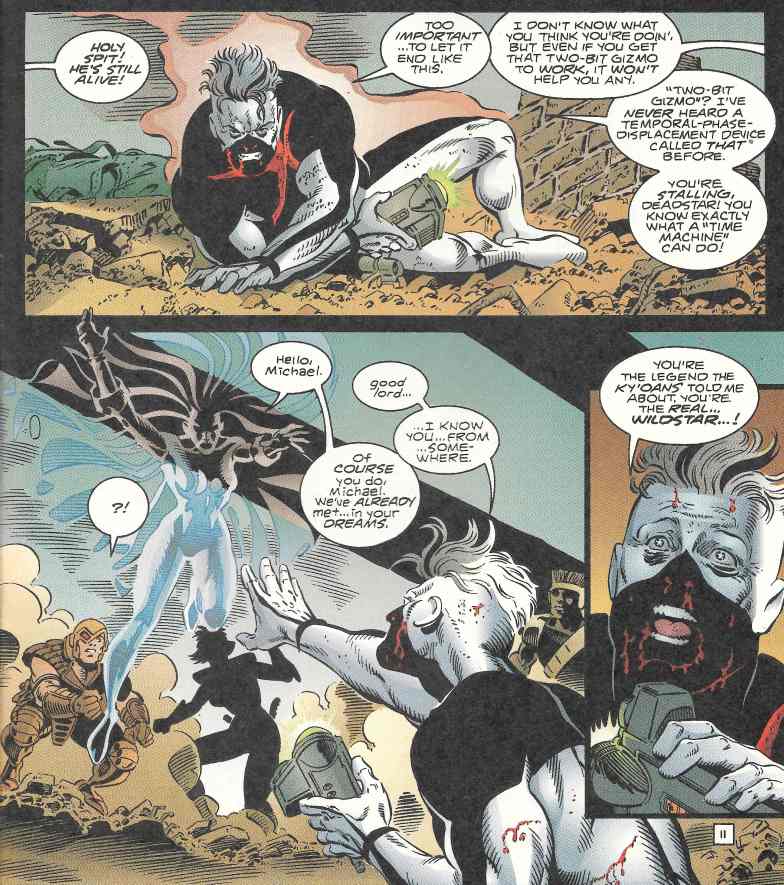 The phantom tells Michael/WildStar that he is the legend and that he’s been “repeating himself,” which tied in with the time gizmo sounds like a paradoxical time loop is getting created to my untrained ears. 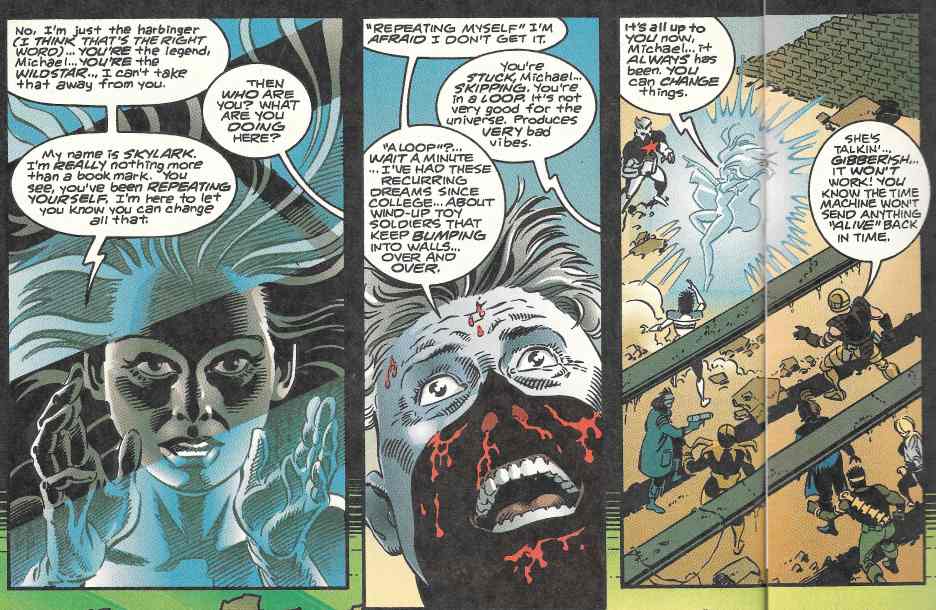 WildStar seems to get that impression too and uses the Time thingamajig to send himself back into the past, leaving his attackers there to quibble over just what happened. In a stunningly dumb move, he explains HOW he can send live matter back in time before leaving, an action he will later regret I feel. In a puff of green-light whatever, WildStar is gone and we take up the story of “Micky,” a young lad visiting his Dad’s lab in present day America. 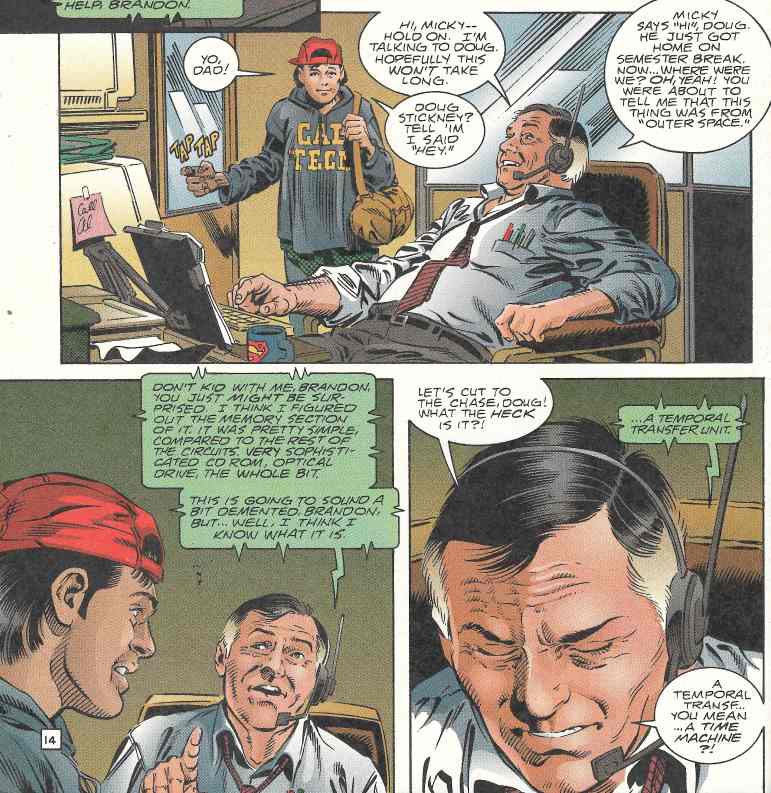 While his Dad chats up a colleague about an alien time machine, an unexpected Earthquake damages the building. 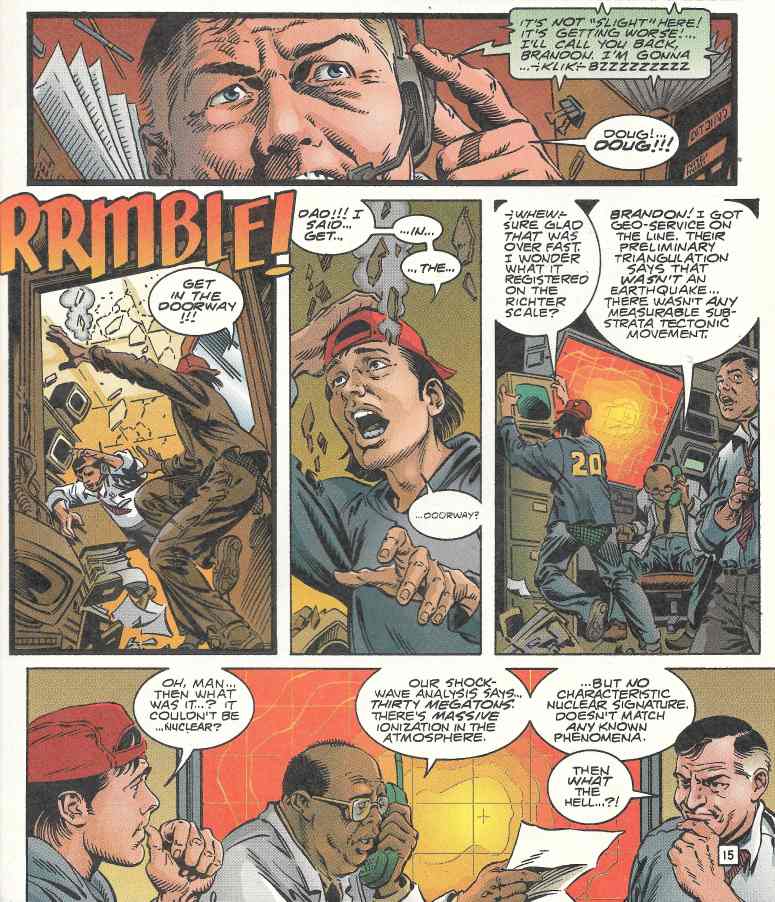 But the Earthquake isn’t caused by anything natural or nuclear detonation or fraking or whatever. The epicenter appears to have been nearby and with the chance of possible casualties, the scientific team decides to investigate…at the behest of the President…with “Micky” in tow. 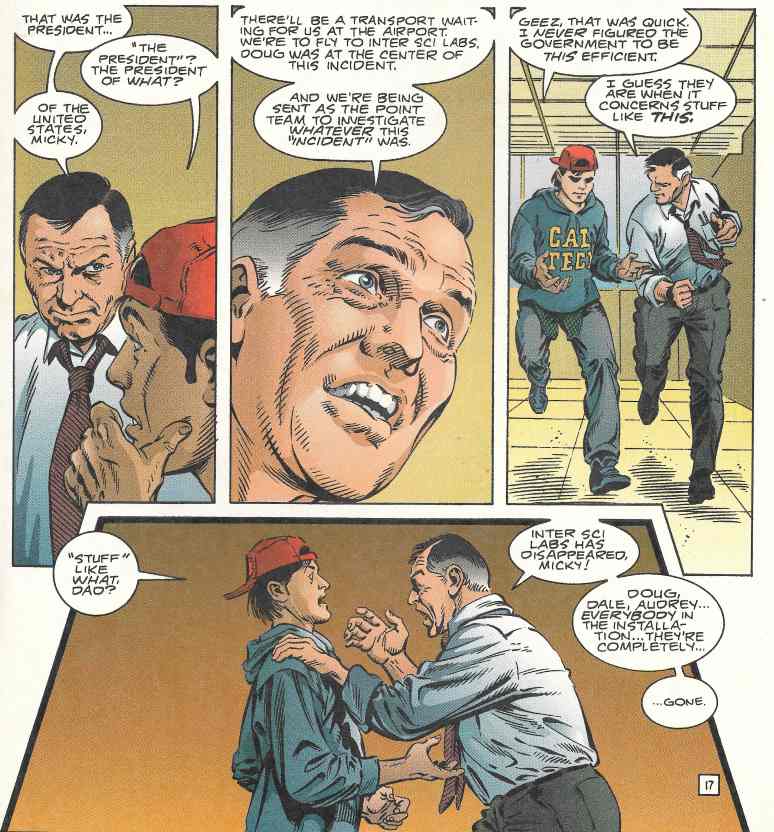 The why they are asked to investigate concerns the lab that “Micky’s” dad was on the phone to. The quake caused the other facility to vanish, taking with it all of their friends.

So the researchers and their boy apprentice fly out to check out the damaged site. 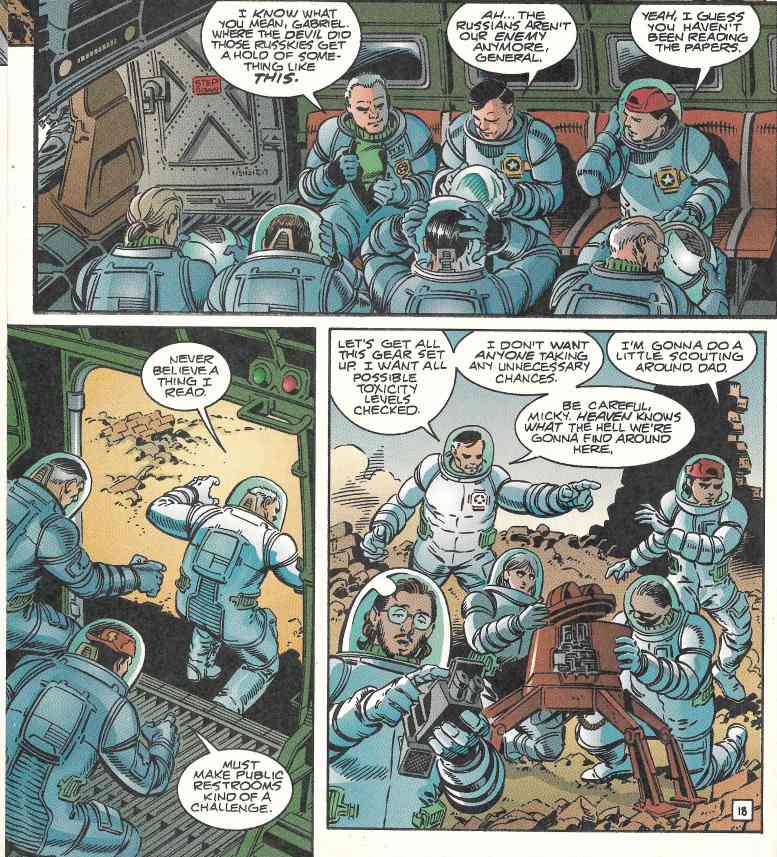 “Micky” goes off searching on his own and finds a freshly awakened Time traveled WildStar. He appears to come across one of the bad guys who had been chasing him, leading me to believe some of the others were transported back with him. 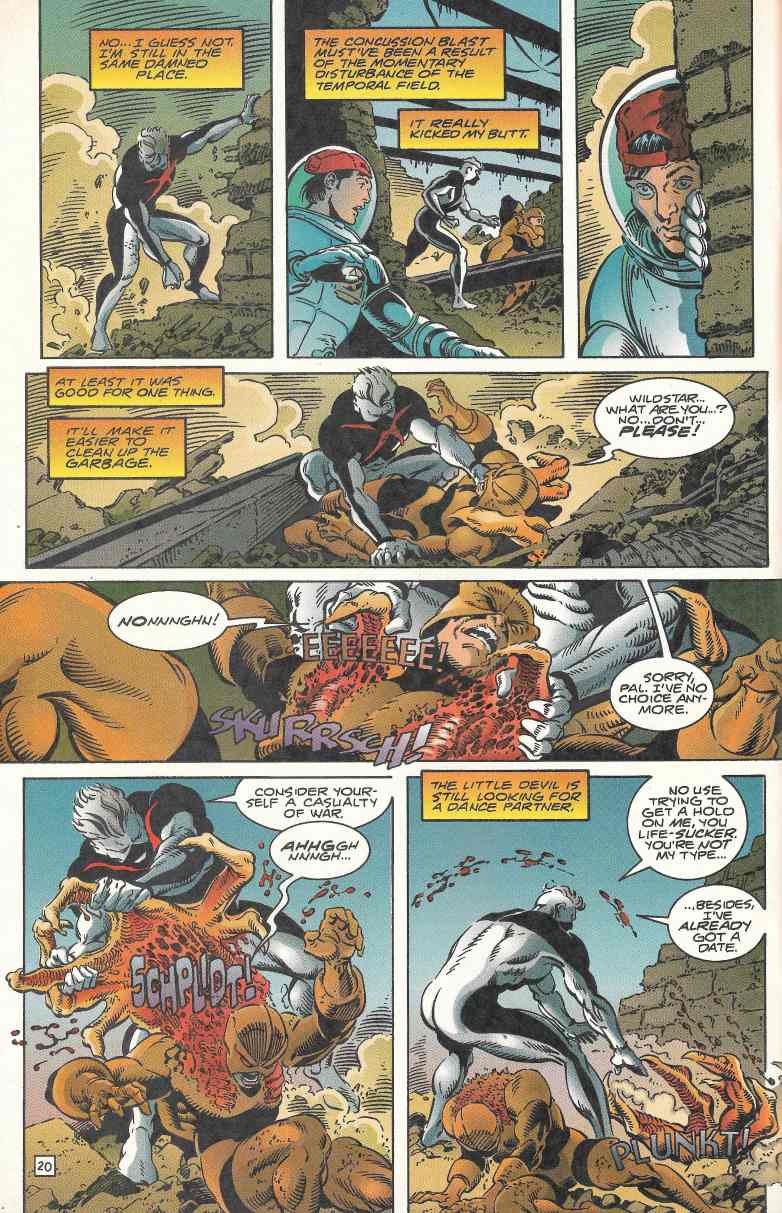 So, WildStar kills him.

And his symbiote. But when he sees “Micky,” our hero faints dead away. 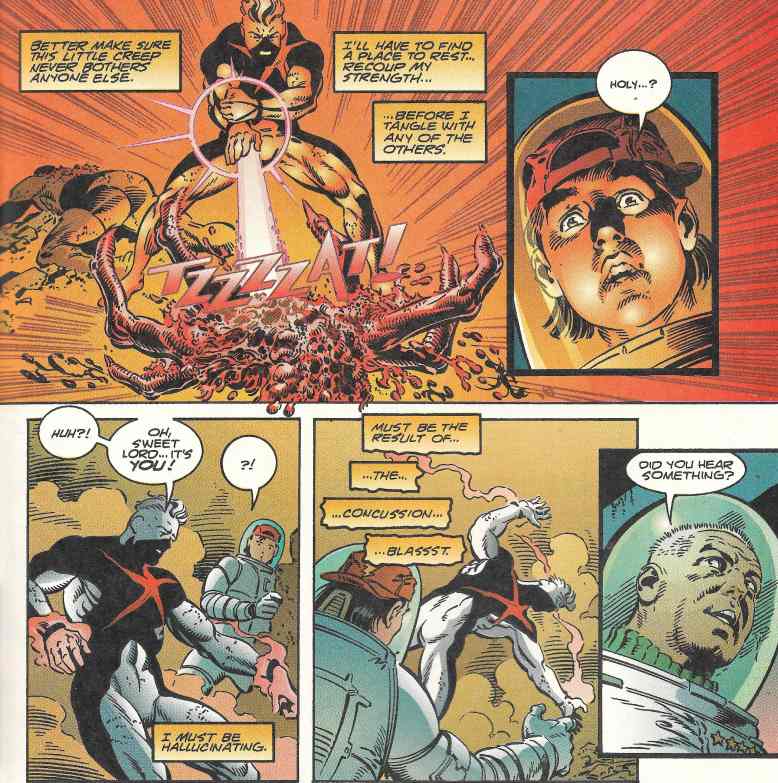 As “Micky” investigates WildStar’s body, his symbiote actually hisses at him, causing WildStar to reawaken. He knows Micky’s name and pretty much everything about the boy. Spoiler: Micky’s real name has to be Michael and WildStar is Micky all grown up. Only thing that makes sense with this series. 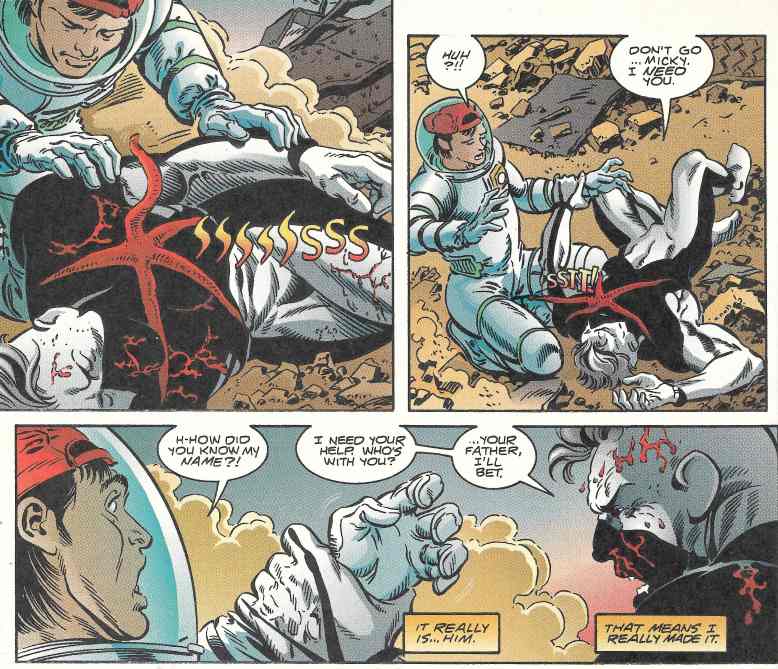 And while Micky unknowingly helps him future self out of the ruins to a place he can rest, the other members of the research team come across the time thingamajig and DeadStar’s team of marauders. Who if I don’t miss my guess will somehow end up being the members of the missing laboratory. Maybe. Only time will tell. 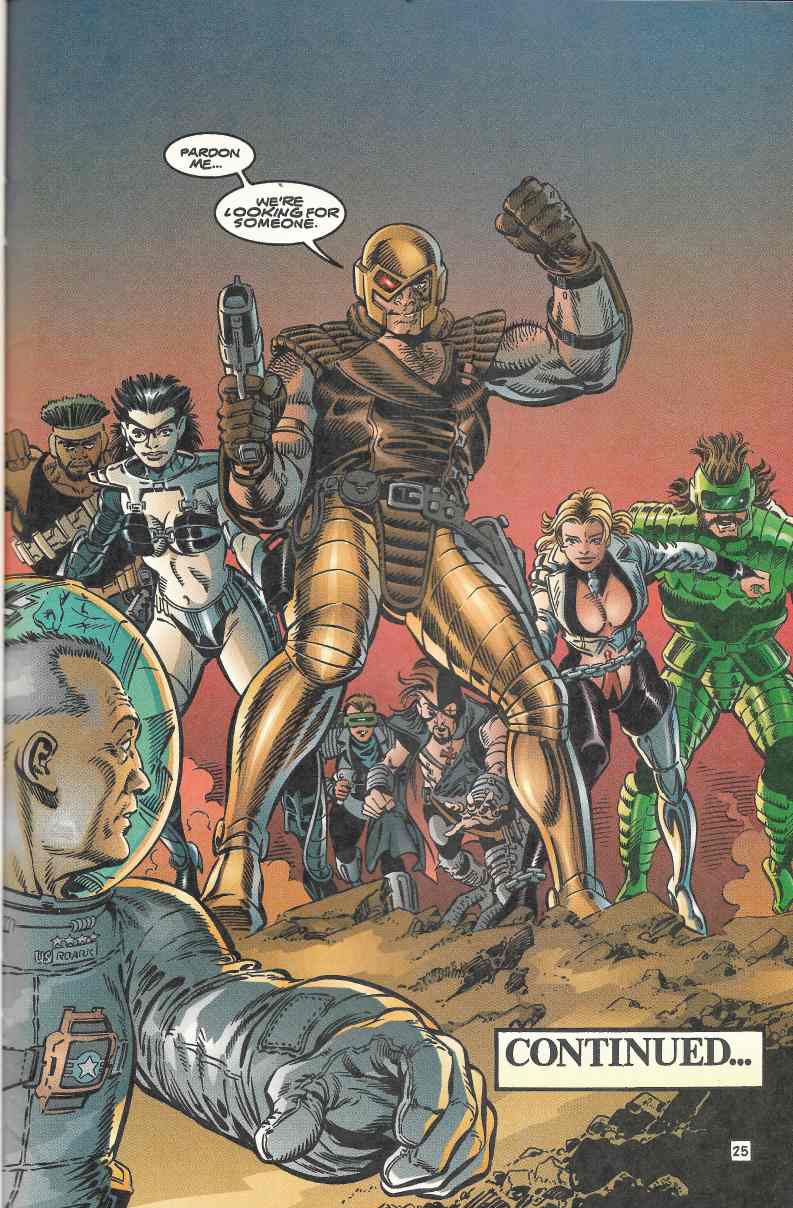 My thoughts on this are pretty straight-forward. I liked this book.

I loved the battle sequences, especially the horrific way in which WildStar would strip enemies of their parasitic power pets. In fact, even while it is SO 90’s in content, I really enjoyed the mindless combat parts.

Perhaps that has something to do with how Ordway presented it or with Gordon’s underlying story narration giving the ongoing action more of a focused, story-driven objective. This isn’t Brigade or Doom’s IV or any of a number of other first issue 90’s books where half of the page count is punching and kicking. It feels meatier. Like there is a purpose behind it all and not just ego.

As for the second-half, I was less impressed. After so stellar an opening, the slowdown was expected. The long page count concentrating on new bland characters and the method of getting Mickey to the accident site took a lot of the wind from my sails. I still wanted to see where it would go, but the mystery elements were kind of spoiled with the ghost’s appearance.

Still, this is great stuff by Ordway and Gordon. It has incredible art and a solid story featuring likable characters. Pity it only was a four issue mini and the ongoing (which didn’t feature Ordway) only lasted three issues. With all the revivals of 90’s properties these days, maybe Gordon and Ordway should give WildStar another fling?
Posted by SonOfCthulhu at 9:07 AM